Wine and lavender—these two words lead to one thought: southern France! But your thoughts don’t even have to wander as far as to the Provence region. Anne and Matthias Gaul have brought the southern French combination to Germany’s Palatinate region. They grow Pinot Noir and lavender in Grünstadt-Asselheim, creating a blue shade of purple there.

The field is humming. A monotonous, gentle sound lingers above a waving, purple-blue sea of plants. It’s a hot and dry day in July—ideal conditions for gathering nectar and pollen, obviously. There must be hundreds or even thousands of bees, bumblebees and butterflies buzzing around the flowering lavender. Anne Gaul stands in the middle and takes a deep breath. “I love coming here, even when there is nothing to do. Especially in the evening.” The scent and the humming help her unwind. A friend, and amateur botanist, has identified as many as 35 different types of butterflies in the field. And you can discover even a couple of praying mantises that get scared up during the harvest.

However, the lavender growing here is not meant just for the insects, of course. The scene looks exactly like Anne has always dreamed of: a flowering lavender field in the middle of the Palatinate. People and animals enjoy it as well—wild bees and wedding couples alike, the latter coming here for a photo op. The place is a piece of southern France in Anne’s new home—a piece of Provence she processes into oils, soaps and beauty care products after the blossom, preserving it for winter.

Anne is originally from France. She was born and raised on the Alsace Wine Route. Her parents owned their own vineyards and farmed them as a side business. “I remember that my grandmother had lavender sachets all over the house—in the wardrobe against moths or in the bedroom because of the calming scent. The whole house smelled of soap and lavender. It’s a scent that always brings me back to my childhood straight away.” Wine and lavender—she can never escape this combination. That is why she is drawn to Provence again and again. She even went there regularly while she lived in Bonn for a few years after studying linguistics. 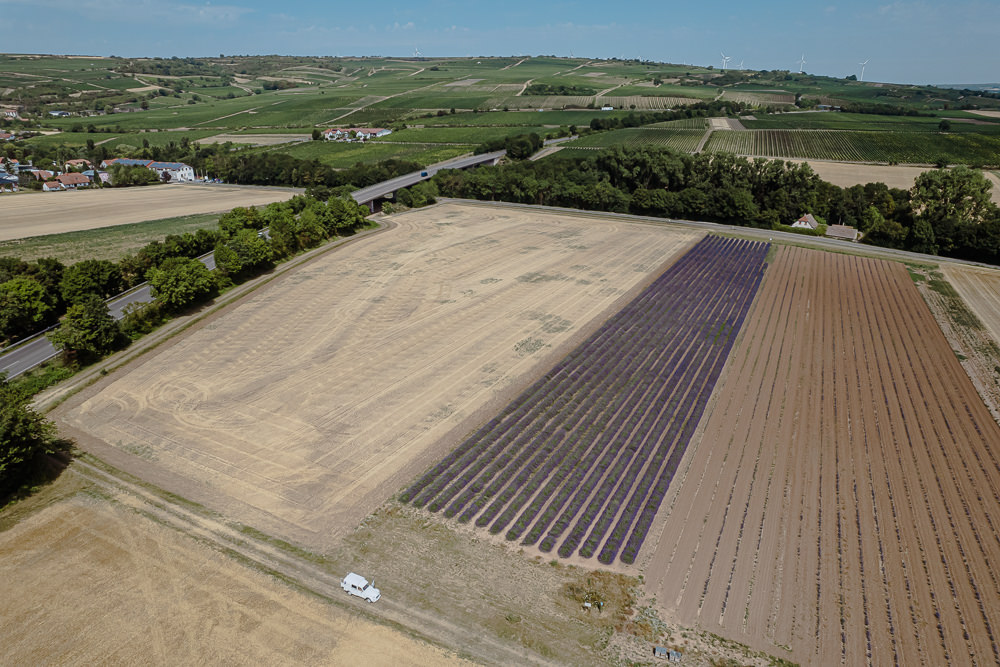 A wave of purple in the Palatinate: the BlauSinn lavender fields. 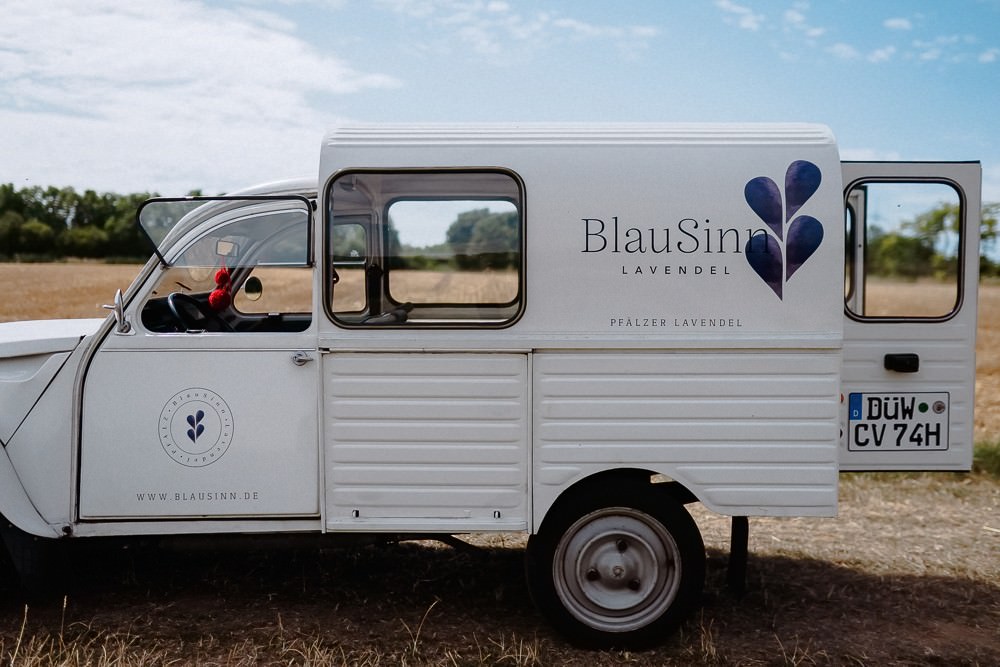 Taking off to the field in a deux-chevaux Citroën. 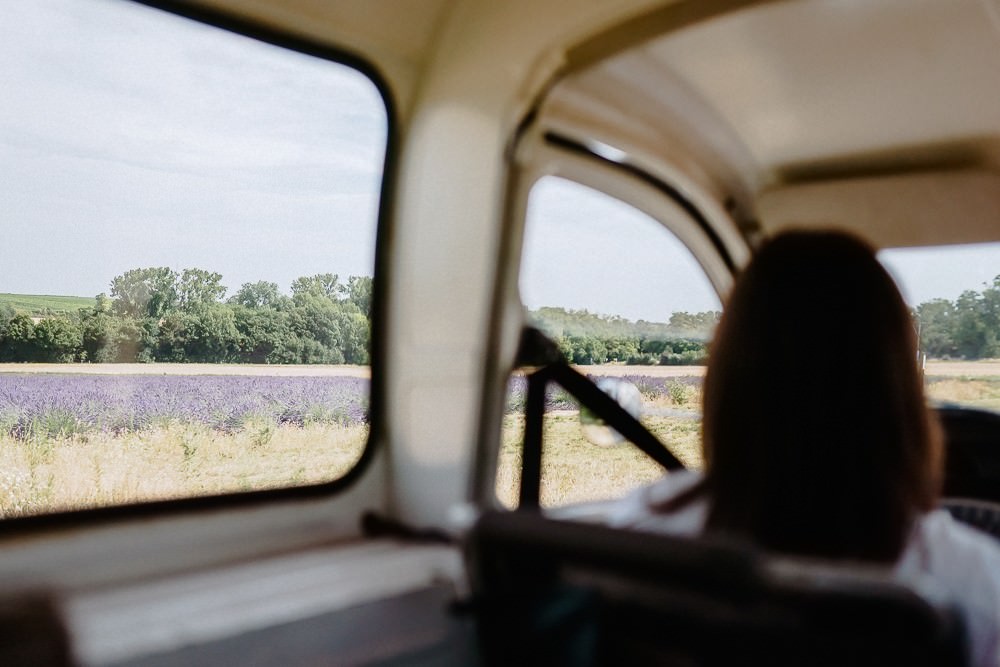 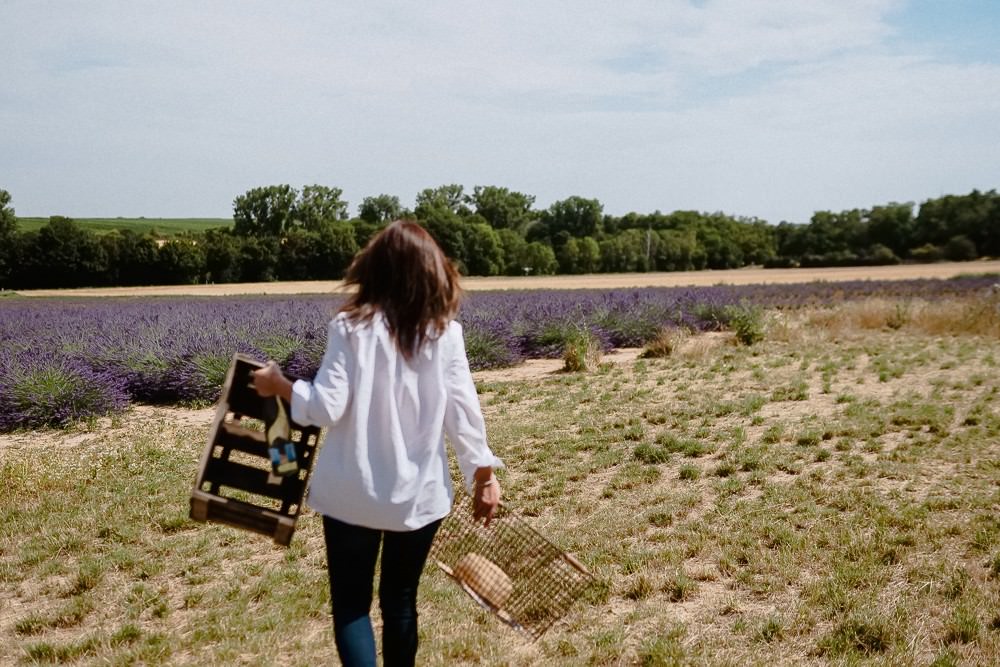 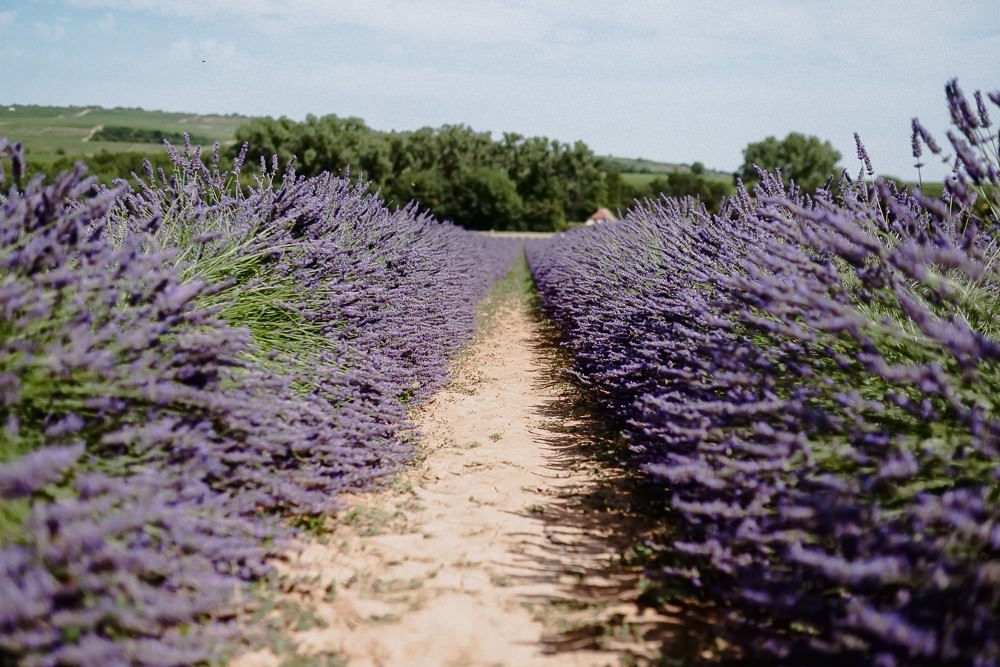 Humming and buzzing between the lavenders. 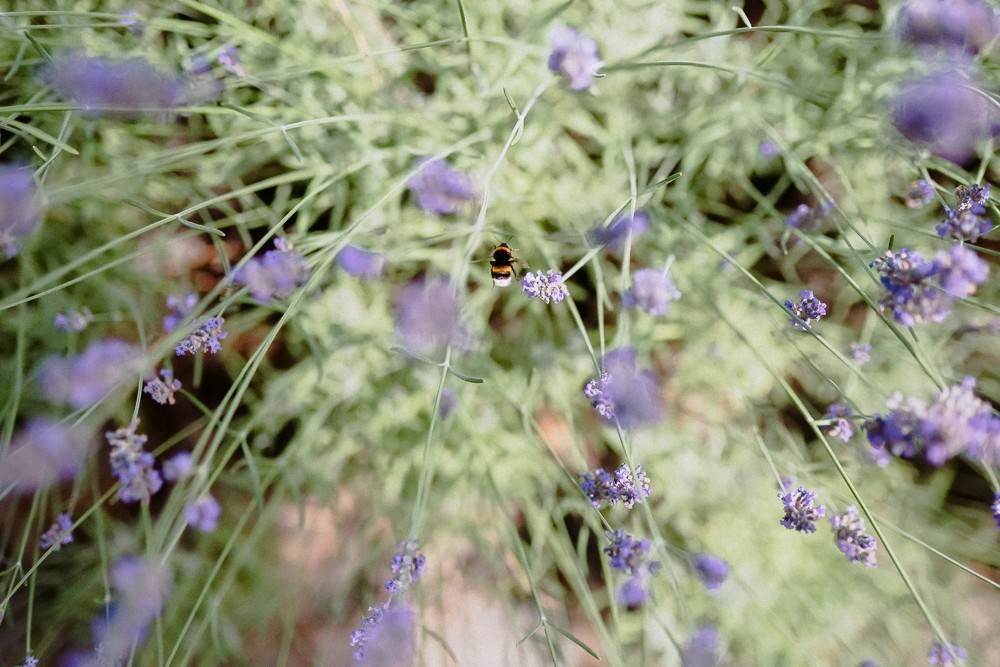 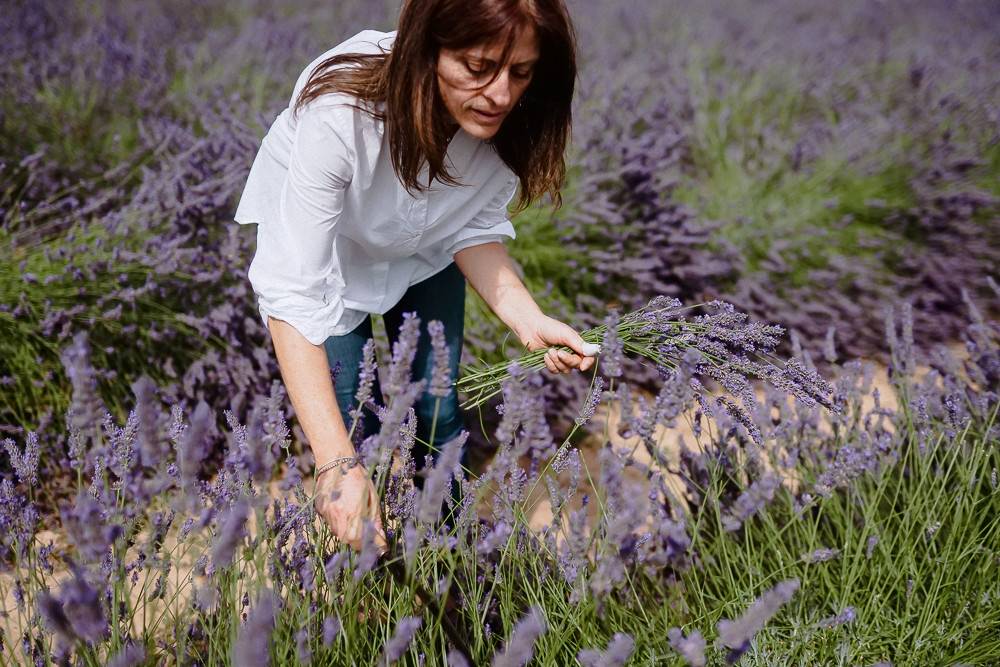 When the plants are in blossom Anne only harvests a few tufts for small bouquets and lavender sachets. 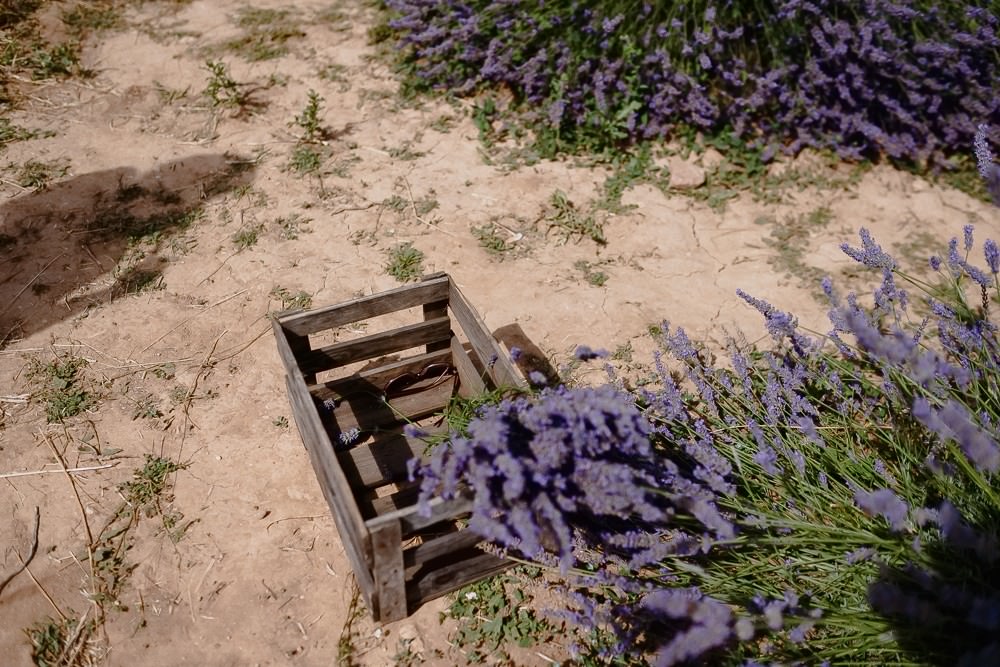 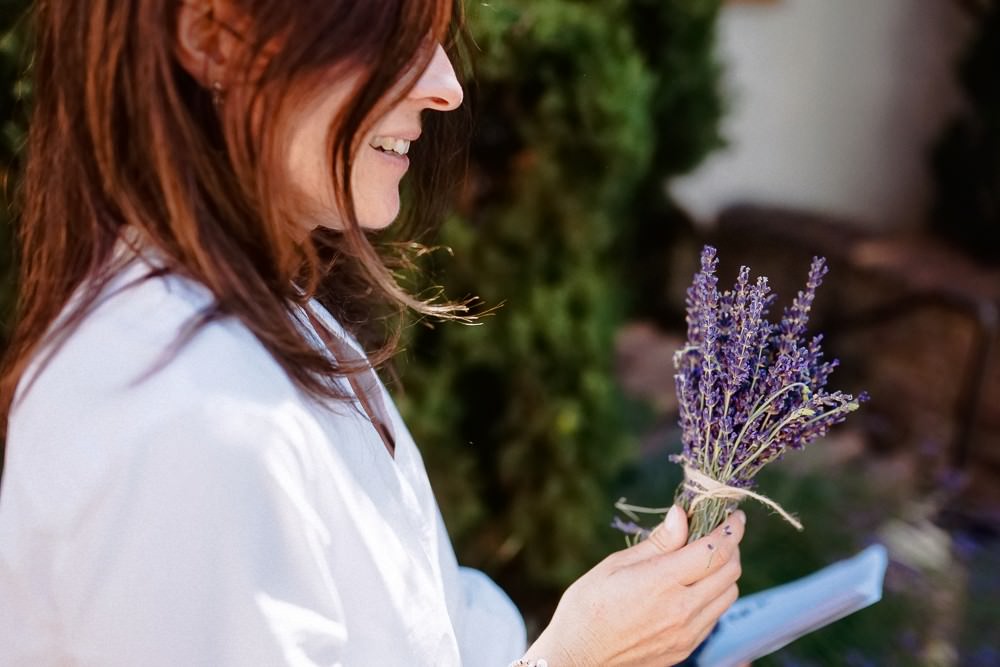 Her love of southern France finally brought her together with her husband. Matthias Gaul also has a soft spot for the country next door. “I remember our first conversation was actually about Provence,” Anne says and laughs. She was amazed when she visited him in the Palatinate for the first time in 2010: “I didn’t expect to find something reminiscent of the Mediterranean in Germany. I found it so beautiful and immediately felt at home.” Not long after, she moved to Grünstadt-Asselheim. “Well, vineyards are hard to transplant.”

If Tempranillo grows here, why not lavender?

Matthias is the fourth generation to run his family’s wine-growing estate. “We don’t have a large area. So we can’t go for quantity but have to offer quality,” he explains. The barren, mineral-rich soils around Grünstadt-Asselheim and the Mediterranean climate offer great conditions for this. They like to experiment, too. Matthias has been growing Tempranillo, the most important grape variety in Spain, here for several years. And above all Pinot Noir.

The winegrower likes to break new ground—also in the way the wine is cultivated. His Pinot Noir grows in the close-planting manner, in low rows set closely next to each other, as is customary in Burgundy. Three times as many vines grow on the plot as in the surrounding area. “We cut the grapes in half in summer so that they hang loosely. That way they don’t burst open and rot.” Each vine bears fewer grapes and produces a higher quality with this type of planting. The vine has much less to work and also needs less water—an advantage not to be underestimated in dry years.

The estate is located in the centre of the village and can hardly be missed. A tower and archways are eye-catching; two high cypresses at the entrance as well as olive trees and oleanders create a Mediterranean atmosphere. In front of the courtyard there is lavender everywhere. The shrubs at the entrance have become a bit woody over the years, “but I can’t bring myself to replace them,” Anne says. She and her husband dearly love these plants. Every trip to southern France and every visit to lavender growers or distilleries spurred the thought Anne had in her mind: “If Tempranillo grows here, why not lavender?”

They planted the first lavenders on a small plot of land on the outskirts of the village, directly behind an old sandstone wall back in 2014. Then they tested which varieties felt particularly at home here and how they were suited for bouquets and oils. They kept adding shrubs every year. Since 2019, their lavender has been growing on an area of two hectares. And another field was planted as recently as in March 2022. “We did that on my birthday,” Anne says.

Anne uses a deux-chevaux Citroën, coloured in a creamy shade of white, to head out to the field. Jolting and jerking the stylish car starts to move. It trundles along field paths to the outskirts of Grünstadt-Asselheim reaching the 200-metre-long field that slopes gently downhill with the vineyards as a backdrop. At the other end, across the road, an old building juts out from behind tall bushes. “That’s the Krausmühle mill, where they used to mill grain,” Anne explains. They bought the 300-year-old building in 2020. The estate’s own distillery may one day be housed in it. But they are already using the mill—with its old, thick-walled stables and the Eisbach brook rippling along behind the building—for small events and festivities.

A number of beehives peek out at the other end of the field. They are owned by friends—amateur beekeepers. The bees produce ‘honey from the lavender field.’ Anne takes an old sickle and cuts some tufts of lavender. It is not yet harvest time. As long as the plants are in blossom, she only takes a few tufts for small bouquets and lavender sachets. They will probably harvest at the end of July, much earlier than the year before, which was a rainy and sunless one. “This year we have southern French-like climate here,” Anne says and smiles somewhat indecisively. The dry heat is good for her lavender but bad for her husband’s wine. The grapes like it a bit cooler and need rain from time to time.

Lavender is a hardy plant. It makes low demands on the soil, copes well with heat and needs hardly any water—an ideal plant in the light of climate change. “We don’t have to fight any pests either, just pull the weeds now and then. It’s completely organic.” Which is why they have applied for certification. They will harvest the young field by sickle. For the large field, they will use a 40-year-old machine though. The lavender blossoms remain on the harvested plants on site as they dry—just as it is traditionally done in France. They drive the harvest south to France after five days. The lavender is distilled by steam there and then processed further—to solid and liquid soap and to oils and beauty care products. Anne sells the products in the winery’s salesroom under her BlauSinn label. ‘Blau’ literally means ‘blue’ and refers to the blue shade of purple the lavender shrubs spread through the place.

The couple work hand in hand. She is responsible for the lavender and he for the wine. But they support each other. They both help out wherever a hand is needed or advice is required when it comes to their little piece of southern France in the northern Palatinate—for wine and lavender. 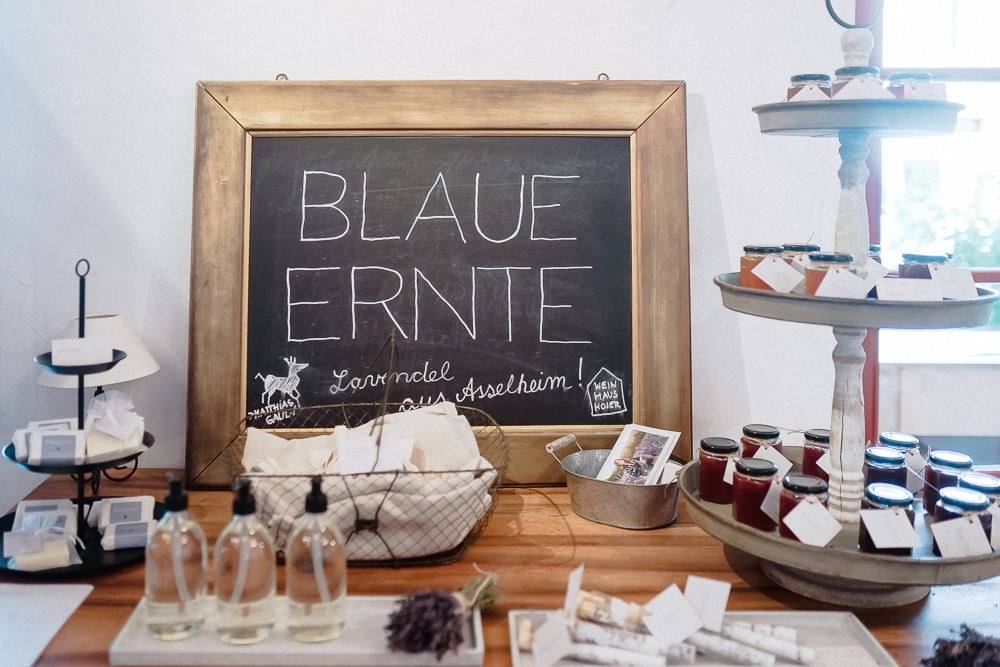 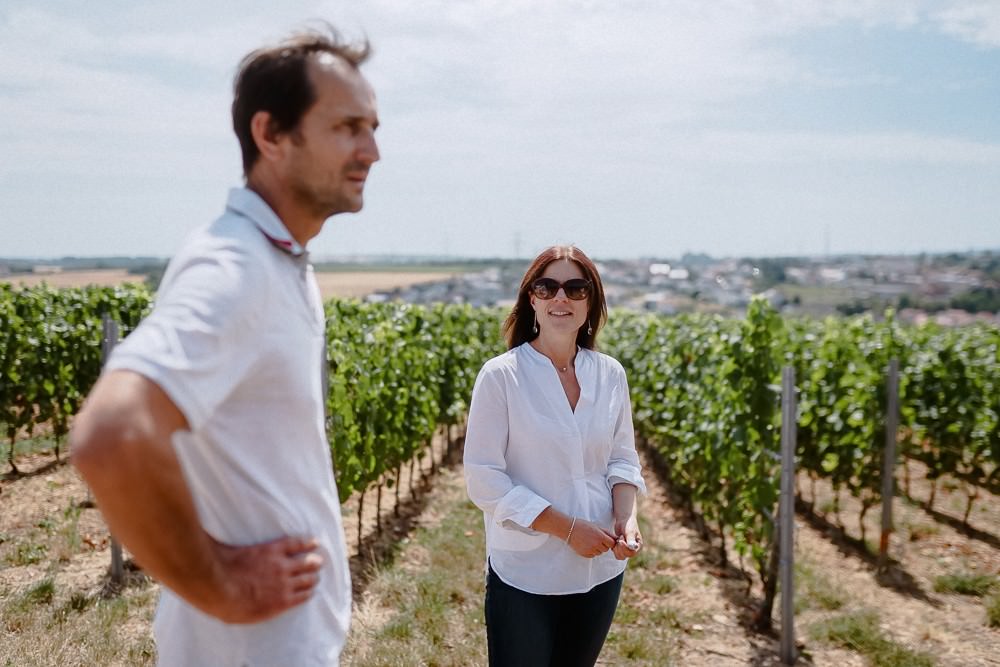 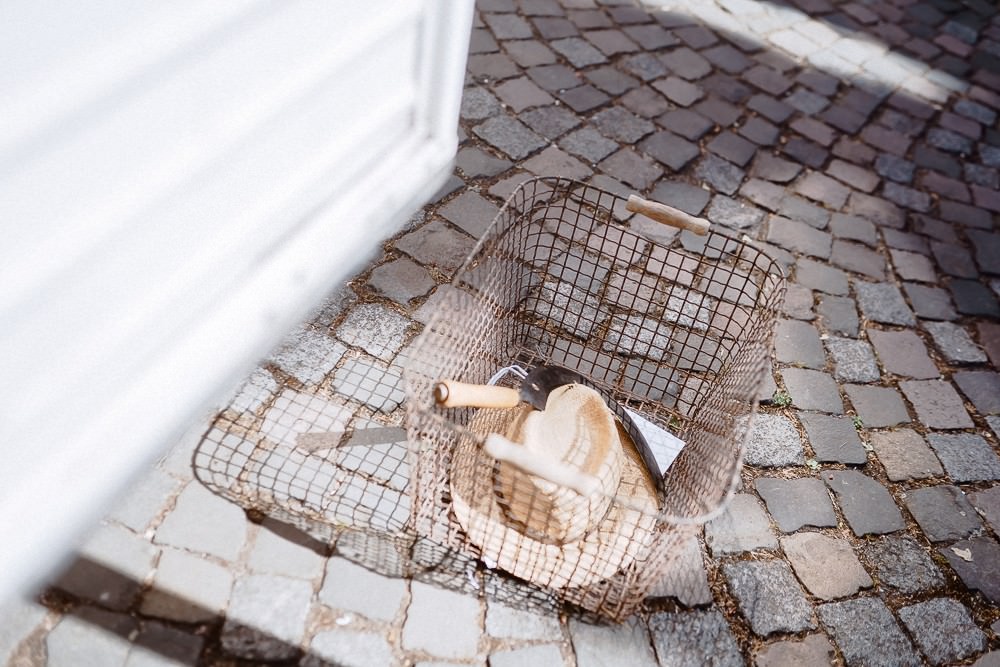 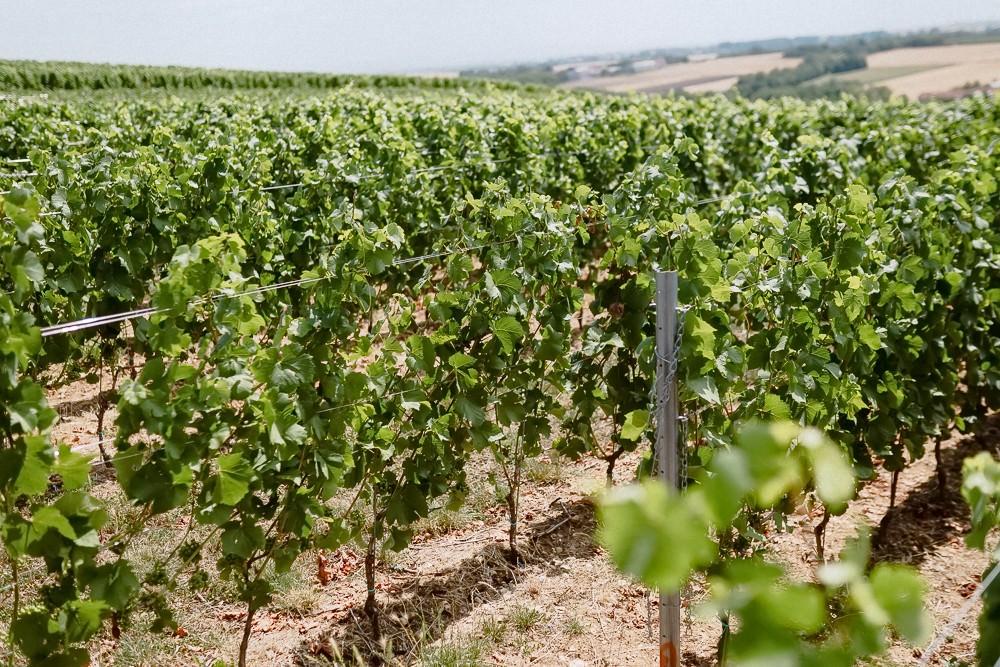 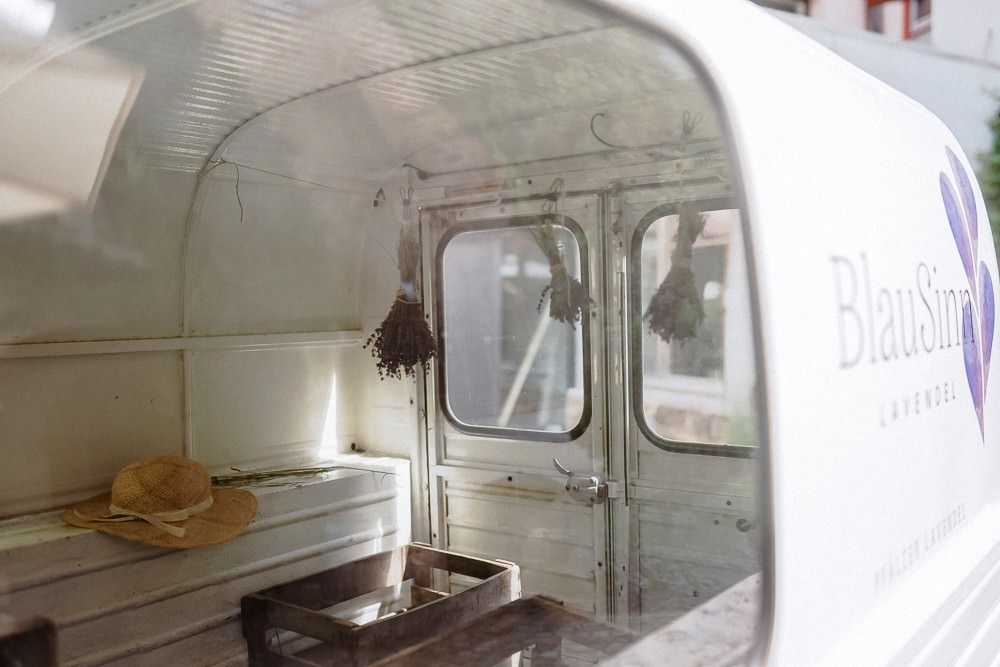 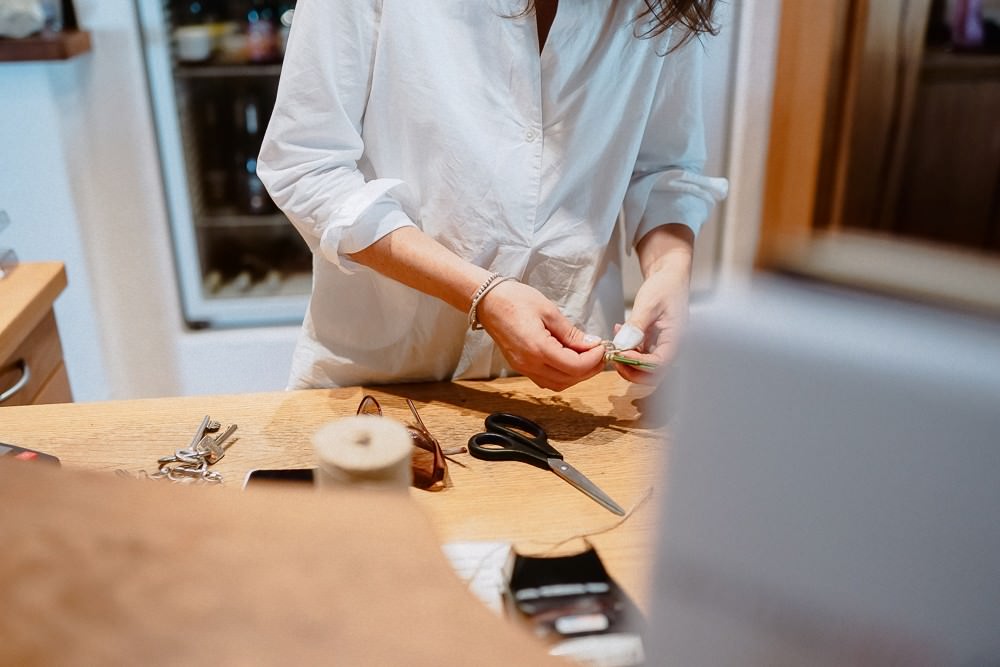 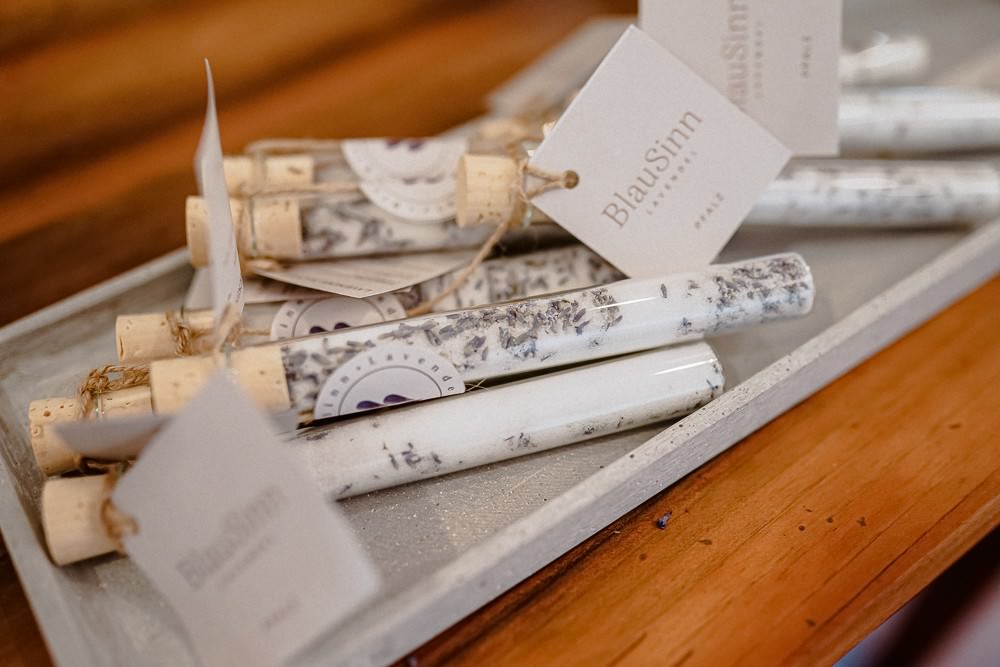 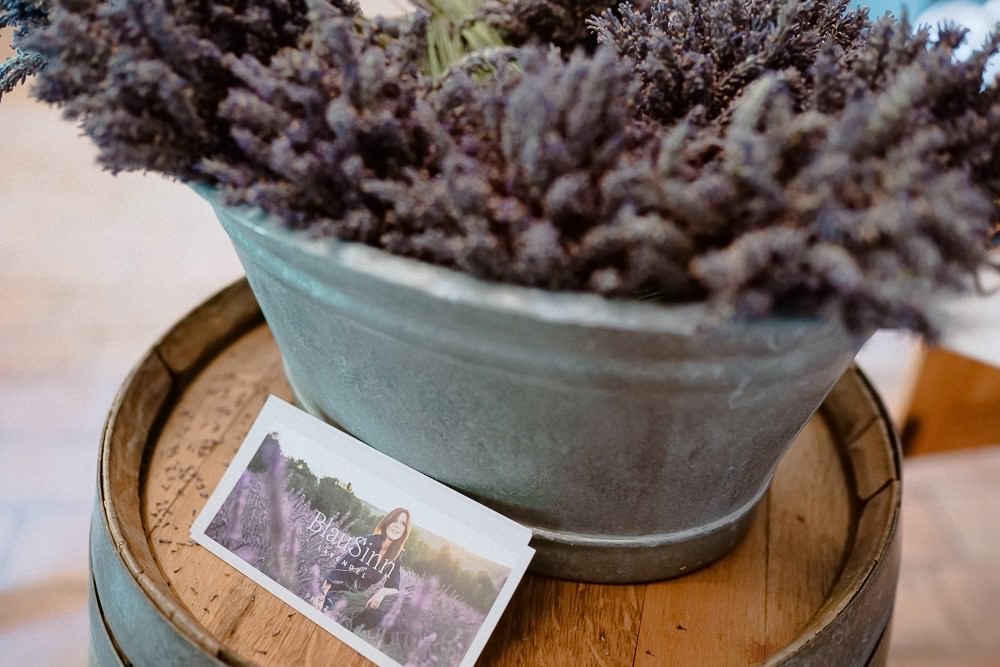