A leafy environment with a thousand voices: The Dannhecker Wald forest offers grounds for peace and relaxation—not only for people. Also many birds brood and sing in the area situated between Walldorf and Sandhausen. One of the reasons that this is possible is because of Harald Kranz, who takes care of almost 100 nesting boxes. And also because of a bit of chaos.

Death precedes new life in the forests… The upper part of the beech tree is dead. Standing at the side of the path, it looks somewhat pitiful. However, the roundish holes at its top indicate that a number of woodpeckers hammered their tree holes into the soft, dead wood over the past few years. Three tree holes, one below the other. In many working forests, these “woodpecker flutes” fall victim to the saw sooner or later. But on this beech tree, the white outline of a bird is emblazoned. It is a message for the forester: Please leave this tree as it may be a place for breeding.

The Dannhecker Wald forest is situated in the Rhein-Neckar-Kreis district between Walldorf and Sandhausen, some ten kilometres south of Heidelberg. Trippers and residents go for a walk on this mild spring evening, searching and finding peace and relaxation. They amble along on the embankment next to the Hardtbach brook that runs through the forest or they enjoy the picturesque view from the roofed Lutherische Brücke bridge, after which writer Arnim Töpel named a detective novel written in dialect. The birds offer a beautiful choir of many voices—for free: moaning shouts from the great spotted woodpecker every now and then and the robin redbreast up in the branches sings its tinkling song. And soon, the oriole will produce its fluting song, hidden well up in the tree canopy. The bird with the striking-yellow plumage is called “Vogel Bülow” in the German vernacular and in French it is known as “Loriot”, which Vicco von Bülow, the great German comedian, chose as his pseudonym.

Is bird life still in order here? Harald Kranz wouldn’t put it this general way, but from a conservationist’s point of view of, the Dannhecker Wald is a town forest that can act as quite good a model. Because death is not cleared away straight away and because a little chaos is allowed here. “Unfortunately, dead trees conflict with people’s mania for order,” says the chair of the Leimen-Nußloch local group of the German Nature and Biodiversity Conservation Union (NABU). And many foresters consider dead wood a safety risk for visitors to the forests. Dead wood, though, offers birds a place to raise their offspring in a protected environment and provides a home and food for innumerable insects and worms, which, in turn, is vital for many other animals. 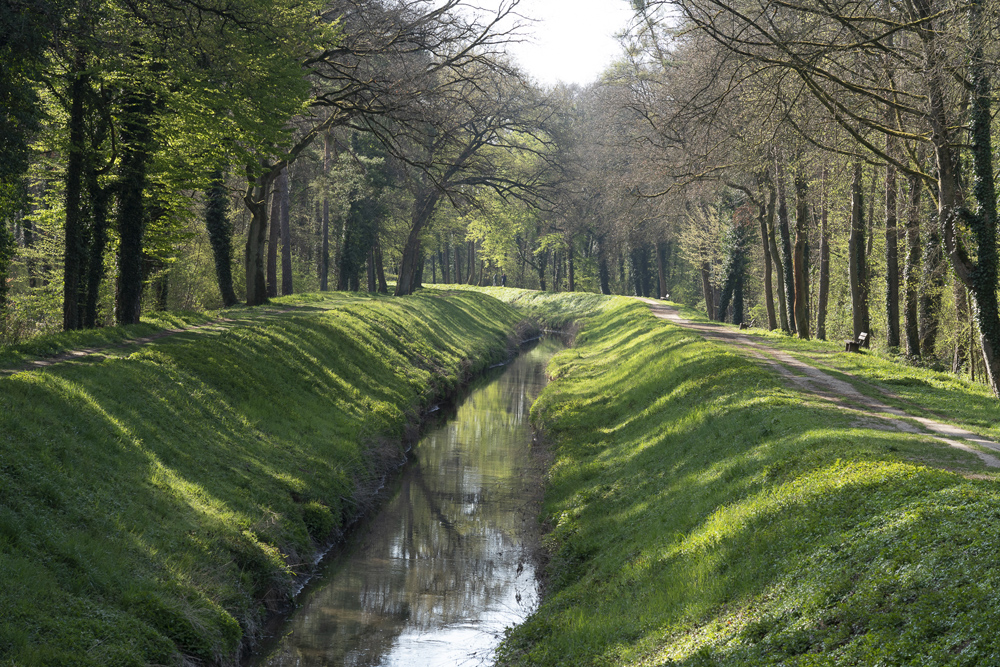 The Hardtbach brook that runs through the forest 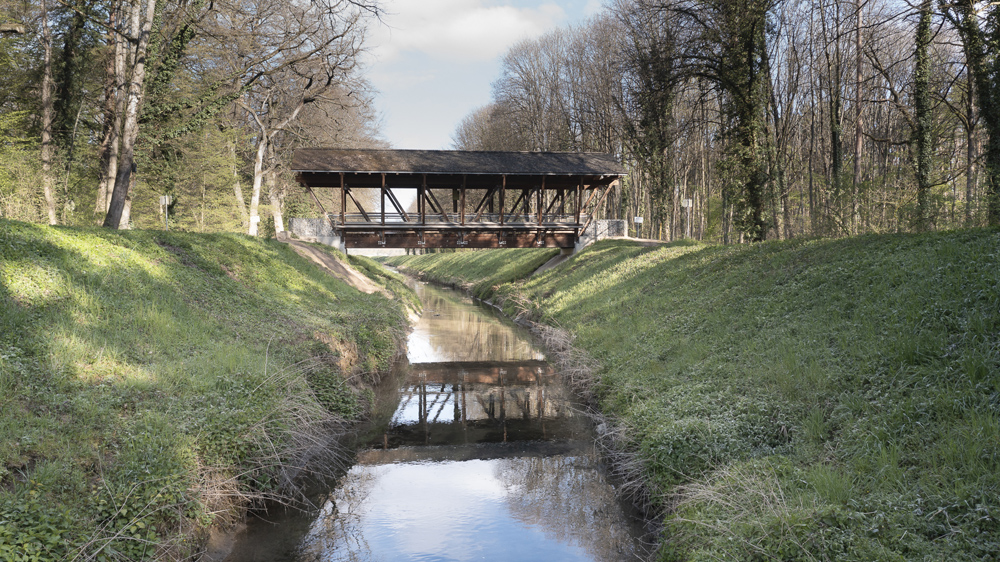 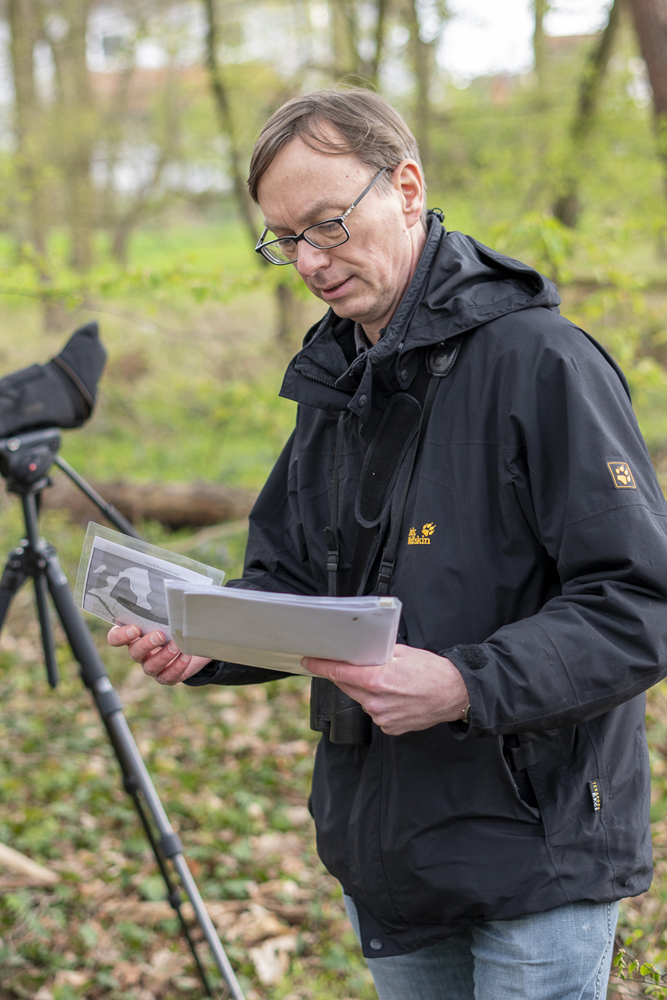 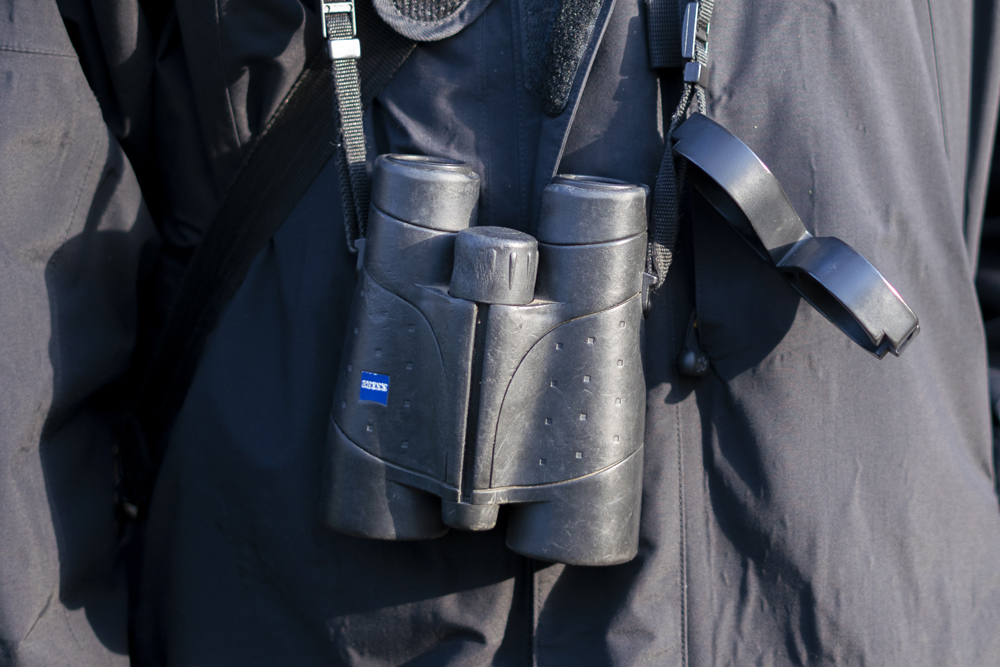 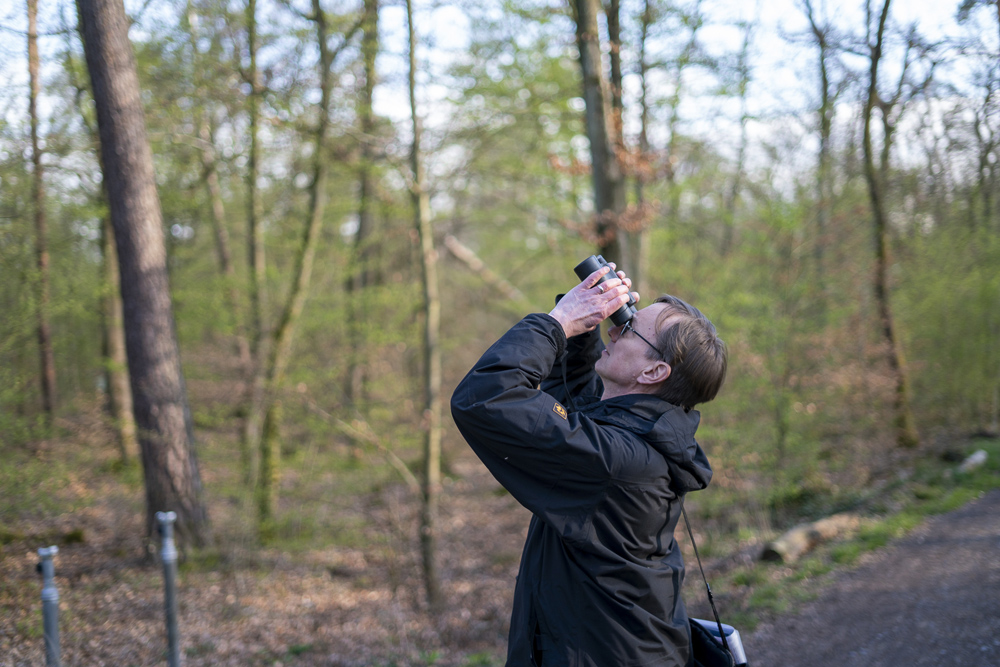 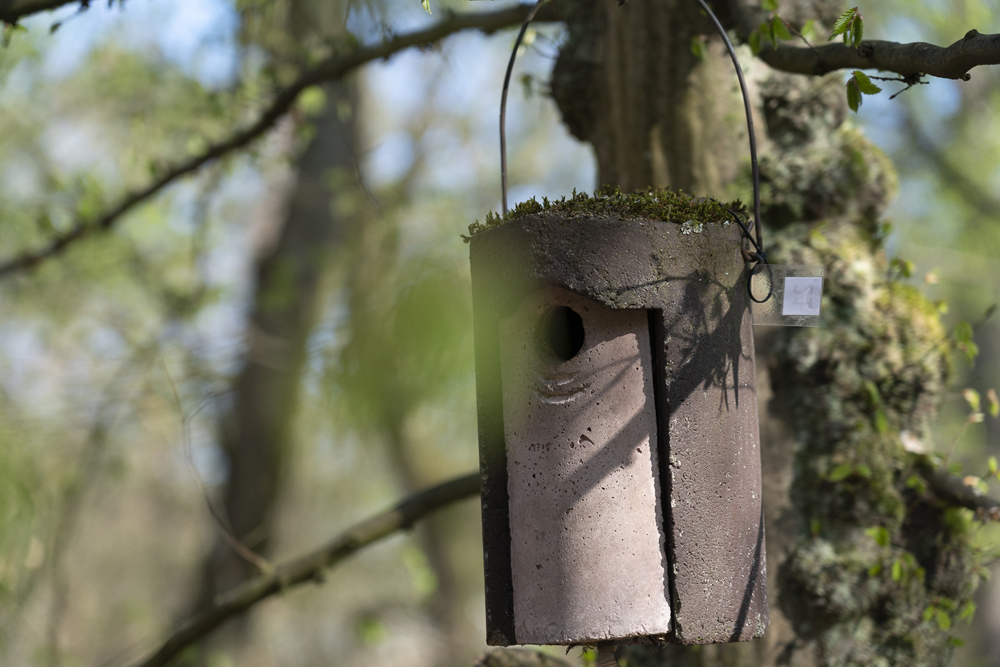 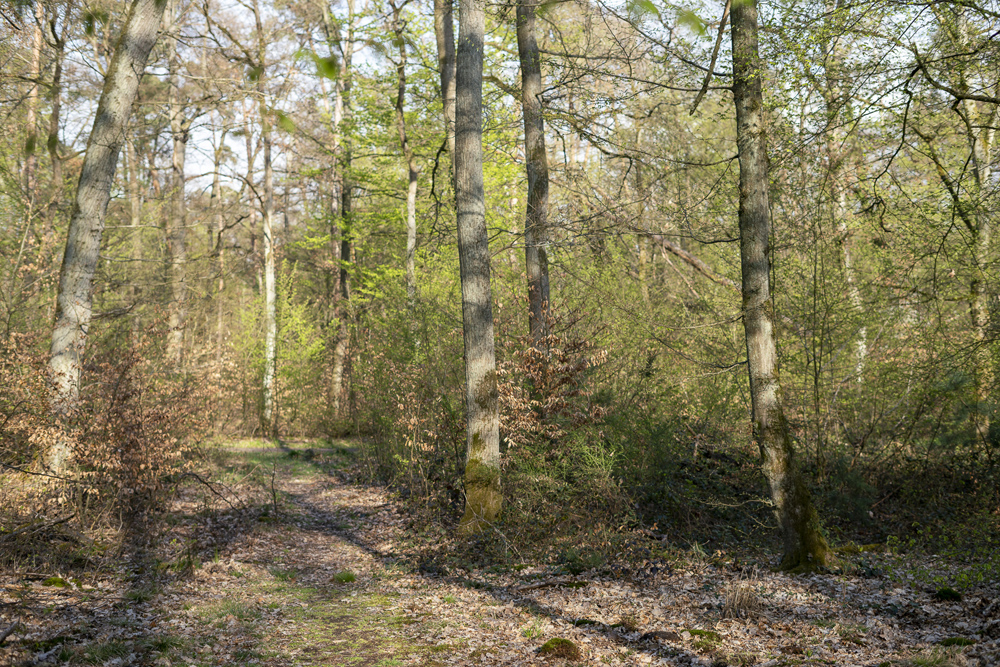 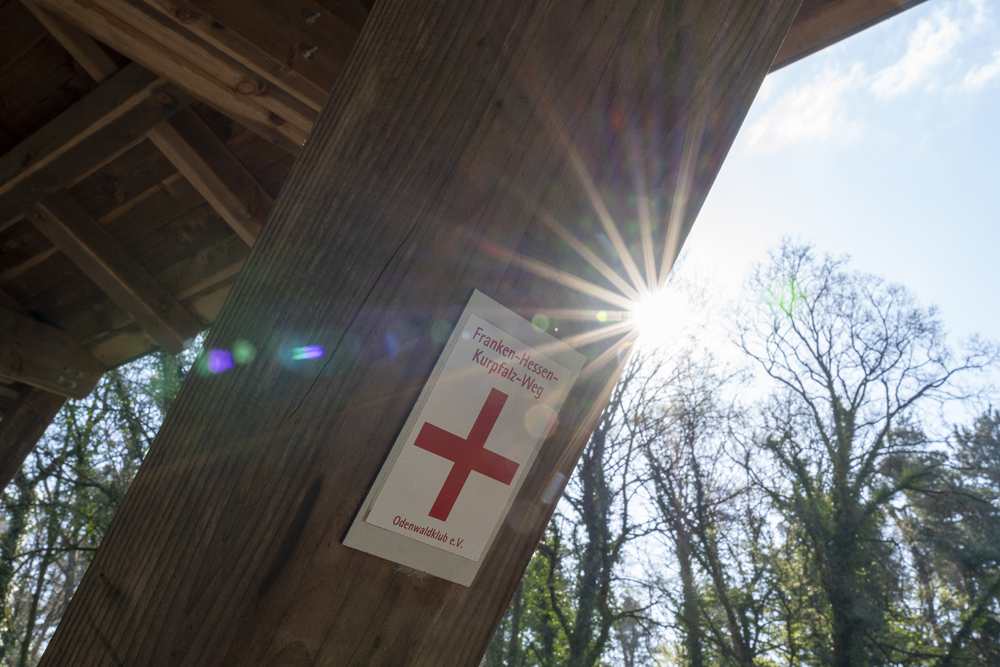 Harald walks mindfully through the forest. He pauses every now and then, lets his gaze wander through the crowns of the trees, where the first fresh green of spring breaks through. Once you take some time and space and look and listen into the forest, you’ll discover more than just a few trees. For example the extended drum roll of the black woodpecker in springtime, if you’re lucky. This biggest native woodpecker species with raven-black feathers and a red crown is an important master builder—for other species as well. His spacious caves, once left, can become home to the rare stock dove in the following years, for example.

The “housing market” in the forest is tight

The professional molecular biologist spends most of his time in laboratories and offices, but after work, he dedicates his time to his immediate environment: Harald takes care of almost 100 nesting boxes in the Dannhecker Wald. If you keep your eyes open, you’ll find them on many trees along the paths. Harald keeps a record about which birds move in in springtime, takes out abandoned nests in autumn and cleans the boxes. And he meddles a little in the chaos, because the “housing market” in the forest is tight. Tits, nut hatches, starlings: They all brood in tree hollows and therefore depend on the holes built by woodpeckers or on nesting boxes put up by humans. Climate change has caused many of them start brooding earlier, in some cases even at the beginning of April.

Bird species like the pied flycatcher don’t get a look-in. This species belongs to the birds that migrate over long distances and spends the cold season in Africa. Reaching Germany after a few thousand-kilometre journey over the Sahara Desert, the Mediterranean Sea and the Alps, the 13-centimetre small, emaciated bird finds many of the brooding holes occupied upon its arrival in the middle of April. Great and blue tits stay here over the winter and in mild springs they can proceed to action earlier, occupying many boxes. “Once they have built their nests and sit on the eggs, the show is over,” Harald explains.

The pied flycatcher is therefore one of the losers of climate change. The German Bird Conservation Council put the species on the Red List of threatened birds as “endangered.” Harald’s predecessor, Günther König, had found only a single breeding couple in the Dannhecker Wald in 1998 and thought out a trick that Harald uses to date: Every year before the breeding season begins, he removes the front panels of 15 nesting boxes. This makes the boxes useless for breeding and tits and other “early breeders” have to look for alternatives. Only after the first pied flycatchers of the season have been registered in the ornithological databases as having returned to Germany, Harald goes into the forest and puts the front panels back on the boxes: ready for the pied flycatchers to move in and bring up their offspring well, while the competition already rests on their eggs elsewhere. The annual number of breeding pied flycatchers in the Dannhecker Wald has risen to ten couples on average, estimates Harald.

This little passerine is, however, not the only species in Walldorf that is on its way up. The town is proud of its stork marshland—a meadow at the edge of the forest, east of the town and directly next to the Dannhecker Wald. Some 20 white storks are on the marshland or on their nests this evening. Among them, a number of egrets as white as snow stand frozen and wait for prey to come close to their feet. At a few metres’ distance the three pairs of hare’s ears peep out of the high grass.

Harald thinks: The Germans should take a leaf out of the book of the British much more often. “Birdwatching” is a national sport there: Binoculars are natural equipment for people on the Island, when they walk into the countryside. “You can only enjoy it properly, when you can watch properly.” But even without binoculars it is a fact that: The forest does something to the people. It allows them to breathe freely and unwind. Walldorf, the “Dorf im Wald” (literally: village in the forest) owes its name to the surrounding green belt. “You just have to enter the woods and sit down somewhere for half an hour,” says Harald, “I promise you’ll feel better afterwards than before!” 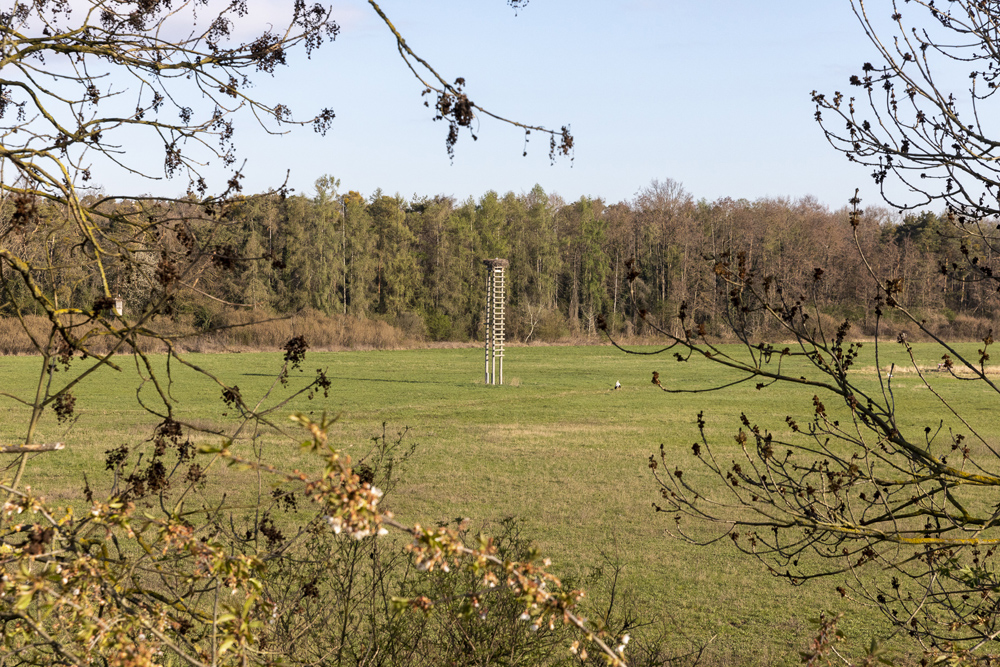 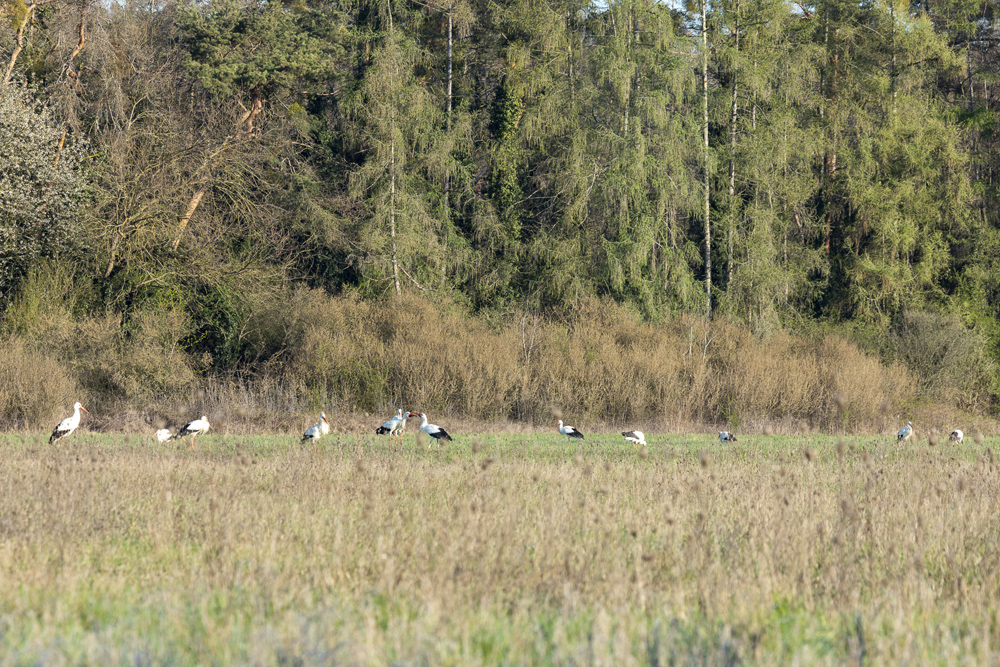 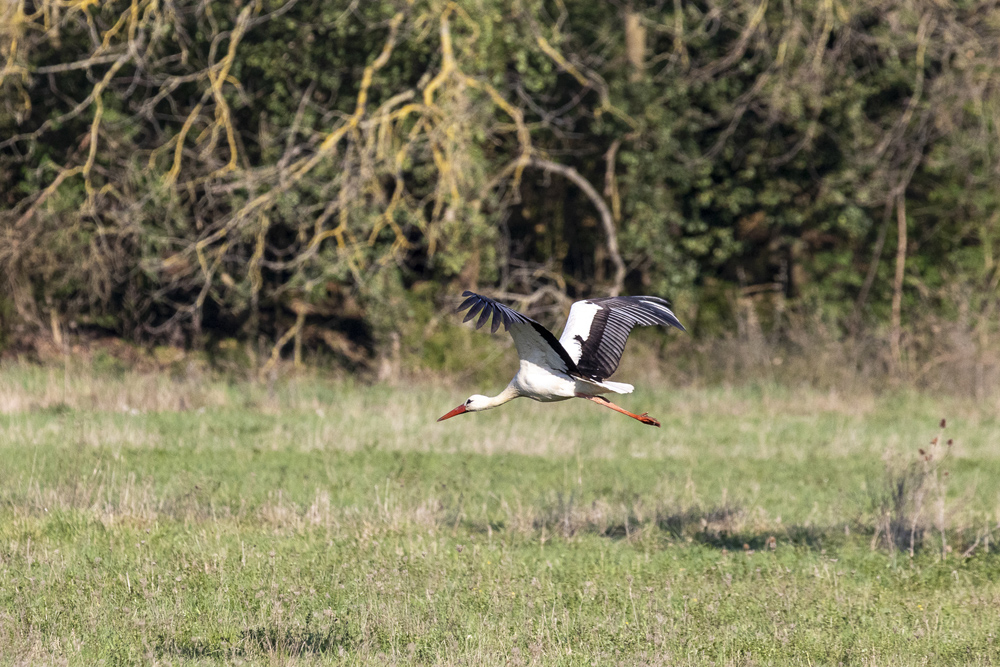 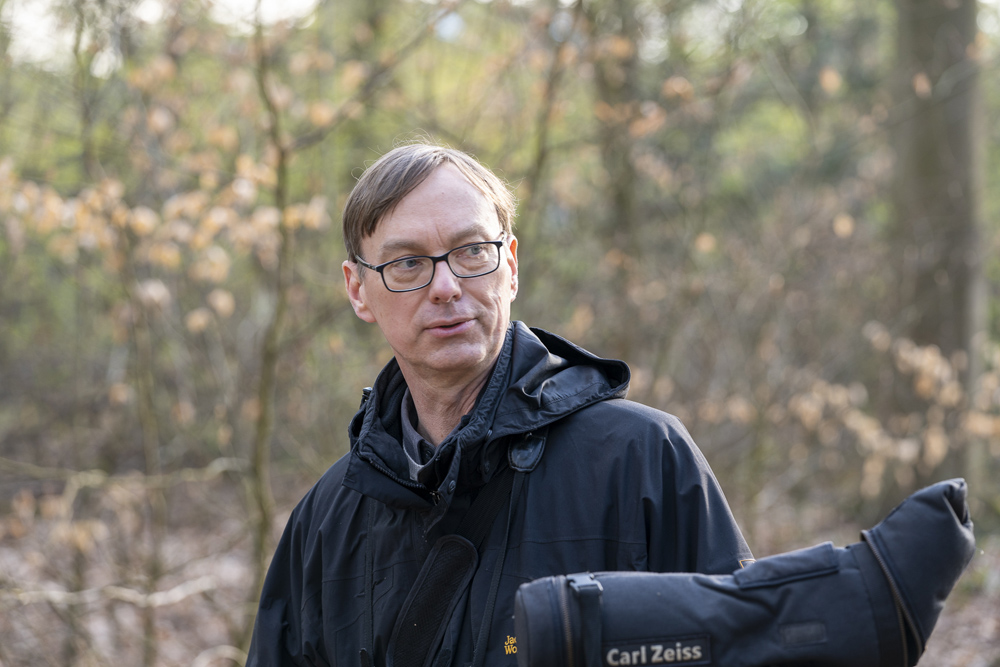 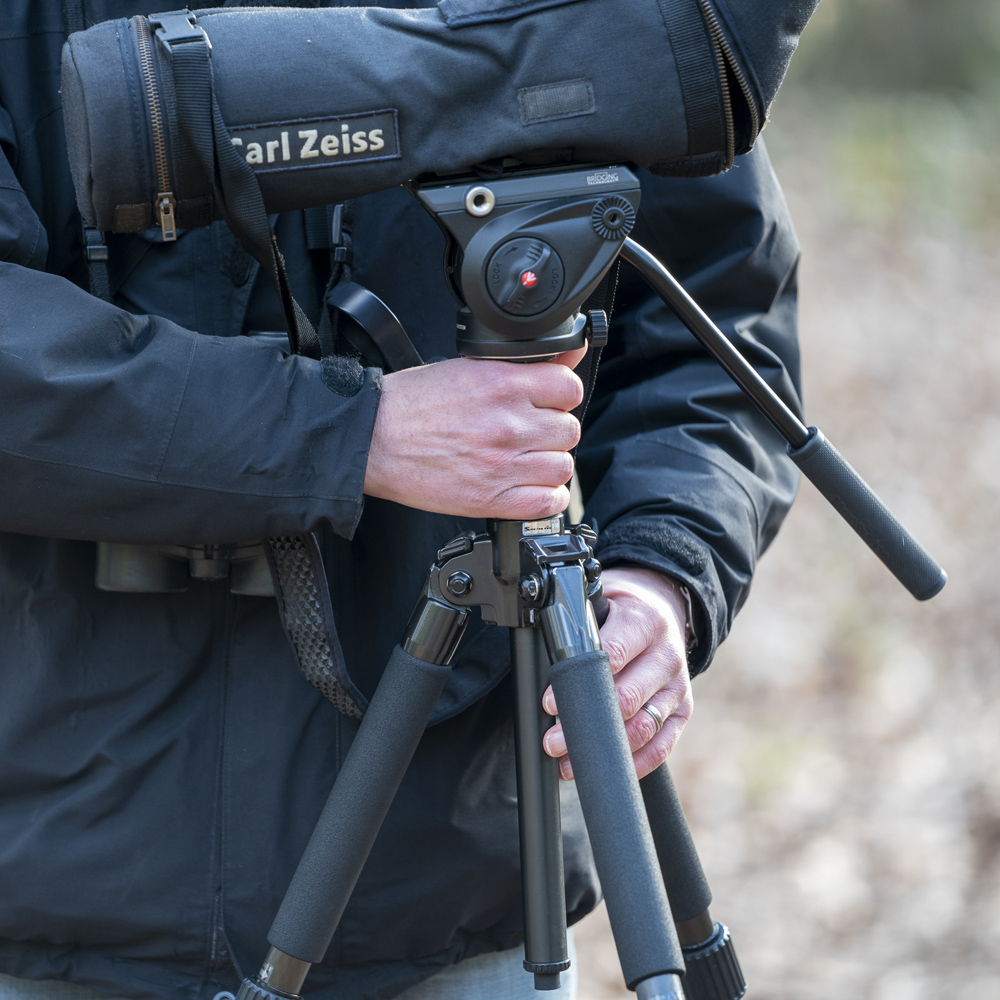 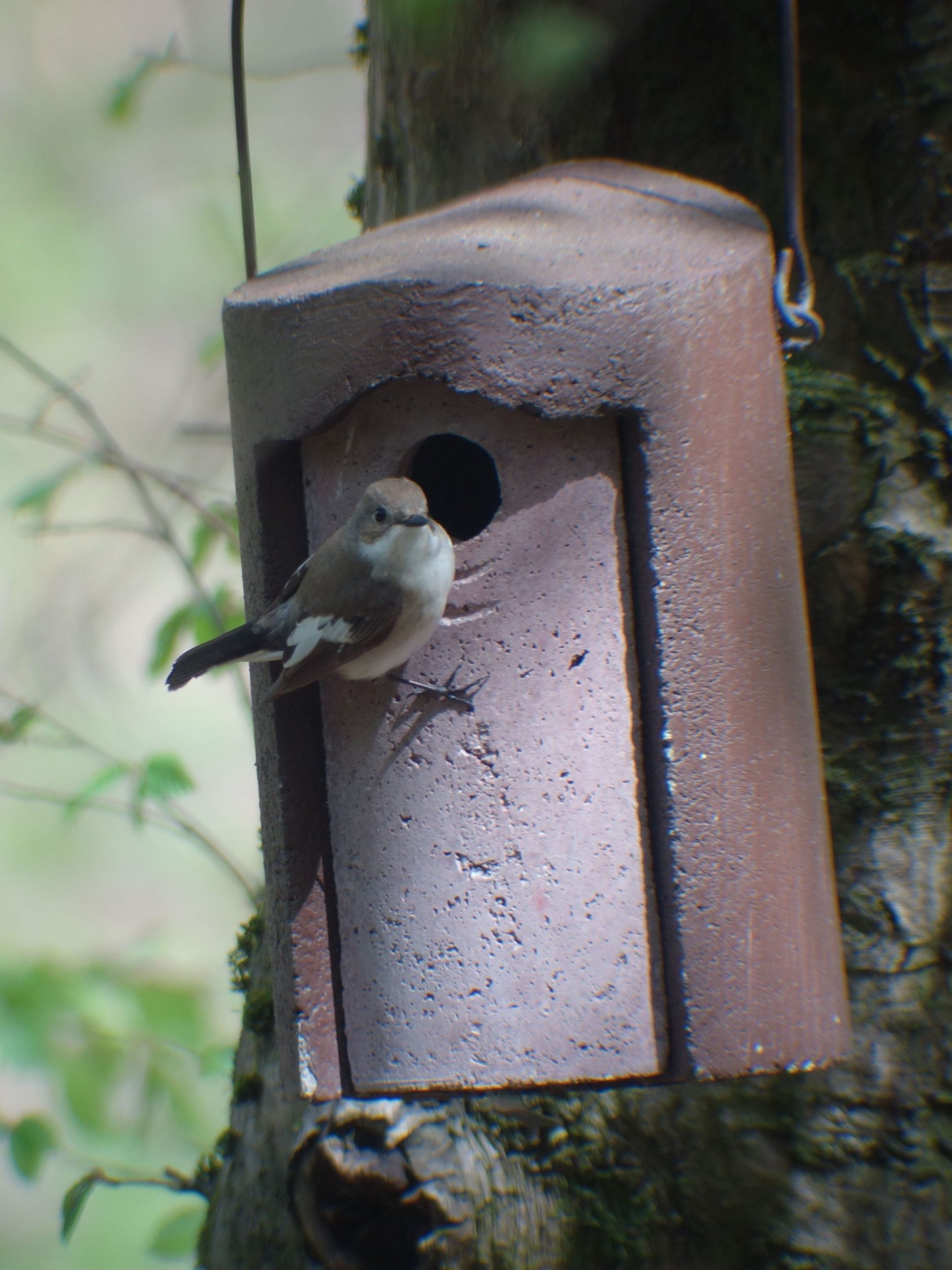 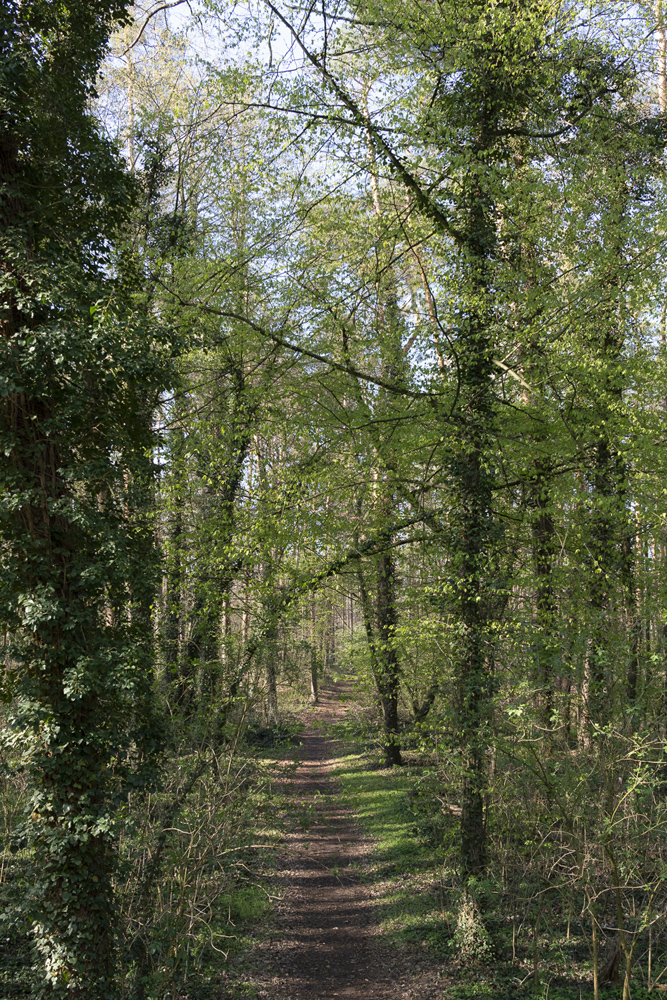 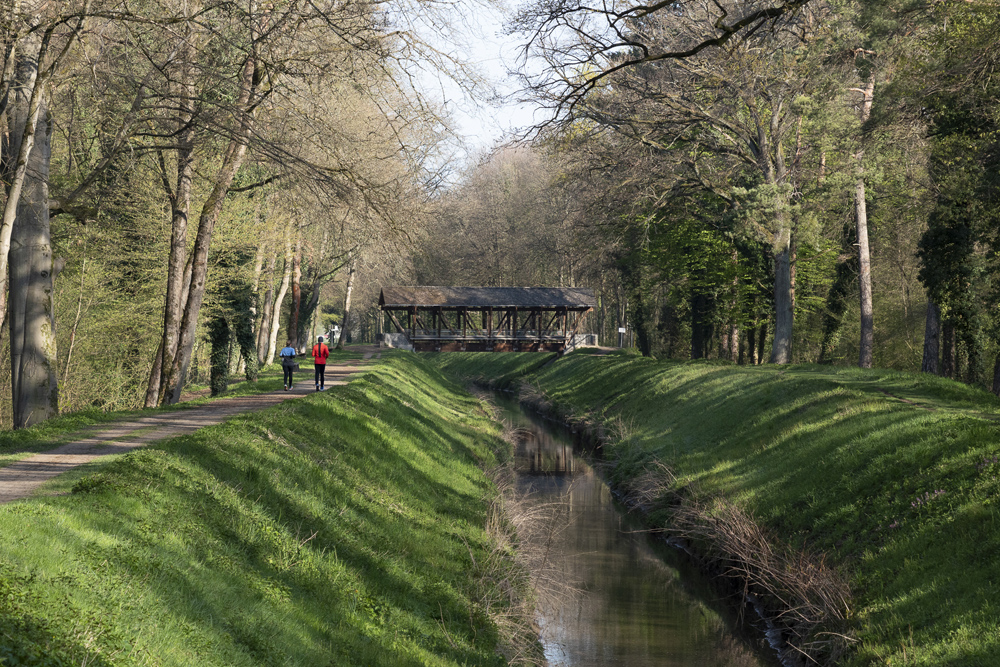 Ears indicate the way forward on the sonorous trail in Hammelbach