With her alpaca farm on Pferchelhang hillside in Heidelberg, Melanie Weigl has created a place where people feel protected and safe, and where they can connect—with a herd of special animals.

“Good morning, boys,” Melanie Weigl calls. Smiling, she walks across the gently sloping meadow orchard on Pferchelhang in Heidelberg. Königsstuhl mountain towers behind her. The sunshine dapples the ground as it breaks through the crowns of the apple trees on the slope. Melanie walks quicker. The scent of damp earth and hay wafts in the air. You can hear trotting and a soft ‘mmmh’ that sounds like a hum. Melanie’s ‘boys’ are coming. Ten alpacas live on the Hirtenaue alpaca farm: Peppino, Maylon, Terenz, Sam, Black Diamond, Gargamel, Majesty, Claudius and the two youngest De Angelo and Timirus. Melanie disappears into a fleecy ball of earthy tones. She tickles and pets, bathing in the hum of the animals that have changed so much in her life. Virtually everything.

Melanie grew up with her grandmother on a farm in the Lüneburg Heath region. In the midst of chickens, dogs and cats. Animals were part of her world; they were her life. Until she moved to Heidelberg to study. She thought about studying medicine or majoring in psychology, but then decided to go for music. “I realized later it hadn’t been what I wanted,” the 37-year-old says today. With a muffled sound, her feet take a few steps forward and the alpacas follow her through a narrow gap into the front part of the farm. There are a barn, a sitting area and a construction trailer, which is home to her little alpaca store.

Melanie shakes out the contents of a small bag onto her palm. A mixture of herbs comes into view. Peppino buries his muzzle into her palm. He is the alpha in the herd. Not taking care of him first would be a real affront, Melanie says, laughing. She knows a lot about the animals that have grown together to form her herd. About the personality of each alpaca, social interaction between them and the underlying rules. About each animal’s sensitivities, about their feelings and their ability to show empathy. 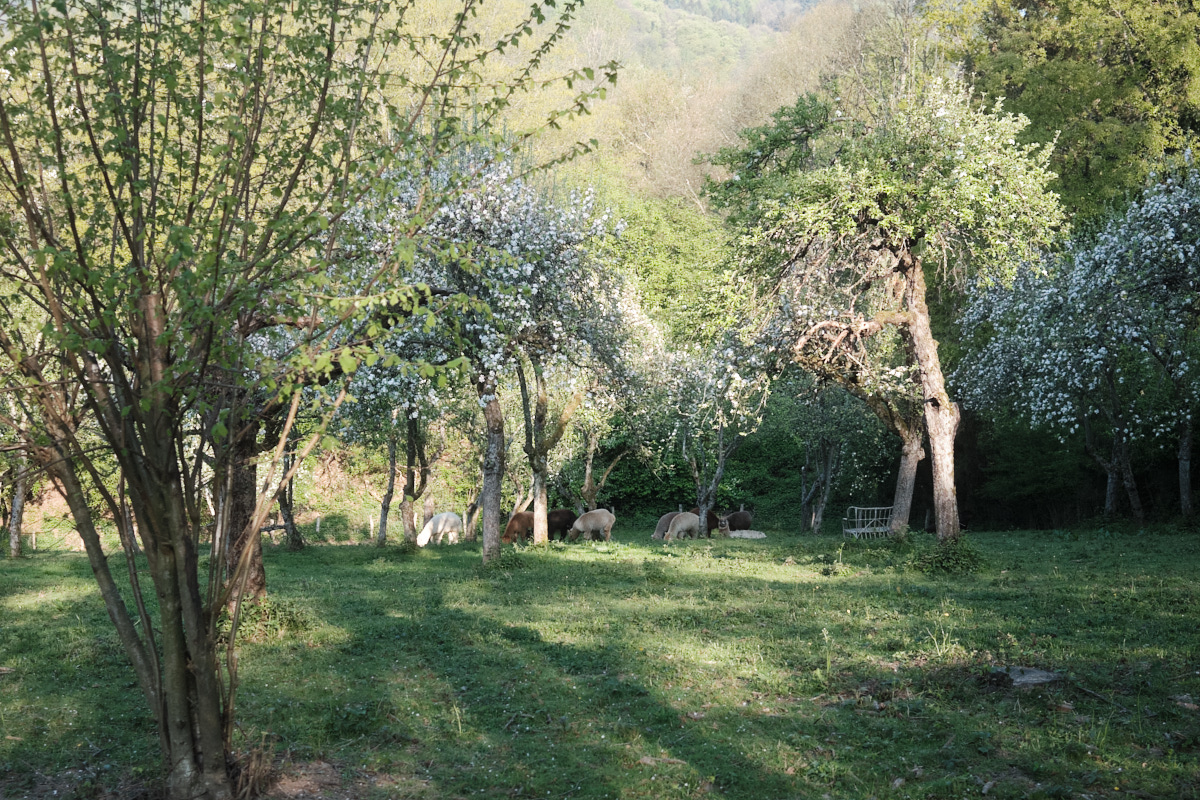 An idyllic meadow orchard on Pferchelhang in Heidelberg. 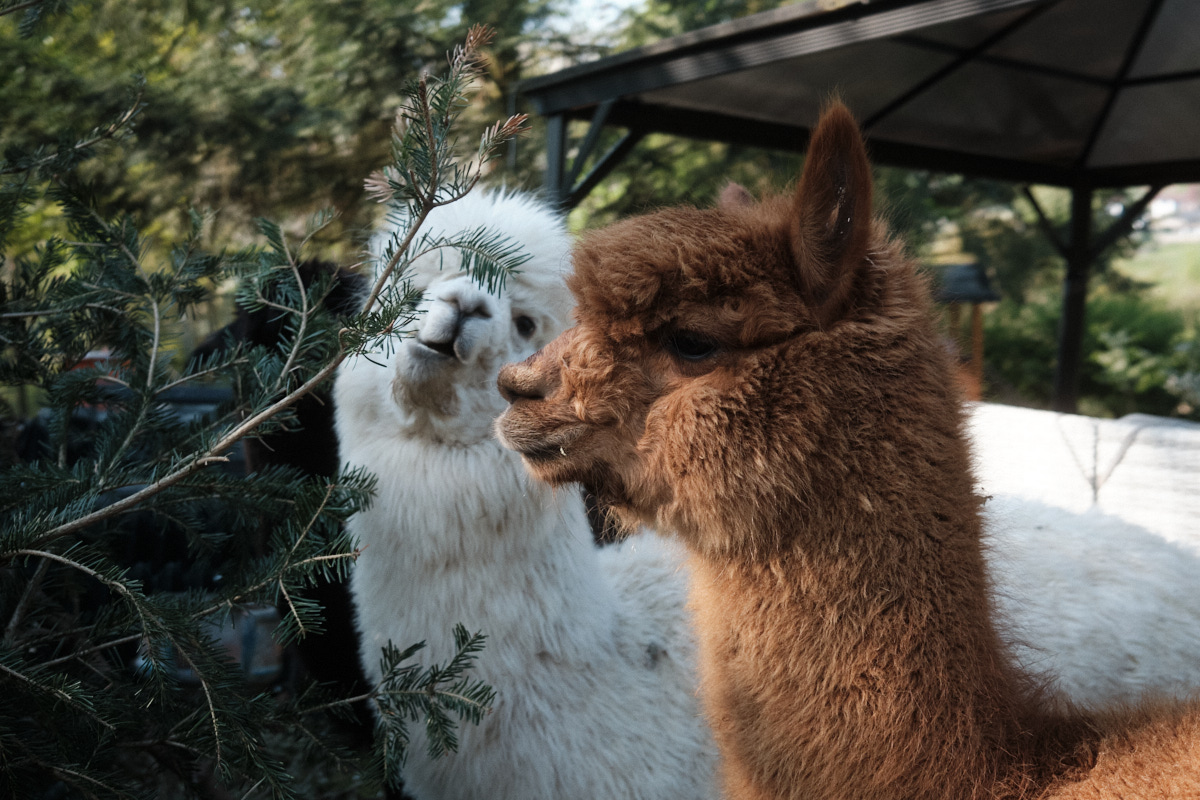 This is where Melanie Weigl's alpacas live... 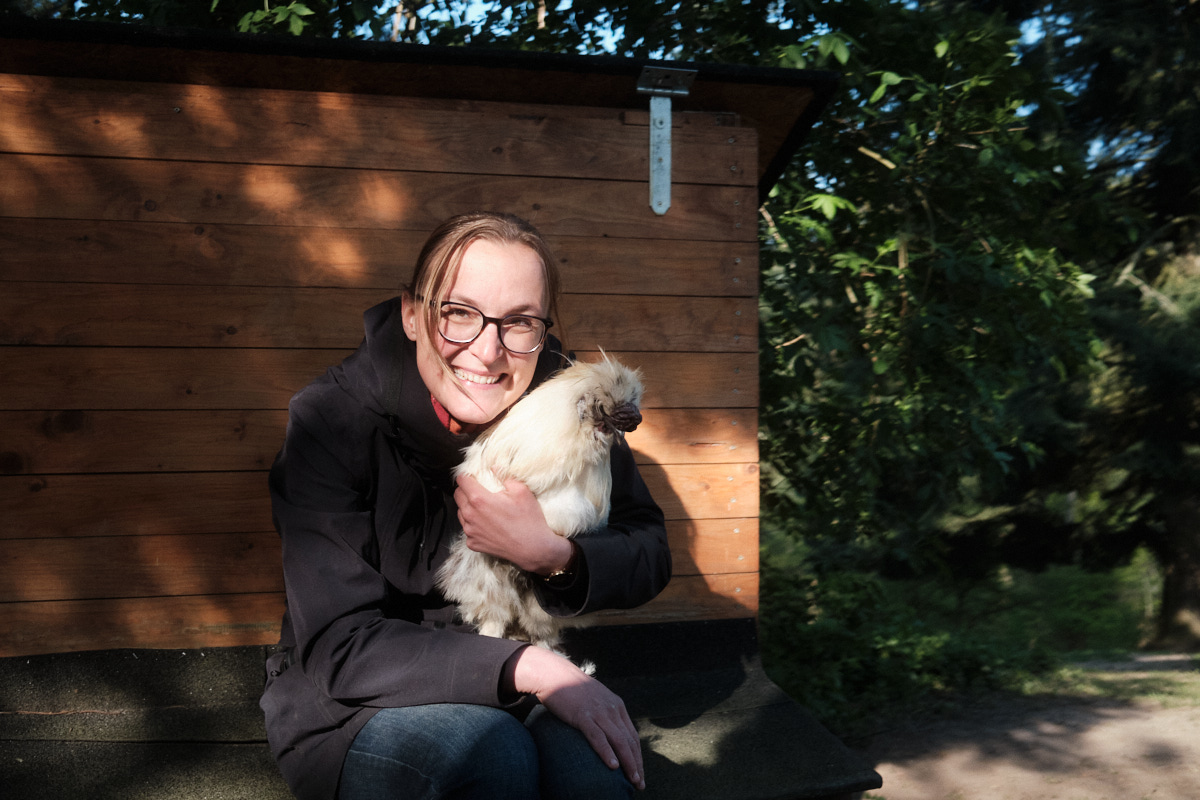 and some other animals too. 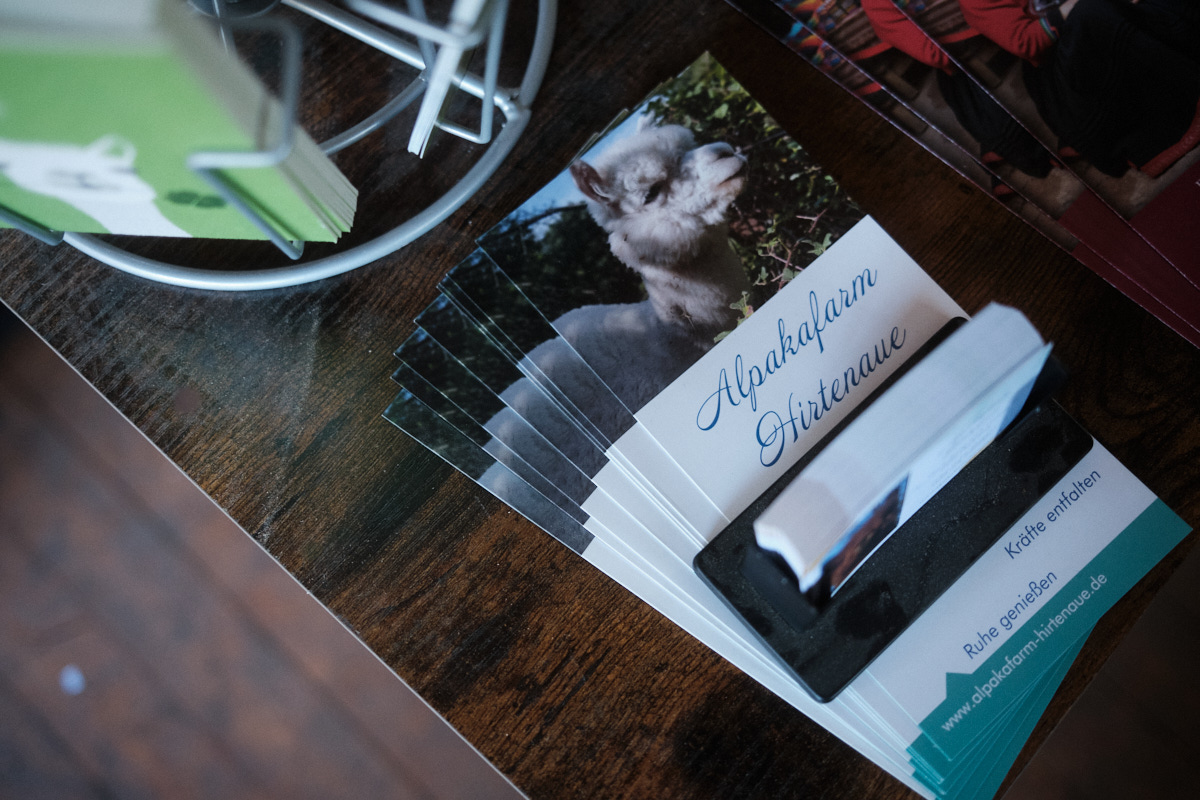 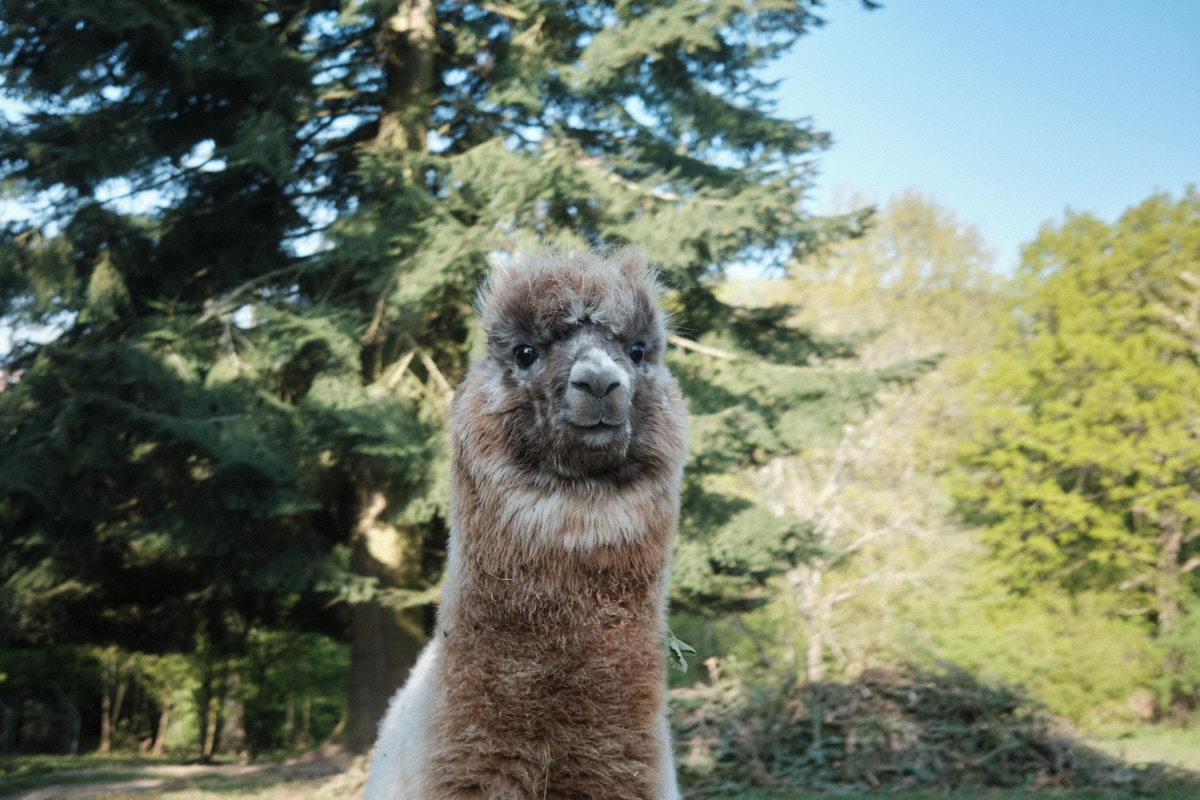 The waiting lists are long. 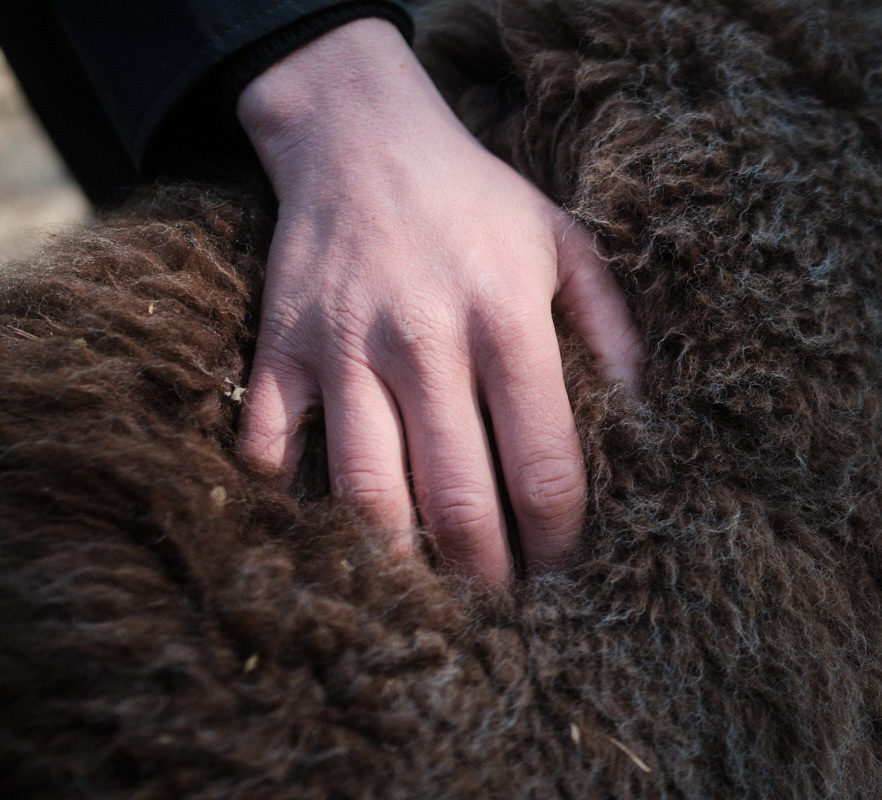 The calmness of the alpacas carries over to the people. 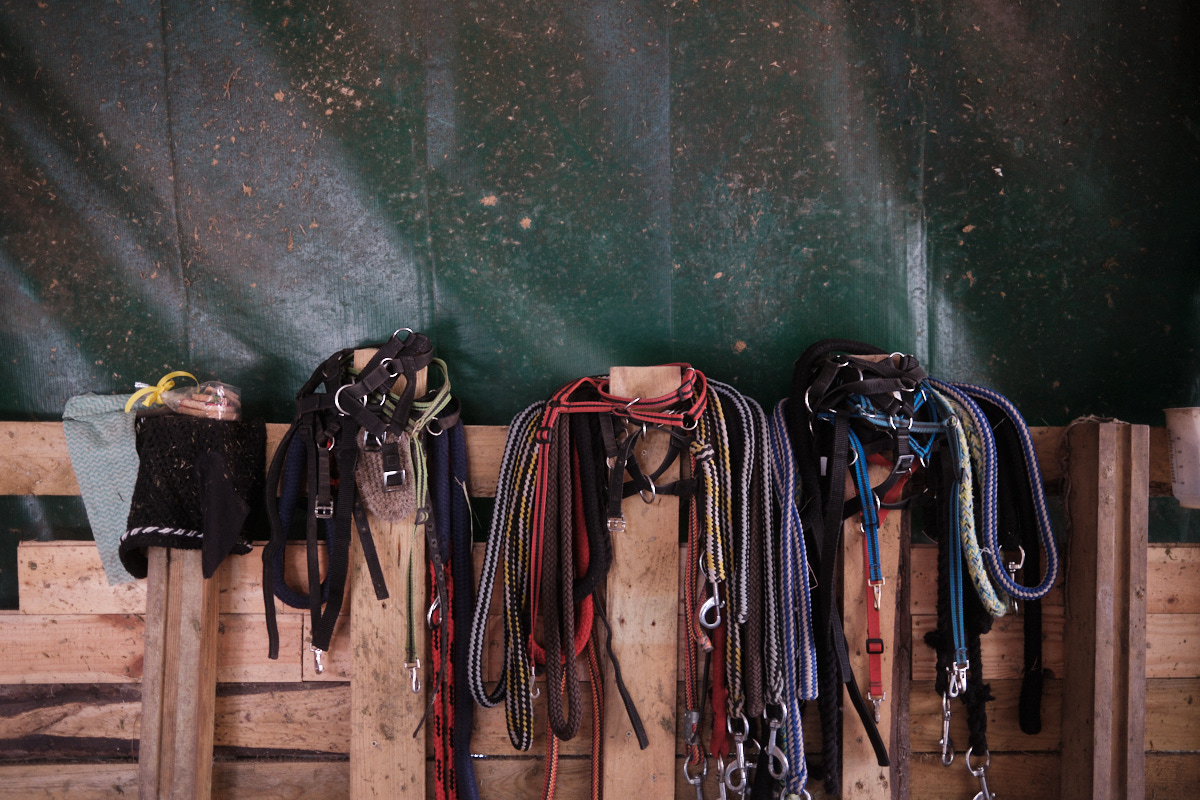 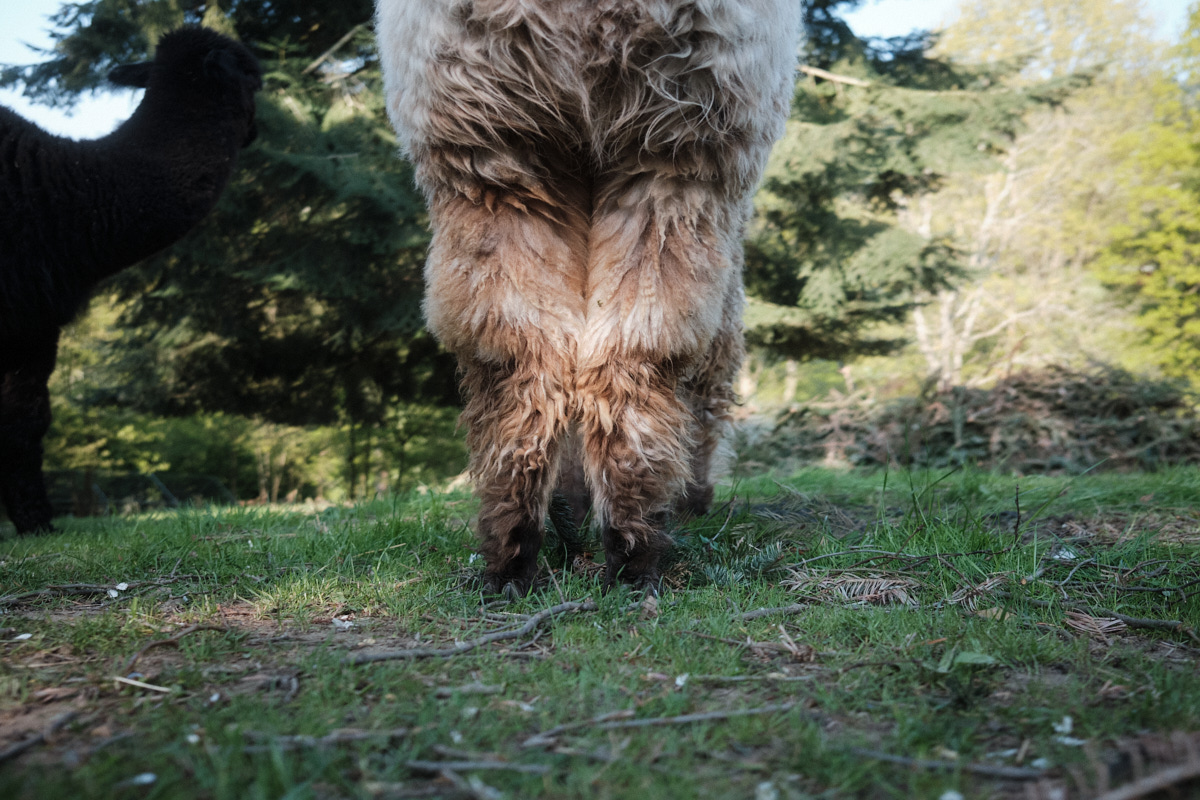 Melanie completed her studies although the subject she chose to study had never felt quite right. She moved to Bavaria and worked as a church musician. But the job didn’t give her fulfilment. When she wasn’t working, she used to spin. On a spinning wheel, like her grandmother had showed her. She often shredded alpaca wool for this, without knowing more about these animals. Or about how important they would soon be in her life.

Most of those who have been here once come back again and again,

Melanie quit her job and revisited her original dream of studying: her desire to help people. She returned to Heidelberg, even though she wasn’t able to afford a second degree course. She trained as a paramedic and interned in psychiatric clinics. And she read about the animals whose wool was spun over her spinning wheel at home—about how they are used in therapeutic treatment for people. “That was the key moment,” Melanie says five years later. Her gaze wanders to the small construction trailer where she offers alpaca wool, stockings, clothing and other high-quality souvenirs. In one of the two corners at the rear is her spinning wheel.

In 2018, Melanie launched a campaign to crowdfund her own alpaca farm, with two more campaigns to follow. She definitely wanted to work with the animals that have such a calming effect on people. For months, she searched for a suitable plot of land in Heidelberg, a hillside area, just the way alpacas like it. With lush meadows, because alpacas feed mainly on grass. Chances were low. Again and again she heard the sentence that there was not a single square metre left in the city. Melanie’s search was not successful until she posted a message on Facebook. Suddenly, a lady offered her a plot on Pferchelhang hillside and other property owners were soon to follow. Small plots finally formed an area that now covers one hectare of land. Land on which the Hirtenaue alpaca farm was established.

In 2019, on Whit Monday, Melanie offered the first alpaca hike. Many more have followed since then. Today, she is generally on tour five days a week with visitors and her animals. They usually trot through the surrounding forest once a day, but never more than twice a day. “For me, the most important thing is that my alpacas are doing well,” Melanie says. This is why hikes don’t take place every day and there are always plenty of breaks. Also, she doesn’t rent out her animals for wedding shoots or events. There is only the life on the farm—a life appropriate to their species.

A Silky chicken pecks against Melanie’s shoe. One of five adult ‘fluffies’ scurrying about the farm, while ten of her chicks live in an aviary—to protect them against birds of prey. The farm is a quiet, a gentle place. A place where many people feel protected and safe. “Most of those who have been here once come back again and again,” Melanie says. The calmness of the alpacas carries over to the people. Above all, their sincere sense of connection. The two youngest animals are huddled with the herd in the front area of the farm. One alpaca nestles close to the other. A humming sound emerges—the animals communicate and move closer together. The farm has also changed the people in the neighbourhood. They are often drawn to the farm, especially the children. “On Christmas Eve we all meet here in the morning, that’s a nice appointment,” Melanie says, while a Silky chicken jumps onto her lap. Again and again she runs her hand over the animal’s back.

The waiting lists for Melanie’s hikes are long. She therefore also offers hourly visits to the farm: 60 minutes during which people can stay on the farm—and let happen what will happen. It is the alpacas that decide on the programme and the direction: proximity or distance, as the animals’ curiosity or scepticism guides them. Children’s birthday parties are held here as well. “Most of the time the parents tell me that they have never celebrated such a relaxed children’s birthday party before.”

Starting this summer, Melanie and her two part-time staff would like to organise special hikes with the alpacas. “Many people were very lonely during the pandemic,” she says. Her hand rests on the Silky’s feathers, her gaze wanders to the horizon. The speed dating hikes are due to start in June and July: “Two people leading an alpaca together—and maybe this casual, protected setting will help them open up.”

Helping other people—that was the original idea behind her project. One that is particularly important to Melanie. And one that she is proud of. Again and again she receives requests from people suffering from depression, anxiety or obsessive-compulsive disorders. From autistic people or people with chronic pain. Ideally, Melanie works together with the doctors and therapists.

She then brings the patients to the alpacas—this fluffy ball composed of earthy colours that has the power to change things. 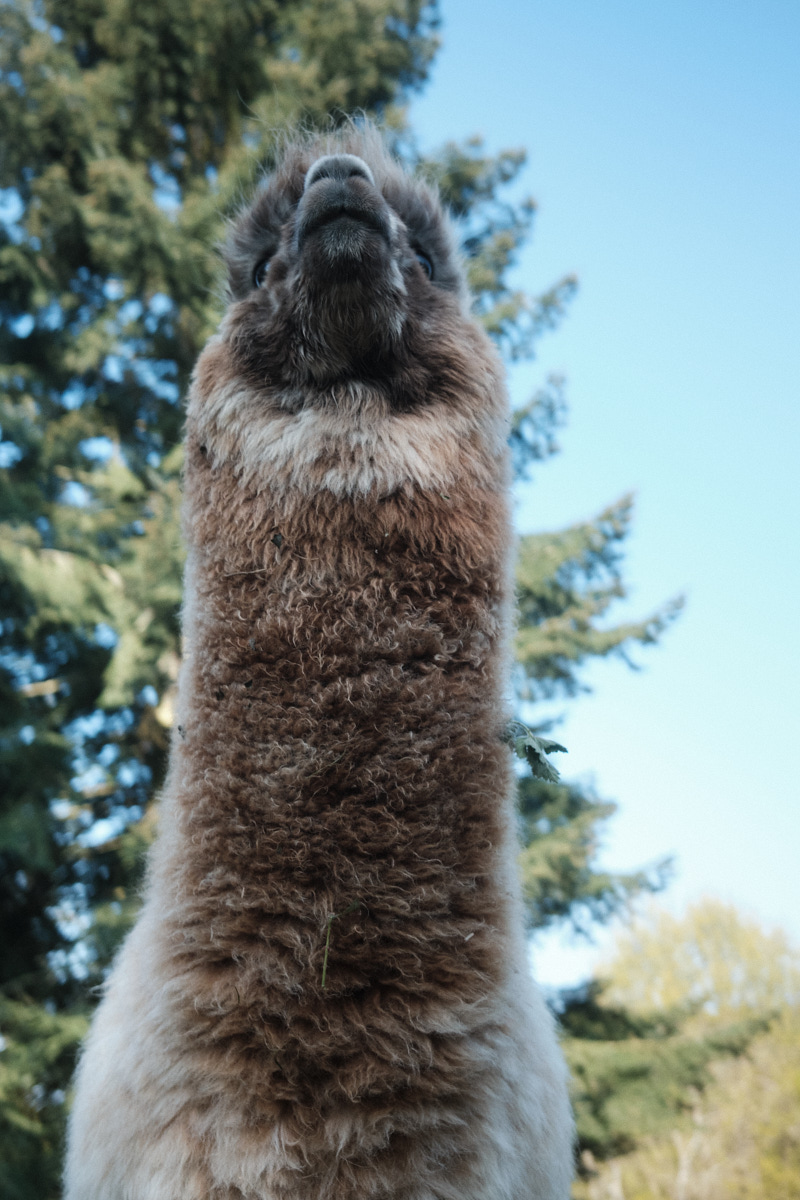 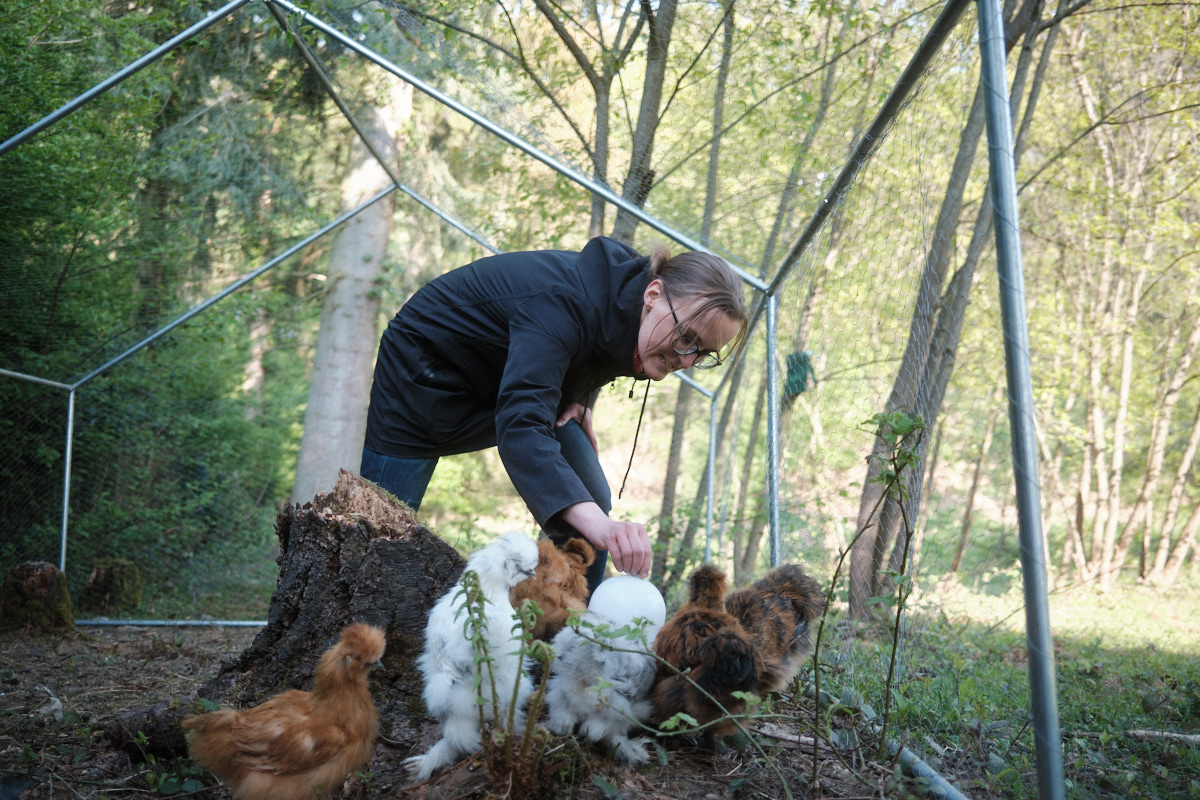 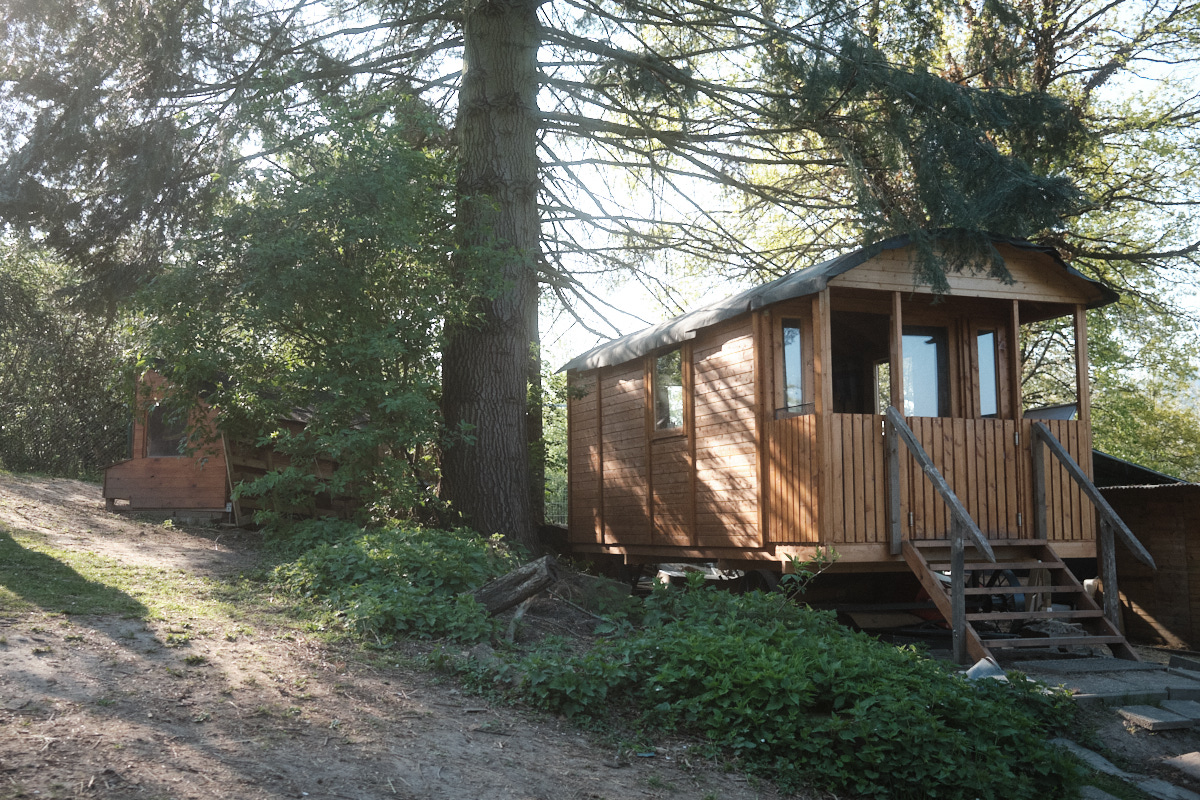 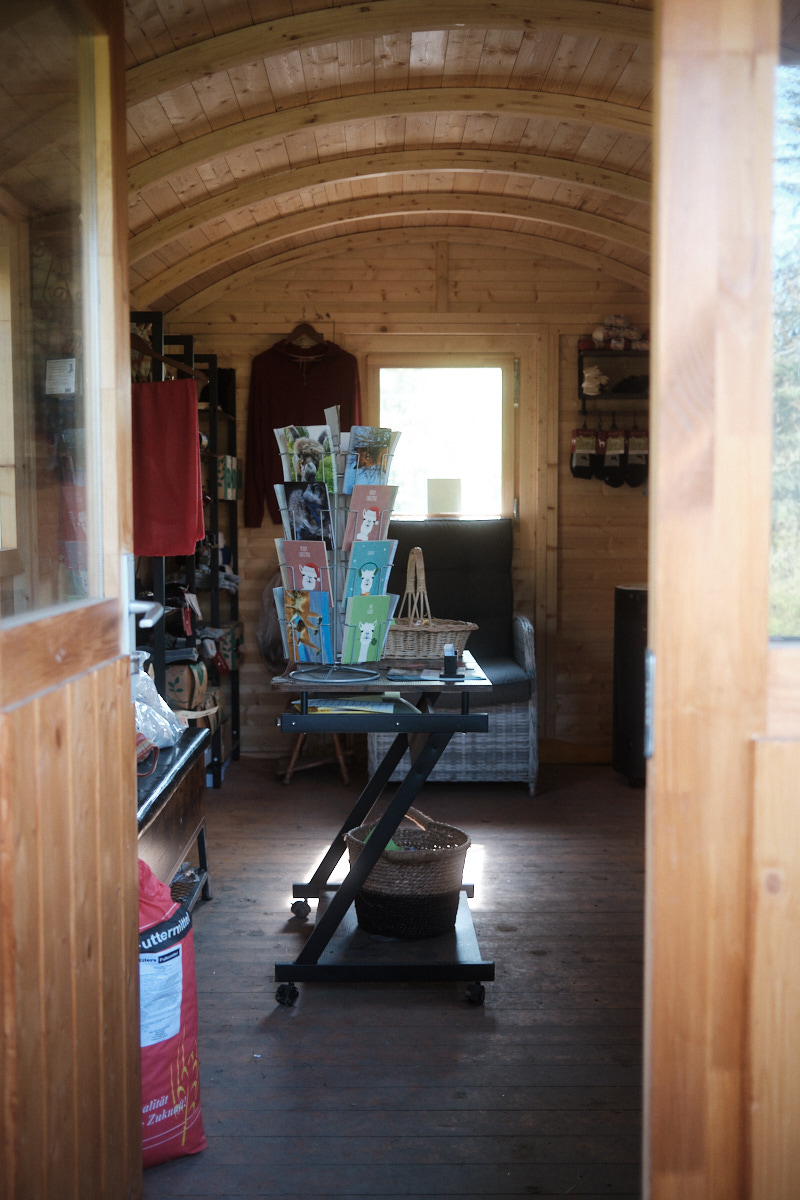 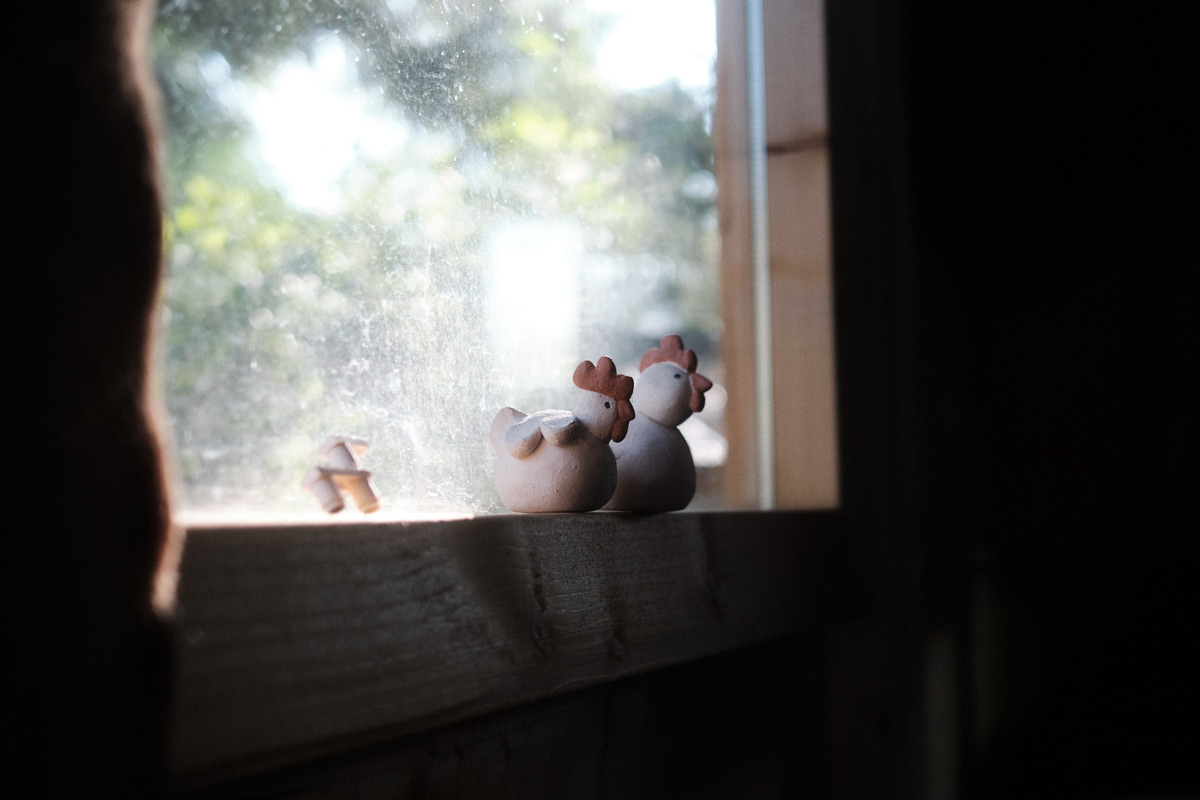 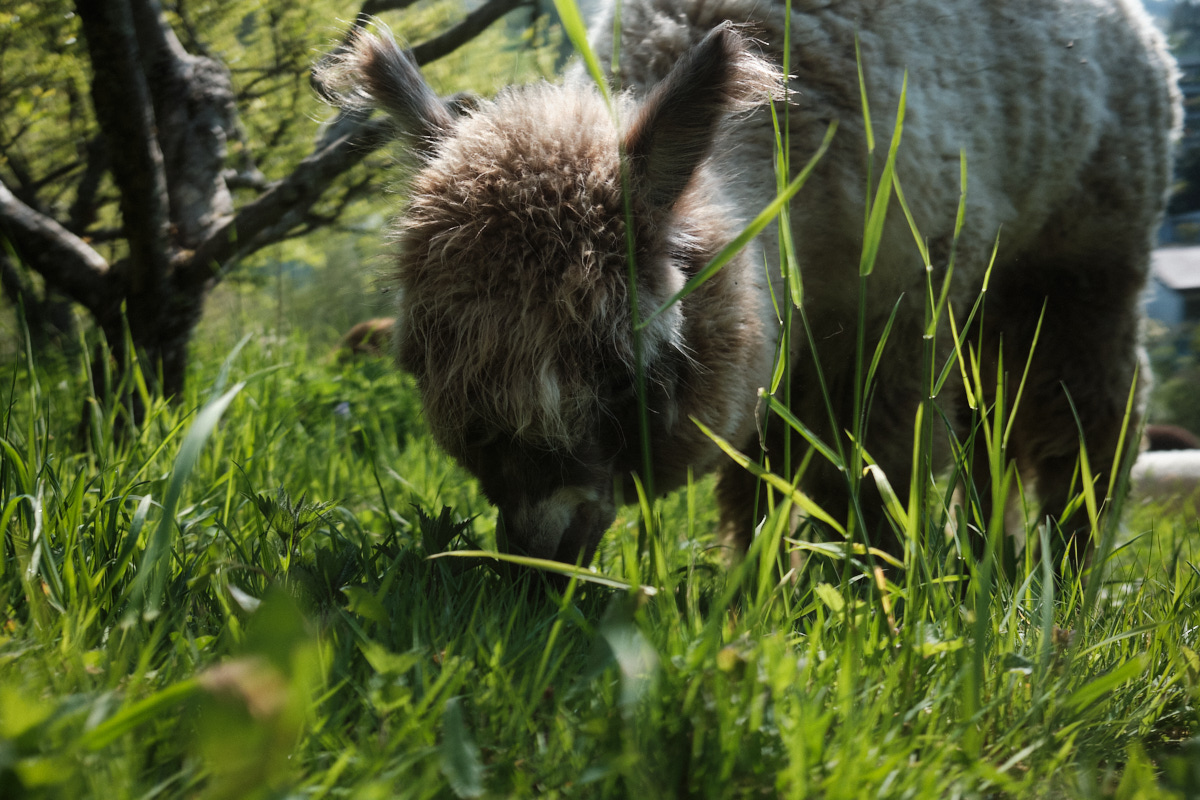 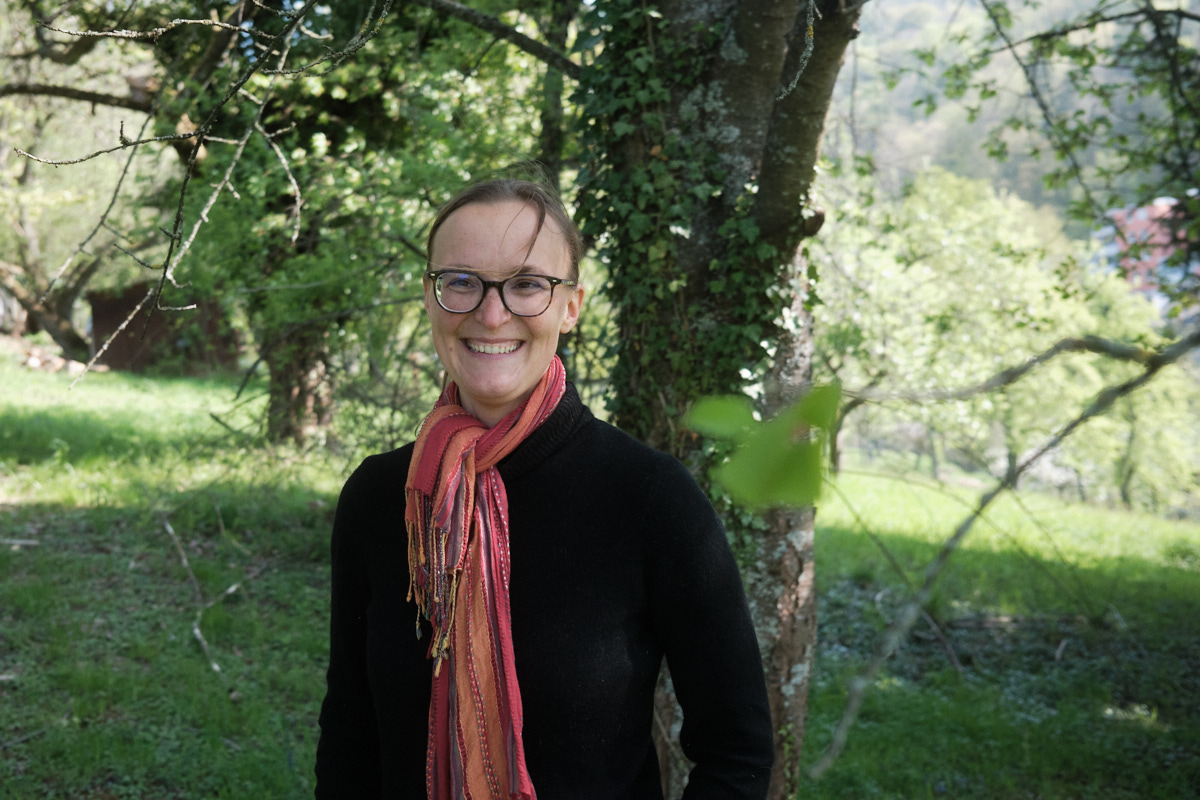 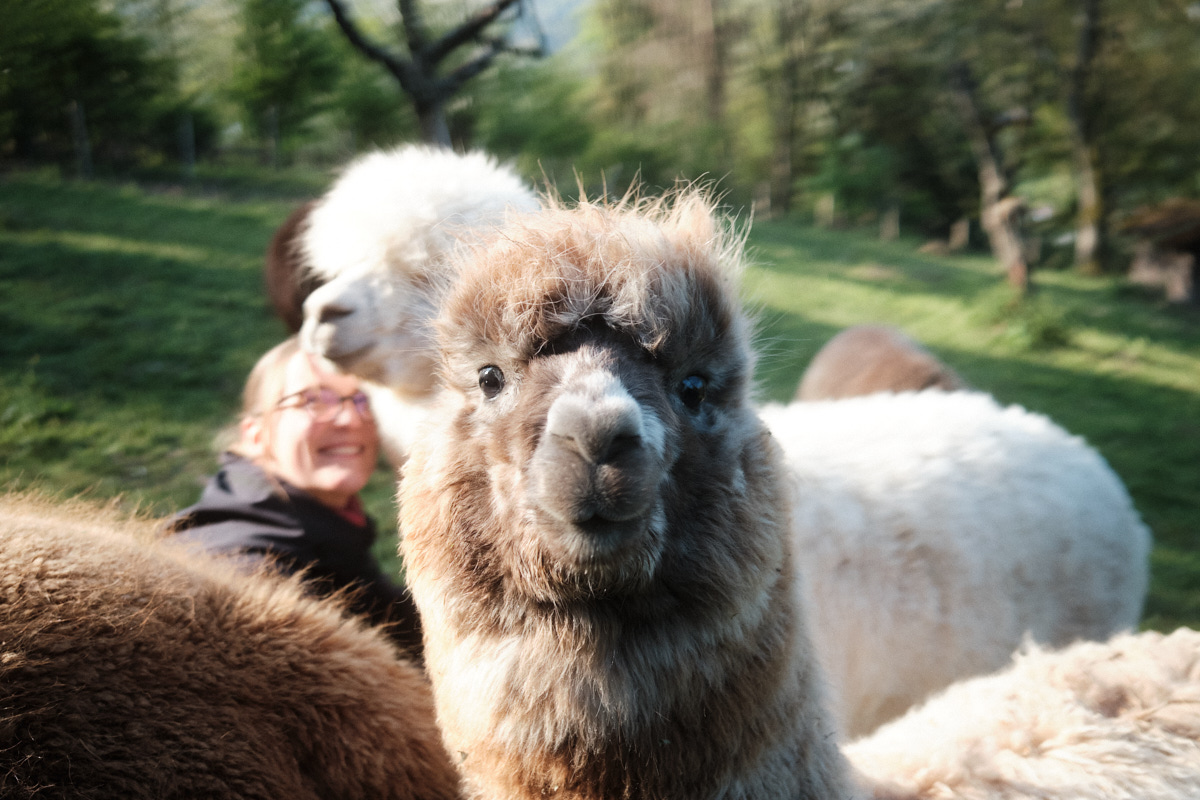 Where the water buffalo graze