Where the water buffalo graze

Very special ecosystem engineers are out and about in summer in the Erlache nature reserve near Bensheim: water buffalo. The local herbivore support group in the Bergstraße district wants to reintroduce the animals, which were extinct in the region, because they open up the landscape and provide for healthier soils and more biodiversity.

It is a mighty animal: a good 1.5 metres high, weighing over 500 kilogrammes, with shaggy fur and large horns. It stands still between waving grasses, its legs completely disappearing among them. Only its jaws are constantly moving—ruminating. A starling lands on its back and pecks at its fur. The water buffalo cow gives the starling free rein.

The scene looks like something taken from a wildlife documentary about Asia. But we are in southern Hesse. In the Erlache nature reserve near Bensheim. “Hey, boss!”, Gernot Heuser shouts out. He looks after the large animals together with his wife Beate Dillmann. In response, he gets a deep, creaking grunt. The mighty water buffalo cow slowly starts to move. The starling flies off. The cow heads straight for Gernot, who is holding a fat carrot in his hand. It takes the vegetable and chews it with relish. The cow knows Gernot and trusts him. The stranger next to him, however, receives a suspicious look from it. The cow is the boss here, responsible for the small herd of five water buffaloes grazing nearby: a male, three females and one young animal. And she takes the job seriously.

Water buffalo have been grazing in southern Hesse again since 2014. Just like they did tens of thousands of years ago. Until the last ice age they were native in Central Europe. Then, the European water buffalo was wiped out. Researchers are not quite sure whether this was due to climate change or to human intervention. One thing is certain, though: Since the disappearance of the large herbivores, which include the aurochs, there has been a gap in our native ecosystem. The Förderkreis Große Pflanzenfresser support group in the Bergstraße district wants to change this and reintroduce the large beasts. 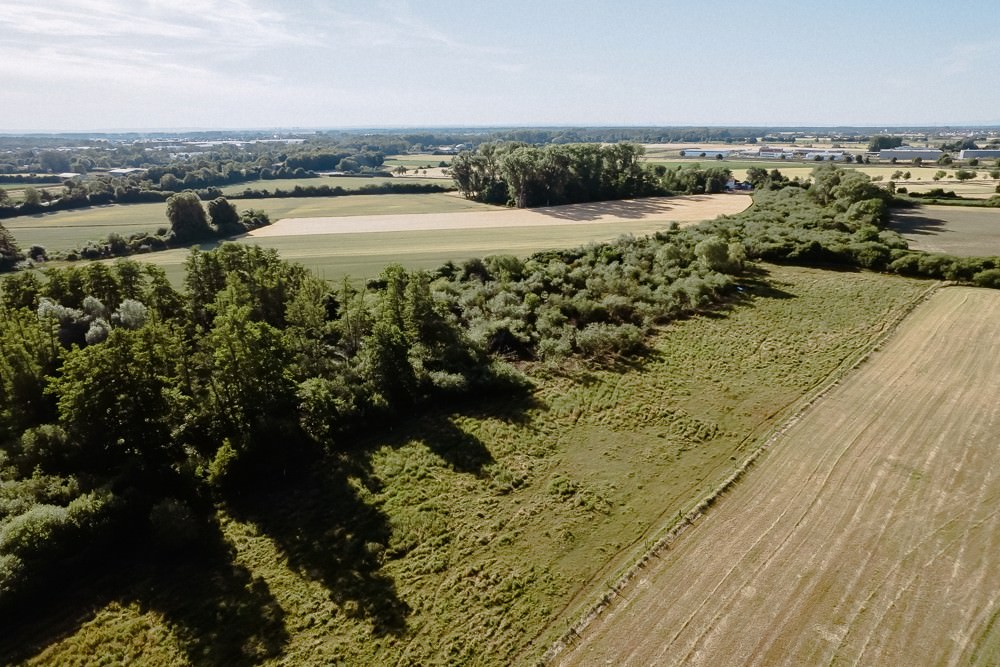 The Erlache nature reserve near Bensheim. 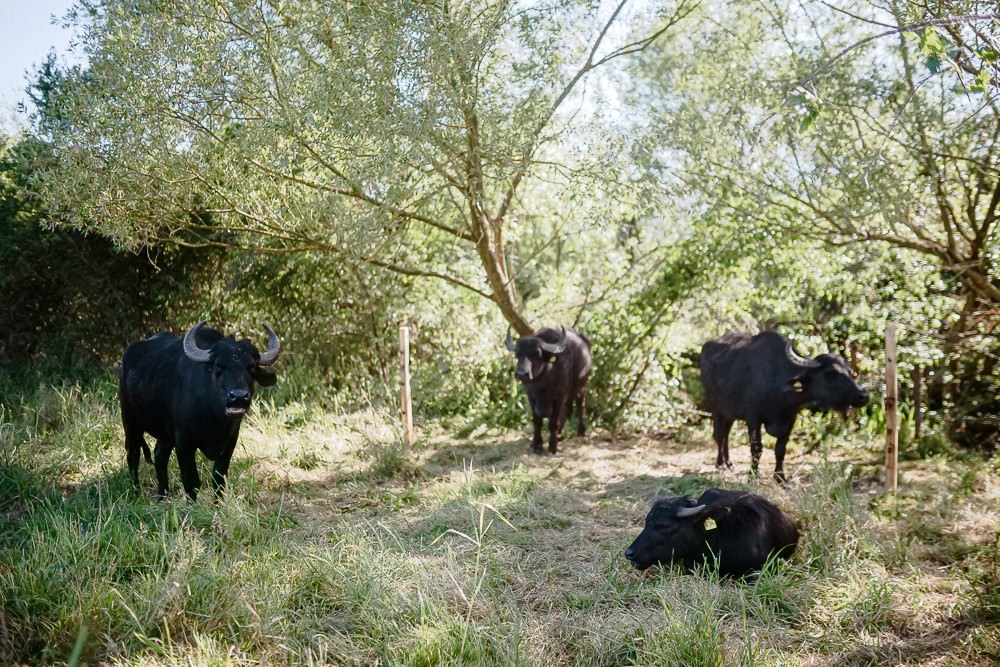 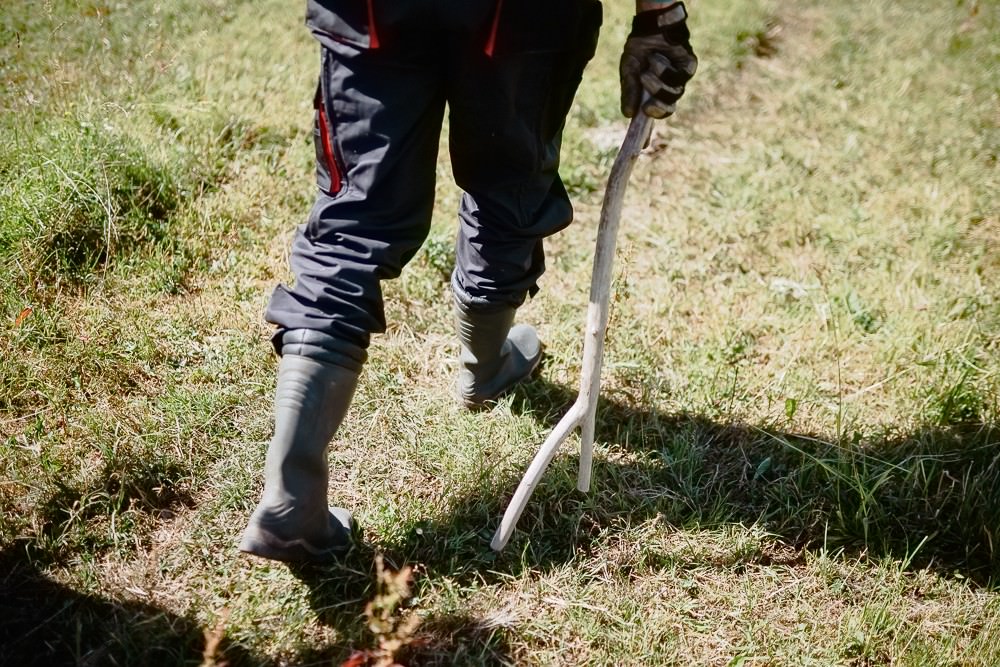 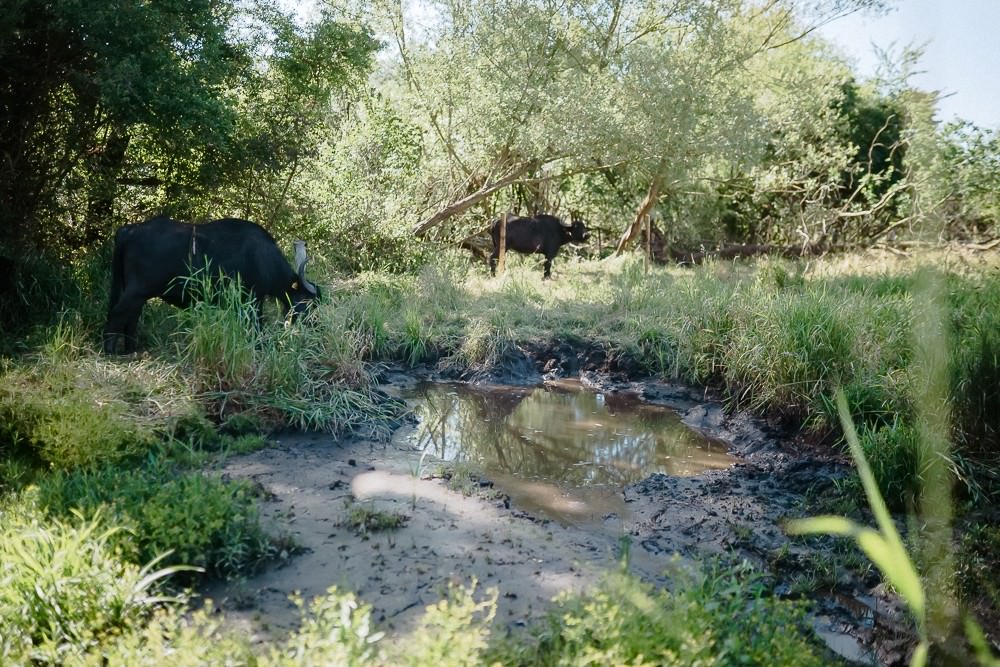 … and create a diverse ecosystem. 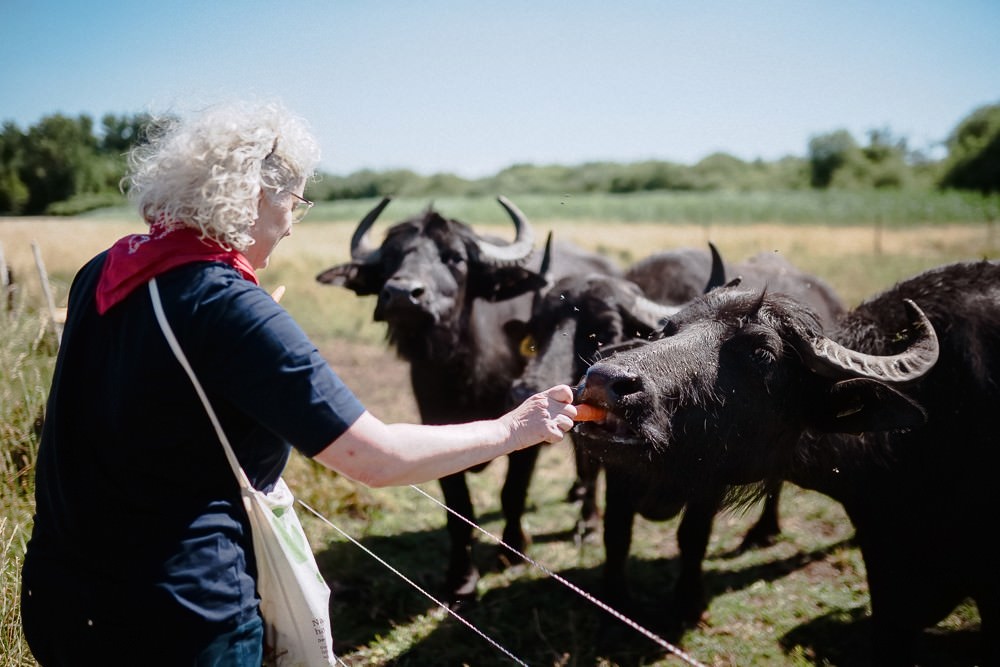 A treat for in between: Beate Dillmann feeds them carrots. 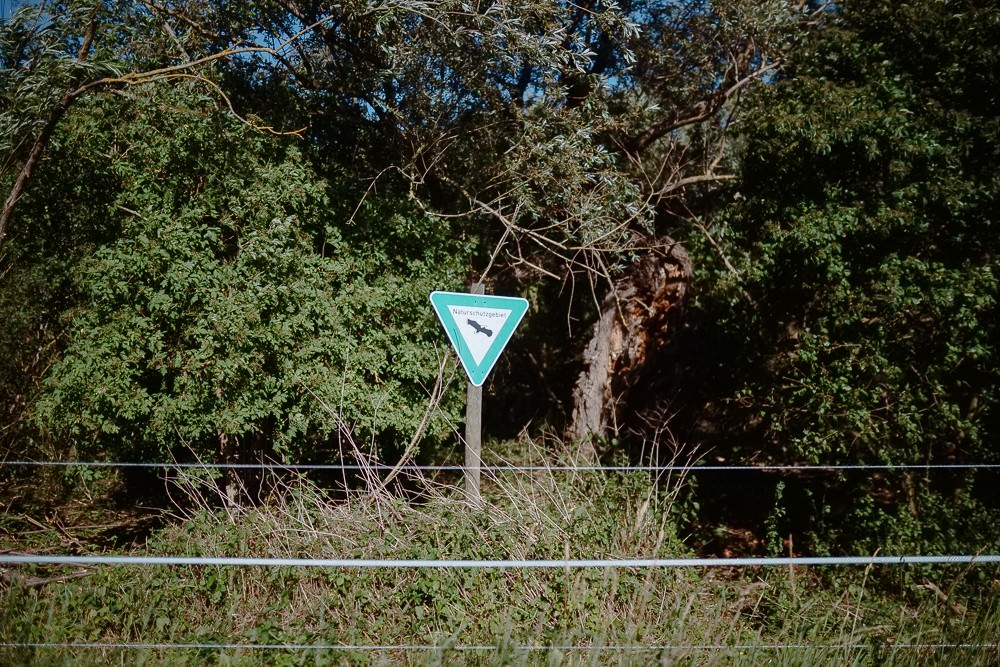 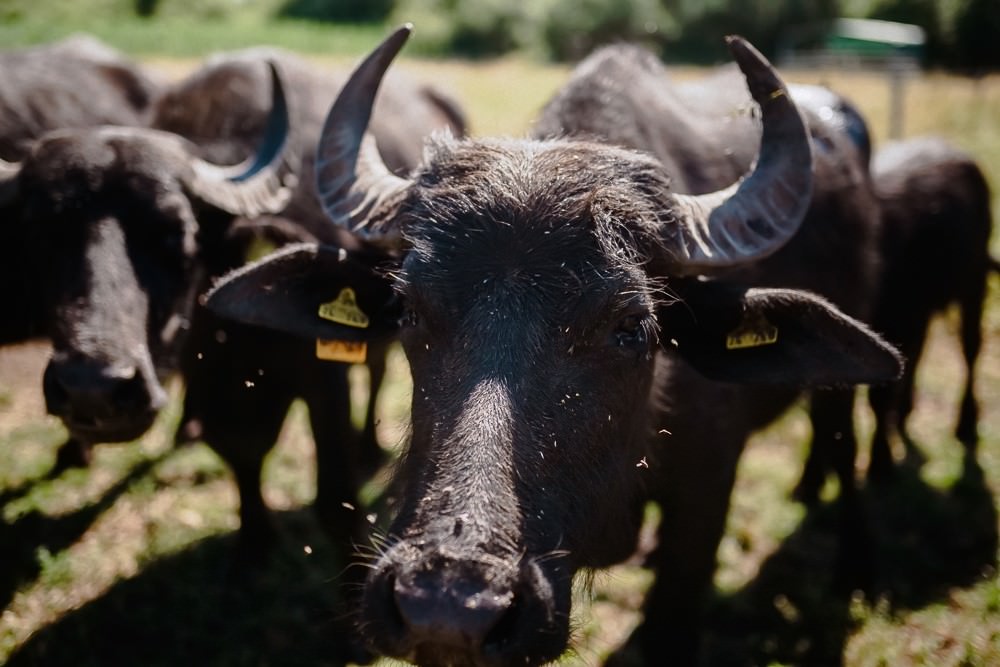 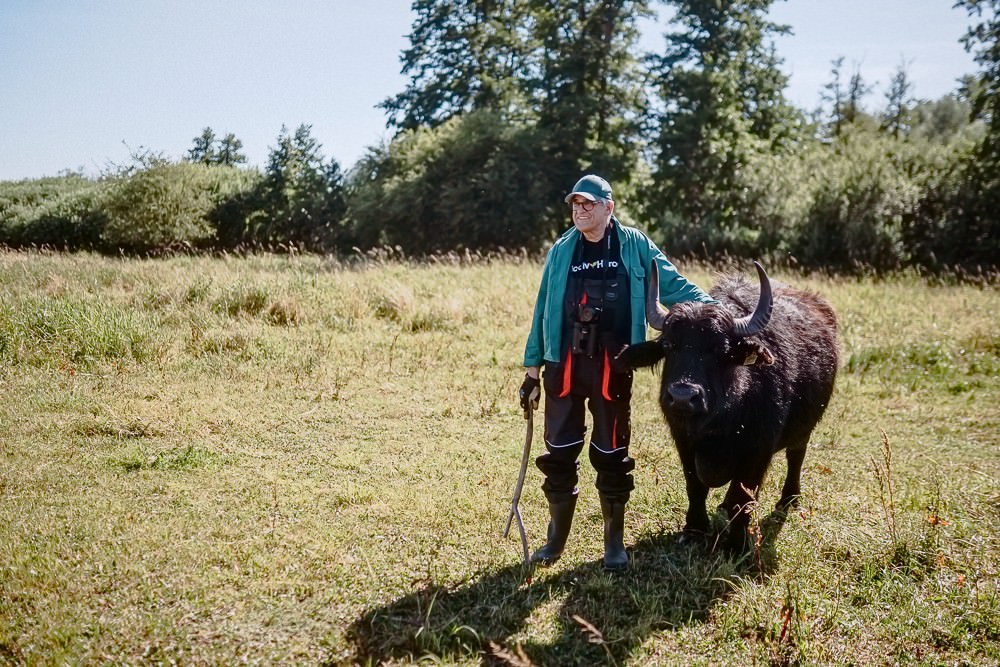 Gernot Heuser with the ‘boss’ cow—who comes to him to be petted.

Although their territory is only four hectares in size, you can see what the five water buffalo can achieve at the Erlache. Instead of a uniform meadow, different grasslands have come about. In the front, the meadow is almost completely trampled down. Small, ground-covering plants grow here. Farther away, the grass stands waist-high. A ditch filled with water cuts through the fenced area—practically inaccessible due to the large number of bushes and shrubs. The five water buffalo have already cut some trails, letting more sunlight spill onto the ground. More than 100 different plant varieties are already growing here, as an expert found out on behalf of the association. “The area is developing very dynamically. We discover new plants almost every time we visit the place,” Gernot says. Like the irises at the edge of the meadow. Or even orchids. “And there are so many dragonflies. I’ve never seen so many different types,” Beate adds. As if summoned by magic, a bright-red scarlet dragonfly buzzes by.

Gernot was one of the initiators of the project. Its starting point was the Grasellenbach-centered SILEK project on an integrated rural development concept, which involves local residents in the development of new ideas for the community. Gernot has been active in the nature and landscape working group. Even as a child, he spent most of his time outdoors and observing animals. He even started breeding fire salamanders. Gernot has been committed to environmental protection and nature conservation for decades. The effects that climate change and industrial agriculture have on biodiversity have long concerned him. “And I’m always in favour of starting to change things in my own backyard first.” The working group discussed ideas on how to keep the landscape around Grasellenbach open. After all, the alternation between meadows and forests is typical for the region. But wet meadows or steep slopes in particular are in danger of becoming overgrown and disappearing under blackberry bushes.

Gernot came up with the idea to reintroduce water buffalo. They love marshland areas and are not fussy. “They eat stinging nettles and even knock down blackberry bushes,” he explains. Their footprints are wide and deep, forming ideal little pools for amphibians in spring and creating open spaces. Their droppings are just as large—paradise for insects like dung beetles. And the more insects and invertebrates return, the more amphibians, reptiles and birds feeding on them return as well. Gernot points south: “Over there in the reeds, the leaf warbler is breeding.” Again and again he pauses, listening for bird calls. “Listen, that was a common chiffchaff,” he says, or, “can you hear the nightingale?” A pair of binoculars and a camera are dangling around his neck. He wears long work trousers and gloves despite the hot weather—always ready for a safari into the “brush.”

In 2013, Gernot founded the Förderkreis Große Pflanzenfresser im Kreis Bergstraße, a herbivore support group, together with fellow campaigners. Its chairman is Claus Kropp, who is the director of the Freilichtlabor Lauresham open-air laboratory located on the monastery grounds of Lorsch Abbey. He is also in charge of a back-breeding project for aurochs, which became extinct in the 17th century. Beate Dillmann is also a member of the association. “I would never have thought that I could get excited about such big animals,” she says. But since her husband took her to a conference on biodiversity one time, she has also been passionately committed to nature conservation. “That was a wake-up call for me. We simply cannot continue to treat our earth the way we do at the moment.”

In the beginning, she admits, she always hid behind Gernot. However, she has always had great respect for the large animals. Their unhurried manner, the calm they radiate, it impressed her. Beate observes the herd, her gaze lingers on the calf that won’t leave its mother’s side. “This is Wilma. We were there the night she was born.” Even today, you can still hear the excitement in her voice from back then. They were repairing a fence when the buffalo cow Gina started acting funny. “Just two hours later, Wilma was born. Without any help from us at all. We just watched.” She smiles.

However, the animals are not always as peaceful as they are at the moment. “If they don’t like something, you should really watch out,” Beate says. This is one of the reasons why proper reintroduction to the wild is not on the agenda in southern Hesse. “The area is far too densely populated. It would only lead to conflicts,” Gernot explains. More conflict than there is already. Not everyone was enthusiastic about the project at the beginning. Hunters feared that the large animals would drive away game. And some conservationists feared that they would destroy spawning grounds for amphibians.

Six years later, the dust has settled. More and more people realise that water buffalo fit well into this ecosystem and that they do not disturb, but actually enrich, the local flora and fauna. In winter they are kept around Hüttenfeld, in summer around Bensheim—so they don’t graze a pasture down completely. “We also plan to bring the local community back into contact with these animals,” Gernot explains. However, this is not so easy here in the nature reserve. “But we are happy to offer guided tours on request.”

Of the 15 or so members of the association who take turns looking after the animals, Gernot has the best relationship with the buffalo herd. When he stands in the meadow, even the boss cow sometimes comes up to him and puts its head against his belly—an invitation to stroke, which he gladly complies with. “They’ve grown on us,” he says. “We couldn’t part with them anymore.”

Gernot hopes that the small herd will soon be allowed to graze over even more area. And maybe even get a new addition. He points in the direction of the quarry pond where gravel is still being extracted. “When the plant is shut down, the water buffalo territory could extend to the lake and further to the forest.” 30 animals could then graze here, he imagines the scene, perhaps other cattle or horses as well—and together they could create a pristine, diverse landscape. 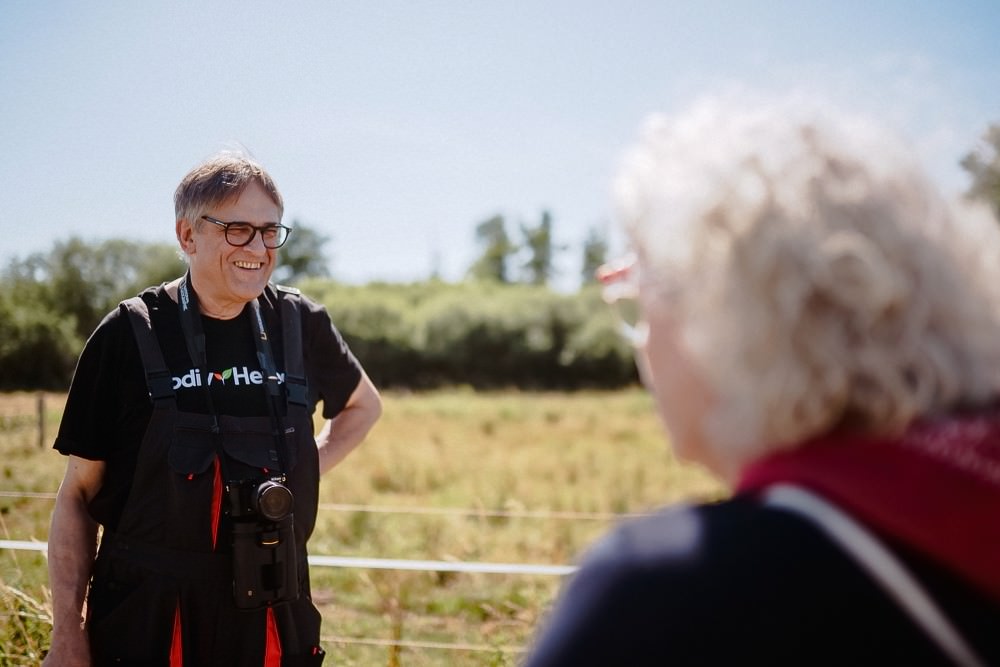 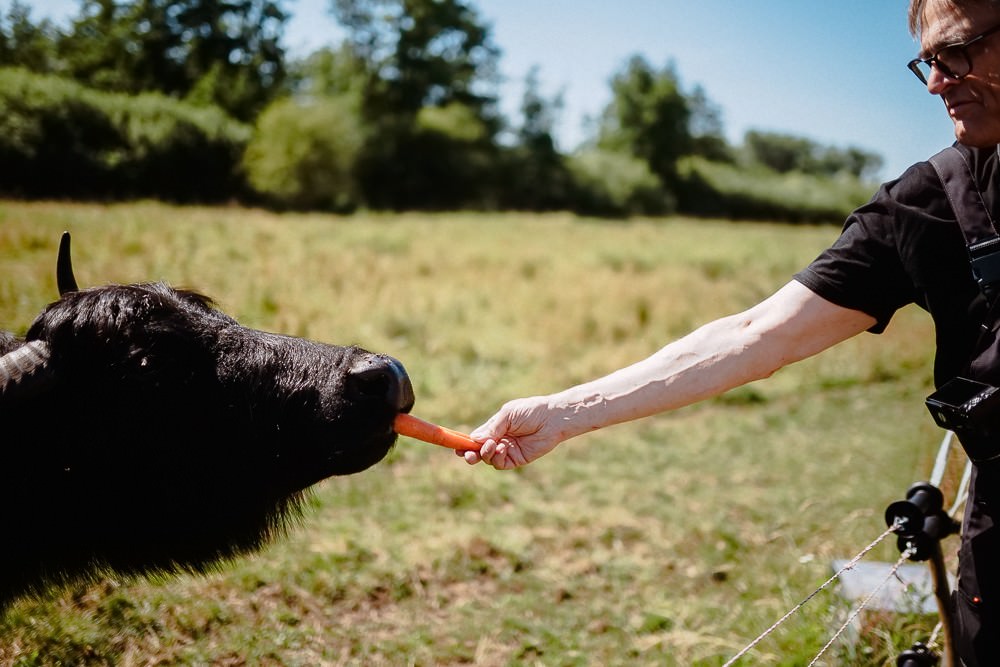 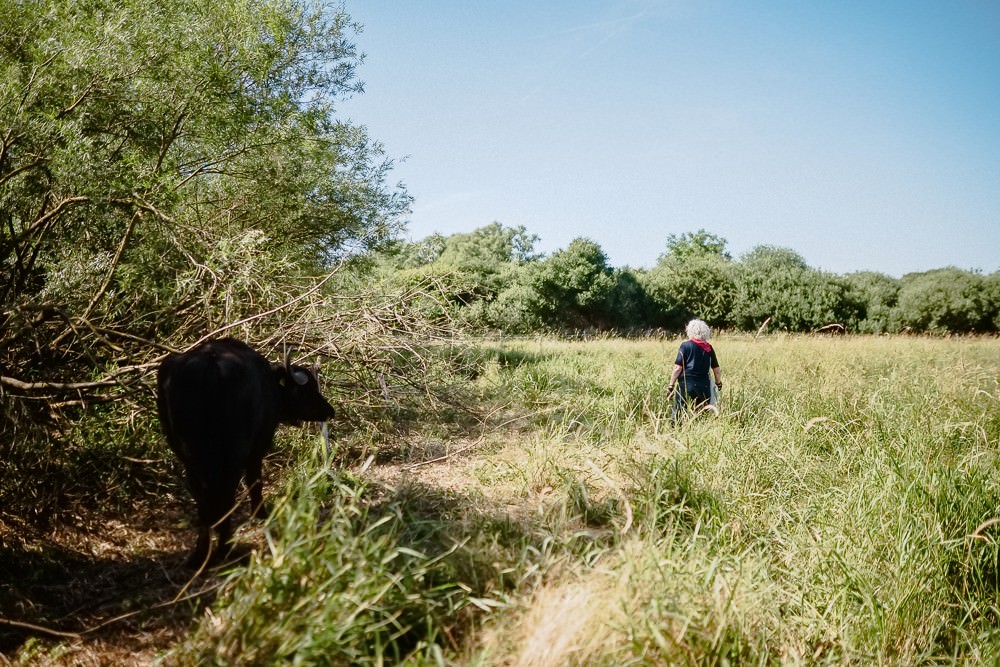 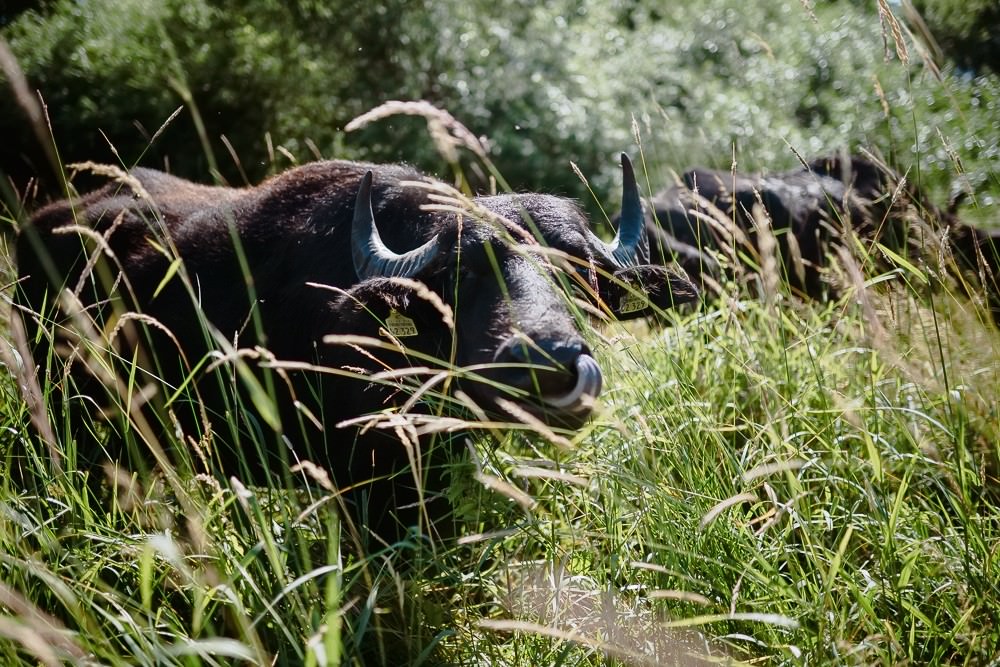 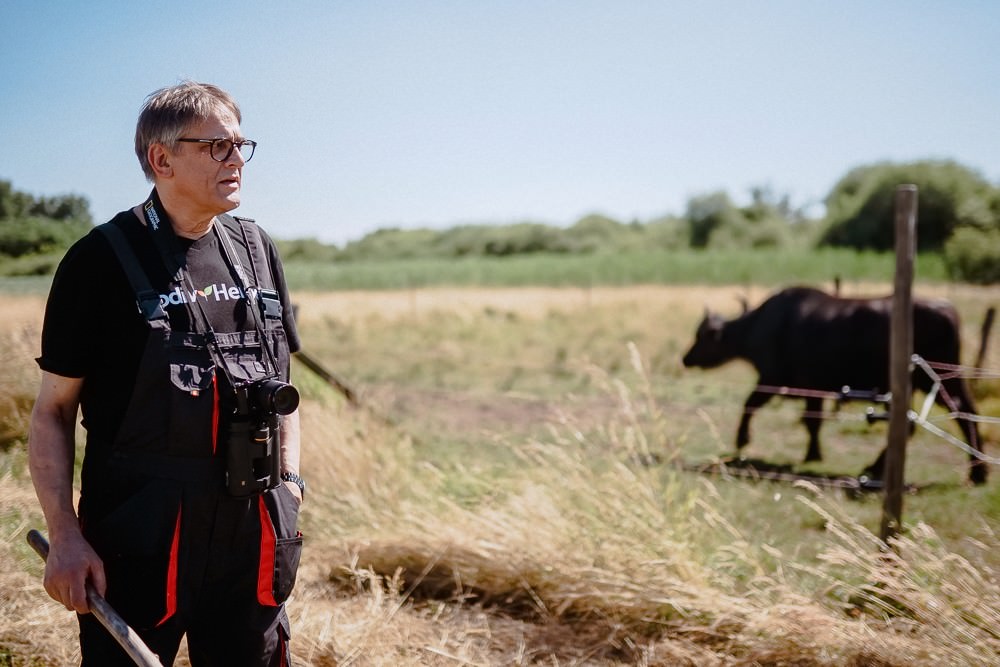 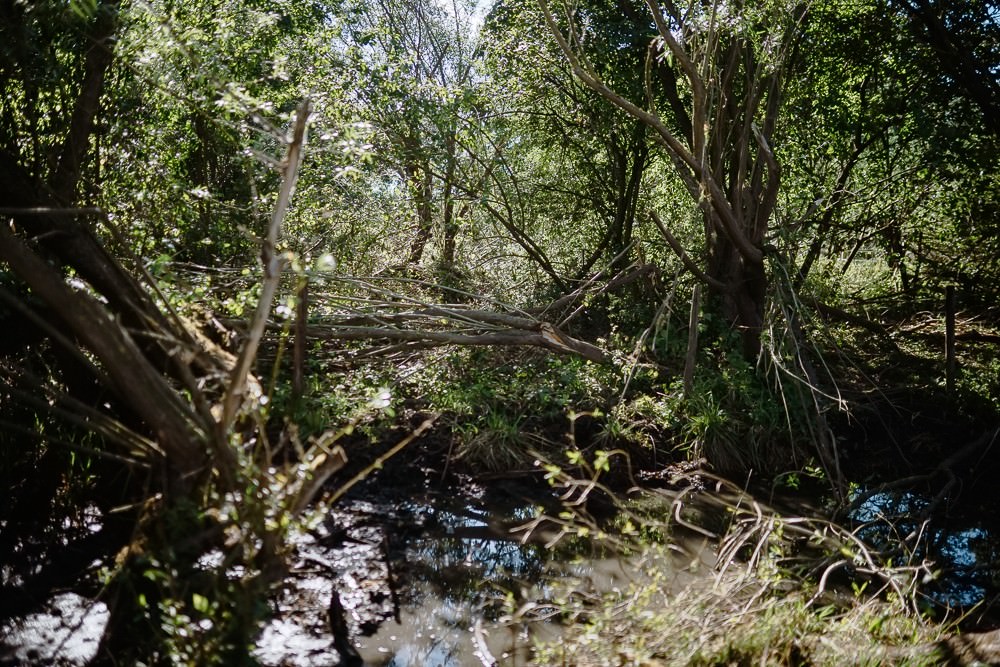 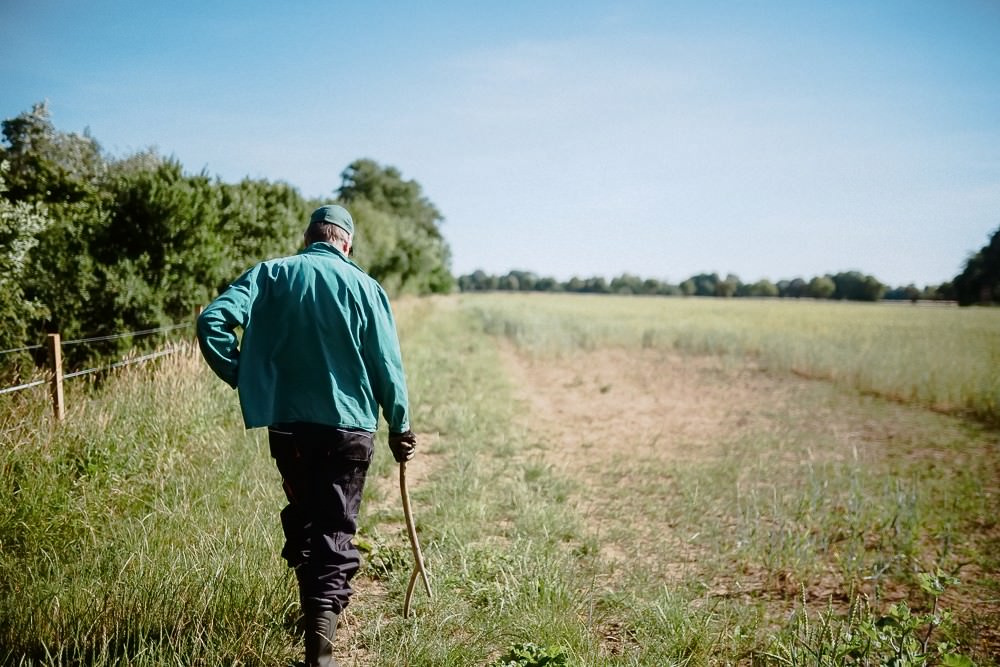 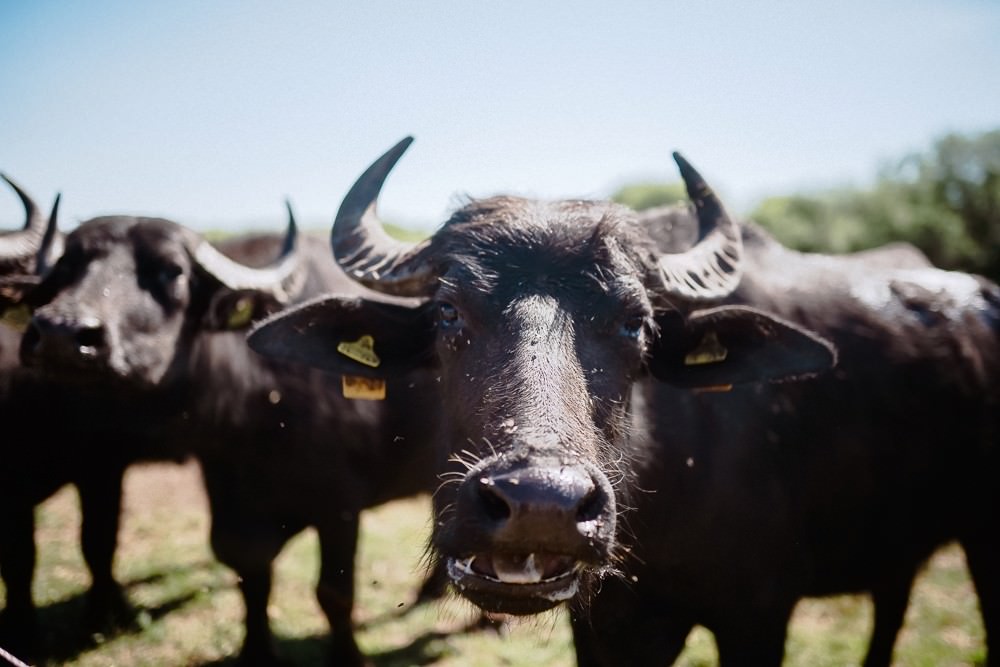