As a child Claus Kropp wanted to become a farmer. Then an archaeologist. Today at the age of 31 he is both. In Lorsch he found happiness – in the experimental archaeological open-air laboratory Lauresham.

Although Darius and David might seem to be mastodons, they are the robust and good-natured specimens of an old cattle breed. And they look as if someone had taken them out of a picture book. Or rather: out of the 8th century. And this is exactly what they are supposed to look like in Lorsch on this Sunday. The two of them draw a wooden cart to the “Königshalle” (the King’s Hall) in Lorsch and accompany a medieval group of people who look like they were the retinue of King Louis the Pious. And because the two of them – in spite of being good-natured mastodon-like characters – are also stubborn, Claus Kropp has to come along with them. Dressed in a woolen gown and leather slippers the archaeologist leads the two along the street passing by cars and traffic signs. And then back again to a place that looks as if it was 1,200 years ago: to Lauresham. To a place they call experimental archaeological open-air laboratory. And which is basically nothing else but history come to life. And something like Claus Kropp’s dream who as a child always wanted to become a farmer, then an archaeologist – today he is both. 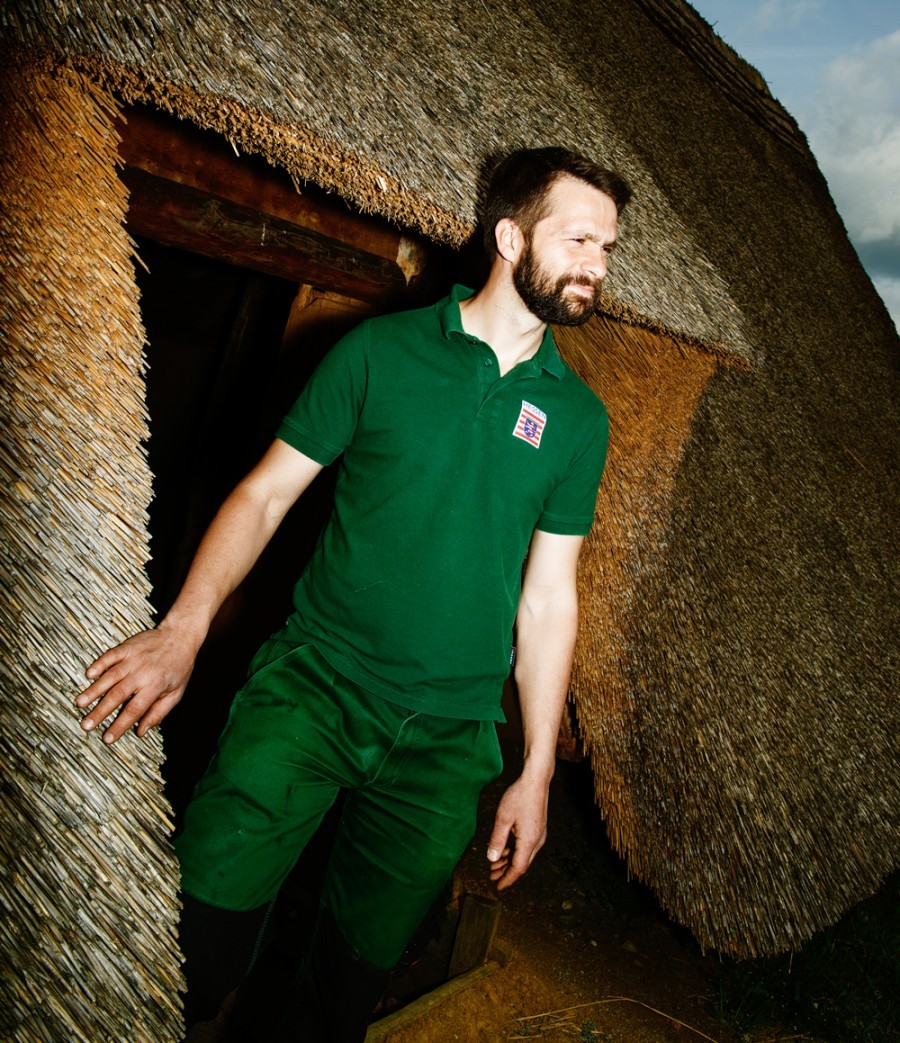 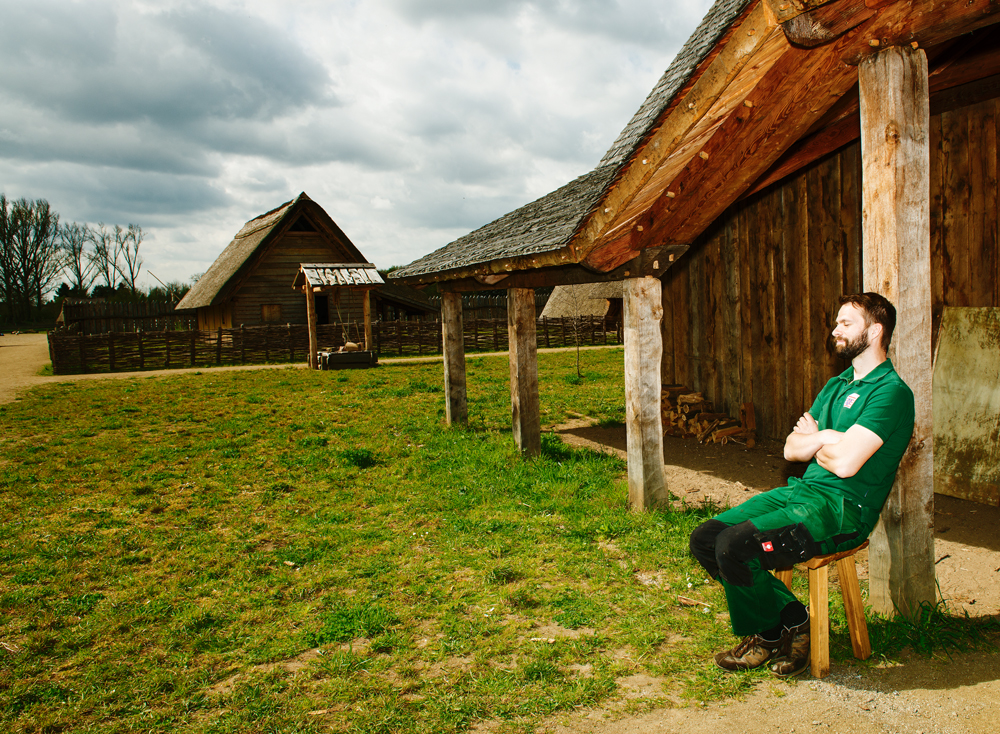 Since 2013, the 31-year-old archaeologist manages a kind of early medieval manor – a “farm estate with a central function” as he himself calls it. With living animals, reconstructed houses and tools. “Everything we show and use here, was used in the past – the only question is: how? Which carts did the Carolingian peasants go to war with? Where and how did they live? And how did they dress at such an army train and what weapons did they carry with them?”

This Sunday, there are some people present who give answers to these questions – the group “Reges Francorum” has come to Lauresham at Claus Kropp’s invitation, and its members are specialised in early medieval life: They regularly trek to open air museums together and test the suitability of the sites’ inventory for daily use. But first of all, the Middle Ages enthusiasts lend the “laboratory manger” a pair of Carolingian leather slippers, whose usual working gear at the open air laboratory has indeed nothing to do with historical garb. Then the men and women make themselves at home in the 21 buildings, which were constructed last year with the help of archaeologists, historians and workmen specialising in old techniques. The entire manor comprises not only the manor house, but also barns, stables, workshops and a chapel.

When Lorsch Abbey was designated a UNESCO World Heritage site in 1991, there were only very few buildings left: The famous library of the once ground-breaking Benedictine abbey had long been scattered, the majority of the buildings had been demolished over the centuries. When Claus Kropp as a student at Heidelberg university started to guide visitors through the grounds in 2005, he actually did not have a whole lot to show: the “Königshalle”, a fragment of a church on a glacial sand dune, the abbey wall – and, to cover it all, a lot of greenery and foundations underneath the lawn, so nothing really that would have helped to imagine how the people in Carolingian times actually lived. Then in 2009, the city, the state of Hesse and the federal government decided that an extensive refurbishment and expansion measure of the World Heritage site should be carried out. Such as for instance a kind of museum village east of the abbey area at the edge of the town. With animals, houses and great aspirations: everything in Lauresham was to be fully functional. And also scientifically sound. 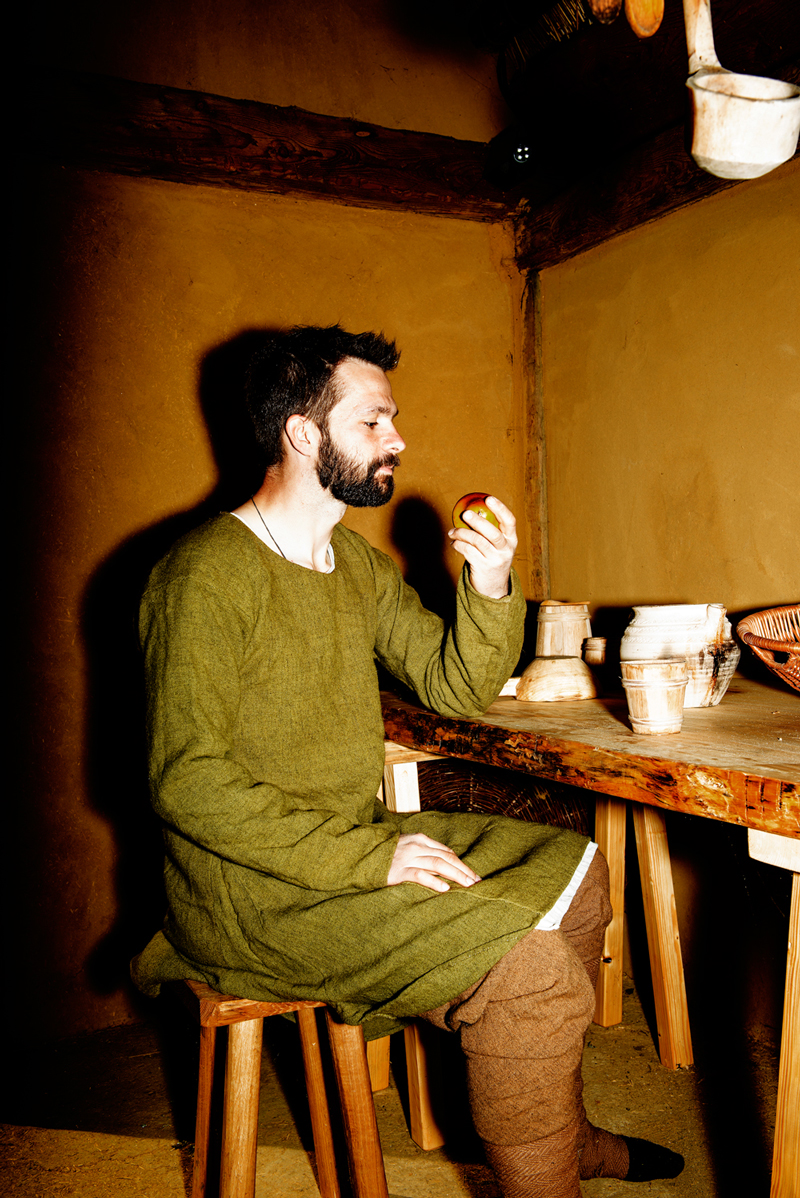 This is what everyday life could have looked like in Carolingian times. Archaeologist Claus Kropp wears special clothing for the photo shoot which was fabricated according to historical models.

Since then, Claus Kropp from time to time leads his oxen through the village and sometimes enacts scenes as they could have taken place in the lives of the lord of the manor and his subjects. He himself ploughs the fields, takes care of the animals, sows and reaps – all of it for the sake of science. On this weekend in March, the topic is warmth. It is cold and rainy. Meaning it is ideal weather for heating up the houses really well. If it works. Because in one of them the smoke does not really want to escape, whereas in the next one the icy draughts come blowing through the cracks – which the “Reges Francorum” people unceremoniously stuff with wool. “When archaeologists find a Carolingian house they are not usually entire houses, but time and again fragments which allow to give clues with regard to building materials and different variants,” Kropp says. What the roofs, the doors and windows looked like – this is tested and tried here along with temperature and air analyses.

Which plants, which fruit and which grain did the people of the Carolingian times eat? Relatively much is known about this because of, for instance, Charlemagne’s crown land regulations as they were handed down to us. But nothing is known about why the Carolingians made hilly fields. Or why they cultivated grain and gold-of-pleasure together. The newly built Lauresham never existed like this – and definitely not at this location which was regularly flooded by the river Weschnitz. In Carolingian times, the actual settlement outside the abbey must have been situated roughly at the place where Lorsch is today. Furthermore, the model settlement displays different types of houses as they were excavated in different regions of Germany, in Mannheim, Holzheim near Fritzlar, Speyer or Kelheim in Bavaria. “Even back then, there were regional differences with regard to construction methods, actually just like today,” Kropp says, and then he lists all that you can see in Lauresham today: houses with thatched roofs or shingles, with walls made of timber, clay or stone. Each of the 21 buildings has an archaeological model. “What we show is a typology of possibilities.” 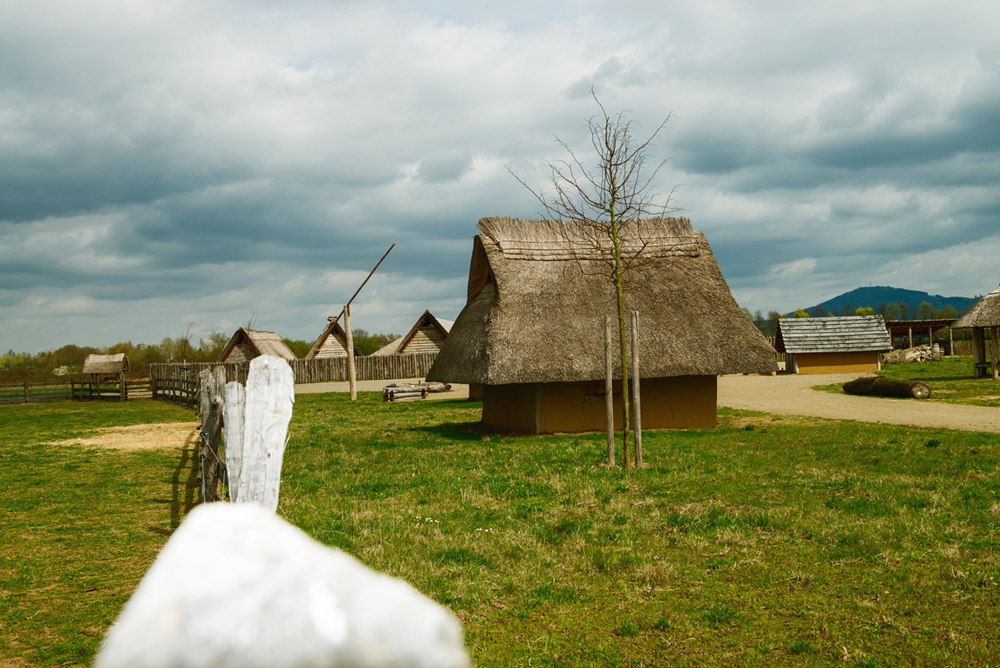 The area of Lauresham comprises 4.1 hectares – another five are privately cultivated by Claus Kropp who is a member of the “Verein zur Erhaltung der Nutzartenvielfalt” (association for the conservation of crop diversity). Here, he and his family raise chicken, sheep and goats, grow tomatoes and beans. “Those varieties, however, which are hard to find these days.” Lauresham, too, is to become a place of conservation: the animal species, too, are chosen in such a way that they come as close to their historical counterparts as possible. Along with the two oxen, the chicken, the six sheep, four geese and two dogs also, for instance, some “Düppeler Weideschweine” (a pasture raised pig species) moved to the site – since in all of Germany the so-called silvopastoralism has virtually died out. Claus Kropp wants to change this and plans to send his pigs to a forest area of one hectare soon – for pannage. 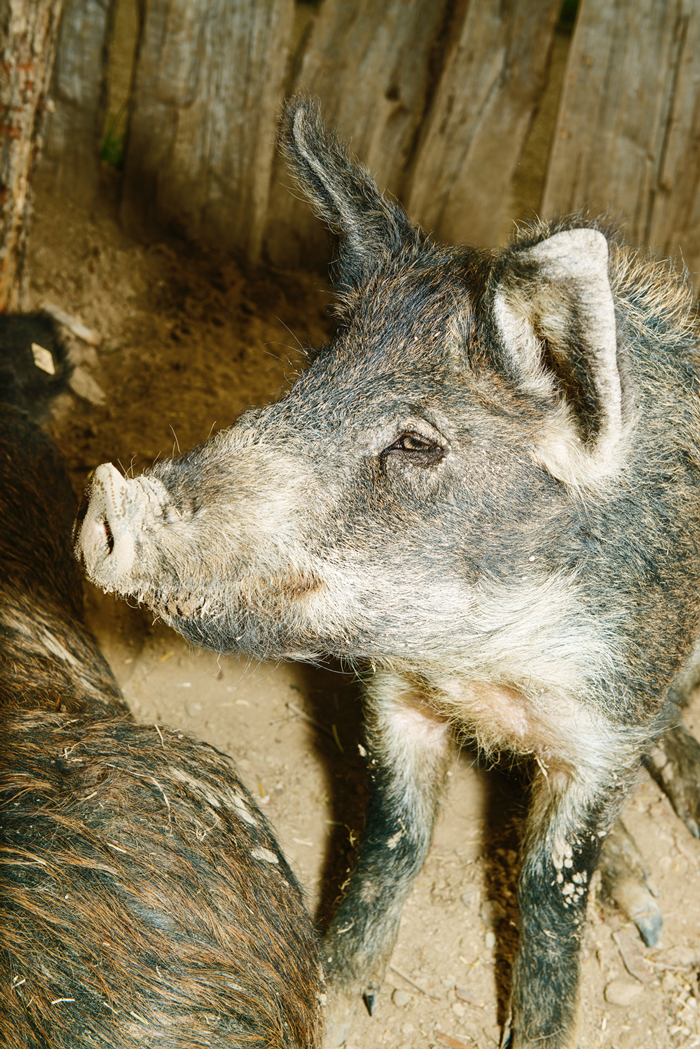 In a certain way, his career is following that of his grandfather who still raises dairy goats in America up until today. But who is not an archaeologist at the same time, not a scientist who writes on his doctoral thesis after work. Did he imagine to ever come so close to his dream? Claus Kropp laughs. “There are few people who turned their wishes into reality like I did.” What aims are still left then? His dreams are of a rather short-term nature. “Building a mill like they existed in the past would be a challenge.” And then he talks of the three-field crop rotation cycle which he now follows cultivating the soil of Lauresham in springtime. With Darius and David drawing the plough. Claus Kropp found happiness – somewhere here, between the little houses of a place which never quite existed in reality. 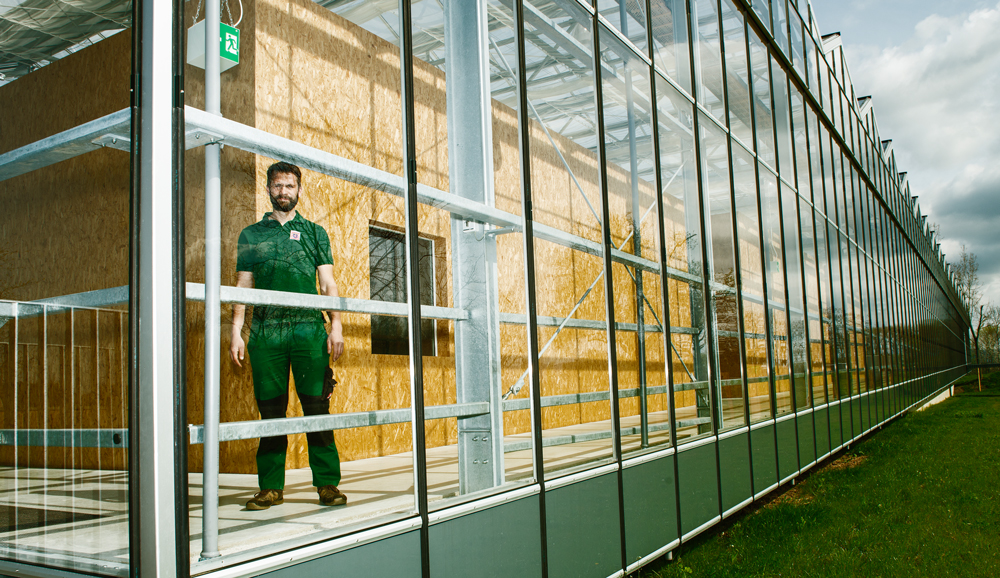