Suddenly the earth shakes.  A mob of what looks like prehistoric animals, some weighing up to 170 kilogrammes, all of them fast as lightning, is in uproar. Heavy rhythmic stomping sounds drone from the Mhou Farm into the beer garden, where guests sitting under parasols ask themselves: Are we in Rülzheim? Or Jurassic Park?

Rülzheim, situated only a few kilometres southwest of Germersheim, holds a secret: It is the home to Germany’s oldest ostrich farm, the Mhou Farm of Christoph Kistner and Uschi Braun, who 25 years ago decided to devote not only their professional lives to the ostrich.

“I guess there was some loud noise or a hot-air balloon in the sky—or perhaps a bird of prey,” Christoph Kistner says, the tension only slowly draining away from his face. The situation of the ostriches in their enclosure has eased and the long-necked animals as big as two and a half metres start to graze peacefully. “As if birds of prey could harm them,” Christoph Kistner—master of more than one hundred Palatinate ostriches—ponders. “This kind of anxiety has been part of who they are for millions of years. Once in a panic, our animals are prone to injury, and a broken leg is tantamount to a death sentence because it won’t heal anymore.”

A life for the ostrich: Christoph Kistner and Uschi Braun, the organizers of the Mhou Farm in Rülzheim.

Such was the fate of hen Clara who used to be a star amongst the Palatinate ostrich hens and Uschi Braun’s favourite. With her world-record breaking egg weighing 2720 grammes she even became a global ostrich star—until her tragic accident. Ostriches fortunate enough to hatch and grow up on the Mhou Farm in Rülzheim usually have a wonderful and relaxing life ahead of them. Christoph Kistner and his wife run a farm for breeding purposes only, granting the animals a lot of space, variety and balanced nutrition. The animals are not slaughtered as a matter of principle, the splendid specimens are far too valuable for that anyway. 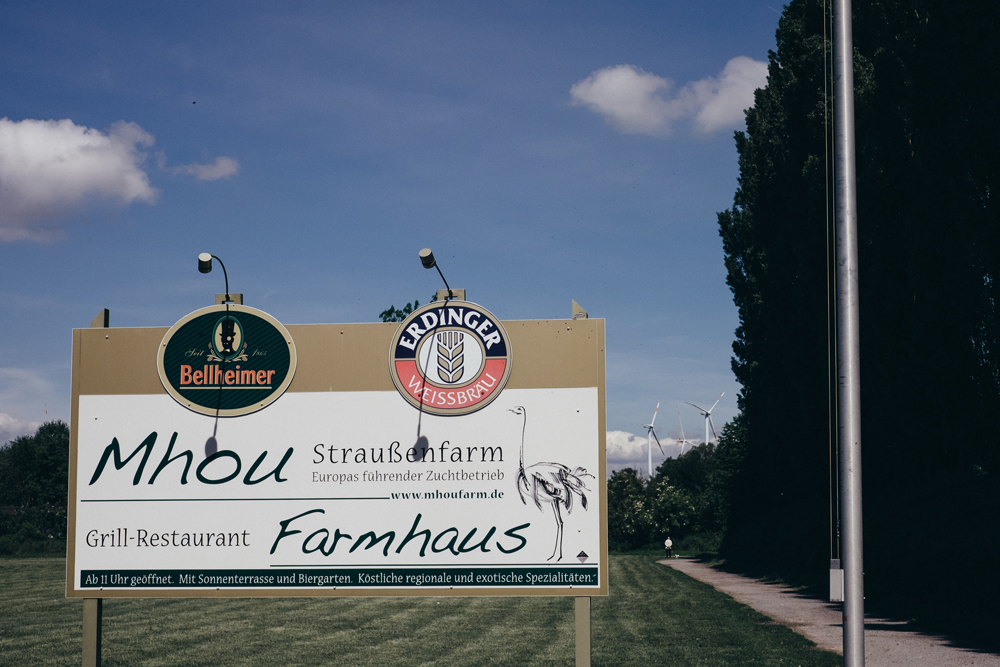 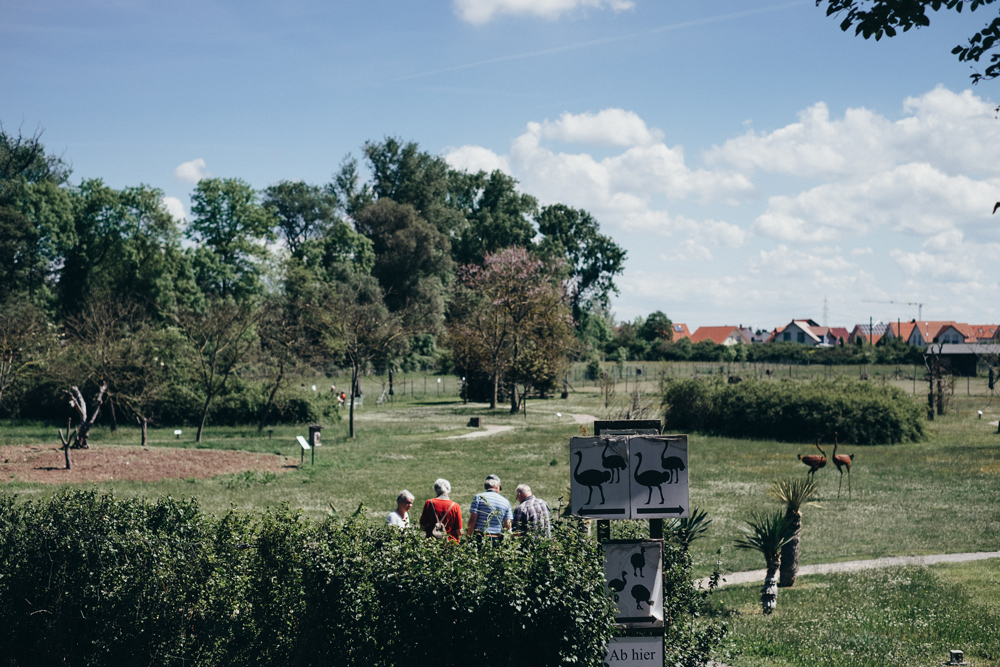 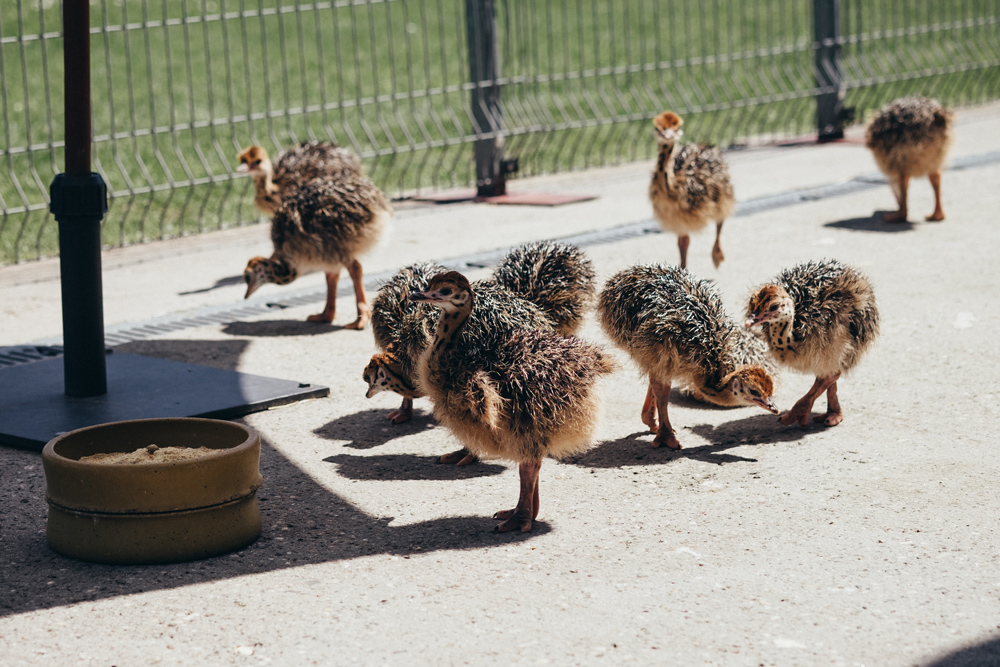 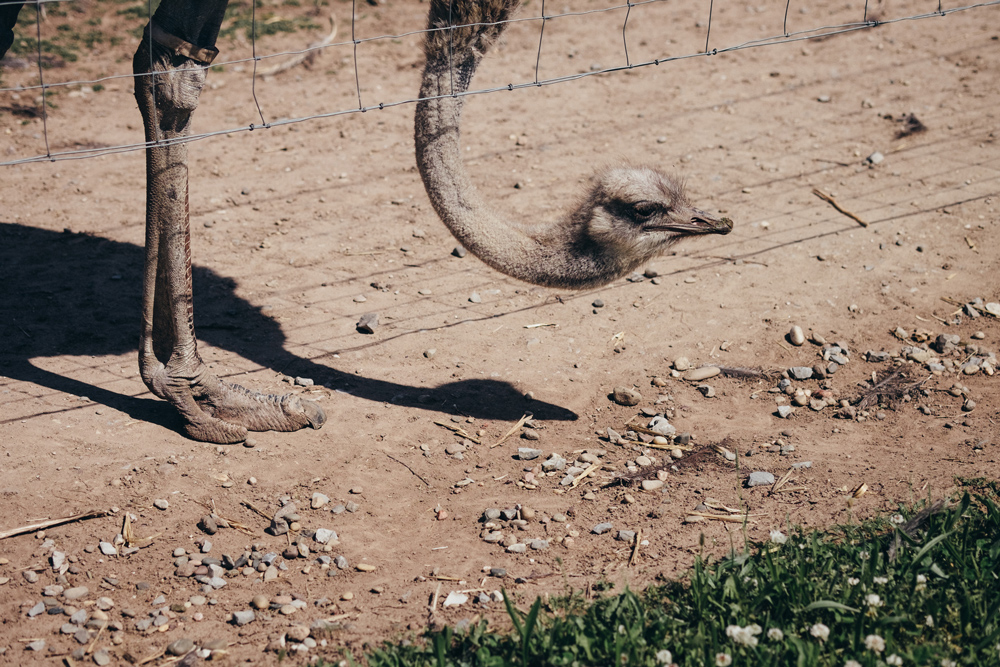 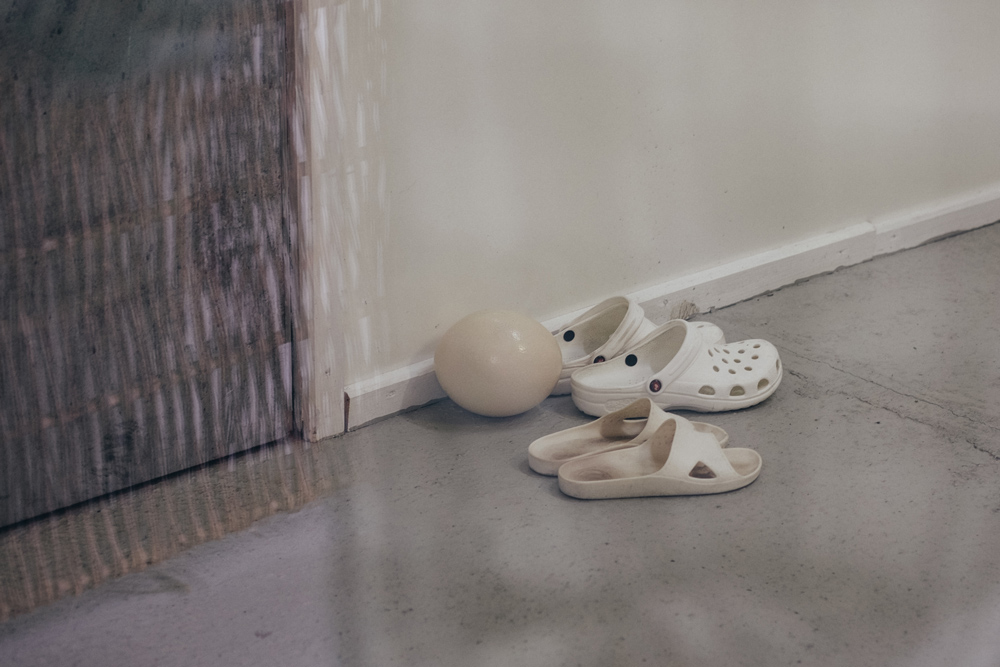 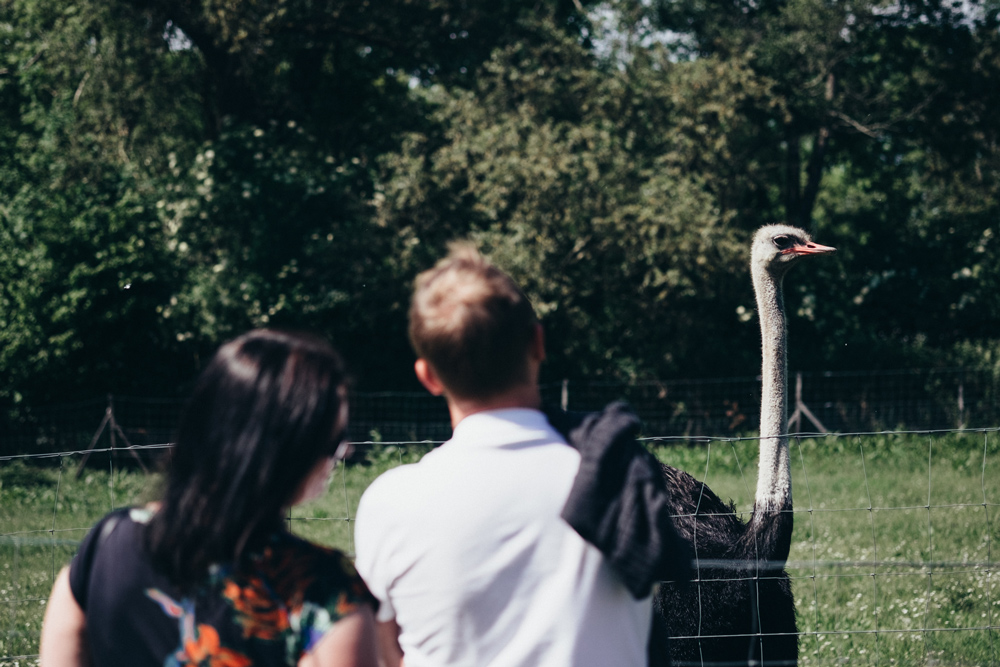 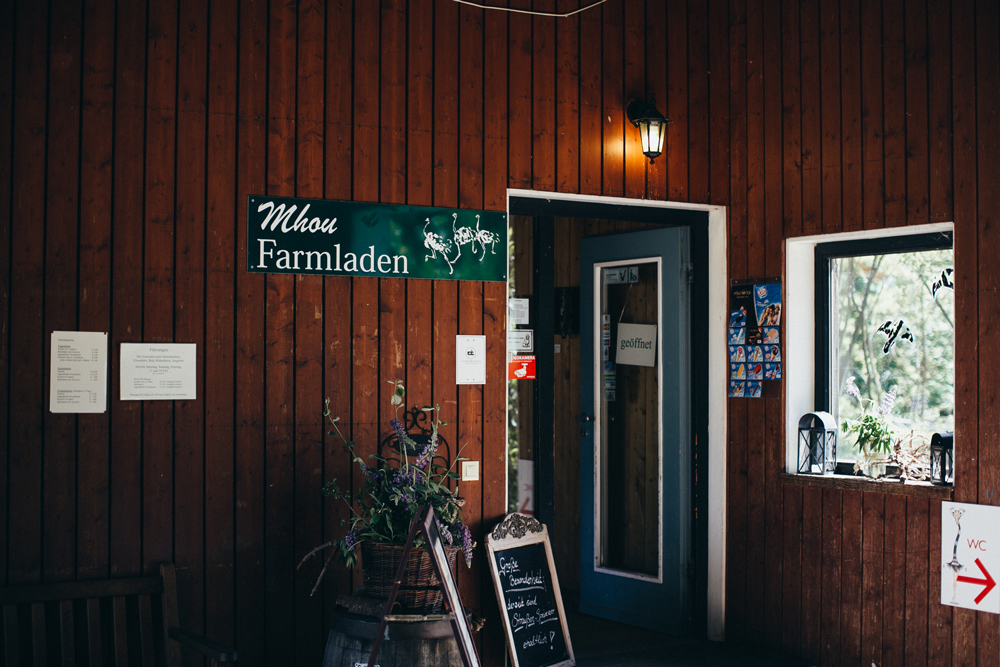 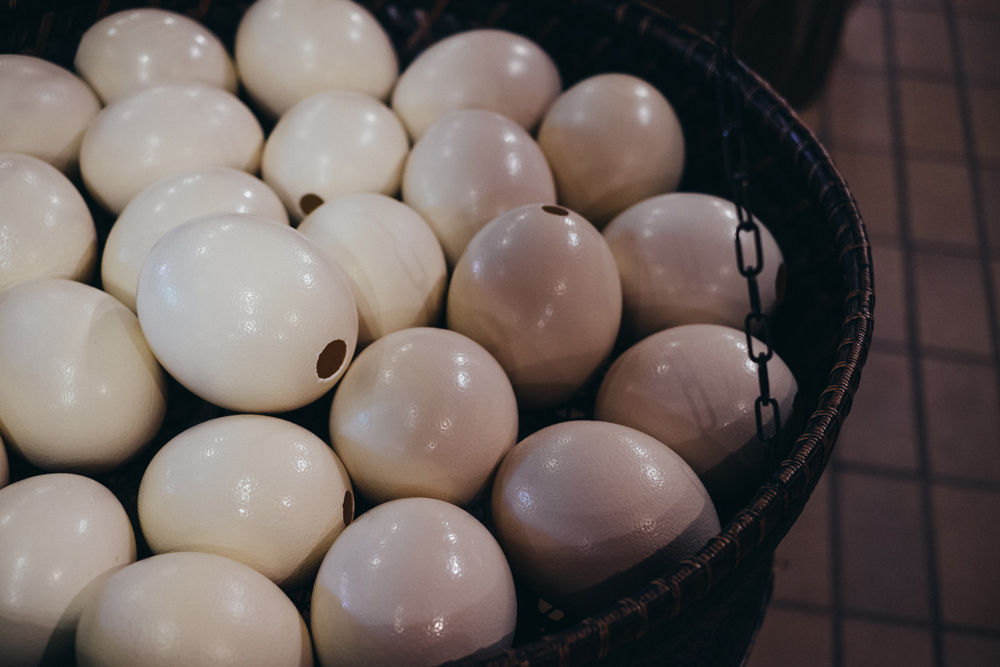 “We have a very close relationship to our ostriches. Not only do we know the name of every single one, but we also closely scrutinise their development, even the exact genealogical relationships within the population are known to us. Everything is precisely documented and accurately recorded. We even have the genetic fingerprint of each animal. We are thus able to optimise breeding and specifically combine single characteristics—you will not find this anywhere else in the world.”

25 years of experience in ostrich breeding—no other ostrich farm can look back on such a long tradition in Germany. No wonder that Christoph Kistner made a name for himself as an ostrich specialist among experts, by whom he is called the Ostrich Pope (Straußen-Papst)—a title of respect which he gained for himself through diligent research, fundamental work and unrelenting study of the animals.

“In 1992, my wife and I came to the conclusion that something had to fundamentally change in our lives. We both worked as journalists for broadcasting services but rather wanted to travel and see the world. As a passionate sailor, I would have sailed the seven seas for the rest of my life, but things turned out differently. While we were travelling the world we once stayed in Zimbabwe where we came into contact with the animal which was to change our life: the Zimbabwe Blue Ostrich. The Shona people in Zimbabwe call them ‘mhou’, this is where the name of our farm comes from.”

With an audacious idea, a lot of newly acquired know-how and a plane-load of fully-grown ostriches the two adventurers went back to their old home—fully believing in the success of their venturous undertaking.

Meat consumers in Germany were unsettled at that time because of several meat scandals; the red, tasty and extremely low-fat poultry meat seemed to be the ideal substitute.  “But we definitively counted our chickens before they hatched though, since we didn’t take German bureaucracy into account,” Christoph Kistner remembers. “We also had to work hard to convince people in the matter of breeding, but the main challenge was to gain access to the German meat market. We were definitely not welcomed with open arms.” Even today, there still are the piles of the correspondence from that time. “It took five years until we at last had all the licences in 1998. The first business in Germany with a permission to slaughter authorized by all the relevant ministries—that was a landmark case.”

Kistner’s office is situated at the end of a side wing in a former youth hostel now serving as an administrative building and a farm marketplace. From here the ostrich farmers look onto a former tennis court, which used to be the place where the young state premier of Rhineland-Palatinate, Helmut Kohl, met the local country commissioner for distinguished gentlemen’s matches back in the 1970s. The other side wing houses the exotic specialty restaurant Farmhaus. The guests are served Palatinate-African fusion cuisine—like ostrich bratwurst with homemade potato salad. On the first Saturday of each month during the summer season Kistner and his team make a so-called “braai,” a traditional African barbeque party, preparing the finest ostrich meat from partner businesses.

Today, the efforts from the first time pay off. Christoph Kistner, who has fought for and promoted the acceptance of ostrich products on the European market, is today considered as an international ambassador of the large African ratite. As an author of a reference book on ostrich breeding, he travelled the world giving presentations to an expert audience. As the chairman of the German ostrich farmers’ association “Bundesverband deutscher Straußenzüchter,” vice-president of the international ostrich association and honorary member of the Japanese breeders’ federation he is globally connected. There is hardly any ostrich farmer in the world whom he does not personally know, and many ostriches originally stemming from his population are now in ostrich farms throughout Europe.

It is also due to Kistner’s ostrich-related network that the whole variety of ostrich products can be presented in his little farm shop in Rülzheim without ruffling a single feather of any of his own animals.  The products range from refrigerated delicacies to dusters made from ostrich feathers, curative cosmetics made from ostrich fat and decorative arts and crafts made from eggs to fine leather products. You can even buy some eggs to use at home. Whoever wants to prepare an omelet in his or her own kitchen should, however, give the right size of the frying pan a thought or two, since one ostrich egg equals roughly 25 to 36 chicken eggs.

Merchandising and ostrich delicacies notwithstanding: The main attraction of the Mhou Farm still is the ratite birds themselves. The African giants fascinate visitors from all over the world, the undisputed superstars being the fluffy ostrich chickens hatching from April to September. And if you— after having taken a stroll over the farm— still can’t get enough you might want to contact Uschi Braun and Christoph Kistner. Because there is simply no question about ostriches that the two don’t have an answer to. 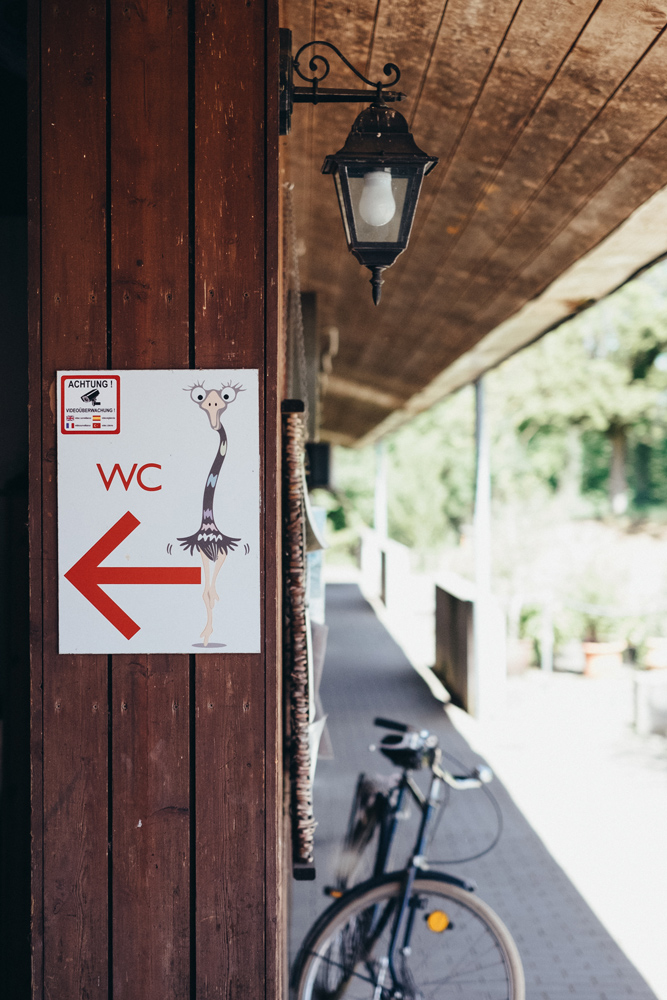 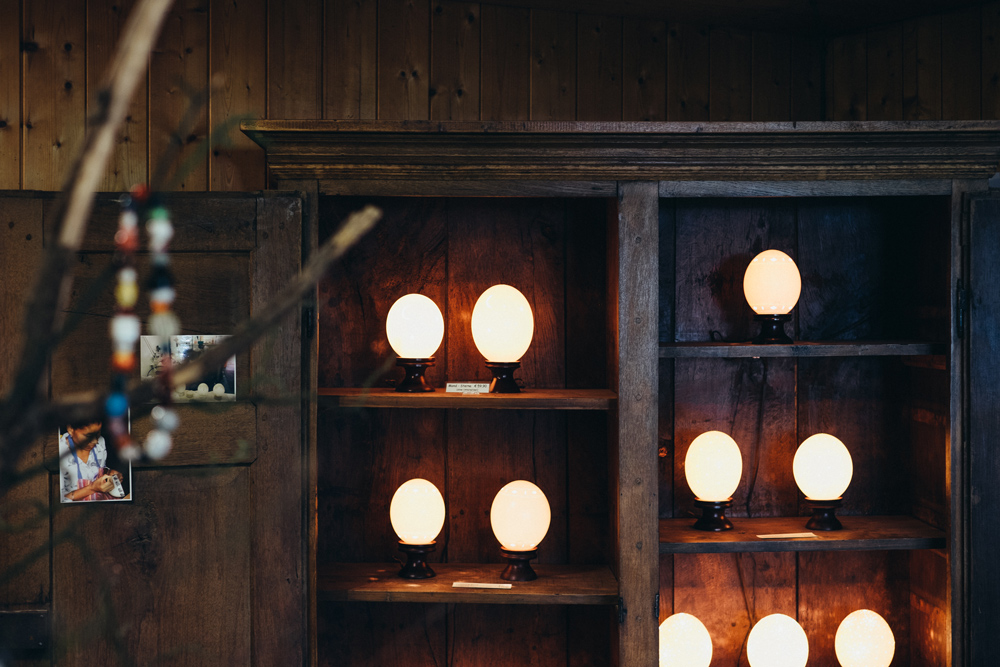 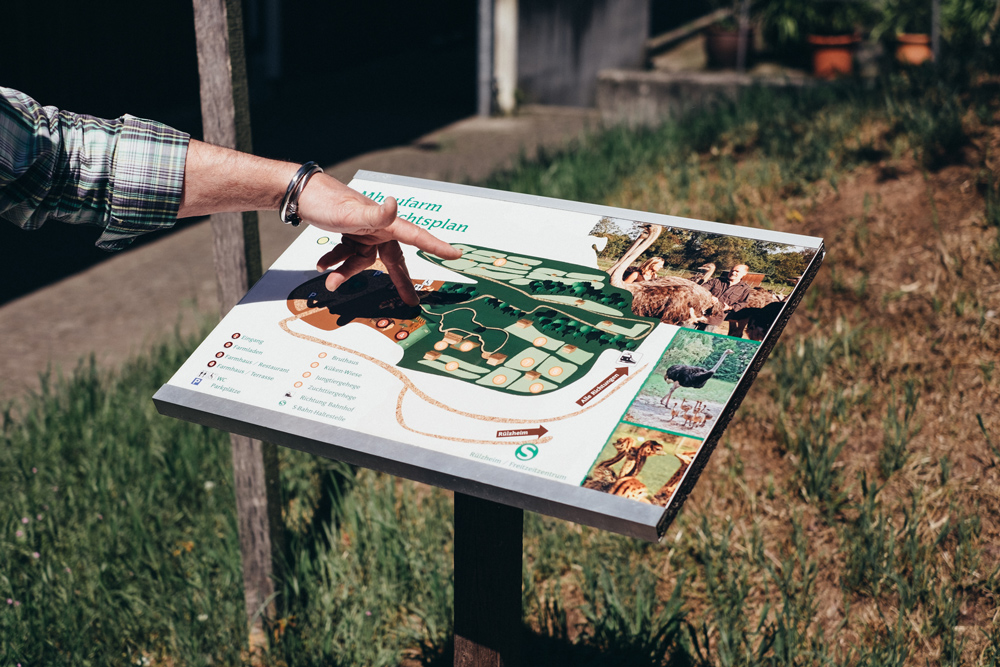 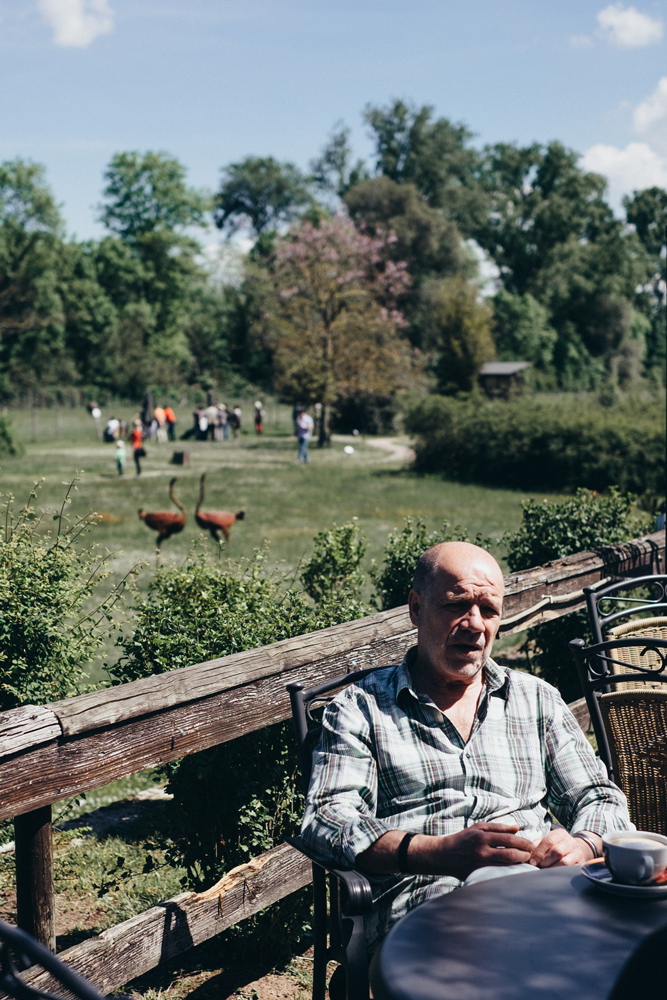 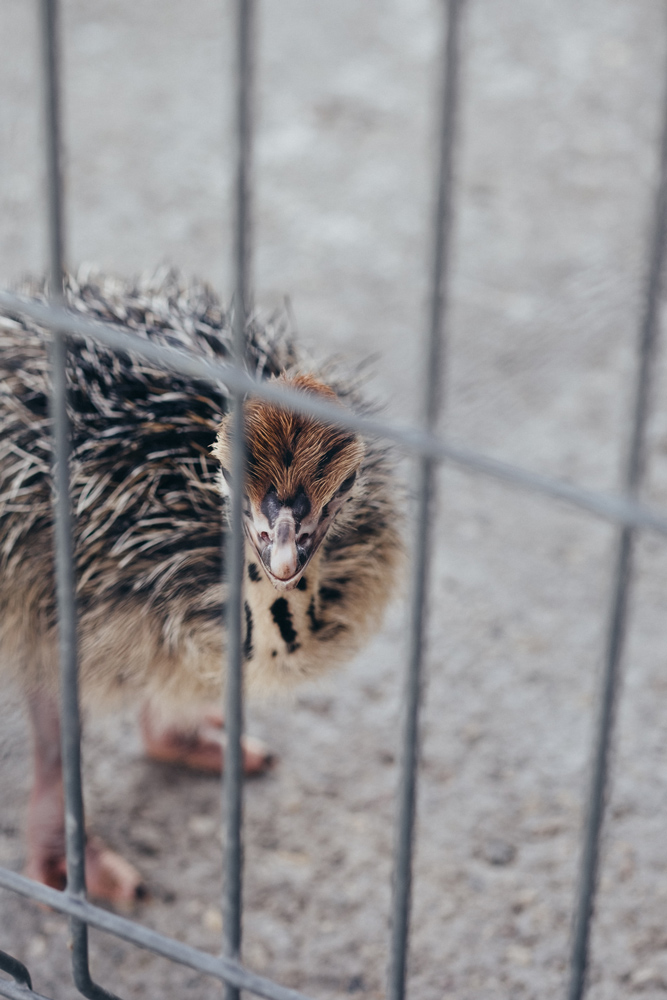 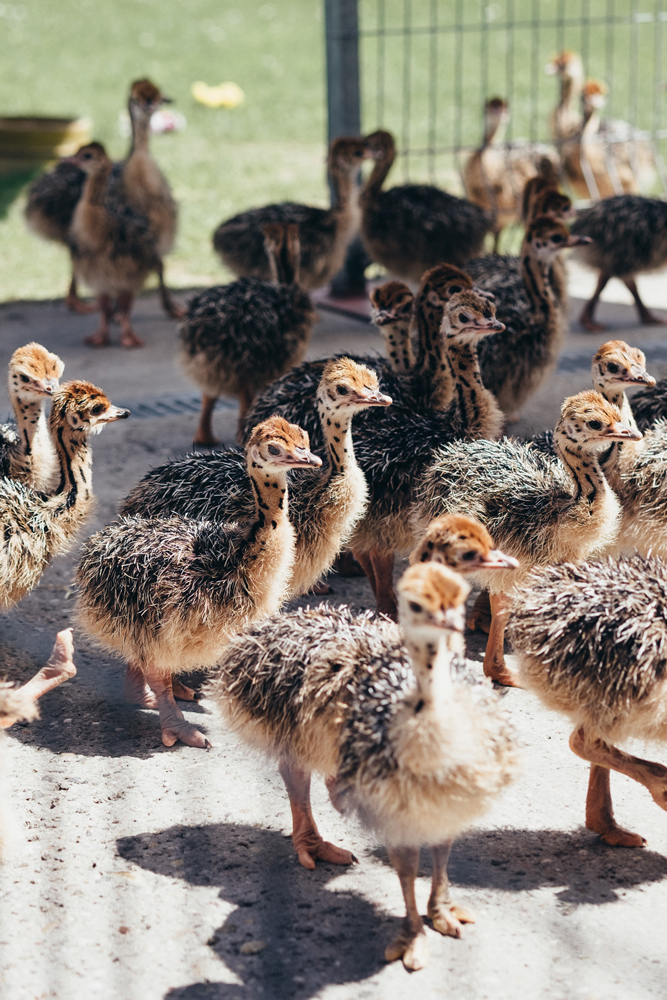 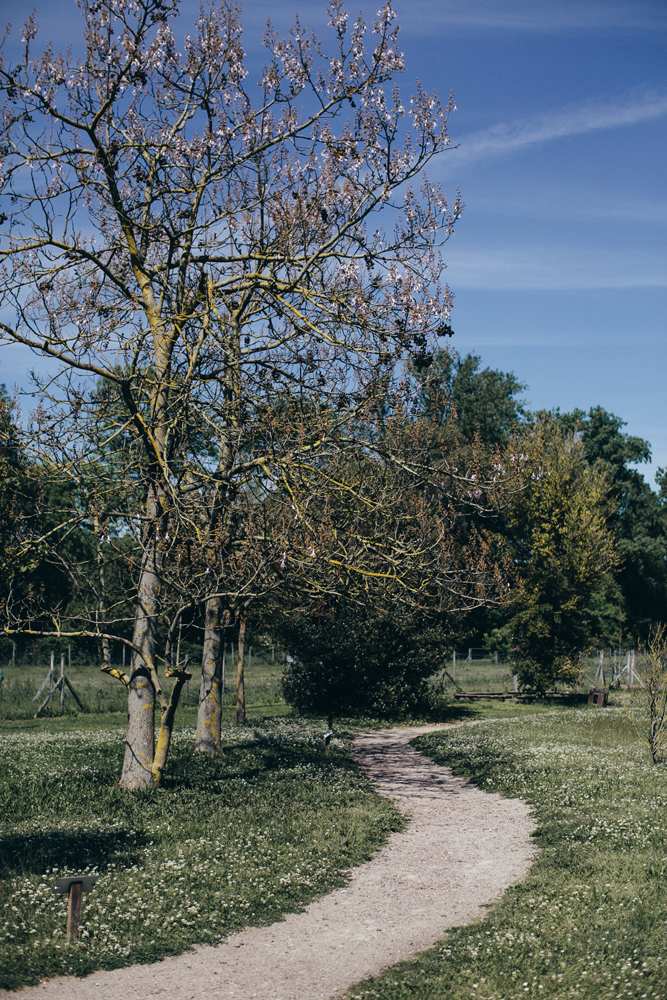 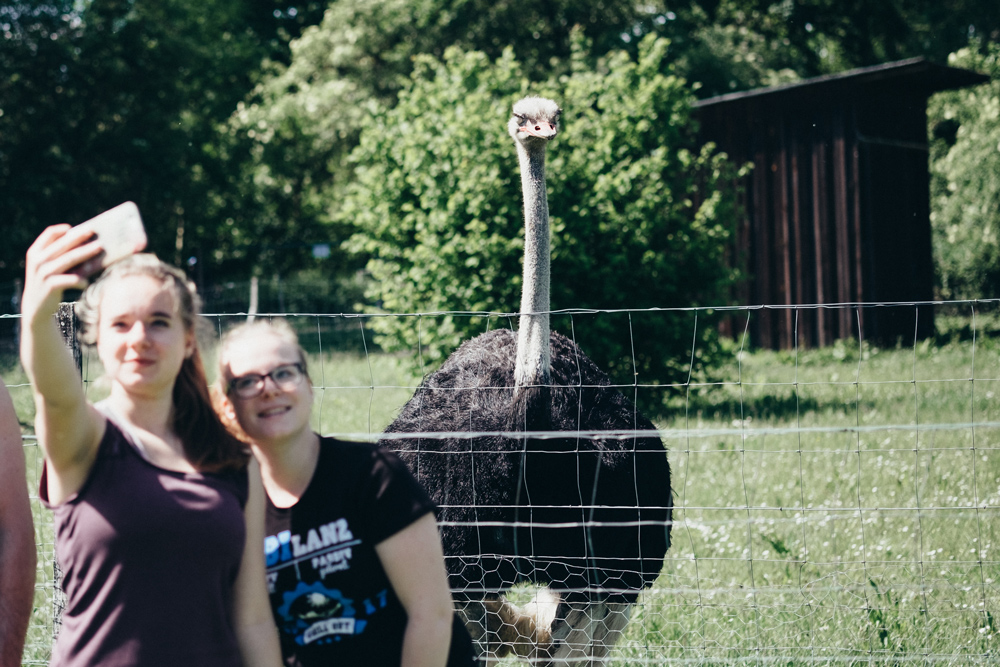 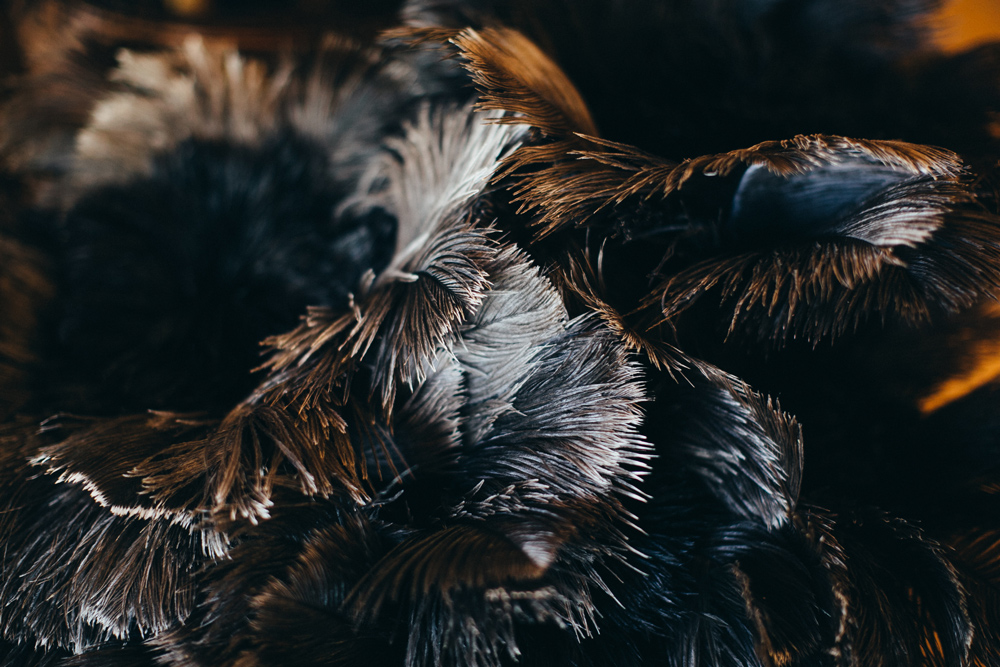 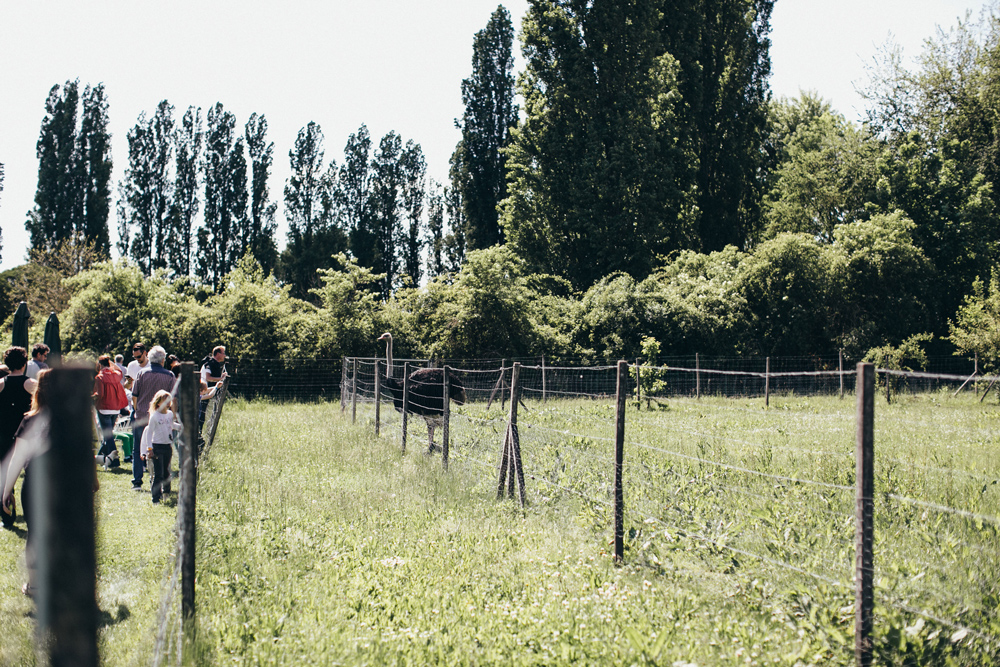