Marcel Willared is a professional beekeeper, one of the few in Germany. Around Hardheim in the Odenwald, his up to 300 bee colonies collect nectar and produce honey varieties that have even won some awards. He started his own organic beekeeping business at the age of 24. In doing so, he not only fulfilled his own dream—but also enabled his father to do so.

Marcel Willared approaches the beehive with quiet steps. He has a smoker with him, from which smoke billows lazily. Nothing else. He wears no suit, no gloves, no protection between himself and the bees. His dreadlocks are tied up, he has a thick beard, wears piercings and glasses. Carefully he takes off the lid of the beehive and sends two clouds of smoke inside. Then he takes out the first frame. It is full of bees. Hundreds of animals, a seemingly chaotic hustle and bustle—at first glance. Marcel explains in a calm voice: “Here, these combs are already covered with wax, so they are already filled with honey.” One row over, several honeybees are filling new combs. They are not disturbed by the beekeeper, continuing to work in peace. “And down there, the drones are just hatching.”

With every word and every explanation, Marcel sorts out the chaos on the frame. A hustle and bustle, yes. But a perfectly organised one. In which every single animal knows exactly what its task is and does it. Effectively, efficiently and always for the good of the colony. A masterpiece of nature.

Marcel smiles. He still thinks this every time he peers into a hive. “I can’t really imagine anything more perfect. Nature has created a miracle there.” His father, Dieter Willared, stands next to it, nods and starts raving as well. “There is no other animal that changes the world in such a positive way as the bee.” Father and son agree in their admiration for the little animals. For Marcel, it even gets under his skin: a tattoo covers almost his entire right forearm. On it are honeycombs—these perfect, hexagonal structures. And a huge honeybee. 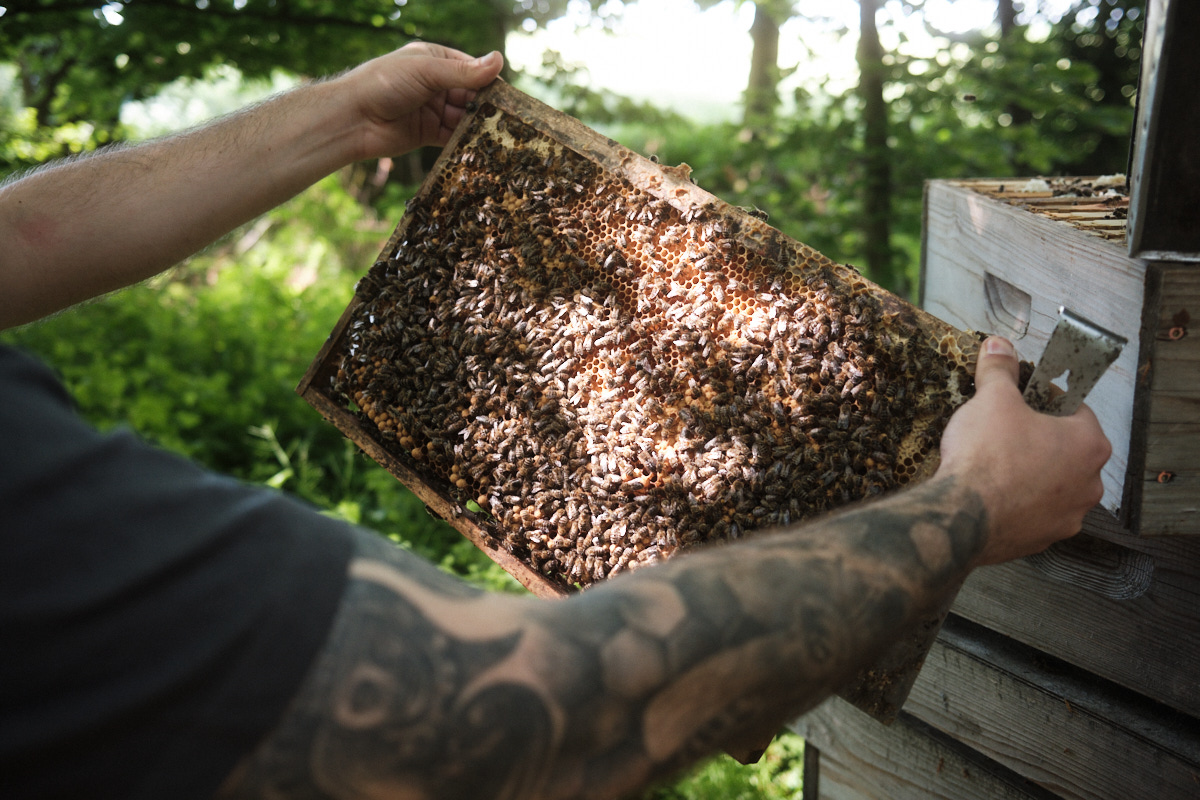 About 40,000 bees belong to one colony—and each one knows exactly what it has to do.. 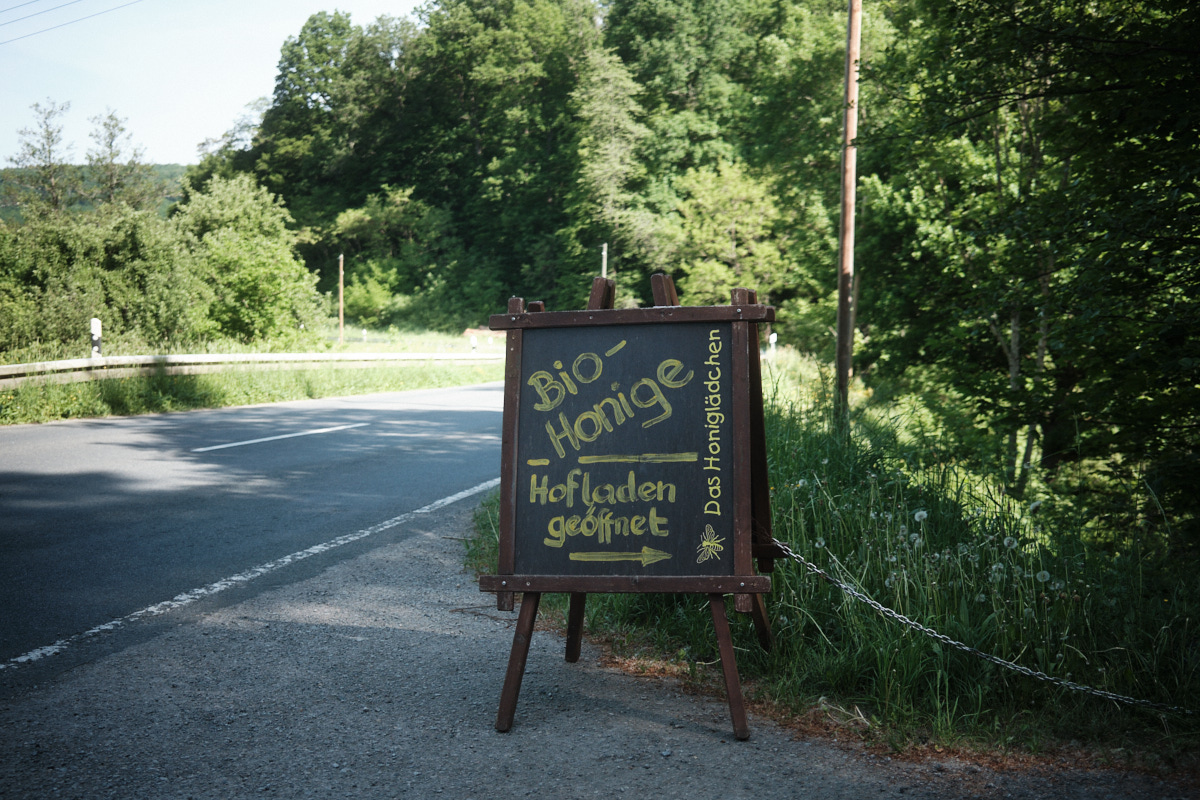 In the last corner of the Rhine-Neckar Metropolitan Region, near Hardheim in the Odenwald… 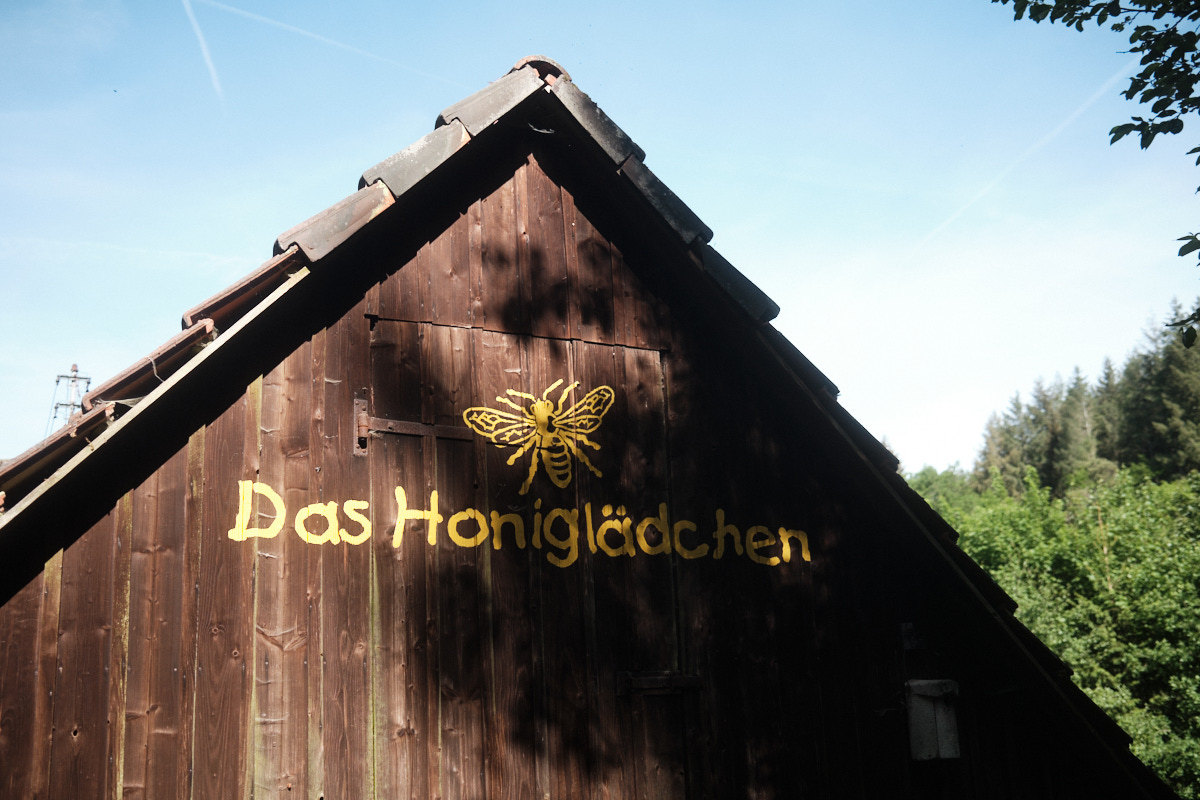 is the headquarters of the Willared organic beekeeping company. 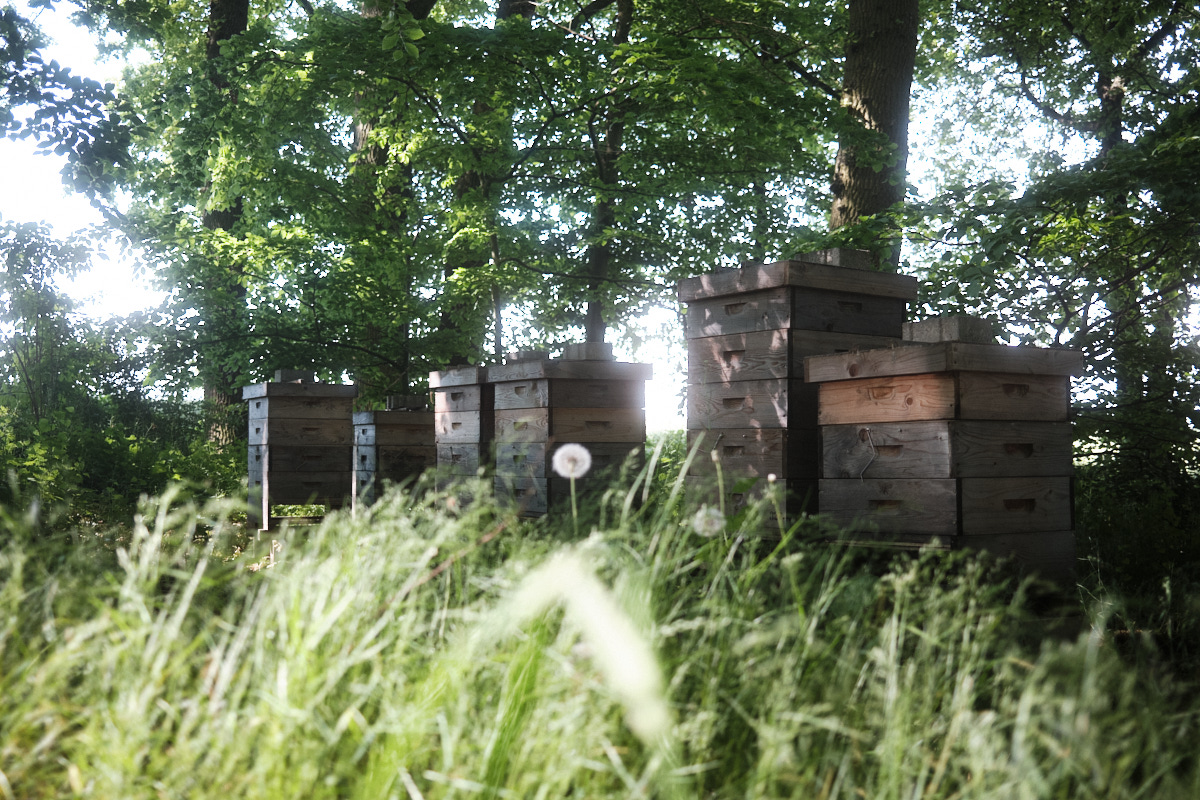 The bees of the apiary collect their honey in forests, fields and orchards. 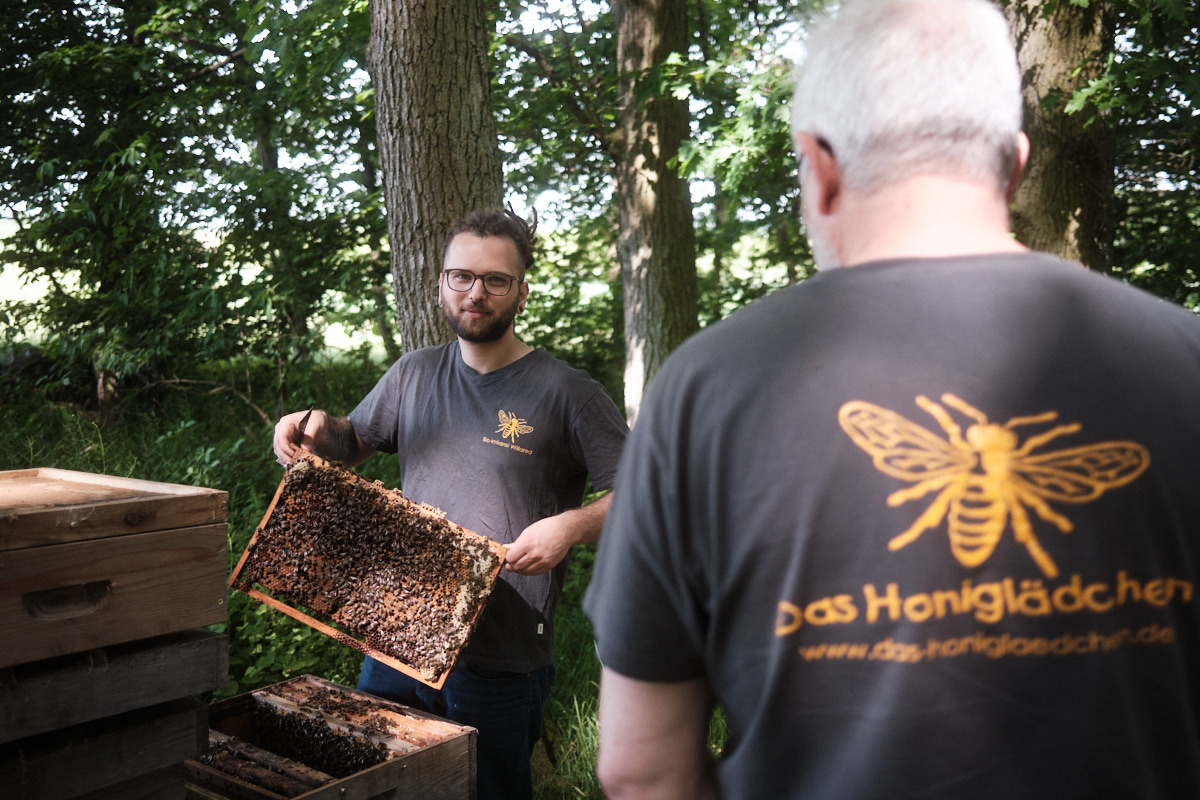 Marcel Willared always works with his bees without a suit. 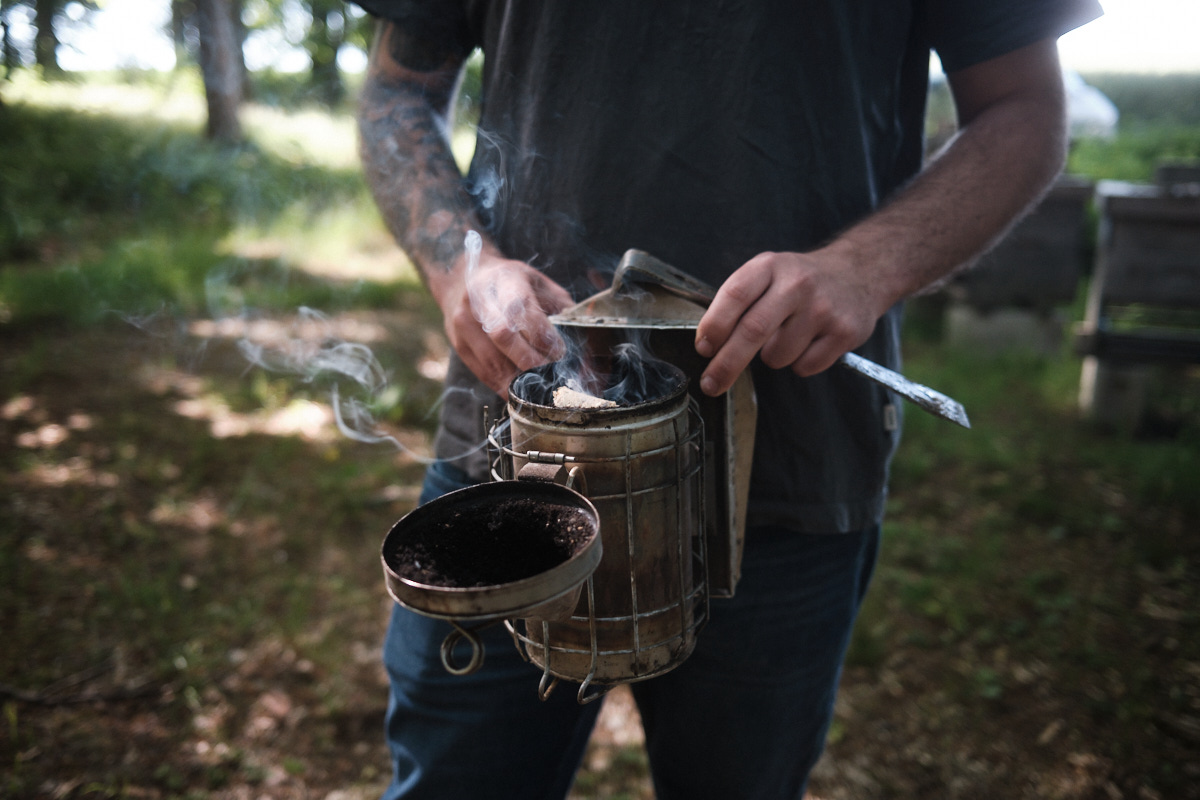 He only has a smoker with him. 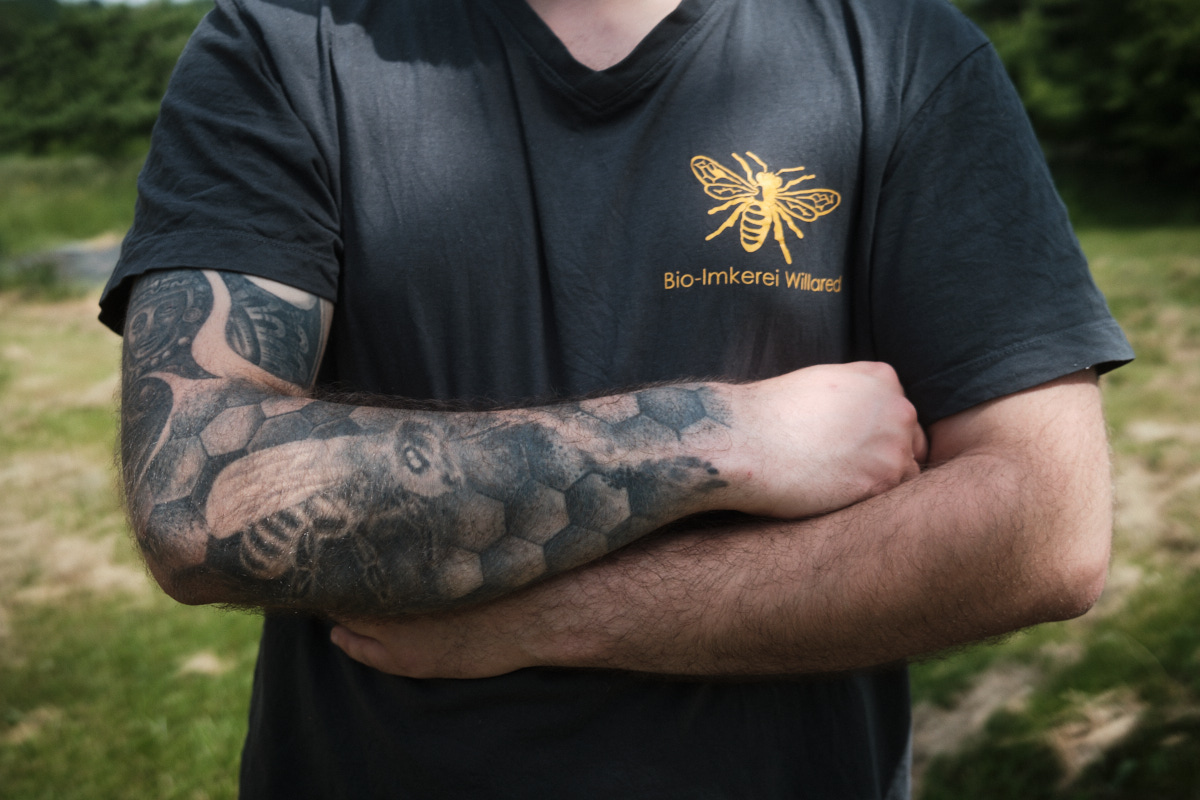 His admiration for the little animals also gets under his skin. 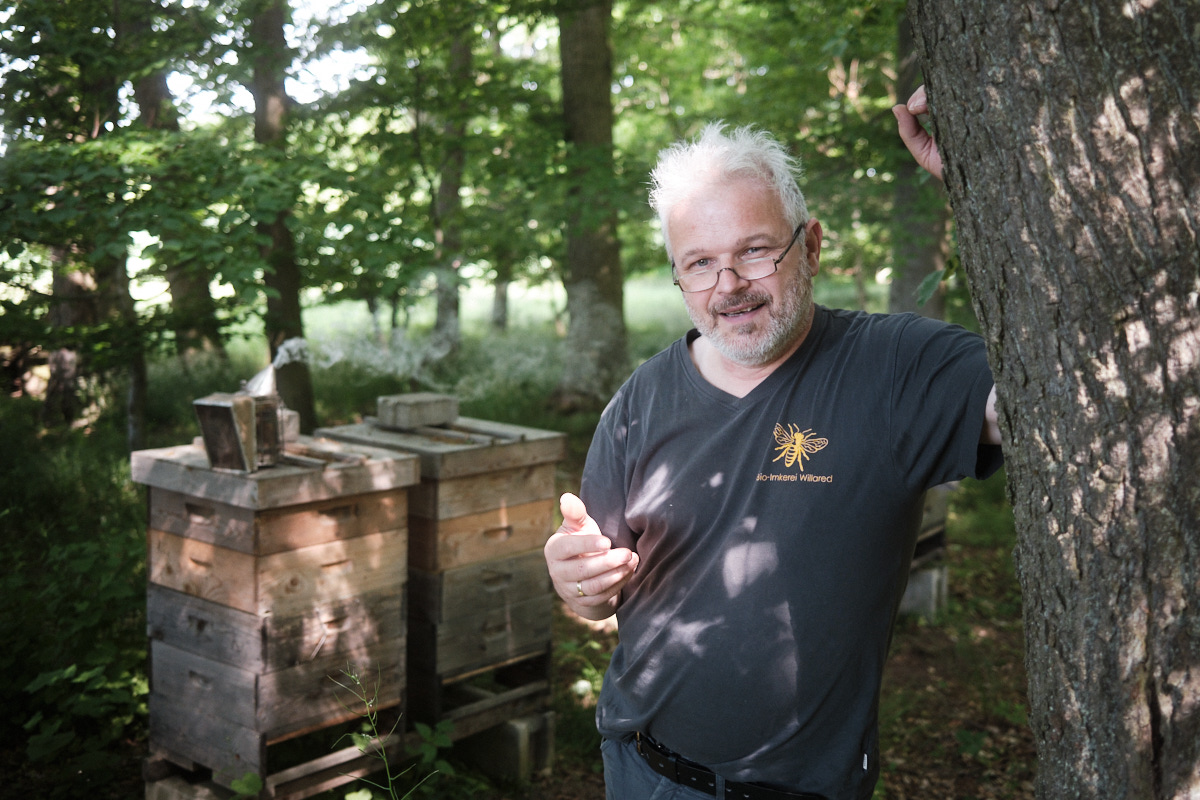 Dieter Willared is a carpenter—but has meanwhile joined his son’s business.

Marcel knew from early on that they would play a big role in his life. He grew up with them. The Willared apiary in the Odenwald has been around for generations as a hobby. His grandfather founded it in 1955 and owned some 120 colonies even then. He passed on his fascination of bees to his son and grandson. However, he shied away from the step into professional beekeeping—the activity seemed far too uncertain to him. And he also urged his son to learn “something reasonable.” So, Dieter became a carpenter. When Marcel told him at the age of 16 that he wanted to become a beekeeper and not just do it as a hobby, he just said that “you have to do what your heart desires” and decided to follow his own advice and also do what his heart had demanded from him all these years: He joined his son’s business and is now its most important employee. Since then, he has been doing carpentry mainly on behalf of the bees. All hives and frames the Willared family uses are built by himself from local wood. The same goes for the shelves and the sales stalls.

Marcel learned his profession at the Fachzentrum Bienen und Imkerei in Mayen. In Germany, no more than about 20 beekeepers are trained per year. “Not even half of them pursue beekeeping as their main occupation afterwards,” he says. He was by far the youngest in his year of training. After completing it, Marcel travelled through Germany, gaining experience with other professional beekeepers. In 2017, he flew to the New Zealand summer during the quiet “bee winter” at home and learned more about the production of Manuka honey. To produce this honey, the bees collect the nectar of the South Sea myrtle. The honey is antibacterial, used as a natural remedy and can cost up to several hundred euros per kilo. “It was a great experience.” In 2019, at the age of 24, Marcel finally took the plunge into self-employment, supported by his father. His mother Stephanie also lends a hand. She is responsible for marketing and sales.

An organically grown, locally produced and fairly traded product—Marcel has set himself high standards for his honey production. He works according to the strict guidelines of the Biokreis association. Their limits for pollutants are much stricter than those of other organic associations. “The question is usually: At what point are the pollutants harmful to humans? But the more important question is actually: At what point are they harmful to the bees?” And this question inevitably leads to quite different limit values. “Bees react very sensitively to environmental changes. Climate change and pesticides from industrial agriculture stress them enormously and make them susceptible to diseases or parasites like the Varroa mite.” These factors are one of the reasons for the current bee mortality. For Marcel, therefore, only organic animal husbandry was an option. He wants his bees to do well.

He observes them carefully and listens to them. For him, it is a kind of symbiosis into which he enters as a beekeeper with his animals. His colonies are also allowed to decide for themselves when it is time for a new queen. “Many beekeepers exchange the queen after two years. I just wait and trust that the bees themselves know best when it’s time.” He gently takes a bee that is crawling along the collar of his T-shirt between his fingers and lets it fly again. He gets stung almost every day. But he shrugs his shoulders—it doesn’t bother him anymore.

The Willared family choose their sites carefully. Like here, on the edge of a forest near Hardheim. Forteen bee colonies live under the protection of the trees. Sunlight dances on the forest floor. The pollen baskets on the bees’ hind legs, in which they transport the pollen, are bright yellow. Next to the forest is a rapeseed field, organic rapeseed of course. Soon the plants will have withered. Then, the forest will start to “honey” Marcel explains. Insects like aphids produce a sticky, sweet liquid called honeydew, which is collected by the bees. This then becomes the dark, spicy forest honey. The smooth transition from one food supply source to the next allows the bees to stay in one place. “We rarely travel with our bees. And when we do, it’s only a few kilometres.” For example, to the next fennel field, which an organic farmer friend cultivated especially for him in 2020. The fennel blossom honey that resulted has since won awards.

“The apiary produces between 10 and 15 types of honey a year. In addition, they offer beeswax candles, honey wine and specialities such as honey-onion jam. All marketed by themselves, their products are available in organic shops in the region—and in the Honiglädchen shop located only a few metres from the former forester’s house where the Willared family lives, secluded in the forest, only a few metres from the border to Bavaria. Besides the family, dogs and cats live here—and wild boars. “The three darlings,” as Dieter calls them. The first wild boar, Hilde, strayed into their home one day. They raised and bottle-fed it as well as litter-trained it. Later, Hilde was joined by Rambo and Bärbel.

The Honiglädchen shop, a former stable, smells of wood and wax. Plastic is not used here—even the homemade tea candles have a wooden wick holder. “The holder also burns down slowly at the end. Nothing but the glass is left,” Marcel explains. Dieter is proud of what his son has built up over the past years. “He constantly has new ideas and is so motivated. I’m sure he wouldn’t be if I were the boss here,” he laughs. They are learning from the bees: “They know exactly when it’s time to pass it on to the next generation.” 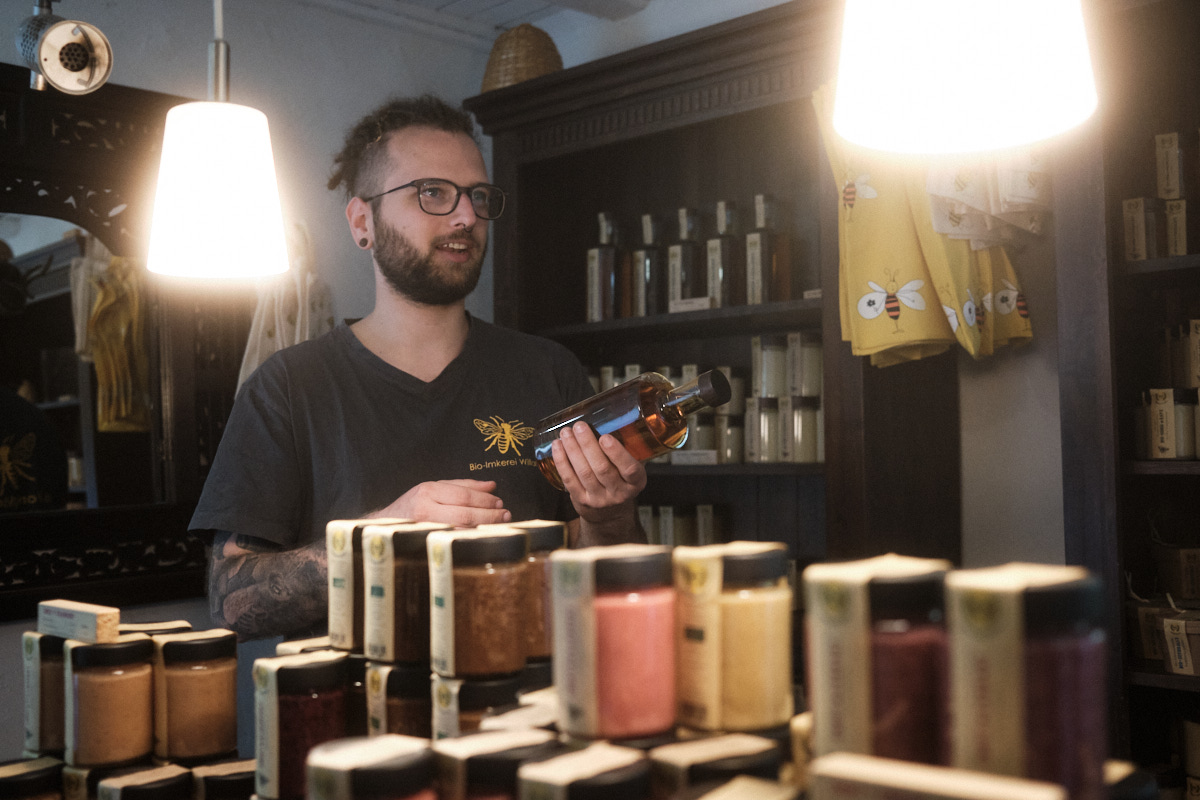 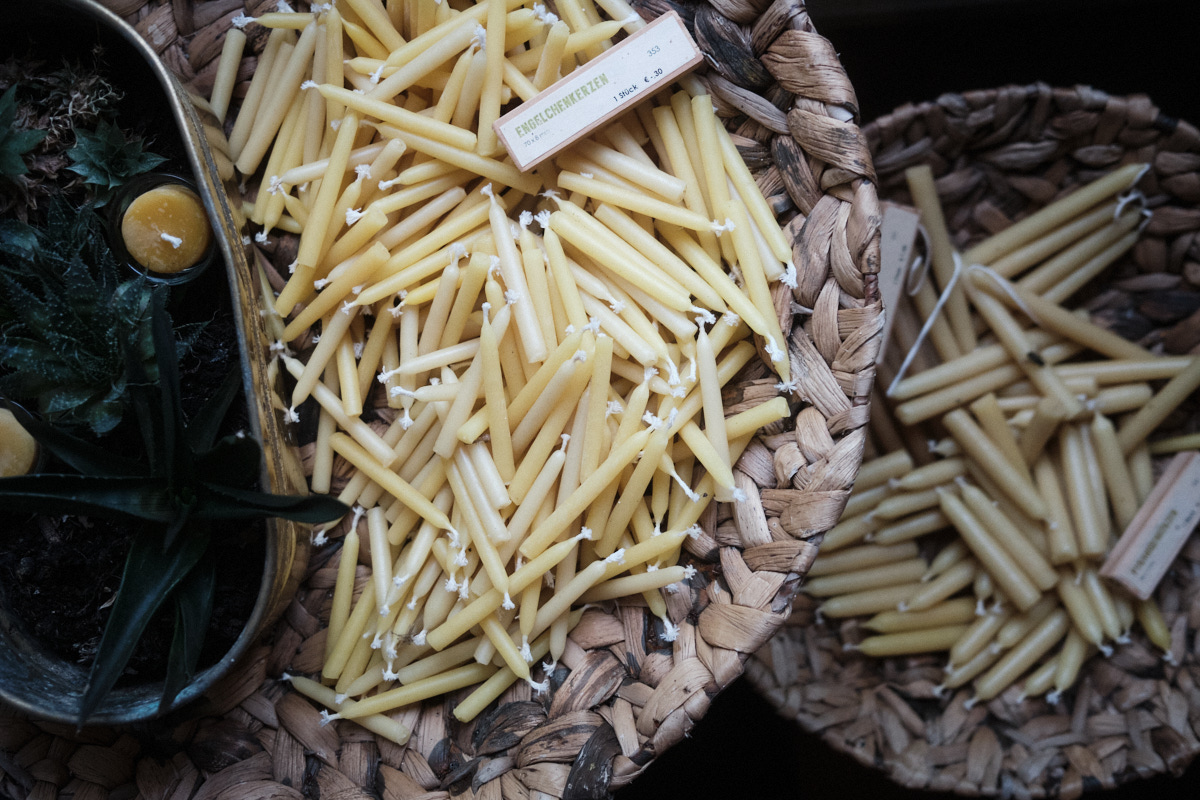 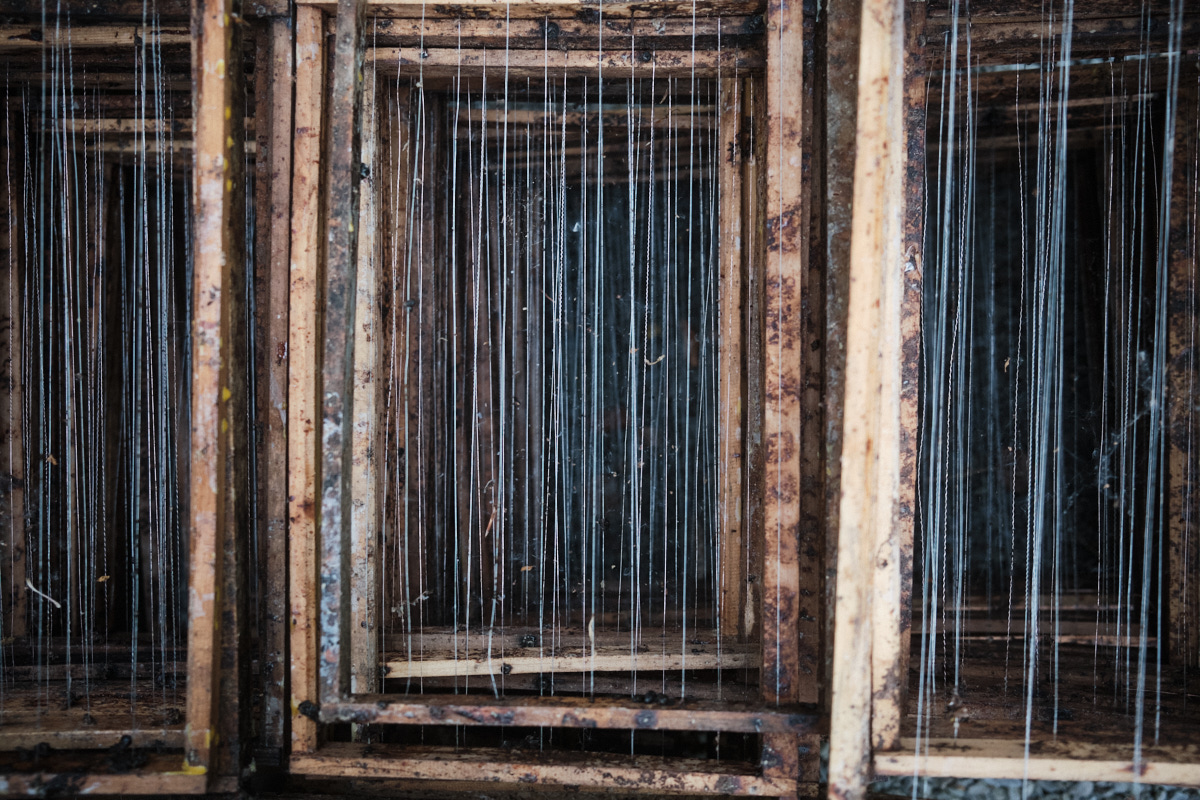 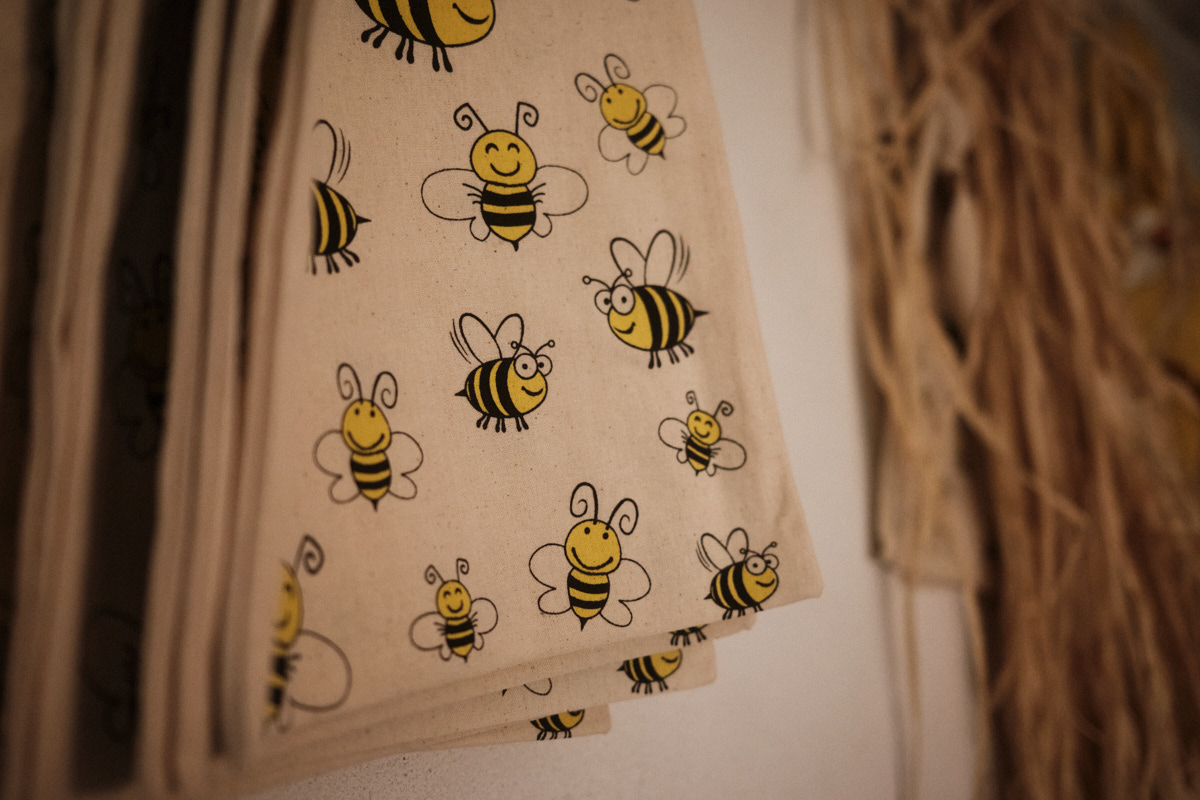 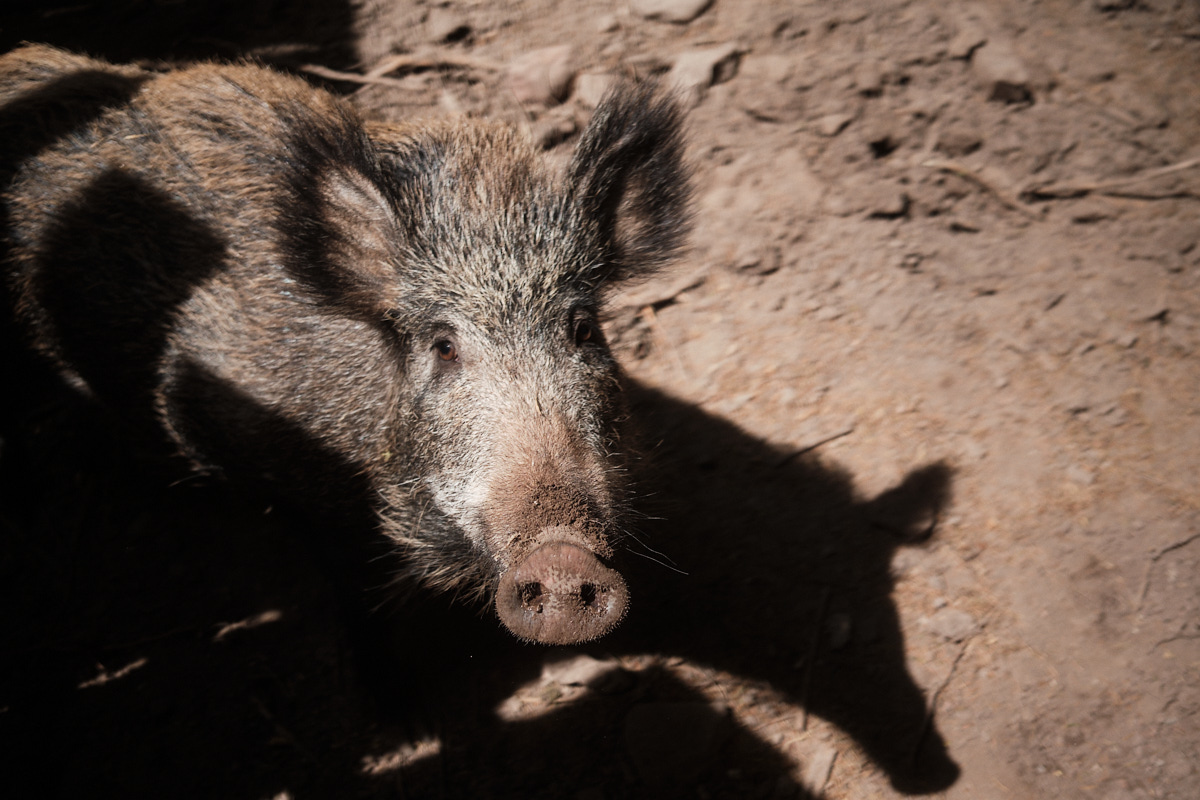 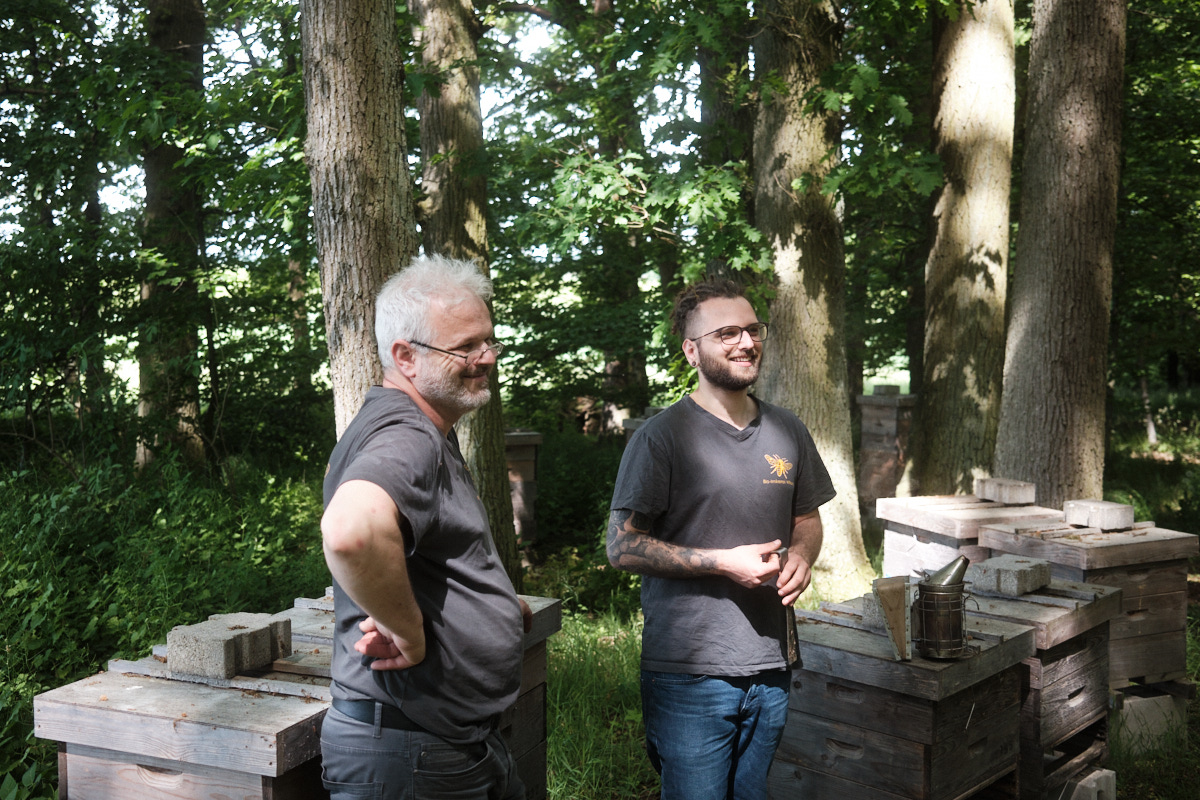 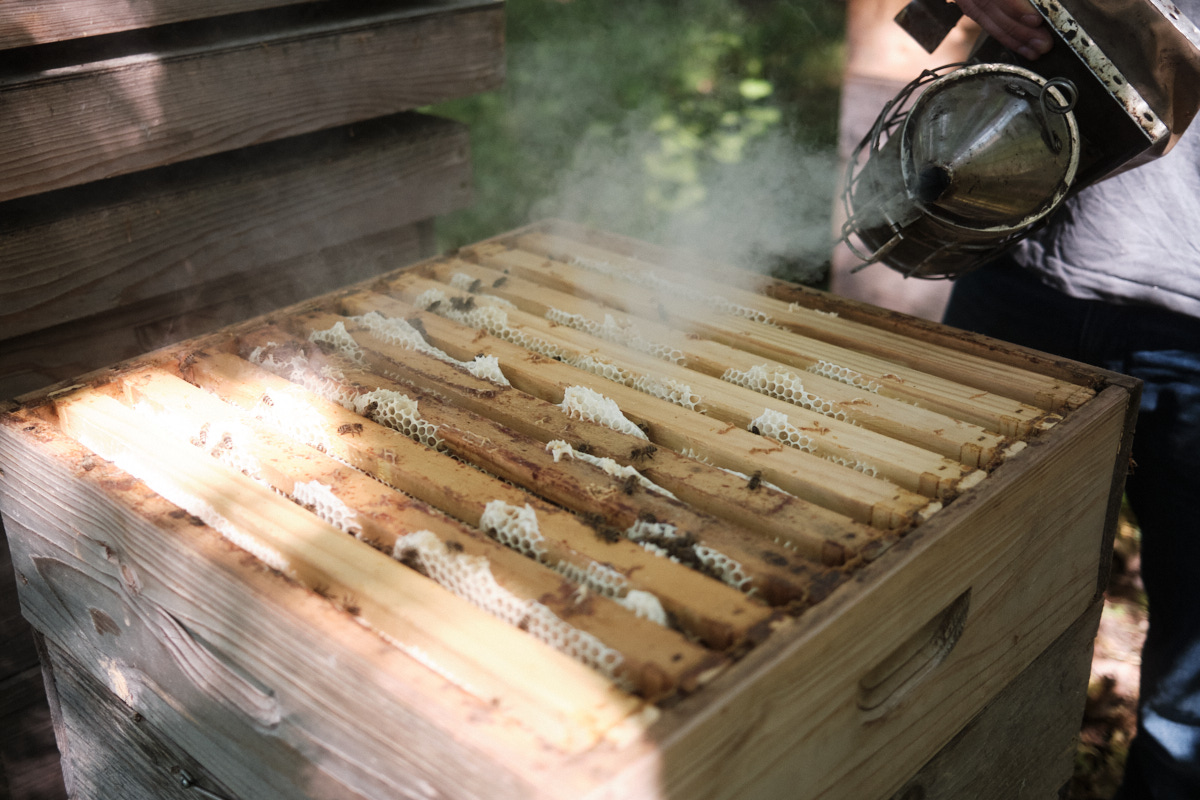 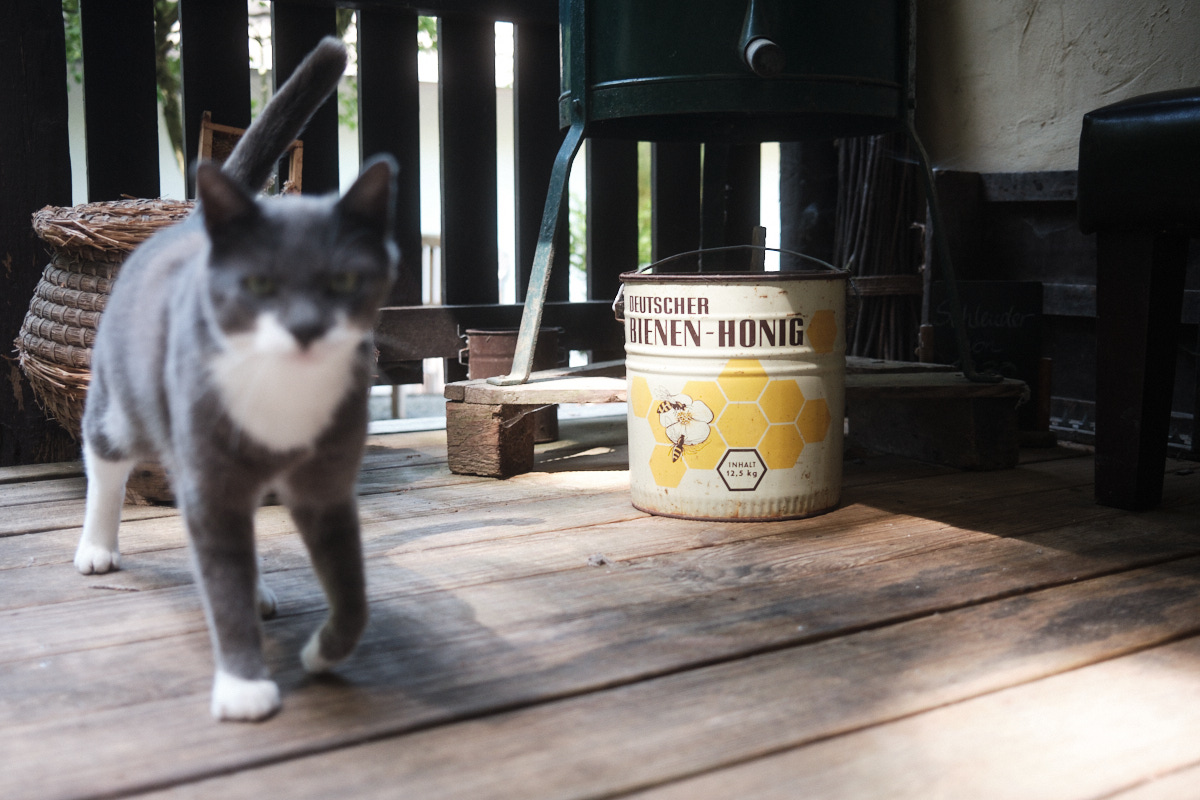