Where the wild dragons are

Fantastic location, breathtaking view, historic walls, a unique museum – and way too little time: a visit to Klaus Johe, the tourist manager of Lindenfels in the Odenwald.

If it had rolled and not slid this could have had disastrous consequences for the small town in the Odenwald back then: this enormous rock which they today call the “Drachenfels” (Dragon Rock) here in Lindenfels. Years ago, it broke away from the mountain, burst through the castle ruin’s wall – and came to a halt not far from the first houses. This was indeed dangerous – but luckily enough, it all ended well.

Further along the route: passing by the medical plants garden which used to save lives in the past and is still lovingly taken care of today. Towards the dark dungeon, the so-called “Eisengrün-Turm”. This tower is named after its last prisoner who is said to have attacked the prince-elector while he was hunting. Klaus Johe, too, listens attentively to visitor guide Ilse Bonn talking about these places and their stories.

Volunteers like the 77-year-old tour guide are a blessing for Johe. He is the director of the spa and tourist services in Lindenfels and manages, to be precise, himself. Lindenfels belongs to those municipalities receiving financial aid by the state of Hesse, since their coffers are empty. The town comprising 5,100 inhabitants has to economize – in the tourism sector, too. While some years back Johe was supported by a colleague working part-time, he now has to cope by himself. This is why he now sometimes feels “like a jack of all trades” who is constantly short of time. “Time for something creative.”

The man from Beerfelden is responsible for the spa town with its therapeutic climate. Its houses are situated at an altitude of 340 to 550 meters built on the terraces at the south-western slope of the Odenwald – a spectacular location with a terrific view overlooking the Rhine valley and the Odenwald. “Lindenfels has a mythical landscape,” Klaus Johe says enthusiastically meaning this quite literally, since the “Nibelungensteig” hiking trail goes directly past his office window – this long-distance trail crossing the Odenwald all the way from the Bergstraße district in the west to the river Main. Surrounded by sights, paved with stories. Hikers can take a rest at wells where Hagen von Tronje is said to have murdered Siegfried.

Lindenfels was first mentioned in records in 1123. Conrad of Hohenstaufen, Count Palatine of the Rhine and half-brother of Emperor Frederick Barbarossa, is said to have built the castle – the starting point of the politics in the Electoral Palatinate region. Over the centuries the castle was expanded: the city wall was built, the castle turned into a fortress. Several times hostile troops occupied the castle, yet did not destroy it. In fact, three local gentlemen were responsible for that.

The representatives of the higher authorities arranged for the castle to be sold for demolition in 1779. This is why stones from the castle still support old buildings in the town of Lindenfels today. 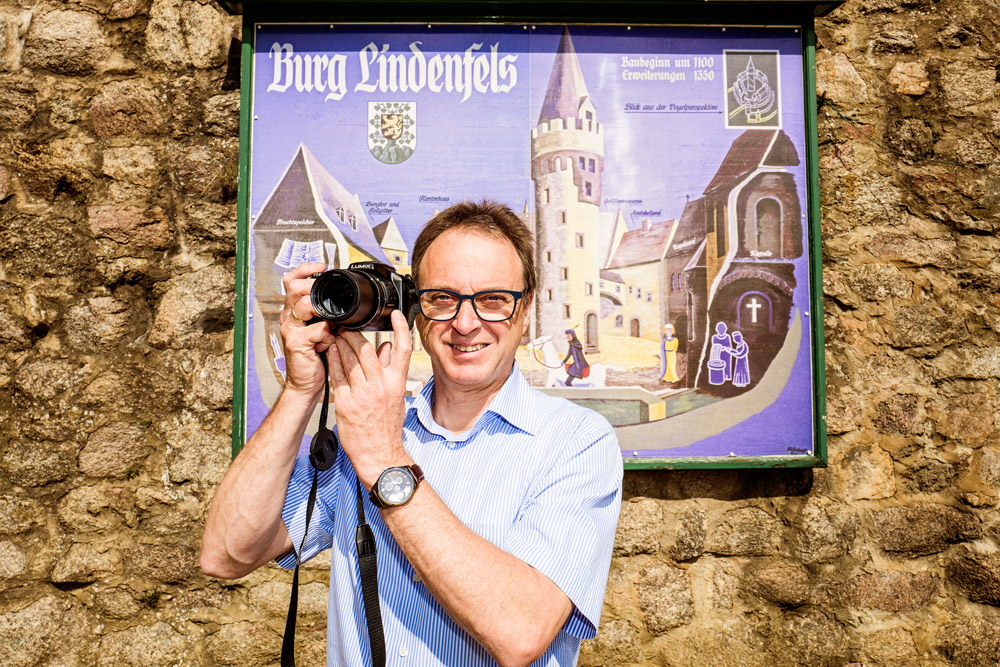 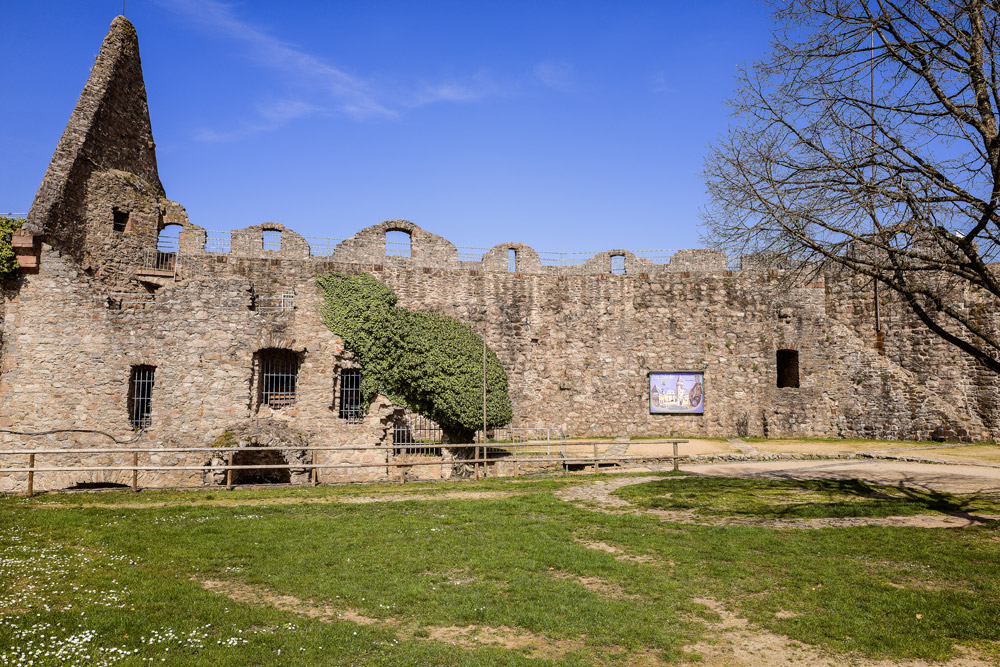 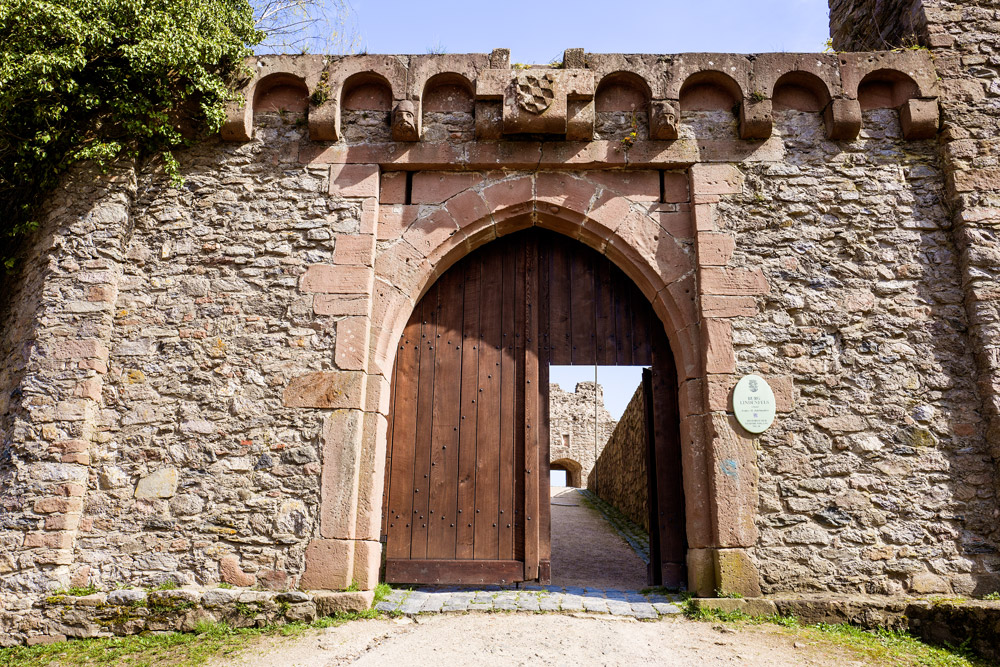 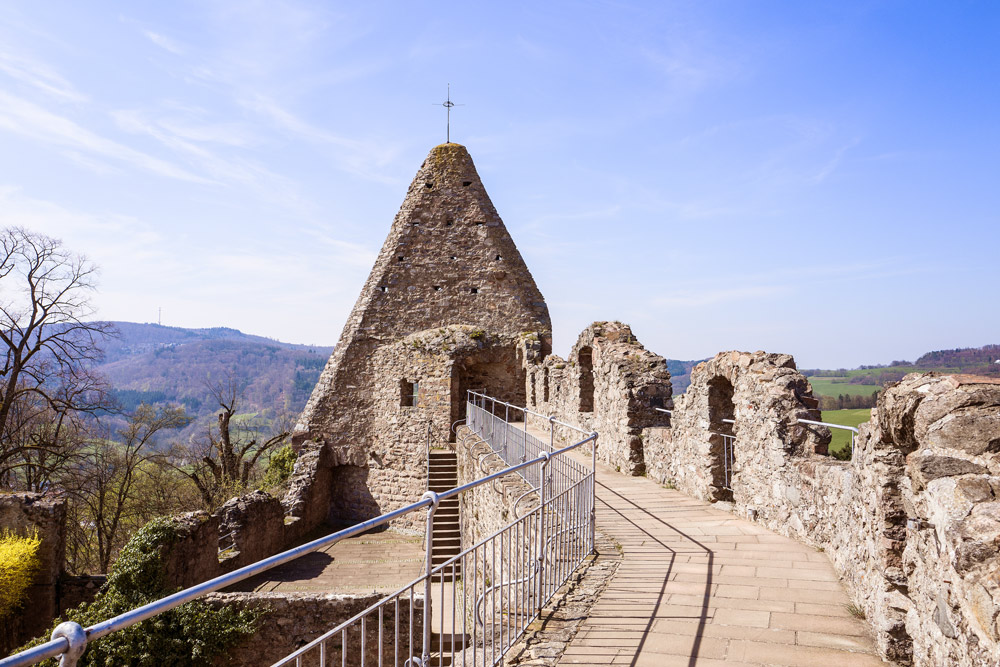 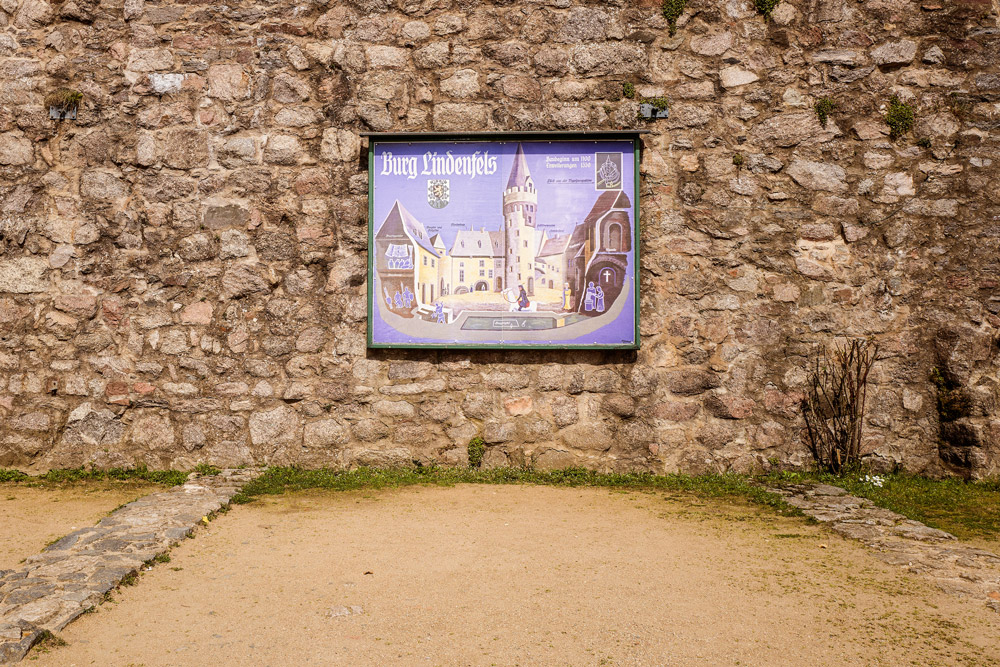 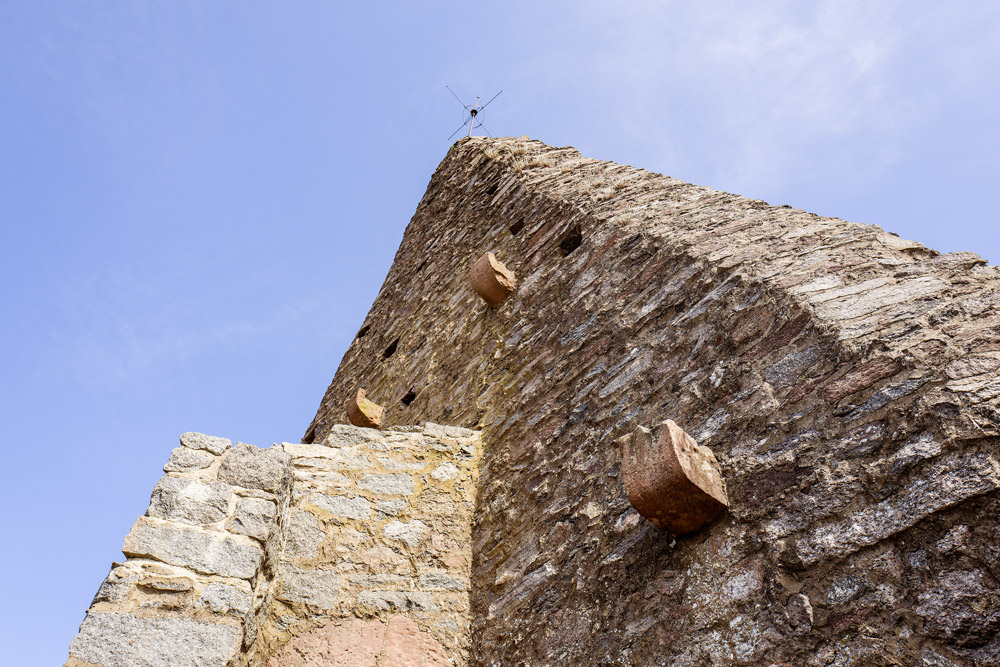 Ilse Bonn points to the bretèche above the gate to the ruined castle. From here the inhabitants could pour out hot water or oil over the enemy. Walking through the gate you can find lines of stone on the ground. They indicate where walls once stood – buildings, or the castle keep in the yard. When Ilse Bonn makes history come to live, the woman from Lindenfels cannot conceal her professional past. The pensioned teacher wears her hair tied back; and very modern, big glasses with a red shimmer decoratively highlight her face. When she shows a group of visitors through the castle ruins she is clad in a historical costume, for instance a cowl with wide sleeves, a coif, a necklace made of clay.

Watch out for Ilse Bonn – who takes us back to middle ages.

With her stories in mind you do not need a whole lot of fantasy to be transferred into the lively castle yard where knights once polished their harnesses, the smith shoed the hooves of impressive warhorses and elegant ladies danced around the old lime-tree. In this historic setting a medieval festival takes place every two years. In the beginning of August, the “Burg- und Trachtenfest” (castle and traditional costumes festival) is on the agenda, and in the end of August an open air cinema is brought into the castle ruins, sponsored by the Sparkassenstiftung Starkenburg (the foundation of the Sparkasse in Starkenburg), organised by the film journalist Michael Spiegel from Mannheim, who with his “Kino unterwegs” (cinema on the move) shows films at unusual places.

Going all the way up the stairs you can enjoy an extraordinarily far and wonderful view over the valley of the Weschnitz. In Lindenfels, according to Ilse Bonn and Klaus Johe, people have a long stick “to push away the clouds”. If this for some reason should not work, there is always the “Drachenmuseum” (Dragon Museum) you can go to just a few minutes walk downhill. Having been linked to the tourist route called “Siegfried” in reminiscence of the mythological hero, these mythical creatures have become the emblem of the town. You can encounter many of them at numerous places all over the town. The impression the polystyrene specimens make is not that of especially monstrous or scary creatures, but rather of tame and friendly beings – perhaps because of the bright colours the Lindenfels people painted them with.

“Many years ago,” Peter C. Woitge was their mayor. Now he is chairman of the association “Das Deutsche Drachenmuseum” (The German Dragon Museum). He established the exhibition with 700 objects on display and puts his heart into its management. This museum is the only one of its kind in Germany, maybe even in Europe. On 150 square-meters you can see town coat of arms, artful tea sets, figures – and all kinds of unusual things. There is the huge cast of the skull of a Tyrannosaurus Rex from Canada, there are wood seals from Mesopotamia which are thousands of years old. Upstairs children may play in the cozy dragon cave or – if they dare – open the curtain opposite, behind which a dangerous dragon is living. “In Asia, the dragon is considered the guardian of the family and the house,” Woitge explains. There is, by the way, beside him a secret boss in the “Drachenmuseum” – Harry. Someone else Klaus Johe can count on when he is on his touristic mission, since the lizard could soon become the star of international film festivals: In the production of the art and culture project “Matchbox” about the Nibelungen saga the actually very peacefully looking bearded dragon plays the role of the terrifying dragon who kills Siegfried.

An architect equipped with a saw and a scalpel