One of the last church ships in Germany is moored in Mannheim’s Mühlauhafen harbour. Ship pastor Anne Ressel takes the Wichern out on the waterwaystwice a week to visit people who are all too often forgotten by the community. We accompanied her on a very special trip.

There is a flurry of activity on the Wichern shortly before its departure. The crew pack away equipment, load instruments and put on life jackets. Keys pass from one hand to another. Someone has forgotten something on shore and has to disembark again for a moment. Eventually, everyone is on board and Albert Schenkel starts the ship. The old diesel engine jerks and chugs. Garage walls amplify the engine noise. The 13-tonne ship ponderously picks up speed. The busy and noisy atmosphere on the ship changes abruptly as the Wichern glides out of the hangar. The wind and the water swallow up the engine noises. Everyone aboard moves a little slower, more deliberately. Many passengers including pastor Anne Ressel go out on deck despite the icy wind. They turn their face towards the wind and look out over the water for a few minutes to calm down and take a deep breath.

Anne is a pastor in the CityGemeinde Hafen-Konkordien congregation and is often out and about in Mannheim city centre and in the Jungbusch district. “There’s nothing better than going out on the Wichern after a busy and hectic day in the city,” she says. Whenever Anne meets people who have had a bad day or who are stressed by everyday life, she likes to invite them to join her spontaneously, “because I know that water calms the soul.” Her friend Nadja Peter stands next to her and nods. She has experienced it herself. “There was a day when I wasn’t feeling well at all and Anne just said: ‘Come aboard.’” Now, a good six months later, she takes over the helm from Albert and steers the Wichern out onto the Rhine. She took her booting license course for inland navigation shortly after her first trip. Since then she has volunteered on board of the Wichern regularly. “It’s extremely fun,” she says. Next to her, three men nod simultaneously. They also take the helm as volunteers regularly.

Anne is talented in bringing people together and inspiring them for a cause. You notice this after just a few minutes on board. The maritime ministry in Mannheim, which is also responsible for Ludwigshafen, would probably no longer exist without the many volunteers—25 in total. In many other places this type of service has ceased to exist. Only Duisburg still has a church ship. The river-going church ship in Hamburg has been firmly anchored in the harbour for years. But Anne is keen that the Wichern continues to be there for people working on inland waters. 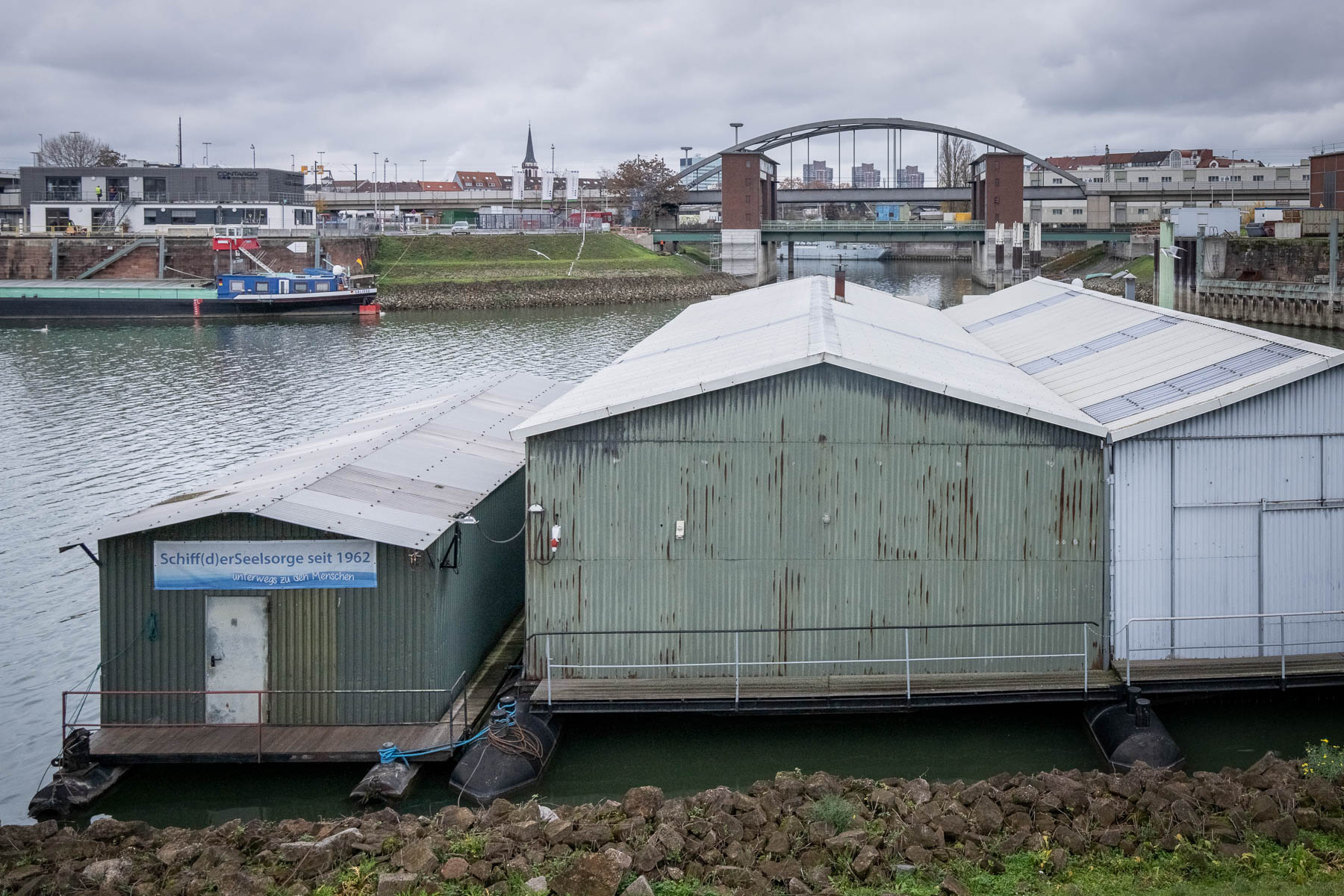 One of the last church ships in Germany is moored in Mannheim’s Mühlauhafen harbour. 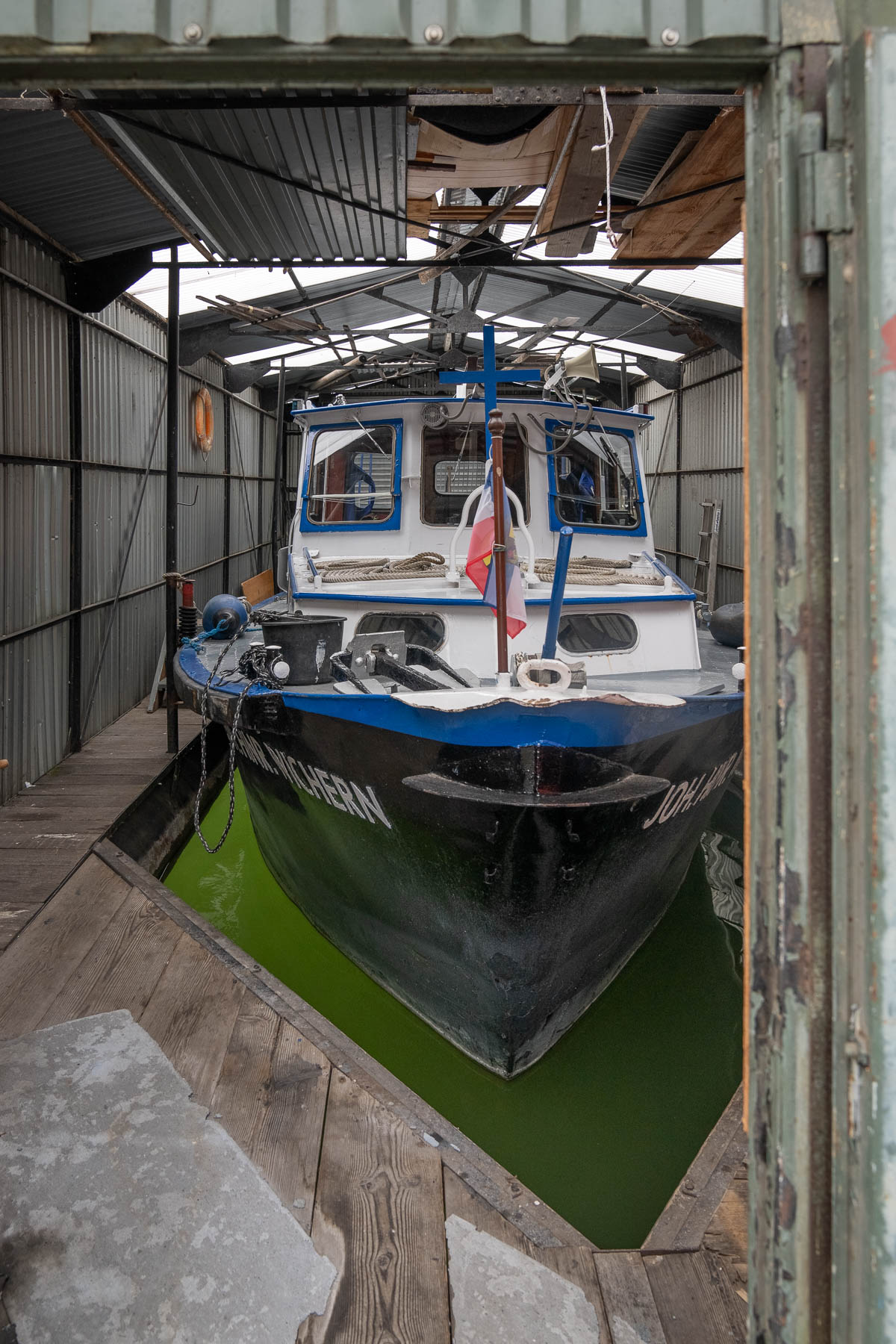 The Wichern has been sailing on the Rhine and Neckar since 1962. 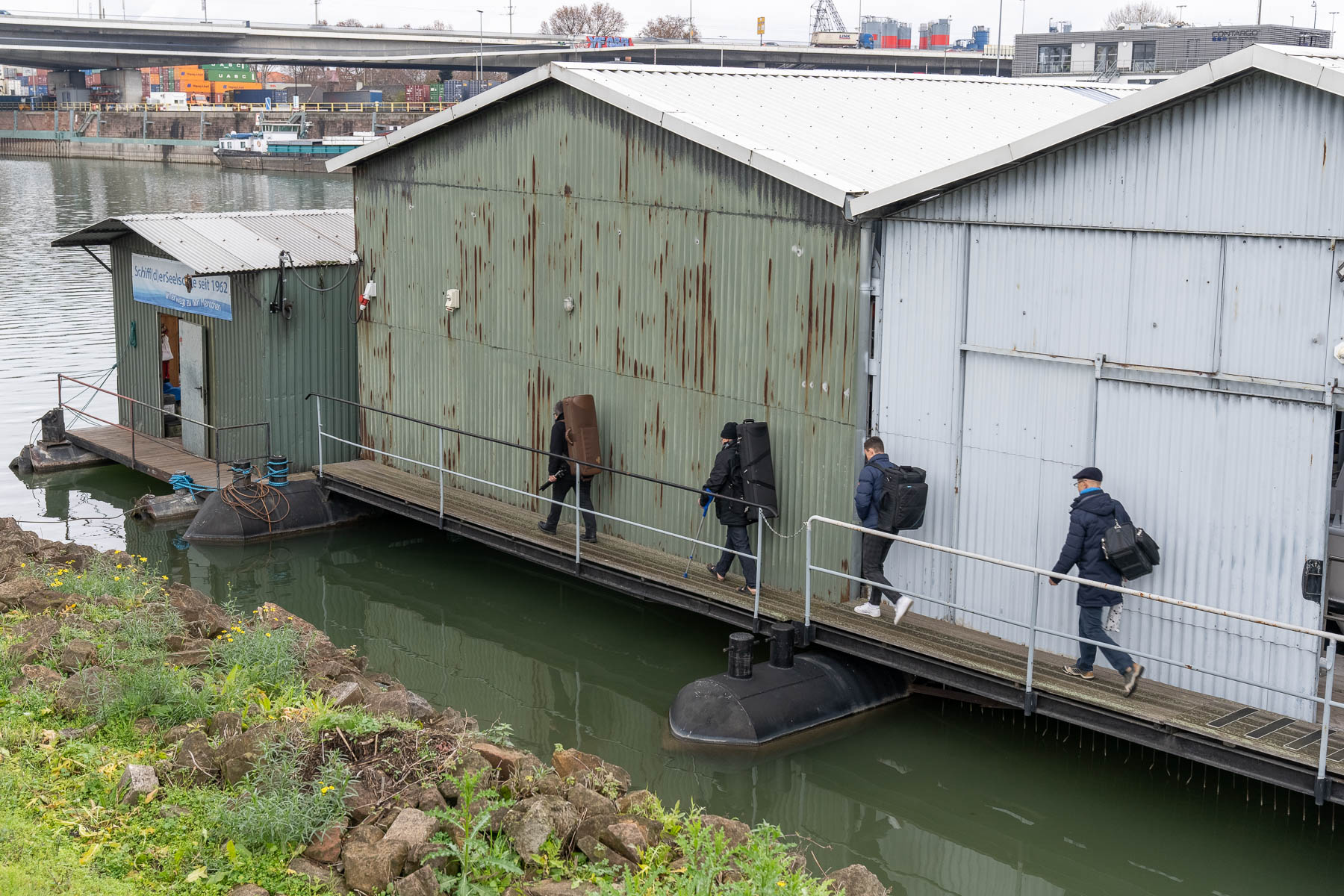 On Saint Nicholas’ Day a group of four brass and woodwind players are on board of the Wichern. 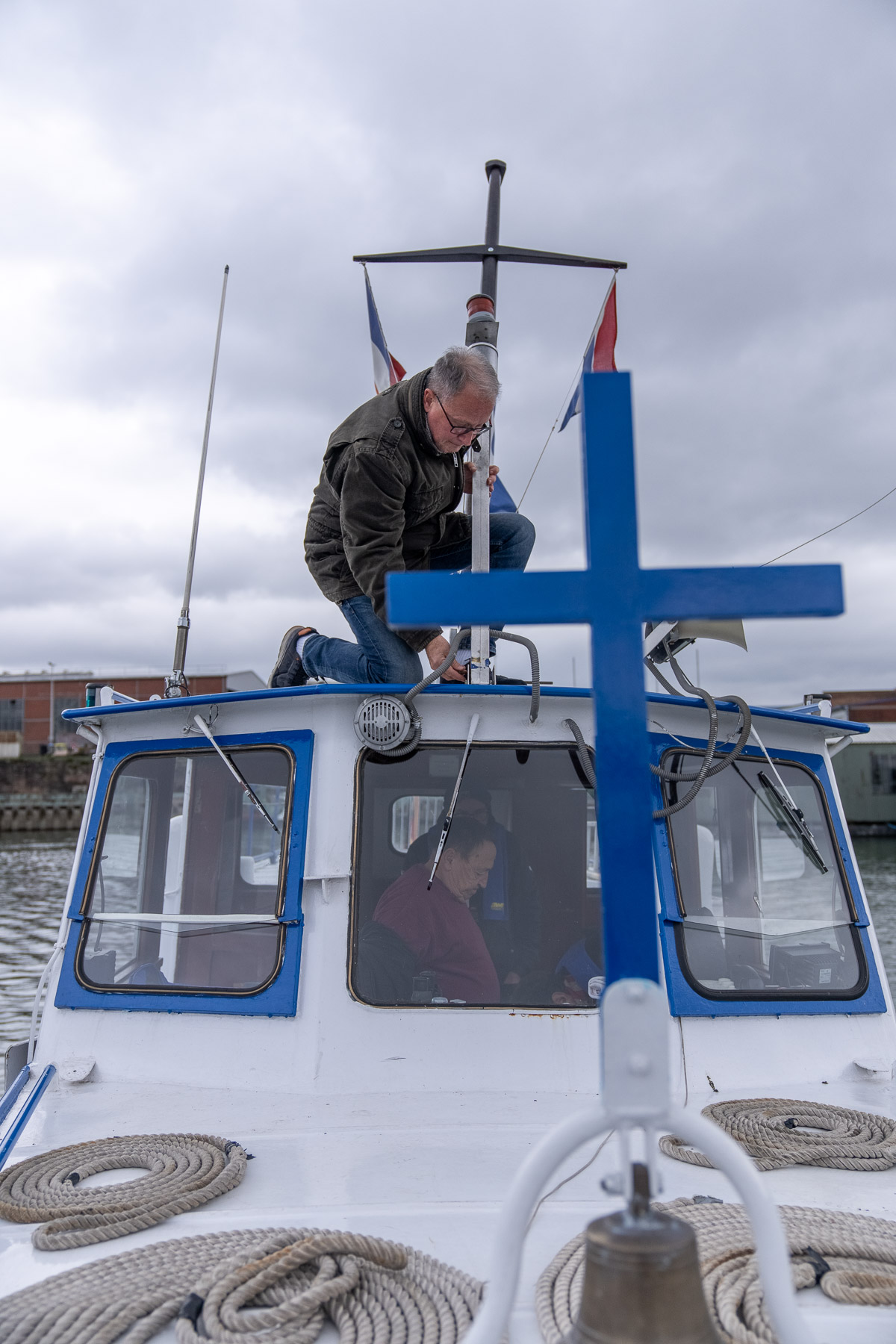 The maritime ministry would probably no longer exist without the many volunteers. 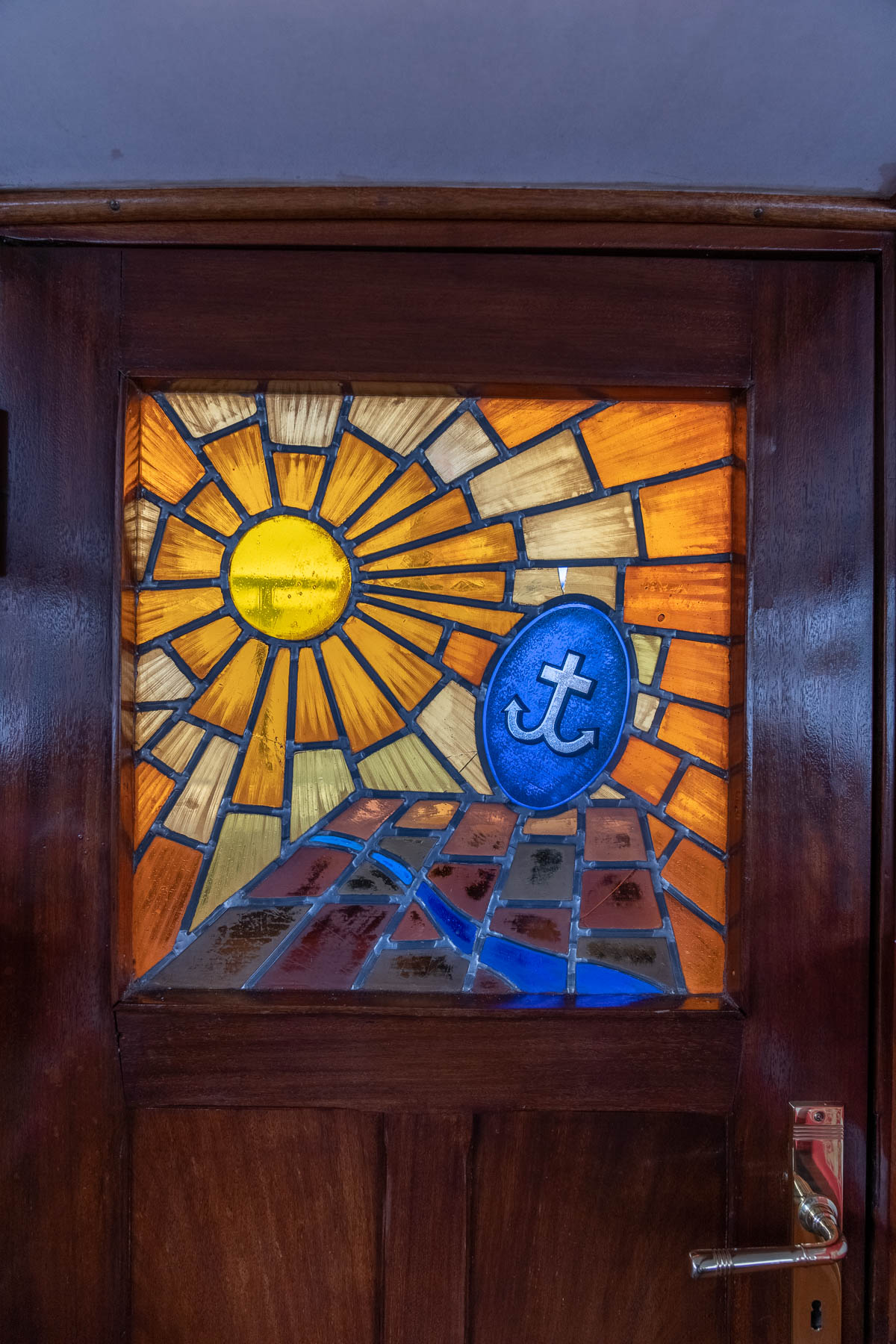 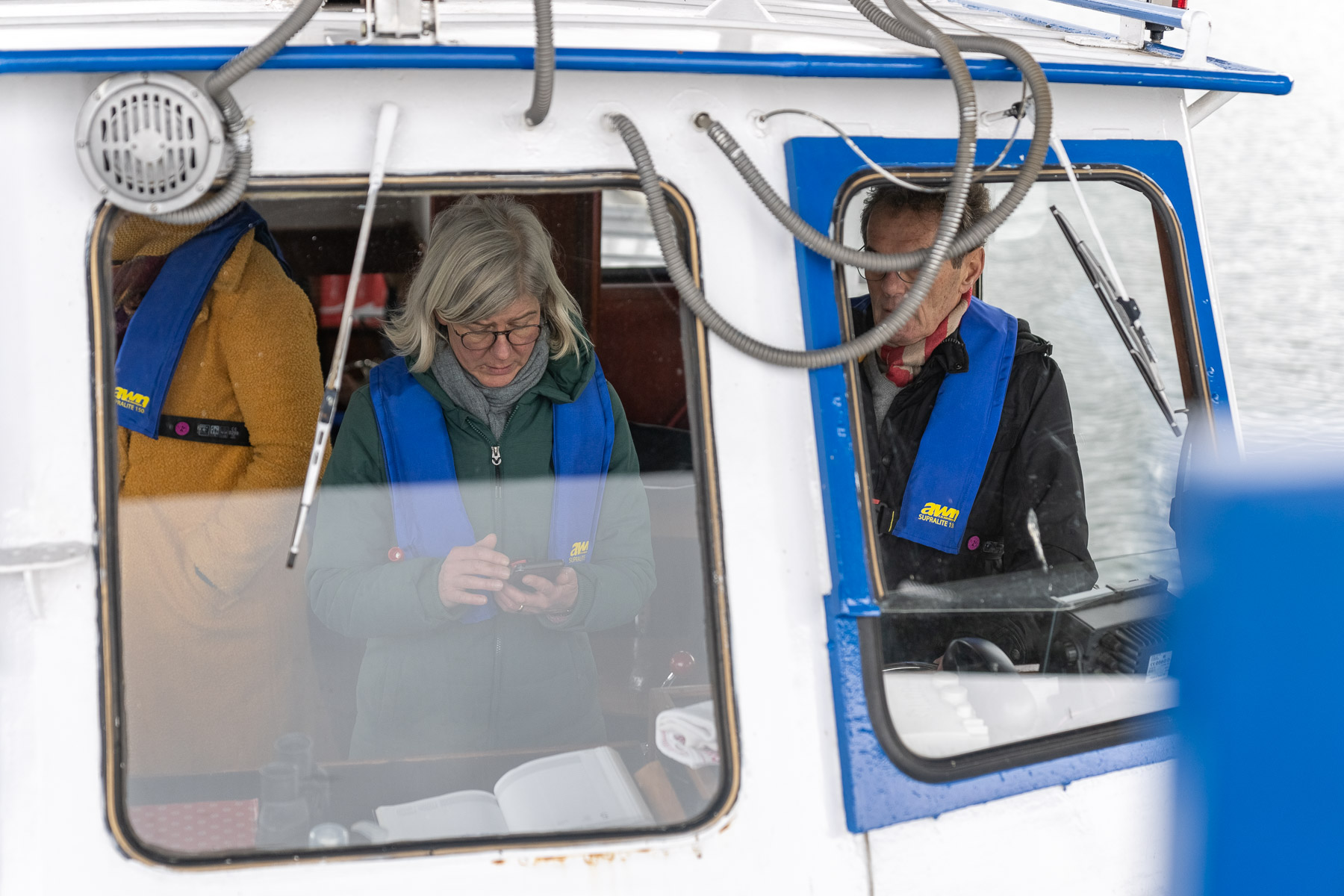 Twice a week, the Wichern navigates the waters to the ships... 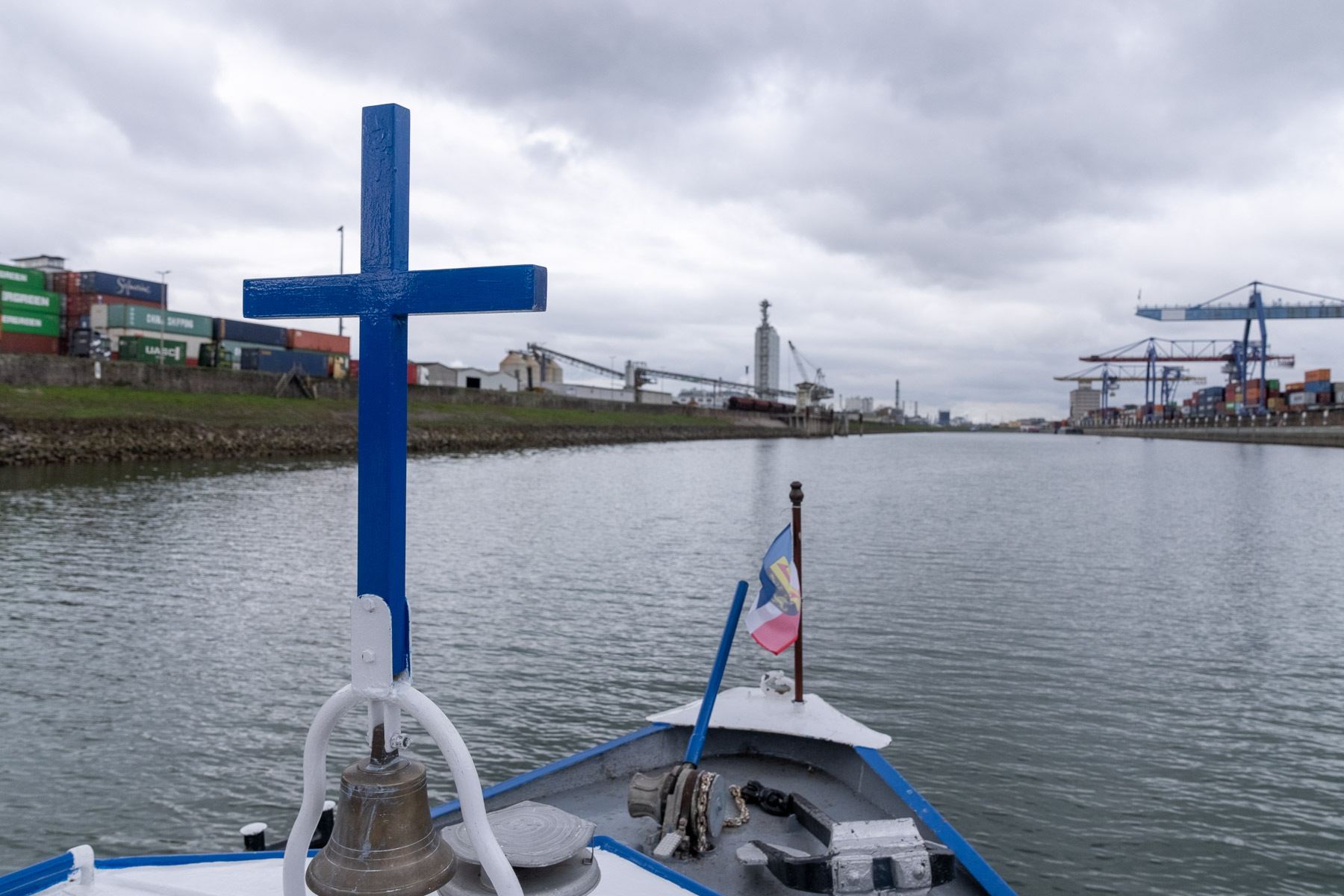 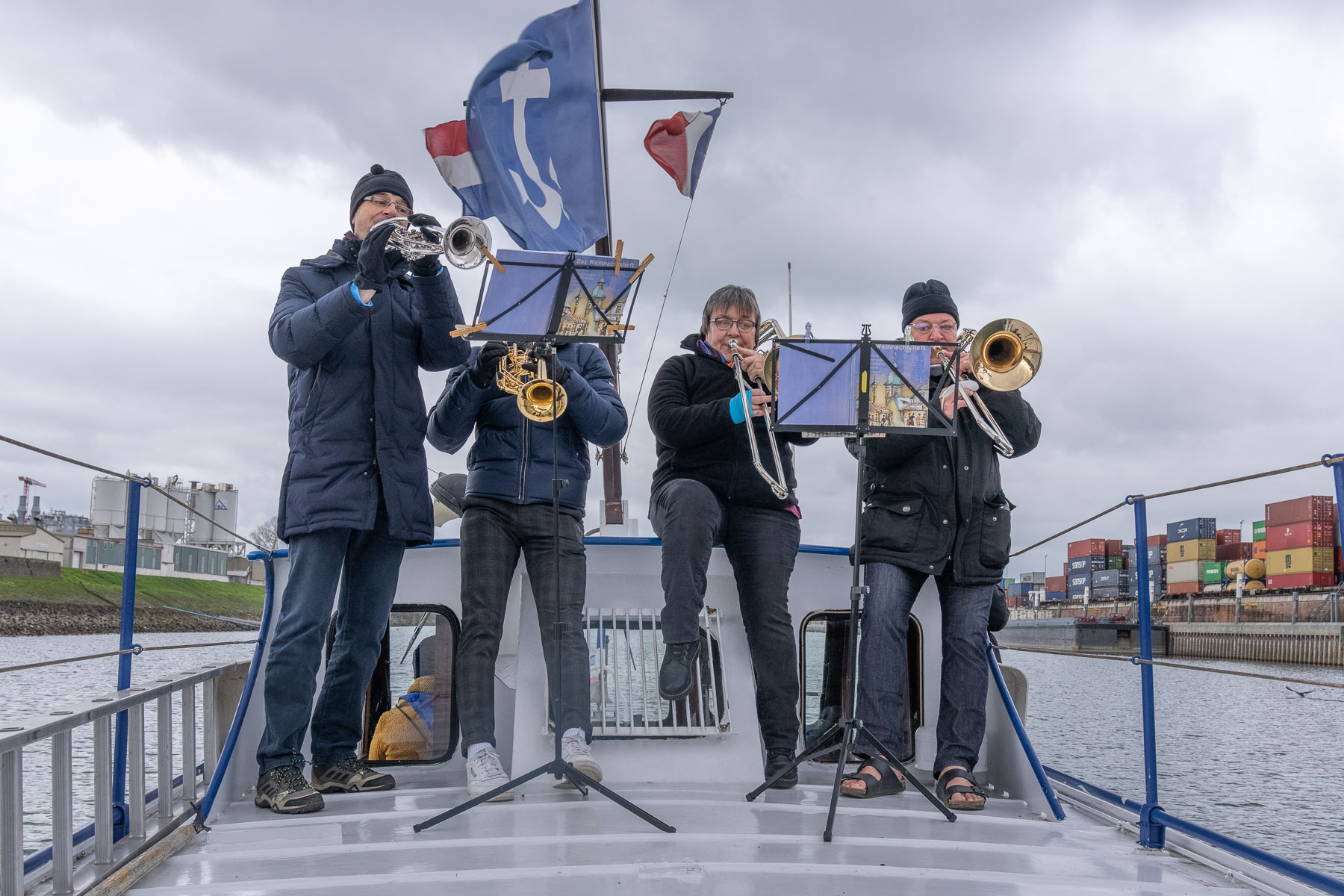 this time accompanied by christmas carols.

It is 6 December, Saint Nicholas’ Day, a special day for several reasons. Saint Nicholas is the patron saint of sailors. Therefore, a group of four brass and woodwind players are on board of the Wichern today. They stand on deck in the icy cold and play Christmas carols against the headwind. Anne joins in again and again and sings along loudly as she dashes confidently back and forth on the moving boat. The Wichern is now heading downstream with a bearing towards Neckarspitze, the mouth of the Neckar, passing factories and rows and rows of containers as tall as houses. The volunteers have packed small bags with peanuts, chocolates and information about the Wichern—a little Saint Nicholas gift for the bargees. As the crew moors at the tanker, which is the ship’s first port of call, the crew there await them with Saint Nicholas chocolates, too. They exchange gifts and greetings and the mood is cheerful. Then the journey continues.

The church ship has been sailing on the Rhine and Neckar since 1962. Like all ships of the Protestant Church, it is named after Johann Hinrich Wichern, founder of the Inner Mission and initiator of the ship pastoral care. Wichern is also considered the inventor of the Advent wreath. “Wichern always focused on people who lived on the margins of society; and especially on those on the move, because they are away from home for a long time and often lack support during this time,” Anne explains. This is how the maritime ministry came into being.

Anne admires Wichern’s work. She has a very similar understanding of the church—of social welfare work. “I have always wanted to work with people who are out of sight, grazing on the edge of the pasture instead of right in the middle of a lush pasture.” Born in Karlsruhe, she came to Mannheim in 1999—to the Christuskirche congregation at first. But she changed immediately when a position in Neckarstadt-West became vacant. “I consider it my task to mediate between faith and the world. And in a district like this, you need other stories and other ways to reach people. A different language, too. I find that incredibly exciting—and enriching.”

When pastor Peter Annweiler left the post of ship pastor, Anne took over the half-time position in Germany’s second largest inland port without hesitation. “I think very few people in Mannheim are aware of how big this port is; of how many people who are busy every day working to secure our supply, but who hardly get any credit.” Twice a week, the Wichern navigates the waters to the ships docked in the widely ramified Mannheim harbour. Anne announces her visit with a tinkling bell and then waits for a reaction. When the Wichern receives a friendly wave in response, the ship moors alongside the other ship. At a wave-off it continues on its way. “That’s no problem. People have a lot to do. The main thing is that they know we are there and they can turn to us at any time if they have a need.”

At the next ship, the greeting is rather sceptical. As it turns out, the man on board of it hardly speaks German. But he does understand “Santa Claus” and his face brightens the very moment he hears these words. He nods gratefully to Anne with a smile as he takes the bags from her. The encounters on the water are usually brief, from railing to railing. However, they can make a real difference. “Before the coronavirus pandemic, I was often invited onto a ship, but that’s hardly ever the case now.”

Anne plans to continue travelling with the church ship on the Rhine and Neckar for many years to come. She wants to bring the church to people and to be there for them. At the same time, she wants to anchor the Wichern, so to speak, more in Mannheim’s city-dwelling society. The cabin of the ship can also be used as a religious space to host weddings and baptismal ceremonies. “Life’s transitions, such as retirement, can also be celebrated here on board,” Anne says. She thinks it’s just a good fit. “After all, in life everything flows.” Guests who simply want to come along for a ride are also very welcome. No matter whether they have had a good day or a bad day.

If you want to go aboard the Wichern for a ride or if you are planning to have a wedding or baptismal ceremony on board, simply contact Anne Ressel by email at anne.ressel@kbz.ekiba.de. 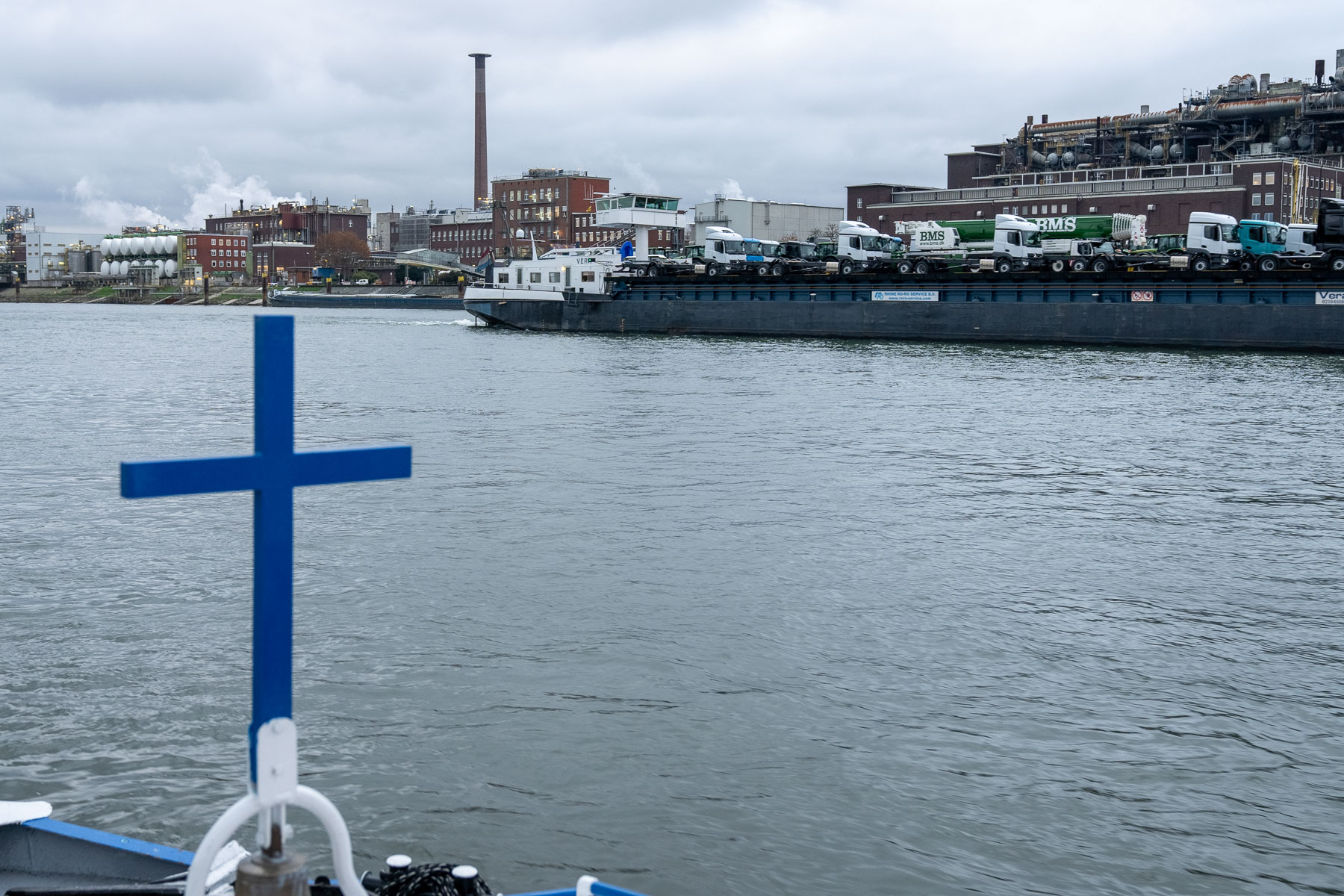 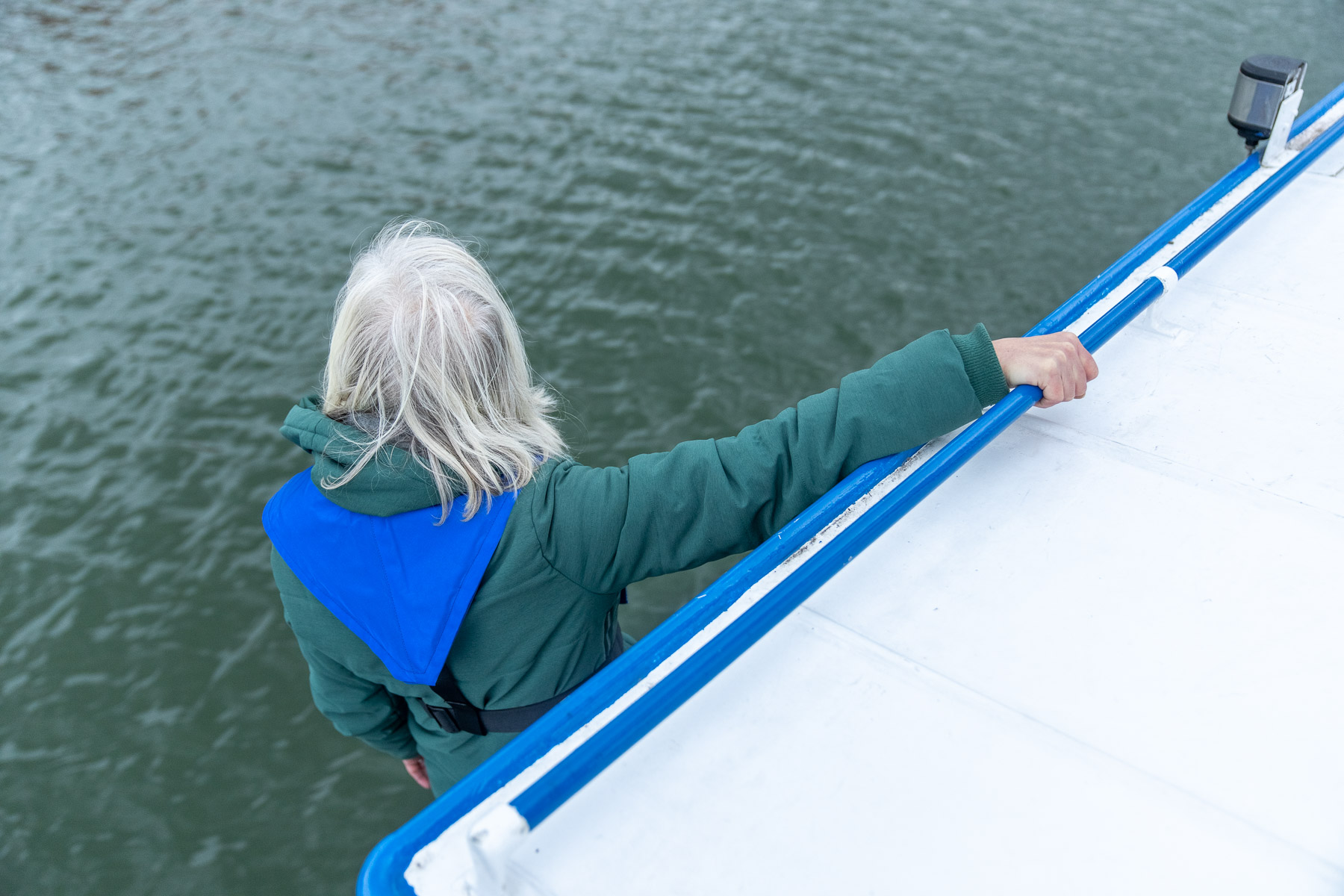 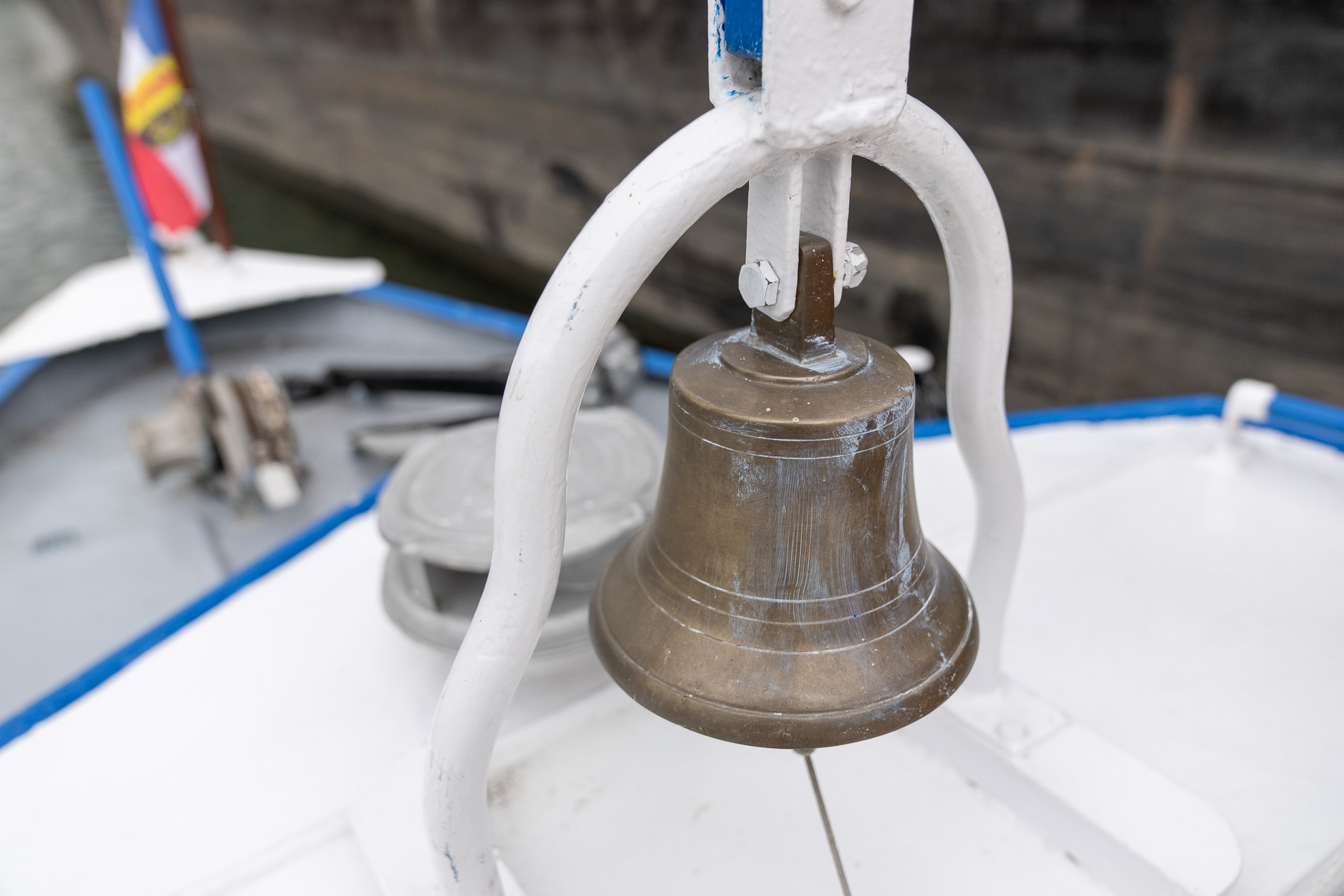 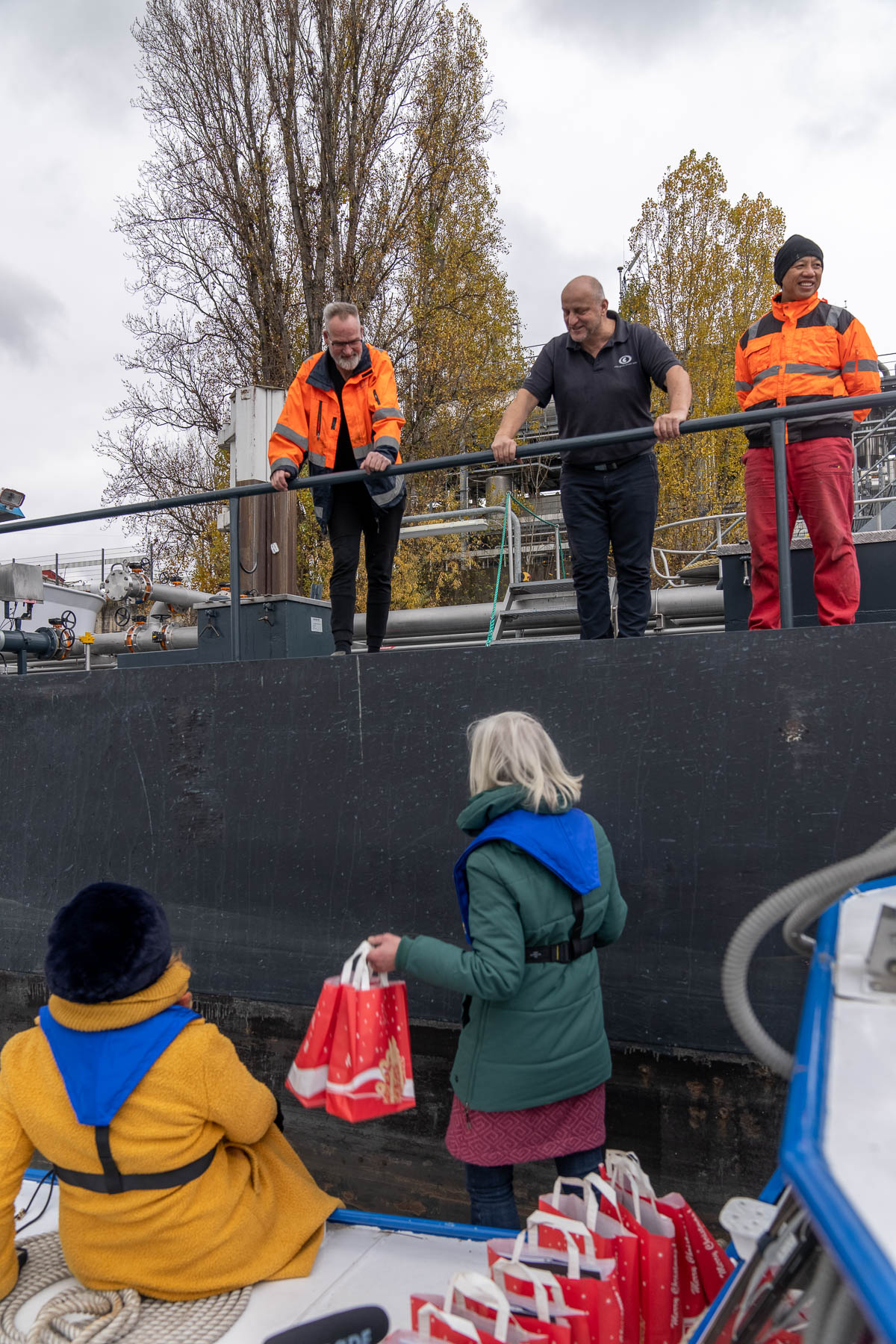 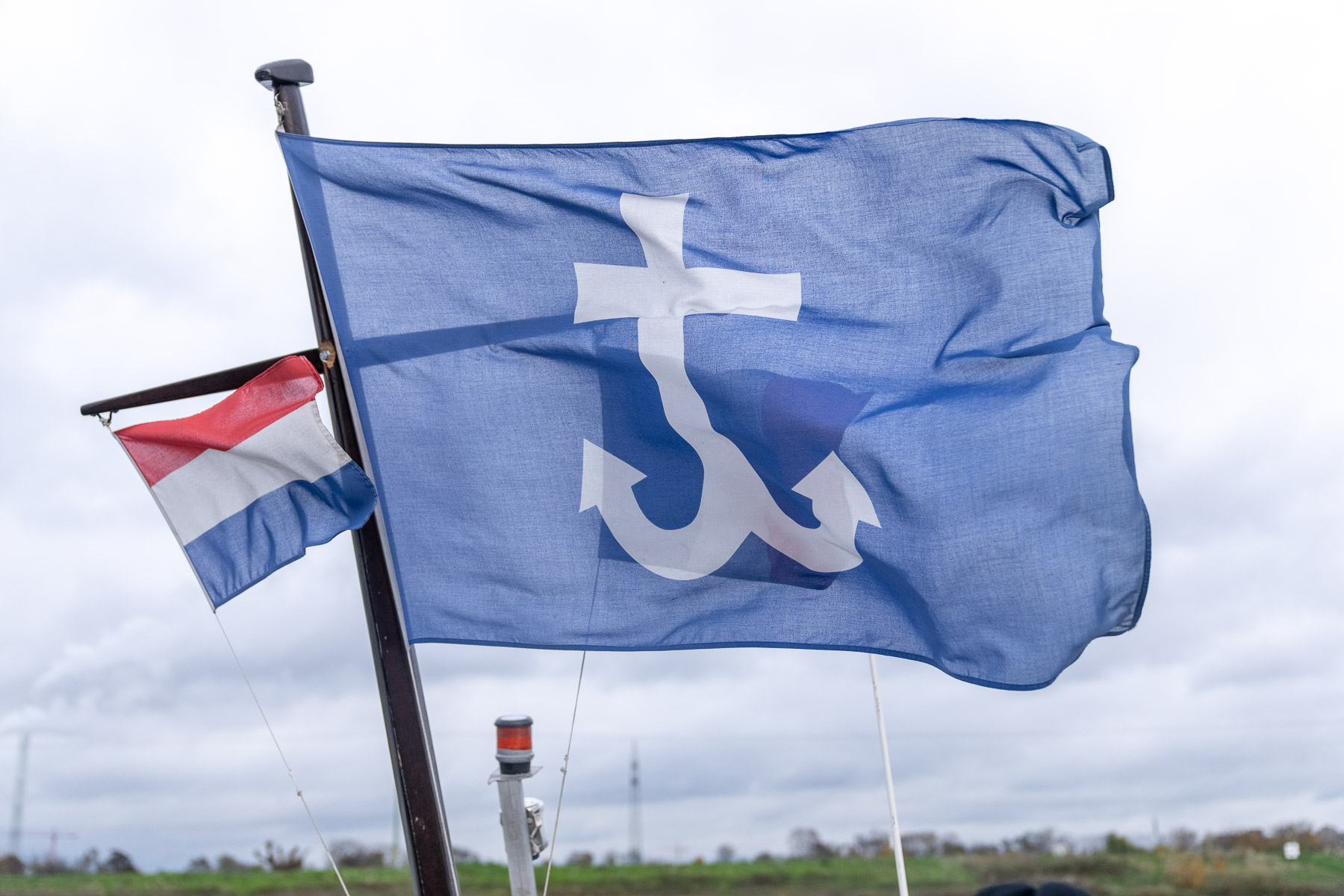 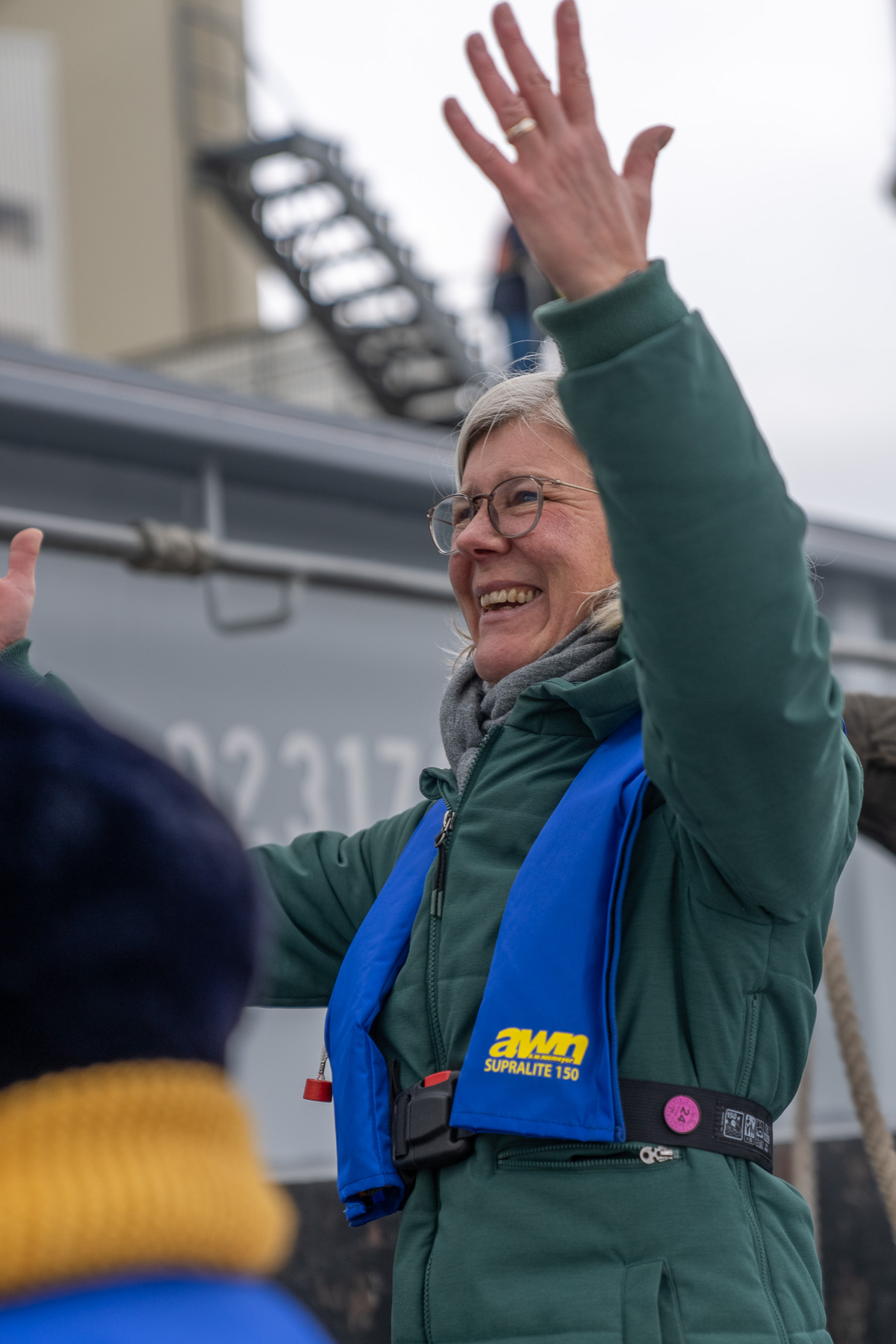 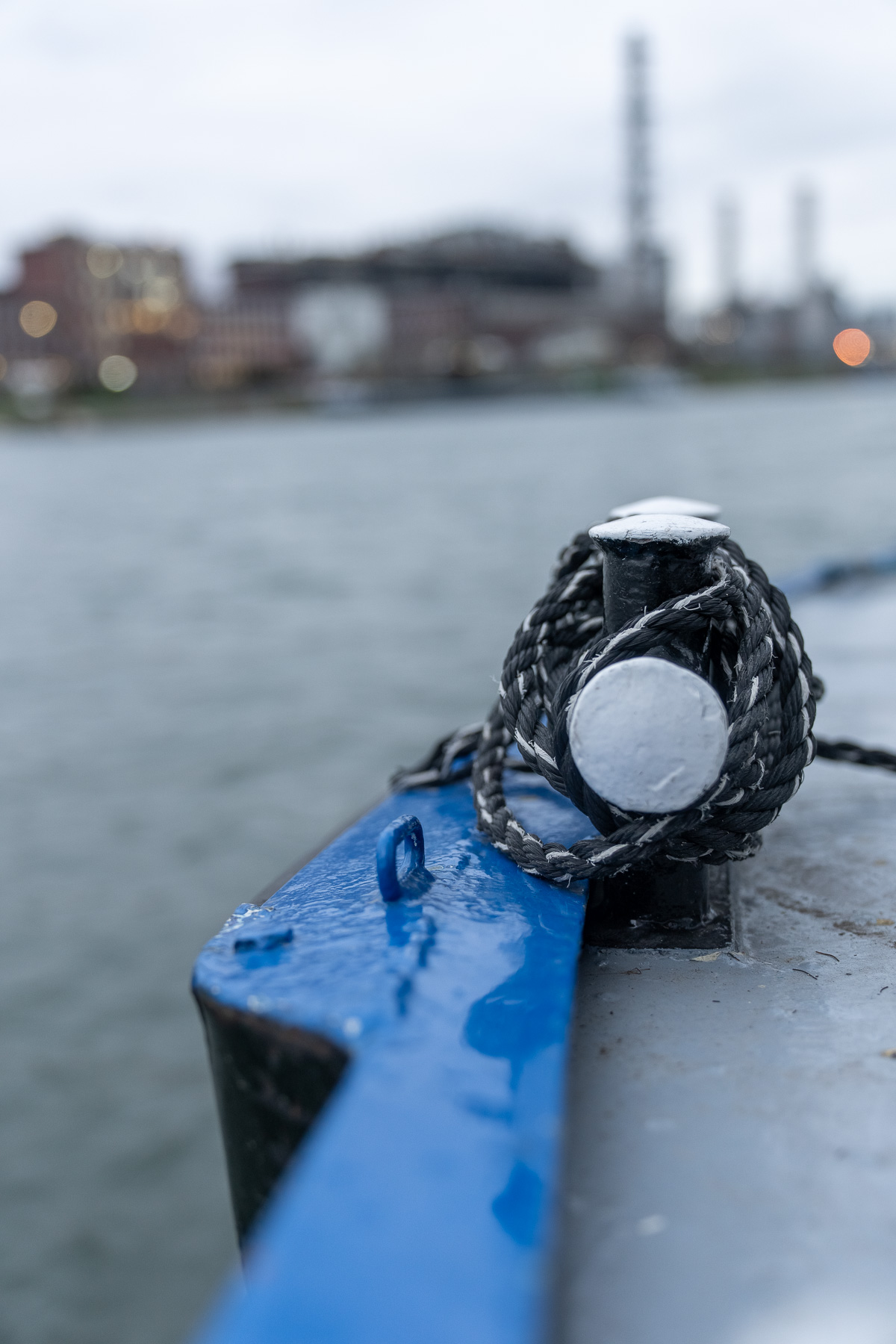 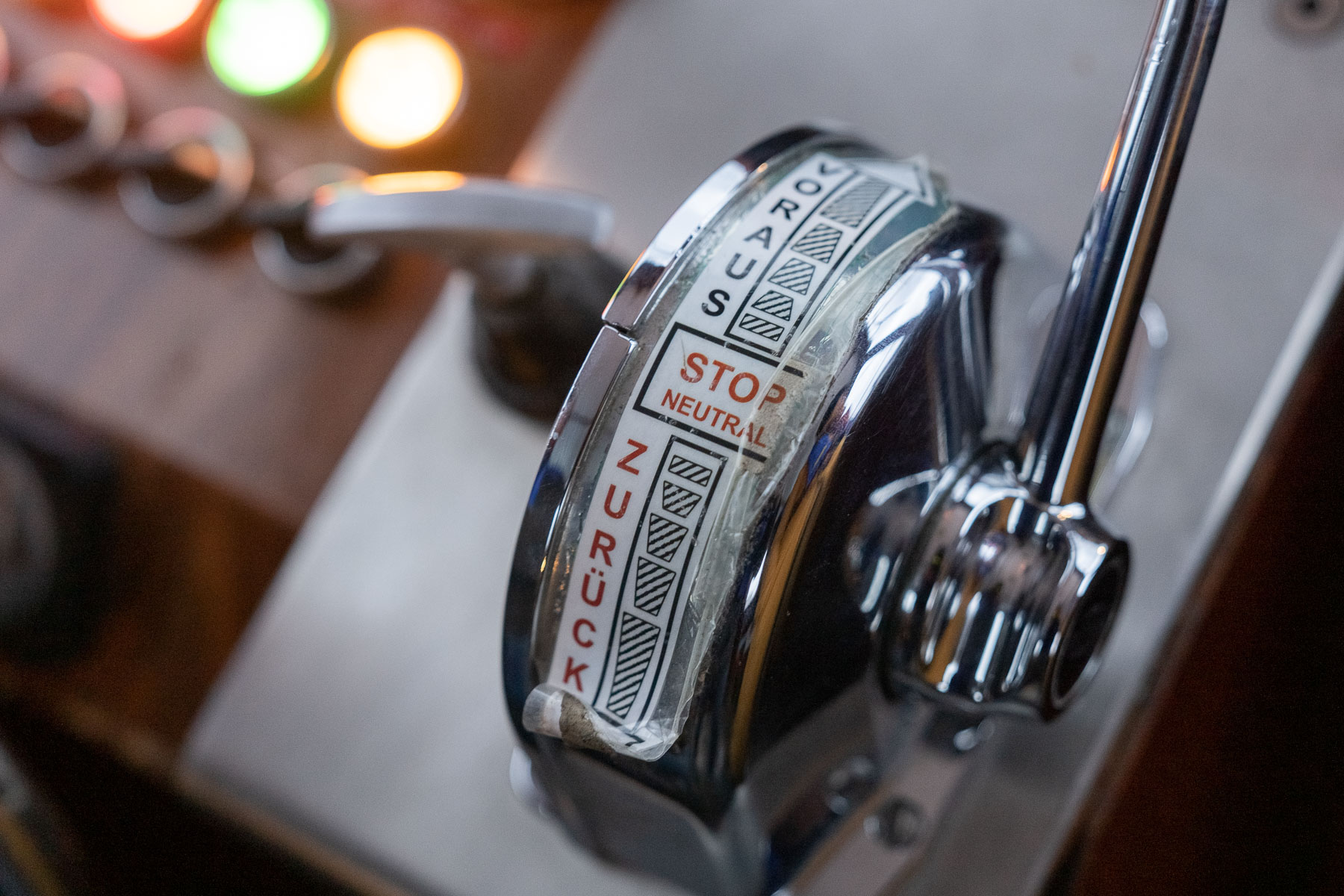