The barac project is art, a laboratory and a social cause all wrapped into one. It is located in a former barracks in Franklin, alarge area in the north-east of Mannheim freed up by the withdrawal of the US Army offering spaces for living, working and the birth of new ideas. Myriam Holme and Philipp Morlock have created a place for the creation of art—and of opportunities.

Myriam Holme opens a door leading to a staircase. The walls, the doors and the landings are painted grey. The space is a blank surface waiting for someone to play on it: a vertical studio and an exhibition space. “This is the idea at least,” says the Mannheim artist as he leads us to one of the artistic results in the next stairwell, one wing further on. Neon yellow threads run through the corridor, linking one banister to another. Pieces of dark polystyrene hang between them, like little comets—lonely, yet connected.

This piece of art installed in the barac space was created by the ‘I found you’ artist collective, a group of eight artists from the US, Uruguay, Great Britain and Austria, who found each other online during the coronavirus pandemic. They contacted Myriam in their search for a place to come together in person for the first time. The artists spent four weeks at barac in the summer of 2022. They faced themselves and their works. And this place on the outskirts of Mannheim. “That is exactly what barac is supposed to be: a temporary art studio where people from all over come together to create something new,” Myriam explains.

barac has been around since 2016. The space is housed in a barracks built by the Nazis. The US installed the Sullivan Barracks here after the Second World War. The building is located directly at the edge of the Panzerwald forest (link). For years, the US Army used to train here; armoured personnel carriers rolled through the forest for years. Silence eventually returned to the area when the Americans disbanded the garrison and left behind a 500 hectare area in 2011. It is an area five times the size of Mannheim’s city centre and opens up opportunities for the creation of new projects, greener housing and cultural experiments. 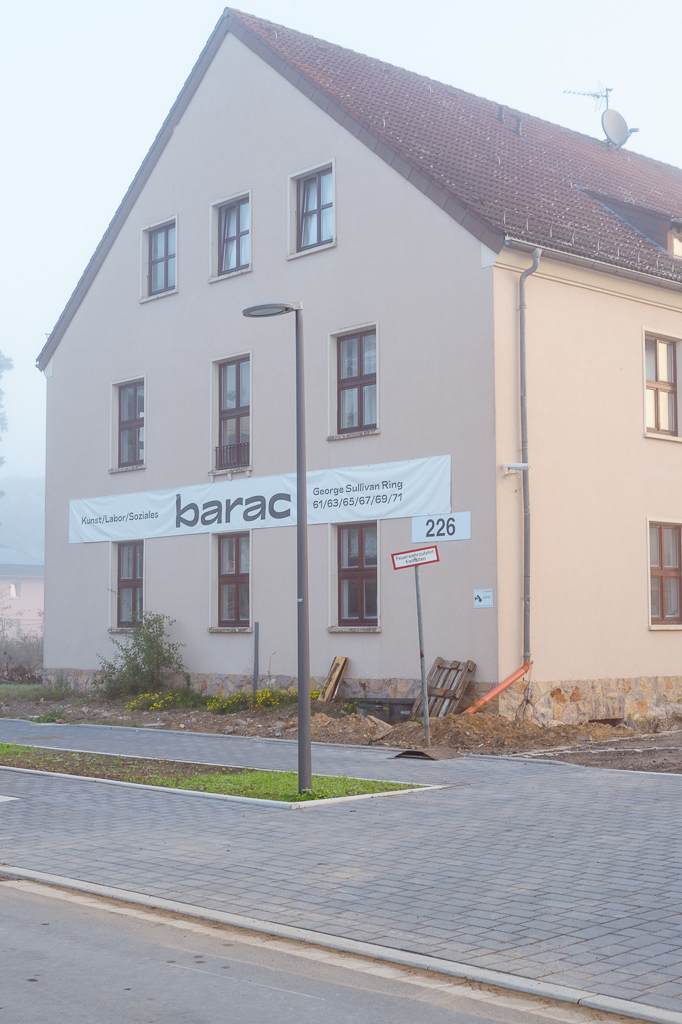 A former barracks has become a place for art. 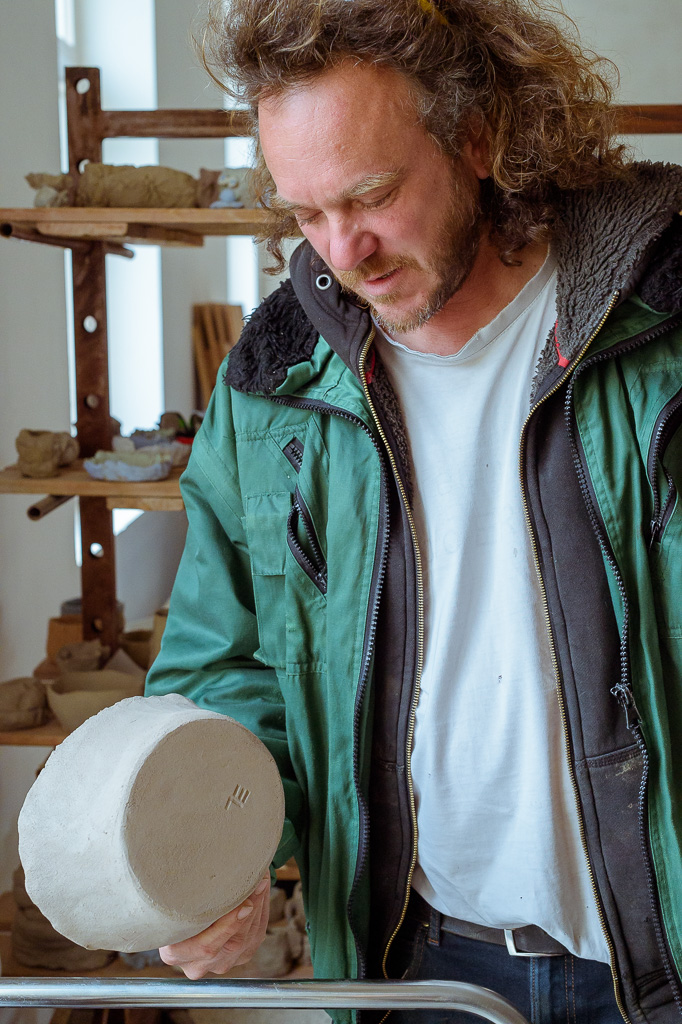 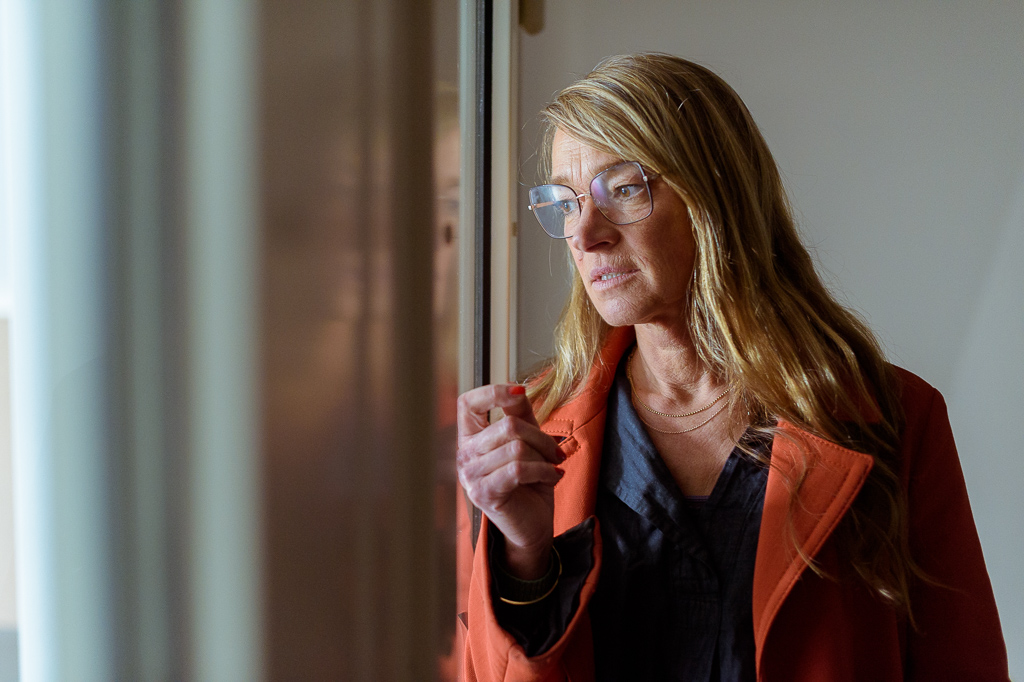 Myriam Holme intend to establish Mannheim as a city that attracts artists. 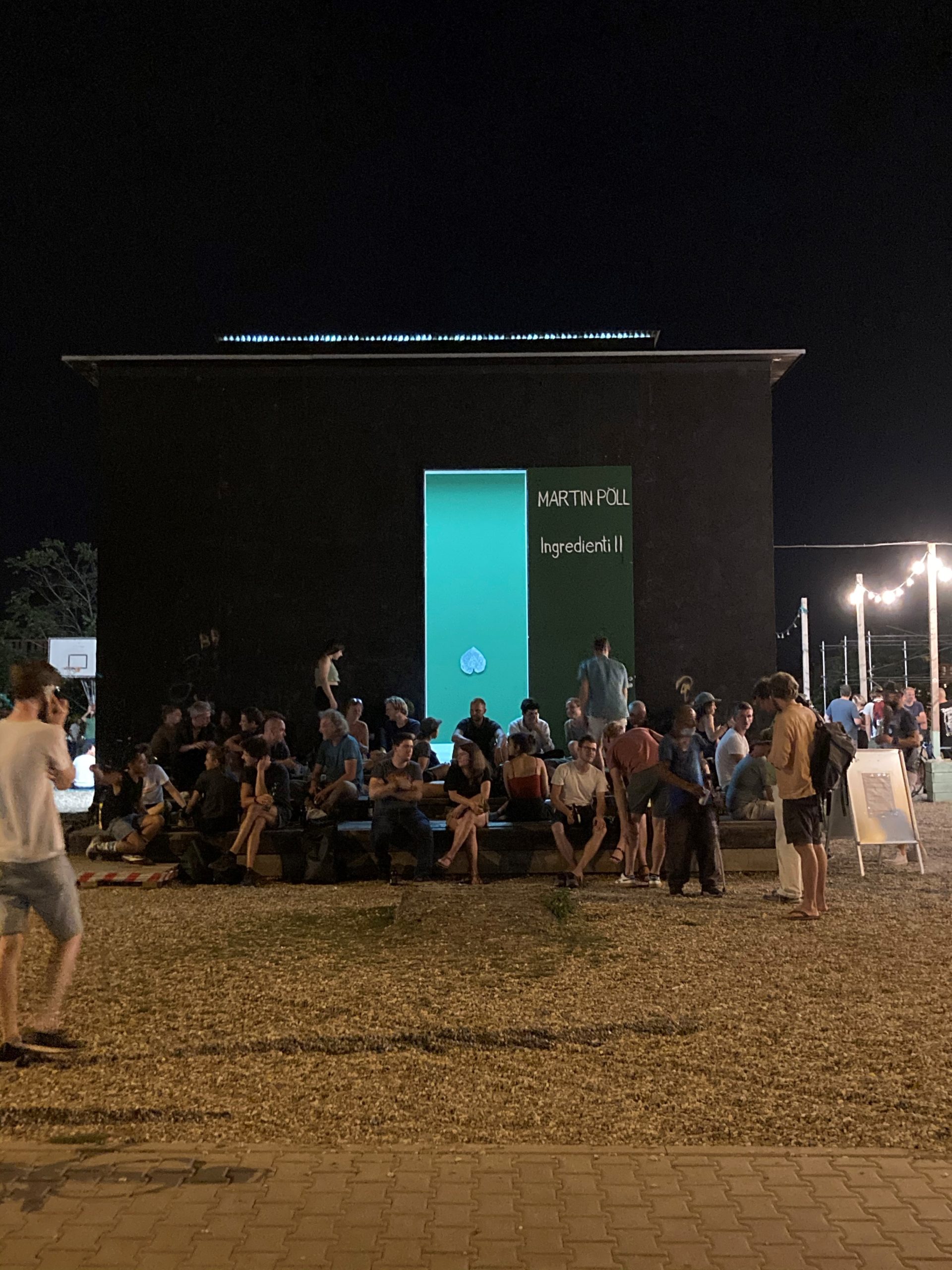 • Their Einraumhaus project was their first landmark. 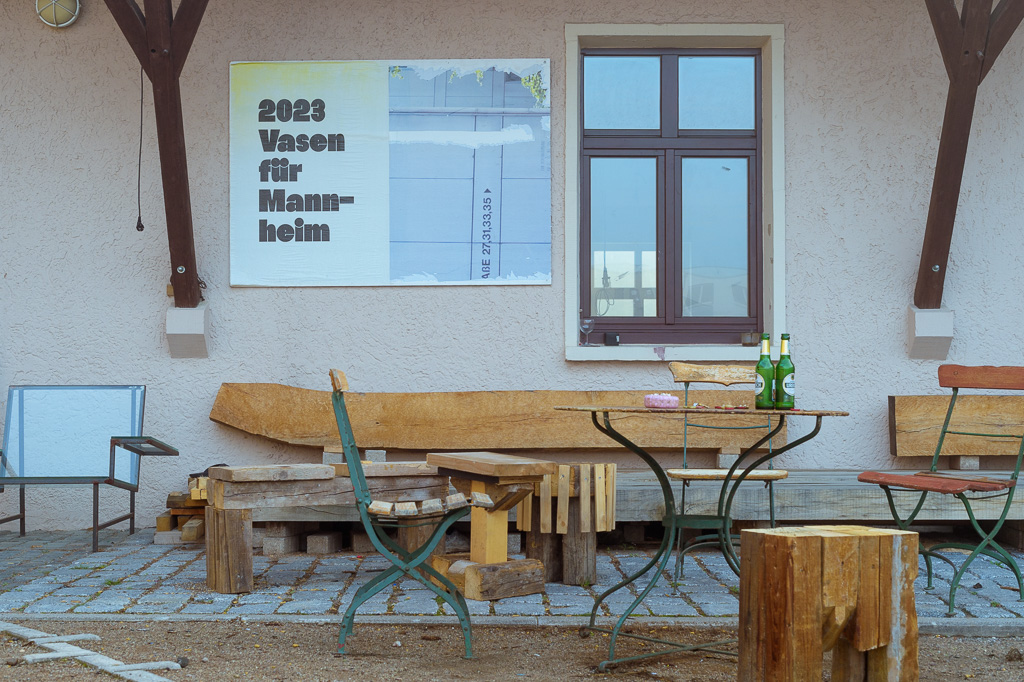 barac takes the idea of the Einraumhaus one step further. 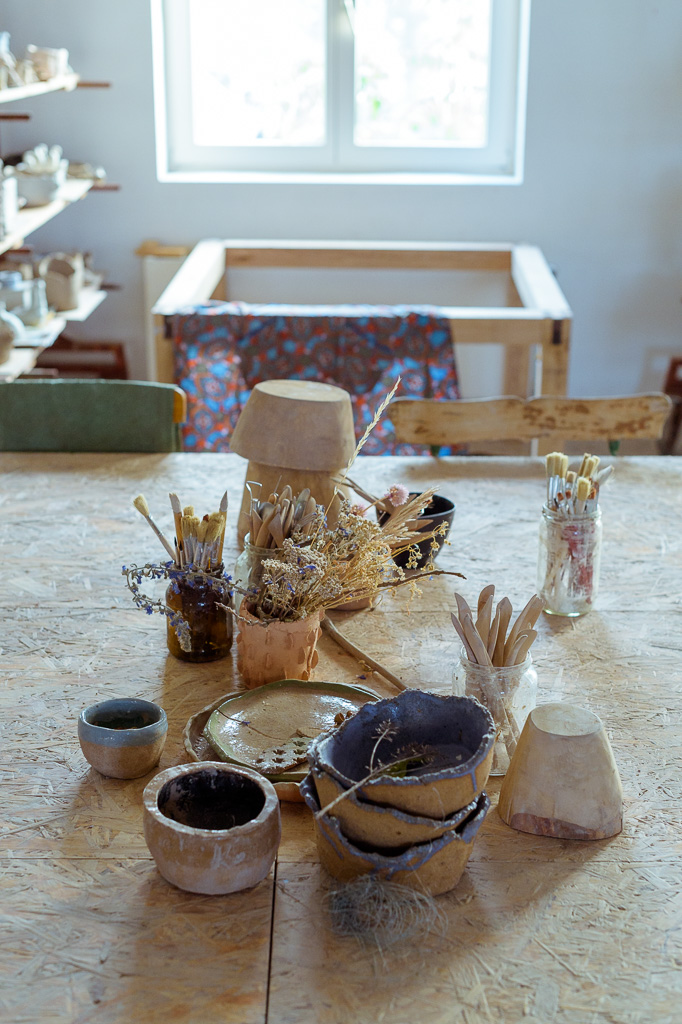 barac is art, a laboratory and a social cause all wrapped in one. 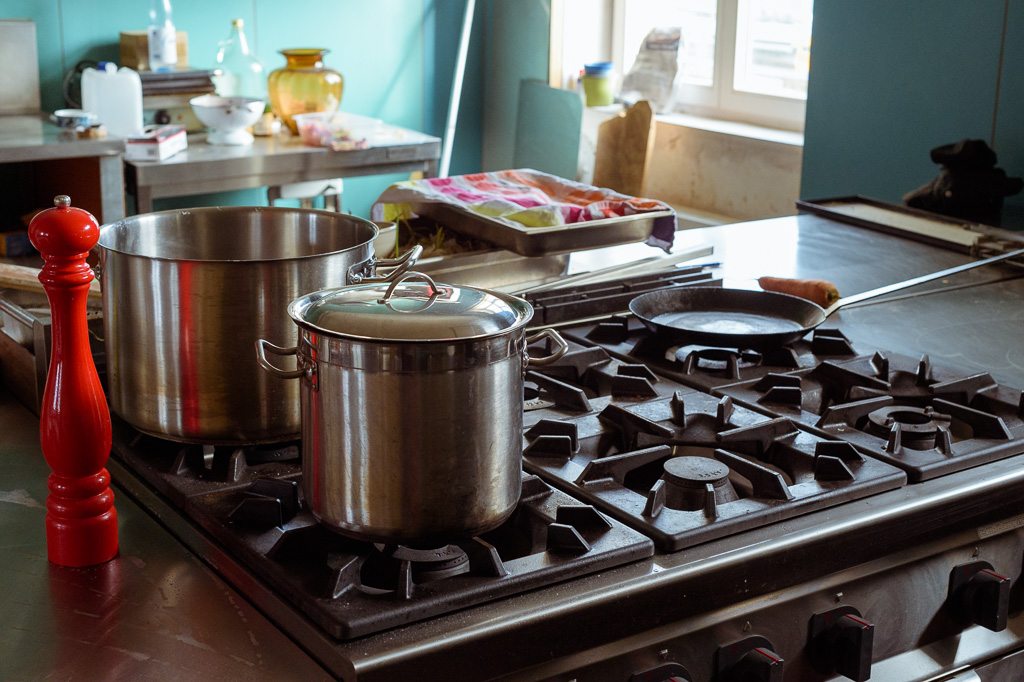 Everyone comes together in the kitchen: barac residents, visitors, artists and schoolchildren. 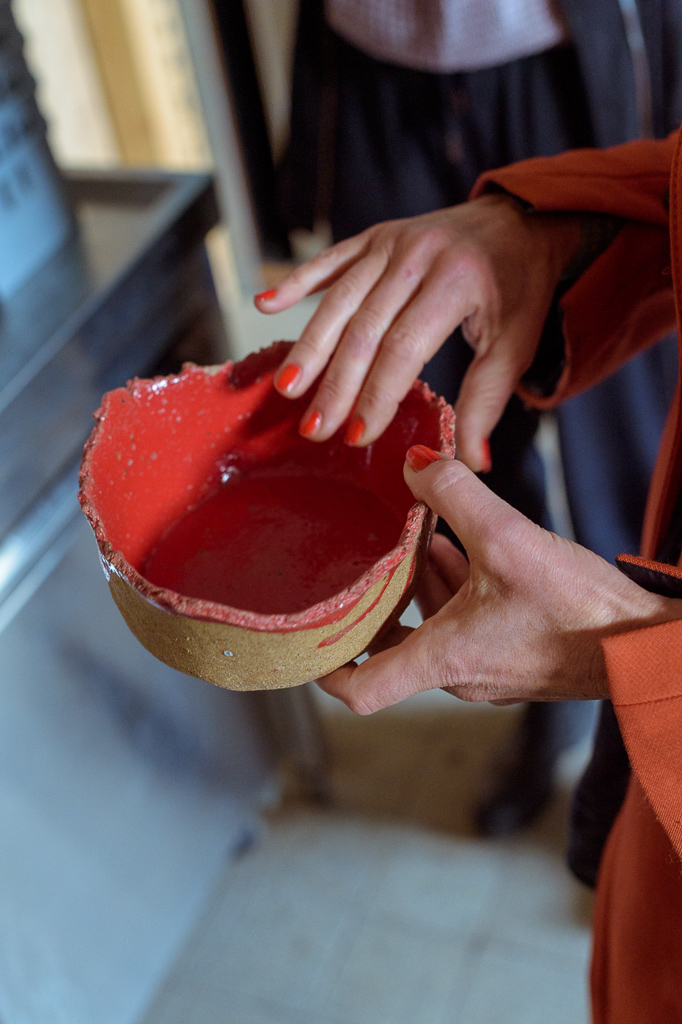 Myriam Holme and Philipp Morlock quickly realised what a great opportunity the conversion of the area was for the arts. Initially, the pair was only planning to stay in Mannheim temporarily before moving on. They met while studying at the art academy in Karlsruhe and soon found out that they could work and develop ideas together very well. They planned to move to the Ruhr area in western Germany after graduation. Berlin did not appeal to either of them. Instead, “we wanted to go where things are developing, structures are undergoing a change and free spaces are being created—spaces for art in particular,” Myriam says. “Not to a place where everything has been developed and there’s nothing more to do,” Philipp adds.

We noticed how great the potential is

Myriam was first to finish studies and moved back to her hometown of Mannheim. She grew up in the Gartenstadt district, not far from Franklin, so she settled in Mannheim instead of in the Ruhr area. Then the question arose: What does actually Mannheim have to offer for the arts? “We noticed how great the potential is,” Philipp recounts. It is a city situated in a large conurbation, but there are only few artists there, “especially none of our generation.” It was clear to both that they wanted to change that. “We know so many amazing people. We just had to manage to lure them to the city.” And they had to do so without a big budget; instead, they had a great idea.

This idea took shape in summer 2010, in the form of a walk-in sculpture made of metal plates. This Einraumhaus (literally: one-room house) stood on Alter Messplatz square for six weeks. It was a space without any access barriers, where they could invite artists, bring them together with collectors and organise exhibitions, performances, concerts and parties. The Einraumhaus made Mannheim a permanent place on the art map of Germany. Authorities got the message and supported the project. A year later, the Einraumhaus project got a bigger brother, which moved to the fallow between Alter Messplatz square and the Neckar river, while the “younger” one went on tour.

That was in 2011, the same year that the US Army announced it was pulling out of Mannheim. Philipp was looking for a large hall for a project at the time. He took the chance and asked if he could use the sports hall on the Turley area. And he got the key. “We were among the first persons to be on the conversion sites after the Americans,” he says. Parts of the area looked like a deserted city after a nuclear war, Myriam recalls that day. Some of the mail was still in the letterboxes. But where some people only saw dilapidated houses, Myriam and Philipp saw raw materials, resources and opportunities. From the beginning, they contributed their ideas to the conversion process. Their dream was to have a house for art—one that would take the idea of the Einraumhaus further and would become a place to go for young artists after their studies. A house where art could be developed further and made accessible to the public at the same time. A house for encounters.

Their dream became reality five years later, supported by the Trias Foundation, who bought the 2.4 million euro property and converted it into a 99-year leasehold. The house is even larger than originally envisaged: some 4,400 square metres. However, Myriam and Philipp quickly filled it with new ideas, together with the architect Andreas Handel.

The path to barac still looks like a road to a construction site. Fences are everywhere, excavators are digging, cranes are turning. A number of home cubes have been planned and now some have appeared across the road. They are square-shaped, practical and energy-efficient. The area is to become a place for new living. barac already is. The building unfolds in a U-shape between crooked pine trees in which the morning mist still lingers. The wing on the right is the inclusion wing. People with mental and physical impairments live here. On the left is the art wing. This is where the barac scholarship holders live, and where studios, workshops and laboratories are located.

Common rooms are located in the middle section of the building, which connects the two wings: the kitchen, a bar, a large lounge. The space is currently used as a storage area for vases of all shapes, colours and sizes. They were created by artists, but also by schoolchildren, senior citizens, disabled people and refugees; and on Sundays by anyone who felt like doing pottery. There will be even more vases in the months to come. 2023 pieces is the goal until spring 2023, because this is when the BUGA, the German national garden show, will be opened in Mannheim. Laura Sacher runs the earth lab at barac and is responsible for this project—a project that wasn’t planned. It came about when the artists discovered clay in the mounds of earth at the construction sites. A whole vein of clay runs through the Franklin area. It is much too good not to use it, Philipp and Myriam thought. They usually use almost everything they find here on Franklin or elsewhere.

The kitchen is made up of appliances that former residents of Franklin left behind. The wall is made of the doors of their houses. The desks are made of the old dance floor of the national theatre and the glass walls are from the headquarters of Bauhaus, the DIY chain. Philipp regrets that so much was demolished in Franklin. He has tried to preserve as much of it as possible, dismantling letterboxes and signs, saving furniture and even a complete car wash. “And yet, far too much was lost.” He shakes his head. For him, this was an act of inconceivable waste.

The artists at barac work mostly with what they find on the premises. They create something new from the old, something lasting from the discarded. And they meet people here whom they would probably never have met otherwise. “The encounters are incredibly enriching,” Myriam thinks. All scholarship holders remain connected to barac, many of them even stay in Mannheim. At barac, there is not one goal that will or must be reached by a certain time. Instead, there are always new goals, such as the village square project or perhaps an exhibition in the vertical studio. One thing is certain: there are always spaces opening up at barac. 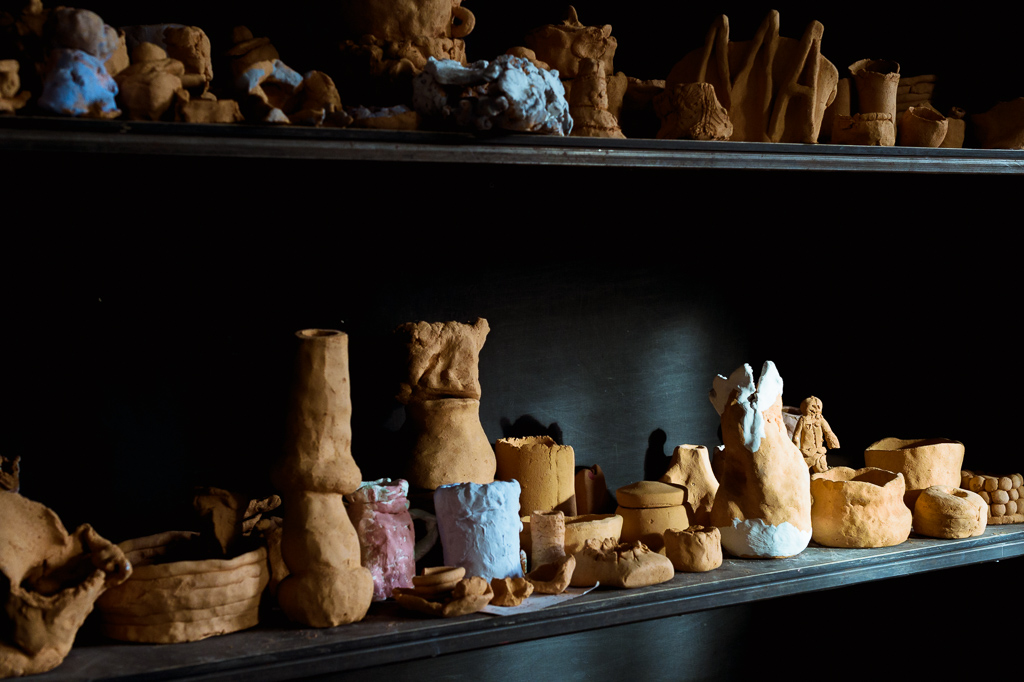 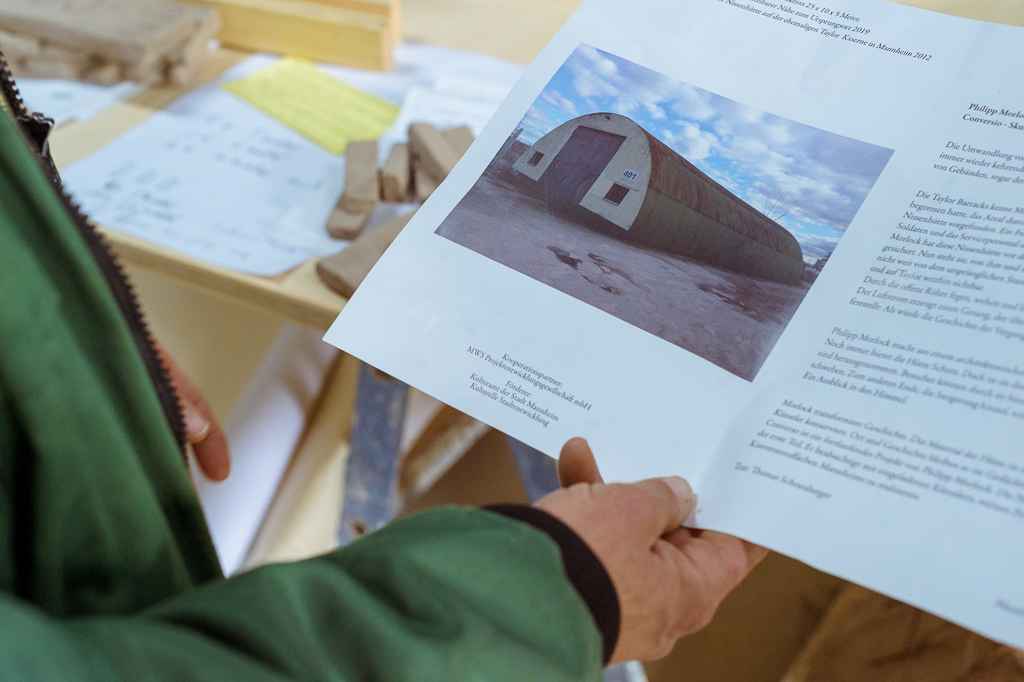 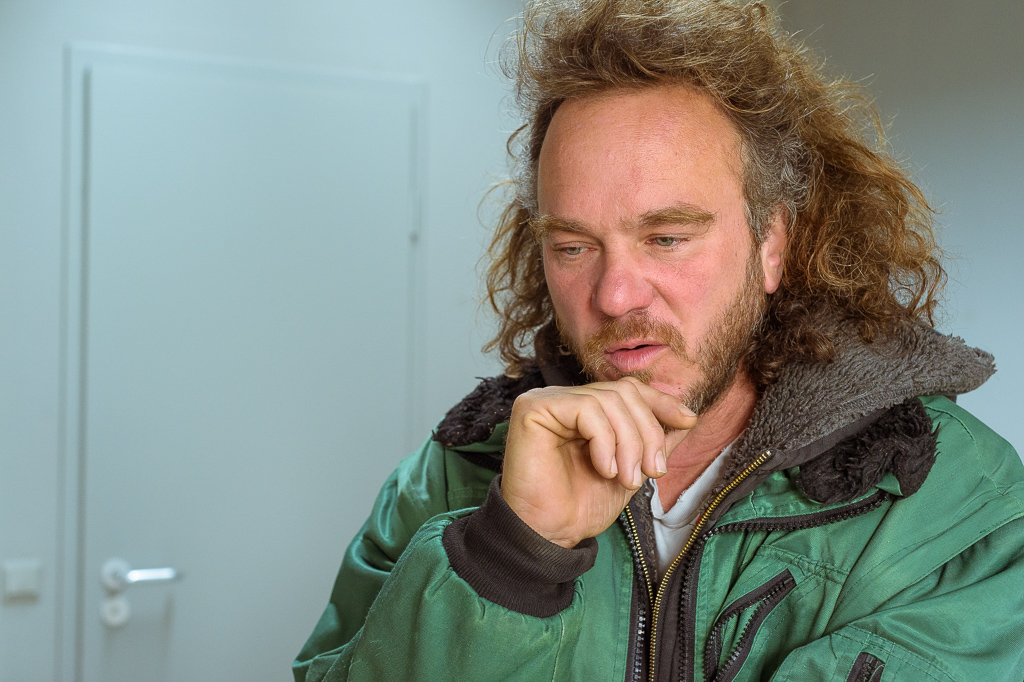 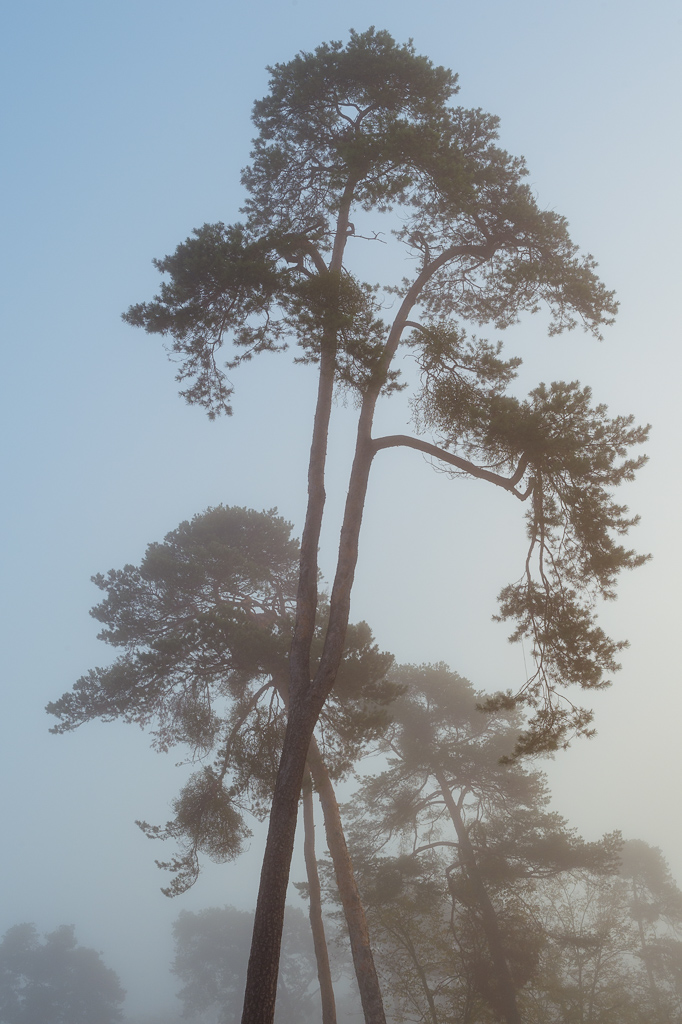 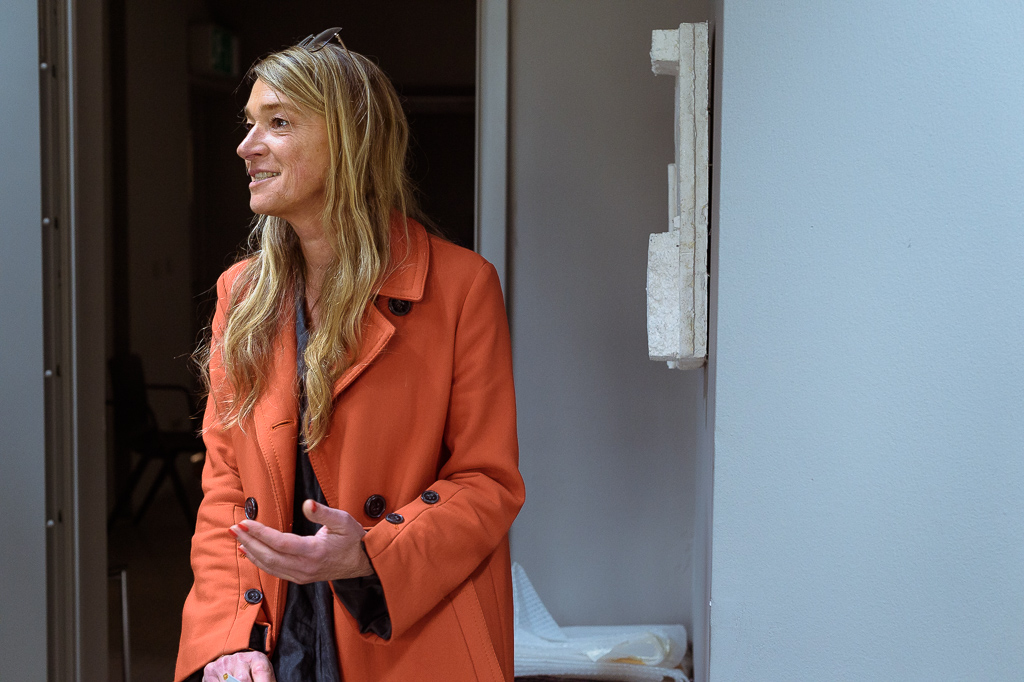 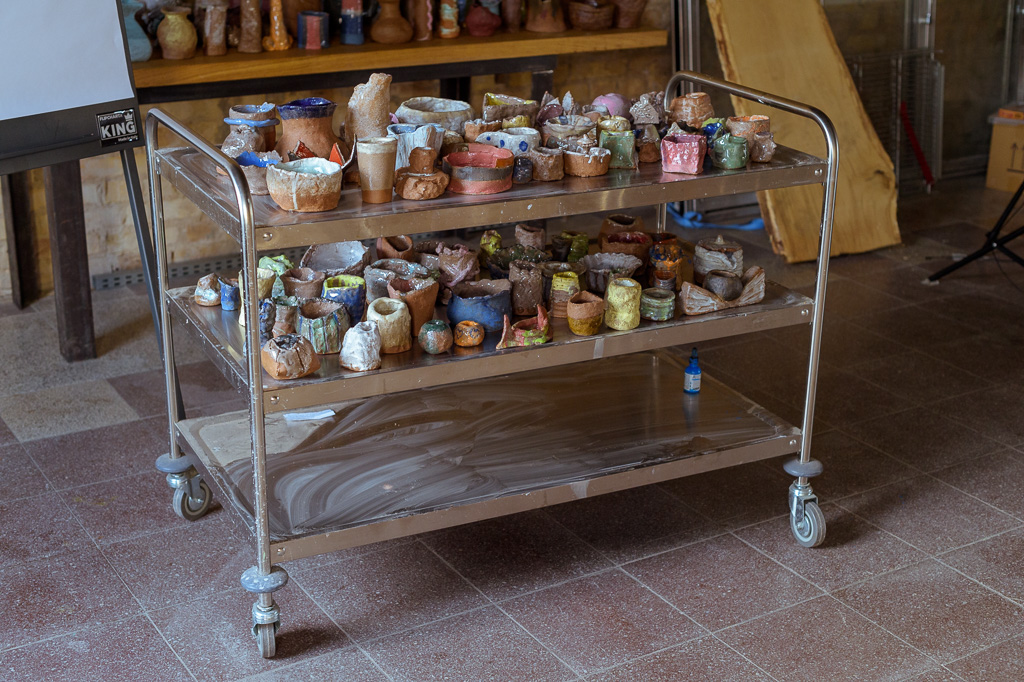 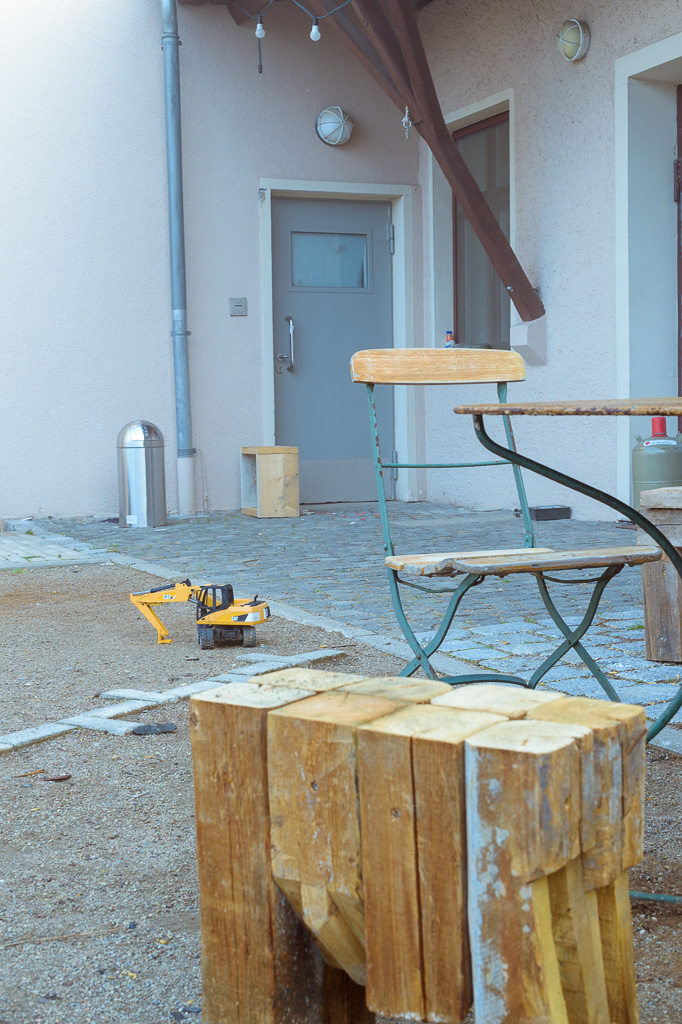