Having experienced how pleasant a walk along a sonorous trail in Luxembourg can be, Uli Krell knew: We need such a thing in the Odenwald, too. Hikers were able to seek melodious silence close to Hammelbach in the Bergstraße district soon afterwards.

Uli Krell stands quietly between two wild cherry trees. Quietly waiting for a breeze. Because above him, at about six metres height, a number of wind chimes dangle from a tree on a cord. Only a light wind, however, gently moves the chimes on this sunny and mild day in November: The musical bodies made of aluminium are softly rung by wooden mallets with shiny, blue rhombuses hanging beneath. The sound reminds of faraway bells; an airplane high up above the Odenwald drones even louder than that. 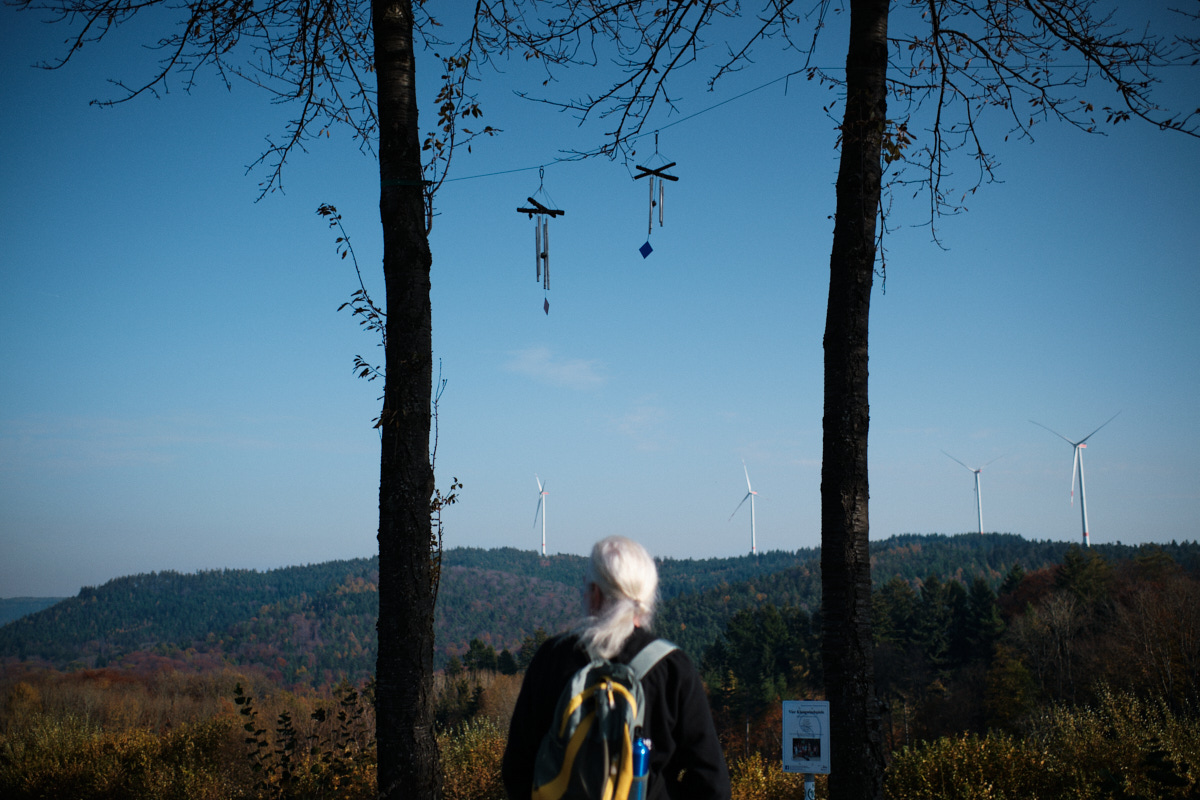 The stations of the sonorous trail invite you to rest—to both produce and listen to pleasant sounds.

Thanks to Uli, the ears on signs indicate the way forward in Hammelbach, a part of Grasellenbach municipality. On an eight-kilometre circular walk, stations invite you to rest—to both produce and listen to pleasant sounds. “I have always been an ears person,” says Uli. In 2009, his wife gave him a trip to Hoscheid in Luxembourg as a present. The municipality has a sonorous trail and Uli knew straight away: “I want something like this in my home region, too, so I don’t have to go all the way to Luxembourg all the time.” And so he designed the stations of the trail, undertook a fund-raising campaign and constructed the objects in cooperation with some friends and supporters. Some two and a half years after his trip to Hoscheid he installed the first sound object in May 2012 close to his home village. 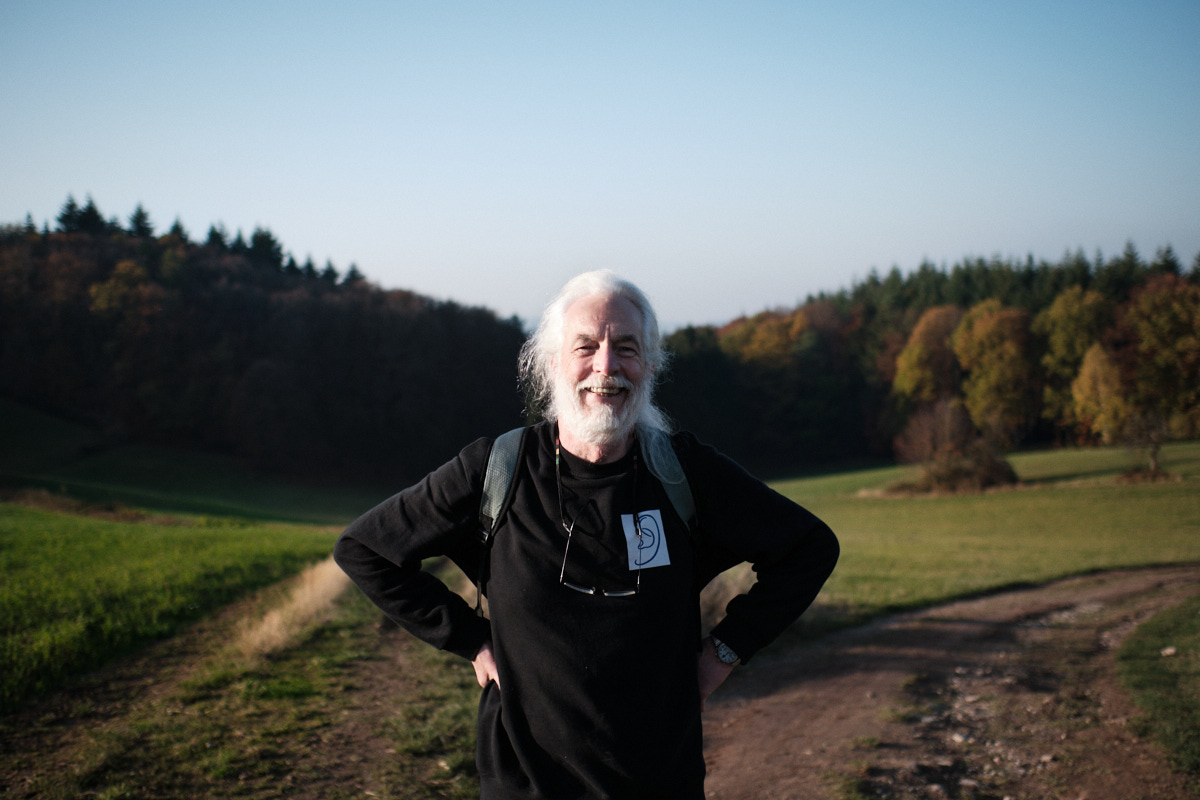 “I have always been an ears person,” says Uli.

Lion’s wind harp is a special station for the father of three sons and grandfather of two grandchildren. The harp’s top is an old satellite dish, from which the long strings go all the way down to the ground. The harp remains silent on this windless day as well. All of its strings are tuned to the same low tone, which is a G and hence one of the two Earth tones, Uli explains. “When you keep doubling the oscillation period of the Earth’s rotation between day and night, you’ll finally reach audible band, namely a G.” Wind makes the strings produce overtones of the G at varying pitches corresponding to wind force.

The wind harp was installed in 2014 upon his first grandchild’s birthday and therefore named after him: Lion. Uli keeps fiddling about with his objects. The harp, for example, used to have metal strings in the first place, but the wind went past it without setting it swinging. Then he tried to use roughened fishing line. Today, it is wicker cords that generate the sounds. “Wicker cords are more durable and their rough surface catches the wind much better.”

Uli Krell is a casual bloke. He wears a sweatshirt with an ear logo on it and his long, white hair is loosely tied in a ponytail. He spent his entire professional career as a teacher for physics and mathematics at the Überwald-Gymnasium grammar school in Wald-Michelbach until he retired. “Playing music has always been the non-rational balance for my head-some subjects,” he says. “It has always moved me right to my core.” With the sonorous trail, he has put a project into practice that combines his different passions: constructing sound objects by using physical and mathematical principles. He conducts series of measurements on how the change in material thickness or diameter affects the sound, for instance. He has even figured out formulas—and has kept learning new things. “The scholarly physicist inside me was convinced that sound tubes with double the length of otherwise identical tubes should have half the frequency, resulting in a tone one octave lower.” But he came to realize it went even up to two octaves. He hasn’t found a scientific answer to the question why this is so yet. In his experiments he also found that the tones rise when the diameter of a sound tube becomes larger. Initially, he expected the opposite to be true—particularly because the thickest guitar strings are the ones that sound lowest. 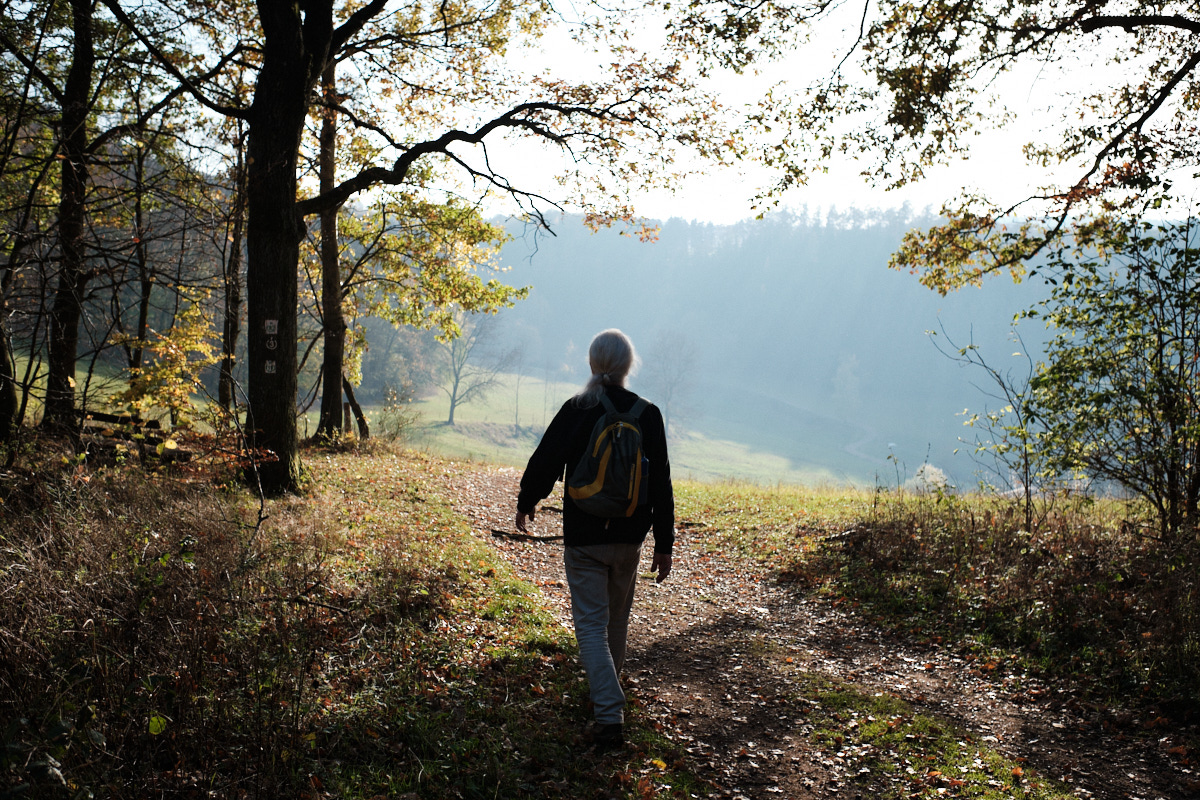 The circular trail leads across high ground from where you can see Uli’s birth town at a distance: Groß-Bieberau. He loves the tour along the trail not only because of the sound, but also because of the view of the landscape—the forest and geological conditions here, with its sandstone and granite rocks and the Weschnitz river rising just behind the boundaries of Hammelbach village. Spring water babbles through two little, wooden channels into a pond that is surrounded by fallen leaves that rustle loudly with every step you make. Sounds emerge from everywhere. 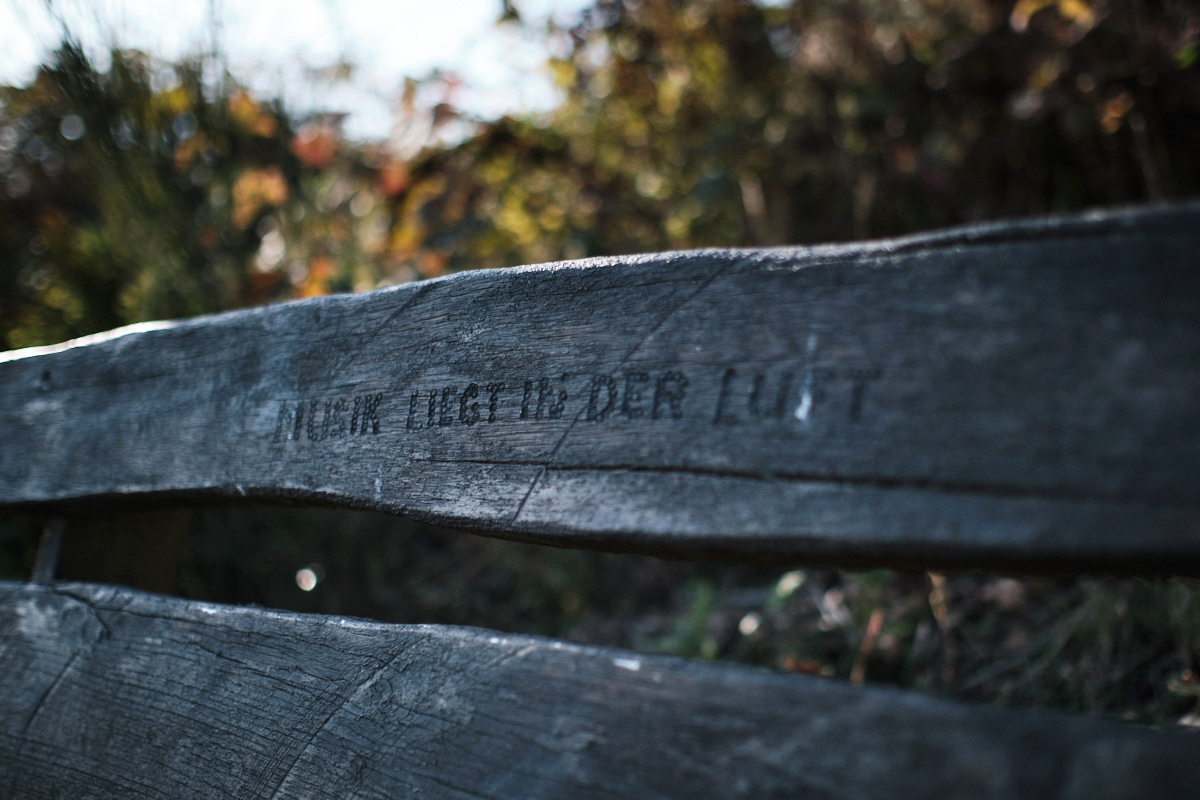 “Music’s in the air”

On this day, the Odenwald ensnares its visitors with an endless richness of autumn colours: a golden yellow tone, gentle green shades and an impressive orange-red tone sound in your eyes. Now, the trail leads from the high ground to the forest. On the side of the path, the Röhrenglocken-Achtklang (literally: tube-chimes eight sound) emerges: It is an object with eight sound tubes arranged according to size and its name in German symbolizes mindfulness, ‘eightention.’ The trail leads through a forest that is not commercially used. 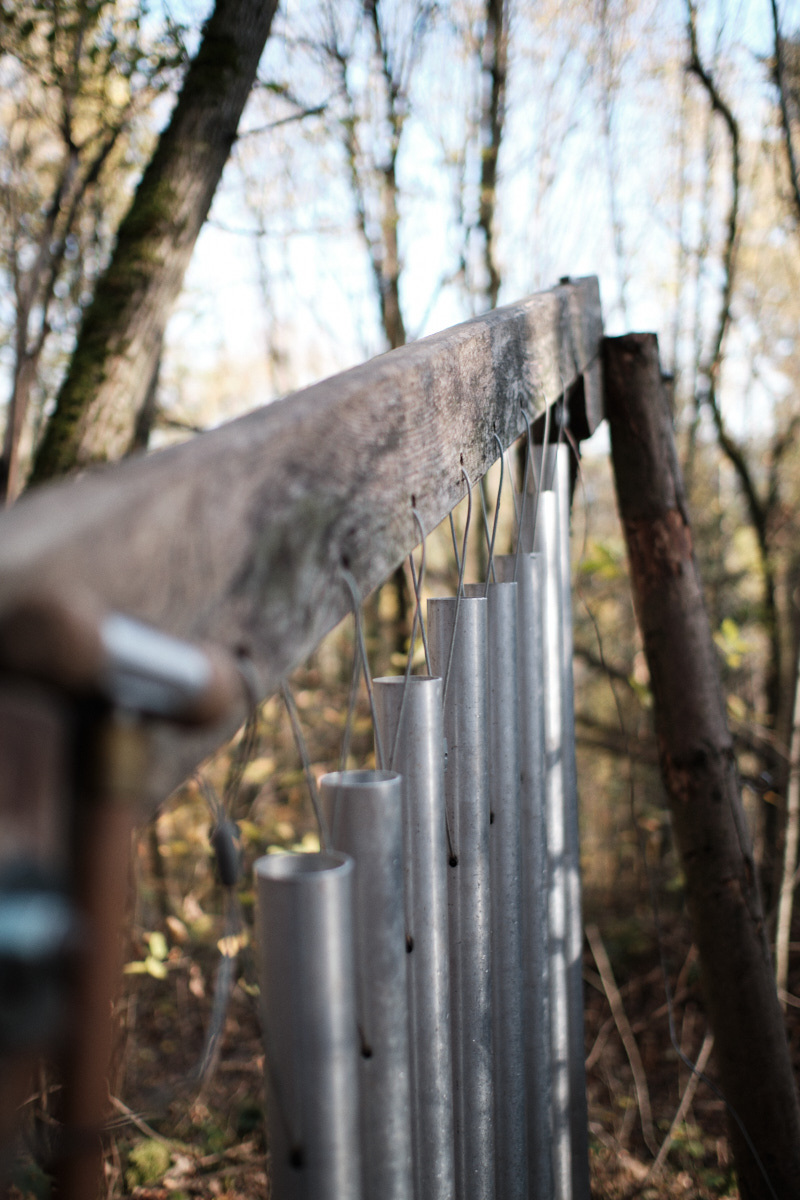 Every fortnight, at the latest, Uli does an “inspection tour” with his bicycle. There is always an object that needs fixing. Just like on this tour: One of the oak plates of the forest marimba literally steps out of line. Uli gets started straight away, fixes the fastening and soon strikes up South American rhythms on the local timber. Behind the oak bodies, resonance tubes are connected to a granite plate. When Uli designed this sound station, he asked a forester for advice, who organized not only the heavy granite plate for the sound object to be on-site straight away, but also the required holes to be drilled in it with some heavy machinery and a power unit. 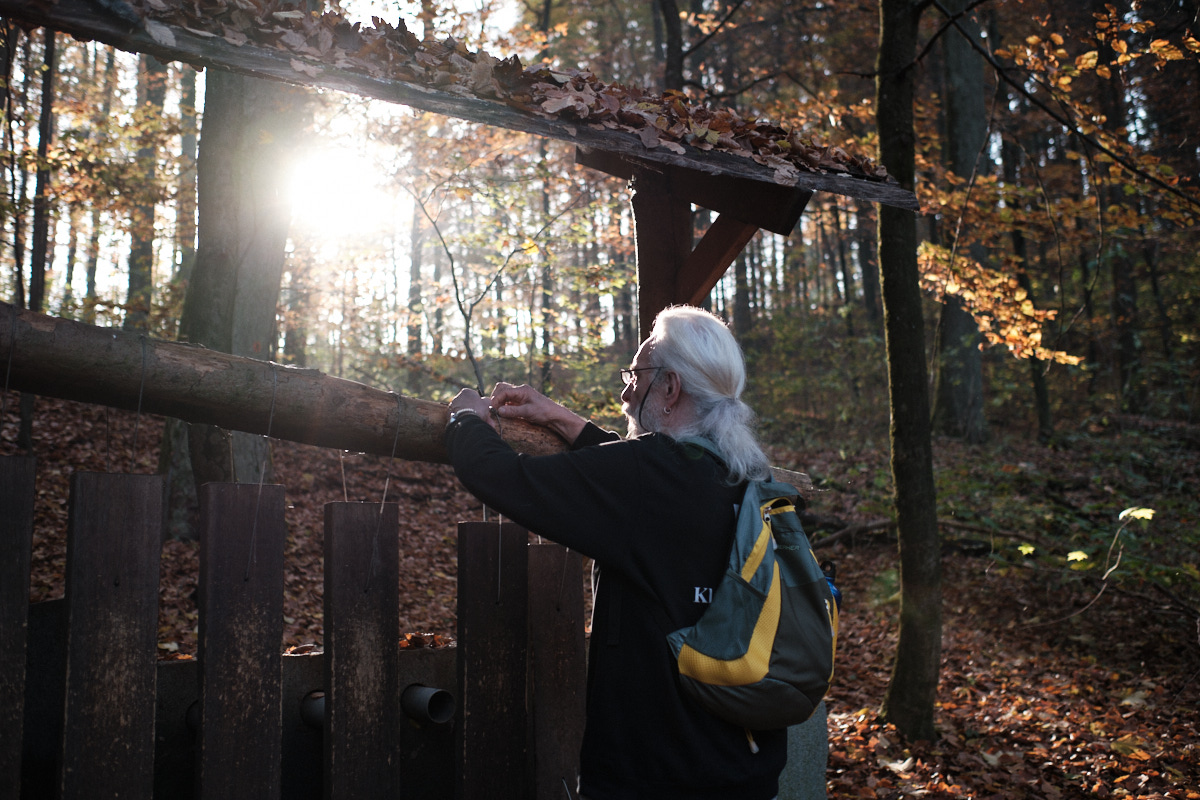 There is always an object that needs fixing – Uli on “inspection tour”.

Another station offers a xylophone comprising various types of wood: “The nature of a tone depends on a number of factors, among them the geometric structure,” Uli explains, “that is, how long, wide and thick a sound body is.” In this case they all have the same geometric measures, but the material differs: pear, ash and lark, for example. Uli presents the different qualities that make muffled sounds rather than harmonic music. “Oak is not really a tone wood,” the expert explains. “Spruce sounds much brighter, because it vibrates much more.” Hikers and strollers can rest at a number of stations like the xylophone, relax on a bench and attend to the sound installations. Furthermore, a forest restaurant, the Waldgaststätte Alt-Lechtern, invites passers-by to stop-off. 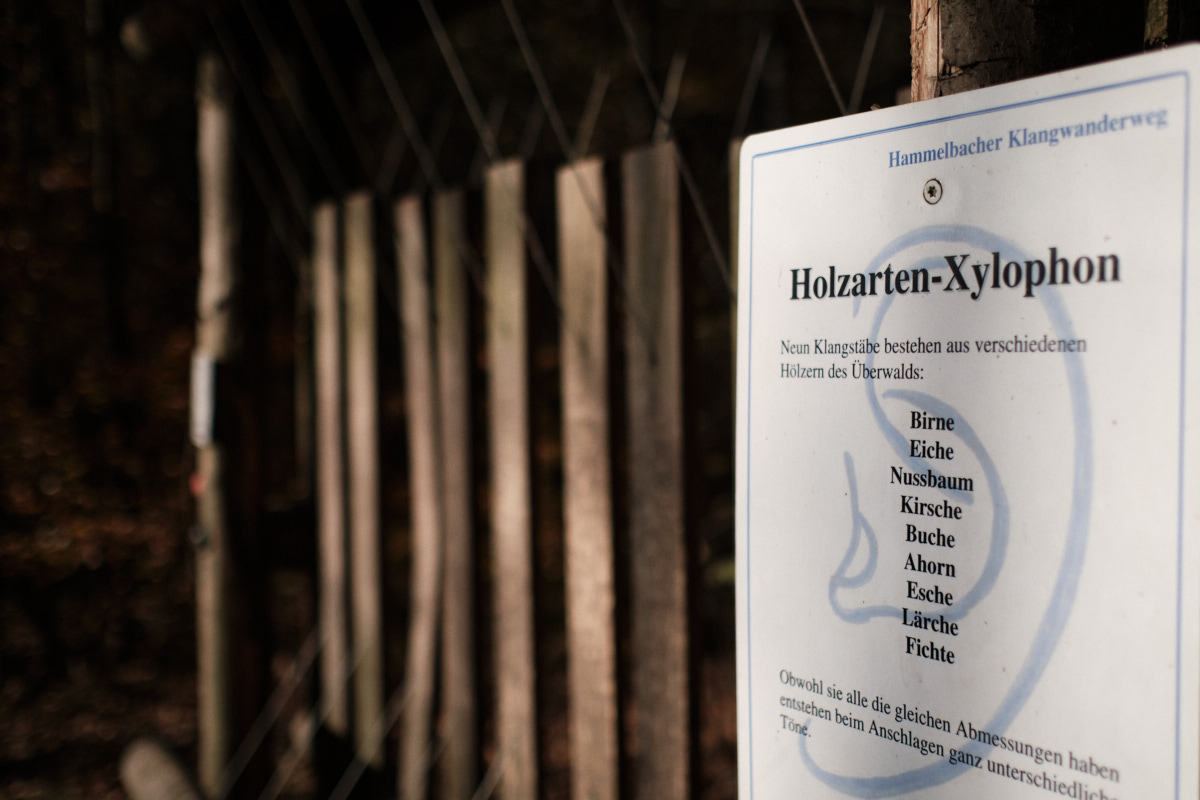 The sound of nature: a xylophone comprising various types of wood.

The budget available for the sonorous trail was rather tight. So, Uli has become very creative during the design process, also in terms of materials procurement: The mallets’ tips are made of dog’s toy balls or champagne corks. The wind lyre is made of a piece of stovepipe. And the large Überwald-Glocke bell with its massive sound body made of aluminium is set swinging and made ringing at a low pitch by means of a pram’s wheel. Brass bodies would sound even nicer, sure, but they’d probably get stolen out here, thinks the originator. Uli passes his passion for sounds on to children: He constructed sound objects with a group of them in a holiday programme and the results are now placed in the centre of the village of Hammelbach, marking the start of the hiking trail. 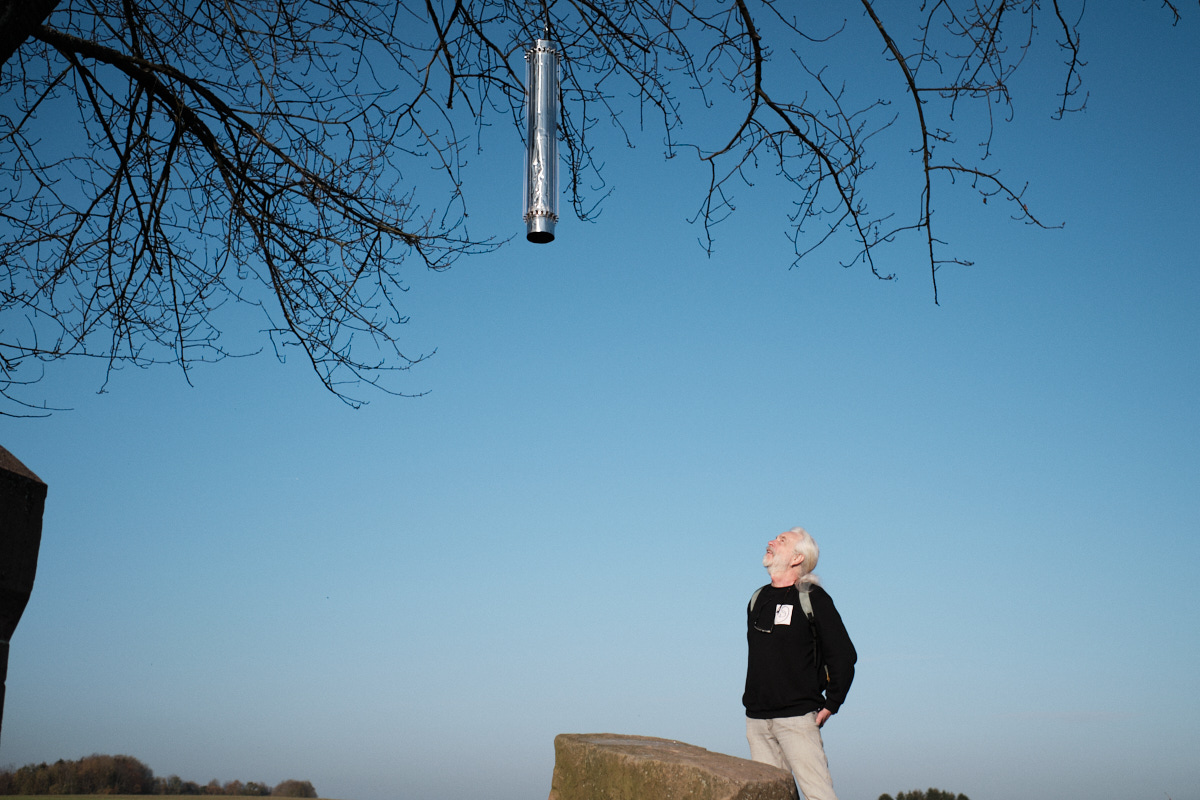 The retired teacher doesn’t think much of retirement – and so the sonorous trail keeps growing.

The retired teacher doesn’t think much of retirement anyway. His most recent sound stations with non-weather-proof objects, such as a sound chair with strings on the back of it, are now located in the Café am Markt in the village centre. However, the outdoor trail keeps growing as well. His next project is the “Hammelbacher Kerscheglocke” (which, in dialect, literally translates to something like Hammelbach ‘cherrch bell’): His idea is to hang a large number of little bells in a cherry tree and…how loud they ring, will be up to no less than the wind.