The Odenwald is characterised by granite and Bunter rocks. At four locations, the Geozentrum Tromm network shows how geology has shaped local history. It does so from the greatest heights and with deep insights and along a number of livelystations.

There are 192 steps. They lead higher and higher up. There is nothing under your feet but the steel grating of the stairs—no beams, no pillars. You can only see the crowns of the trees that become smaller and smaller until you reach a platform, where the view opens up. You can look over the valley of the Weschnitz brook, the Rhine Rift Valley and the mountains of the Palatinate Forest. On the other side, you can look deeper into the Odenwald to its highest mountain, the Katzenbuckel.

The Tromm mountain is 577 metres high. Completed in 2022, the new tower rises even further skyward by almost 34 metres. Locals call it the ‘ladder to heaven’ because the steel construction juts out over the forest at such an angle that the viewer at the top feels as if floating above the trees. Theo Reichert lets his gaze wander. The local of Wald-Michelbach is a Geopark on-site guide, and he sees much more than the beautiful view. From up here, Theo is able to look directly into the history of the Odenwald. “This part,” he says, pointing towards the west, across the Weschnitztal valley, “used to be the rich Odenwald.” The soil is fertile here and the wide valley allowed for large-scale agriculture with good yields. It’s easy to recognise this even today. The landscape is open and the forest forms rather small islands between the fields. On the other hand, the forest to the east, called the Überwald, is denser. “It was mainly small farmers who lived there,” he says.

Theo explains that the reason is to be found beneath the ground. “The Trommturm tower is situated directly on the transition area from granite to Bunter.” While the granite in the west provided fertile soils, the mineral-poor sandstone soil in the east was less suitable for agriculture. And the fact that there are different types of rock here causes even more differences. “Deciduous trees grow much better on granite, whereas conifers prefer sandstone. Wherever you see blueberries, you can be sure you’re standing on sandstone. With woodruff, it’s more likely to be granite.” So, the rocks divide the Odenwald into two areas. 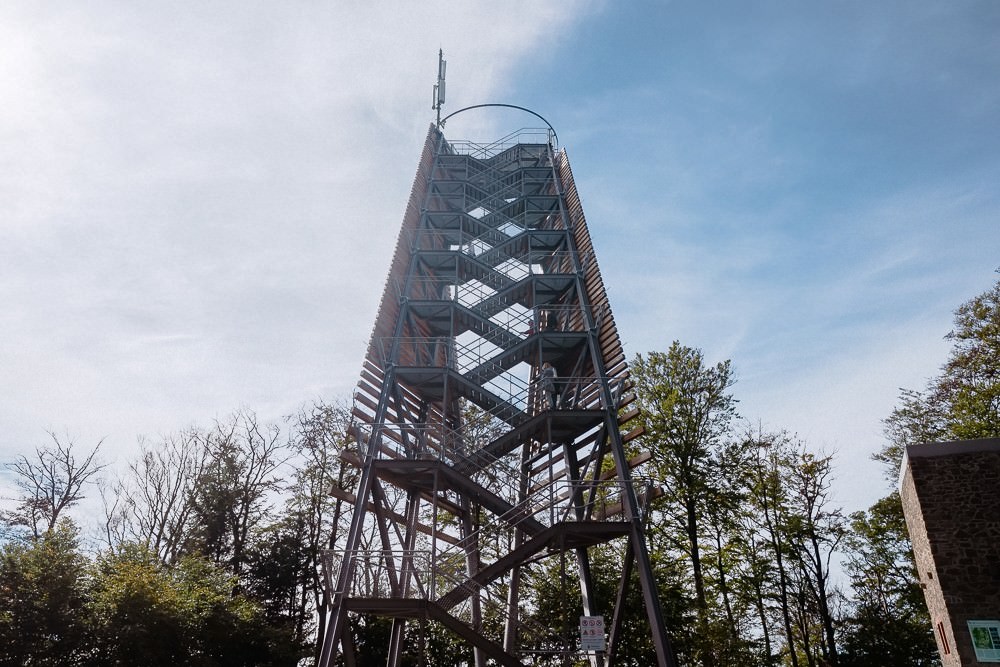 The Trommturm tower is the tallest location of the Geozentrum network. 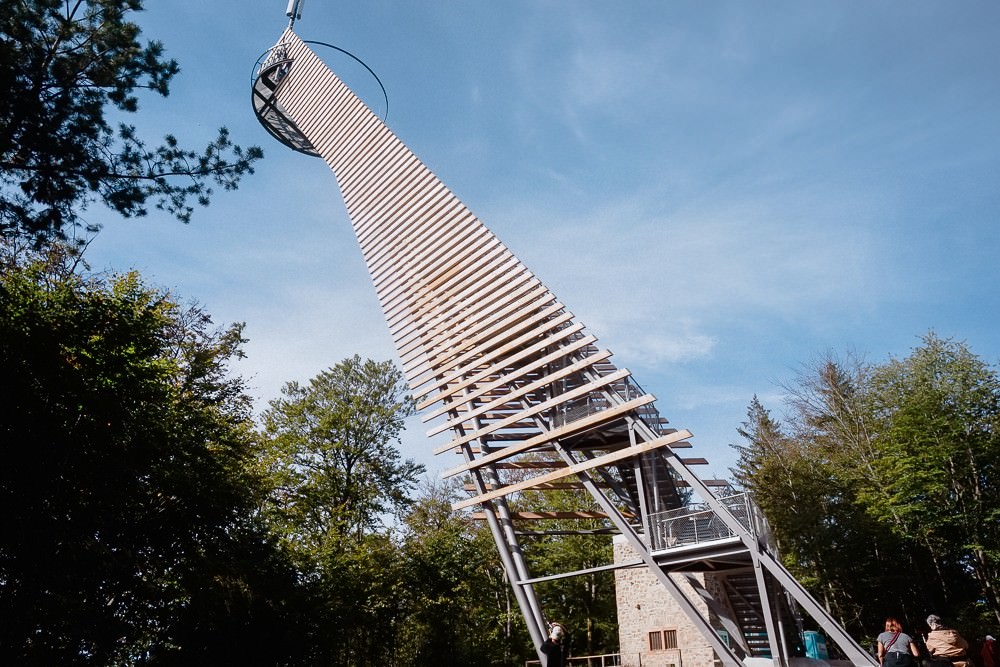 The Ireneturm tower used to be in this place; the base in the back is reminiscent of the old lookout tower. 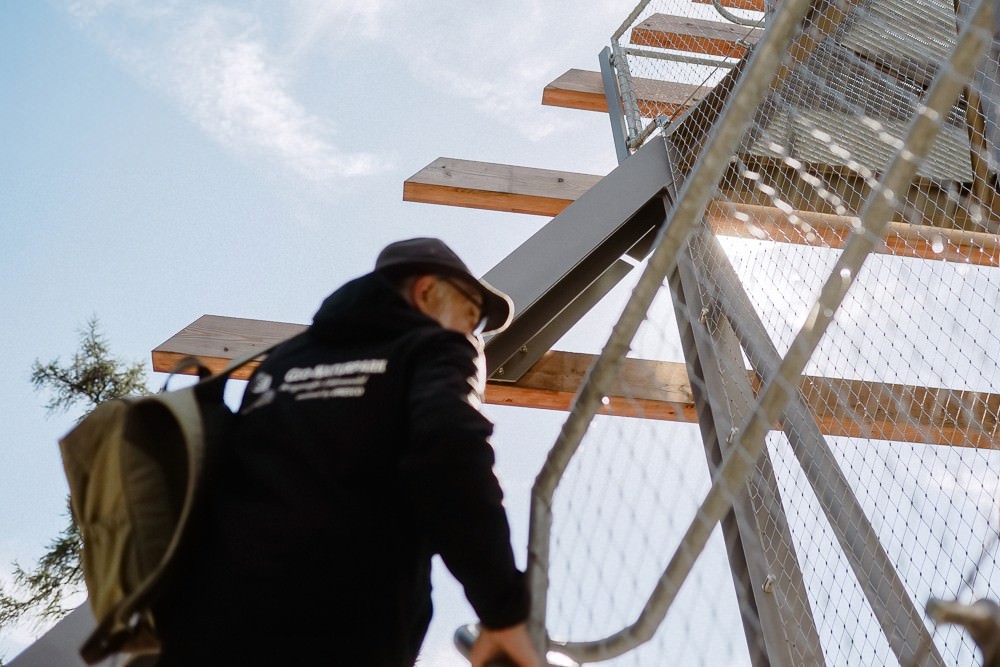 Climbing up the 192 steps requires stamina… 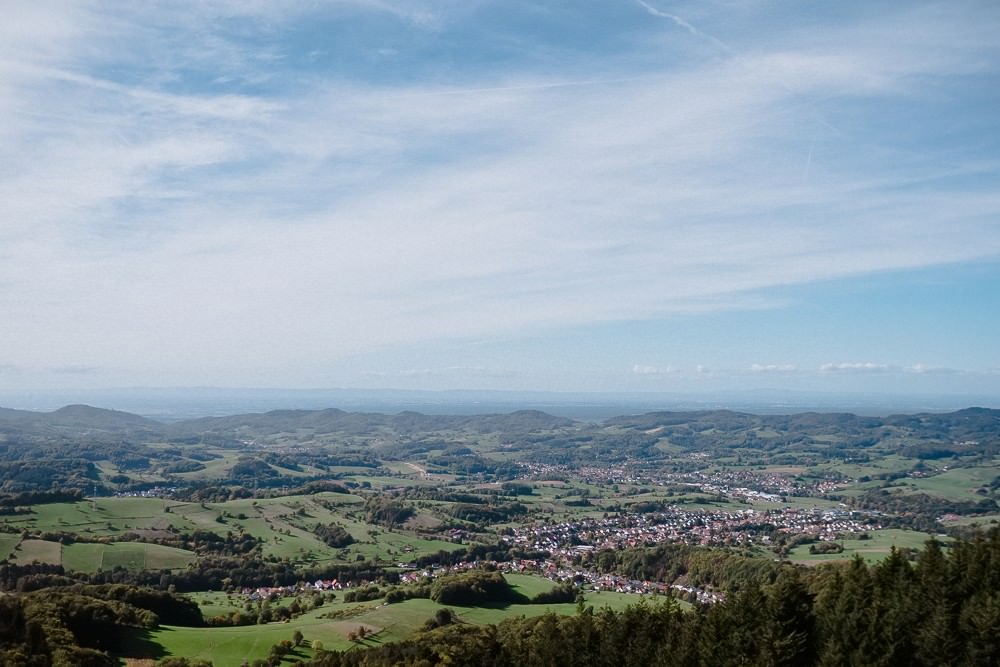 ...but you are rewarded with a magnificent view. 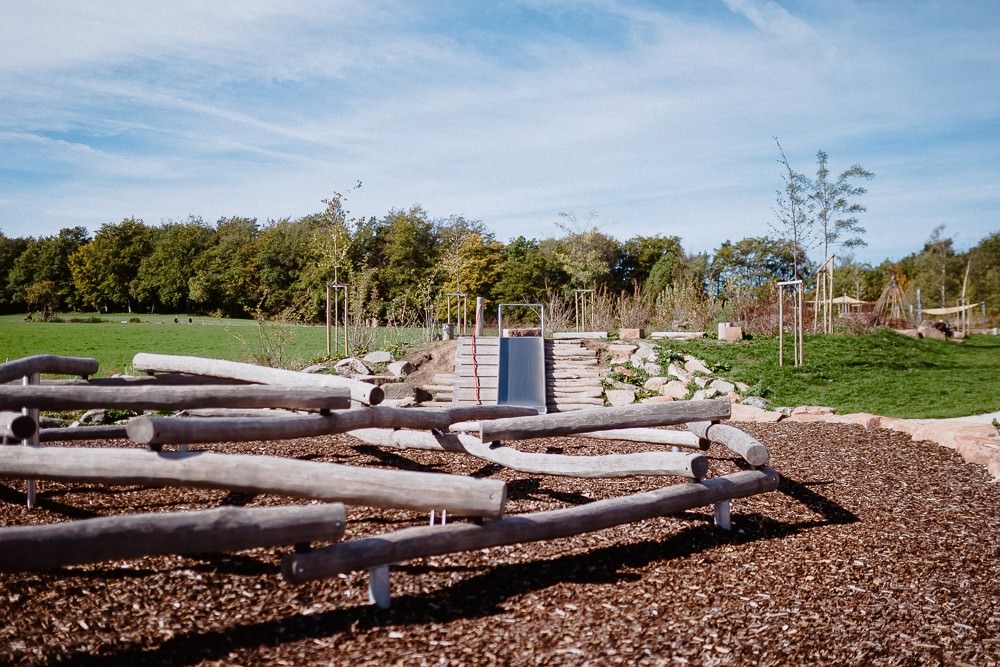 A hiking trail winds its way from the tromMotion natural playground up the Tromm mountain. 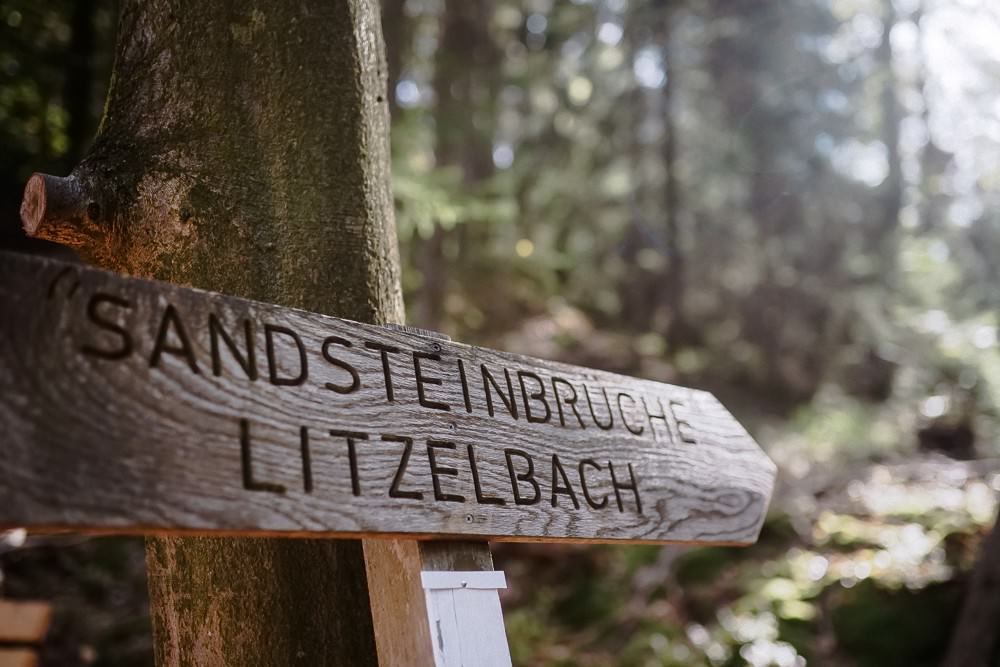 The sandstone quarries near Litzelbach are part of the Geozentrum network, too. 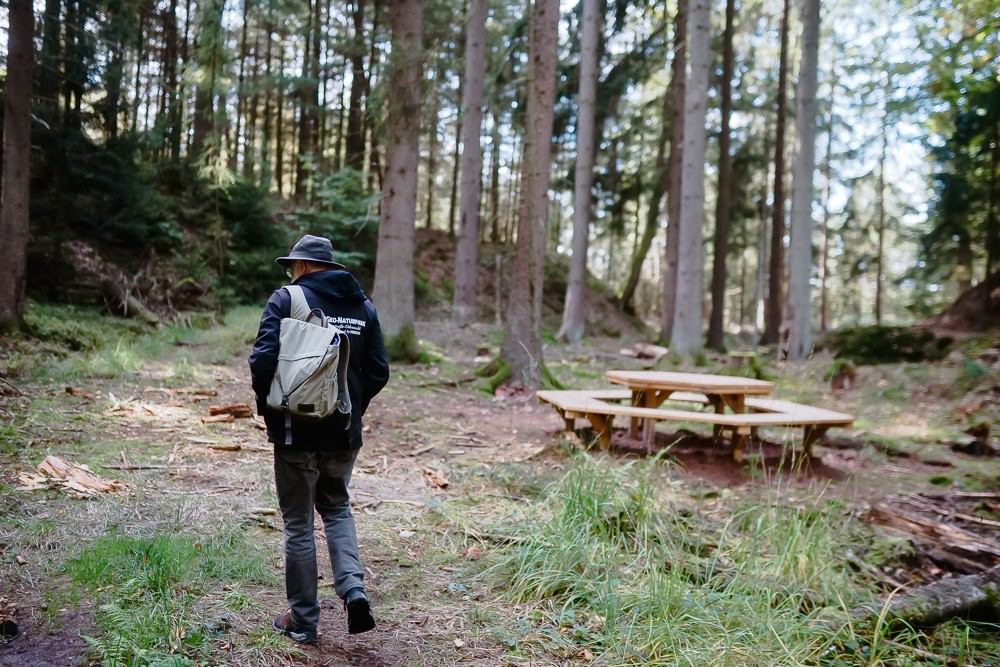 Sites for recreation and playing are being created throughout the area. 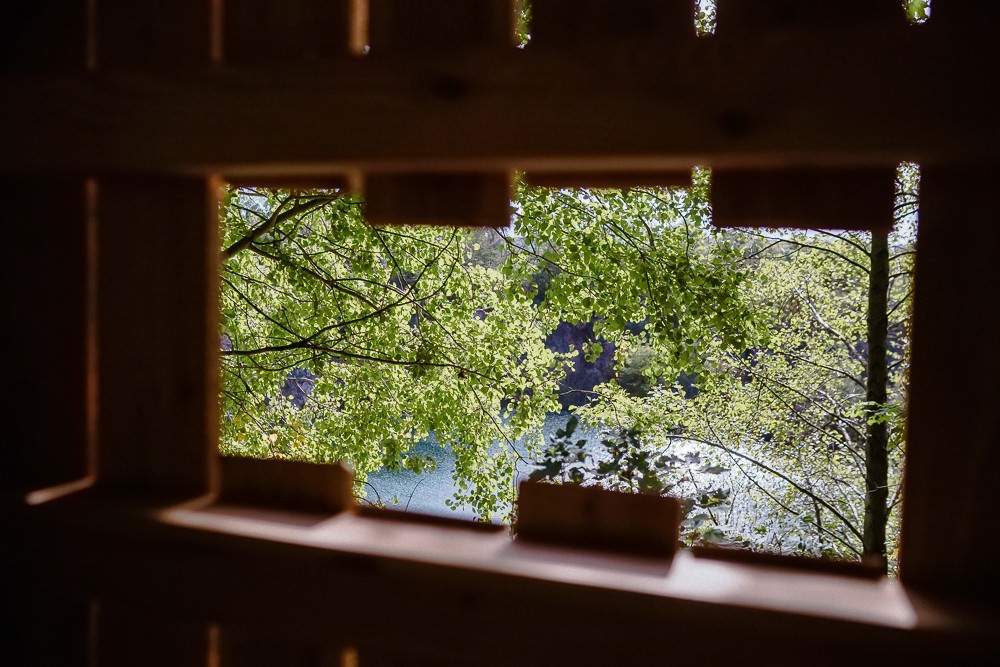 The quarry near Mengelbach offers another beautiful view.

And they tell stories about the local geological history as well as about the cultivated land shaped by it. They also tell stories about the people who used to live here and about their everyday lives. The Überwald communities of Grasellenbach, Wald-Michelbach and Rimbach in the Weschnitztal valley have joined forces and established the Geozentrum Tromm network in order to better explain and make tangible the interplay between geology, wildlife and culture.

If we have a treasure here in the Odenwald, it’s our great wildlife.

The federal government funded the Geozentrum network as a national urban development project. The municipalities received some 2.5 million euro. Theo grins a little when he recounts this. “Urban development… Well, our mayors are resourceful when it comes to finding funding opportunities,” he laughs. Markus Röth is one of these resourceful mayors. The head of the municipality of Grasellenbach was the driving force behind the application for the project and just thought “let’s give it a try,” because the funding was a promising opportunity for the municipalities. “We can improve our resident’s quality of life and attract new guests at the same time.” The project strengthens rural areas, supporting sustainable, nature-based tourism.

Sebastian Schröder draws together the threads of the project. He is the managing director of the Zukunftsoffensive Überwald, a local action-taking initiative for the future. Four locations make up the Geozentrum Tromm network: the natural playground in Grasellenbach, from which a hiking trail winds its way up the mountain to the Trommturm, the tower located in the Rimbach district; the quarries in Litzelbach and the quarry in Ober-Mengelbach. New cycling and hiking trails connect the locations, telling the story of how the geology of the Überwald has shaped local history.

Having descended 192 steps and arriving at the Wiesental Geopark Information Centre, Theo gives an overview of this history. “The Überwald used to be the poorest area of the Odenwald in the 18th and 19th centuries,” the guide tells us. There were not many opportunities to find work here. “Those who inherited their parents’ small farm were lucky. The siblings of the first-born children, however, often had no other choice than working in the quarries.” And there were plenty of them at the time. There were 28 commercial quarries from which mainly sandstone was extracted. “In addition, there were numerous small privately-owned quarries.” Sandstone façades still characterise many Überwald communities today. Moreover, the sandstone was transported by the tonne to the growing industrial city of Mannheim—first by horse carriage, and then later by the Überwaldbahn railway, whose rails are now used by the solar-powered rail trolleys.

The work in the quarries was very hard. The young men who had to toil there did not grow old. “It was a respectable age if they reached their 40s,” Theo explains. Many fell ill with tuberculosis or black lung. At the quarry in Ober-Mengelbach, oversize pictures provide insights into the everyday life of the workers. Gneiss, a granite-like rock, was extracted from this quarry until 2007. In our days, nature has begun to take over again. Little by little, the quarry is filling up with rainwater. The lake is already over 20 metres deep. Perch and pike swim in it. The steep rock faces are like paradise for wild bees. And an eagle-owl breeds at the edge of the forest every year. Theo stands in the shelter at the upper edge of the quarry. From here, visitors can observe the wild birds and soon also listen to their voices by pressing a button. Theo lets his gaze wander. “I find it reassuring to see how quickly nature can reclaim such industrial sites.”

He was raised in Wald-Michelbach. After he had finished school, he moved away to Nuremberg and Cairo—and came back home again. “You get a different perspective of your homeland and gain a new connection to it when you’ve been away for a long time,” he says. Theo has become a committed member of the local museum and culture club, walks a lot in the forest with his dog and is very familiar with the wildlife in his homeland.

When the electronics technician had to retire at the age of 57 for health reasons, the Geo-Naturepark Bergstrasse-Odenwald authorities asked if he would like to train as a Geopark on-site guide. Theo agreed. So today he not only walks around the forest with his dog, but also with hikers and school groups. He accompanies bus tours through the Odenwald, gives night watchman tours in Wald-Michelbach and Hammelbach and actually thinks: “I should have done all this much earlier!”

The four quarries in Litzenbach also demonstrate how quickly nature lets the dust, or in this case moss, settle on human intervention. Yet, the forest here would actually look quite different without this former intervention. “All the hills here are mining waste dumps,” Theo explains. They form a hilly forest landscape with small clearings and large ditches. Small and large playgrounds are currently being built all over the extensive area, with suspension bridges, slides, swings, benches, educational stations and discovery stations. They make an ideal location to embark on forest adventures.

The Geozentrum Tromm network is designed to attract families in particular and also has a lot to offer to anyone with little interest in geology and history. At the same time, everyone else has the opportunity to delve deeper into the subject. But above all, the project shows one thing, Theo thinks: “If we have a treasure here in the Odenwald, it’s our great wildlife.” 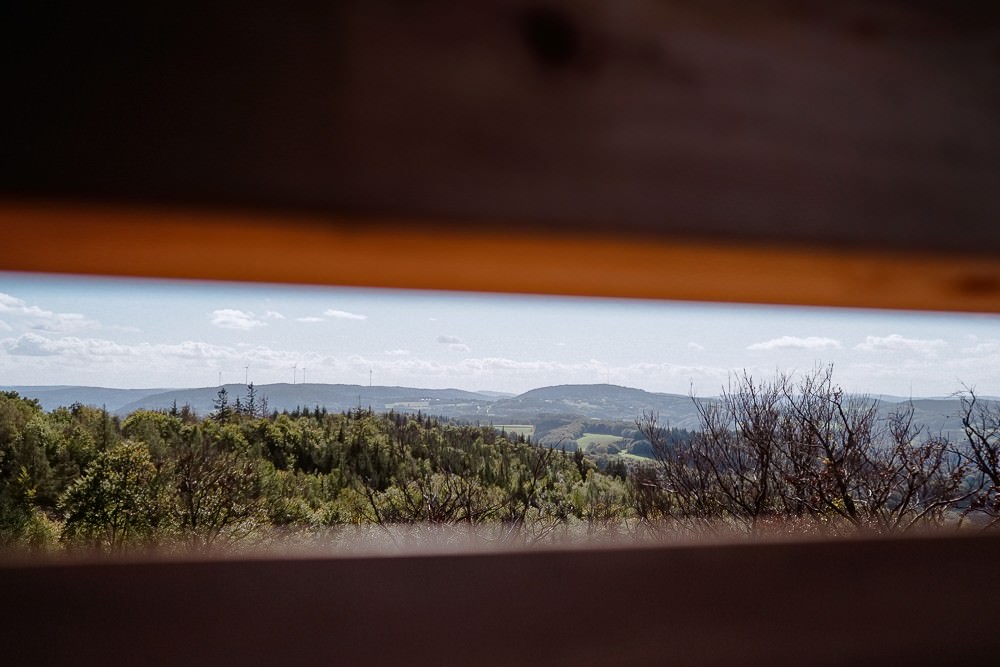 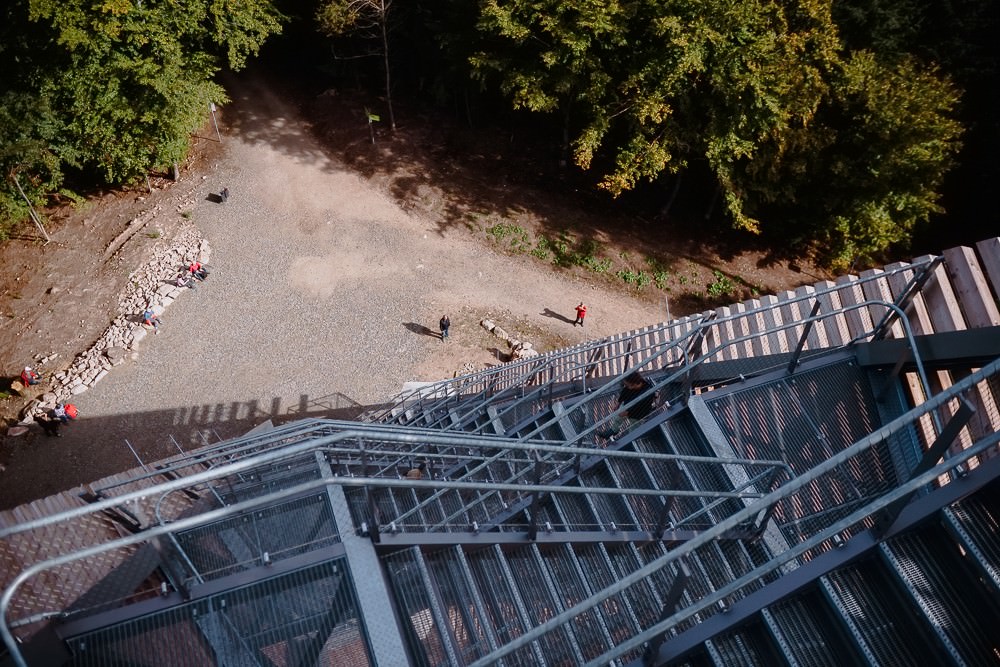 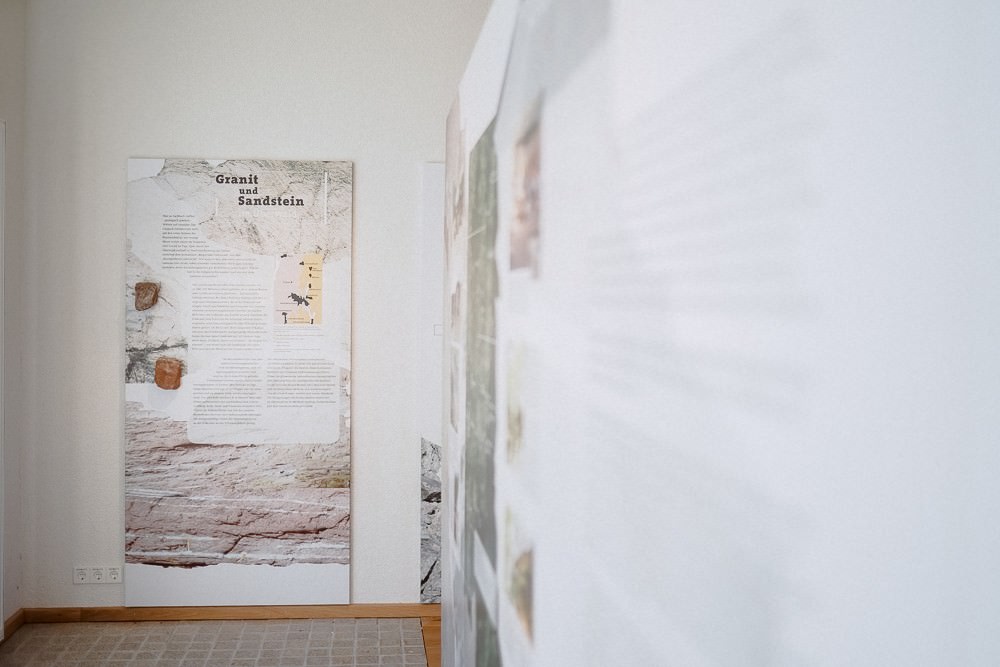 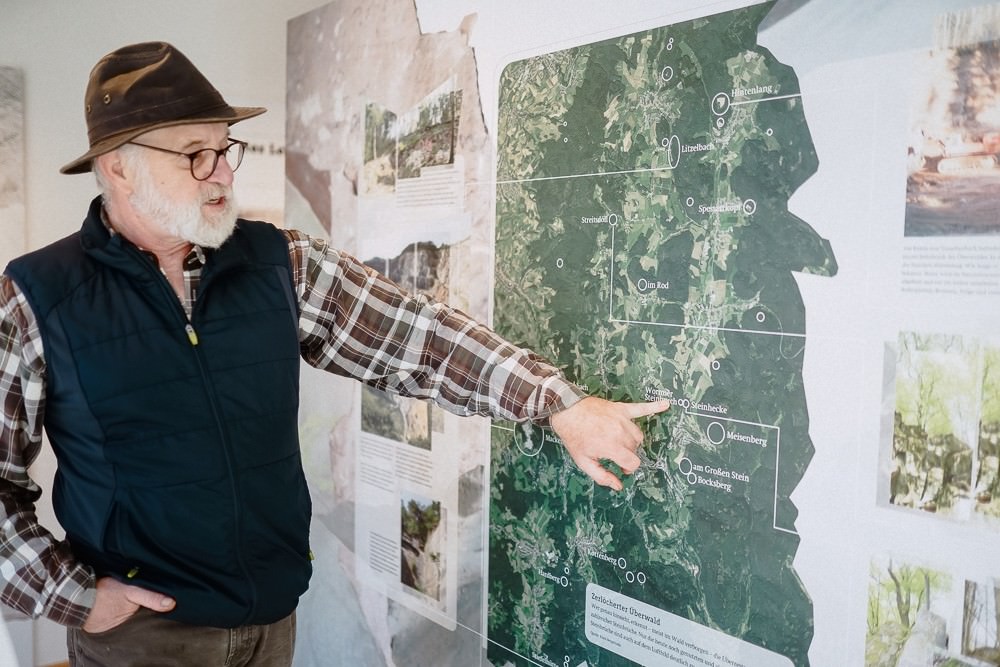 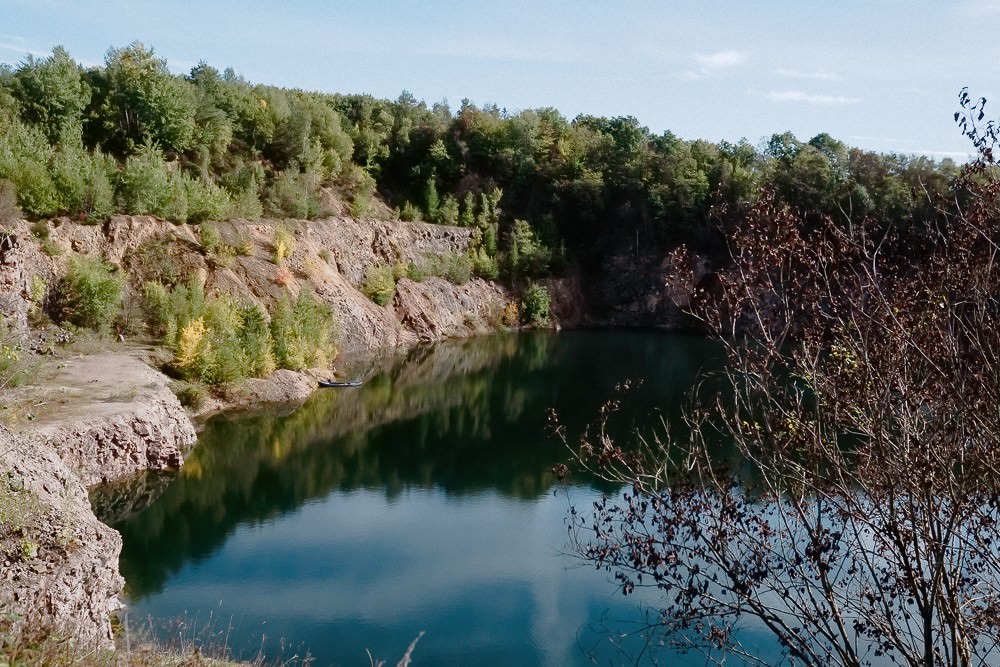 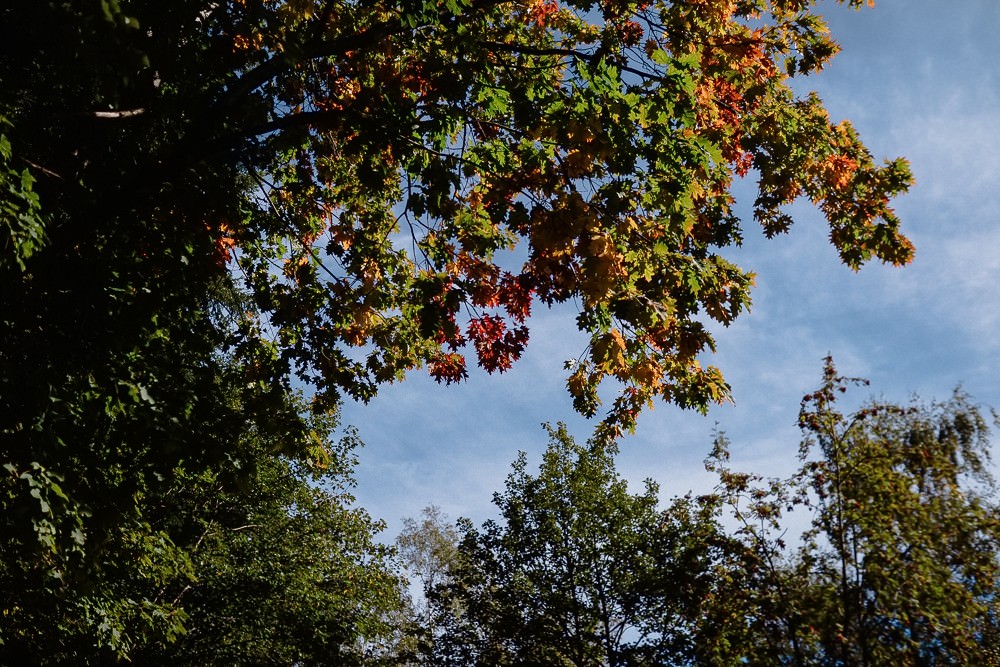 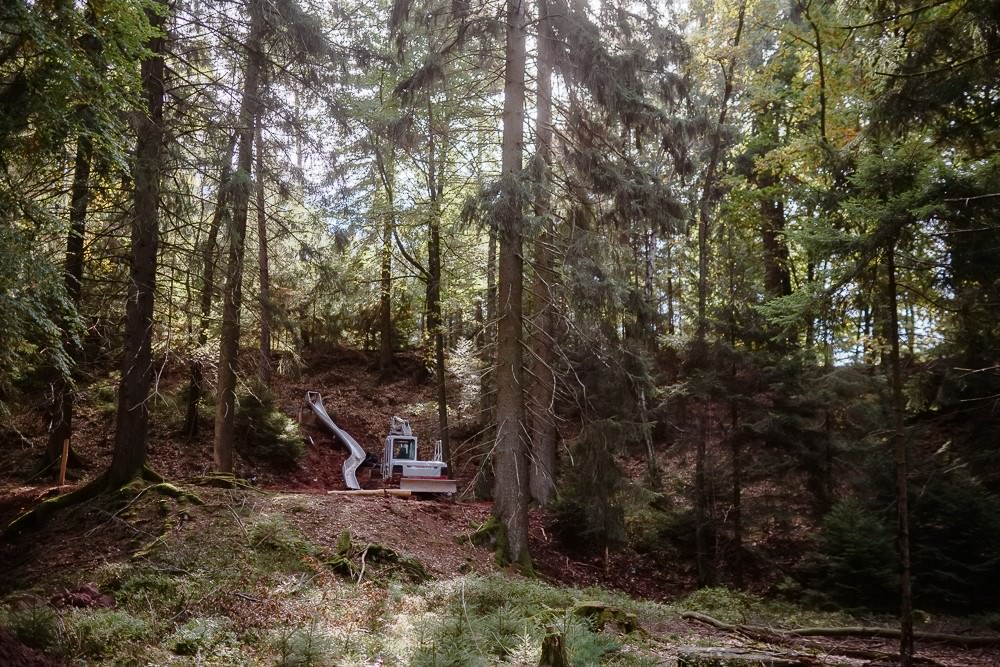 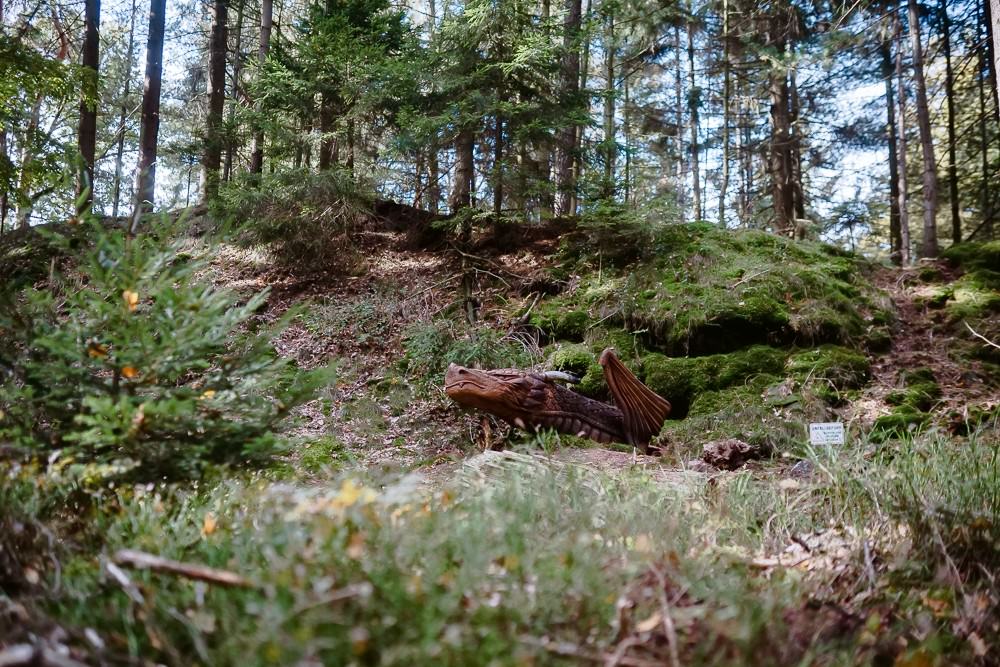 Weitere Artikel zum Thema Off to the Odenwald!

Back to the future

Hans-Georg and Johannes Vleugels run one of Germany’s biggest pipe organ manufacturing companies in the Odenwald.