Elevating up to happiness

Amidst unspoiled nature you suddenly run into a car ascending into the hills, a lift waiting for passengers and two street lamps flirting with each other. The Skulpturenradweg (sculpture cycle track) in the Bauland and the Odenwald regions literally makes art tangible along 77 kilometres of cycle path.

Standing proudly in the landscape, as if it has always belonged there and only waited for somebody to push the button and open the doors—for a trip down into the unknown. “Where to? This is the question,” says Ekkehard Brand, one of the sources of inspiration for the sculpture cycle path, standing at the lift next to his mirror image on the dull metal. Ekkehard is indeed the one, who is to blame for this lift amidst unspoiled landscape of the Bauland region. “It is unreal and absurd,” he thinks. Here, people can use their imagination—“art does not intend to be aesthetical all the time, but to spark inspiration.”

Ekkehard Brand is the former mayor of Seckach and one of the sources of inspiration for the Skulpturenradweg cycle track.

‘Underground’ is the name of the piece of art located between Adelsheim and Sennfeld at the 77-kilometre Skulpturenradweg. This “extremely technical object” was placed here by the Dossenheim artist Markus Gehrig “into this beautiful landscape to create a counterpoint.” 44 year-old Markus tells us that some people grumbled about it. “They were…,” he stops, “not quite outraged, but somewhat annoyed.” And this is what his art intends to do: make the observer take exception to it and hence, provoke something in them.

The cycle track offers 25 stations along the towns and municipalities of Adelsheim, Buchen, Ravenstein, Rosenberg, Osterburken and Seckach. 18 sculptures have stood on the side of the path since 2005, another 7 were added in 2019. The participating municipalities staged two competitions involving the art colleges in Karlsruhe and Stuttgart among others. 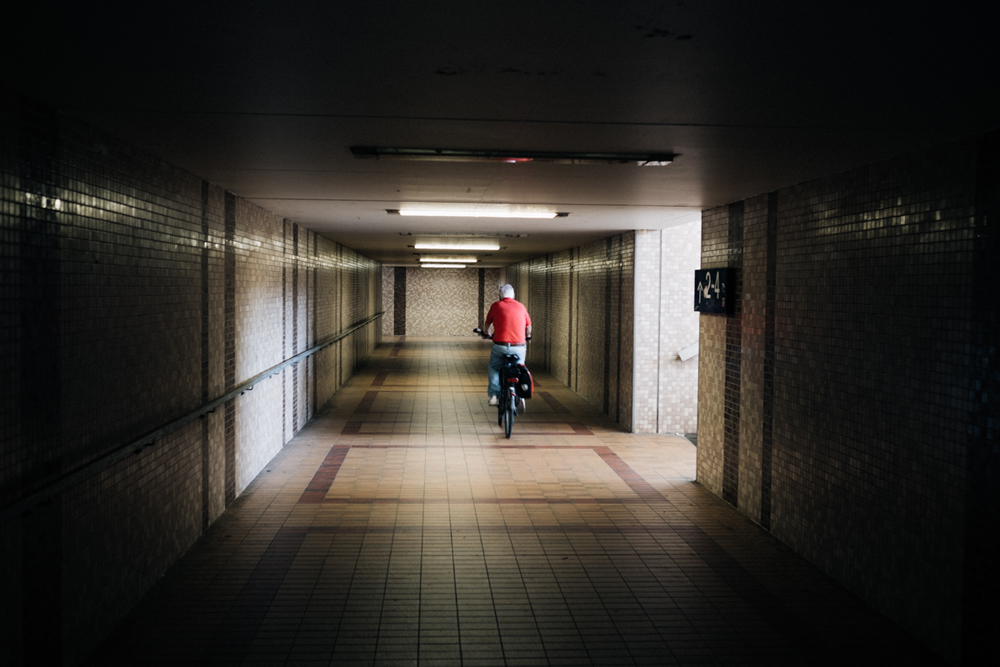 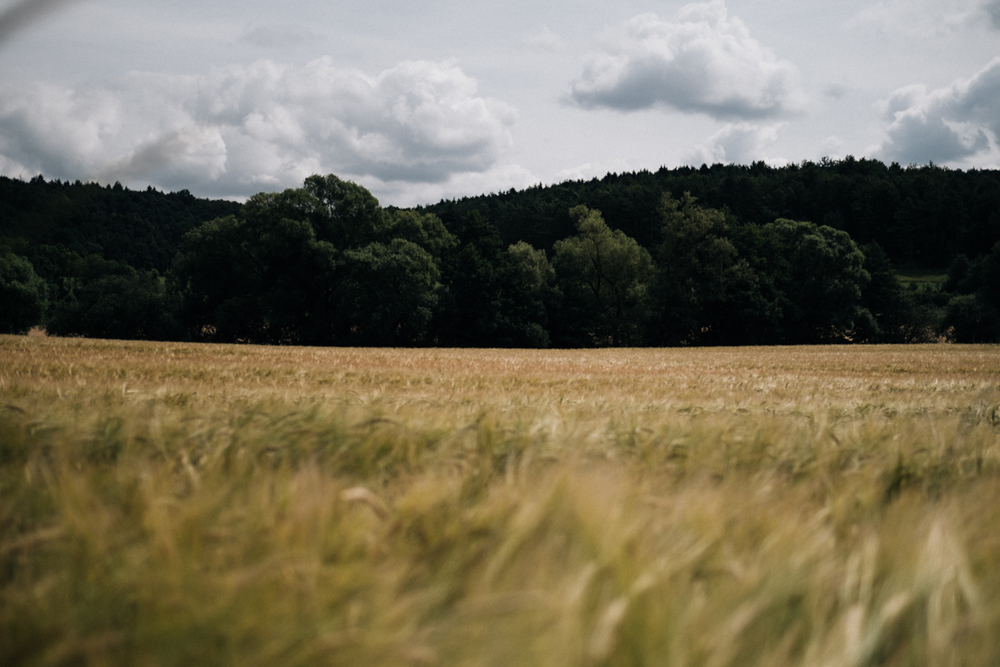 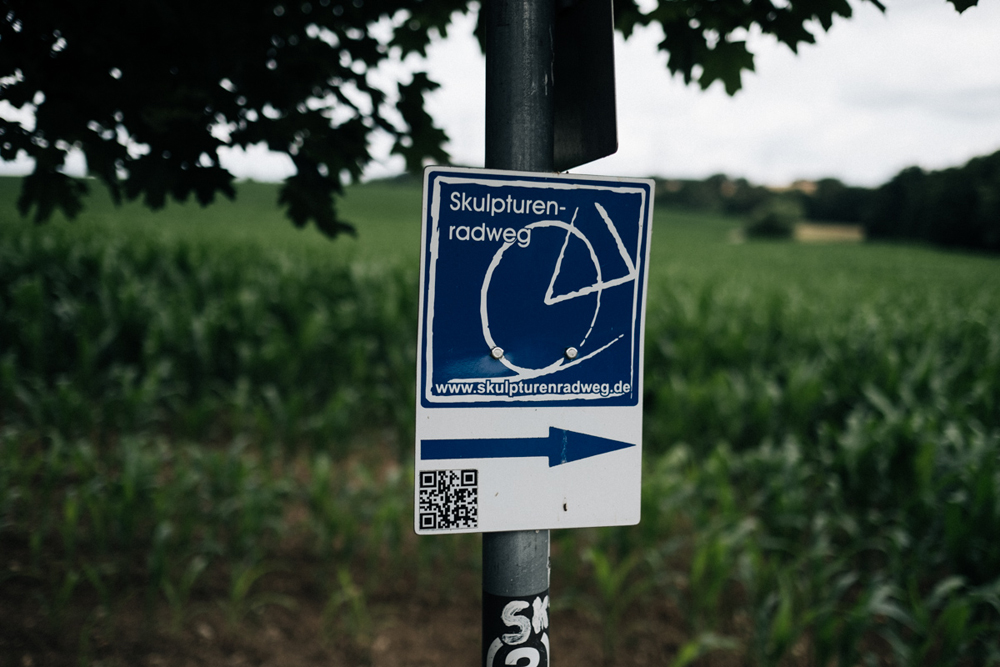 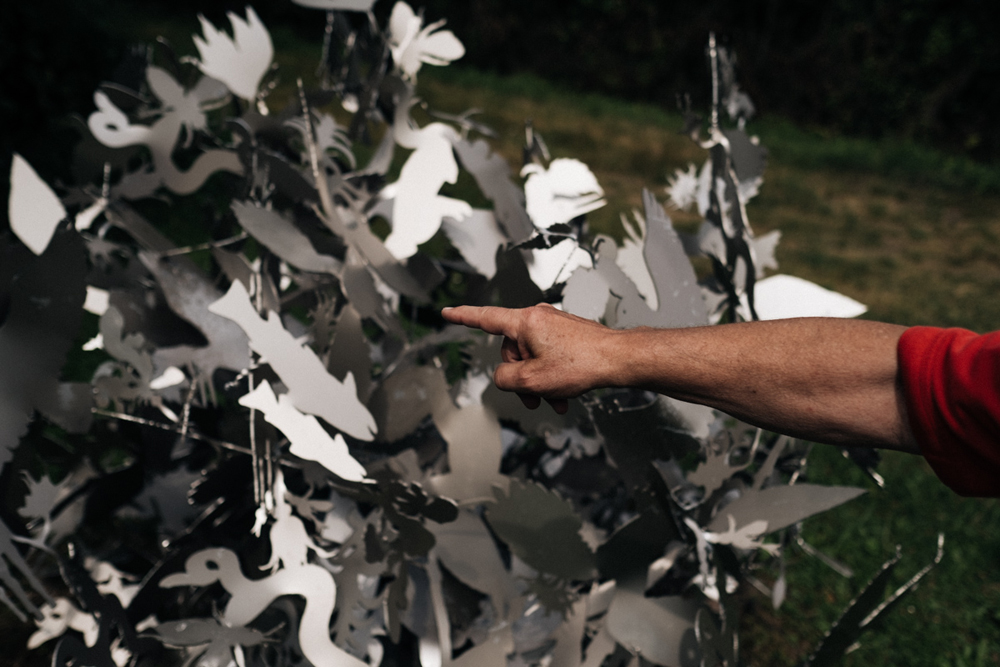 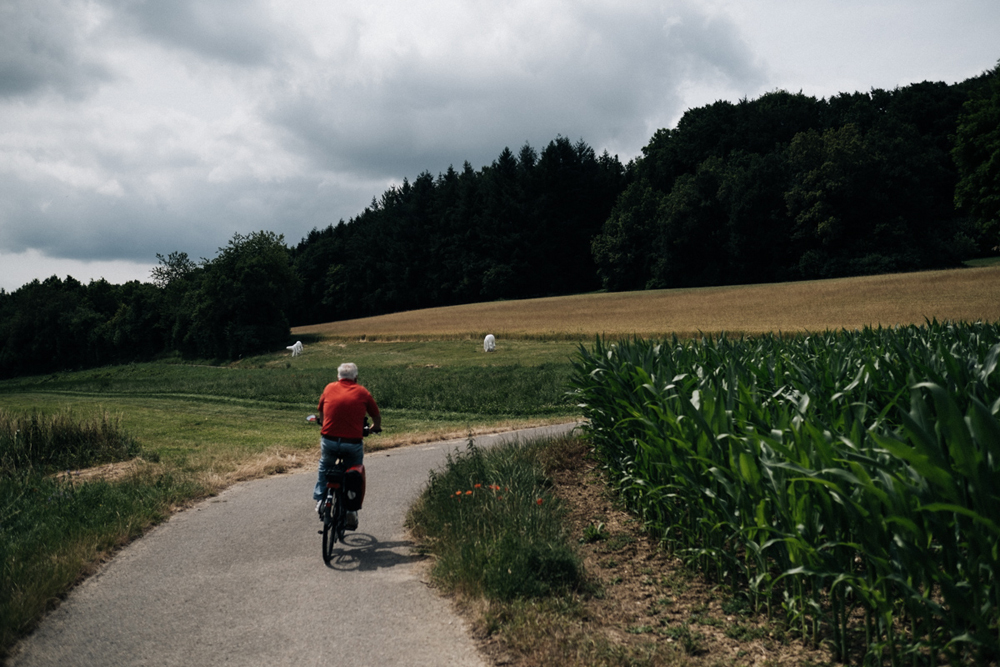 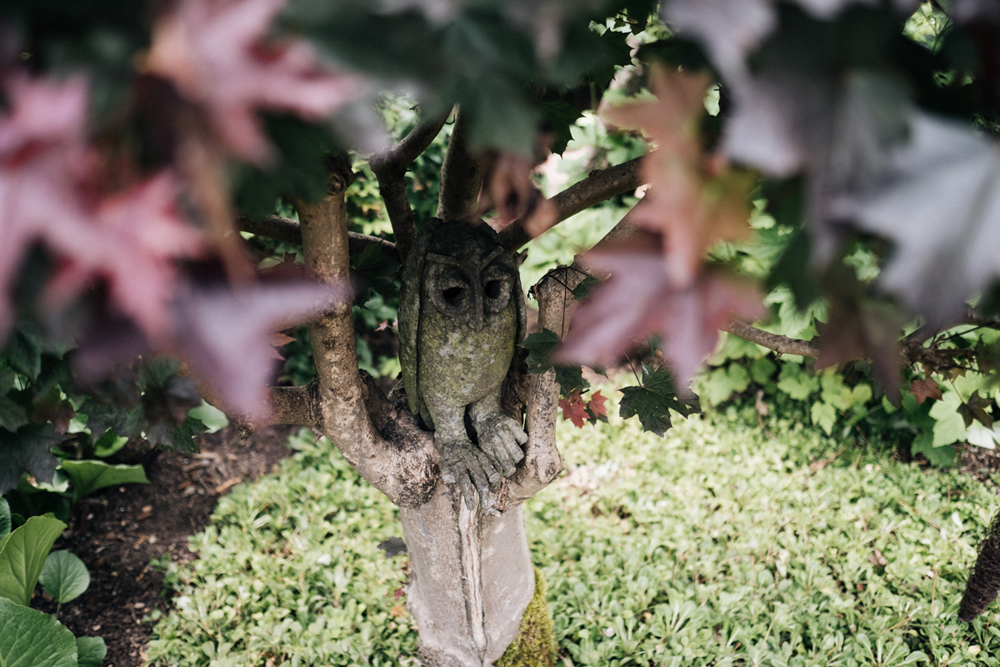 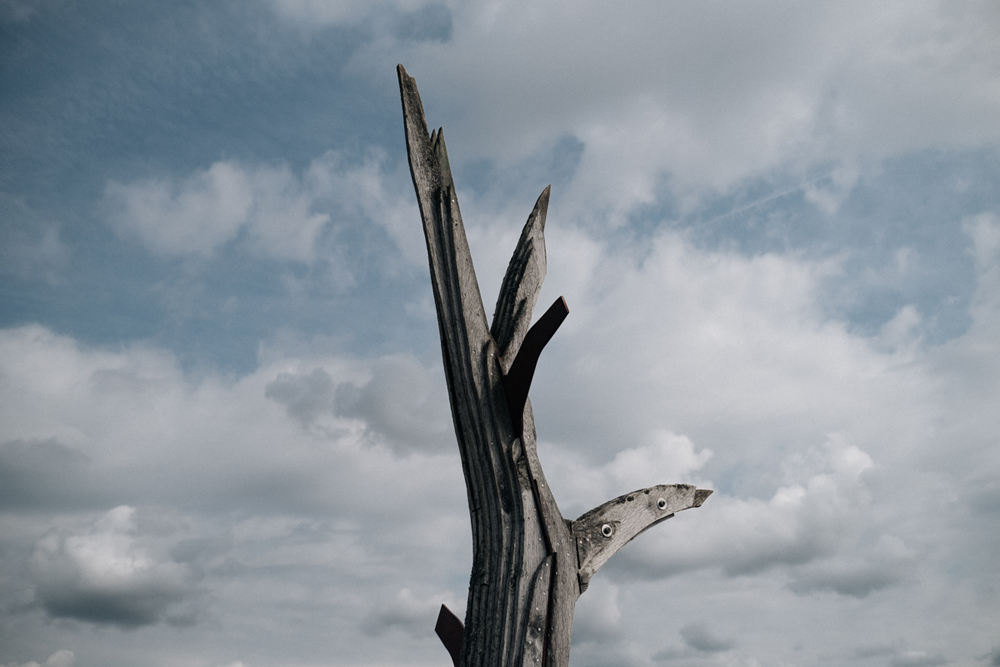 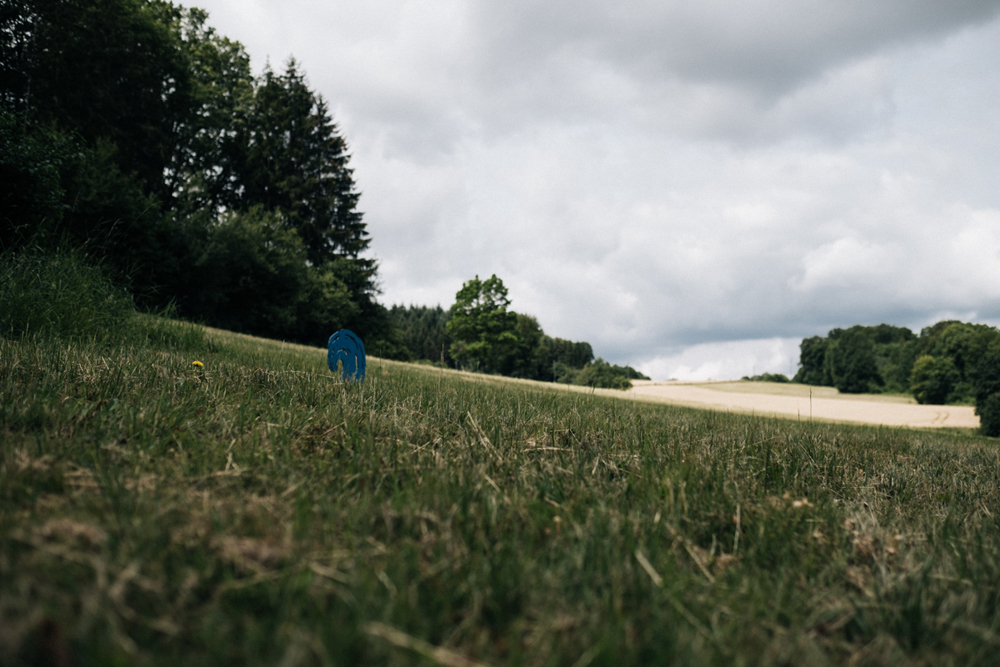 Ekkehard pedals hard. The 73 year-old, wearing a red polo shirt and white retro trainers, would be sporty enough to make the journey along the hilly path easily without electric drive. The track is feasible with “usual” bicycles, but easier with e-bikes if you want to talk and not lose your breath. And there is a lot to tell! Ekkehard manages the project in an honorary capacity. The mayor of Seckach retired in 2002. But not really. His colleagues in the neighbouring municipalities knew: “It was you who invented the Skulpturenradweg—now put it into practice!” Ekkehard starts to laugh. “True, I have time for such a project because of my retirement.”

He knows that art means debate—in the true sense of the word. There were and are critics and even opponents—people, who are unsympathetic to the fact that money flows into art right into the corners of the forests, whereas it is missing for voluntary fire brigades or nursery schools. “I understand the excitement,” he says. But the project is not just about infrastructure or road construction. The idea is to enhance and contribute to everyday life using art as a means.

Pieces of art—such as the sea between Zimmern and Seckach, brought to the Bauland region by sculptor Nina Laaf. Waves made of blue-painted steel tower on both sides of the track. Ekkehard floats from one wave to the next—listening to the sound of the crickets instead of that of the breakers. Behind Zimmern, seven curved steel bodies appear from nowhere in the undergrowth. Three on the slope on one side of the path, four on the other: ‘Wechselwild’ (‘crossing animals’) by Ilka Berndt.

Art has the ability not only to divide but also to bring people together. Ekkehard goes into raptures about the support for the sculptors from the locals: local companies supplied them with material; natives invited them for dinner; and the vernacular call the big, white mythical creatures with the large number of legs ‘the polar bear’. The work by Elisabeth Howey is called ‘Glück unterwegs auf der Suche nach’ (‘happiness searching for’). Ekkehard touches one of the ‘polar bears’ tenderly. He likes them and how vivid they are; and that children climb on them sometimes. For him, this interaction beyond fear of contact and the freedom of interpretation is what makes art in public locations special. “They may be creatures of dreams,” the stone sculptor writes about her work. “But they may also be read as a critical comment on our genetically manipulated environment.”

A number of the artists respond with abstract pieces to the concrete places. They integrate the environment, or infringe it deliberately. A massive, three metre-high diving platform created by sculptor Johannes Wald, towers at the dyke between Rosenberg and Osterburken. The scene causes uneasiness, because there is no pool—unless the observer’s fantasy imagines one. Along the track between Bronnacker and Rosenberg you find an Opel Manta, its body extended by 18 metres—a symbol of the manta ray that is steeped in legend. The roll-flattened car is a work by Stefan Rohrer. The observer may well interpret it as a warning sign—a symbol of short moments of danger in the sea of traffic. Artist Rudolf Reiber reminds of human destruction of nature through human construction and buildings: He put up scaffolding as big as a family house between Hopfengarten and Merchingen—a building far away from any developed site.

Ekkehard’s last destination for today is the ‘Subterran’. Artist Jochen Damian Fischer had a six-metre tunnel dug. The tunnel leads the visitor via stairs through a tube coated with corrugated iron into the heart of a cylinder. Seven metres high. Above it only sky. “The echo and the view! The clouds play with each other”—Ekkehard begins to sing the ‘Ode to Joy’ theme uninhibitedly and accurately.

The Skulpturenradweg cycle track is not the work of one person, but real teamwork: Wolfgang Mackert, who is in charge of tourism, cultural affairs and urban development in Buchen, talking to Ekkehard Brand.

Even Wolfgang Mackert crawled through the tunnel. Ekkehard invited him here, because he wants the project to include all locals and not only himself: Wolfgang is in charge of tourism, cultural affairs and urban development in Buchen. Two of the art pieces are located on the municipal area of Buchen since 2019. This is a win-win situation: “We can provide notable infrastructure,” Wolfgang explains. The heated forest swimming pool, the Alla-Hopp playground site for children, a climbing hall, an adventure and education trail and especially hotels, guest houses and pubs.

The quality and the diversity of the art pieces make the voluntary manager of the project very proud. On the one hand they are alien elements and out of place. On the other hand they reveal deeper meaning, such as the ‘Paar im Park’ (‘couple in the park’) in Adelsheim—two street lamps next to Kirnau river that stand to close to each other to be normal street lamps. The top of one of them is round, the other one square. At dusk they flirt with each other: in a conversation from Shakespeare’s Romeo and Juliet translated into Morse code. “They can’t approach each other, impossible is a kiss,” sculptor Jan Löchte writes about his piece. Hence, the lamps have stood next to each other for almost 15 years, without ever being with each other.

Markus Gehrig’s lift is a wake-up call, shriller than the two ‘lovers’. When the artist, who is a skilled construction drawer and architect, first visited the site, he was transported back to his childhood and those trips to the Eberstadter Tropfsteinhöhle stalactite cave. This was an inspiration. Markus’ initial idea was a ventilation system. But he thought a crucial detail is missing: “What is the human role in this scenario?” So he constructed the lift, which refers to the invisible that is beyond the perception of the observer. The light coming from inside the booth suggests to the observer a ride into the underground. But there is no display informing him about the destination and the depth—leaves quite some room for speculation. It seems the lift is waiting. Impatiently. To carry the next passenger. 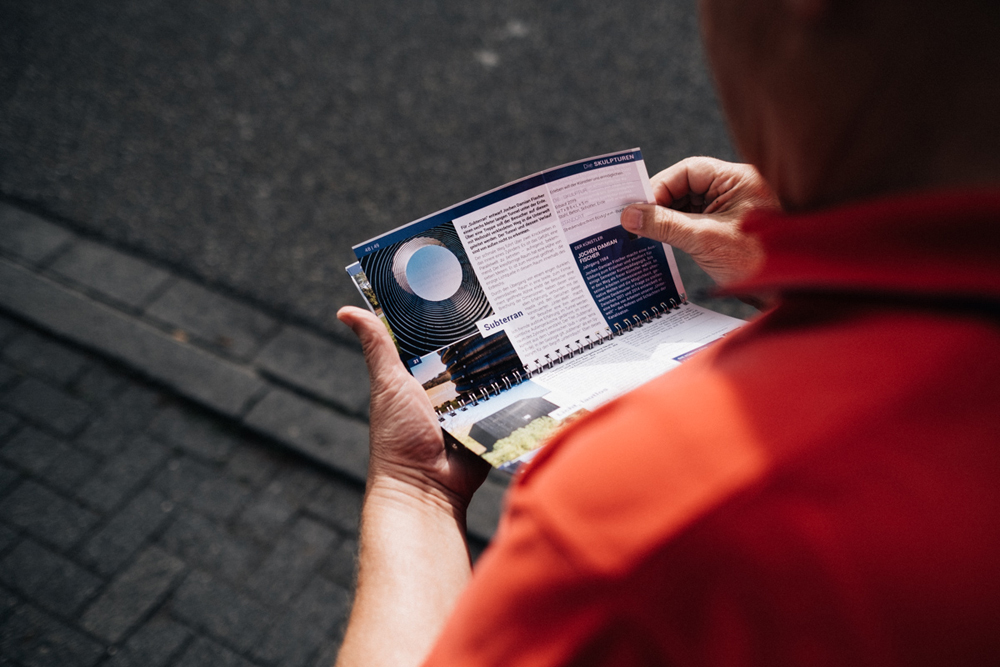 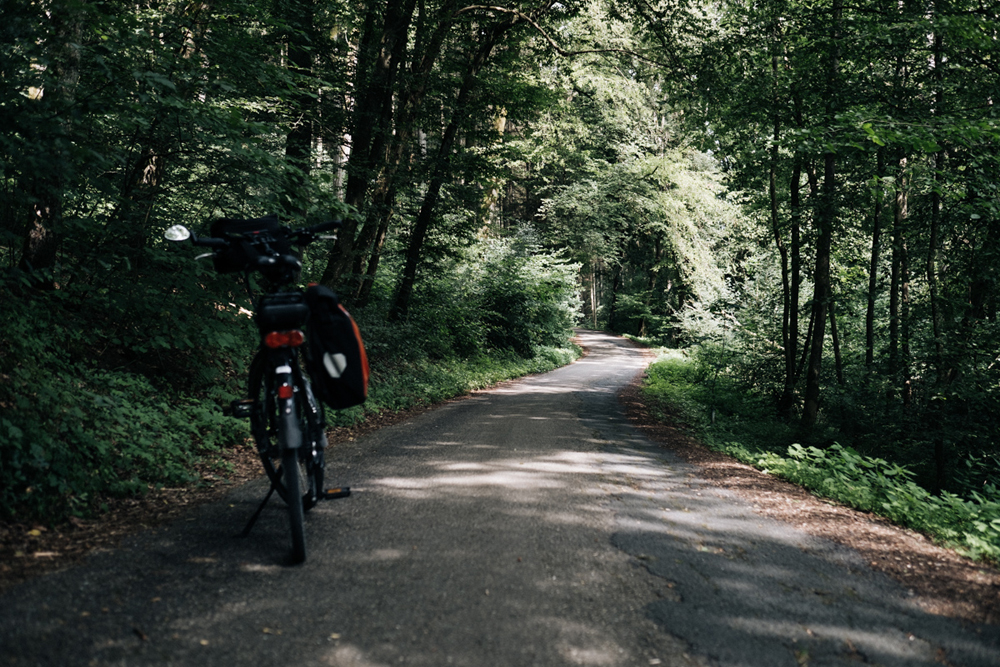 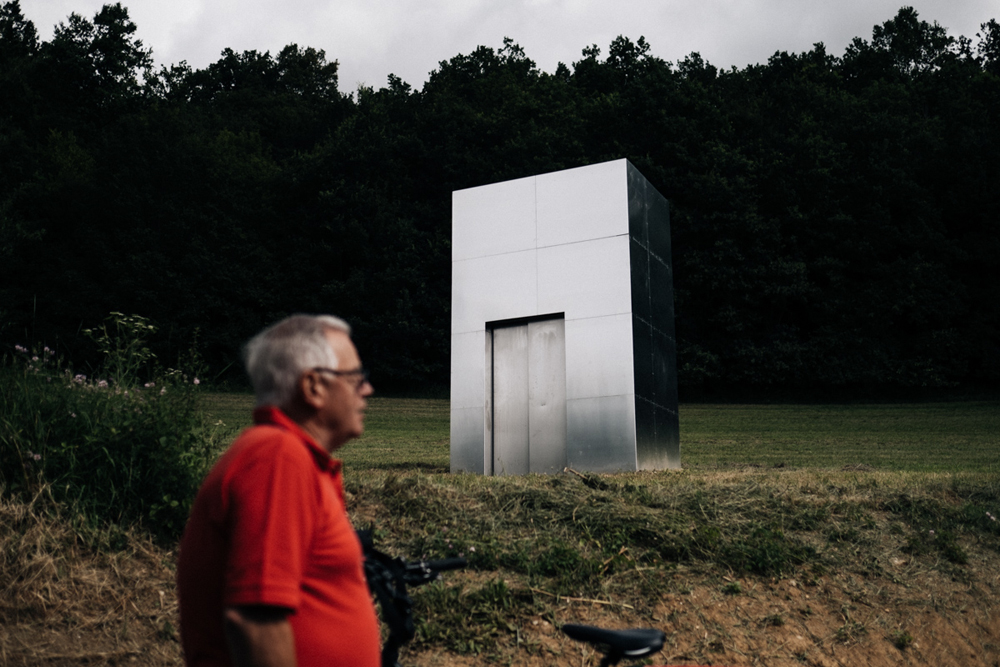 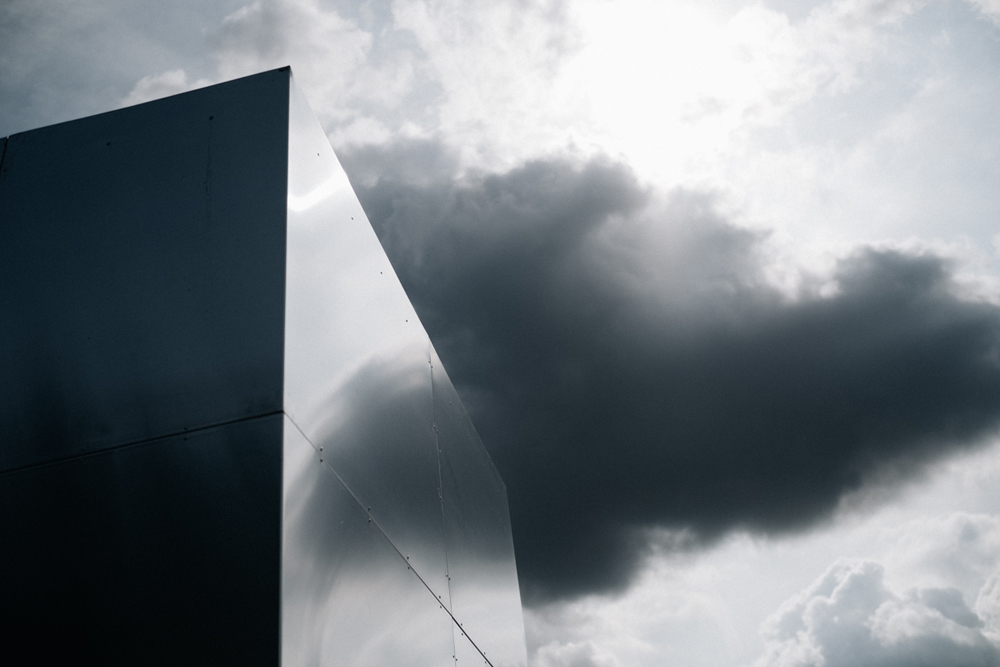 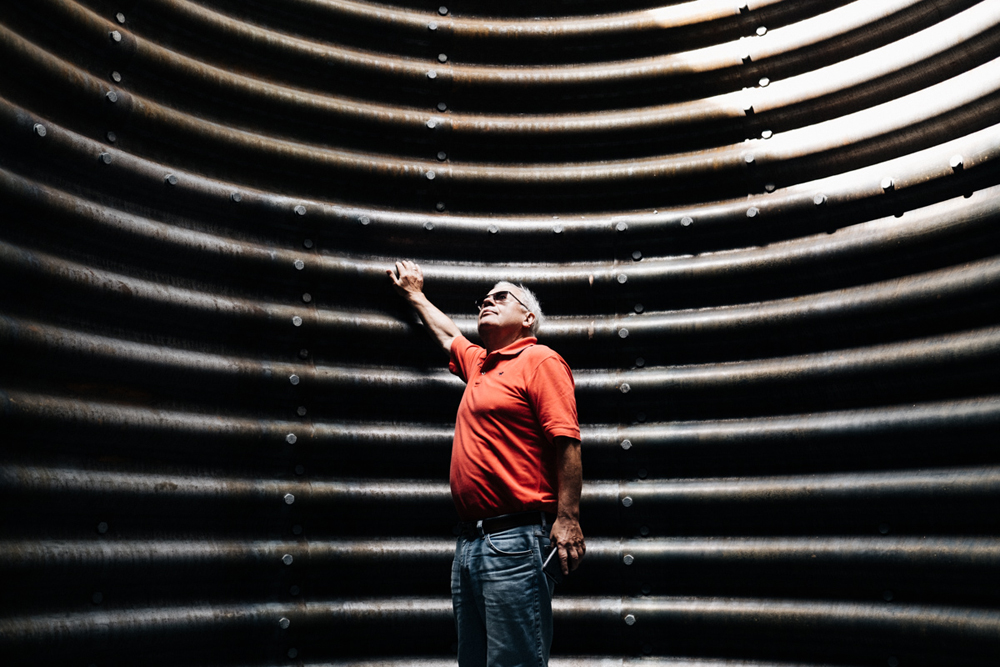 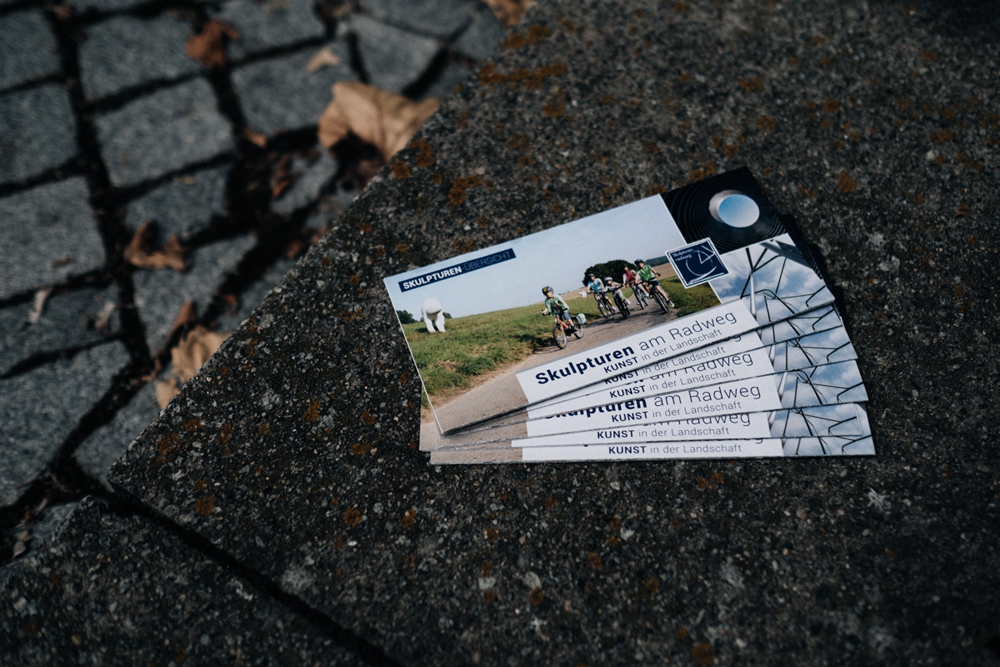 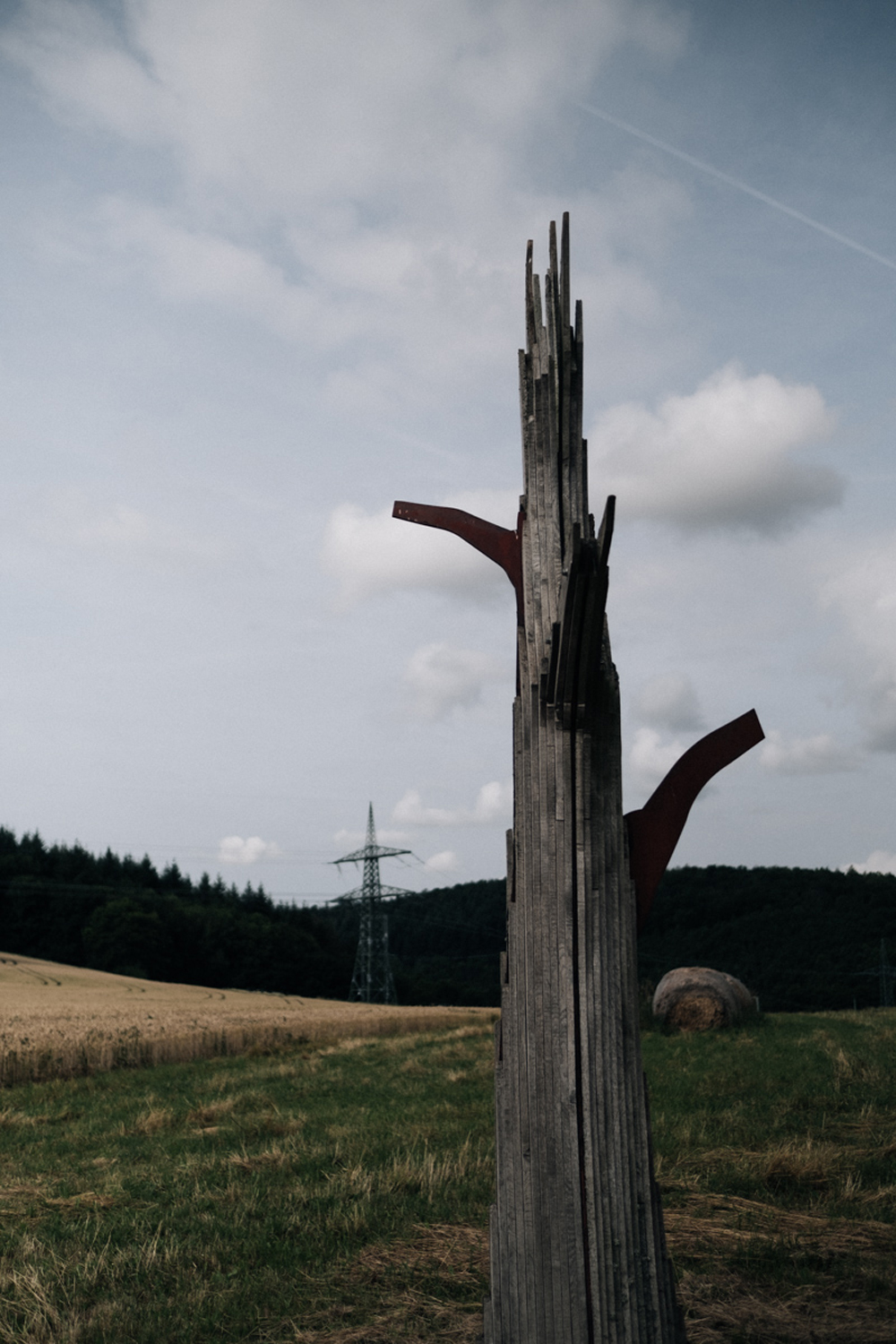 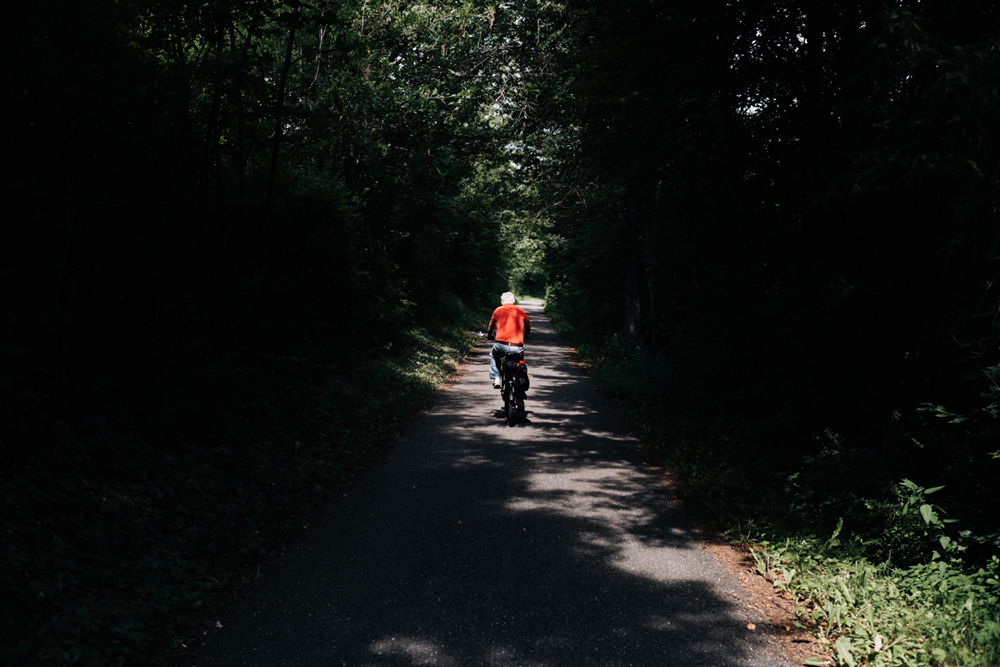