True treasures adorn the Staufian monastery church in Lobenfeld, Germany in the Rhine-Neckar district: Wall paintings from bygone days are partially preserved, but not yet thoroughly researched. Almost 90 years old, Doris Ebert still works tirelessly to bring some well-deserved attention to these works of art.

The artworks decorating the cold church walls are pale. Merely a few low hanging lamps shed a warm light on the paintings. Fragments of colour command patience, knowledge and imagination. Scarcely recognizable outlines of a man and two lions: Daniel in the Lion’s Den. Beneath it, the paintings of twelve individuals. The Twelve Apostles? Doris Ebert shakes her head no. The wise woman with her neatly combed back white hair has known better for a long time. Looking closer at the southern wall of the choir room in Lobenfeld’s monastery church and at the mural paintings stemming from around 1230, one recognizes figures of women among the people depicted—and the portrait of a crowned man holding a scepter, an emperor or a king. In front of him, however, the saints stand in a row. “It reads like a warning from the turbulent times of contemporary history and church politics: ‘First the church, then the king.’ In a nunnery!,” says the 89-year-old.

The Lobenfeld monastery church, a massive Staufian structure, raises up atop a small hill right where the Königstuhl, Kraichgau and Odenwald mountains meet. It is a place of many mysteries. So many that they may even cause despair.

In the 70s, Ebert moved from Heidelberg to Lobenfeld with her husband and their three daughters. Ever since, the monastery church has been a source of constant fascination. A technical translator by trade, Ebert has had an active interest in murals since her childhood thanks in large part to her mother, who made a living as an artist.

Despite a lack of early sources, the Lobenfeld monastery church must have been built before 1145. Augustinian Canons from Frankenthal founded it, perhaps for the women of their community. Around the year 1270, Lobenfeld was a spiritual home to the women of the Cirstercian Order—and from 1436 onwards to the women of the Benedictine-Bursfeldian convention. There are many more chapters to the turbulent past, including Jesuits and English Seventh Day Baptists who came to Lobenfeld. During the Palatine schism, the monastery church fell in the hands of the Protestants; the remaining possessions were given to the Catholics. Another 100 years passed and the nave built by the Cistercians in the mid-13th century was turned into a barn for the Catholic treasury in exchange for the possession of a field. A wall in the triumphal arch separated the church and the choir’s eastern wall was knocked down to make room for a door. The wall fell in 1997. 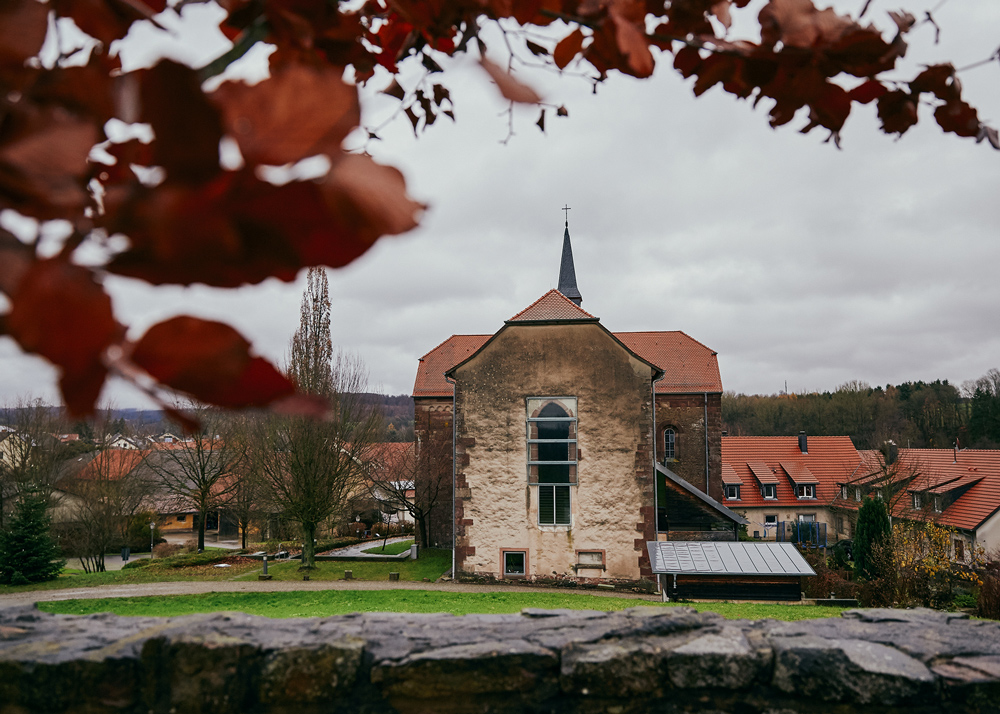 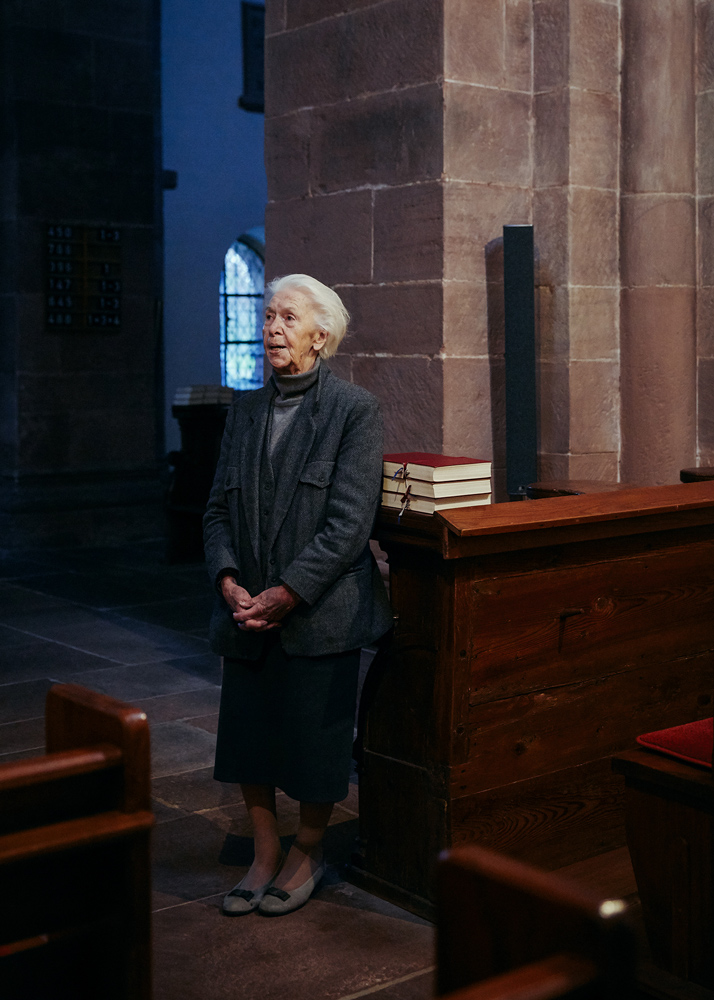 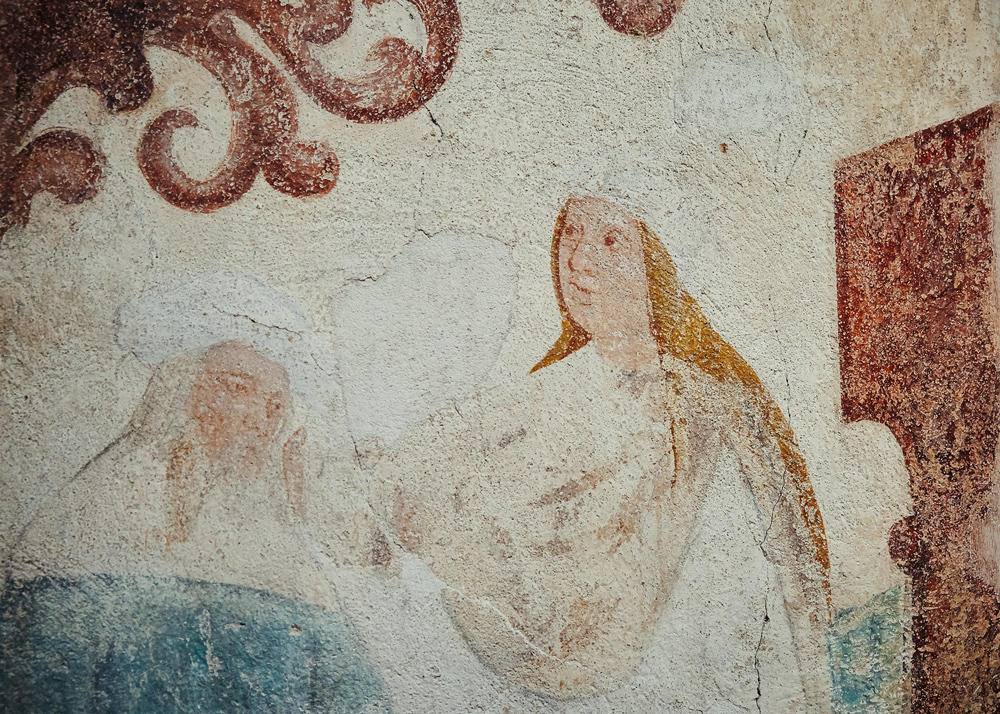 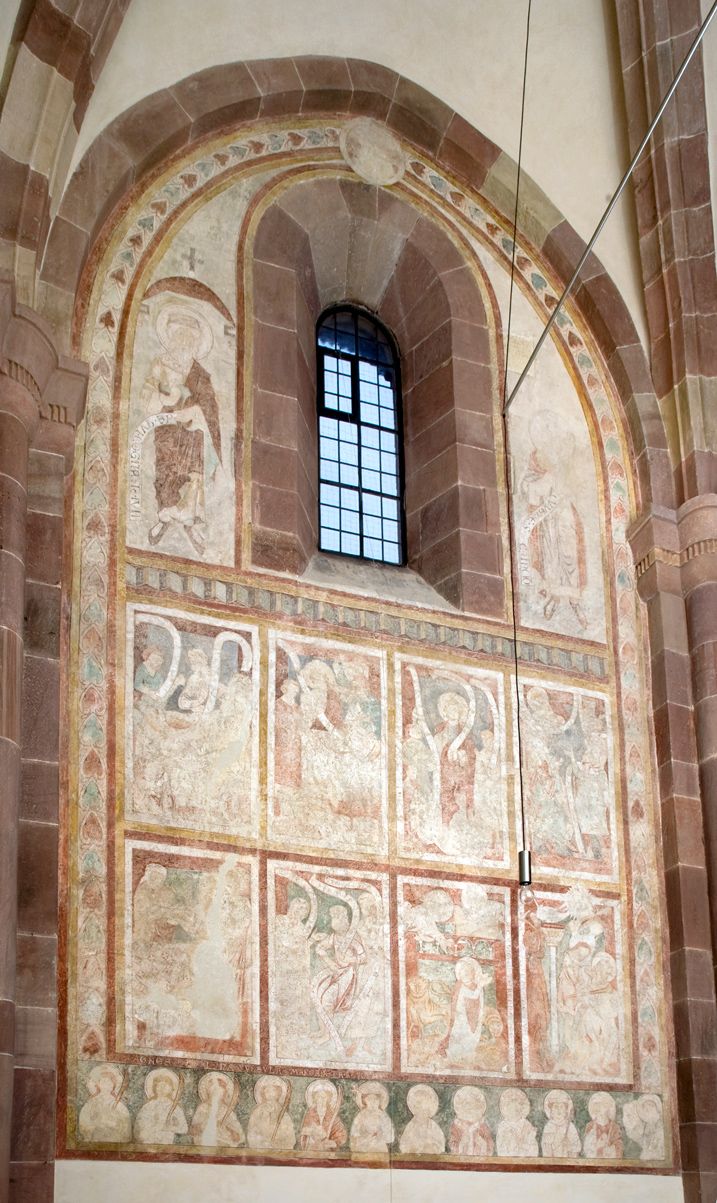 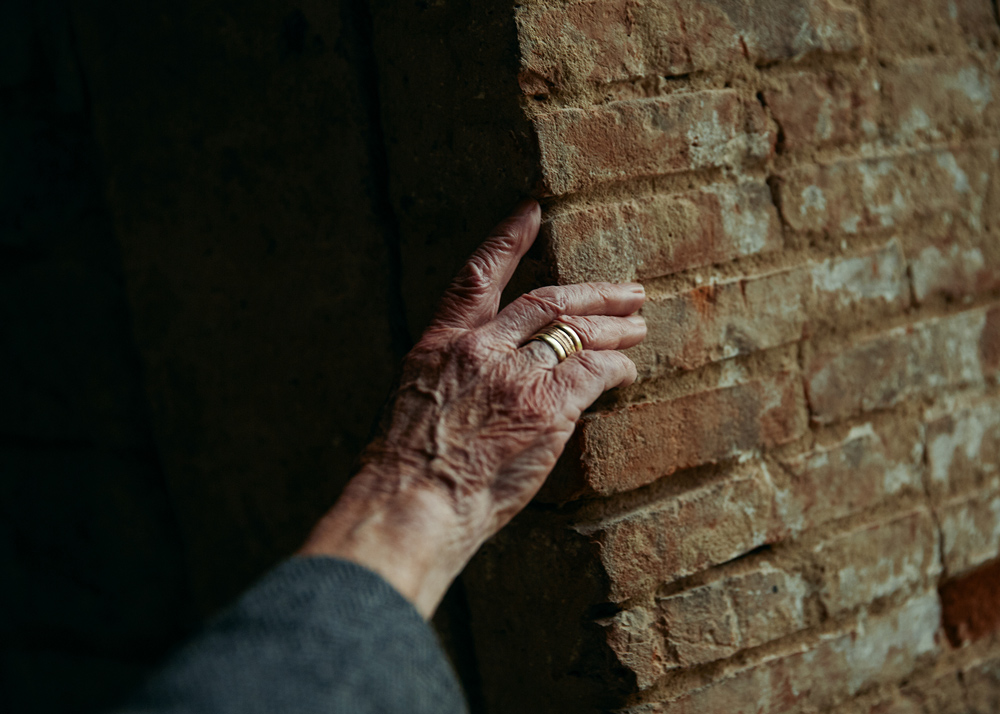 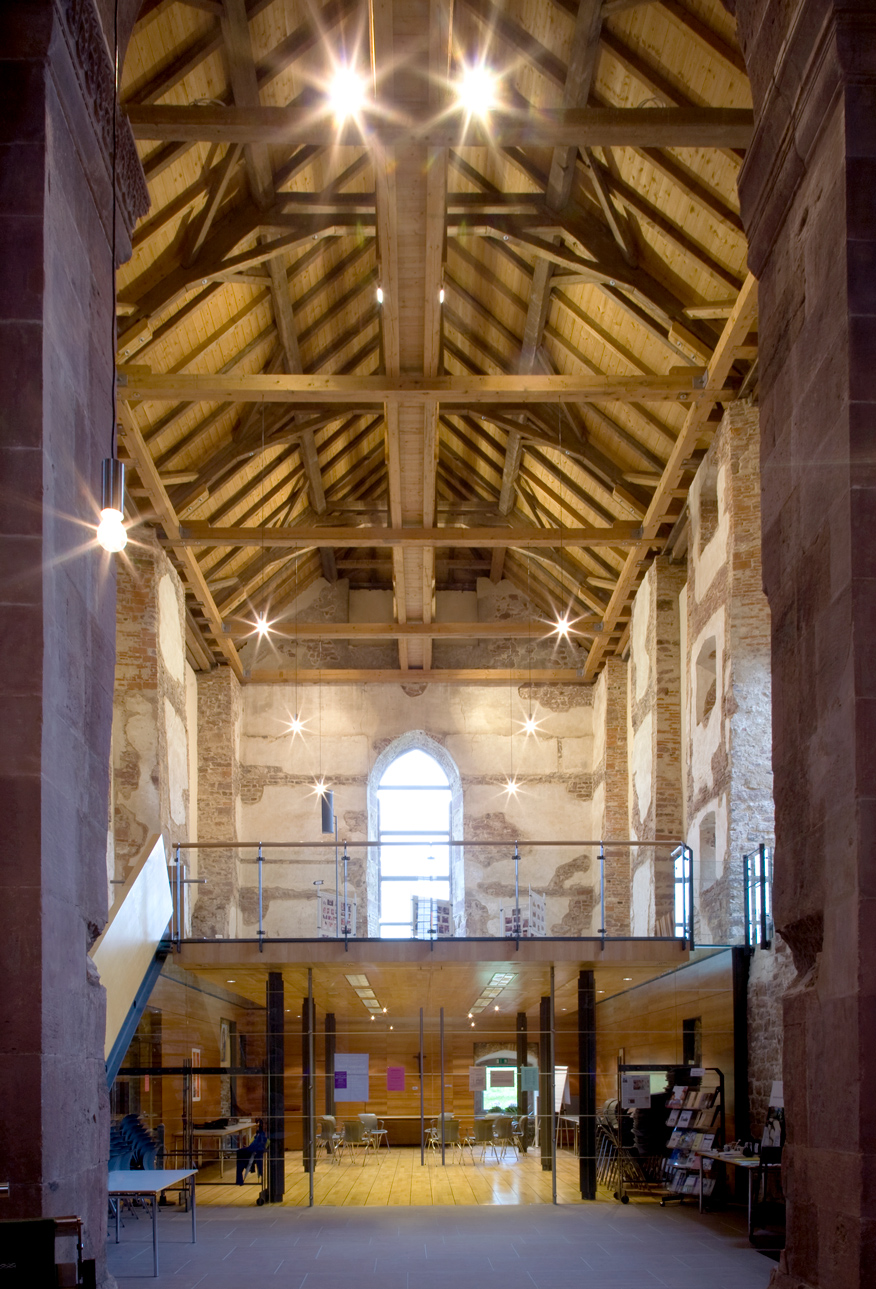 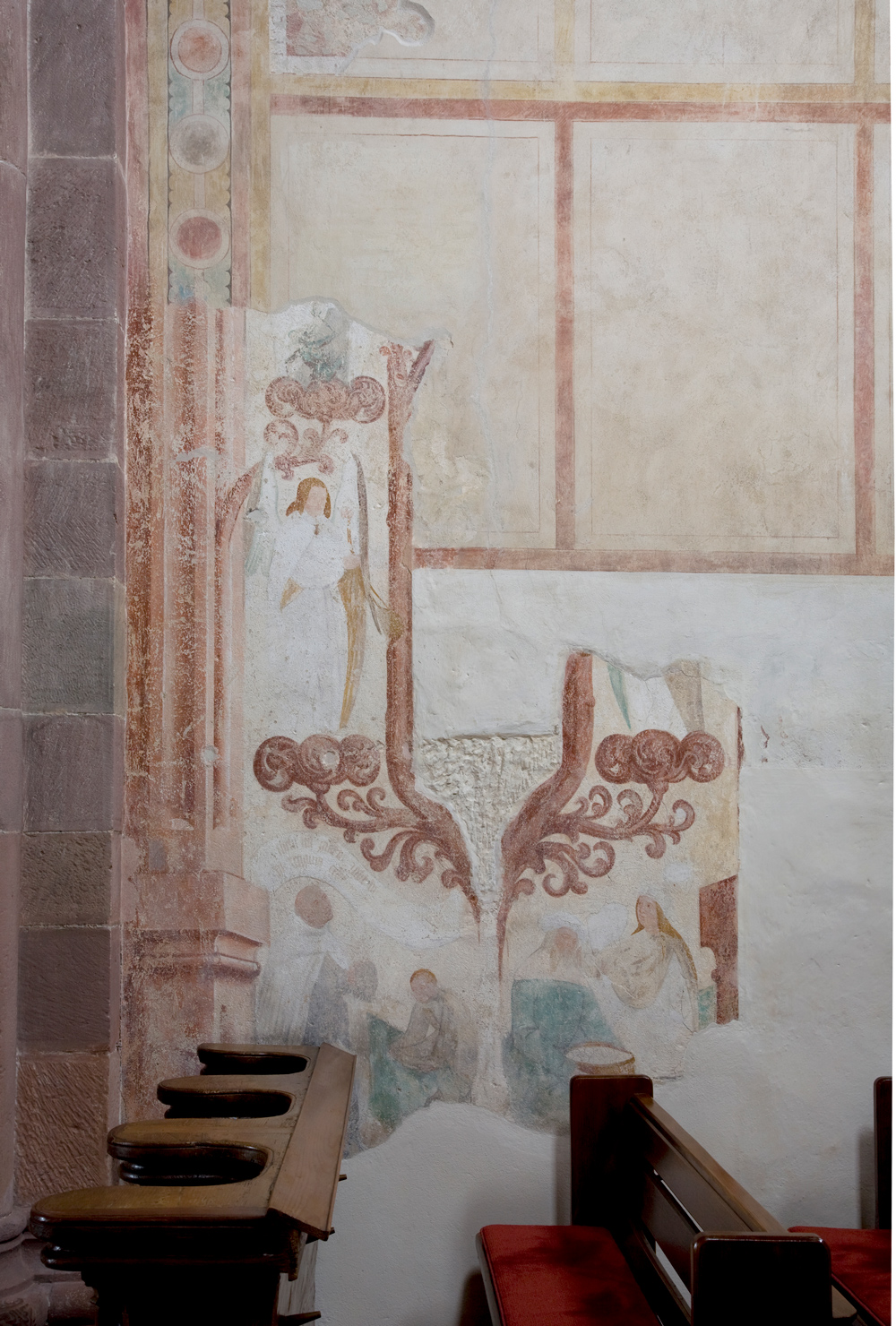 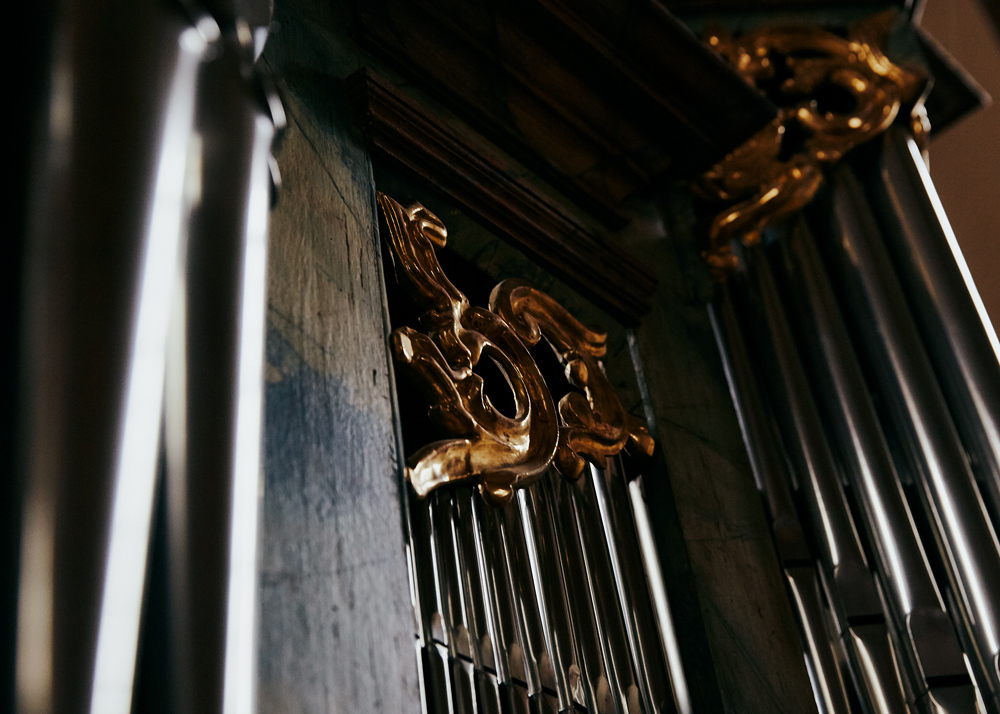 The monastery church tells an impressive tale of the past and, at the same time, has arrived in the present. In the western part of the nave, the winter church’s walkable light-flooded gallery allows a glimpse at century-old sandstone and quarrystone walls. The heavy church roof sits on an elaborate wooden structure. Light bulbs suspended at the end of long wires evoke hip big-city cafés. The historic organ built by Johann Heinrich Dickel in 1773, today, is placed on a gallery in the northern part of the transept. The pastor and organist Hans Martin Schäfer saved the organ in 1958 and established a concert series. Doris Ebert has overseen this series since 1980 and has helped organize more than a hundred concerts since. Today, the monastery church also uses the spiritual centre of the Evangelical church district of Neckargemünd-Eberbach for its events and seminars.

If Doris Ebert had one wish, it would be to meet the people who adorned the walls of “her” monastery church.

Doris Ebert gladly sits for long stretches on the church’s simple wooden benches. From here, she studies the paintings on the walls again and again. The artworks created in late Romanesque times as well as in the early, high and late Gothic period are long overlooked treasures. One exception is a research project funded by the Klaus Tschira Stiftung, a German foundation. It is based at the Department of History of Art of the Karlsruhe Institute of Technology. Research results about the history, architecture and furnishings of the monastery church have been published in 2001.

The 89-year-old Ebert knows all the research findings, has written countless articles herself, published her own books on the subject and read through archives. In every corner of the church, she has a something to add: historic matters, moments of discovery, as well as anecdotes. One such anecdote is that of a man calling in by telephone to point out to her that seductive Adelheid von Walldorf, one of the characters in Goethe’s “Götz von Berlichingen”, is buried in Lobenfeld. Doris Ebert had to disappoint the caller. The Adelheid von Walldorf whose heavy tombstone leans against the church wall died more than a hundred years before the Franconian-Swabian imperial knight called Gottfried “Götz” von Berlichingen—Goethe’s model for his drama—was ever able to tell tales of women.

In 1773 the organ, still in use today, was built by Johann Heinrich Dickel.

Doris Ebert shows the remains of angel wings. She points to a faint halo that must have belonged to pictures of the Virgin Mary and Jesus. She presents a painting on the northern choir wall that, up until a few years ago, nobody could interpret. Previously, two of the painted figures were deemed to portray women. They represent Synagogue and Ecclesia, the Jewish and the Christian church. Today, Doris Ebert assumes that one of the figures shows a man as a symbol for all of Judaism. And she has questions aplenty: “Who initiated all of this, who painted these pictures?” The Cistercians did not do it, that she is sure of: “They were not supposed to have decorations, especially not in a Frauenkirche (Church of Our Lady).” If Doris Ebert had one wish, it would be to meet the people who adorned the walls of “her” monastery church—but also those who painted over the artworks in white. And also those who scraped off these layers of colour with wire brushes—and severely damaged the artworks in the process. “What they did was truly awful,” says Doris Ebert and shakes her head.

For 20 years, she has been looking for someone who, in the future, will invest as much blood, sweat and tears into the monastery church and its wall paintings. Someone to whom she can pass on her library and her knowledge. Her passion is time-consuming and expensive, she admits. Throughout the past decades, she has invested more than 25,000 euro in travels, books and enquiries into the subject. Now, at almost 90 years of age, she thinks about slowly retiring—even though not even two hours in the creeping cold seem to have any effect on her. To read in the cozy warmth of her home, surely is a comforting alternative. But so far, she has always decided against it. 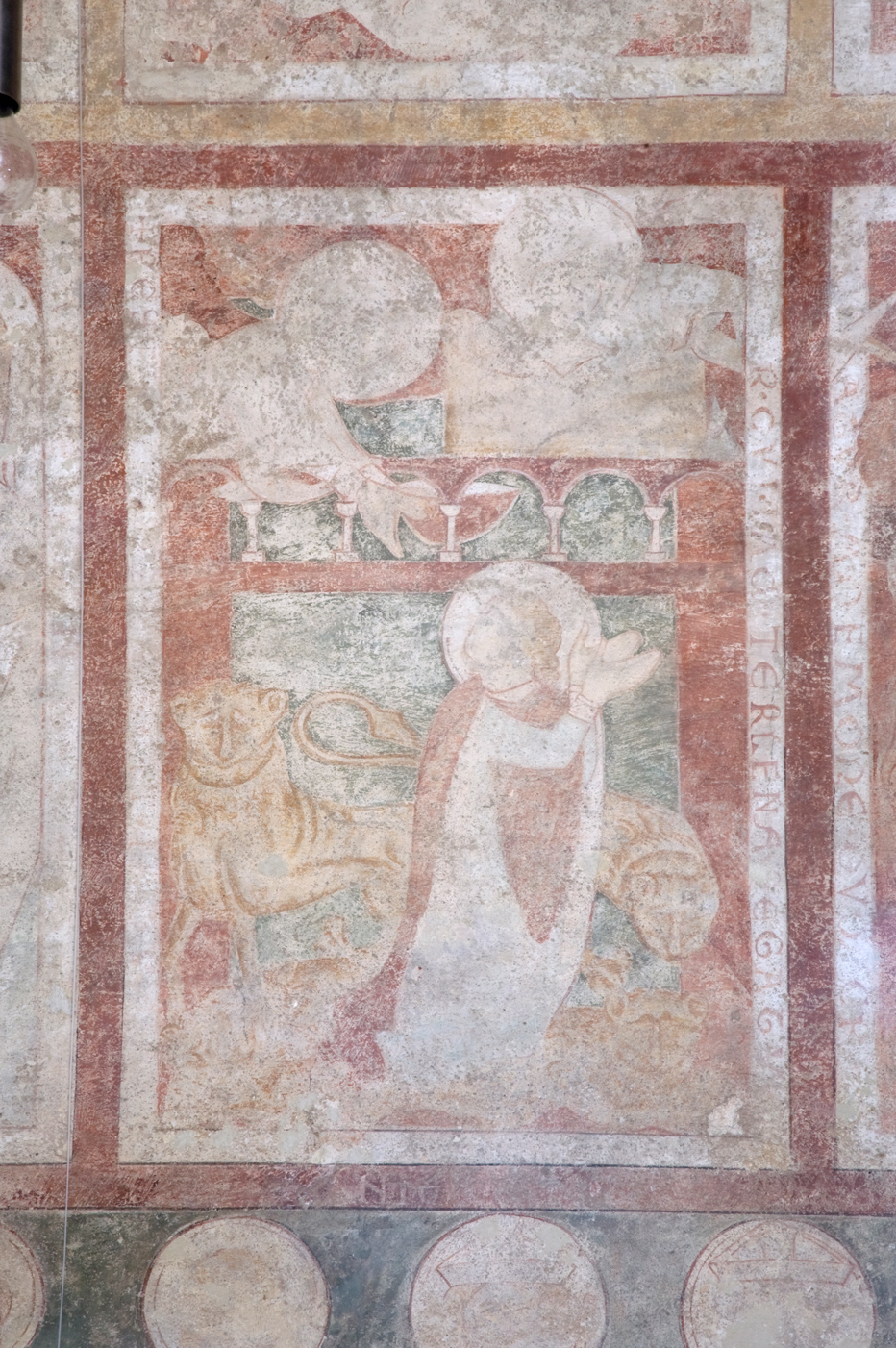 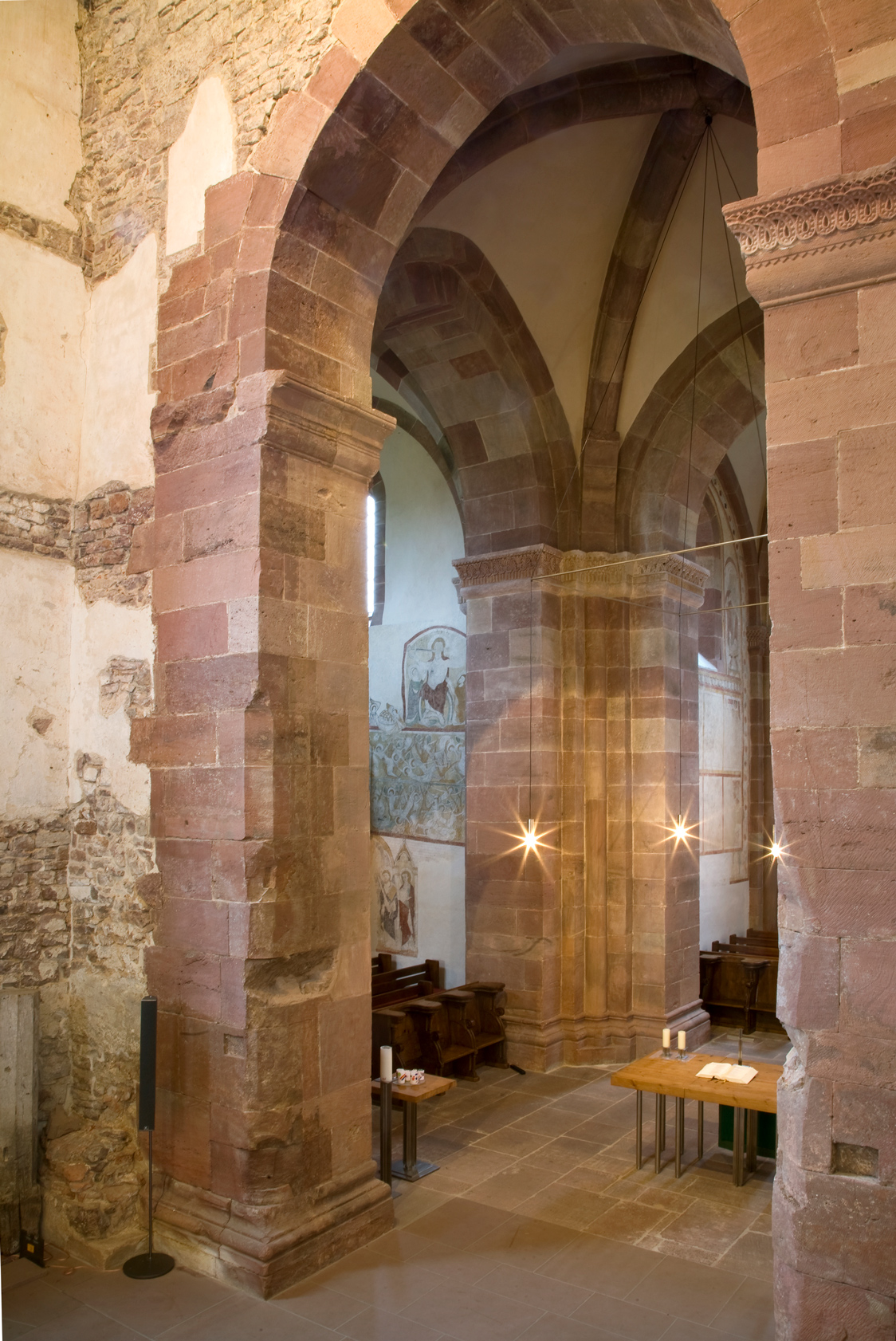 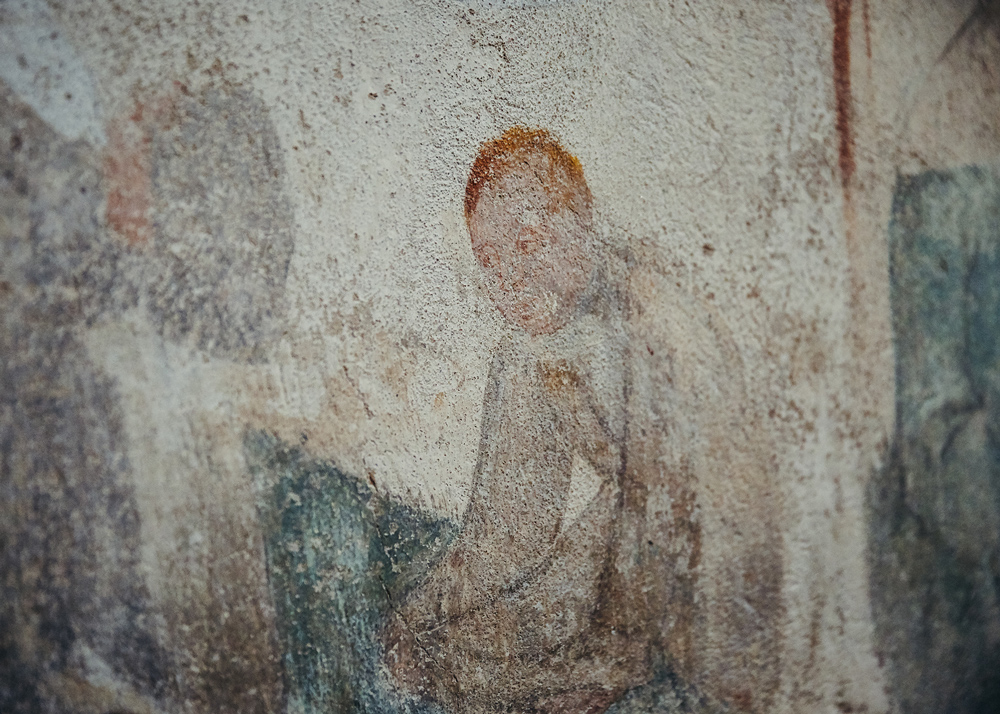 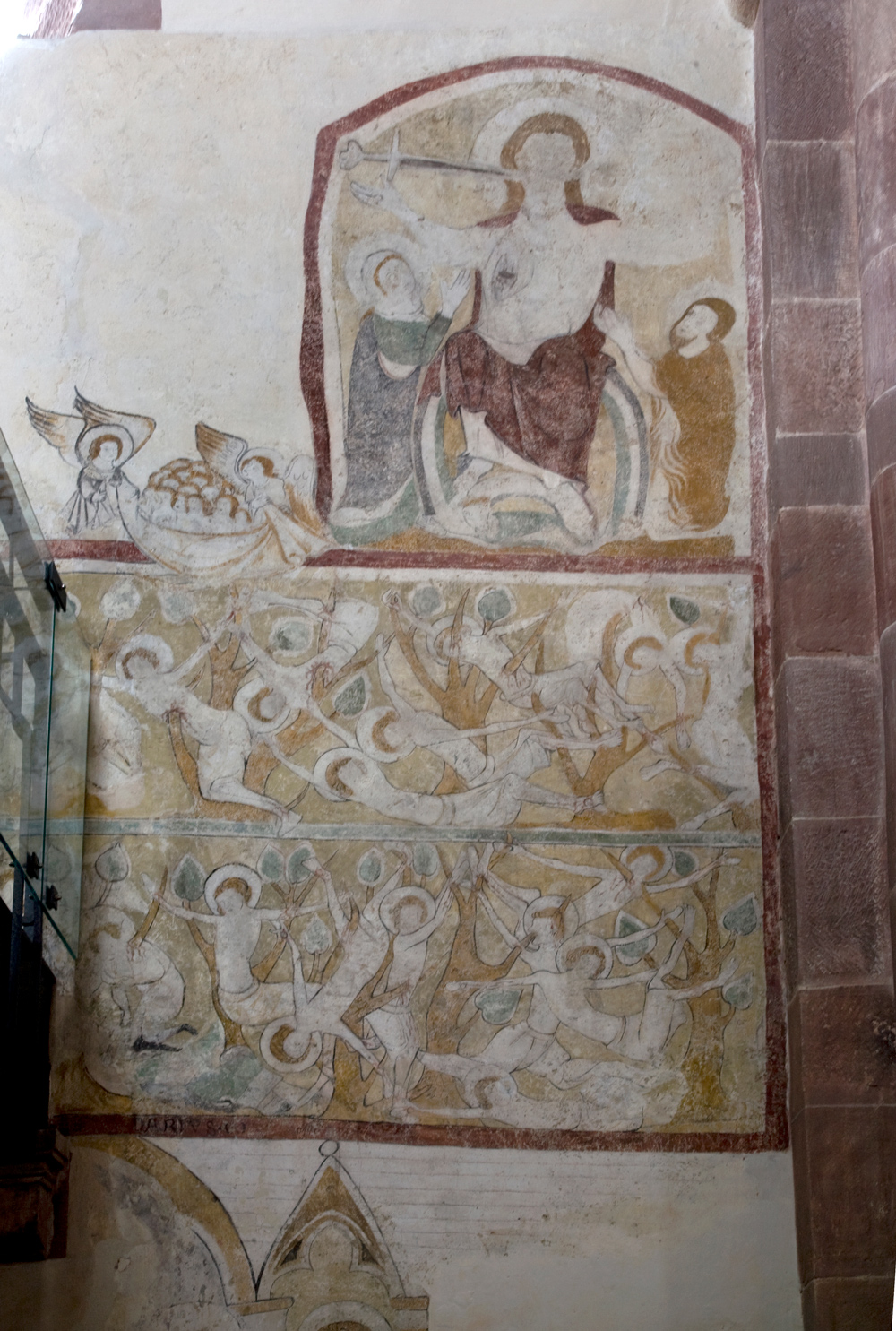 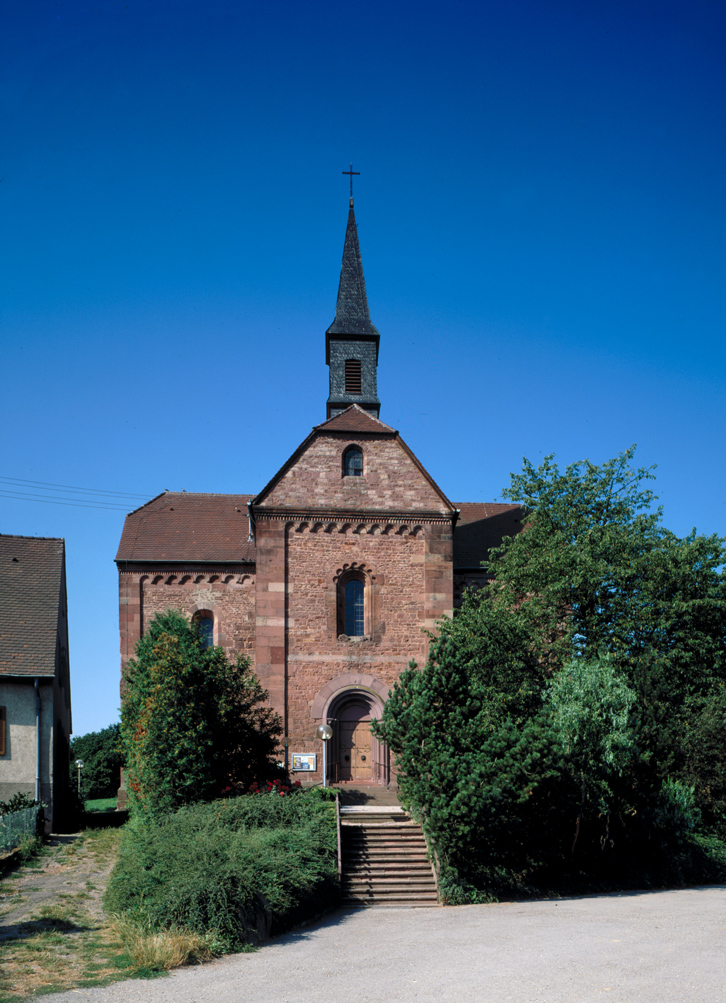