The over 800-year-old fortress on Dilsberg mountain at Neckargemünd does not only offer impressive ruins and a mysterious tunnel, but also presents a very special inn: Eva Heß travelled around the planet to finally come back and turn an old building into a chocolaterie.

The town gate made of sandstone opens the pathway to the past—to a castle ruin, a bulbous water tower, a former fire gate and two proud churches. But at the same time it leads into the present: There are 80 households inside the walls of the fortress high up above Neckar river on Dilsberg mountain. The narrow alleys require patience of pedestrians and drivers and a strong stomach for the refuse collection staff. The scene is a crossover of several hundreds of years—with a chocolaterie amidst it.

In this tiny town Eva Heß has turned the ‘Gasthaus Zur Burg’ (the fortress pub) into a cosy inn decorated with loving care. Together with her employees she sells home-made pastries, jams, chocolates and filled chocolates in a small room with lots of nooks and crannies. Elaborate cakes and gateaux attract the visitor to stay for a while in the dining room next door. Old baking tins and paintings on the walls tell their own stories and so does the beam inscription: “Rede wenig, rede wahr… trinke viel, bezahle bar!” (Talk in a dash, talk true… drink a lot and pay cash!) The first floor invites guests to sit on a little terrace or in a large and bright room around a grand piano. Sometimes, Eva practises here for her own piano lessons. And she organizes concerts with pianists and three-course dishes—the chocolaterie also serves hot dishes, made of local and seasonal foods.

An old fountain makes splashing noises next to her house, quite noisily and steadily. Ivy and Virginia creeper climbed up the pale-yellow corner house that looks a lot smaller from the outside than from within. The castle ruin is situated only a short walk from here, past the half-timbered old town hall. As a child, Eva used to walk this path almost every day. Her family lived outside of the fortress walls, but her school was located inside, in the former Kommandantenhaus (commandant’s house) next to the castle ruin. 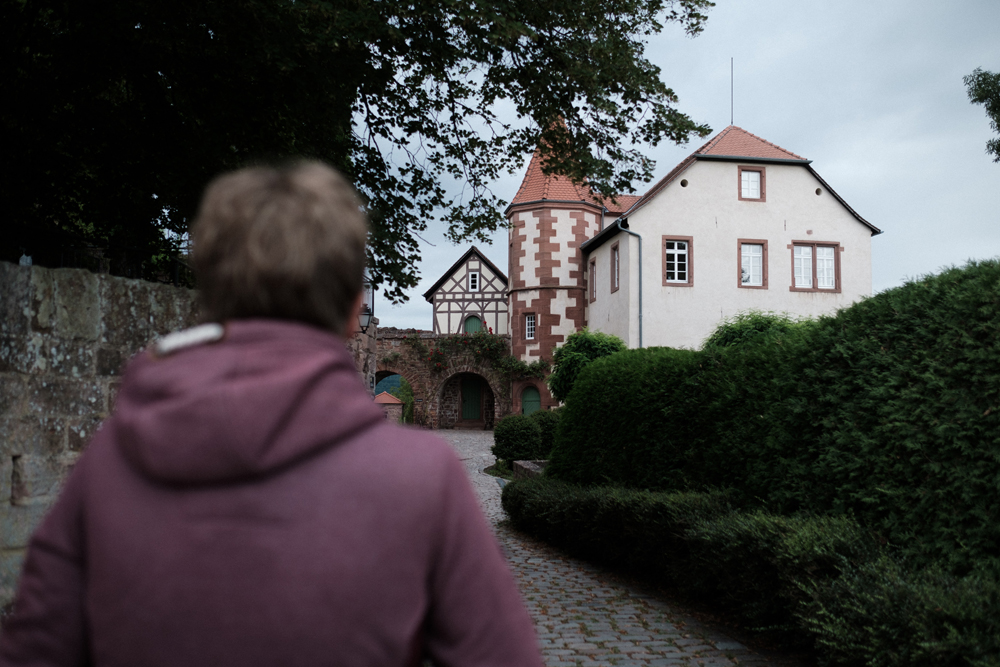 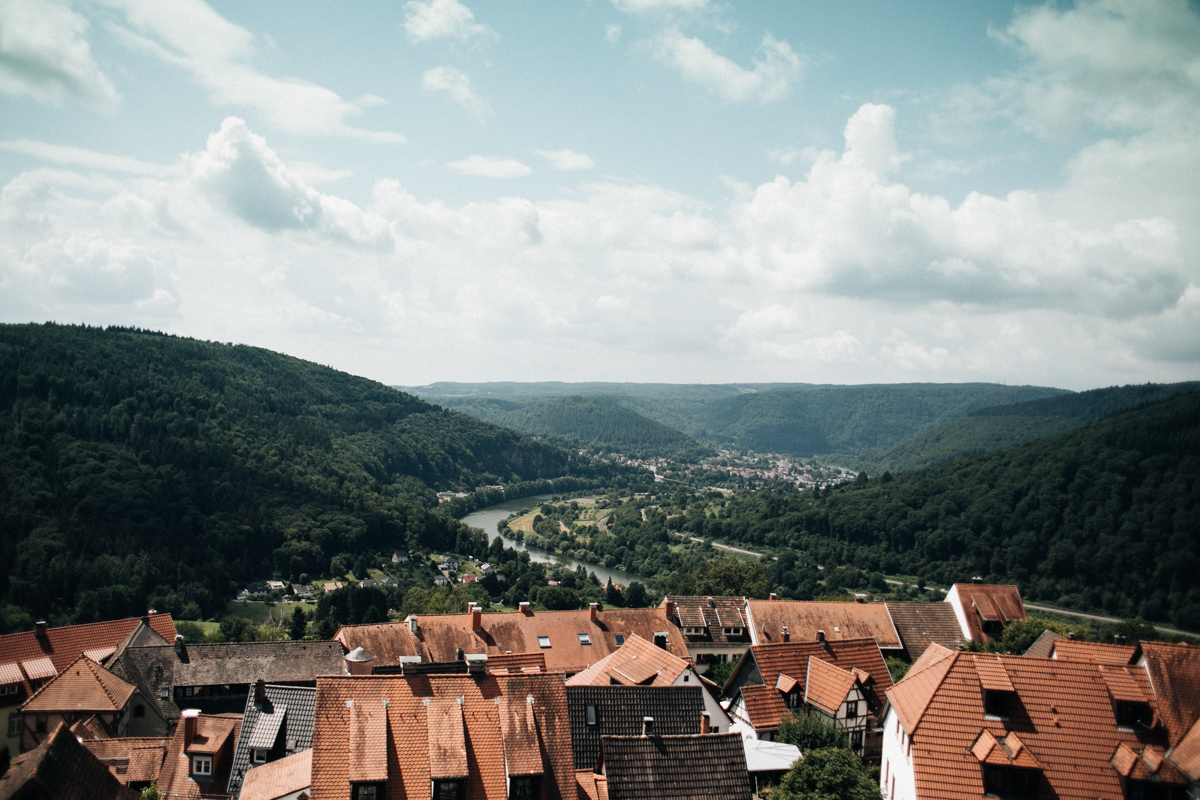 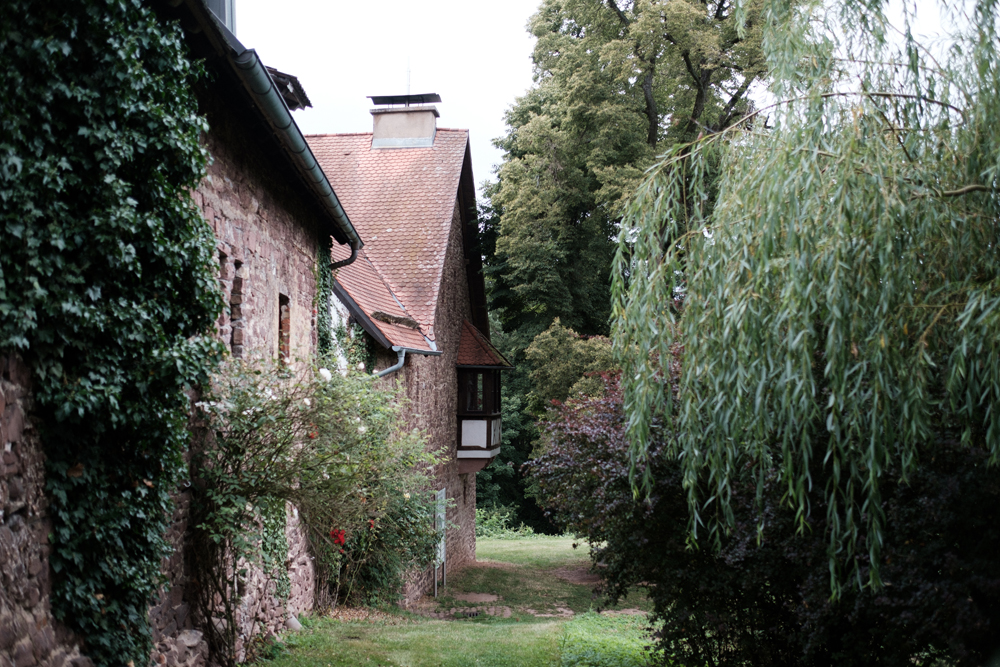 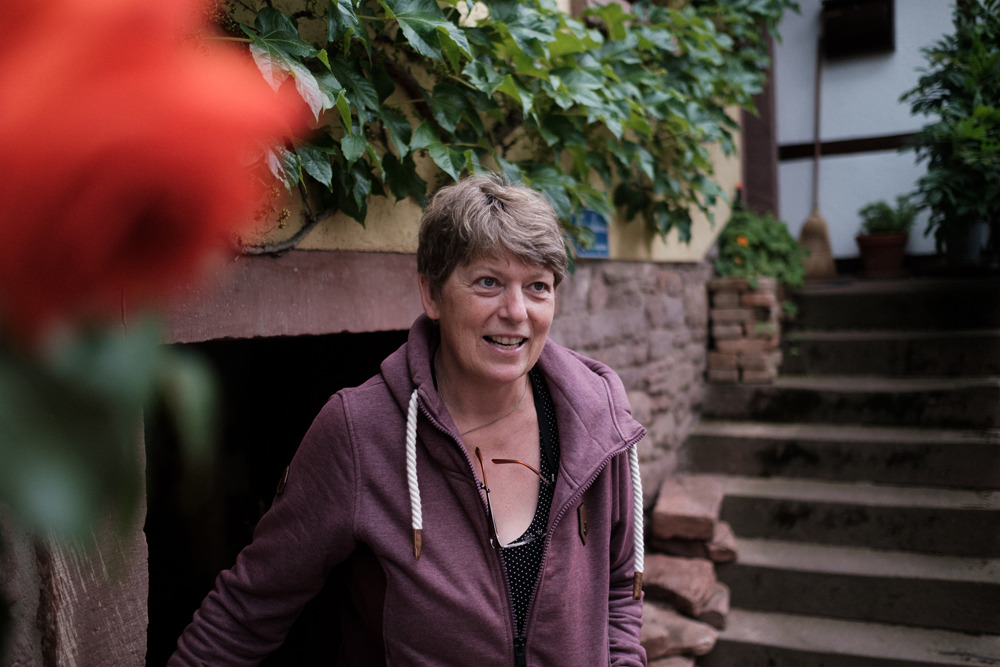 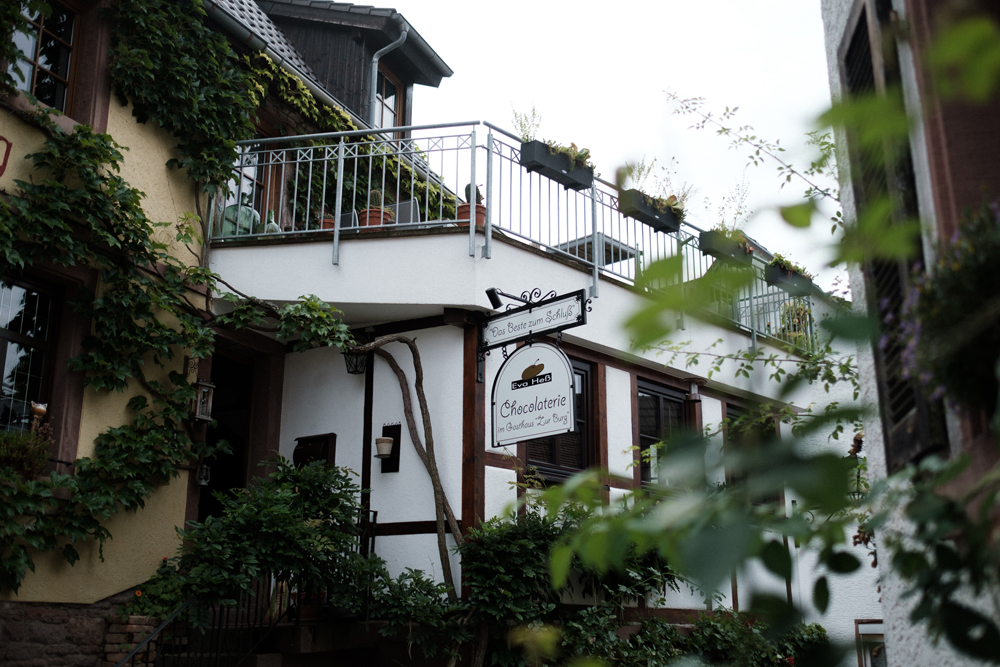 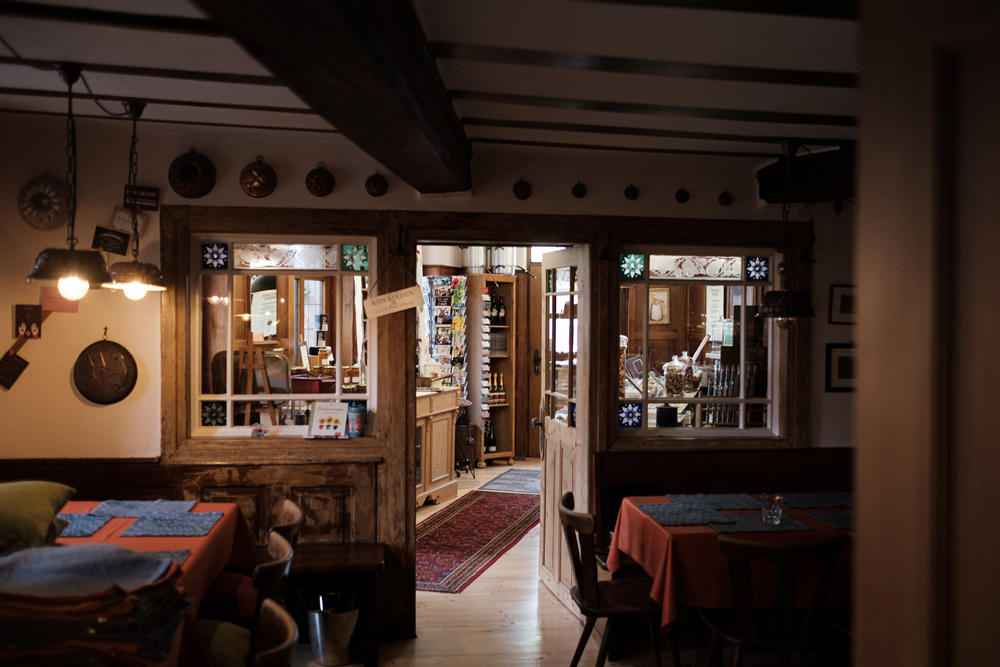 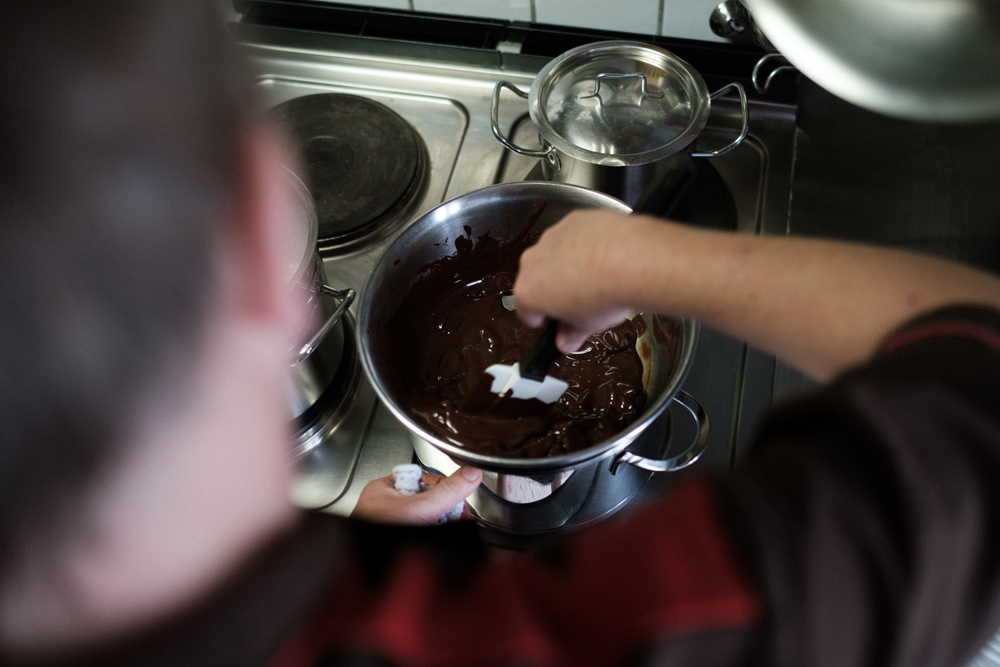 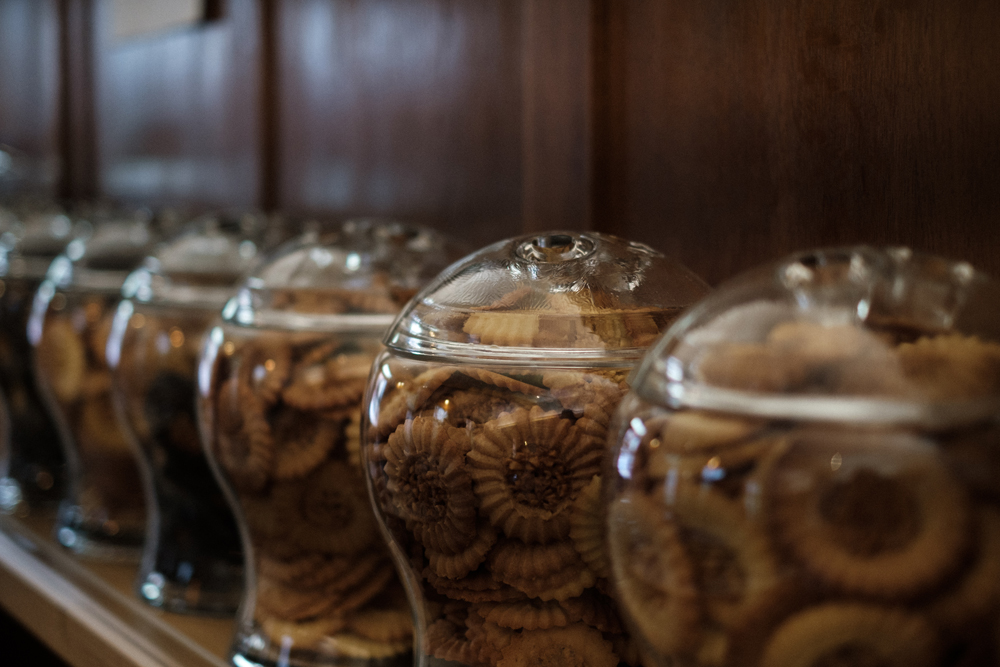 At a height of 16 metres, a small wooden bridge connects the castle tower with the wall. The view on the Neckar and the towns of Neckargemünd and Neckarsteinach from up here is magnificent—the world ‘down there’ looks tiny and quiet. An excursion boat by the Weisse Flotte Heidelberg chugs along the Neckar loop. Some millions of years ago, this river loop shaped the mountain peak. The first historical marks on Dilsberg mountain were left by the Romans. The fortress was erected by the counts of Lauffen around 1150 and 58 years later mentioned in documents for the first time. In the 14th century the fortress was in the possession of the Electoral Palatinate. During the Thirty Years’ War it was heavily disputed. It survived even the Nine Years’ War, in which the French general Mélac, the ‘destroyer of the Palatinate’, and his unit camped in the fortress. The fact that it is a ruin today, however, has another reason: It was in the possession of Baden from 1803 and during that time the population was very poor and needed bricks to build their houses.

“Look down at the Neckar, immersed in thought.”

There is a very special place, which has survived all of these upheavals: After the bats from Dilsberg have left their winter retreat cave, tourists are allowed to enter a narrow, almost 80-metre long tunnel at Höllenberg mountain, just below the ruin, and walk into the mountain. The walls are damp and the temperature is cool. At its destination, water drops from the ceiling and weak light makes the water shimmer blue. Voices from above reverberate mysteriously through the corridor. The tunnel used to be filled up for a while, until American writer Mark Twain during a visit at Dilsberg heard of a legend about an underground path inside the mountain. Around 1900, German-American Fritz von Briesen read the text by Mark Twain about the secret tunnel and came here from New York to look for it. He was let down on a rope and, indeed, there was something to discover there. With his support, the tunnel was finally cleared in the middle of the 1920s.

Eva went to school only a few metres away from this tunnel—in the former commandant’s house of 1550, which was owned by the municipality from 1852 and was used in various ways since then: as a town hall, a shelter, a prison, a place for displaced persons or clubs. Today, the charitable, cultural foundation ‘Kulturstiftung Rhein-Neckar-Kreis’ organizes concerts, exhibitions, readings and discussions or offers residencies in the building—to support new art high above the Dilsberg. The beige and red tower with the green door brings back memories: Eva recalls the big key, with which she used to open this door to reach the school’s toilet. She recalls the lessons, when she used to “look down at the Neckar, immersed in thought.” And some uneasy thoughts as well: She was “re-educated” from left to right-handed here with a cane. At eight years of age, Eva and her family moved to Bammental and left the Dilsberg and its magic that she had hardly noticed until then behind her. She trained as a confectioner in Heidelberg, went to Wangen in the Allgäu, to Switzerland, Tunisia and to the ‘Schwarzwaldstube’ (Black Forest inn) for star chef Harald Wohlfahrt. She went backpacking the US, Asia, Australia and New Zealand. Back home in Germany she worked as a “travelling master confectioner” and finally wanted to find a place to stay for good.

Why here at Dilsberg mountain? She got the house by “happenstance,” is the answer. Eva was attending a seminar and her seatmate told her about her partner, who had bought a house on the Dilsberg to open a restaurant. But the man had died and the community of joint heirs wanted to get rid of the building. Eva felt electrified by the idea and the next day she had a viewing. Without thinking too much about it she bought the building from the year 1600. The kitchen was ready. “I knew I could start working straight away and earn money—this took away my doubts.” However, there was so much to do: “Every inch was pasted with paint” and sometimes even with tar. The panelling was varnished in a brown shade, the wooden stairs tiled.

After a period of 18 years’ work on three floors, it is now the cellar’s turn. Eva uncovers the sandstone brick by brick. She slaves away in the trades of “raw material procurement, rabble haulage, site supervision and as a designer.” Equally, the 51-year old works on herself with care. She uncovers “abysses and plasterings.” The cellar, just like oneself, has also corners that one doesn’t like so much. The warm-hearted, hard-working woman puts it in a pragmatic way: “Beautiful things get highlighted, less beautiful ones integrated.” Eva put all her energy and her money into the house. And she doesn’t regret it at all. She met her husband on the Dilsberg. He is a master electrician. Their son will be twelve soon. And what about the wide world? She still feels wanderlust—but also the certainty of having found a place that matters enough to her to make her stay. 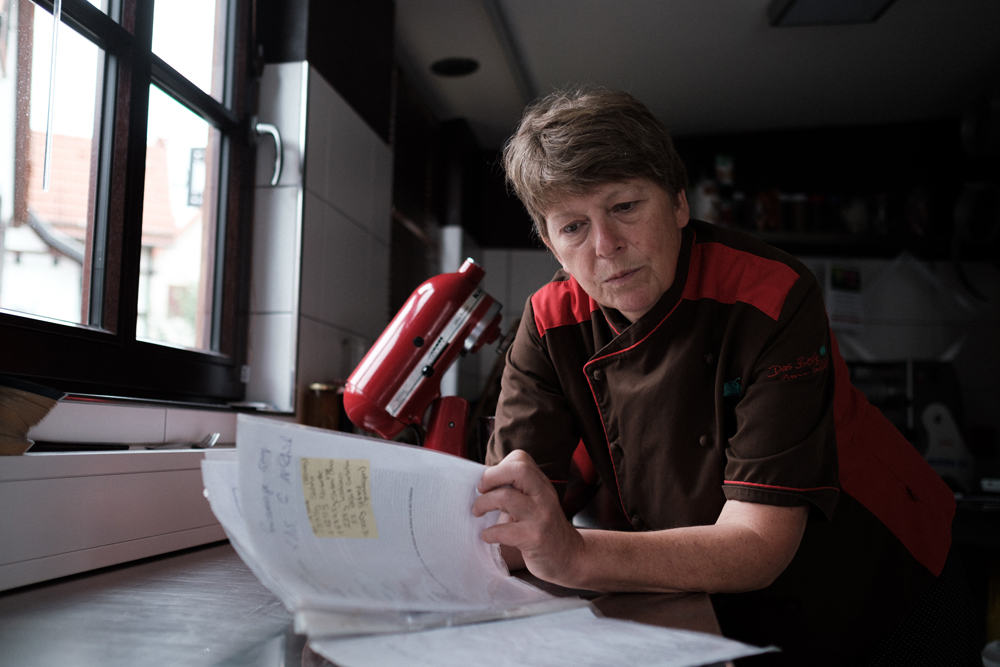 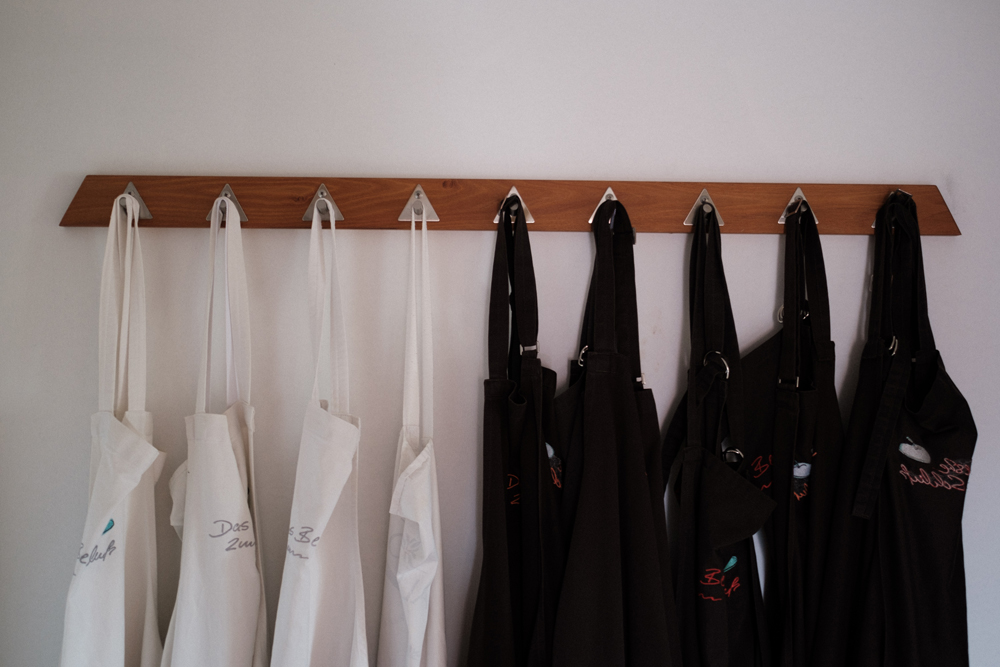 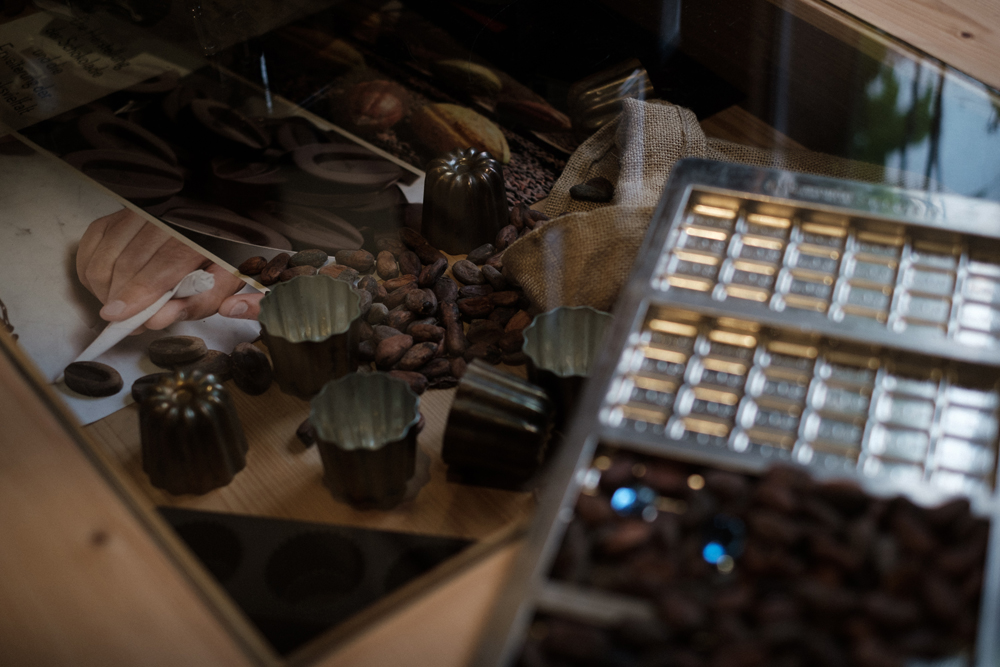 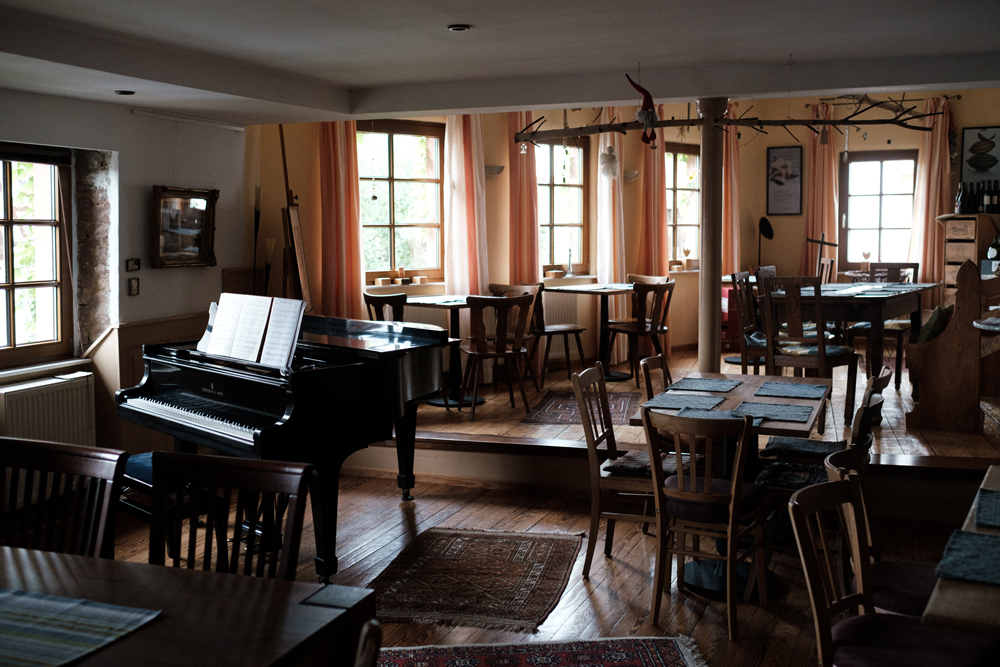 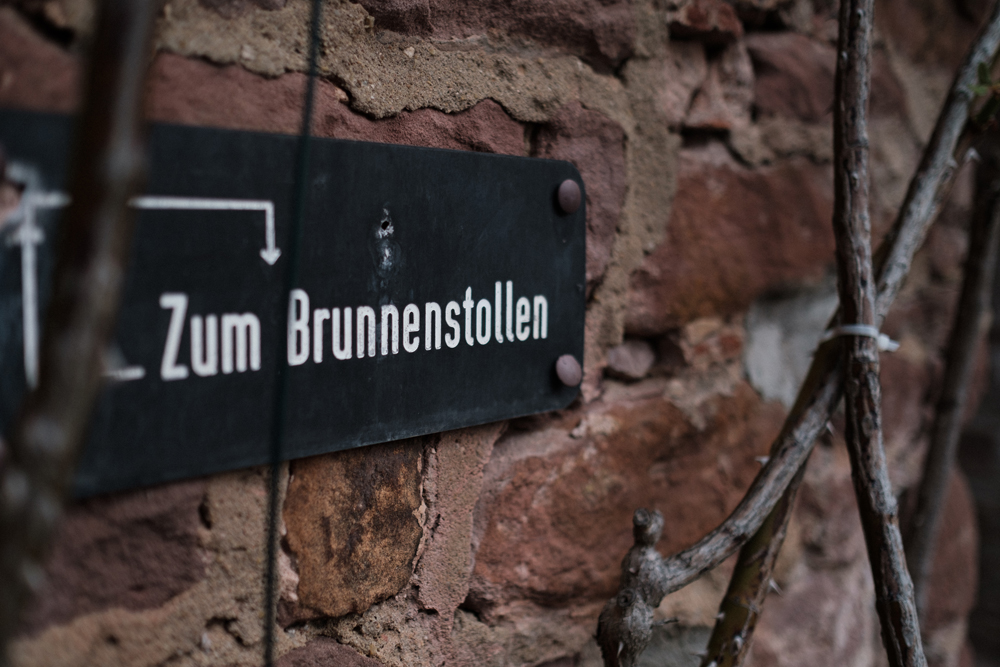 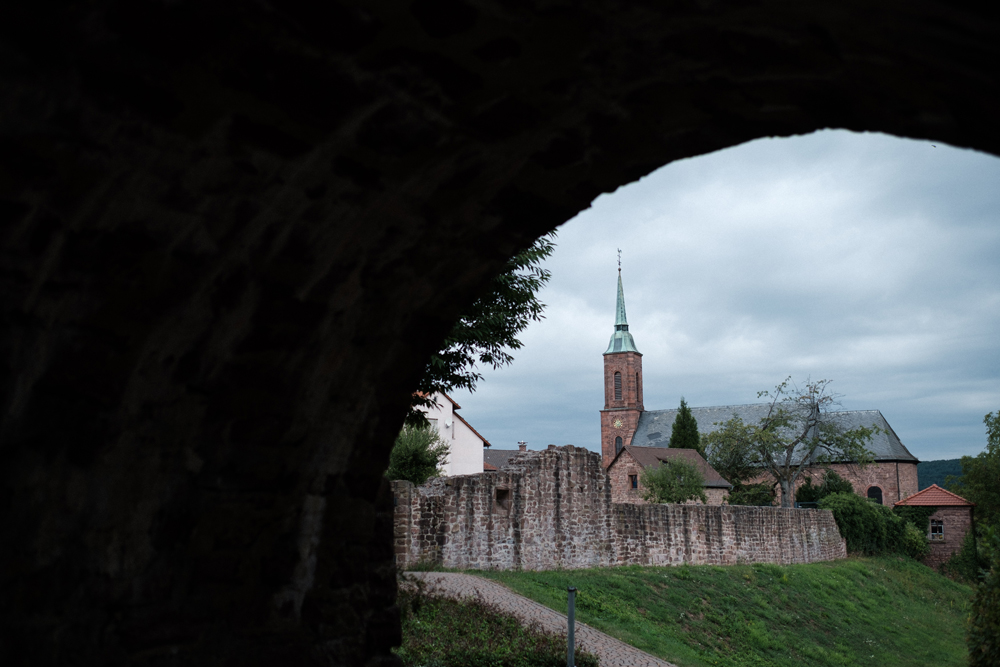 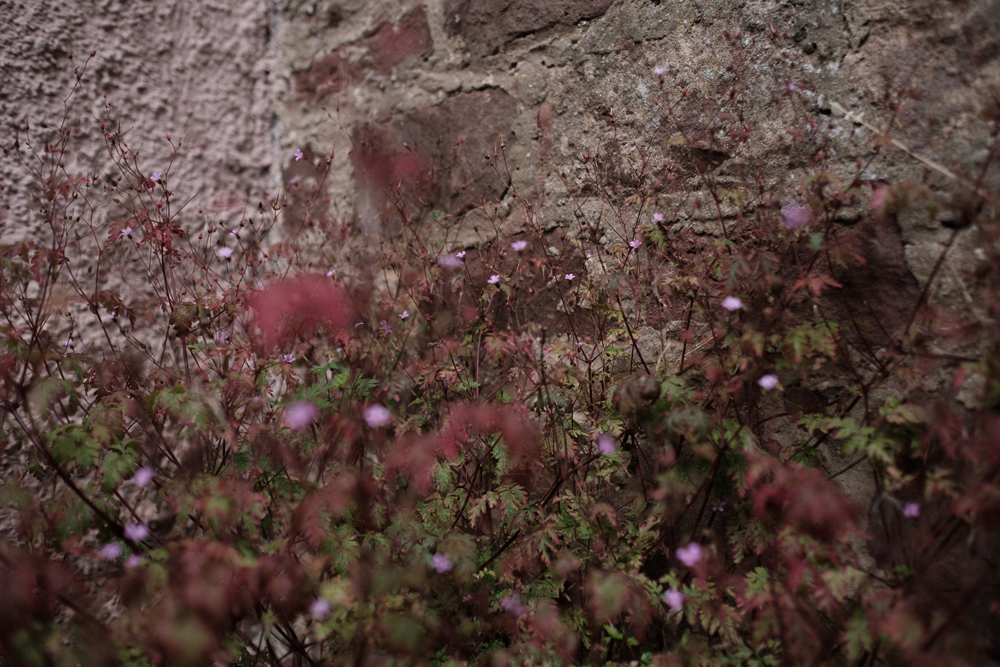 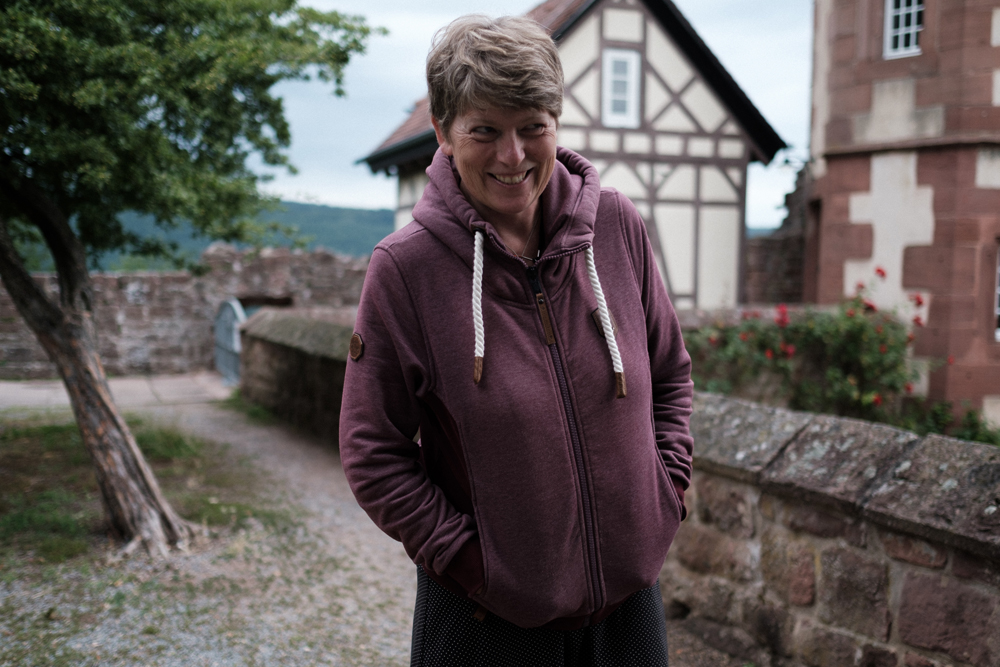 Capturing it as it is