In the Bauland region, thousands of litres of organic milk curdle to become soft and hard cheese. Ursula Krauth has established the Kirchenkäserei cheese dairy on an old farming estate. She founded a cooperative, in which people with and without disabilities work together.

Ursula Krauth carefully lifts the cap of a 1,000-litre container. It is half filled with thickened milk. In its centre, a rake spins, carving fine cuts into the pasteurized mass until the “Gallerte” become friable. The Sindolsheim local and wife of a priest takes a light-blue scoop and buries it in the stainless-steel container. “Good cheese is made of nothing but fine milk, cheese dairy cultures, rennet and salt,” says Ursula. Without any additives or any other ingredients. 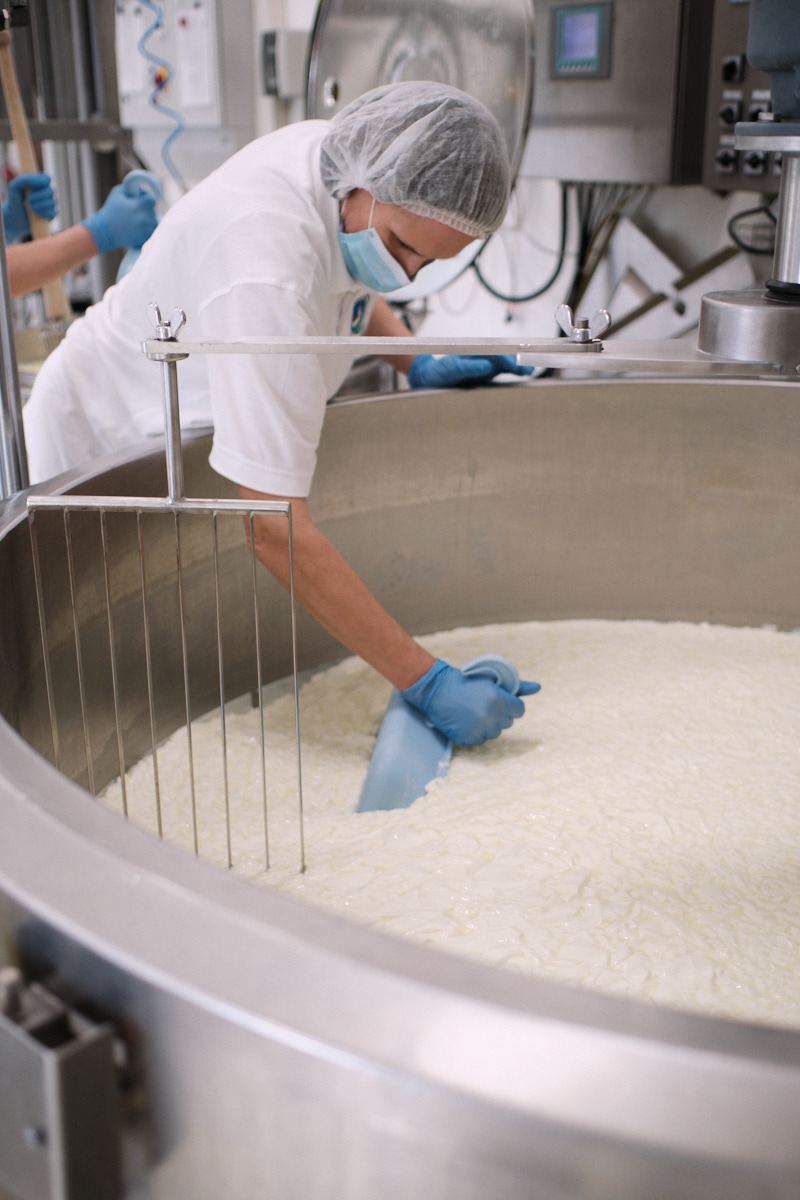 Cheese-maker Ursula Krauth: “Good cheese is made of nothing but fine milk, cheese dairy cultures, rennet and salt.”

The agricultural engineer began making cheese in Sindolsheim in 2019, after she had completed further training to become a local cheese-maker as well as a whey-specialist training programme. “I discovered my passion for cheese when I started making it,” Ursula says tersely and smiles. This happened when she lived in the Black Forest and started to process sheep’s milk in the Baar plateau region one day. But then, Rüdiger Krauth was appointed dean for one of the four parts, Sindolsheim, of the 2,000-souls municipality of Rosenberg. The municipality is located half an hour’s drive north-east of Mosbach. One third of its surface consists of forest. The family have found a new home in this place, whose streets are usually deserted, and, whose village community is all the more warmly connected. On Saturdays, when the dairy shop and the café are open, the cheese dairy is a meeting point rather than an enterprise. On these occasions, Sindolsheim locals meet on their table for the regulars to have a cup of coffee together—and a variety of cheesecakes. 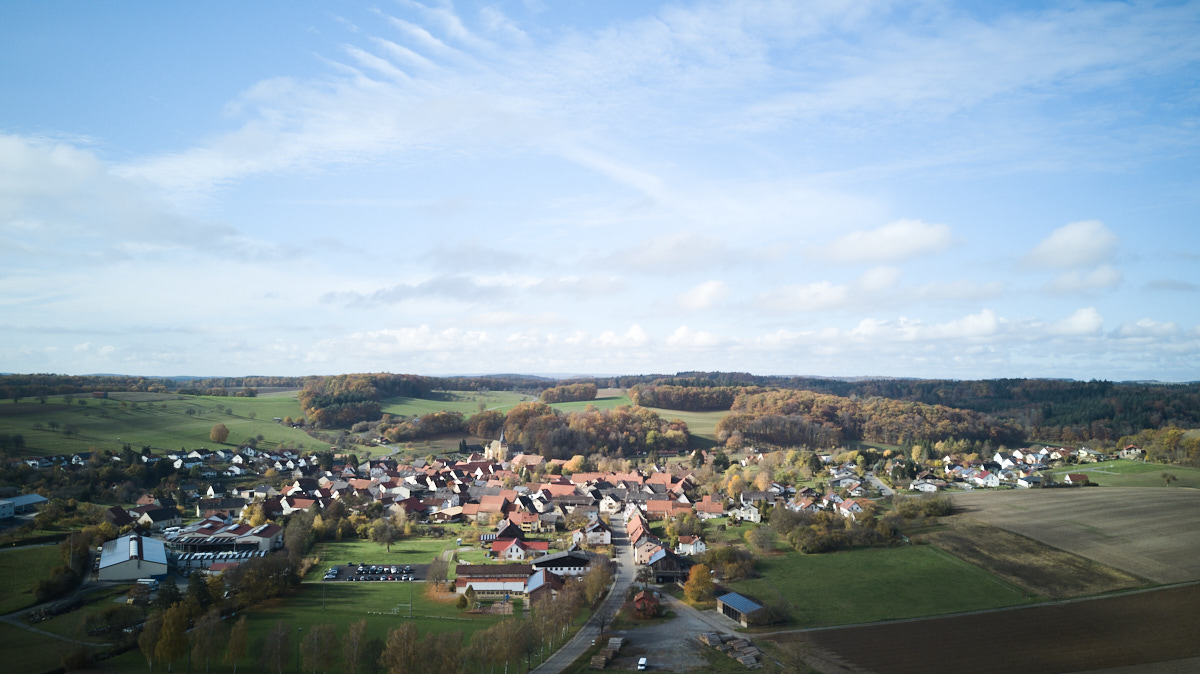 Sindolsheim – one of the four parts of the 2,000-souls municipality of Rosenberg in the Bauland region.

The idea behind the cheese dairy is a special one as well. It is a church company, integrated into a cooperative association that is linked to the Diakonie charitable organization of the Evangelical Church in Germany. This way, they put the community spirit to practice in their entrepreneurial activity. Apart from Ursula, there is a master whey specialist. The other eleven employees, Minijob employees and volunteers, two of whom have a disability, were trained by them. “I want to give people, who can’t easily access the regular labour market, a chance.” Ursula draws up the schedules according to the ability of the employees. “However, everyone has to help with the cleaning work,” she laughs. 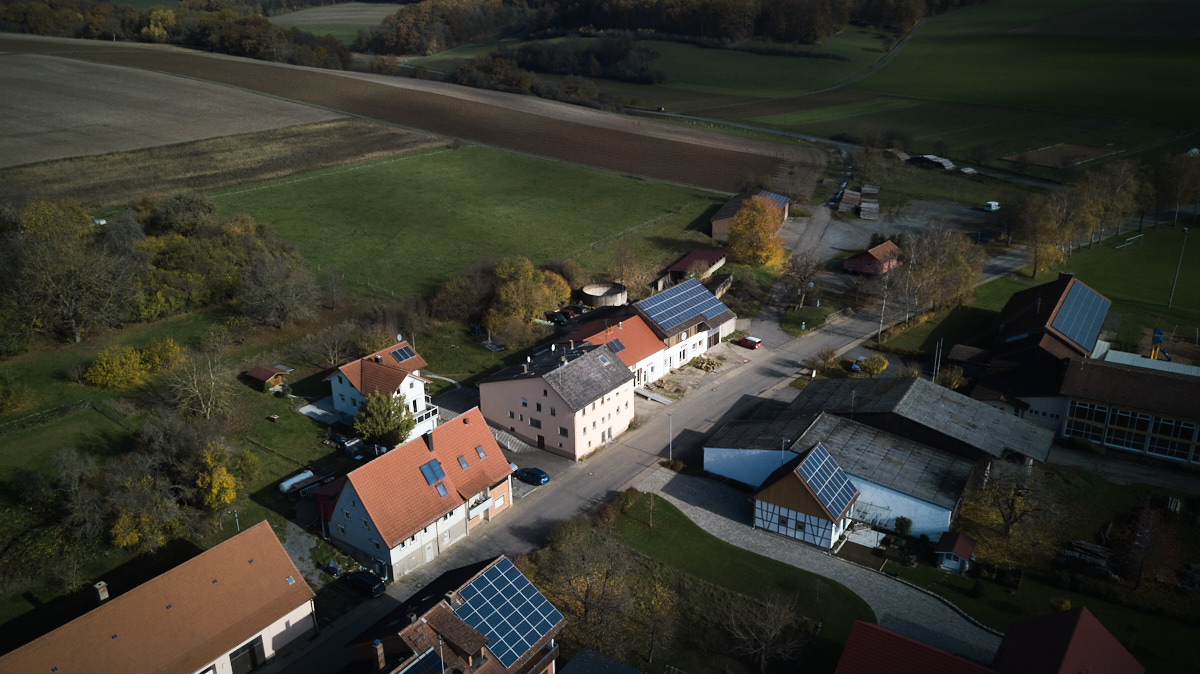 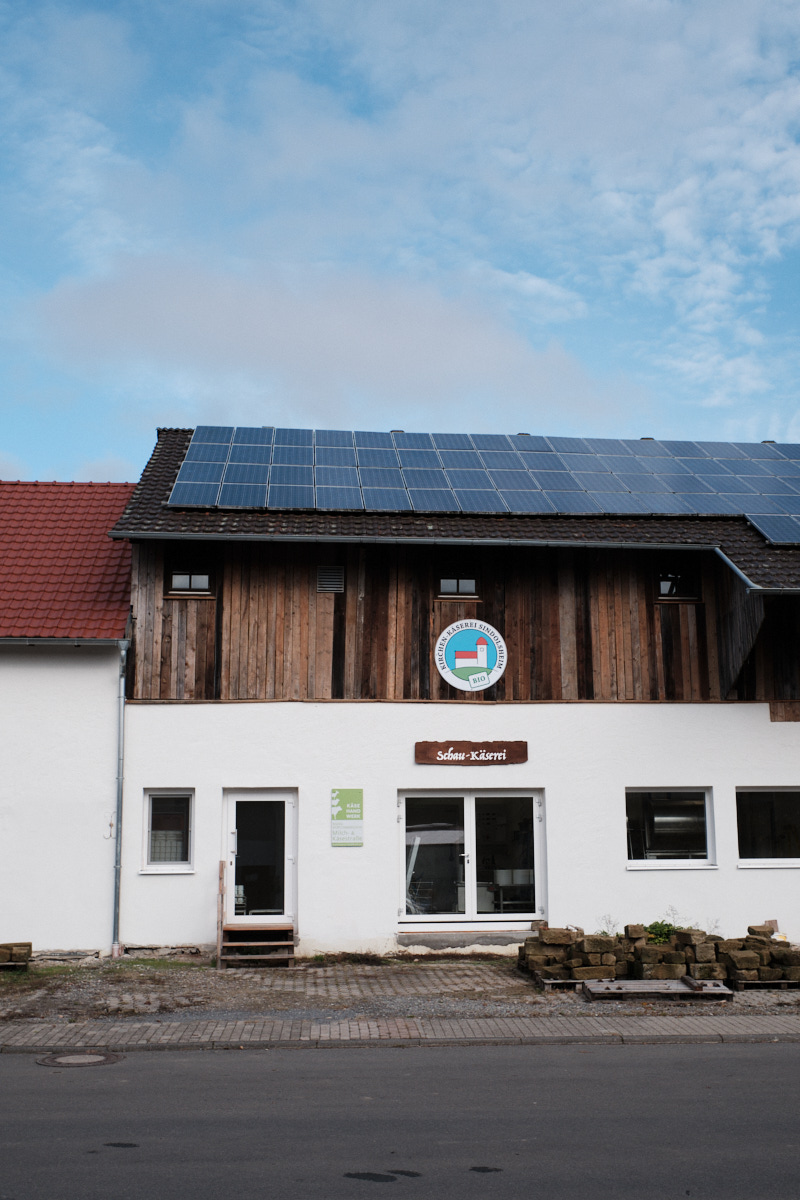 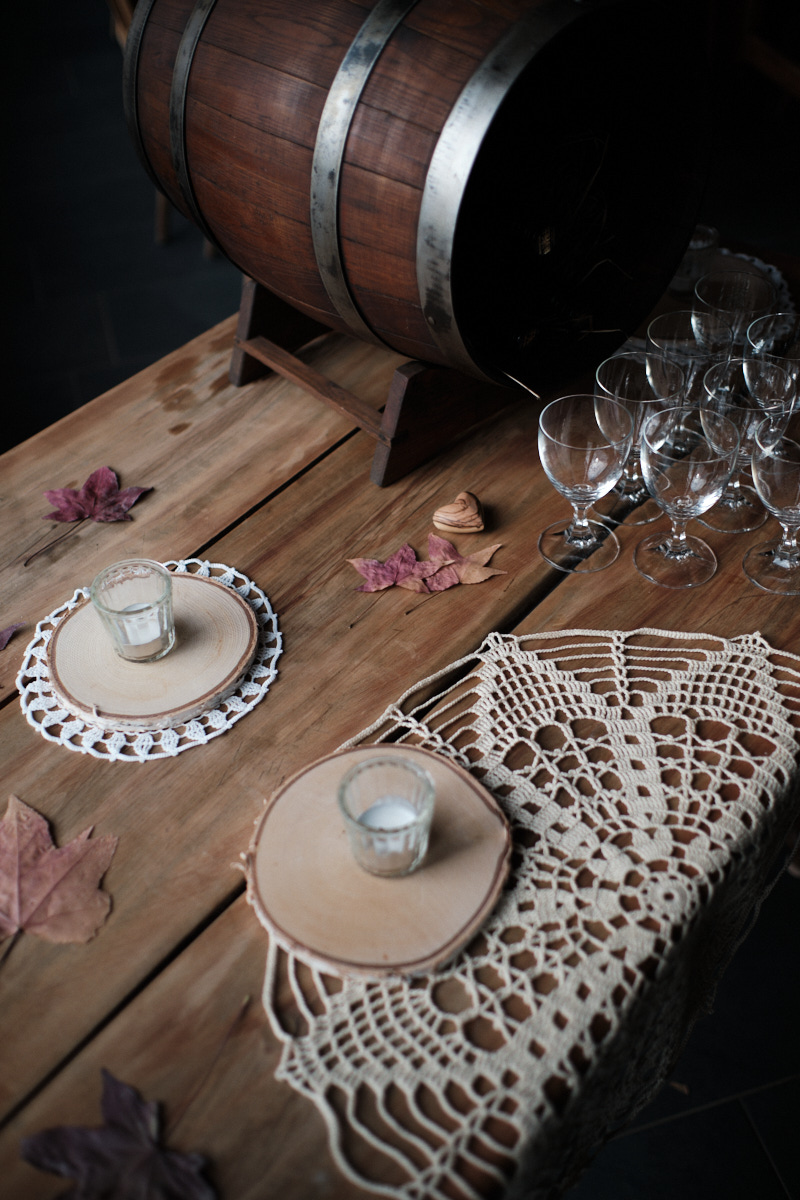 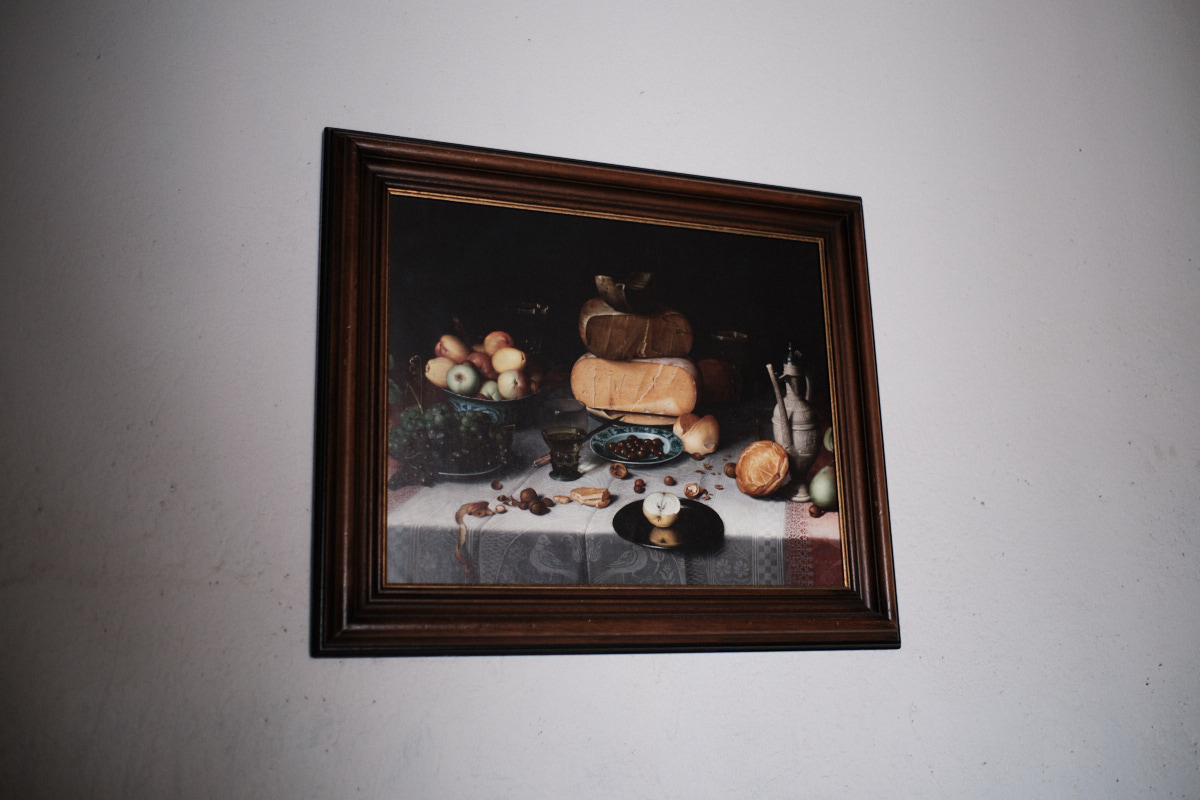 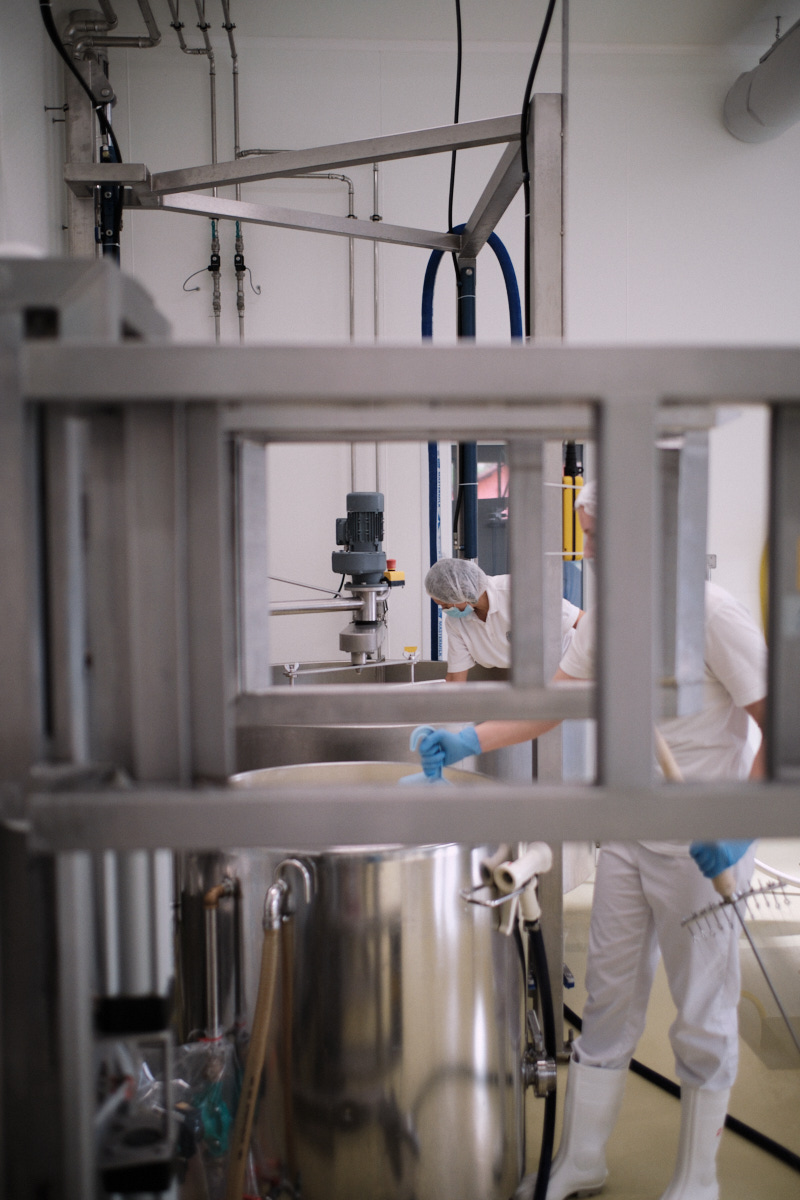 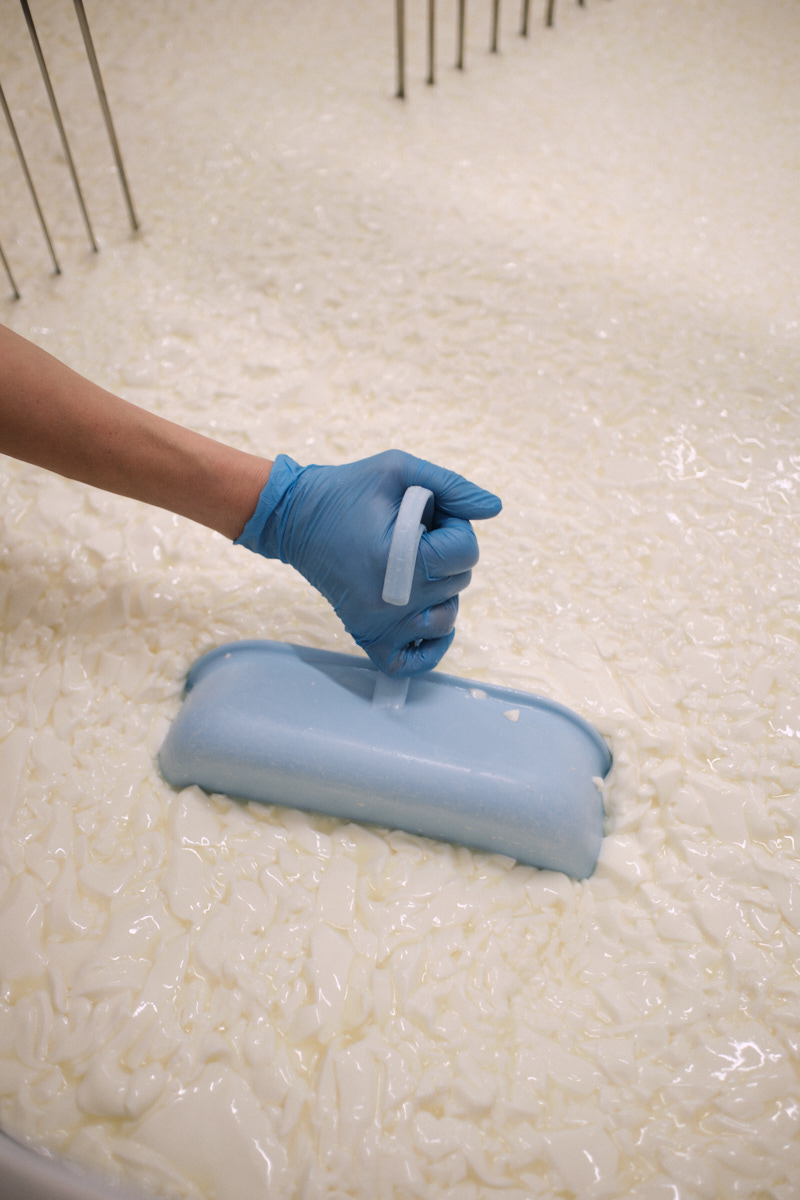 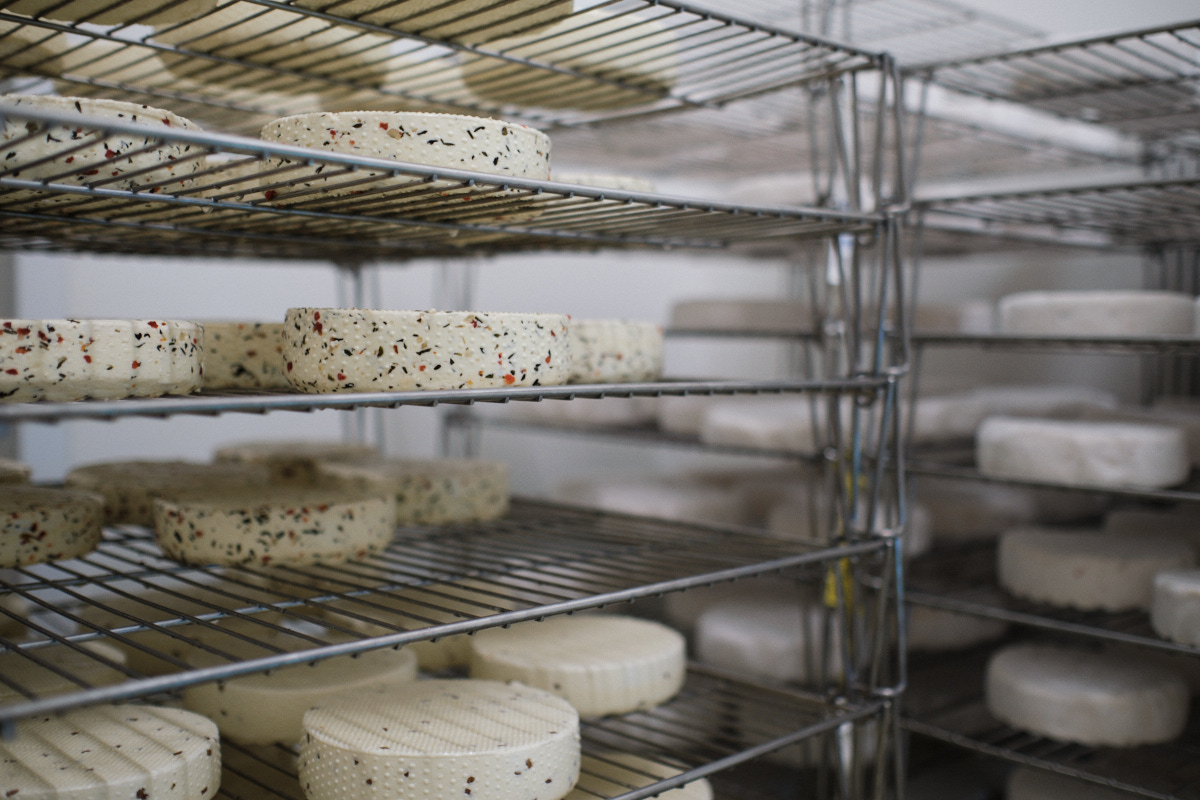 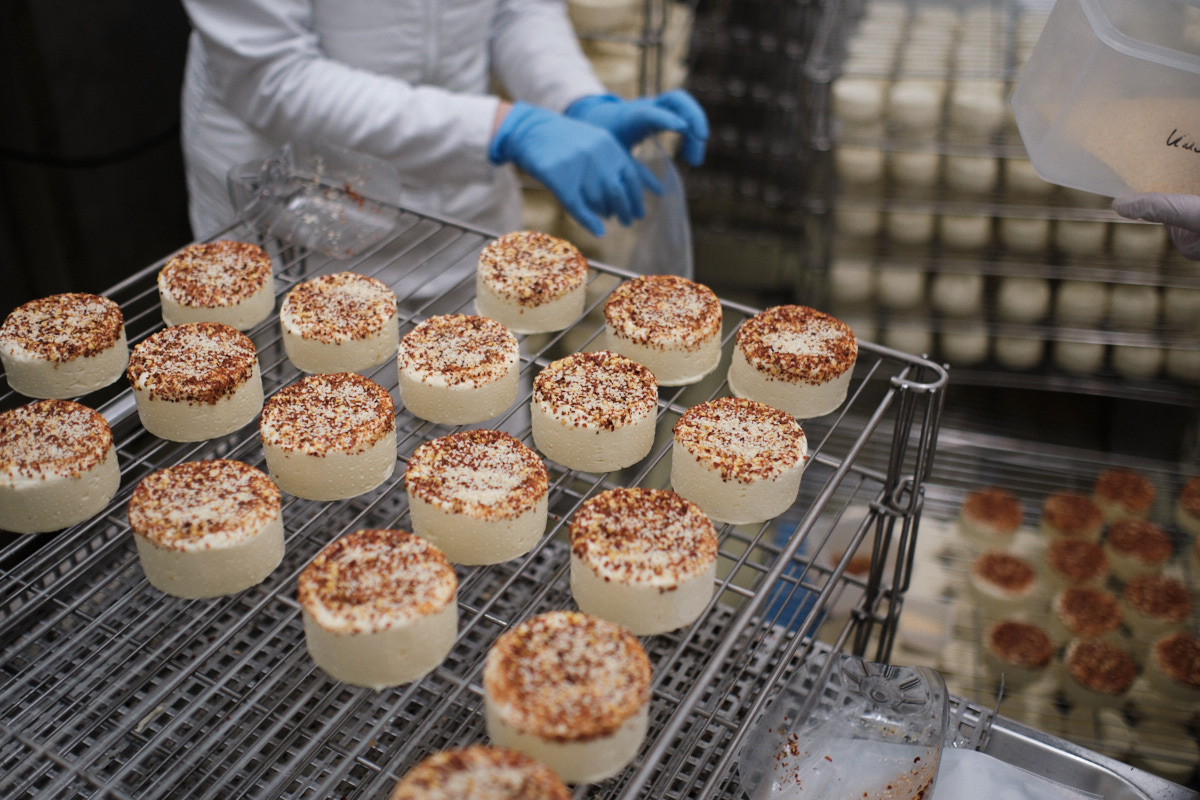 She shares the function of head of the cooperative with her husband, who manages the Adelsheim-Boxberg church district and is hence the dean of what is perhaps the most rural part of the Evangelical Regional Church. What drives her? “My gratitude to God,” Ursula answers simply—gratitude for her life and for her four healthy children. She gently pulls the scoop out of the milk that was enriched with cheese dairy cultures in the morning to ferment the lactose into lactic acid, before the rennet was added to the milk. Rennet is an enzyme from the stomachs of young calves, sheep and goats that turns milk into soured milk.

A local organic farmer came at seven in the morning to fill fresh milk from a tank into the stainless-steel container, the “Pasteur” kettle. Ursula explains: “Each milk load is different.” She has pinned up her fine grey hair under a hairnet, while she keeps her eyes on the container. Milk transforms with the seasons. Sometimes it takes longer to become thick. And usually, it tastes of the grass sorts the cow has eaten. Each load of milk contains something characteristic to the animal, in whose cells the milk was produced. 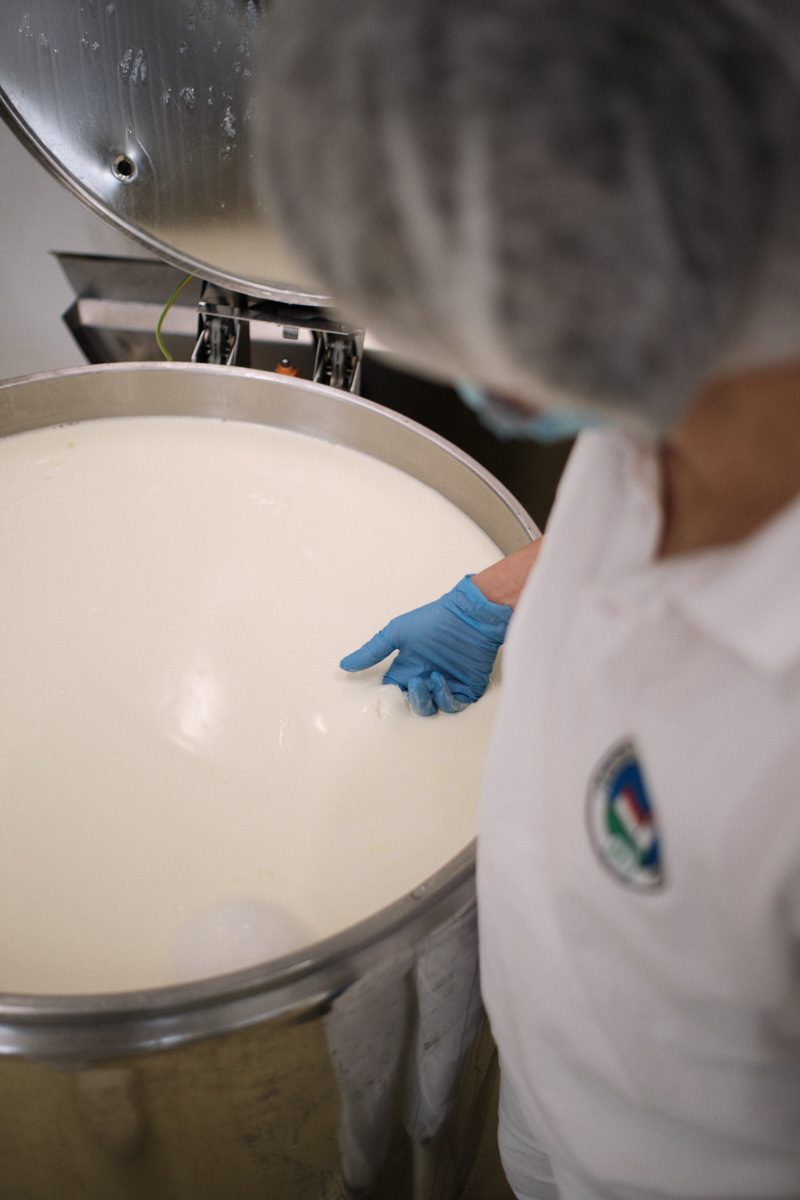 In another container an employee cuts the “Gallerte” mass—more coarsely to make softer cheese, semi-hard hard cheese that exudes a slightly sour smell. Ursula puts the scoop aside. The cutting process takes only ten minutes, but timing matters a lot. “Hard cheese becomes more solid and soft cheese too dry if we are too late.” Cutting the milk into cubes, the “curd-making”, is deemed the most important step of cheese processing and highlights yet another important ingredient: manual dexterity. 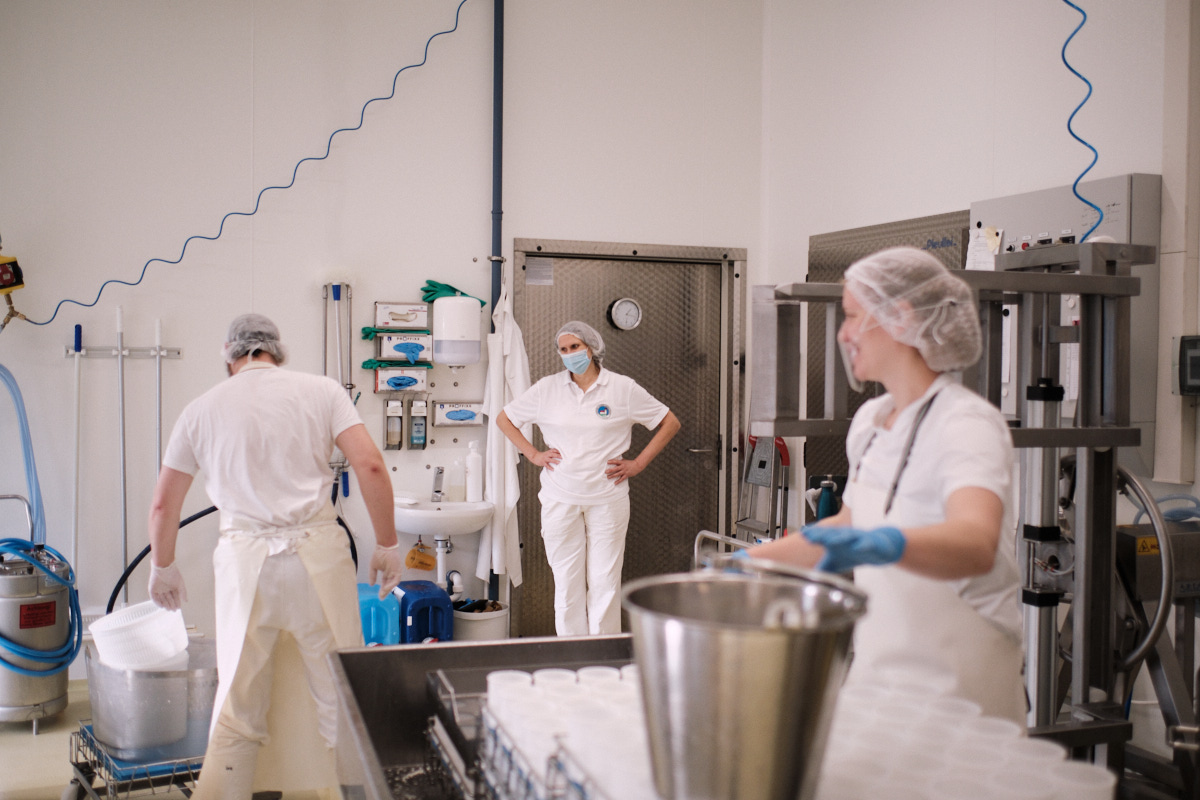 The cheese dairy is a cooperative association, in which people with and without disabilities work together.

Later, Ursula carefully scoops the curd from the container into white plastic buckets. She turns it and presses the whey out, so the cheese doesn’t become too “chalky.” Over the course of a few hours, she will keep stirring the mass regularly so it doesn’t go lumpy. “Tomorrow morning we will salt the cheese—by hand.” Then it must ripen for six weeks to become raclette cheese. This happens in the ripening chamber next to a large container in which mould cheese is mixed with salt. It becomes very obvious: A number of tasks have to be performed simultaneously. 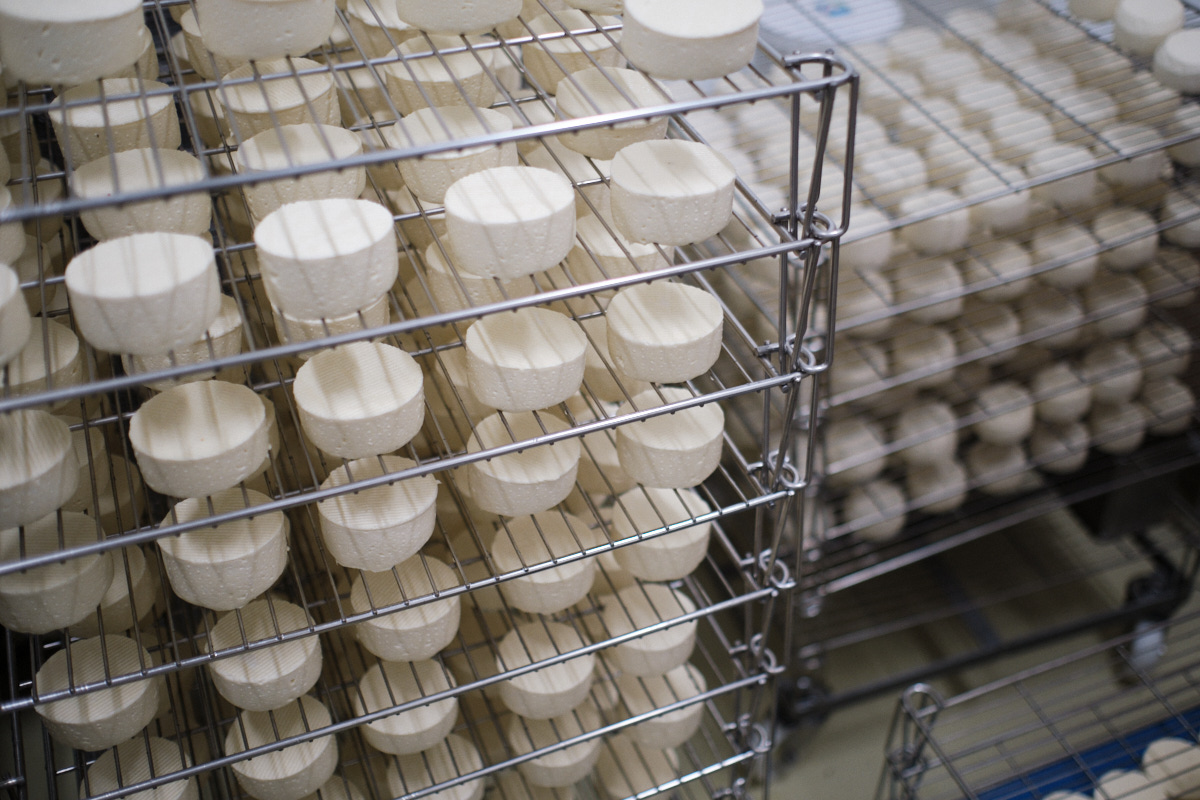 In the ripening chamber.

Dozens of roundish cheese loafs line up in the ripening chamber—exuding their very own pungent odour. They are brushed and treated with red-fluid bacteria every day, giving the cheese its dark-orange colour and strong taste and protecting it from other bacteria. “Cheese-making is a bit like performing magic,” says Ursula and smiles at the sight of the loafs. It is such a variety that comes from one and the same ingredient. “Sometimes we change a tiny detail only, and this changes everything.” 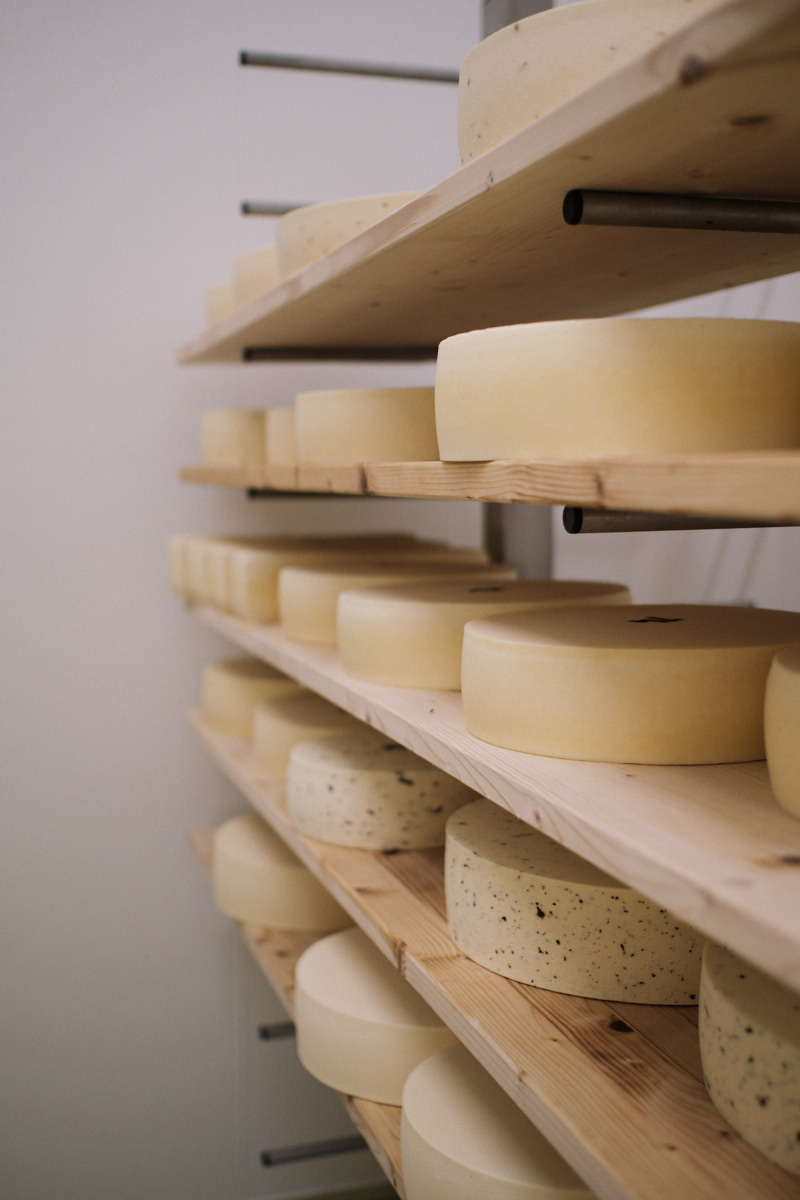 All cheese varieties are certified as organic.

The Kirchenkäserei cheese dairy offers four basic varieties—all of which are certified as organic. They are sold in their plain version or improved with chilli or herbes de Provence. The soft and hard cheese varieties are sold in organic food stores, butcheries, supermarkets and on weekly markets across the region as well. Small quantities of curd and yoghurt are sold directly at the dairy shop. “Cheese-making has become a vocation for me,” says Ursula. Her next goal? A flock of sheep. For Sindolsheim sheep’s milk cheese, of course. “But to every thing there is a season,” she says, walks through the hygiene lock, takes the white, bulky slippers off and closes the heavy stainless-steel door behind her. 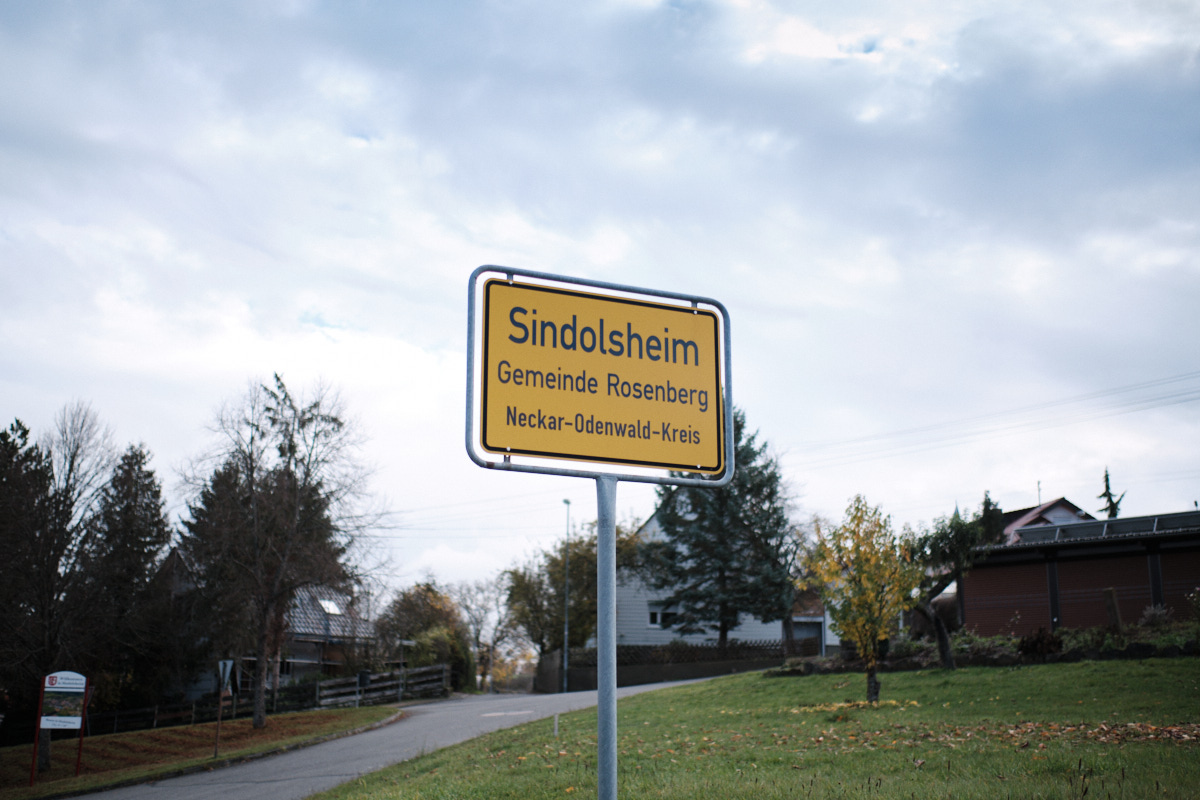 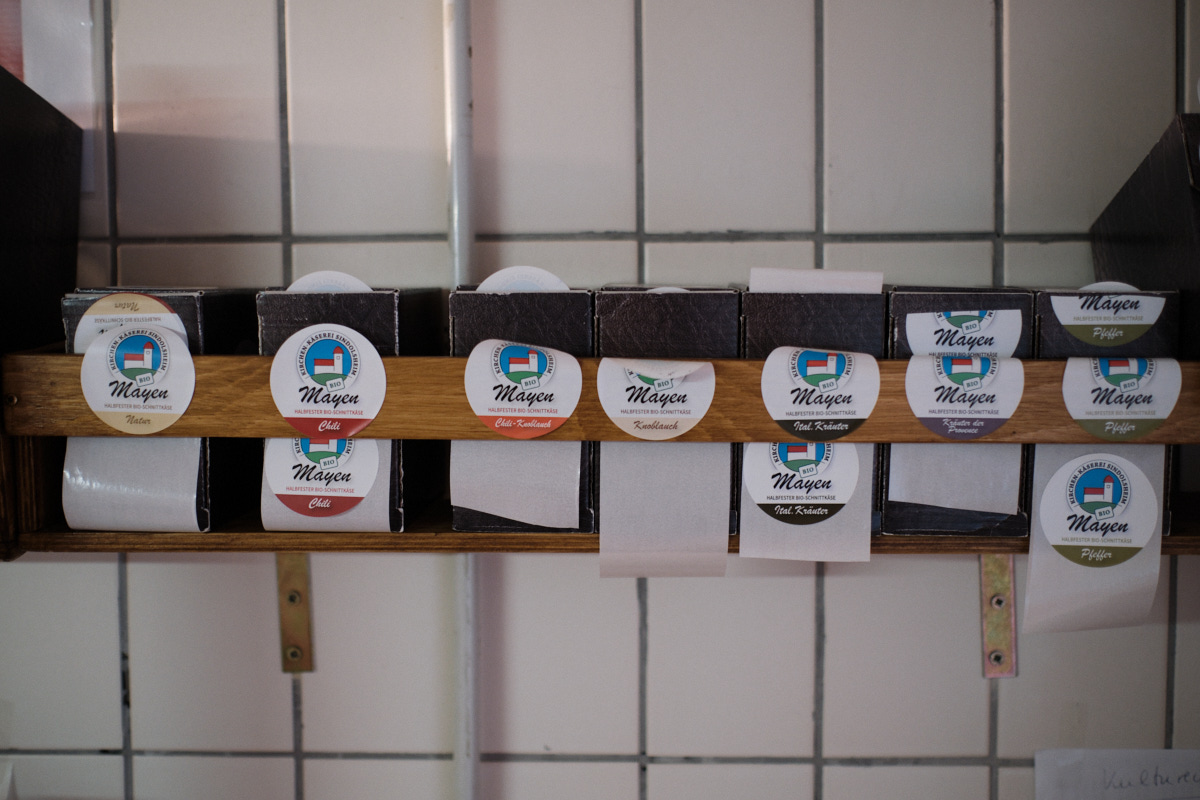 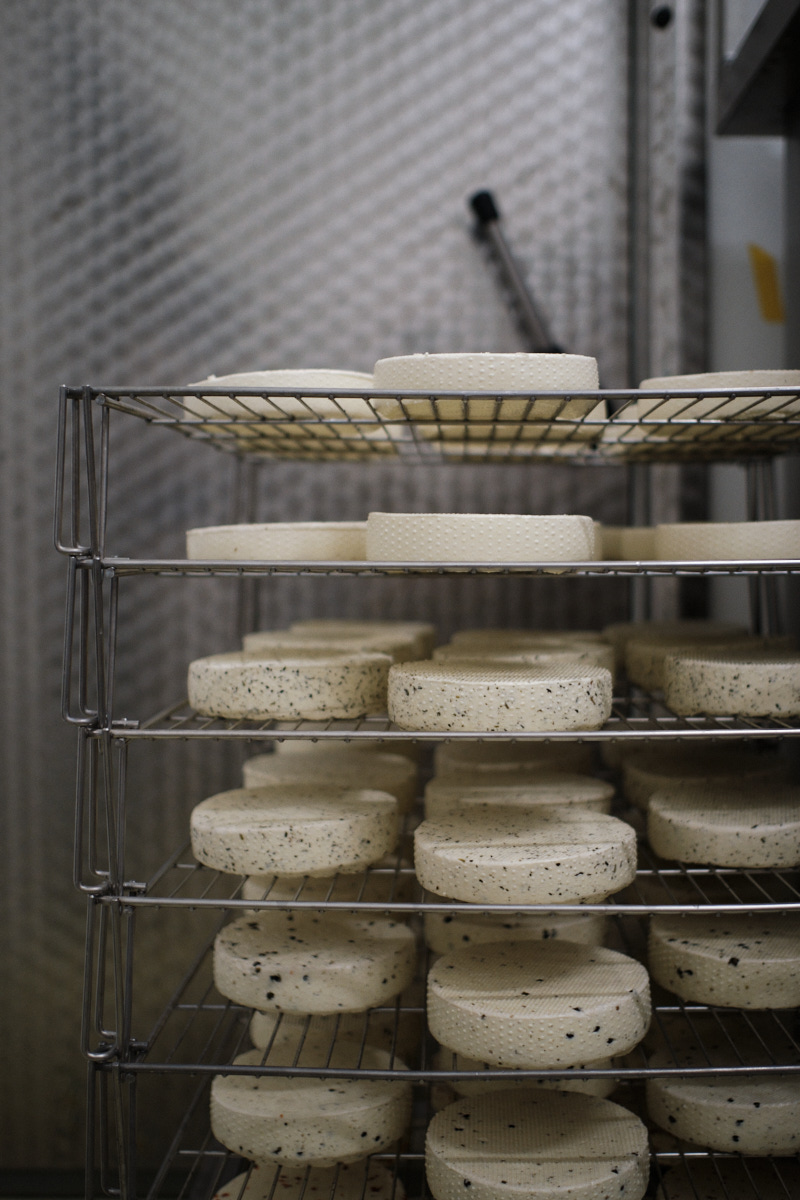 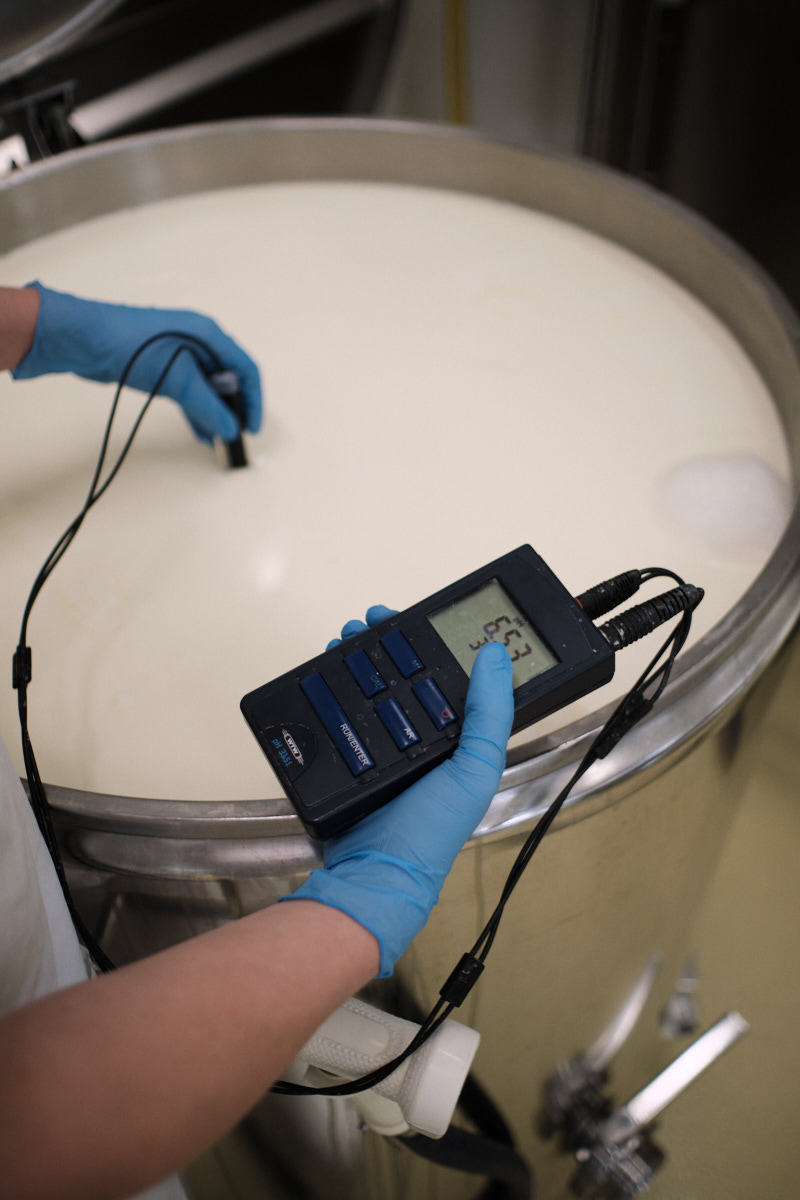 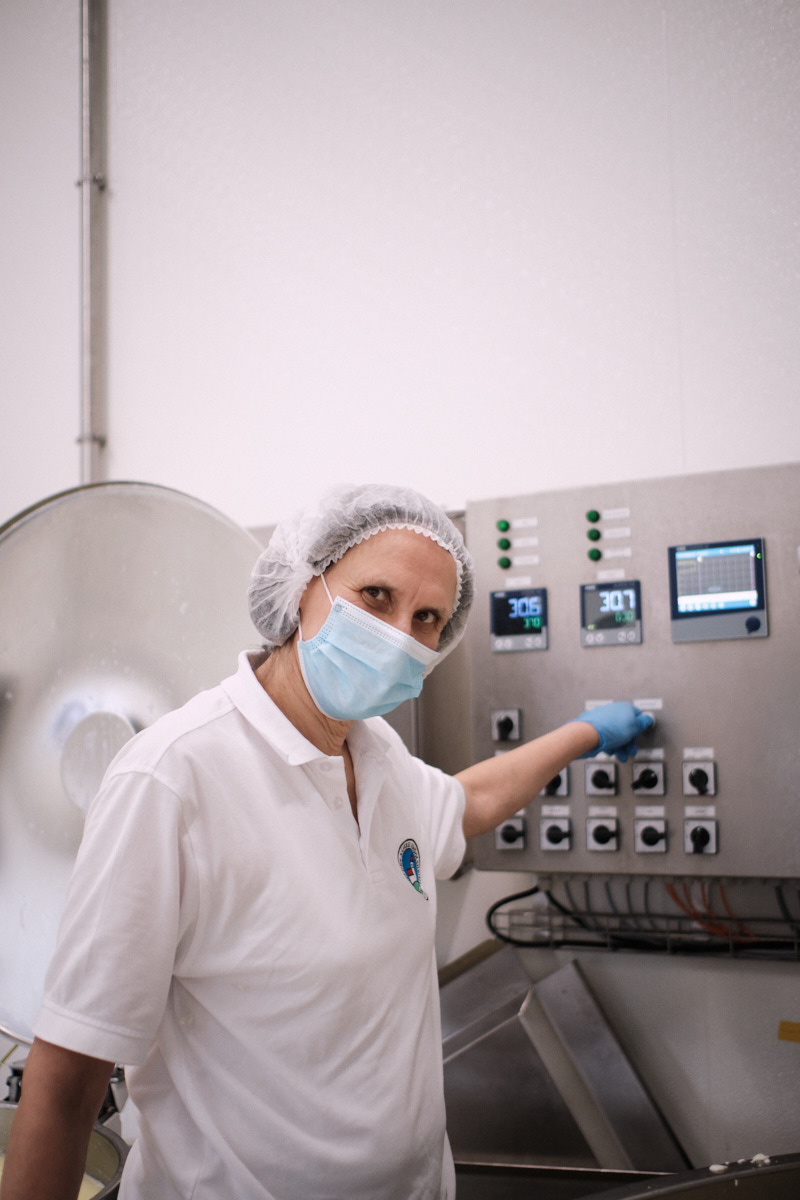 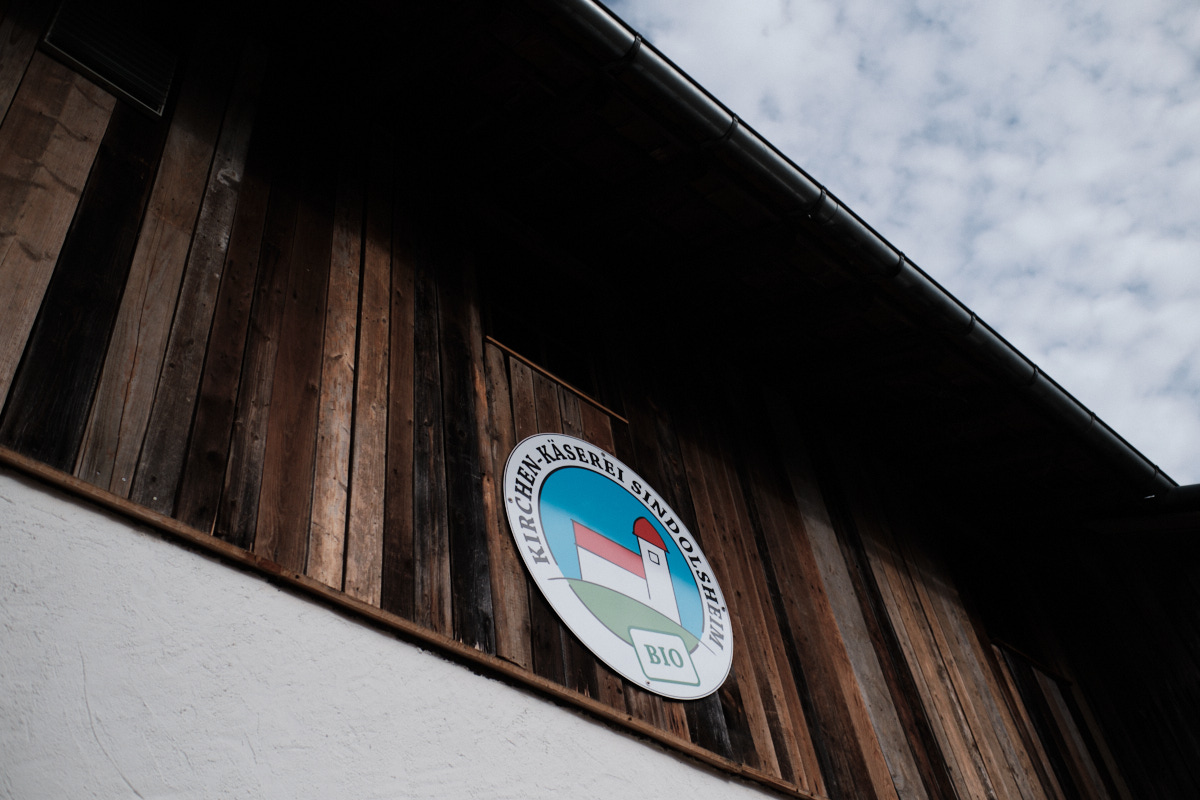 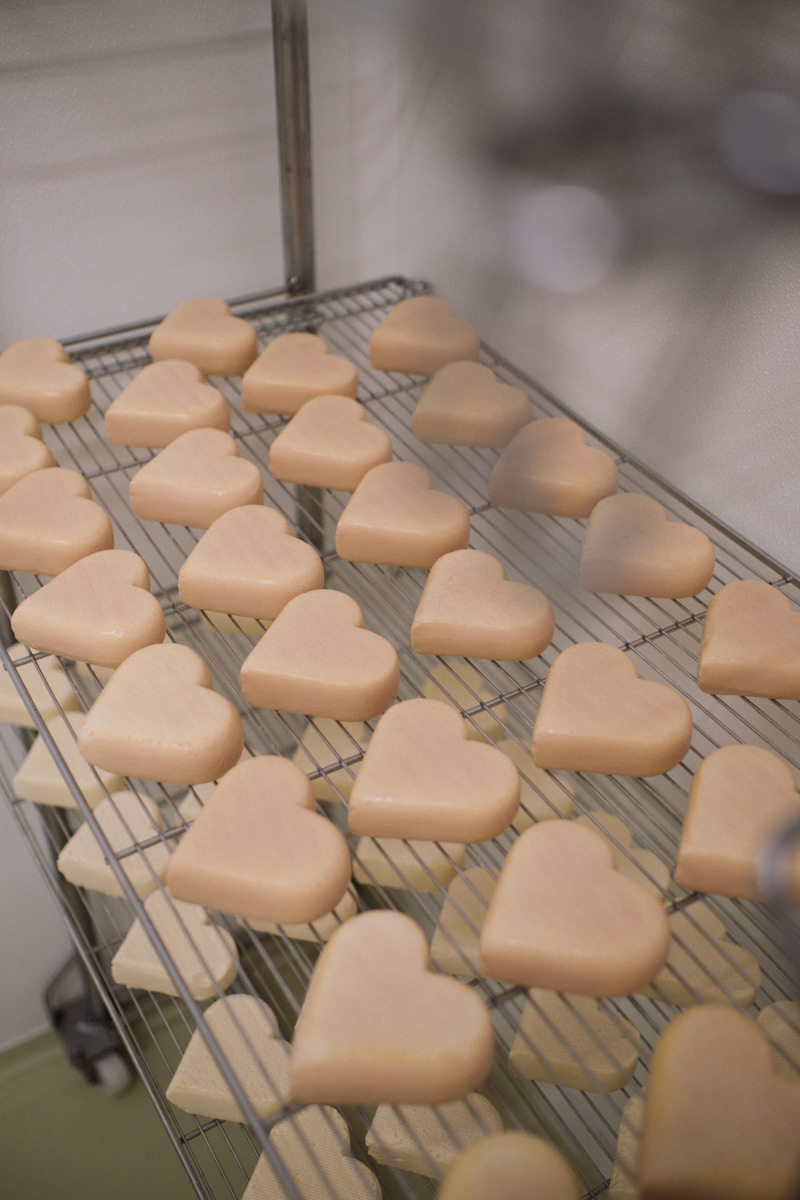 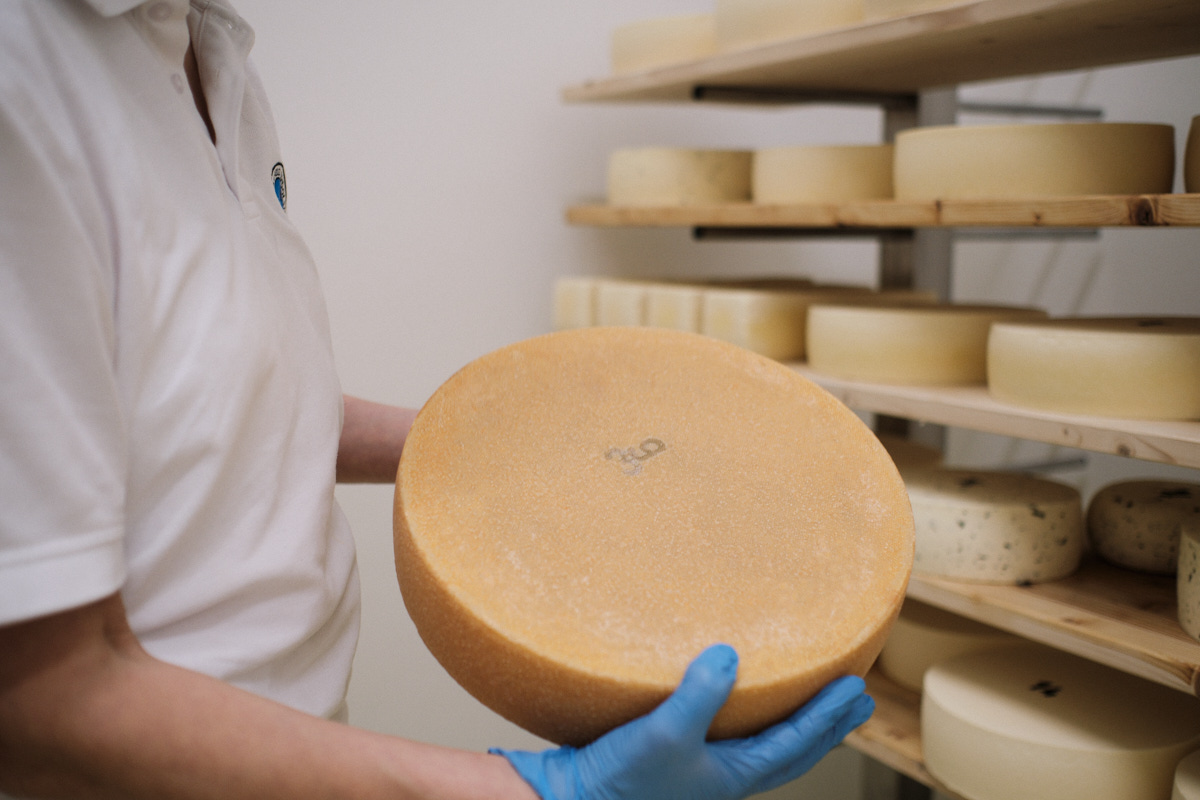 Get a true feel for the Odenwald

Margarete Sauer makes us feel, smell and taste the history of the Odenwald open-air museum in Gottersdorf.