Siegfried Brenneis loves Stollen. And he makes the sweet bread as delicious as hardly anyone else can make it. The master baker and confectioner from Mudau in the Odenwald has been presented with a number of awards for his products. Every year, he presents a new collection. This is a tasty tour through his bakery.

It is the ingredients that inspire Siegfried Brenneis to produce Stollen sweet breads. Some of the most important ingredients are lined up in front of him: candied orange and candied lemon peels, raisins, vanilla, cardamom, cinnamon. “I always loved the presence of these special spices around Christmas—fine ingredients that you don’t normally use throughout the year.” He began to experiment with them and tried out various mixtures creating new variations of Stollen every so often. Then in 1992, he took part in the Stollen competition of the Buchen-Mosbach bakers’ guild submitting his first specimen and he won bronze. He competed for another five years with a total of ten varieties—and won gold ten times. “Well, I somehow stepped up my game each time then,” he says and grins.

He still loves the ‘king of Christmas cakes’ as he calls the fruit bread, even after so many years. Made of sweet yeast dough and a thick layer of powdered sugar it is symbolic of the Christ child wrapped in swaddling clothes. The ‘Stollen collection’ made by Siegfried is different each year. In 2021 he offers seven types of Stollen in his Bäckerei Münkel / Burkardt shop in Mudau-Schloßau. Among them there are a smaller, children’s variety with chocolate chips instead of raisins, a juicy poppy-seed variety with a sugary crust, a variety with almonds and a marzipan rope in the middle and, of course, the Odenwälder Butterstollen classic variety that just can’t be missing.

Siegfried always knew he would become a baker one day. “I never even considered pursuing another profession.” At his childhood home in Scheidental, which is part of the municipality of Mudau, there was an old wood-burning oven behind the house. His mother used to make their bread herself and Siegfried lent her a hand already as a little boy. “That smell of freshly baked bread when it comes out of the oven still reminds me of my childhood.” He loved helping out, not least because keen helpers were awarded with the heel of the freshly baked crusty loaf, which was even still warm. 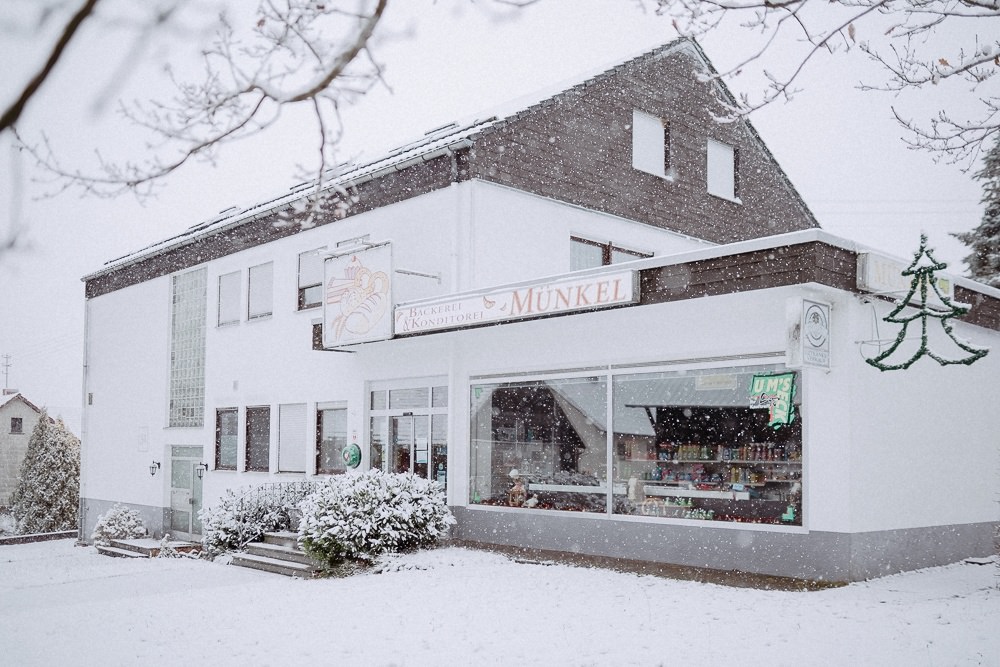 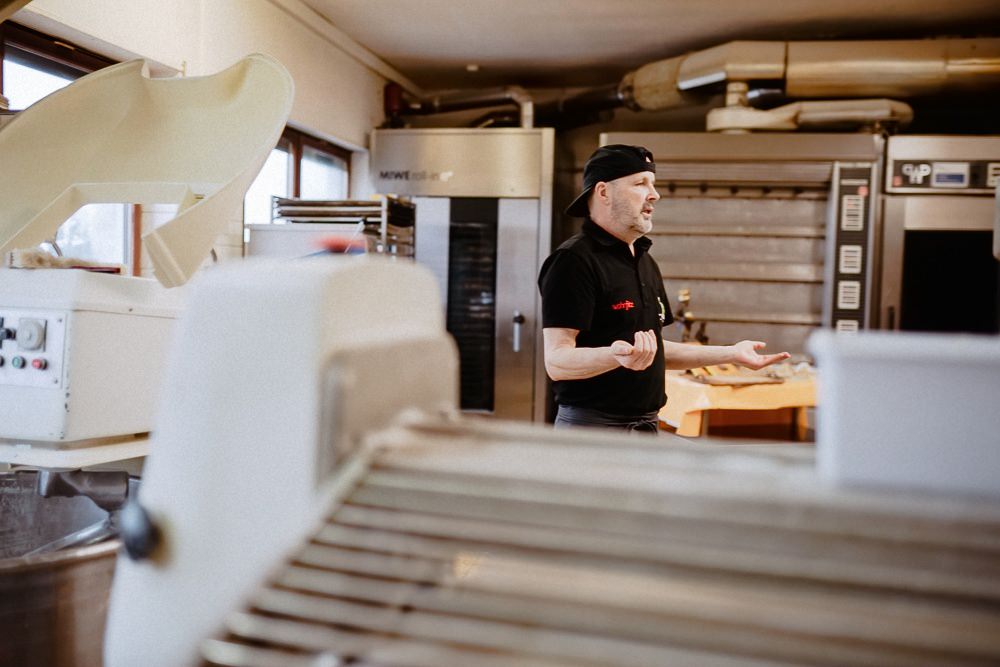 In 1980, Siegfried began training in the bakery. 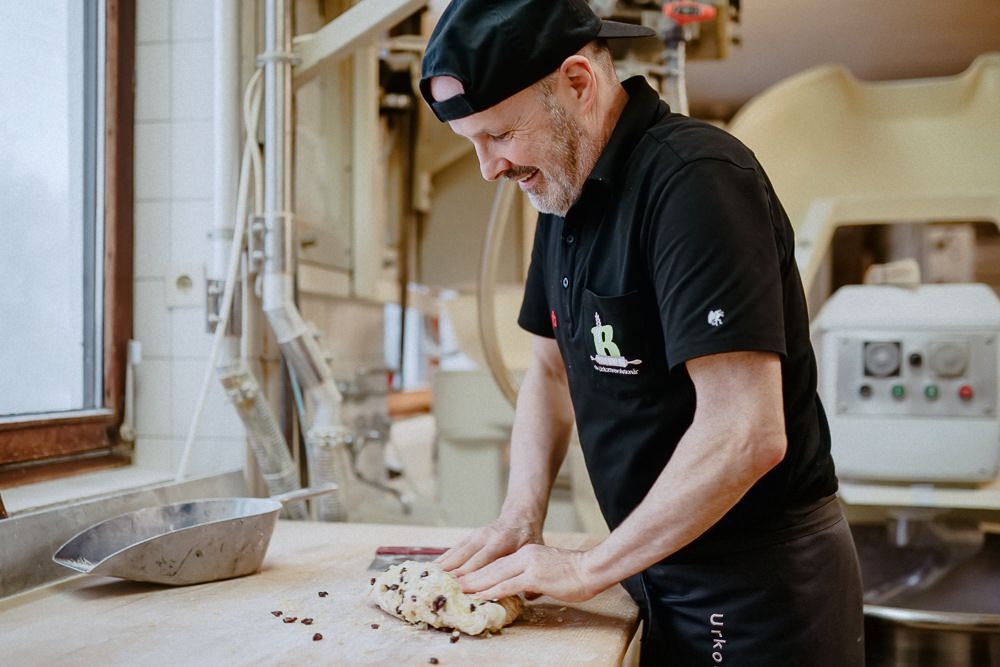 It is the ingredients that inspire Siegfried Brenneis to produce Stollen sweet breads. 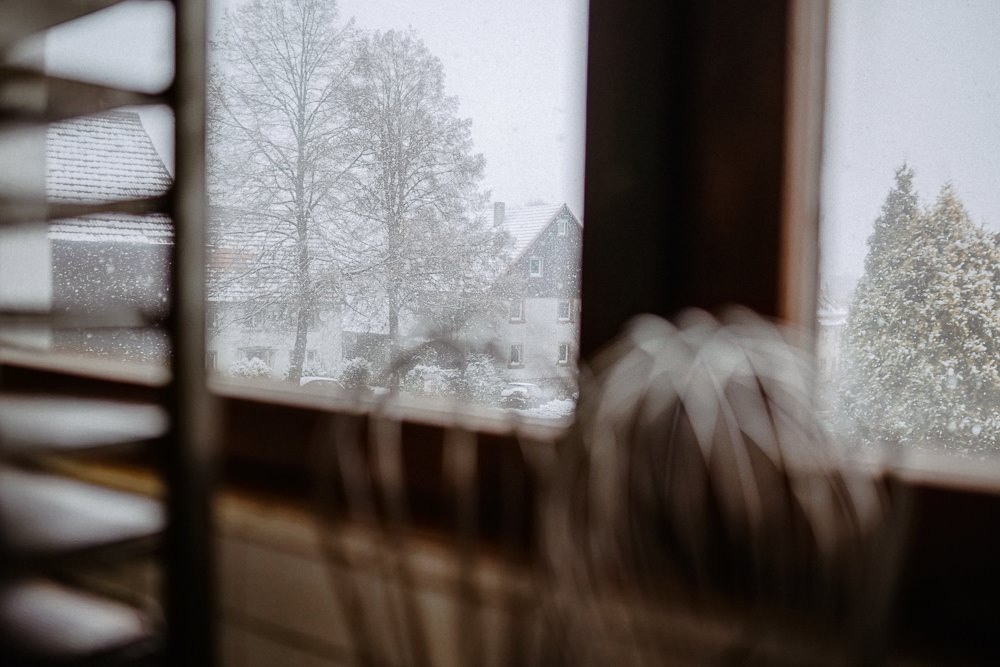 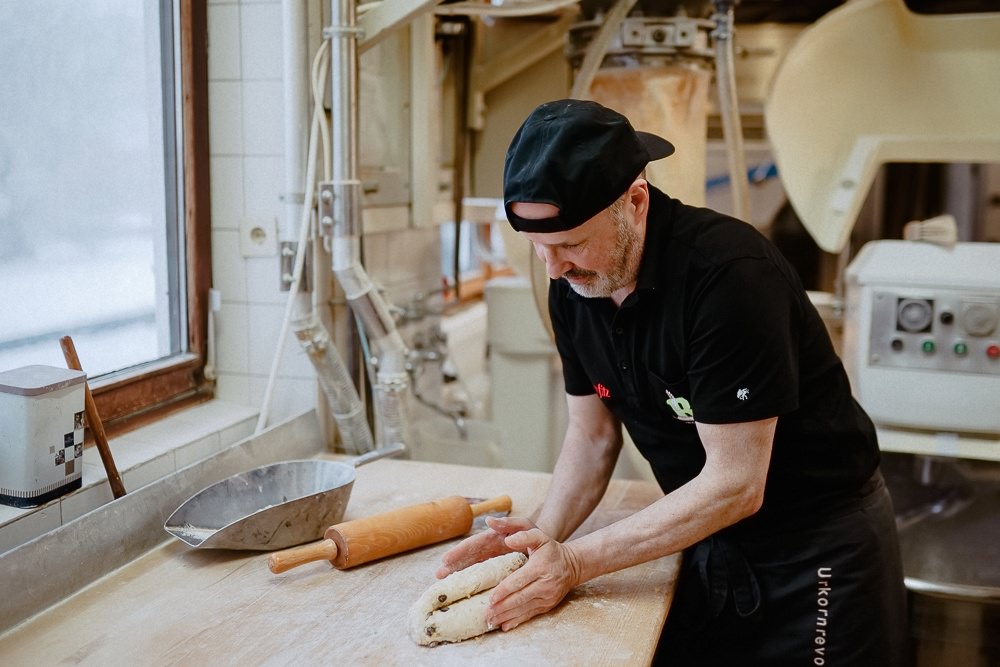 Siegfried always bakes his creations in the afternoon... 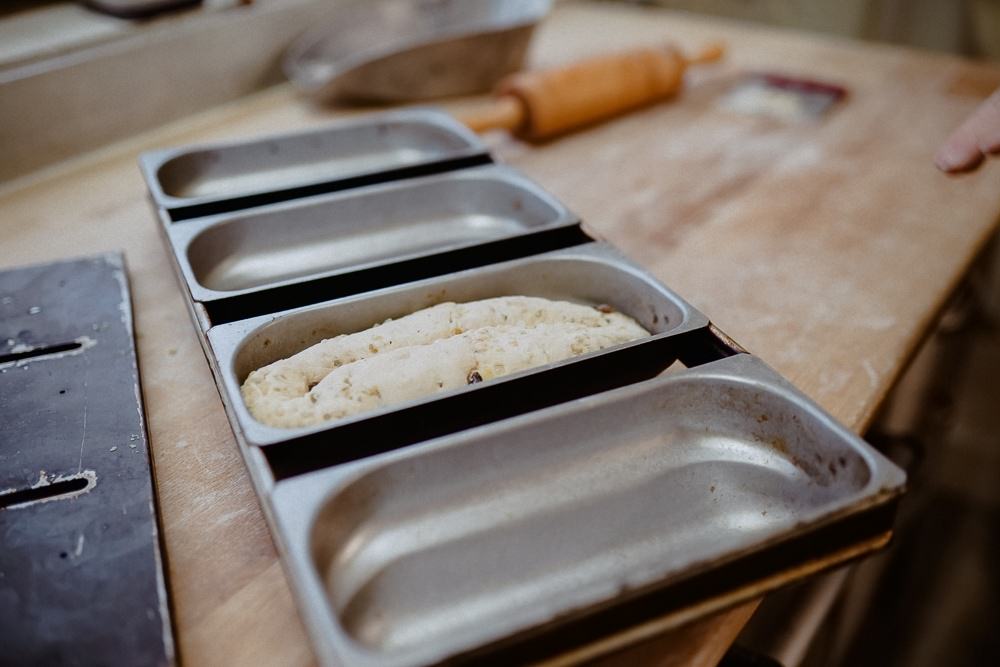 ...never during the busy production routine in the mornings. 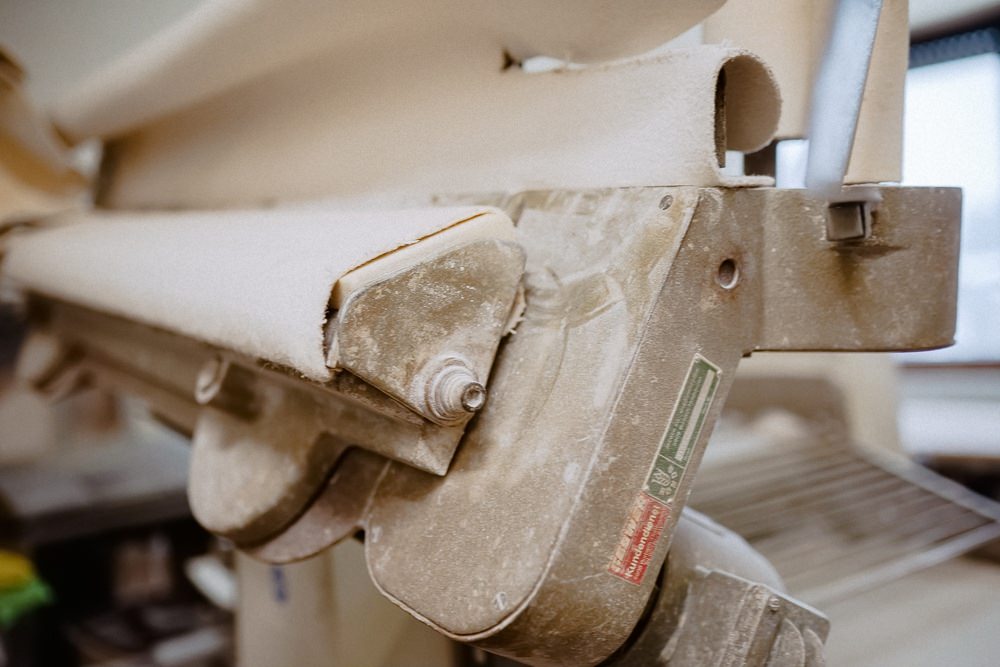 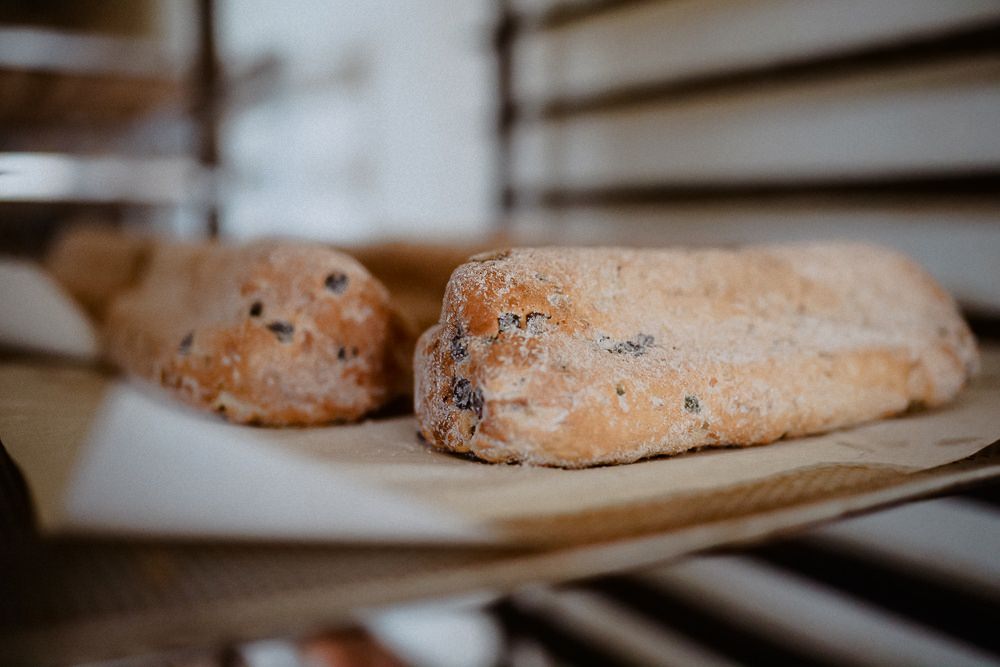 In 1980, he began training in the Münkel / Burkardt bakery in the neighbouring village. He went on to work in Mosbach, Neckarelz and Heidelberg and returned as a master baker and confectioner. He has run the bakery since 1992 and was never really drawn away from the Odenwald, at least not for a long time. “I am deeply rooted here.” He talks about his trips to Tokyo or Rimini. “Sure, that was all pretty nice; however, it’s absolutely not my world.” He loves the tranquillity of the Odenwald, the manageable size—it’s never far to the edge of the forest. This is where he can always go for a walk to unwind.

For the children, I was simply Stolli

Siegfried’s diary is full of appointments. He has been a baker both as a profession and in his leisure time for a long time already. When local competitions no longer posed enough of a challenge for him, he went looking for the next kick. So he competed in the Zacharias-Preis, also known as the Oscar of Stollens, which is awarded for first-class bakery in combination with creative marketing ideas. Taking part for the first time, Siegfried created the children’s Stollen variety for this competition. And he made a Punch and Judy show and performed it in the local nurseries. “For the children, I was simply Stolli,” he laughs.

More competitions followed, such as the Roggen-Grand-Prix. The baker from the Odenwald finally joined the German Bakers National Team and captained it for twelve years. Today, he even coaches it. The world championships led him to France, Portugal, the US and Japan—and he led his team to victory several times. “Competitions inspire me. They force you to leave familiar paths and try something new. I have fun doing that.” And he takes many things he does or sees during the competitions back home and integrates them in his work routine.

Siegfried has become well known, more and more through each competition. “One day, the first publishing house contacted me and asked me if I’d like to write a book.” This was a great opportunity for him to immerse himself in a topic he cares about a lot: ancient grain types. “The overbred wheat used largely throughout the baking industry is of rather mediocre quality in terms of nutrients,” he explains. Ancient grain types like Einkorn or Emmer have a lot more to offer. The same applies to his favourite cereal: spelt. Siegfried also likes to use Grünkern. This is spelt harvested in a half-ripe state, a typical grain of the Odenwald. “Processing these natural grain types is a bit more time-consuming, but it’s really worth it. They are richer in taste and their nutritional value is better.” With his book, he wants to shake up the industry and demonstrate the high potential of older grain types. Of course, he has also created a Stollen variety made of his favourite grain: the Odenwald Spelt Stollen.

Standing still is not really his thing. Siegfried constantly adds to his skill set: to become a business manager in his trade and a nutritionist in bakery, because an increasing amount of customers with allergies and food intolerances come to him. “I found it important that we react adequately and also that our staff can inform customers accordingly.” In the small village bakery in the Odenwald, there is always bread for people with wheat or lactose intolerance.

I am really a bit mad – about Stollen!

Siegfried likes to pass on what he knows to others. He does this through his books or directly to apprentices and in training sessions designed for professionals—but also to amateurs. In the Breadmania Facebook group, he chats with amateur bakers regularly to give them tips and also to take suggestions home for himself. “Those people try out things that I, as a professional, would never come up with. And sometimes it just works!” He wants to keep his mind open. No arrogance!

It has started to snow and the flakes are getting thicker and thicker. Siegfried stands close to the window in his bakery and flings flour on the work surface with great panache. He picks some candied orange and lemon peel, weighs the amount in his hands, sprinkles it over the dough and then kneads everything vigorously. “You cannot produce a fine Stollen cake when you’re not doing it with passion,” he believes. Now he rolls the dough flat with a rolling pin and folds it over. In this procedure the typical shape emerges. Siegfried always bakes his creations in the afternoon—never during the busy production routine in the mornings. This way he has sufficient time and peace. In 2014, Siegfried was awarded the Honorary Zacharias for his long-standing commitment for the Christmas cake. He points at the figure with the golden hat and laughs. “I am really a bit mad—about Stollen!”

Recipe for a Spelt Stollen (German only). 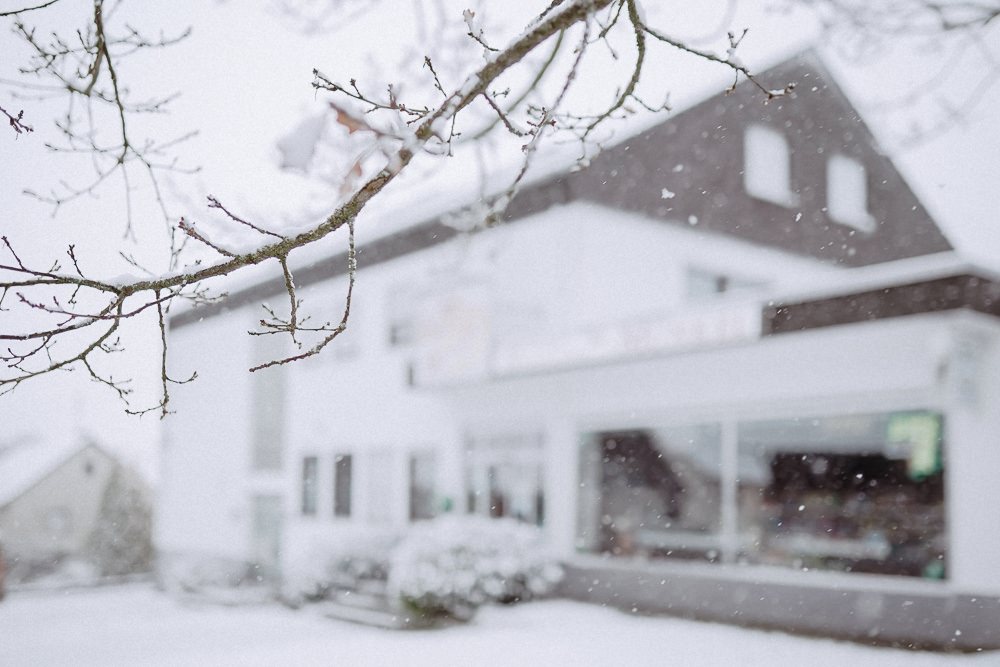 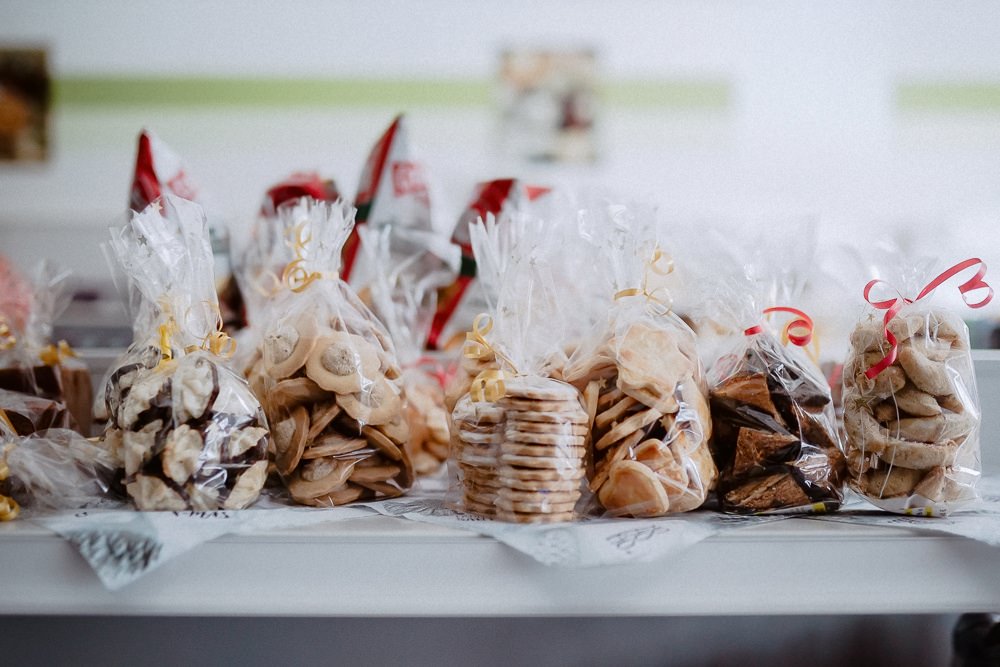 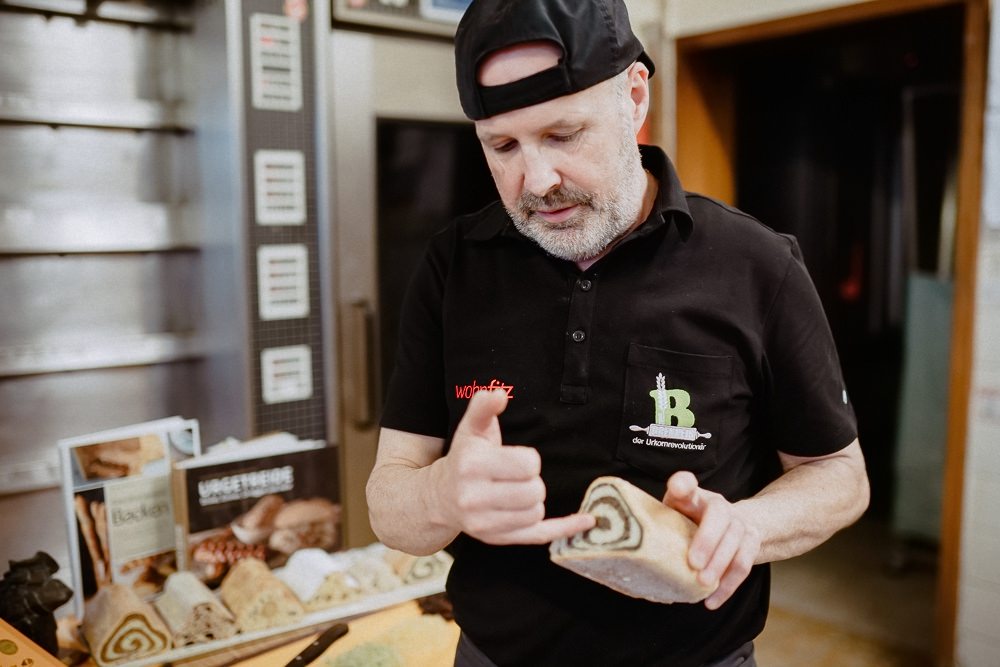 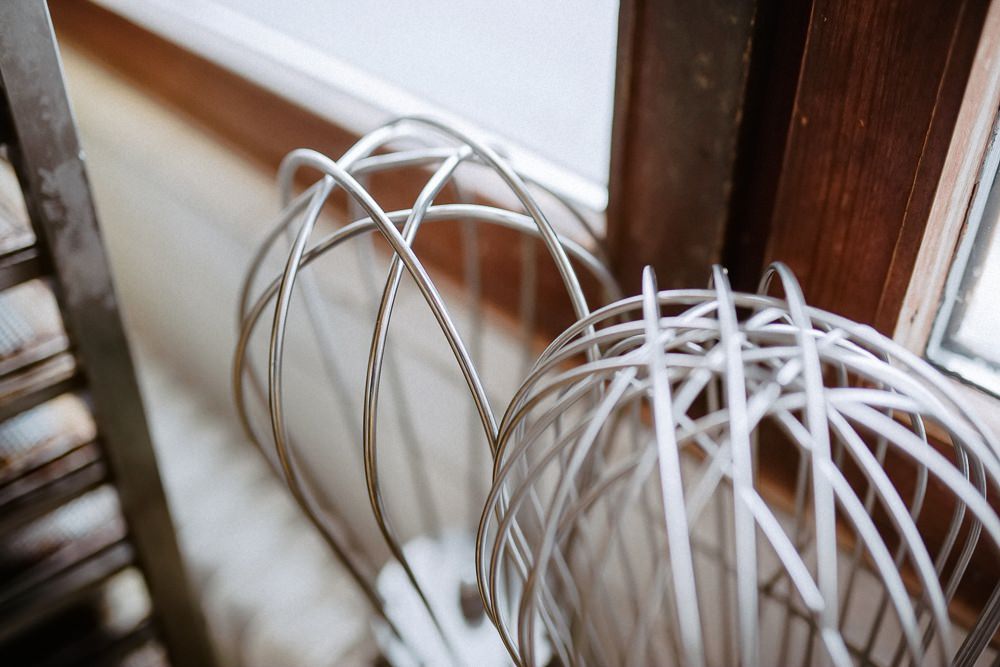 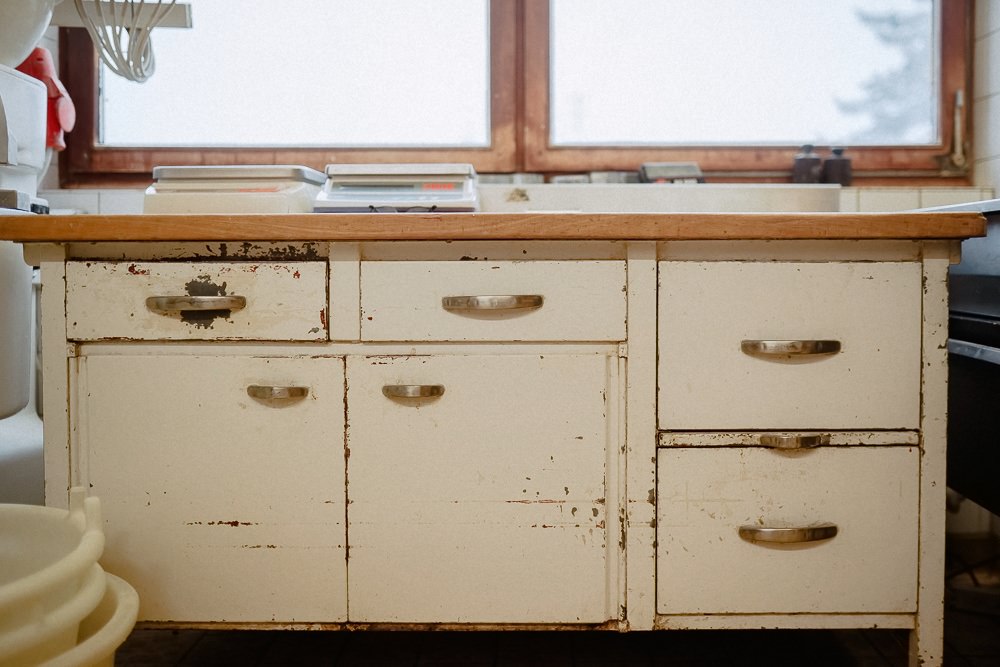 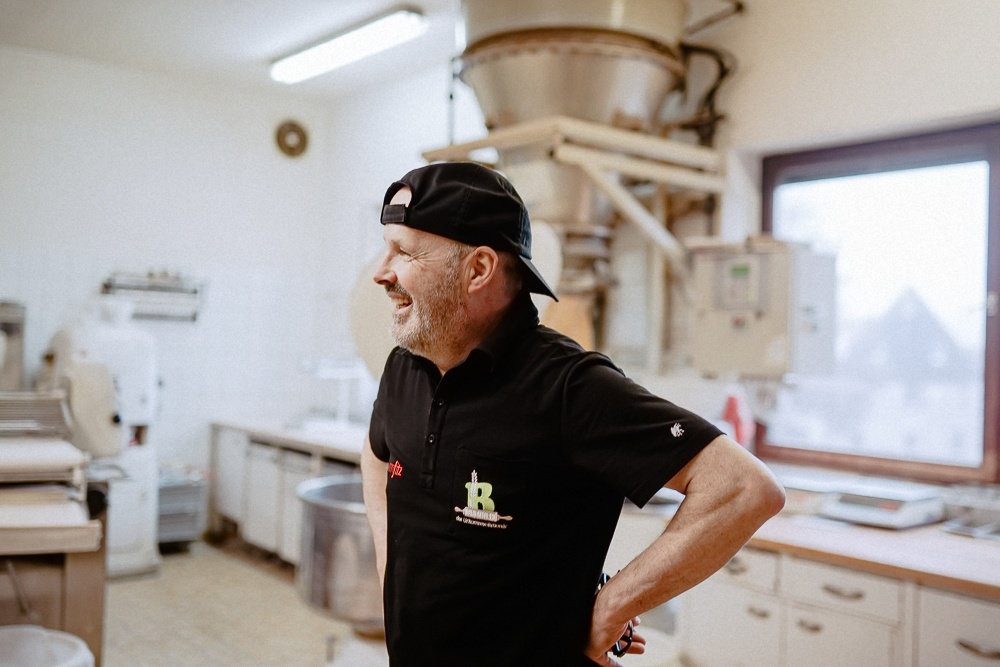 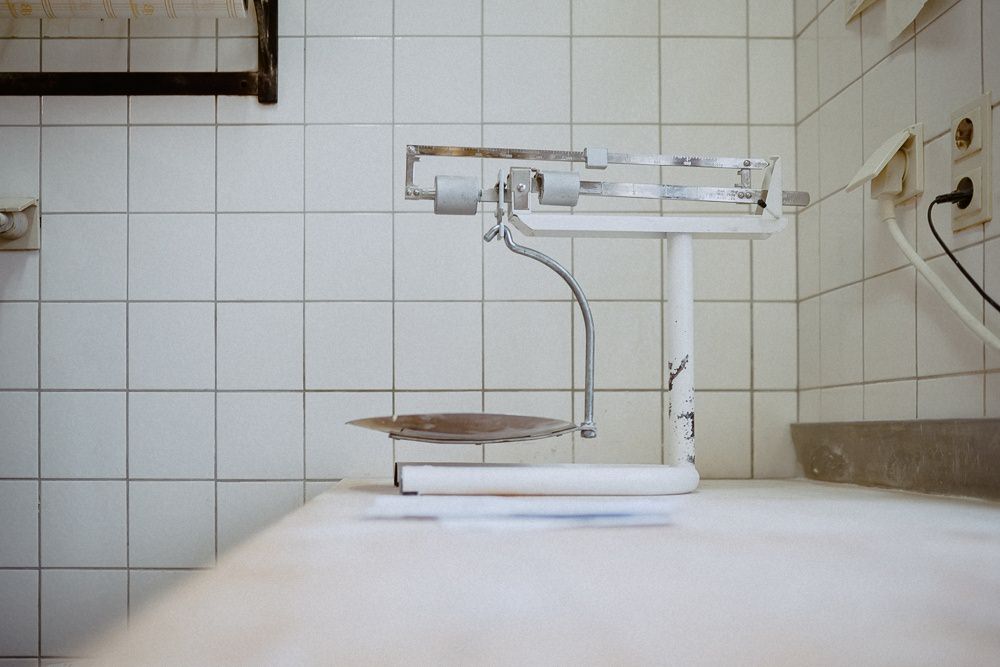 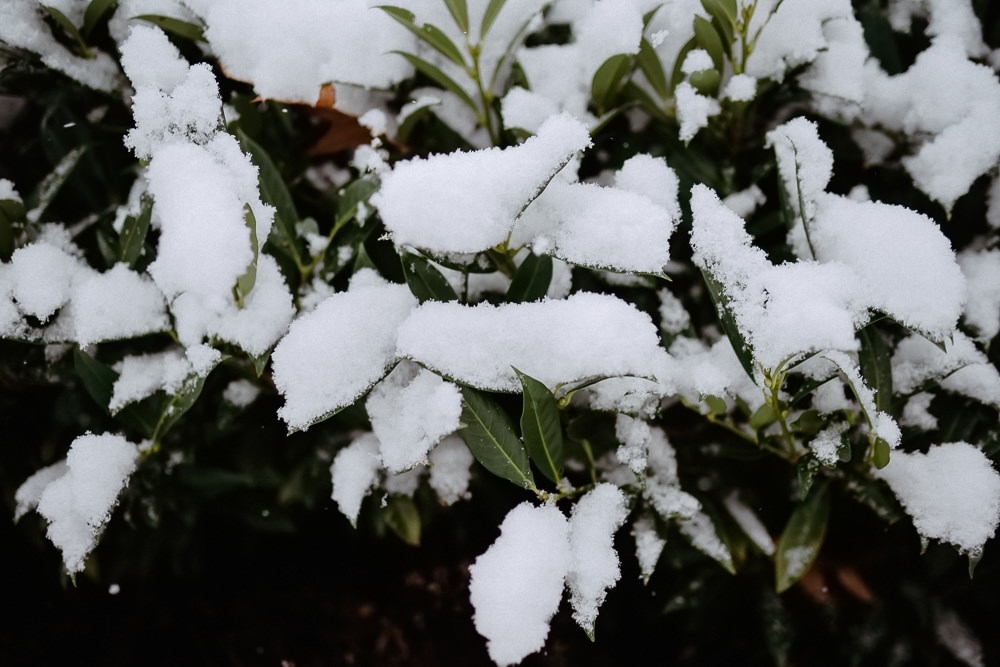