Elastic on the outside, fluffy on the inside, crusty on the bottom—this is how the delicious ball with a traditional pan crust is meant to be. The ‘Yeast Dumplings made in Ludwigshafen-Oppau’ have been produced in Ludwigshafen-Ruchheim, a different suburb of the town, since 2021, but they still look and taste as wonderful as ever. We pay a visit to the frying pans.

It is 7 p.m. on a Thursday and some 3,000 yeast dumplings are to be produced this night, because the Friday’s markets around Ludwigshafen are teeming with interested customers. Heike Fleckner and Steffen Jung stop by to see if everything is running smoothly. Unlike in the past, the two managers now only help out at the stoves when staffing is tight. After all, they regularly turn up between 4 and 4.30 a.m. to prepare the vans for loading and help out.

In the frying shop, things are much like they used to be in grandma’s yeast dumpling kitchen—just that between 1,500 and 3,000 pieces must be produced in a nightshift (of which there are five per week) and that this is quite a challenge in terms of time and organisation. No trace of kitchen nostalgia to be found here. It’d be too much even for experienced housewives if just two of them had to oversee twelve pans on six stoves with five yeast dumplings each that must fry at once. And there is even more to the job: Patricia Hoffelder and Jennifer Göppel, who work the shift today, must also prepare the dough in the machine and shape it into large balls, which are then divided up into pieces by a bread roll machine.

The yeast dough pieces rise on tea towels and in the oven at 50 degrees Celsius (to speed up the process), before they can be fried in hot rapeseed oil doused with salted water—covered with a lid, of course. Obviously, each dumpling must produce a pretty crust. But how crusty is crusty? “Two thirds of our customers prefer a golden-brown bottom,” Heike explains, “and some prefer a dark crust, some even a nearly burnt one.” So, the 17 markets offer fried dumplings with different stages of crustiness. And how long does an average specimen fry in the pan? “About seven minutes,” Patricia knows from experience. “The sizzling sounds that the oil causes in the pan tell me how long it will still take.” Her colleague gives a nod of assent. 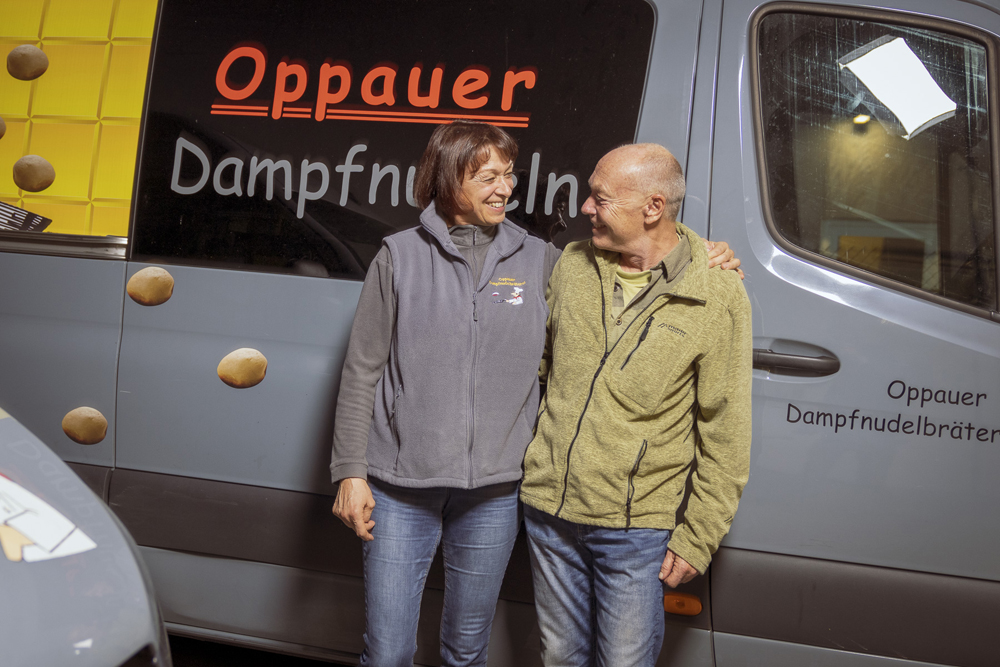 The yeast dumplings from Oppau are now being produced in Ruchheim. 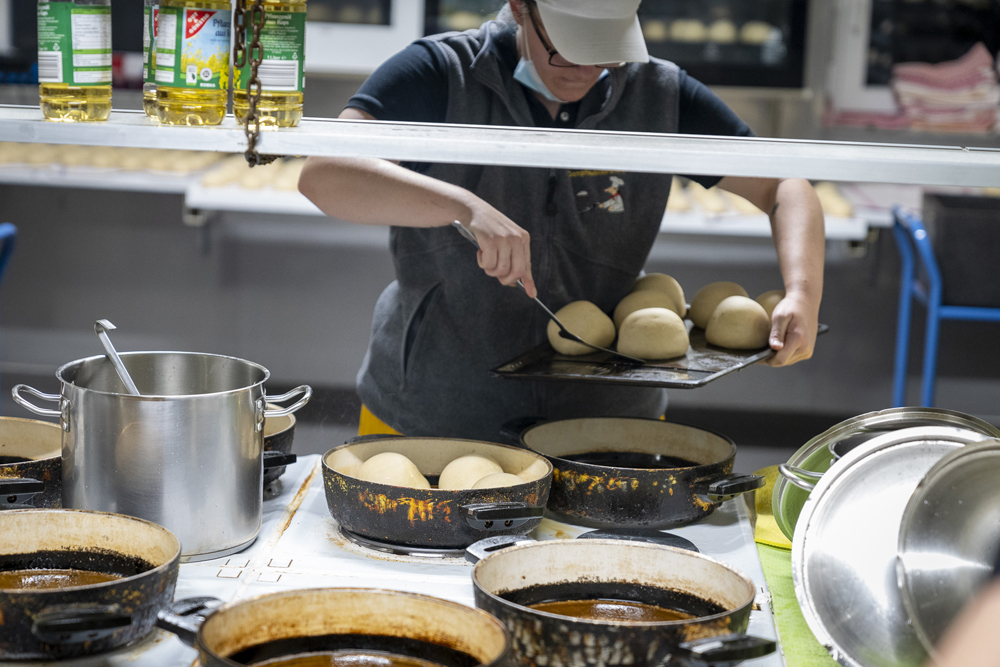 But still according to the traditional recipe. 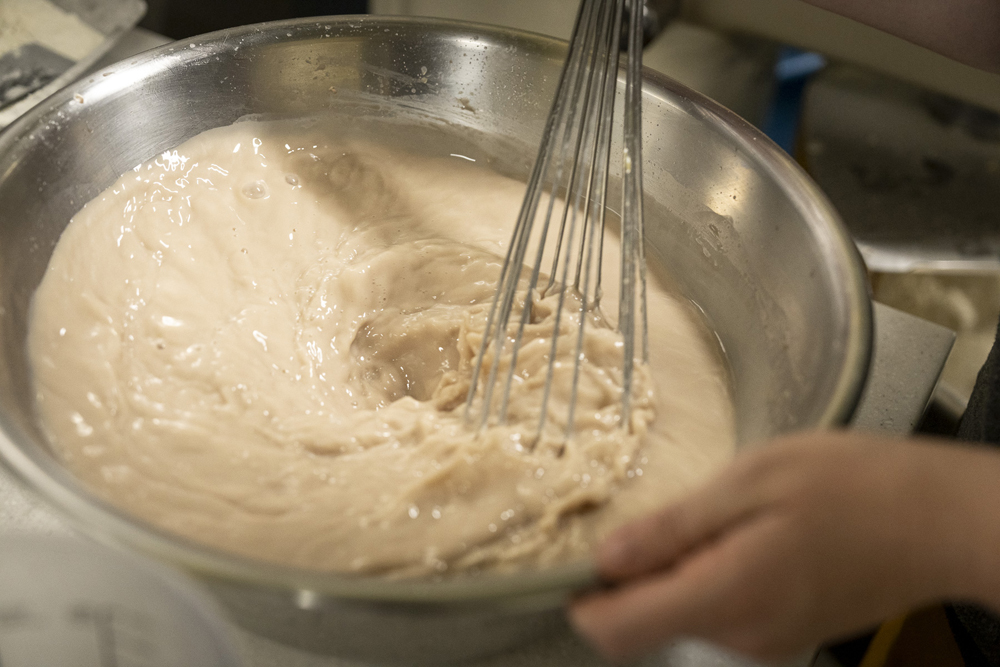 Many task are still done by hand. 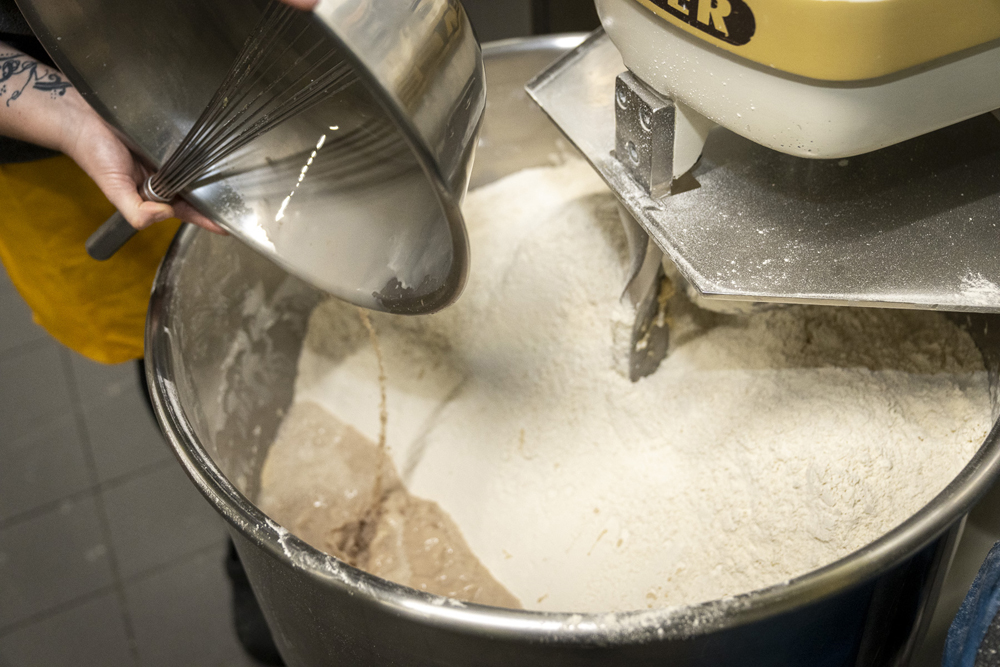 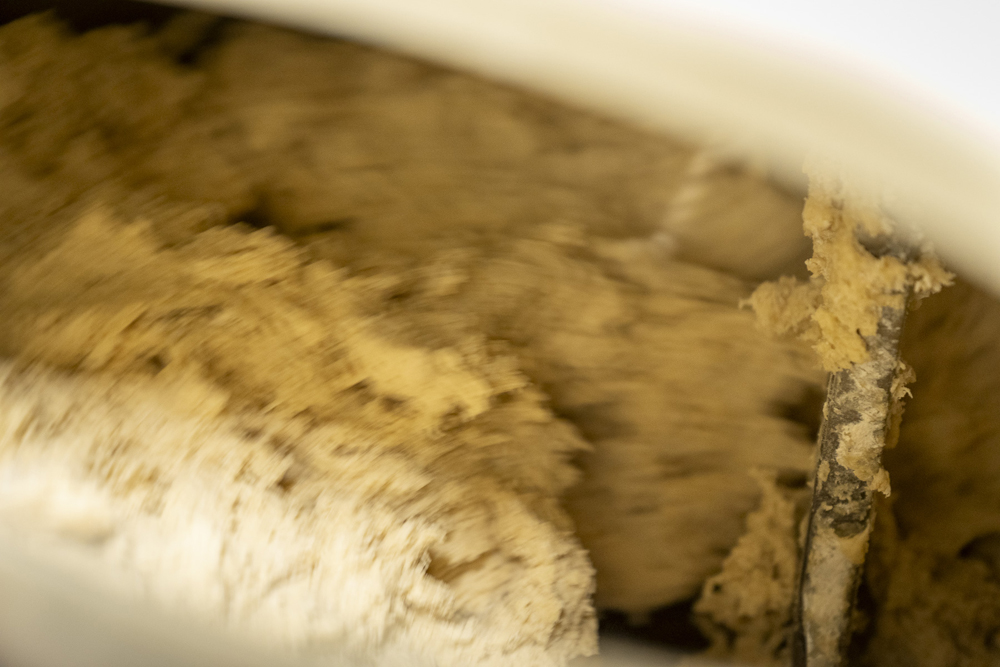 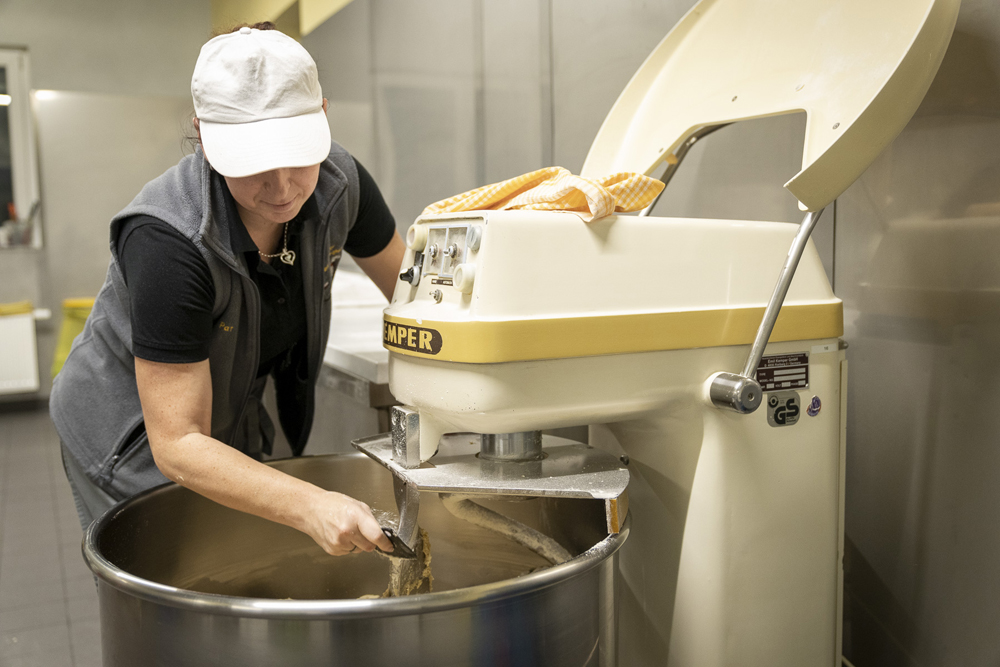 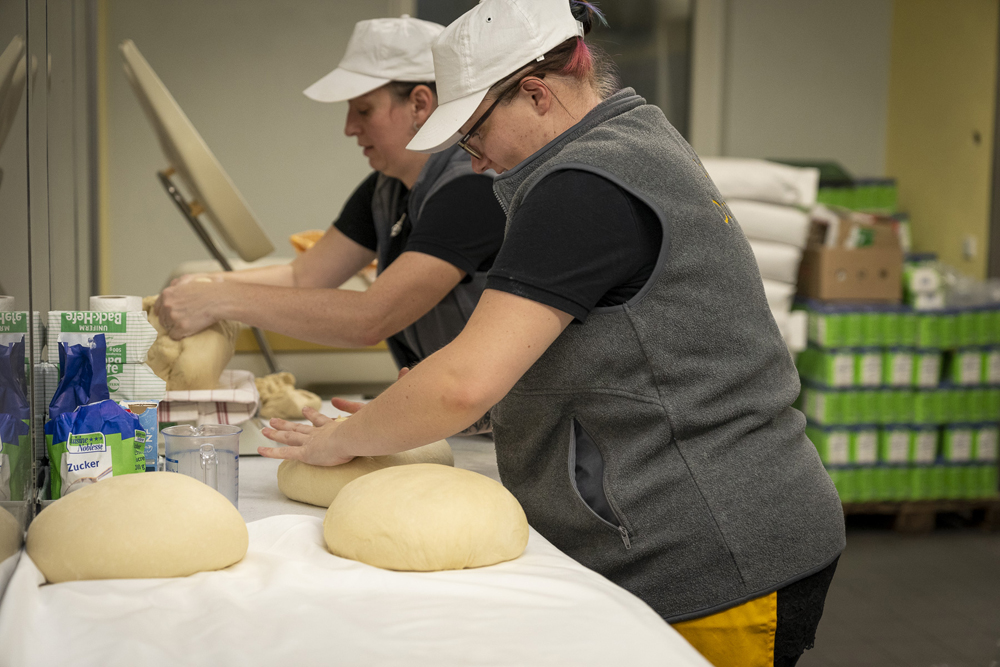 Jennifer Göppel (front) and Patricia Hoffelder (back) shape the dough into large balls,… 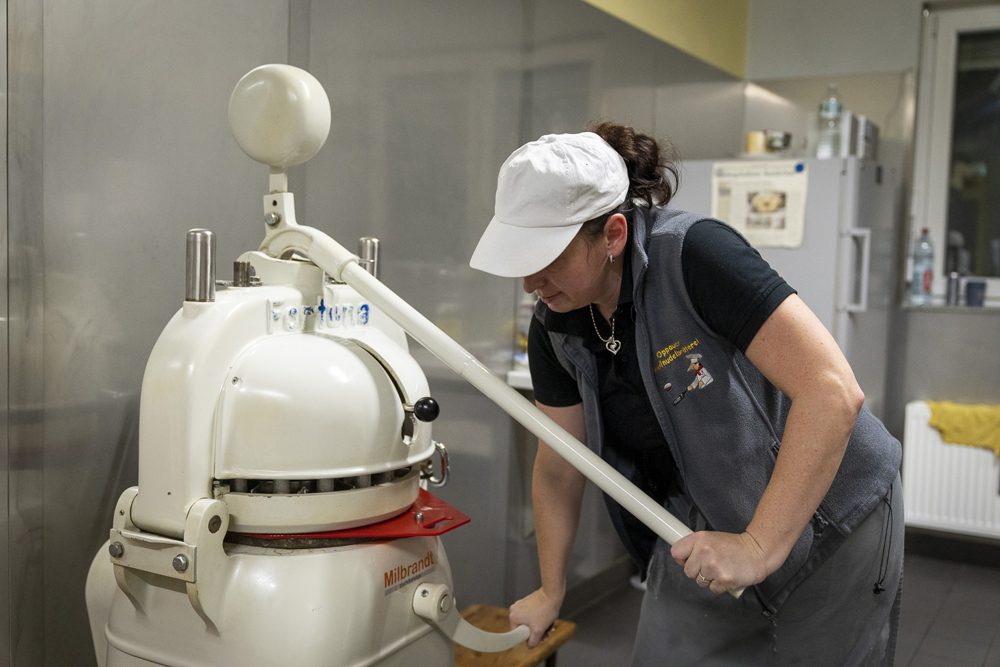 …which are then divided up into pieces by a bread roll machine. 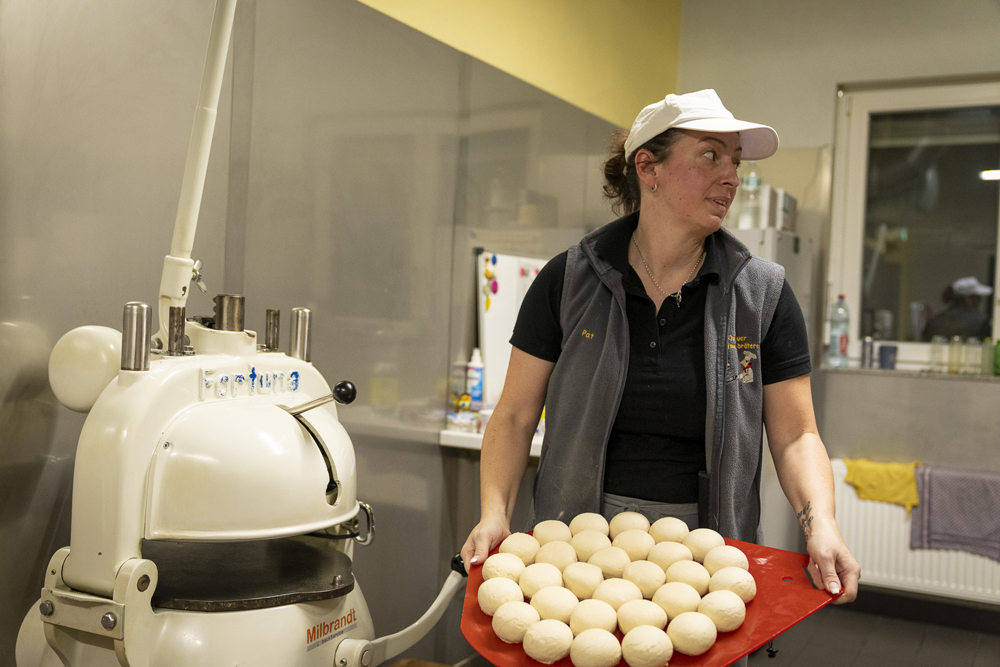 Ready for the pan! 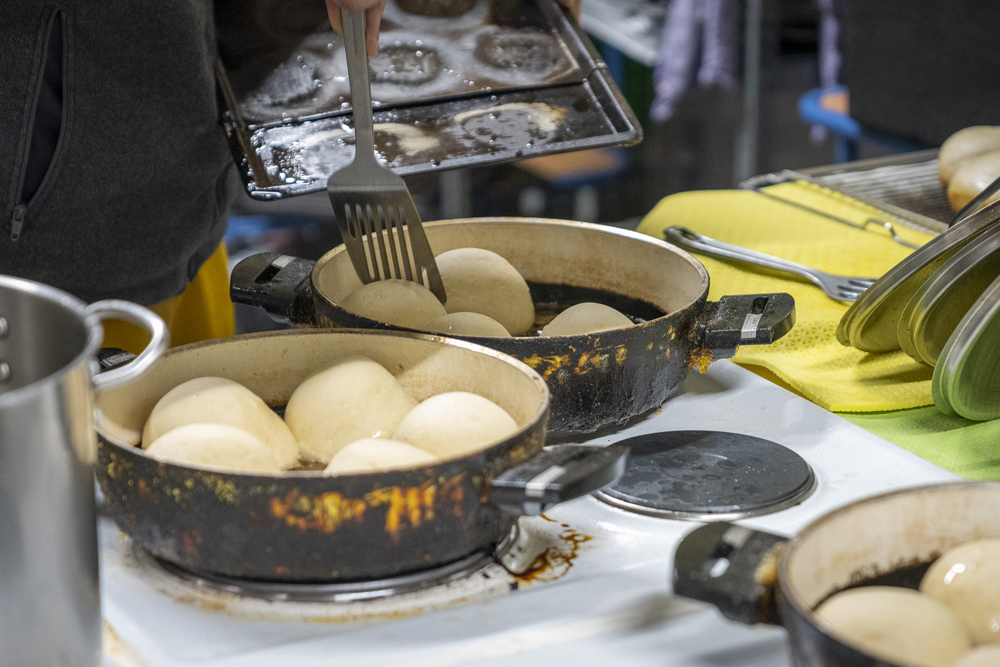 The locals of Oppau love ‘their’ Dampfnudel yeast dumpling. This relationship is actually legendary, because the delicacy is enriched with a local myth: Some generations ago, in the farmer’s village of Oppau located on the western bank of the Rhine, which was not incorporated into Ludwigshafen until 1938, the fire brigade had to answer a call to a house in the ‘Wälsche Eck’ because of massive smoke development. But before the ‘charge the hose line’ command could be given, two intrepid firefighters, Reuter Philb and Schmitte Schorsch, who boldly inspected the building, had fortunately found the woman of the house standing in front of a pan in the kitchen. Local writer Karl Räder contributed an article in 1906 for the newspaper of the BASF factory, in which he described vividly and in local dialect how “Hanjörg’s wife Bäwel” was hardly visible—cloaked in smoke emerging from the dumpling—that burnt in the pan to her loud grumbling. This heated story about Dampfnudeln has burnt itself into the collective memory of the people of Oppau. No wonder that the local carnival society founded in 1948 chose ‘Oberer Damnudle’ for its name.

Almost every day, the lukewarm dumplings in insulated boxes embark on their journey through the region—between Worms and Speyer on the western bank of the Rhine, and between Lampertheim and Schwetzingen on the eastern bank, including the cities of Ludwigshafen and Mannheim. Early departures at a time when many people were still asleep turned out to be a problem that set off a chain reaction: Some neighbours of the old production site in the centre of Oppau complained to the council about the noise and as a result the council noticed that the frying shop established there some 20 years ago had been registered as a two-person operation. So, the couple, both in their mid-50s, decided to set up a new production site in Ruchheim, some 15 kilometres away. Here on the industrial site, loading the vans early in the morning doesn’t disturb anybody. “And we wanted to safeguard the jobs of our 25 employees,” as the couple make a case for their business decision. “We are not old enough to retire and too young to quit our jobs,” Heike adds.

Even though everything is brand-new and less cramped here, nothing has changed in the way the ‘Yeast Dumplings from Oppau’ are made. The family recipe still stipulates flour, salt, sugar, yeast, eggs, margarine and water as ingredients for the dough. The exact ratio will not be divulged, of course. Heike does reveal though that she tried her hand at a yeast dumpling for the first time in the bakery of her ex-husband in Frankenthal exactly 30 years ago and that she had difficulty handling the dough in and out of the pan. Originally, she trained as an inclusion assistant but has come under the spell of yeast balls. And so has her husband Steffen, who trained as a toolmaker. His profession has even turned out to be a stroke of luck for his new vocation. After all, the vagaries of machinery in the frying shop require his hand. “My husband is an all-rounder,” she comments.

Patricia, who has been a member of the production team for a number of years, doesn’t have to think about how much of what to put in the mixing machine to create dough for 30 dumplings. Heike explains why they only use eggs from the Bioland brand: “We do this for the chicks and not because of the taste,” because “chickens that lay eggs for us” must live under good conditions.

It is not only the people of Oppau who love ‘their’ Dampfnudel enriched with local legend. The special yeast dumpling with an elastic inner texture and a salty and crusty bottom is a traditional culinary delight throughout the Electoral Palatinate region—eaten with either custard sauce or wine cream, or even with potato soup. This is why people in the Palatinate got roiled when the Bavarian minister of agriculture listed the famous dish in an online database for specialties from the Free State of Bavaria some years ago. The colleague from the Rhineland-Palatinate sent a letter of complaint to the ministry in Munich, which clarified the matter: No, Bavaria does not intend to claim the delicacy that is also popular in the Palatinate for itself. The only thing then left to clarify is why the Dampfnudel (literally: steam noodle) is called the way it is, even though it doesn’t look like pasta. The answer to the riddle is: The word derives from the old form ‘Knudel’ that is close to Knödel—which again is a close relative of the Dampfnudel with the same shape. 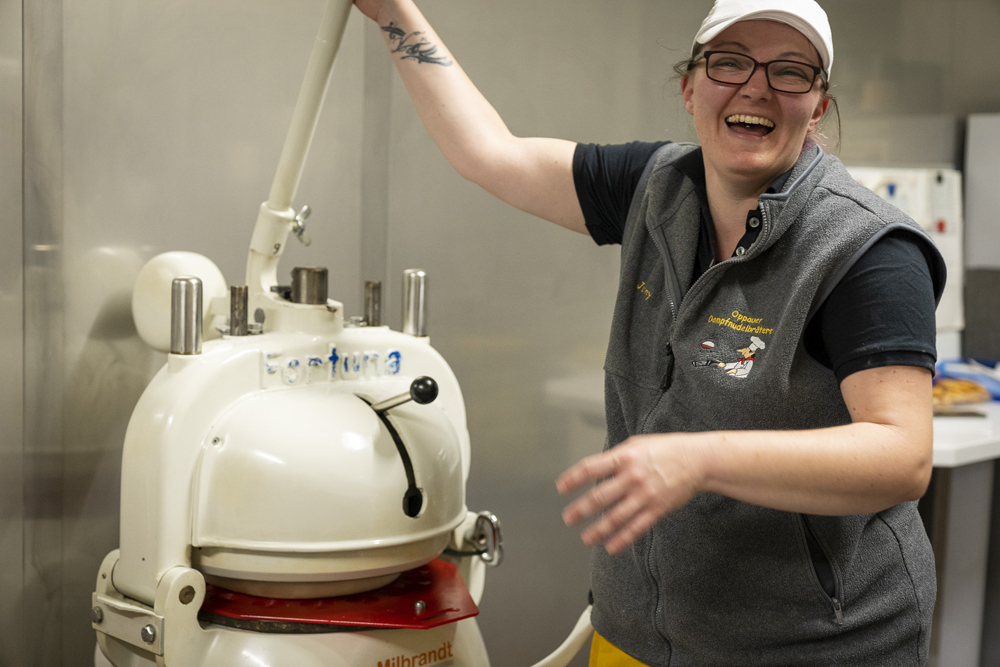 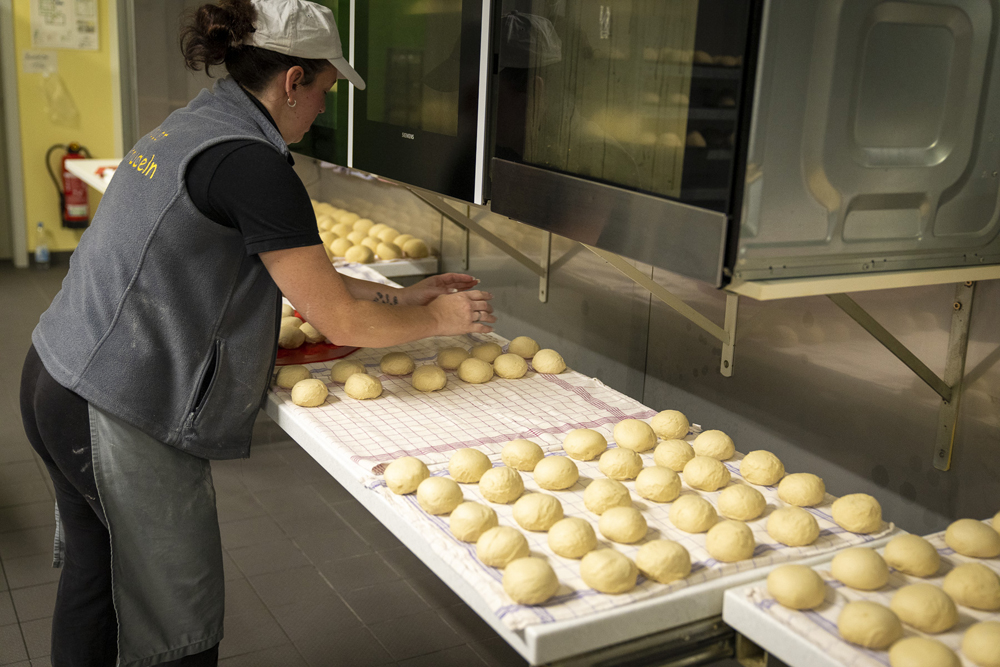 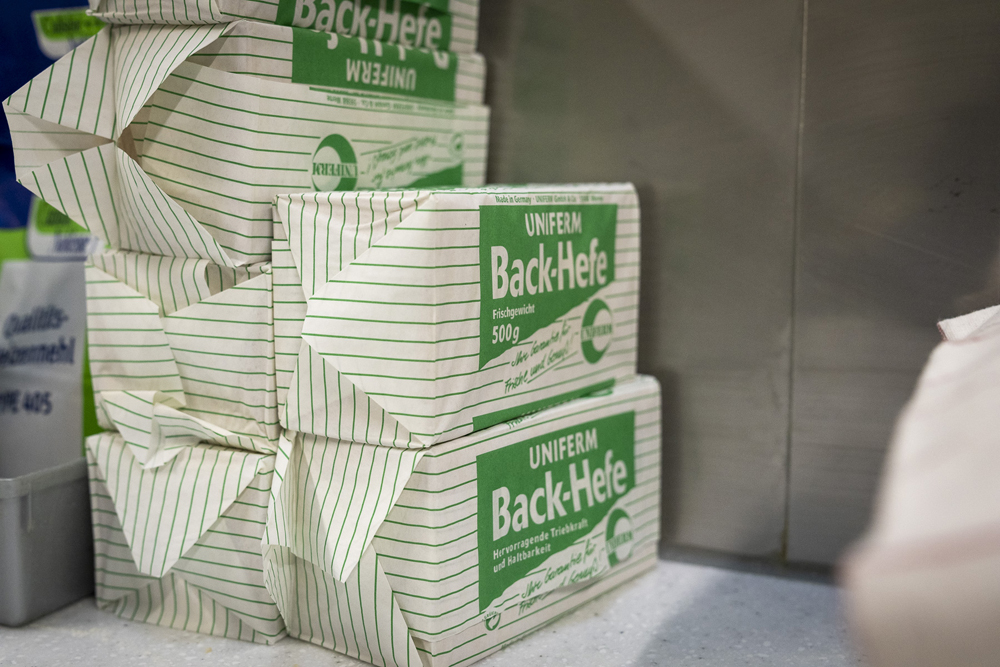 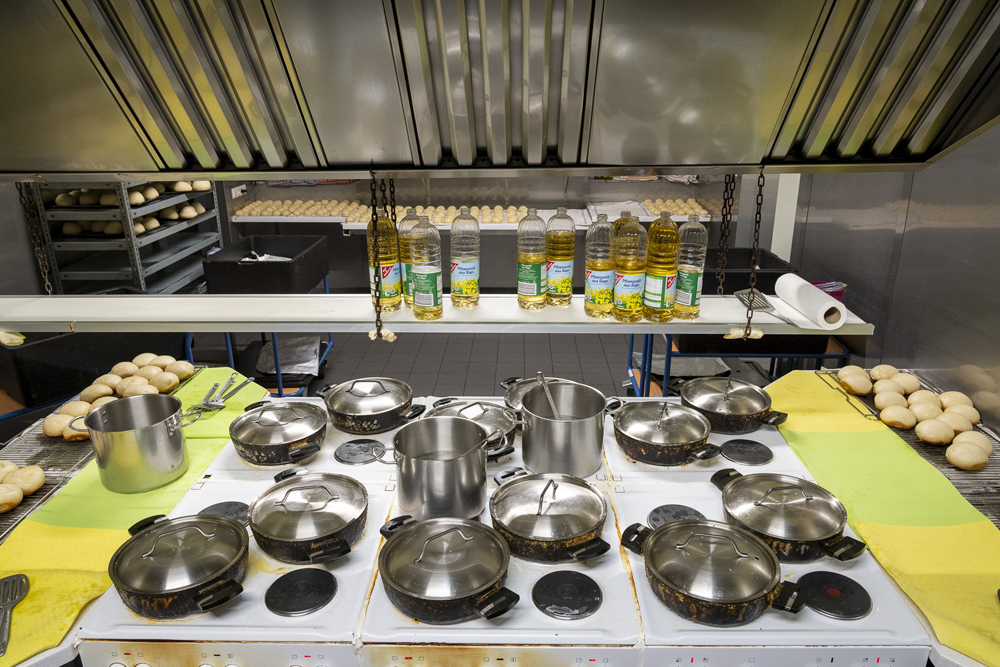 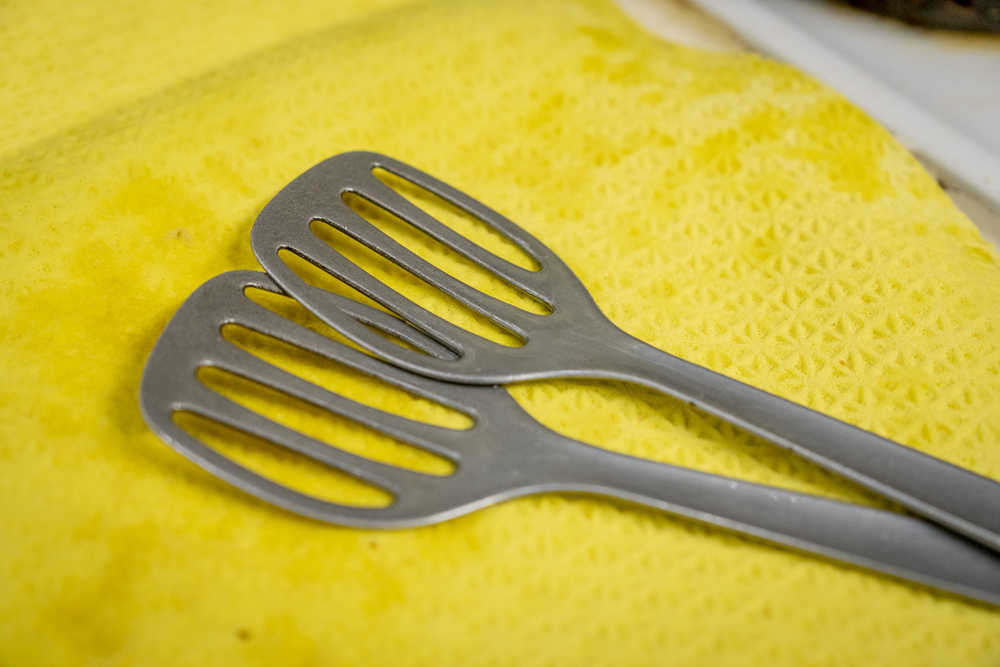 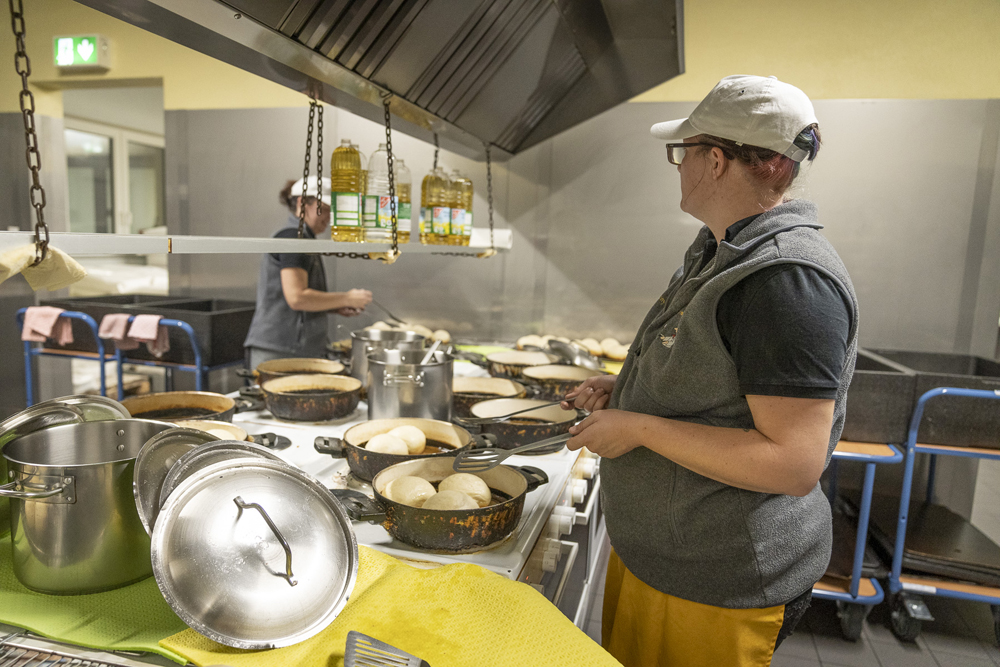 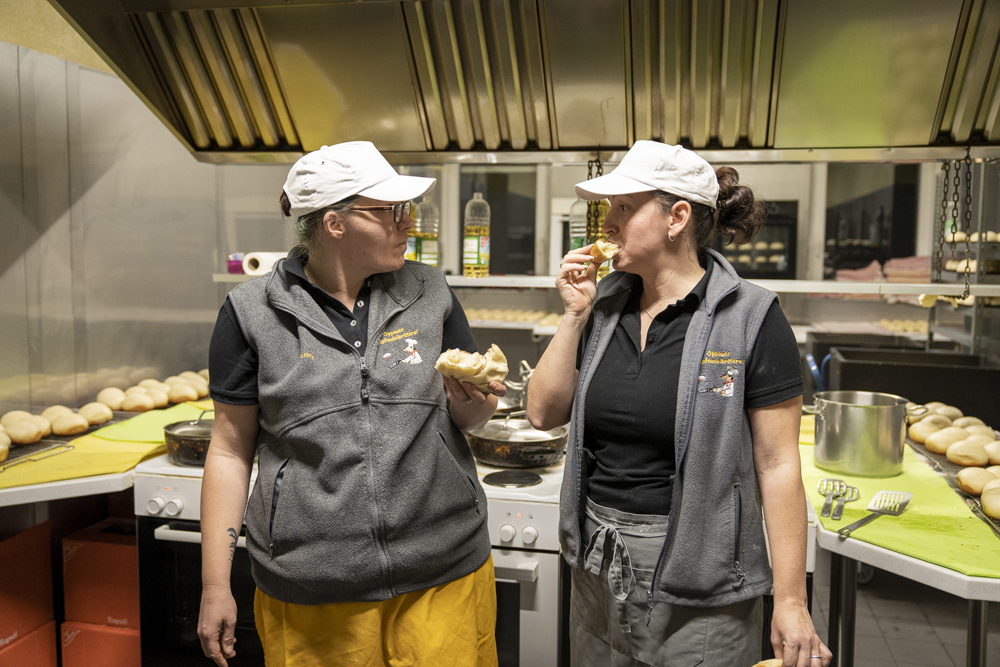 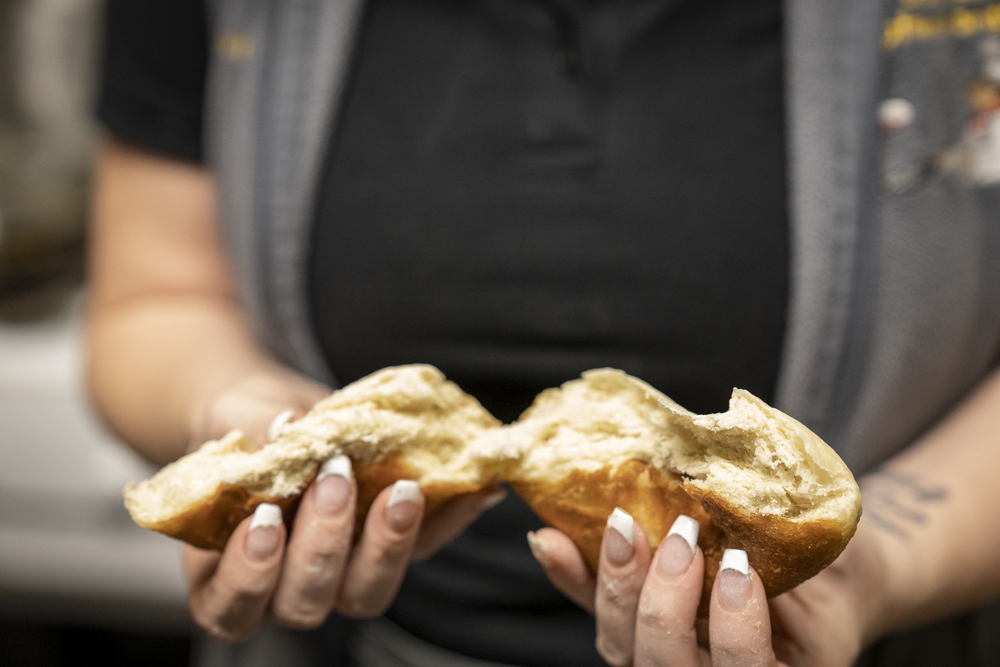