Frank Mayer is the fifth generation to run the Mayer private brewery in Oggersheim, a district of Ludwigshafen. There, you can experience what is no longer a matter of course in the industry. You can watch the beer fermenting and even smell and taste it. A visit to the oldest brewery in the Palatinate.

The first thing you hear is rhythmic rattling. This is how the brown bottles start their journey through the factory hall of the Mayer brewery in the middle of Oggersheim, a district of Ludwigshafen, this morning. The recurring sound of them rattling against each other reverberates far across the courtyard. Milky panes cast a diffuse light inside. Steam rises, as water drips onto the tiled floor. It’s clanking, hissing and clattering so noisily that Frank Mayer has to shout to explain what is happening here: At the far end of the hall, the returned bottles come in, then find their way over large rollers to the sink and come out again in a scramble. Laid bare, wet and clean, they then line up one after the other until they are pushed one by one to the bottling station. Those with a blemish are sorted out. The others are filled with the amber fluid straight away—export beer in this case. Mayer grabs one of the bottles only just before it would get sealed with a crown cap.

“It’s very drinkable,” says the head of the brewery raising the bottle. Wearing a moss-green jumper, a matching waistcoat and a spotless white shirt beneath and sporting a tanned complexion and short grey hair, he leans against a tower of dark blue beer crates stacked in the brewery’s courtyard. His family has been brewing beer in the heart of Oggersheim since 1846. The typical brick malting tower and the brick brewhouse with its two chimneys were built a few years later. With its hipped roof and blue shutters you would expect to find the front building of the brewery in Munich rather than in Ludwigshafen. It shields the factory premises from Schillerstraße road and was already there when the brewery was founded. Just like in the past, the beer tapped inside this front building comes directly from the manufactory behind it—the oldest brewery in the Palatinate and the oldest company in Ludwigshafen, as the owners say. Frank is the fifth generation to run it. And he is convinced that “brewing beer is an artistic craft to pursue.”

This is most evident in the heart of the brewery: the brewhouse. It is still in operation unlike the malting tower, which is empty. Even from the outside, the huge, bulbous copper vessels shimmer through the large lattice windows. Inside the vessels water, malt and hops are transformed into beer. Actually just in a preliminary stage, because after repeated heating and filtering, the golden-brown liquid lacks one important thing: alcohol. This only develops over time in the fermentation cellar on the other side of the courtyard. Large, dark basins stand out against the light-coloured wall tiles in this cellar. In one of the smaller basins, some 15,000 litres of Pils are undergoing the fermenting process. Fine frothy foam covers the surface. Small bubbles of air are constantly flowing upwards from beneath. A thermometer at the edge of the basin shows twelve degrees. When it reaches six to seven degrees, the beer will be transferred to the floor beneath to mature for almost eight weeks. 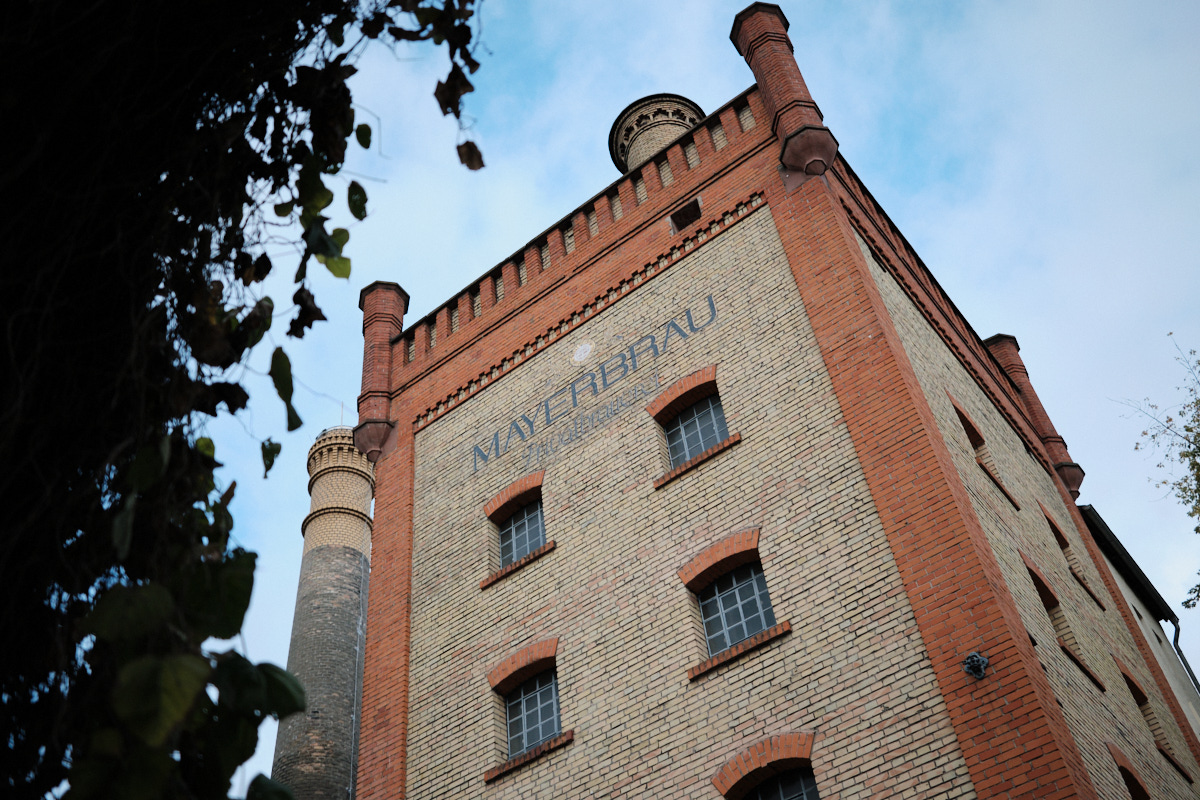 The Mayer family has been brewing beer in the heart of Oggersheim since 1846. 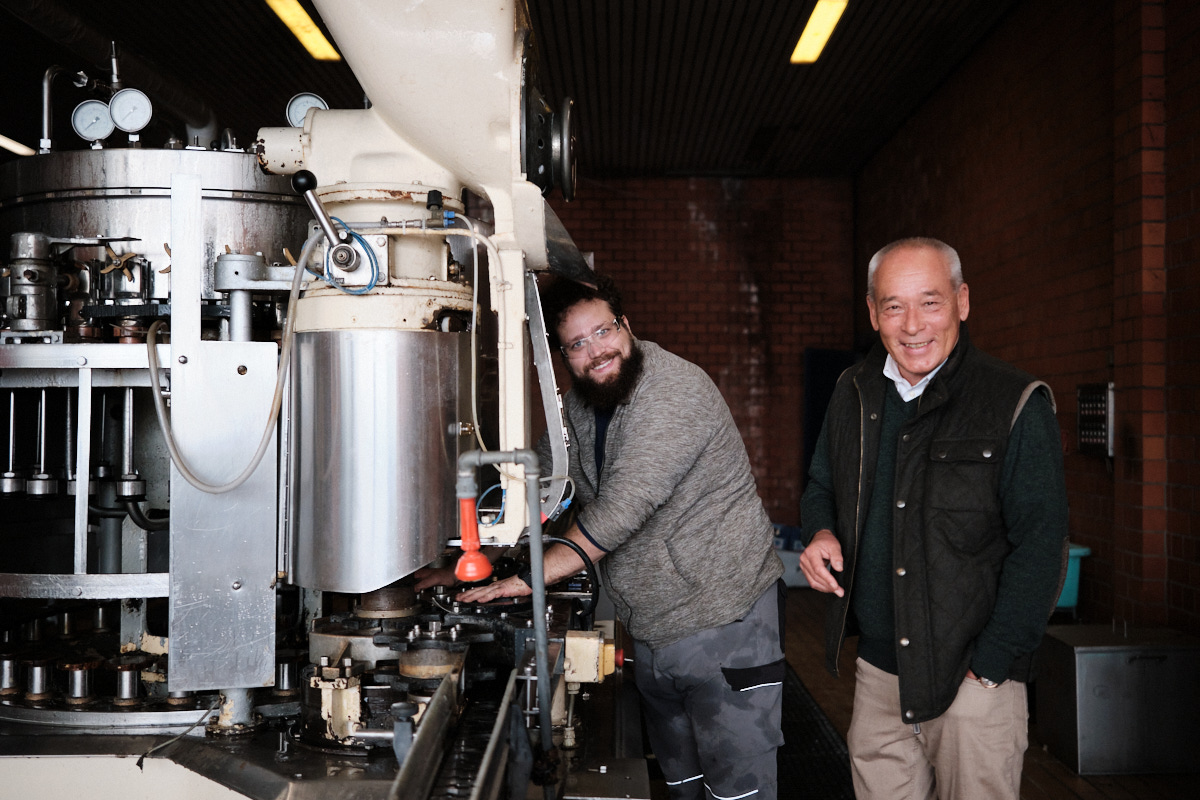 Frank Mayer is the fifth generation to run it. 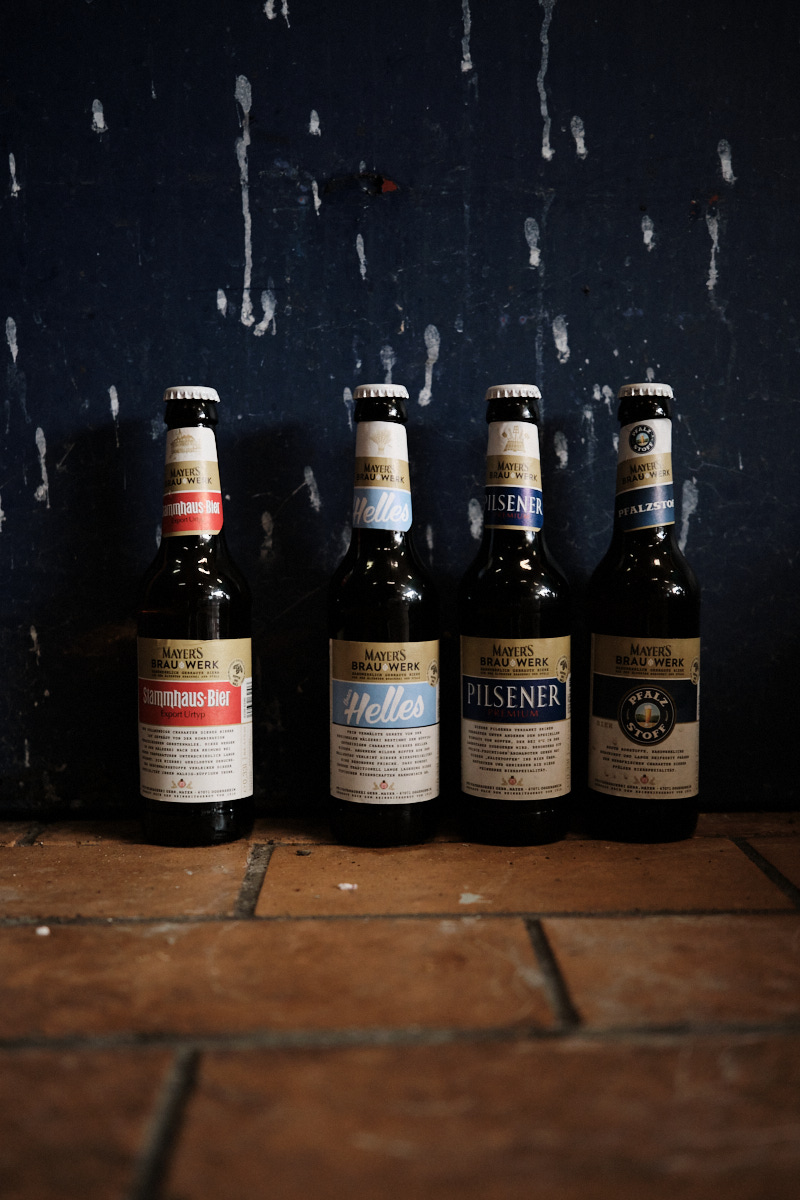 The Mayer private brewery is the oldest in the Palatinate. 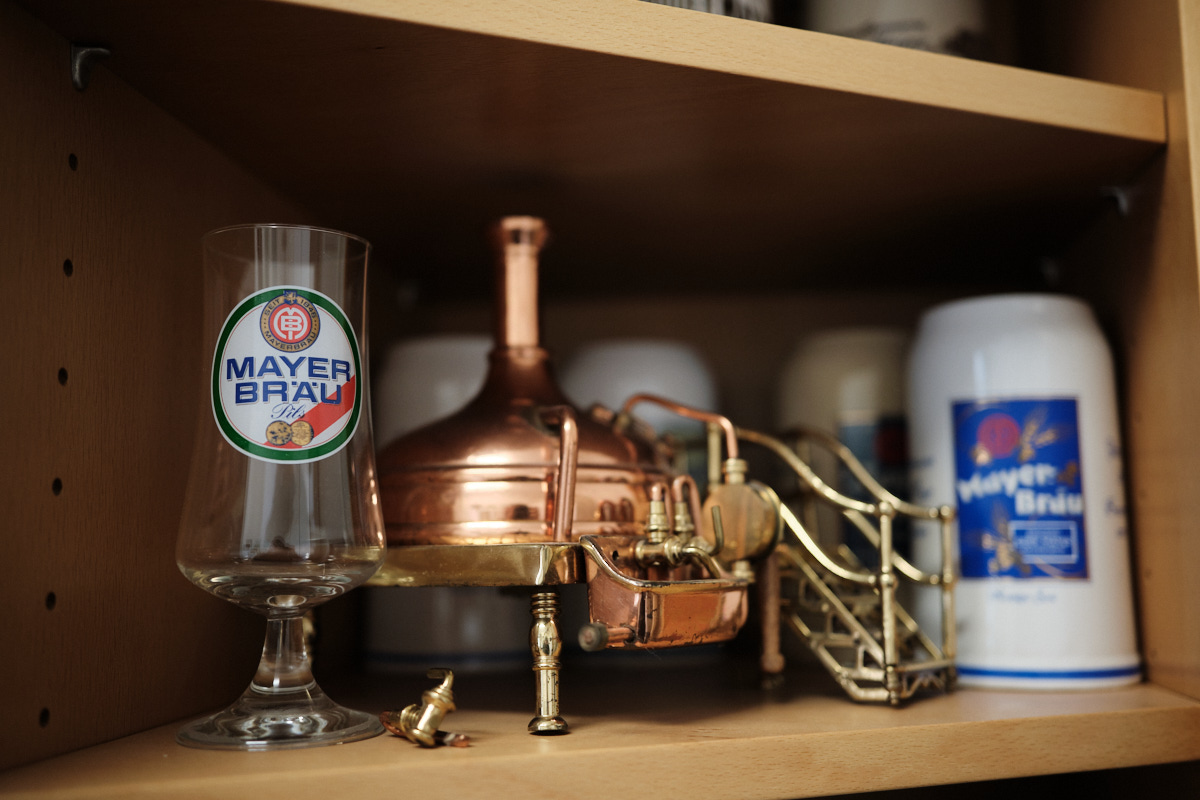 And the oldest company in Ludwigshafen. 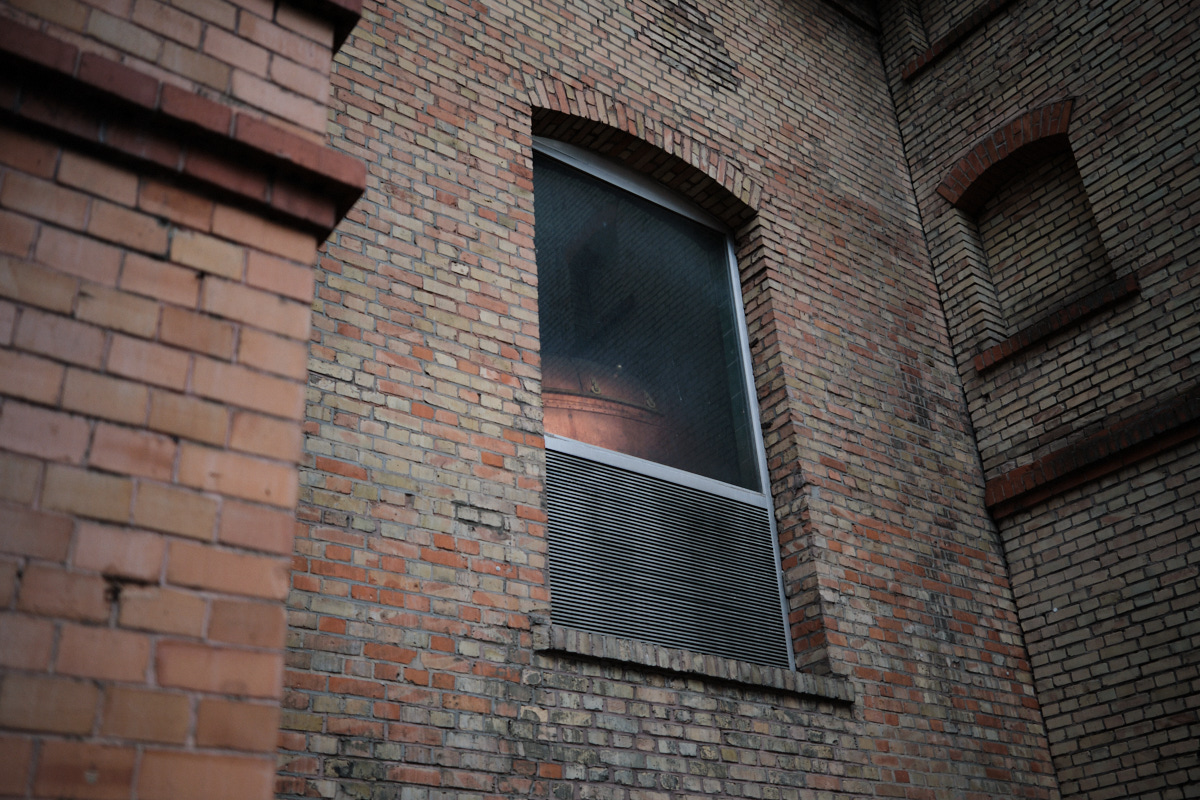 Looking into the heart of the brewery: the brewhouse. 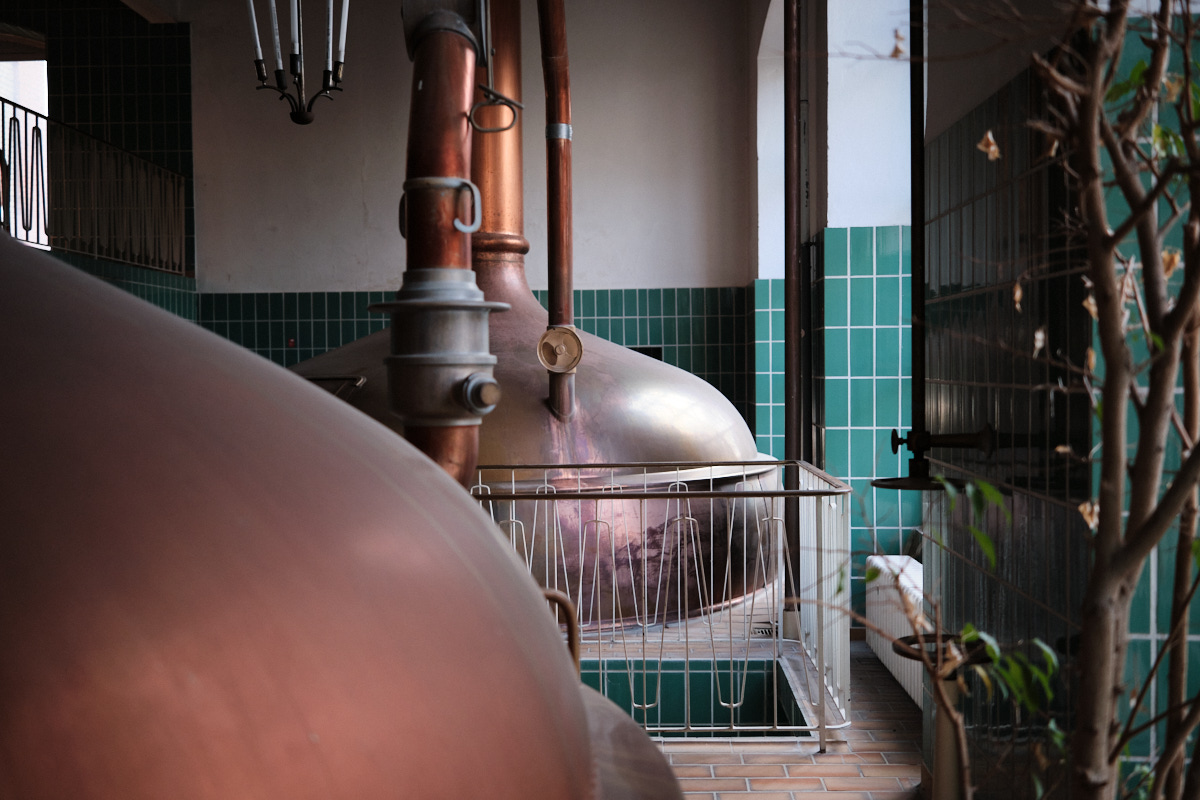 This is where water, malt and hops are mixed. 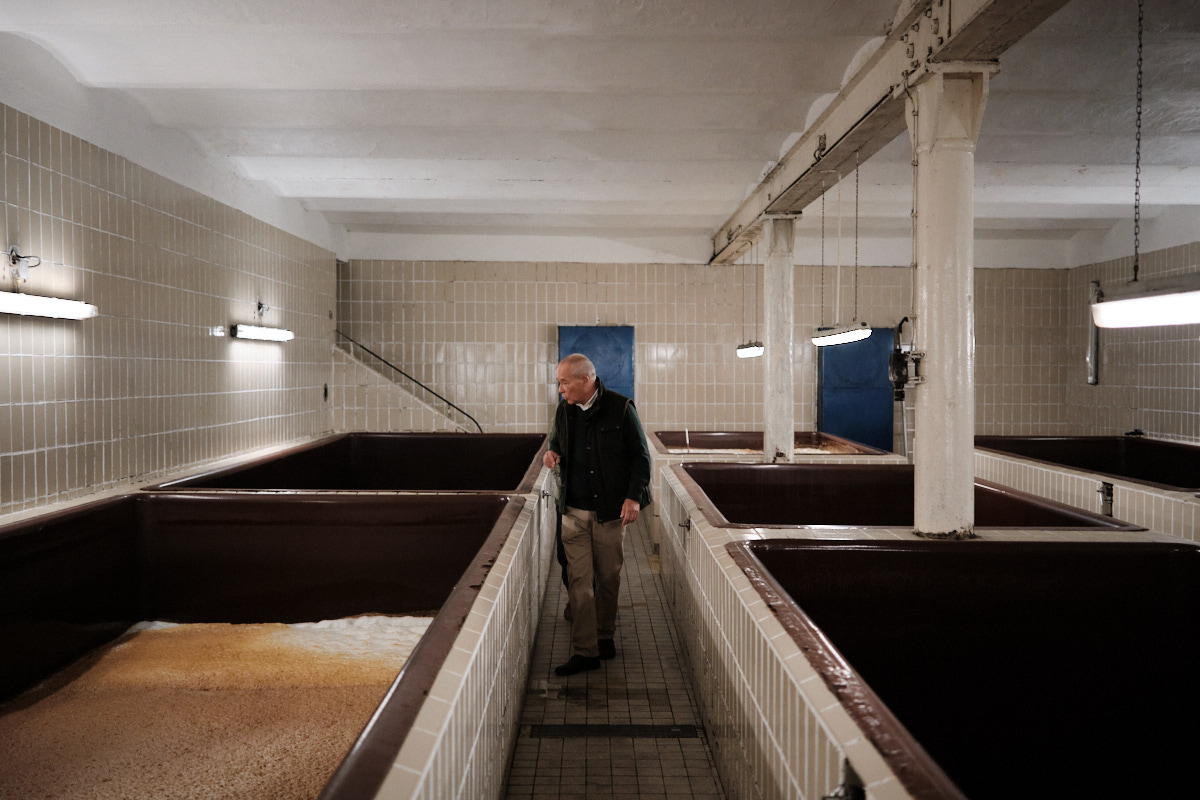 The beer matures in the fermentation cellar… 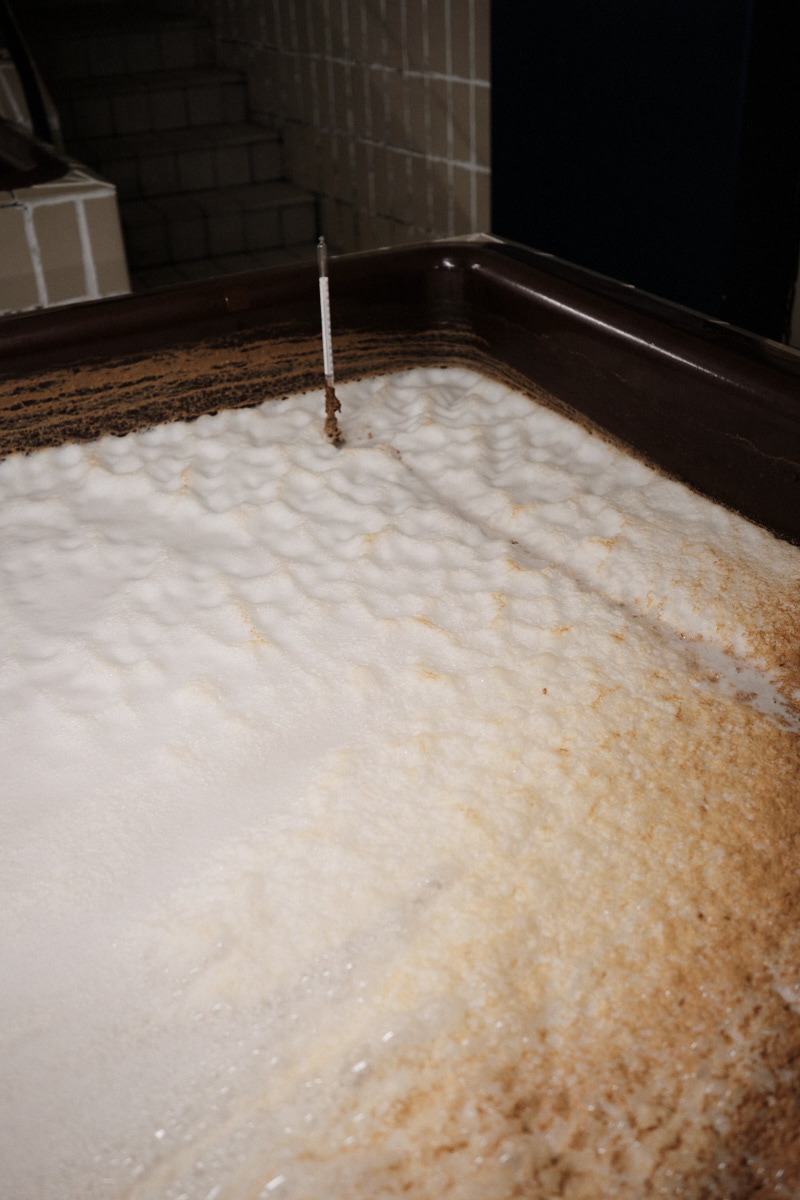 … for a total of eight weeks. Only few beers are given that much time.

Most beers bottled in Germany aren’t given that much time, because most breweries, especially the big ones, have switched to the warm, closed fermentation method, as Frank explains. This process is easier to automate and faster than the open, cold fermentation method, which is the traditional way and still the standard in his brewery. The head of the company is convinced that it produces the better beer. With rough edges and slight deviations, to be sure—but with actual character.

Brewing beer is an artistic craft to pursue

To produce this character, the employees need to have a sure instinct—at least in this artisanal business here in Oggersheim. “Someone has to be personally present and intervene in every production step taking place in our brewery,” Frank emphasises. The brewer has to keep a close eye on the brew and know the 60-year-old equipment well to ensure that the copper vessel reaches the right temperature at the right time, for instance. You won’t find a computer in the production process here.

The art of brewing beer requires creativity just as any type of art does. And this is evident in the brewhouse. A handful of glasses and beakers stand on a ledge, containing various roasted-aromas malts. Some taste of peat and smoke, yet another very dark one tastes of coffee. Artisanal brewing requires imagination and the ability to play with the ingredients skilfully and combine them in new ways over and over again. The same applies to the various hop varieties and brewing methods. And it requires special raw materials, as you can experience with the Wunderbier variety, Frank’s first craft beer. “Certainly, each of our beers is a craft beer in the true sense of the word, that is, an artisanal brewing product,” he clarifies. “However, the Wunderbier variety is particularly precious, because we use very special malt and hop varieties for it.” Mandarina Bavaria is the name of the hop that gives the beer its fruity taste. And all this without any additives. The Mayer private brewery brews according to the German beer purity law. The product range has grown to 17 varieties, including traditional ones such as Weissbier, Pils and export beer, but also specialities such as Fastnachtsbier, Schillerbier and Pfalzstoff.

“We focus on speciality beers in good time,” Frank is convinced. “That’s how we intended to set ourselves apart from the big breweries.” Frank himself prefers to drink mild, spicy beers. Kellerbier varieties, for example, are always good, he thinks. In autumn, however, he enjoys drinking a Festbier once in a while. Around 20 people work in Frank’s brewery, including two brewers and a master brewer. Frank himself holds a degree in business administration and is responsible for the numbers, marketing and sales. His brewery supplies restaurant owners, the specialist beverage trade and corporate customers within a radius of about 50 kilometres. You can also buy the beer directly at the factory or taste it as an accompaniment to a hearty meal in the adjacent brewhouse.

A few hours later, it has become quiet at the bottling unit. The team can produce up to 12,000 bottles in one hour. Frank does not want to reveal how many litres of beer are bottled and put into the crates every year. “The quantity doesn’t matter,” he thinks. Quality is what matters most when it comes to the arts. 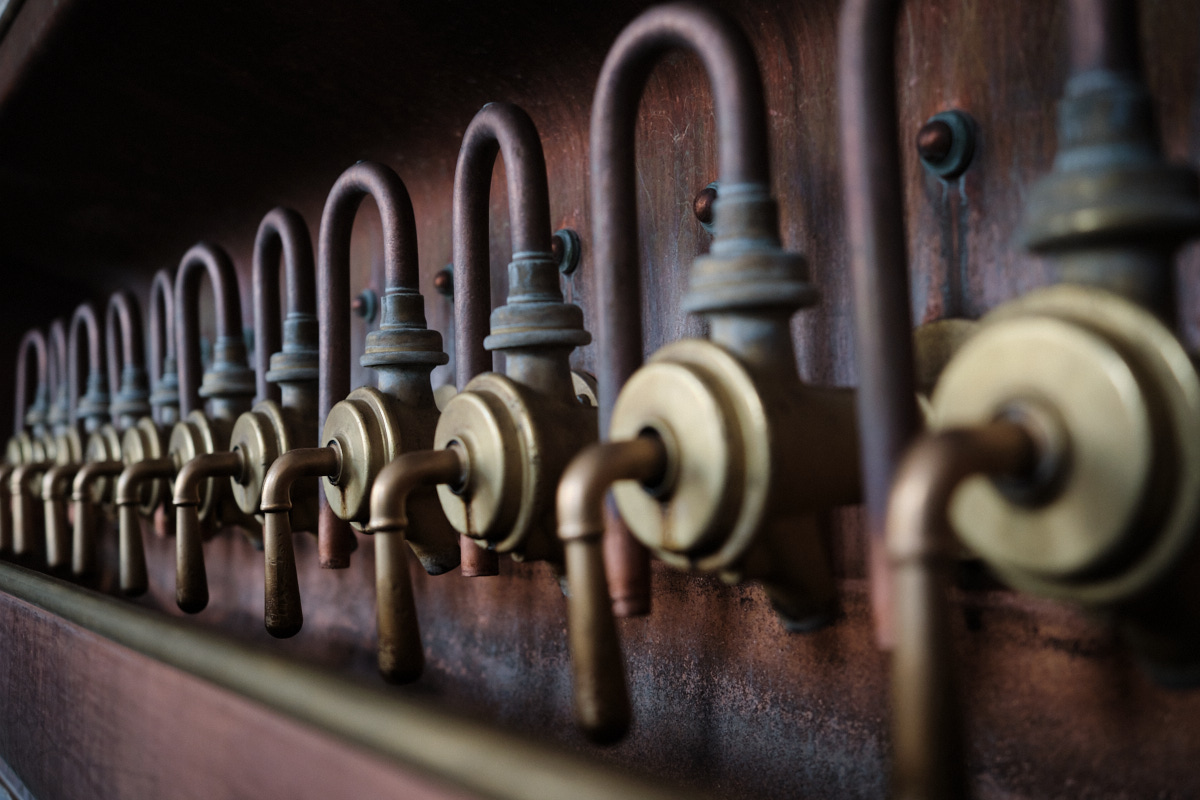 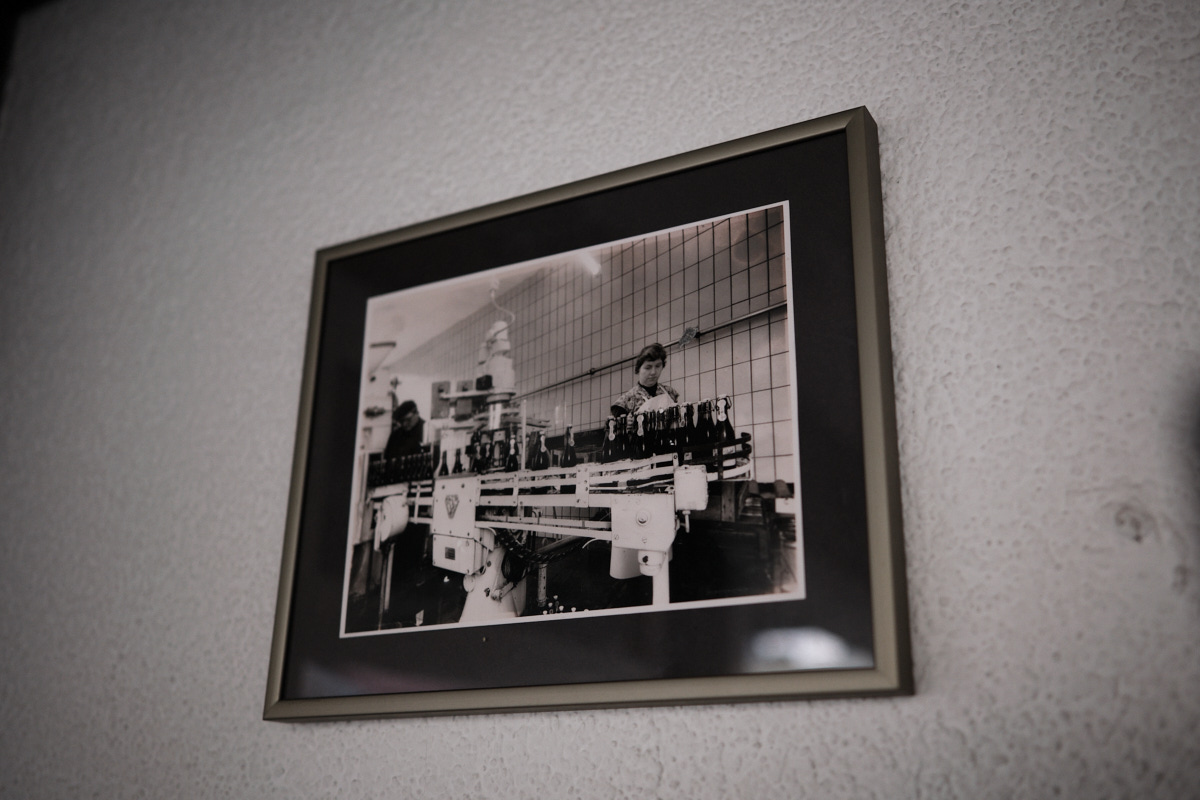 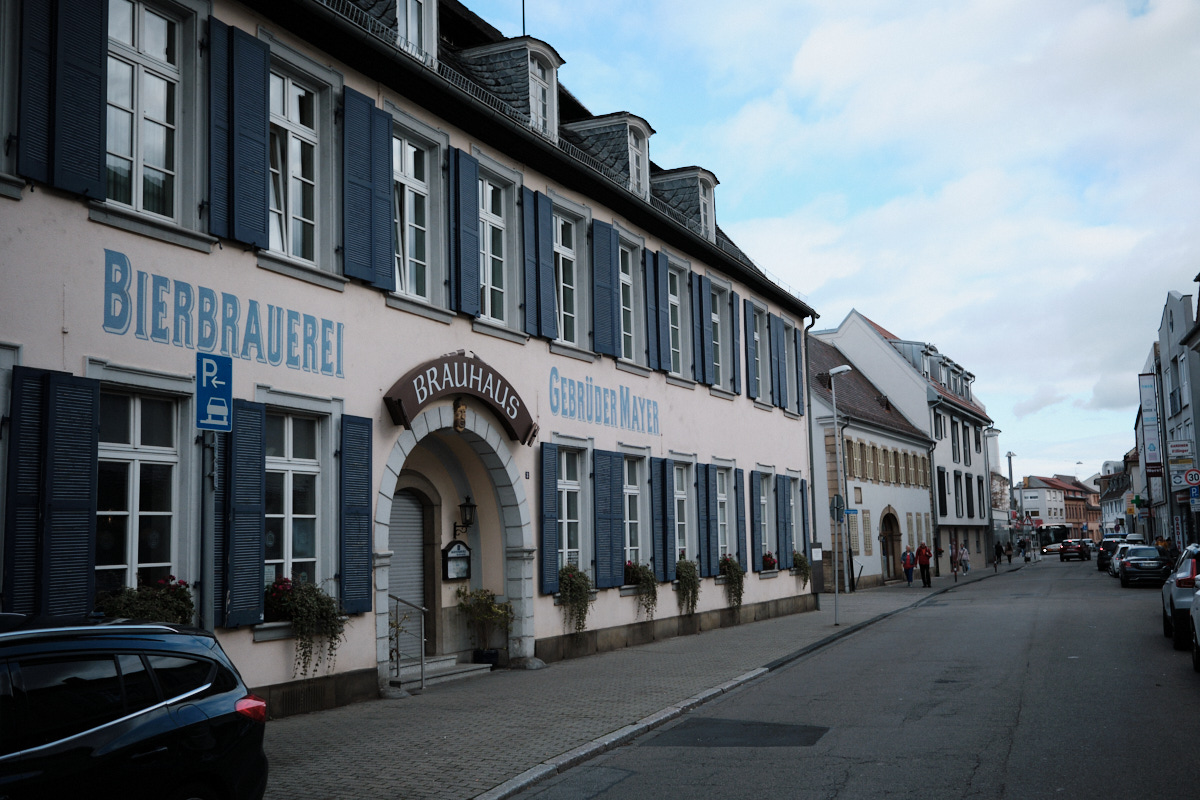 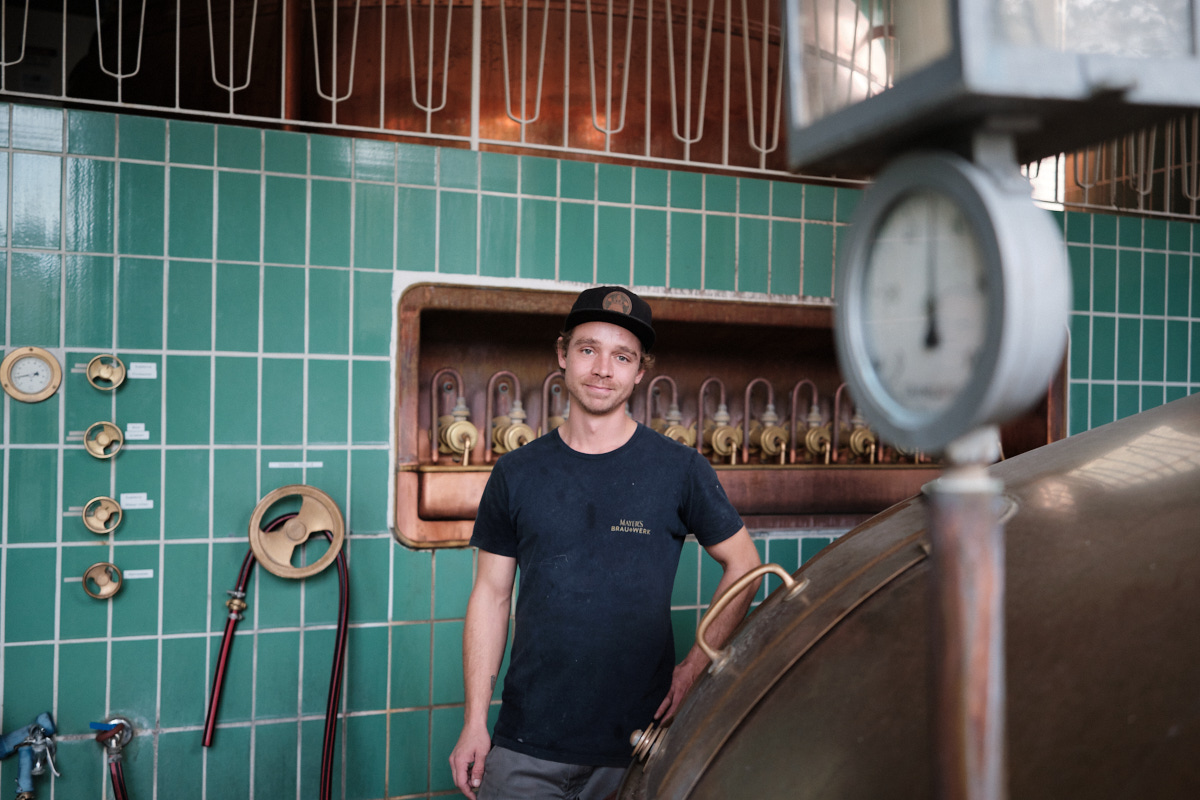 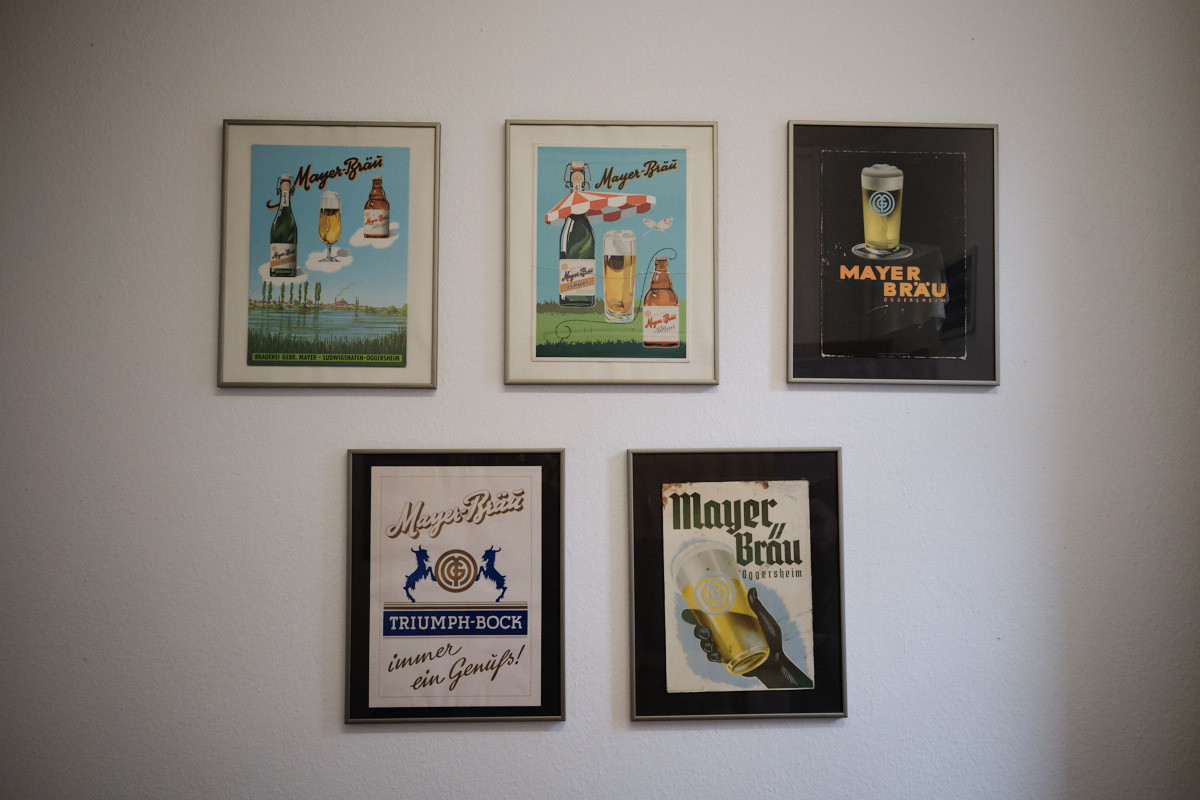 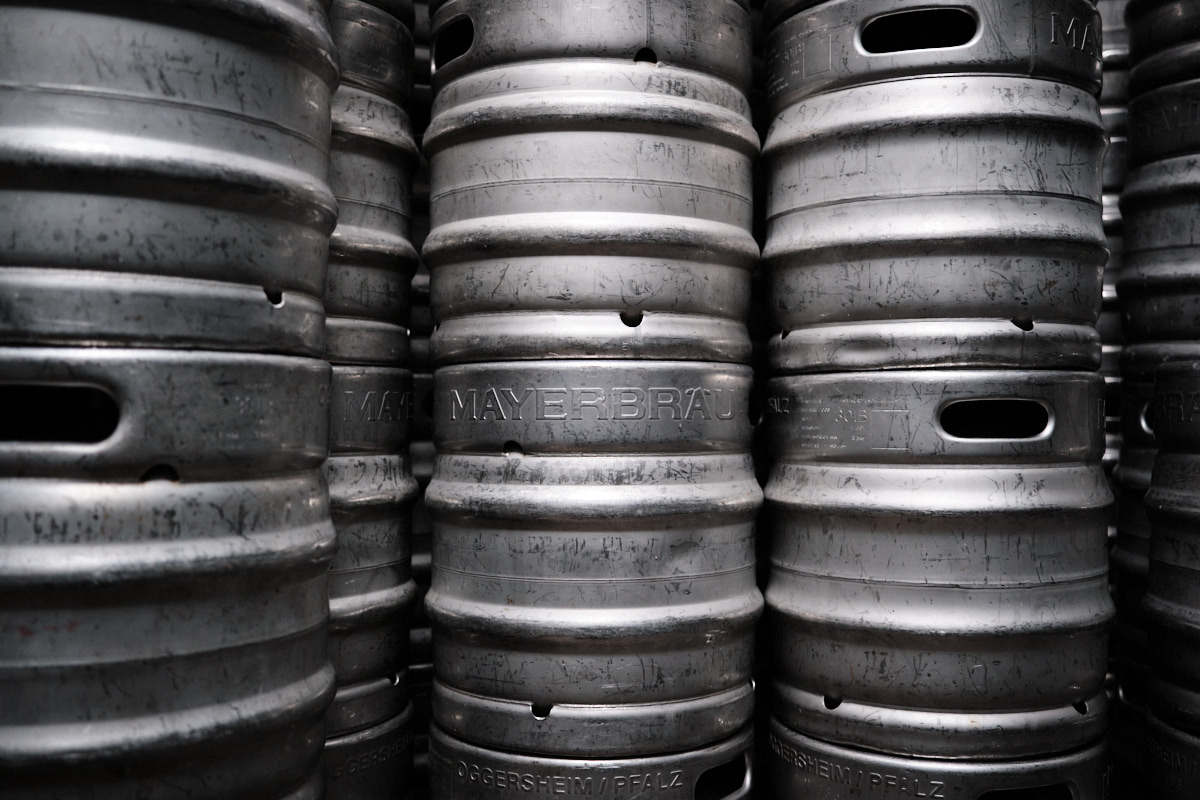 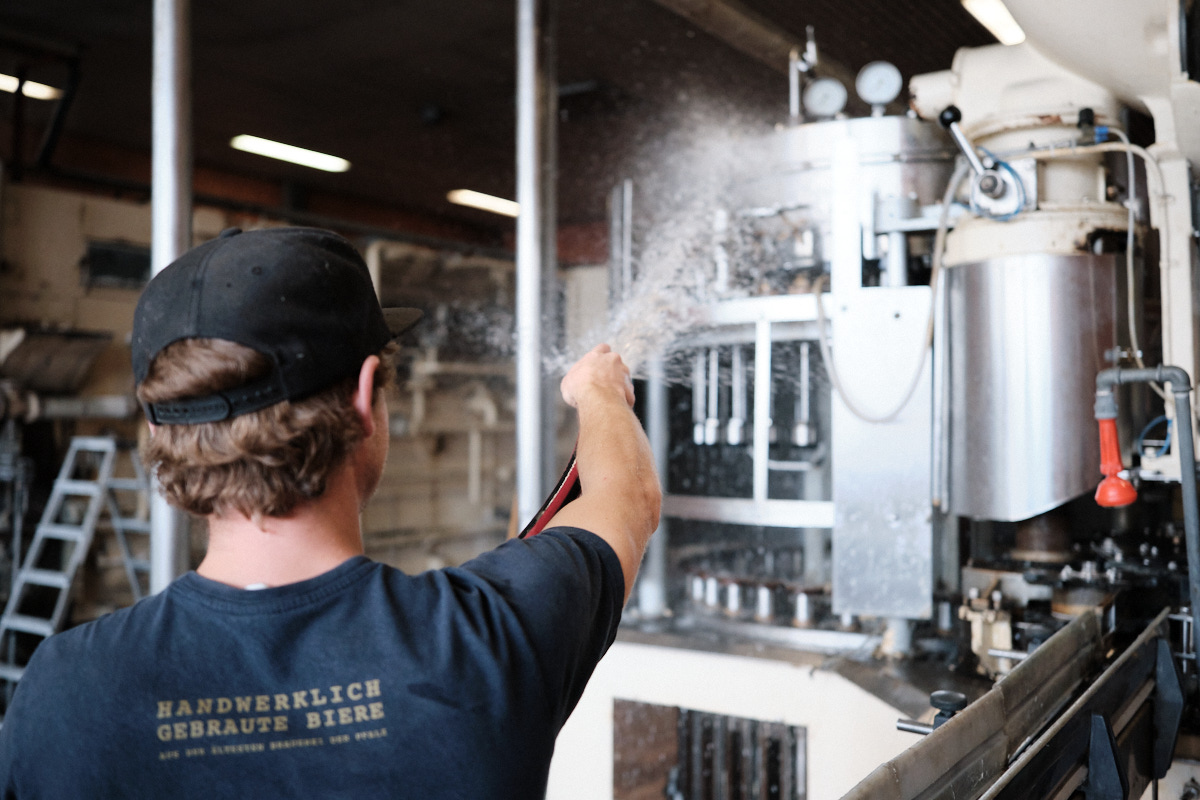 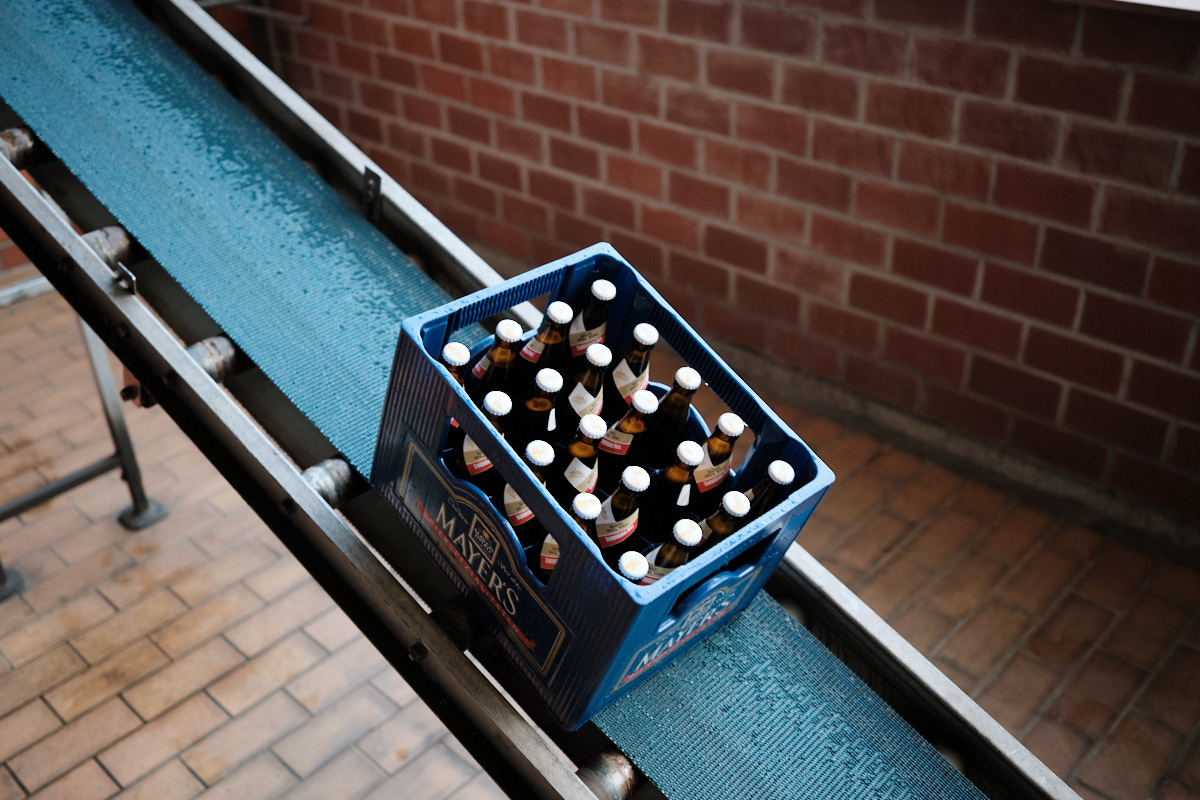 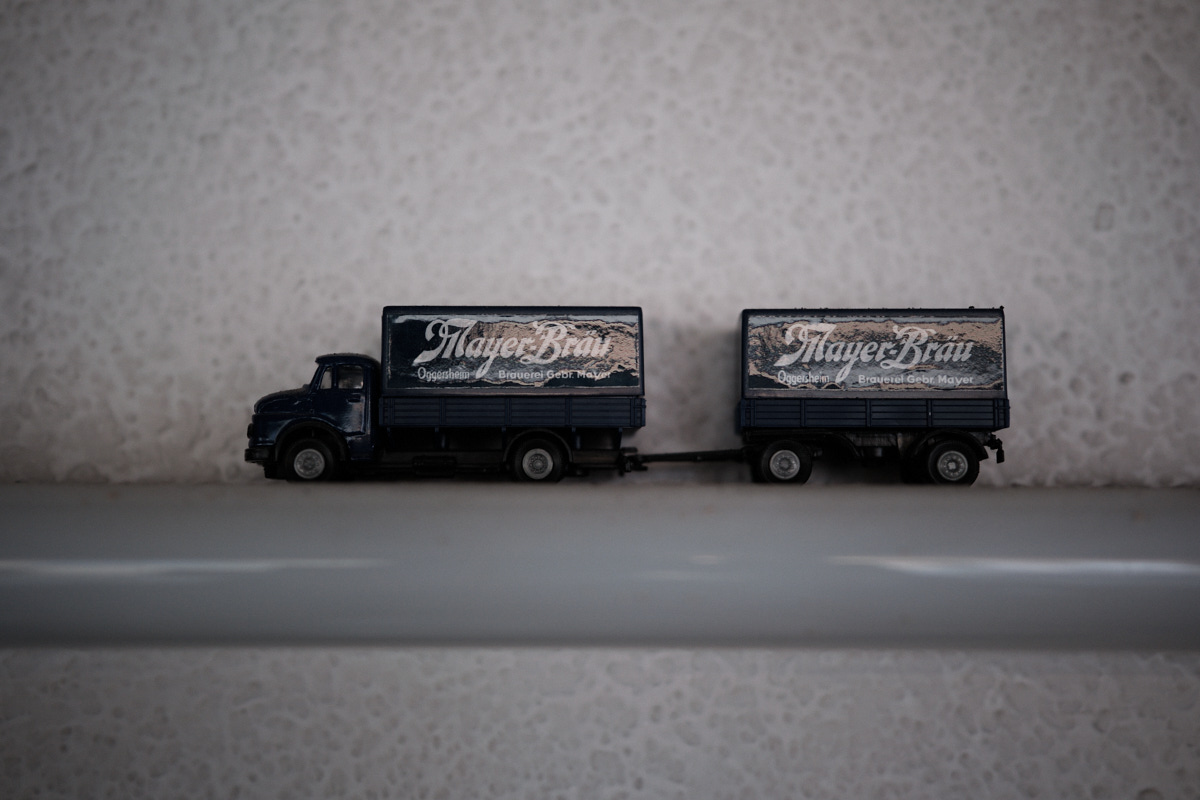