October is quince season! However, very few people know what to do with this versatile type of fruit that originates from Iran and the Caucasus. The rock-hard fruit tastes bitter in a raw state, only ever releasing its delectable flavour when preserved, stewed, baked, or when its juice is extracted or processed to make alcoholic beverages. For exactly this reason, Ellen Müller and Rainer Stadler founded their ‘Quittenprojekt’ at Bergstraße road. Their motivation: A greater variety in quince types. And: A huge variety in culinary delight.

On this late summer day, the sun shines as if it was its last chance to perform before the wafts of mist appear. Competing with the sun are these golden-yellow pear-shaped bulbs glittering in the greenery of the treetops: quince. These fruits ripen lushly at a time where the harvest for other fruits has long since passed—it is not for nothing that they are called ‘autumn fruit’ in Germany. Ellen Müller picks a fine specimen from one of the trees on one of Weinheim’s ‘Ökokontoflächen’ (ecological account spaces), of which she and Rainer Stadler assumed ownership in 2011. She rubs the fruit between her hands. It almost looks like she wants to polish the fruit variety that is assigned to Aphrodite, the Greek goddess of love. Using a massage glove, Ellen removes the bitter woolly down, which has served the fruit as a protection against predators and sunburn. “Every single quince passes through my hands,” she says, before the rock-hard raw specimen with a furry coat can bewitch the senses of gourmets. Scrutinizing the golden-yellow ball by rotating it in all directions, Ellen explains how she sometimes harvests extra large specimens, exceeding 1,000 grams: “My record so far: 1.3 kilos.”

Unlike the related apples or pears, quince release their delicious flavour only when preserved, stewed, baked or when its juice is extracted or processed to make alcoholic beverages. A similar amount of work is required to tend the area around quince trees. According to Rainer, municipalities’ parcels that are deemed ‘ecological account spaces’ can only be mowed from July and must be cleared of the green waste straight away in an effort to protect wildflowers and insects. He points to herbs that sprout finely: “The grass clippings would be detrimental to these shoots.” Rainer and Ellen planted some of their quince trees on areas elsewhere as well: on ecological compensation areas that are subject to less stringent eco-regulations and, in addition, on privately-owned areas, which they lease. The Laudenbach foothills are such an area and make a contribution to the ‘Blühende Badische Bergstraße’ (blossoming Bergstraße region in Baden) project. Similarly, the goal here is to remove green waste from the ground giving way to the formation of rough pastures high in biodiversity.

How was it that the native of Sulzbach, who is an industrial mechanic, and the nurse from Mannheim came up with the ‘Quittenprojekt Bergstraße’ idea? Rainer doesn’t hide the fact that his ‘burnout’ related to his position of head of a merchandise management department played an important role. At his family’s estate, where he started all over again afterwards, the Stadler family had been self-sufficient until the 1960s. Furthermore, there was a book by Monika Schirmer about quinces being an almost forgotten fruit variety that served as an inspiration for the pair. So they decided to wake up the Sleeping-Beauty rose family specimen. But it turned out to be easier said than done, because there were only few tree nurseries that had common varieties ten years ago—Constantinople apple and pear quinces, preferably. “So we began our project in a humble manner in 2009.” 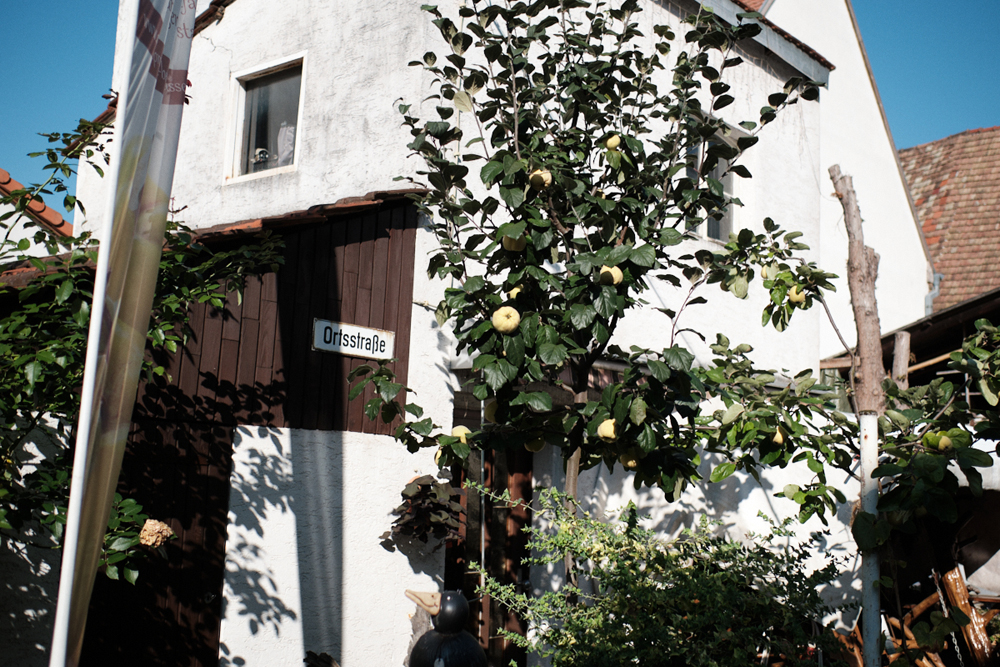 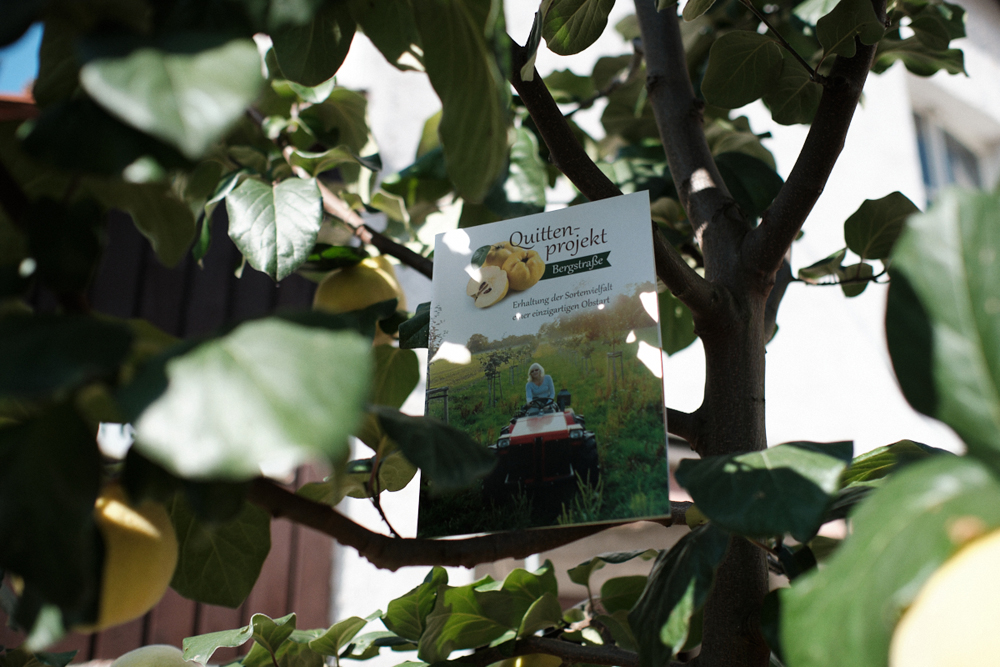 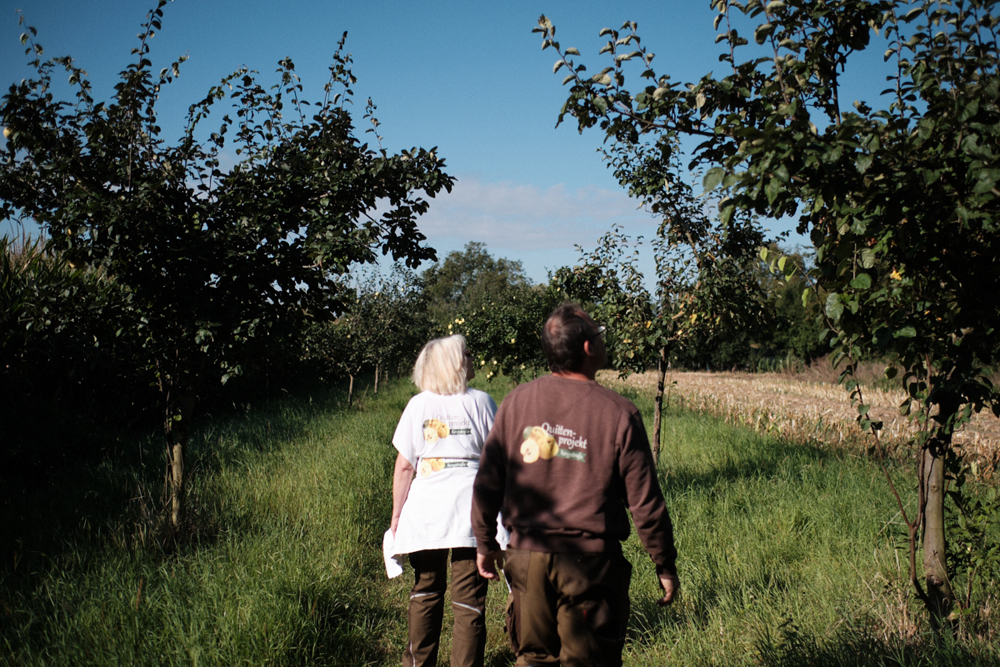 Their motivation: A greater variety in quince types. 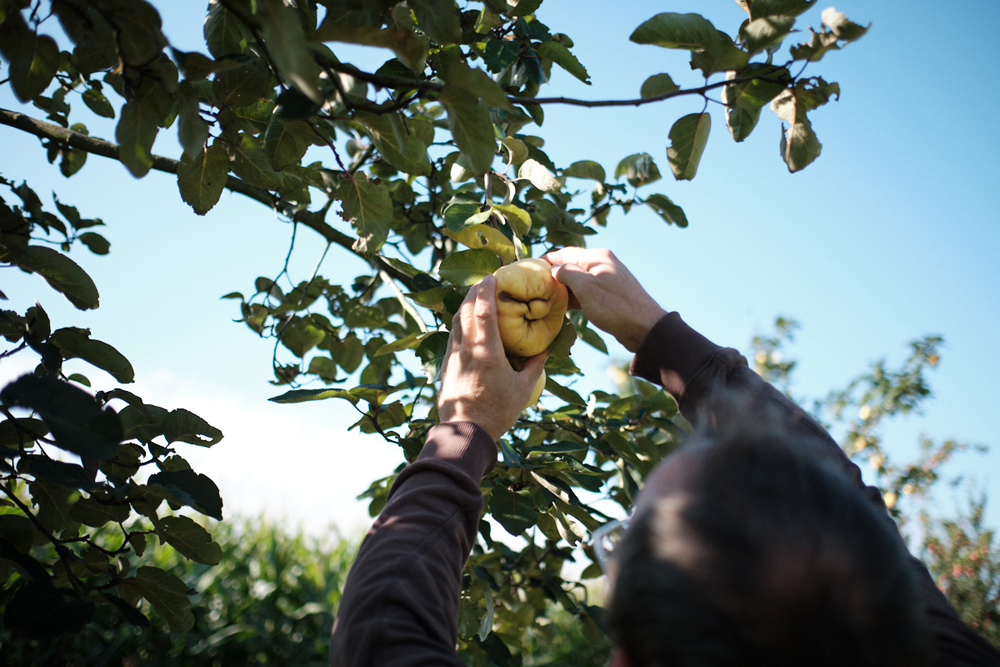 Today they have some 650 quince trees in 70 varieties. 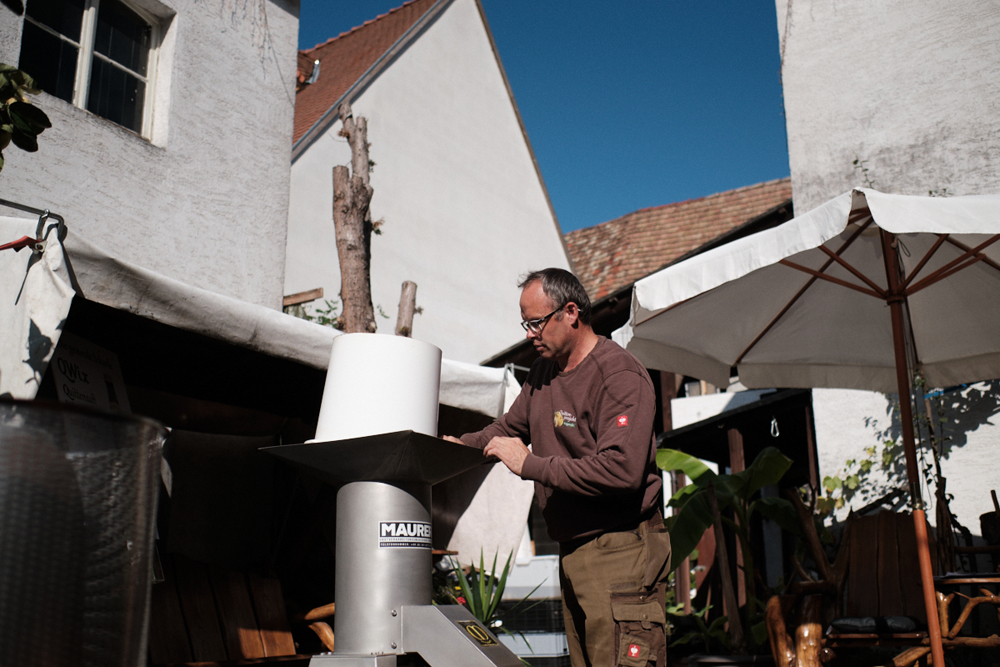 The rock-hard fruit tastes bitter in a raw state... 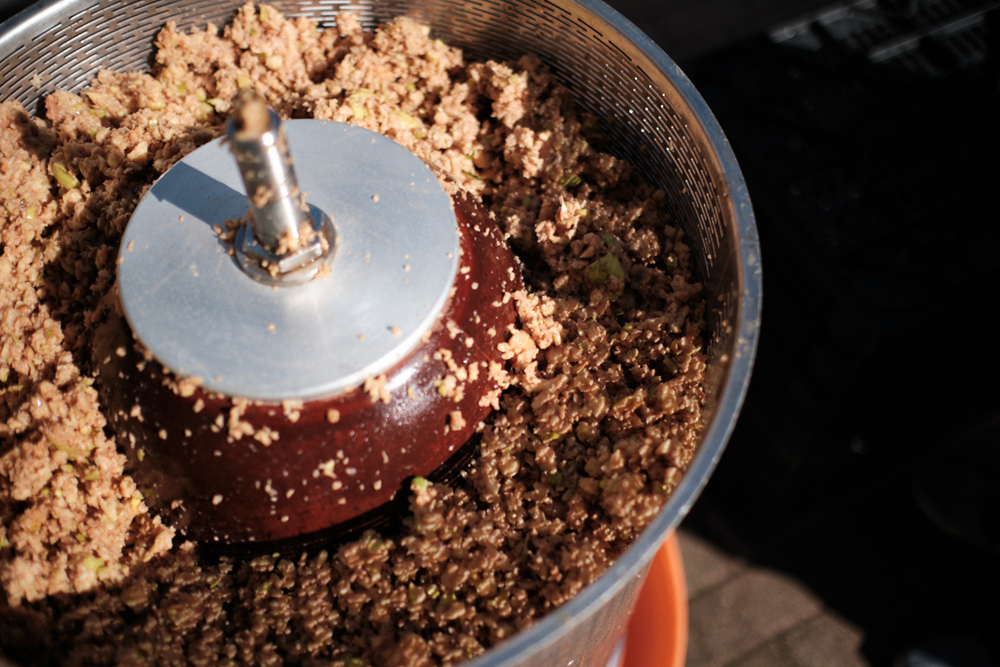 ...only ever releasing its delectable flavour when preserved, stewed, baked, or when its juice is extracted. 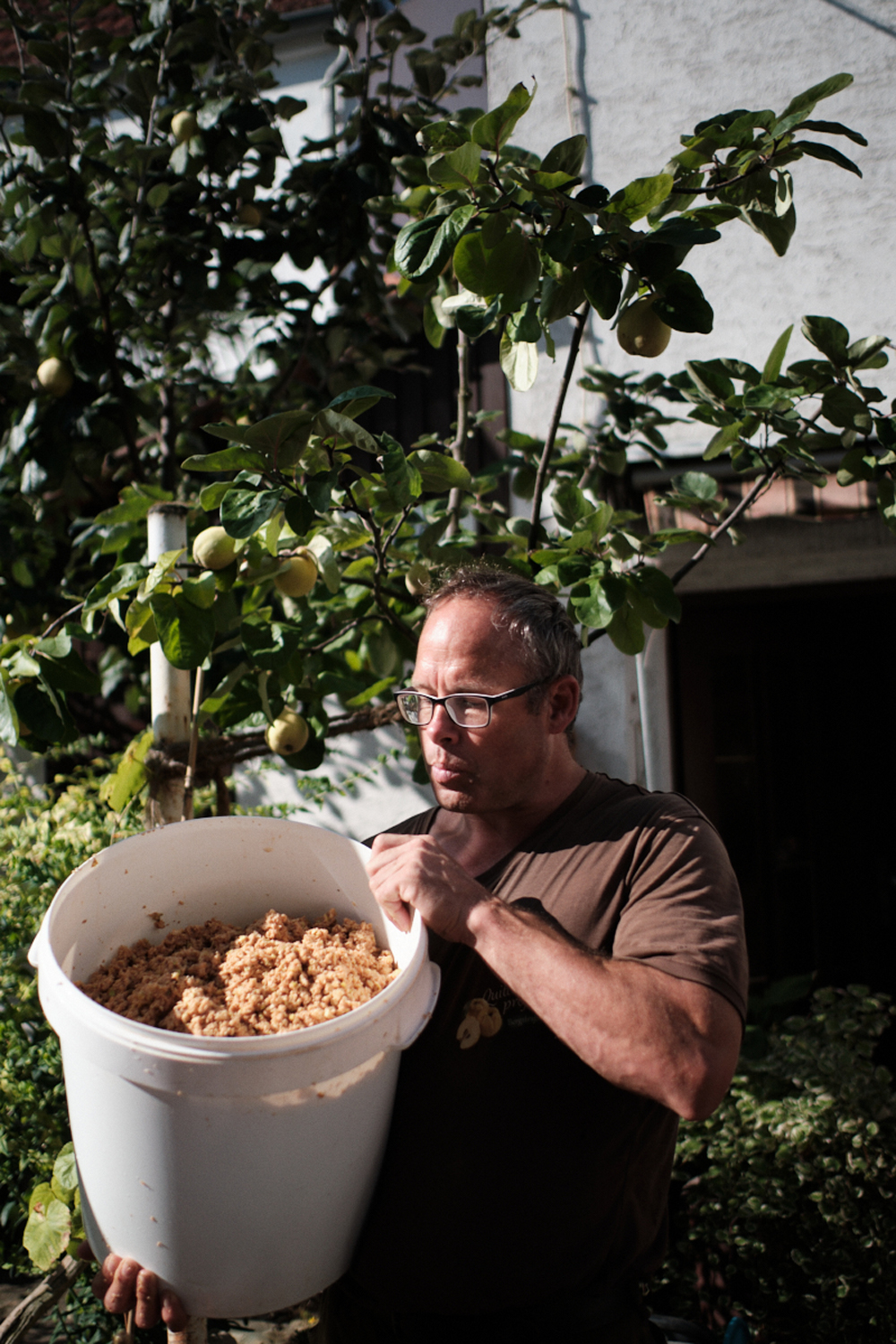 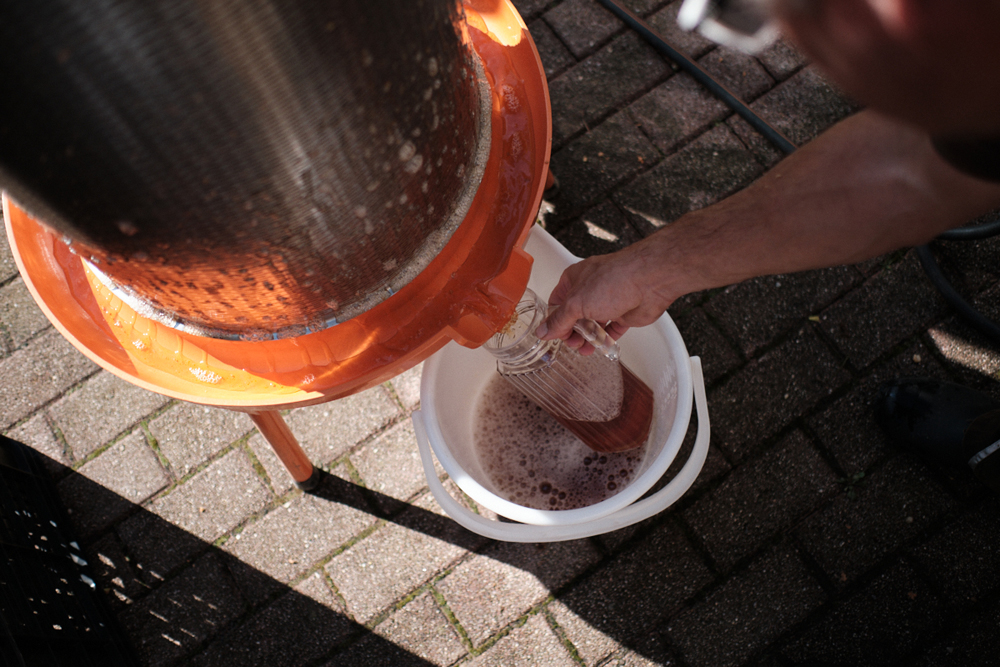 In order to reintroduce the quince in all its variety to the Bergstraße region, the fruit growers contacted the Federal Variety Office of the Ministry of Agriculture and sifted through the assortment of countless woody plant suppliers. Today they have some 650 quince trees in 70 varieties distributed over 14 areas with a total of 3.6 hectares. For example, the pear-shaped Leskovac, the Limon Ayvasi with a fruity-sour taste, the spicy-aromatic Muskatnaja and varieties such as ‘the rose dream.’

Their farm store, “my baby,” as creative product developer Ellen calls it, opened in 2016. Rainer gives a nod of assent. He takes care of the green spaces, plantings and sales. Initially, they sold only quince classics, such as homemade jellies “as people know them from grandma’s kitchen.” Later, when the local fair held a parade through Sulzbach, which had formerly been an independent municipality and has been a district of Weinheim since 1972, the quince growers decided to join in. Instead of throwing goodies, however, they handed out samples of their homemade juice as spritzers. “Many were surprised by the wonderful taste,” Ellen recalls. She knows only too well that quince juice is bitter if one neglects to carefully remove the fruit’s woolly down. When the local fair was over, there was an increased demand for the delicious juice. So she eventually added it to her range.

The core of the quince is removed and the fruit is finely shredded in a powerful chopping machine. You can observe how much and how fast the flesh of the fruit oxidizes: Within a few minutes, its light-yellow colour turns to dark brown. The hydro press does the squeezing. “If you’re lucky, you can squeeze 50 per cent juice out of quinces—with apples, the yield is usually 75 per cent,” Rainer comments.

Everybody who comes to the farm store for the first time is amazed at what can be made from quinces: from velvety spreads using the fruit puree to juicy varieties made from pure juice, from mustards to spicy chutney and quince balsamic vinegar. And even a sparkling wine made of quince, the ‘Quizz,’ was added to the range and has, ever since, pleased gourmets. Additives and preservatives are taboo. Only fruits from the region are additionally used in jellies and jams, because promoting regional foods is another motivation for their project—“no lemons or oranges are allowed.” The ‘Quittenprojekt Bergstraße’ project is a member of the ‘Genial Regional Heidelberg Rhein-Neckar’ association, which focuses on regional products. The goal: nature and landscape conservation.

In any case, the farm presents itself in an exotic way, at least at the entrance gate. Many years ago, Rainer planted a Japanese banana tree there, which obviously thrives in the climate of the Bergstraße region. Rainer and Ellen work seven days a week during the planting and harvesting seasons and they have been running an online store since 2017. But nevertheless, the quince project “to preserve the diversity of varieties of a unique type of fruit” is still struggling to be profitable. “The profit margins are just too low,” says the fruit grower, who has switched to organic farming and has started a company to capture the readings of meters as a means of support for a living. “Luckily, the company-related work is due mainly in wintertime.” Ellen explains that she contributes a widow’s pension as well. And if there was such a thing as a golden quince fairy, what would they wish? “I’d wish to be able to open a café,” says Ellen, who already sells quince cakes. So far, she says, catering in the idyllic courtyard has failed due to a lack of parking spaces in Hintergasse road in Sulzbach. And Rainer? He’d tell the fairy his vision of a quince educational trail along the Bergstraße road. 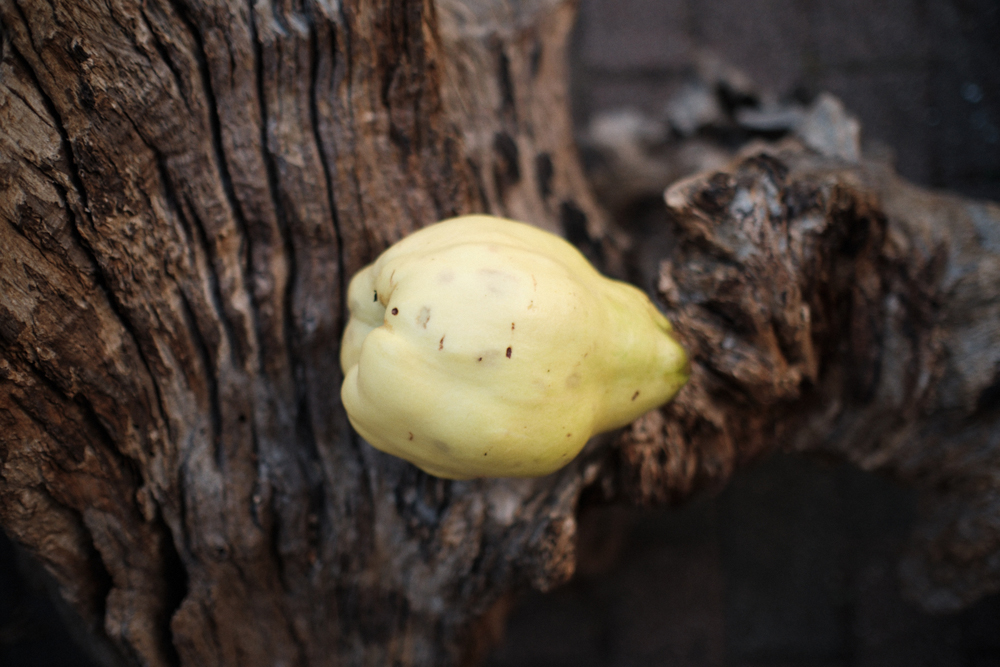 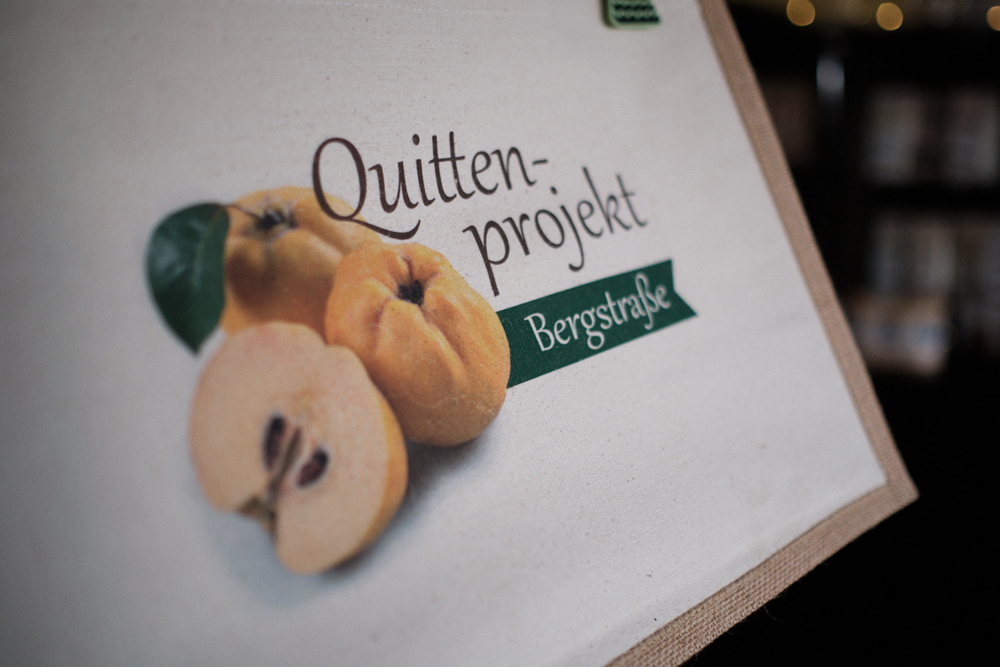 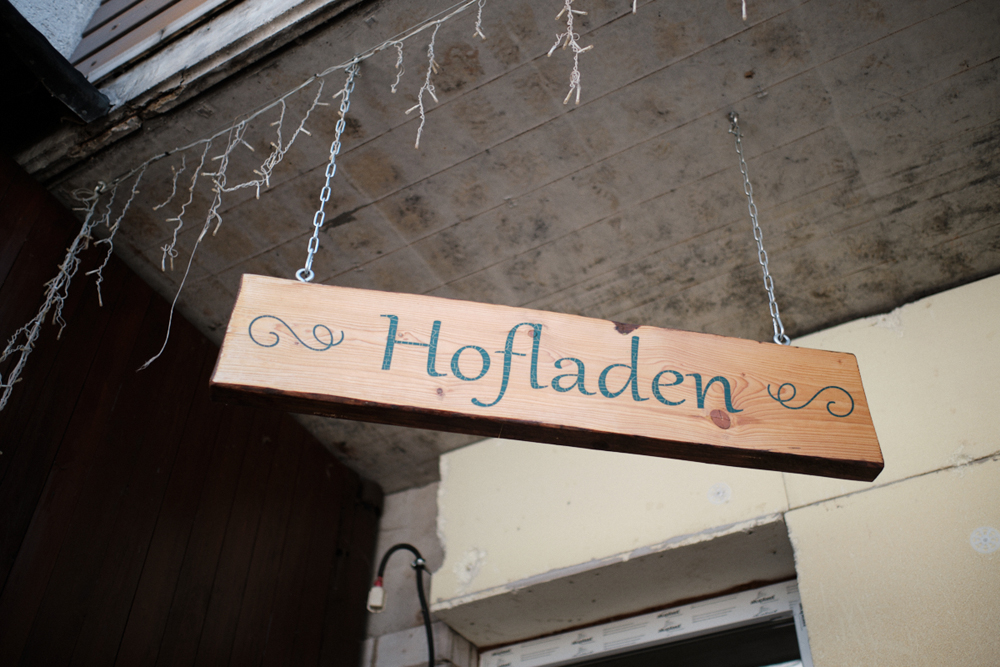 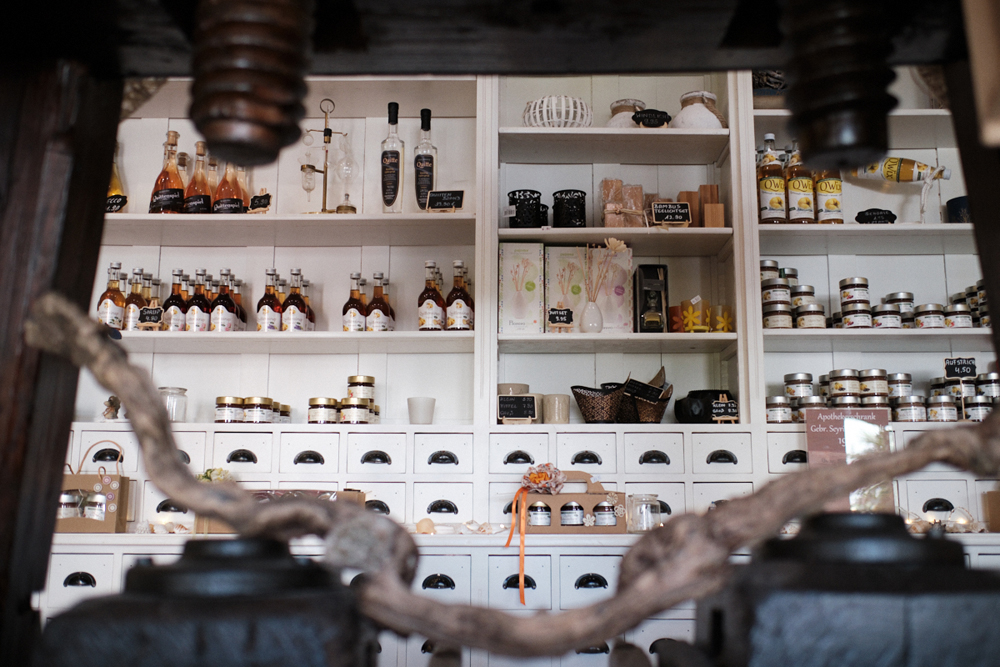 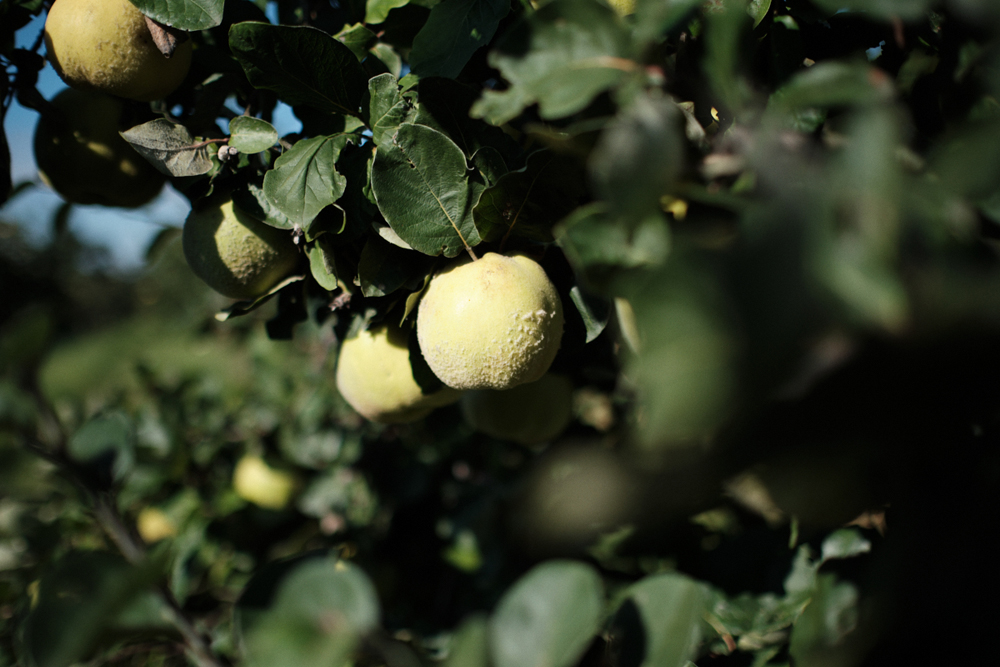 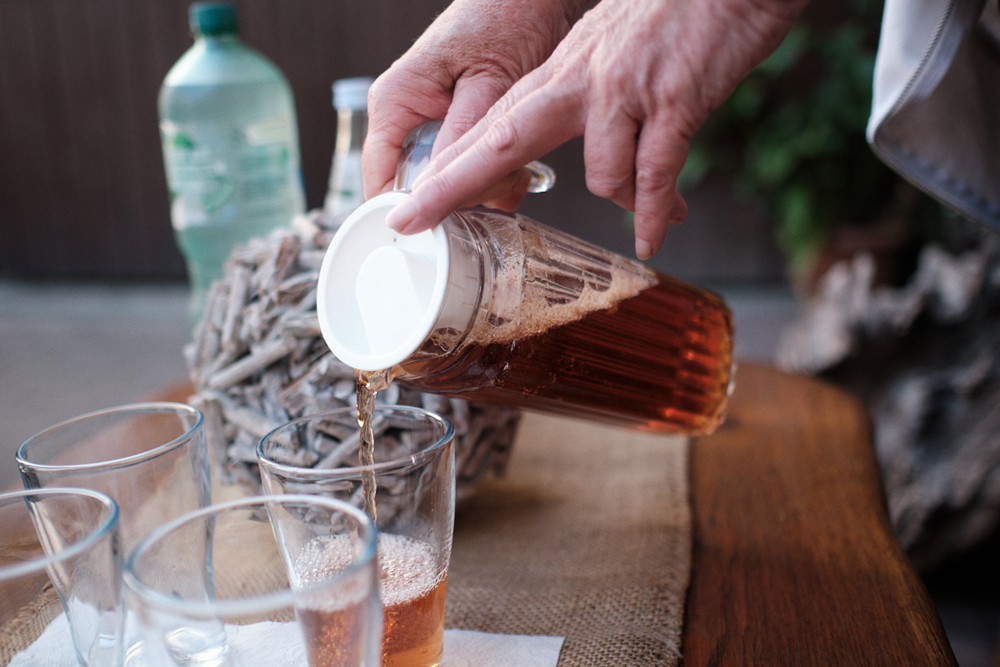 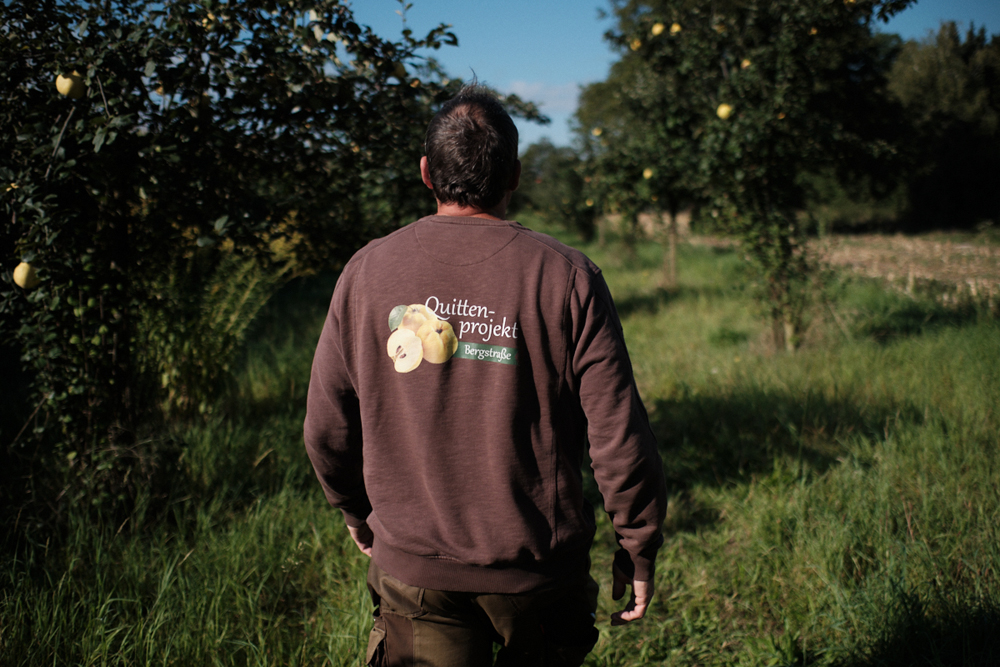