Not far from Osterburken, a reconstruction of a medieval village has been built—with lots of attention to historical detail. Doro Braun-Zeuner wants to pass on her knowledge there. And she wants to do away with the stereotypes about the alleged Dark Ages.

The precious food is hidden inside brown skin. Doro Braun-Zeuner grabs one of the dry, longish pods from the basket and breaks it open with her fingers. Light-green broadbeans come to light—an essential source of proteins at a time when meals often used to be meagre. In the other basket there are little shallots. So, this year’s harvest was no disaster, even though the quince has dried out and the grapes were killed by frost.

Doro is a farmer here on many weekends during the year. From Monday to Friday, however, she works in an institution for people with disabilities. But when she and her husband take the car towards the Bauland region, they do not only travel through space be also through time. They make their way back to the Middle Ages: to the Histotainment Park Adventon near Osterburken, into the little house with the vine branches and the little field next to it. They till the soil only with a hoe and a spade and sow only plants, which had also rooted itself here some centuries ago. “People sometimes advise me to plant potatoes here. Apparently, they break up the soil. But this is not possible,” says Doro shrugging her shoulders, because the starchy tuber hadn’t come to Europe until the second half of the 16th century.

There are about 80 persons, who make up a colourful community: families and single persons, skilled craftsmen and people from a scientific background. In a joint effort they build a reconstruction of the world in the historical epoch on a seven-hectare venue using tools, techniques and materials from those days. Their intention is to create a rather authentic environment without the folkloristic edge of medieval markets. Visitors to the village can watch how the settlers do their work every Saturday, Sunday and on public holidays between April and the end of October. As a visitor, you first walk across the court of the Landgut Marienhöhe estate with its exhibition rooms, catering and a market hall. A narrow pathway known as the Nadelöhr (eye of a needle) leads to the open-air terrain, where net coverage is poor therefore the past has resurrected itself. 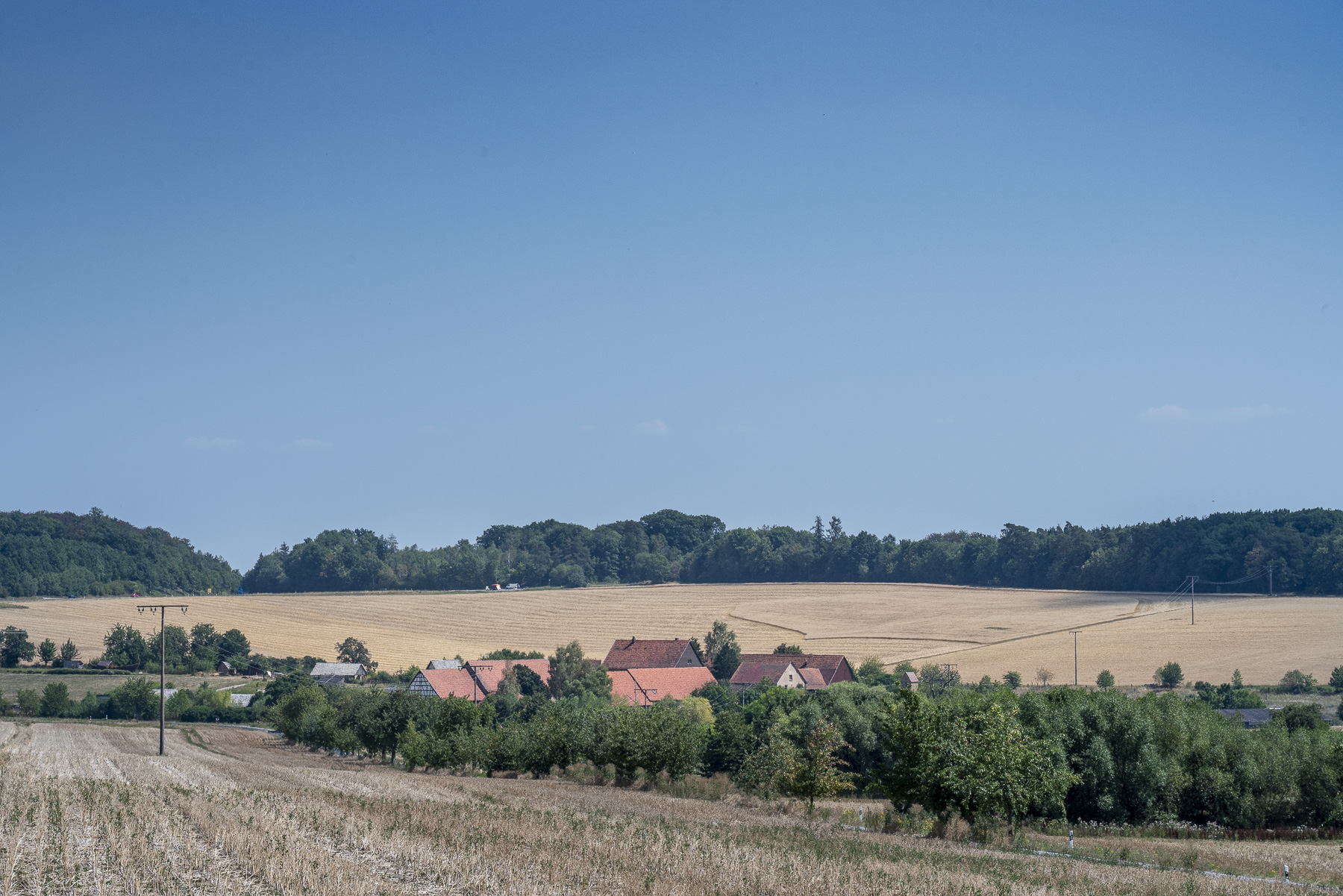 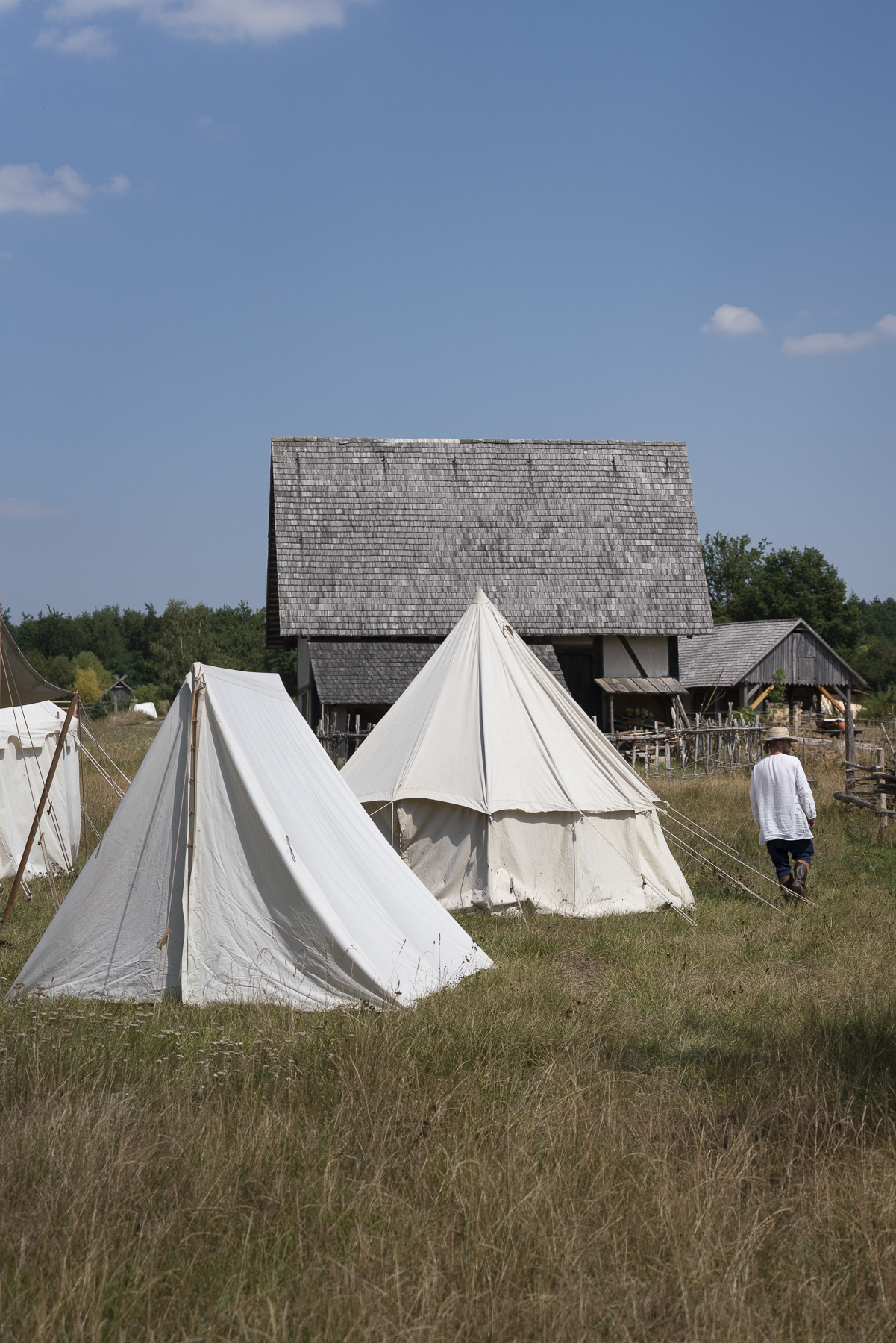 A journey through time... 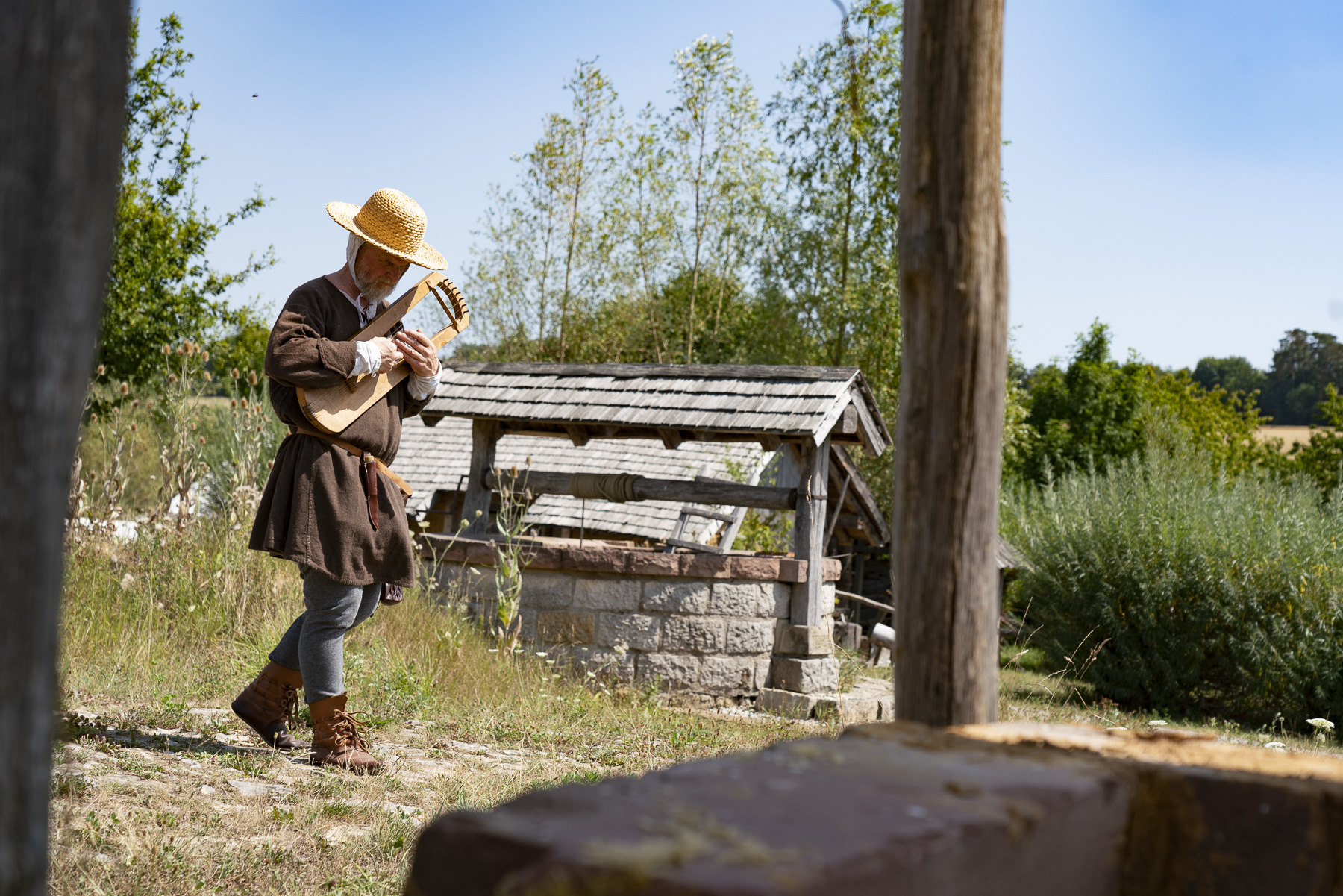 ...with lots of attention to historical detail. 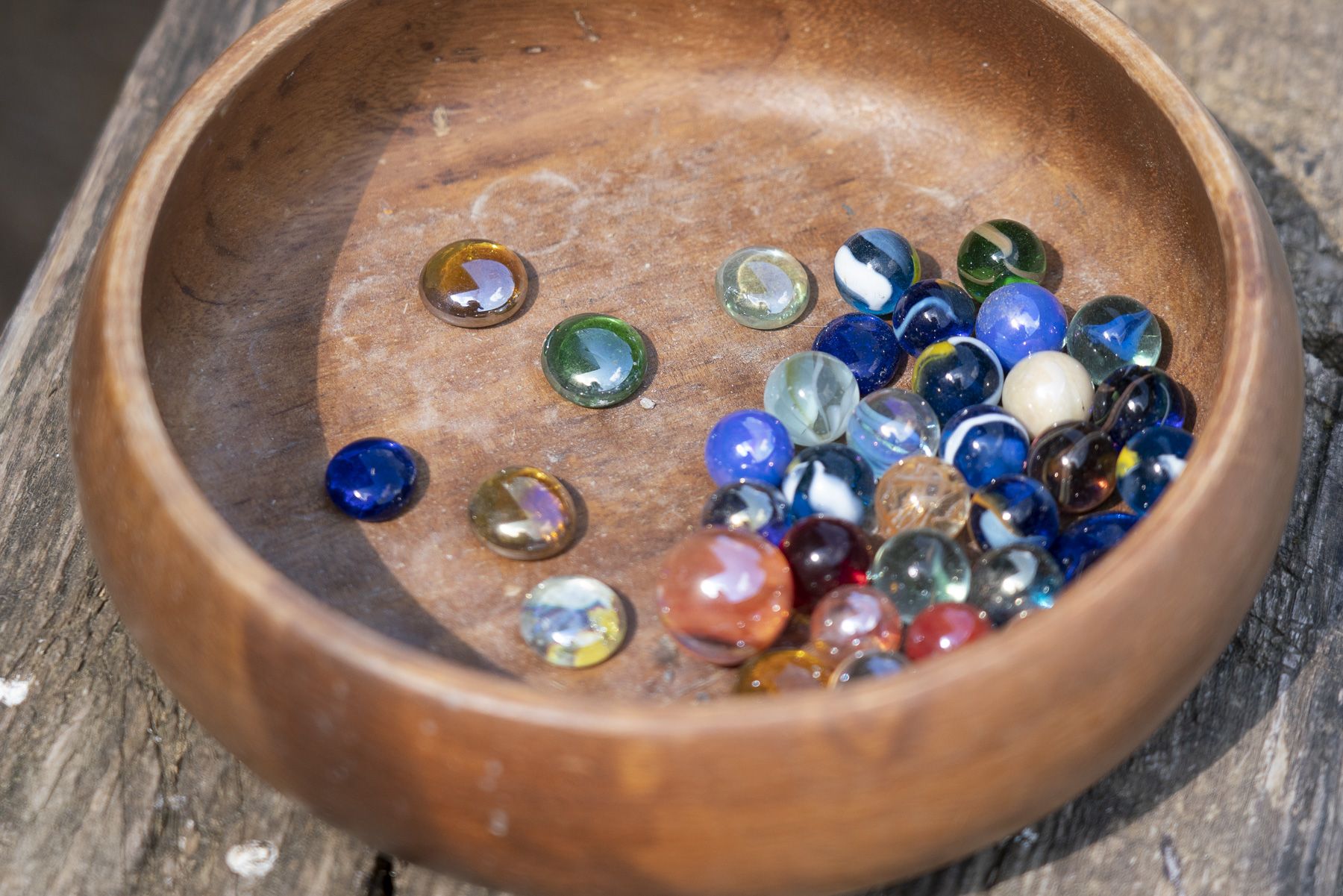 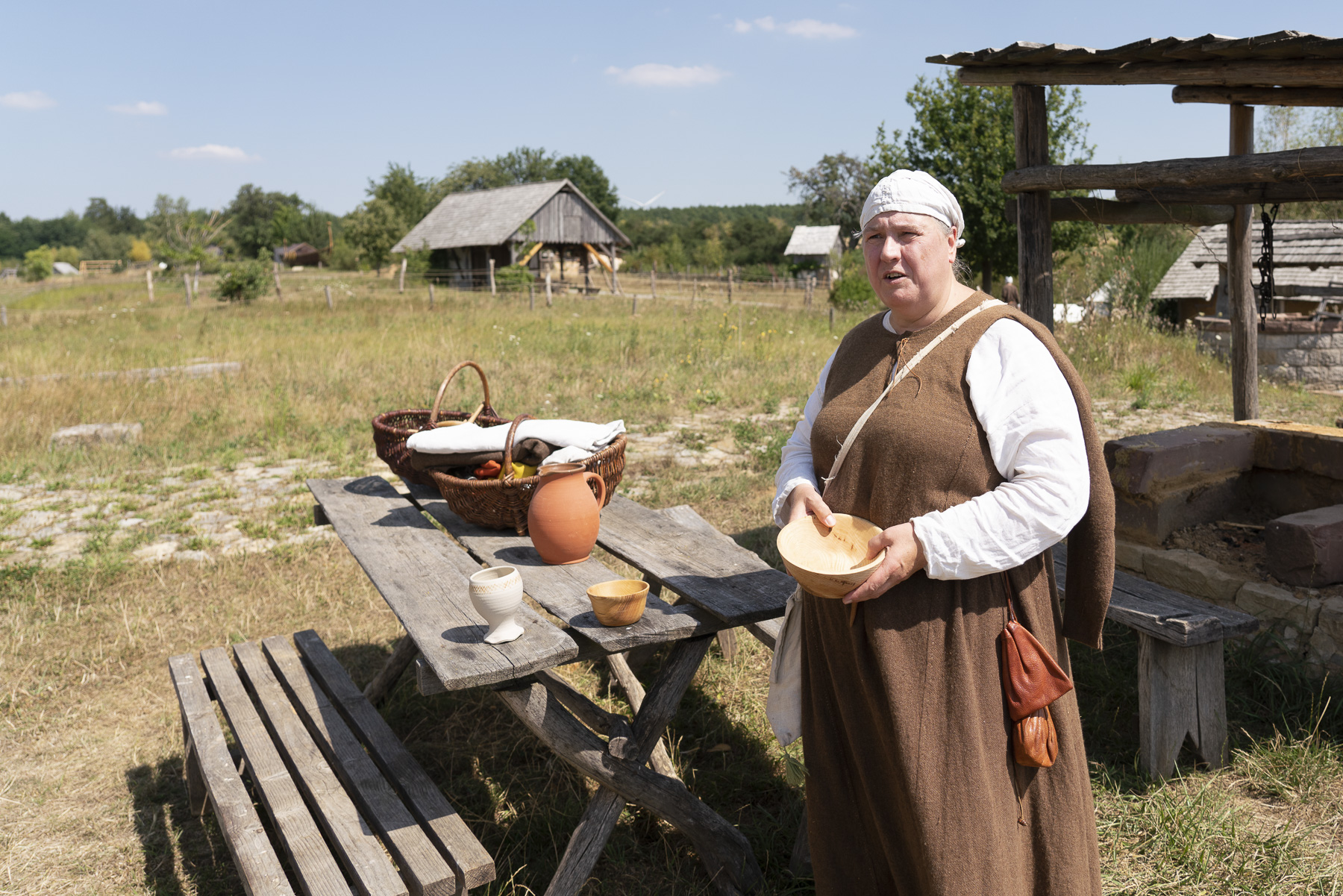 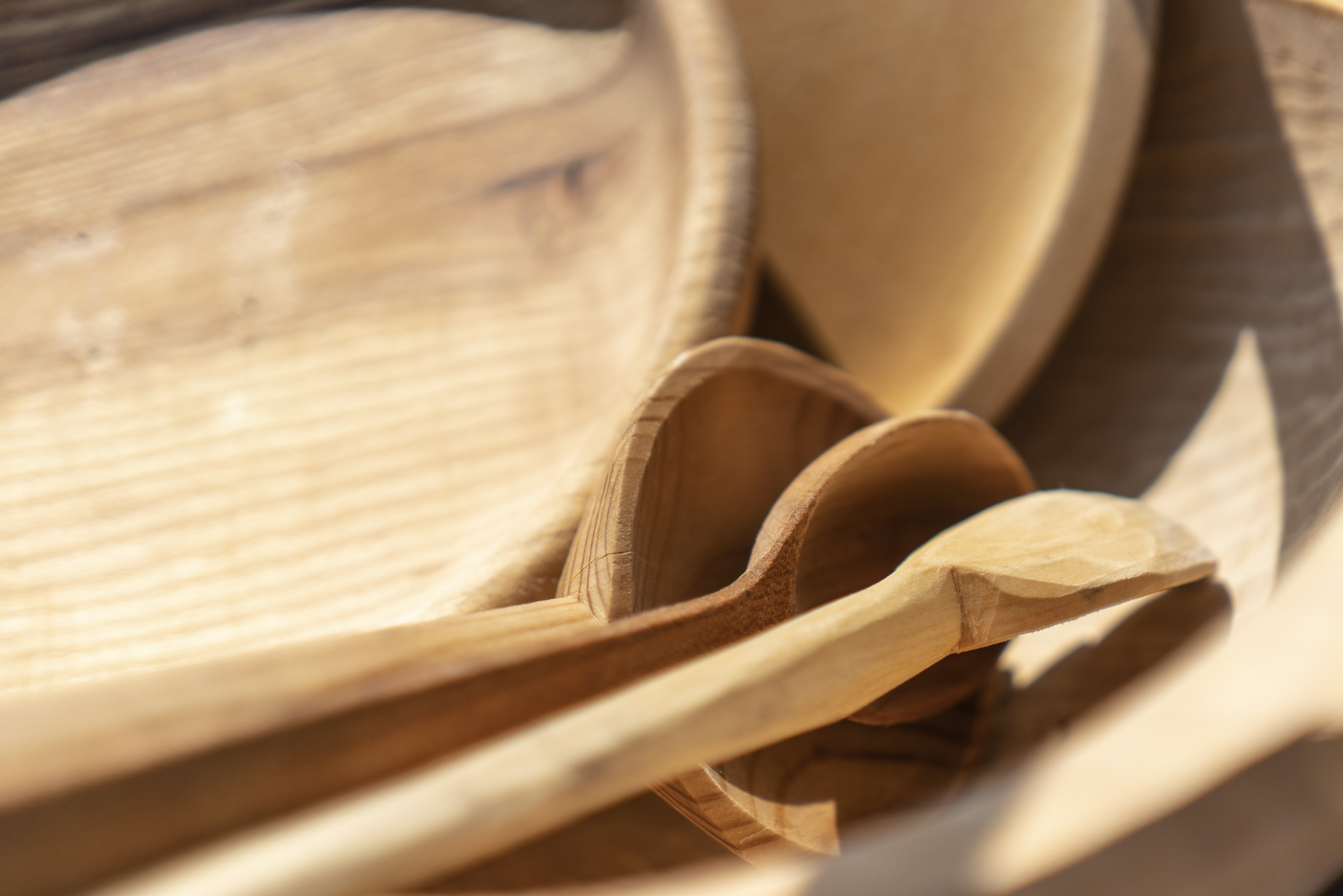 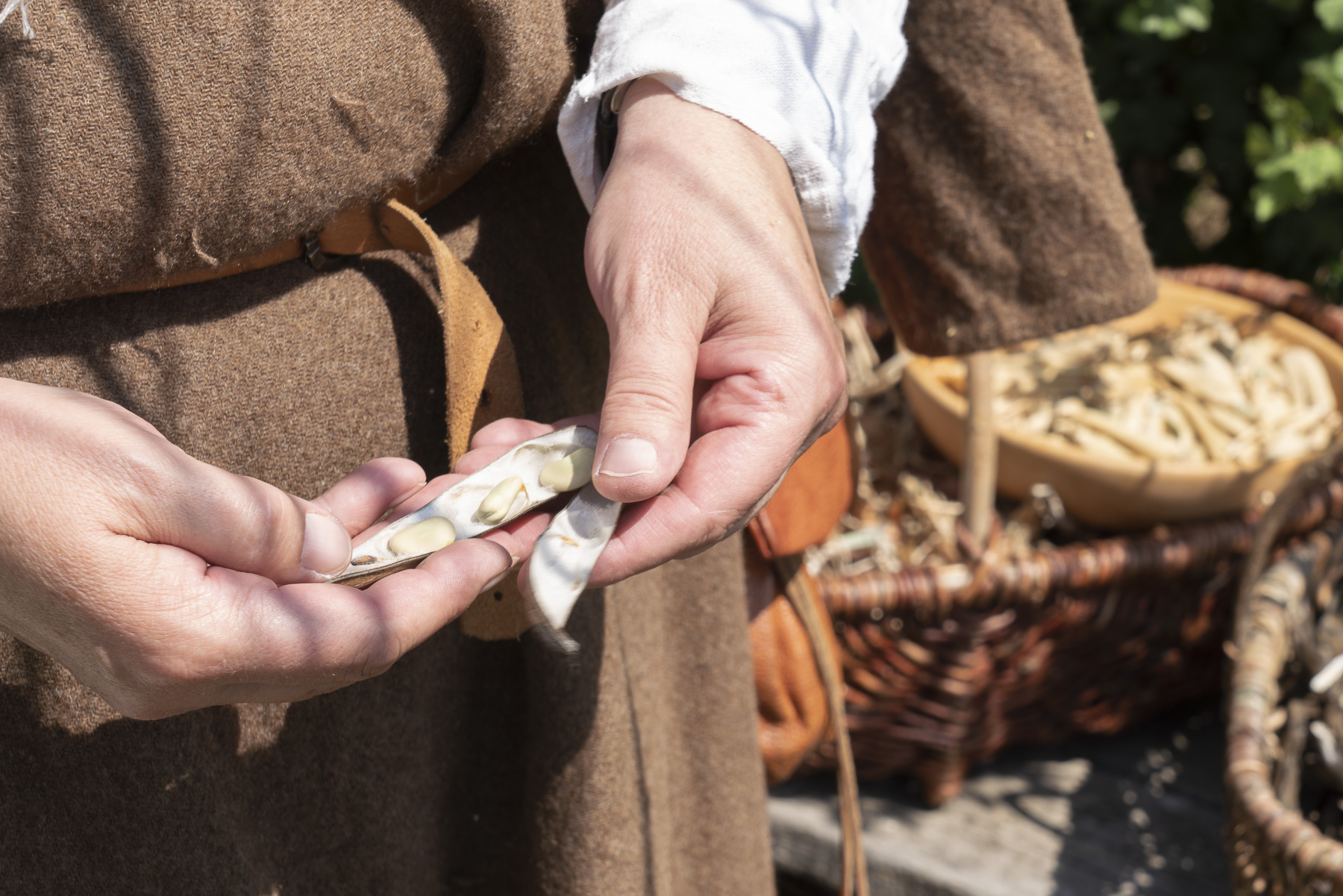 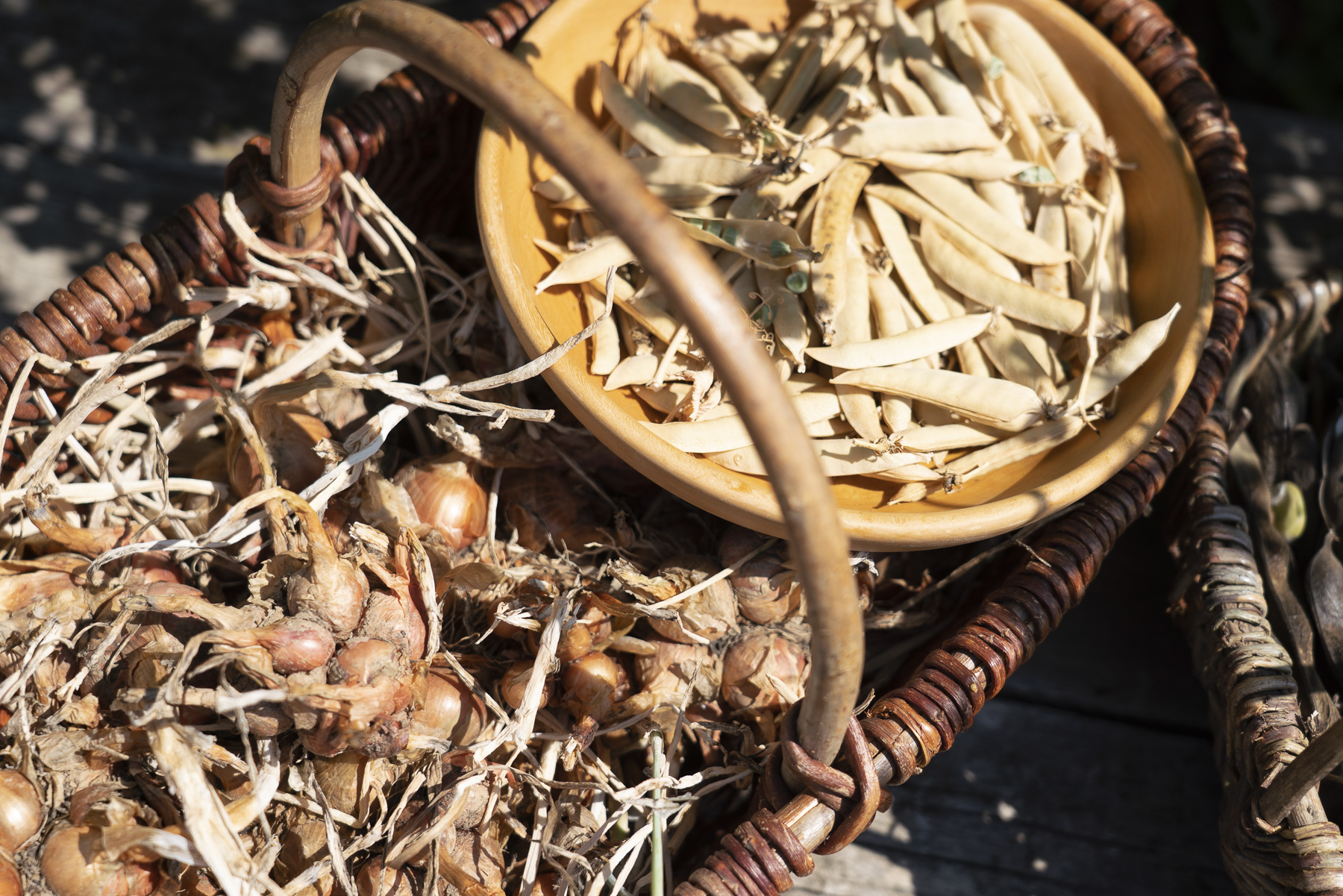 —an essential source of proteins at a time when meals often used to be meagre.

A pioneering group of people started this project in 2005. Doro joined them in 2007. In the beginning, she helped weaving fences or claying house walls. Then, in 2009, she and her husband took a little house from an acquaintance. You don’t necessarily have to build something, if you want to acquire the title of settler and lease a plot of land here. You must, however, submit an application to the trustee and the Adventon warden—and contribute something: an idea how you want to get involved, a subject you want to dedicate yourself to. During her work on her parcel of land, Doro gets into conversation with the visitors, who go on and on presenting her with new questions: In which way were things done back then? Which solutions did people come up with? “It is then that I want to pass on what I have learnt,” she says laughing. “Some people do Sudoku, I do the Middle Ages.”

When you call something medieval, there is a negative undertone to it. The age between the classical era and the Modern Age appears gloomy to many people. Doro can’t make sense of this view. “The Middle Ages were quite colourful as well,” she explains referring to colourful dresses that used to be worn on festivals or knowledge that was preserved and created mainly in monasteries and that mankind built upon much later.

There is no way you can speak of darkness today anyhow: Glaring sunshine lights up the fields, meadows and hedges as well as the little half-timbered houses. However, Doro wears a robe with long, bright sleeves and brown, woollen self-made slip-on sleeves. No need to feel sorry for her, she assures us: medieval clothes are even more comfortable than modern clothes, because “genuine linen or hemp soak in the sweat, which then evaporates with a cooling effect.”

You usually start as a volunteer, if you want to put your hand to the plough on your own parcel. “You might misjudge the task otherwise,” says Doro. She and her husband come here every fortnight and the garden has to do without them in the meantime. There are three barrels behind their little house—“when they are empty, they are simply empty.” However, a number of fruits flourish on the little fields that will soon be surrounded by a protective whitethorn hedge: Swiss chard and garlic, for example; or plants that were used in the processing of fabrics, such as camomile for colouring and Weber-Karde (weaver’s card), using its hard syncarp tips to nap fabrics.

On “Wotans Wiese” (Wotan’s meadow), fans of history from foreign countries and across Germany gather every year and reconstruct a medieval battle—without any casualties, of course. In the settlement, there is even a baking oven made of clay and a smithy for metal processing with a hammer above a baked flame. And there is the ‘sound workshop,’ where Markus Kunze carves out lyres from a single piece of wood like it used to be done: with six strings and a symmetrical body. When Markus grabs an instrument, melancholic music sounds through the glass-less windows. These sounds remind everybody of the Middle Ages—even if you haven’t experienced this period. What it is that fascinates him about the project? “We return to the basics here, get away from all the technology,” Markus explains his motivation. “You can unwind and relax. This is quite something.”

The medieval settlers approach the time period not only from sources in books. They rather put themselves in the place and the every day life of those people, face their problems and look for solutions. It’s not always easy to reconstruct the past. The houses used to be roofed with dry reed. In the Middle Ages, this plant used to grow virtually everywhere. Today, you can hardly find it outside of nature reserves. The construction of the typical half-timbered houses made of wooden beams and clay walls is also a challenge. From the first building in Adventon in 2005, only the roof remains today. “We sit on clay here,” explains Doro, so the first buildings began to rot at the bottom. Later, buildings were erected on a stone foundation. The walls have to be treated with a protective lime layer practically every year, because they are constantly affected by the ravages of time.

So, there is always something to do in Adventon—forcing the medieval settlers to potter and fiddle about and try out. Probably for a very long time. Doro summarizes: “This here will actually never be finished.” 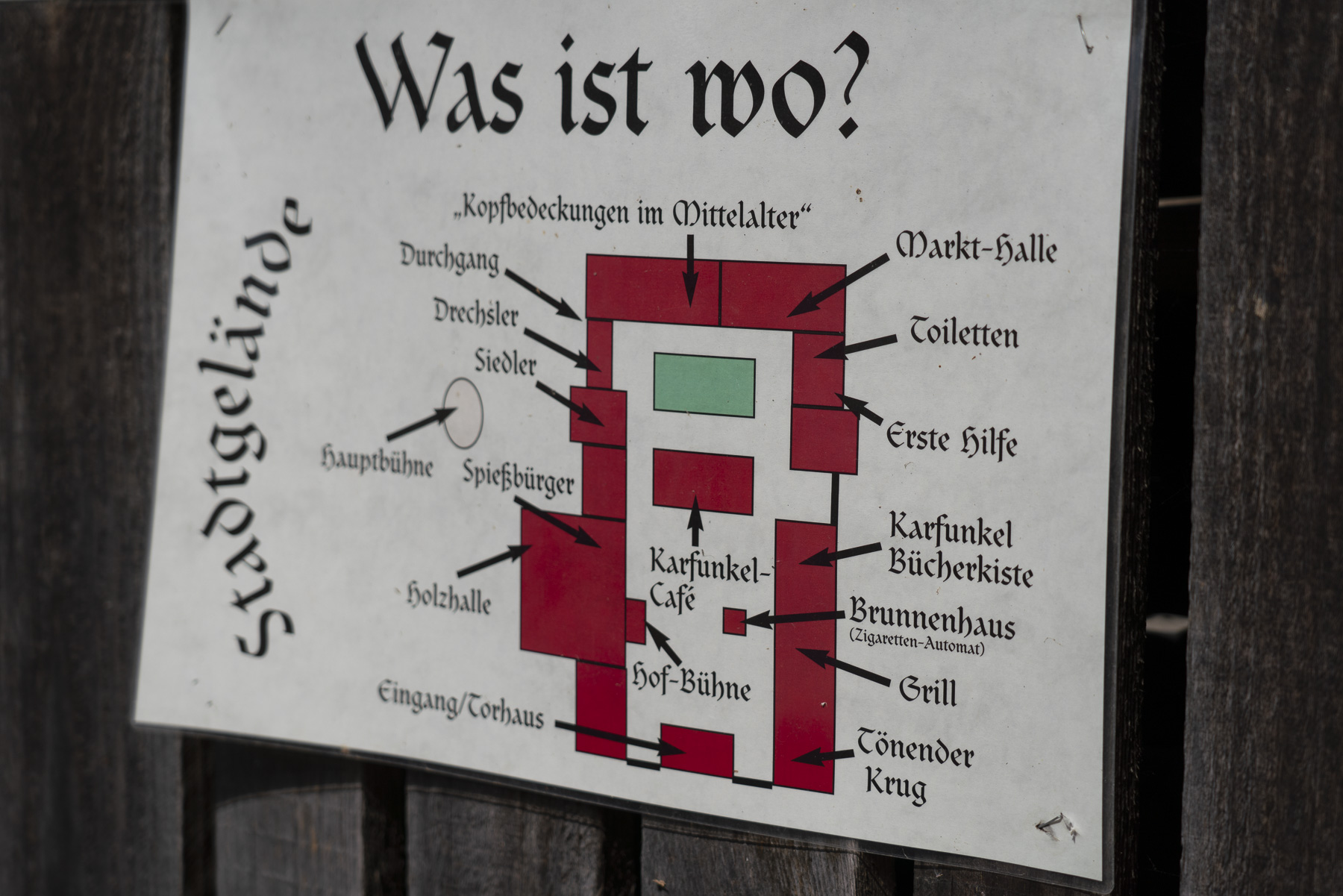 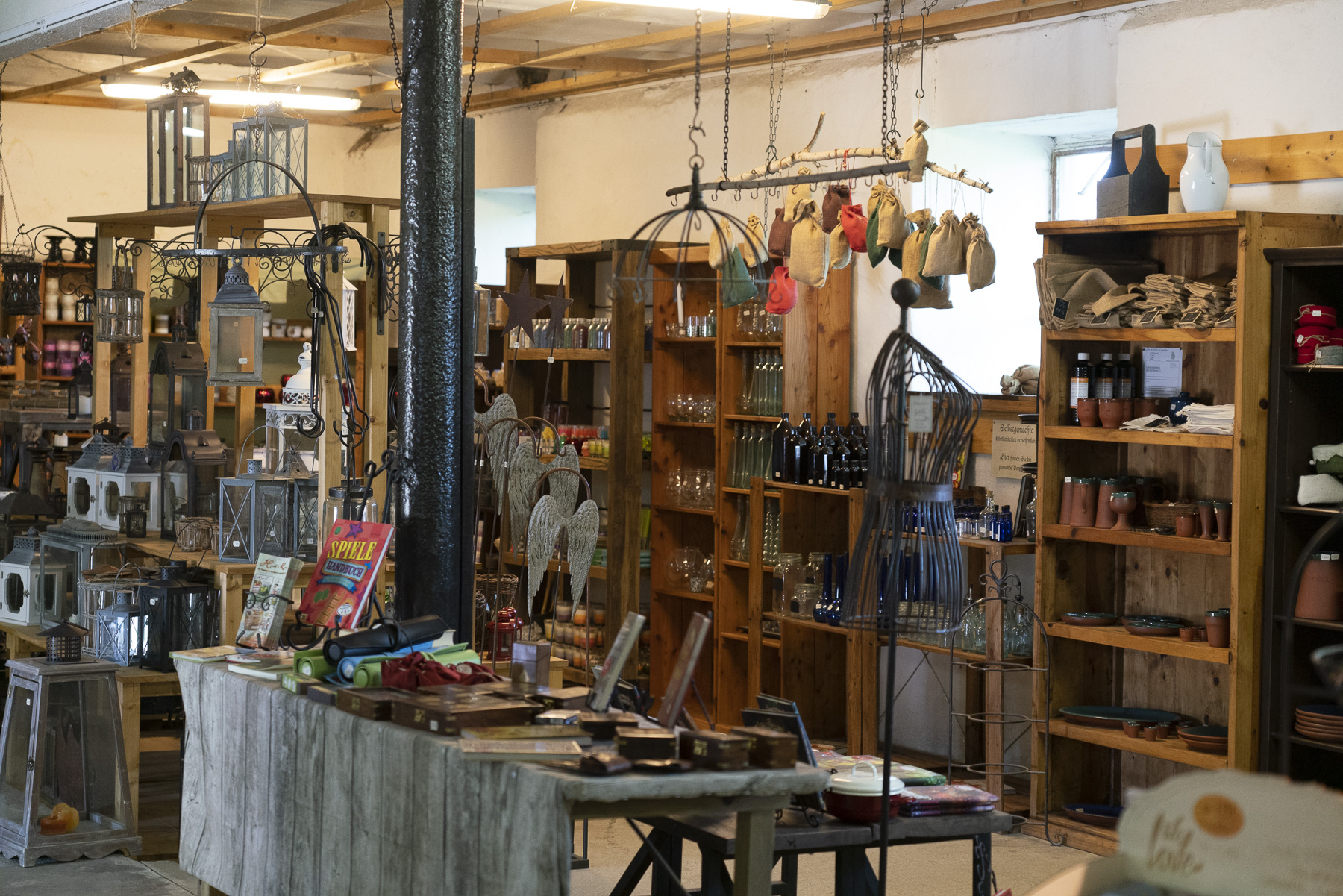 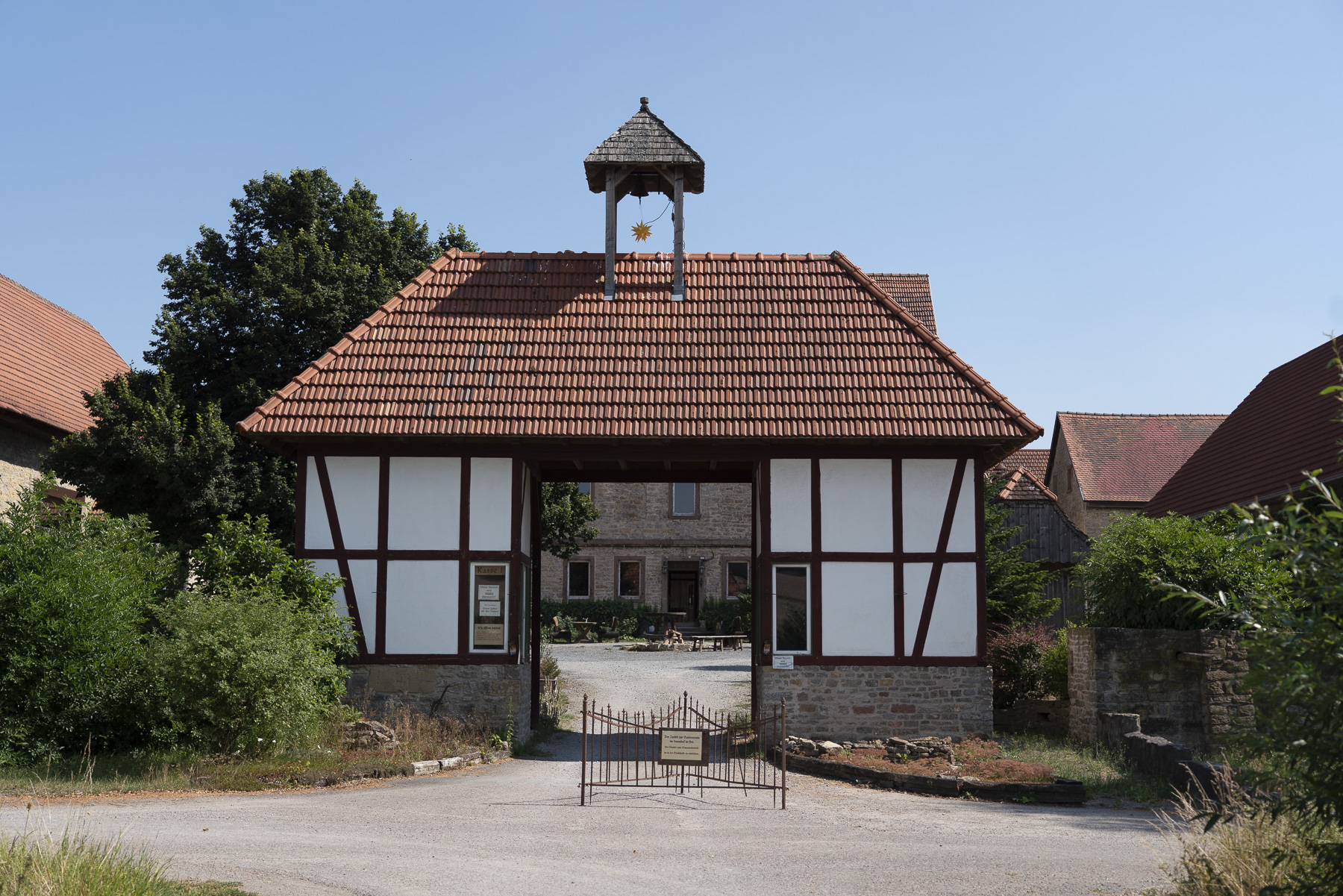 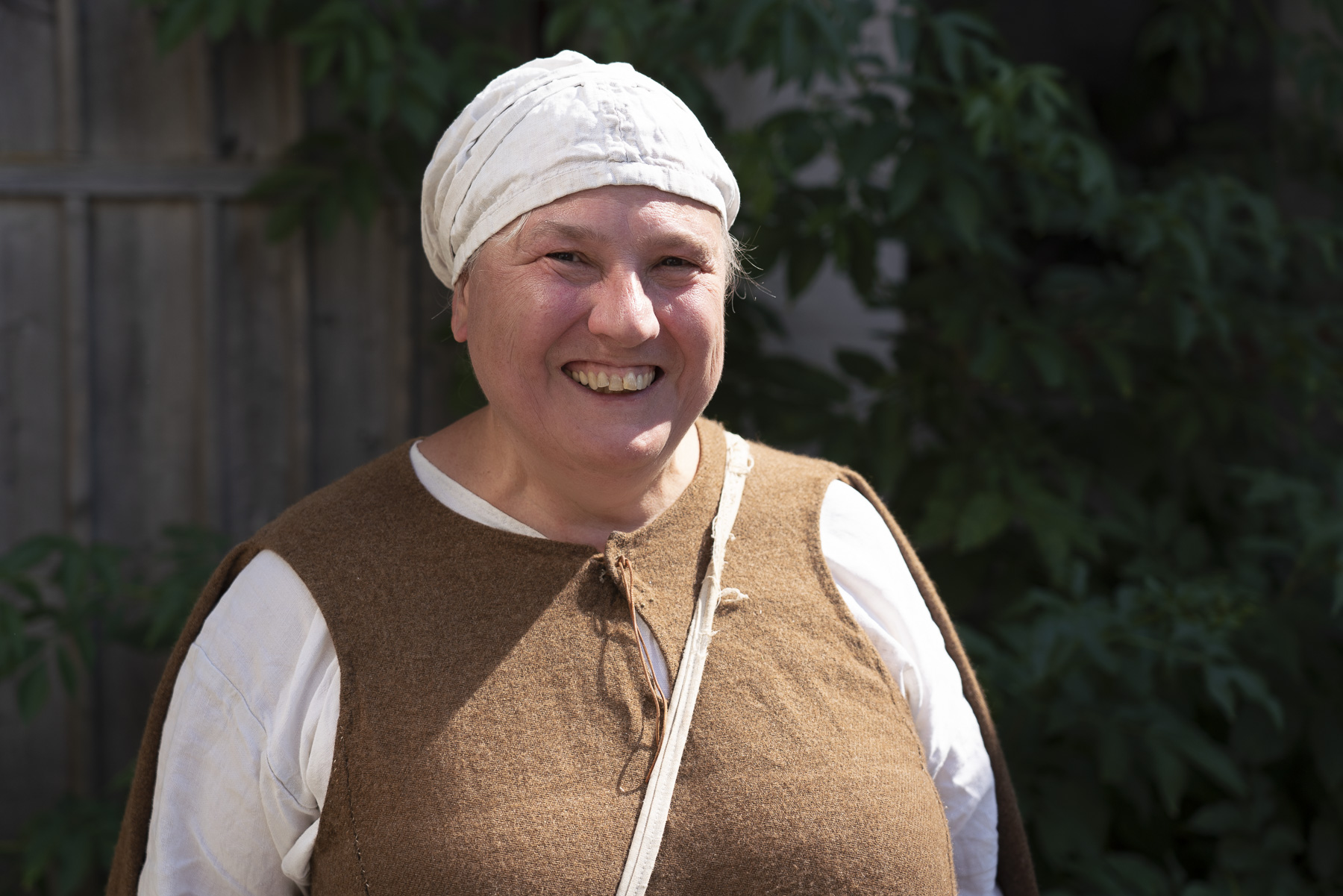 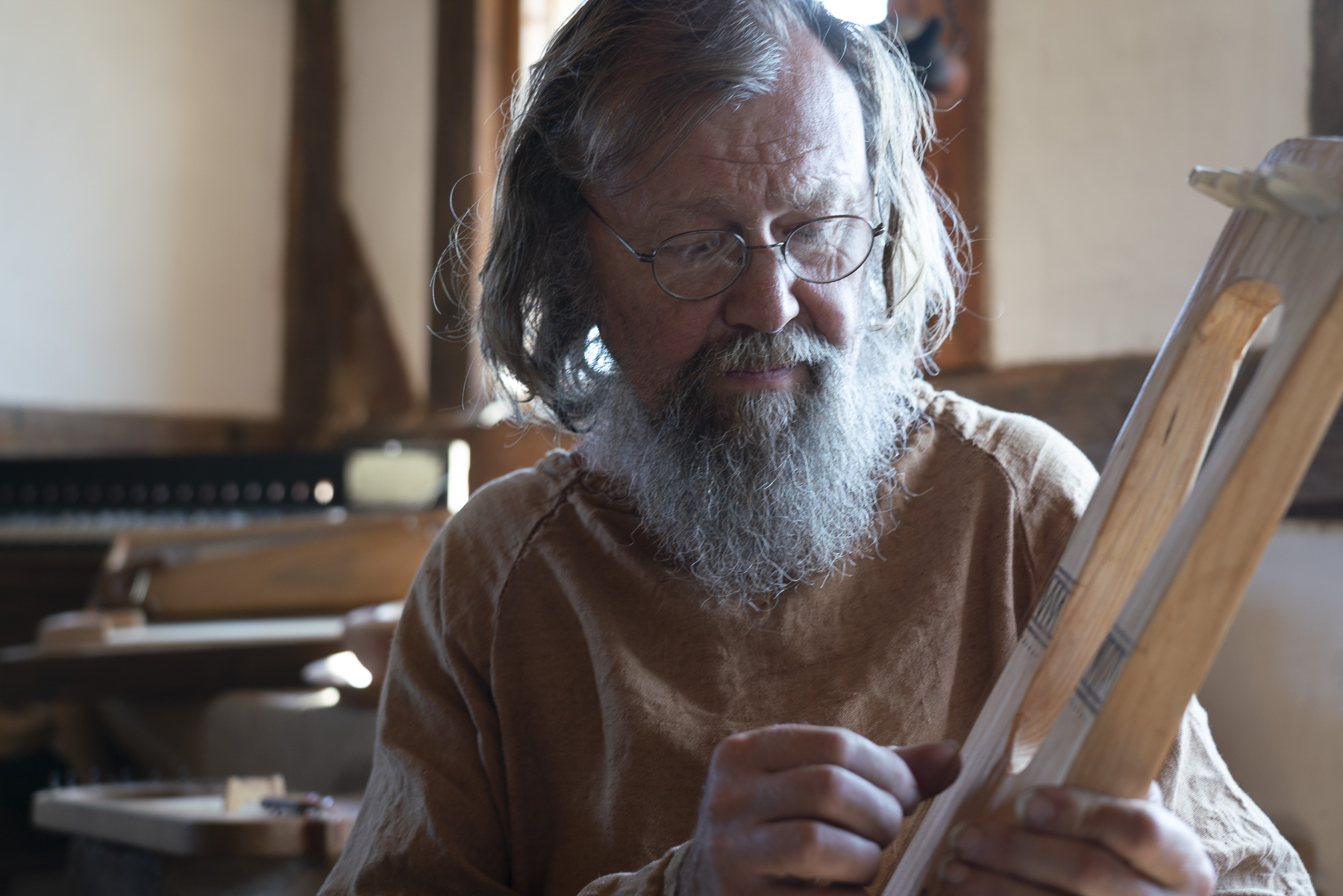 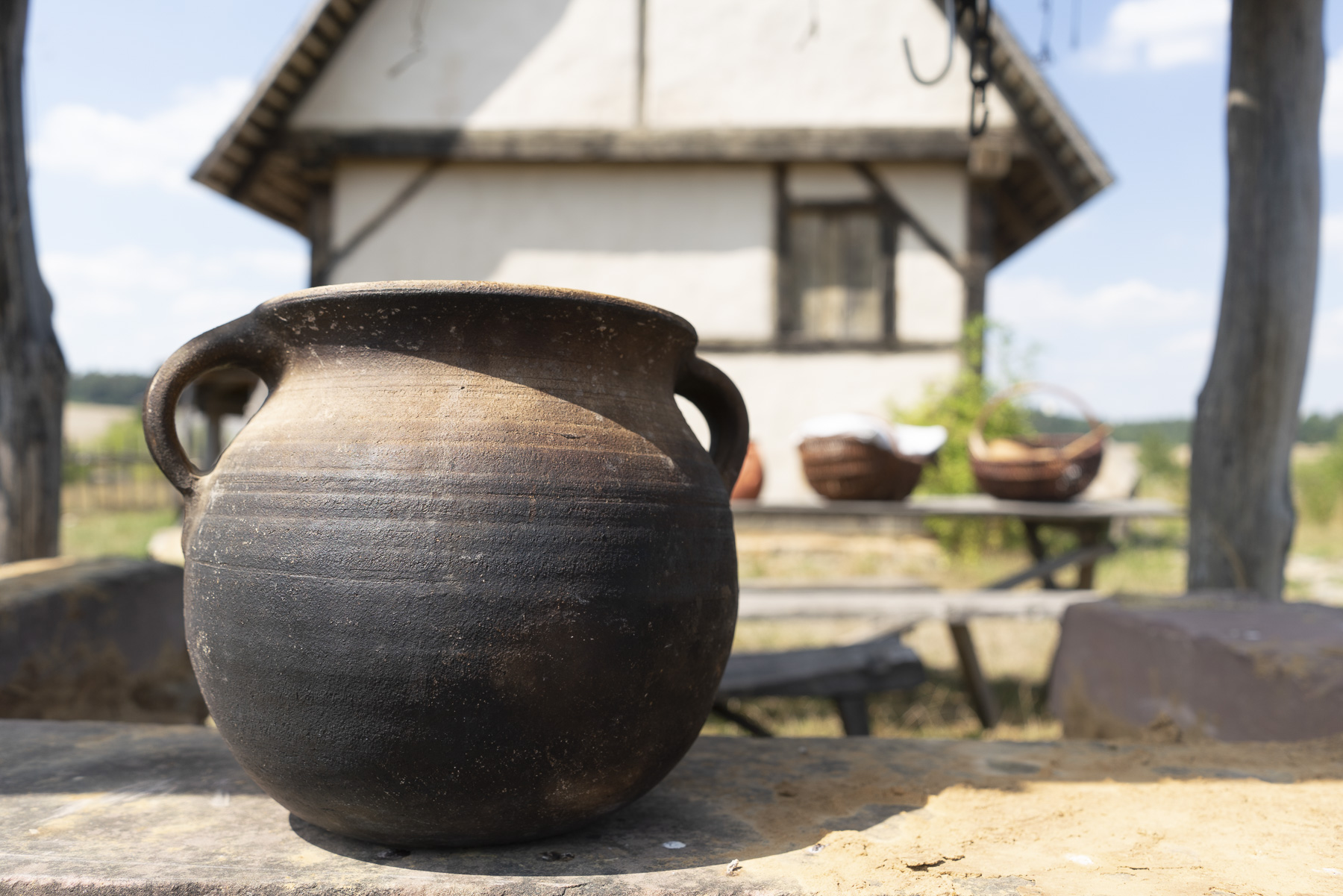 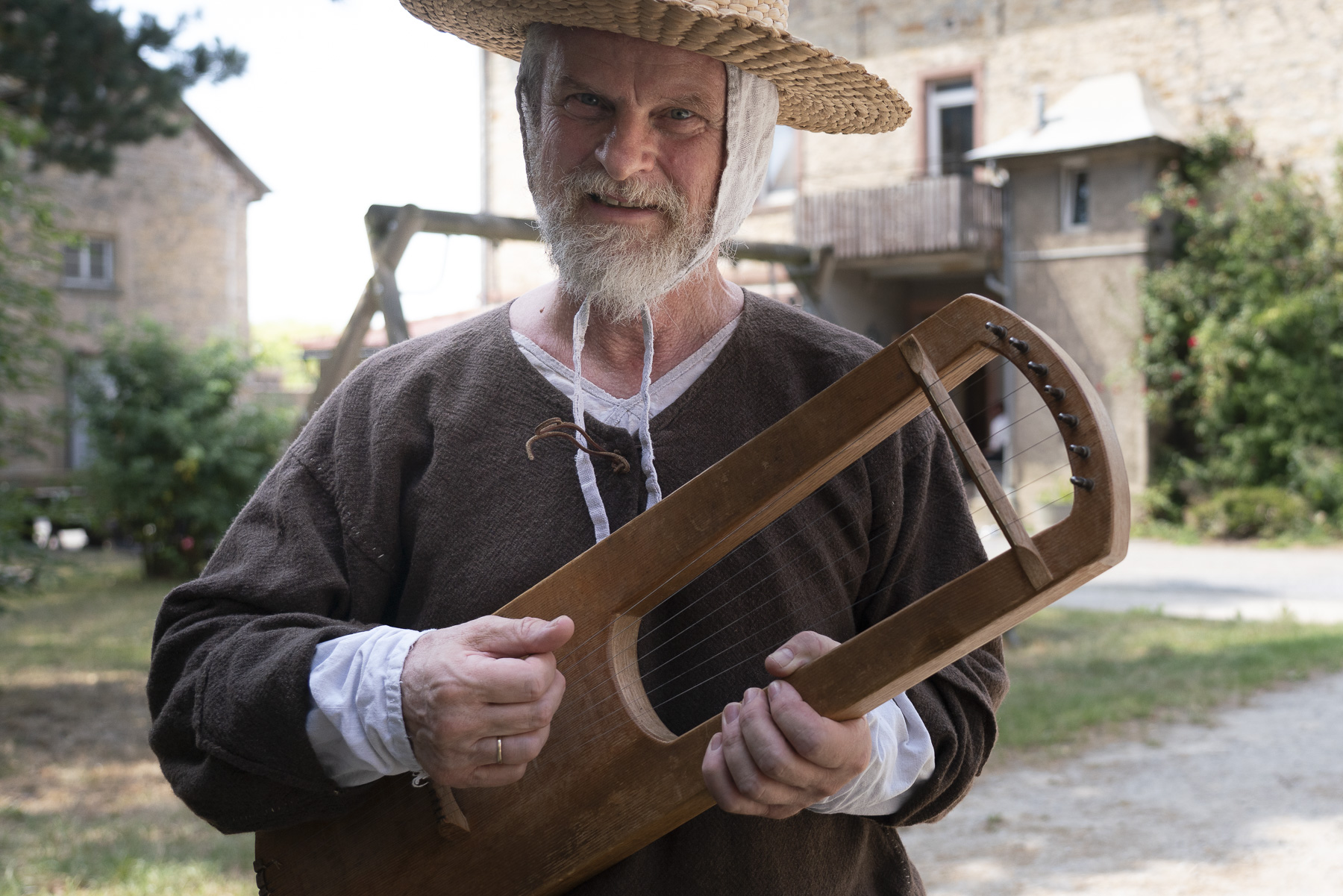 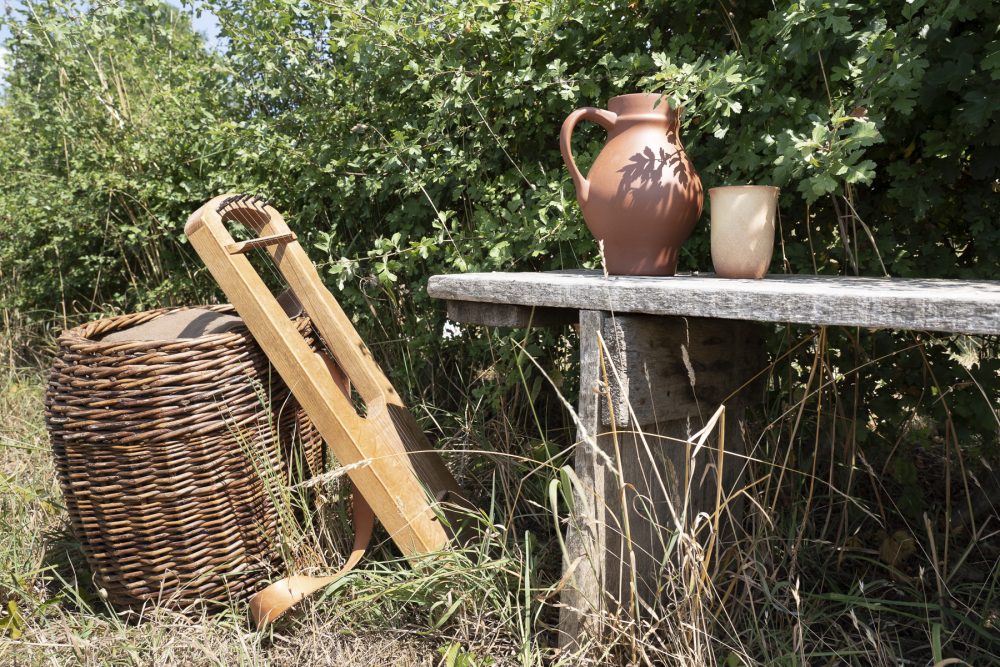