It will shake you—in an informative and interactive way, and never with a raised forefinger: The Klima Arena centre in Sinsheim illustrates in an impressive way, what climate change means for our planet. The centre doesn’t want to sound the tocsin, rather indicate ways out of it. “Our goal is achieved, if every visitor makes a small change at home after his visit to our centre,” says Natalie Wohl from the education team.

The ground starts to vibrate. Accompanied by a slight buzzing, a Hyperbus floats out of the hangar. Its launch is directed to the future, to a journey into the year 2100. Its destination: the Amazon rainforest. Or rather the little bit of it that is still left and that is being preserved with a big effort in hothouses. The Iguazú Falls are sold as being a great tourist destination—after all, the rock formations are “impressive without the water as well.” And the Arctic? Virtually ice-free.

These worst-case scenarios become visible on the screens in the glacier cinema of the Klima Arena centre on climate change in Sinsheim. They show the world what the same may look like, when it keeps heating up—if mankind continues to spew out as much CO2 into the atmosphere as it is happening right now and doesn’t take any action to stop climate change. The virtual-reality flight with a vibrating floor slab and moving images literally shakes the visitors up. “Many visitors leave the glacier cinema with real great concern,” says Natalie, “because they become aware for the first time of what we could be about to lose.”

However, they are not left with these depressing scenarios. On the return journey there is an incident and the Hyperbus must make an emergency landing. The visitors must solve problems and cooperate to recover energy supply, because only if everybody lends a hand, only if everybody makes their contribution, the journey can continue. “This is, what we want to convey,” Natalie explains. “Everybody counts and everybody can indeed do something. Even to prevent these worst-case prospects.” 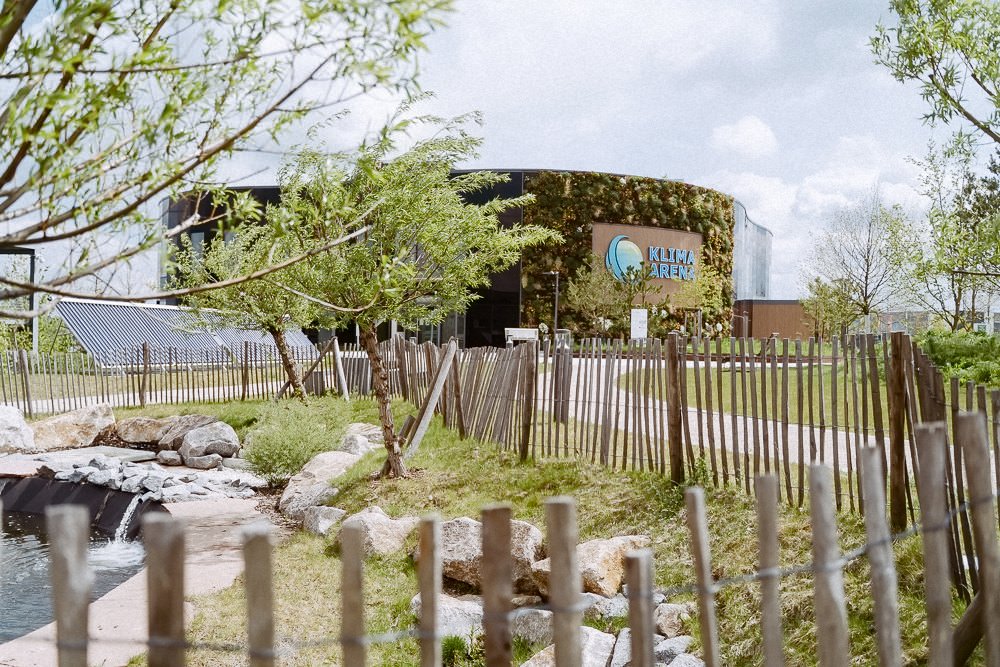 The Klima Arena opened in October 2019 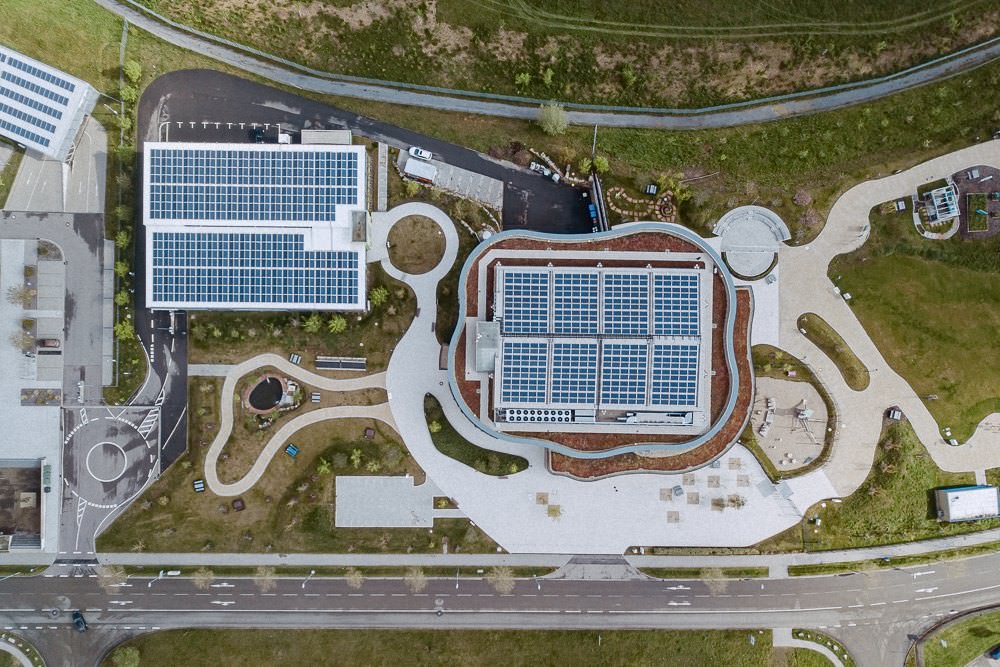 The energy-plus building is awarded with the best level of certification, the “Platin” label. 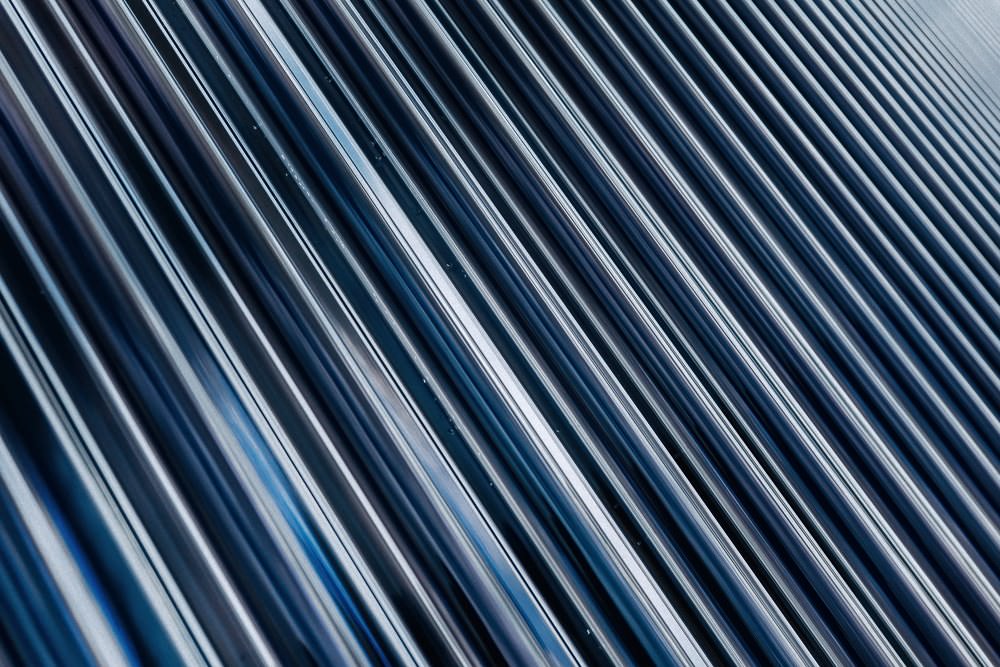 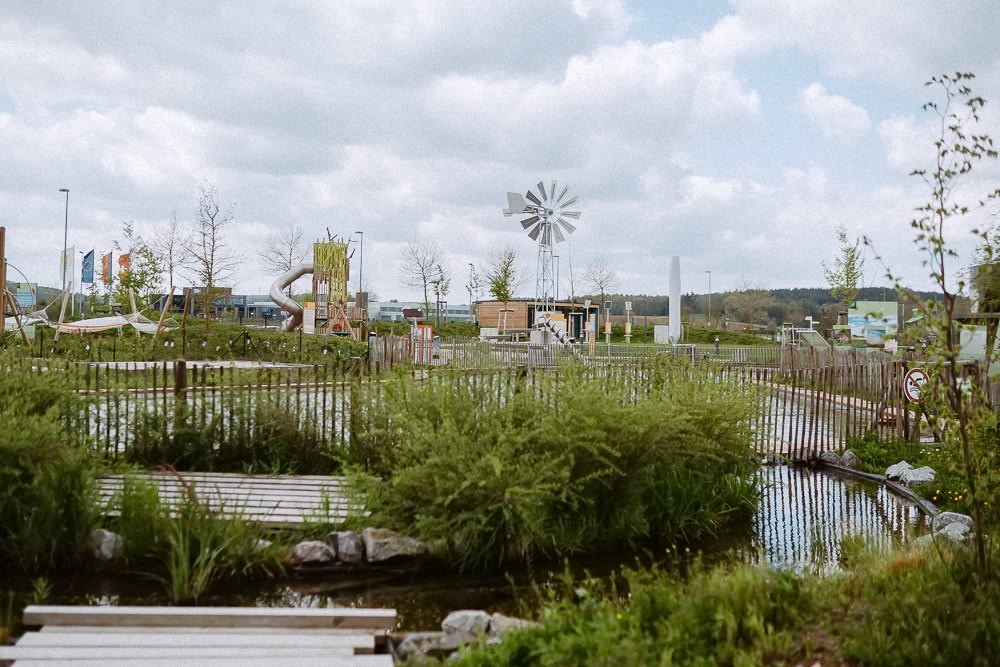 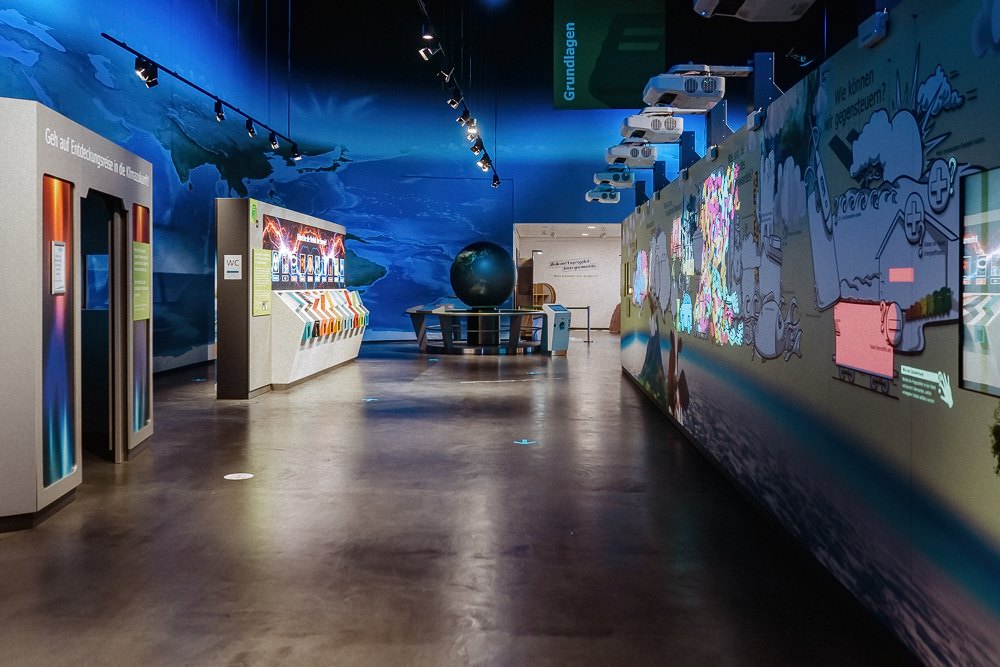 An interactive wall informs the visitors about basic facts of climate change. 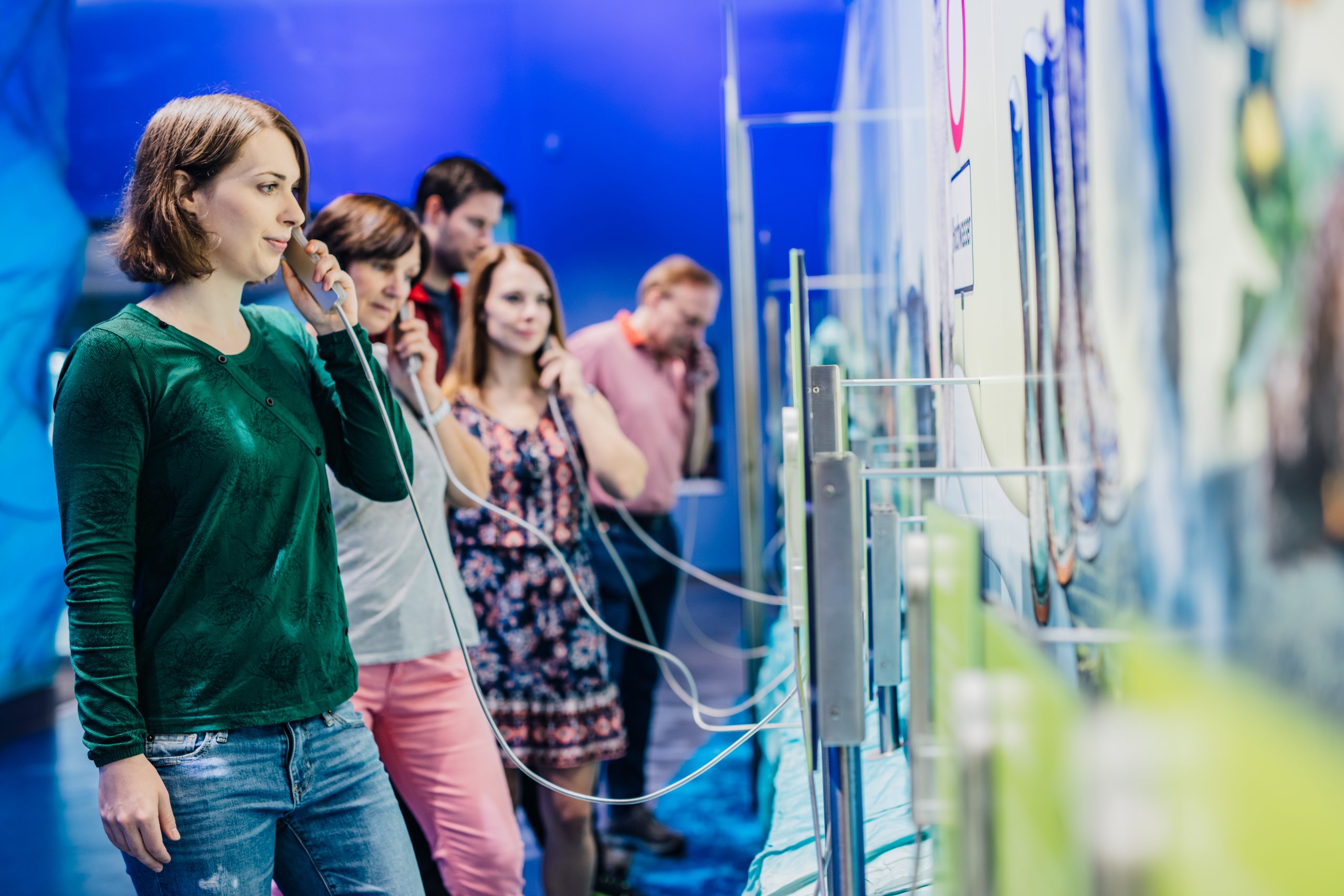 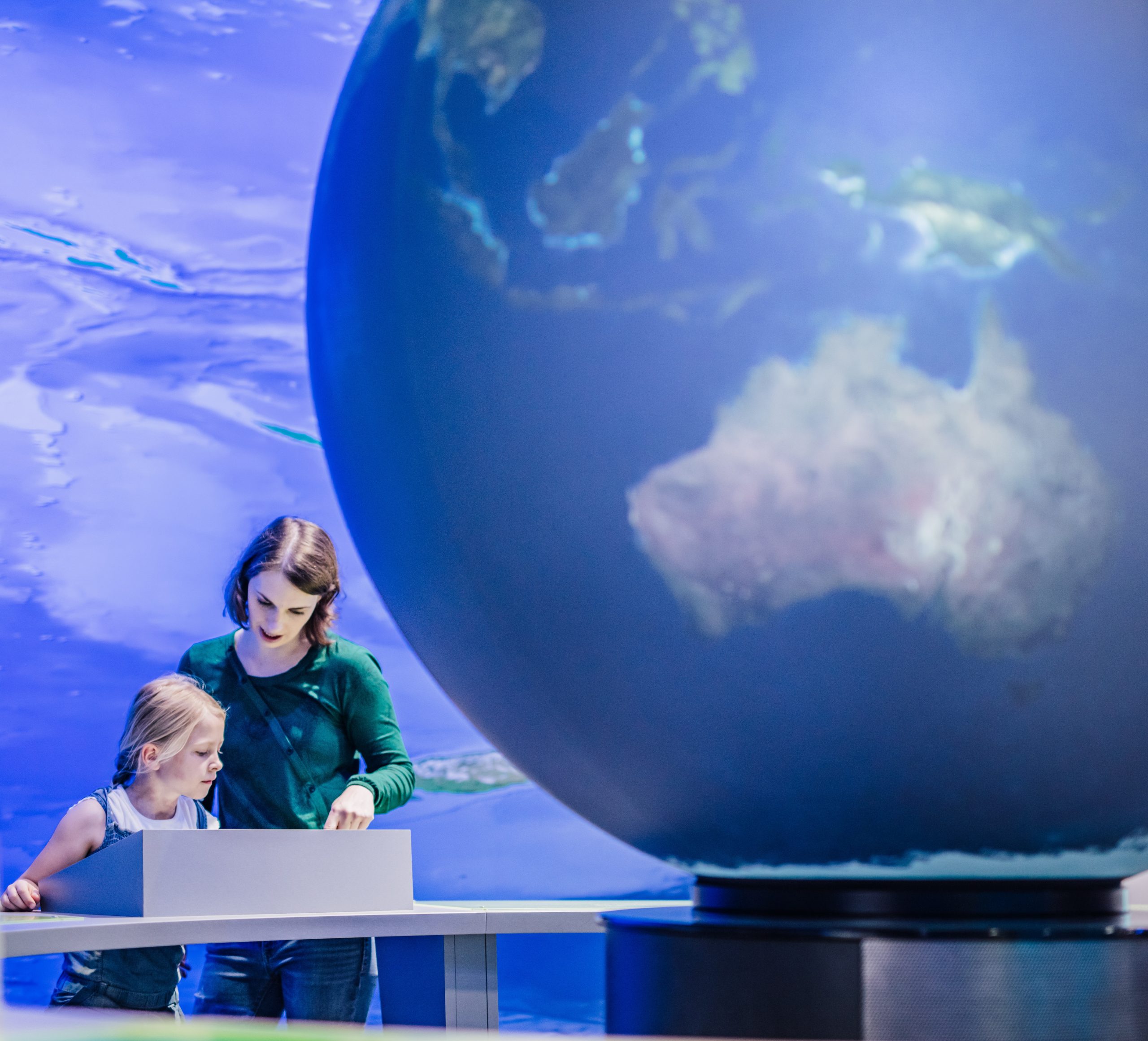 The Globe—an about 1.5 metre-high sphere of the earth. 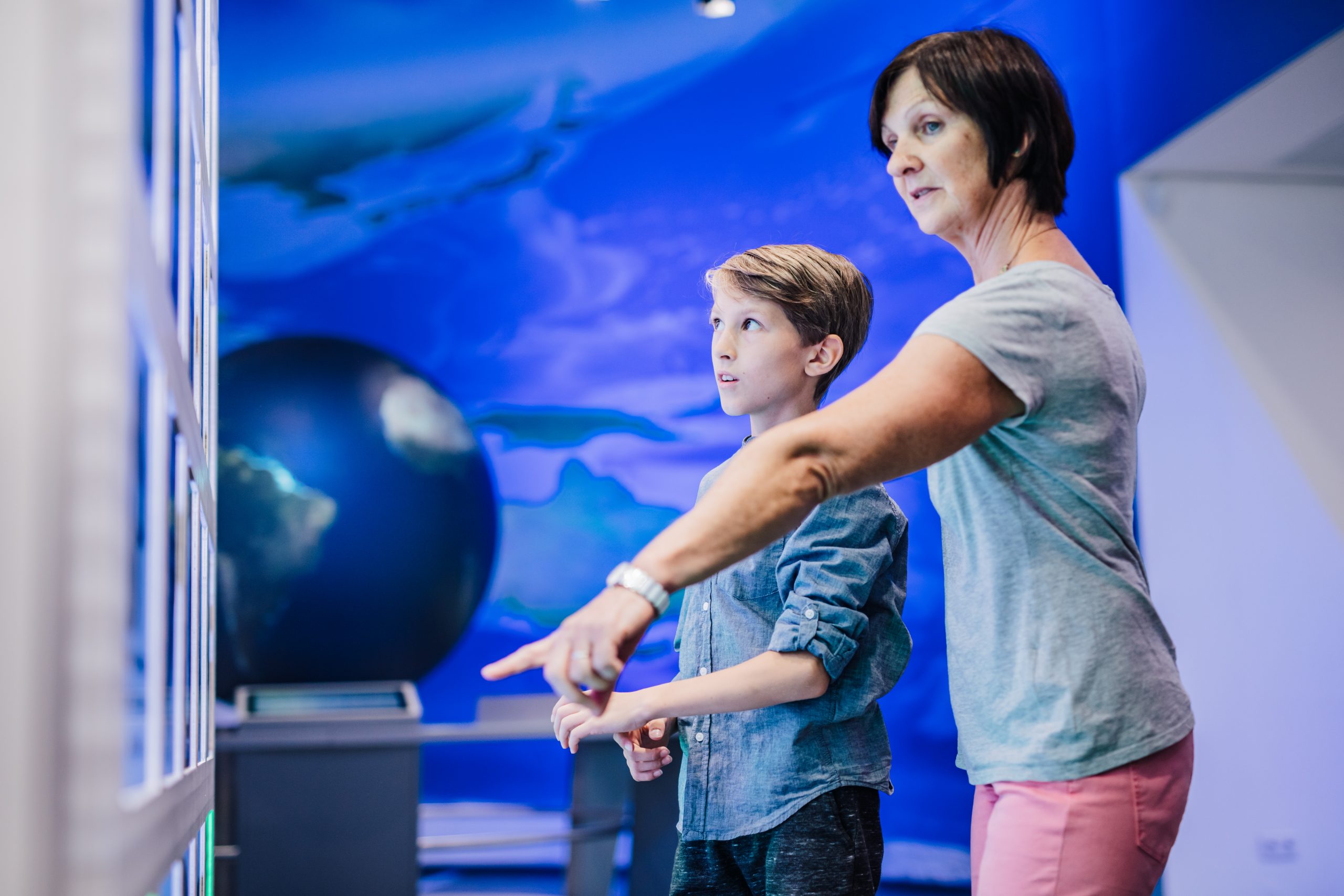 Eureka effects for all ages.

This is exactly what motivated SAP co-founder Dietmar Hopp in 2014 to launch the construction of the Klima Arena. “For more than 20 years we have known that the earth is heating up, the sea level rises and the poles melt. Nobody will remain unaffected by the consequences of climate change,” he said upon the opening of the centre in October 2019. And: “It is high time to act.” He stressed the point that not only politics and the economy matter in this process. “What also matters is the sensitization for the many small aspects in everyday life that, as a whole, make a difference—when everybody joins the efforts.” The Klima Arena is funded by the Dietmar Hopp Stiftung foundation with the involvement of the charitable Klimastiftung für Bürger (climate foundation for the people). Its goal is to promote the understanding of climate change and to inspire people to act.

It is a topic of greatest importance for me, my generation and the generations to come.

In the Klima Arena, this action takes place not by means of exhibitions, but rather through the people, who work there. Such as Natalie. In the education team, she is responsible for school classes. She guides children and adolescents through the exhibition, gives classes in the “green classroom” and workshops, which take place both in the Klima Arena and at schools. Natalie comes from the region. She grew up in Weiler, which is located just behind Steinsberg Castle, which, in turn can be seen from the Klima Arena. Natalie studied Environmental Geosciences, which “was exciting, however, I found that I spent far too much time in laboratories.” She was much more keen on working with people, communicating knowledge and filling others with enthusiasm for science. “This is particularly important when it comes to climate change. Many people still think that climate change is far, far away and the effects are not yet perceptible—but we are actually right in the middle of it! It is, indeed, a topic of greatest importance for me, my generation and the generations to come.” So, Natalie is now studying an MA in Biodiversity and Environmental Education at the University of Education in Karlsruhe. During her studies, she had already started to work as an assistant in the Klima Arena, which was then only in the stage of construction. “I am strongly attached to my roots,” she says. “When I heard about the plan of this project right on my doorstep, I was all excited about becoming part of it.”

She is still very excited by the exhibition and still likes it best to watch the exhibits herself, to click, to do a virtual run as polar bear baby Ella across melting icebergs towards its mother. “When you come here, you definitely have to go to the Glacier and the Globe and go shopping,” she lists the must-dos. Natalie speaks quickly and laughs a lot. She is so much looking forward to finally welcoming school classes again. The gates of the Klima Arena were open for only six months, before the coronavirus closed them. “This was very frustrating, indeed.” They used the time to refine the exhibition and design workshops and shifted parts of their offer into virtual reality. “But this is not the same,” says Natalie. “The pupils are left with a totally different impression, when they come here and I can show them directly with a simulation, how the earth has heated up in the past few decades—how it becomes more and more red.”

She walks over to the Globe—an about 1.5 metre-high sphere of the earth. Here, you can simulate global warming and demonstrate, how the earth has become boiling hot over the past few years. Visitors can call the current weather report to the display in just a few clicks, or a two-day forecast, like they are used to. And: They can equally easily check, where in the world the forests were in flames in the past year or how the smoke spread all across the planet. “It becomes clear, how interconnected we all are,” says Natalie. “When forests in Siberia are on fire, the effect is on us as well.”

The Klima Arena itself is more or less part of the exhibition: It is an energy-plus building, awarded with the best level of certification, the “Platin” label, by the Deutsche Gesellschaft für nachhaltiges Bauen DGNB (German society for sustainability in construction). Apart from having two photovoltaic systems, one ice storage system and two cisterns, the building is fully recyclable, if it will ever have to be torn down. Inside of the building, innumerable installations or devices gleam, move or ask you to click on them or give them a try. Some visitors may well be overtaxed, particularly when they are not very technology-loving. This is why there is always someone available from Nina Wilhelmy’s visitors’ team. “We don’t want to hand them a map and let them go through the exhibition alone, but rather take them by the hand.”

At the beginning of the exhibition, an interactive wall informs the visitors about basic facts of climate change. It explains causes and illustrates consequences. Afterwards, there are various theme areas dedicated to everyday life of the people. These areas are about living and energy, mobility and consumption—and about how all of these can be redesigned to be more environmentally friendly. Spread across the areas, there are a number of stations for infants and children to play. Older children can go rallying through the centre. “We are surprised at the variety of visiting groups,” says Nina. “School classes, hiking groups, members of district councils, entire company departments. Many families, of course, and usually grandparents with their grandchildren—which I really like.”

If, at a point, the range of offered information has made your head spinning, you can shift over to the extensive outdoor terrain. Different habitats are presented here, and also what indigenous plant species are endangered because of climate change and which ones may substitute them. The Klima Arena even has a meadow orchard, right behind the “green classroom” that Natalie uses to teach pupils outdoors. And even the playgrounds are equipped with a gain in knowledge: If you want to do a lap in an e-kart, you have to generate the required power in a hamster wheel in advance. Not doing anything is not an option in the Klima Arena.

Getting to the Klima Arenain a climate-friendly way, by public transport or bike: How to get there 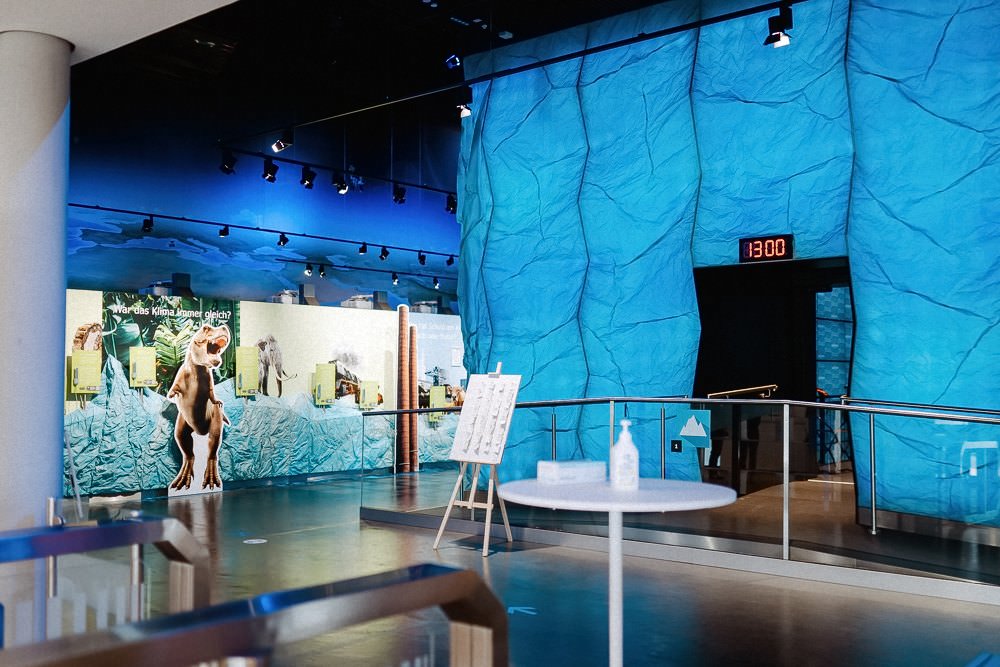 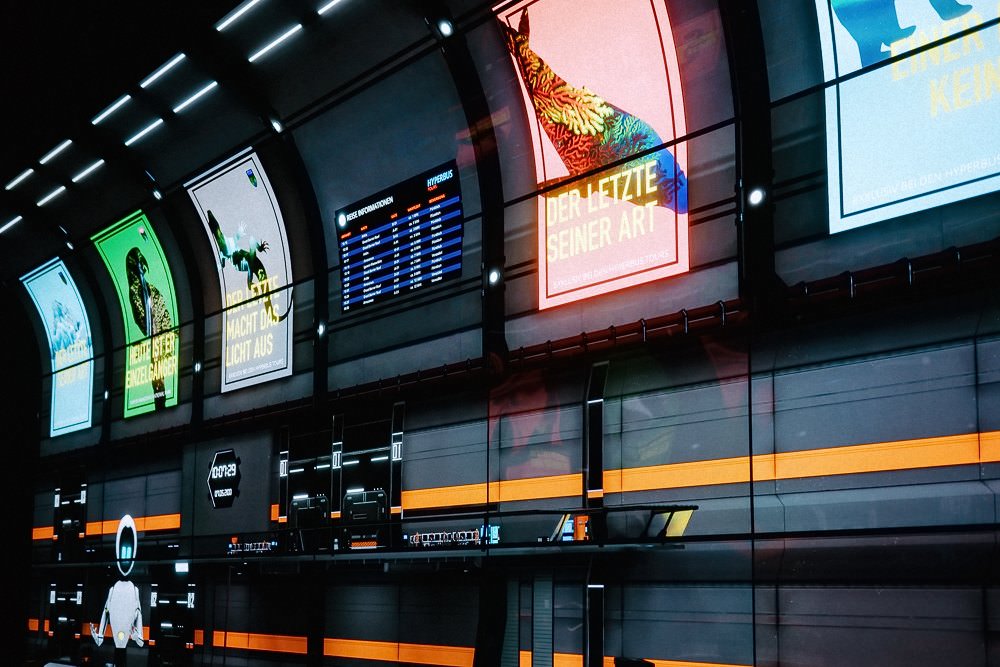 The Scrrens show the world what the same may look like, when it keeps heating up. 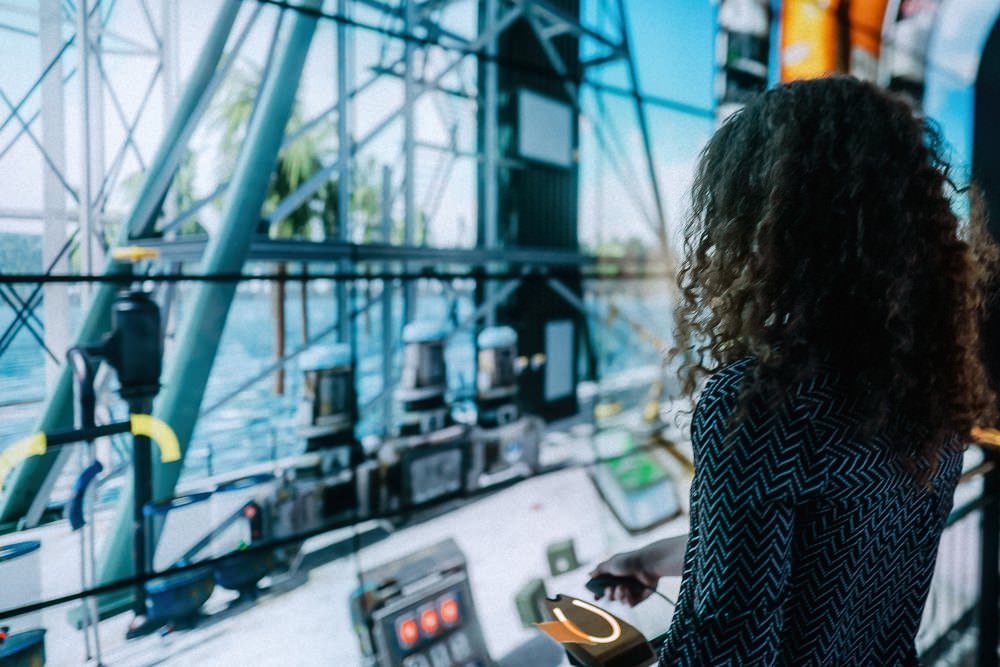 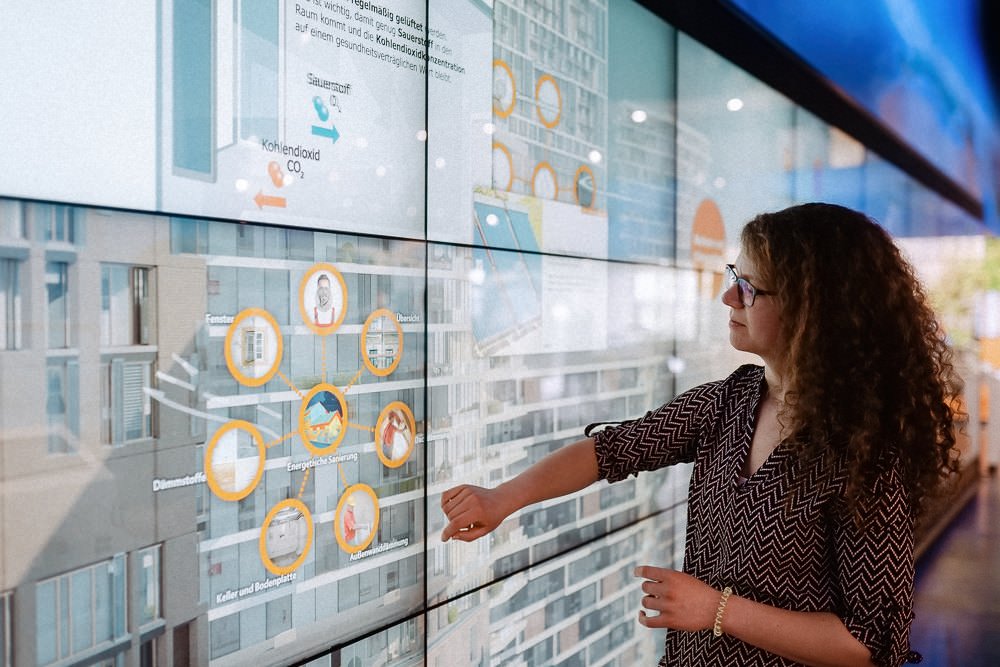 The various theme areas are dedicated to everyday life of the people... 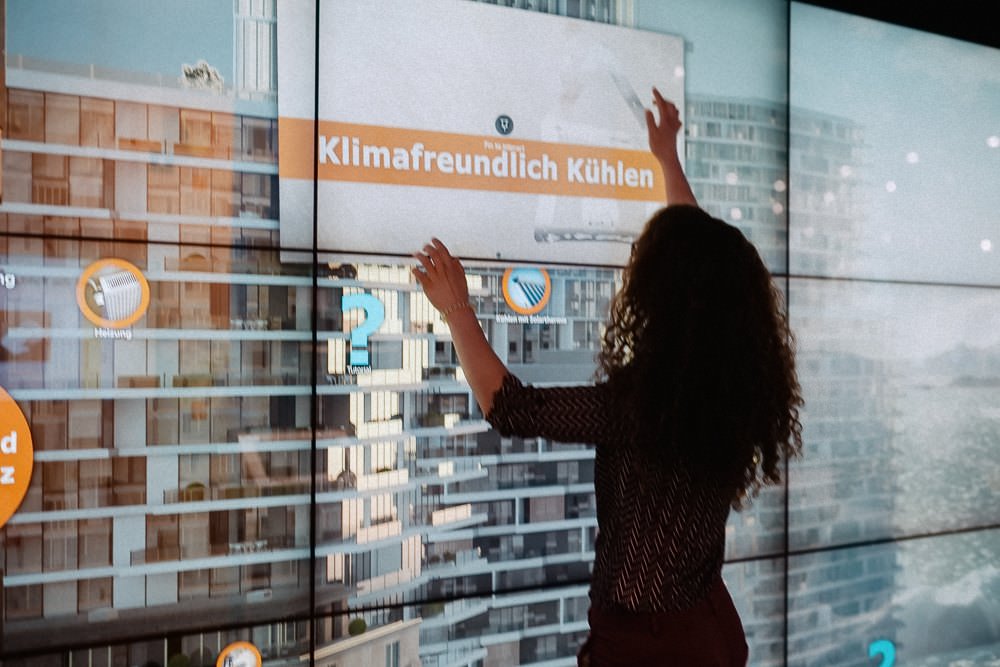 ...and about how all of these can be redesigned to be more environmentally friendly. 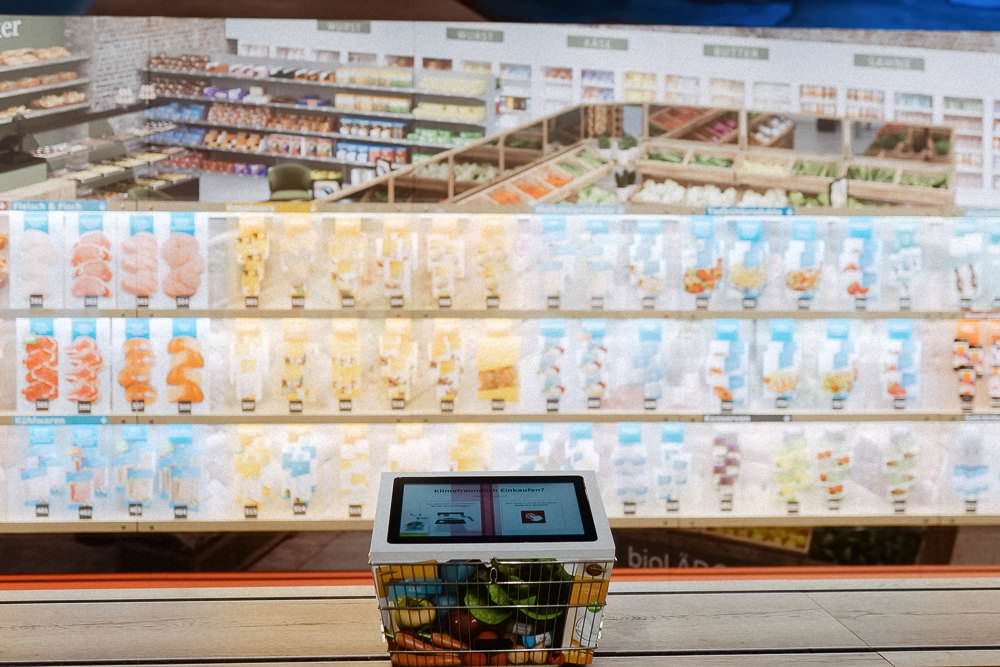 For example in the supermarket. 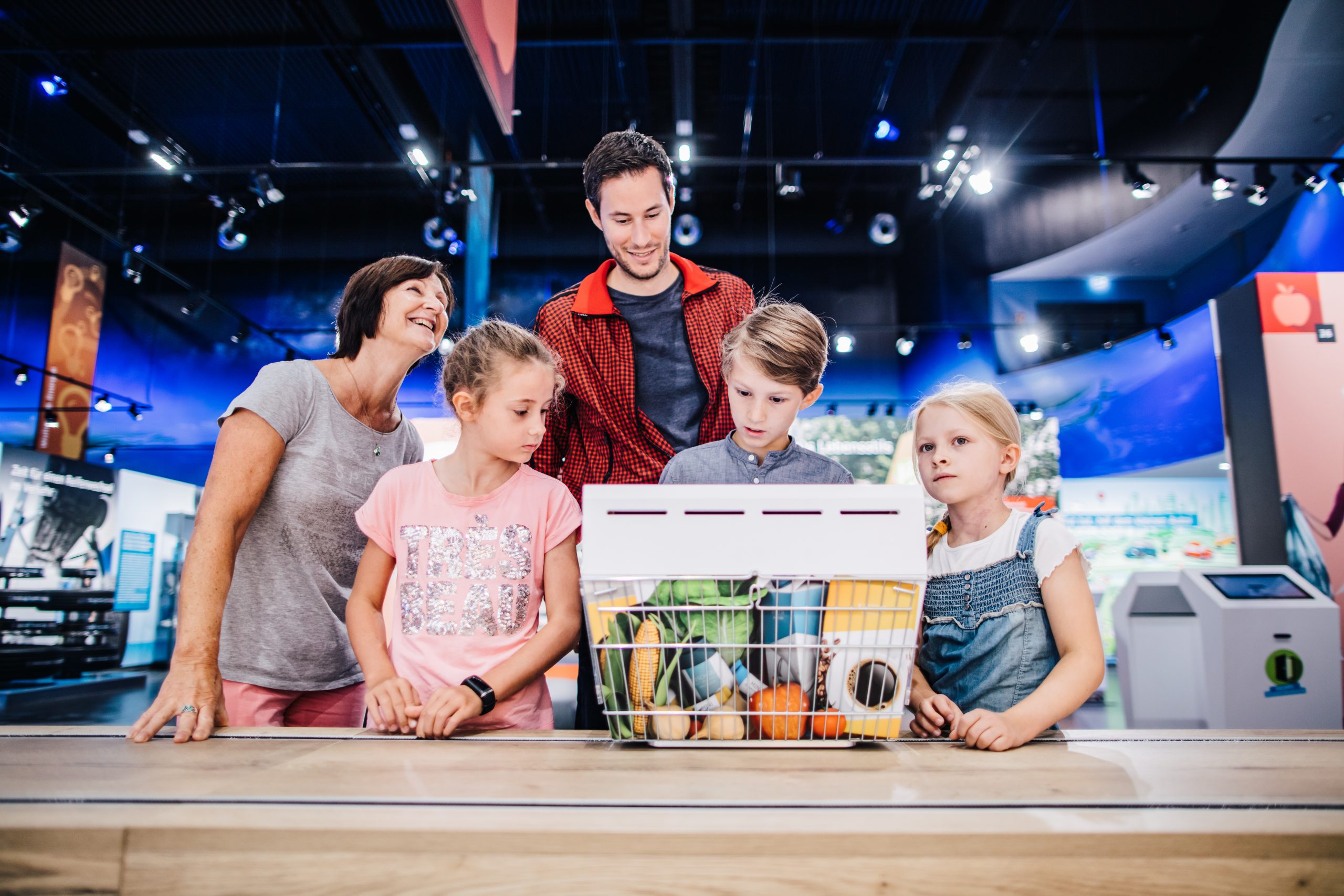 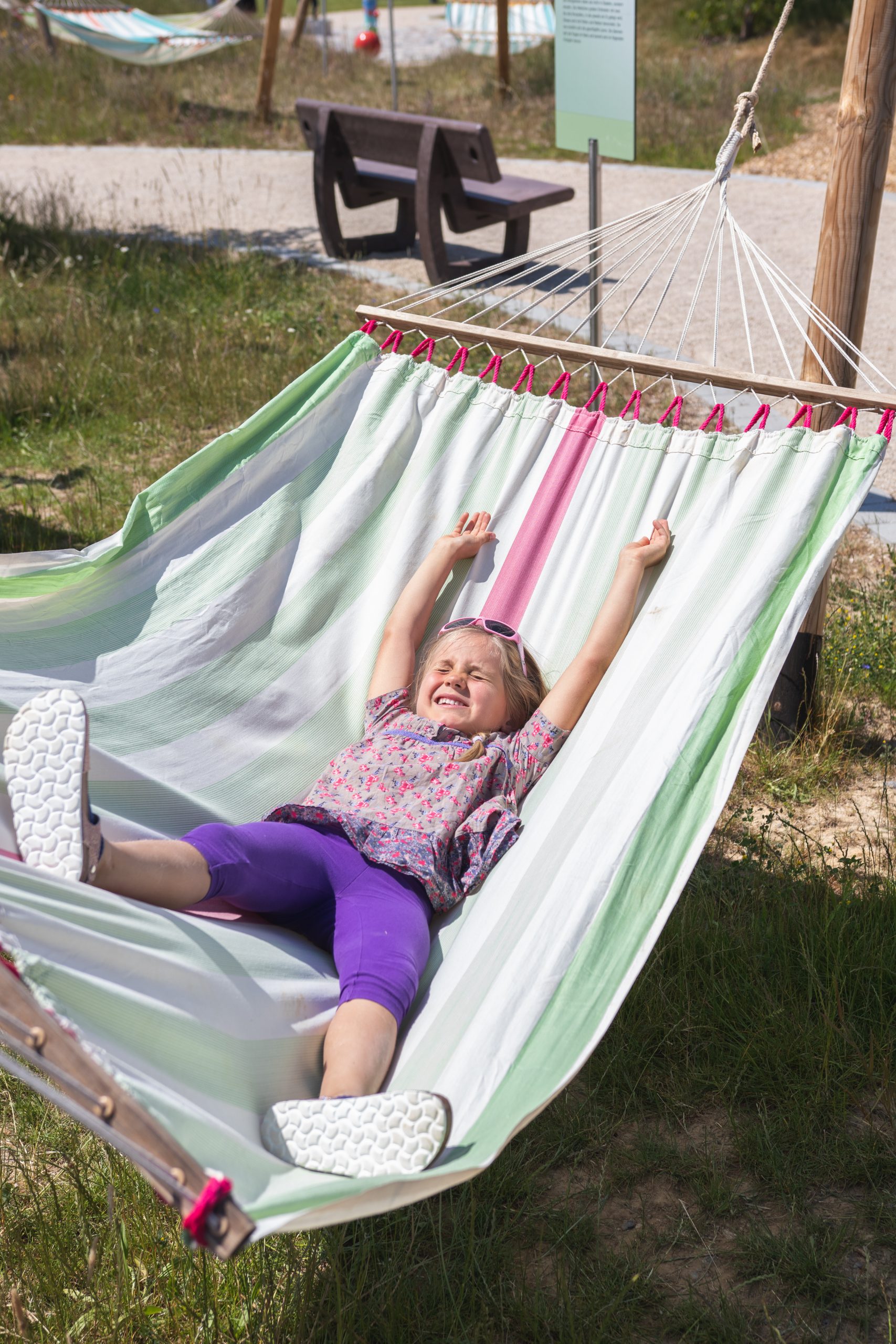