From Neckarelz via Mudau to Hardheim—with a detour throughBavaria. The 73.8-kilometre-long Mundartweg dialect trail in the Odenwald passes through ten municipalities, two districts, two federal states—and through a multitude of dialects. Hans Slama, chairman of the traffic and local history club in Mudau, wants to preserve linguistic diversity in his homeland.

It’s a bit like playing Chinese whispers: the words change insidiously, almost imperceptibly. A new letter, a slightly different pronunciation. Different from village to village, but still understandable. At the end of the journey, however, the difference is significant. The “Wedderhaahn,” as the people of Lohrbach say, has become the “Kerchegöüger” in Höpfingen, both referring to the weathercock. Yet, the two places are only 40 kilometres away from each other.

The Odenwald is rich in dialects—in diverse linguistic areas. And now you can travel through this colourful linguistic landscape since spring 2022: on the Mundartweg dialect trail, which runs 73.8 kilometres across the Odenwald from Neckarelz via Mudau to Hardheim—with a detour to Kirchzell in Lower Franconia and the baroque town of Amorbach. The municipalities may be close to each other, but they have always been quite isolated from each other due to federal state and district borders and have thus preserved certain linguistic peculiarities.

The trail comprises 25 stations. At each station, a text written in the dialect of the respective place awaits the hiker or cyclist. Sometimes it is an anecdote or a story, sometimes a poem or a song. You can read each text on an information board and listen to it on your own smartphone just by scanning the respective QR code. Spoken once in the dialect, once in standard German—for all those who are not so sure what they have just read or heard. 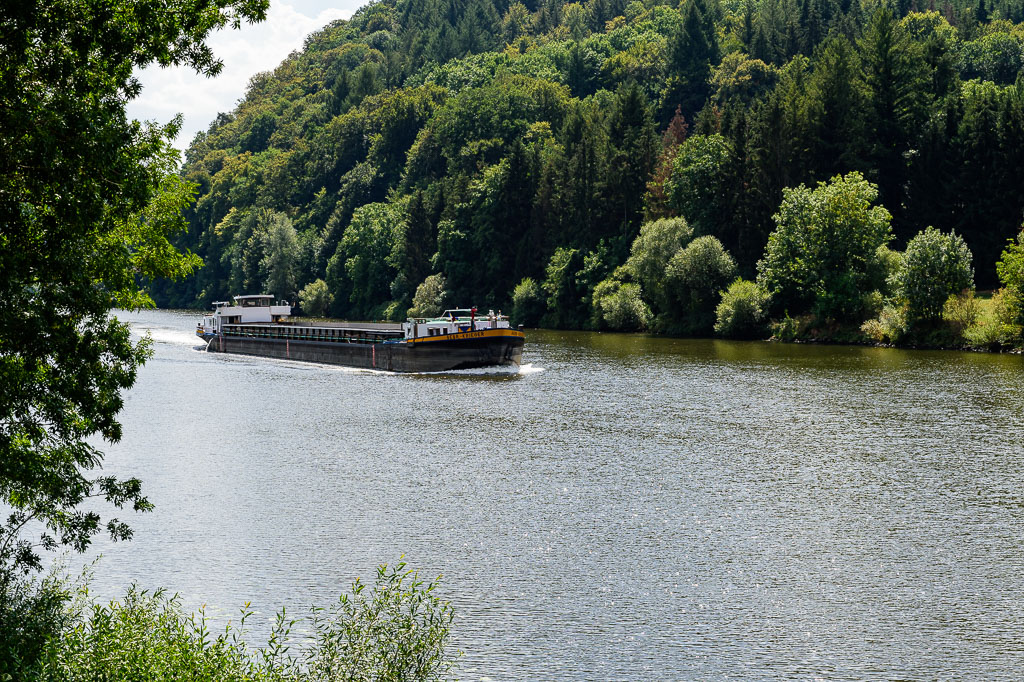 On the Neckar river near Neckarelz: The dialect trail turns off into the Odenwald here. 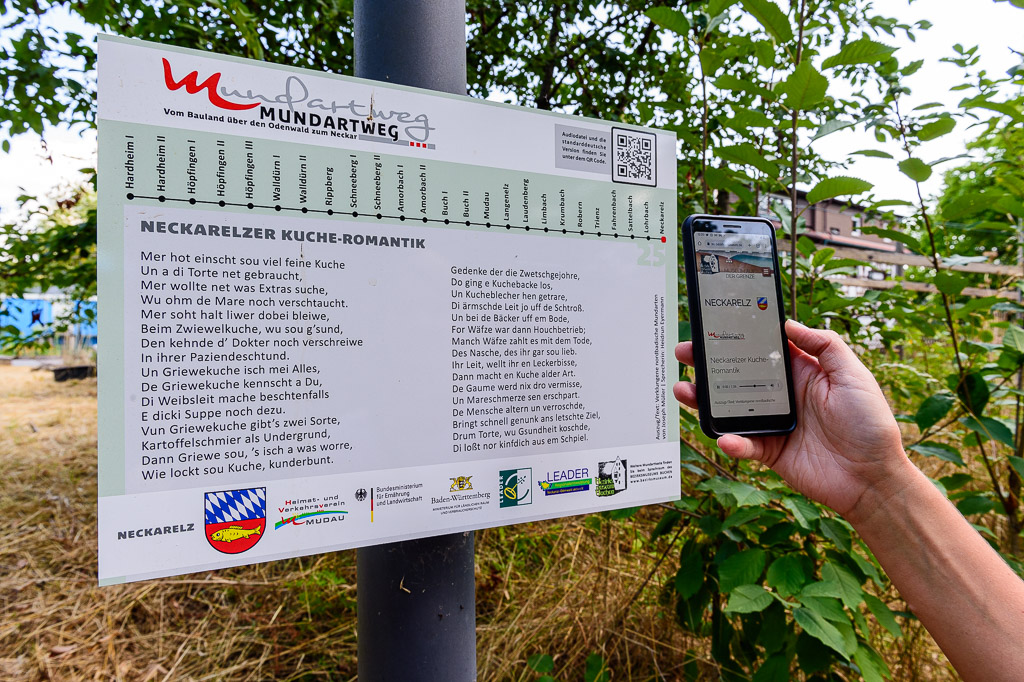 Over the course of the various stations, you experience how the dialects change. 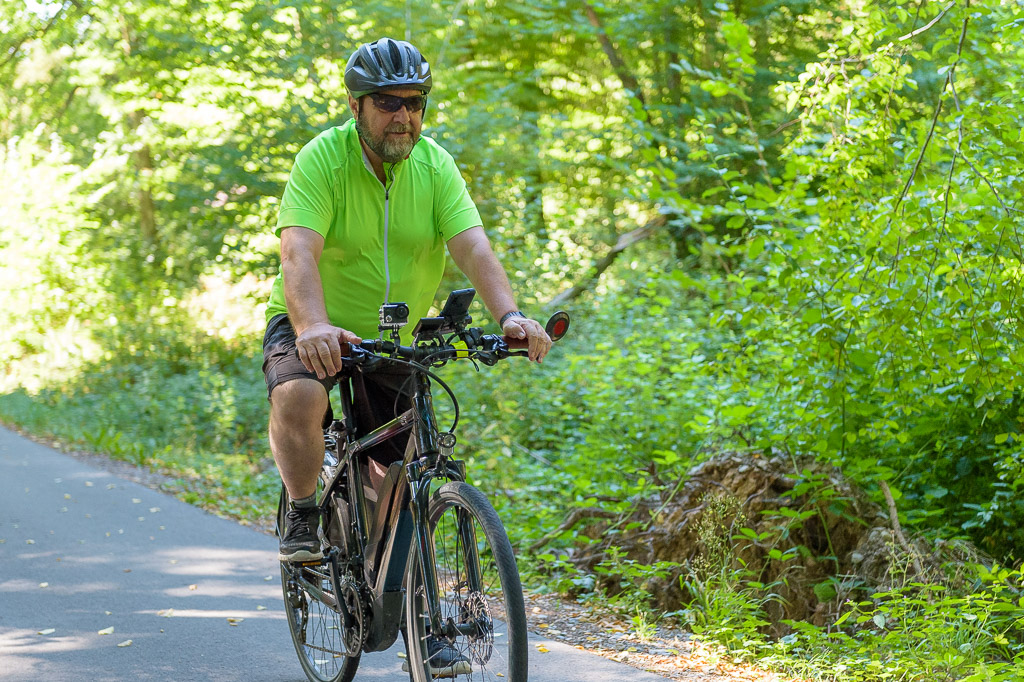 Walter Thier, head of the village of Mudau, enjoys travelling along the dialect trail. 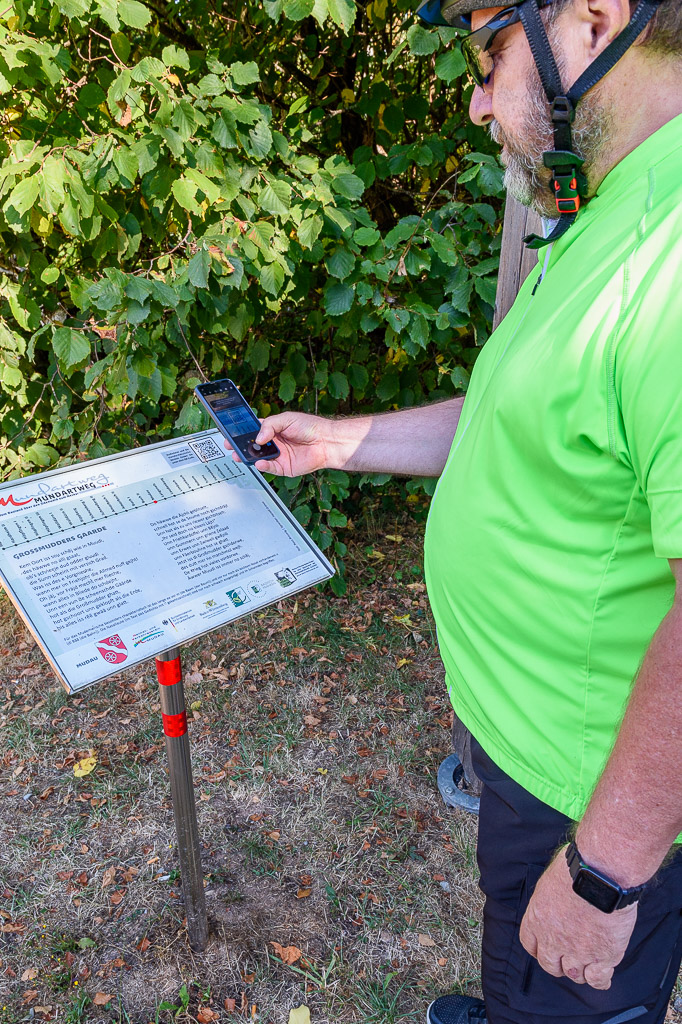 Even he still learns a lot about the dialects of the Odenwald. 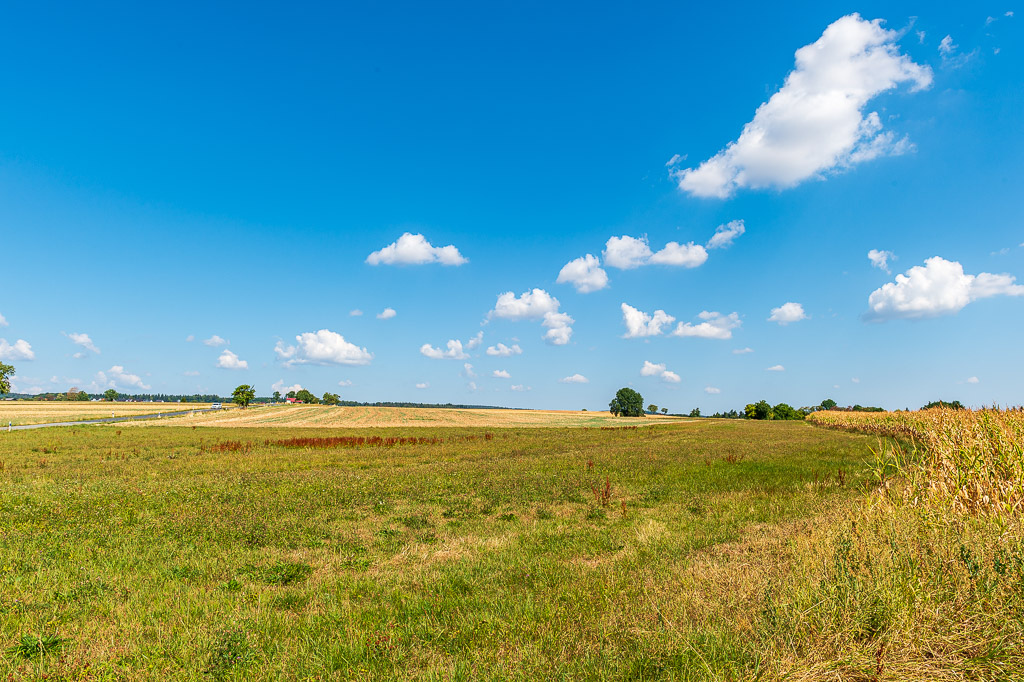 The dialect trail leads through fields… 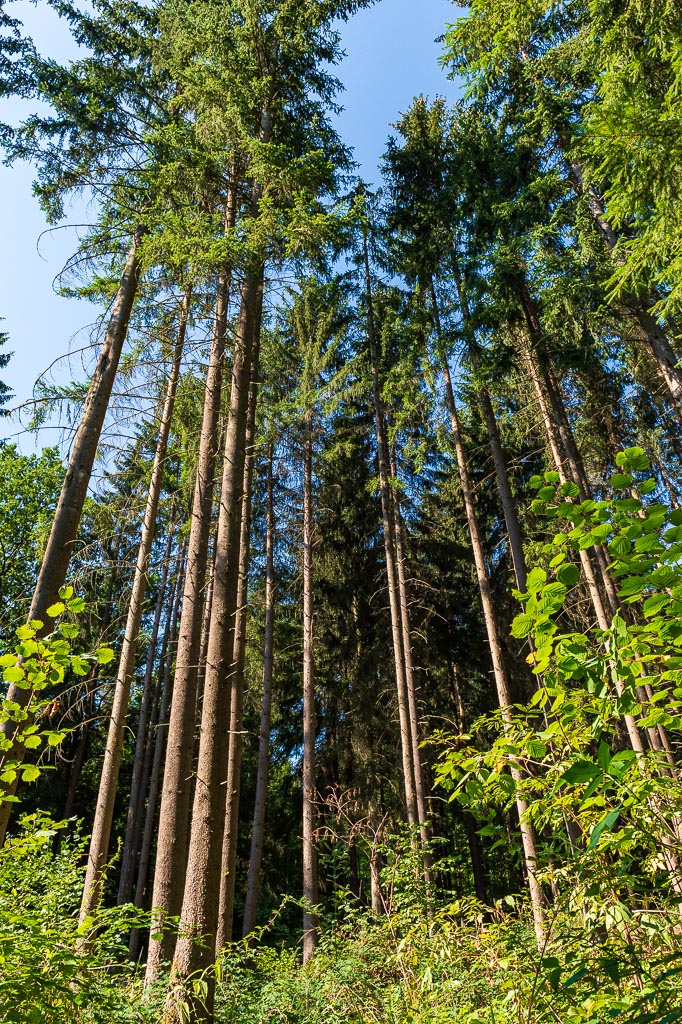 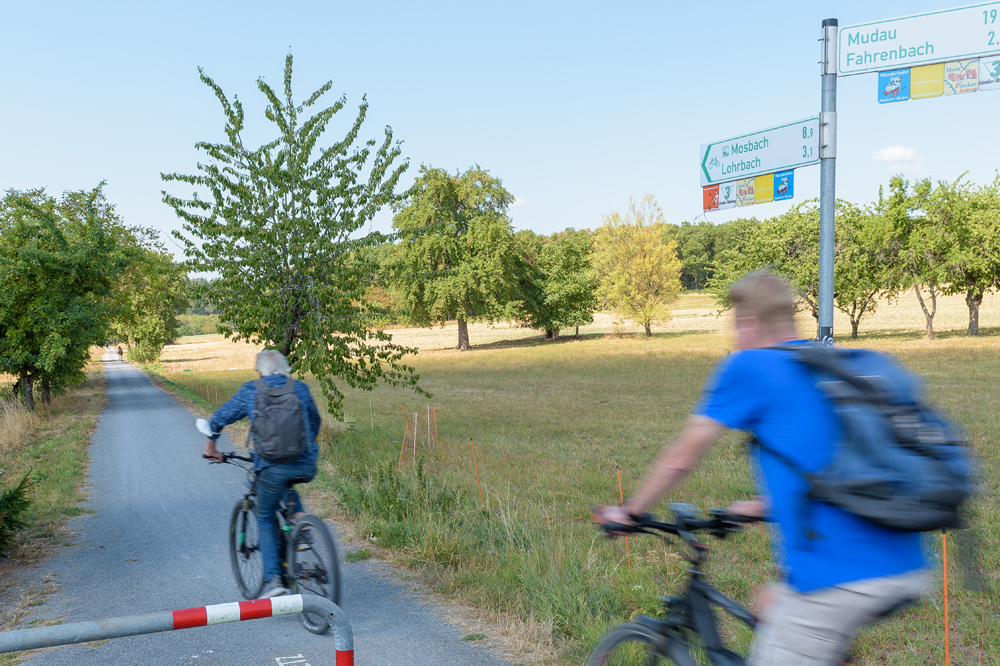 Along the cycle paths… 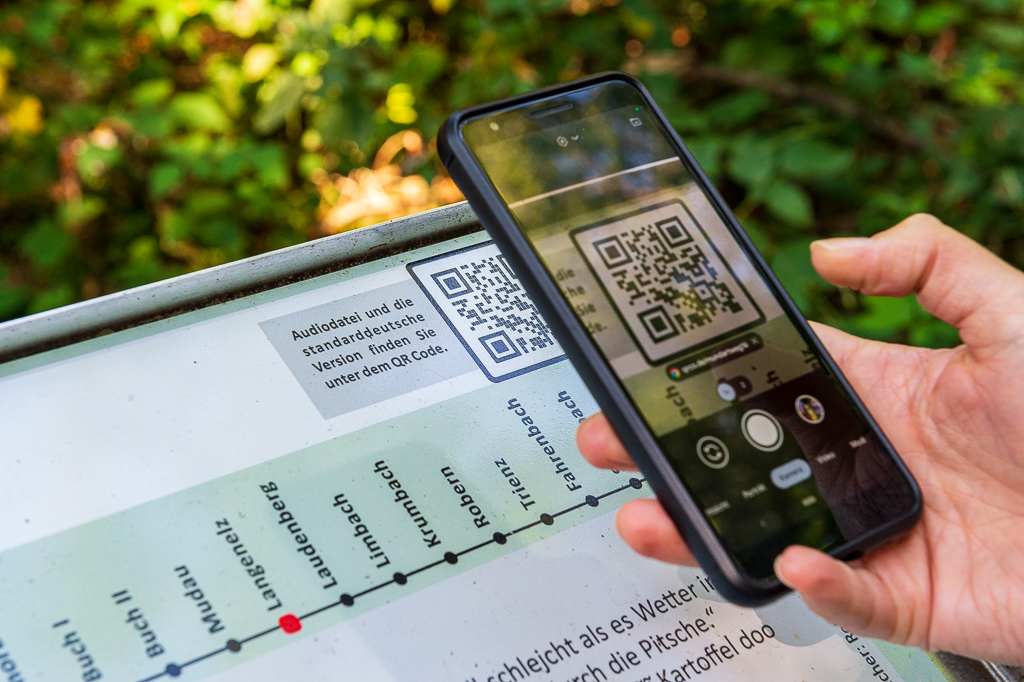 …to the next station.

Hans Slama has always been fascinated by the multitude of dialects of his homeland. He has been chairman of the traffic and local history club in Mudau for 20 years. Some time ago, they started a dialect group of regulars, where everyone “sou babbeln ka, wie er ebbe sou babbele dudd” (can speak as they actually do). And they quickly realised: “This is not so easy anymore! We were missing some words that we had used quite naturally in childhood. Now we sat there and had to really try and think until they came back to us.” This frightened Hans and he decided to do something about it. He wanted to preserve the dialect, at least in its present form. “Who knows, in a few years we won’t even remember the words otherwise!”

He turned to the district museum in Buchen. The museum has a language room where samples of the local dialect are collected. Dr. Isabell Arnstein from the Ludwig Uhland Institute at the University of Tübingen is in charge of the project and was immediately enthusiastic when Hans told her about his idea of a dialect trail. “The north of Baden-Württemberg and Bavaria’s Lower Franconia are extremely exciting from a linguistic point of view,” she says. “There has hardly been any research on this so far.” There are no universities nearby and hardly anyone lobbying for it—she can only speculate about the reasons. “We are in the border region between Baden, Bavaria and Hesse—living on the margins means living a bit more in isolation.”

This is probably another reason why Odenwald residents define themselves much more through the dialects of the very places here than elsewhere. “Here you associate first as a Kirchzeller or Mudemer, and only then as a Franconian possibly. It’s only in third place that you might identify as a resident of Bavaria or Baden-Württemberg,” Isabell explains. And every town is really proud of its dialect and cultivates its peculiarities, even in distinction to the neighbouring town.

This kind of attachment to the hometown becomes evident on the dialect trail. Hans stands in the blinding sunshine in front of the information board in Mudau. Just behind it, the ‘Smart Path’ leads up the mountain. Hans reads out a poem about “Großmudders Gaarde.” It begins with the line “Kem Oort iss sou schẽj wie in Muudi” meaning “No place is as beautiful as Mudau.” Further north-east, in Höpfingen, the “Hååmet mit de viele Råå(n) un Büggl” (the “homeland with the many slopes and humps”) is sung about. “Listening to the lyrics you always learn something about the place or the people who lived there,” says Hans.

It was no hard work to find suitable anecdotes and stories: “It was rather as if people had only been waiting for something like the dialect trail,” says Hans. He enjoyed collecting the texts. “Speaking dialect reaches the people straight away and they are very happy to be part of the project. Thus, the trail is also an expression of appreciation, which unfortunately doesn’t always exist for dialect speakers.”

The actual hard work was transcribing the dialect stories and translating them into standard German, though. “It is difficult to render everything phonetically correctly,” explains Isabell. “It was an enormous amount of work for the many volunteers involved.” But she also learned a lot in the process and used it for her own research. “It’s great fun to see how the dialect changes over the course of the dialect trail. In the north, for example in Hardheim, you can still hear a lot of ‘o’ and ‘u.’ In the south, the vowels become lighter, with more ‘a’ and ‘i.’ The language becomes softer and more melodic.” Isabell is happy to be able to capture the local dialects as they are spoken today through the trail project. However, she doesn’t think they will disappear. “They are changing, just as language is always changing, but dialects will never die out completely.”

The trail leads past meadow orchards and maize fields and through forests and fields and runs along a part of the Main-Neckar cycle track and the Kurpfalzachse route, all of which are well-maintained, well-signposted cycle paths. The “Wanderbahn” is another attraction to be discovered here: the route of the former narrow-gauge railway from Mosbach to Mudau. The dialect trail’s information board in Langenelz is located in the middle of the forest, on a clear spot where a wooden lounger invites you to rest. A brook babbles along next to it. In the past, the steam locomotives used to take a breather here and refuel with water from the brook before continuing up the mountain to Mudau.

The trail required a lot of work. However, Hans would like to continue expanding the project right away. “The Main cycle path crosses in the north, in Miltenberg, and the Neckar Valley cycle path in Neckarelz—a great opportunity to expand.” He has a whole network of dialect routes in mind, a varied and colourful landscape of dialects—connected rather than separated. 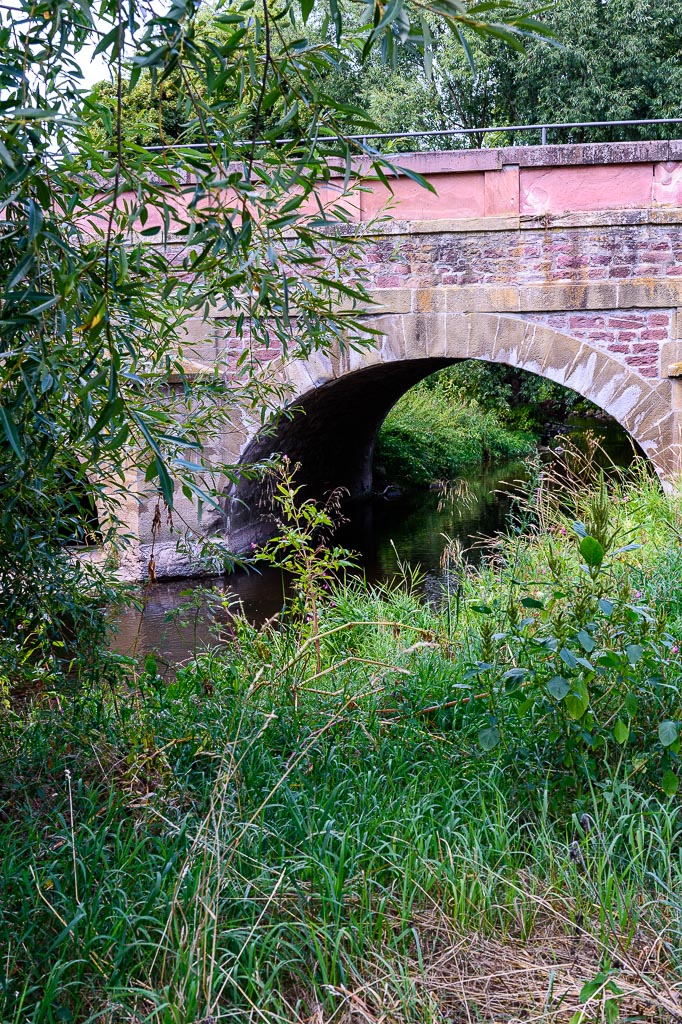 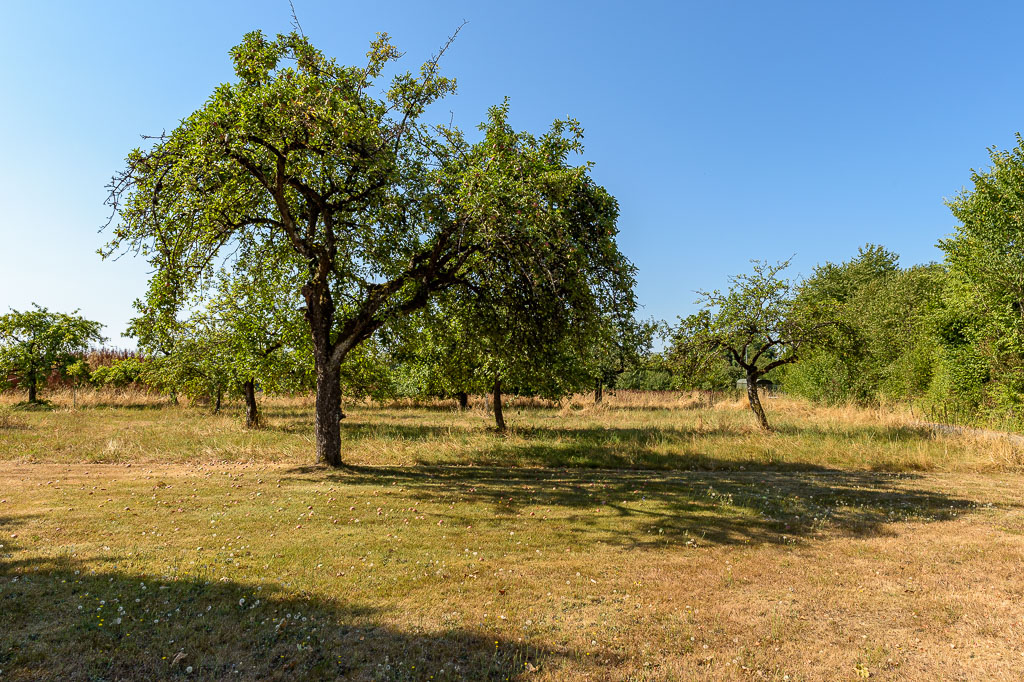 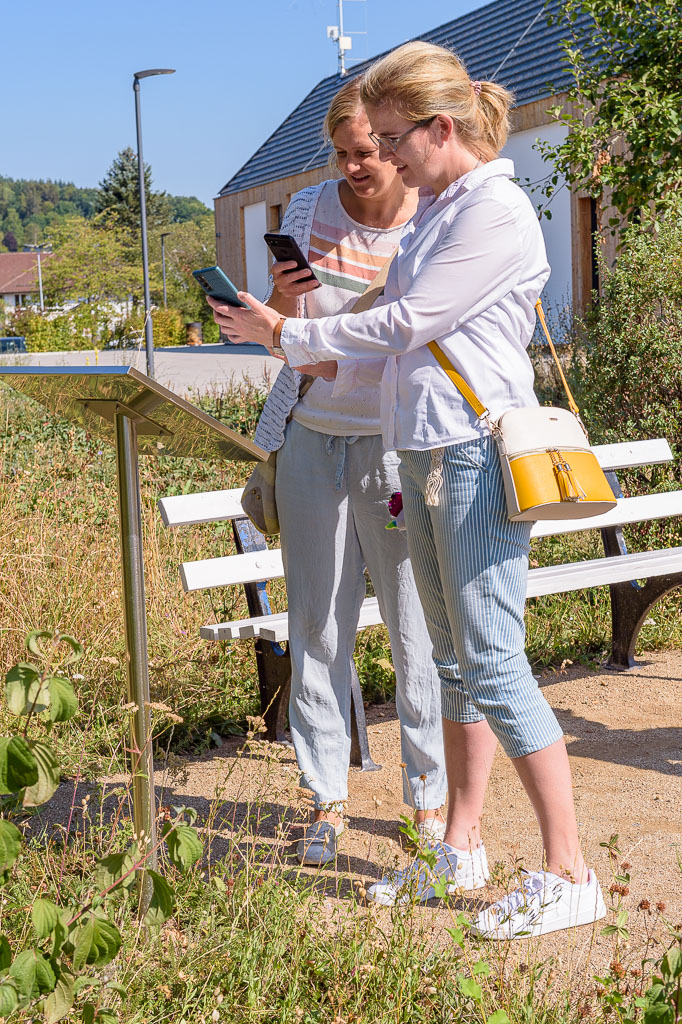 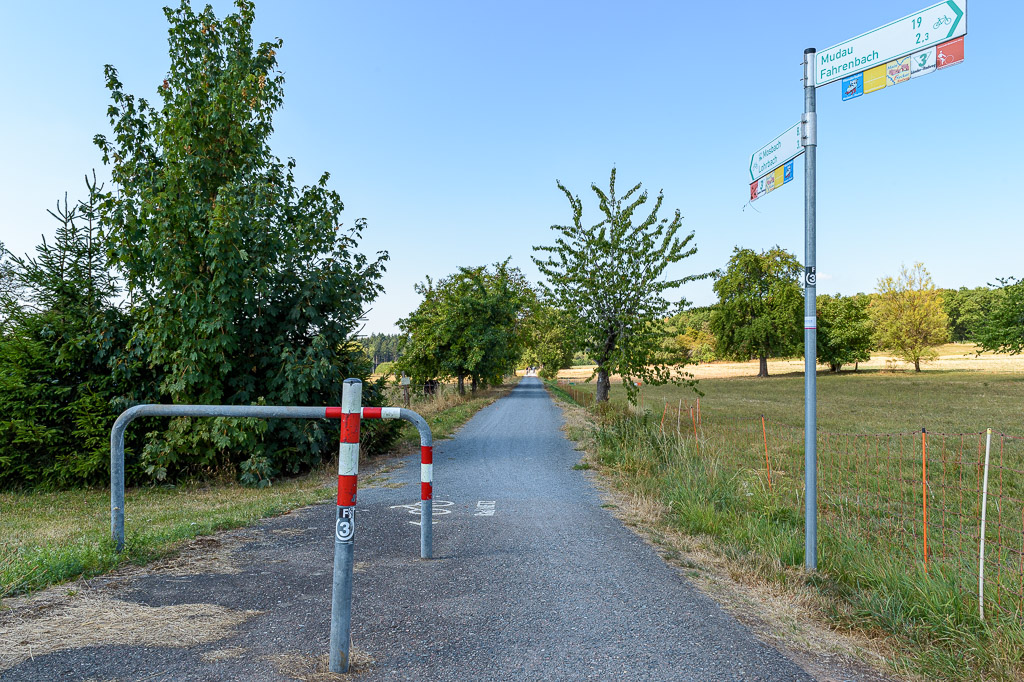 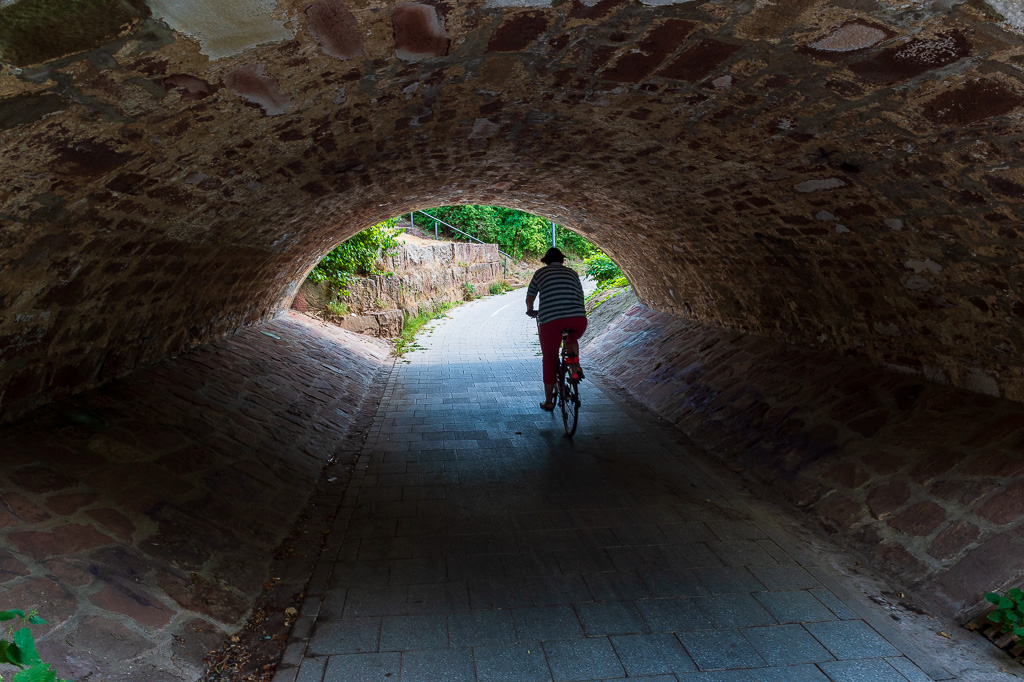 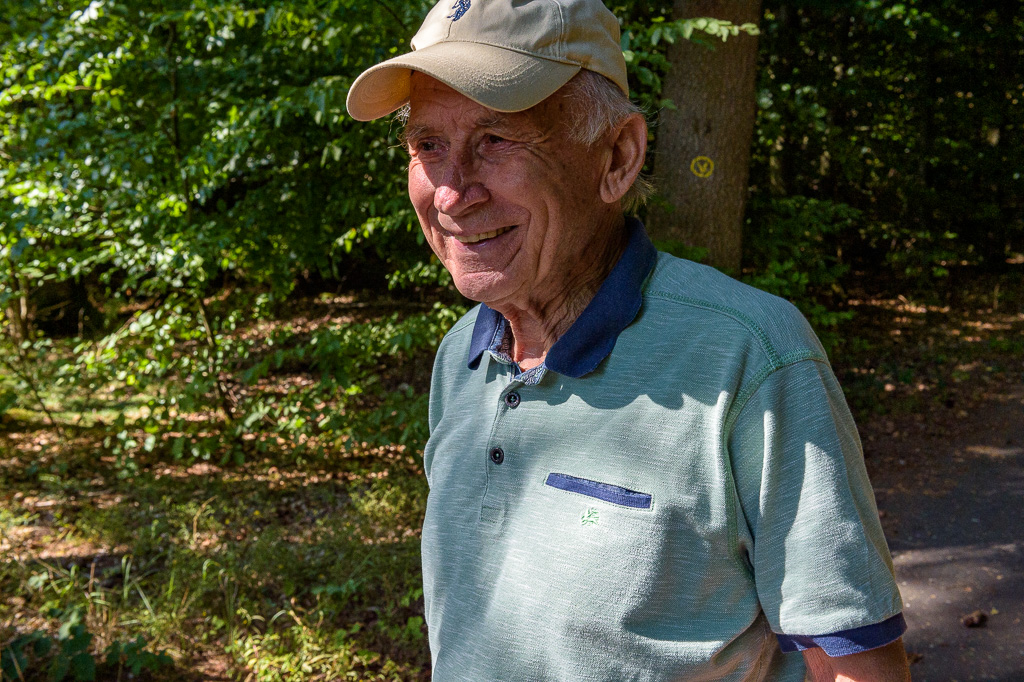 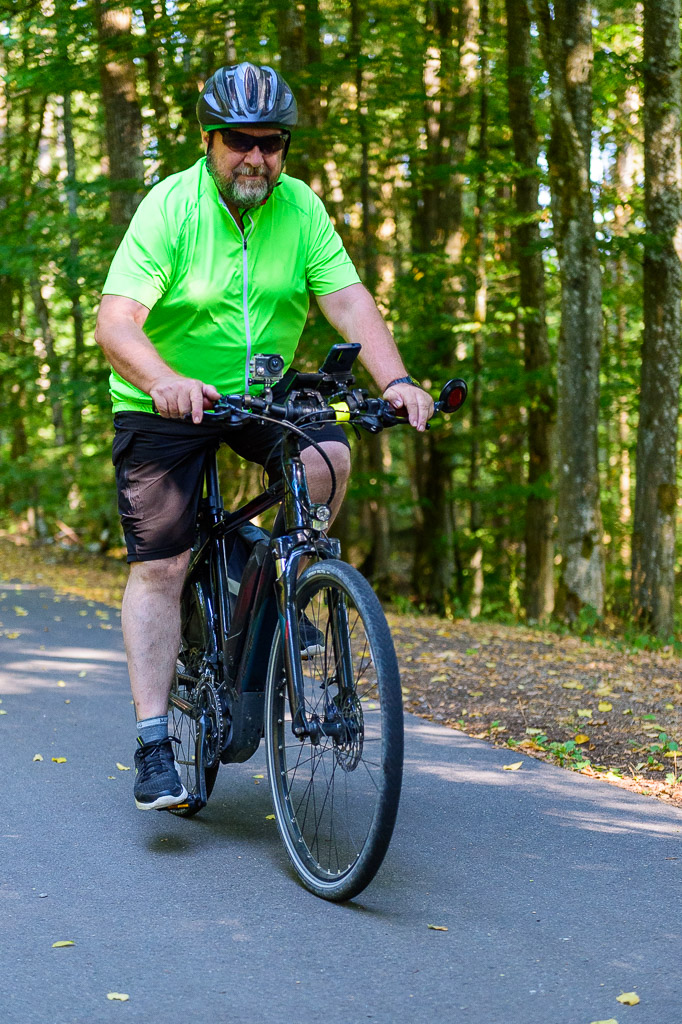 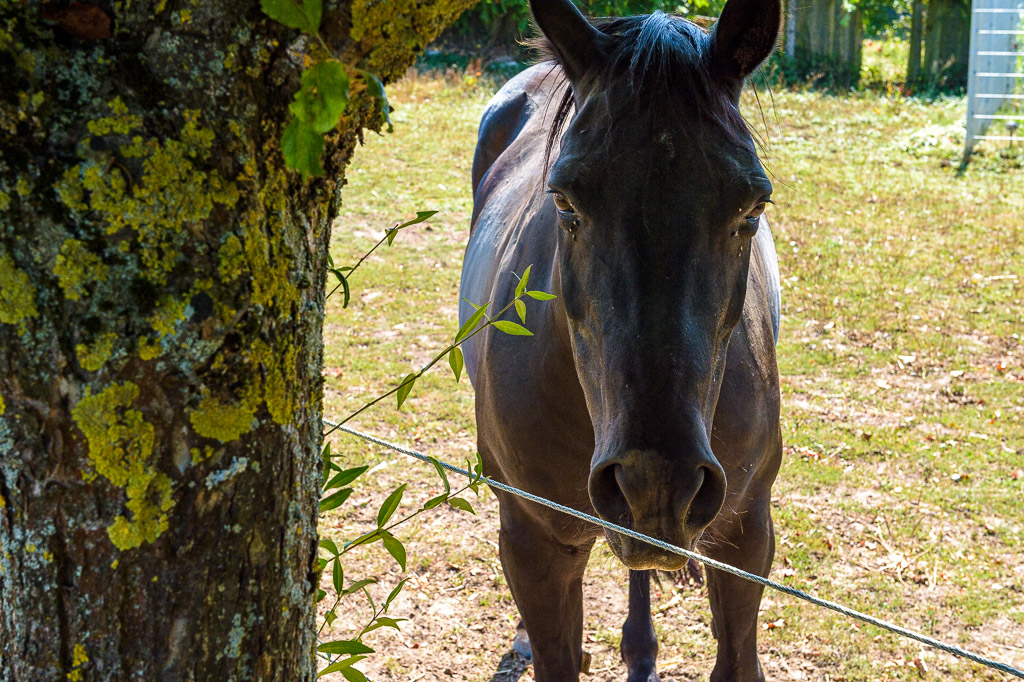