Contemporary dance in a church that is listed for preservation—what may sound like a contradiction has turned out to be a stroke of luck for an entire section of town: With EinTanzHaus, director Daria Holme and her team have turned the Trinitatiskirche church in Mannheim back into a place where people are able to congregate together again.

It has always been possible to dance in the Trinitatiskirche church in Mannheim. But for a long time the notion of dance used to be conveyed by colours only. The sun makes the notions shine and so they shimmer across the floor and the benches, on wood and on concrete. The colourful thick glass elements manage to change the atmosphere—according to the time of day and the season, a cloudy as much as a sunny day. At 11 a.m., the vast and open interior of the church is aglow. At 4 p.m., the afternoon sun lights the concrete up with power and colour.

Daria Holme well remembers the first time she entered the Trinitatiskirche church, back in 2015. She knew the building, of course—she grew up in Mannheim. “However, I never really noticed it. It seemed sealed, almost hermetically.” She was really impressed when she saw which power these small glass faces in the interior actually possess. “We were standing there and suddenly everything matched up: our idea, the unique atmosphere here, light, dance.” In fact, at that time, it was not at all clear, whether their idea would catch on, paving the way for Mannheim’s Trinitatiskirche as a house for contemporary dance.

The G 4 square in Mannheim’s city centre, where the former Trinitatiskirche church had been, was a pile of rubble after World War Two. Was there a need for reconstruction or for a new building? The parishioners entered into a long discussion with the result that Helmut Striffler was commissioned to design a new church that should be a modern building—a new beginning. For the young architect, this was a chance to continue in Mannheim what he had started in Pforzheim as a site manager for Egon Eiermann’s Matthäuskirche church. A construction with exposed concrete and glass, based on Gothic-style cathedrals with an elongated hexagon for a ground-plan and a free interior without any columns. 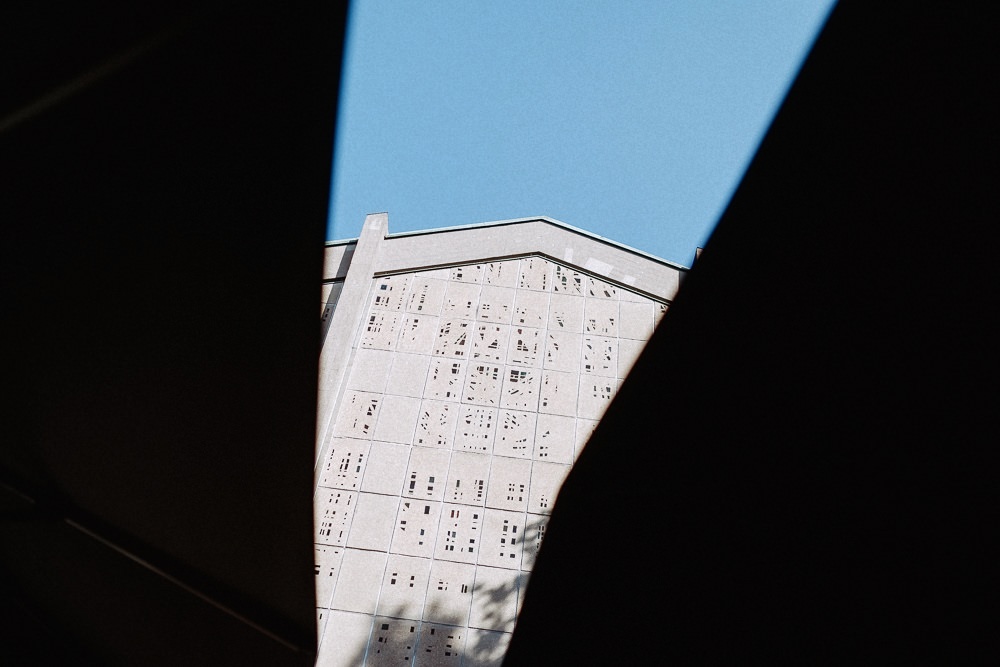 At first sight, the Trinitatiskirche looks somewhat sealed from the outside. 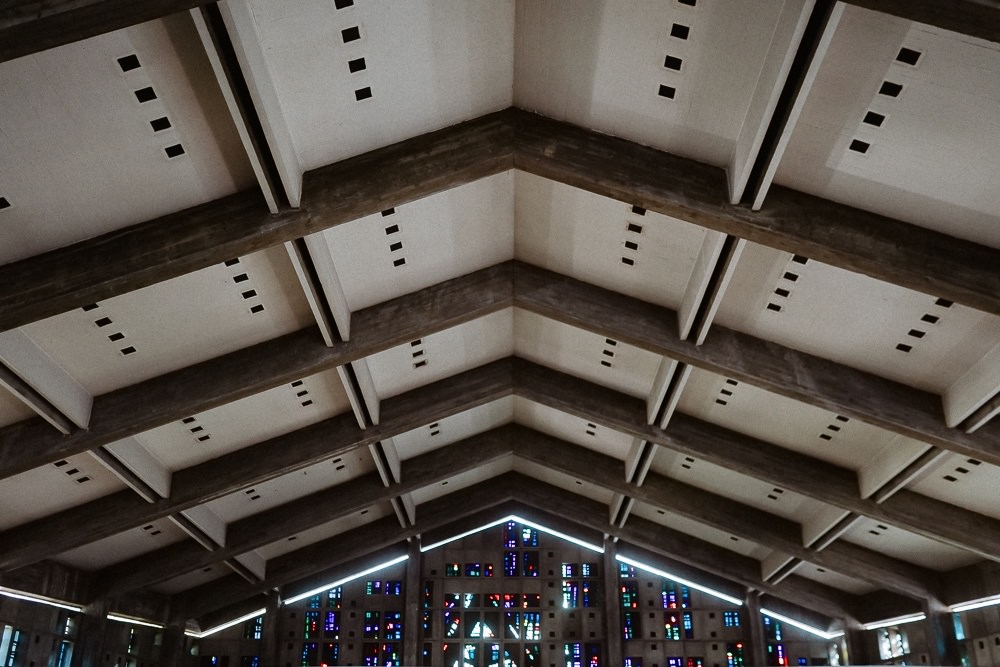 But it leaves lots of free space to breathe—and dance. Thanks to its column-free interior. 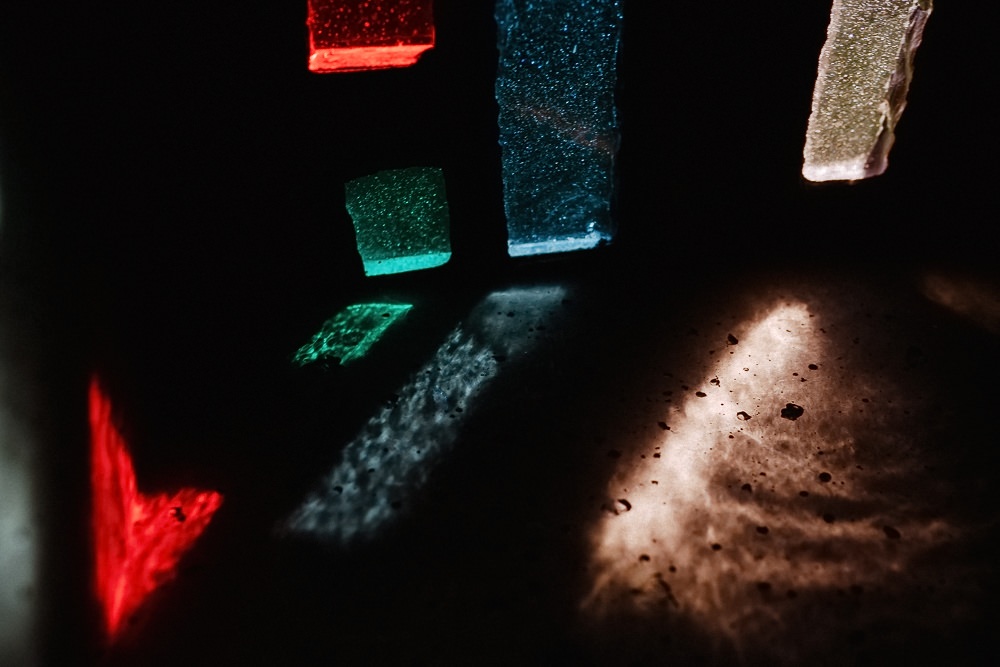 Dancers regularly include the building in their performances. This is also the case with the Junior Dance Company.

The EinTanzParcour was an event, in which the La_Trottier Dance Collective discovered new perspectives through and inside the church. 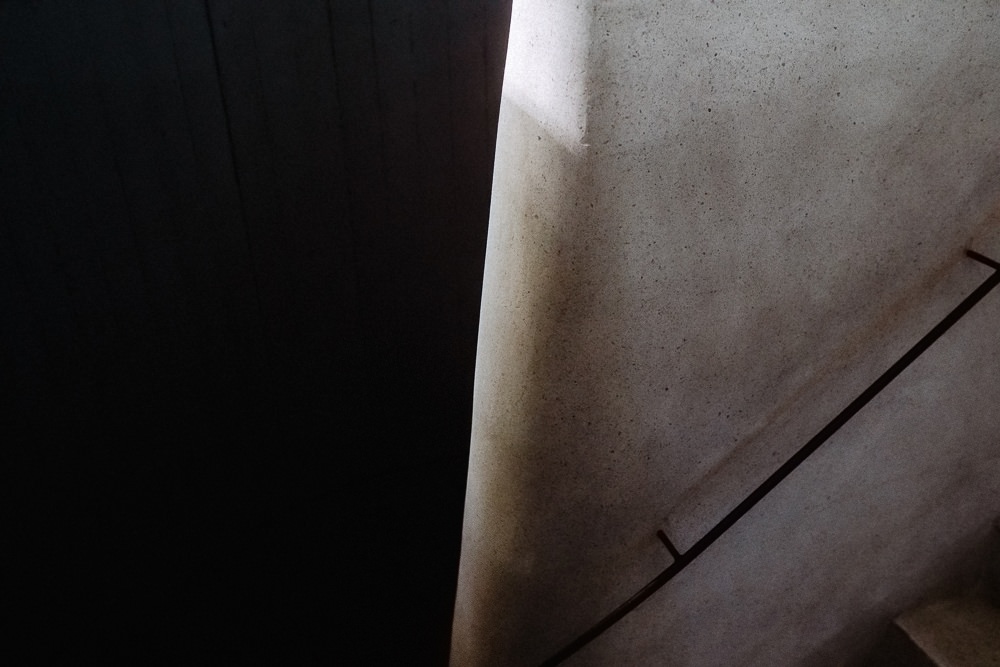 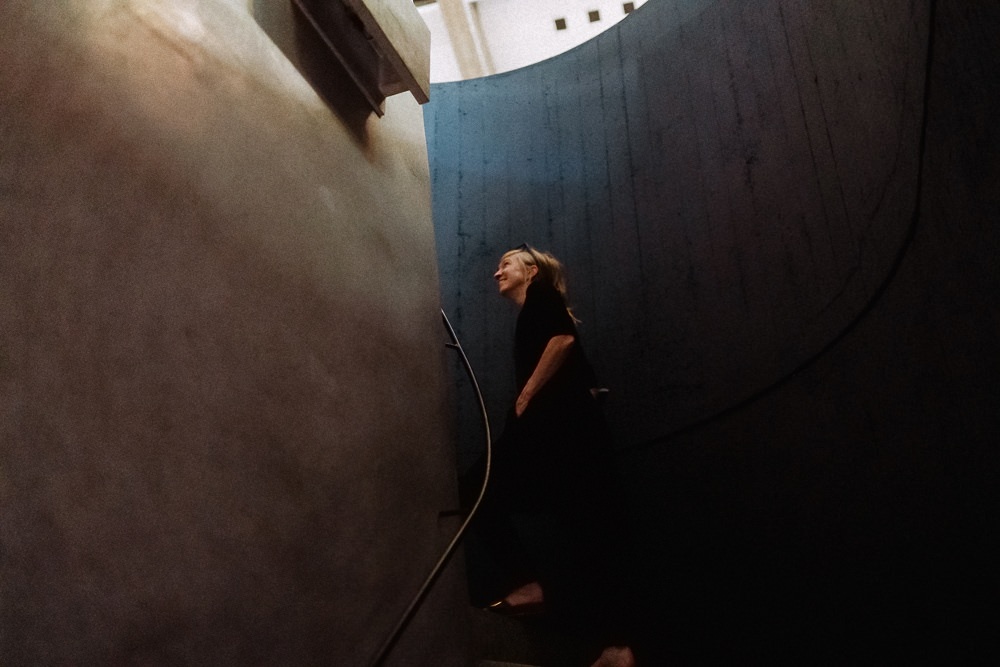 Director Daria Holme on her way to the gallery... 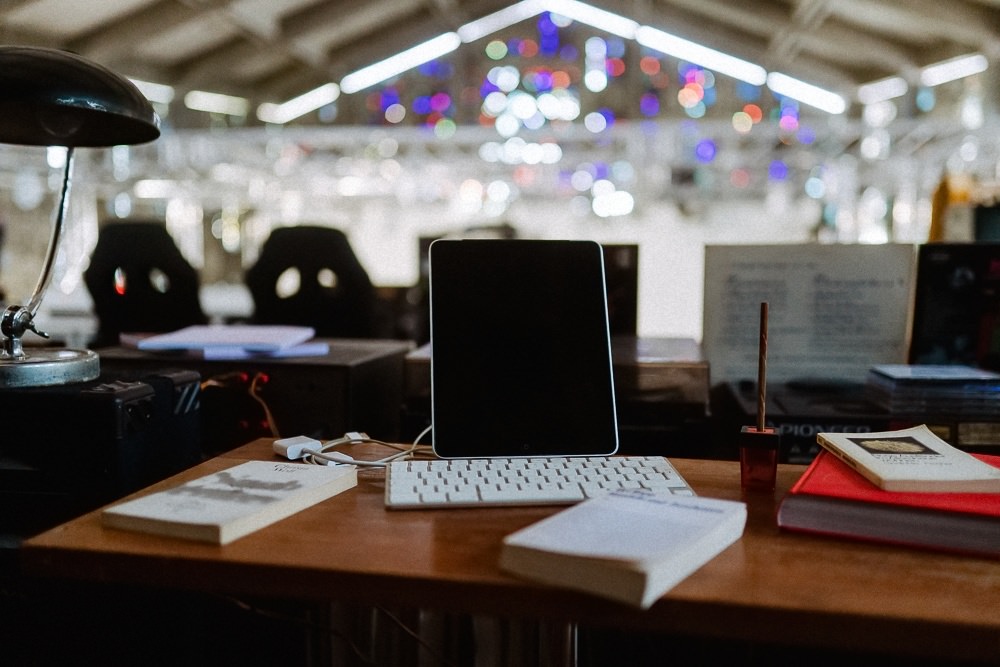 ...which hosts the technical equipment today. 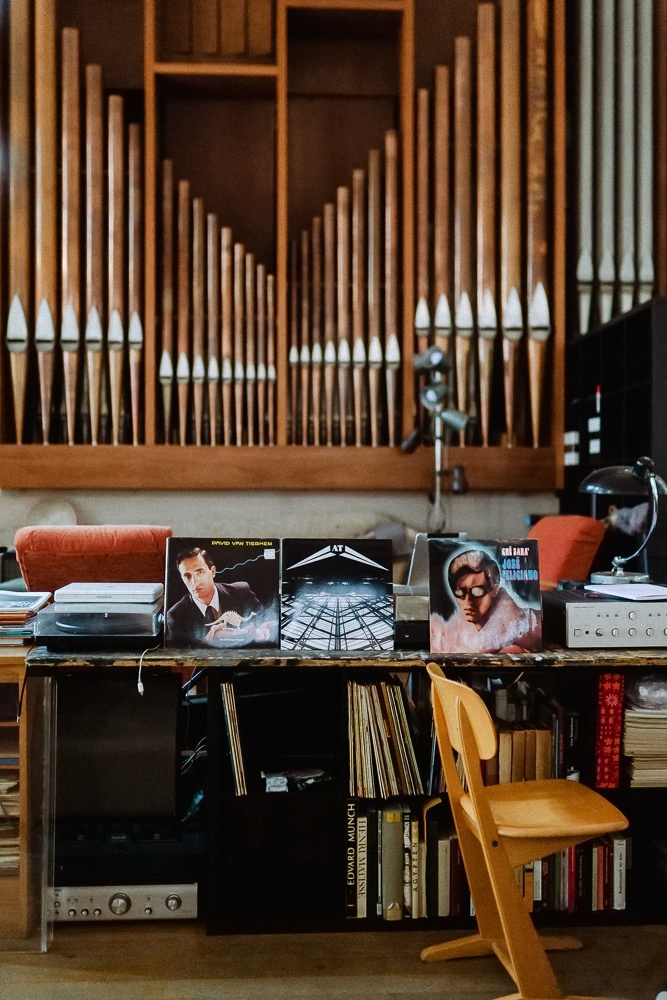 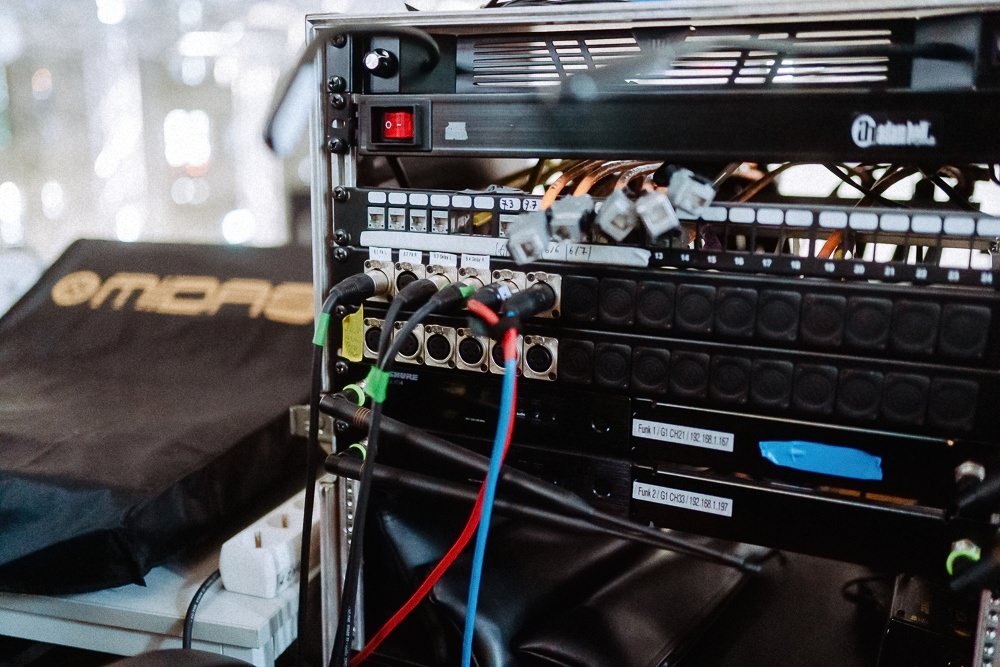 The new Trinitatiskirche was recognized internationally and celebrated in architectural circles and it has been a cultural monument of special importance since 1995. The parish, however, never really warmed to the cool concrete building. They used it less and less and it became quiet around in the Trinitatiskirche. As a consequence, repurposing plans arose even while Helmut Striffler was still alive. But these plans all failed—not least because of the architect’s fierce resistance. In 2015, the church called a competition into life to find ideas for an interim use of the building.

Right at that time, Daria Holme and the choreographer Éric Trottier were on a tour across Mannheim in search of a place for their idea: finding space for contemporary dance. Daria studied in Amsterdam and worked as a freelance graphic artist and cultural concept developer—first in the Netherlands, then in Karlsruhe and finally back in her hometown. Their initial idea was a mobile design, similar to the namesake “Einraumhaus,” which lends space to contemporary art in Mannheim. “We started off with lots of enthusiasm—and naivety,” Daria laughs. They soon realized that many conditions are imposed on projects with audiences, which dampened their enthusiasm. Then, they read about the ideas competition and thought: “Why not take a look?” And right at her first visit she knew that the place would make the prefect space for the EinTanzHaus. “It provided so many elements already”—a location directly in the city, good accessibility, a large and free room to be the stage, the height, the extraordinary atmosphere. The draft concept they finally submitted in cooperation with Mireille Solomon, an architect from Mannheim, “came to us virtually by itself,” Daria explains. “It felt just natural.” Their concept finally succeeded. What had once been a stage for lights has now become a stage for dance.

Having a permanently installed location right in the city gave their idea a new notion: “We wanted it to be an open house from the beginning.” The house was not to be a place that would open its doors on Friday evenings to a culturally interested community and would close them again after the weekend. “We rather wanted to create a meeting place for the neighbourhood. A place that would bring people together, no matter whether they come here for a particular event or not.” Daria is sitting on a bench near the entrance while she says these sentences. The sun is shining and the smell of freshly baked pizza wafts up the stairs. The Salerno pizzeria has placed tables and chairs on the terrace in front of the church. “It is a real stroke of luck,” Daria thinks about this neighbourhood: “We couldn’t have even planed it the way it has become.” A young couple rests in the shade on a stand around the large plane tree on the street corner. Their one-year-old daughter tiptoes over the wooden planks.

The doors of the church are open almost all the time. Curious visitors can even watch rehearsals. “People regularly turn up and tell us that they were baptized or married in this church and they are happy it was opened again,” Daria says. Every now and again, groups of architects come for a visit to the building, whose repurposing concept won a number of prices. And on special occasions, the local parish uses the church for services again. Apart from events on weekends, the EinTanzHaus offers workshops and courses for amateurs, such as creative dance for children, break-dance or a dance festival for senior citizens. Today, the church hosts a group of adolescents, who warm up for the Contemporary Technique & Junior Training course. “Never forget: There is no right or wrong. Find out the ways in which your bodies can move,” is the advice given by dance teacher Jonas Frey, who also directs the Junior Dance Company, founded in 2018, together with Julie Pécard.

“Contemporary dance is driven by the search of possible movements of the body and doesn’t aim at finding perfect sequences,” Daria explains. To her, dance primarily means motion. Both on stage and throughout everyday life. “You’re actually in motion every time you cross a street, every time you make a gesture, every time you hug a person, or even, every time you talk to somebody. So, my understanding of dance is that of a thing that really connects people.” And this is the exact way she wants to convey dance with the EinTanzHaus project.

This interim use of the building was intended to be in place for an original three years only. In summer 2020, the period was extended by another three years. In her draft, architect Mireille Solomon was careful to intrude on the architecture of the church as little as possible. Technical equipment is stored on the gallery and the dressing-room is in the area of the altar. The pulpit, the font and the altar were built over for this purpose—and are, at the same time, protected through this measure. All modifications can be easily reversed. The former church benches are now part of the stands and about six metre high metal scaffoldings surround the stage in the interior to fix lamps and black curtains. However, it never gets completely dark in this church—neither completely quiet. Light and noise from the town always get through: bird’s chatter, playing children, cars passing by. “I think it’s great,” Daria says, “that everybody, who appears here, has to communicate with the church and with the town.” It is a house that truly encourages encounter. 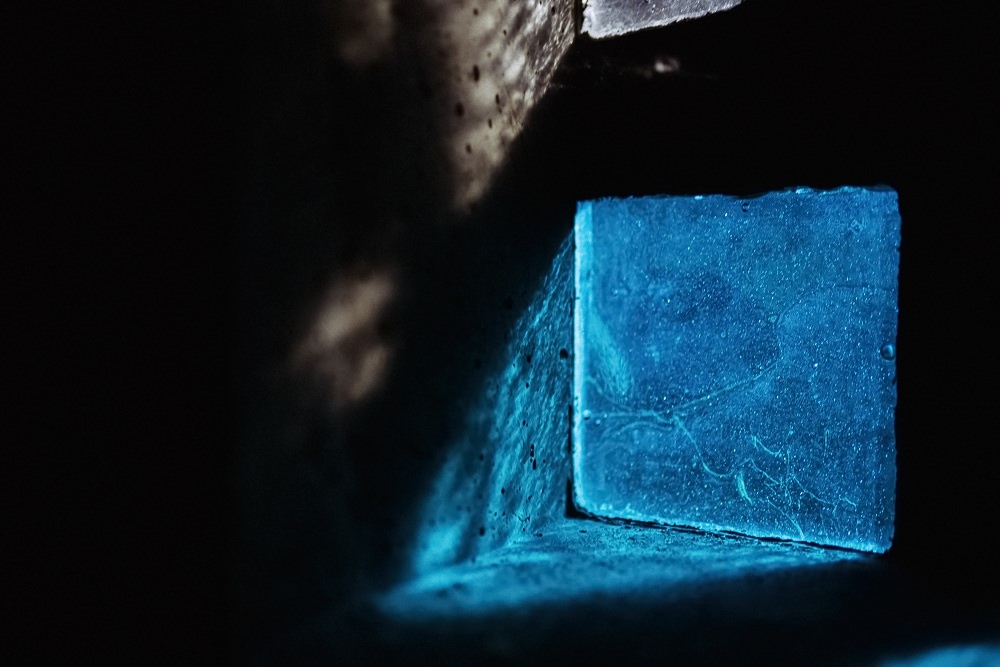 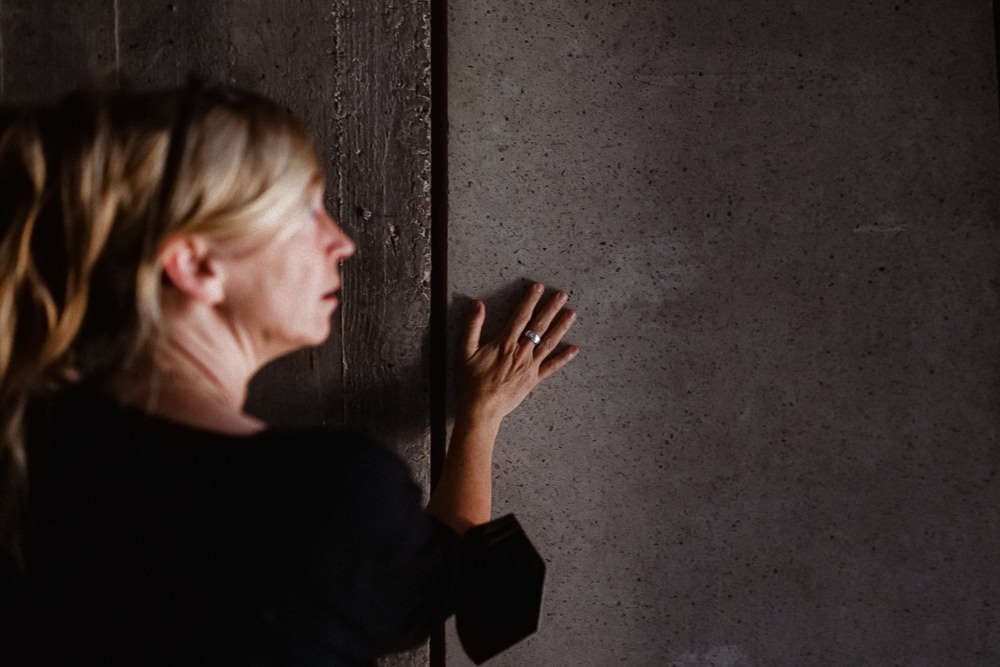 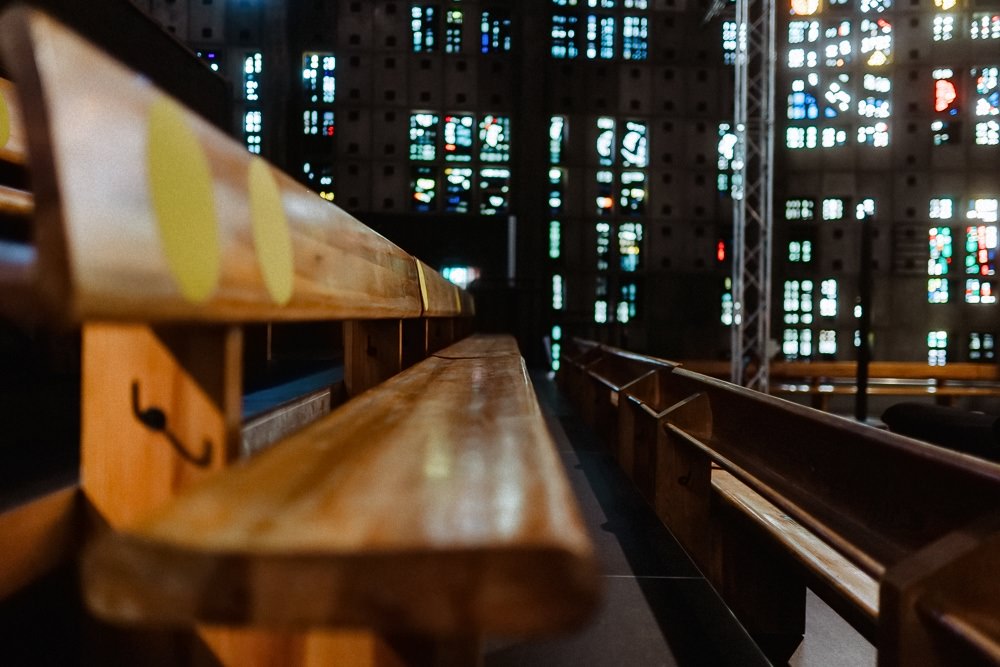 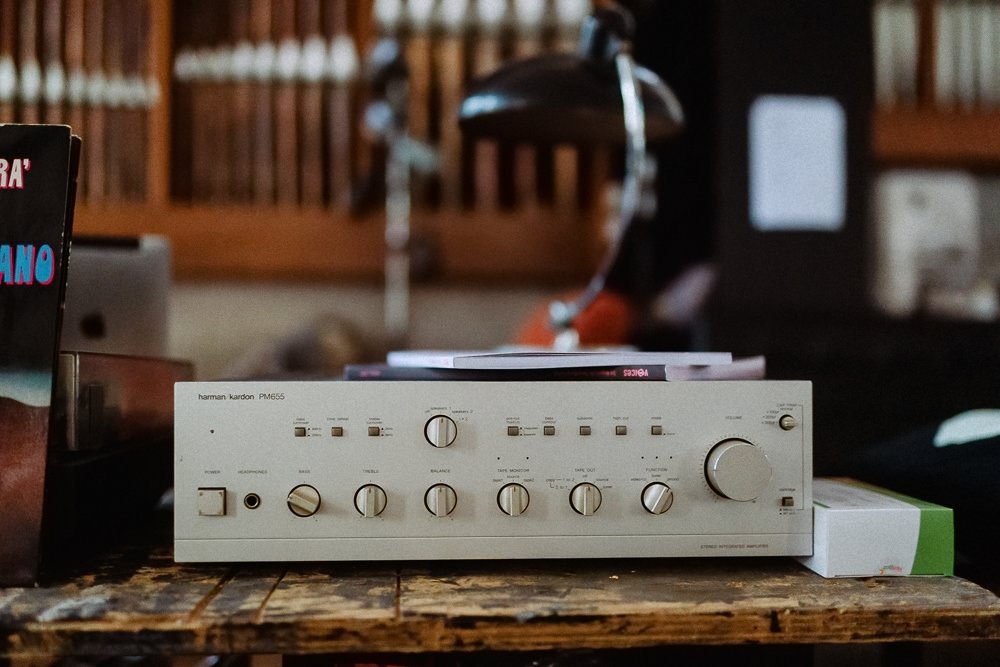 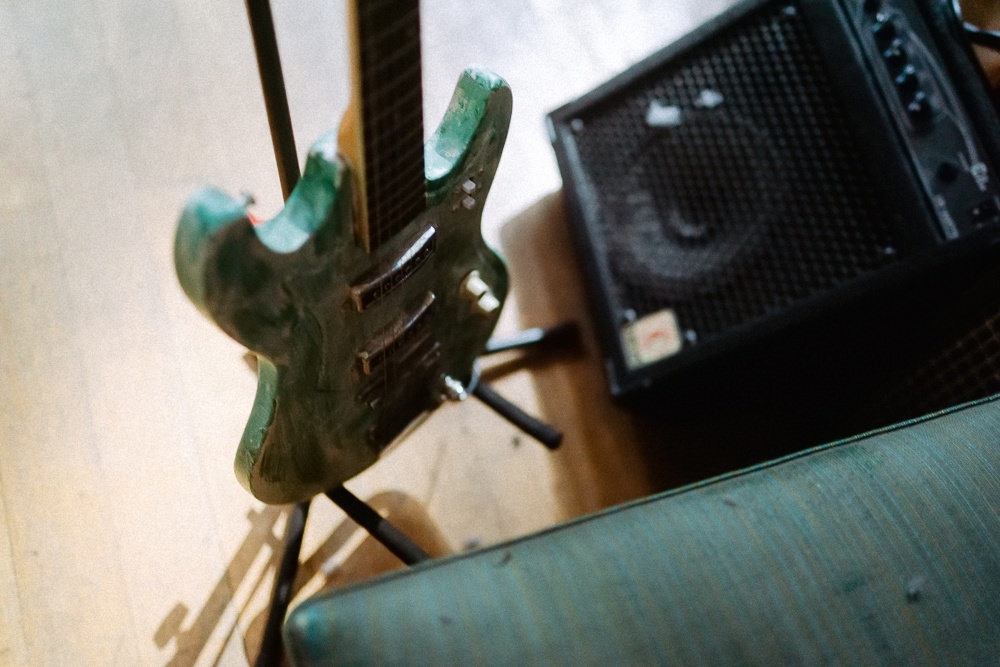 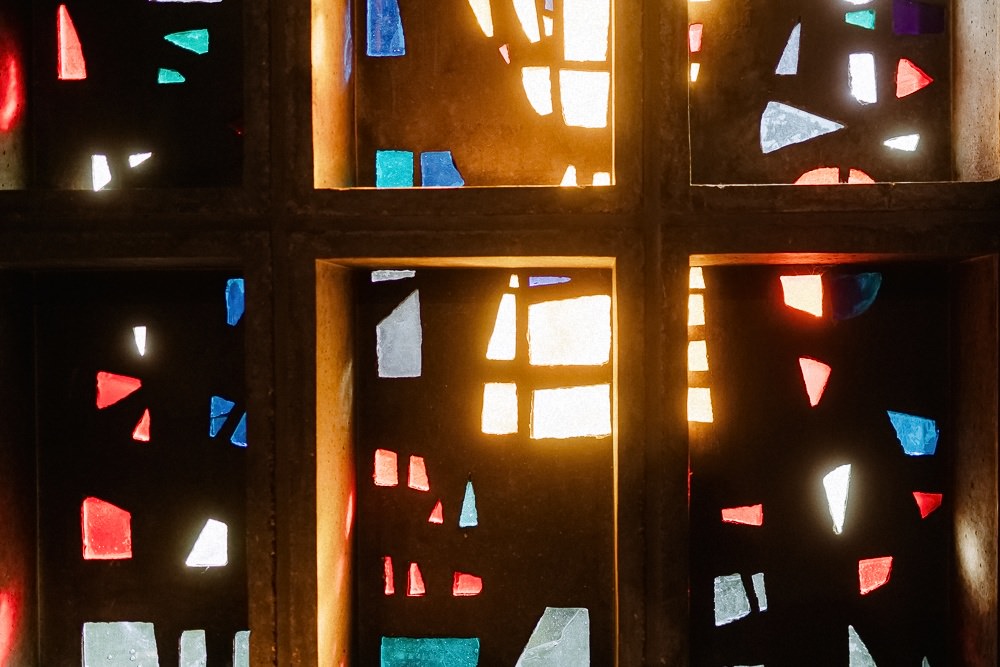 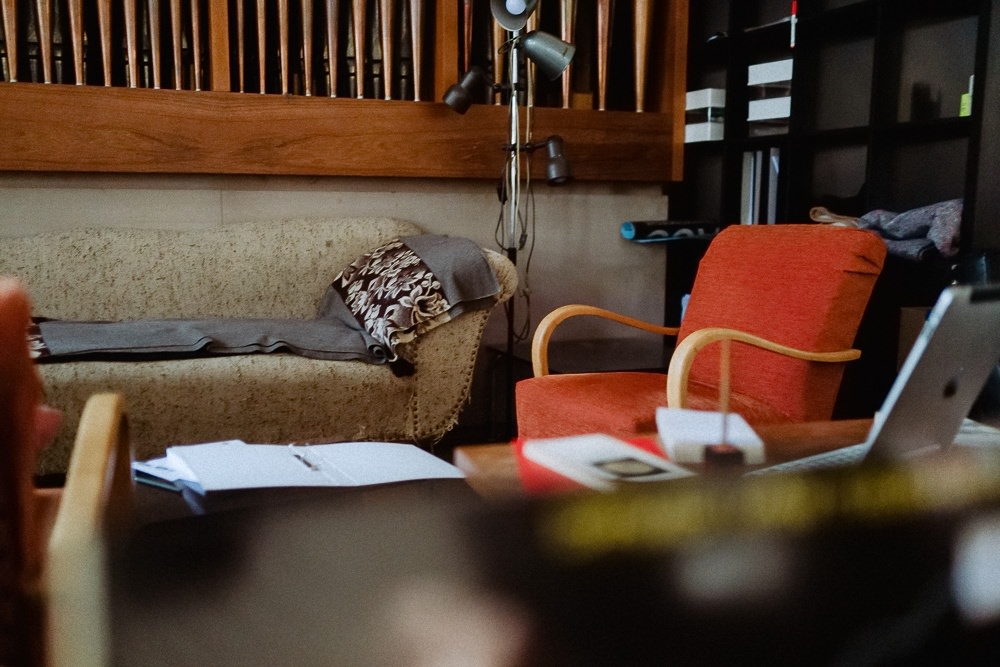 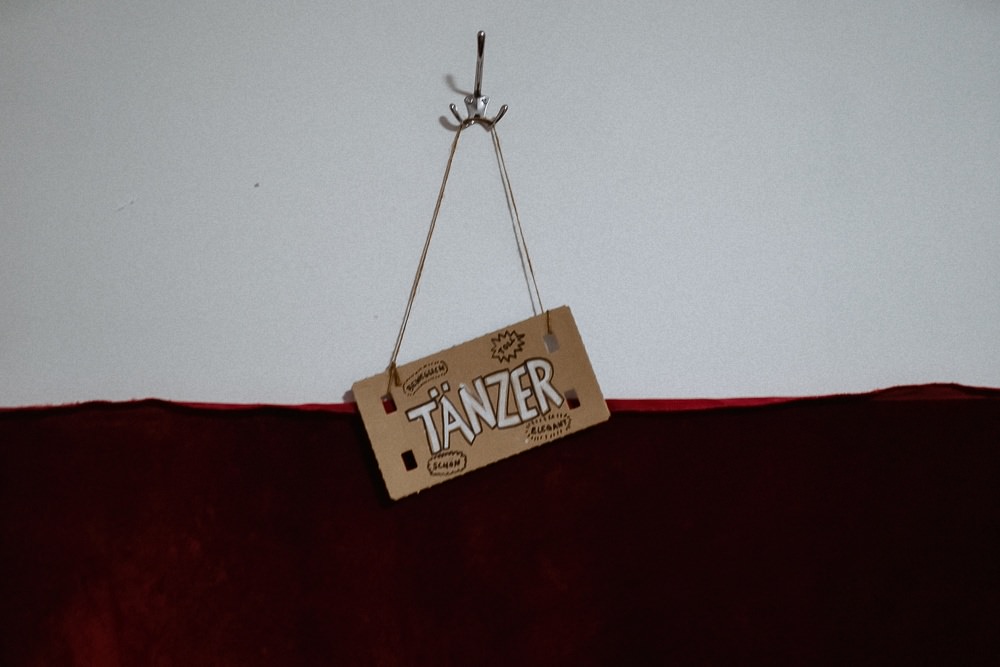 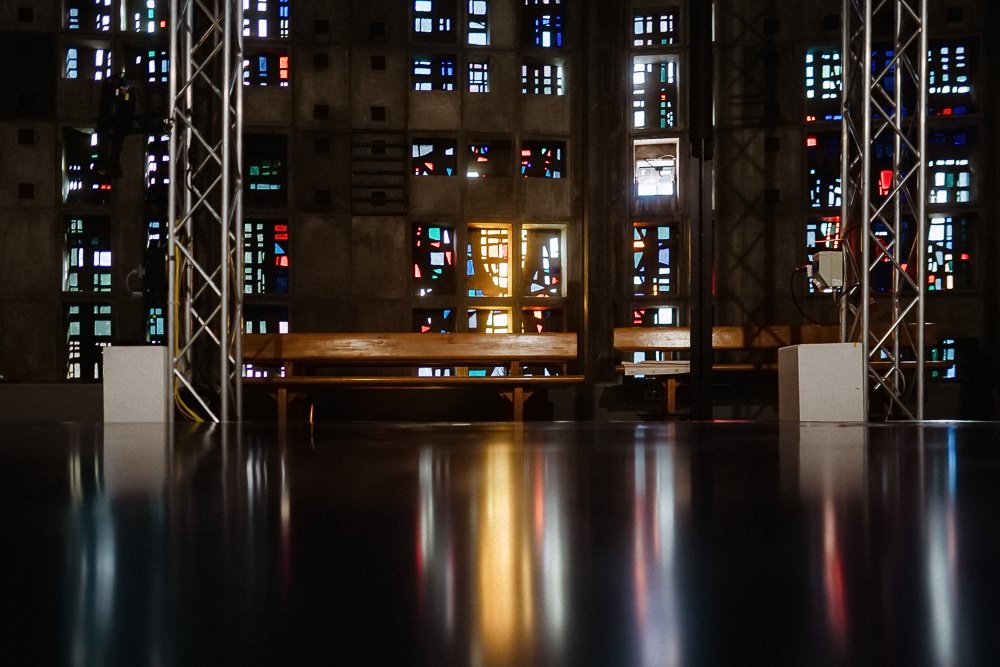 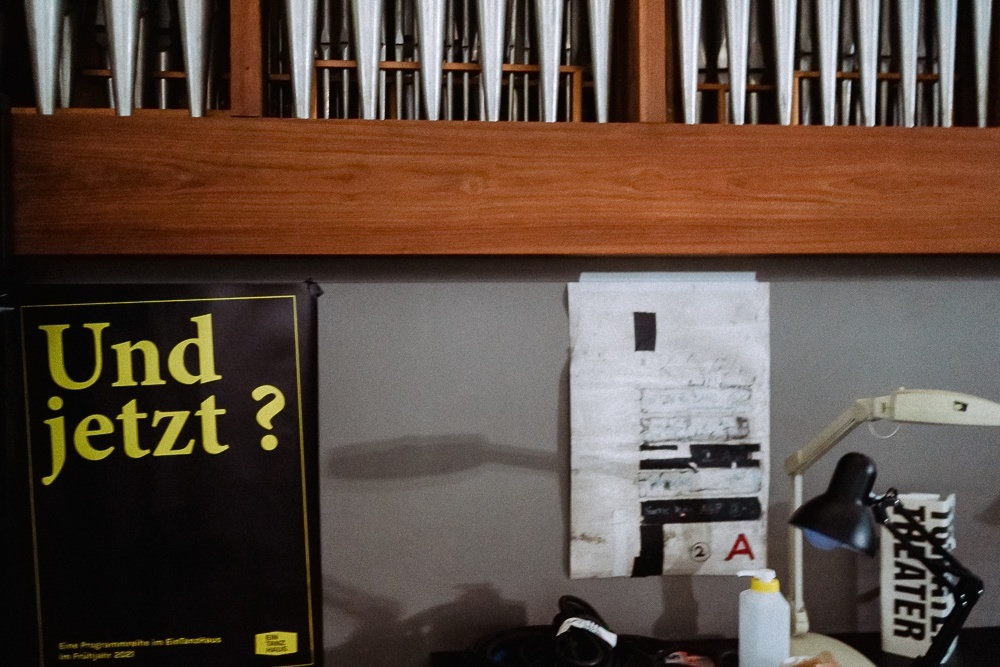