We are on an obstacle course through Mannheim across walls and stairs and over the entrances of underground car parks and fences. Tim Weickenmeier has been intrigued by parkour since he joined a team at school. Today, he passes his enthusiasm on to others through training courses and he is convinced: “Everybody can learn parkour!”

Maurice Meyerhoff stands totally still for a couple of seconds. He forgets about the tram behind him, about passers-by and that woman at the window in her apartment on the third floor, who is directing the camera of her phone at him. Maurice stands behind the Museum Weltkulturen, a part of the Reiss-Engelhorn-Museen (REM) museums in Mannheim. In front of him, there are walls and ventilation shafts. He measures the distance with his fingers and estimates the appropriate number of strides. Then he takes a pace backwards, flexes forwards and jumps with long strides over the ventilation shafts—to land on the sloping wall of the museum a moment later. Tim Weickenmeier observes every move his friend makes. “Cool, man! You just need to push up a bit more!” Maurice tries it again—and manages to hold on to the wall covering. On his next go, he adds a flip.

Tim and Maurice are freerunners. And friends. Together, they are regularly on the move through the city: along the REM museums, the Neckar river bank, in front of the Abendakademie adult education centre or at the Collini-Center—anywhere, where façades and walls, stairs and brick walls, fences and railings make appropriate obstacles. The idea is to pass them—as fast and efficiently as possible in one attempt, as creatively as possible in another. They mix elements of parkour, which is mainly about efficient movement, with those of freerunning, which aims mainly at creative body usage. “Personally, I don’t care much about this distinction,” says Tim. “The main point is to have fun.”

He describes parkour this way: “As a child, you never walk along the pavement, but rather balance your way across a wall or clamber up somewhere rather than using the stairs. We have simply never stopped this behaviour.” Doing parkour is allowed basically everywhere in public environments. And it is part of the scene’s code of honour to not leave any traces on the obstacles. You must only keep off private property and roofs, as it is illegal to enter these without permission. 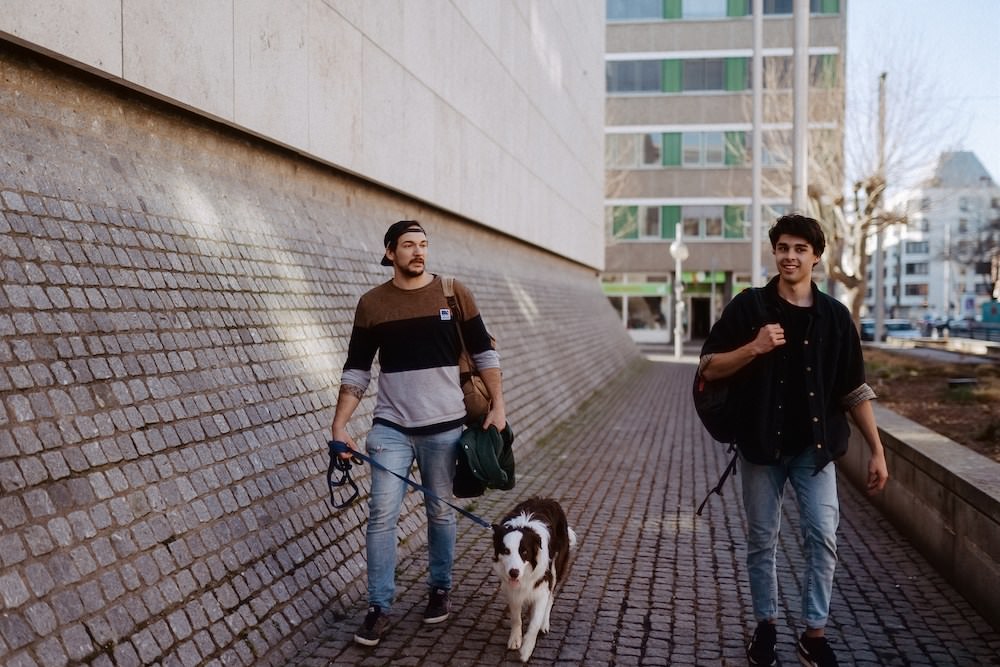 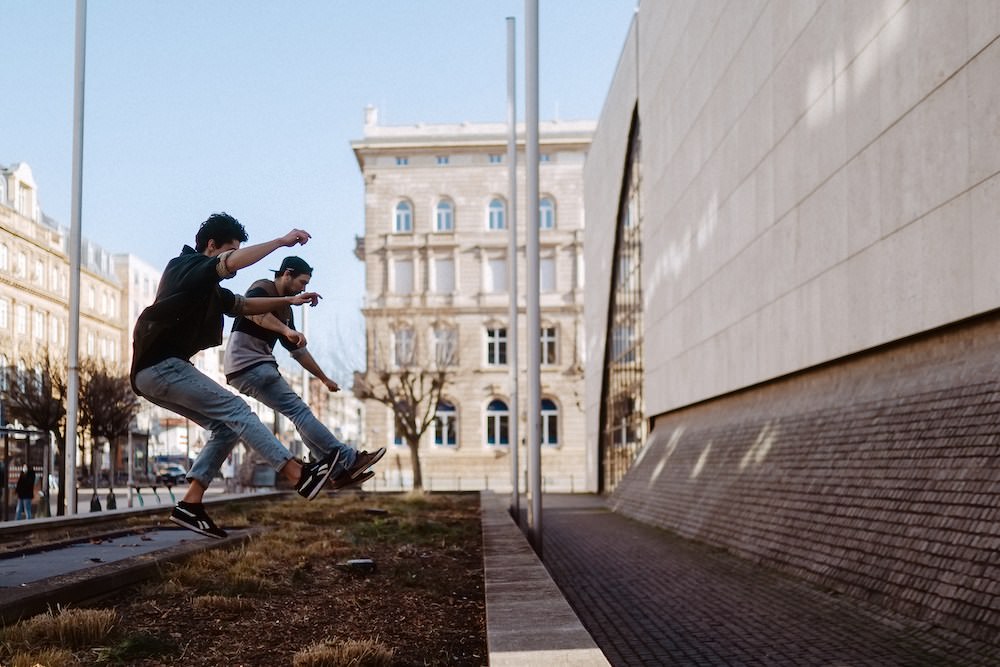 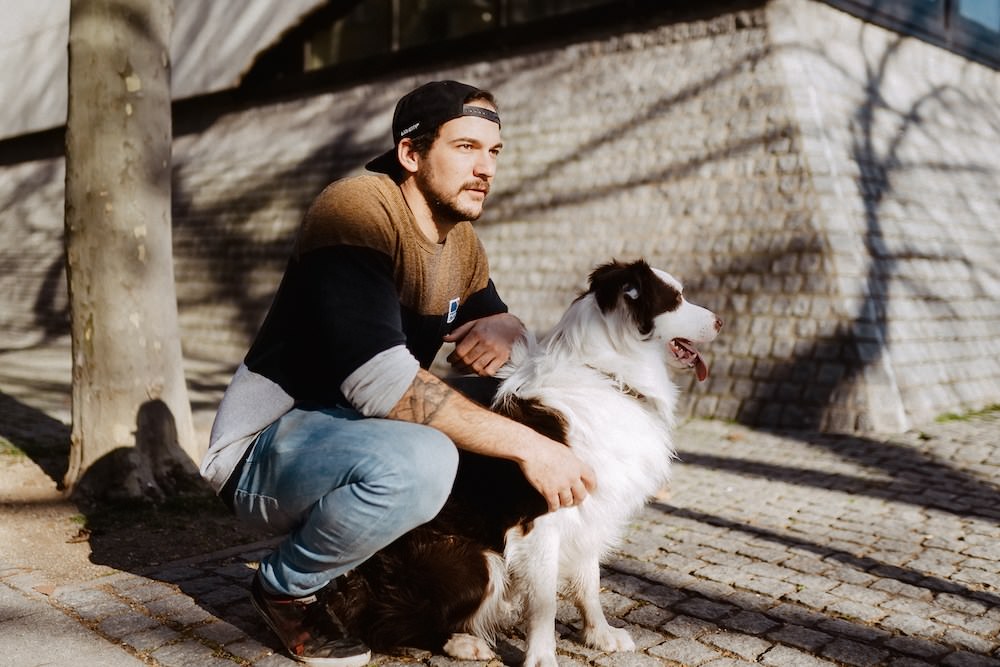 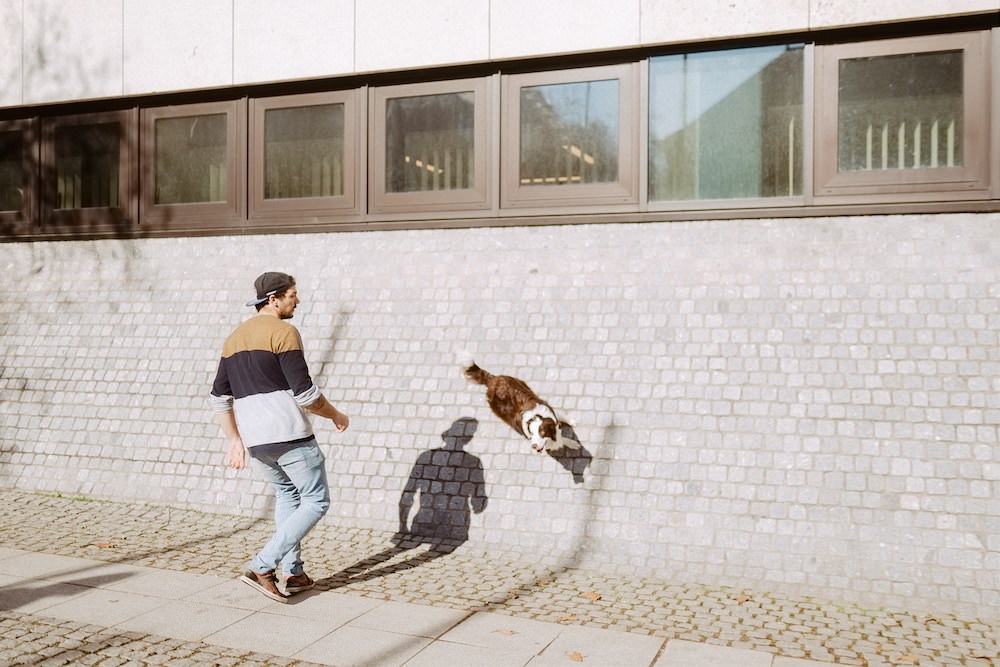 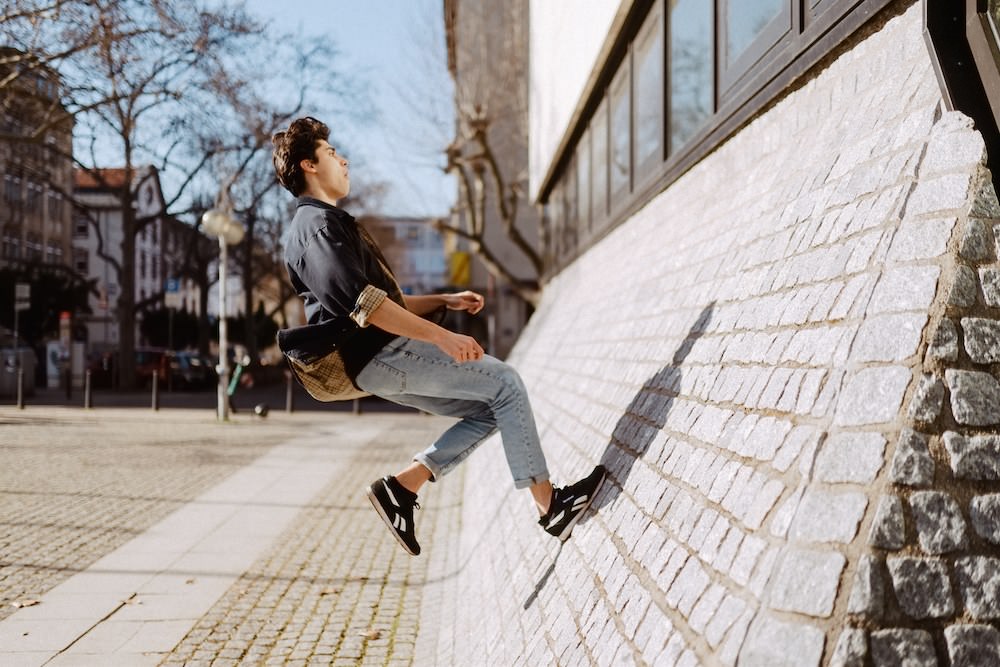 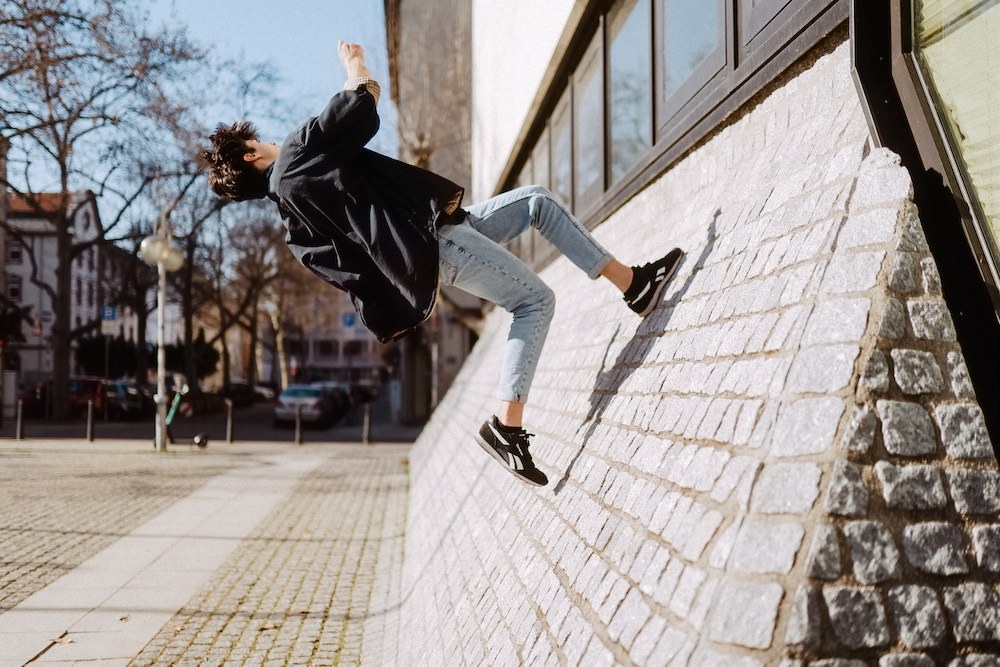 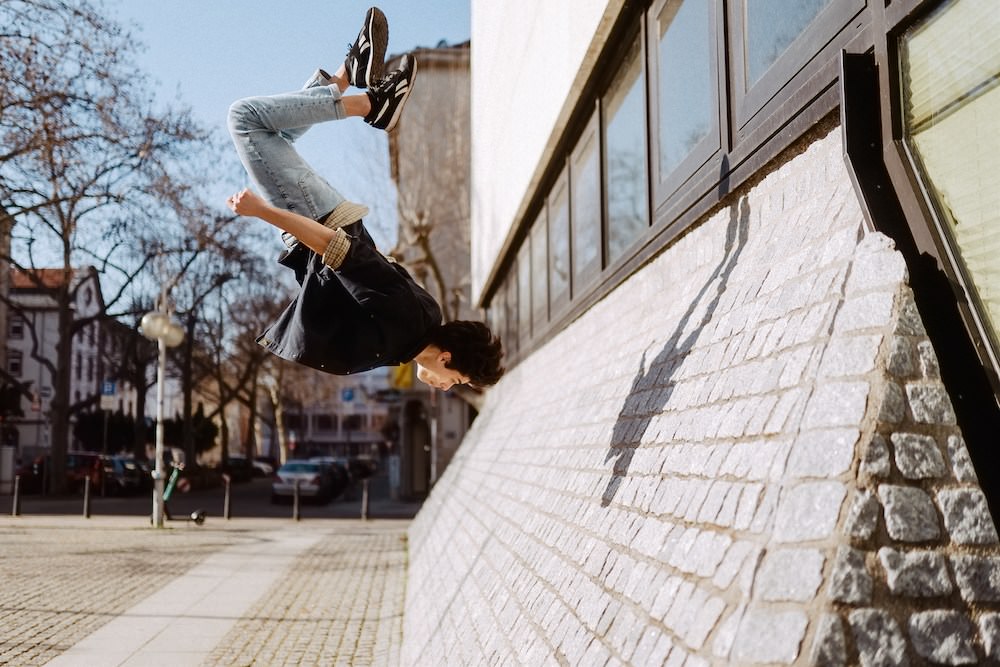 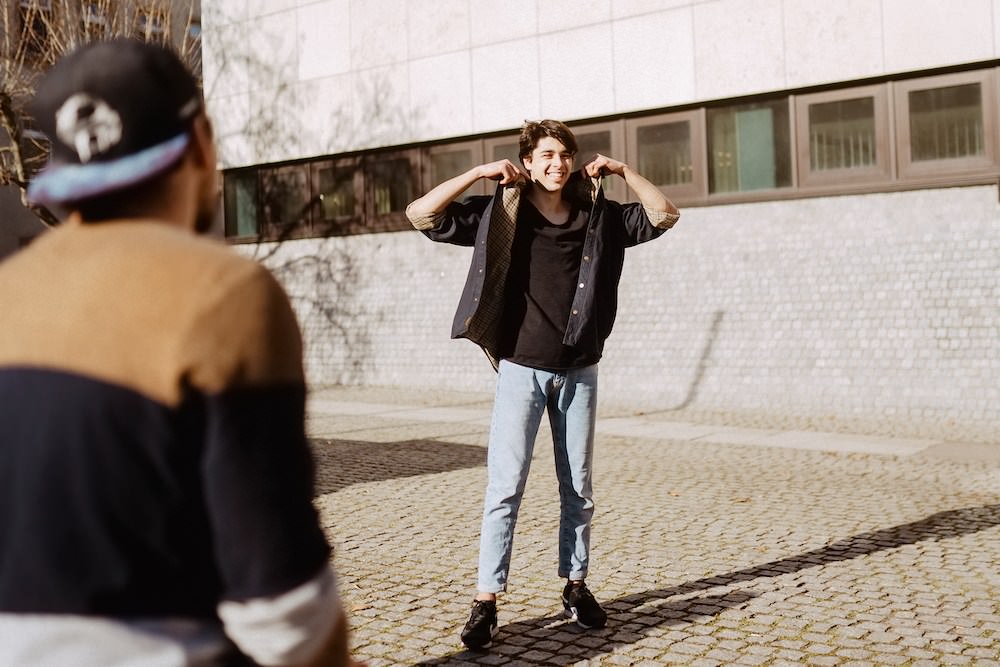 Parkour emerged in the late 1980s in France. The trendy discipline boomed in the 1990s and 2000s thanks to films and documentaries and reached even Speyer. A schoolteacher of Tim was fascinated by this kind of movement and offered a course at school. “Our teacher didn’t really know what he was doing there—but he was enthusiastic and motivated. And I was intrigued straight away. We set out a range of sports equipment randomly throughout the sports hall and started running around.” At that time, Maurice was 13 years old and really enjoyed to act his desire for movement out so freely. “There are no regulations, you are not given posture marks—I found that great.” Later, he became the instructor of the class and took it over with a few friends—they had long become better than their teacher.

After he had completed school, Tim trained as a car mechanic. But he never got used to the idea of doing this for the rest of his life. So he packed his backpack and travelled through Australia and South East Asia. “I don’t like imposing restrictions on myself. Neither for thoughts, nor for movements. I really enjoyed the freedom on my journey, this vagrant lifestyle.” After that he knew that he wouldn’t grow happy as an employee and should rather do his own thing. He was already well connected inside the German parkour scene. “It may sound like a cliché, but we are actually like a big family,” no matter which town he visits, he can always be sure to find a sofa to sleep. So, he and a colleague from Berlin founded the Parkour Akademie and have focused since then on passing on the discipline in the most realistic manner possible. “We want people to rediscover their joy for movement,” says Tim.

Tim moved to Mannheim for his new job as a coach. The town has become a popular location in the continuously growing scene. The German movie ‘Parkour’ that came out in 2009, was shot in Mannheim’s industrial scenery, the SPRING!BAR parkour hall provides a training space when the weather is not suitable outdoors and even the terrain in preparation for the Bundesgartenschau horticulture show to be held in 2023 will include a parkour park—Tim is involved in its design. “In Mannheim, there are many places, where you can train. This urban sports fits well into such a down-to-earth city.”

Tim offers two courses per week—for all age groups. He also offers workshops at schools or youth centres. Demand has grown rapidly. Until the COVID pandemic forced him to have a break. He has used it at least for one thing. Tim points at his foot. He has recently undergone surgery, an ossification. That’s why it’s not him, who hangs on to the museum wall today and why he leaves most of the flips to his friend Maurice. “There is basically just one rule in parkour: Pay attention to your body! I have to admit that I haven’t always followed that.” He grins a bit contritely.

Next to him, Maurice takes a run-up, races up the wall of the museum and makes a backflip. Right in this moment, Tim’s dog Kiba runs up to Maurice, who, still in the air, spreads his legs and lands with his legs apart above the dog. He laughs while Kiba jumps up on him as if she wants to congratulate him on the successful trick. “I saw her coming and just reacted.” This sounds as if much more time passed for him than for the observer. Enough time to reconsider the entire sequence of movements up in the air. “This becomes a routine, sooner or later,” he says and flexes away.

His movements look light and flowing, effortless. Regularly, passers-by stop and take out their phones to take a video shot. And probably none of them thinks what Tim is going to postulate a moment later: “Everybody can learn parkour.” Everybody? Seriously? “It’s not about mastering the greatest possible number of tricks, but about enjoying movement.” In his courses, he trains children, adolescents and adults. Ranging from 10 to 60 years and from thoroughly fit and athletic to overweight. “This is the beautiful thing about parkour: You can adapt training individually and do exactly what your body can manage at that moment. And then improve gradually.” And just a couple of kerbs are enough to start the training. “The aim is to get to know your body. To learn to assess how much energy and momentum you need to jump from one kerb to the other.”

To acquire new acrobatic tricks, Tim and Maurice have a certain order: New tricks are trained on a soft ground first. Maurice got himself a trampoline for this purpose and Tim practices in a hall on an Airtrack. Then, they move on to doing the trick on the mat. Then, on the lawn. Only when they have enough control, they practice on concrete. And before you take to heights, you practice falling—landing, rolling, diverting high g-forces when doing jumps from a great height.

Both of them prefer training as a group, giving each other tips and helping each other. “It’s not about being better than somebody else. But about becoming better for yourself,” says Maurice. There have been many attempts to include the discipline in the Olympics programme. But there have been many oppositions from inside the scene, too. “I suppose, a style for competition, which can easily be evaluated, will develop sooner or later,” says Tim. For him, however, the individuality of movements remains the most important thing about his sports. And the freedom to be able to act this pleasure out everywhere. So, parkour, for Tim, means interaction with the environment. Towns reveal to him through the perception of his body—without leaving any traces of himself. 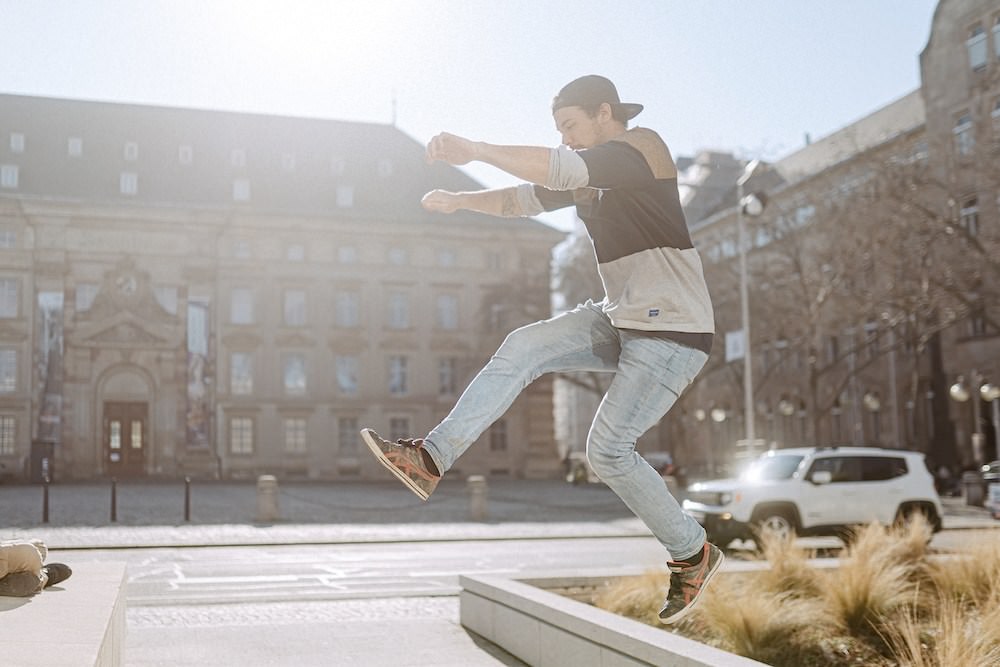 The Art of parkour: 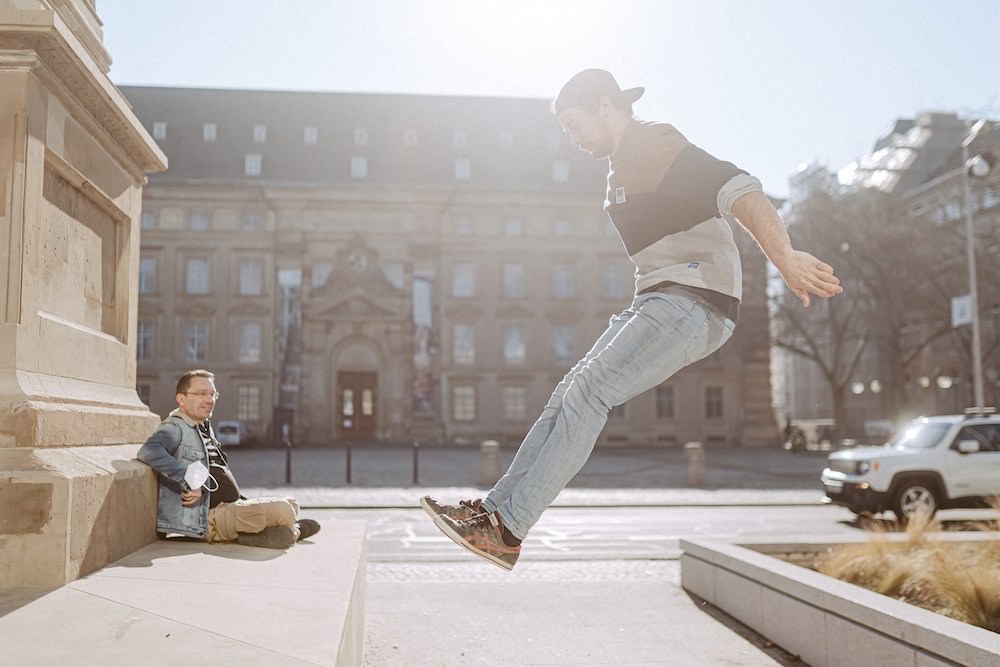 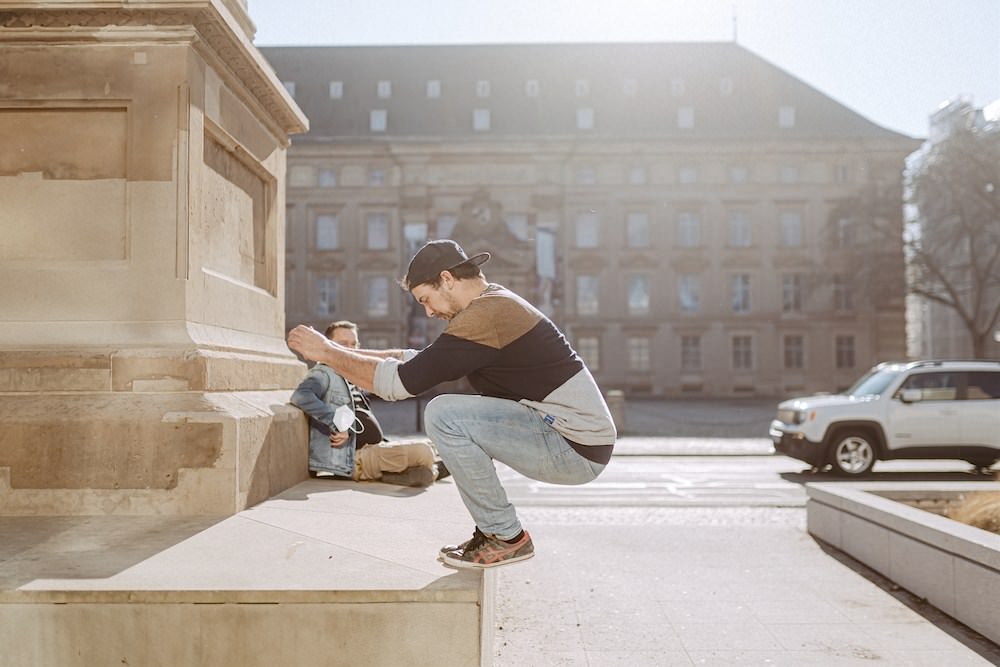 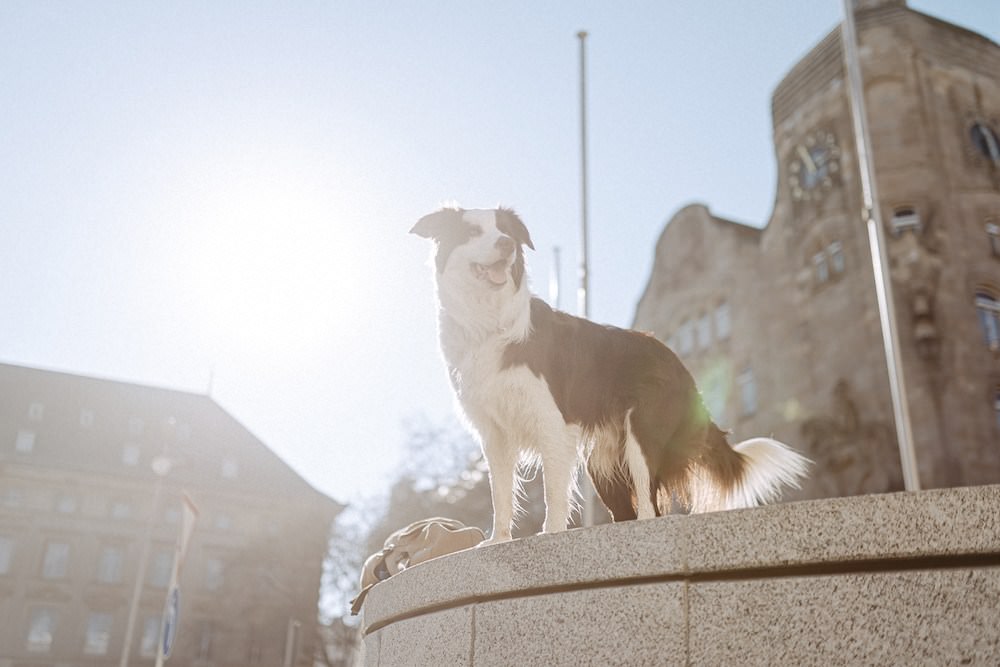 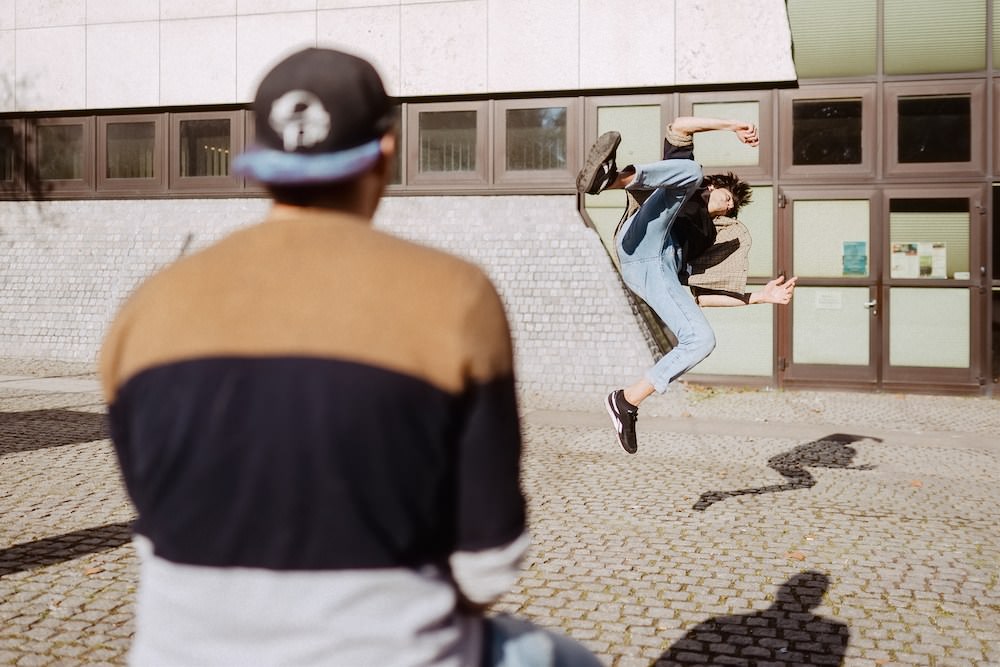 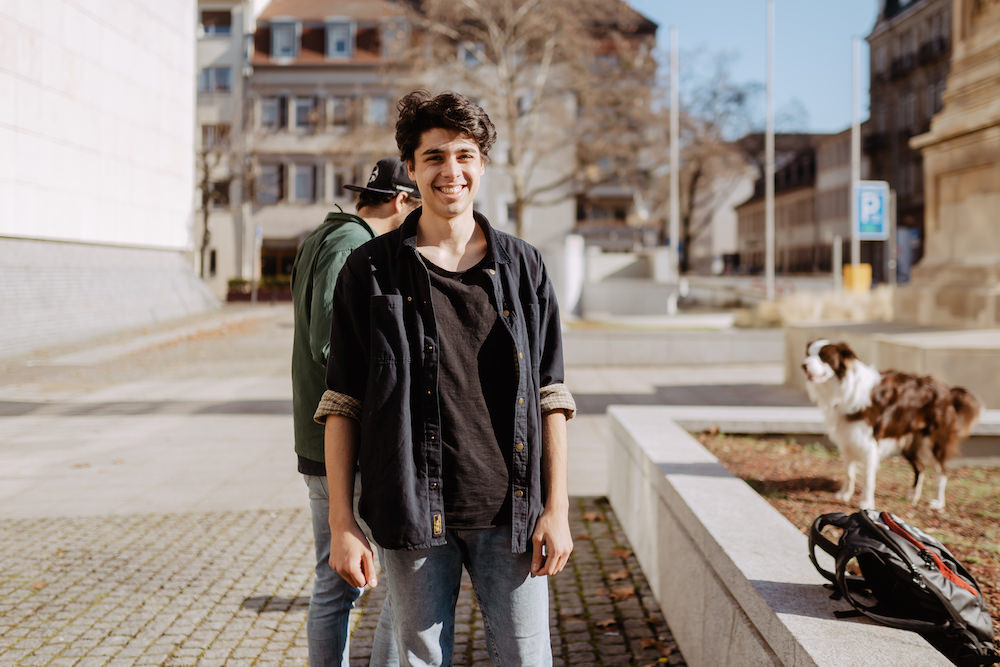 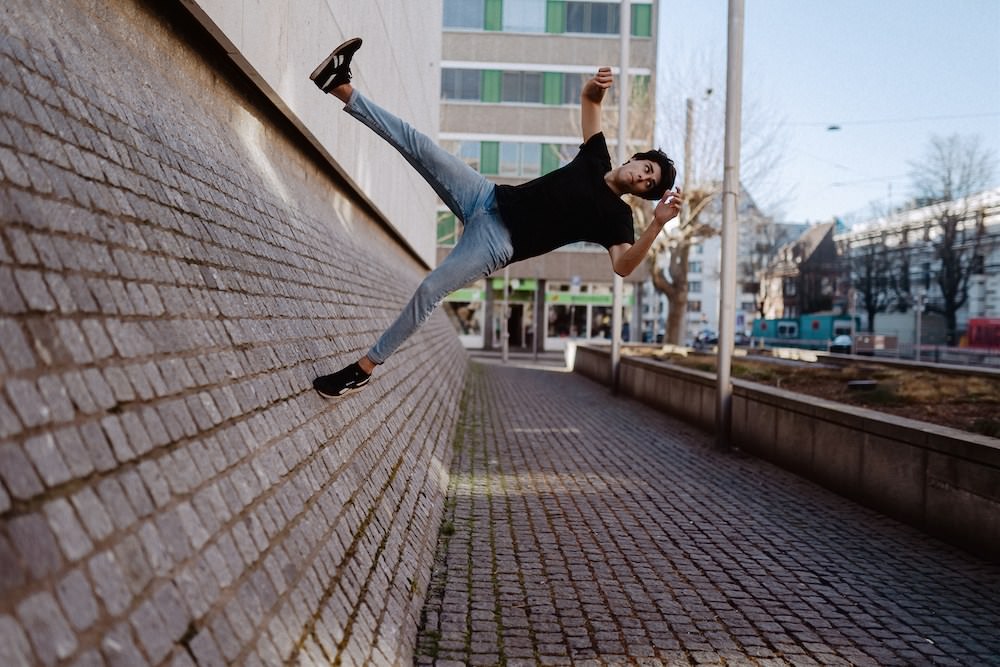 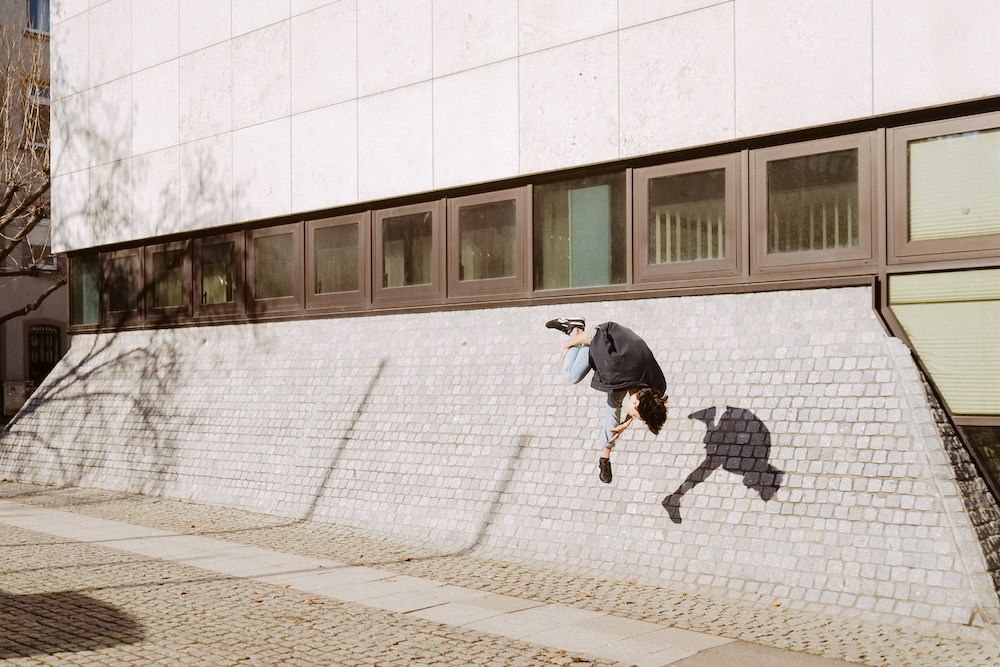