For 26 years, Karl and Silke Hofstätter roamed Europe’s rivers on board their hotel ship “Liberté,” before finally setting sail for new shores. With the Heidelberg-based “Weisse Flotte” and their brand new flagship “Königin Silvia,” they are reinventing the tourist cruise—and inviting culture on board.

It is a sight to behold: making an about face with the “Königin Silvia” (“Queen Silvia”). Manoeuvring the massive girl is no easy feat—unless you are Captain and CEO of “Weisse Flotte” (“White Fleet”) Karl Hofstätter. But just off the shore of “four-castle” town Neckarsteinach, he calmly turns the 60m long and 11m wide behemoth back to the west—back towards Heidelberg.

Heretofore, the passengers have experienced and seen a great deal atop the river: they began at the Heidelberg Stadthalle (City Hall), directly across from the Philosophenweg (Philosopher’s Walk). No matter if you’re British, French, American, Bavarian, from the Palatinate or Sauerland, once the ship stirs, you don’t. You just simply look and behold. The Heidelberg Castle, the Benedictine monastery Neuburg Abbey, Dilsberg Castle and the four castles near Neckarsteinach all create a hard-to-believe romantic ambience that captivates one and all.

“You really see what a change of perspective can do,” says one such captivated passenger. From atop the sundeck, the Neckar river seems wider and larger than from ashore. The hustle and bustle of the city fades to memory, the lumbering journey soothes and calms. “It’s the polar opposite to the hectic existence of life on land,” says the captain.

The “Old Bridge” of Heidelberg from a different perspective.

Maybe also because the sundeck on the modern “Königin Silvia” is full once again—the three-hour “Castle Trip” to Neckarsteinach is a mainstay for “Weisse Flotte”. Yet for Karl Hofstätter, such excursions are only one aspect of his job. His and his wife’s true motivation lies in establishing a line of culture and entertainment cruises along with the ones for tourists. 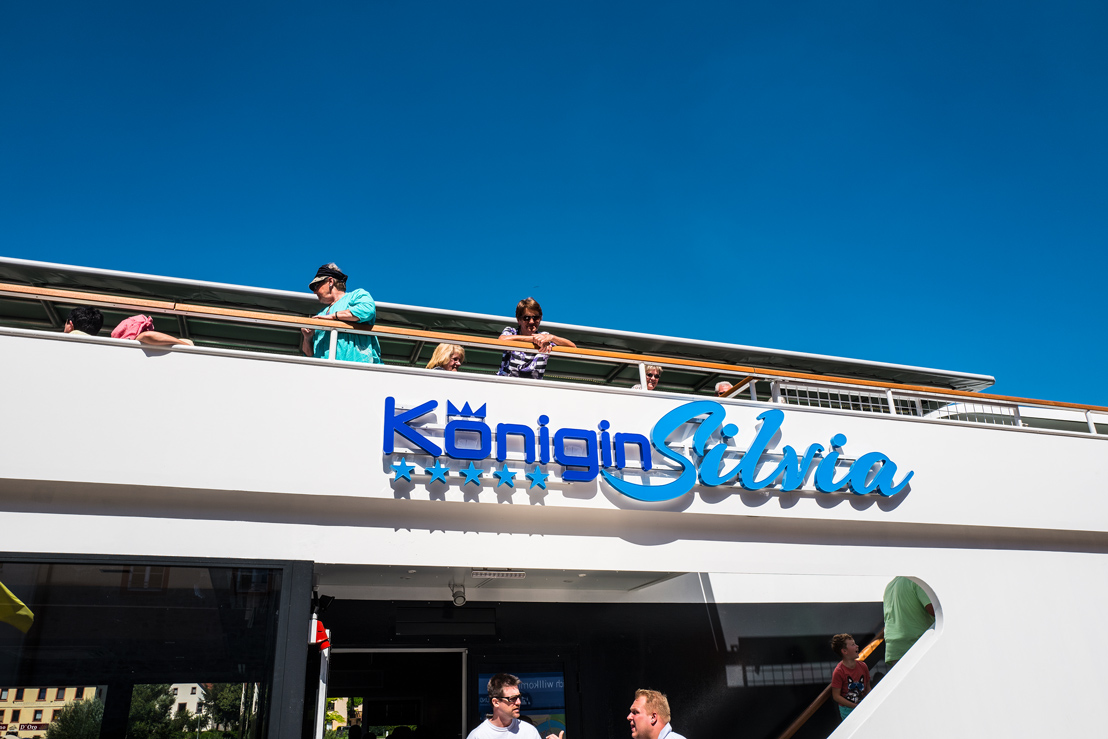 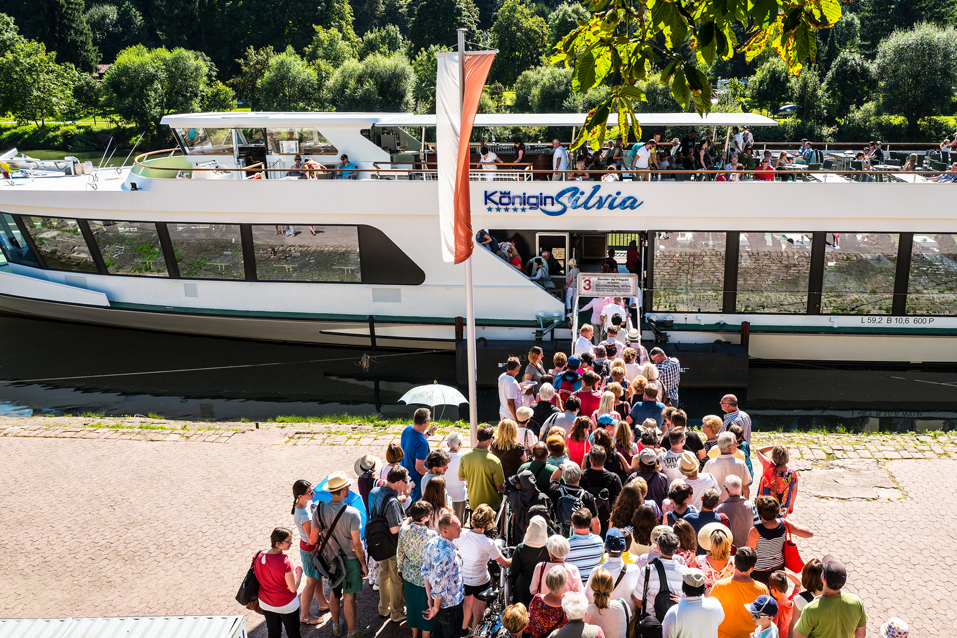 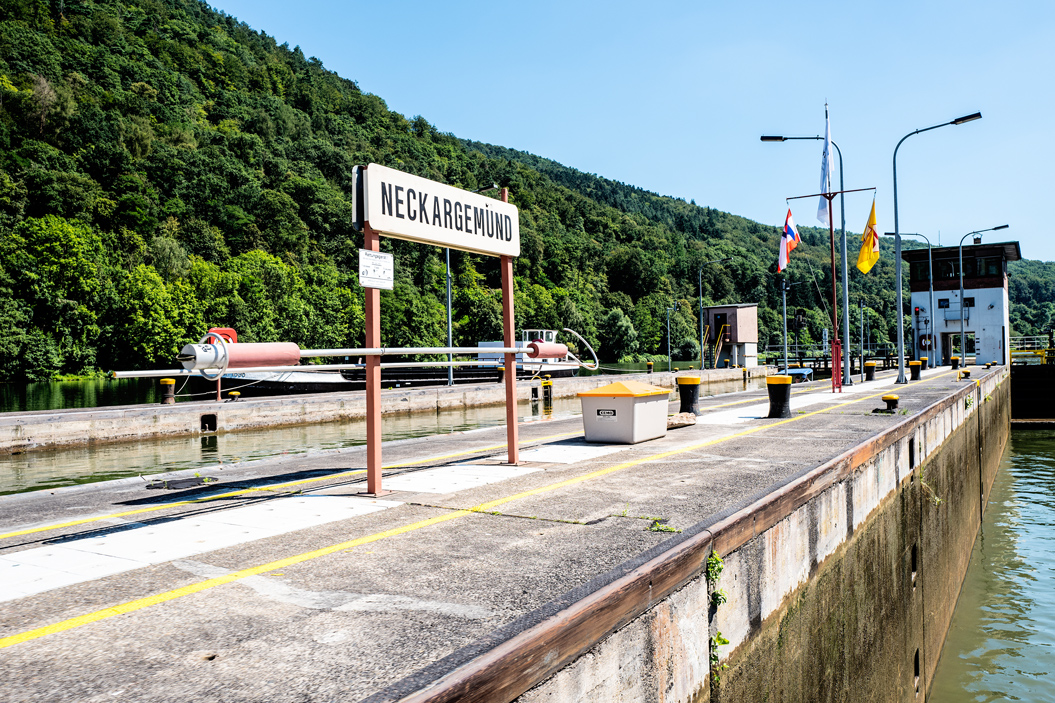 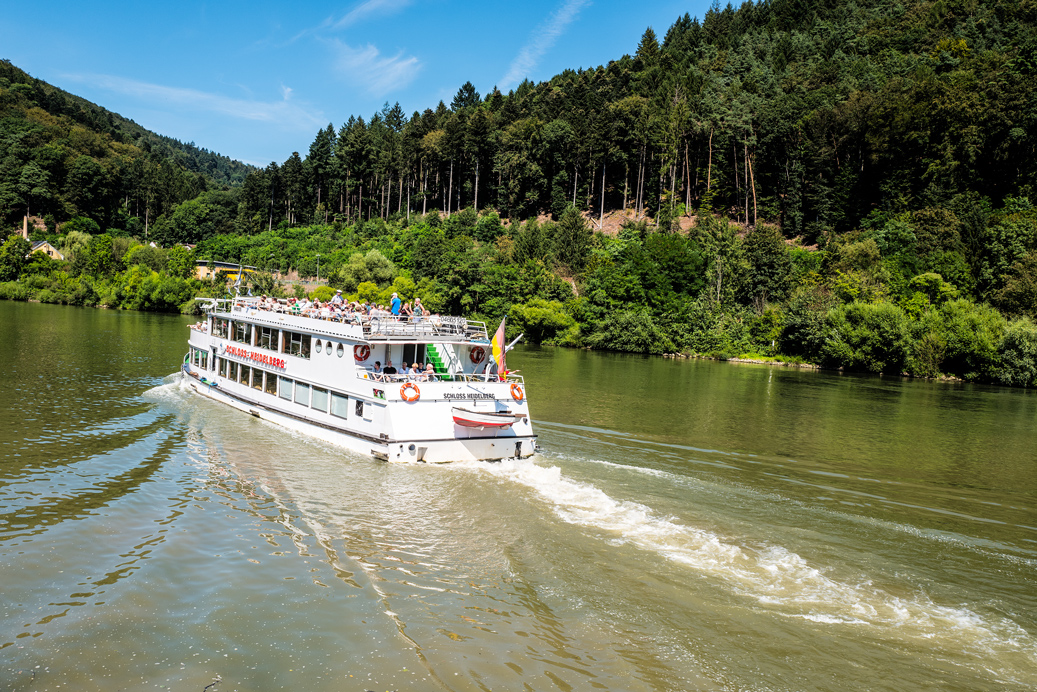 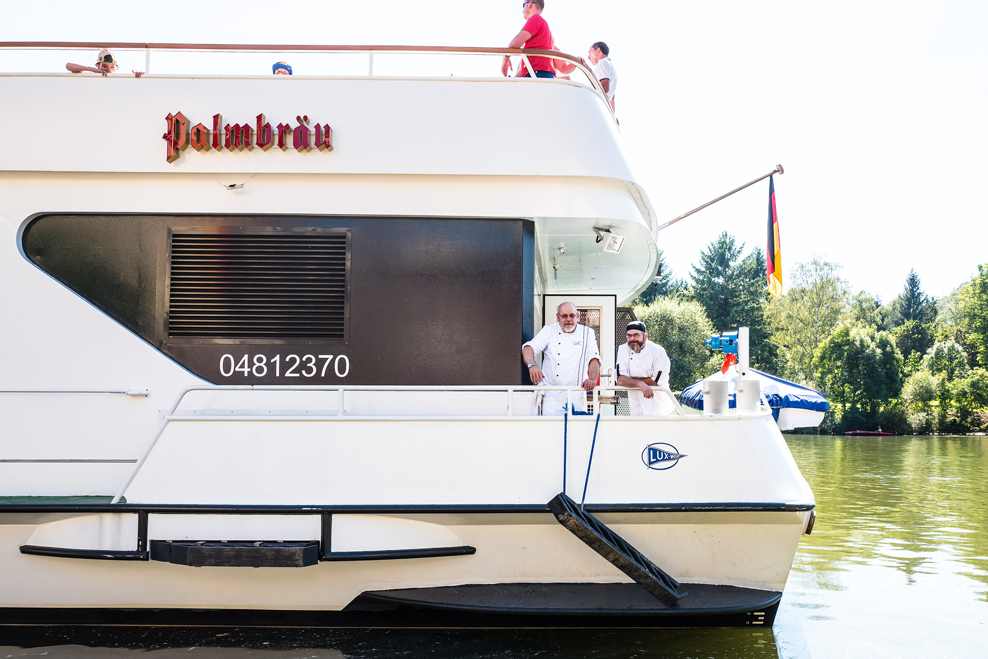 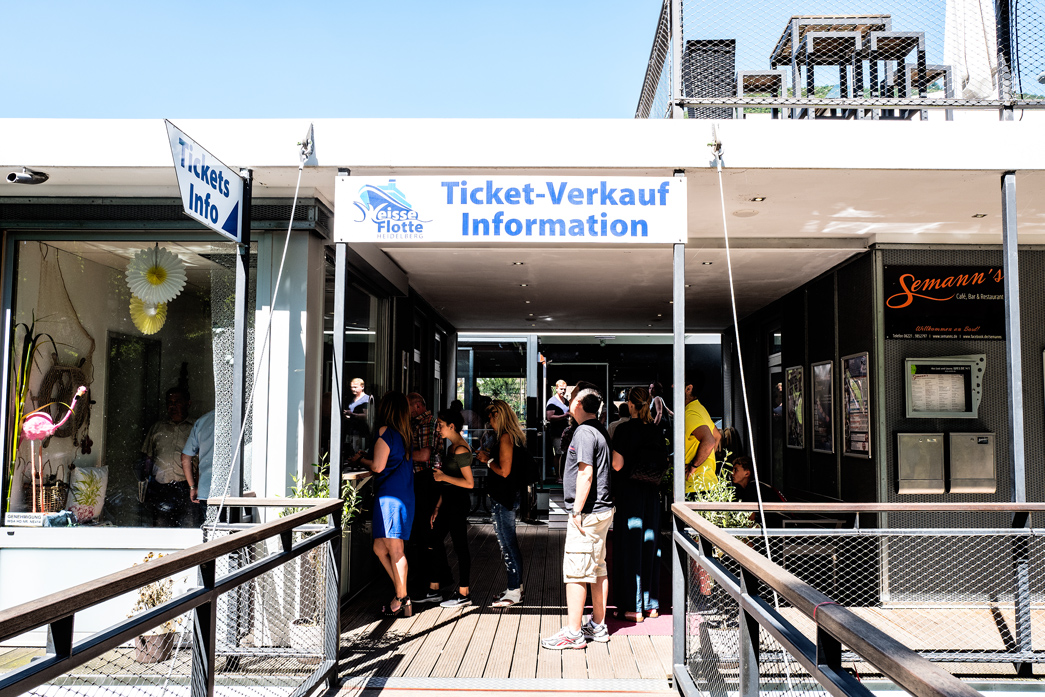 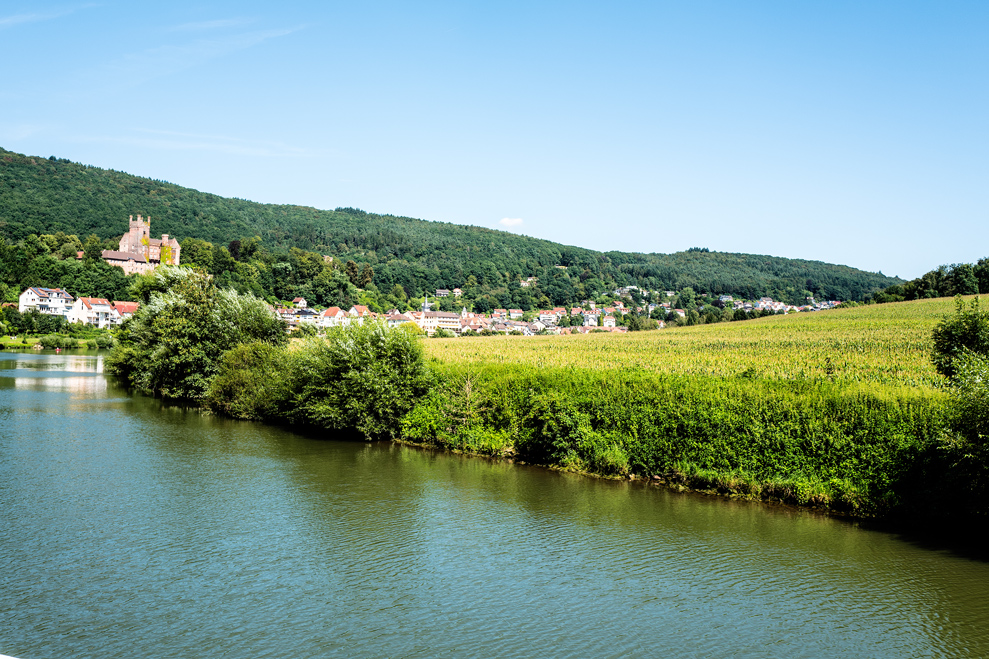 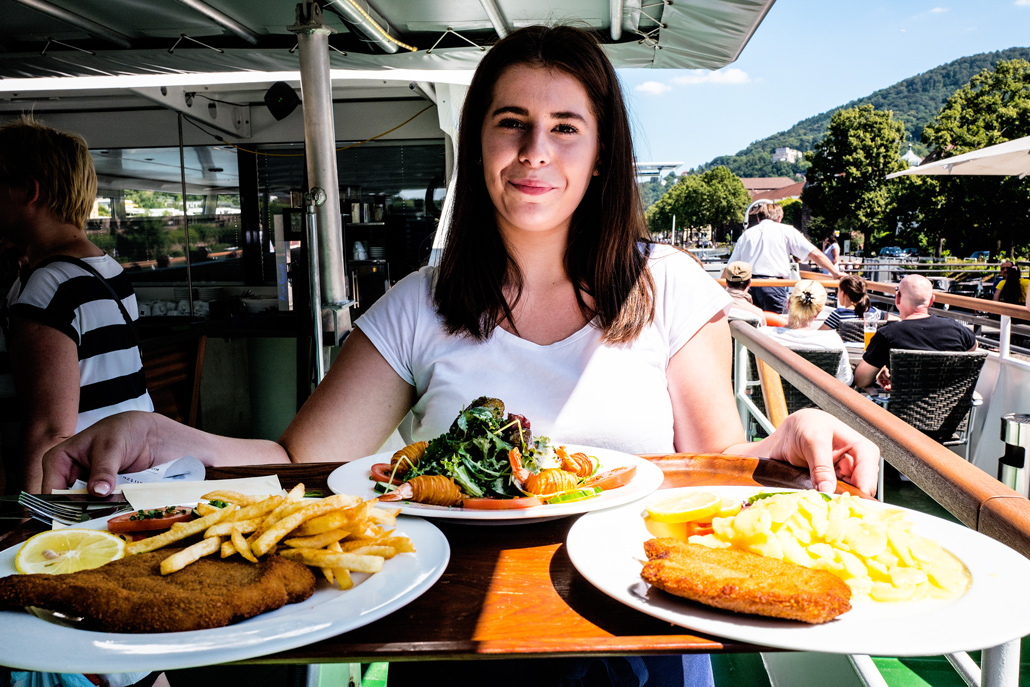 “We don’t just navigate the waters, selling hotdogs,” the captain tells us. After 26 years of navigating Europe’s rivers with Silvia in the hotel ship “Liberté” they now have grander visions of the “Weisse Flotte” bringing culture to the rivers, while continuing to offer the classic tourist trips.

“Back then we thought our lives would calm down a bit”

It was seven years ago that the Hofstätters and other entrepreneurs decided to acquire and reposition the “Rhein-Neckar-Fahrgastschifffahrt” (“Rhein-Neckar Passenger Shipping company”). “Back then we thought our lives would calm down a bit,” Silke says, recalling the beginning of “Weisse Flotte.” Soon, however, it became obvious that a wide range of expenditures were necessary to launch the venture, including modifying and renovating the entire fleet. The apex of the work was building the fleet’s brand new flagship, the “Königin Silvia.” With six ships and the ferry “Liselotte von der Pfalz” (“Liselotte from the Palatinate”), “Weisse Flotte” is one of the largest fleets in southwestern Germany.

Even under deck you have a great view.

The massive sundeck on board the “Königin Silvia” has ample space for sun lounging chairs and a covered bar, as well as a small stage for a wide array of cultural events, everything from plays, balls, clubbing, comedy acts and cabaret to classical concerts, which all turn a normal cruise into a cultural event.

Silke primarily handles the gastronomical and organizational aspects aboard the ship, both of which require a great deal of thick skin and cunning—and a love of water of course. Just like her husband, she fawns over the one-of-a-kind atmosphere on the river. “I find it incredibly moving, when we’re gliding across the water. Every place, every forest takes on fascinating new dimensions from the water that remain hidden when ashore,” she says.

In the captain’s room of the “Königin Silvia,” Karl stands at the helm, adeptly manoeuvring his ship through the oncoming freighters. He wears a white shirt with blue epaulets and four shiny stripes which identify him as captain. While the passengers enjoy the relaxing trip and culture programme on board, he remains focused, keeping watch over his ship. Only on rare occurrences is he able to mingle with his guests briefly—for example when the Benedictine monks board the ship on the excursion to Neuburg Abbey.

“Königin Silvia”, with over 600 passengers the largest passenger ship on the Neckar.

Karl is a man of action. When he was a student, he purchased a ship with a friend to take tourists out on the water when university was not in session. From his home port of Neckargemünd, he amassed years of experience with the hotel ship. Navigating the 3.5 million luxury ship across the Neckar and through the water gates made him a seasoned and apt captain. “Königin Silvia” is not easy to guide,” he says. The ship only left the Monheimer Lux wharf at the beginning of the year, while its two diesel motors with 500 horsepower and room for 600 passengers make it the largest passenger ship that the Neckar has ever seen.

Weisse Flotte and its 70 employees would like to offer more theme trips during future off-seasons. Reservations have already been made for after-work parties, dance parties and jazz and rock concerts. This winter, there will be excursions to the Christmas markets in Neuburg Abbey, Ladenburg and Bad Wimpfen, as well as murder mysteries on board and musical dinners. “We want to give our guests the experience of a short cruise all year round,” says Hofstätter. “A cultural cruise through our homeland.”