You find one of the last craftwork bookbinderies in the Rhine-Neckar region in Neckarstadt, a part of Mannheim. Annette Schrimpf is the fourth generation to run the bindery. This is a story about the love for a profession that is dying out—and about a very special house.

Annette Schrimpf positions the needle with great care. She sticks it through the leaf and pulls the thread through. Her movements are skilful—quick but never hasty. Movements that she has mastered over the course of decades. She learned the trade from her father Rudolf, who learned it from his father and grandfather.

Annette takes the next double page and attaches it in the same way. She stitches the thread crosswise, applying the French cross-stitch. A method for enthusiasts. Later she will apply some glue as well. The black thread of the emerging cross-shape pattern will remain visible. She is the fourth generation of her family to practise and pass on this visible craftwork. The workshop in Mannheim Neckarstadt has been there for more than 100 years. Friedrich Schrimpf, Annette’s great-grandfather once opened the bookbinding workshop a few metres further down in another building, at Waldhofstraße 14. He did so in 1913, even earlier than the family, who dated the opening to 1915, had long thought.

Annette takes out old photographs. They show the old workshop and how many generations work in it together. Her father is depicted there as well. And a school friend of his, who liked coming to the workshop a lot. All of them were involved: grandma, an aunt, a great-aunt. Annette remembers her grandfather fondly. How he used to work with the tools she has in her workshop until today. “We always stole his sandwiches.” He understood the joke. “My grandpa was great, a man with a real sense of fun.” 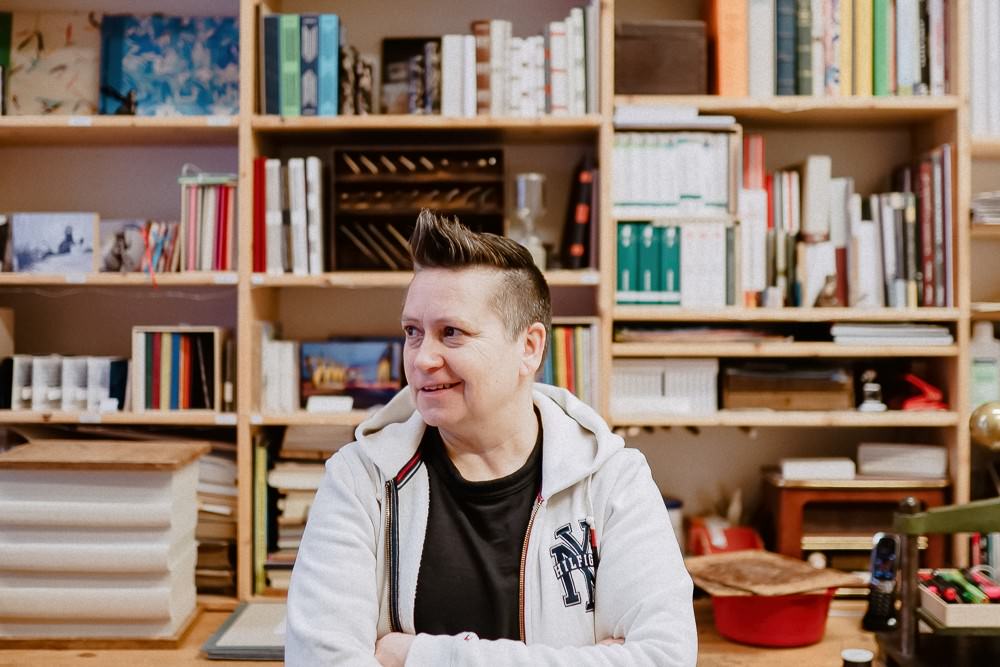 Annette Schrimpf is the fourth generation to run the bindery.. 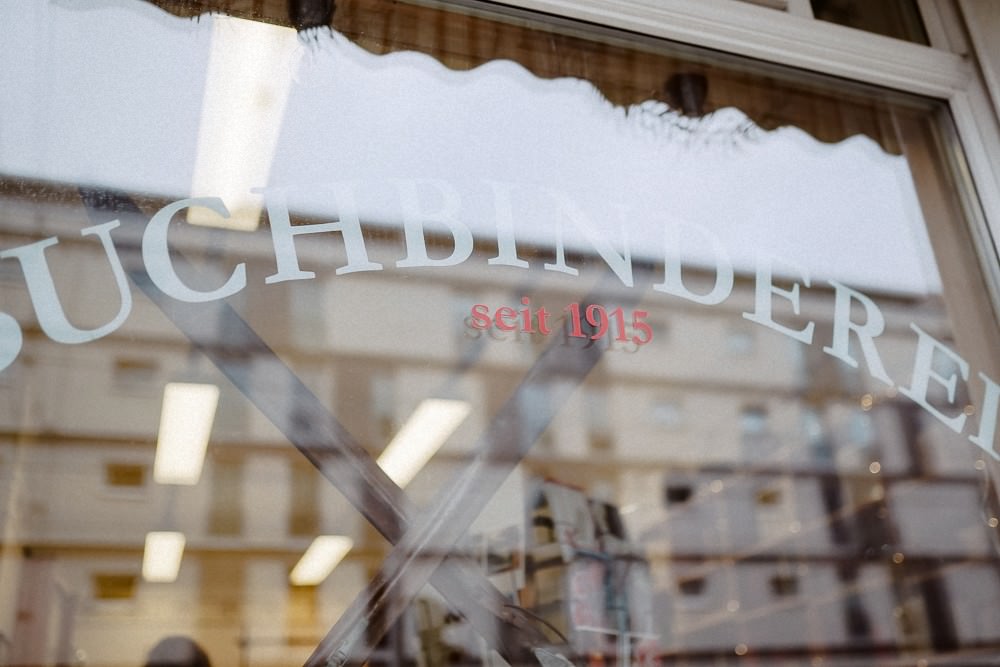 When her great-grandfather founded the business, … 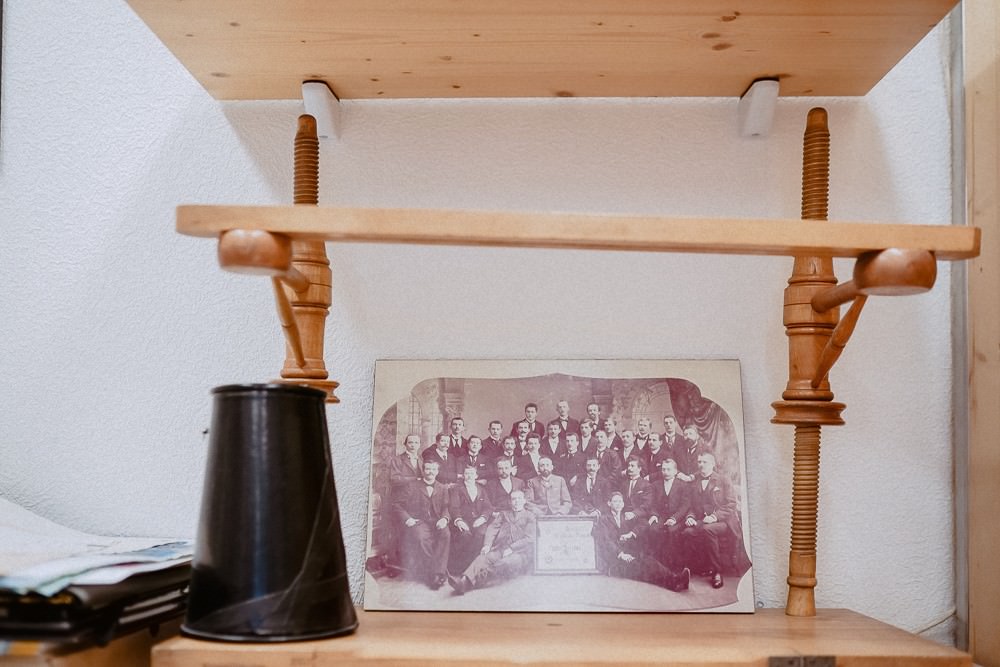 …bookbinding used to be a very common profession. 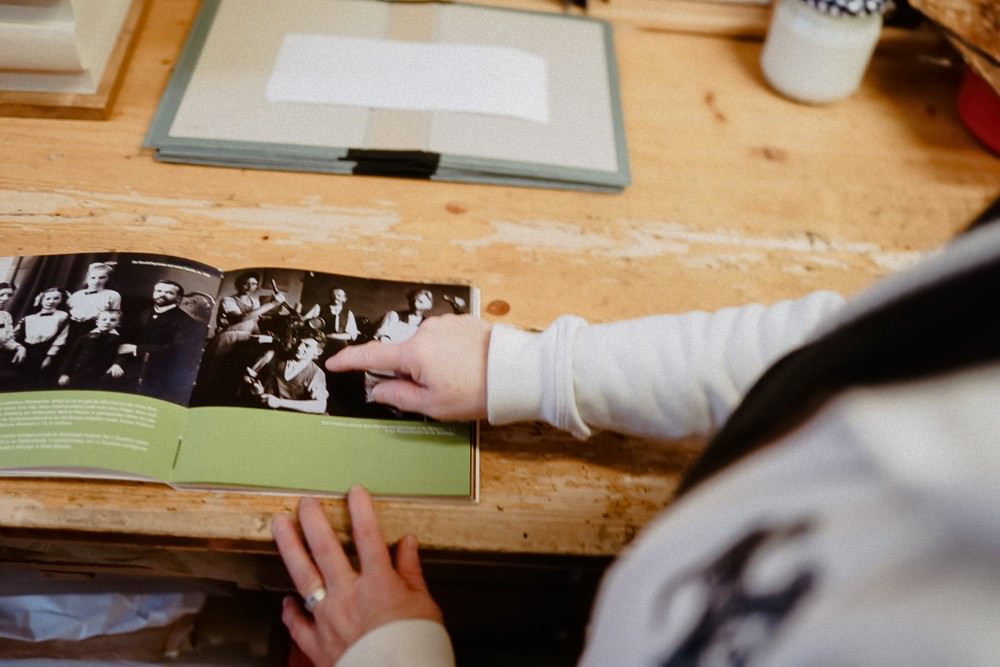 The trade has been passed on in the family from one generation to another. 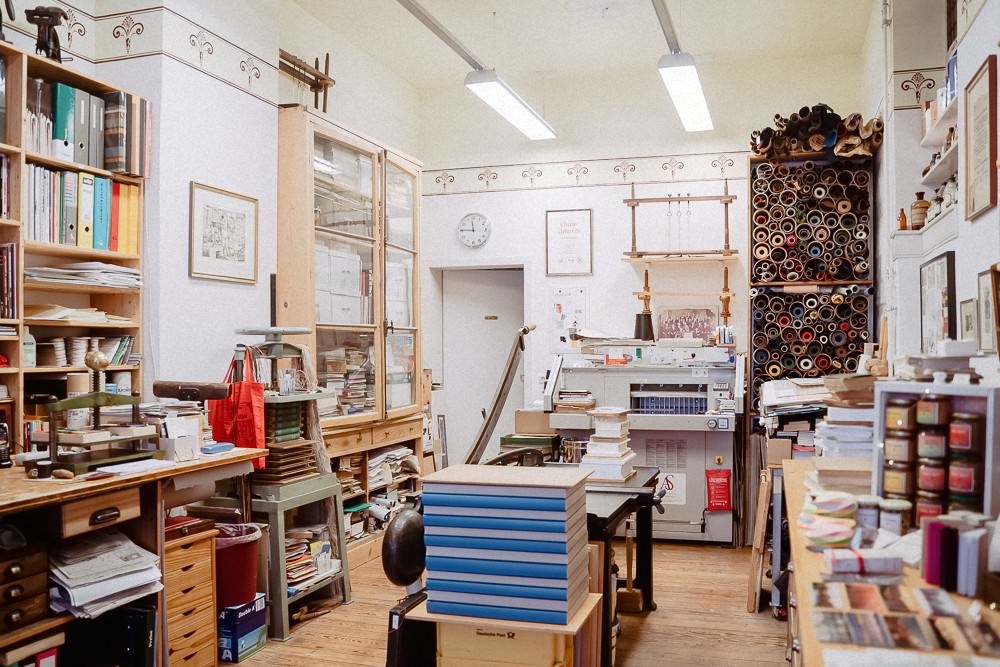 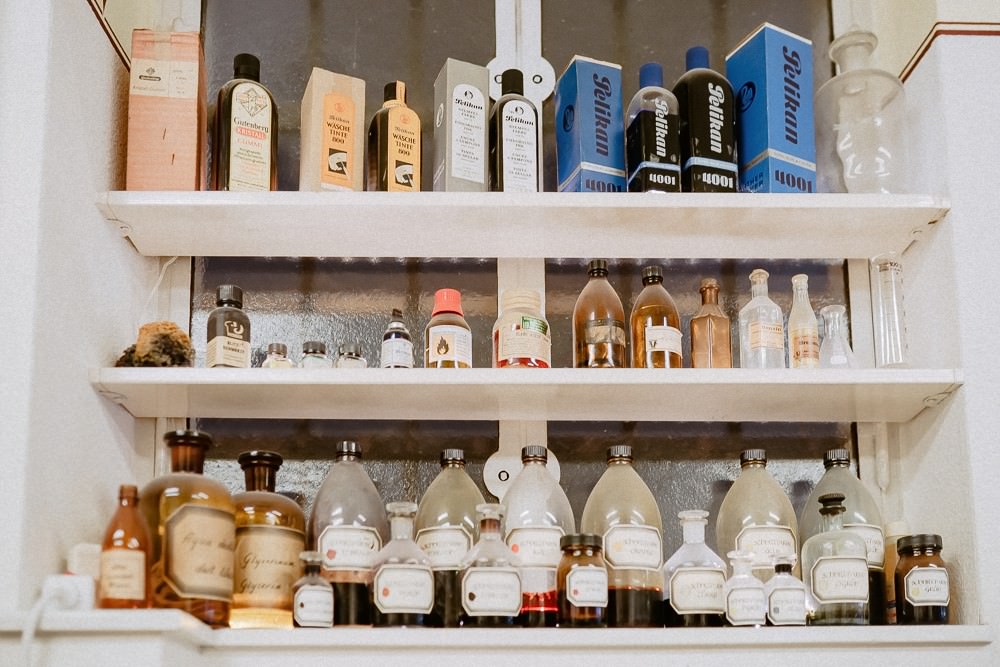 However, the past was given an important place. 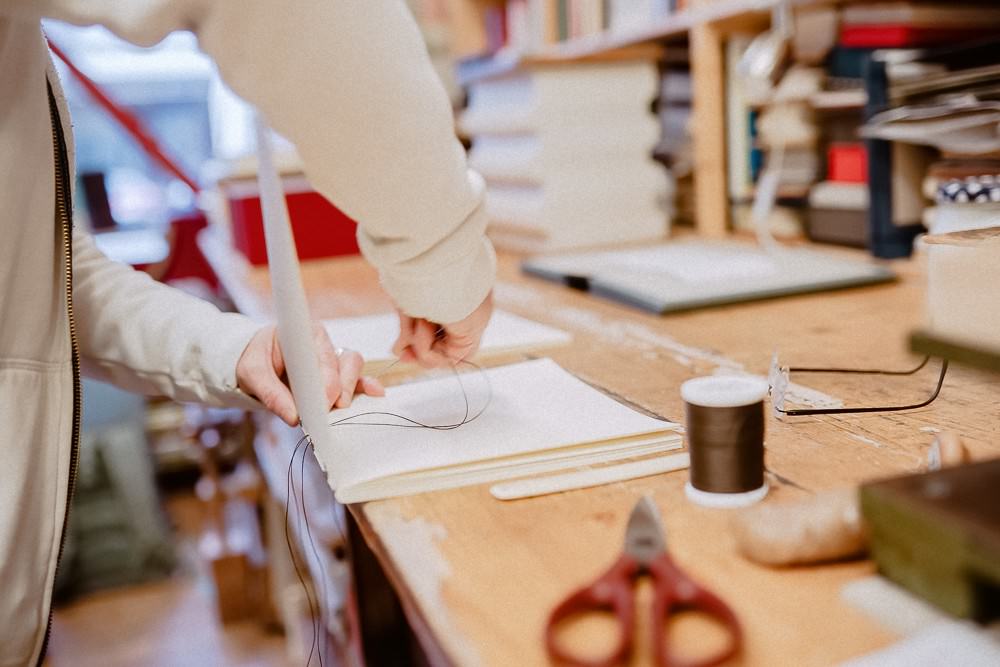 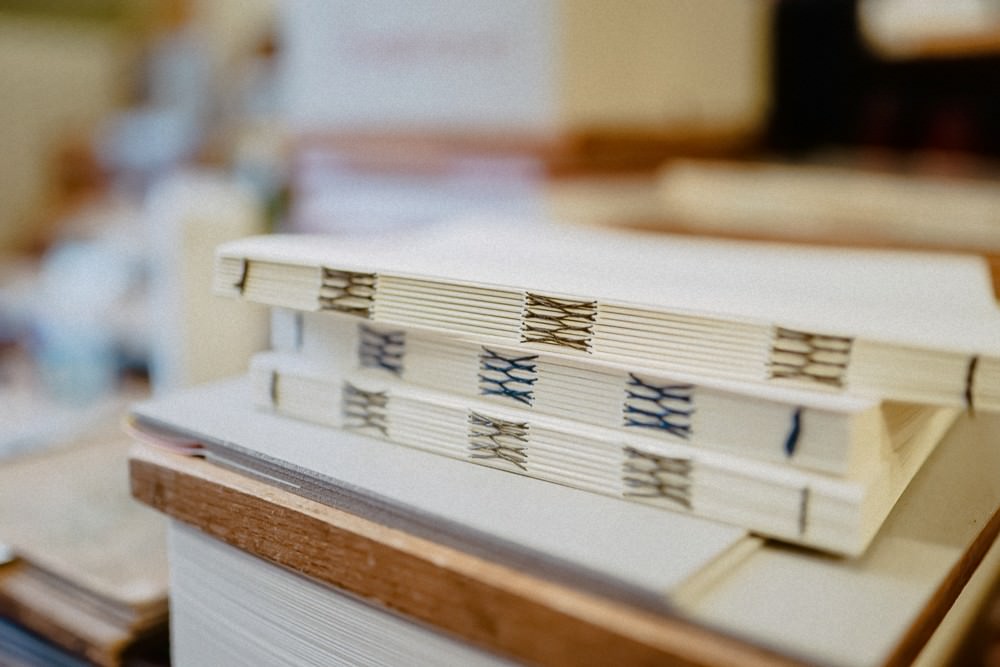 Thanks to her great-aunt Emilie, the family business survived the years of the war. She always believed that her brother would return from the war one day. “Even though he was considered missing for a long time.” She sublet the rooms to keep the workshop. And she took care to preserve the interior the way it was until Friedrich Schrimpf (jr.) reopened the shop indeed. The facilities also included a stationary shop until the 1960s. “For a long time, people returned here and told me how they used to buy their exercise books from my great-aunt,” the bookbinder says. “Everybody in the neighbourhood knew her.”

Actually, I can’t think of anything I like better than bookbindung

Annette grew up in the shop and with the trade. “I never questioned it: I always knew that I’d take over the business one day.” Have no alternative career aspirations come to her mind? She is thinking for a moment. “Actually, I can’t think of anything I like better than bookbinding.” She loves working with paper. And she loves passing her knowledge on to others—in university seminars at the department of design of Darmstadt University of Applied Sciences or in workshops in her own rooms. “Attendees of my workshops look for a recreational change—people, who spend the entire day working on the computer, or trades people who have given up their jobs and miss out on working with their hands.” Many of them keep coming back. “Holding in your hands a thing that you have created yourself feels quite different from moving computer files from A to B every day.” And Annette always takes something away from the workshops as well. “Amateurs approach the task differently. And it is always helpful to be confronted with a fresh perspective on the matter—after so many years that I have exercised the profession.”

Teaching and workshops have become important pillars for her. “It has long become impossible for me to make a living just repairing books or producing special editions.” She turned the bookbinding shop inside out after she overtook it in 2001. The stockroom was moved to the back room, the workshop to the front. She resuscitated the retail shop and established a stationery section. “The bookbinding business had practically been invisible—clients had to enter the shop from the courtyard.” Today, they come in and find themselves right in the middle of the trade on creaking floorboards, between reams of paper and books of all kinds of forms and colours, old equipment and historical photos.

Most of Annette’s customer’s are regulars. They bring books of fairytales, old Bibles or their grandma’s cookbook—often dog-eared. And she repairs them. Sometimes she has to fully disassemble and carefully reassemble them to do so. “I work on them as little as possible and as much as is necessary.” The bookbinder takes care to preserve the character of the old treasures. It helps that she works in a longstanding business. “Many of the papers and materials I have in store aren’t even available anywhere anymore.” Annette creates special editions, too. Such as the Golden Book of the City of Mannheim.

She is deeply rooted in her town and her neighbourhood. The Neckarstadt district is diverse and vibrant: The Capitol and Alte Feuerwache cultural centres are not far from the bookbinding shop; there are lots of cafés; and at the bank of the Neckar river, the Einraumhaus für junge Kunst (one-room house for young arts) and the Alter recreational project bring together people from all walks of life and various cultures. However, there is one place that is of particular meaning to Annette: the edifice at number 8 Waldhofstraße, a Historicism-style building with oriels and ornamentation. For this is where her workshop is and where her parents and her aunt live. And she will return to live here soon as well—at the hub of her family’s life. This place was at risk in 2019: The building was meant to be sold. Most likely to investors who would probably redevelop the building and drastically increase rents in the light of rising housing prices, as the residents feared. The small business wouldn’t have been able to afford that. Moving out was not an option for Annette. “A great part of my equipment is so old that I couldn’t install it elsewhere.”

So she began fighting. For her building, for her shop and for all the residents to be able to stay. In the end, they found a foundation that bought a part of it. The residents’ community founded an association and later a limited liability company and finally accumulated enough money to buy the building through small loans, flea markets and donations. “It was a hard time,” Annette remembers. Many tasks in her bookbinding shop had to go on hold at that time. “But it was well worth it.” Since then, the building community meet once a week. They fix, redevelop, and plan things together. And they celebrate together, too. Soon they will be able to do so in the newly renovated common room.

Annette points to a photo that hangs on the rear wall, framed by an old wooden device that serves to fix threads for the binding work. The picture shows about 40 men in fine suits. It is a group photo showing the bookbinders from Mannheim including Friedrich Schrimpf. His great-granddaughter has only one colleague in town. And this colleague has already gone into retirement. She doesn’t know what will happen to the workshop in the future. “No one from the family will take over the business, I think,” she says. There will be no fifth generation in Neckarstadt. But for now, she doesn’t want to brood over that much. “There is still some time to go! I want to be doing this for another 20 years at least,” because she continues to be happy with her profession. “What’s more, I don’t even feel like having learned everything I need to. There are many things left that I still want to try out and do and study.” She wants to be a bookbinder as long as she can, “because it is just the most beautiful profession in the world!” 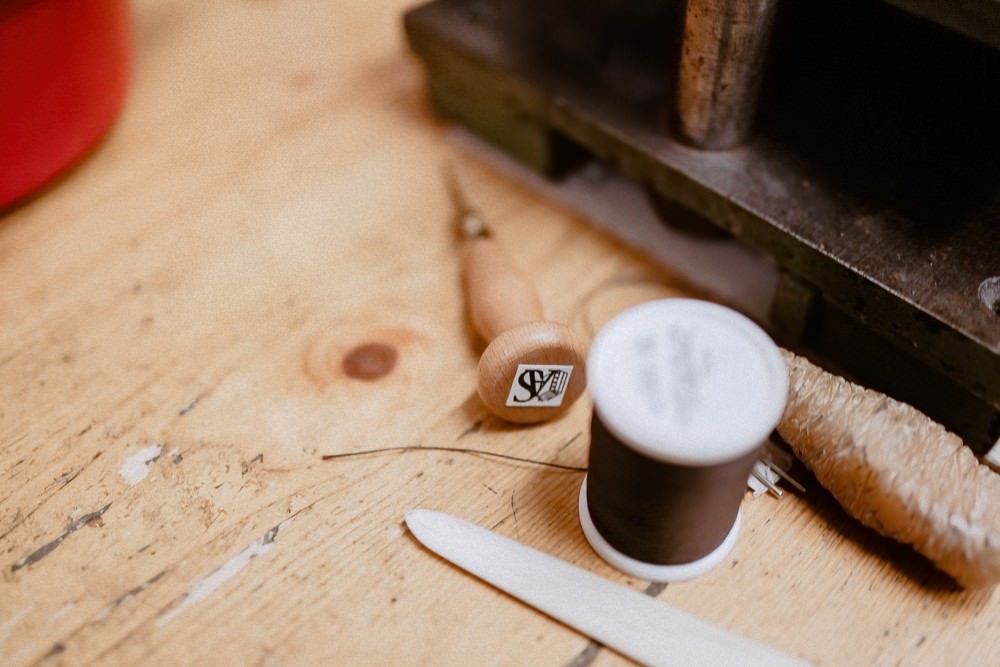 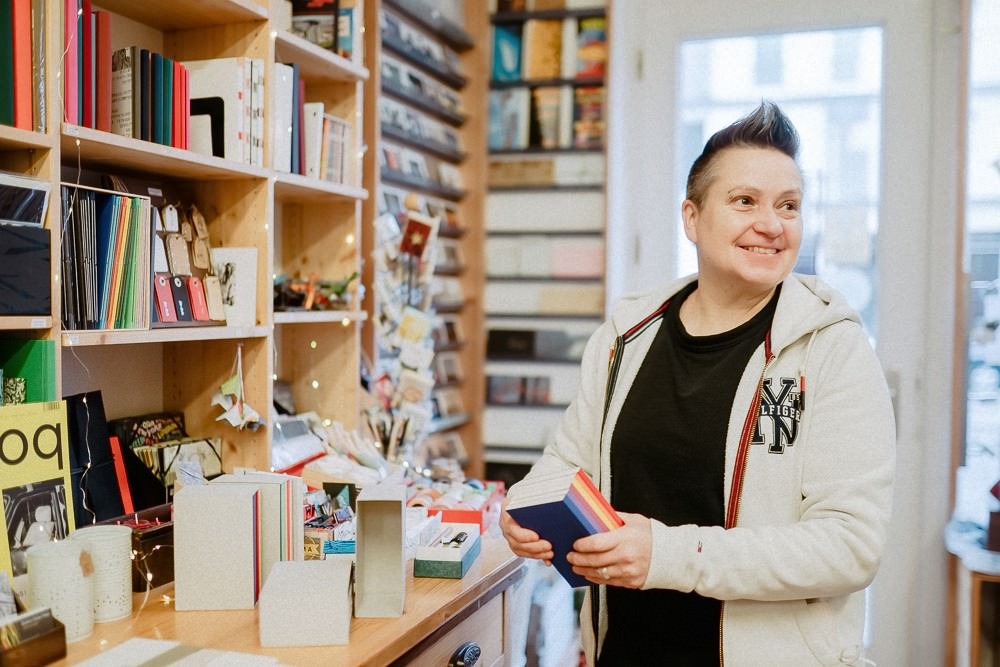 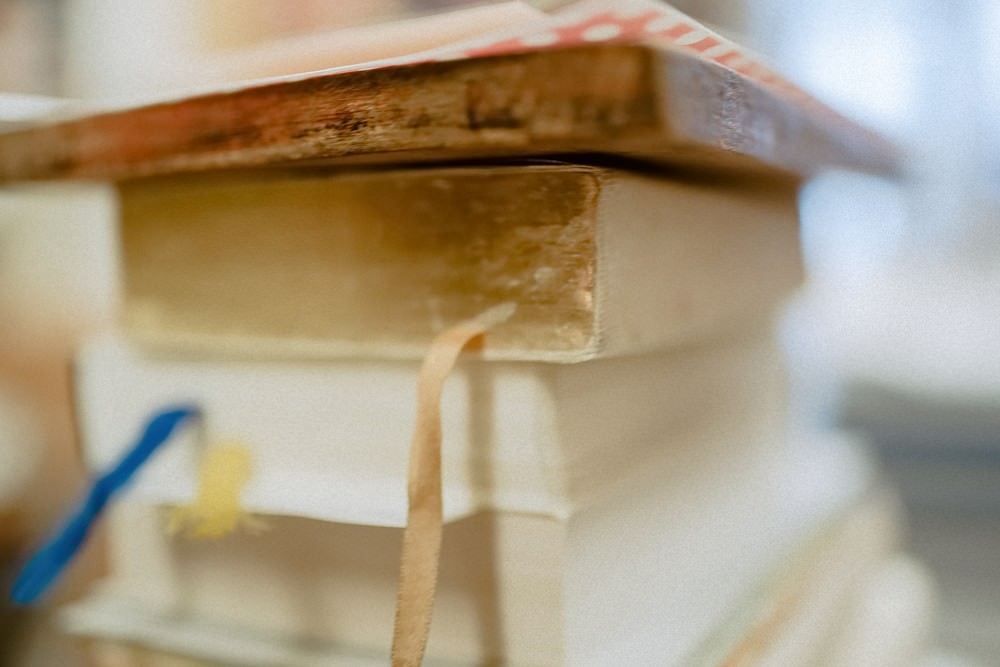 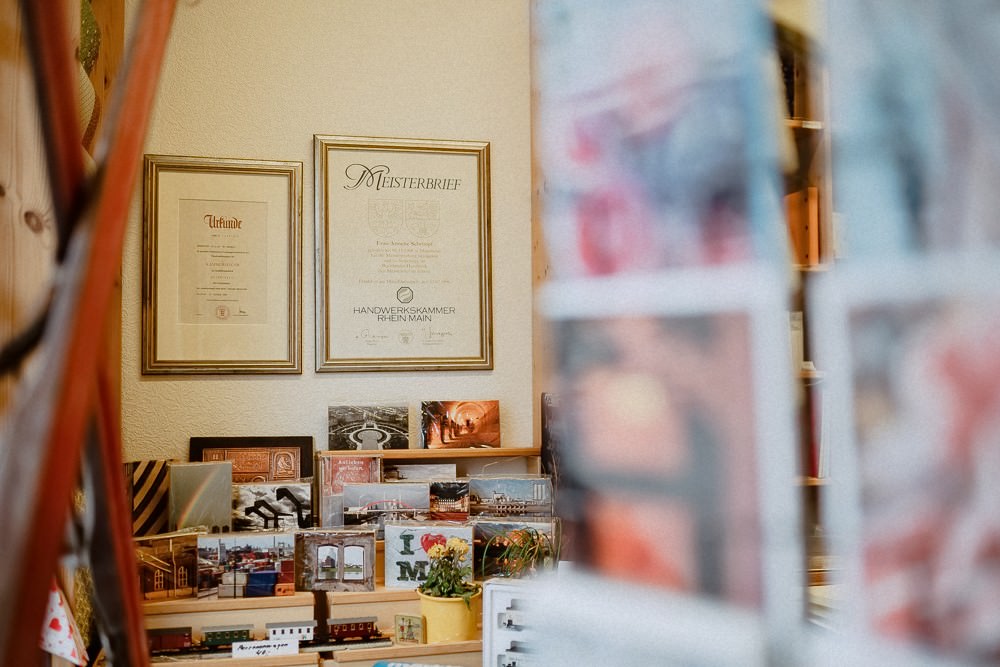 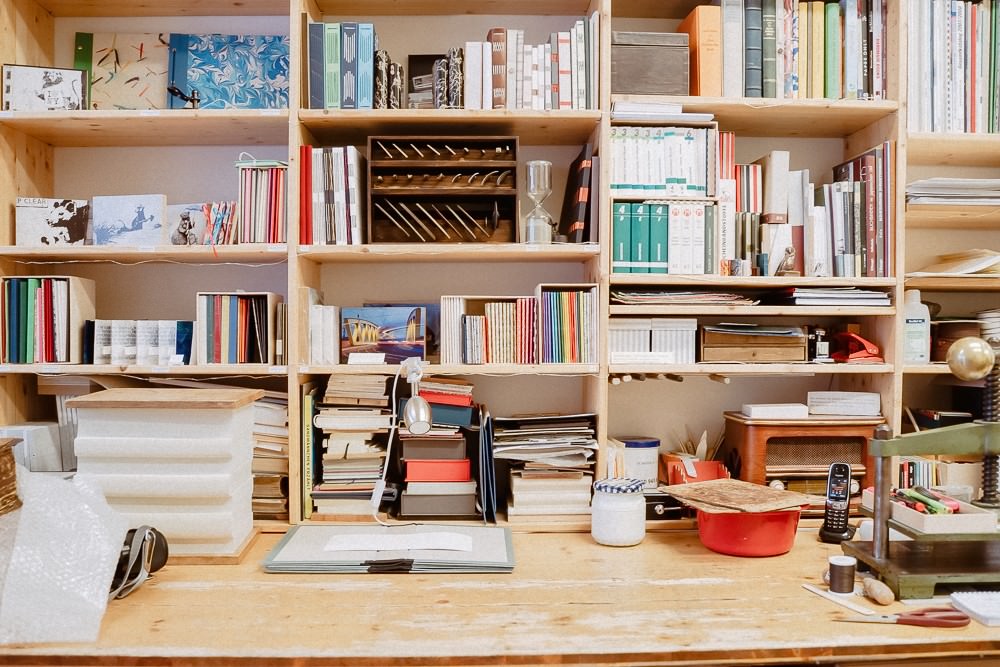 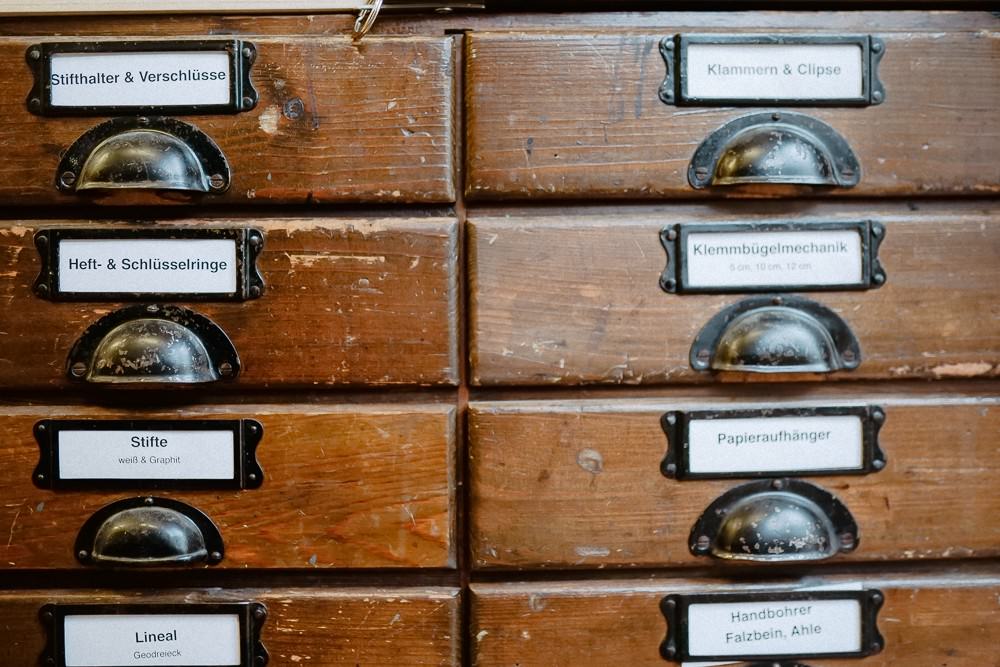 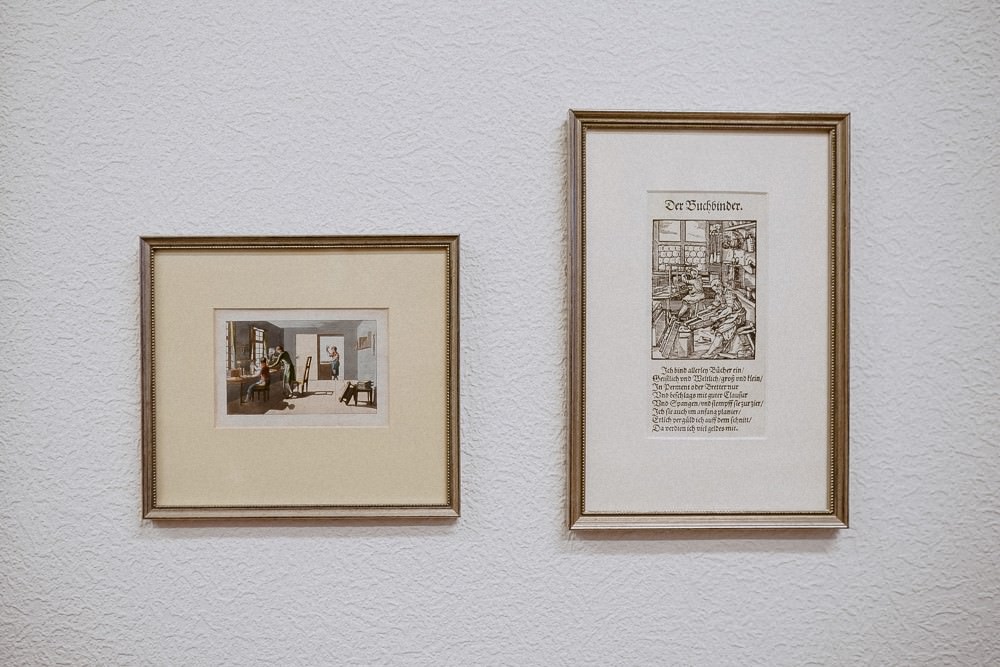 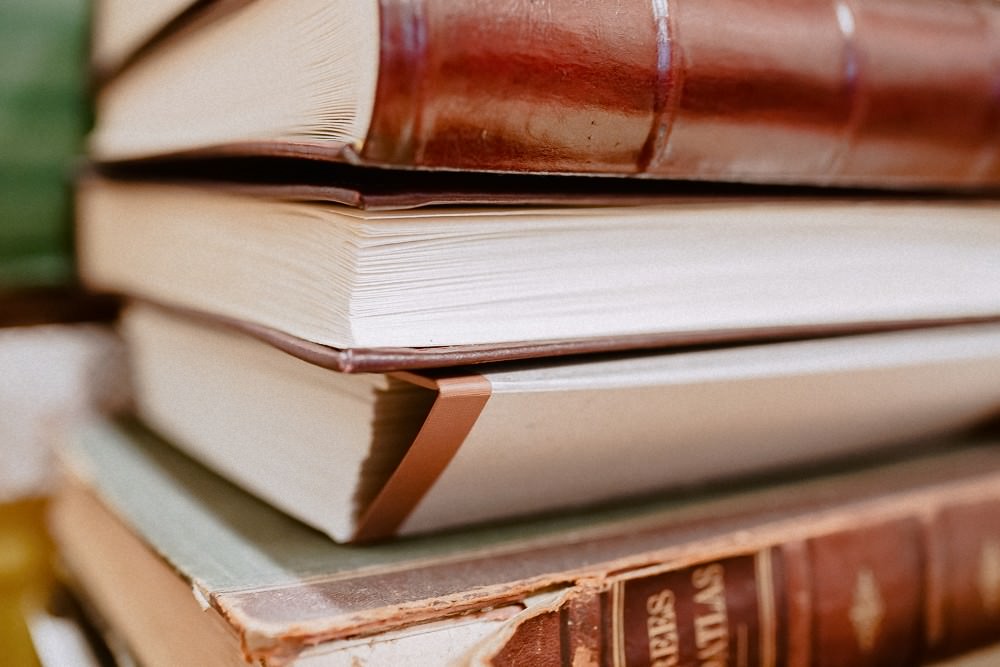