The career of the young Palatinate star chef Benjamin Peifer started when he, still a boy then, considered optimizing his mother’s pancake. He started off as a baker in the tranquil Palatinate lowland village named Weingarten.

After a selection of four delightful “amuse-bouches” you are served a scoop of beurre noisette beaten with sea salt and a little basket in the gourmet restaurant “Urgestein” (meaning primary rocks) in Neustadt, thus encountering the young master chef’s origins: bread. An entire course is dedicated to it, “because bread is no matter of course”. Benjamin Peifer has been refining the precious object for one and a half years. “We want to meet local tradition. So, put in a bit of caraway seed and so on…”

“And so on” is not quite what satisfies curious guests – they insist on getting the recipe. But they don’t manage to glean more than the home-made sourdough starter and ancient grain types, such as emmer wheat, einkorn wheat and quinoa that are used in the dough. The result is sensational. You will eat this bread as if you were tasting it for the first time in your life.

Sharp: At only 26 years of age, Benjamin Peifer has already achieved his first star and has redefined Palatinate cuisine.

The courtyard of the building “Steinhäuser Hof”, located not far from the market square in Neustadt, takes the visitor into a scenery similar to that of Wagner’s opera “The Master-Singers of Nuremberg” – half-timbering, protruding oriels, and carved galleries. And one of the most renowned Palatinate gourmet restaurants, the “Urgestein”, stands in the background of this arrangement. The charisma of the locality unfolds through its architecture and interior, which is of simple elegance: leather armchairs under a cross vault ceiling made of clinker brick masonry.

”We offer a variety of seventeen individual dishes,” patron Hanno Rink tells us. He left the catering department of the casino “Spielbank Bad Neuenahr” behind him and moved to the Palatinate region together with his wife Hedi a good 15 years ago in order to take over the “Steinhäuser Hof”. Today, the guests come from the region and well beyond, including from Berlin, Belgium, Holland and from Switzerland to savour the culinary delight here. 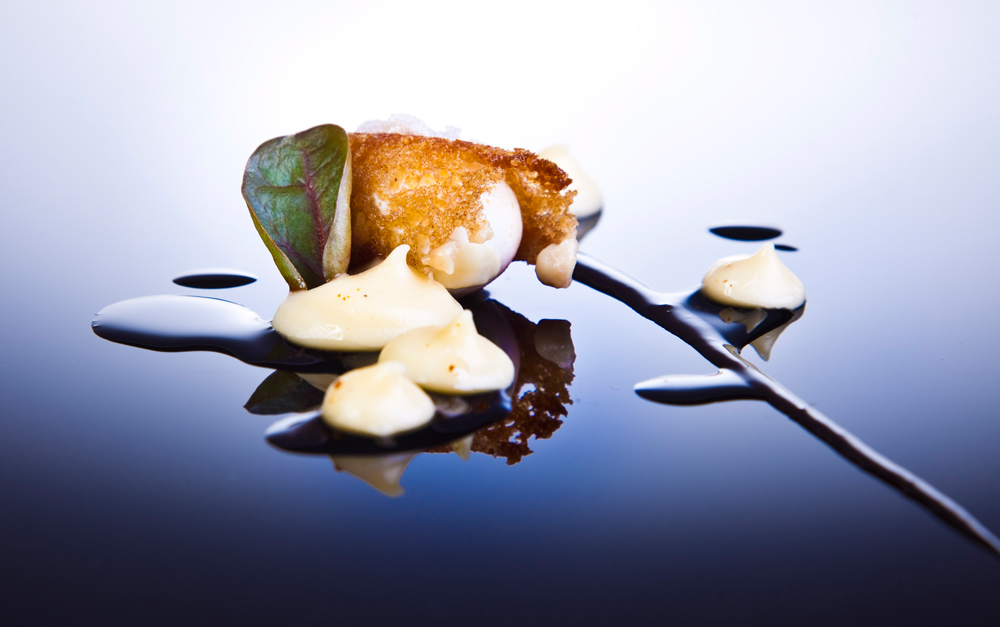 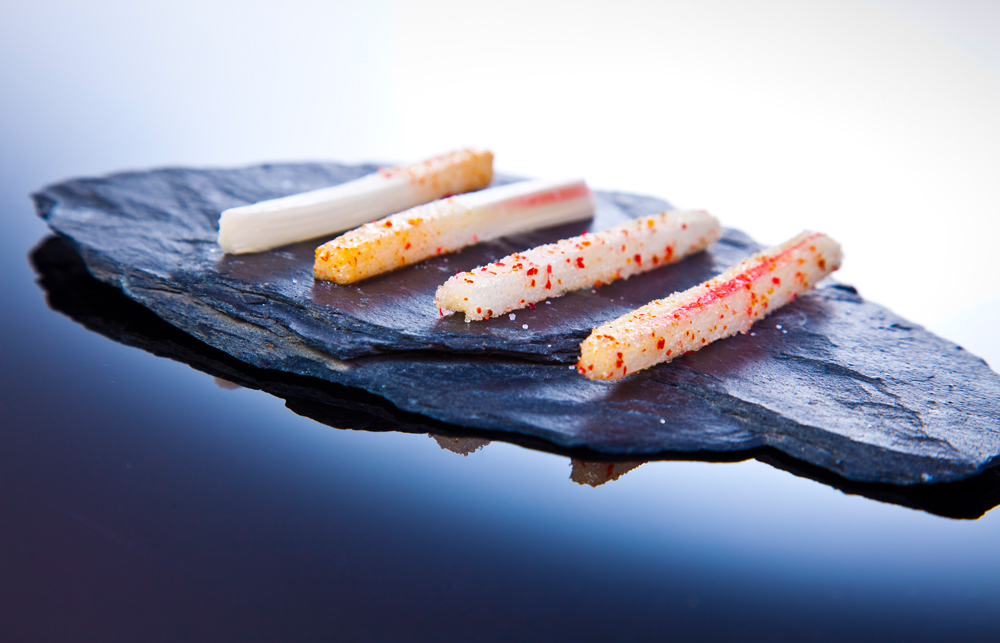 The menu starts with “Gequellde mit weißem Kees”. In fact, this Palatinate dialectal name refers to a dish consisting of potato crisp, curd cheese and paprika. Sounds absolute haute cuisine, right? This is a homage to the Palatinate region, as is the next appetiser: Dominik Hans’s “Elmsteiner Forelle” (trout from the town of Elmstein). The third “amuse bouche” is of the same origin again: “Pälzer Gold” (Palatinate gold) – confit potato and essence, onion cream and brown butter. And Elmstein again: a fish and chips version with charr, “an outrageous, local variation,” says the master chef.

Wonderfully well with this goes the fact that a skilful neighbour, Ms Ingrid Zinkgraf, designed all the crockery for the restaurant. And how about wines? “We are probably about the only star-awarded restaurant in the world that offers an exclusively Palatinate variety of wines,“ Hanno Rink tells us. The wine-cellar is stocked with wines from outstanding wine-growers such as “Müller-Catoir” or “von Buhl” but also with lesser-known ones. It is amazing what is possible, if you interpret the notion of regionalism in a meaningful way. This may be the element that altogether made the Michelin Guides award the restaurant “Urgestein” a star.

Benjamin Peifer – a wonderful Palatinate career as a chef

Benjamin Peifer was trained at a country inn in the town of Hassloch and then began his liaison with the haute cuisine at the hotel and restaurant “Ketschauer Hof” in the town of Deidesheim. He staked out his frontiers in the guesthouse “GästeHaus Klaus Erfort” in the city of Saarbrücken. “I was trained there for three-star cooking, but it’s not quite my speciality.” He learnt about regional-oriented cooking from Jean-Philippe Aiguer at the “Hofgut Ruppertsberg” farmstead. And at the “Paulinerhof” establishment, close to the city of Trier, he was awarded his first prizes: “Sieben Pfannen” (seven pans) from the magazine “Gusto” for the chef! At only twenty-three years of age.

Hedi Rink, sous-chef at the “Urgestein” – only the best ingredients make it into her kitchen.

“Steinhäuser Hof” owner Hanno Rink’s decision for the “Urgestein” was a decision for the unpredictable. “At the beginning, we didn’t know where the journey would take us. Benjamin is an exception – none of those chefs who do their work in order to earn money only.”

Products are selected resolutely. For example, from the organic farmer Martin Braun in the town of Zeiskam. “This fellow is likewise an odd person,” Peifer praises him in his very own manner. “He is the kind of guy that rings you at three in the morning, because of a new idea – about the application of salsify…” Meat has no leading role in the “Urgestein”. Star chef Peifer rather uses it to season the meal – what a shift in culinary paradigms. If roe venison from the Hambacher Schlossberg (Hambach Castle mountain) is served, then in portions of no more than 40 to 60 grams…

The semi-wild ducks and Mangalica pigs delivery comes from the town of Zweibrücken. Peifer calls a course that is made of air-dried pork belly, cooked with a paprika glazing “Erinnerungen an Denia” (memories of Denia). And here we enter fantasyland: the vegetarian four course menu named “Grundstein” (foundation stone), the five course menu “Urvertrauen” (basic trust), and the six course menu “Meilenstein” (milestone). You will always remember this experience and, as a part of it, the ray wings in Vadouvan butter, glazed with lentils and pointed cabbage, and also the cake “Bienenstich Intense 2.0.”

Today, you need to book well in advance if you want to get hold of a seat in the “Urgestein”. The single and double rooms are equipped with carefully chosen furnishing and they provide the base for a gourmet weekend in Neustadt, so you can comfortably lie down after feasting deliciously and promenading through the old town.

Inside the wine bar: “A couple of snacks to go with the wine – wicked and tasty!”

Besides, connoisseurs enjoy Rink’s “Jazz Club”. It shows virtuosos and rhythms from around the world. And there is another novelty: the “Urgestein Bar”, located in the oldest little house of the town, facing the alleyway. And here again, simplicity is king. “Our meals are meant to be no more than an accompaniment to the wine,” Benjamin Peifer explains modestly, “a couple of snacks, wicked and tasty.” Which means? “Home-made pancetta, for example, freshly sliced with the flywheel machine.” And what else? “Trout from the Palatinate Forest, but marinated like unagi and glazed.” The credo is: small meals, not satiating but happy-making. So much so that somebody might be tempted to sneak into the bar and pinch from the baker-cook’s bread. An act that should be forgiven tastefully.