Hape Kerkeling and Paulo Coelho themselves walked to Santiago de Compostela: making a pilgrimage is in. In Speyer, however, it has been an age-old thing to do. Who would know this better than Hans Ammerich, who searched the archives of the diocese for traces of the religious ramblers.

Some people have a favourite book, others have favourite movies or a favourite pullover. But a favourite certificate, of all things? Hans Ammerich is beaming all over, as a colleague hands him the simple, brown box from the cabinet in the archives. He reveals the document and the atmosphere in the plain functional building of the Diocese of Speyer becomes almost ceremonial. The former director of the archives discovered a document by Louis the Bavarian (1282-1347) that contains the ruler’s arrangements for the property of the so-called Stuhlbrüder brotherhood in Mutterstadt. With a smile, he deciphers the old, beautifully curved handwriting and examines the 700-year-old seal, which is still in a very good condition. “The devout men were here to pray for the spiritual welfare of the kings, emperors and empresses buried in the Cathedral,” Hans explains. In return, they were allocated landed property to live on its profit. 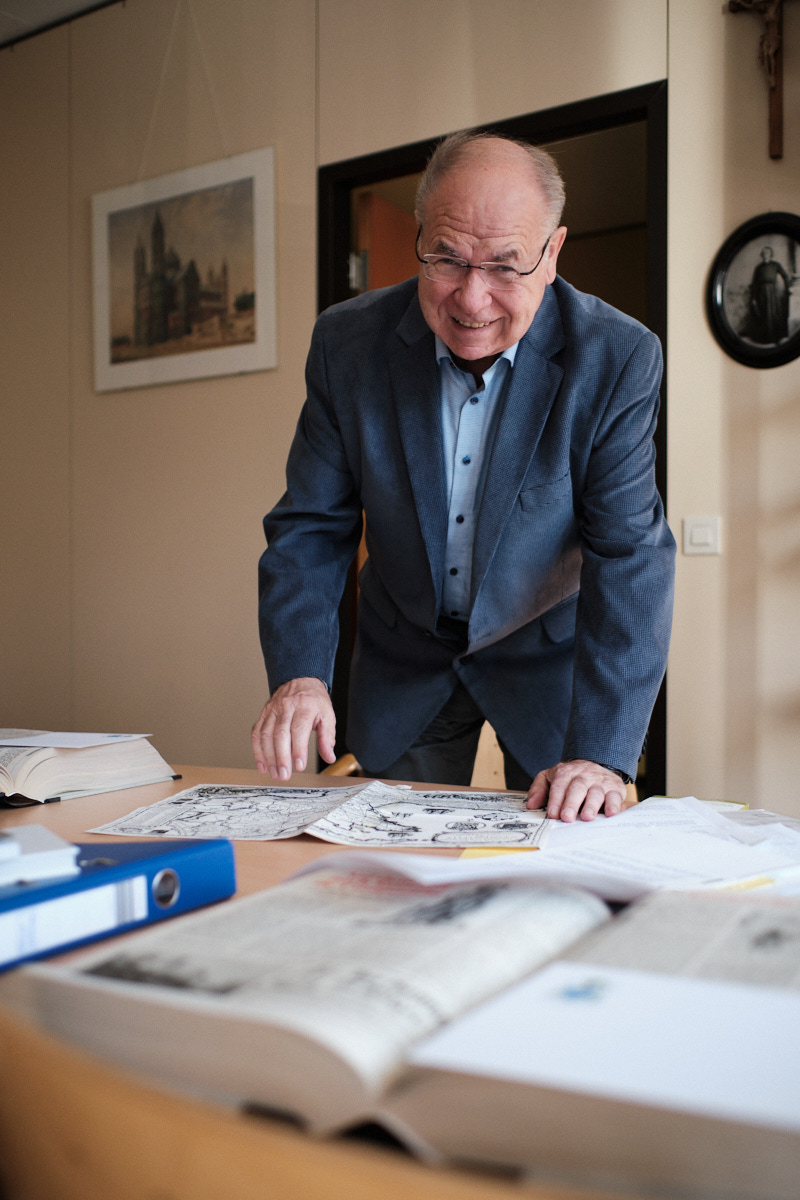 Passionate about being a historian: Hans Ammerich.

No doubt: the man is passionate about being a historian. His former work place, the archives of the Diocese of Speyer, is somewhat the Palatinate memory of the Catholic Church. Valuable parchment manuscripts are stored here, such as the ‘Speyerer Missale’ from 1343, parish registers and papal bulls as well as unpublished works, files and photographs. Hans was born in 1949 and managed the archives for 35 years. One of his research projects is the St. James pilgrims in the Palatinate. This subject had already been a trend subject when research into it began, some decades ago. It is a subject with an ongoing history, because some 300,000 people per year make a pilgrimage on the Way of St. James according to estimates by the pilgrims’ office in Santiago de Compostela. However, this number represents only the pilgrims on the Spanish part of the track. 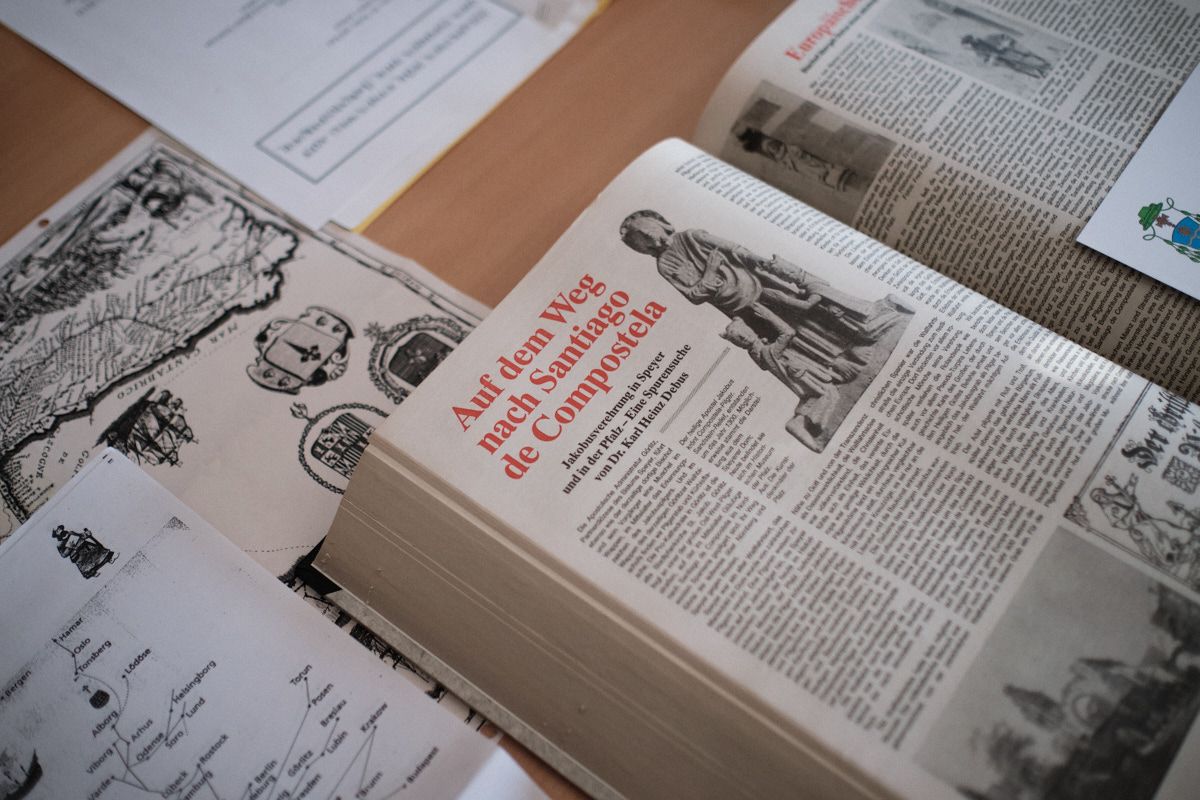 Hans has always known that the Palatinate has ever since been part of the Way of St. James: “The routes for trade and for the armed forces were well developed in this cross-border region and they were relatively safe.” Furthermore, the region has always offered castles, churches and monasteries one after another, which used to attract travellers seeking shelter, accommodation, food and spiritual places for contemplation and prayer. At the end of the 1990s, Hans started with his colleague Susanne Rieß-Stumm to trace the old tracks upon the request of the politician Rainer Rund and the then bishop Anton Schlembach. It was certainly helpful that the then district president Rainer Rund had been the long-standing head of the Pfälzerwald-Verein (Palatinate Forest club). Members of the club look after the tracks with their typical scallop shell markings. The scallop shell is the symbol for all St. James pilgrims and refers to the patron saint of all ramblers, James the Great. 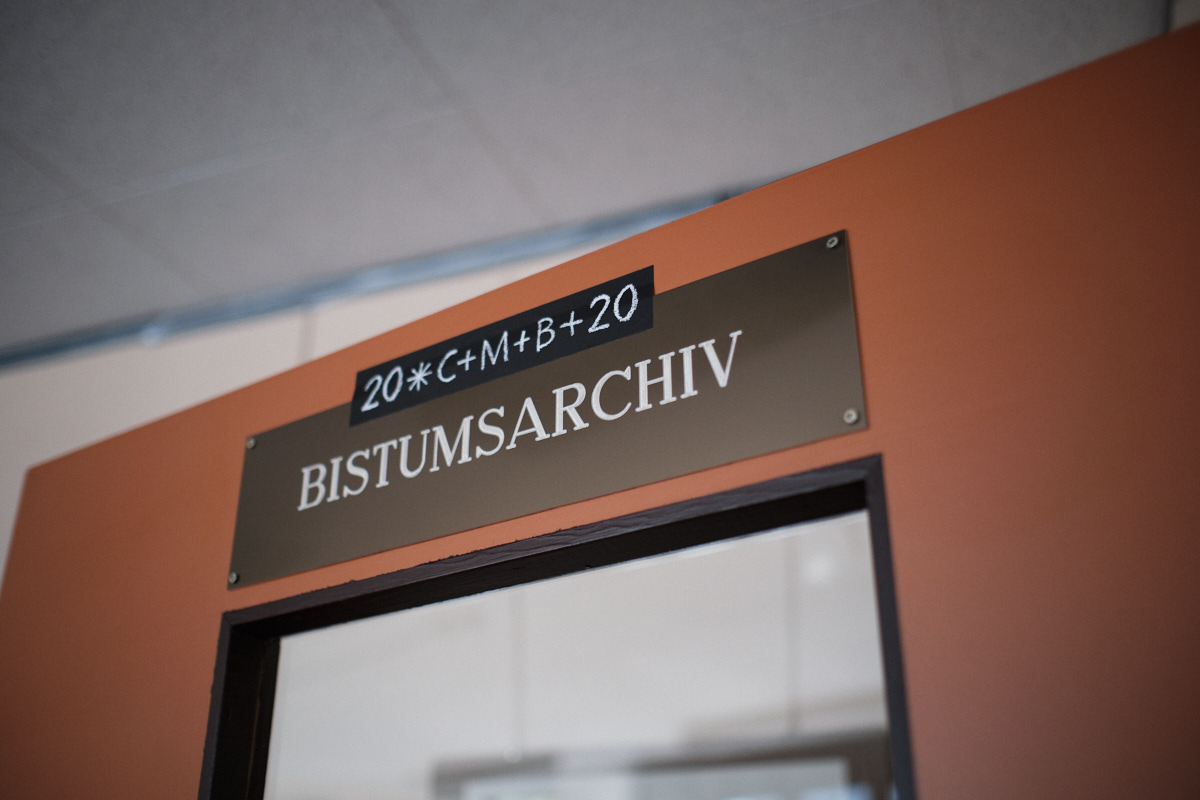 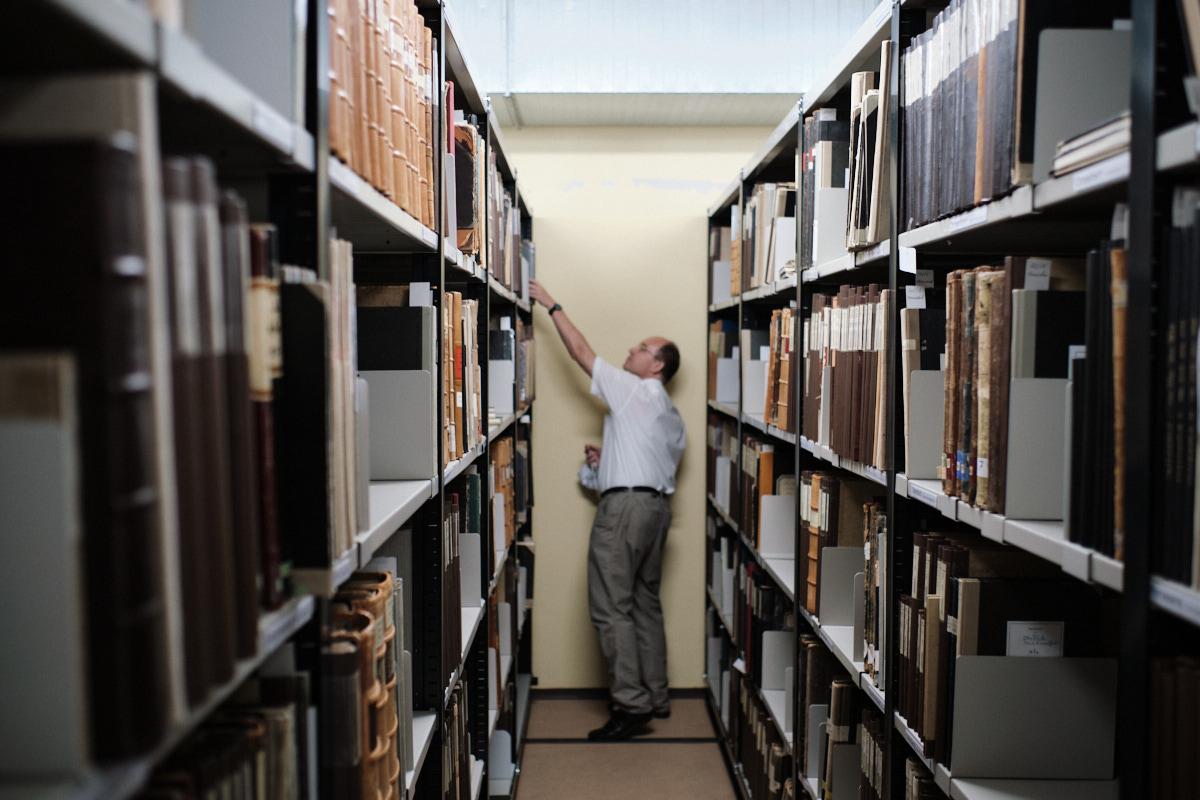 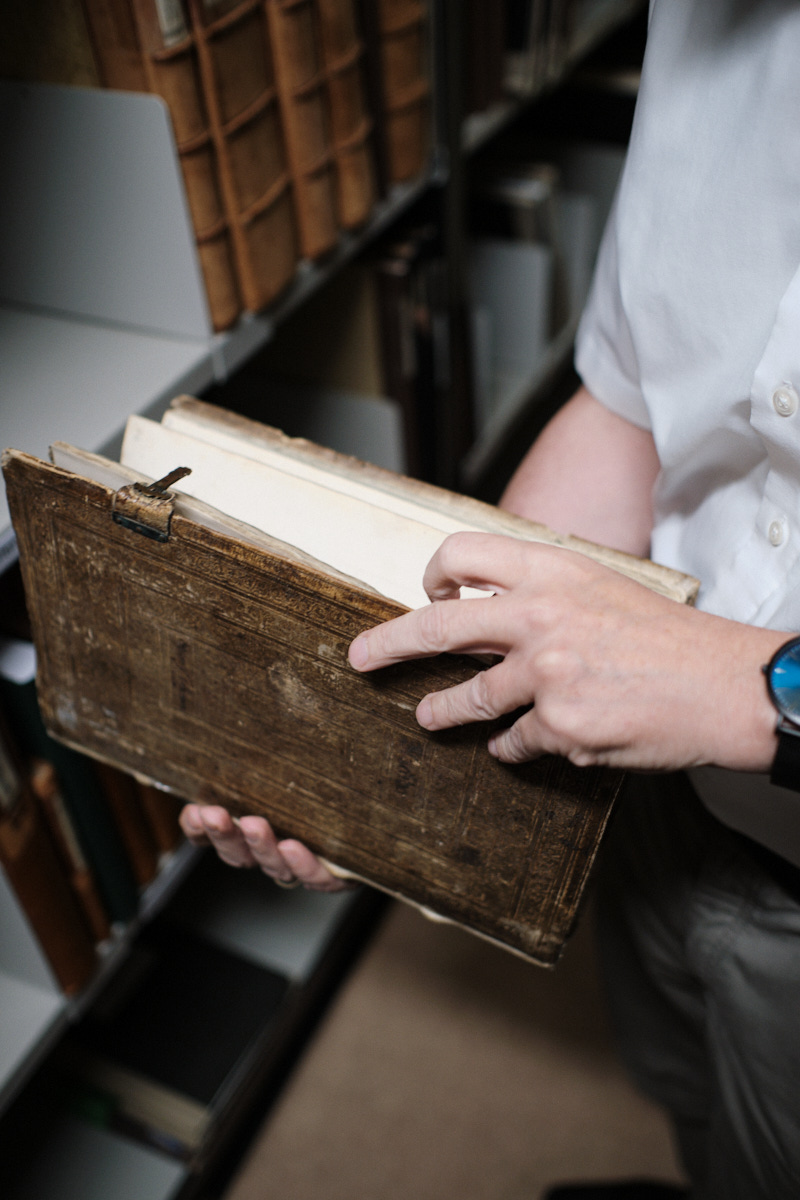 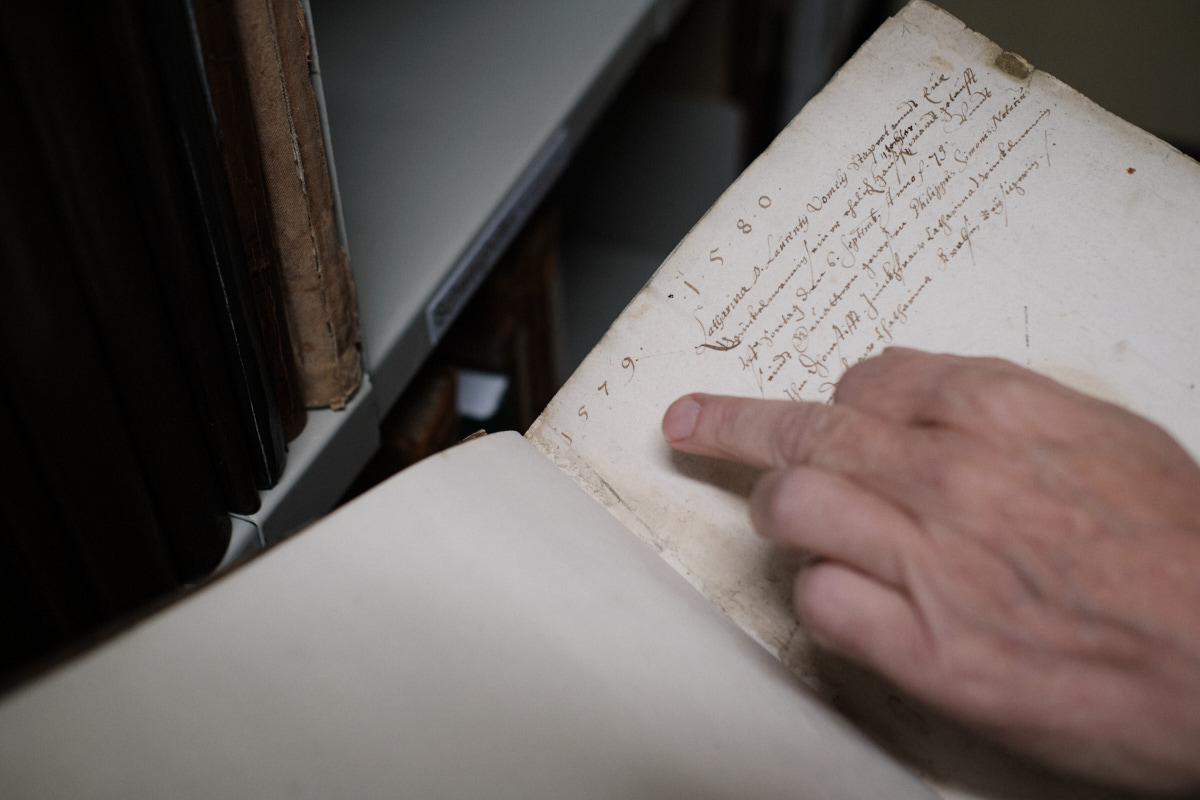 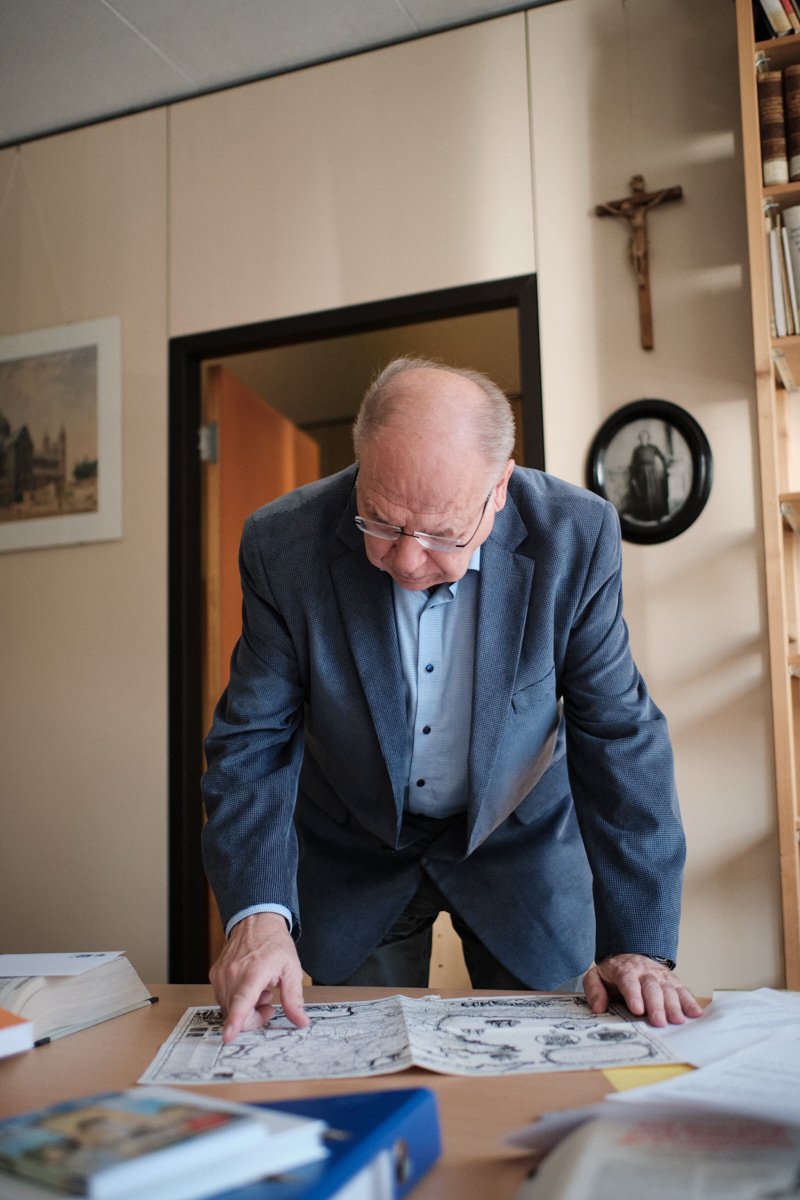 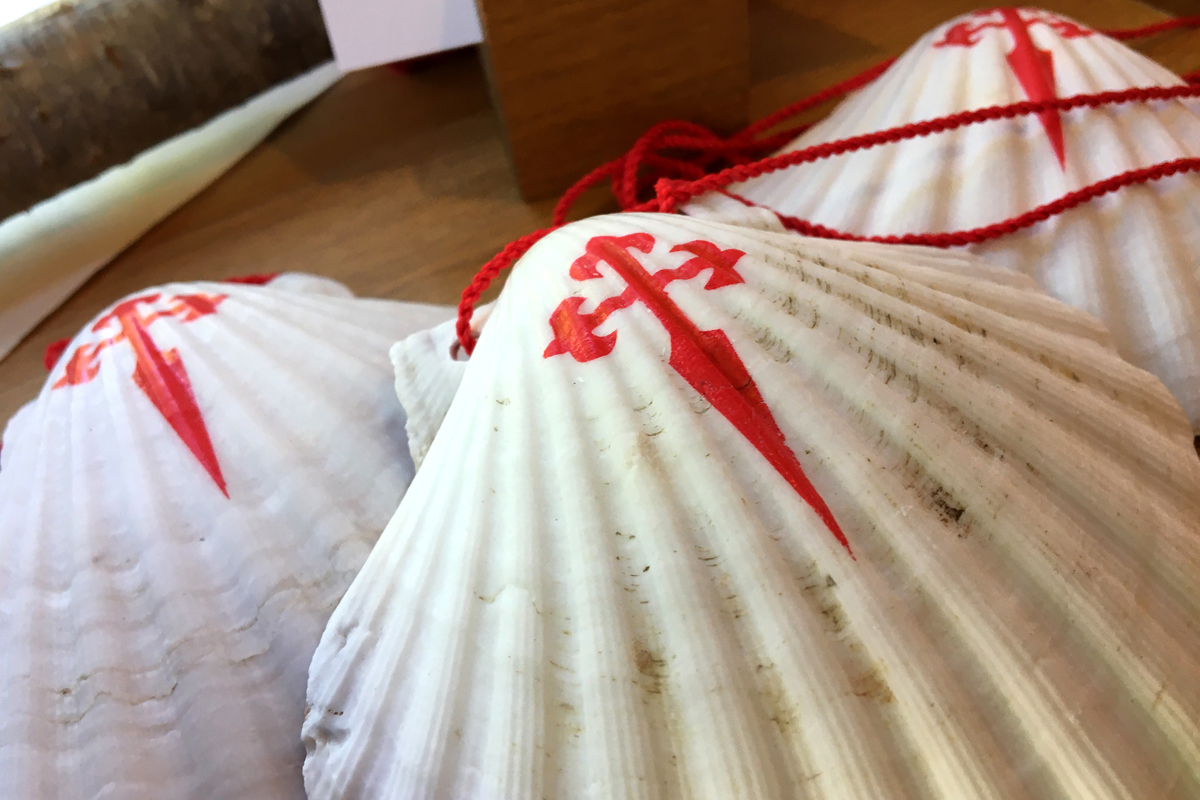 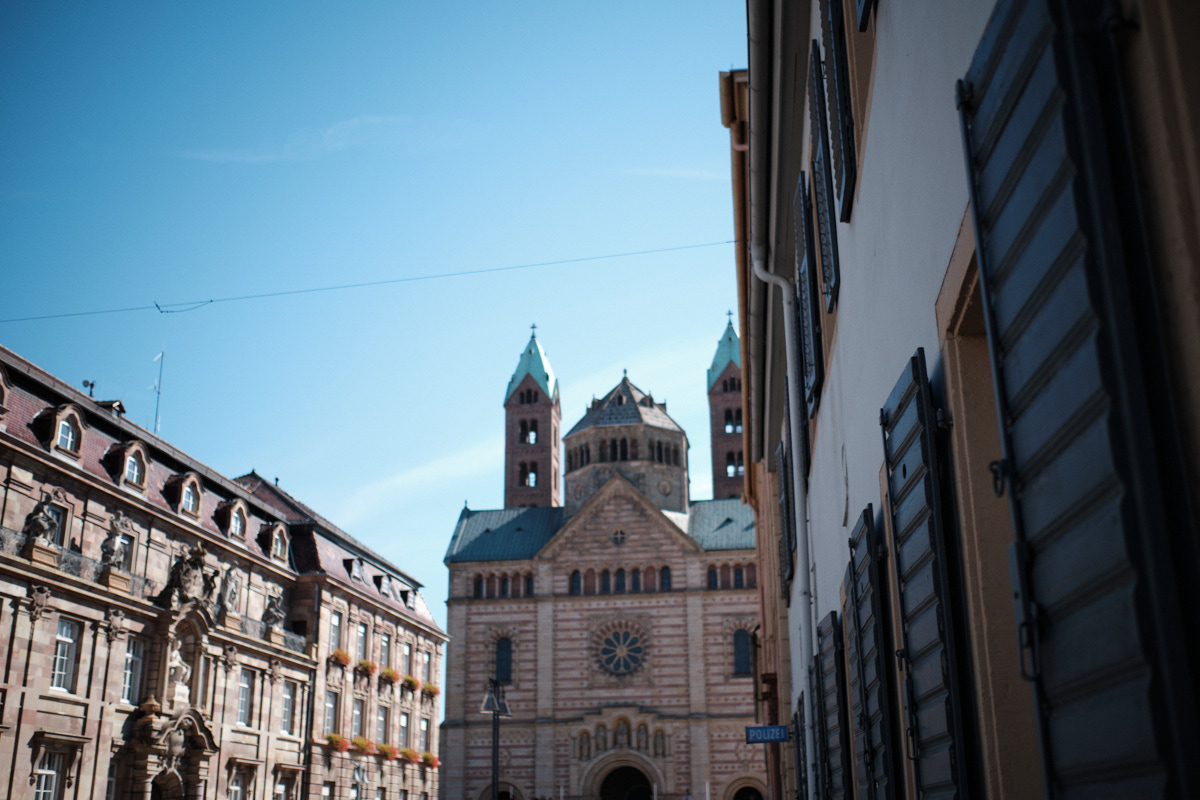 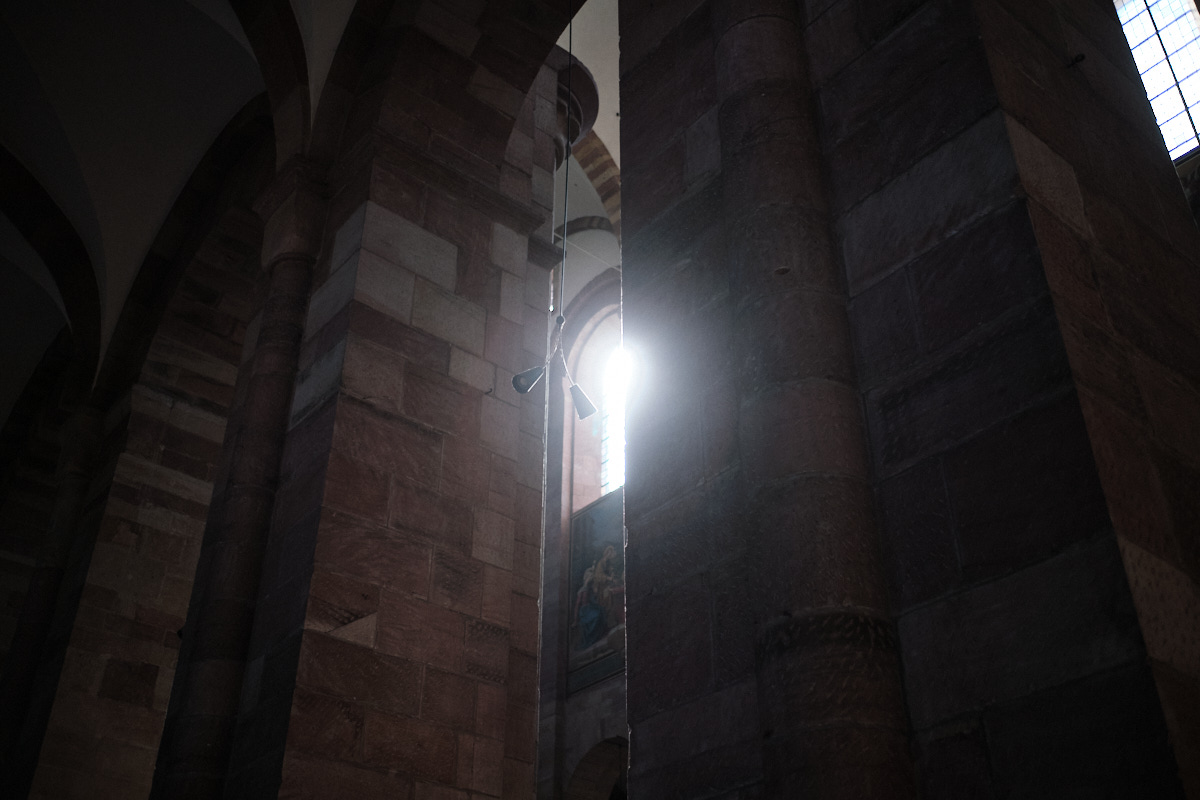 “Unfortunately, there weren’t many sources for the courses of the track,” says the historian. Are there any ancient pilgrims’ reports from the Palatinate or concrete directions over the past centuries? Not at all. So the two historians began to reconstruct the routes according to criteria they made themselves: They researched lodging, hospitals and hospices, where it is evident that pilgrims were admitted. They kept an eye out for the slightest signs of the St. James cult, such as pieces of art, murals and statues in churches or monasteries and on buildings. And they sifted through the towns for street names that advert to pilgrims. The project ‘Palatia Sacra’ undertaken by the Gesellschaft für mittelrheinische Kirchengeschichte (society for the history of Christianity in the Middle Rhine region) was a good support for the two researchers. This project has researched the impact of churches and monasteries in the Palatinate—from a Middle Ages perspective though. “It has helped us a great deal, because places that used to be hotspots of worship some centuries ago, may have become ruins or even forgotten today.”

“Speyer is the hub of the network of routes”

There are two routes through the Palatinate today and they were the same back then: one in the north, along the towns of Neustadt, Lambrecht, Erfenstein, Elmstein, Johanniskreuz and Landstuhl; and another one in the south, along the Haardtrand range with the towns of Germersheim, Herxheim, Mörlheim, Leinsweiler, Klingenmünster and Bad Bergzabern, Fischbach and Eppenbrunn. The two routes unite at the former Hornbach monastery. From there, the Way leads towards France. “Pilgrims from the Palatinate certainly took the old Roman road on the left of the Rhine from Mainz and Worms,” Hans explains. And, no matter from which direction they approached the Palatinate, one thing is for certain: Speyer is the hub of the network of routes. 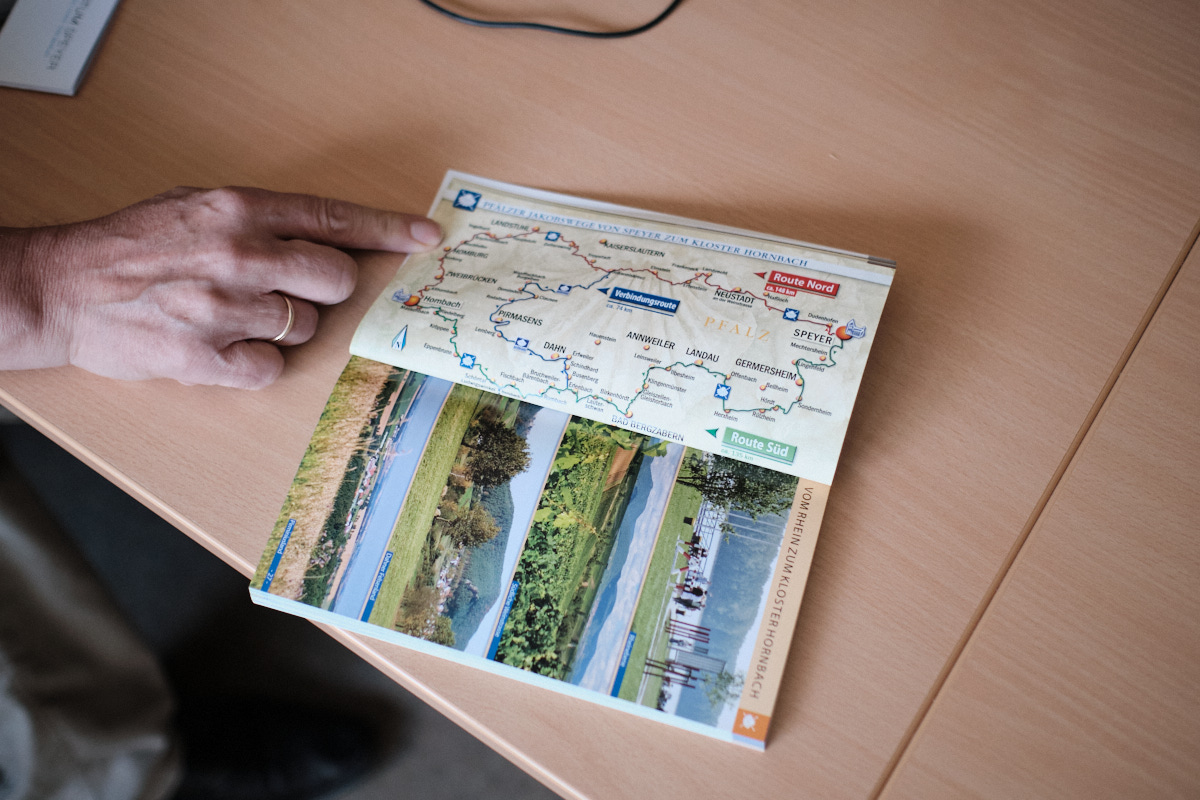 Hans came to the cathedral town in 1979, when he had just completed his apprenticeship as a historian and his work in the archives. He recalls the time: “At first, I worked on merging the manifold historic holdings of the Diocese.” Hans is well-known beyond the boundaries of his region as an expert for Palatinate state, church, administrative and constitutional history and was honoured for his life’s work by the public Bezirksverband Pfalz association in 2015. Sitting at his desk, he continues to write essays and books on a daily basis even today. “The Palatinate is an area that has witnessed radical changes caused by the wars,” says Hans. This is an ongoing matter of interest for his work, which will practically never be finished—‘the journey is the reward’ also applies to a historian’s life. 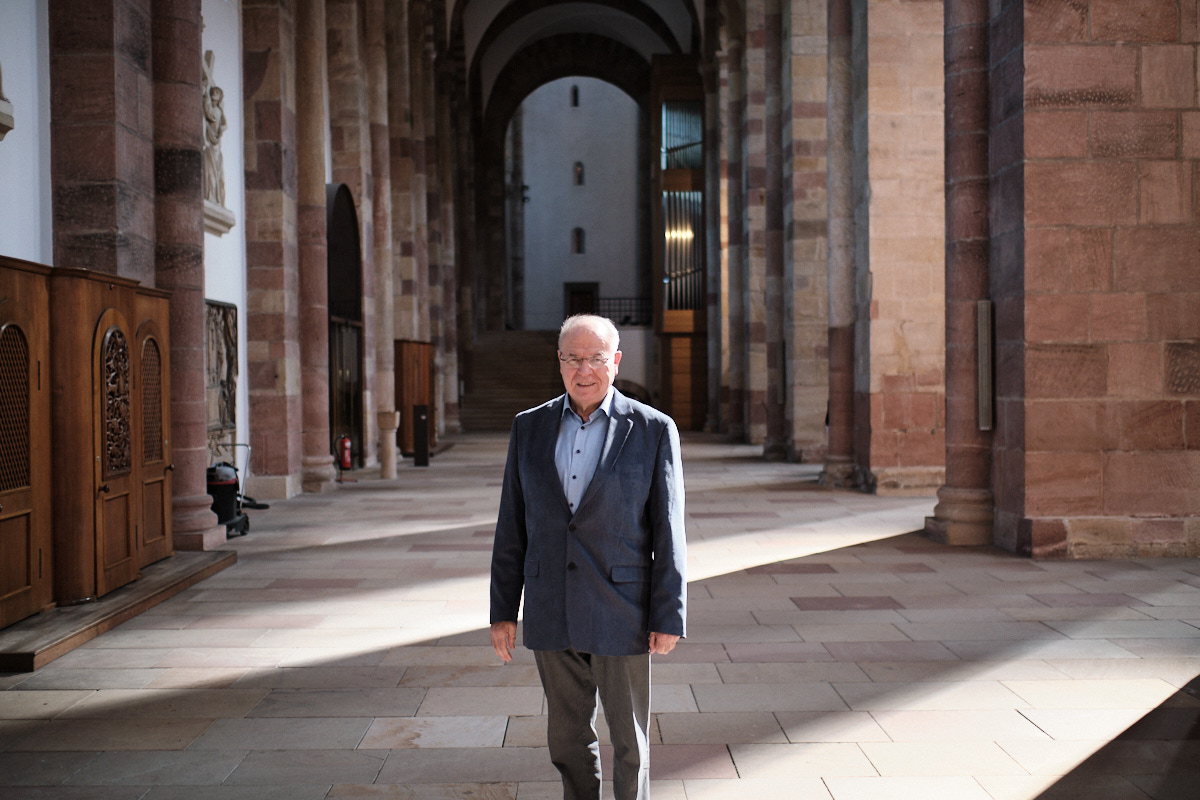 Hans came to the cathedral town in 1979.

A few metres from the archives of the Diocese in Kleine Pfaffengasse road there is the Dom-Shop (cathedral shop) that sells scallop shells and pilgrims certificates. “The burial site of the emperors used to be an important place of pilgrimage with an alleged miraculous effect,” Hans explains with a smile. Evidently, there used to be a St. James alter in the cathedral crypt until it was destroyed by the French. Pilgrims used to have very different motives for their long pilgrimages to Spain: “Some went for atonement and penance, others to express their gratitude after a long illness. Some even went on behalf of another person,” says Hans. They took a lot of risks on their journeys, as the many hospitals along the Way show. One of these hospitals used to be south of the cathedral: the so-called ‘Deutschordensniederlassung’ that admitted poor and sick people—and pilgrims. 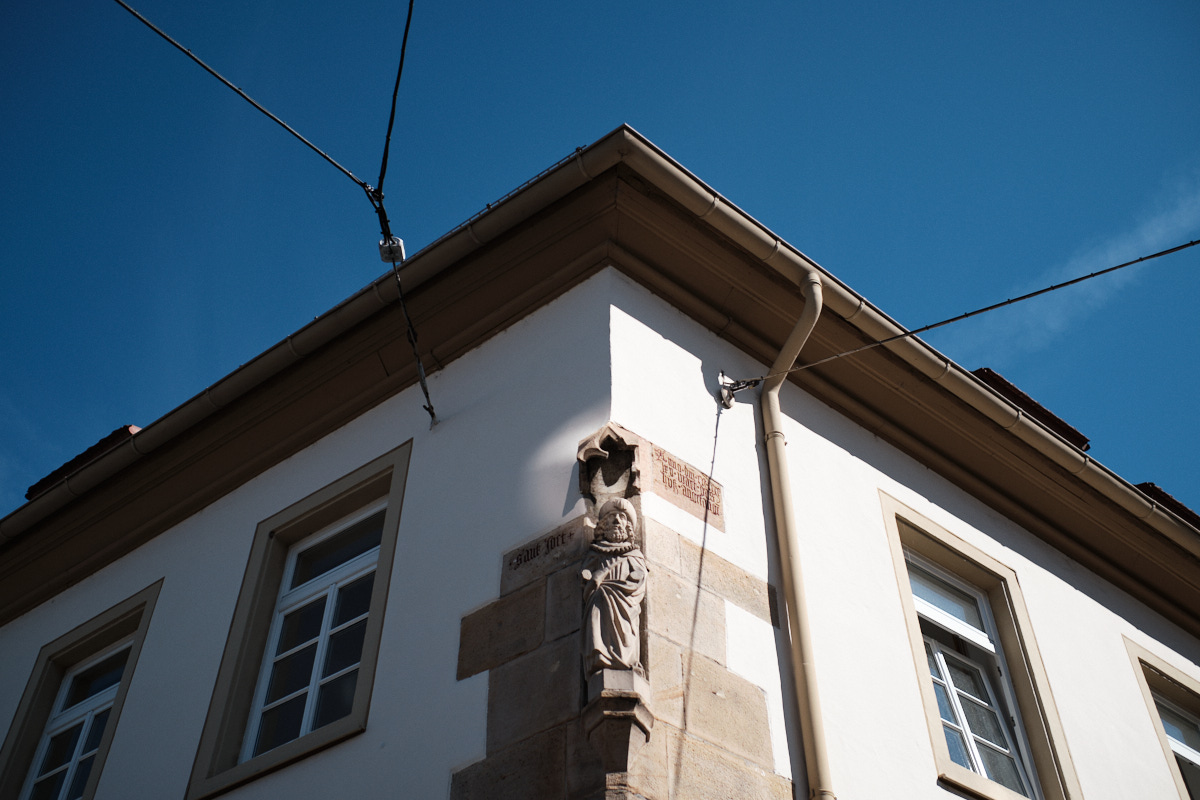 Close to the Königsplatz square a statue of St. Joyce from the year 1462 greets passers-by from above their heads.

In the Historical Museum of the Palatinate, there is a preserved stump of a pilgrim’s statue that probably originates from the medieval St. Jakobus church that must have been in what today is Heydenreichstraße road, torn down at the beginning of the 19th century. And in the Speyer town archives you can find a seal by the Speyer Jakobsbruderschaft (St. James brotherhood). Similar brotherhoods used to be located in Landau, Germersheim, Barbelroth and Roth. After a few-minute walk from these archives, Hans points at another clue in the city: Close to the Königsplatz square at the corner of Schustergasse, a statue of St. Joyce from the year 1462 greets passers-by from above their heads. A few metres from there, in Maximilianstraße road, a larger-than-life pilgrim awaits visitors: “Bishop Anton Schlembach gave the figure as a present to Speyer for the town’s bicentennial,” says Hans. The bronze figure made by Martin Mayer, however, has no eye for the cathedral’s grandeur—the pilgrim with a conspicuous hat and a walking stick turns away, as if he was in a hurry, heading for Santiago de Compostela.

The south route through the Palatinate

The north route through the Palatinate 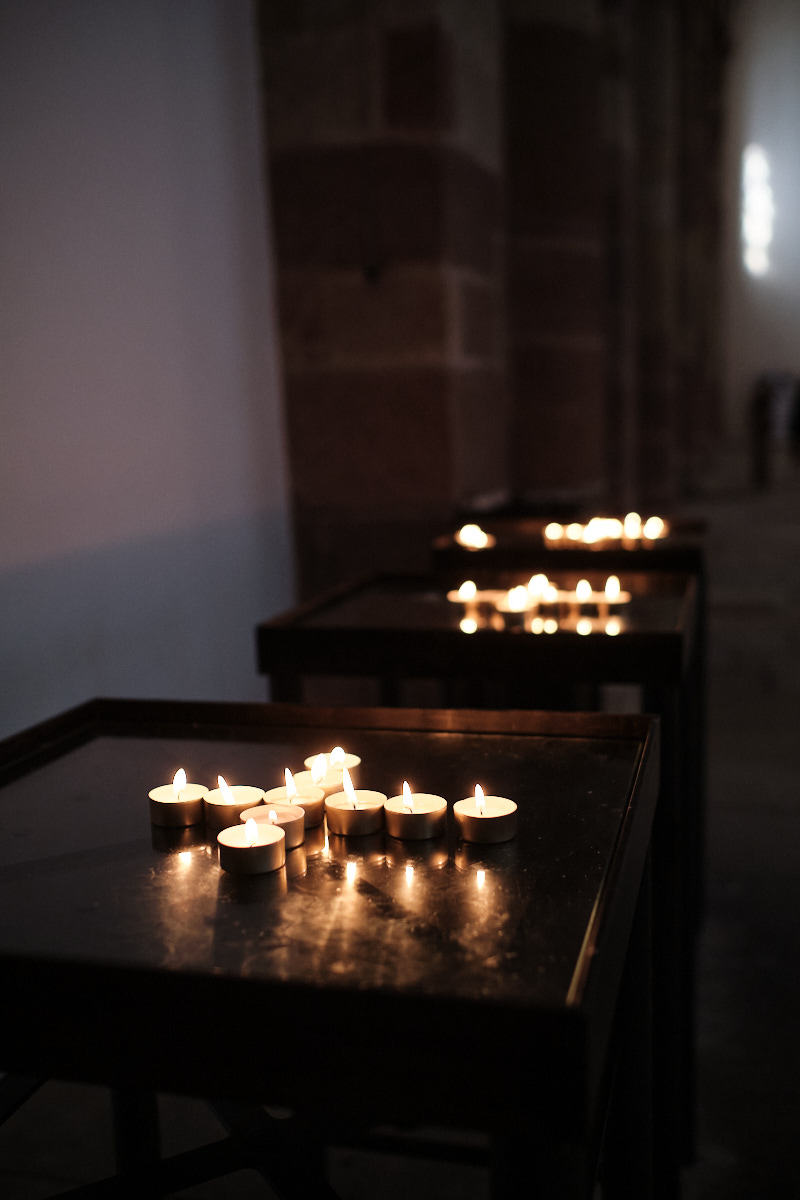 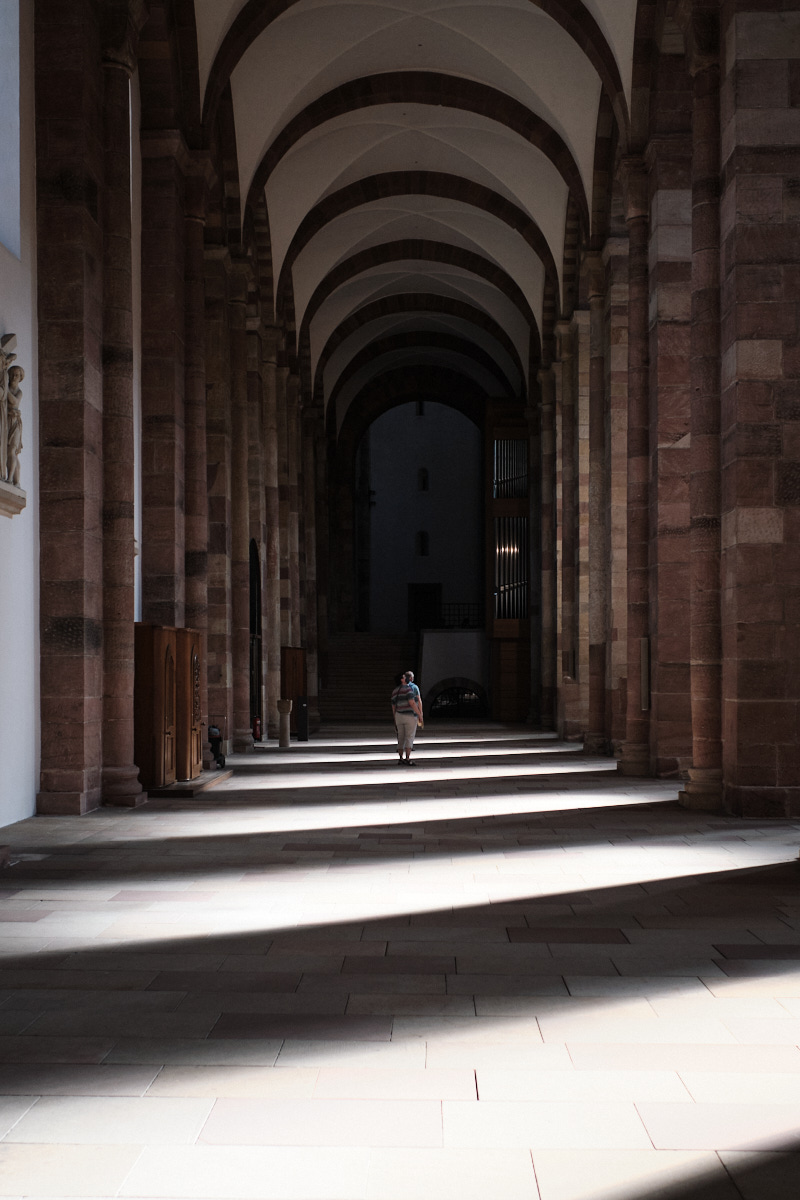 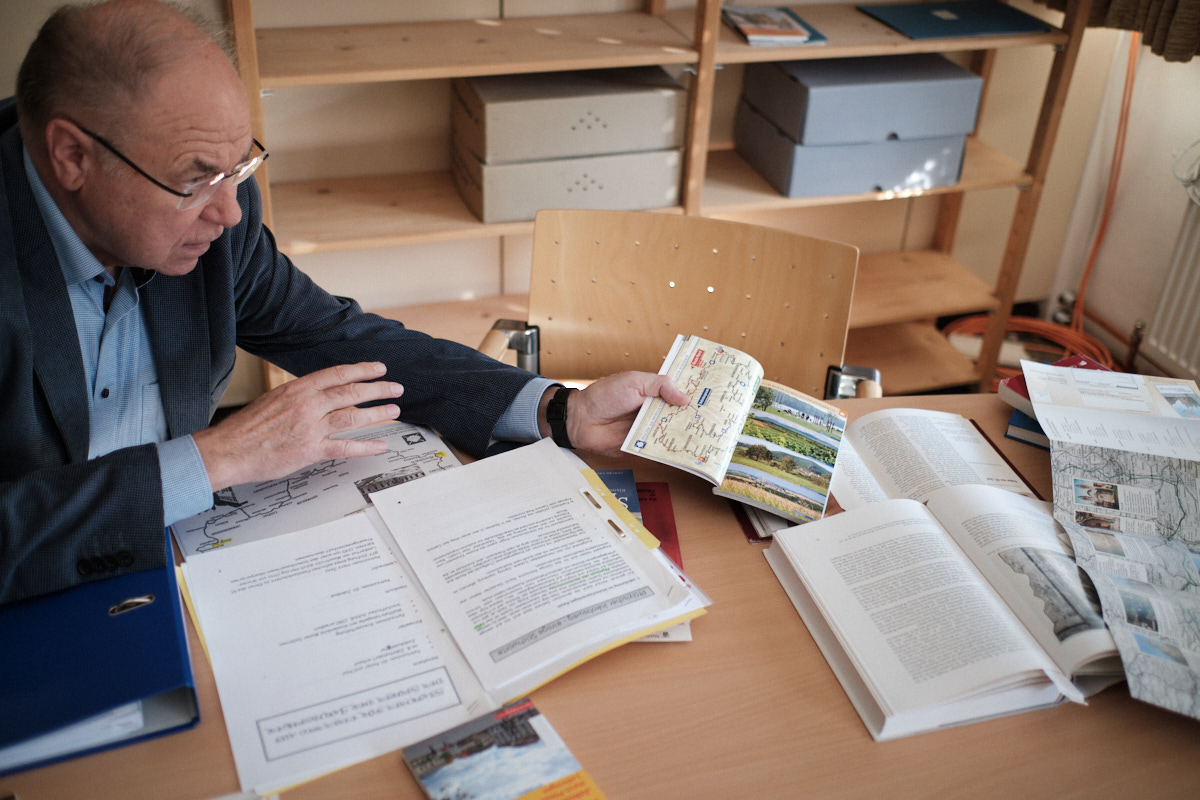 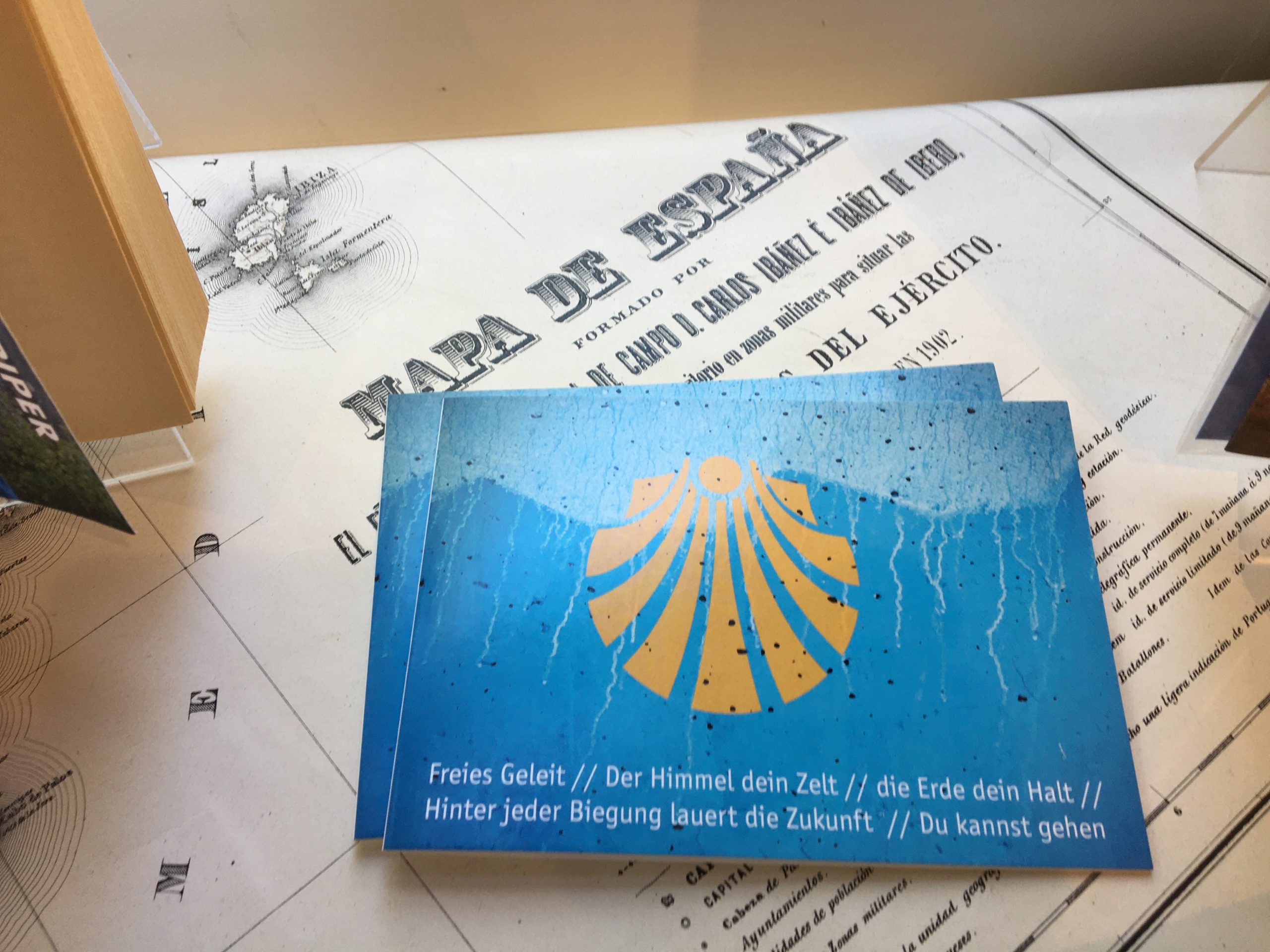 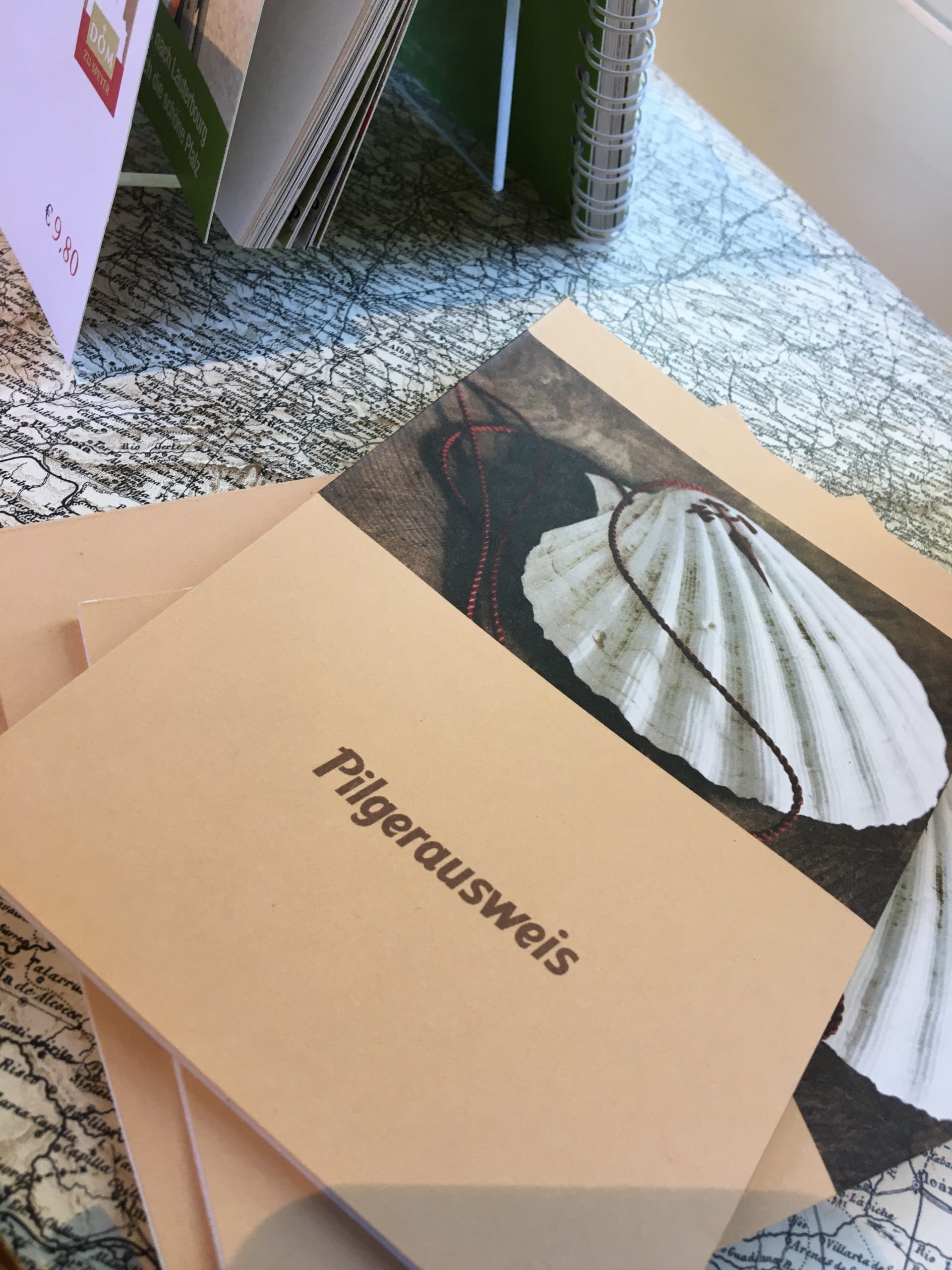 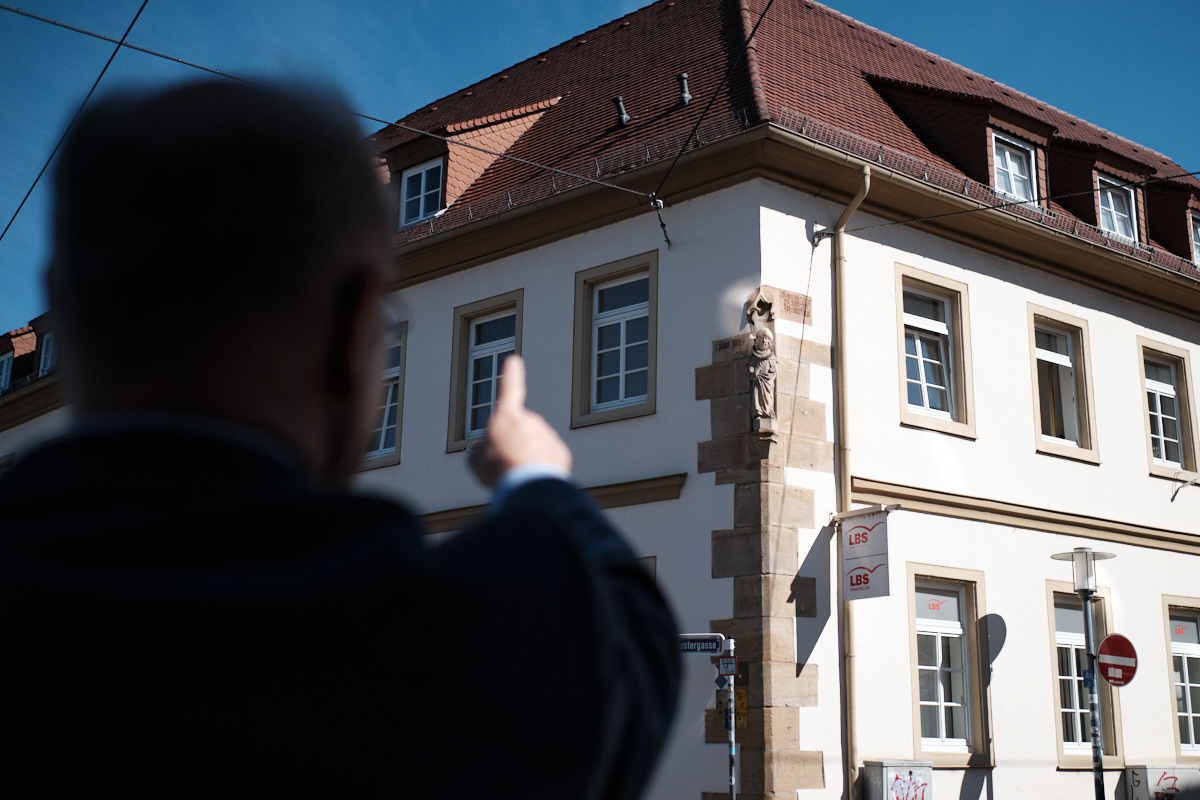 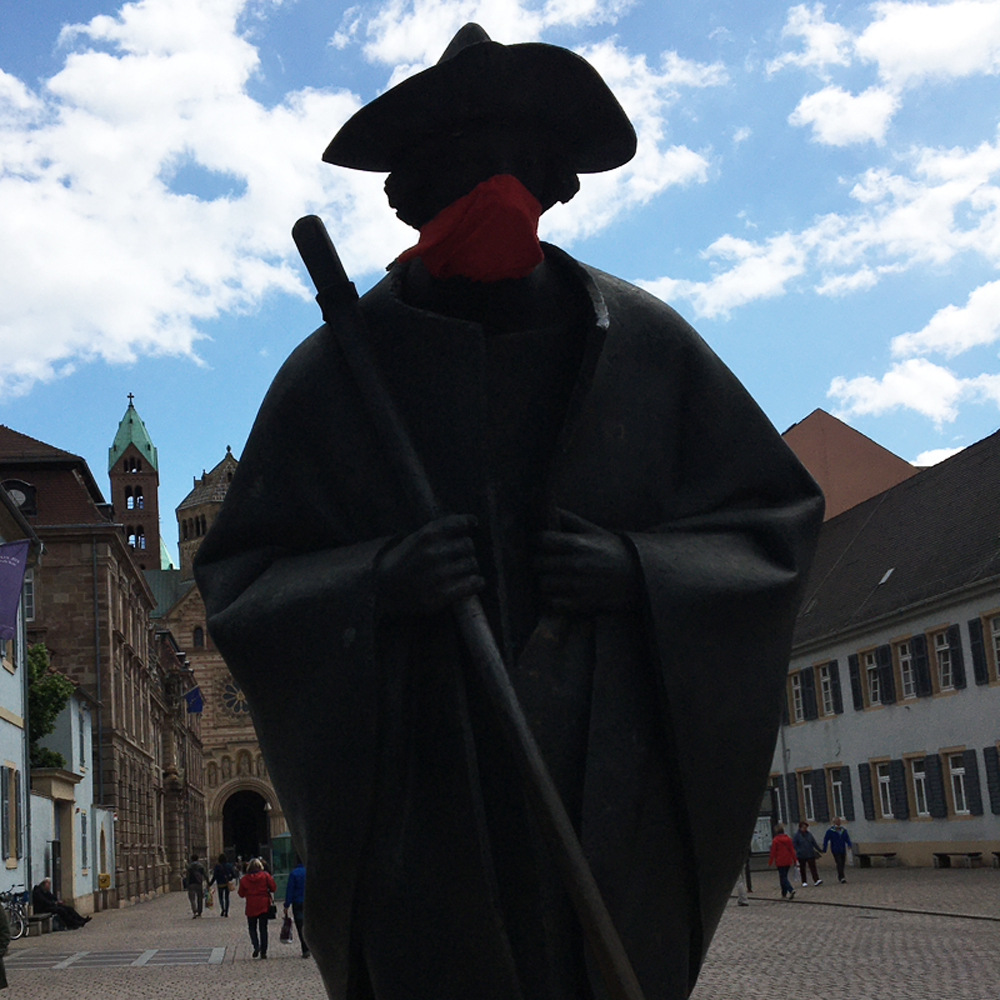