Steam in the Palatinate

For both musical instruments and steam boilers, this man has a safe pair of hands: Ralf Rudolph plays the tuba at the German State Philharmonic Orchestra of Rhineland-Palatinate – and now he is going at full steam with the Kuckucksbähnel (Cuckoo Railway) across the Palatinate region again.

Like a tame big cat with clouds of steam rising almost peacefully, the engine is resting. But as soon as you approach it, you will feel the tremendous heat escaping from its bowels and you become aware that the meek-seeming steel giant is more than able to hiss. Don’t take the end of the line literally, where Ralf Rudolph has parked the steam locomotive of the railway-lovers in the town of Neustadt this morning: in half an hour’s time the Kuckucksbähnel (Cuckoo Railway) will depart from Neustadt an der Weinstraße to Elmstein – across the Palatinate Forest.

Hustle and bustle on the platforms 4 and 5 with the sounds of hikers’ walking sticks and children stomping around. Eventually, the locomotive arrives at the station with enormous clouds of steam and hooting to the passengers. How about white handkerchiefs waving?

The route runs from Neustadt past Lambrecht, Frankeneck, Erfenstein, Breitenstein and Helmbach all the way to Elmstein – and back. The historic route across the forest became operational in 1909 and was used for passenger transport until 1960, after that only goods trains carrying timber cargo kept rolling along the picturesque route until 1977. A bicycle route was planned to be created here, but the railway-lovers in the town of Neustadt revived the railway route.

They like putting their shoulder to the wheel: Ralf Rudolph (on the right) and Horst Kayser – branch directors of the Eisenbahnmuseum (railway museum) in Neustadt

The German association for railway history “Deutsche Gesellschaft für Eisenbahngeschichte e.V.” have two historical steam locomotives in their actual fleet and they maintain the most comprehensive railway archives in Germany. Their rail network, periodically serviced by a railroad construction department, comprises 13 kilometres of rail distance. You can even train as a stoker or a train driver, like Ralf Rudolph did. He directs the museum and the regular Sunday’s tour on a voluntary basis. In his everyday life, he is a solo tuba player at the Staatsphilharmonie Rheinland-Pfalz (German State Philharmonic Orchestra of Rhineland-Palatinate) and gives lectures at various musical colleges. Next to business trips, concerts, and rehearsals he has committed himself to the Eisenbahnmuseum (railway museum) since 1975, only two years after its foundation. This way he lives kind of a childhood dream: he had wanted to become a train driver ever since he was a little boy. As well as a musician. He has become both. 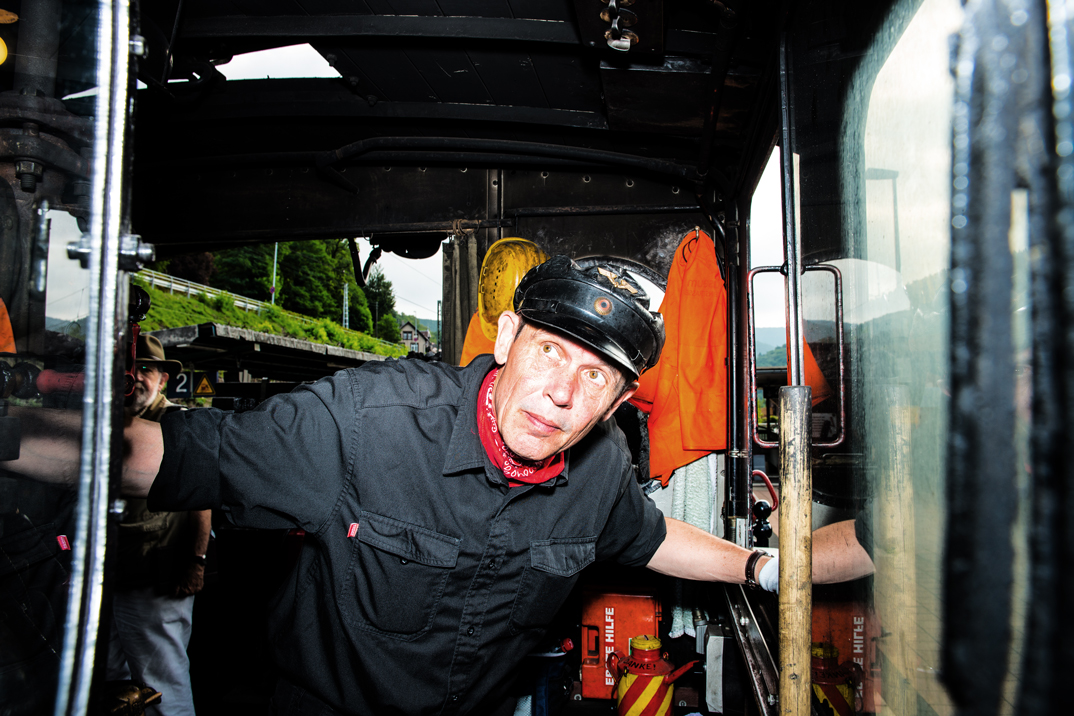 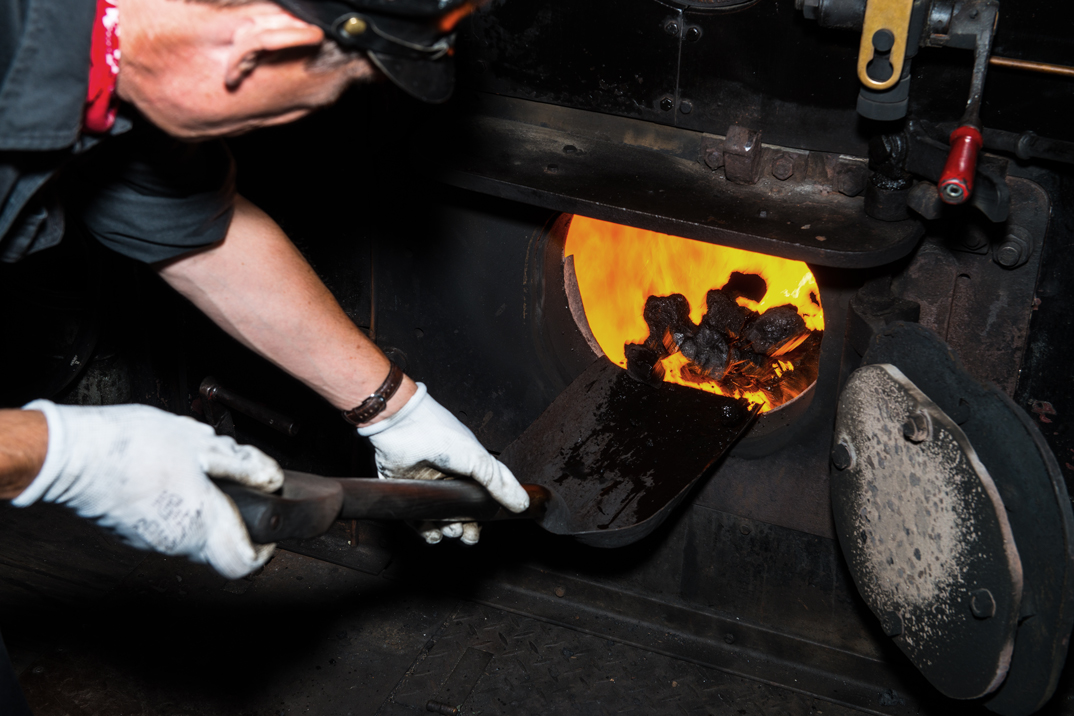 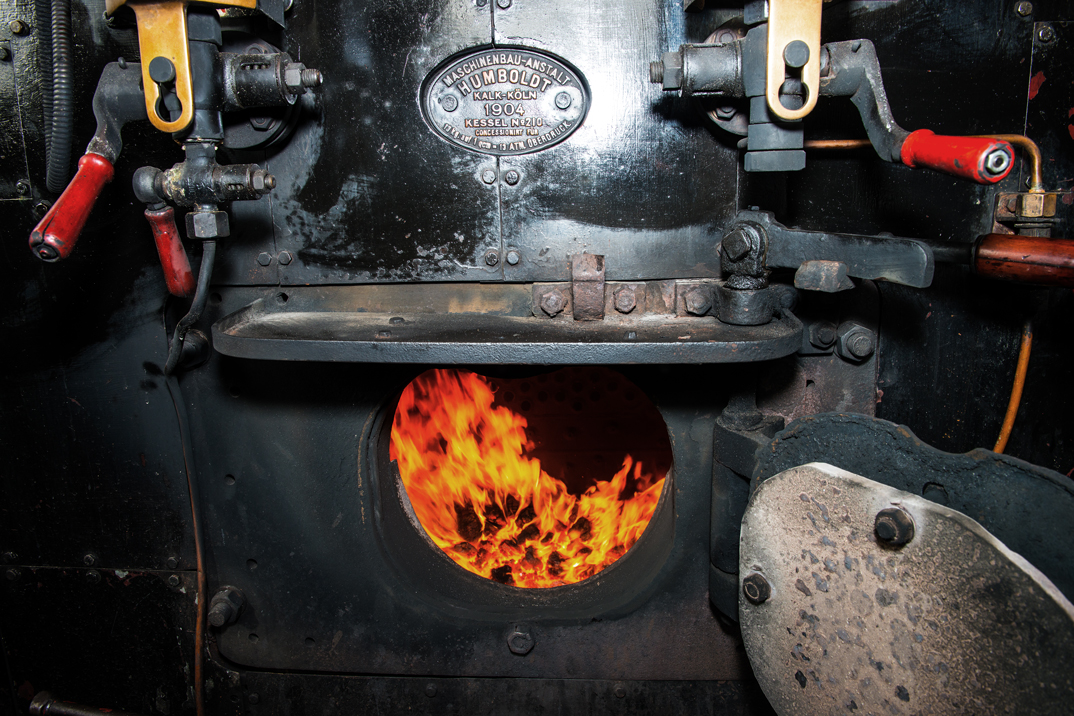 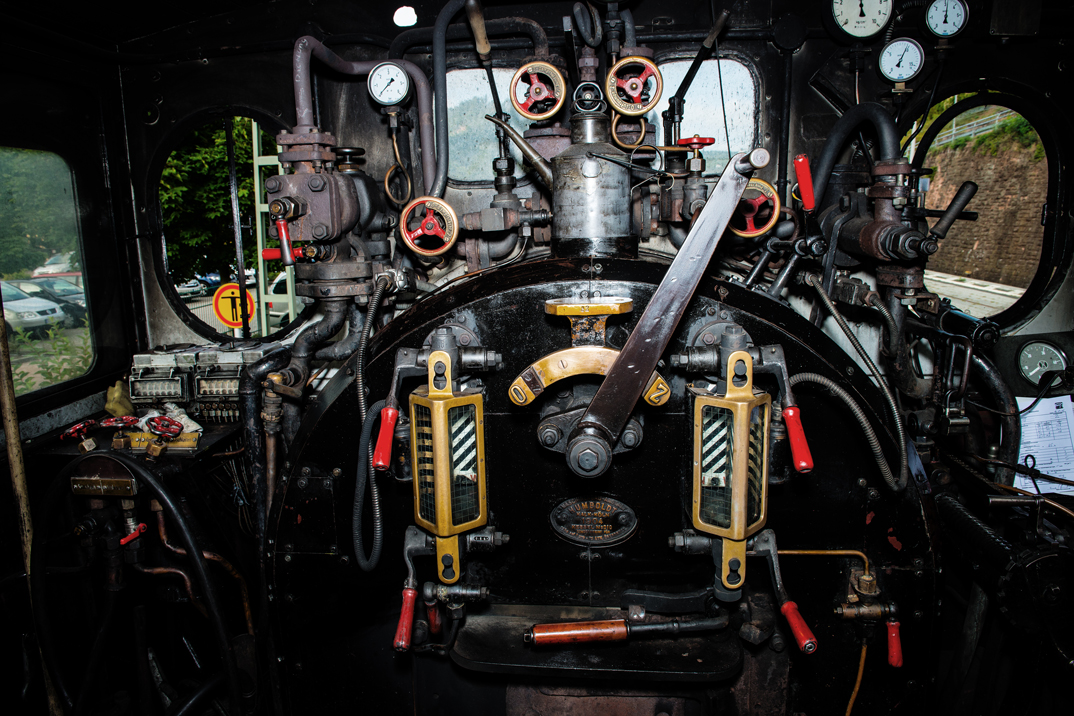 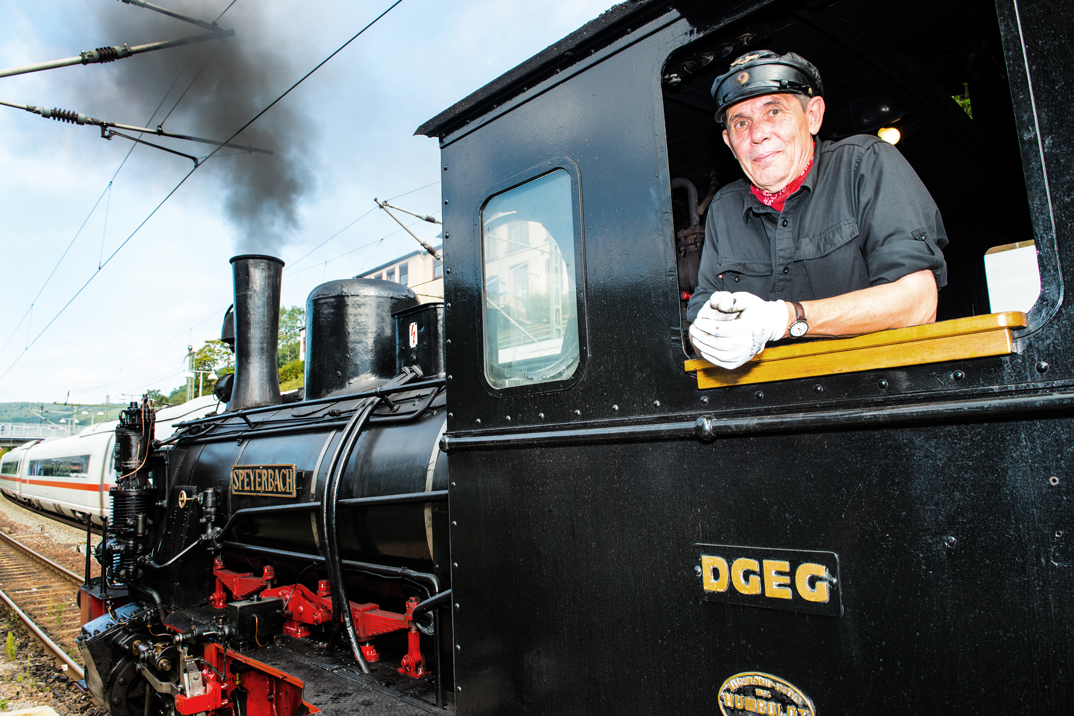 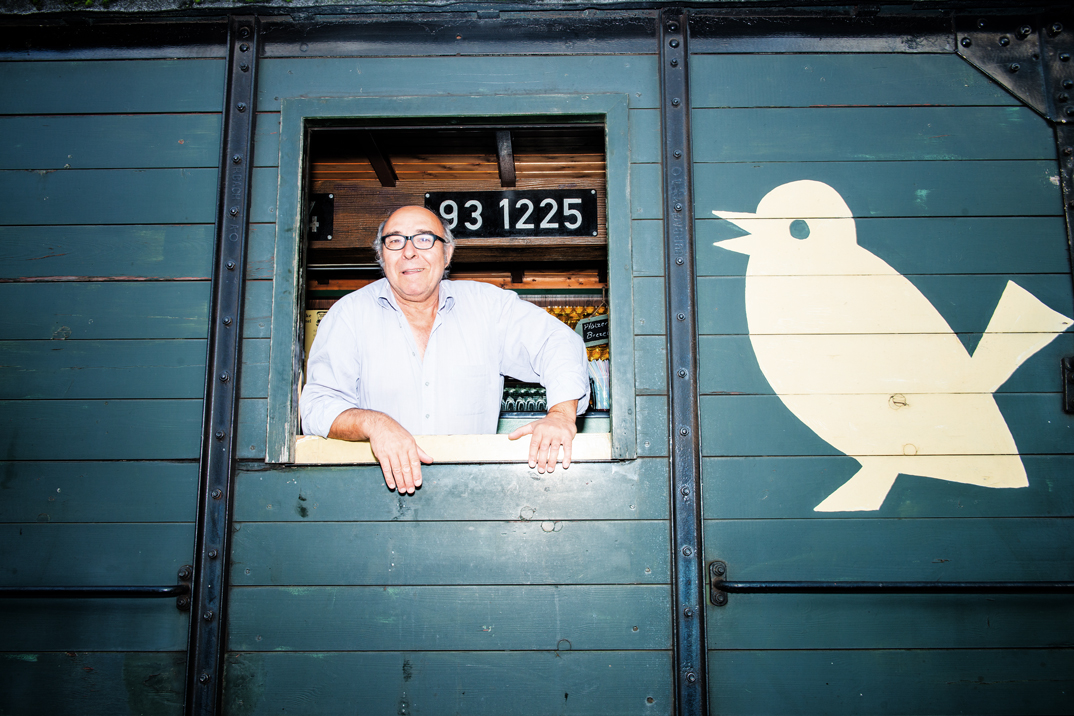 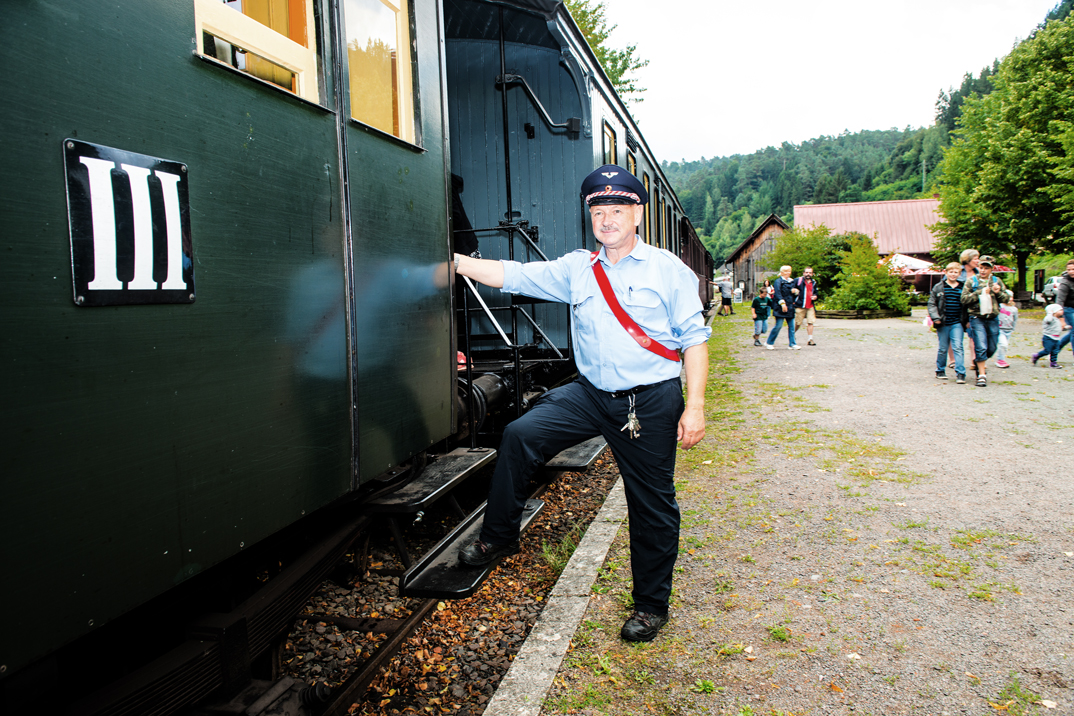 Ralf Rudolph lives in Hambach in the Palatinate region. There, he was a conductor of the Kolpingskapelle (Kolping brass band) and the founder and head of the local school of music. He has Jazz in his blood and his repertoire ranges from Bach to Blues, because the 53-year-old has also been playing in his own ensembles for decades, such as in the brass player quintet “Rennquintett” related to the public broadcasting institution Südwestrundfunk. A special feature was his musical performance in Neustadt at the platform and in the very “Kuckucksbähnel” in front of television cameras.

“This is applied physics,” says the railway admirer with a splash of oil or two in his face. He is up and about since six in the morning, as usual, and he has been busy with the “lady” – the old locomotive – since seven a.m. Along with 21-year-old Joschka Baum who assists him as a stoker, removes the slag, puts more coal on, and refills the nearly 19,000 litres-capacity tank with water. Beforehand, they have jointly checked the lubricants, polished the vehicle, and stoked up the boiler to twelve bar. Of course, all of this is voluntary work. They fill out the driver’s log in the evenings, and they MOT the “old lady” as one should.

Steam locomotive admirers: train driver Klaus Schwehm (in black and wearing a cap) together with former colleagues from the railway works “Bahnbetriebswerk Kaiserslautern”

“Maschinenbau-Anstalt 1904, Humboldt Köln-Kalk” (a reference to the mechanical engineering enterprise in Cologne-Kalk) is written on the locomotive, which had been a harbour railway in Cologne, a coal mine railway in the Ruhr region later on, and finally has become part of the railway museum in Neustadt.

“The railroad is in all its relations a matter of earnest business, to be got through as soon as possible,” the British writer John Ruskin stated in the middle of the 19th century. A traveller is transmuted into a “living parcel”. The carriages that are coupled to the old steam engine present quite a different scene: a friendly get-together of women with their box lunches at the window, next to them a men’s choir singing the German line “Auf der deutschen Eisenbahn”, and white wine spritzer drinks starting to be served in the bar car – the typical Palatinate style of course, wine with a splash of sparkling mineral water.

The unhurried maximum speed of 40 kilometres per hour that the Kuckucksbähnel can reach – on even stretches – go perfectly well with this ambience. Looking out of the window, you can see little villages and castle ruins passing, and aisles in the woods dug up by wild boars. It seems funny that people in the 19th century felt the railway was too fast. This tour really makes you rediscover a leisurely pace. Slow motion à la Palatinate. This could be vacation in your homeland. And it starts with a ticket. From platform 5 – right in the middle of Neustadt.