These days, you can take a virtual tour of Speyer Cathedral online. But it is even more impressive to see the majestic construction in person. Friederike C. Walter and Bastian Hoffmann organise guided tours and cultural events and show why the cathedral is so much more than a UNESCO World Heritage site and the biggest preserved Romanesque church in the world: It is also a place of retreat for people who love silence.

The spires of the highest steeples of the biggest preserved Romanesque church in the world disappear in the fog on this cold winter day. A street musician blows the trumpet softly and quietly – in the cathedral garden a man wearing a Santa costume tries to fight the icy temperatures by playing the accordion. With the musicians at your back you can view the impressive scenery of Speyer Cathedral – burial place of emperors.

The striking sandstone facade reveals the exciting, often wild history of Speyer Cathedral going back to 1030, the year the foundation stone was laid. Looking closer you can perceive different construction phases. You then see that the colour of the stones changes constantly, that their size and evenness varies. And yet, in order to fully understand, you need someone – someone who knows and is able to tell the stories of all these stones.

Someone like Friederike C. Walter, the 39-year-old art historian and head of the cultural management department of the cathedral chapter. She organizes guided tours, provides information material and is the contact person for visitors. And she gets very enthusiastic when it comes to the cathedral itself: its complexity, its “impressive dimensions, its theological, (art) historical and architectural importance.”

Head of the cultural management department of the cathedral chapter: Friederike C. Walter

In the central nave, some visitors sit on modest wooden pews, unified by silence, each, however, deep in thought. Your eyes begin slowly to wander, and then go up. It is a full 33 metres to the ceiling. A single person can suddenly feel quite small underneath it. The flames of the votive candles flicker amidst the draft coming in from the side door. The faint yellow light, however, creates a warm atmosphere in a cold and awe-inspiring construction, which made Speyer one of the most important cities of the Holy Roman Empire in the Middle Ages. 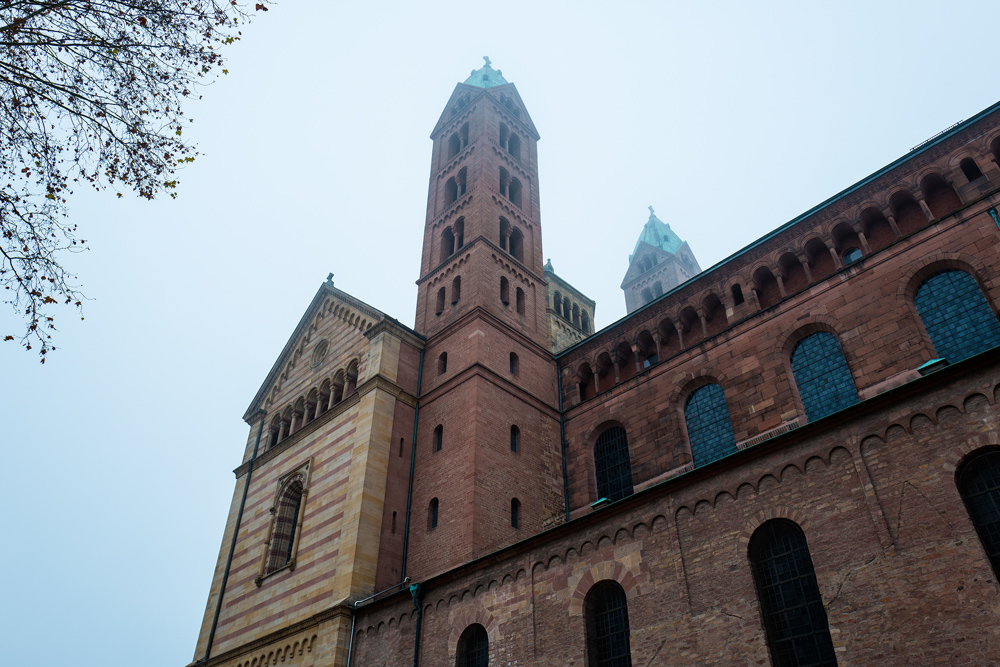 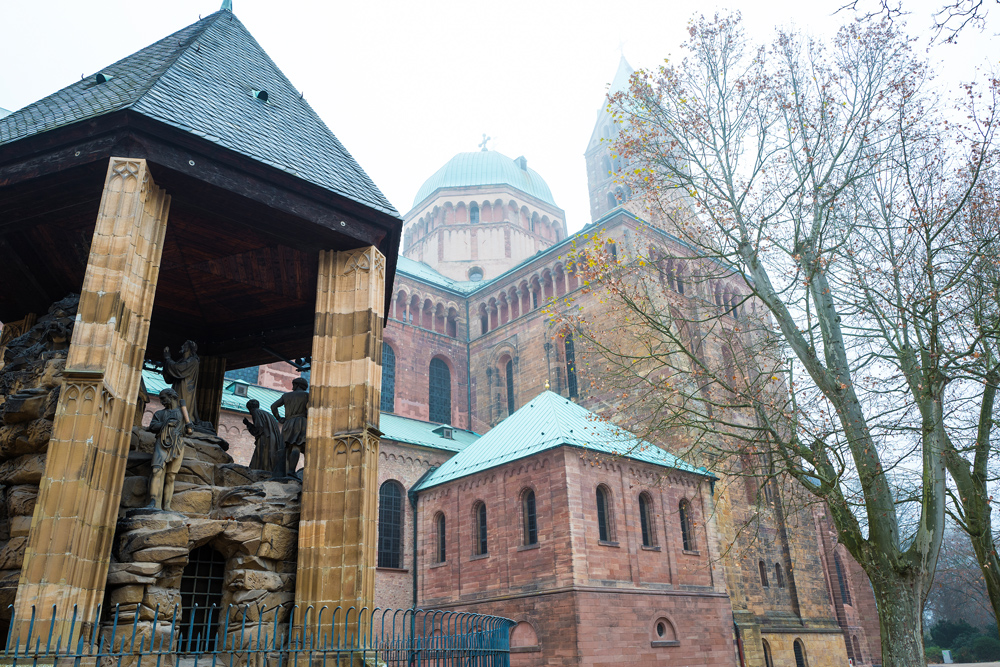 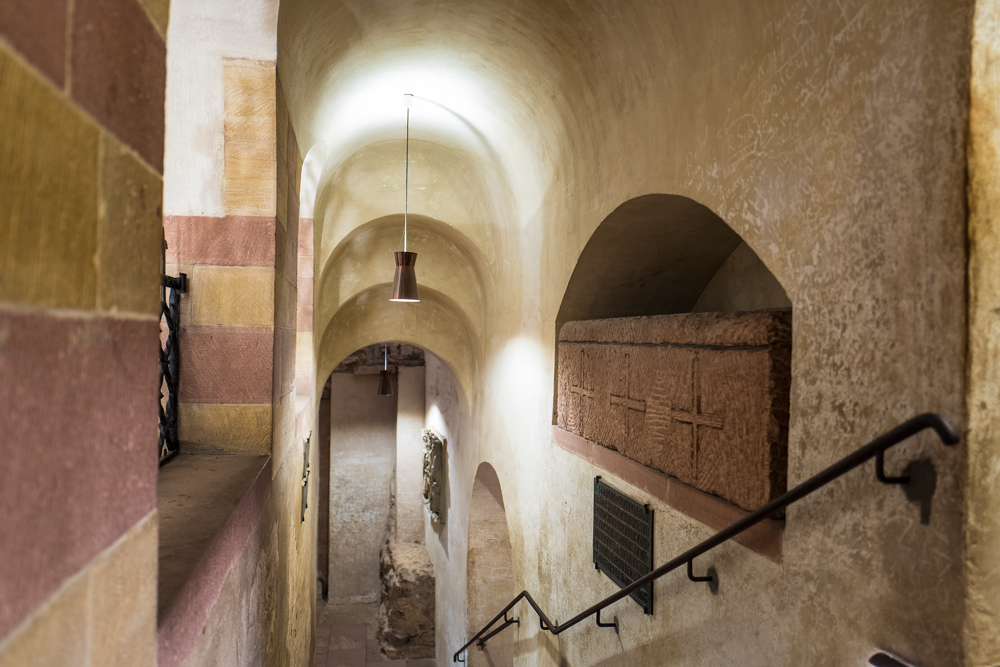 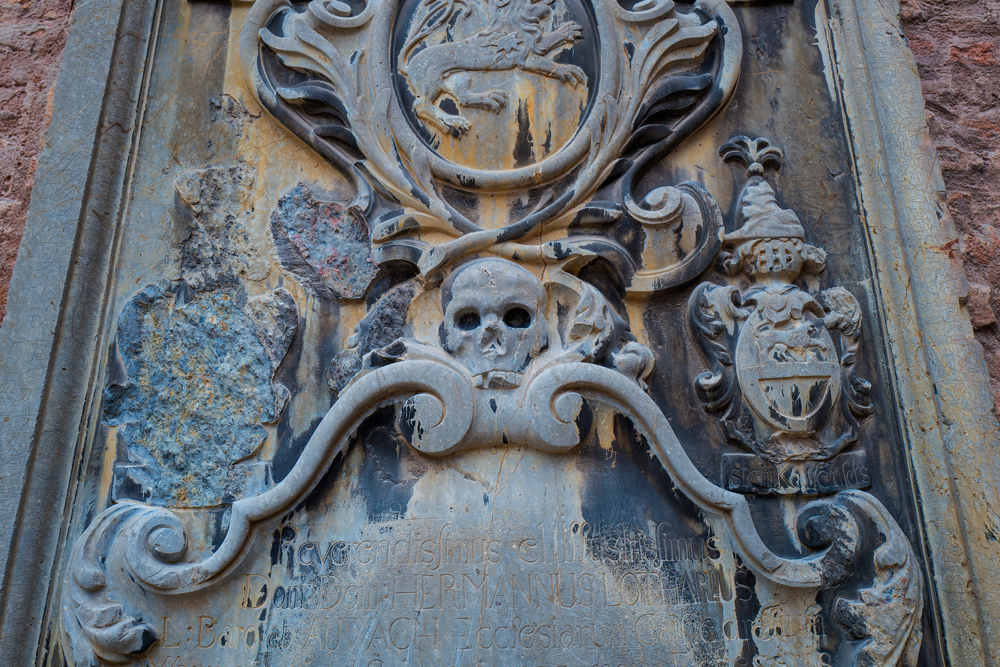 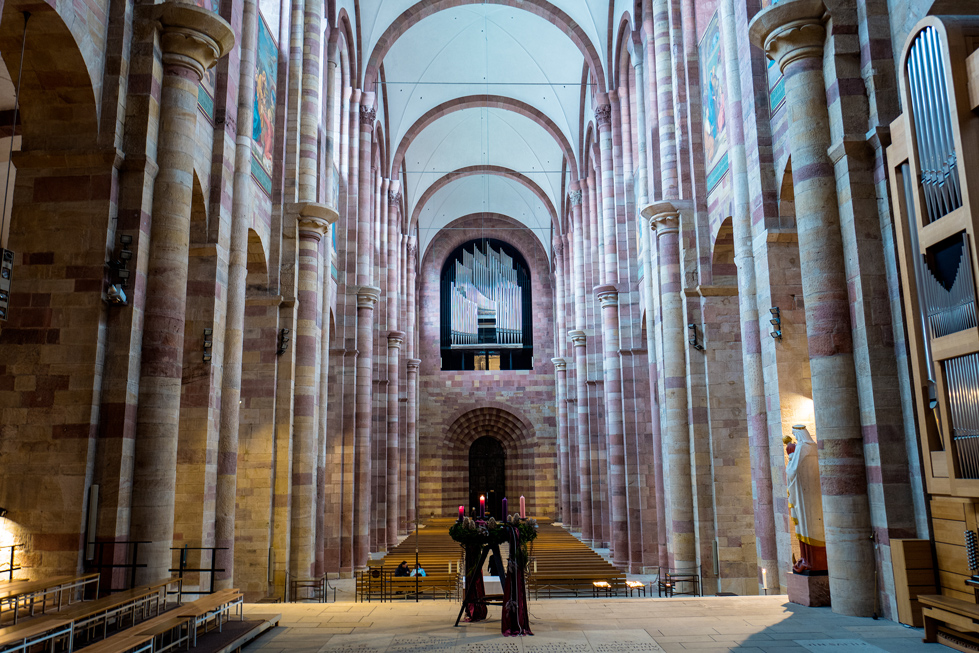 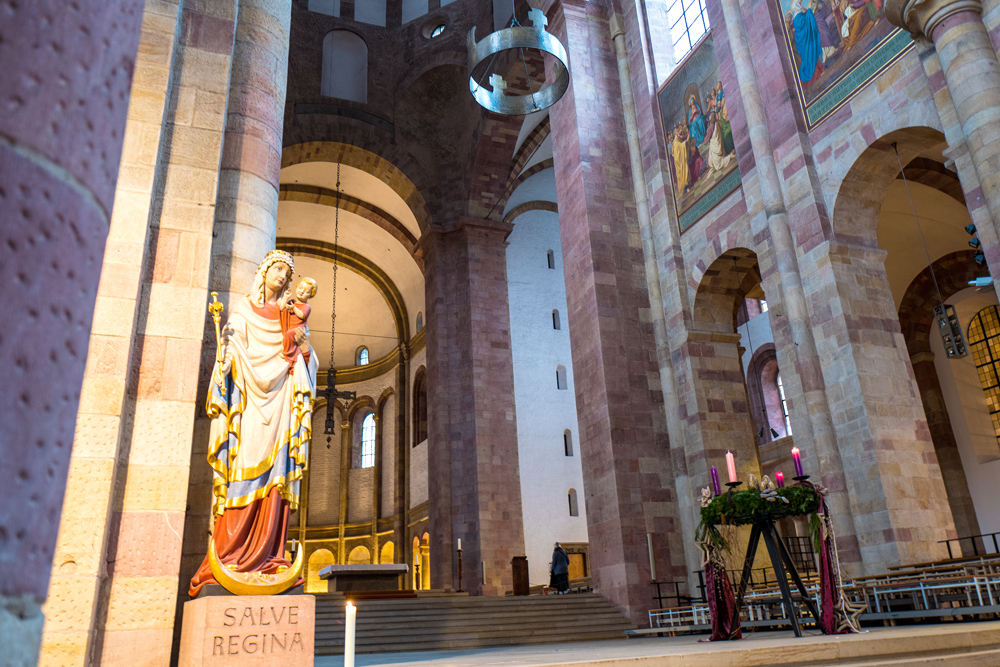 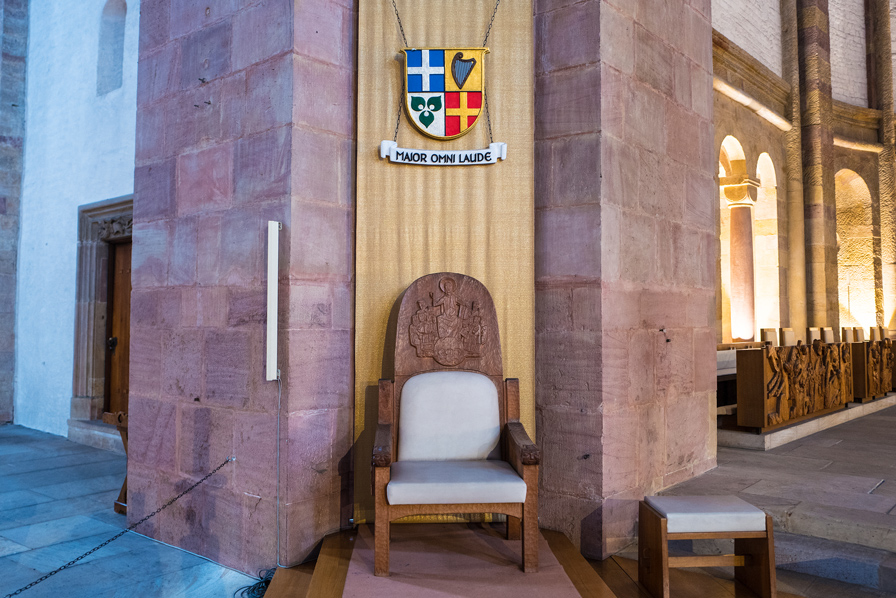 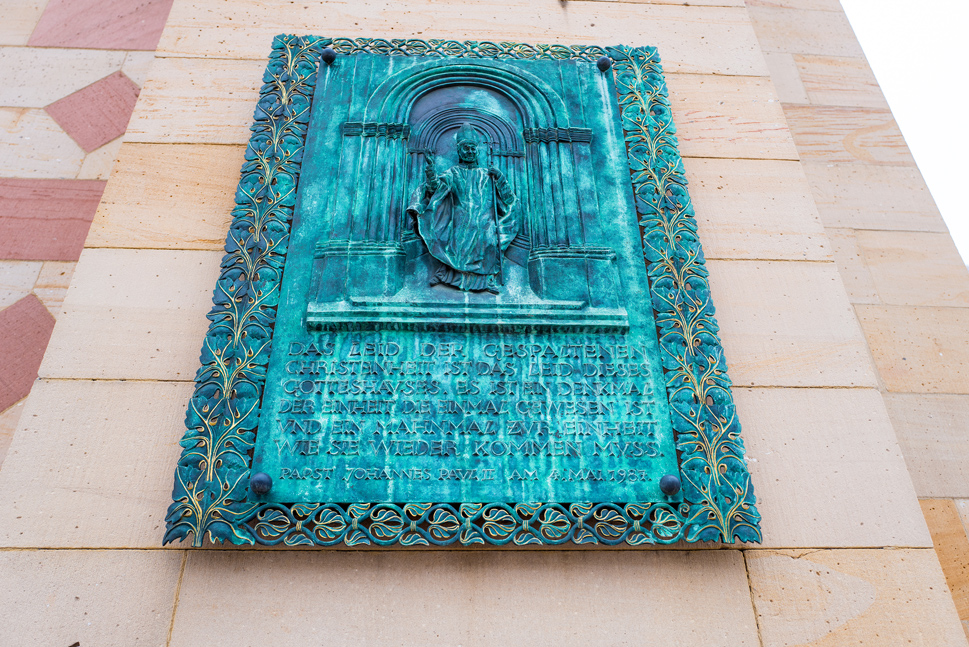 Today, Speyer Cathedral is not only the episcopal, but also the parish church of the cathedral vicarage. There are masses every day – more than 450 each year – smaller events like weddings or baptismal services not included. The imperial cathedral is both a pilgrimage church and tourist attraction. According to the cathedral chapter, it attracts about one million people each year. There are tours in English, French or Spanish as well as in Polish, Dutch and Japanese. Most visitors, though, come from German speaking areas – and, of course, from the Rhine-Neckar Metropolitan Region.

“A place which exudes great harmony”

Friederike Walter’s grandparents are from here, too. She grew up in the Palatinate region herself. Before the art historian returned to her home country in 2013, she amongst other things had worked at the theatre in Basel. A Protestant, she was impressed by her new task, by the size of the construction, by its “sobriety and serenity.”

Whoever visits Speyer Cathedral for the first time, expecting the flamboyant style and golden decoration of other well-known cathedral buildings, will be surprised. The interior indeed is modest and quite unadorned: High ceilings, audacious arcades and majestic pillars dominate the construction.

The cycle of frescoes on the walls of the central nave goes back to the 19th century. Church painter Johann Schraudolph dedicated the 24 frescoes showing scenes from the Old Testament to Mary. Above the front altar, the people’s altar, a huge crown hangs from the ceiling – symbolising the emperors’ tombs beneath: All Salian emperors but also Staufian and Habsburgian emperors were buried here. Behind the main altar, which is located in the apsis, with some distance to the first pews, a gigantic cross is the focal point of the visitors’ attention – exactly because not much else causes distraction.

The restrained adornment tells a story as Friederike Walter explains: In the Palatinate War of Succession in 1689, certain areas of the cathedral caught fire causing a large portion of the nave to collapse. In the 18th century, French revolutionist troops burnt parts of the interior – and much was lost. And thus the cathedral presents itself with a modesty which leaves space for only a few but then even more striking works of art: reliefs, memorial slabs, baptismal fonts, confessional boxes and the main organ.

Friederike Walter’s colleague Bastian Hoffmann has known the cathedral since his childhood: born in Speyer, for him it is “a wonderful part of home.” This church was a “fundamental European monument,” as the Romance philologist and business economist says. Given its course through the centuries it took on a typical European significance: “the juxtaposition of unity and fragmentation.”

Bastian Hoffmann is head of the visitor management, and he has a favourite place in the cathedral which he likes to show visitors most of all: the crypt with the emperors’ tombs. It is the oldest part of the church, almost rectangular chambers are structured by majestic pillars and circular columns. The pillars reaching up to the ceiling with a height of approximately seven metres. The faint light creates a mysterious atmosphere. In spite of the coldness outside, temperatures are astonishingly mild in here, the sandstone retains warmth. “A place which exudes great harmony,” Bastian Hoffmann says. It has not always been harmonious, though. French troops pillaged the tombs during the War of Succession. When they were opened in 1900 it emerged that at least the Salian tombs had on the whole been spared. Experts think that the troops had to leave the church hastily. The funerary objects can be admired in the “Historisches Museum der Pfalz” (Historical Museum of the Palatinate) next door. The mortal remains of the emperors now rest in the newly built emperors’ vault.

Today, you can visit the cathedral digitally. The website kaiserdom-virtuell.de shows the edifice in a 360-degree view. A special feature with which the initiative makes the UNESCO World Heritage site accessible for people at very different places of the world. “Only the original is more impressive,” it says here. And this is very much to the point: Only someone who was really there knows just how impressive modesty and silence can be – at a uniquely historical place.