Georg Wiedemann knows how to breathe new life into old things. His family has run the Doktorenhof estate in the Southern Palatinate municipality of Venningen for centuries. He took over the business at age 17 and began to make vinegar from wine—the traditional way, by hand and taking plenty of time. It has become a success story.

With his hands buried deep in his pockets, Georg Wiedemann takes the stairs and descends into the vaulted cellar of the Doktorenhof estate. For generations, his family has matured wine in wooden barrels here in the “Sacrosanctum”—the most sacred place in the estate. “Schorsch” Wiedemann, as they call him in Venningen, takes a deep breath in, flaring his nostrils. He soaks the weighty sourness in. “Down here, there is nothing but acetic bacteria, the air is totally clean,” says Georg. 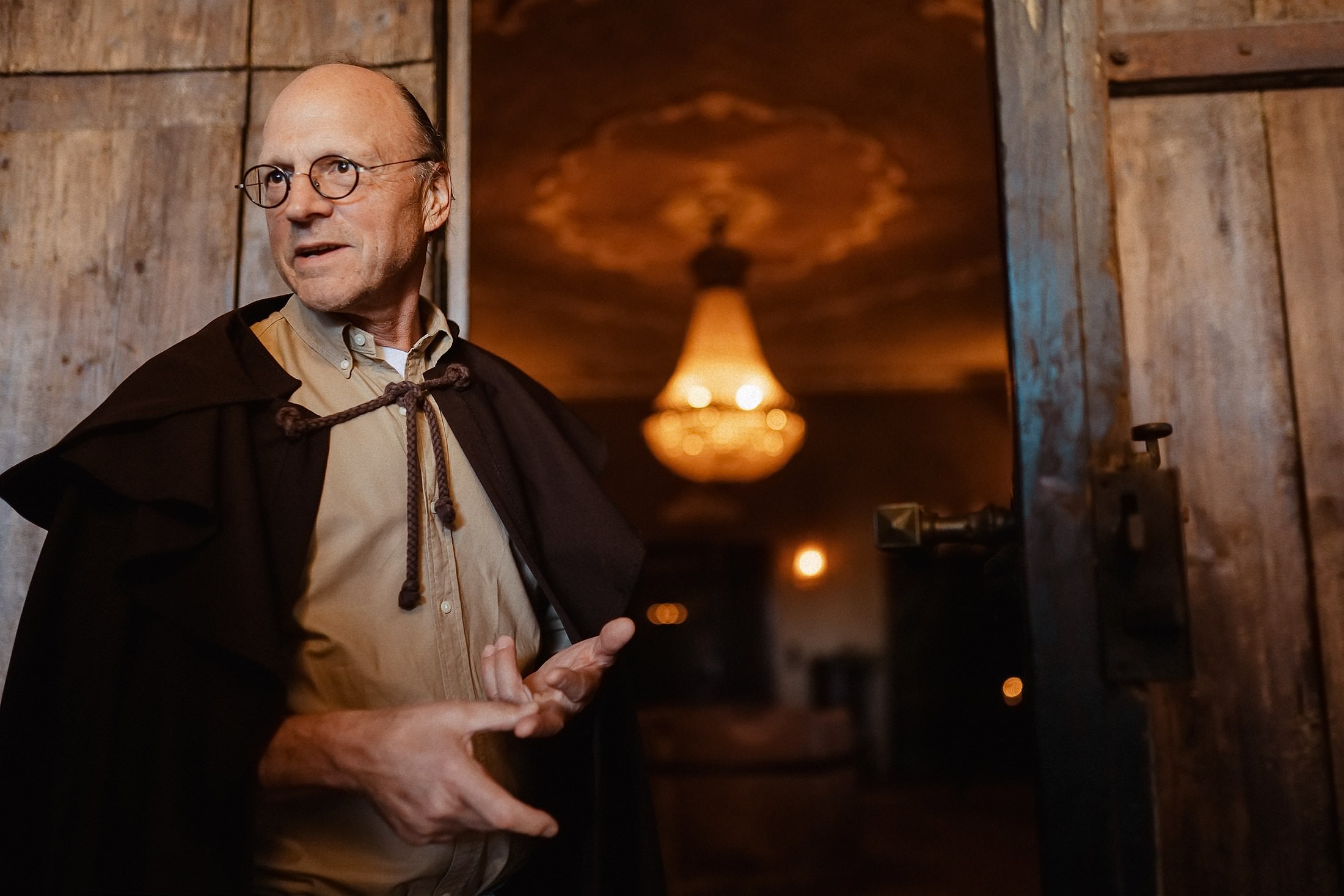 “I love my job, because I know it is a very old trade”, says Georg Wiedemann.

The 64-year-old puts a habit on and laces the cord just below his neck. “We dress in habits to protect the bacteria—against the aromatic substances of our perfumes or other vapours.” The groups he guides through the cellar also have to put on such habits before Georg opens the heavy door, behind which the barrels are stored in the candlelit cellar. These groups of visitors comprise tourists from the US or China and business clients, who work in the region, as well as day trippers and top chefs, who use Georg’s vinegars in their restaurant cuisines. 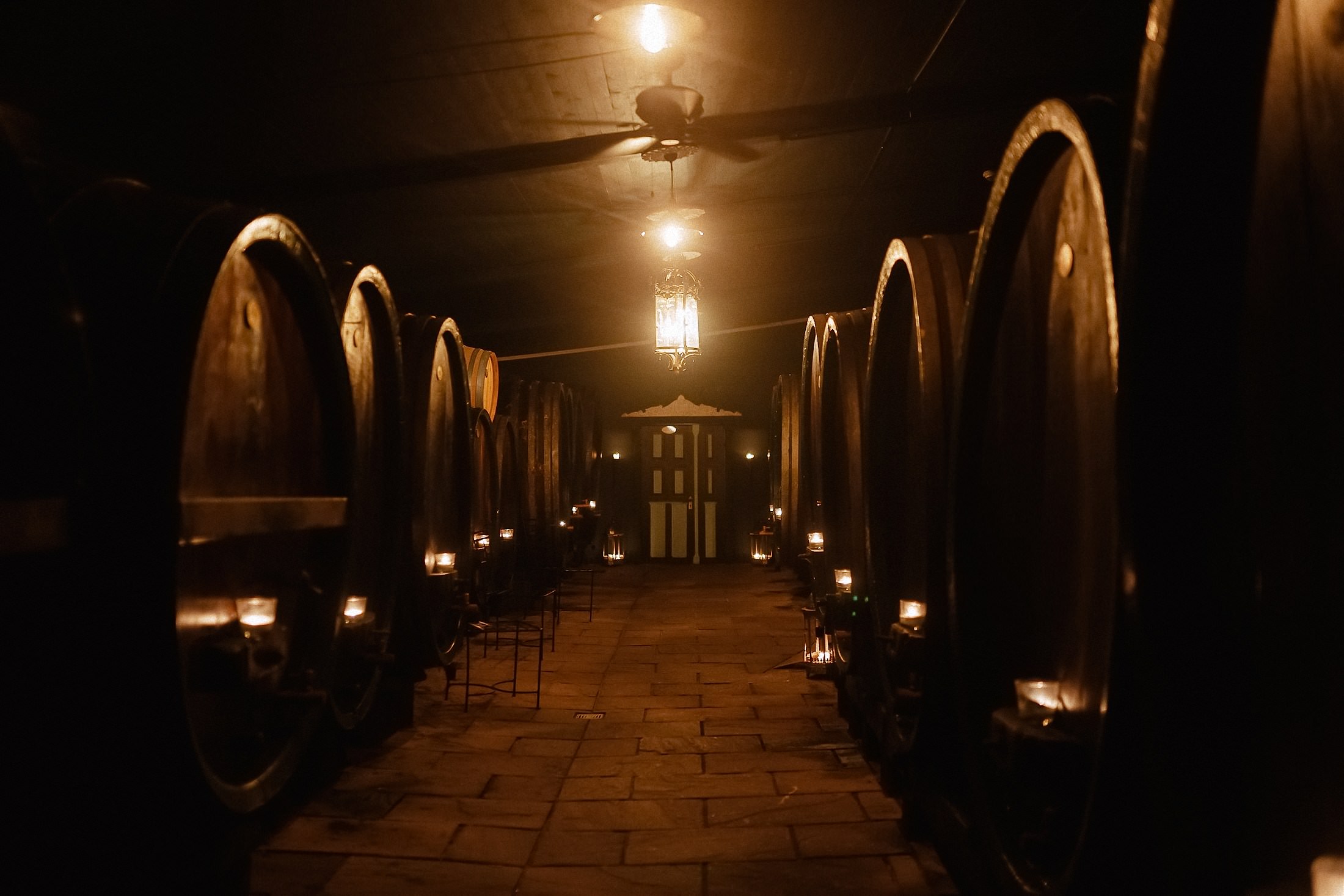 The “Sacrosanctum”—the most sacred place in the estate.

“After a certain time in the cellar you are able to breathe freely again,” he says. And to smell. Vinegar has an expectorant effect. “It has been recognized for its therapeutic properties for thousands of years. Many historic personalities knew about it.” Roman chroniclers reported on miraculous cleaning with vinegar in the ancient world. Vinegar washing has also been reported about the Renaissance era. 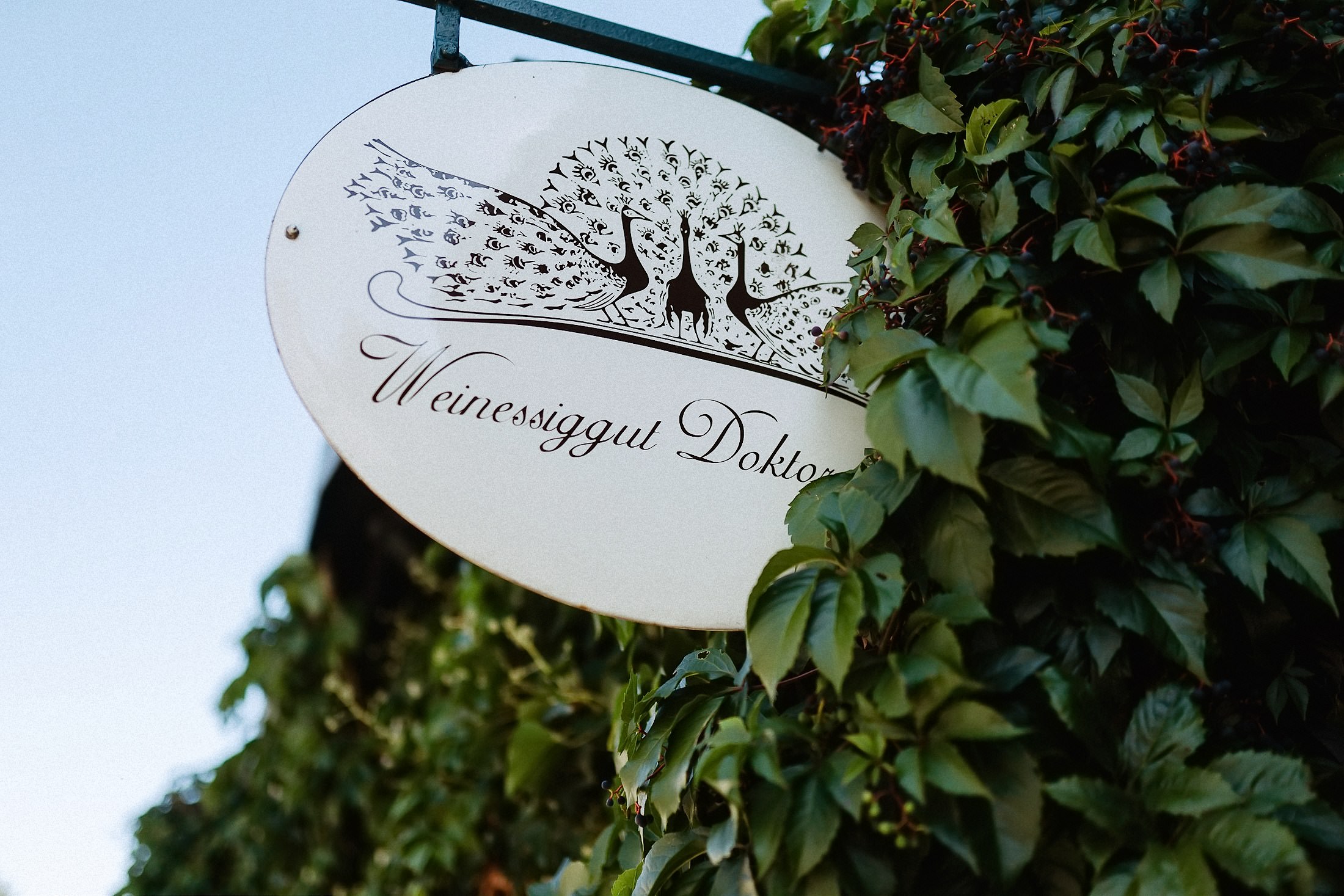 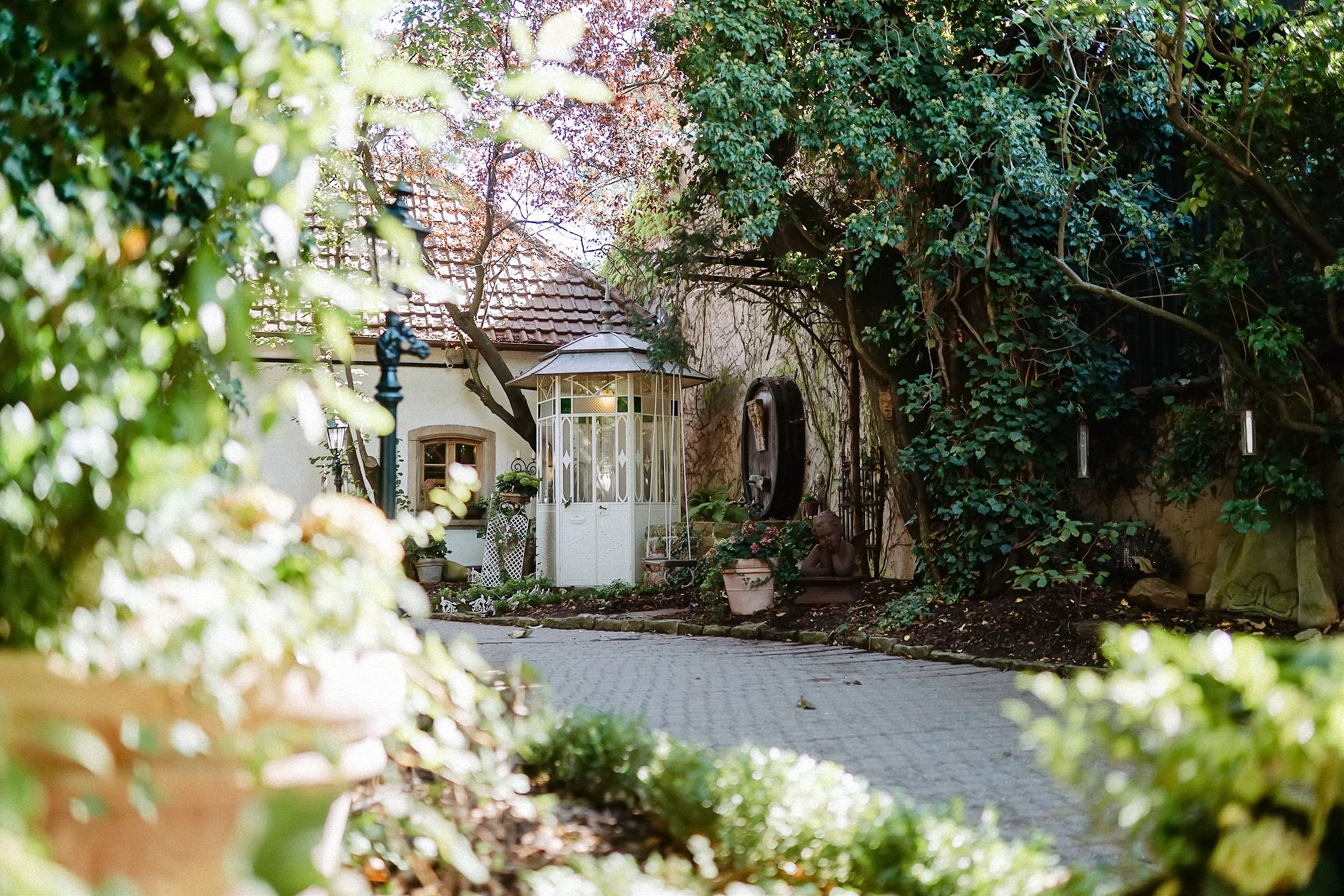 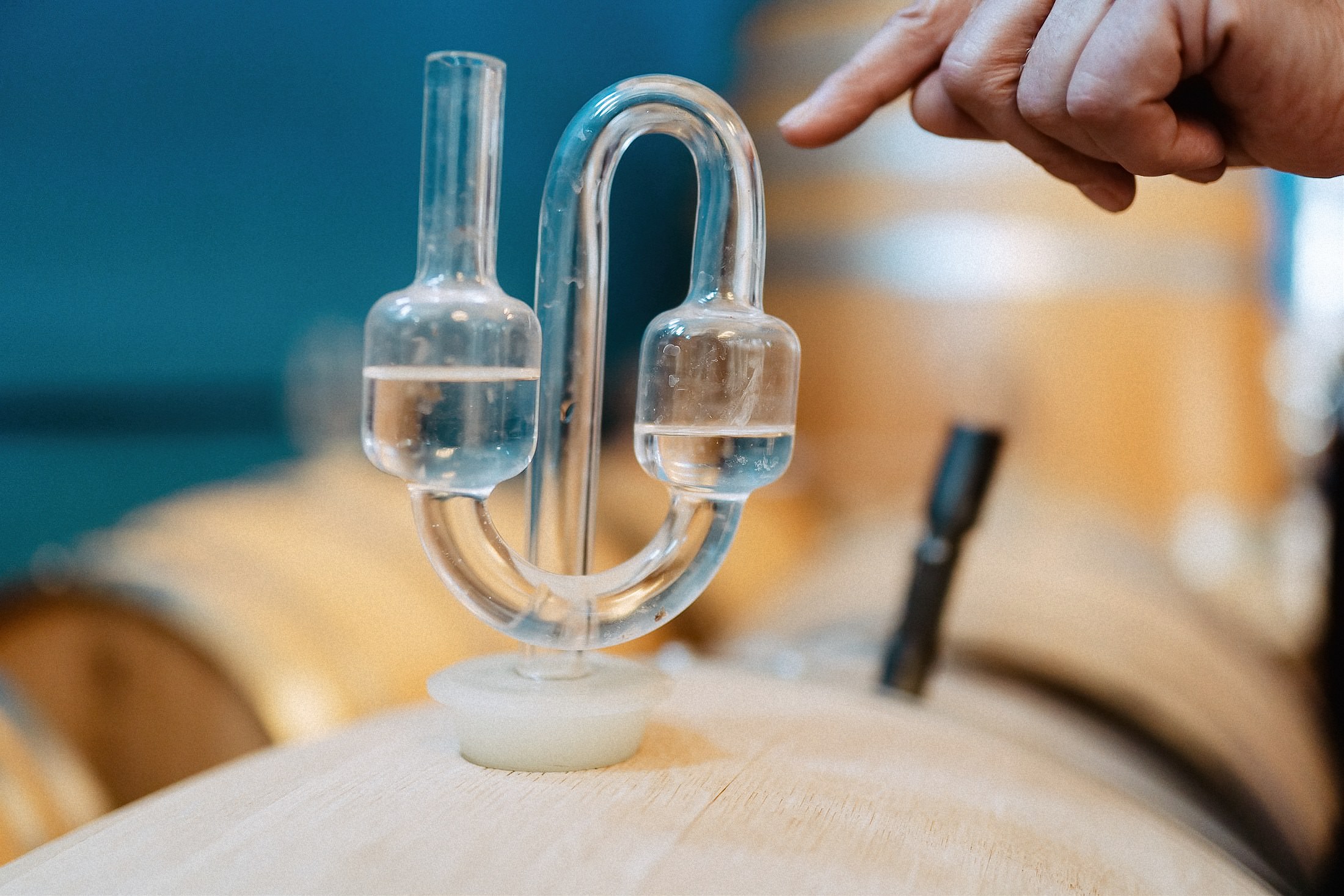 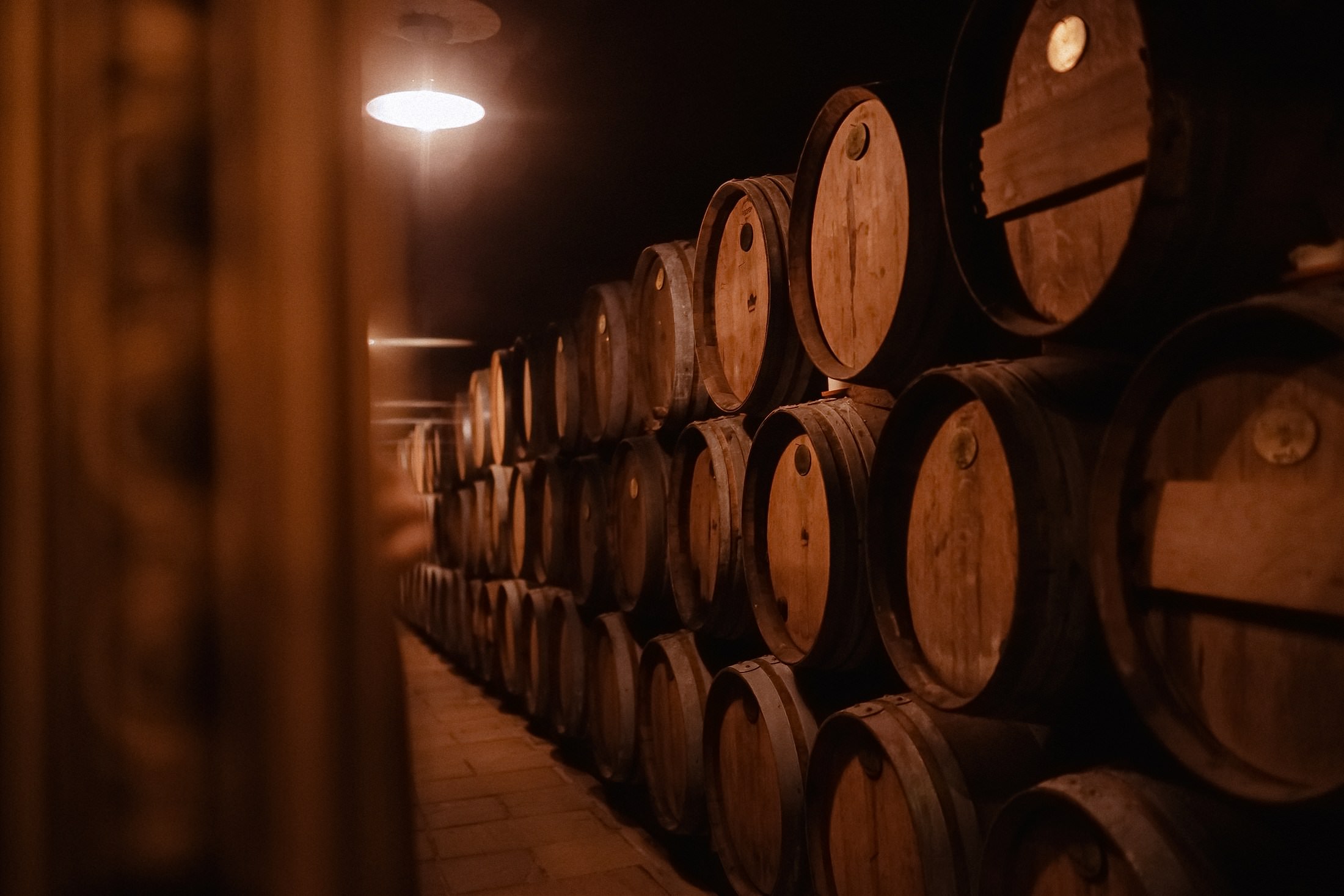 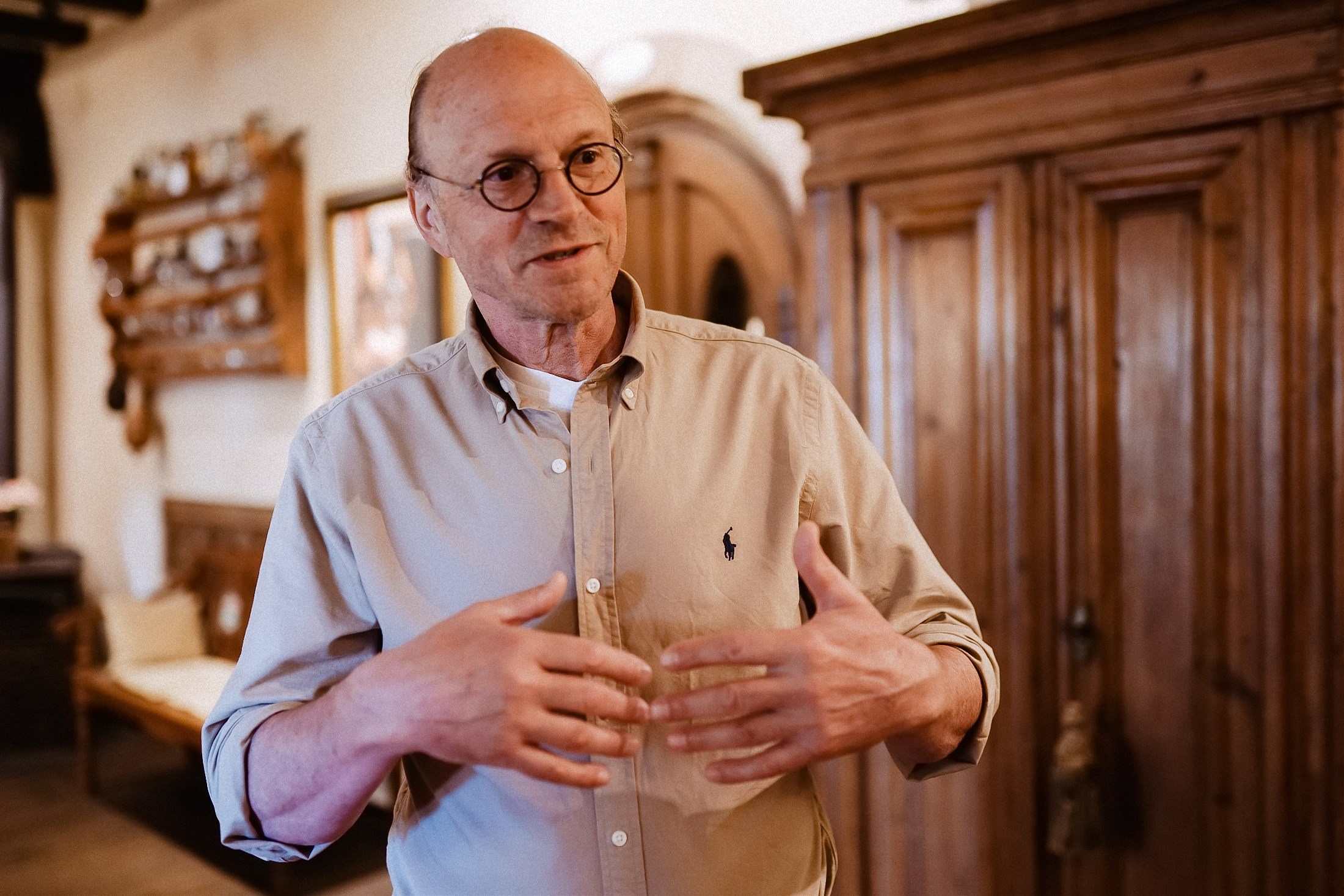 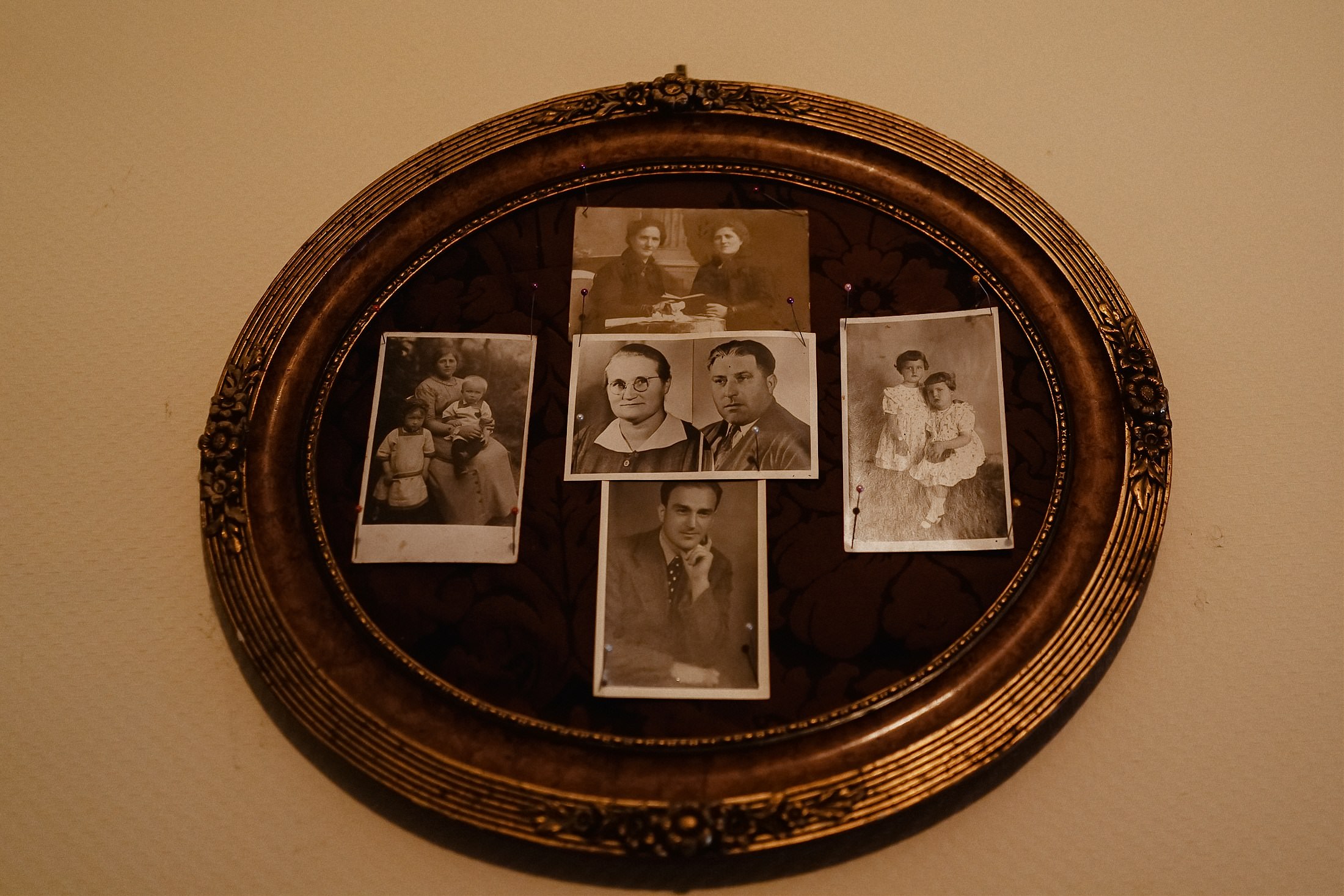 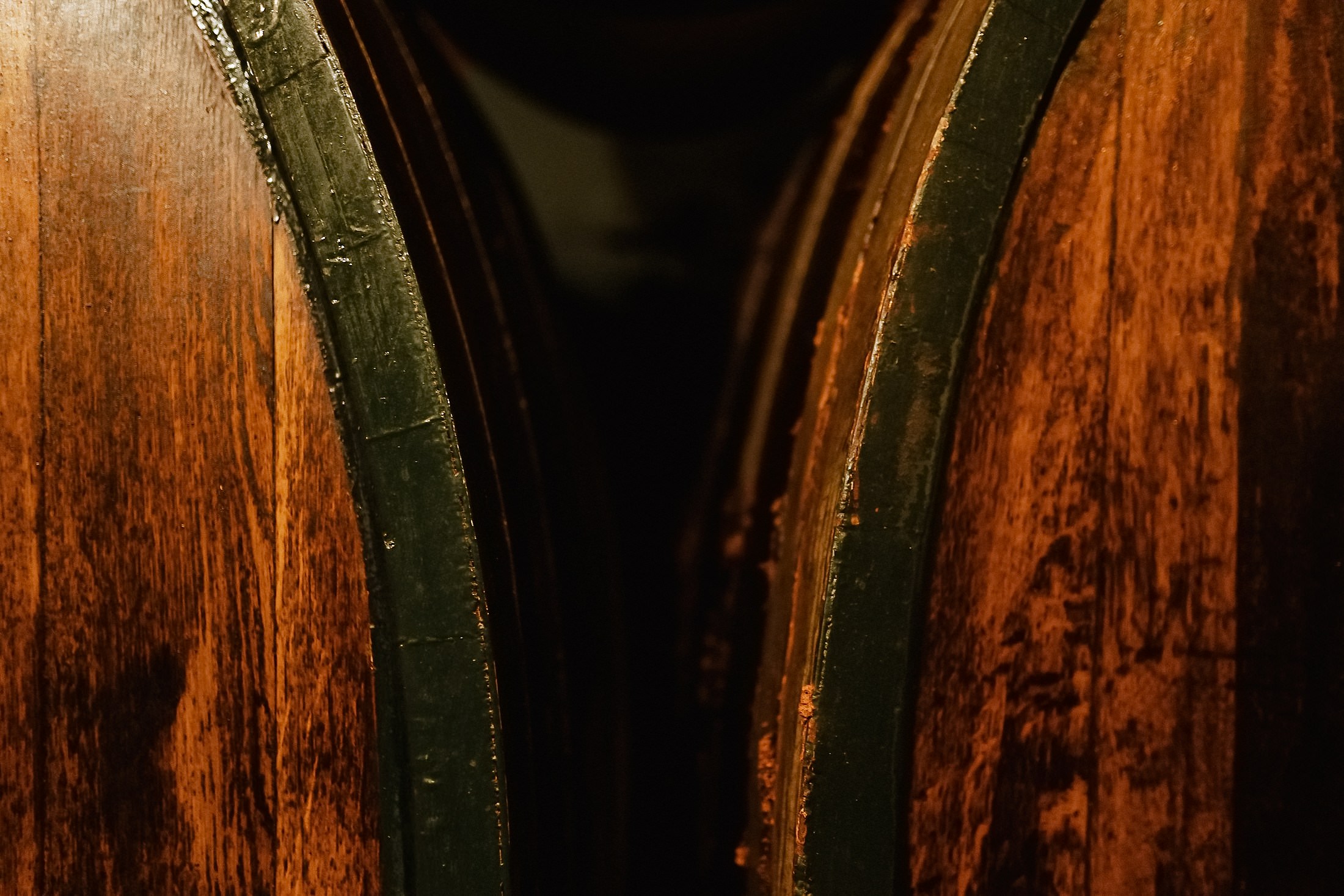 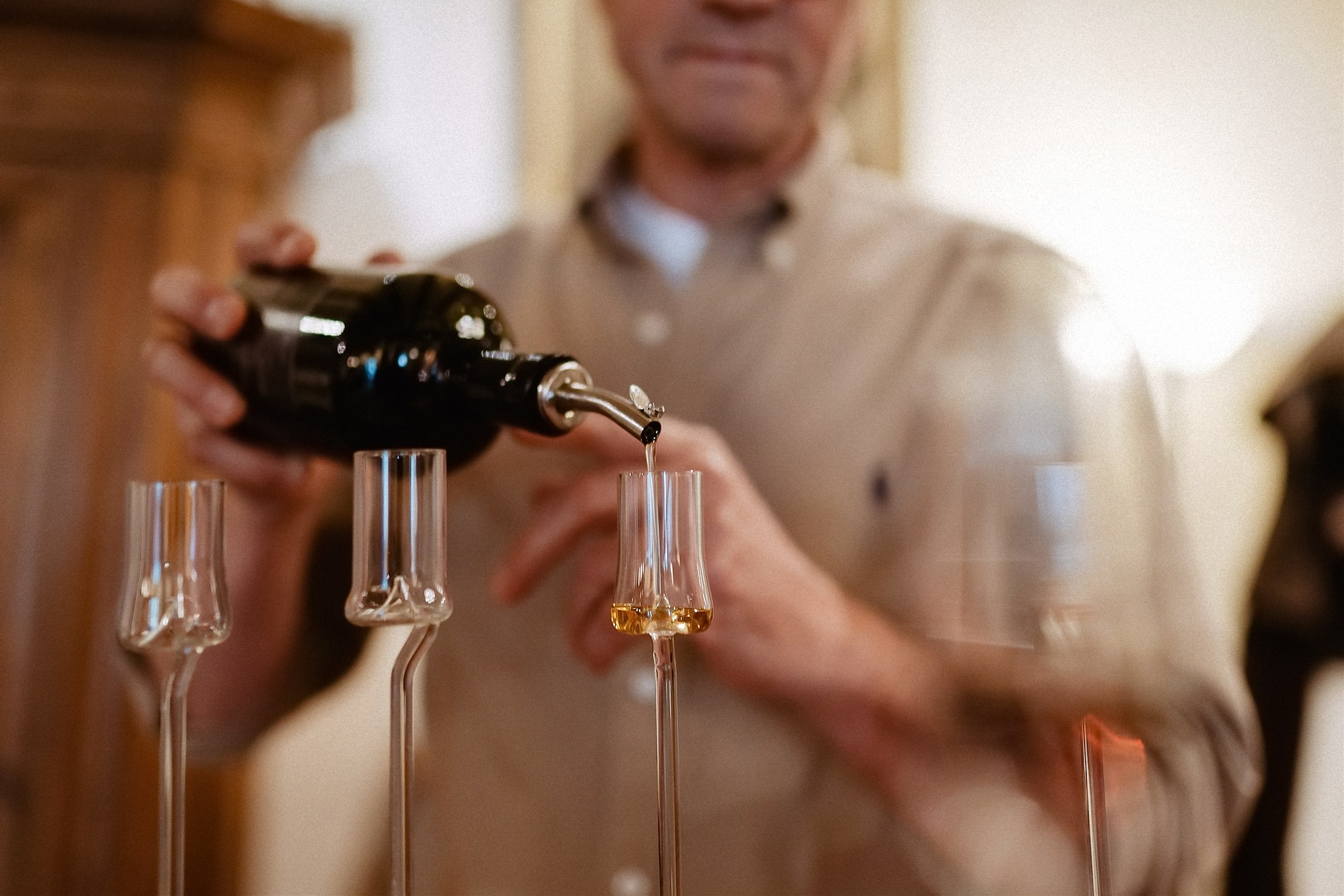 “Vinegar warms the body from within and generates a great richness inside it. It acts as a stimulant and cleans,” says Georg laying his hand on one of the wooden barrels. Inside, there is Riesling, Gewürztraminer, Pinot noir and Ortega—which are all in the process of fermentation. The barrels are only half full, because “vinegar needs oxygen. It must oxidize.”

“Every wine will turn into vinegar sooner or later anyway. Except when it is drunk beforehand”

Here, the fermentation process from wine to vinegar takes place spontaneously, without adding yeast species and only through enrichment with “mother of vinegar”: self-bred acetic acid bacteria that decompose the alcohol and help convert it into acetic acid. “Every wine will turn into vinegar sooner or later anyway. Except when it is drunk beforehand,” says Georg laughing. The wine matures in the first room of the cellar vault for 15 months and completes some stages of the fermentation process there. 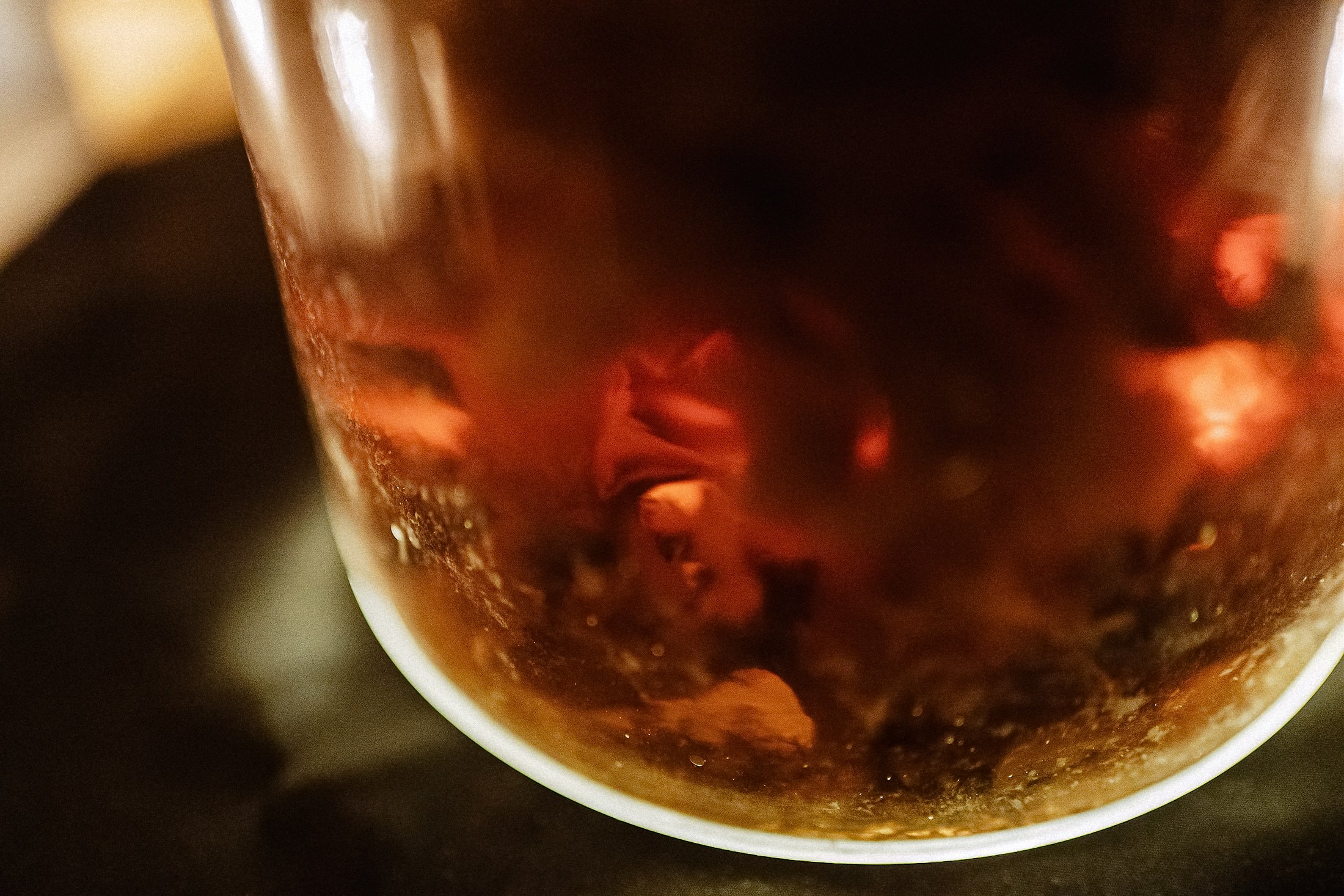 The “mother of vinegar”: self-bred acetic acid bacteria that decompose the alcohol and help convert it into acetic acid.

The Doktorenhof estate start their grape harvest late when the vineyards surrounding it have already become unoccupied. When the grapes have nearly become raisins. This is because their juice is particularly sweet in this stage. Once harvested, the grapes are put into a steel winepress—a reproduction from the 16th century. It presses the grapes one single time, from the top to the bottom. The pressing process takes place slowly and only with little pressure, squeezing less tans and bitter principles out of the kernels. In this way, the wines and vinegars to be produced do not taste so dry. 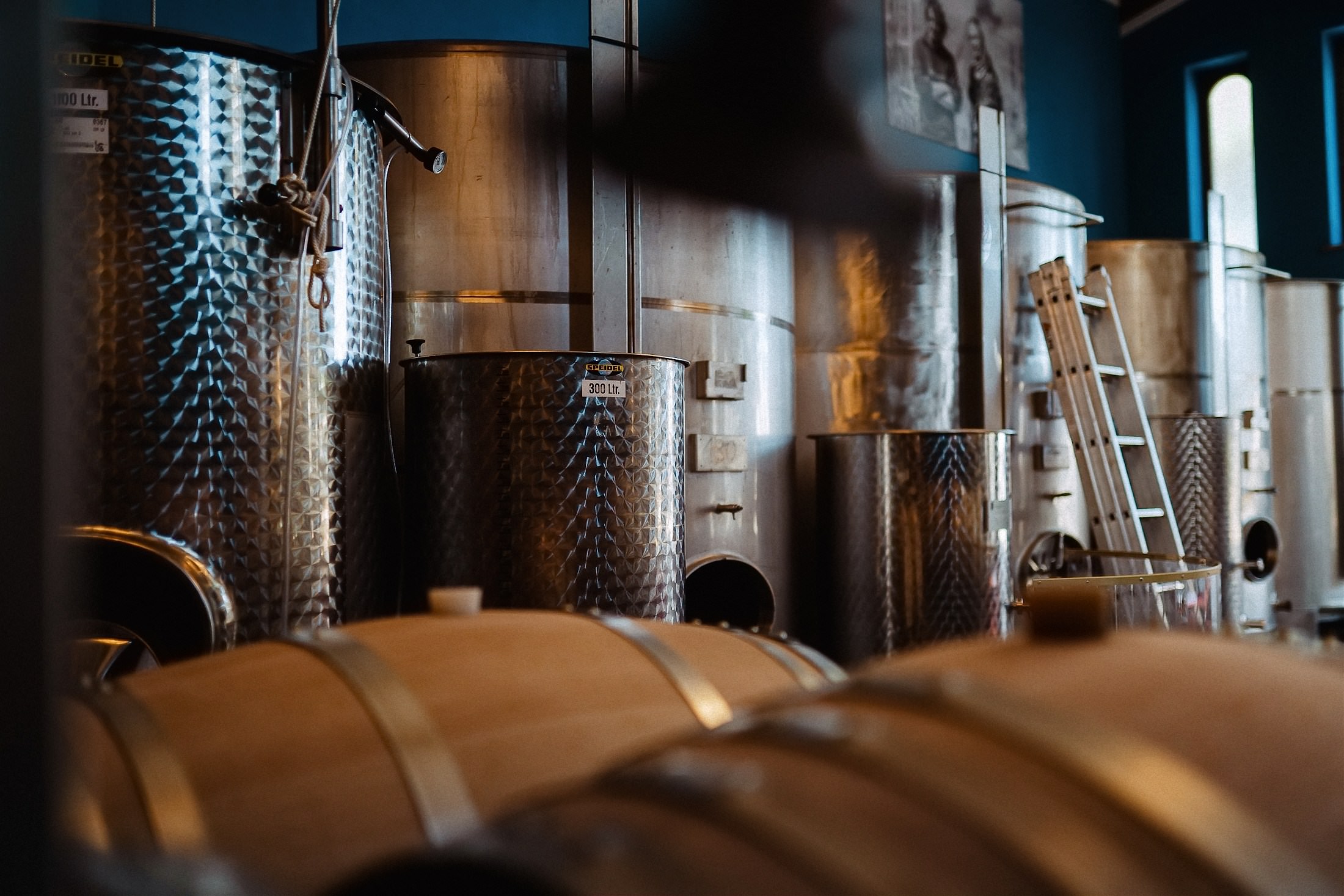 “We are very committed to tradition and want to live by it. At the same time, we live in the present and need modern equipment as well. This is an exciting blend,” says Georg.

Steel vessels are lined up next to the press in the hall, which is flooded with light. “We are very committed to tradition and want to live by it. At the same time, we live in the present and need modern equipment as well. This is an exciting blend,” says Georg. Large black-and-white photographs on canvas decorate the cobalt-blue coloured walls of the hall: pictures of the family. Georg’s granddaughter Ariane. His son-in-law in the vineyard. The family history is closely connected to the Doktorenhof estate and its vineyards. The family is mentioned for the first time in old registers around 1600, a few decades after the first “Doktor” had given the estate its name: Florenz von Venningen. Georg explains: “I love my job, because I know it is a very old trade. My great-grandparents and my grandfather and grandmother live on through this work and my daughter Cathrin has continued it with the same awareness.” Eleven persons work on the estate, some of them have done so for over 30 years. The Doktorenhof team don’t want to grow—Georg is contented with what he has. 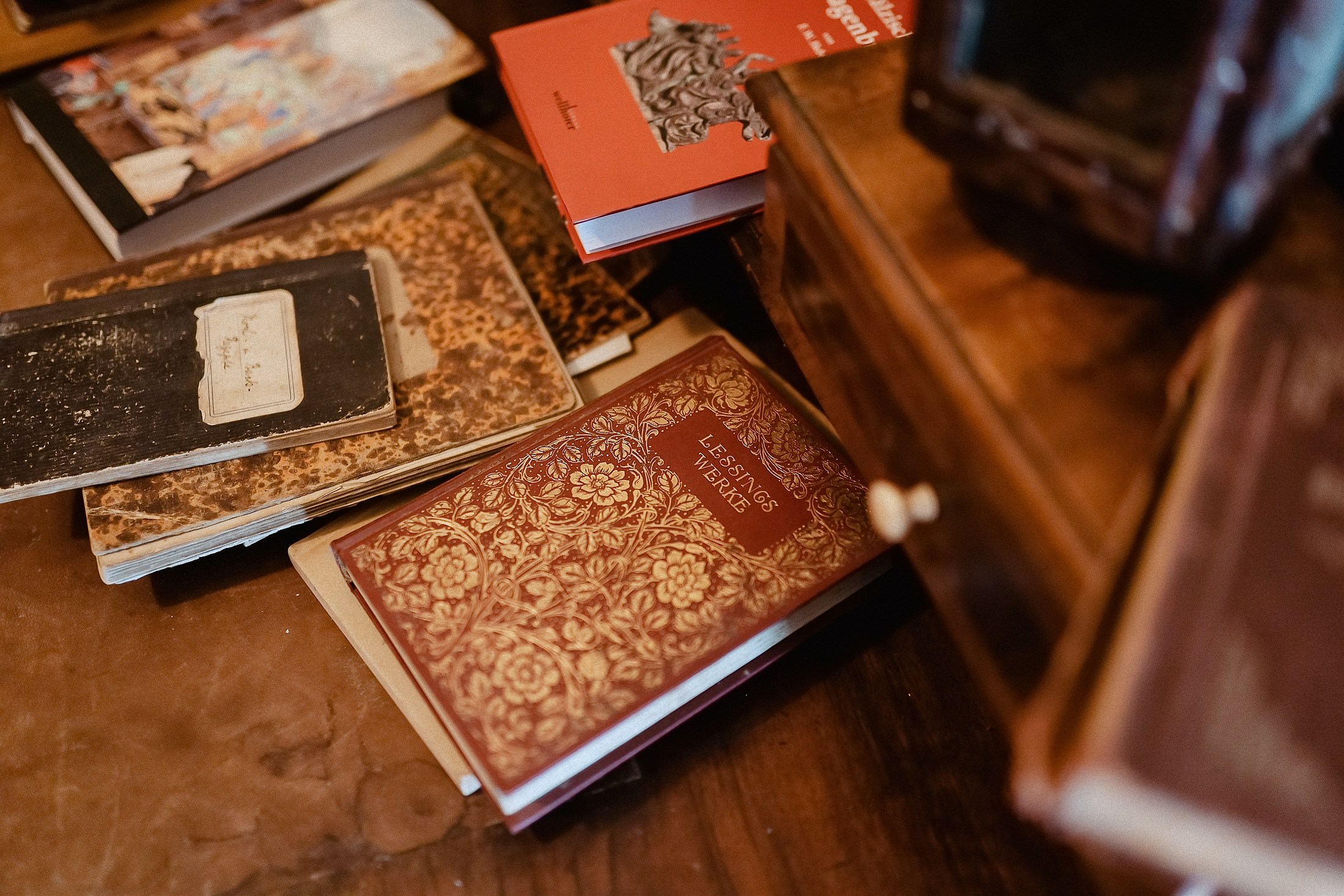 Georg is fascinated by objects and topics concerning the theme “old”.

He is fascinated by objects and topics concerning the theme “old” anyway: old buildings, old books, old handwriting. He can handwrite Sütterlin and sifts through flea markets for antique things. He cultivates the mysterious. Gregorian chant reverberates through the cellar vault—sounding a background choir for the sour drops that are filled in little Barrique barrels after about a year. The wine stays here for five to eight years, keeps fermenting and absorbs tans from the wood. It takes up to ten years for the vinegar to be completed. With conventional methods, you can produce vinegar aromatized with herbs in two to three days. Only a few manufacturers in the world undertake vinegar production using the method in the Doktorenhof. 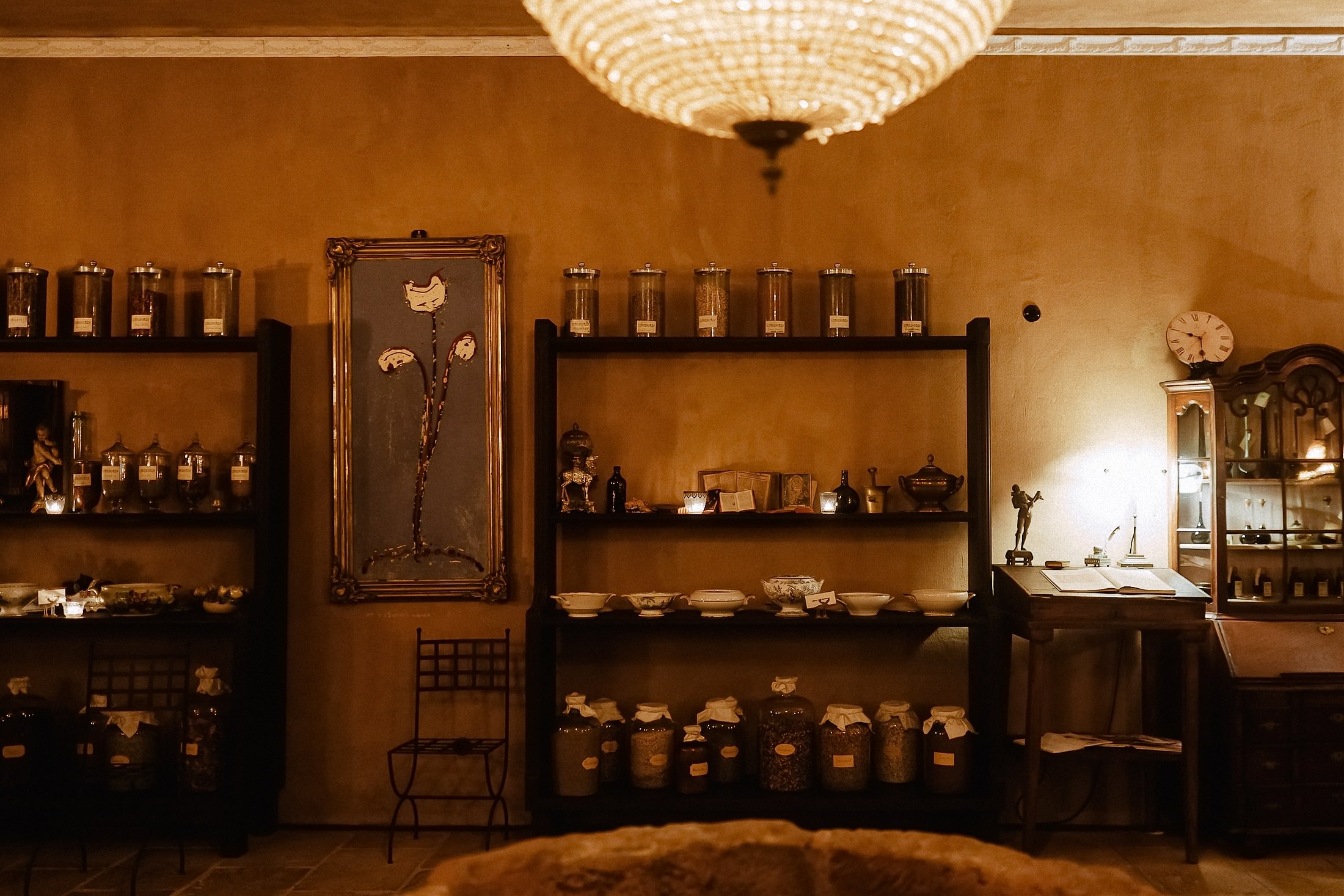 Georg opens the door to the herbs chamber. Visitors to the cellar vault can walk along glasses filled with Patchouli, Jasmine and Epilobium. The walls are decorated with floral patterns on canvas painted by Georg—with vinegar and oil, of course, and with the addition of colouring pigments. In the rear part of the estate there is another herbs chamber, the real one. It is stacked with boxes full of herbs: ginger from China, vanilla pods from the Seychelles, sage from Saudi Arabia. Georg has chosen the producers carefully, many of which he found on his journeys. The most expensive spice in the chamber is, however, cultivated by the Wiedemann family themselves: saffron. They harvest 1.2 kilogramme saffron per year from 170.000 flowers. “Cultivation of this spice has a long tradition in the Palatinate. It tastes more fruity and less musty than the Persian saffron, because of the loess loam soil in the region.” 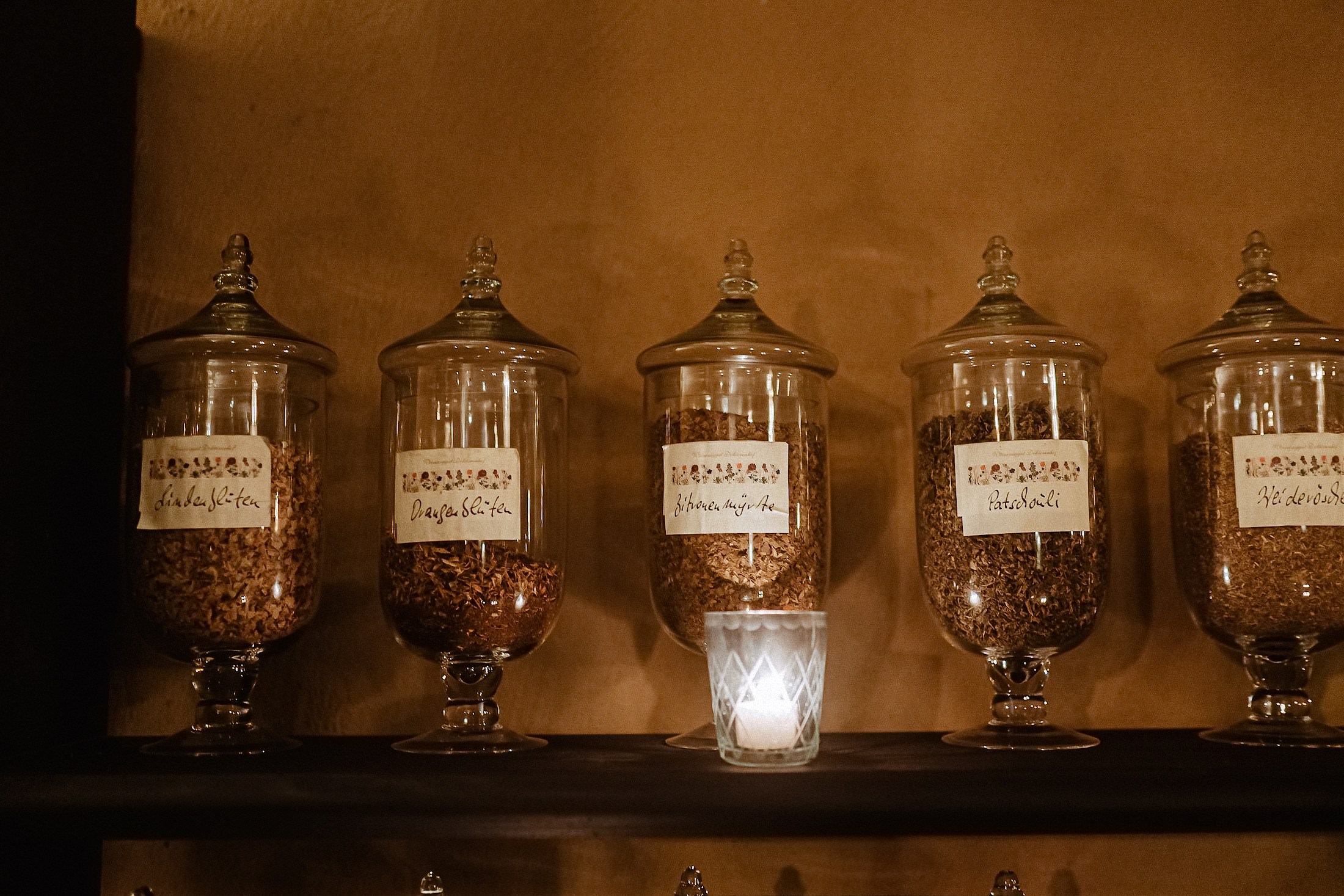 In his herbal kitchen, “Schorsch” transforms the fermented wine into the most exquisite vinegar. He has some 45 different types to offer and the entire range comprises over 200. Two to three new varieties are added to the product range every year. Georg’s varieties have names such as “Zitronenbraut” (lemon bride), “Engel küssen die Nacht” (angels kissing the night) or “Vatermörder” (patricide), the latter of which caused him some distress: “I kept throwing it aside and taking it out over and over again.” This variety unites 19 bitter Picris herbs. The heart notes are star anise, clove and cinnamon. The top note is cardamom. “Patricide” tastes of Christmas with a warm and spicy edge. This variety, as all the others, will soon bring about another vinegar fairy-tale to be told in Venningen restaurants and to be found in Georg’s cooking and fairy-tale book. In fact, “we develop new things from something that is actually very, very old.” 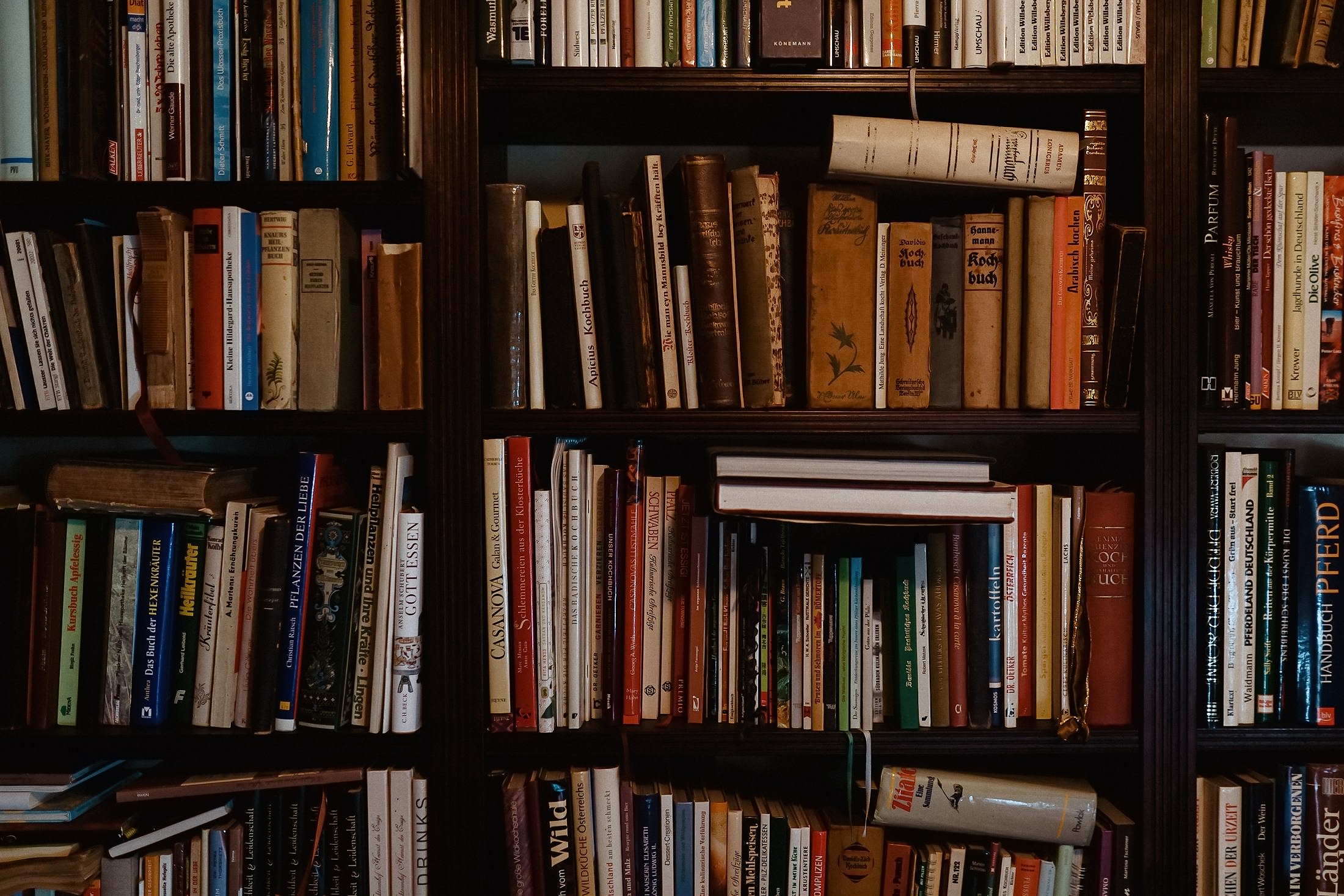 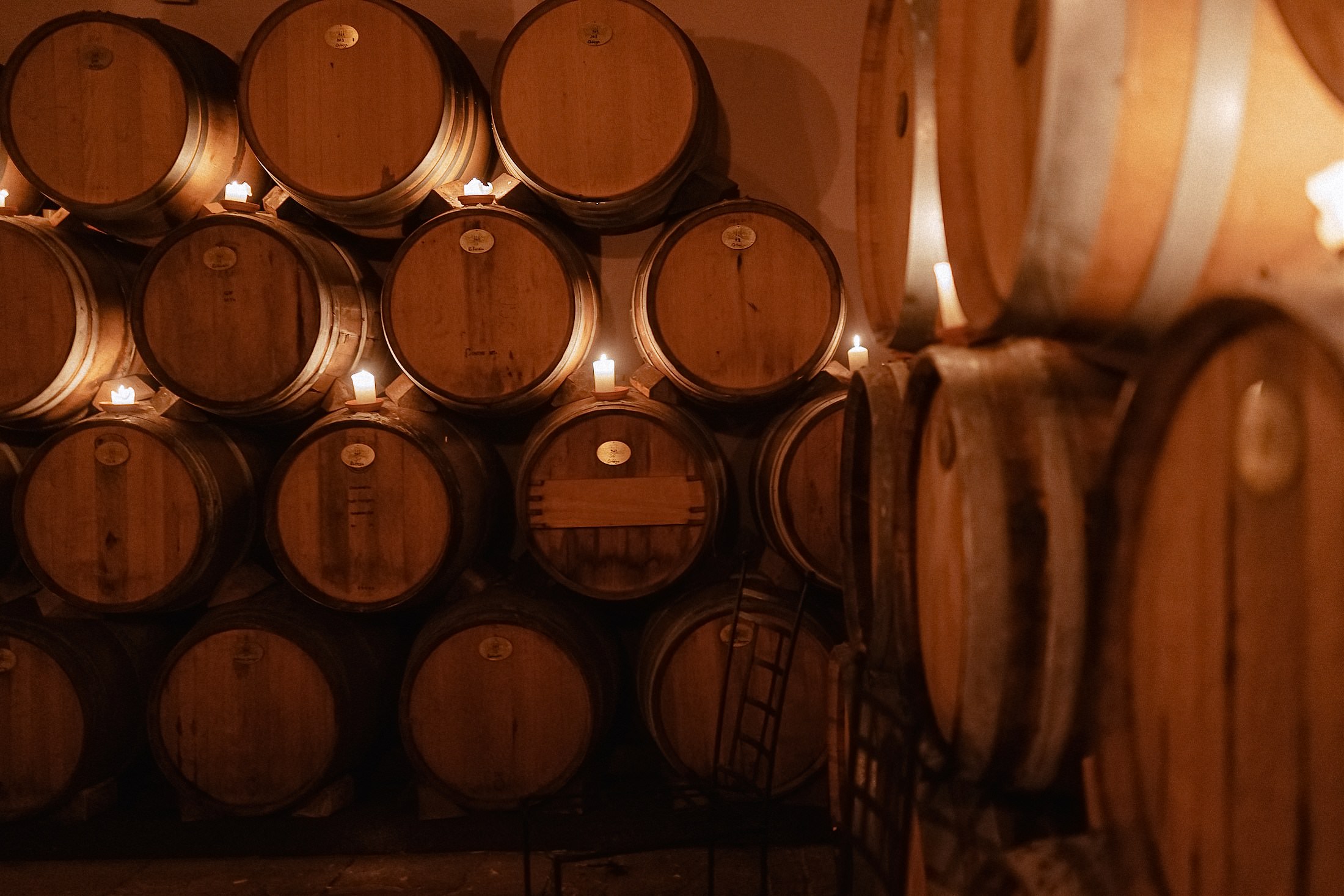 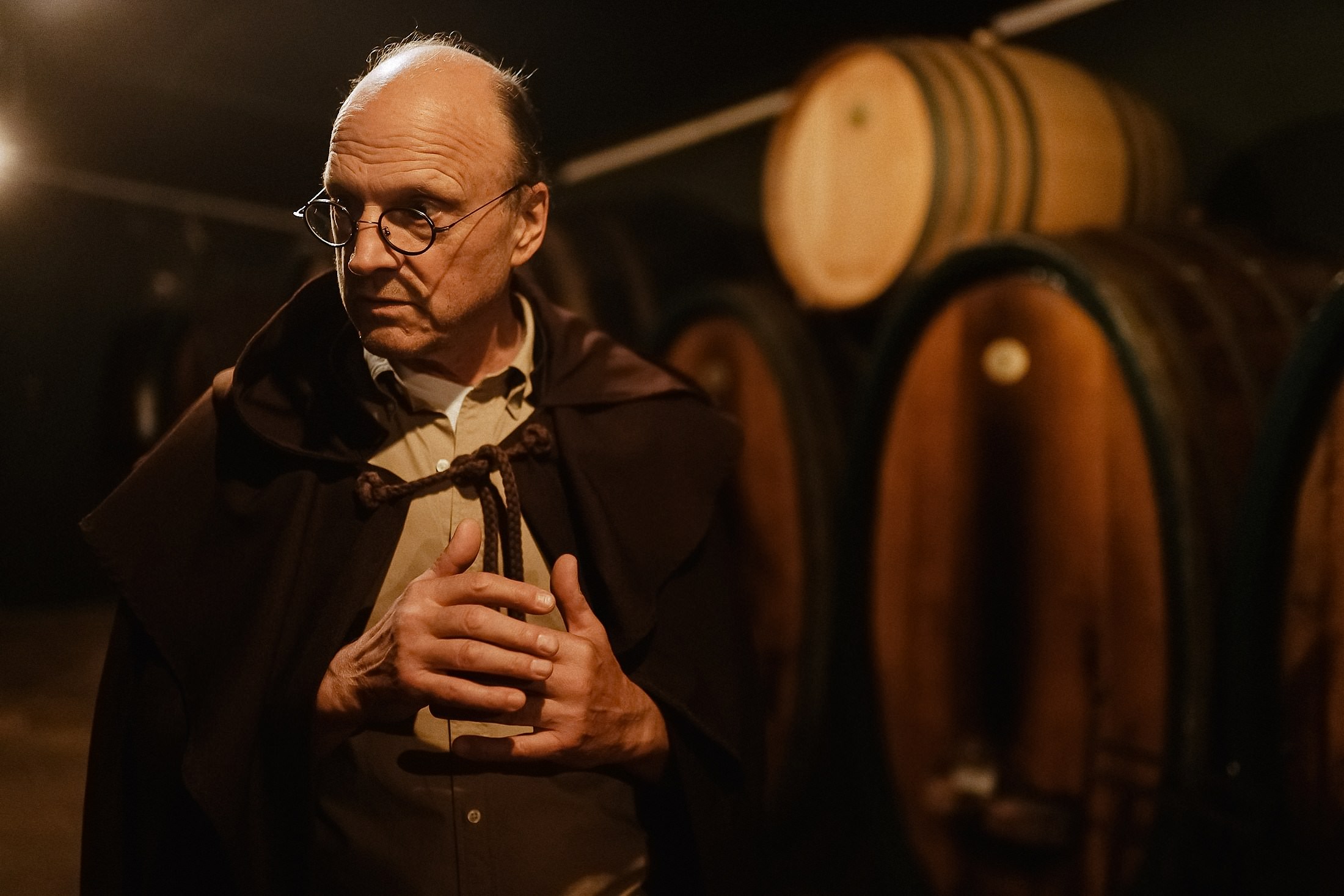 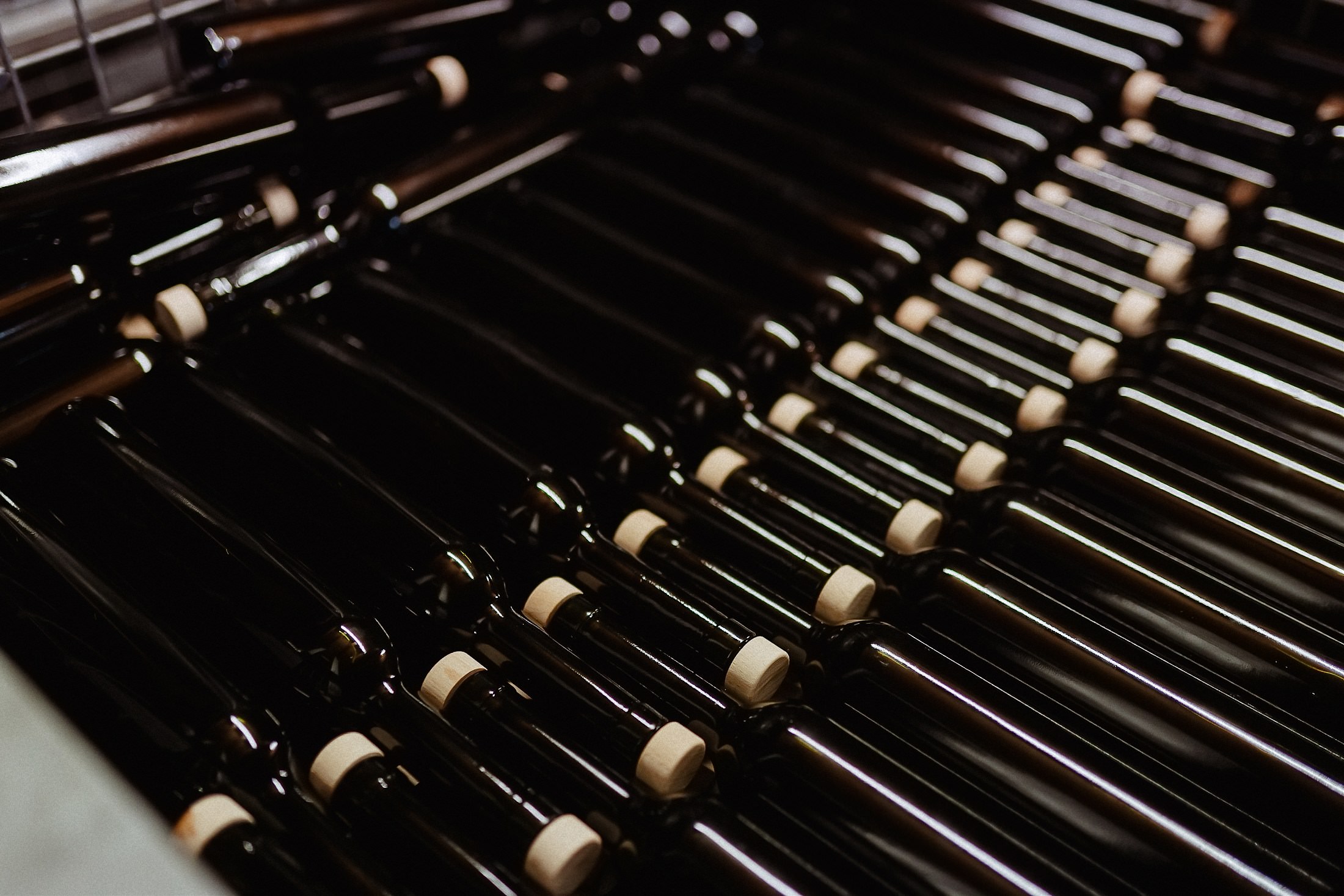 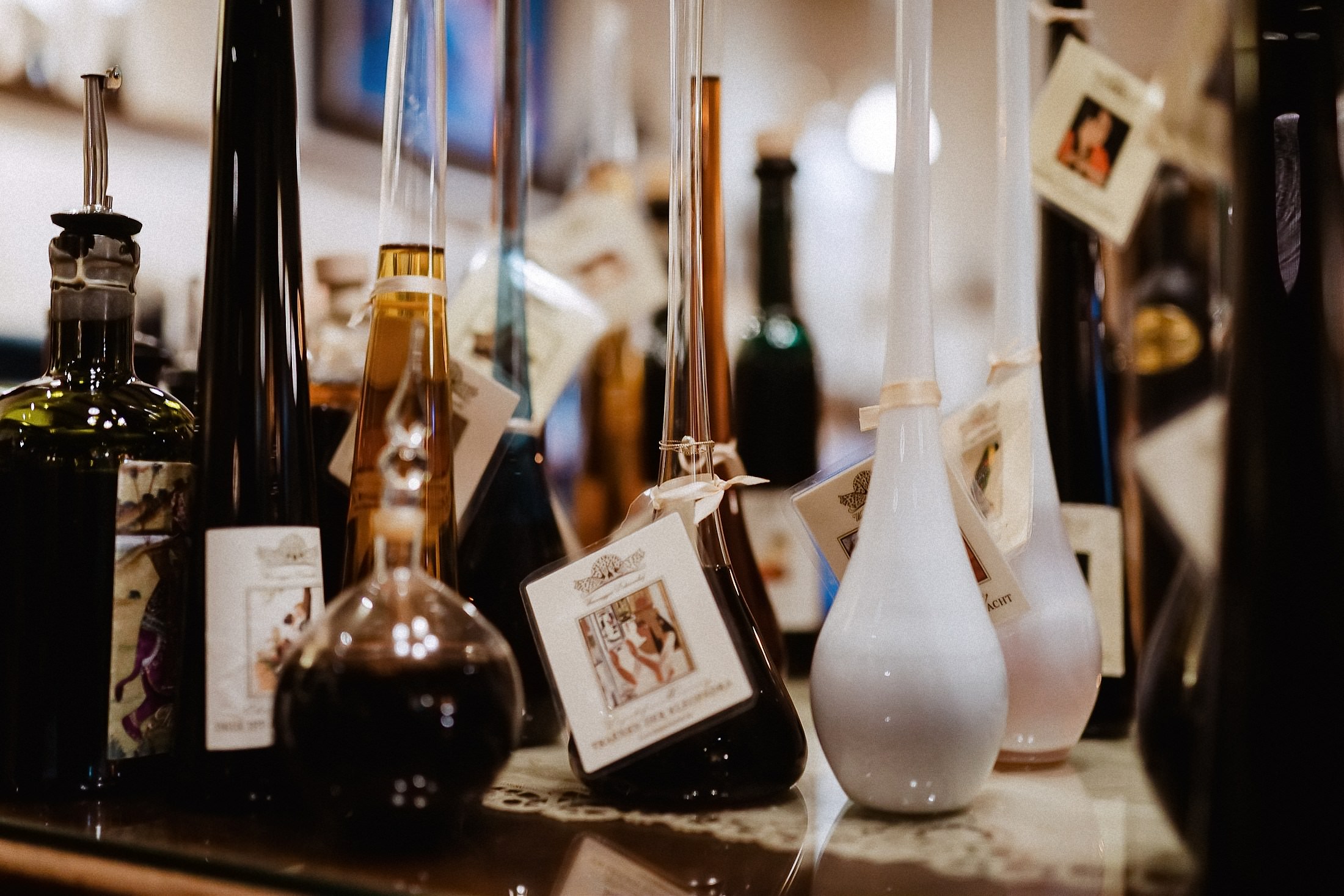 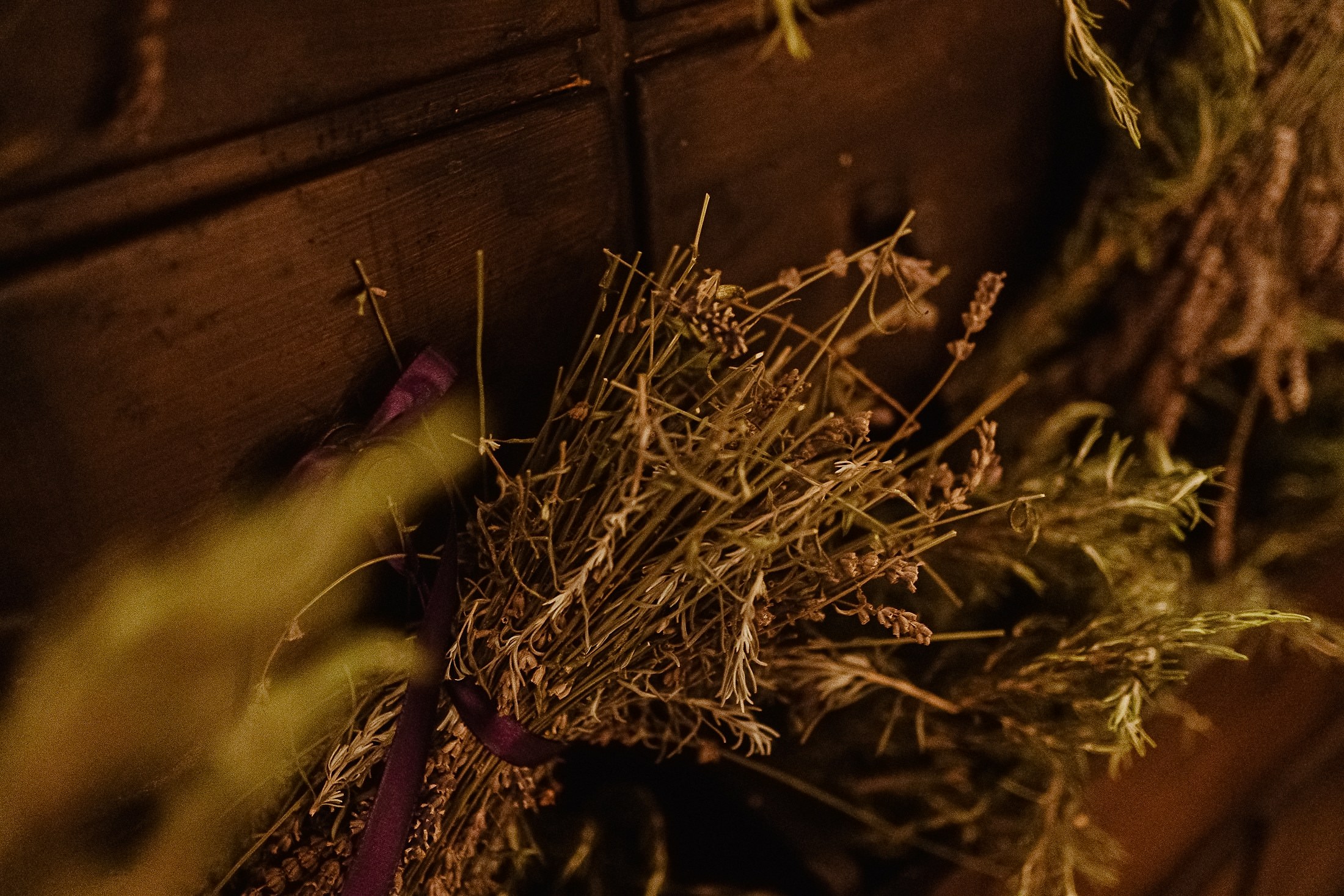 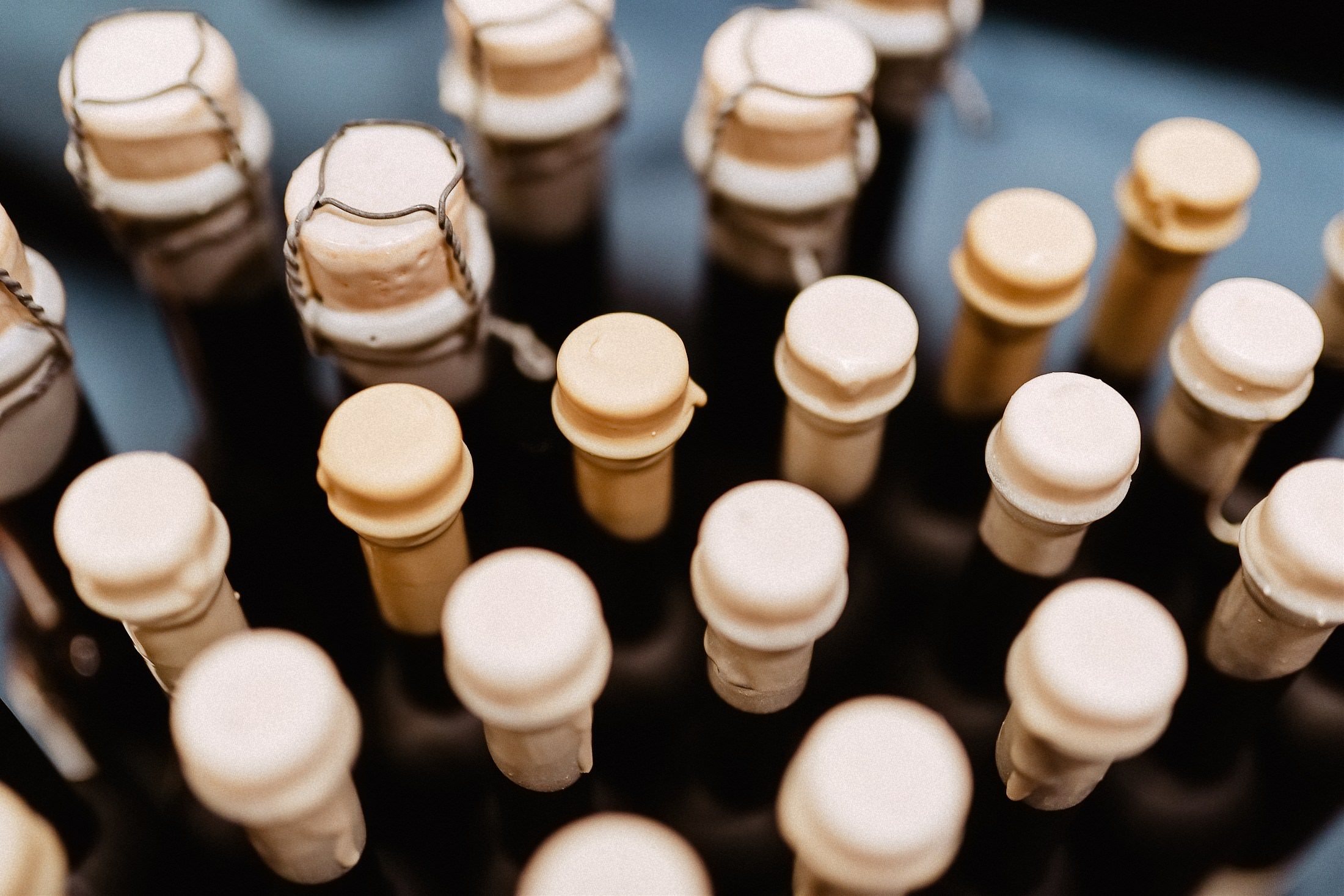 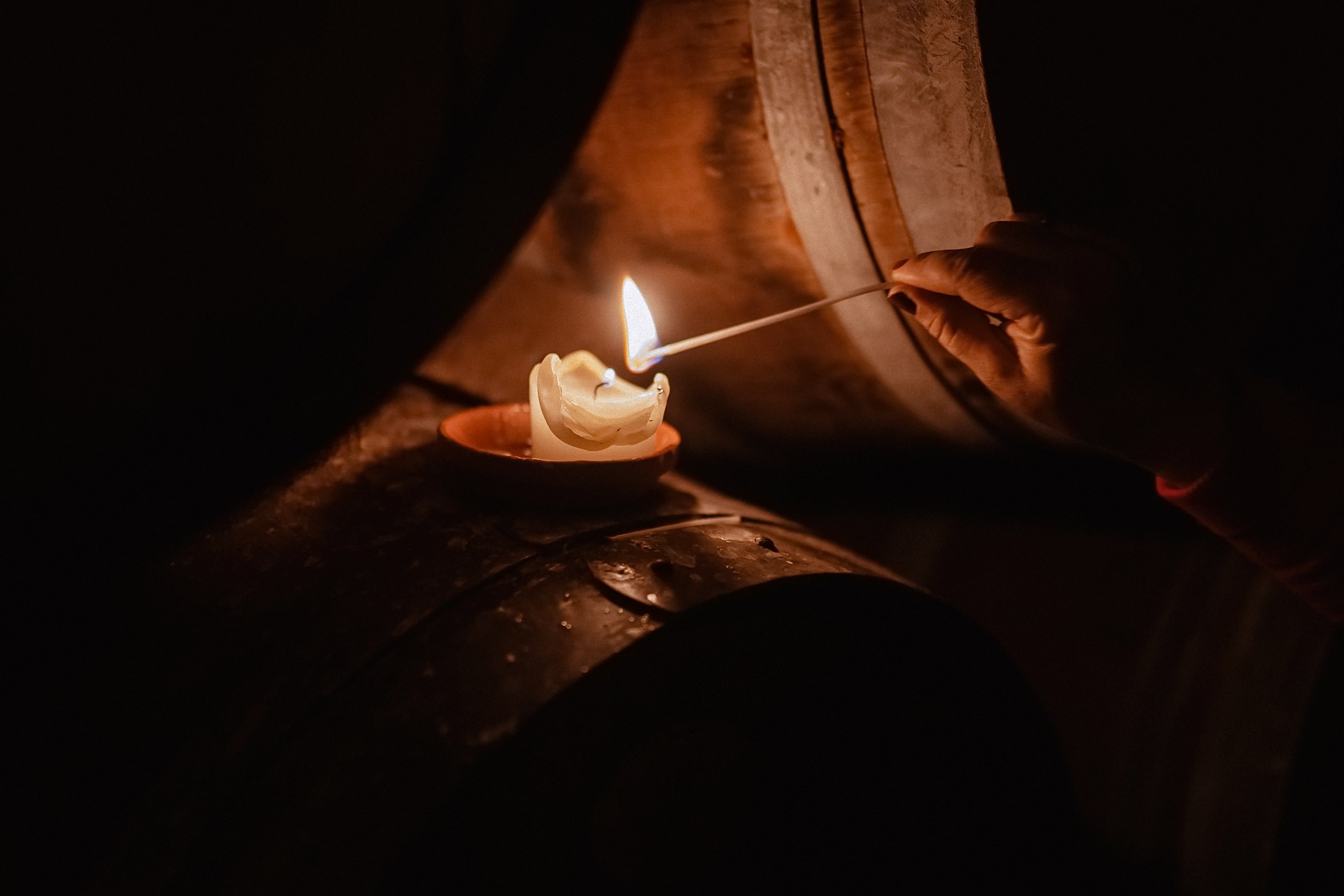