Lead and silver—that’s what people were hoping for in the 15th century when they started burrowing into the mountain near Weinheim-Hohensachsen. More than 500 years later, the Odenwald Old Mining working group has made the Marie in der Kohlbach mine accessible to visitors of all ages. It took many hours of voluntary work—and has revealed a lot of enthusiasm from locals for the mining history of the region.

“There’s weather there!” says Jochen Babist touching the steel door, in the middle of which is emblazoned the mining symbol: hammer and pick. Behind the door, it goes down about seven metres and out comes a pleasantly cool breeze—‘weather,’ as the underground air and gas movements are called in mining. A little later Markus Gnirß is standing next to him. He too holds his hand to the door. “Indeed.” The two men look at each other, astonished and somewhat perplexed. It is obvious that they would like to climb down the ladder right away, into the tunnel, into the depths, and take a look. The underground passage is blocked and “normally the air stands still here,” Jochen explains. Something must have happened to cause the air passing through now. But they are guiding a group of visitors who they can hardly take with them into a buried tunnel. So Jochen turns to Markus: “I’m going back tonight. Are you coming?” The answer is a clear “sure!”

Jochen and Markus are members of the Arbeitsgemeinschaft Altbergbau Odenwald (Odenwald Old Mining working group), which runs the Marie in der Kohlbach visitor mine in the south-east of the Hohensachsen district on behalf of the town of Weinheim. All members work on a voluntary basis. They do this because they have caught the ‘mining bug,’ as Jochen puts it. He holds a degree in geology and works for the Geo-Naturepark Bergstrasse-Odenwald. Mining archaeology is a hobby he pursues enthusiastically. Just like the rest of the working group’s members.

The mine is listed. In agreement with the office for the preservation of historical monuments, the working group is only allowed to clear the historic tunnels and shafts of rubble, search for traces and restore parts of the mine to their original state. It has been doing this here since 1995 when the mine’s upper tunnel had still been completely blocked and inaccessible. Bit by bit, metre by metre, the amateur mining archaeologists have been digging their way through and uncovering over 500 years of mining history. The mine has been open to visitors since 2008 and is constantly being expanded. In 2022, the working group began clearing the lower tunnel, which was built around 1740 and is located about 30 metres below the current visitor route. 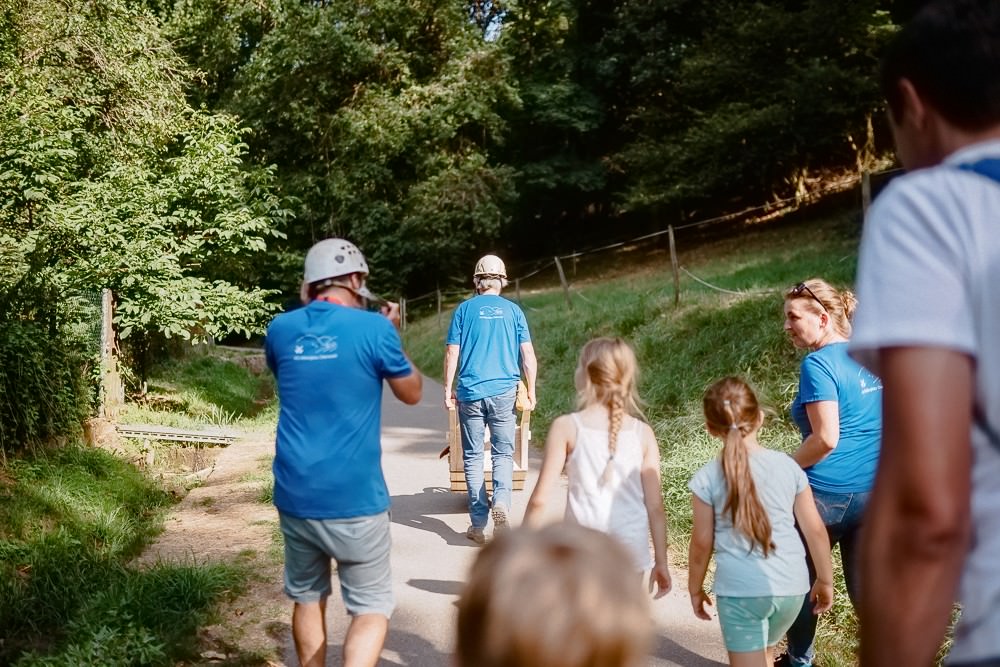 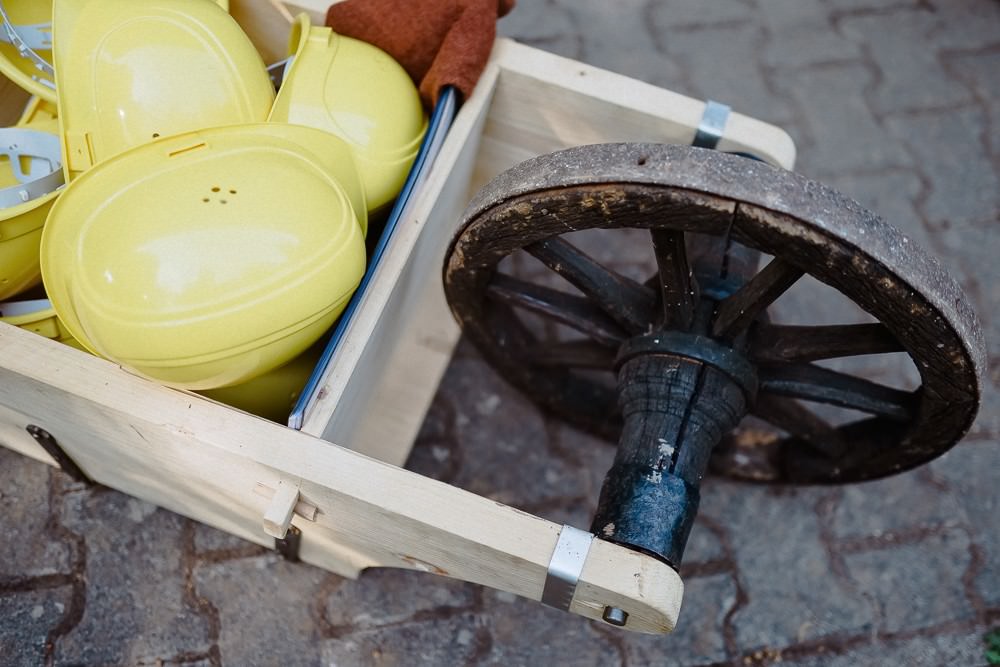 with the right equipment, of course! 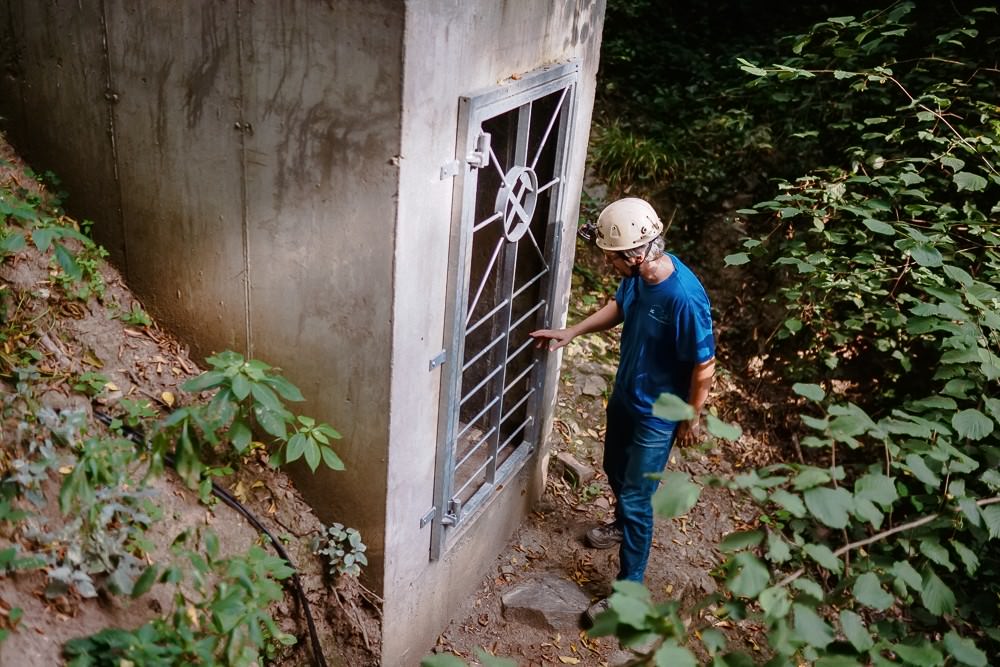 “There’s weather there!” Jochen Babist and the riddle of the mysterious draught. 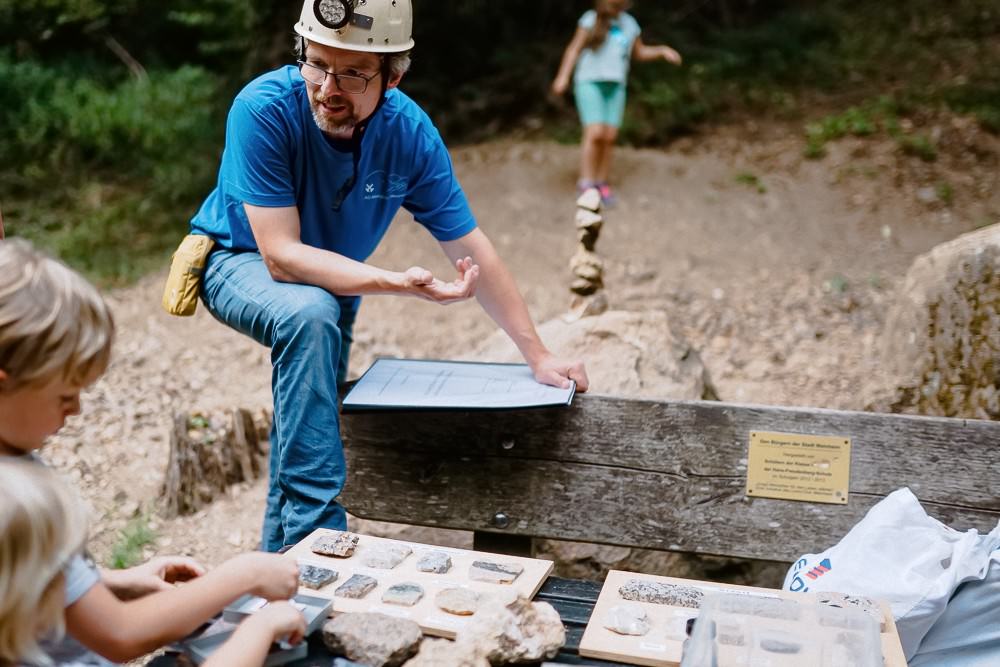 Jochen explains to the children what the miners wanted to find here —and what they actually found. 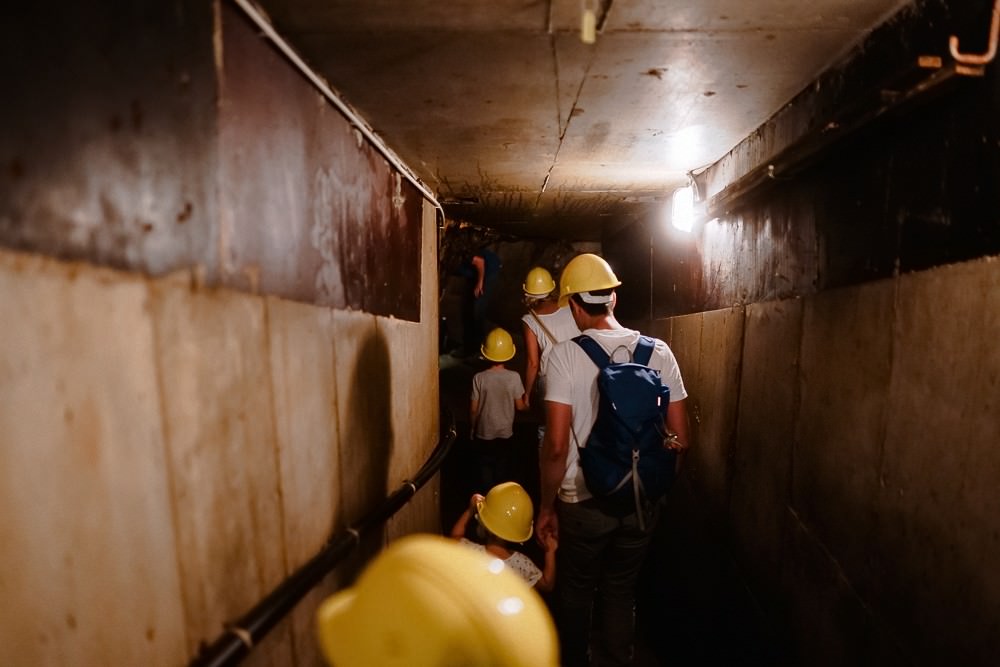 Delving into the mountain. 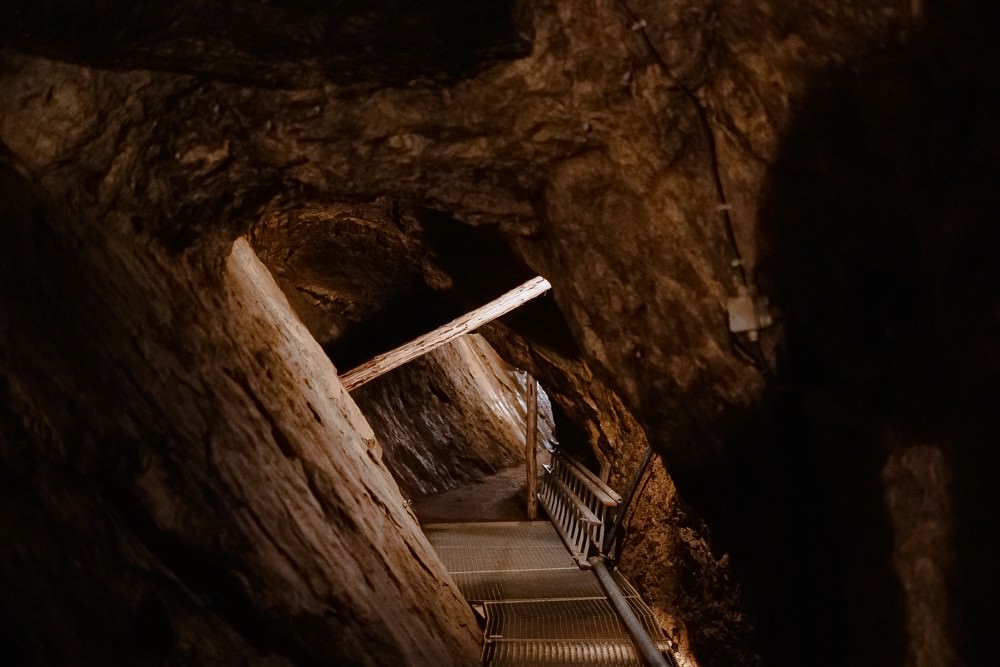 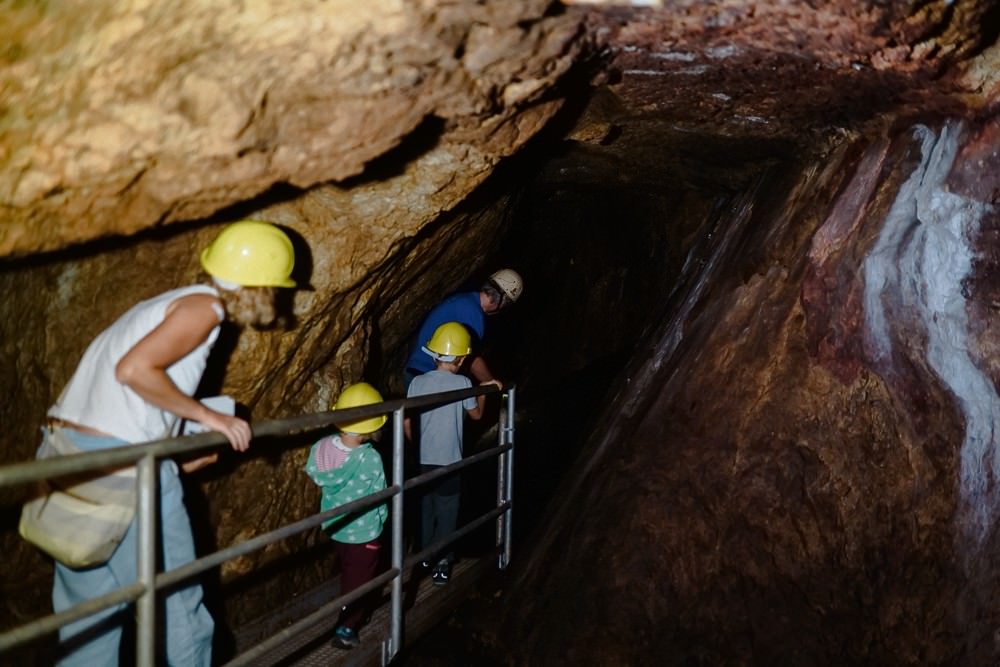 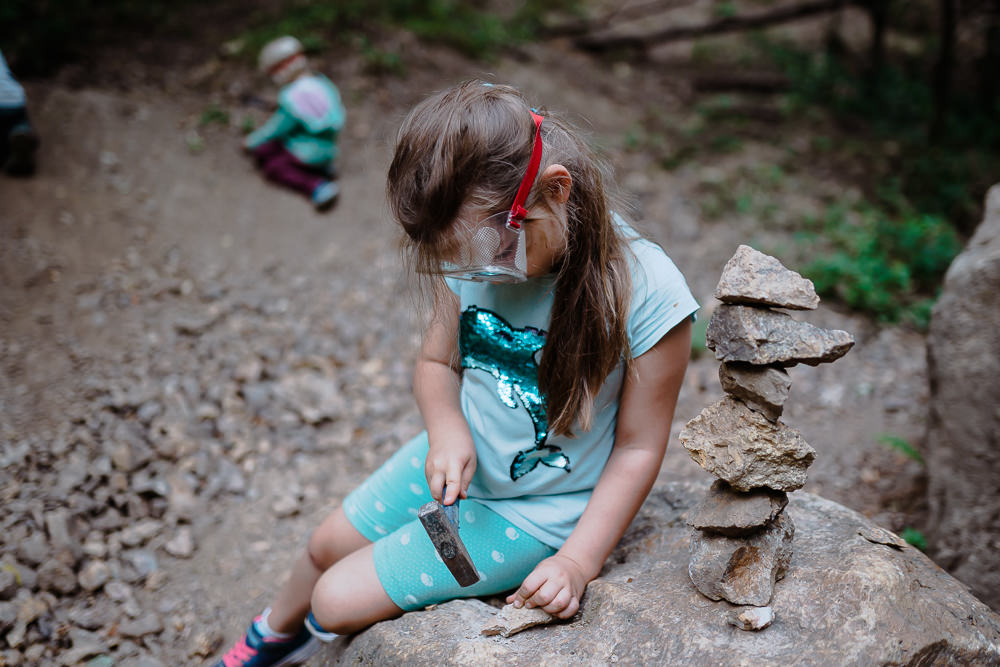 After the tour below ground, the children are allowed to try their luck above ground.

But for now, the route leads up the mountain, all the way to the ‘mouth,’ the official entrance to the visitor mine. Jochen and Markus take turns pushing a wooden wheelbarrow up the forest path. The faithful replica of a 16th-century mine wheelbarrow holds the yellow helmets for the visitors. Four children and four adults are going underground today. The two mining enthusiasts design their tour accordingly. Arriving at the entrance, Markus slips into a brown woollen robe. “Now, how do I look?” “Like a dwarf!” He does indeed, especially when he puts on the robe’s pointed cap. “The cap used to be filled with straw,” Jochen explains. “It served as a kind of antenna: If it rustled at the top, you knew you’d better bend down. And if it was too late for that, the impact was somewhat cushioned at least.” Markus ties on a piece of leather at the back—the ‘arse leather,’ as it is called in mining jargon.

Sometimes you feel like Indiana Jones from the Bergstraße

Markus Gnirß about the adventures below ground

This is what the miners wore underground in the late Middle Ages. The mine is at least this old. Mining was practised along the Bergstraße road between Großsachsen and Hohensachsen from 1291 at the latest. Then, in 1474, a “pit on the rear Colnberg” was mentioned in a document for the first time. “We suspected early on that this could be our mine,” Jochen recounts. They found a climbing board, about three metres long, in the tunnel in 2004. It is a board with holes that used to serve the miners as a ladder. “Investigations have shown that the wood used for it was felled in 1476. That fits the time span.”

People had hoped for lead and silver when they started burrowing into the mountain here. However, they gave up quickly. Some 300 years later, Baron of Sickingen tried his luck here. But he ran out of money. A few years later, a new attempt was made and from 1779 mining of ore actually began. However, the results were disappointing: Only 1.3 tonnes of lead and 3.2 kilogrammes of silver were extracted from the ore. Another attempt in the 19th century was also unsuccessful. “That is our luck,” says Jochen. “Everything here would have been flattened if they had been successful. So, a large part of the mine has been preserved and we can understand how and with what materials they worked back then.”

So: Put on a helmet and let’s delve into mining history! The temperature drops with each step into the tunnels. The air is humid. A visit here is a pleasant way to cool down on hot summer days. Lamps illuminate the narrow passage that leads along a fault surface here—a fracture in the rock that was formed when the Rhine Rift Valley subsided. “Fascinating, isn’t it?” Jochen runs his palm along the stone. “This is an accessible piece of history of the earth.”

Suddenly, it becomes dark around the visitors. At Jochen’s command, Markus has switched off the lights in the mine. Only the glow of his helmet lamp still shines into the tunnel. The children watch wide-eyed as he lights the wick of a medieval miner’s lamp. It is filled with beef tallow. “Smells like a schnitzel,” one of the young visitors thinks. And it’s not particularly bright either. But the miners had to make do with it in the old days. Later, ‘oil frogs’ were introduced—a type of oil lamp that was a little safer, but not necessarily brighter.

It quickly becomes clear that the miners’ work was extremely hard and difficult. Their tools were rather primitive, too. They used to work their way through the rock with hammers and picks, centimetre by centimetre. Things got faster when a new technique was invented: blasting with black powder. Jochen shows the visitors how the miners drilled blast holes into the rock—without any drill at all. And he demonstrates how you can recognise even today where they used to “hit” and where they used to “blow up” the rock.

The guides enrich the tour with short excursions into the animal world: to the cave spiders guarding the small white cocoon with their young on the ceiling of the tunnel; or to the considerable heap of bat guano at the back of the pit. The mine is open to visitors until the beginning of October. In winter it belongs entirely to the bats. “We hope that the opening of the bottom floor will create temperature differences in the pit. Then even more bats of different species could make their home here,” says Jochen.

They work closely together with animal conservationists and with the archaeological monument preservation institutions in Baden-Württemberg, the Geo-Naturepark Bergstrasse-Odenwald, universities, state offices and mining archaeologists from all over Europe. The network is important for the working group, because the operation of the mine is funded through subsidies and donations only. For this purpose, the working group founded the Altbergbau Bergstraße-Odenwald association, and Jochen is its chairman. The guided tours are free of charge. “Of course we’re happy when visitors donate a small amount—whatever may be suitable for them.”

It is the enthusiasm for the work here that drives Jochen, Markus and the other association and working group members. “Mining has shaped our cultural landscape and left many traces. And rediscovering these traces simply fascinates me,” Jochen smiles. “And sure, it’s also an adventure to crawl through narrow, water-filled tunnels without knowing where exactly they lead.” Markus laughs. “Sometimes you feel like Indiana Jones from the Bergstraße.” Just like now, where we are eager to solve the riddle of a mysterious draught. In this sense, they greet the visitors with the traditional miners’ greeting: “Glück auf!”

The mine is open to the public from May to the beginning of October. There is a public visiting day on one Saturday each month. Individual guided tours are offered for groups of 5 or more. Simply contact Jochen Babist at j.babist@geo-naturpark.de to book a tour. The association offers special guided tours and birthday parties for children, as well as hikes through the entire Hohensachsen-Großsachsen mining district. 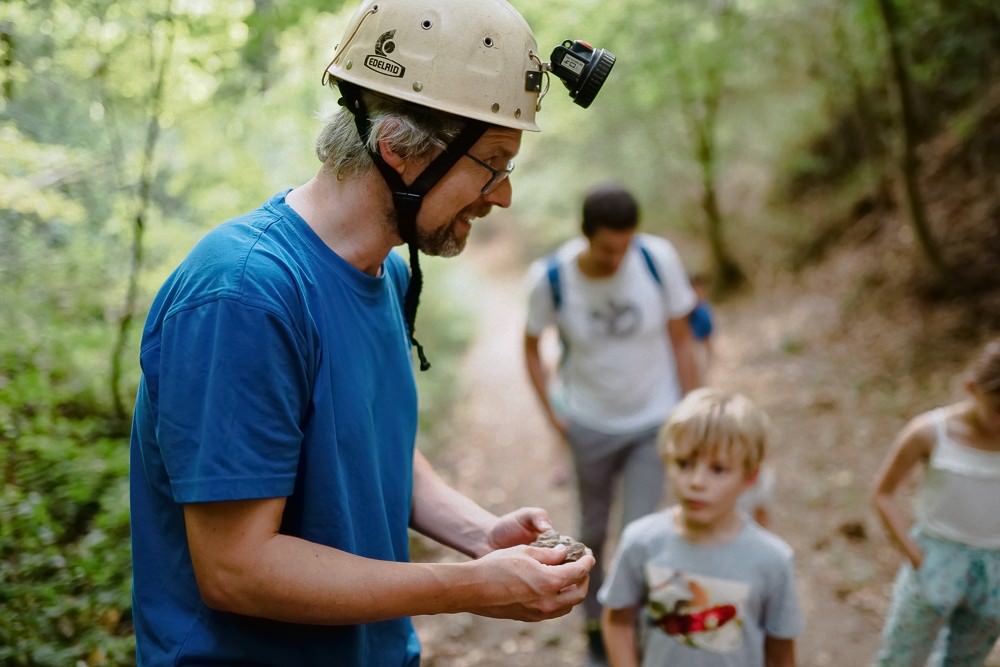 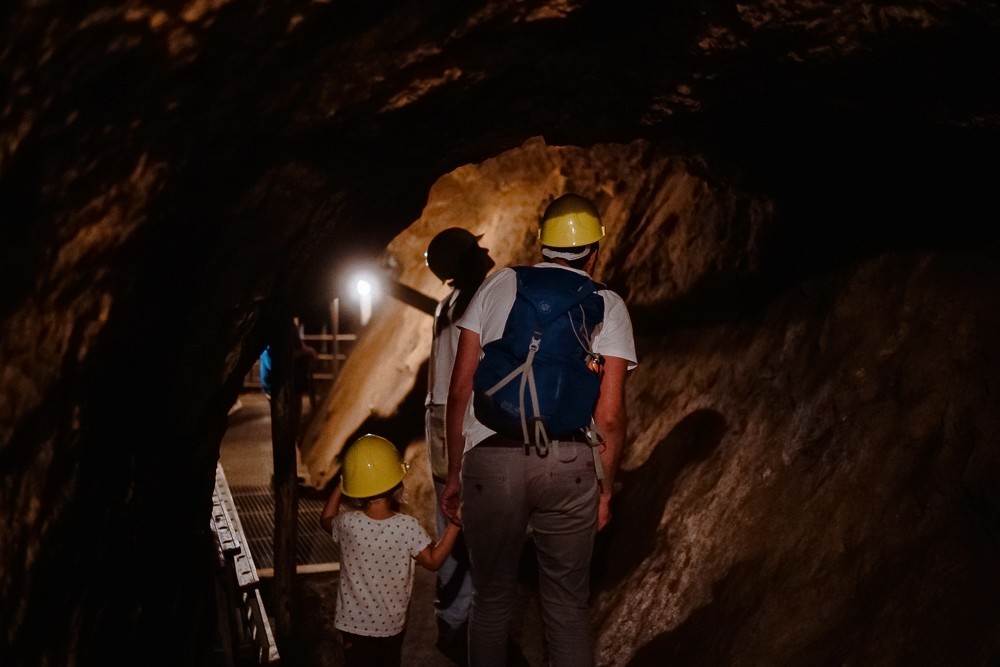 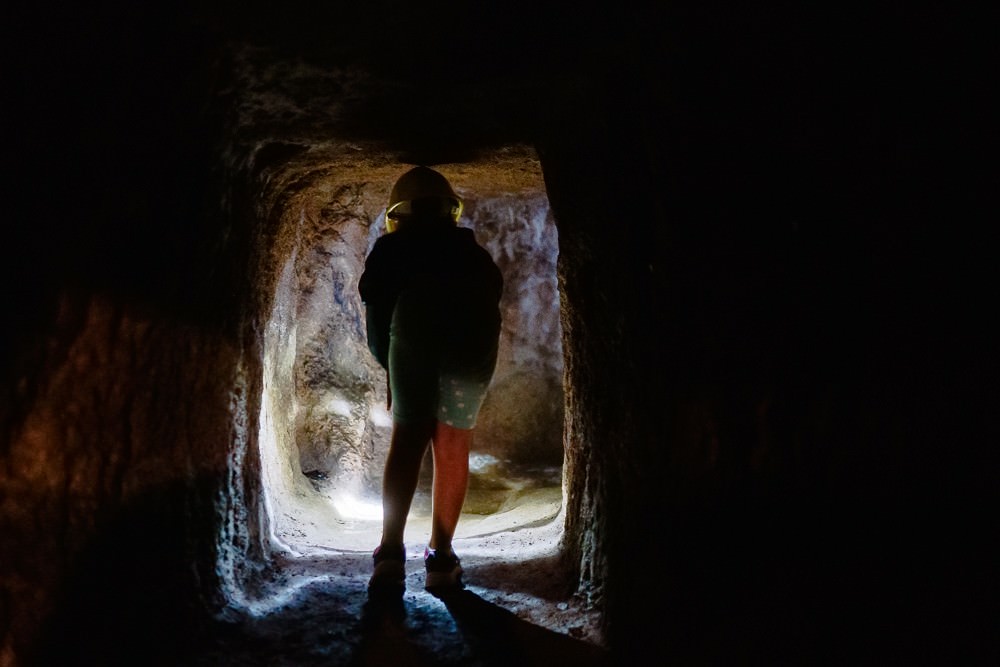 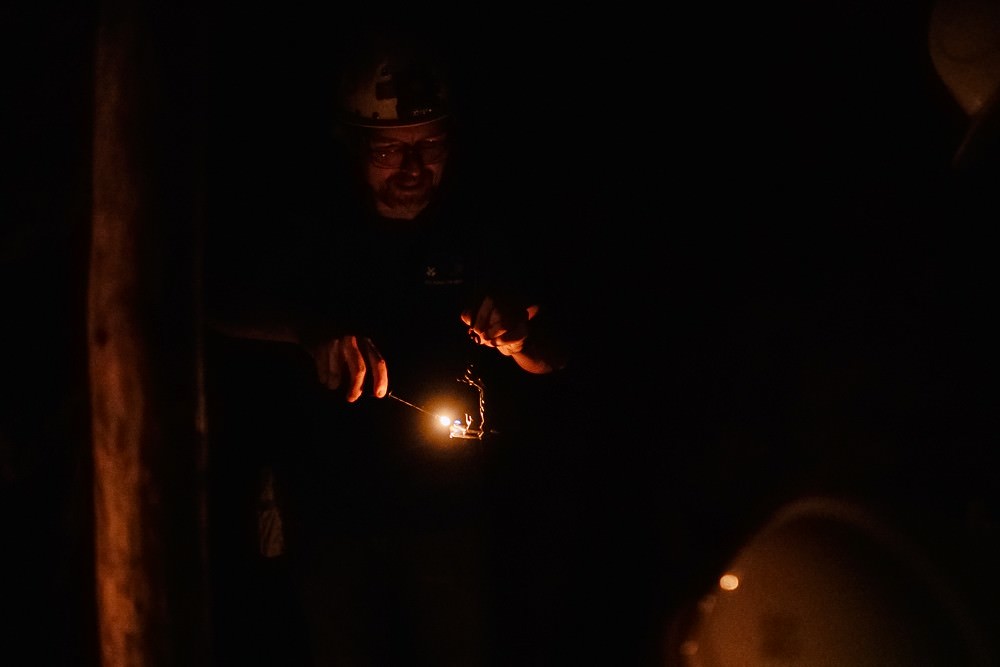 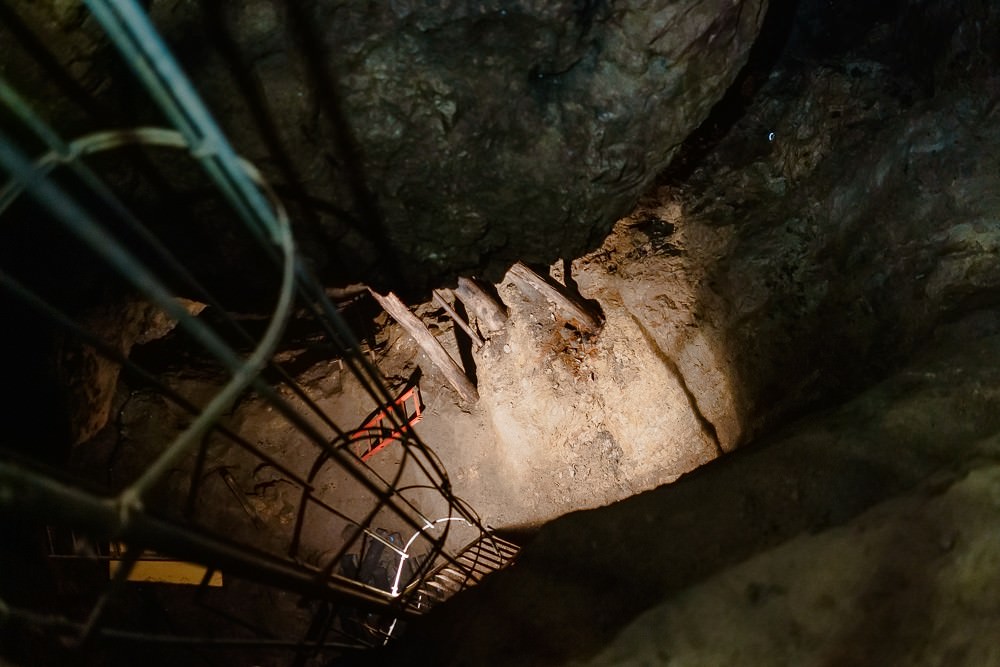 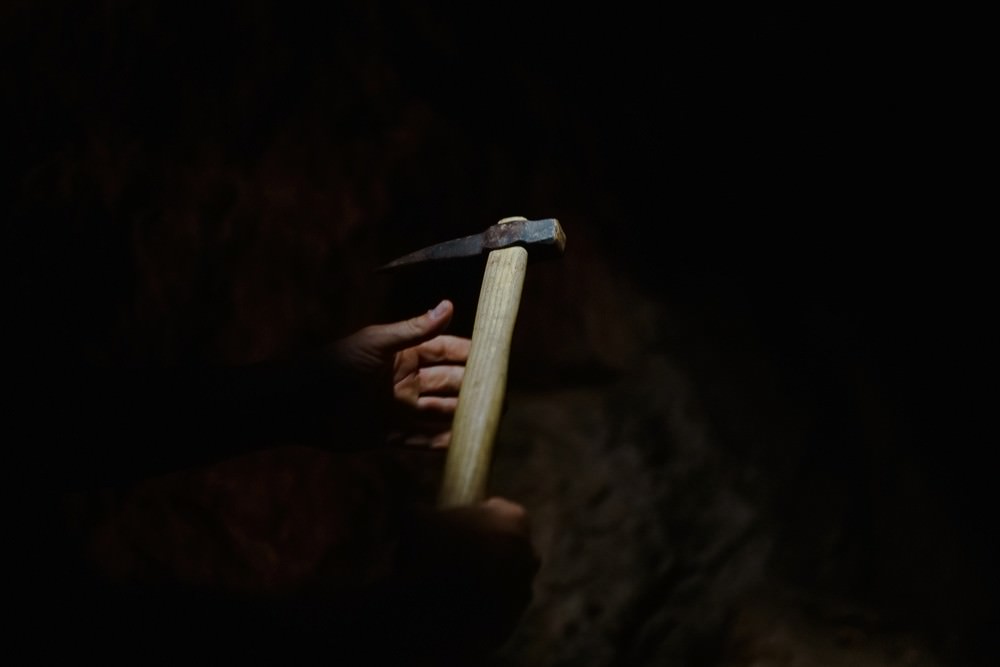 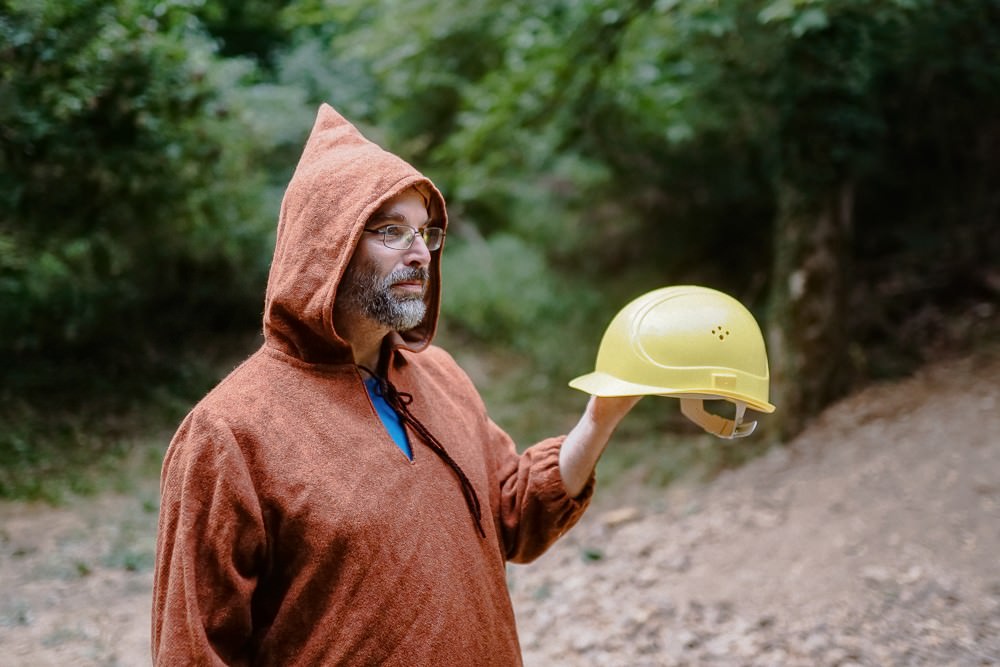