The heritage of the Crane

Wrestling for victory – a spectacle as old as mankind. And yet, each wrestling match is a unique and thrilling experience. The Palatinate wrestling stronghold town of Schifferstadt stands for this spirit. Here, coach Markus Scherer has been preserving the heritage of the “Kran von Schifferstadt” (“Crane of Schifferstadt”) and preparing talents like Denis Kudla who won a bronze medal at the Olympic Games in Rio and a silver medal at the World Championships in Paris.

Another warm summer’s evening in Schifferstadt, a town located in the Vorderpfalz (the south-eastern Palatinate) – Germany’s hottest region in statistical terms. Things are getting heated inside the sports hall “Wilfried Dietrich-Halle” of the club “VfK Schifferstadt”. Three training bouts are fought at a time on the blue mats. The neon lamps shed light on how much power, speed and stamina wrestling requires. You can see the exertion in the young athletes’ sweaty faces. Nevertheless, sometimes the Graeco-Roman style comes across as a spectacle in slow motion: in the moments where the wrestlers carefully grope for the right grappling hold or joint lock or when they mentally focus before they throw their opponent on the mat through a fierce jolt.

Leaning against a wall with his arms folded across his chest, Markus Scherer follows the bouts carefully. The 53-year-old coach reads from the wrestlers’ gestures, not from their faces. For the spectator wrestling looks simple, he finds. “But this impression emerges only because the athletes are coached so well,” he growls out to anybody who may underestimate this sport.

For the several-time German champion VfK, all the strings are pulled in Schifferstadt in the street named Neustückweg. Here, wrestling is no marginal discipline, it merely embodies tradition and identity and for many it means half their life. There are two things that the small Palatinate town with its around 20,000 inhabitants has become famous for: the “Golden Hat”, a sensational Bronze Age artefact, dug out by a farmer working in his fields in 1835; and Wilfried Dietrich, the legendary “Kran von Schifferstadt” (“Crane of Schifferstadt”) who produced a spectacular victory at the Olympics in 1972.

The wrestlers who face the duels here in their skin-tight suits “not only have stamina, but they have arm and stomach muscles hard as steel, and an intensively trained cervical vertebral column,” says Markus Scherer. But even when power and fitness are there in abundant supply, in the end it is the iron will that is the key to success, Scherer tells us. It is the readiness to pass your own limits that makes a winner.

Wrestling is physical work: Georg Kahachtyam (on the left) and Etka Sever during training.

The Schifferstadt man knows what he is talking about, he originates from a wrestling dynasty. Markus Scherer is the youngest of three brothers, all of which have gained a reputation as wrestlers with brilliant technique. The coach joins the collection of world-class athletes from Schifferstadt, along with Freddy and Bernd. The native of Ludwigshafen won a silver medal at the 1984 Olympics and five years later he fought his way to become European Champion for Graeco-Roman style. And the Scherer family wrestling legend is to be continued. Markus Scherer’s son Marvin is amongst the wrestlers who are practising at hip-hop beats tonight. Marvin wrestles for the club VfK Schifferstadt in the Bundesliga (national league) and he has already gained a fifth place at the German Championships. 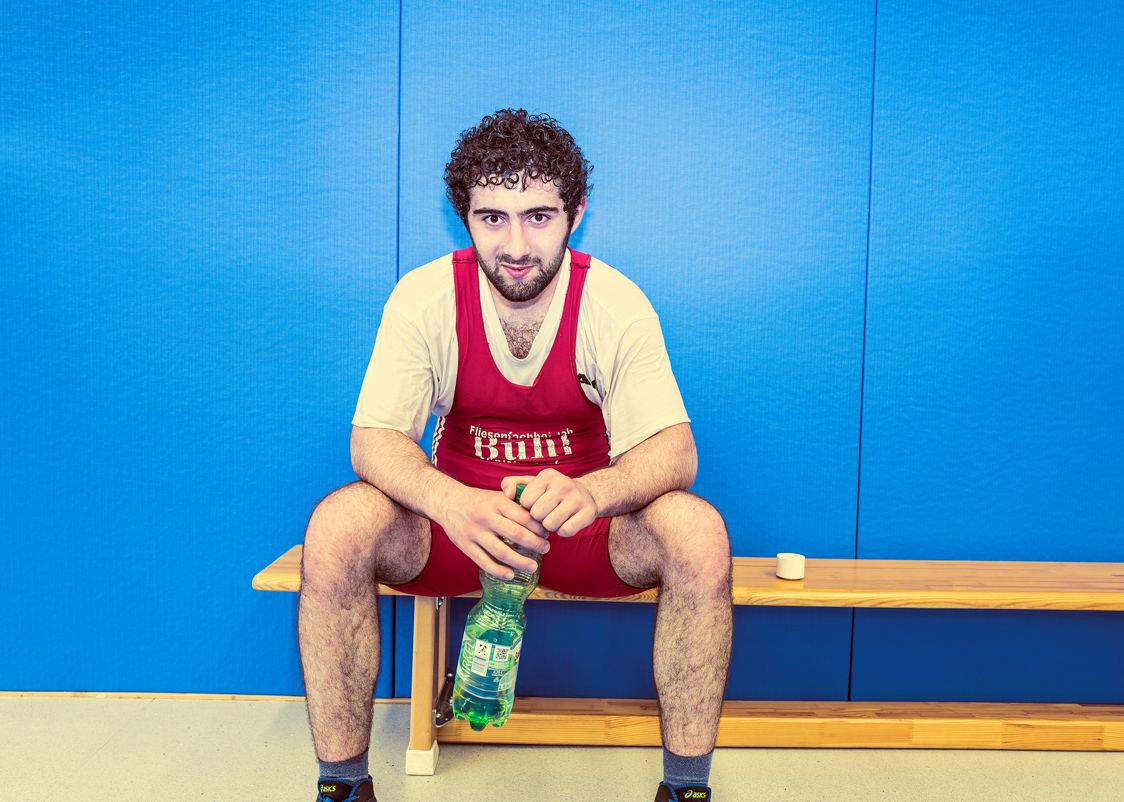 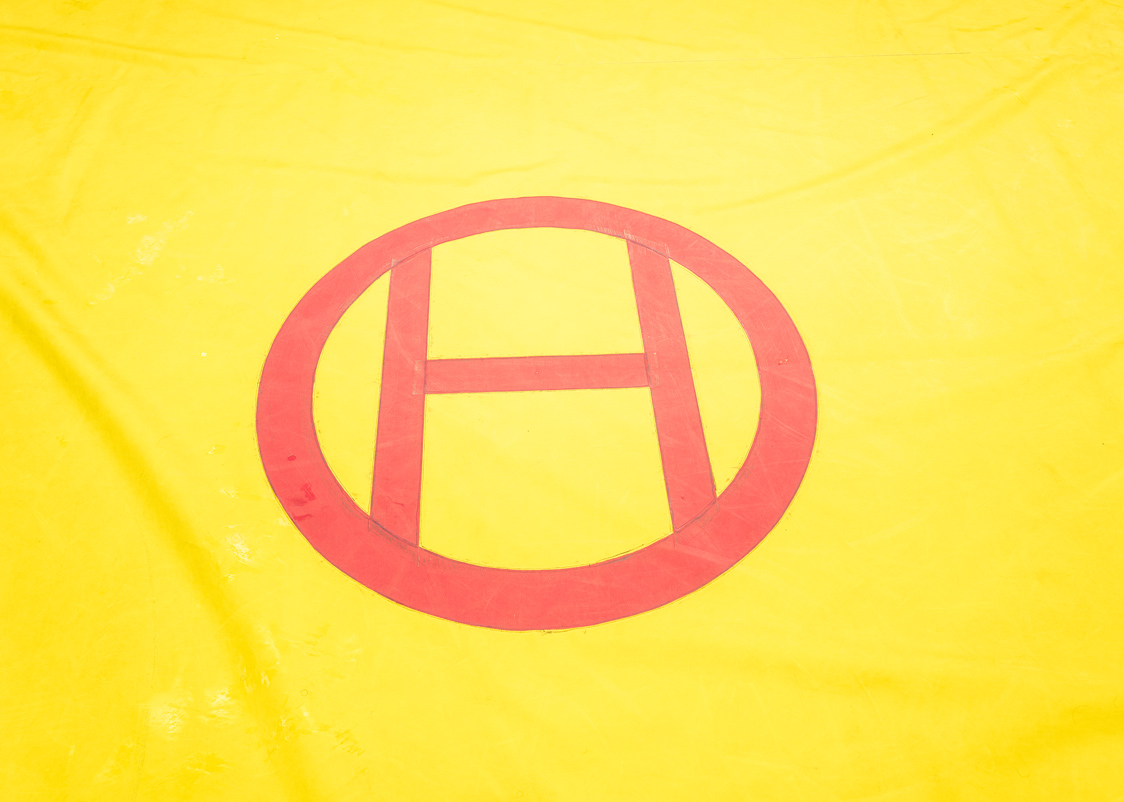 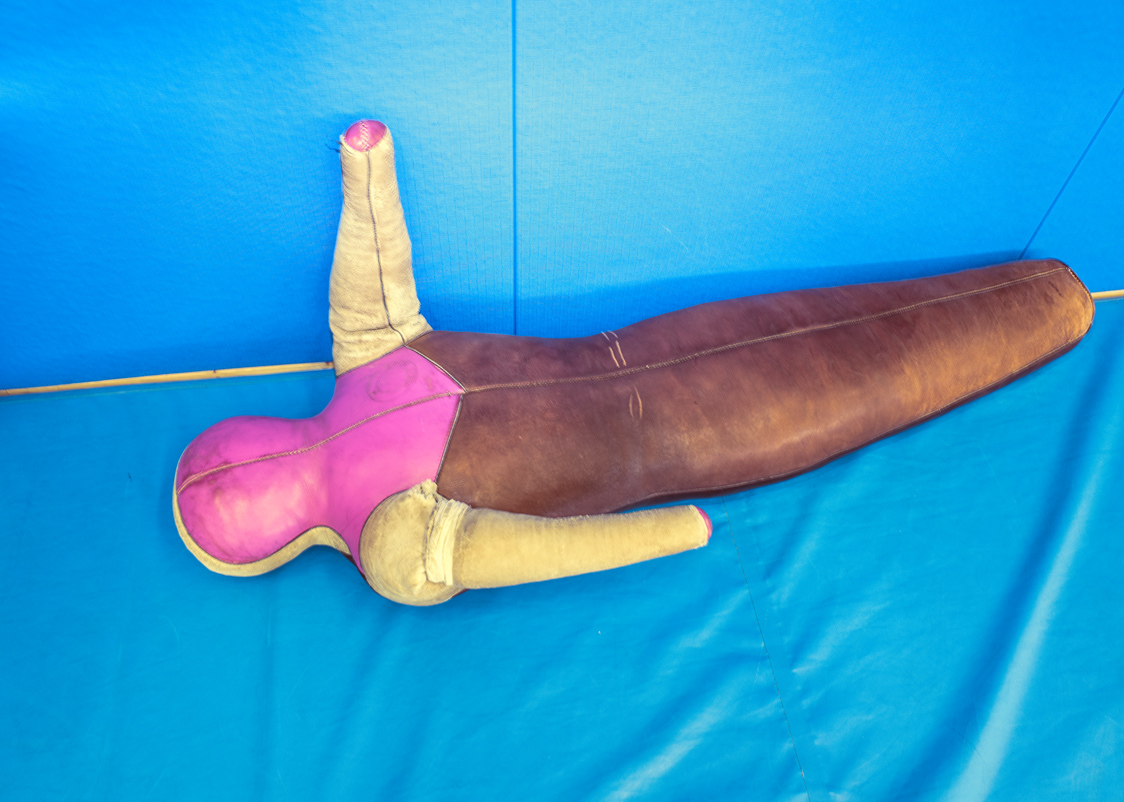 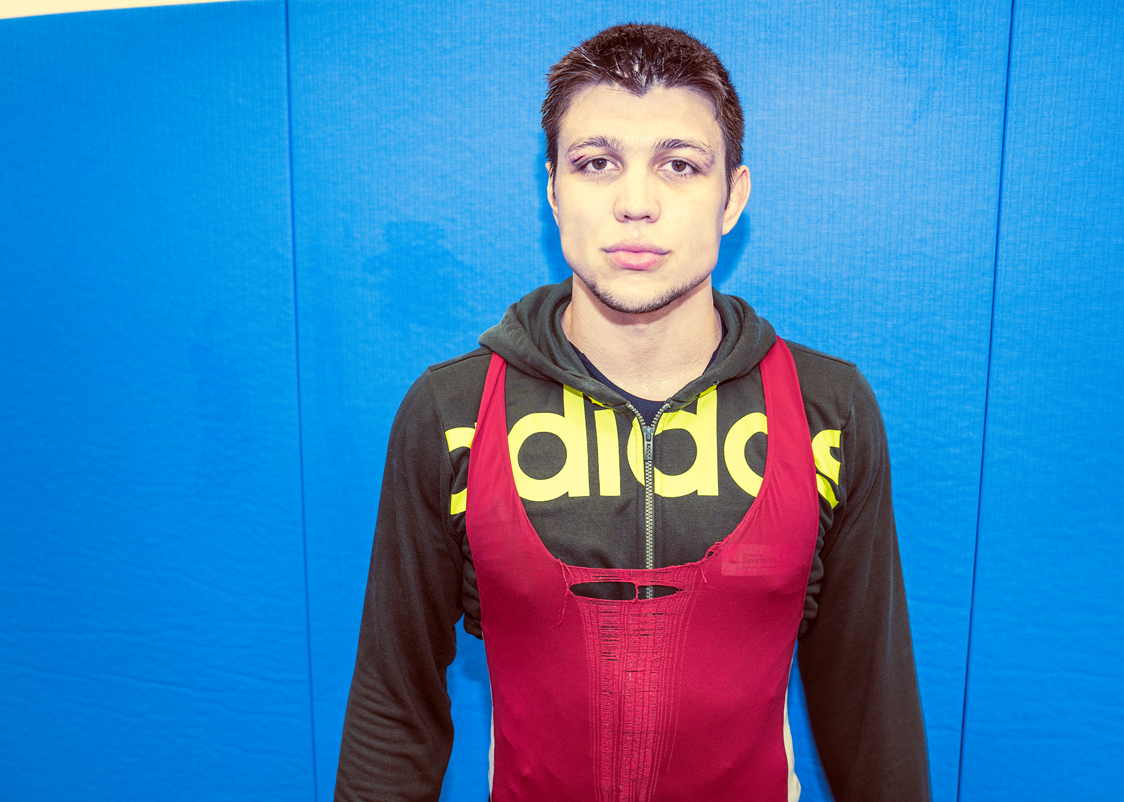 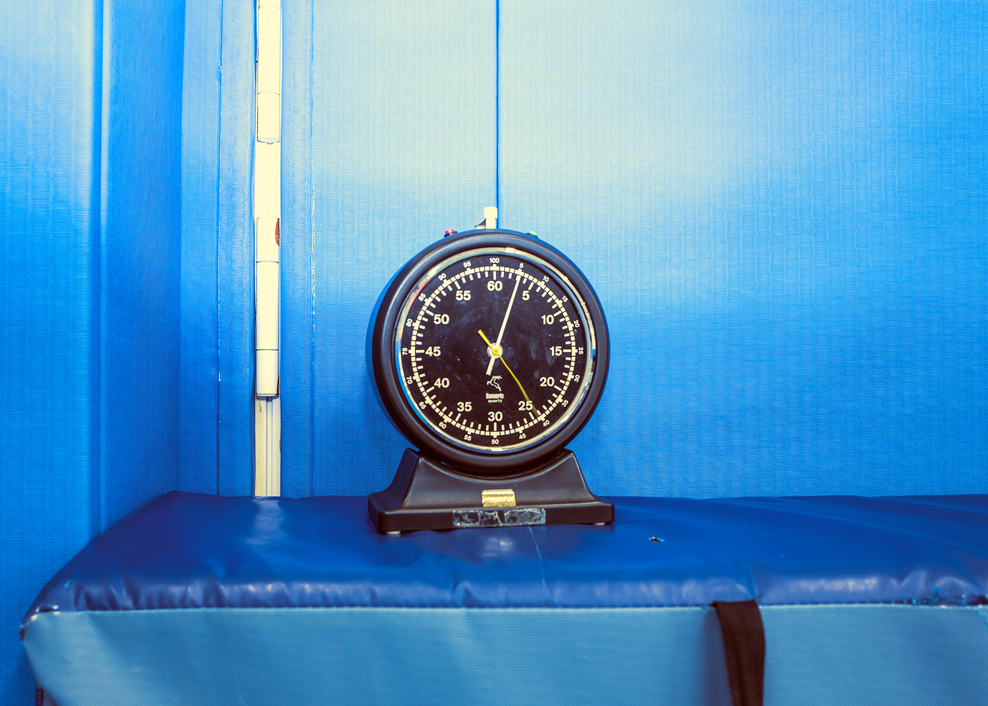 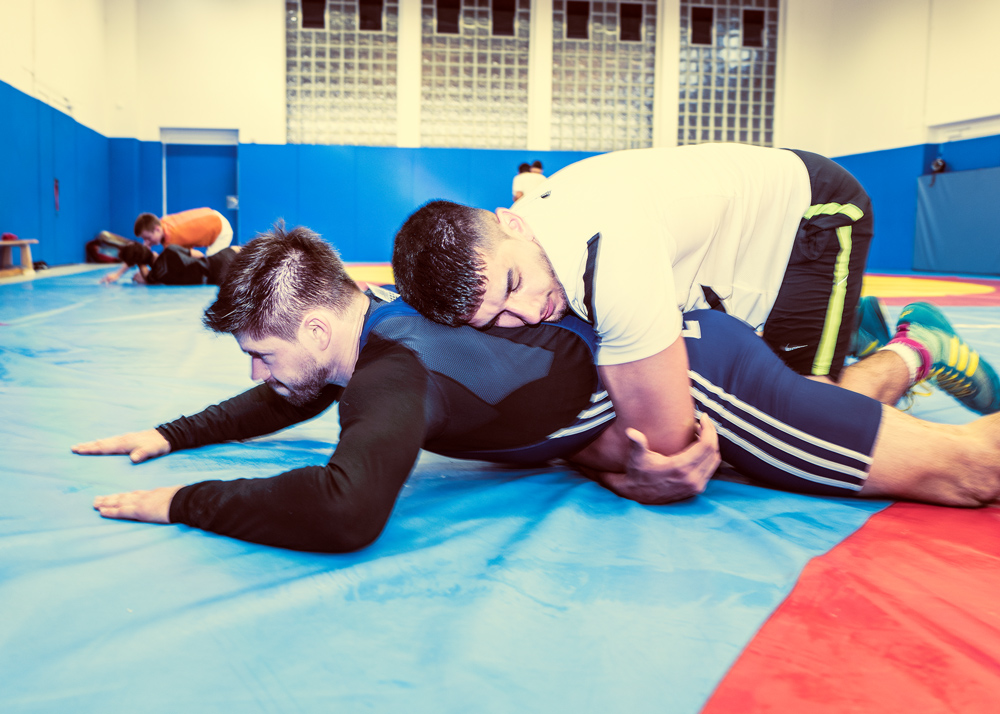 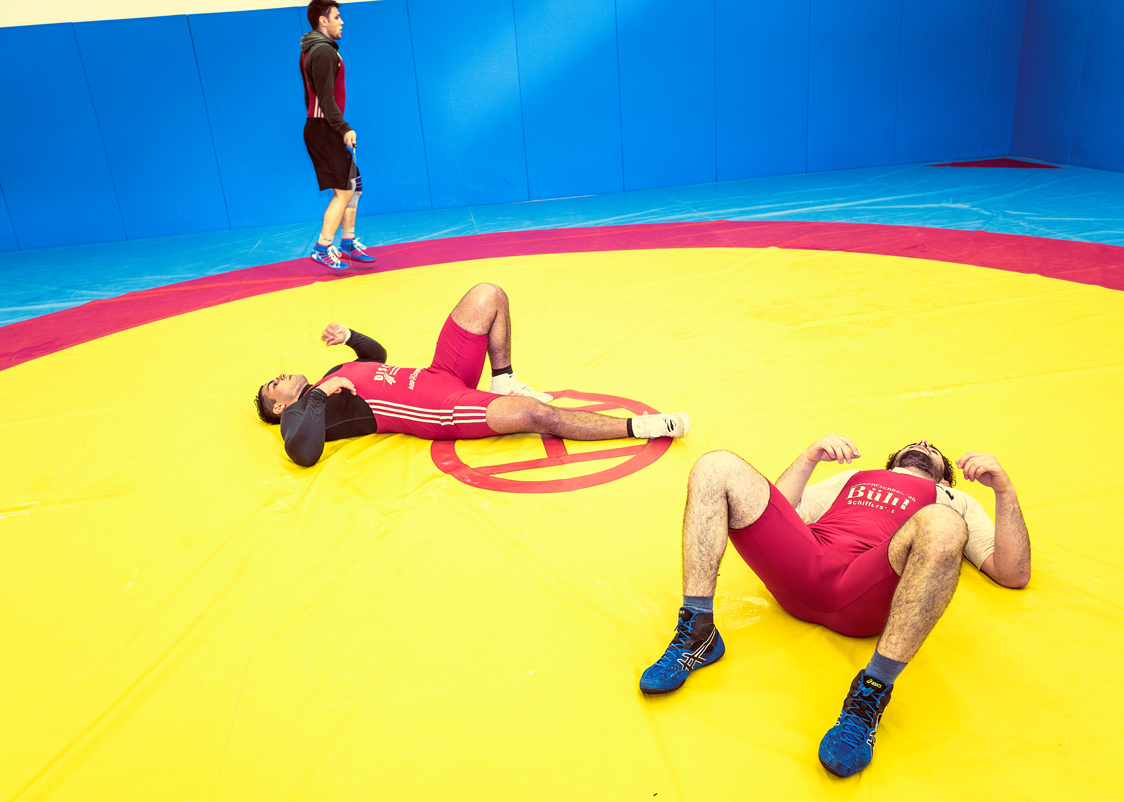 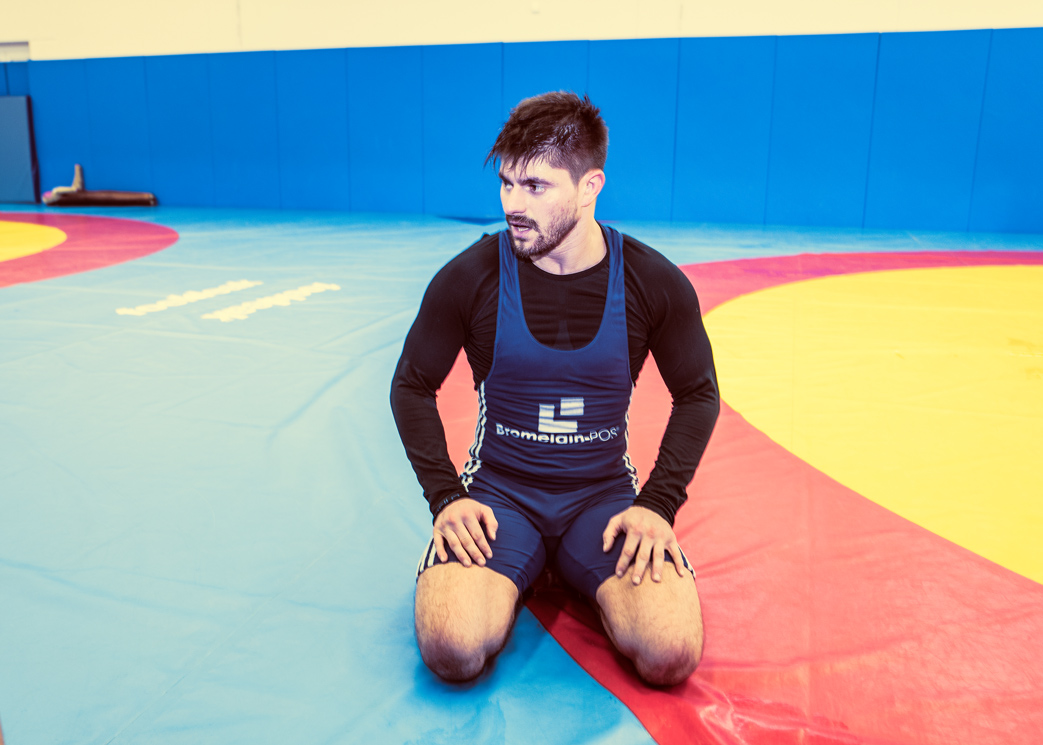 Sometimes, when one of his protégés tries a throw without concentration or attacks his opponent ponderously, the trained physical education teacher Markus Scherer can react rigorously. He is a coach, not a chummy guy, he explains. “It is my goal to prepare the sportsmen for their future in the best possible way. Hence you need to put them in the picture,” the coach finds. He has seen many wrestlers come and go. And, of course, he wants to turn the young athletes into successful wrestlers for his club, the German record champion VfK Schifferstadt.

“I come from this region, and I wouldn’t leave it even if I got lots of money for it.”

Founded in 1896, the club has gained great successes and so it was only fair to create the Olympics wrestling base here. Today, VfK wrestlers as well as athletes from the squad of the Deutscher Ringerbund (German Wrestling Association) and the Bundeswehr-Sportförderkompanie (Federal Armed Forces company for sports promotion) are trained at the site. At the moment, Scherer pays particular attention to one of them: Denis Kudla. The 21-year-old wrestler gained his first title in 2011 and won, among other victories, the German Championships last year. Entering the finals at the qualifying tournament in Istanbul, Kudla saved his starting position at the 2016 Olympic Games in Rio de Janeiro, where he finally won a bronze medal.

Olympia. This word makes the coach’s and learner’s eyes sparkle. “I still get happy every day about the fact that I made it there,” says the young athlete, who will compete in the weight category of up to 85 kilogrammes. The match in Istanbul was dramatic. The young exceptionally talented athlete not only had to beat his opponent Metehan Basar, he also had to stand a hall that had been turned into a madhouse by the crowd. “To compete with a Turk in Istanbul and then to win the fight, that is quite special,” says Kudla with a smile.

The native of Augsburg has been living and doing training in Schifferstadt since the age of fourteen. “It has become home to me,” Kudla says. He is no longer able to imagine life without his mates, his girlfriend and the Palatinate mentality. “I do miss my parents though. They live in Munich and I go to see them as often as I can,” Denis says. And he does not have much leisure time. For several hours per day, he does training and sweating at the Palatinate Mecca for wrestling. And the coach, how do they relate? “I wouldn’t have come that far without Markus Scherer, I trust him completely,” says the future Olympian.

Of course Denis Kudla, along with all those who are passionate in his discipline, knows the presumably most famous black-and-white picture in wrestling history. It features Wilfried Dietrich shouldering 200 kilogramme American Chris Taylor for a throw in an enormous act of strength. This picture, taken at the Olympic Games in 1972, illustrates well how the nicknamed “Crane of Schifferstadt” became immortal. In a large format, the picture decorates a wall on the top floor of the first German wrestling museum in Schifferstadt. An entire room of the restored half-timbered house is dedicated solely to the Crane.

Almost a thousand exhibits are placed on 140 square metres in five rooms. Over the past decades, the man from Schifferstadt reckons, the total amount of artefacts has risen to almost 90,000.

Jürgen Fouquet tells us that about 9,000 visitors per year stroll over the creaky floorboards from one exhibition room to the next one, from match to match. Among them there are many visitors from abroad – the nearest wrestling museum from here is as far away as Moscow. “I have strong connections to the Russian wrestling scene and to athletes in other countries,” Fouquet says. Like his father before him, the former master furrier had been a functionary for the legendary VfK Schifferstadt for decades. “I had never been a wrestler. But I already started to collect entrance tickets at the age of five,” the founder of the museum remembers.

Weighty opponents: the dummies for training

There is hardly anybody like Fouquet, when it comes to finding a person with a broad encyclopaedic knowledge about wrestling. So, what do all successful wrestlers in the world have in common, according to his knowledge? “To begin with, almost all of them have those wrestler’s ears,” the man from the Palatinate says smirking. What he is referring to is the visible disfigurement of the outer part of the ears that wrestlers usually have and that is caused by injuries suffered during bouts. But yes, total commitment to daily training is important, “only those who are ready to go without certain things, can achieve that. The ideal wrestler is proficient in asceticism,” Jürgen Fouquet says and laughs.