At the age of two and a half years, Gundi Pawasserat slipped into her first pair of ice skates. 55 years later the native of Ludwigshafen belongs to the most successful short track speed skaters in the world—and she has passed her passion on to her children.

Gundi Pawasserat keeps her eyes straight ahead in concentration. Her face is relaxed, her body is tensed. She holds her torso bent forwards with her hands clasped behind her back. The golden blades of her skates glide over the ice. Scratching sounds emerge from the surface in a regular rhythm. In the Herzogenried ice sports centre in Mannheim she skates across the 30-by-60-metre ice surface, lap after lap.

Gundi has glided over the ice for more than 55 years. Most of this time she trained in the Herzogenried centre, where many locals of Mannheim made their first tentative steps on the ice and later brought their children. The centre is also home to the state’s centre for competitive ice sports—for junior and senior figure skating, icestock sport, curling, ice hockey. And: for speed skating.

Gundi brought countless titles home to her Mannheimer ERC (MERC)—among them the German and the World Championships, her discipline being short track skating, which is probably the fastest speed skating discipline. 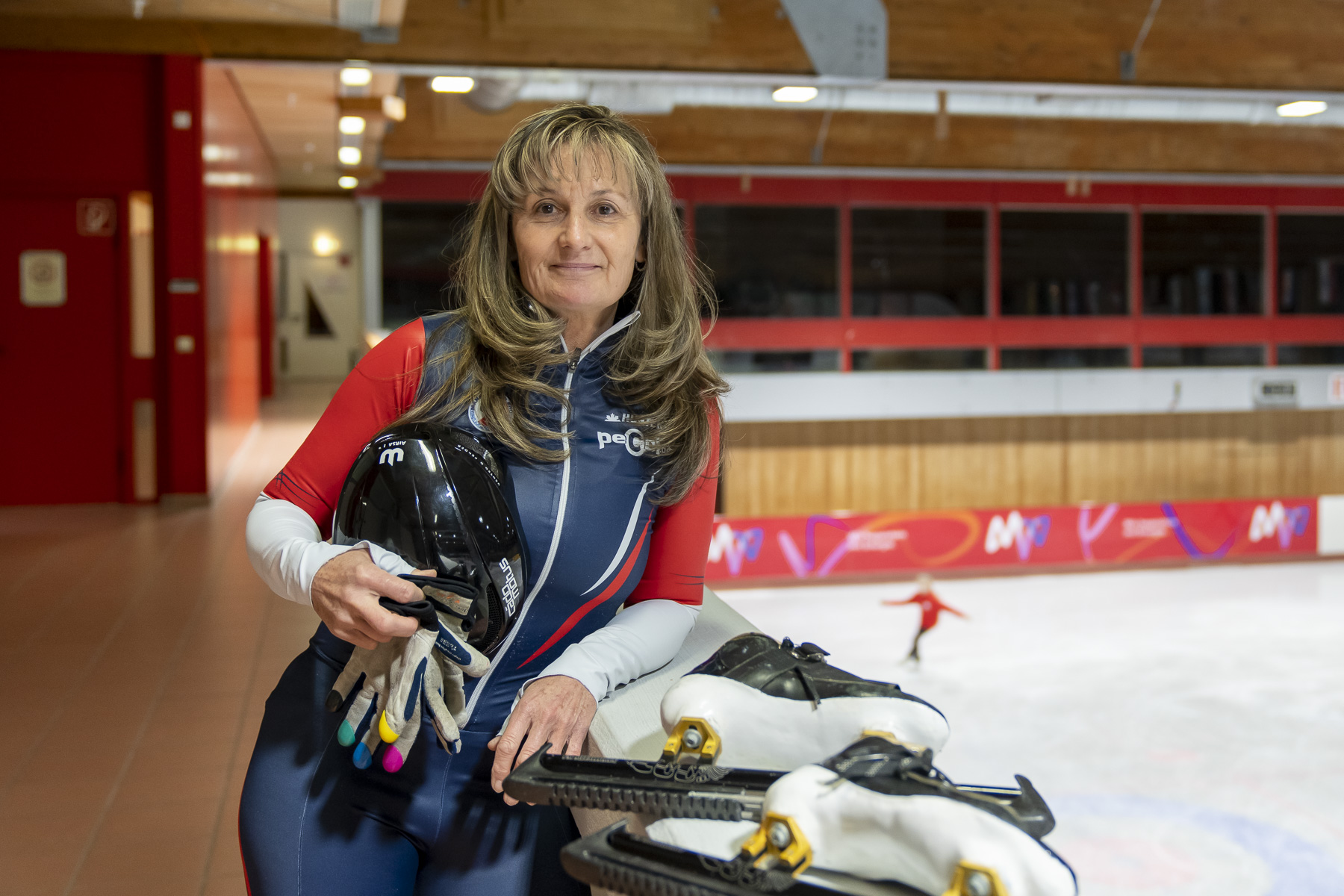 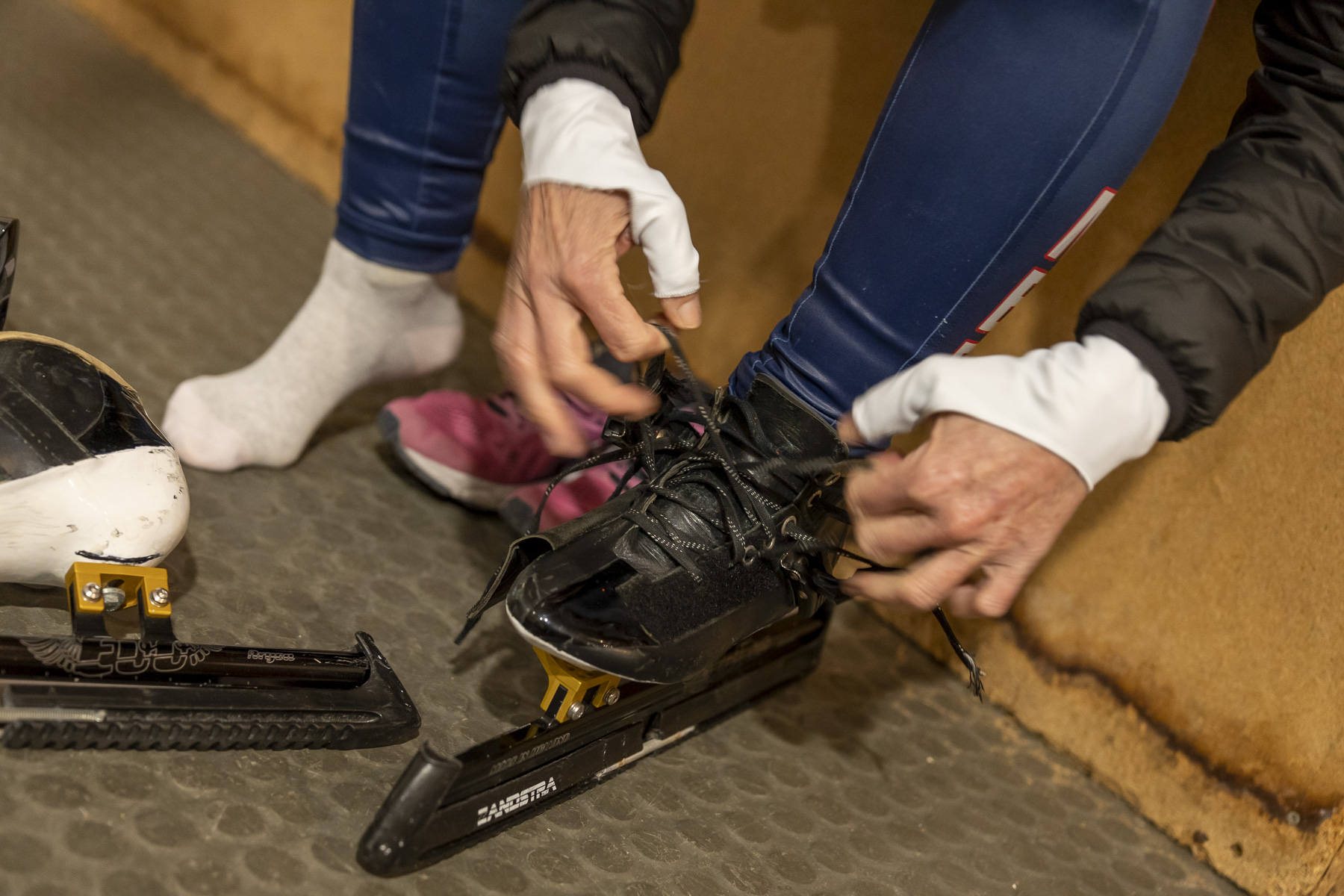 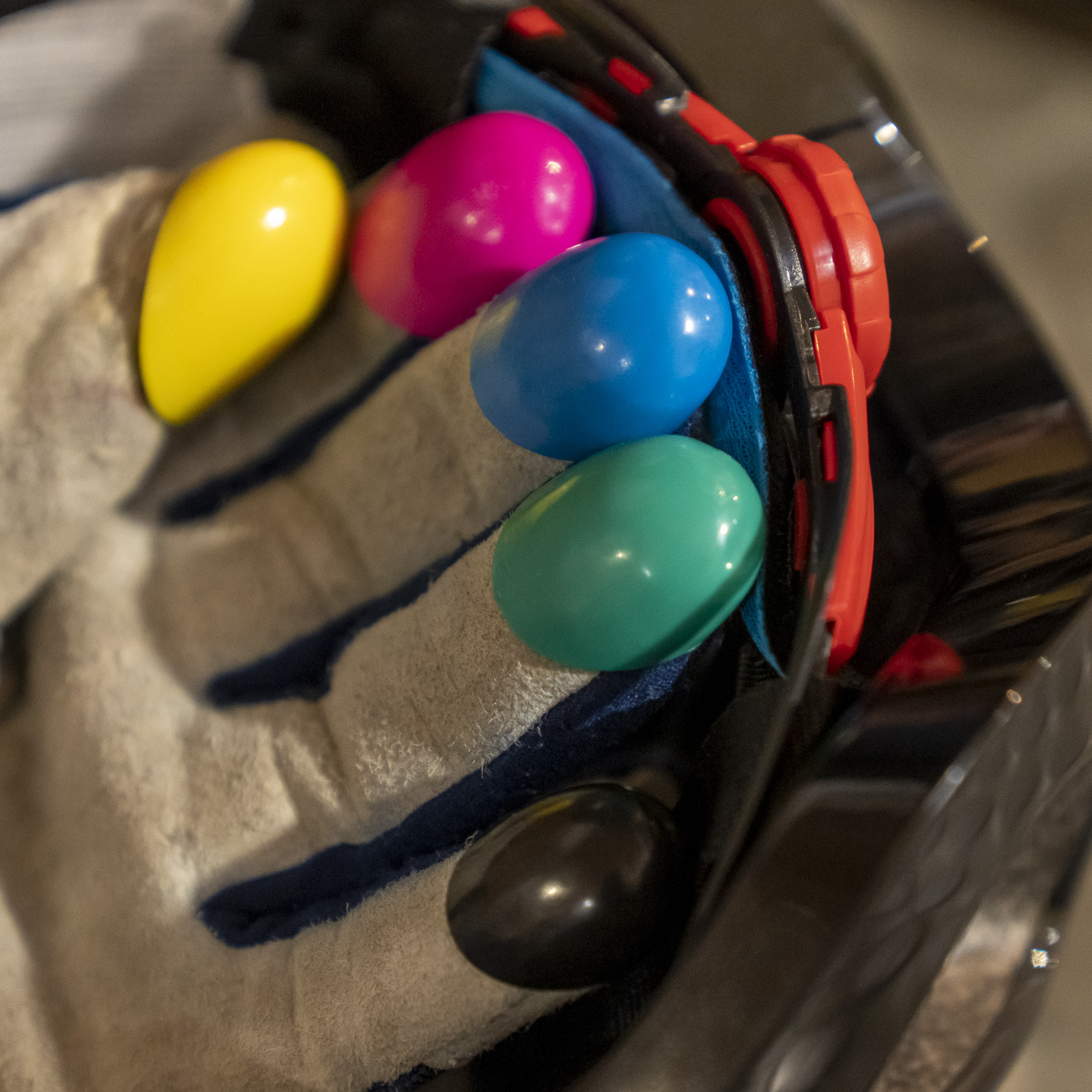 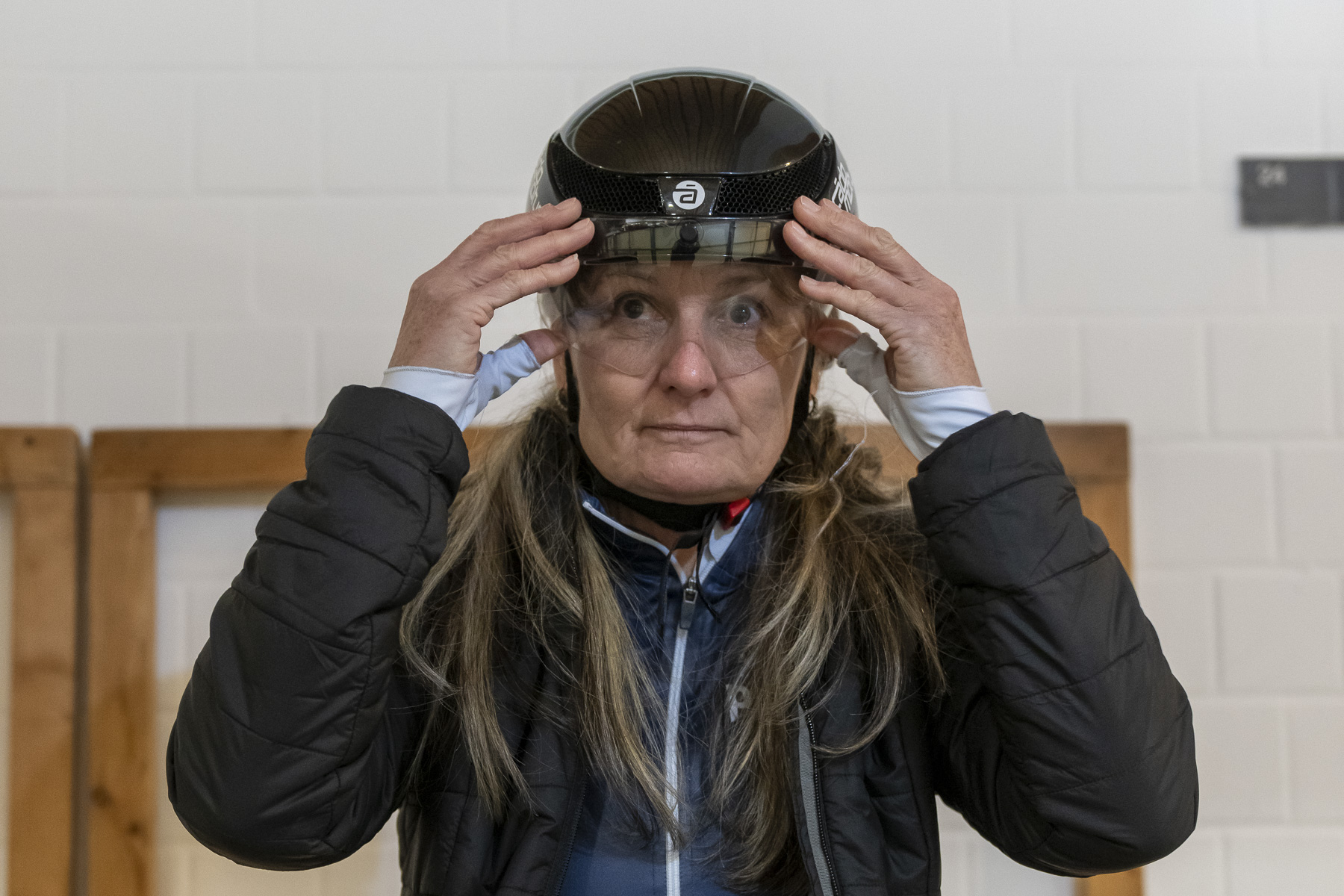 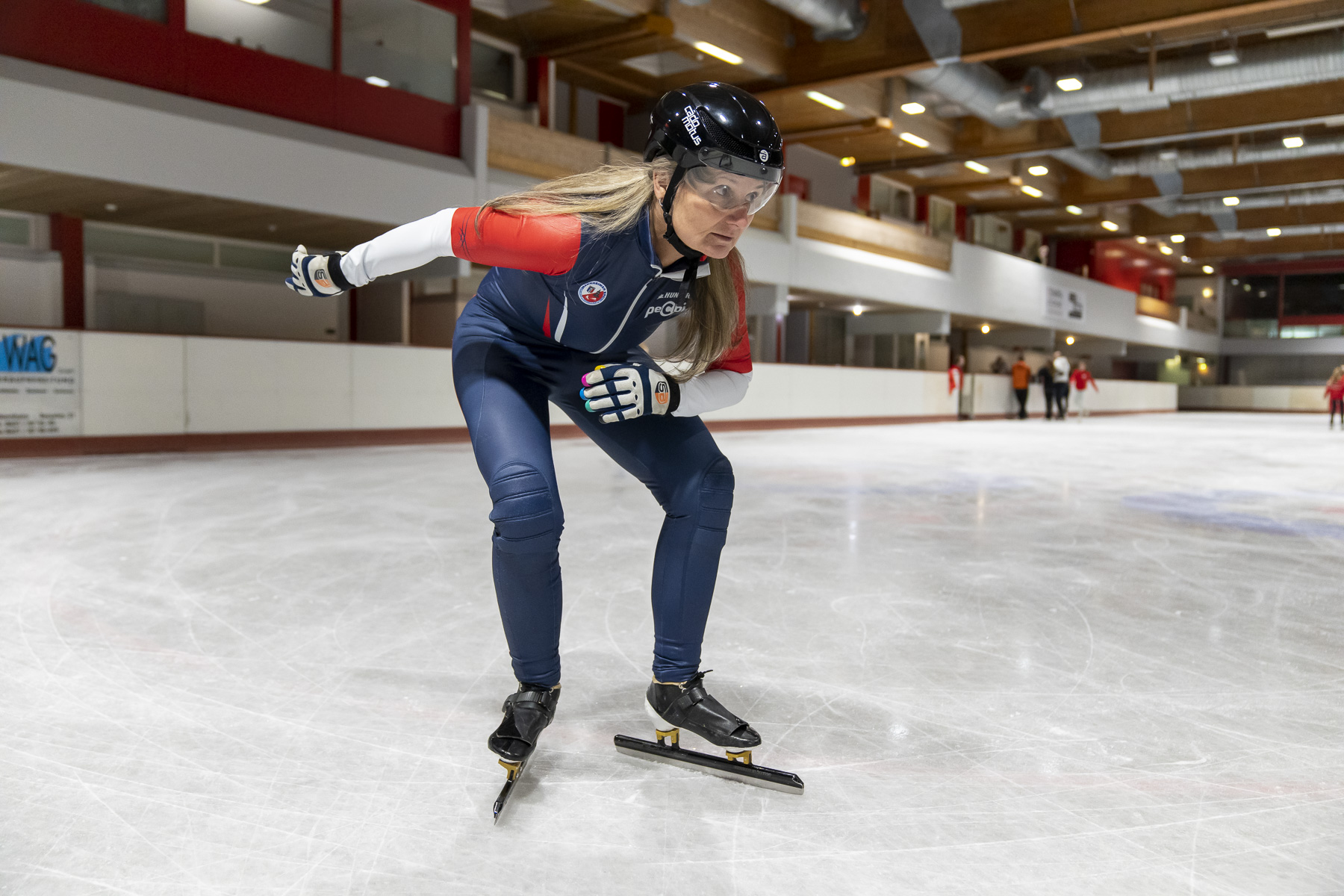 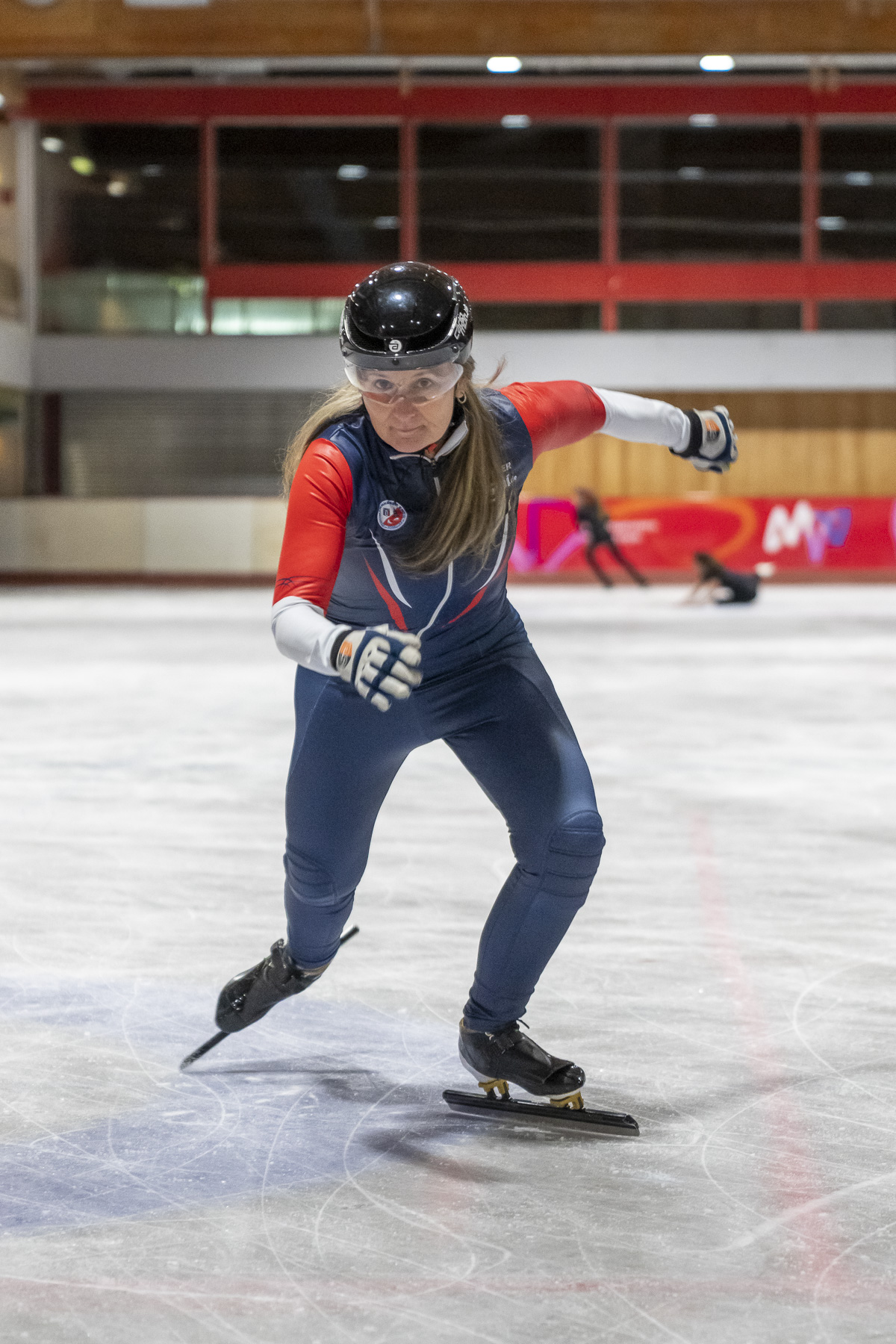 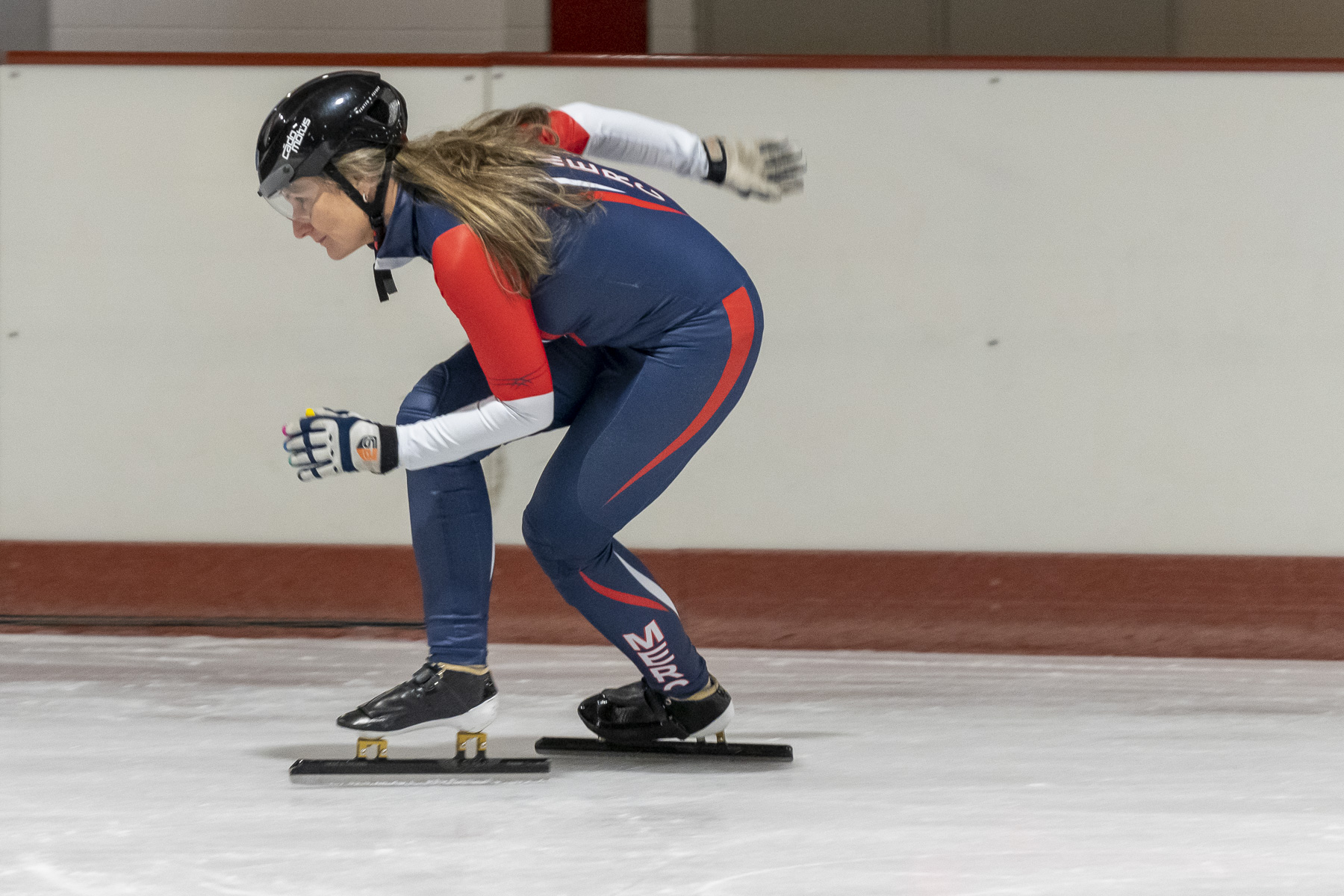 Finding the groove to glide over the ice. 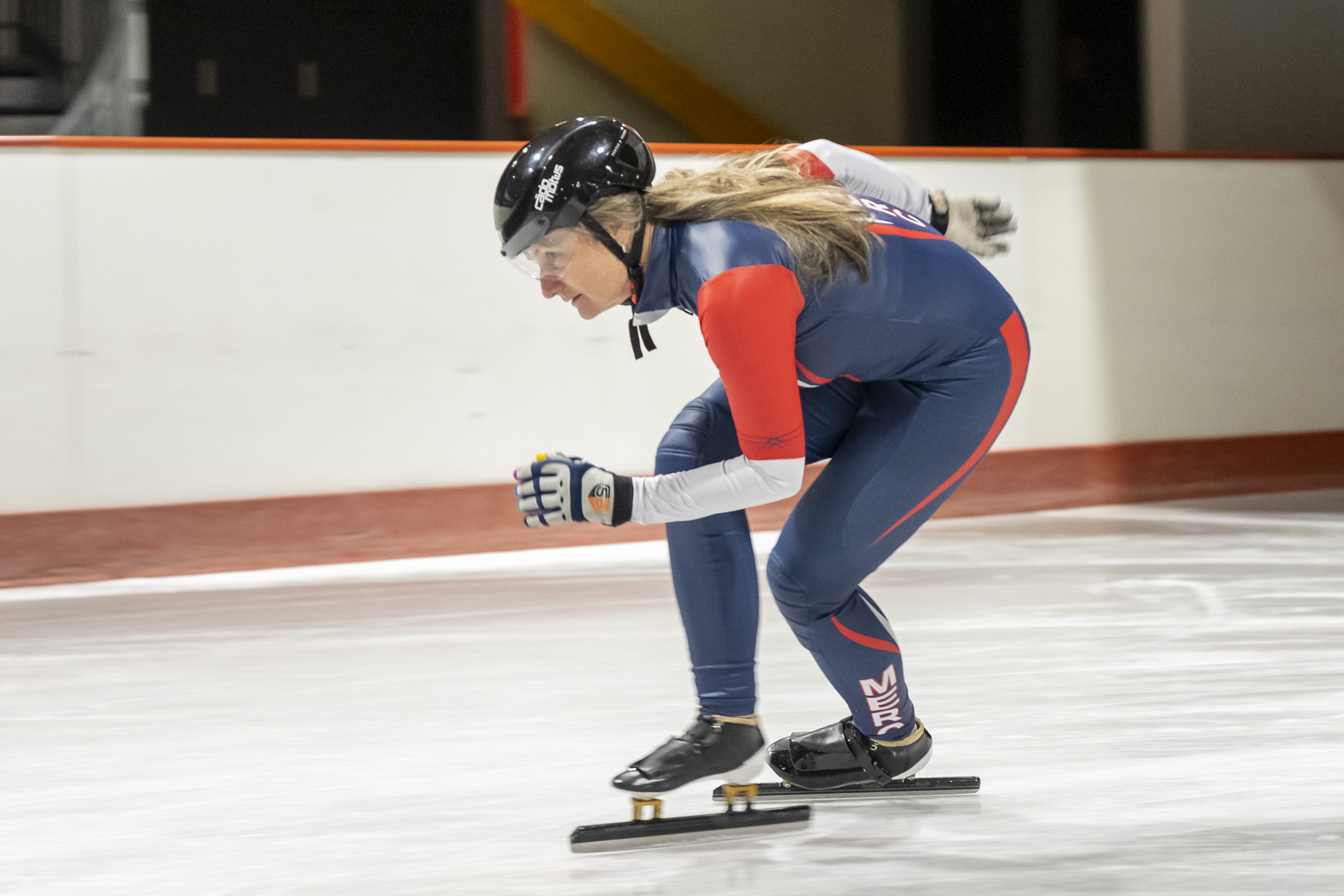 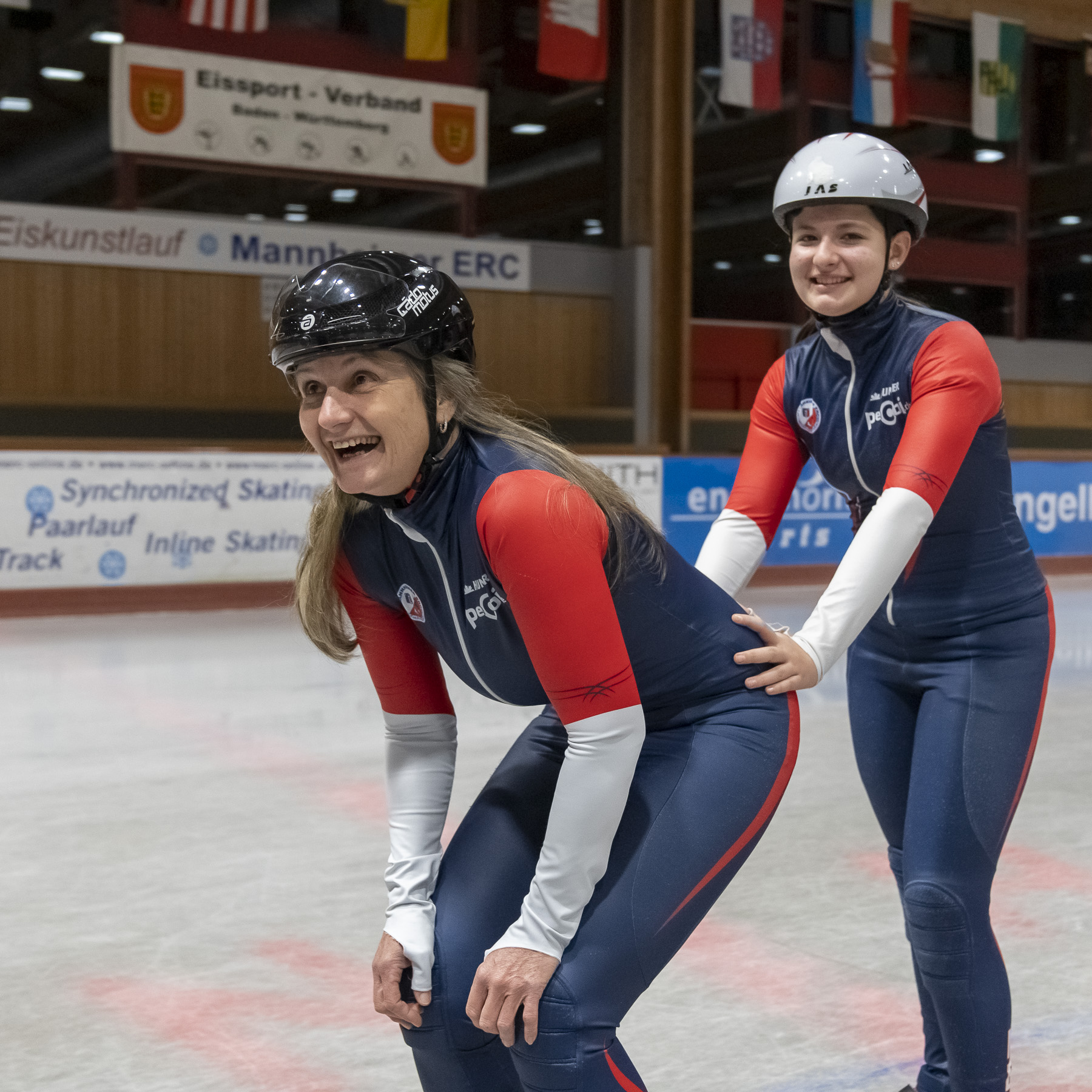 A passion she has passed on to her daughter.

Gundi fell in love with skating in the 60s. Standing on the ice with two and a half years for the first time she followed her sister Karin Gramminger who was a figure skating talent. Her father was a man of action in the club. “He became a member of the club’s committee when the new ice rink was built in Ludwigshafen in 1971 and he founded the speed skating section,” Gundi remembers. At the age of nine she tried out speed skating. At age twelve she turned her back on figure skating altogether, dedicating herself to the speed discipline from then on. She trained very hard. And a lot. And very fast. She participated in the Olympic Games in Calgary, Canada for the first time in 1988. 1992 marked another milestone: Short Track became an Olympic discipline. Her discipline. With a 111-metre long, oval track and four to eight athletes at once. Large-group starts were particularly exciting. The native of Ludwigshafen and fastest German short tracker was nominated to take part in the Winter Games in Albertville in France—and in the end had to watch the race from behind the barriers, because the officials made a formal mistake after the reunification of Germany. “That was a bitter pill to swallow” when she looks back on the event.

Gundi glides on along the track with her red-and-blue MERC racing suit. Today’s training is in preparation for a competition: marathon training for the ‘masters’, the high-level squads and active athletes under Gundi’s supervision. Her black helmet passes the barrier in front of us time after time. Behind it, her eldest daughter Jennifer stands with her back towards the track revealing the writing on her black hoodie: ‘Short Track Mannheim.’ The 33-year-old leans forward and helps with lacing up the skates. She trains the beginners’ section—the little ones, who will push plastic seals over the 111-metre ice track, which helps them keep their balance. Through tunnels built of mats and across the sheer ice surface. Just playfully. However, this training aims at competition. The children are excited. They too want to race over the ice at 50 kilometres per hour, ram their blades into the track and lean into the curves one day.

“Jennifer was born after the Olympic Games in Calgary,” Gundi says. Four years later, after the Albertville Olympics her other daughter Desiree was born. Another four years later her son Patrick was born—between the Winter Olympics in Lillehammer and Nagano. The three of them grew up at home in Oggersheim—and in the ice sports centre in Herzogenried. The daily routine is neatly and strictly organized. Gundi’s night shift as a nurse in the Ludwigshafen hospital ends at 6.30 a. m. Having finished her work she heads home, makes sandwiches for the children, helps them to get ready for school. Next task: housekeeping. Then she takes a nap, cooks for lunch, leaves the house at 4 p. m. to head for the ice rink with her children. Training. First with the little ones, then with the beginners, later with the advanced skaters. And Gundi also trains herself. To stay in shape. And to unwind—to feel free and light. Gliding over the ice, she feels nothing but speed and the sense of the moment.

The clock in the hall is ticking. Gundi skates the penultimate round. She keeps gliding over the ice steadily. Her cheeks have become slightly flushed and her breath has become a bit faster. As a referee, Desiree waits in the middle of the track and casts a watchful eye on everything. The 29-year-old gets up early every Sunday to teach people at the skating school and she lends a hand whenever it is needed in the MERC. “We are like a family,” she explains.

The marathon training session takes 15 minutes. This is a really long distance when you think in short track terms. Gundi skates along the black cones that her son Patrick placed on the ice before the training. They mark the track. Patrick trains the advanced skaters together with Gundi—on a voluntary basis, like all trainers in the short track section. At age 16, he went to the national short track centre in Dresden and stayed for five years. He trained and matured there returning to Mannheim as an adult.

“You learn so much in competitive sports,” Gundi says smiling. “Discipline, persistence, stamina.” And: “It builds your self-confidence. As you can see!” She points to her children with a dynamic gesture. She can hardly speak quickly enough to release everything she wants to tell—particularly when it’s about the club, its sense of community, young talents, the promotion of junior athletes and also about the lack of funding.

Last lap. Gundi leans into the curve once again. The cool air of the hall blows in her face and a radio station’s playlist booms over the speakers. Her husband Rudolf stands in the gallery. The two have known each other from their school days when Gundi had long since slipped into her attachable skates. Her passion hasn’t gripped him like the rest of the family. However, he has always been there. Watching them from the barriers, driving the caravan to the next competition or picking the children up from training. “Our father has always been a source of tranquillity,” Jennifer says. In the midst of the fast reality of the ice sports centre, where the cool air warms their hearts. And he has never stopped being so. Especially when there is a lot at stake. Like in Nadine’s case. Not long after her birth, Gundi’s youngest daughter became a MERC member: Her mother turned a paper bin into a playpen and moved her across the ice. Today the 14-year-old competes in the D junior girls team and is part of the state’s squad.

Gundi comes in second narrowly. She straightens up and puts her hands on her thighs. Slowing down she slides out, breathes—and smiles. 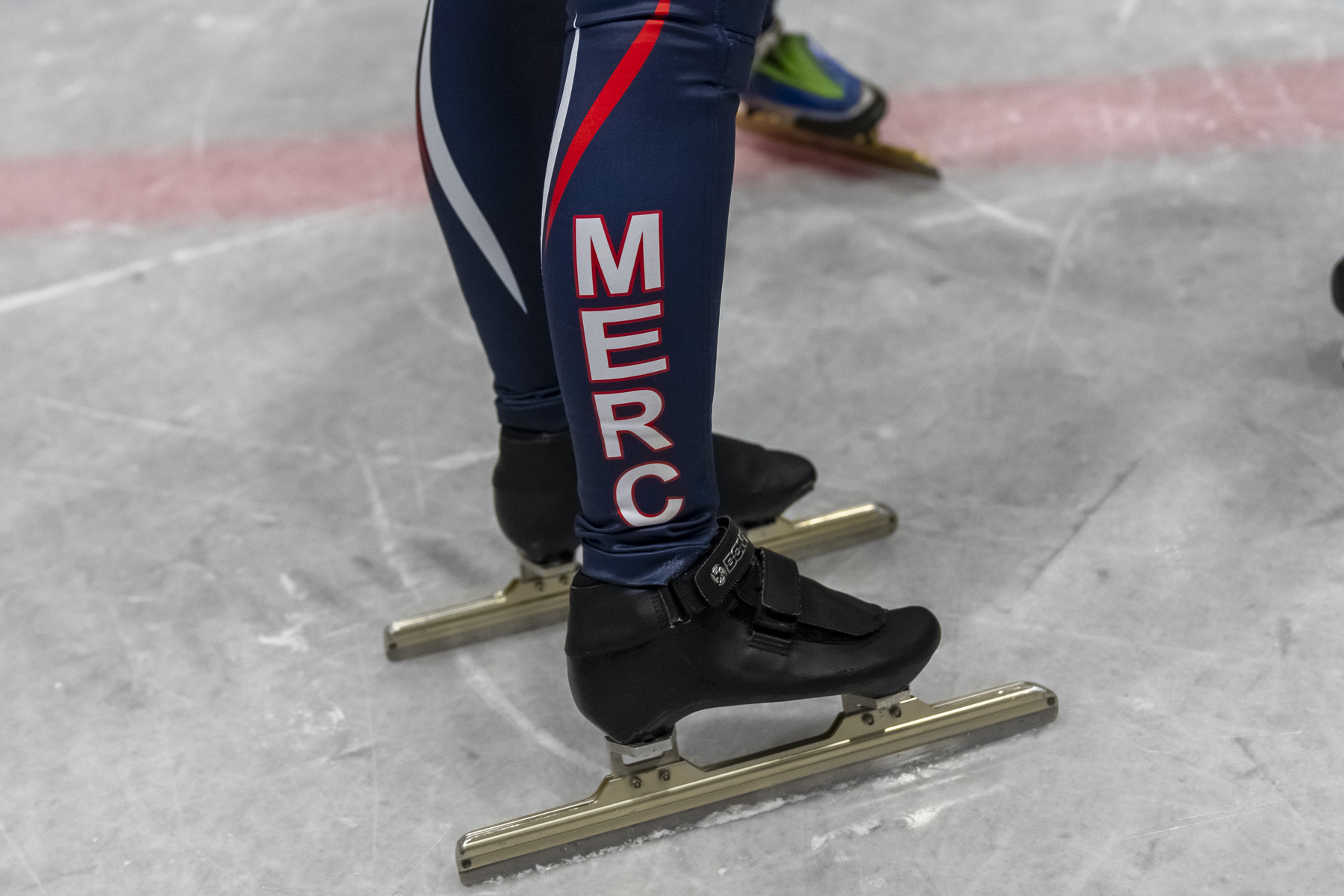 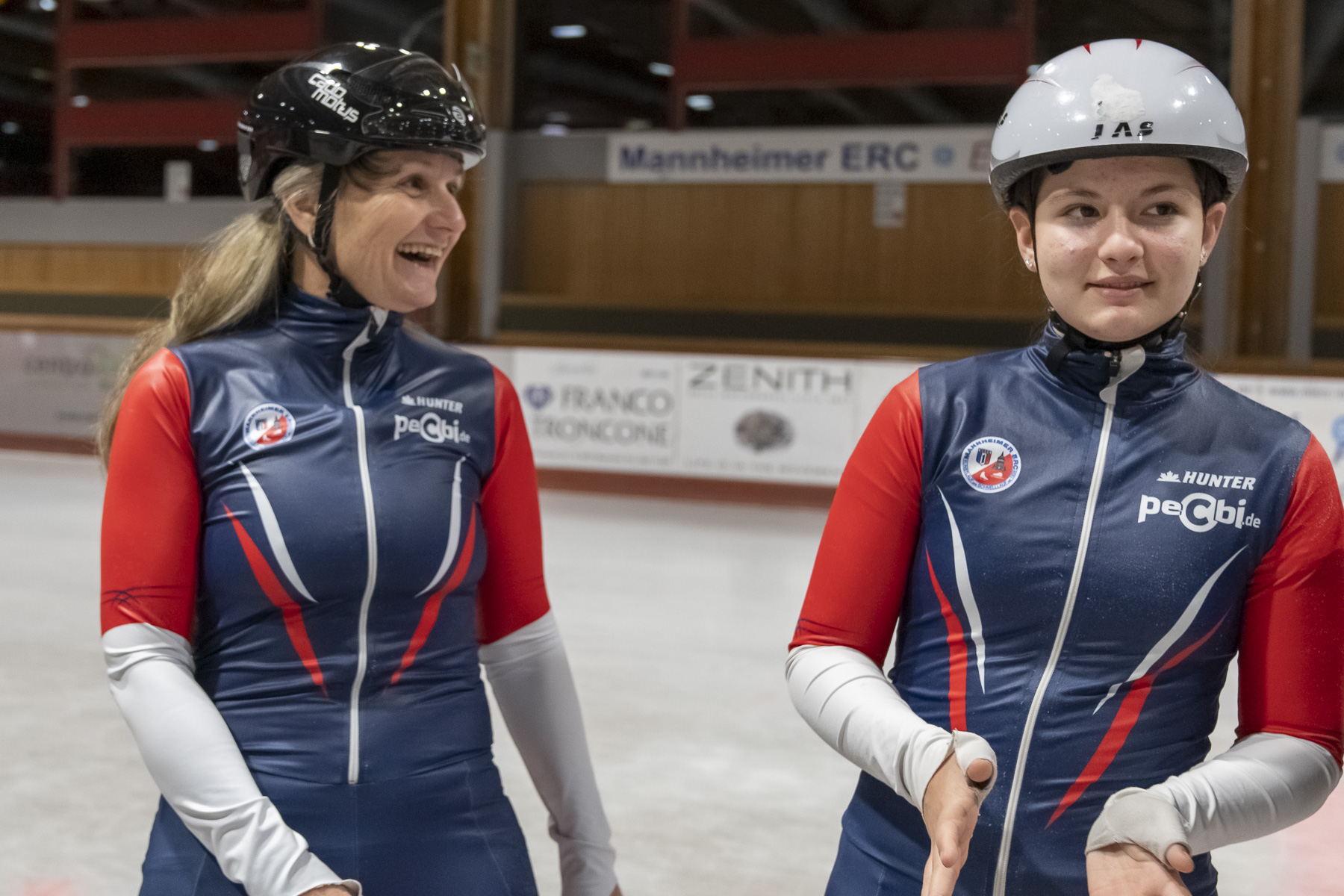 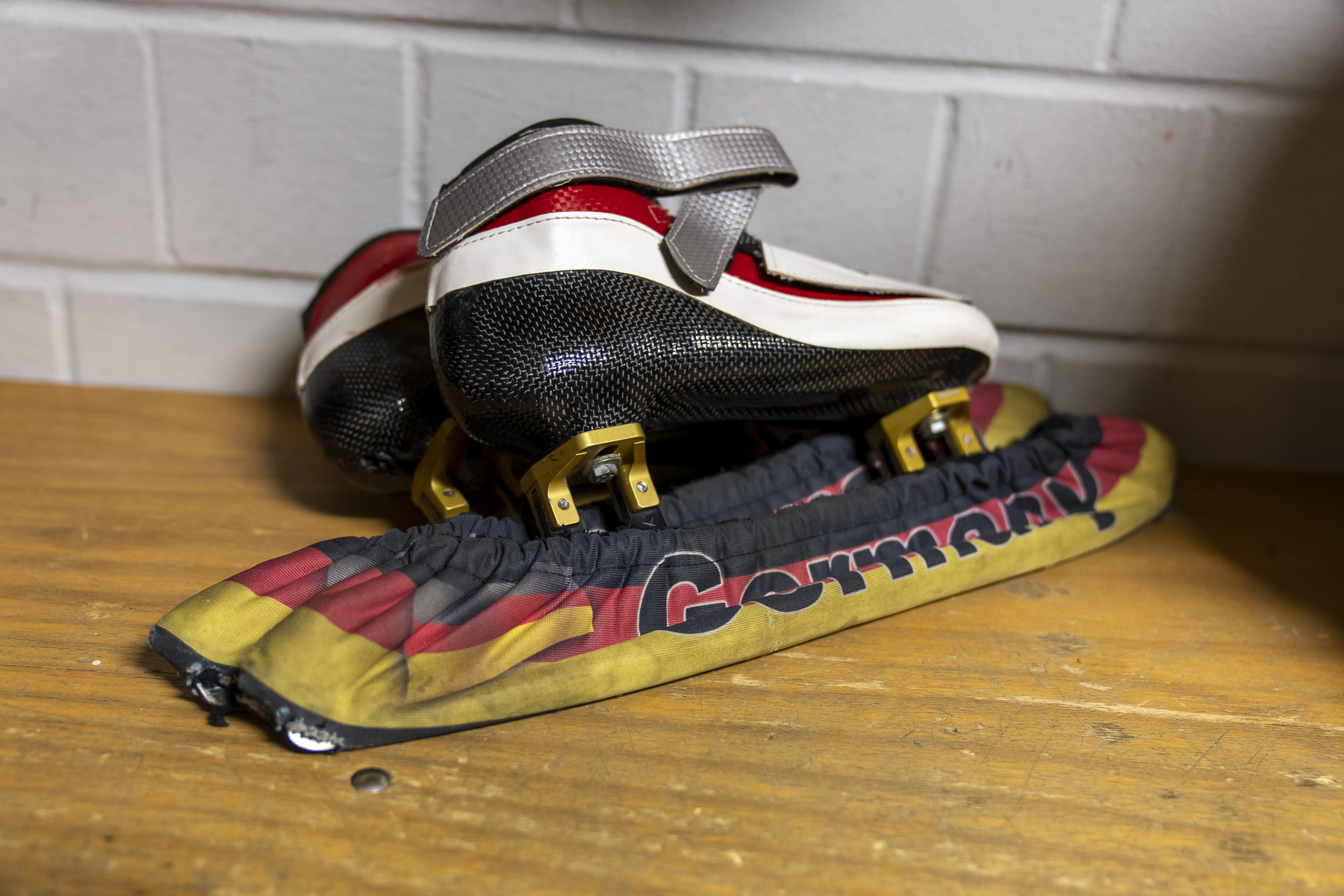 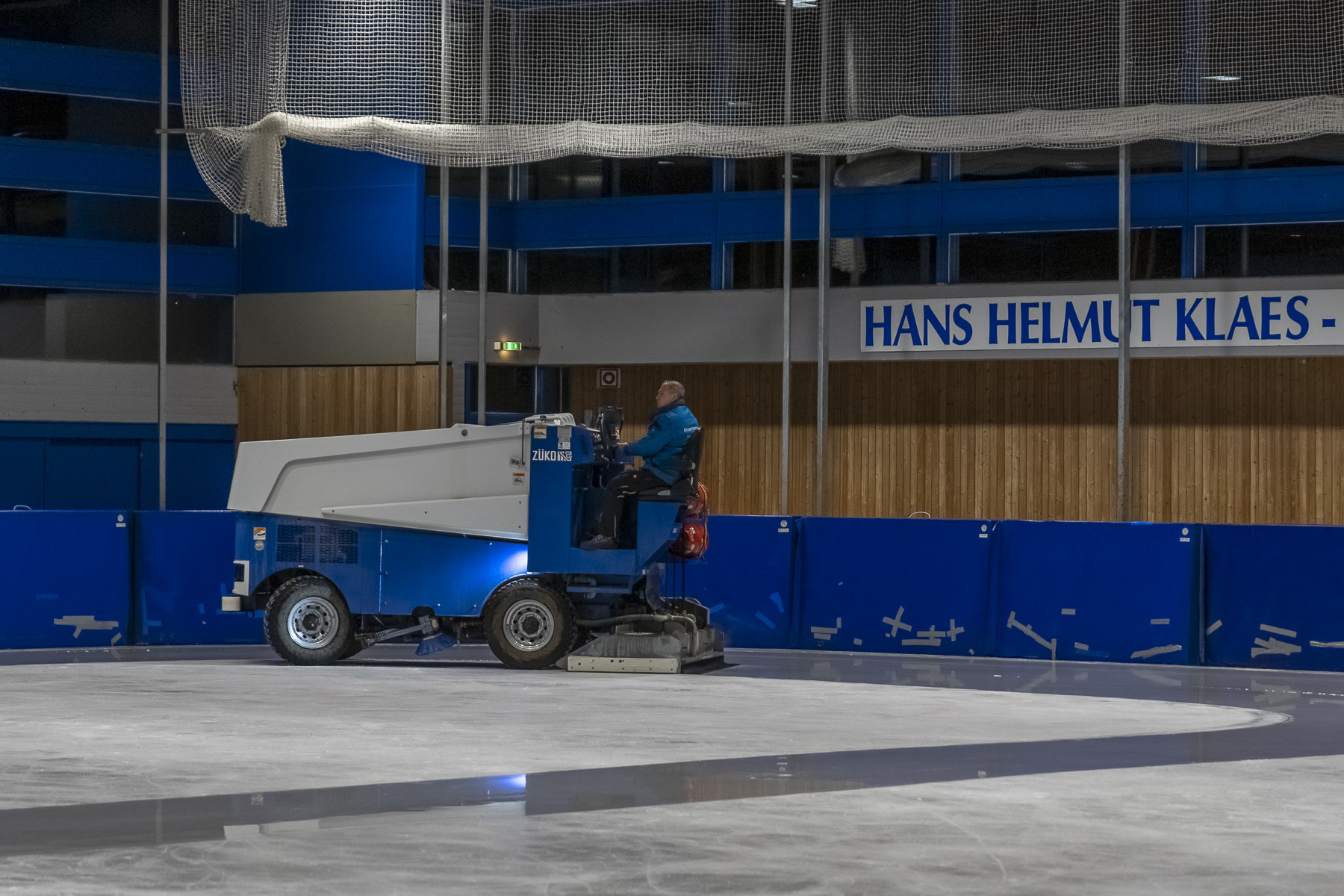 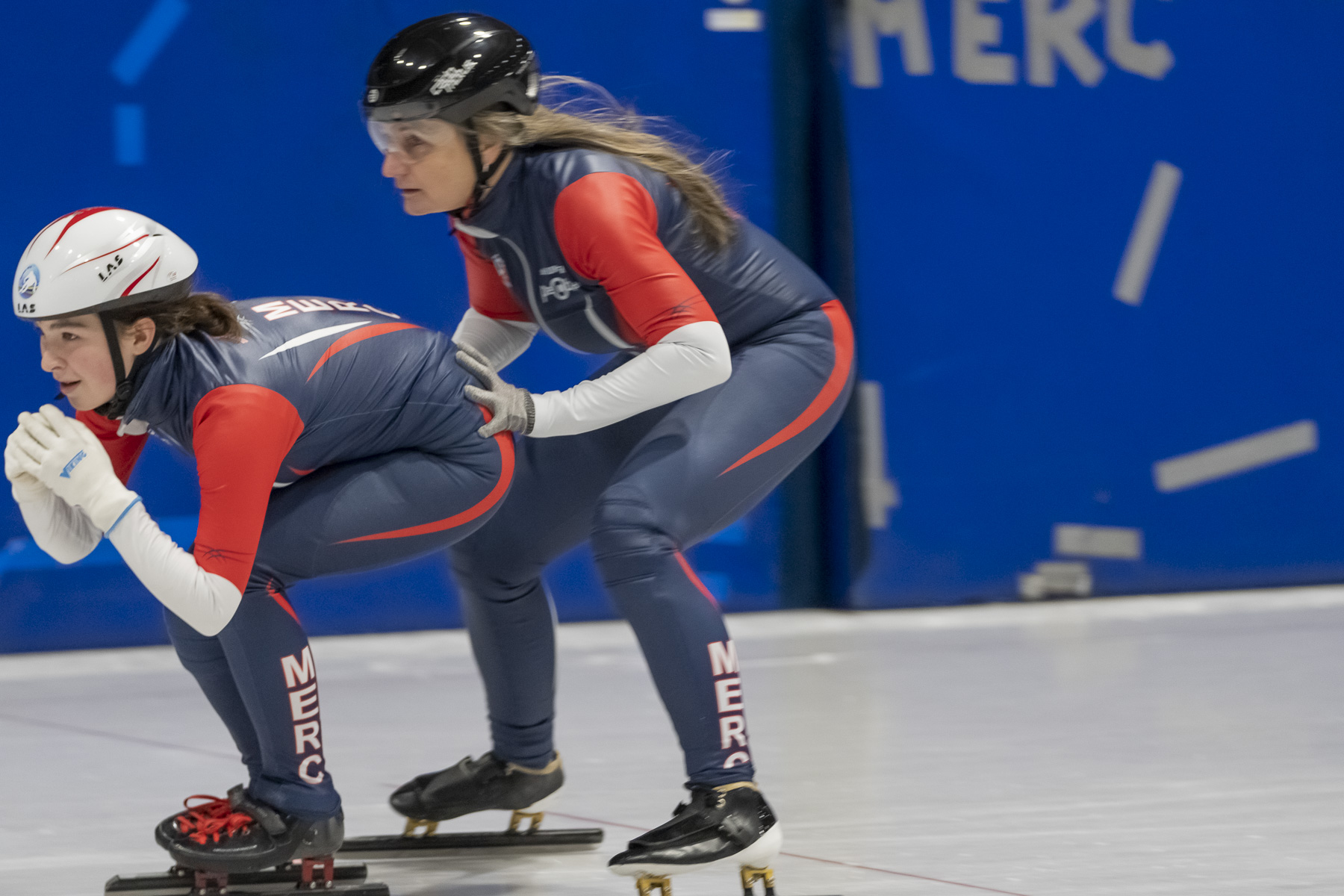 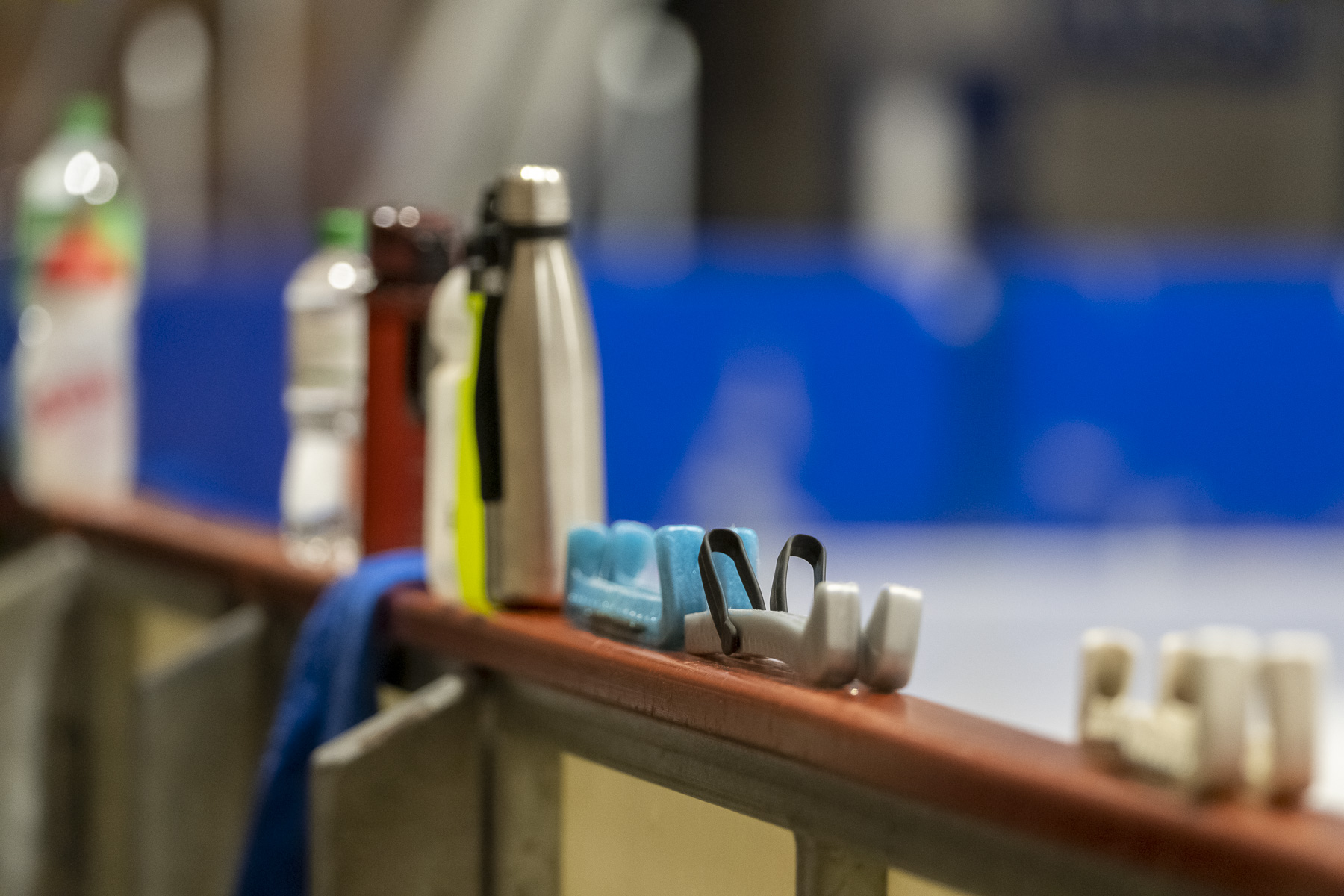 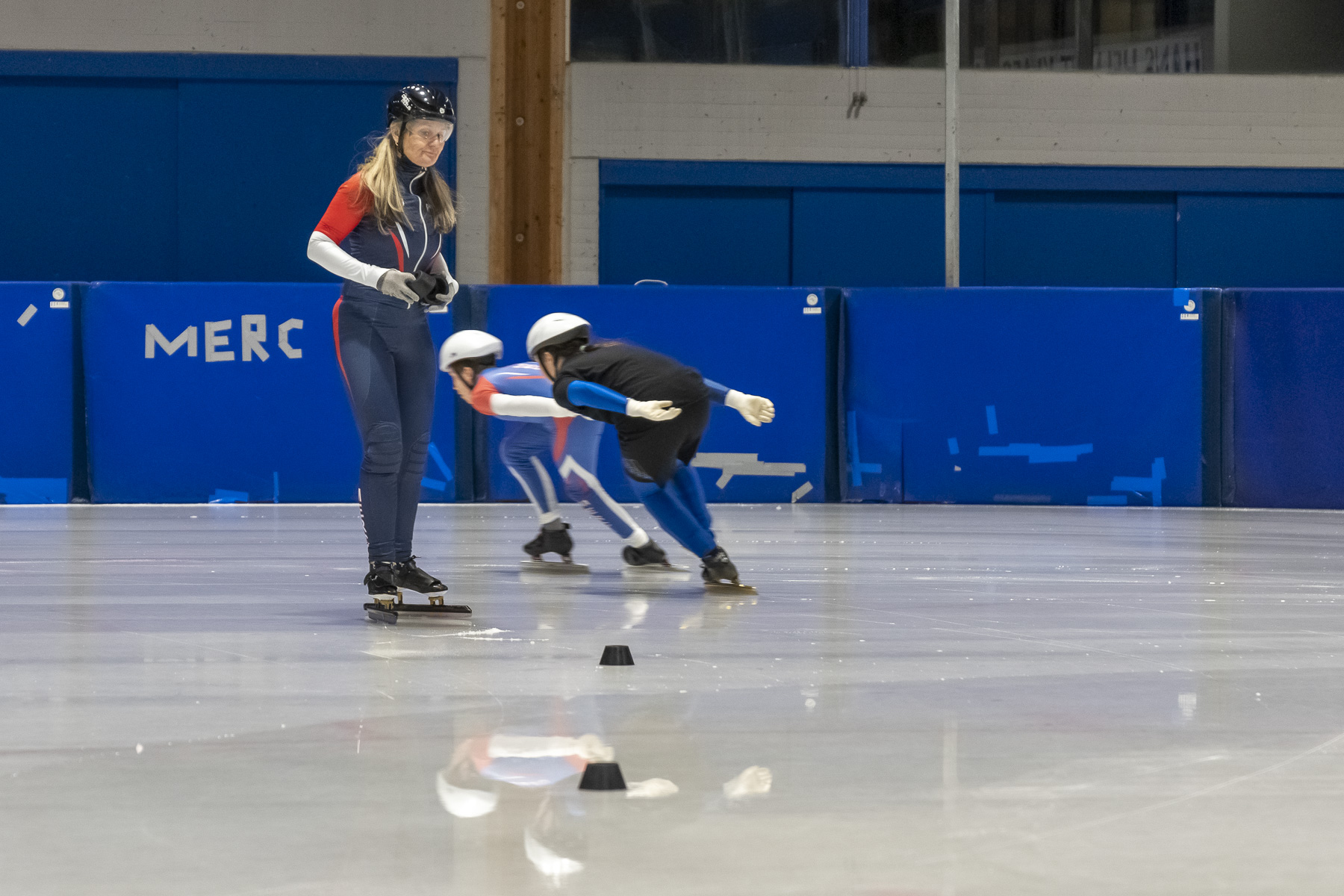 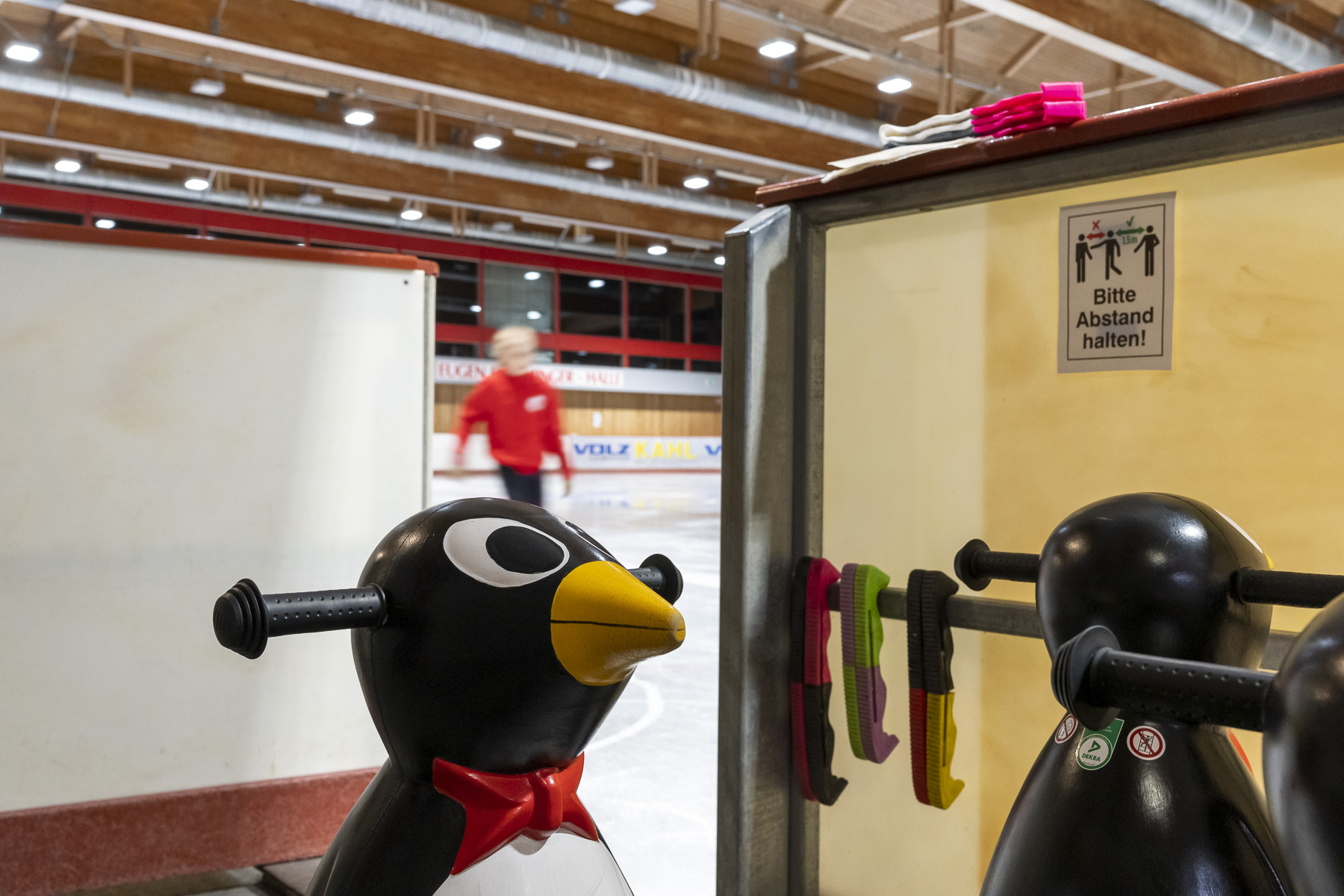