Once, blue-blooded gentlemen took part in prestigious races in Mannheim. And the fascination for thoroughbreds perdures to this day. On the Waldrennbahn racetrack in Mannheim-Seckenheim, this glorious racing tradition still continues. Marco Klein trains racing horses behind the idyllic turf track — in a unique family business.

In the early mornings, stallions, geldings and mares storm along in front of the empty rows of the stand of the Mannheim Waldrennbahn racetrack and an occasional passer-by pauses for a moment curiously observing the scene. The tranquillity of the place makes it hard to believe that it is located only a few-minute drive from the city. Foxes, rabbits and roe deer venture out of the shelter provided by the wood. However, on 5 or 6 days during turf season between May and October, when thousands of people flock to the horse racing venue to marvel at fine thoroughbreds doing flat or jump racing, they prefer to stay hidden in the bordering Dossenwald forest. 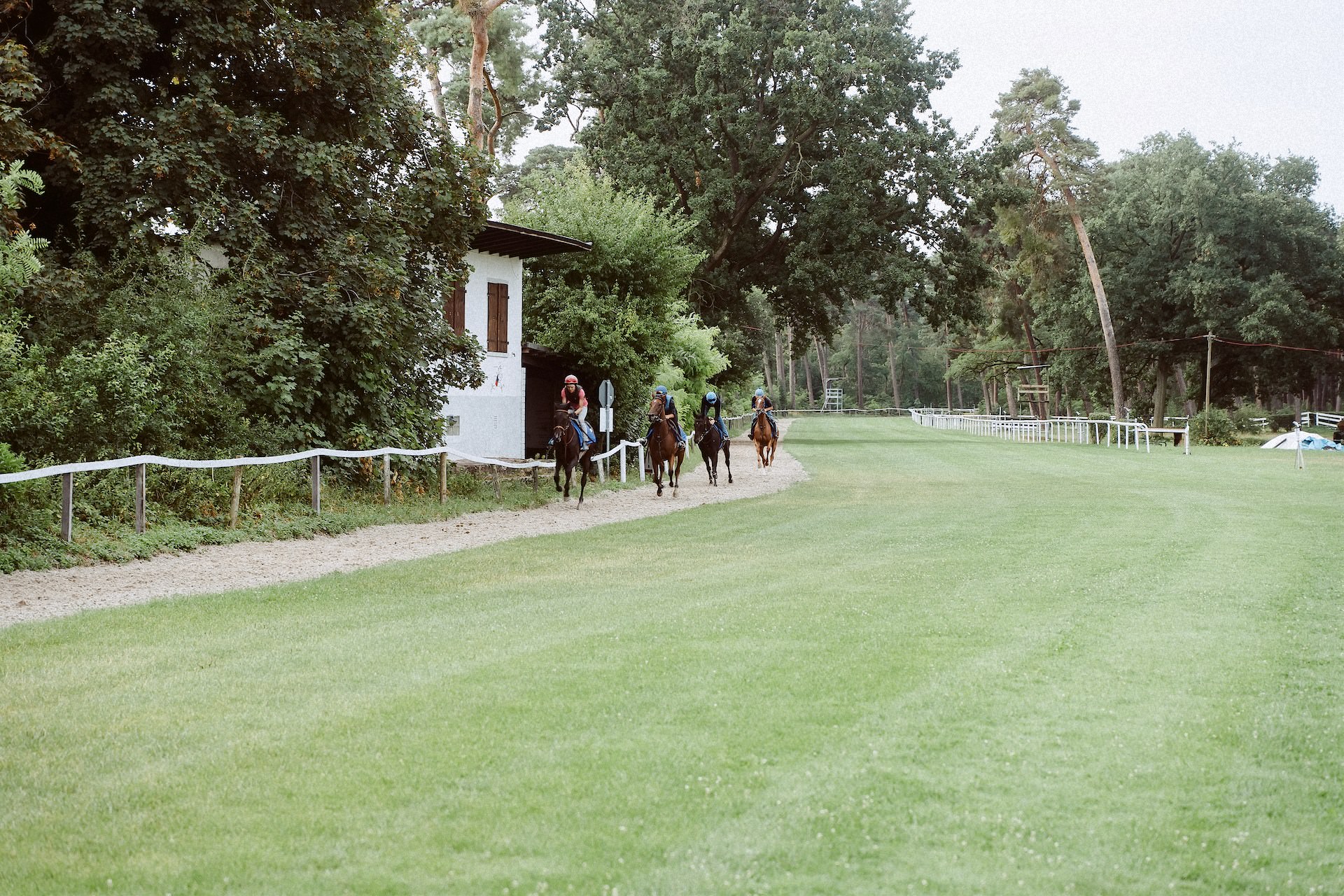 The Waldrennbahn racetrack in Mannheim-Seckenheim: The tranquillity of the place makes it hard to believe that it is located only a few-minute drive from the city.

Marco Klein runs a racing stable right behind the Mannheim turf track. It may sound odd, but he has never been in the saddle himself when gallop racings take place. But he knows exactly how to prepare thoroughbreds for it: “I don’t think anybody, including myself, would have thought I was going to have 32 horses entrusted to me in my stables, just six years after the establishment of my business,” says the former professional soldier, who served in three Afghanistan military missions. His time there taught him to stay calm even when under the utmost strain, he explains. “I had a hard time wrestling with myself to give up my safe paramedic post.” In 2015, however, the family from Viernheim unanimously decided to support his racing stable project. Since then, his father, his common law spouse, his sister and his mother have been pitching in. Marco had completed courses on expert horse training in addition to his work for a while already. As a licensed professional trainer, he has turned his passion into a profession. 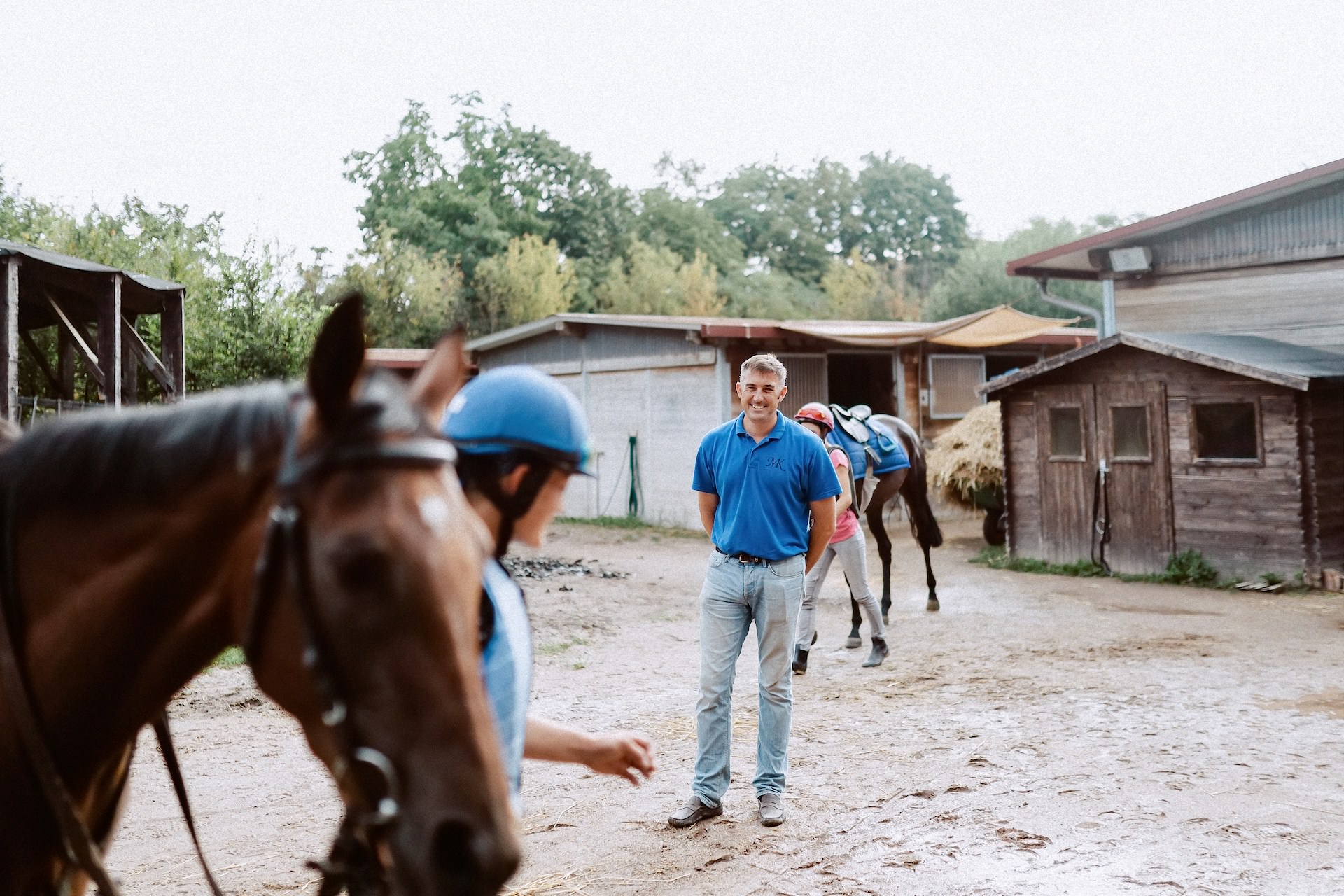 “Thoroughbreds are no overbred ‘racing machines’ but creatures with their own will,” says Marco. This makes it important to recognize the individual temperament, talents, needs and characteristics of every four-legged guest. Marco got to know horses that didn’t show any desire to make an effort in the group training sessions in Seckenheim, and would “explode” on the same venue during the racing atmosphere there. Some thoroughbreds are like actors that need an audience. “The horses clearly feel, if a race was good or not — which can happen due to tactical errors made by the rider as well,” Marco explains. This is why he picks up every single horse he is responsible for from the venue after the race, patting it—no matter whether it was victorious or suffered a defeat. He finds this important. 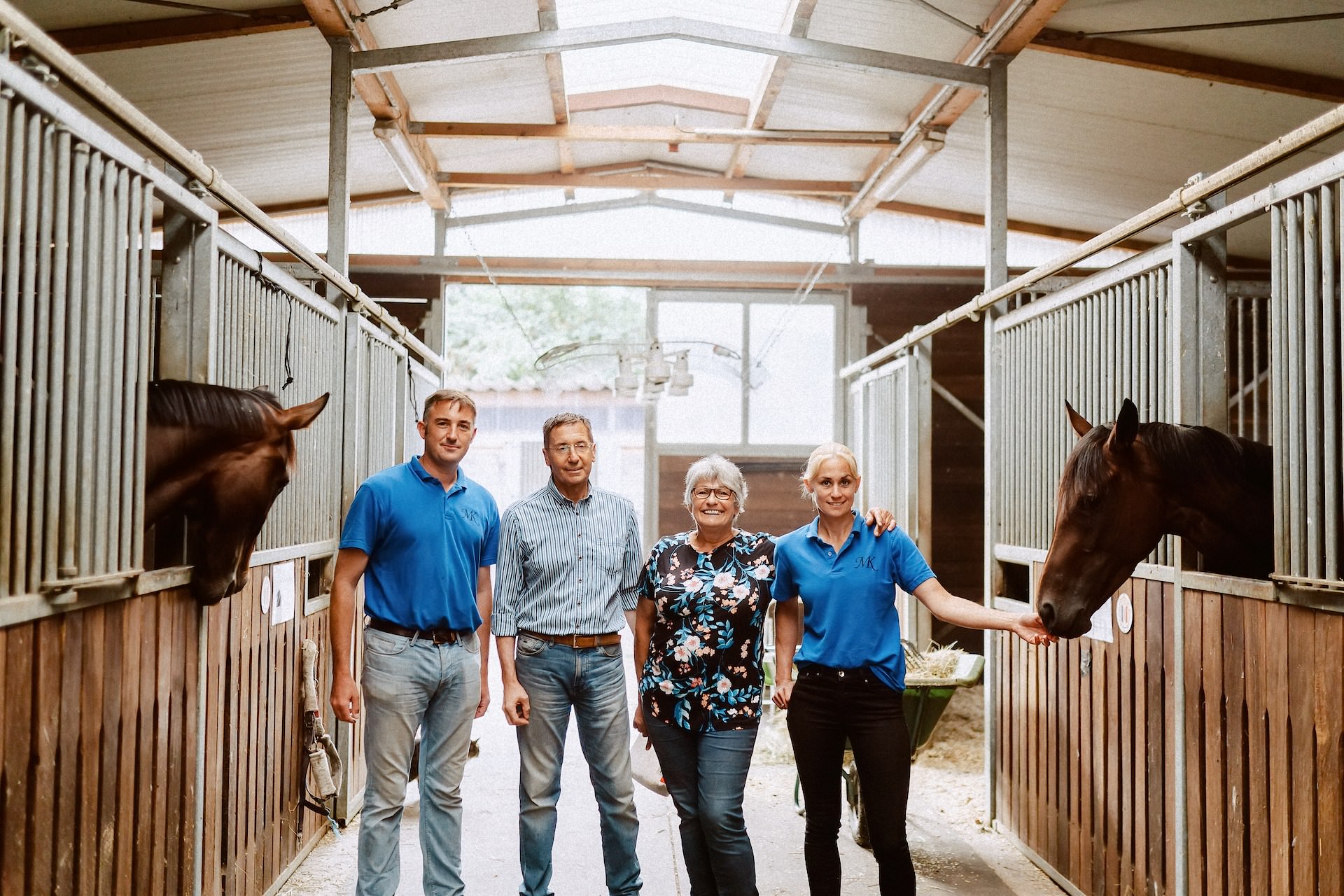 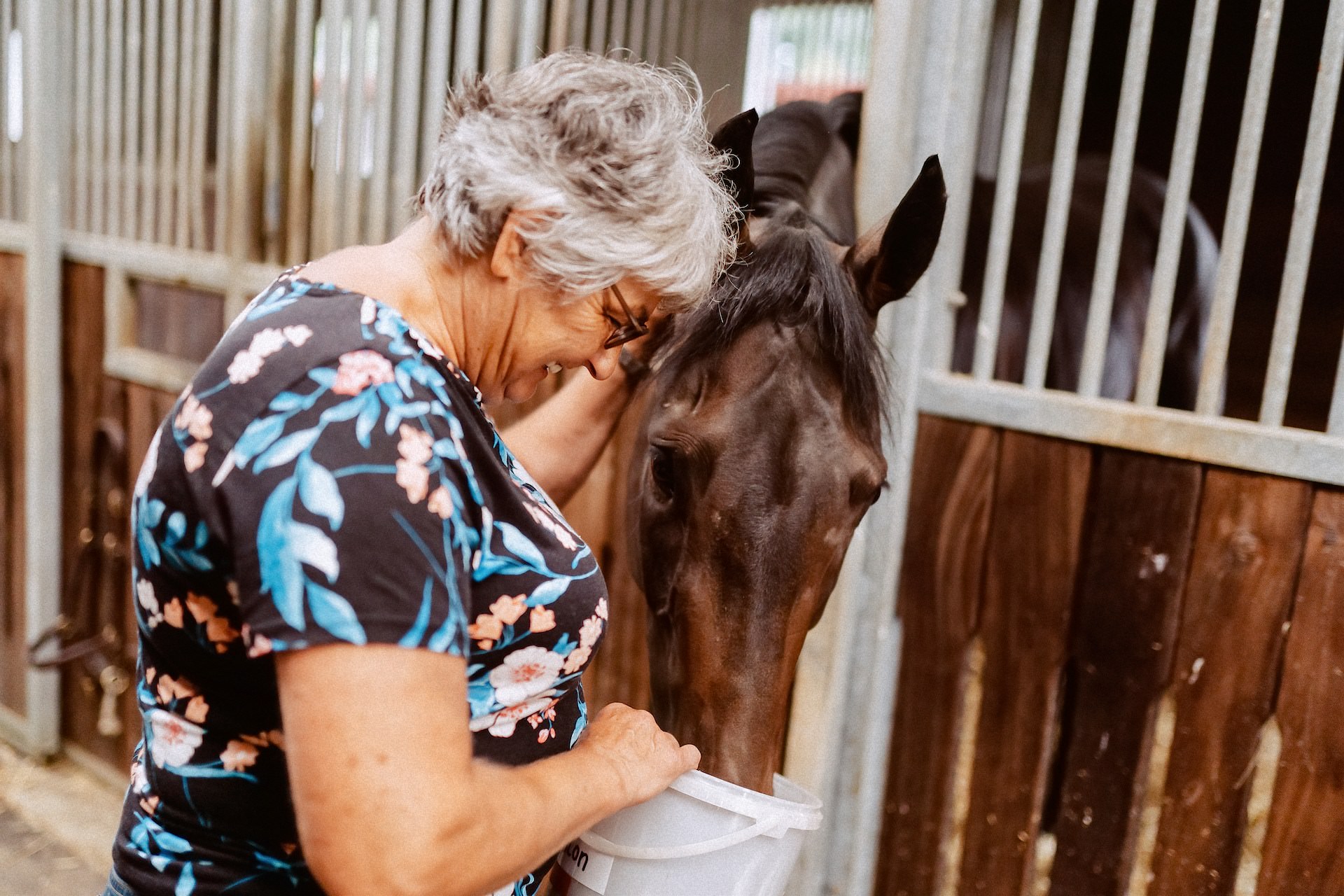 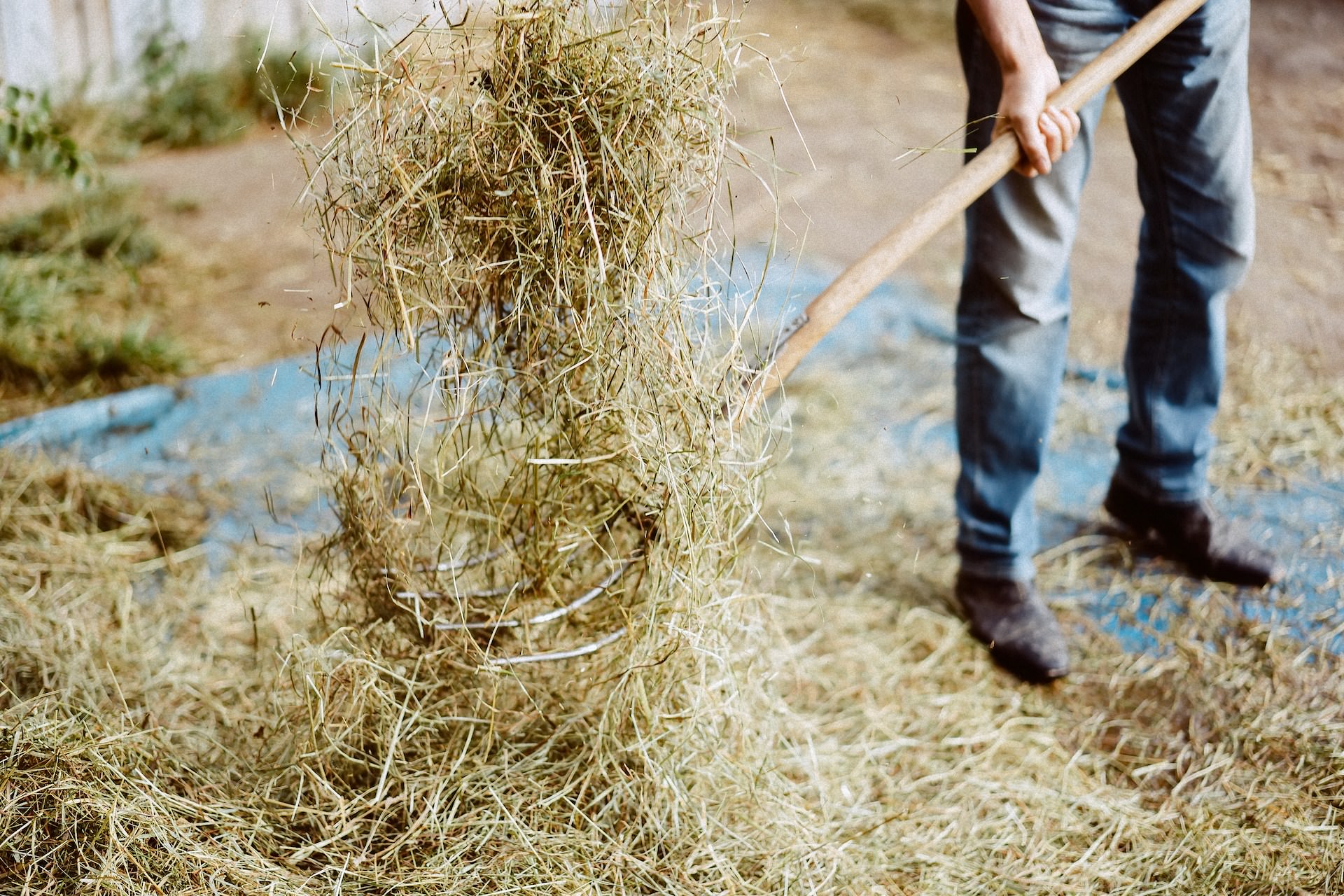 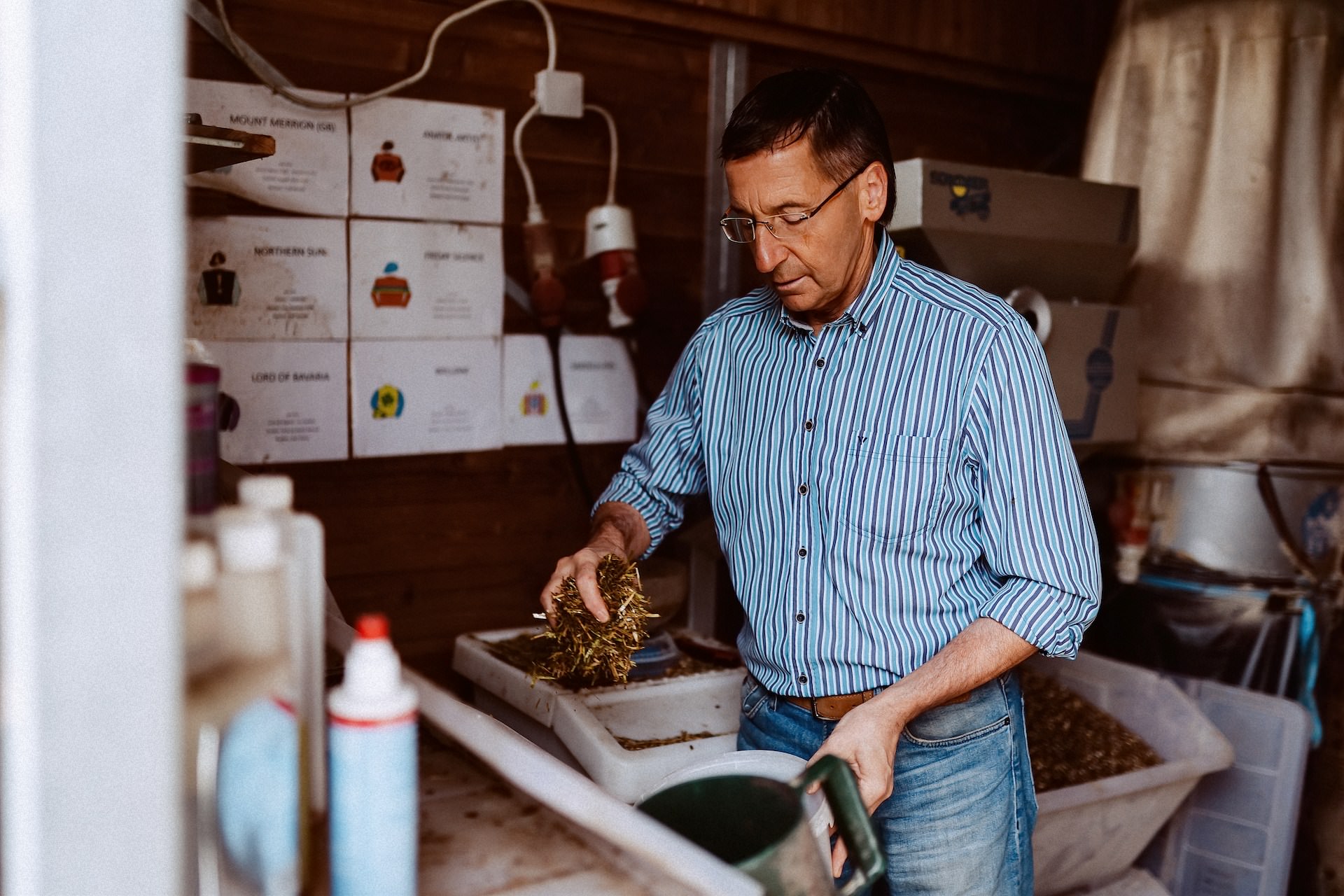 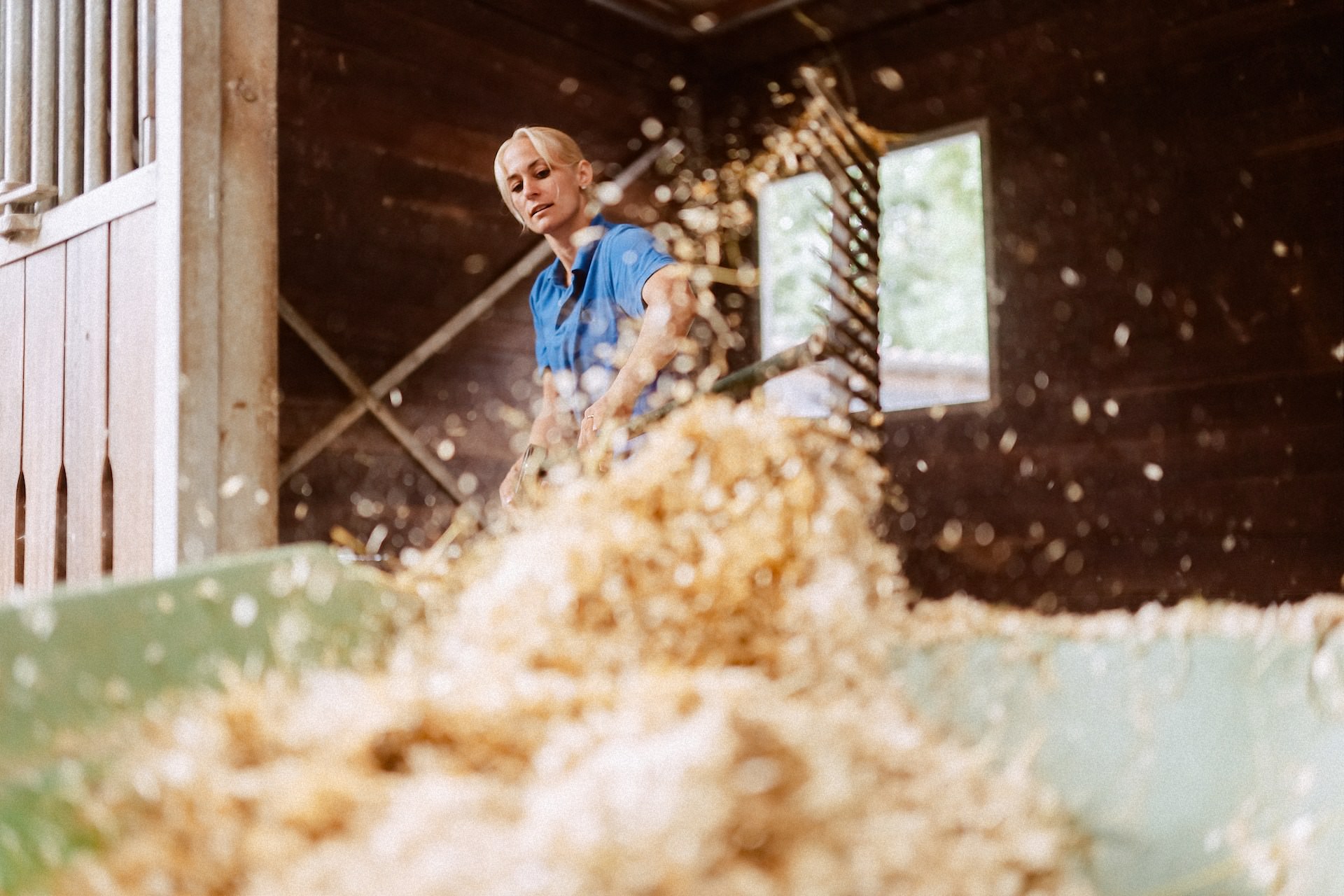 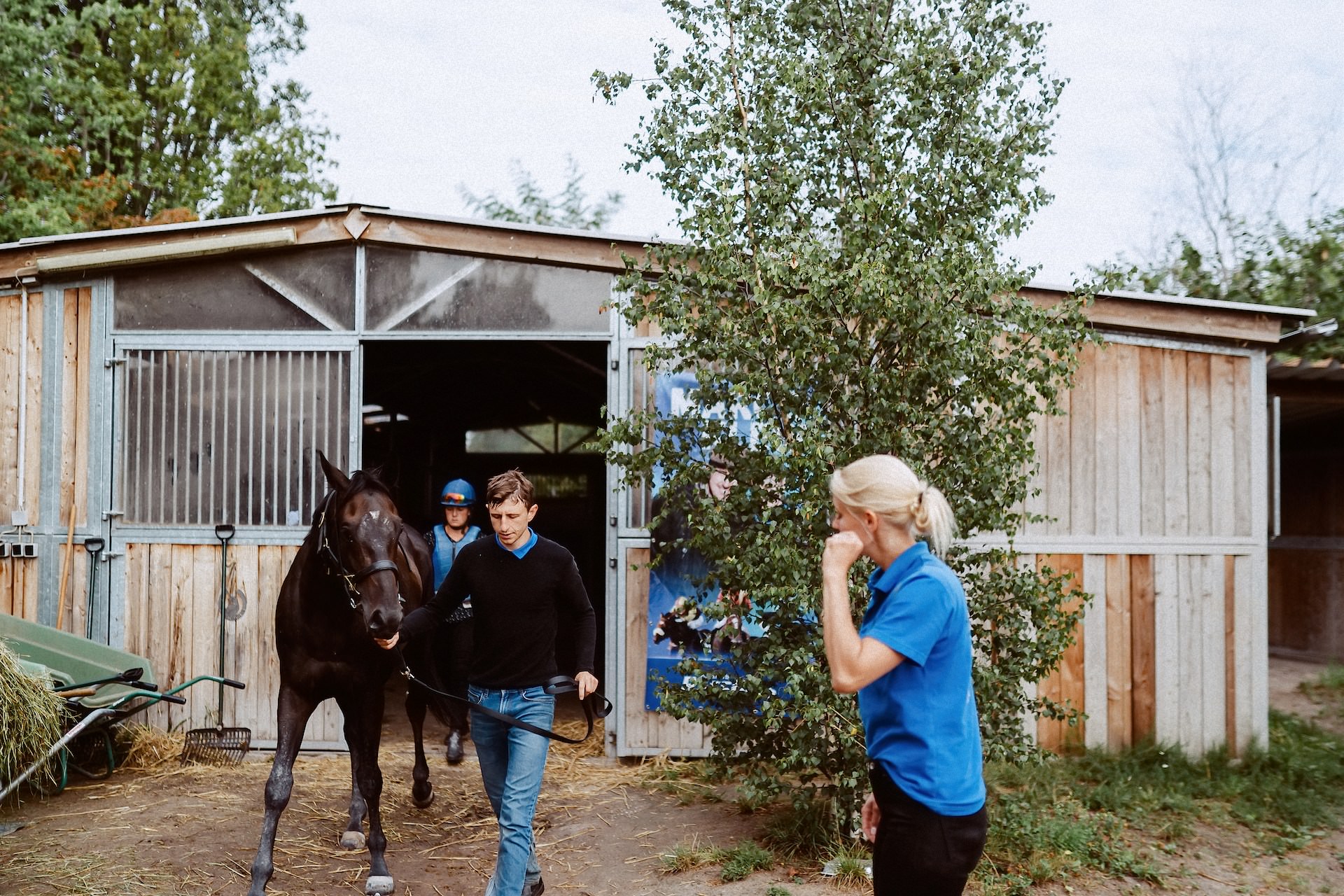 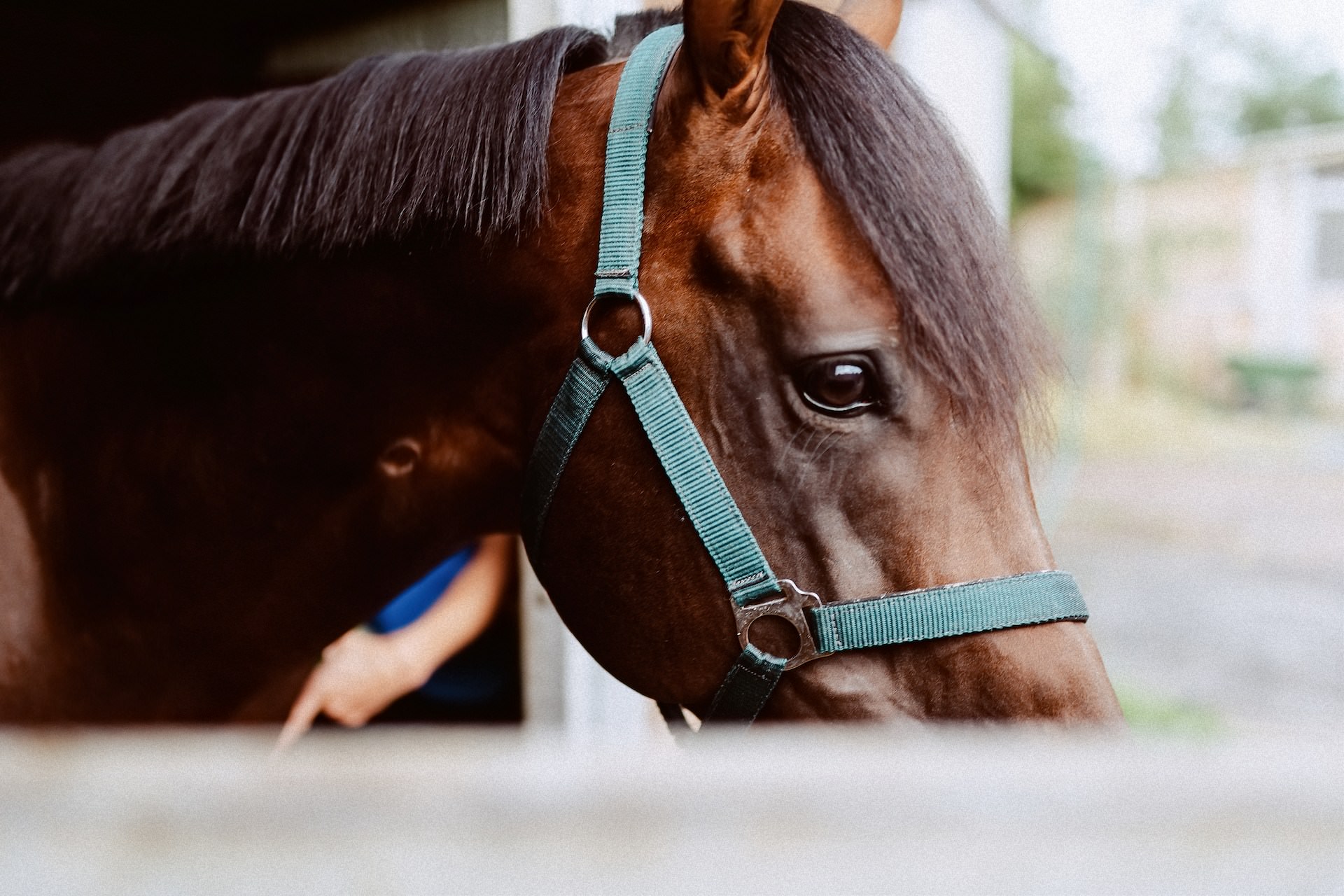 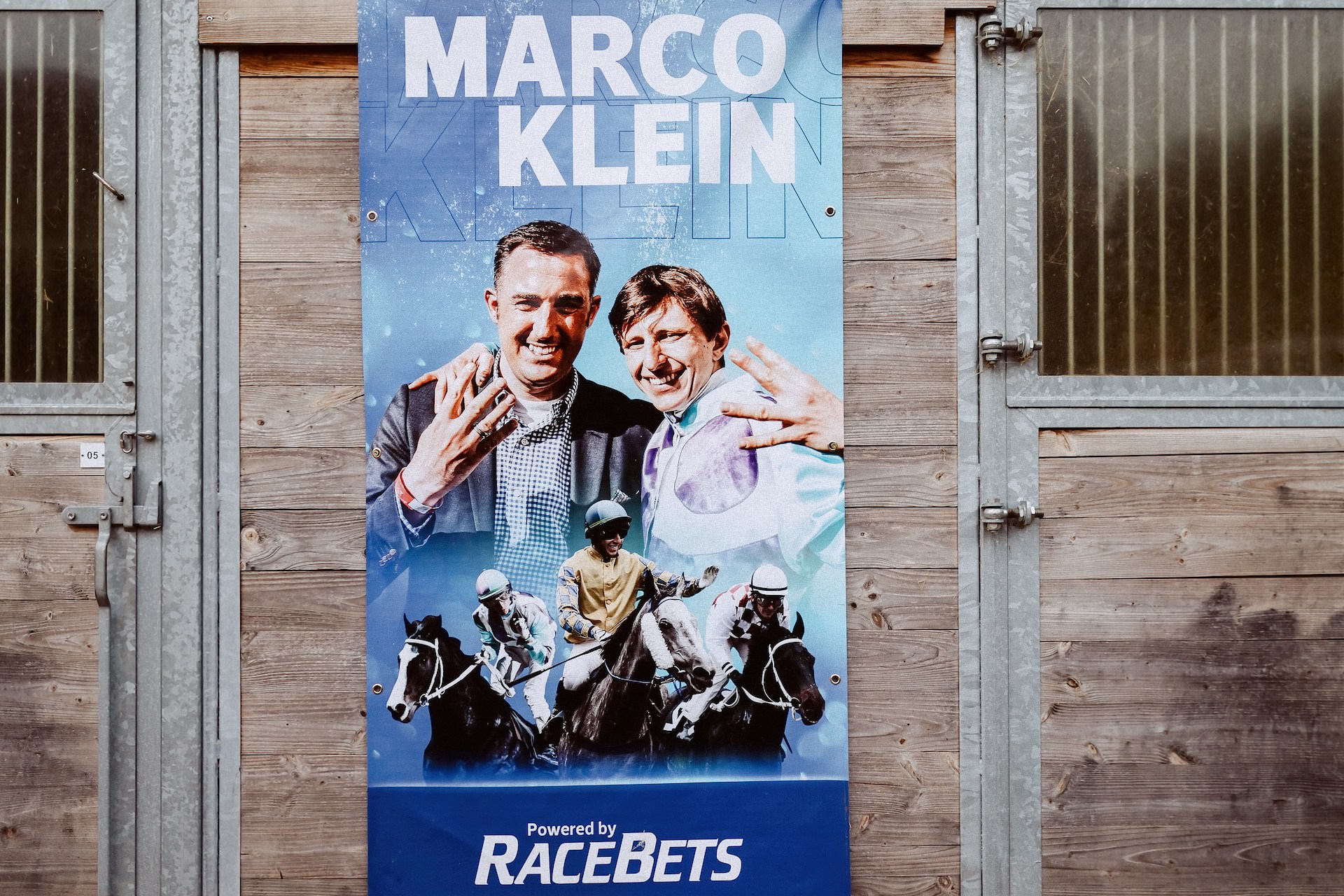 Before the First World War, thousands of people used to flock to the old turfs just below today’s Fernmeldeturm telecommunication tower, which now belong to the Luisenpark. These spectators came from all social classes: citizens just as much as Grand Dukes, princes and Royal Highnesses — illustrating that this open-air spectacle, organized by the Badischer Rennverein club that was founded in 1868, had been famous and unparalleled for decades. At that time, it was not soccer, but horse racing that was the number one discipline. However, after World War II, the club had a hard time: the racecourse stand was largely destroyed by bombing and the authorities then had other plans for the premises, which had only been hired by the club. The future of horse racing at that time in Mannheim was safeguarded by merging this club with another one: the Pferdezucht- und Rennverein Seckenheim with its Waldrennbahn racetrack of 1969 that was soon extended in a common effort.

Marco well remembers the beginning of racing here: The jockeys still used to be called Herrenreiter (literally: gentleman riders) then and were heavyweights, well above the current 55-kilogramme-limit. The director of the racing stable is constantly on the trot checking the diet for each thoroughbred, scheduling the daily training groups, briefing the blacksmith, who has just arrived, about which horse is to be shoed and the way in which this should be carried out. His phone rings in the meantime — after all the horse owners have to be informed about training, upcoming race starts or a health condition a horse may have.

Marlene Klein is the first one to be at the stable in the mornings, with oats and very special muesli.

The stable business requires teamwork: all hands on deck! In the mornings, around 6 am, the fine mounts crane their necks out of their boxes and neigh in excitement to welcome Marlene Klein. She is the first one to be at the stable in the mornings, with oats and very special muesli. “I used to be afraid of horses,” the mother of the stable director reveals. For her, it isn’t enough to just portion out the fodder prepared on the evening before into the troughs. The skilled butchery merchant, who had worked for a long time in the family butchery, established by the grandfather, finds “the dessert in the mornings” that consists of carrots fed from her hands “very important!” 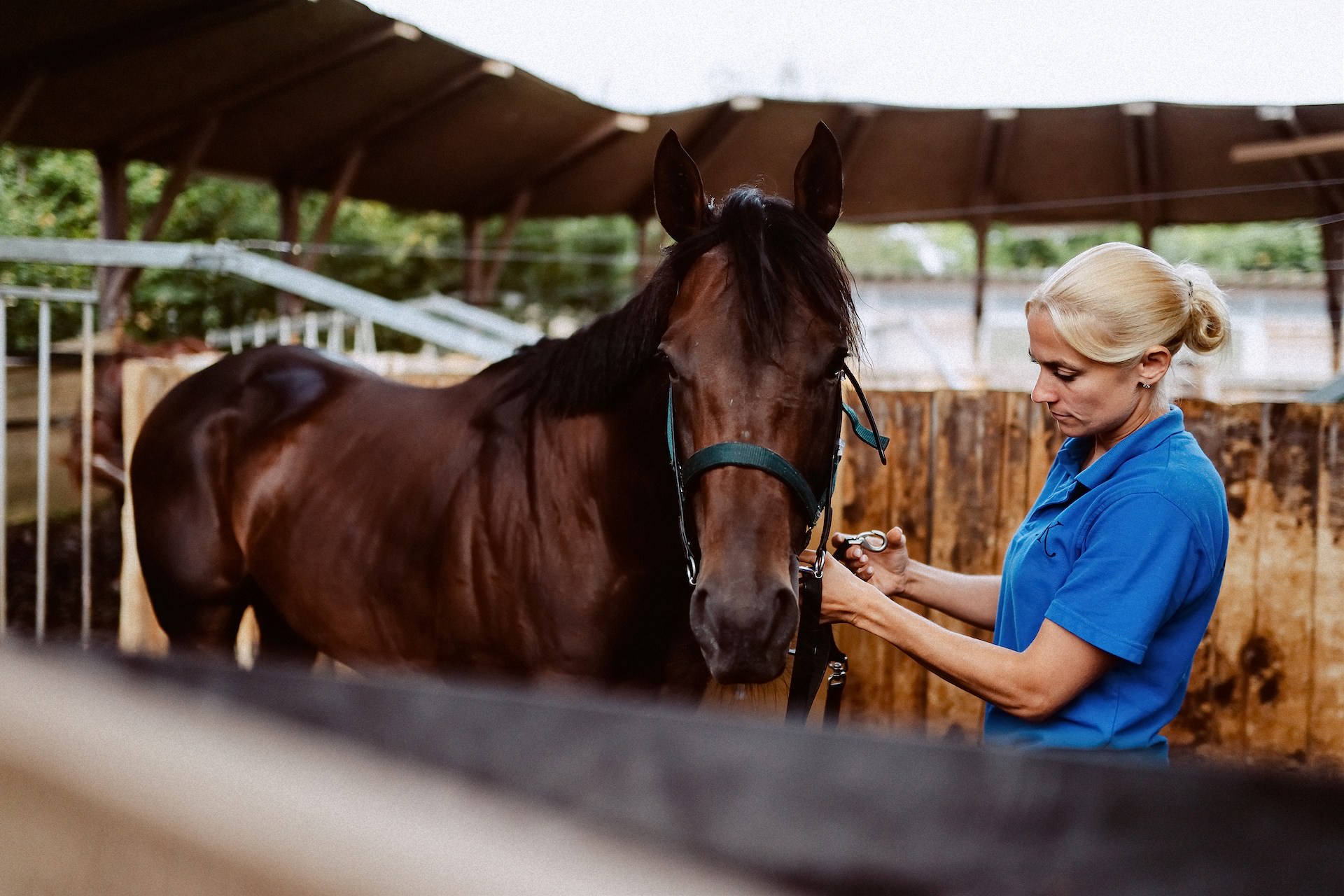 Katrin Klein: Her interest in horses grew only slowly, beginning with a stallion that her brother Marco gave her as a present after she had sat her A-levels.

Around seven, her daughter, Katrin Klein, joins her in the stable. The young real estate merchant mucks out the looseboxes and cleans the horses before she leaves to do her job for a living in an administration company. She had dreamt of a carrier in tennis originally, but a hand injury destroyed this plan. Her interest in horses grew only slowly, beginning with a stallion that her brother Marco gave her as a present after she had sat her A-levels. During the season, she organizes transportation, packs the saddle boxes and looks after the estate’s horses when they are on foreign terrain. Katrin’s heart starts to race when the up-and-coming stable jockey Tommaso Scardino is at the starting line — they are a couple. “It was the best decision in my life to move to Mannheim,” the Italian, who originates from a horse racing family in Pisa, confesses in an interview with the magazine “Galopp Online.” 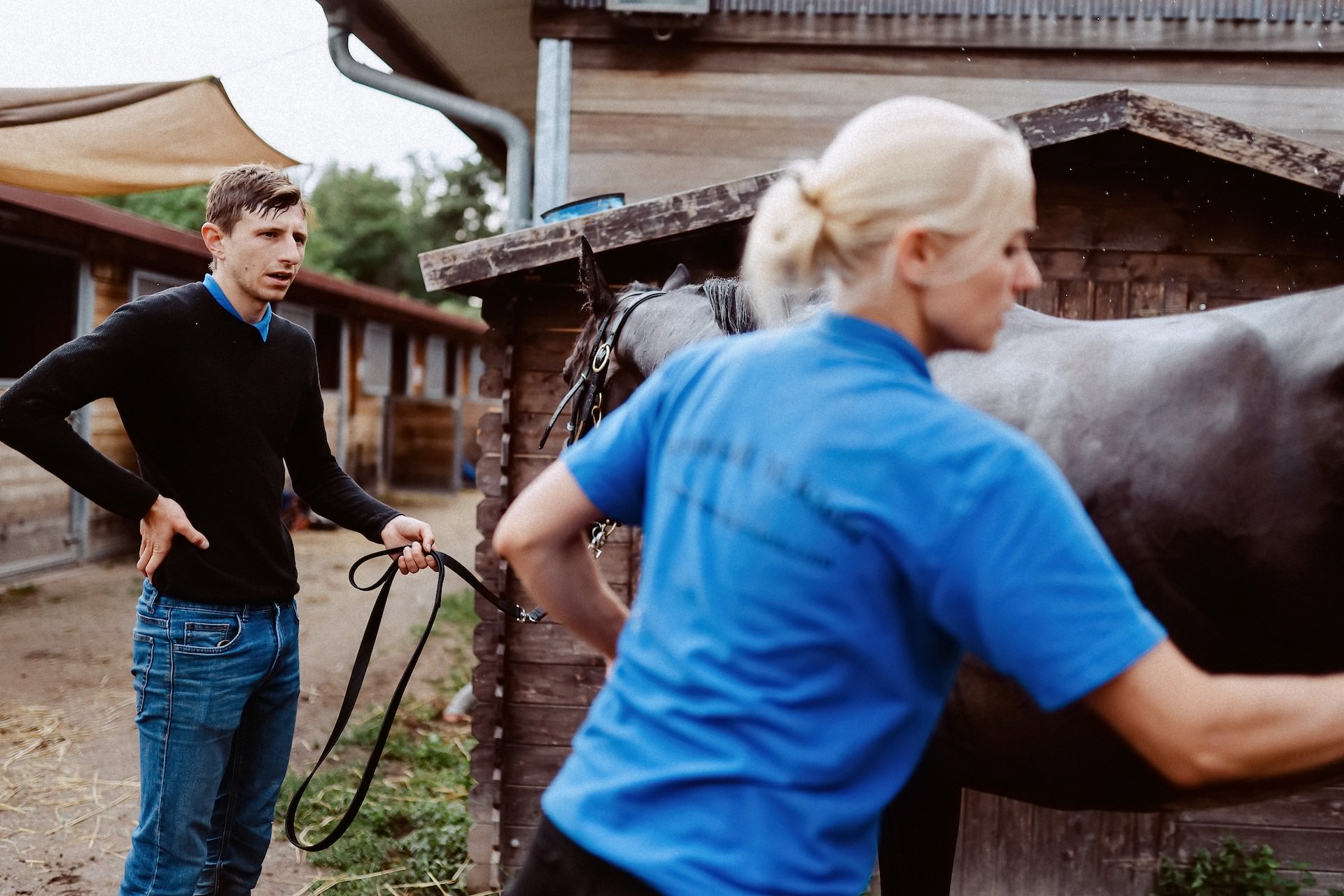 Katrin’s heart starts to race when the up-and-coming stable jockey Tommaso Scardino is at the starting line – they are a couple.

In the morning, Marco determines, which one of the five employed riders rides which horse in which group at what speed. He casts an expert eye over the fitness and gallop techniques of the mounts entrusted to him — and also observes how much they desire to run. His motto is: support and challenge them, but don’t ask too much of them — particularly not of the young talents. “We x‑ray the growth plates in all our two-year-olds to know when physical development has been completed.” 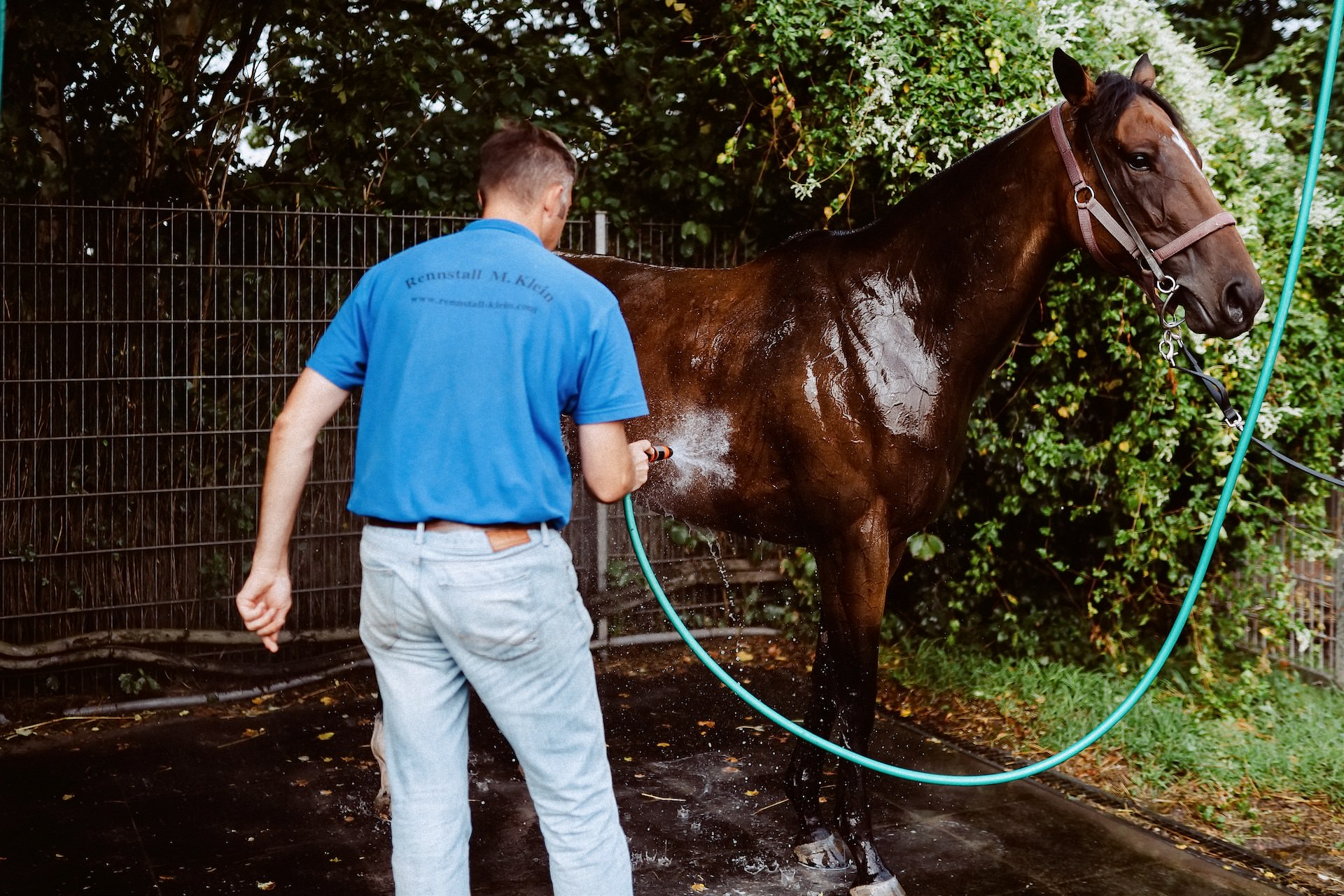 The fine animals stand still on the hosing site without moving, almost like statues, when they get a shower after training to hose the sweat off. Then, Volker Klein takes a pitchfork and flings hay that he has moistened “so it doesn’t make too much dust and is easily digestible.” You wouldn’t believe that the man wearing jeans and a colourful shirt deals with security, traffic and penalty matters during the day. The director of the Viernheim regulatory agency considers the work in the son’s racing stable to be “a nice balance.” He has taken on the role of feeding chief in his leisure time. And he is handed over the reins in the stable when his son is out for races with some of the horses on weekends. After all, Volker has ridden racing horses as a youngster in Viernheim and sat in the saddle on the Seckenheim racetrack in a junior competition. 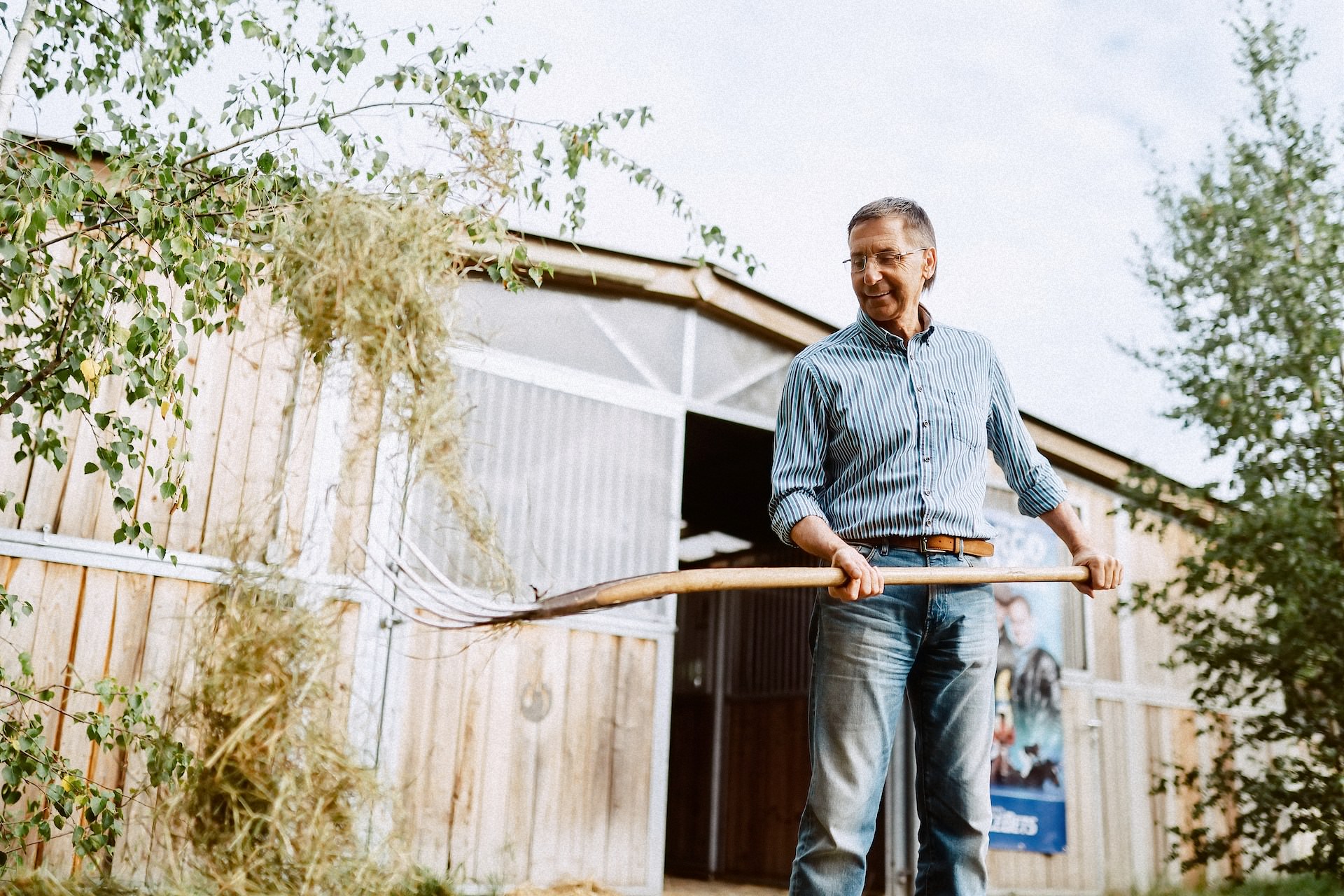 Volker Klein has ridden racing horses as a youngster in Viernheim and sat in the saddle on the Seckenheim racetrack in a junior competition.

“I caught the horse enthusiasm virus when I was a child,” says Marco, continuously emphasizing that his racing stable project would never have had a chance without the support of his family. “My spouse has given me support from the beginning as well,” however, after a serious fall from a horse, he doesn’t join the riding training anymore, “but he covers my back for the project” – running a professional racing stable is a full-time job, 24/7, all the year round. 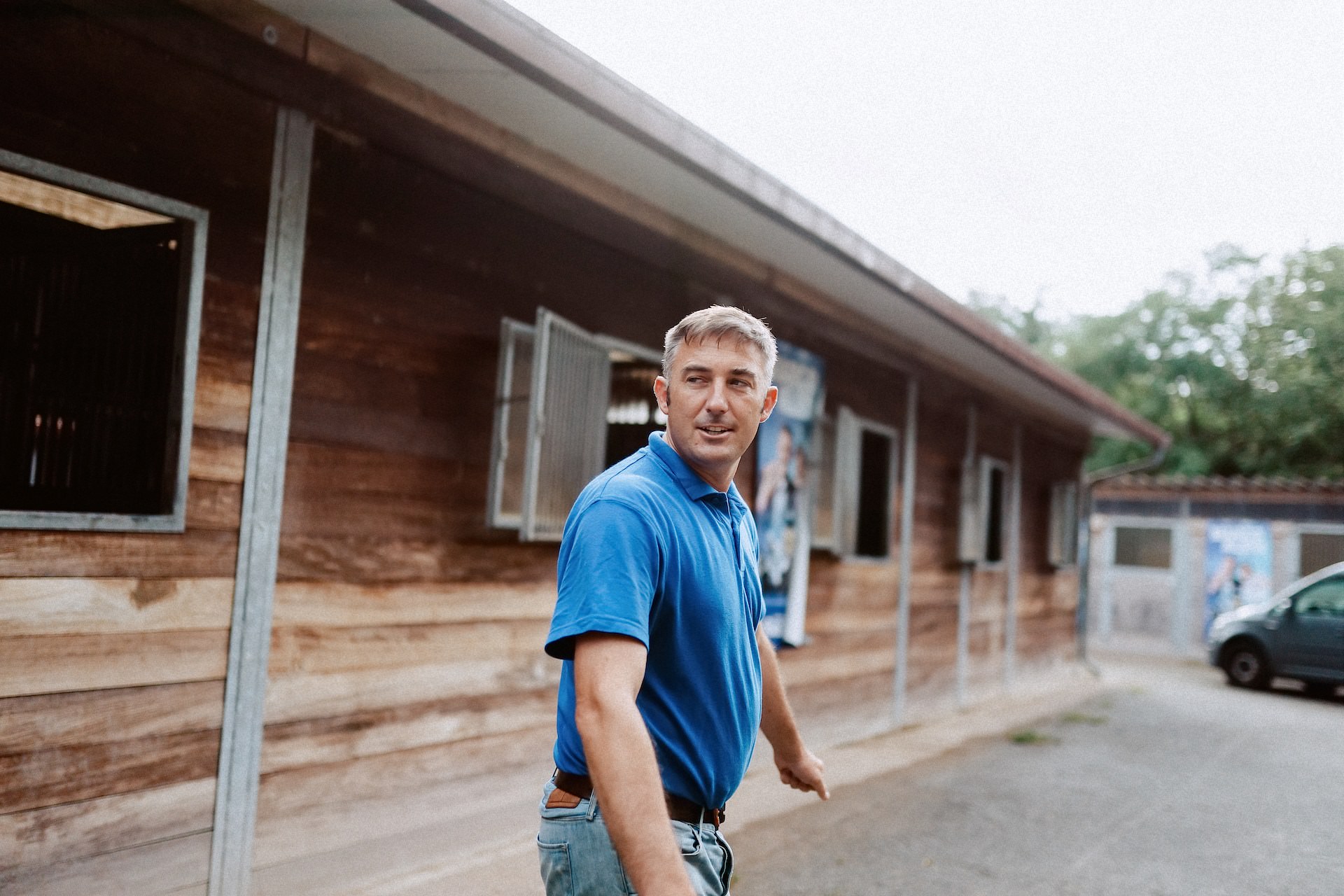 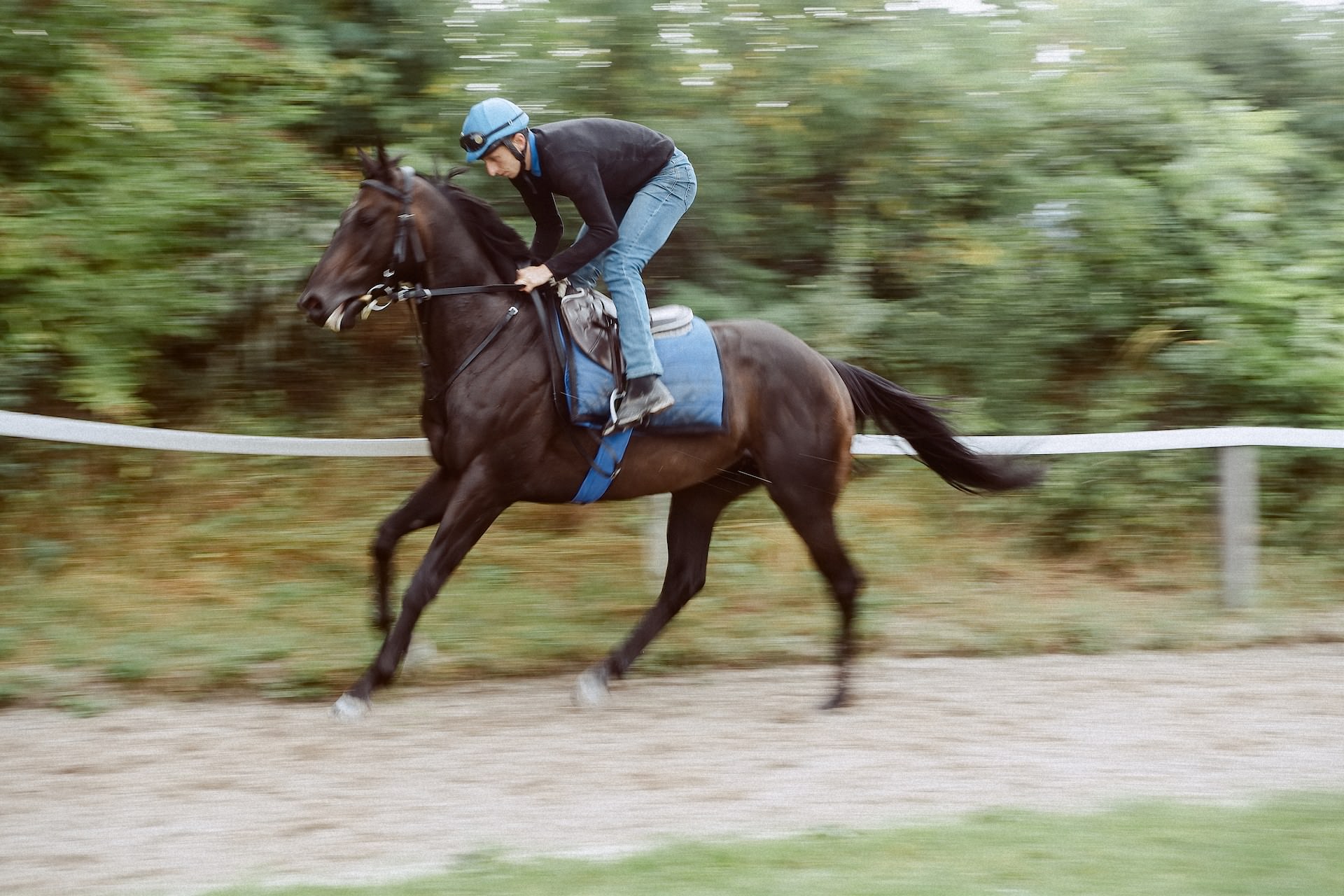 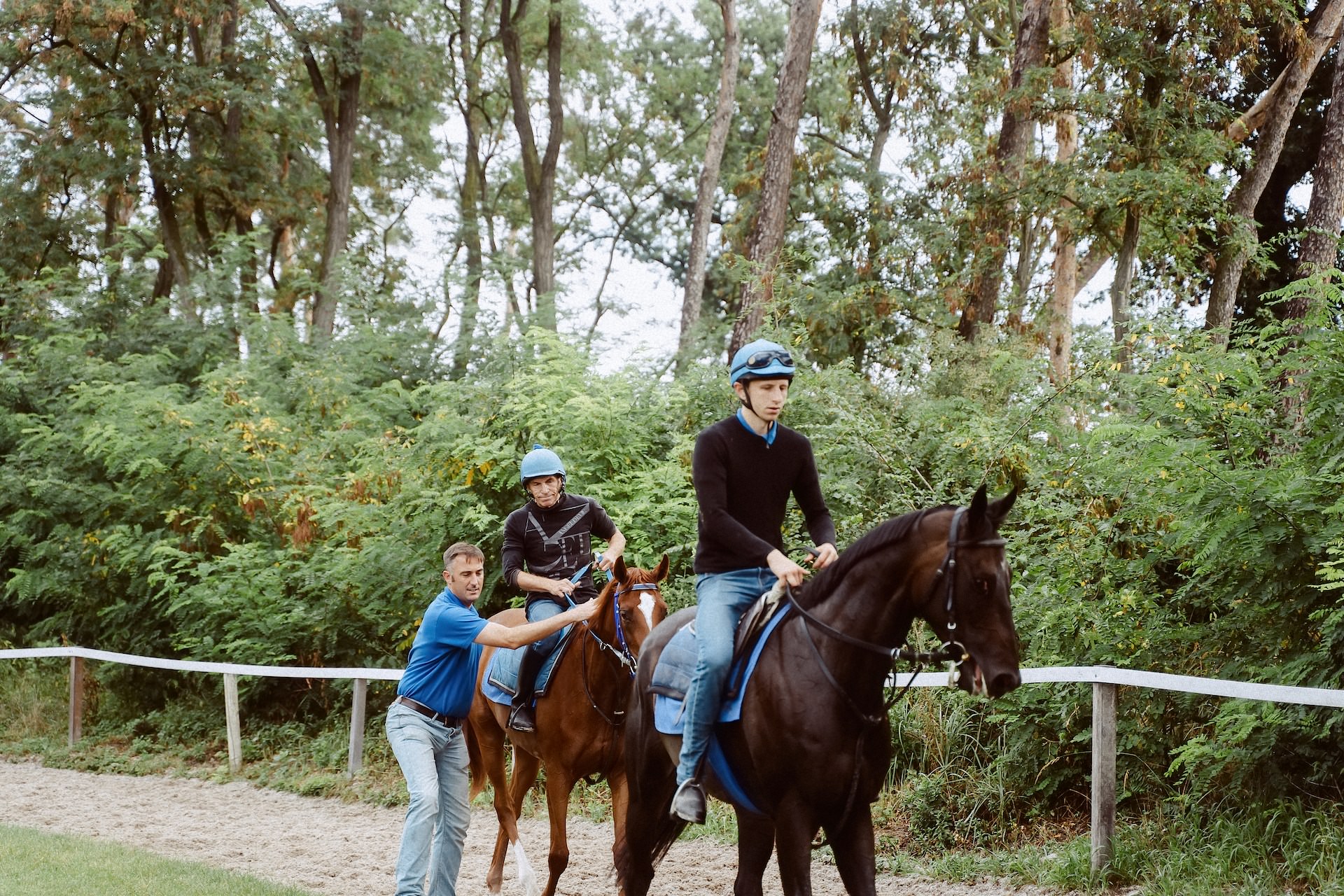 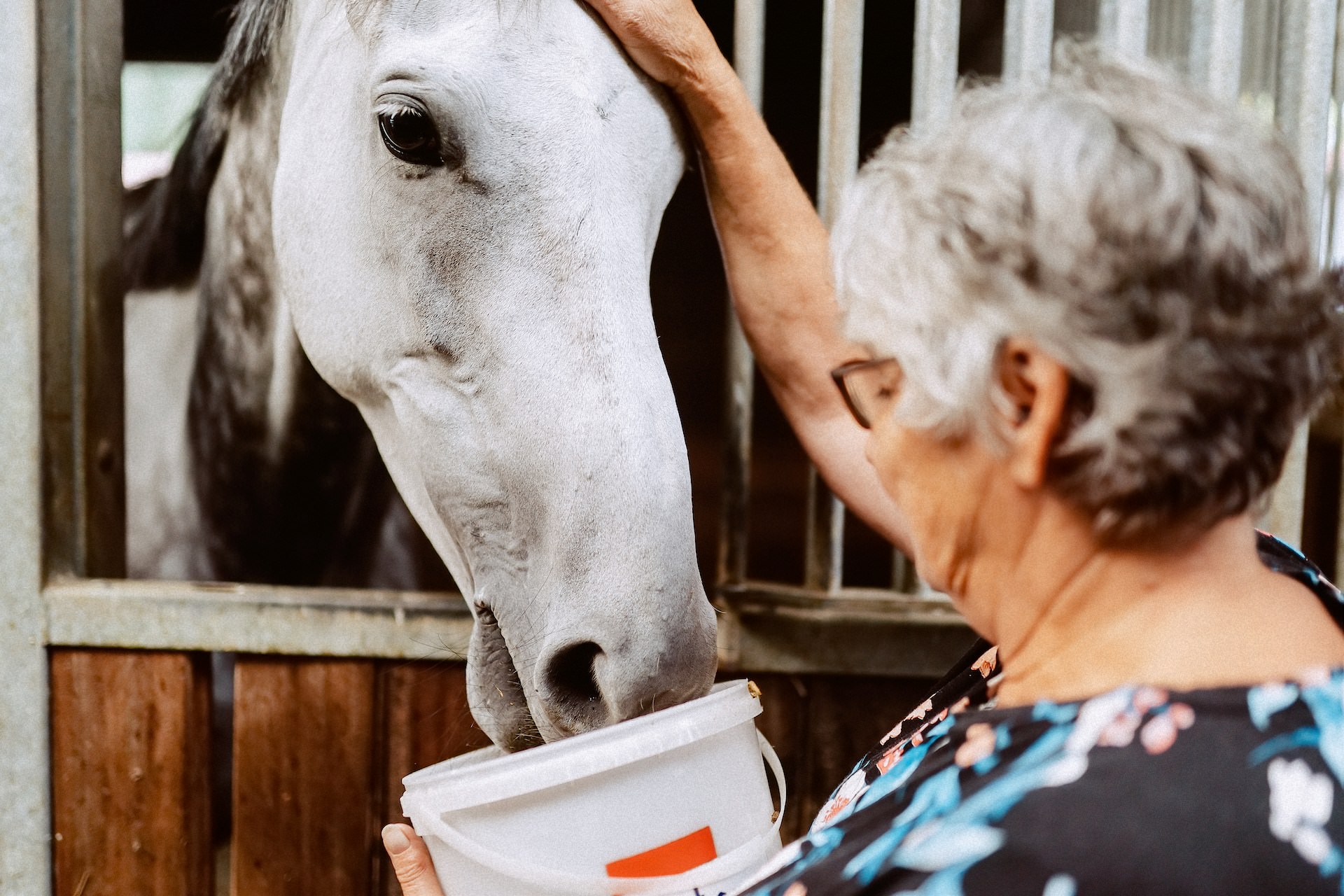 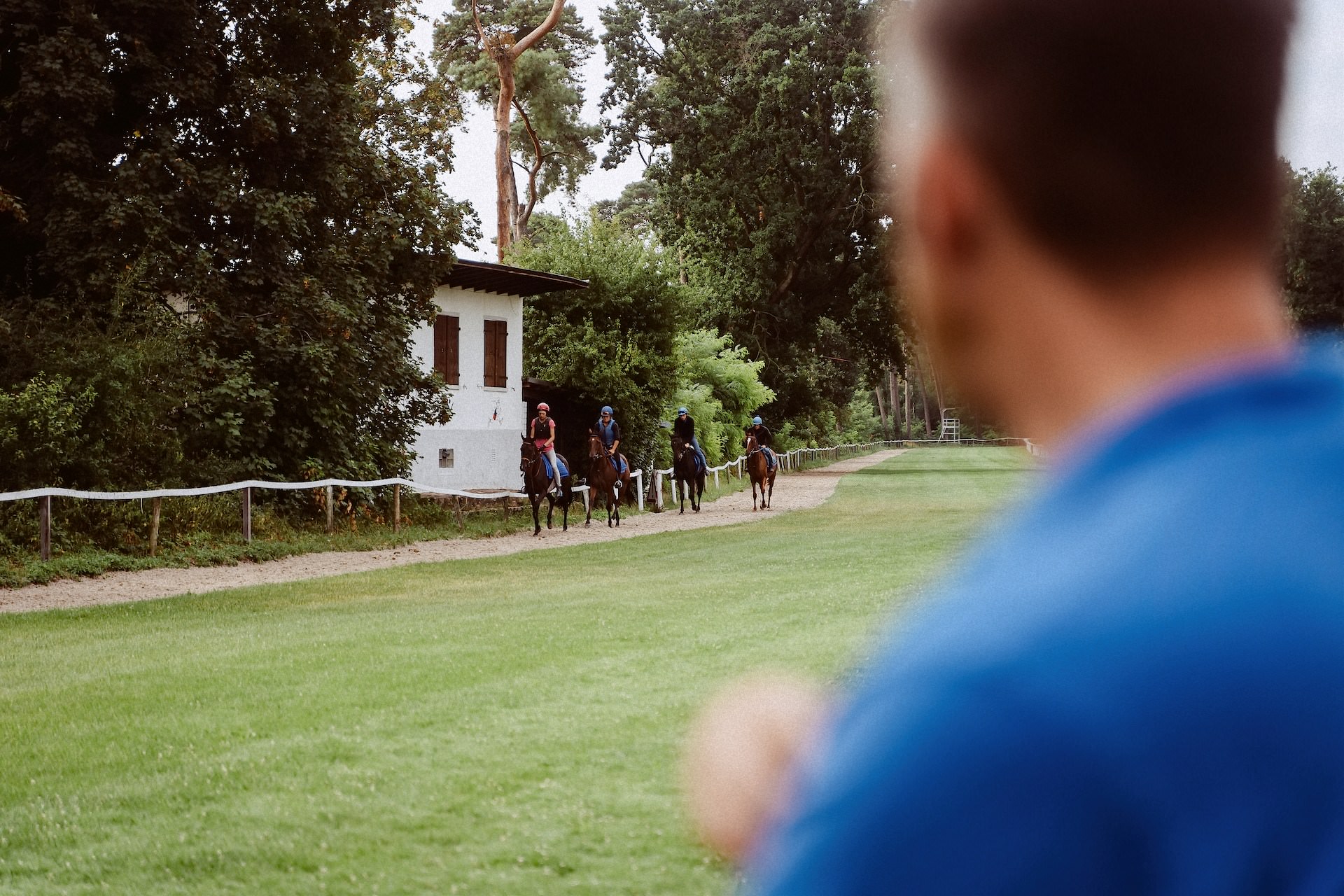 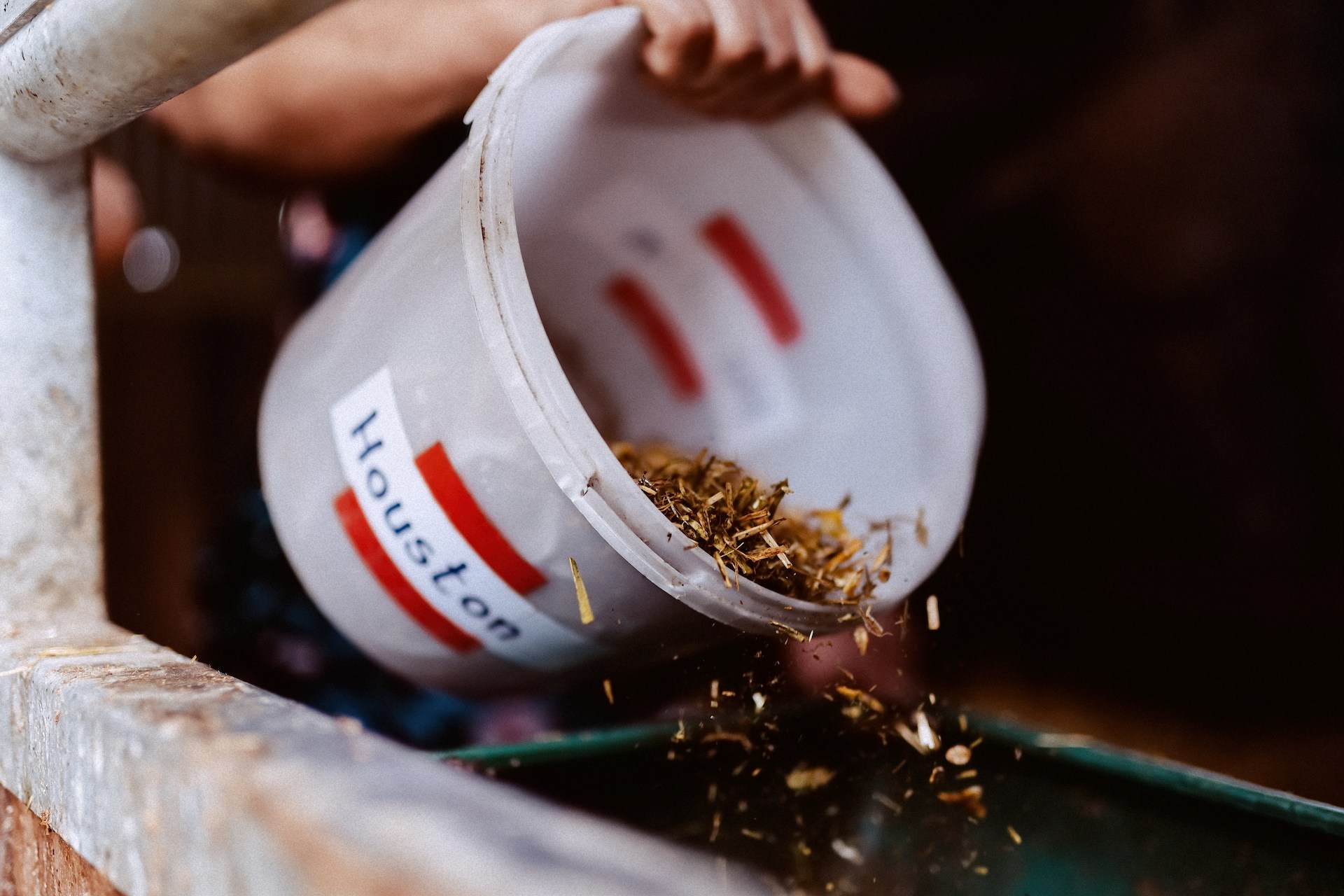 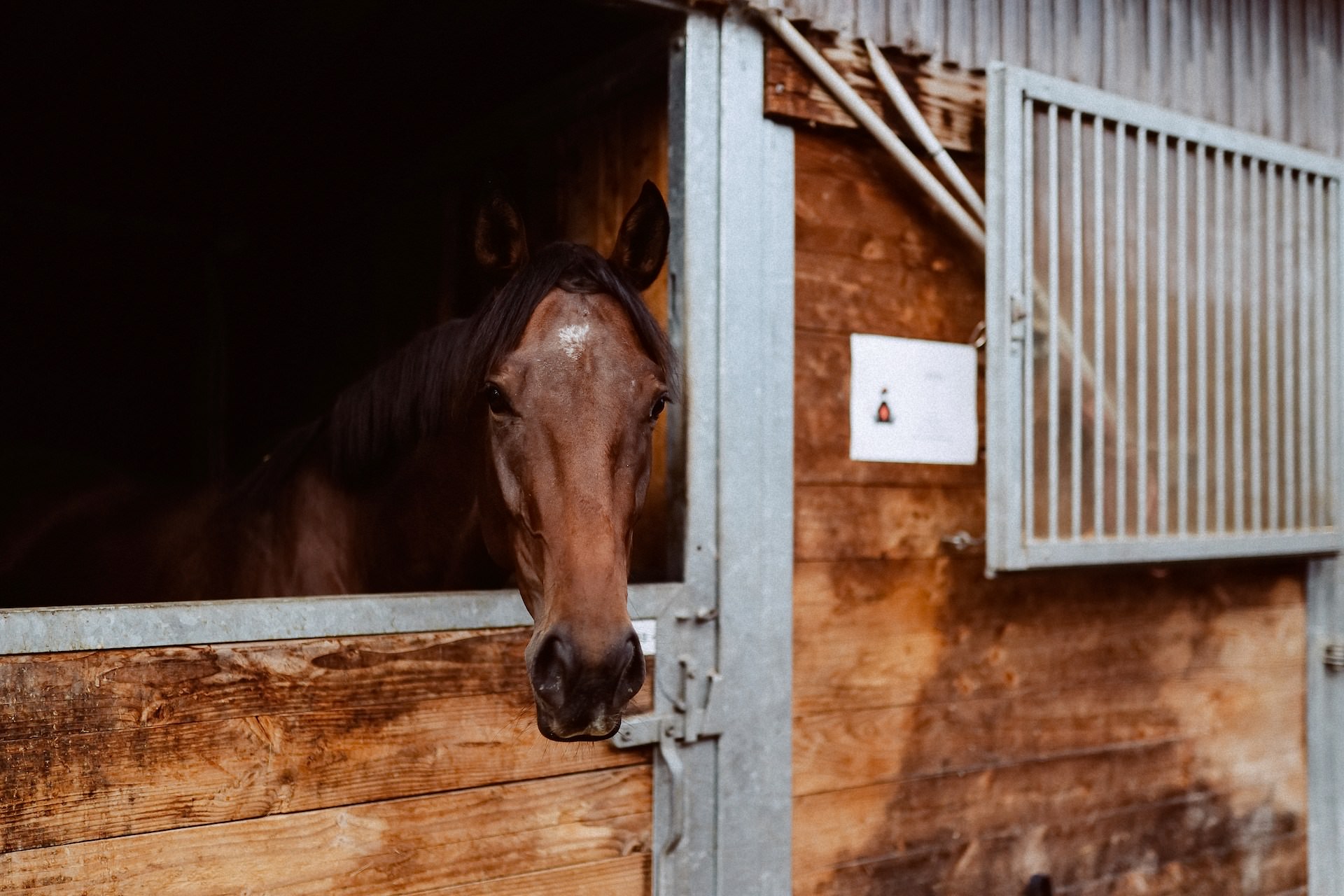