Jürgen Lüber is passionate about sled dogs. For over 30 years, he has been doing training with a team of sled dogs across the Rhine meadows around Lampertheim-Hofheim almost every morning during the winter period. We go on an unusual ride with him across the rimed Maulbeeraue (mulberry meadow).

The destination is called ‘Außerhalb’, which translates as ‘far off’. Towards ‘Wetzelhecke’. Surrounded by fields, Jürgen Lüber’s house is located exactly like the address implies. You get there via a field path that turns into a gravel track with sludge and puddles. Behind the house there is the train route from Worms to Bensheim. The morning sun fights its way through the fog and makes the rime drop from the leaves while roe deer grazes on the Rhine meadows a few hundred metres from here. A blackbird and tits chirrup. It is an idyllic scene—as long as there is no dog sled training. 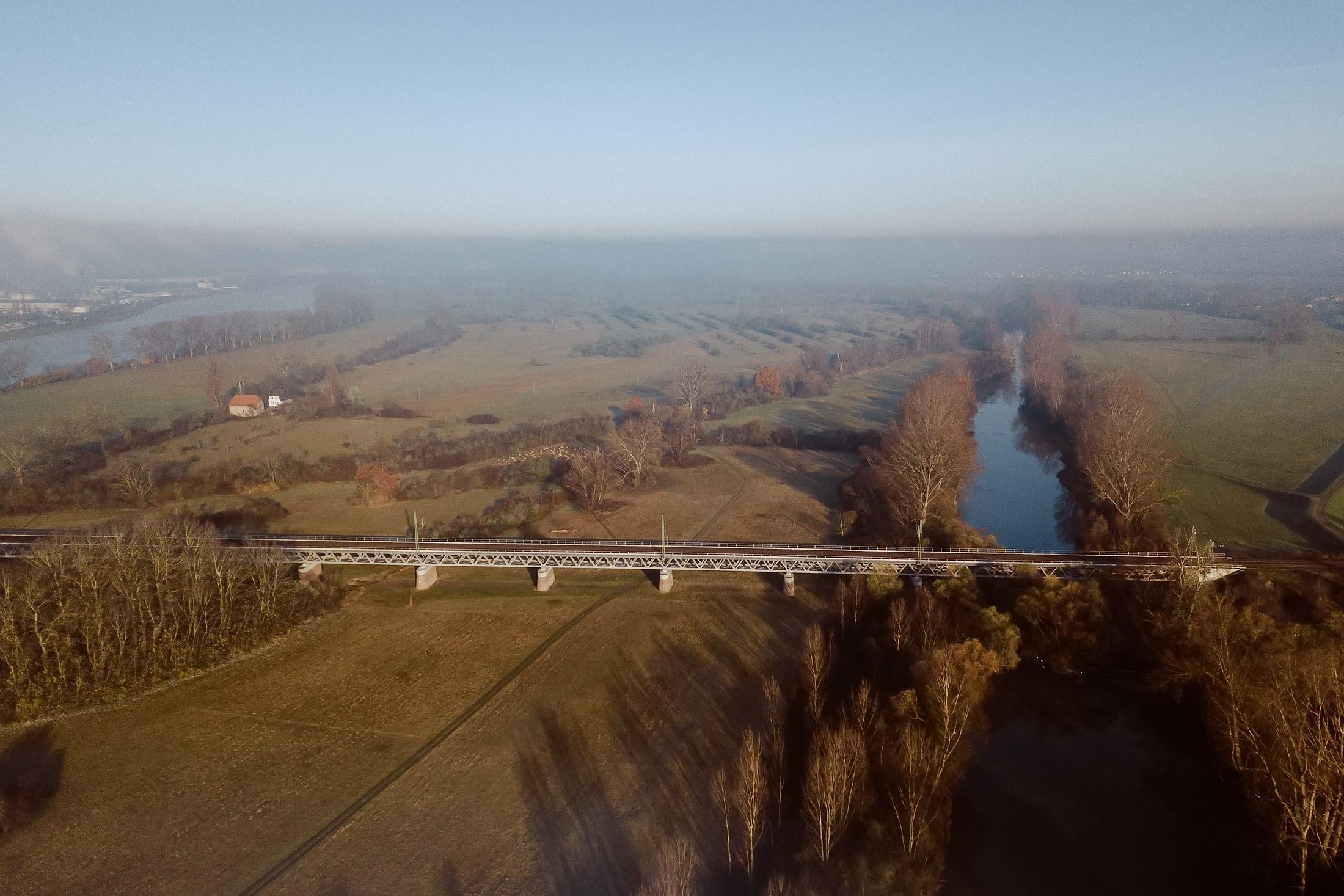 The dogs bark noisily and are all excited. Jürgen places wooden nameplates in two rows on a board and calls their names one after the other: “Circe!” A bitch breaks free from the crush and comes flying towards Jürgen. He greets her with a cuddle and puts a harness on her. He continues: “Yeli, Ucko!” And then Wumm fidgets in front of him and barks impatiently for his turn. “Wilma!” No reaction. “Wilma, don’t you go catching rats now!” Finally, the ten dogs are ready to start, including Wumm. Jürgen’s friend Manfred Wetzel opens the gate: the dogs fall silent abruptly and start running. 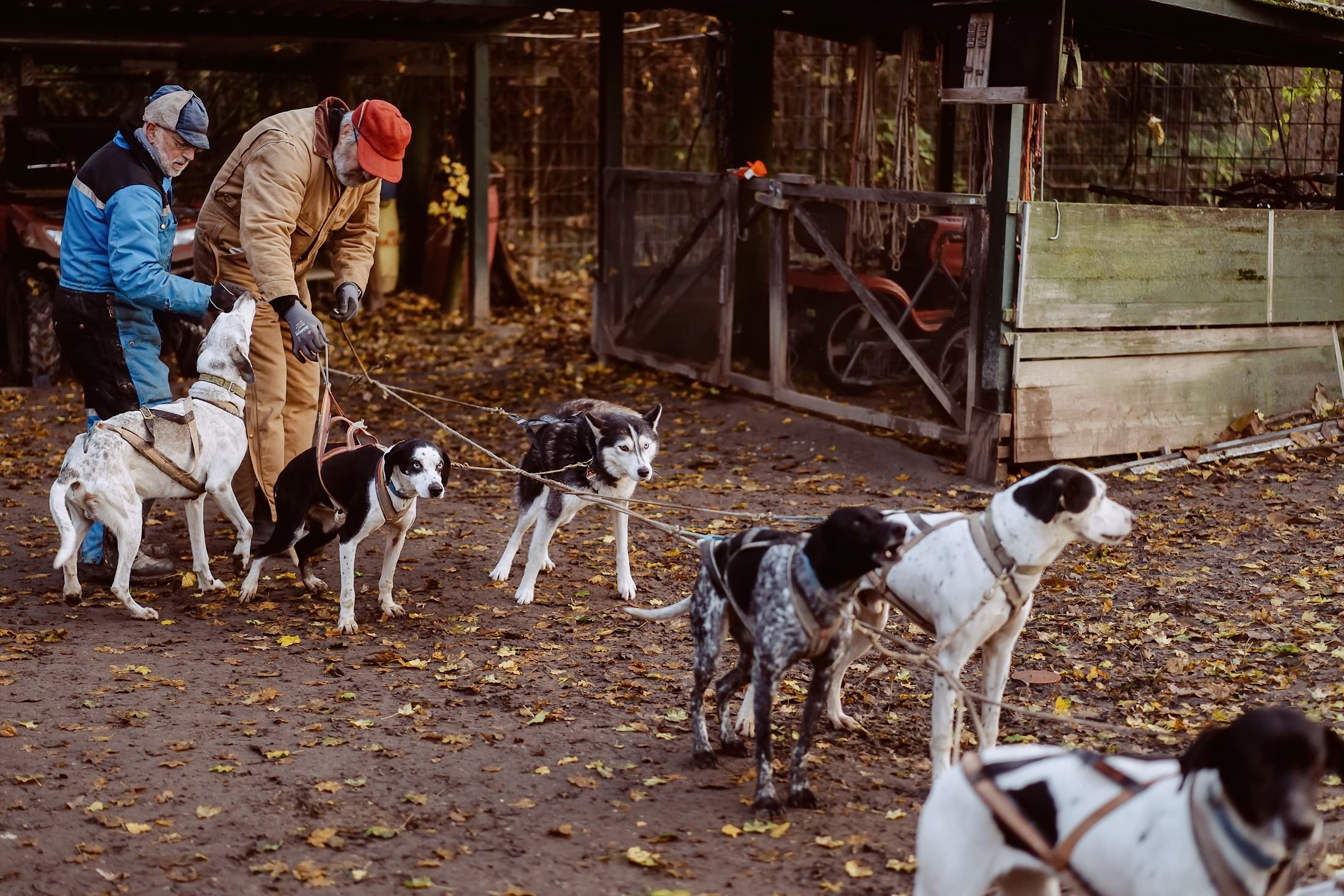 Nine Scandinavian Hounds, also known as European sled dogs, and a Siberian Husky, Manfred’s dog, pull away. The Scandinavian Hounds are slender and have longer legs and shorter hair than the Husky. “And they are better in terms of speed, endurance and cleverness,” Jürgen explains. Today, the dogs pull a quad vehicle in neutral. The ground is too muddy and the puddles are too big for the low training carriage. The last time Jürgen’s dogs pulled a sled across the Rhine meadows was in 2009. “Do you remember that?” he asks his friend later at the fireplace while they are having breakfast. Manfred nods with a smile on his face. Those days! “In those days we used to play ice hockey on the then flooded and frozen Rhine meadows.” Jürgen stands up to get some photo evidence. 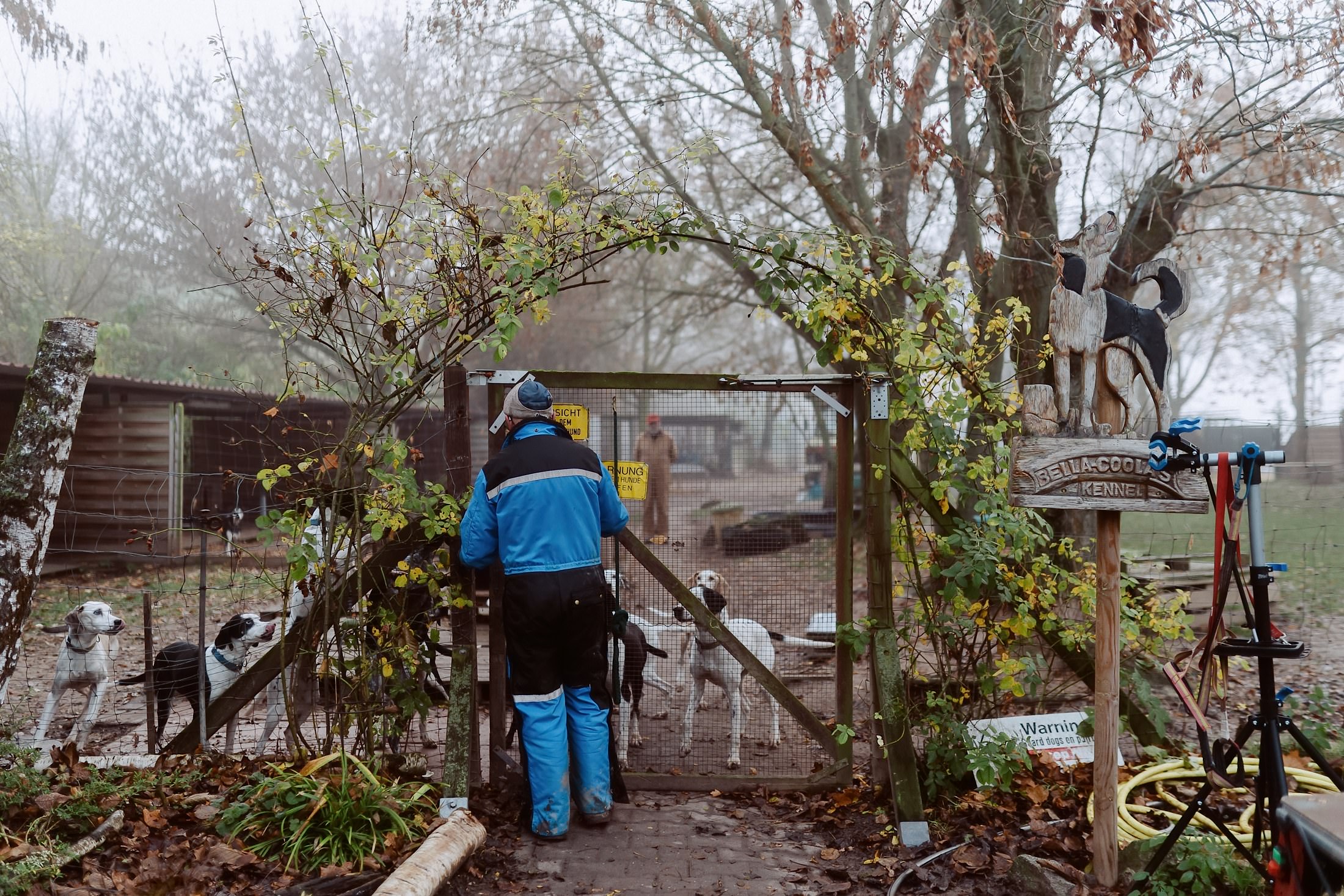 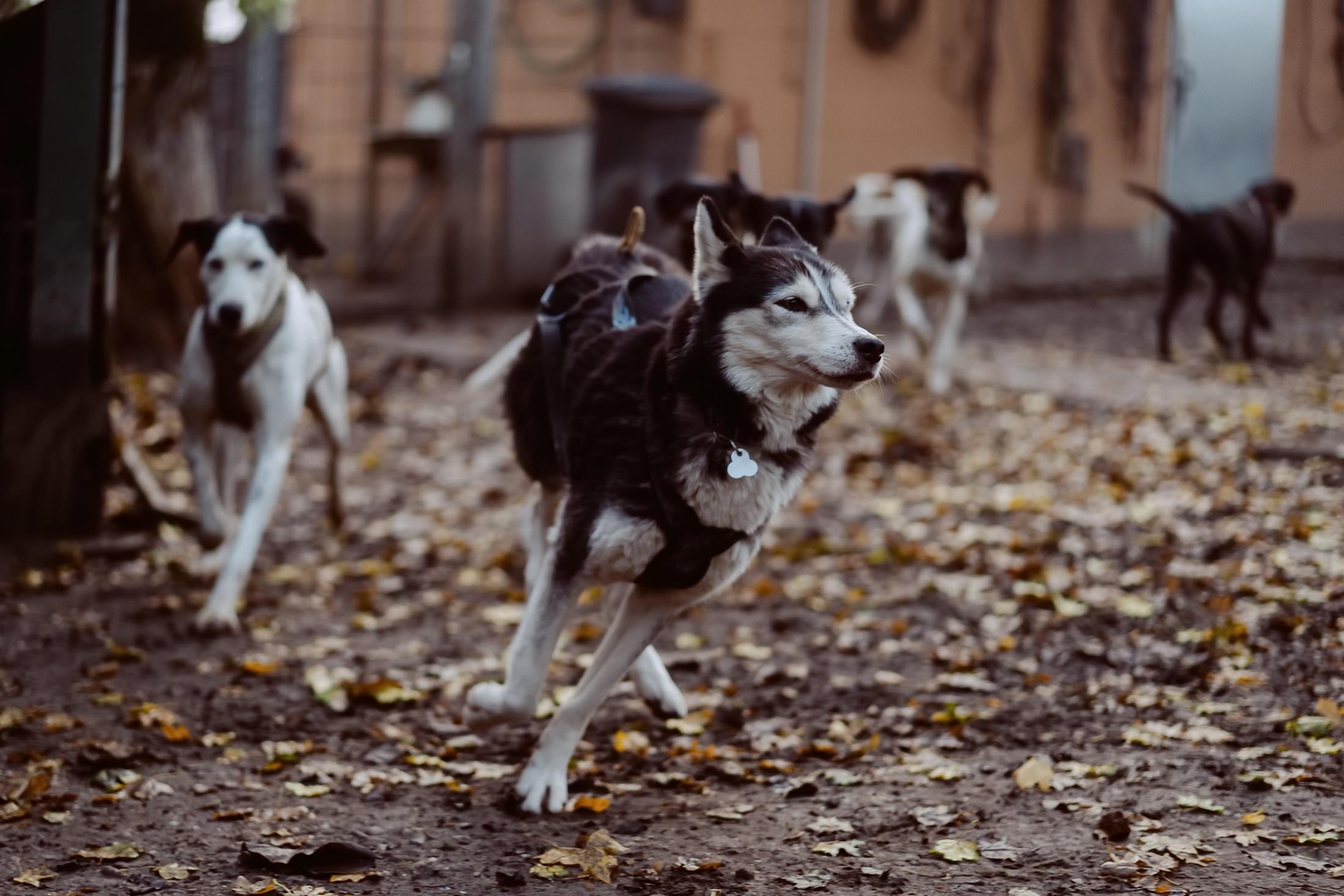 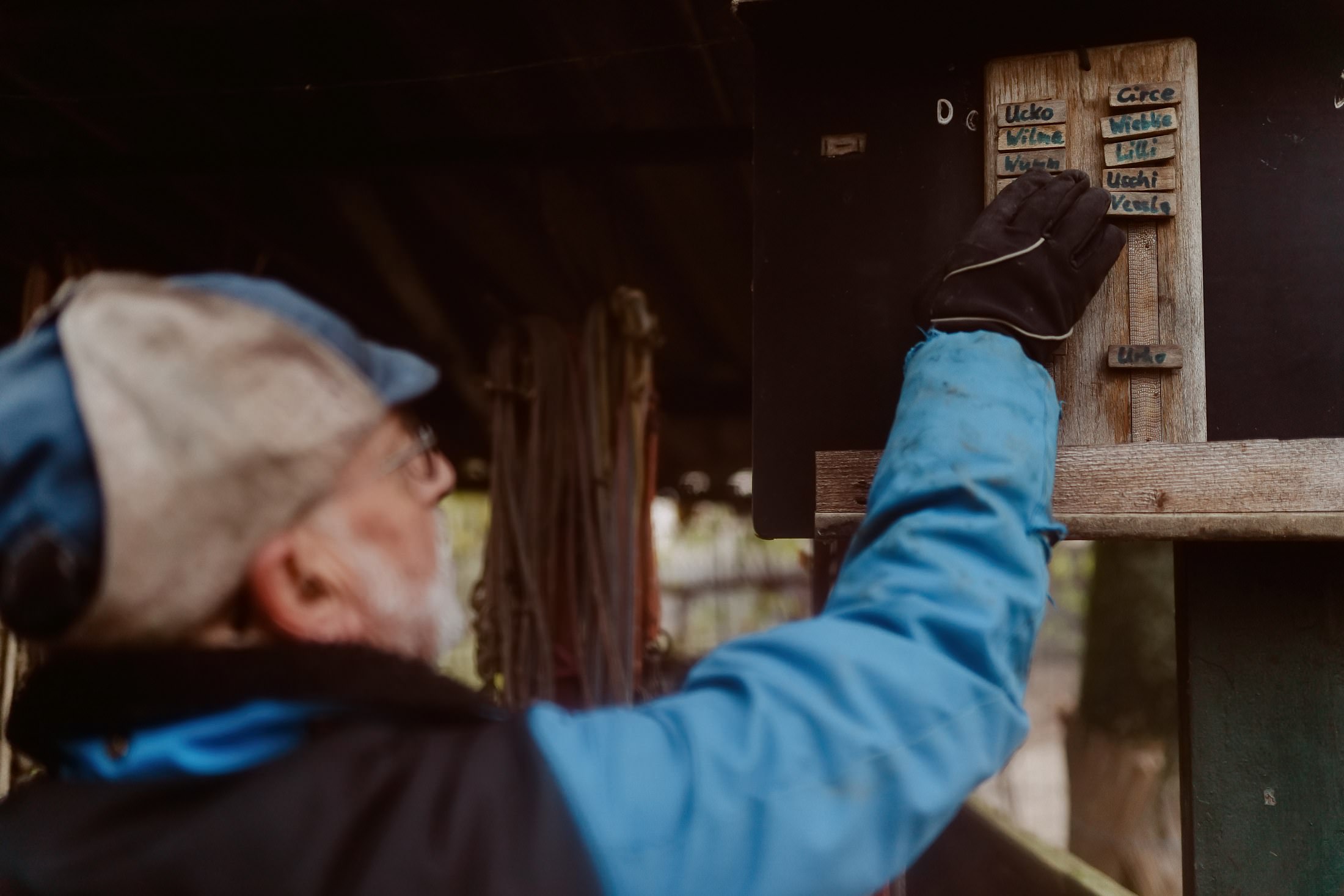 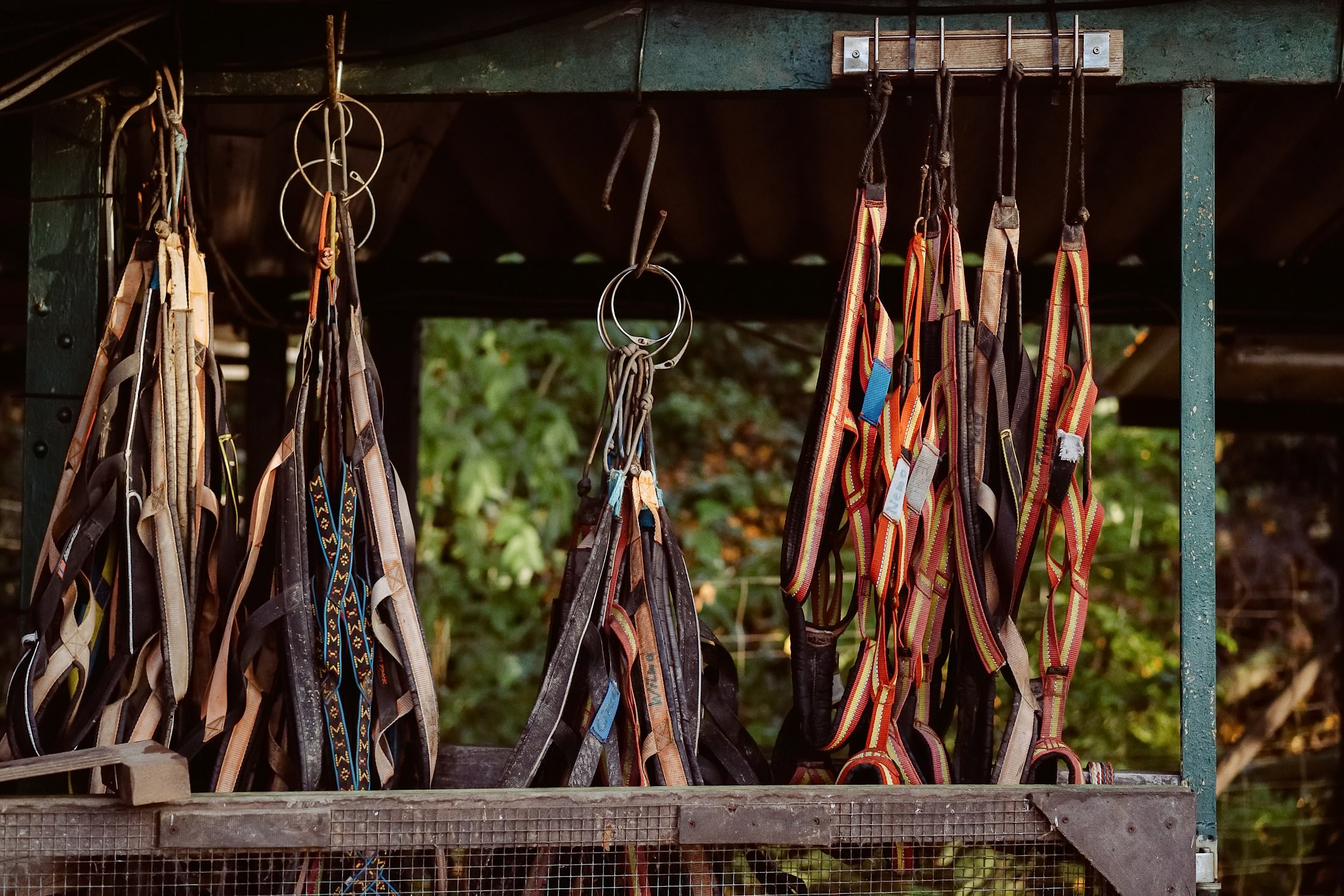 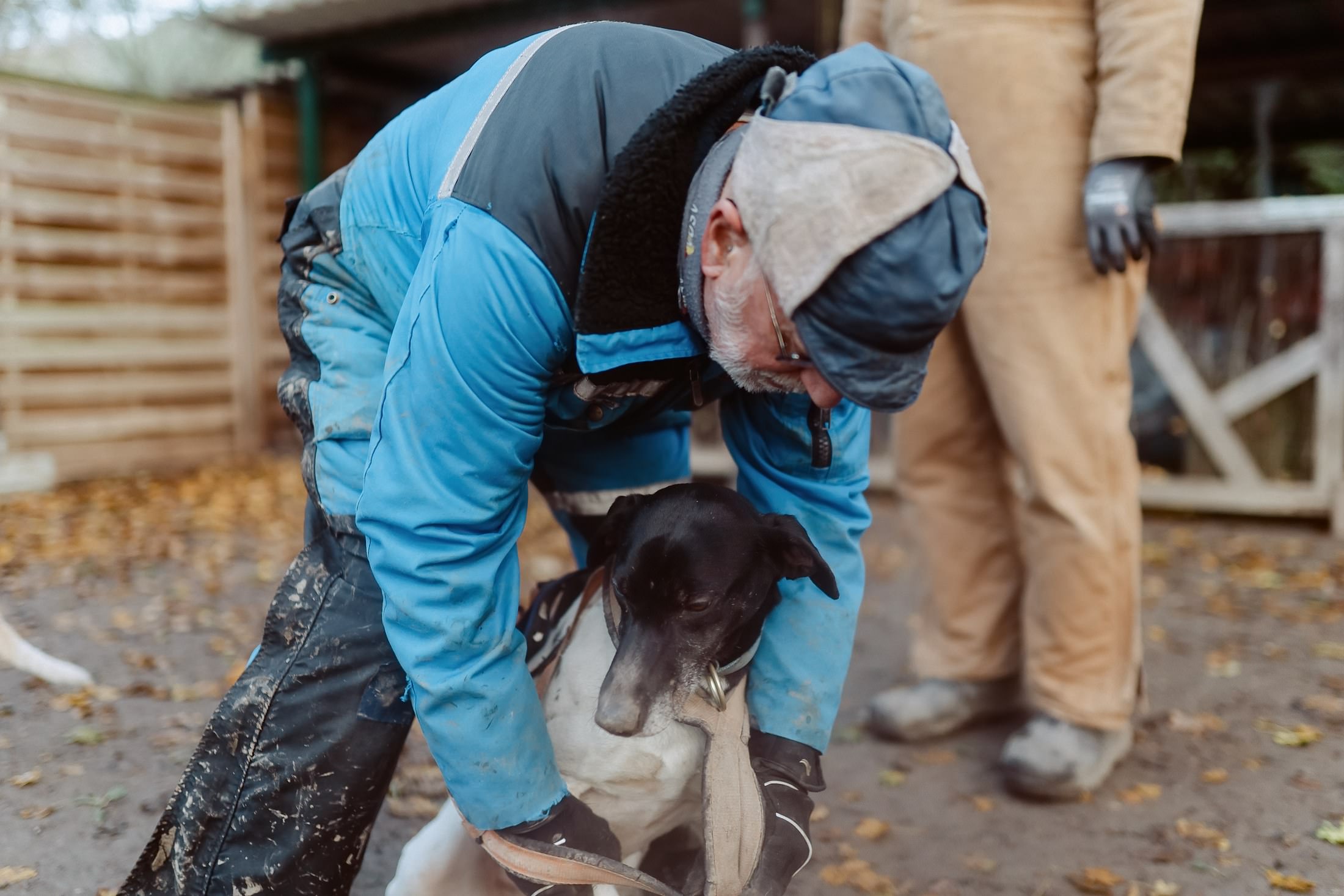 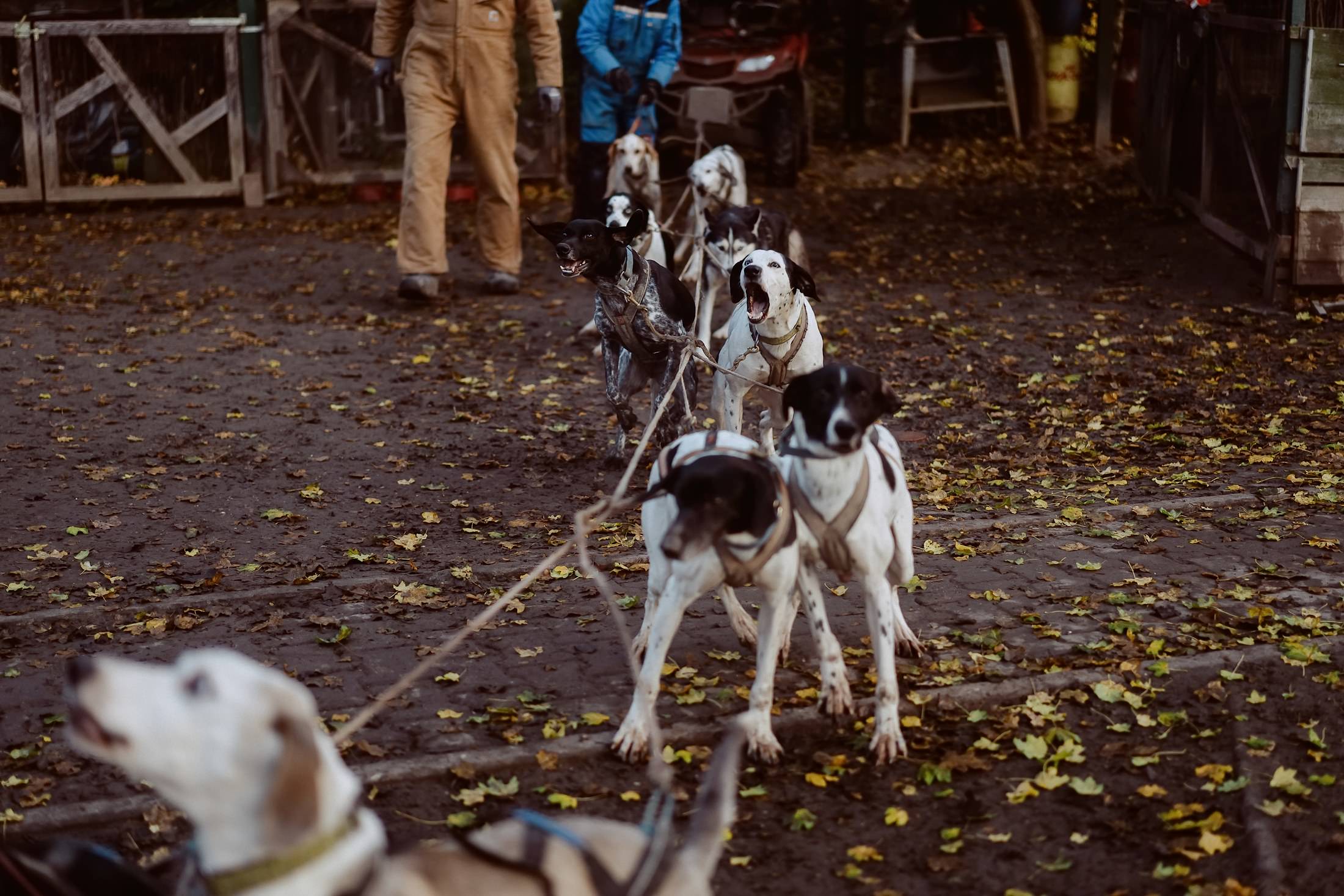 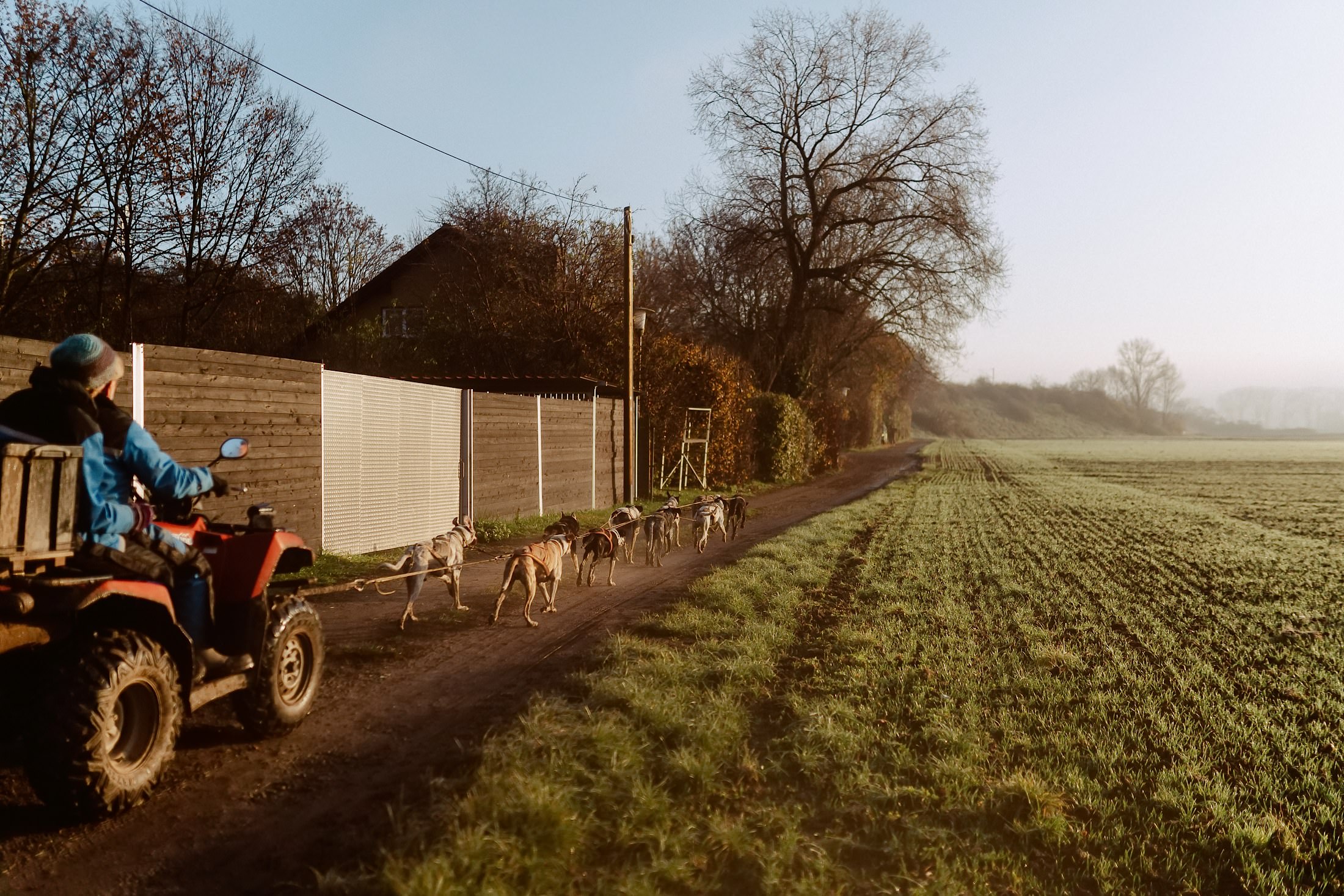 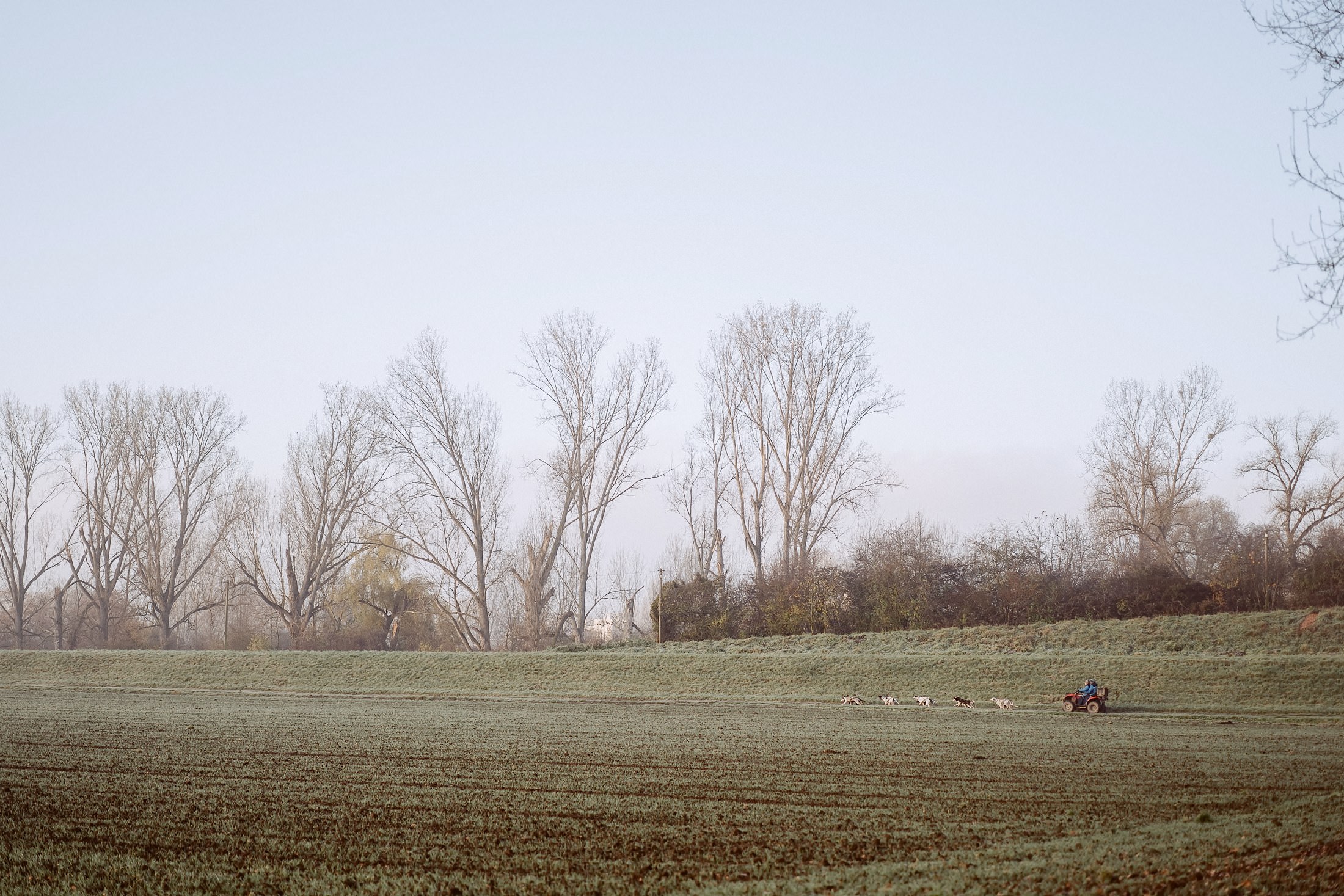 Nowadays, the pensioner is already content when the winter temperature drops below zero. He does training early in the mornings, just after sunrise. Today, he does a 5.5-kilometre ride across the Rhine meadows. It is a short ride—the quad is a heavy weight to pull for the dogs. Nevertheless, they make some 20 kilometres per hour. They run up and along the dyke. “Försiktig,” Jürgen calls out, which means: “Attention! I’ll give you an order to change the direction in a second.” Then he calls out short orders: “Haw” for left, “Gee” for right, “Go Ahead” for straight on. The dogs obey without hesitation, no matter whether there is a track, a path or just fields ahead of them. Even if sheep are grazing on the left, some roe deer is hopping across their way or an unleashed dog approaches them yapping wildly. They keep on doing what they like most: they run. 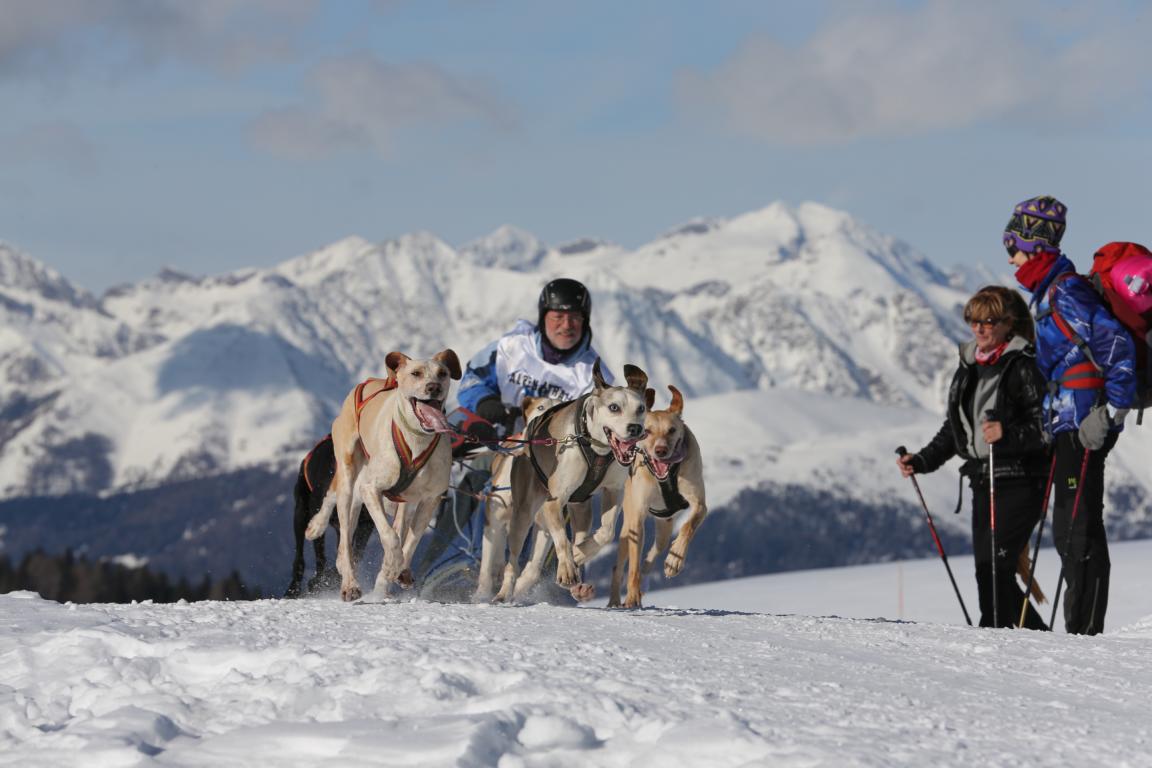 Jürgen Lüber with his dogs 2014 in the Alps of South-Tirol.

They pull the quad over a cobblestone bridge towards the Maulbeeraue—an island in the Rhine that extends from the Lampertheim part of town Rosengarten to the Biblis part of town Nordheim. It belongs to the ‘Bergstraße-Odenwald UNESCO Global Geopark’ and is under conservation. Almost the entire eponymous mulberry forest was cleared at the end of the 18th century. What came out of it is an idyllic meadow landscape, providing a habitat for roe deer, foxes and pheasants. The grass is still rimed and the Rhine emits foggy steam. The industrial area on the Worms side of the river is wrapped in thick clouds. Herons wade through the quiet branches of the original course of the Rhine. 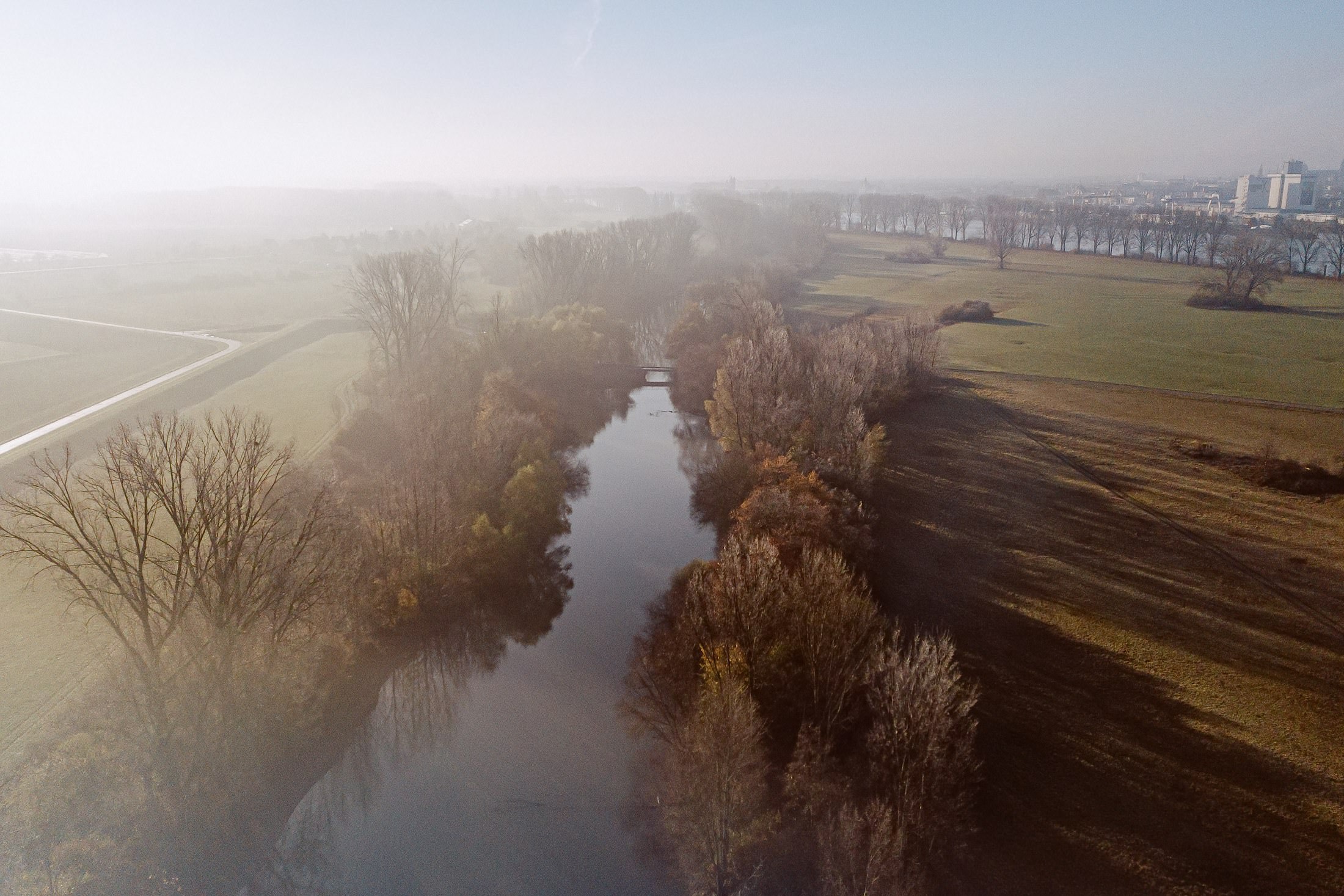 Jürgen and his partner Renate came here with their dogs by pure chance. Initially he wanted to move to the industrial area of Hofheim, where he used to work as a family doctor. But he got the opportunity to build a house here in the nowhere. “A stroke of luck,” he says and he is happy each time he flies across the Maulbeeraue with the sled dogs. Some 17 dogs live with the couple on the large property with numerous trees. The youngest dogs are 7, the oldest 14 years old, which is an impressive age for a dog. Taisto is blind and doesn’t hear very well anymore. Olle has ankle joint arthrosis. These dogs are not used for training anymore. “We take them for a walk, just like any dog.” They will stay with the couple until they die, just as they were born there.

“Being out and about with the dogs as long as possible”

Jürgen says that without any bitterness. The walls of his house are ‘wallpapered’ with memories, the glass cabinet in the living room bursts with cups. He has experienced a lot with his dogs: He went down black ski runs at 40 kilometres per hour, did a race with a length of 60 kilometres without a break on the Alpen-Trail, became German Champion several times and finished third in the European Championships in Hungary in 2010. He did tours at temperatures of minus 30 degrees Celsius in Alaska, did the Olympic Biathlon trail at Lake Placid and got frostbitten in his fingers in Switzerland. For many years, he was president of the society for German sled dog sports associations ‘Verband Deutscher Schlittenhundesport Vereine’ and still manages the Rhineland-Palatinate division ‘Rheinland-Pfälzischer Schlittenhundesportverein’ with Manfred. He doesn’t want to achieve anything else, except: “Being out and about with the dogs as long as possible—as long as the old bones allow him to do so.” He is talking about both the dog’s and his own bones. Jürgen laughs. Not a minute goes by, in which he doesn’t. 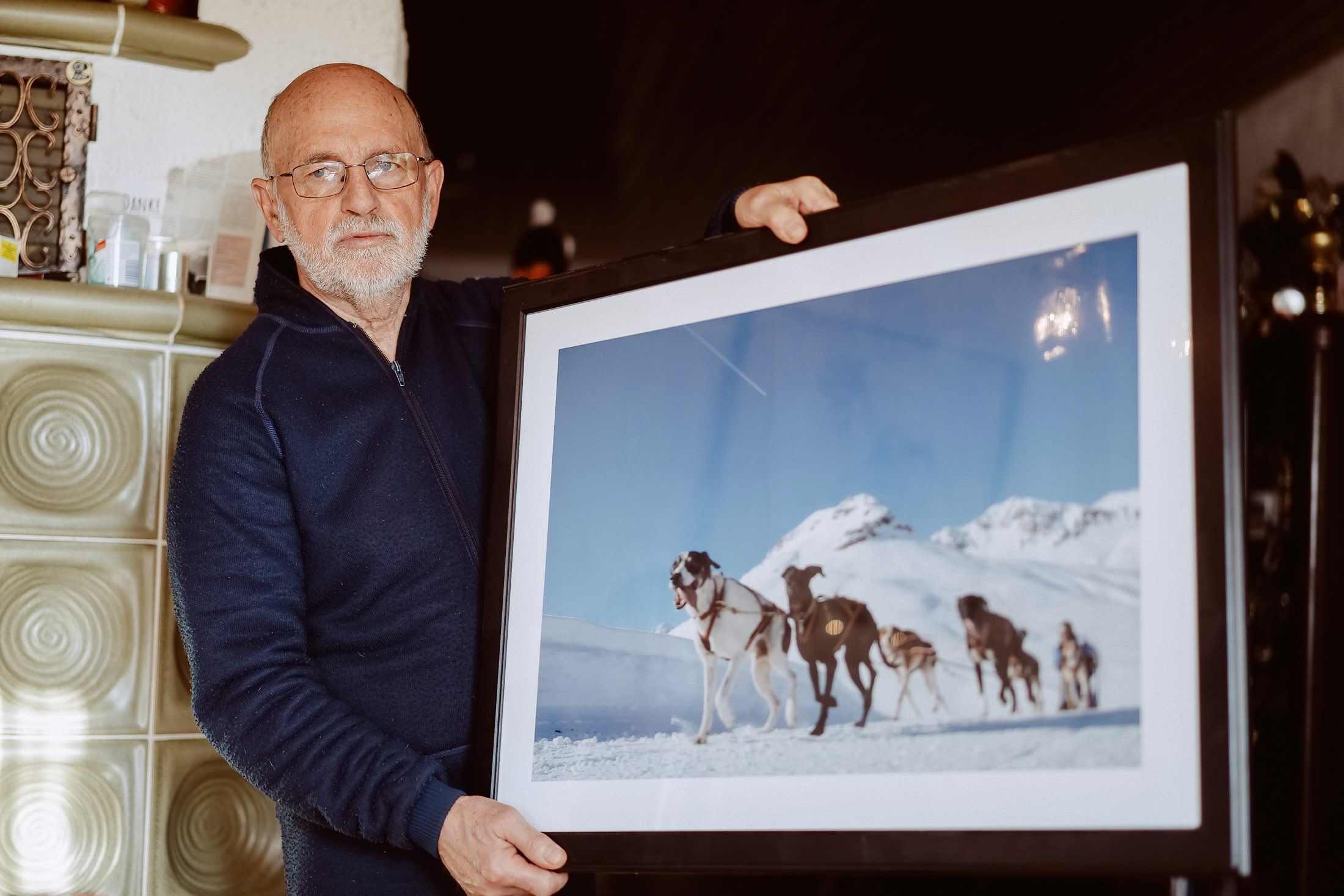 It all began in 1971. Renate’s brother brought a bitch from the animal shelter. The couple immediately feel in love with Rexi, a Siberian Husky. “She fascinated us. These dogs are extraordinary.” Four years later, Rexi’s first litter was born. “We knew: If we wanted to keep them in ways appropriate to their species, they needed exercise. Lots and lots of exercise.” They bought a training vehicle and from the first ride on Jürgen was gripped by a passion for this sport. In 1977, he took part in his first race. More than 500 races were to follow. In winter, when temperatures drop below 10 degrees, he trains almost every morning. When he was still working as a doctor, he used to do this even before work—with a headlamp. 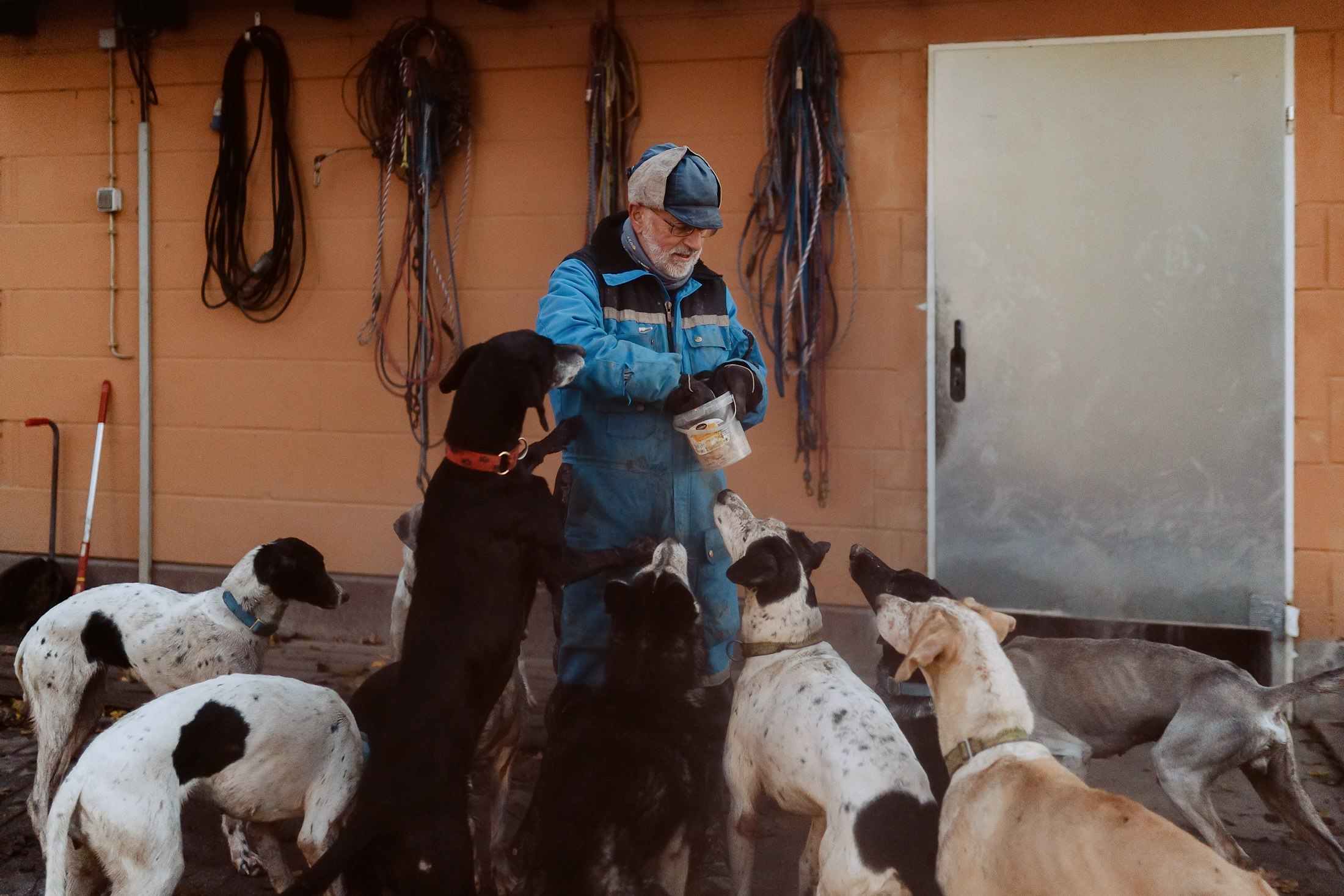 After training, some of the dogs take a bath in the paddling pool. Then they have a ‘soup’ that consists of pelleted food soaked in water. For a few minutes there is nothing else to hear than tongues lapping up the delicacy. Silence returns to Wetzelhecke. Until the next training unit. 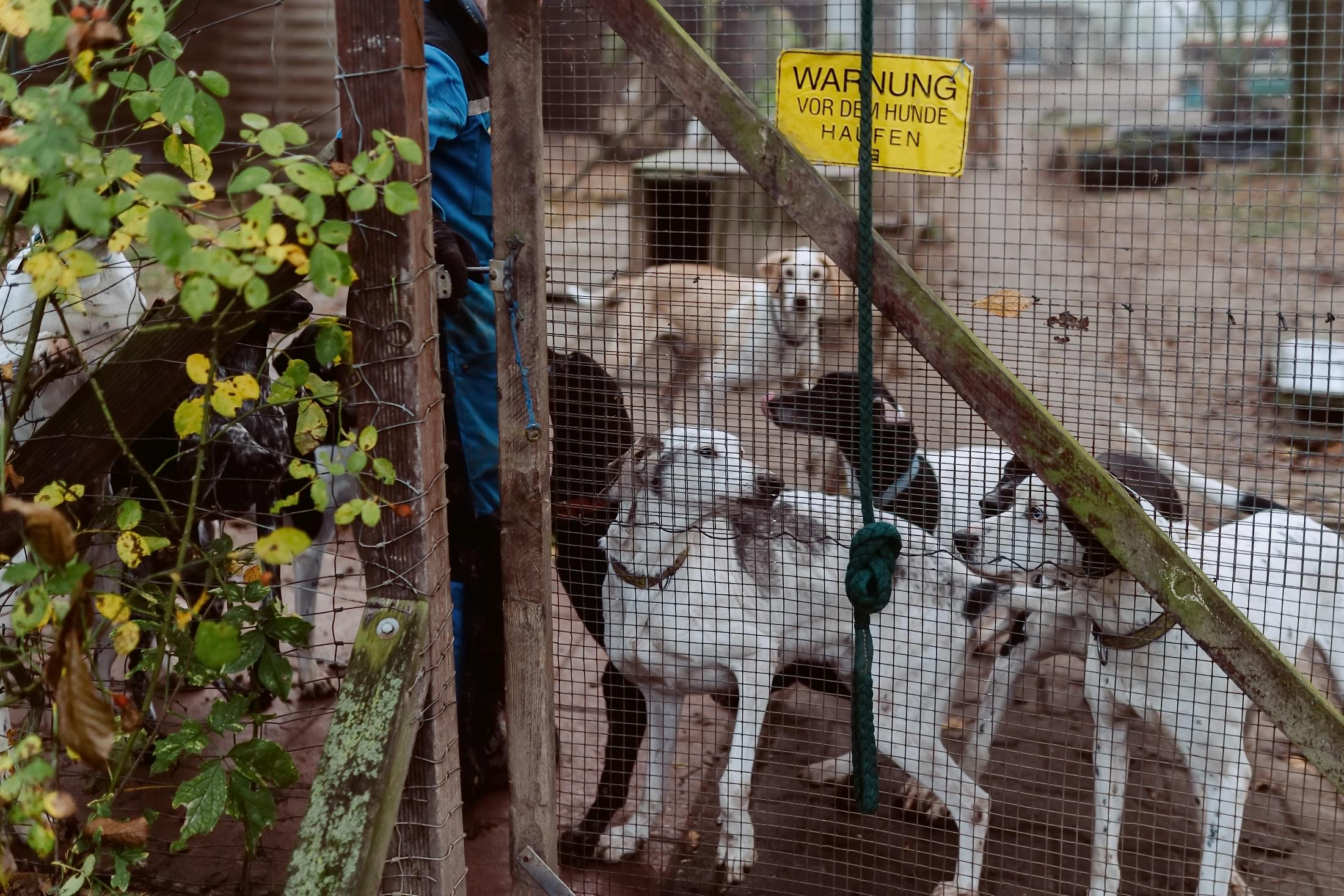 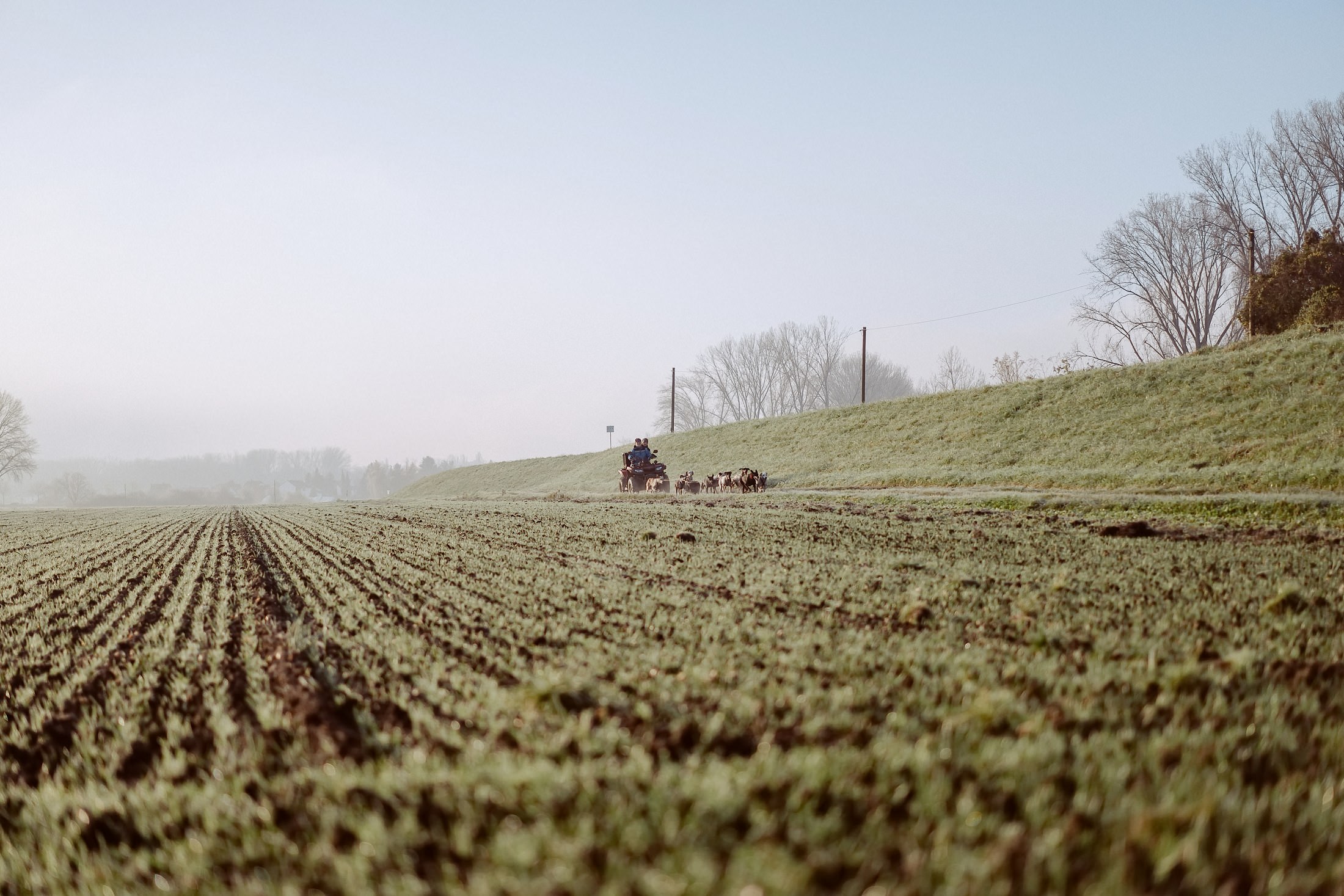 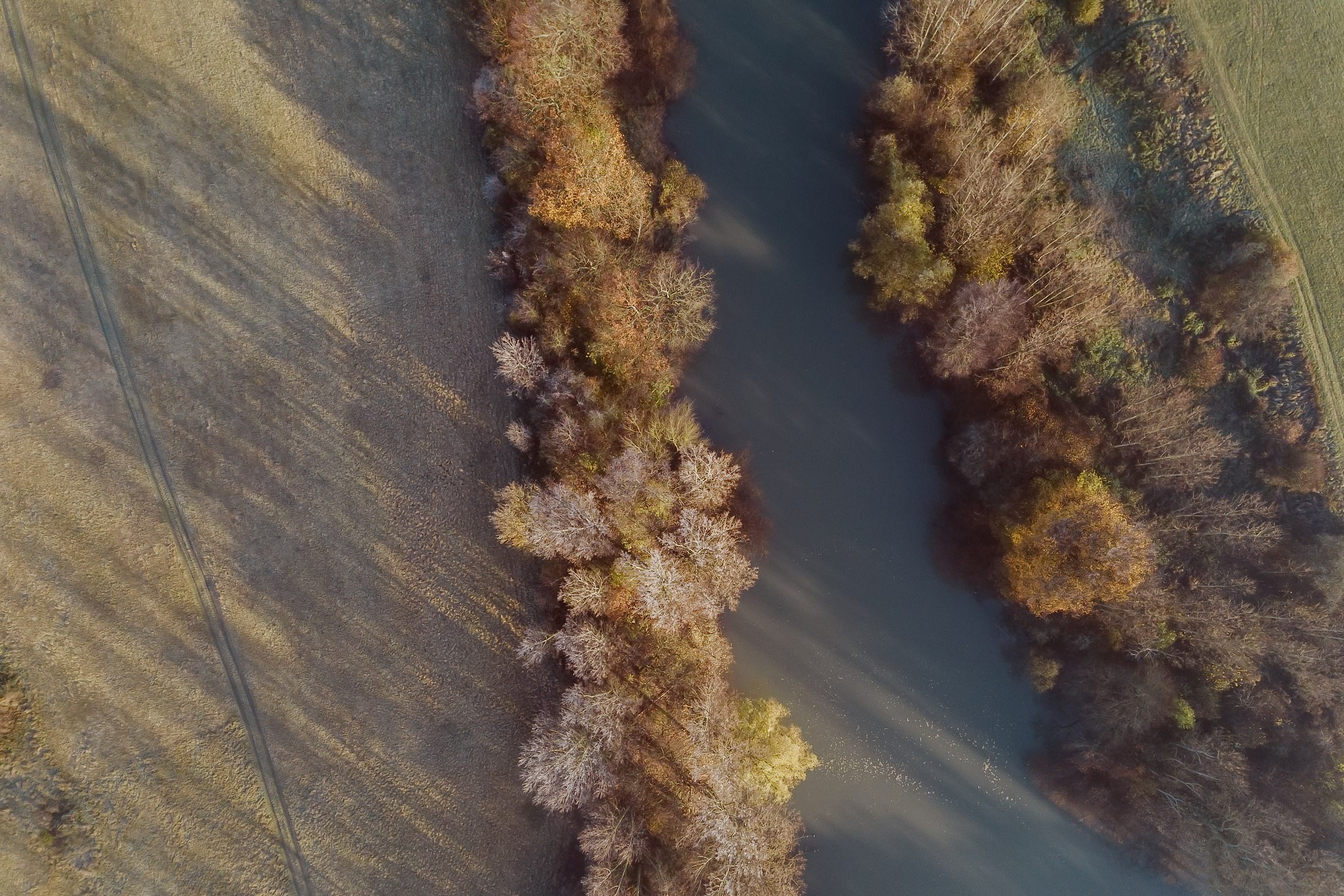 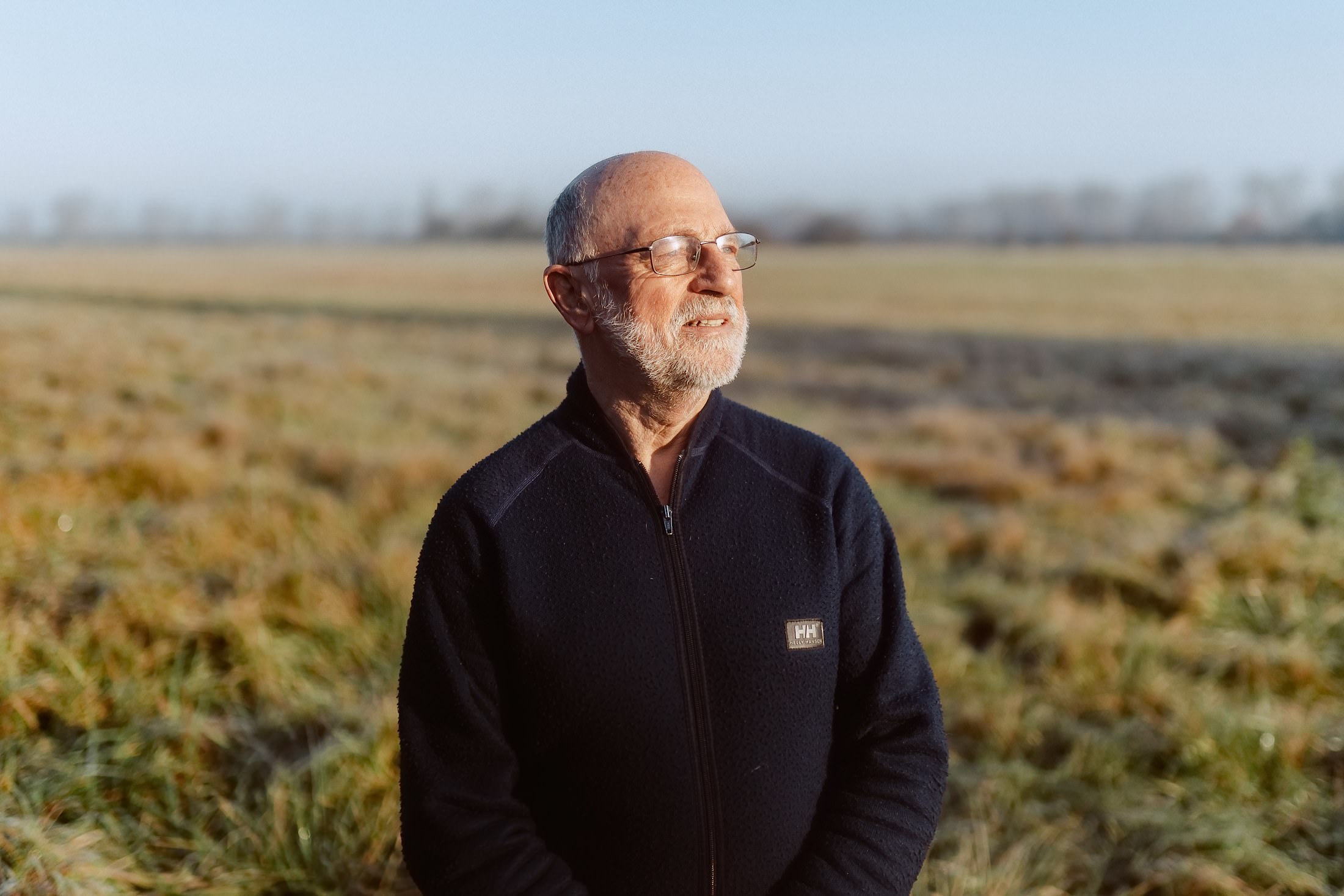 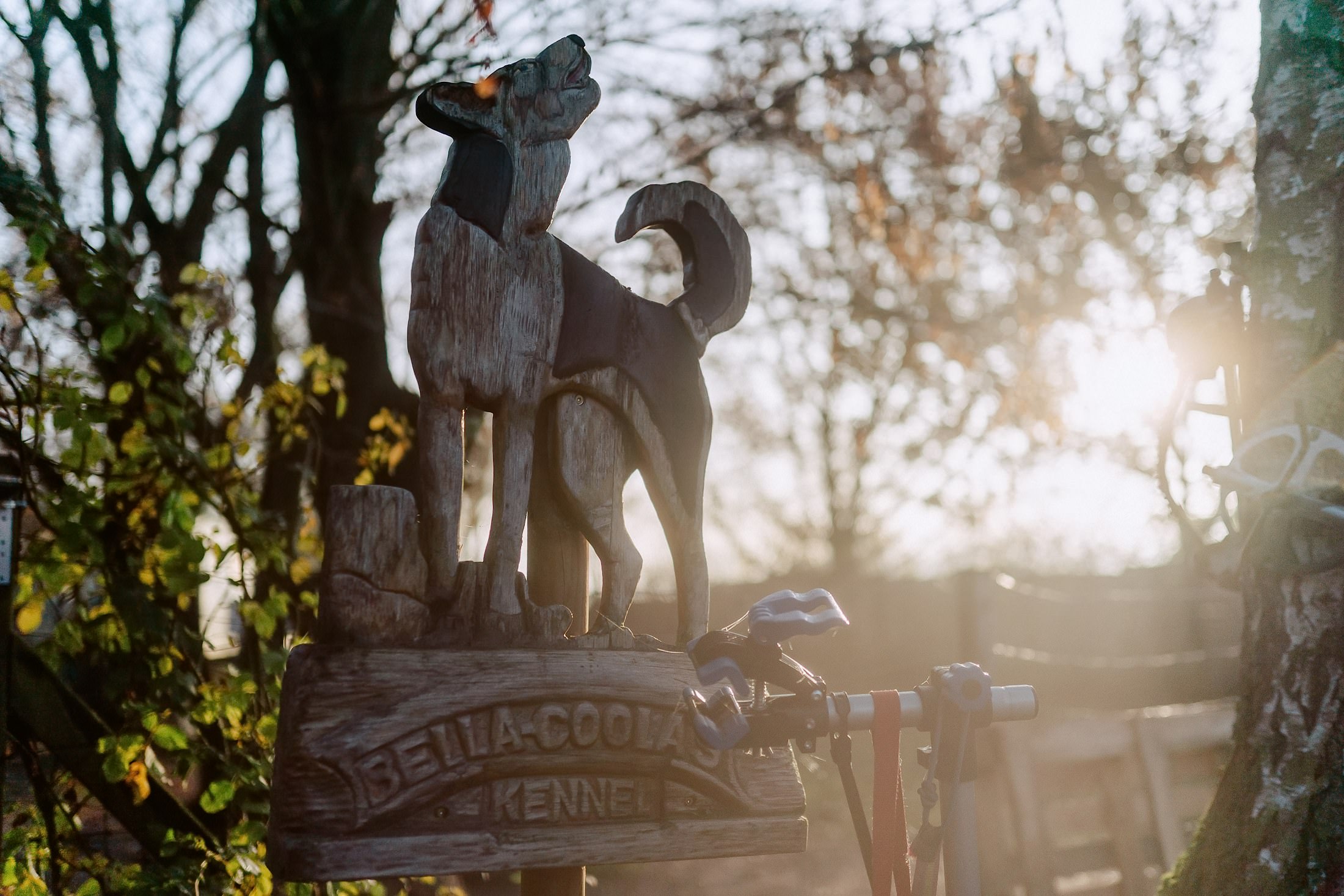 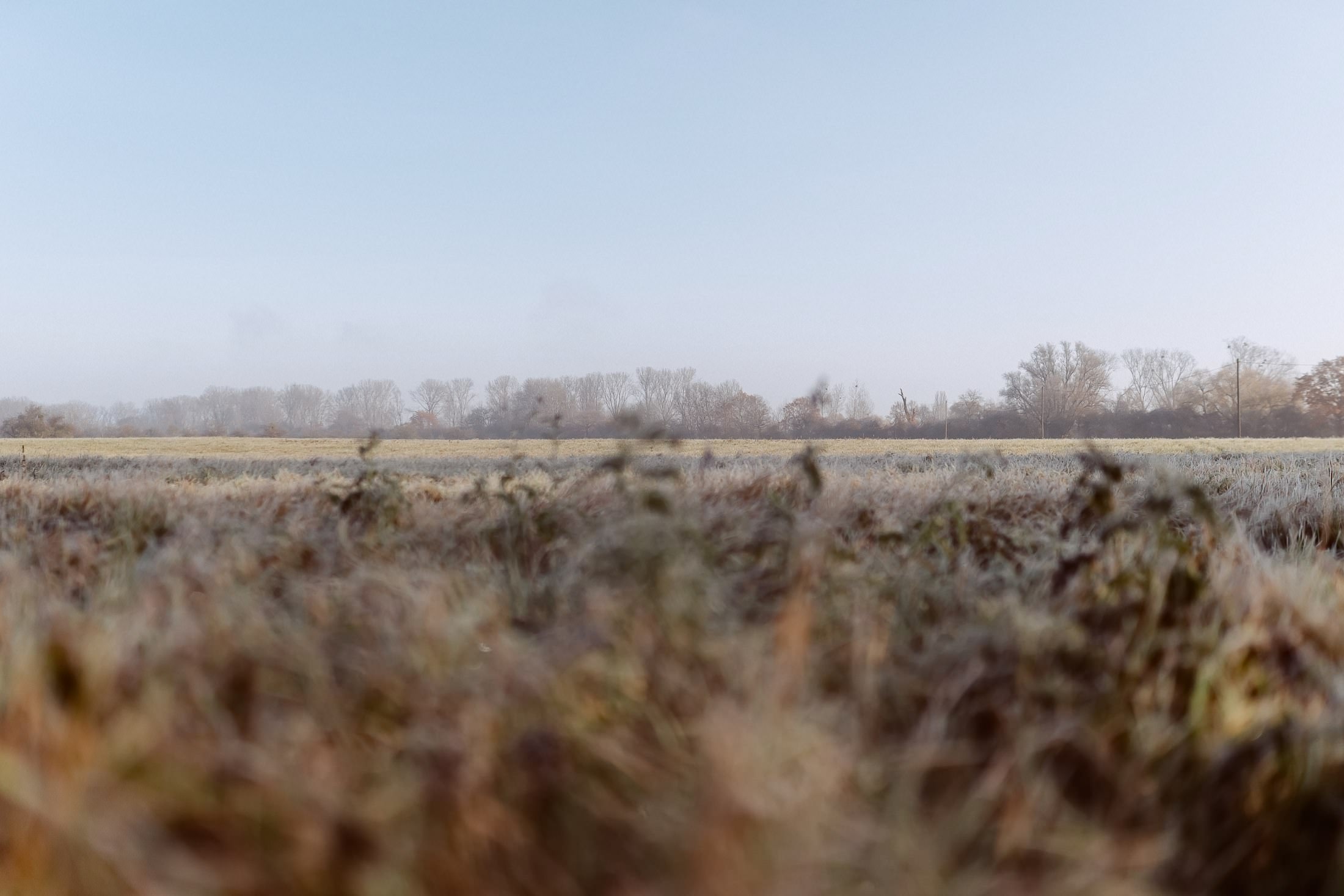 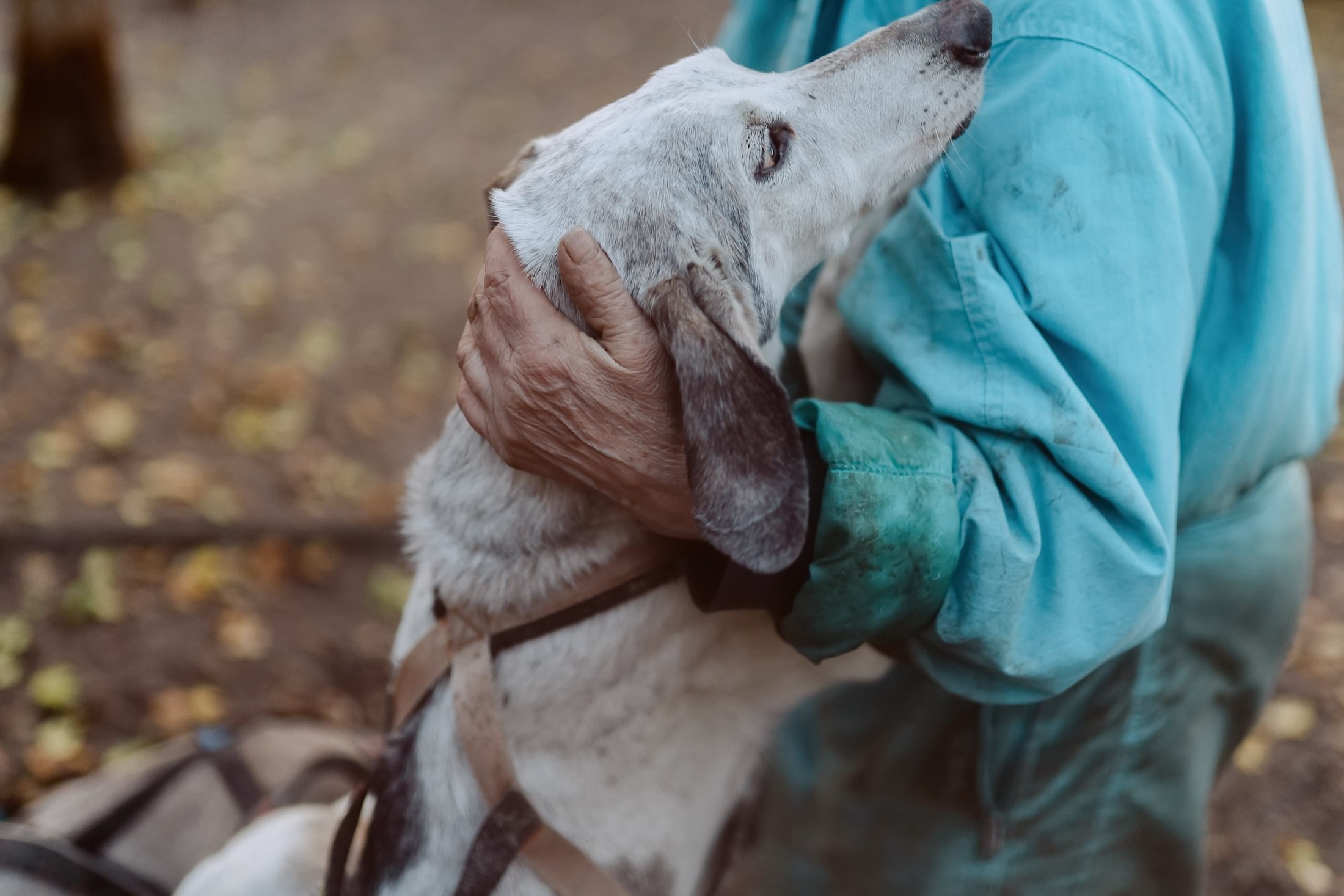 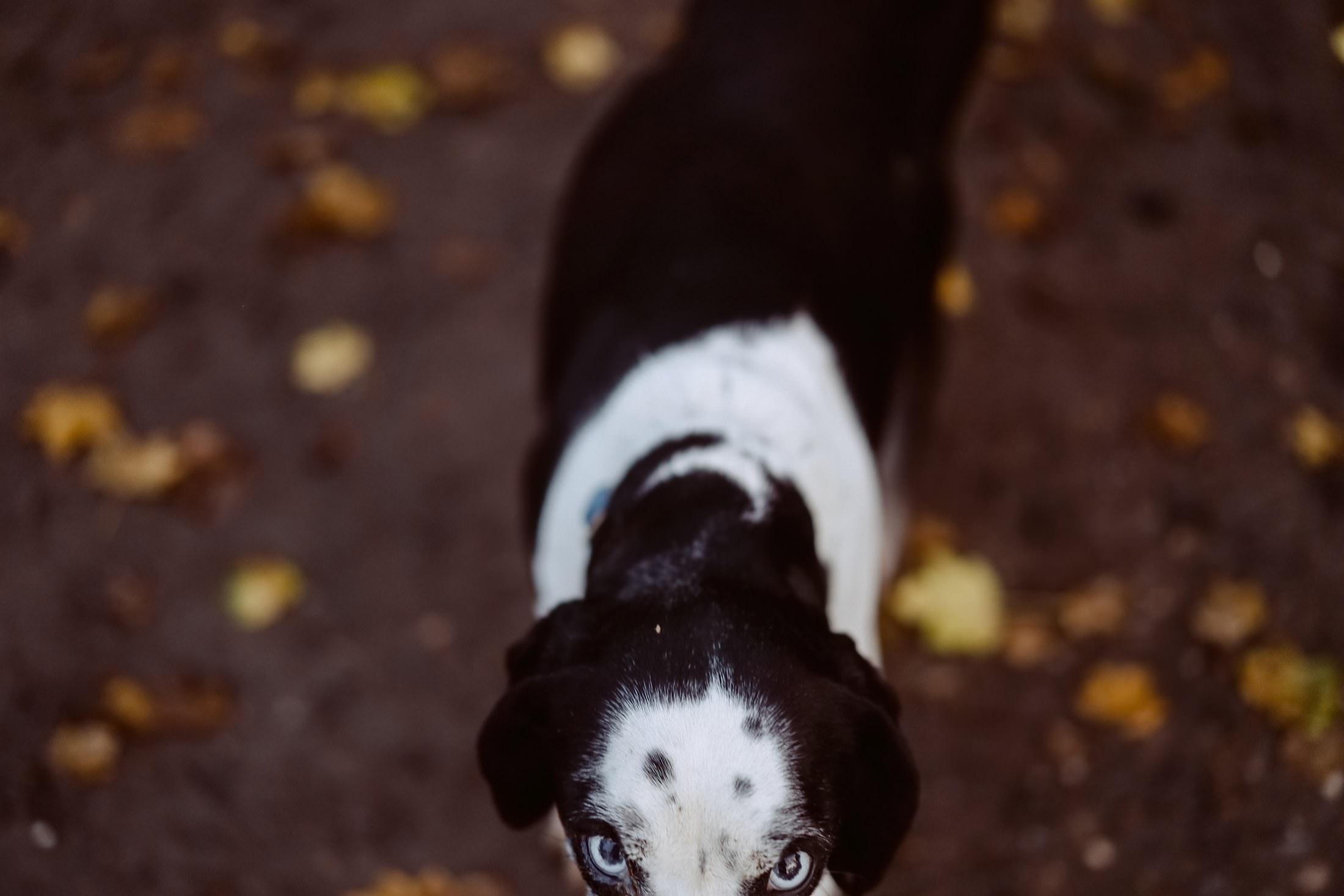