No building is as interwoven with the history of the town of Landau as the Haus zum Maulbeerbaum. This is what architect and conservationist Gunhild Wolf thinks. She founded a cooperative with 70 citizens and thus saved the town’s oldest building from demolition.

It is a building that has borne the same name for some 700 years. This fact alone makes the Haus zum Maulbeerbaum an oddity already. 700 years—admittedly, the plant that grows in the courtyard at Marktstraße 92 right in the city centre and in the immediate vicinity of Stiftsplatz square and that has given the building its name is not that old. Even though Morus nigra, the black mulberry, can certainly live to be a few hundred years old. Gunhild Wolf can’t remember for sure whether or not the tree was already there when she first walked into the building in 1987. Perhaps she simply didn’t notice it between all the crumbling plaster and the ‘charm of the old,’ as she calls it today. While looking for a home, she and her husband came across the historic building back then. When Gunhild discovered the remains of a Baroque painting above a window on the first floor, she had caught the bug: “I’ve never forgotten it.”

35 years later, Gunhild’s gaze lingers on the façade. She is visibly proud, although chipboard covers some of the windows and holes pierce the brickwork: “It used to be much worse!” she exclaims. She is still outraged by the state the building was left in—not only on her first visit in 1987, but also in 2011, when she founded an association to save the oldest house in town. The fact that it is still there at all is also, and above all, thanks to her.

However, young Gunhild and her husband quickly realised that they didn’t want to buy the house for themselves: too big, too little green around it. But she couldn’t stop thinking about the property anymore. She has been drawn to old houses ever since her apprenticeship as a draughtswoman. She studied architecture and specialised in the conservation of historical monuments. The Haus zum Maulbeerbaum is certainly a monument: It was first mentioned at the end of the 13th century as a knight’s noble estate. In the centuries to follow, the building would host noblemen, market visitors, prisoners from the Electoral Palatinate, French officers and showmen with performing seals and crocodiles. One of the most important gatherings that took place here brought together up to 600 knights, the exact number depending on the source. Jewish merchants stored goods from all over the world in the rooms and ran a kosher café on the first floor until shortly before the Second World War. They were not the first people to receive hungry guests though. In fact, the building was used as an inn of some sort for 400 years. 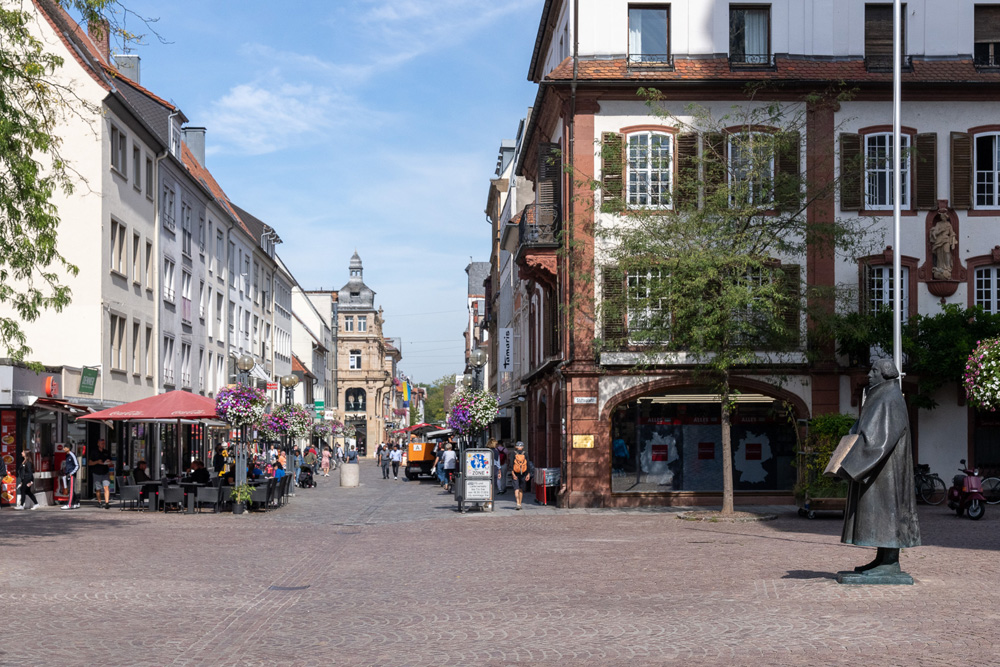 No building is as interwoven with the history of the town of Landau... 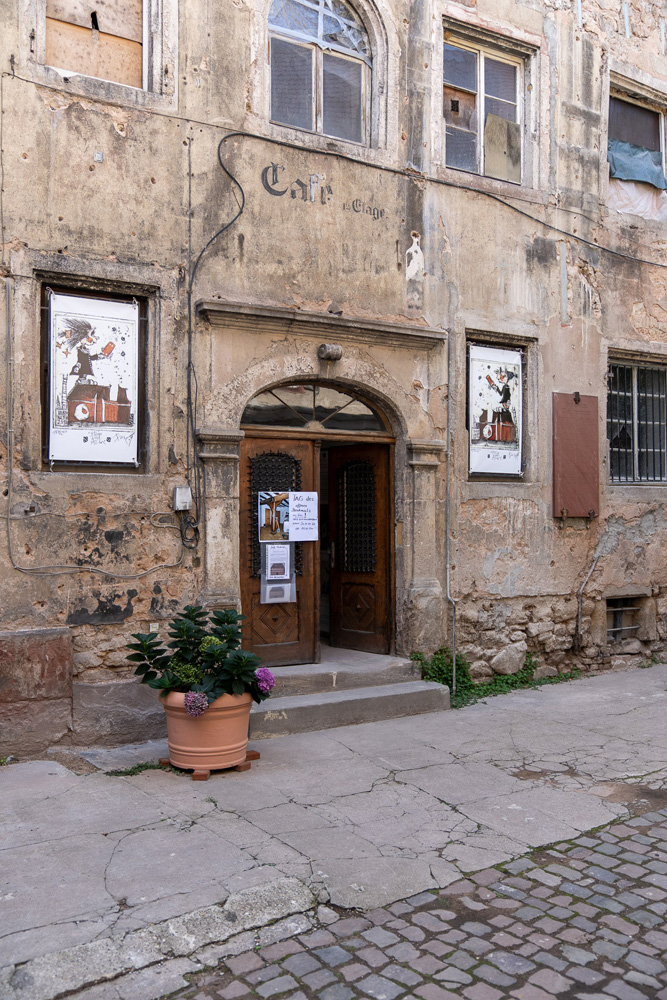 as the Haus zum Maulbeerbaum. 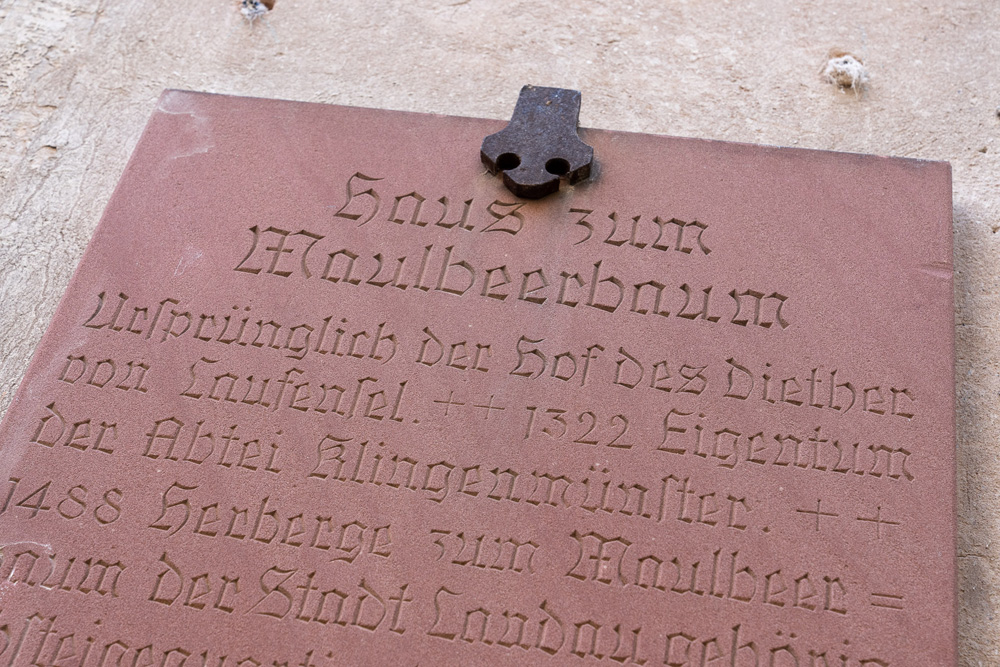 It is the town’s oldest building 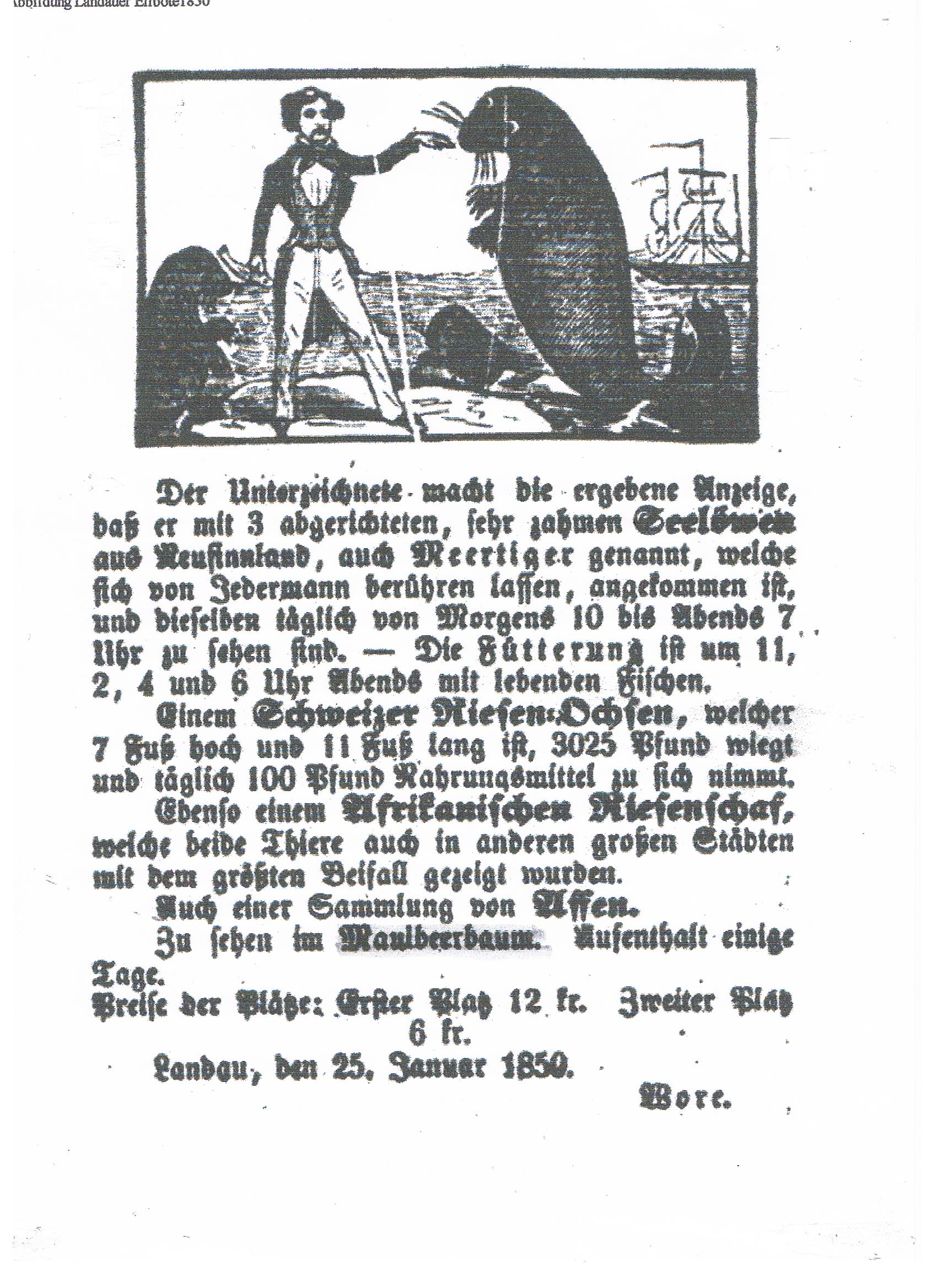 The building hosted noblemen, market visitors, prisoners from the Electoral Palatinate, French officers and showmen with performing seals and crocodiles. 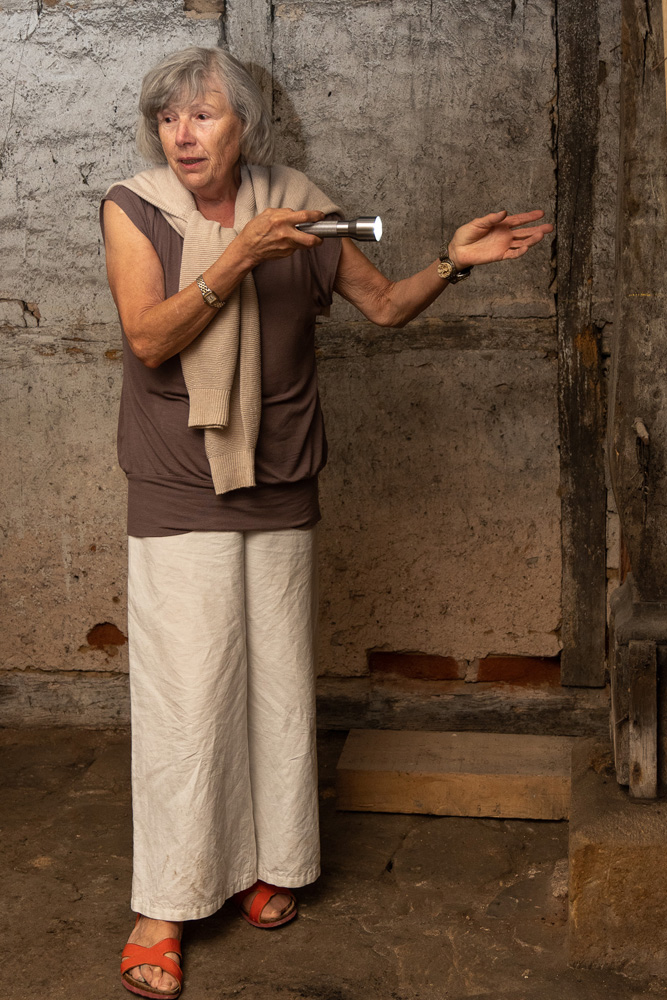 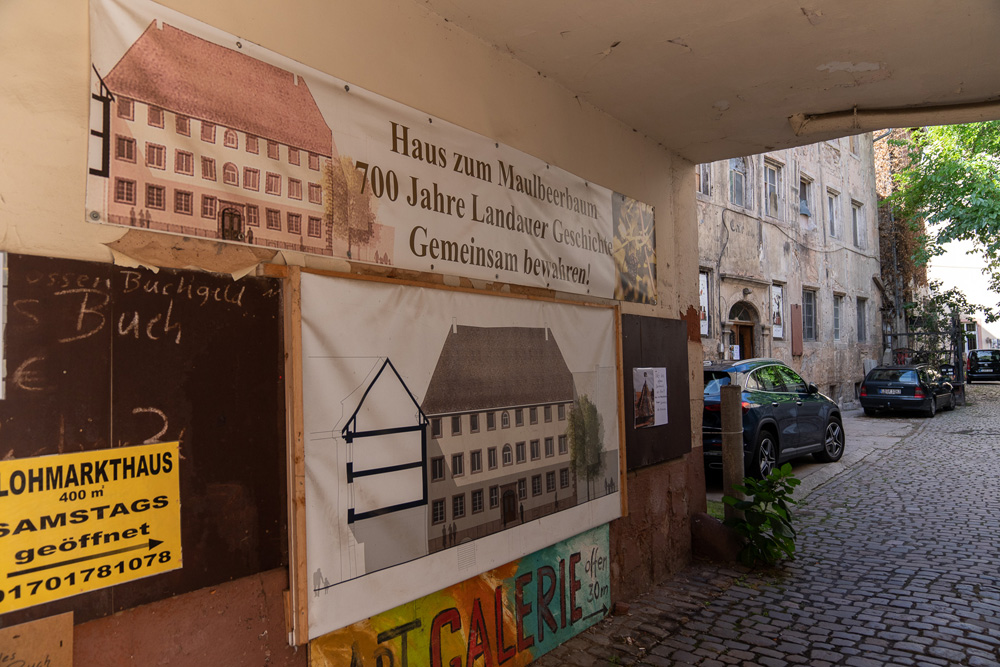 She founded a cooperative with 70 citizens 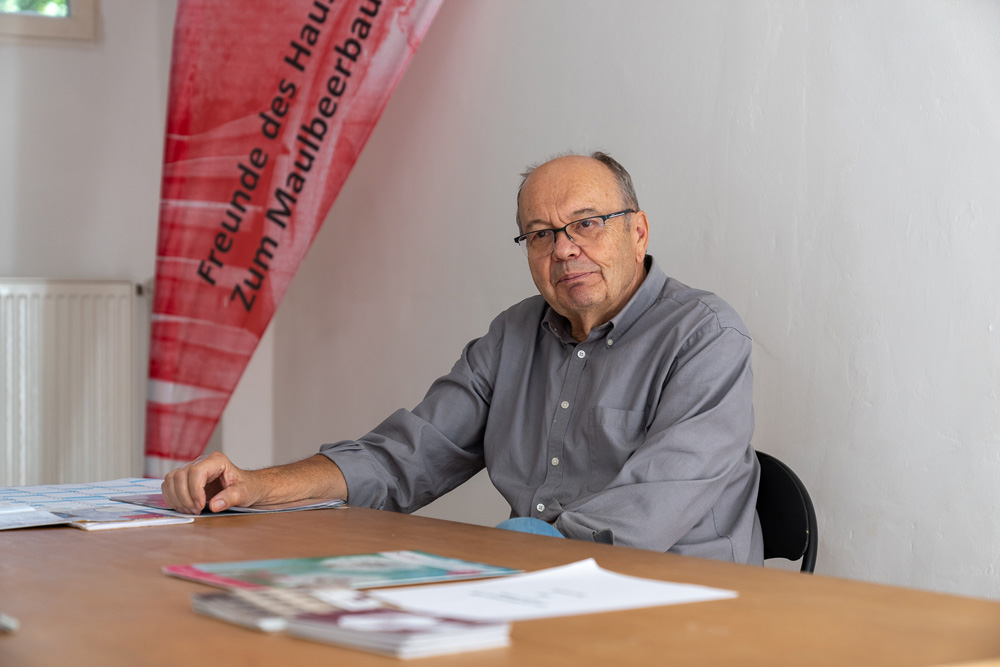 Michael Zumpe, chairman of the cooperative. 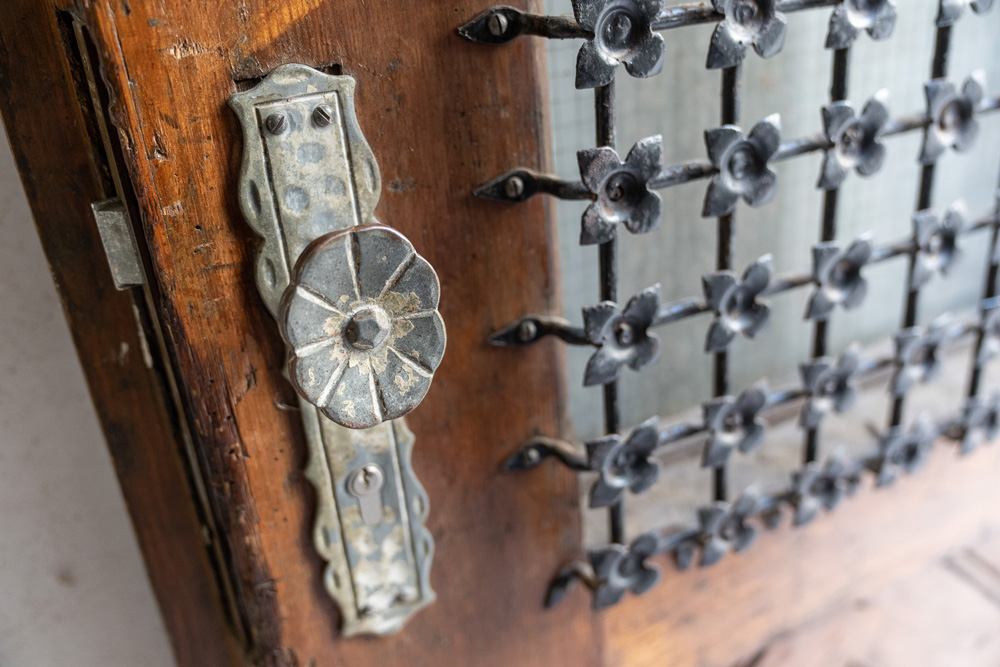 Together they saved the town’s oldest building from demolition. 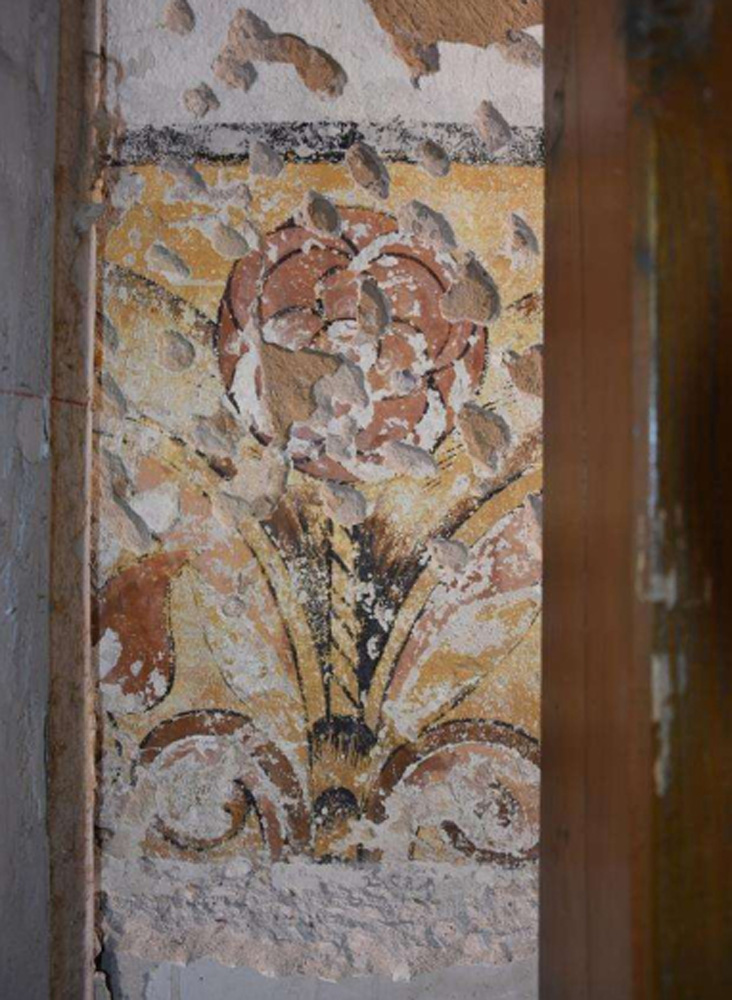 And the Baroque paintings in it. 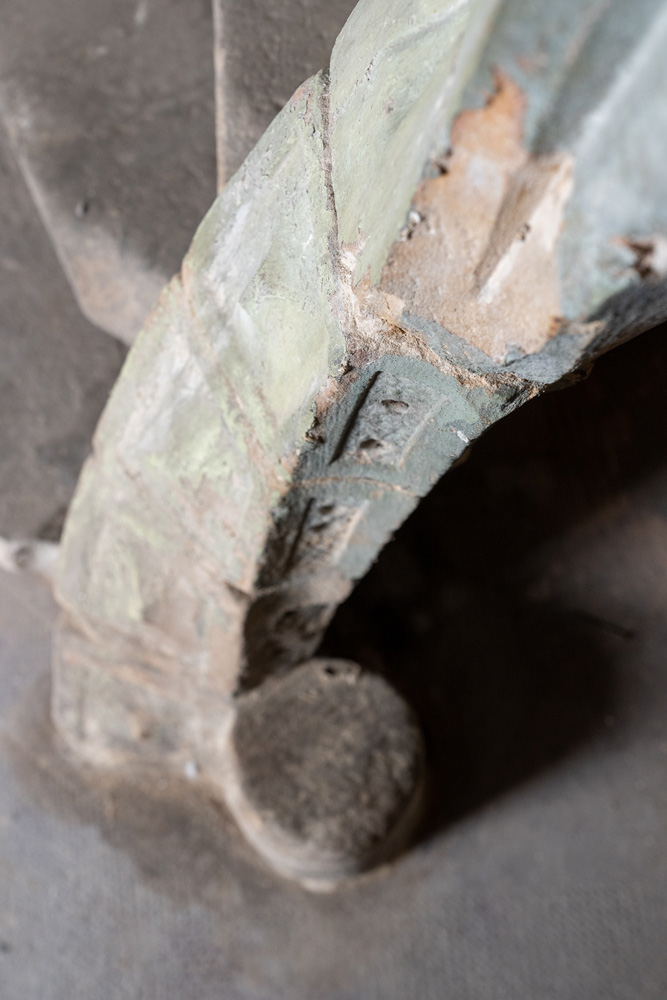 But why is the house so worth preserving? “There’s history in it,” Gunhild says. Nevertheless, it was about to be torn down at the time she ran about the heritage office looking for a job in 2011. It was after her son had moved out of home and her husband had died at an early age. Having owned the building since 2002, the town reinforced no more than the most necessary parts of it and the monument conservator in charge was looking for someone to steal the spotlight and take care of the desolate building. “That’s not who I am,” Gunhild was and is convinced—yet she accepted the task anyway.

I would love to have the museum of history of the town of Landau in here.

Most of the rooms date back to the time immediately after the Great Landau Fire, which destroyed much of the building in 1689. It was then rebuilt and its basic features haven’t changed ever after. For Gunhild, the most impressive part of the building is the ground floor with its opulent entrance hall and two other halls, in which thick wooden pillars are braced against equally thick joists. She is also taken with the ‘stony snail,’ a Renaissance-style spiral staircase that winds upwards in a tower and connects the three floors with each other.

The staircase, the three floors, the attic and the two cellars are now once again accessible. Gunhild has achieved what many thought impossible. After her visit to the heritage office, she gathered other idealists around her and founded an association: the Freunde des Hauses zum Maulbeerbaum. There were eight members at the first meeting. Four years later when a cooperative emerged from the association, some 73 Landau residents joined in. In the years that followed they talked to politicians and journalists, collected donations and subsidies, and symbolically sold the stones of the façade and the windows overlooking the courtyard. Gunhild even wrote a children’s book about ‘Wisper, the little ghost of the house of the mulberry tree’.

In the end, they managed to gather 800,000 euro, the amount the city required to transfer the building to the cooperative. They held the key in their hands in 2018, and two years later work began. In danger of collapsing, the south wall was removed brick by brick and rebuilt, and the north wall stabilised with tons of mortar. Workmen examined every single beam of the roof truss for rot, reinstalled many of them and replaced some. They proceeded similarly with the clay roof tiles. Gunhild is still surprised and pleased that so much of the old substance could be preserved.

The cooperative has come to receiving a lot of praise from the local community. Initially, their endeavour had been criticised though. “The old stuff has to go,” was the general sentiment all too often. This opinion only changed when a restorer discovered inscriptions from the beginning of the 18th century on the first floor in 2014. Gunhild had gotten the ball rolling on the search because the Baroque painting wouldn’t let her go: “I just wanted to know if there was more.” It was she who chose the spot to start the search. And right there, a saying from the Luther Bible came to light. “That was crazy.”

She would love to have more walls uncovered, to search for more paintings and inscriptions—not least to finally find out what such decorations were doing in a civil house. But the work is at a standstill. The house is structurally secure. But the members of the cooperative cannot manage the interior work alone. They would prefer to get a patron on board, perhaps a foundation, one that could continue the careful renovation and make the results accessible to the public.

If it were up to Gunhild, the future of the building would look like this: “I would love to have the museum of history of the town of Landau in here. The famous 18th-century model of the Landau fortress would then be exhibited in one of the halls on the ground floor. On the first floor, you could admire the paintings and inscriptions. “We have made it this far,” Gundhild says, “we may even get further!” 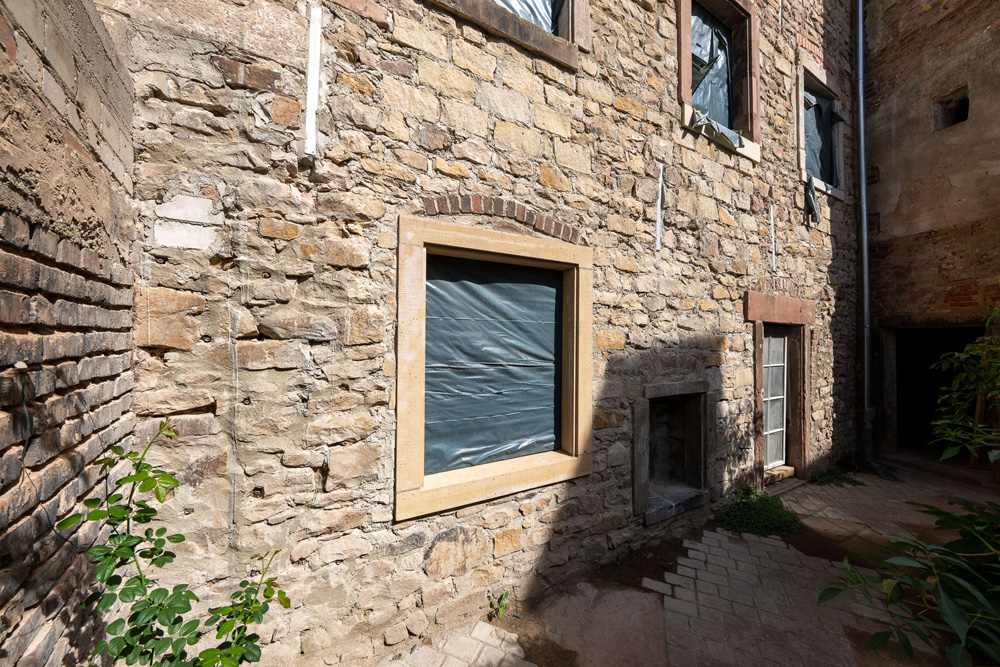 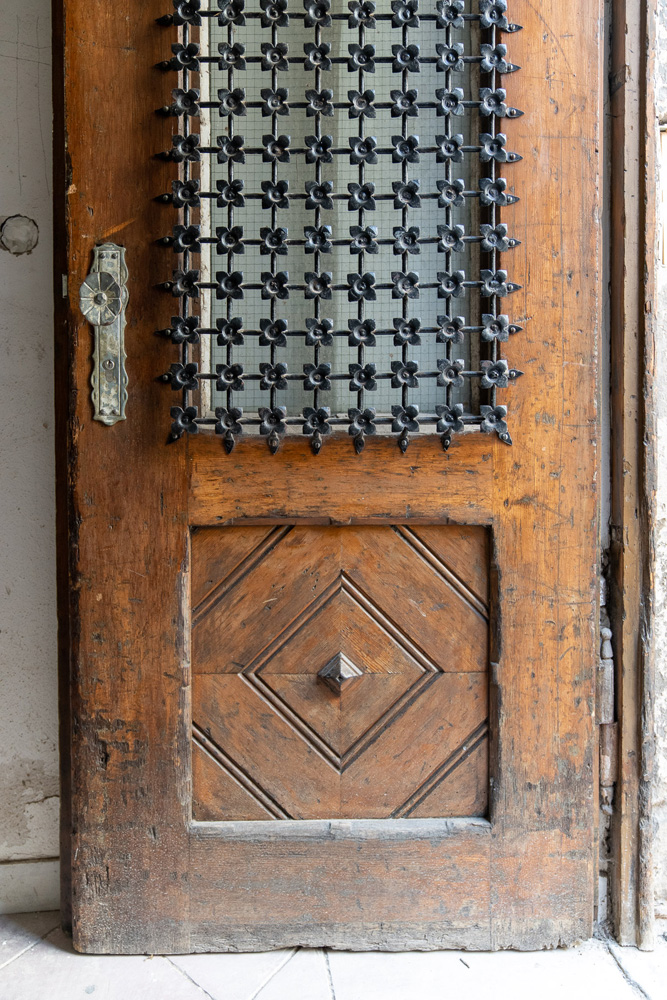 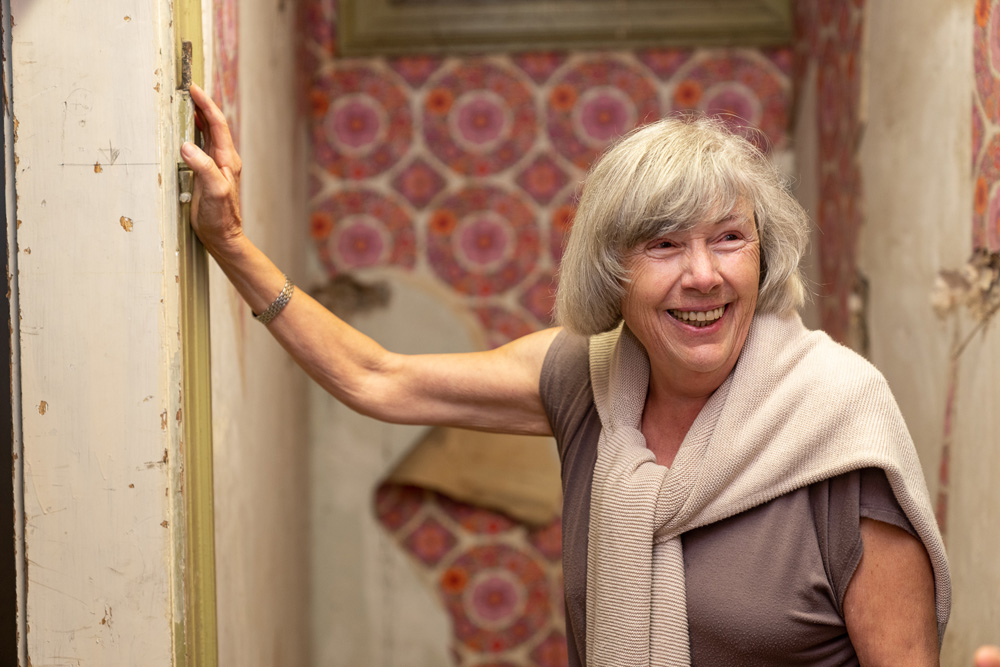 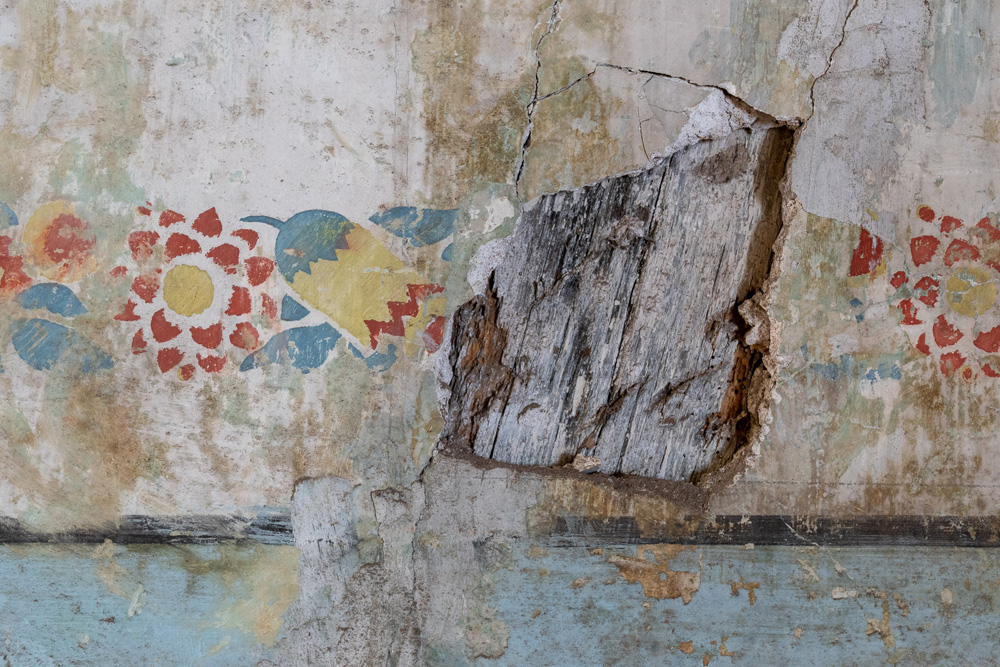 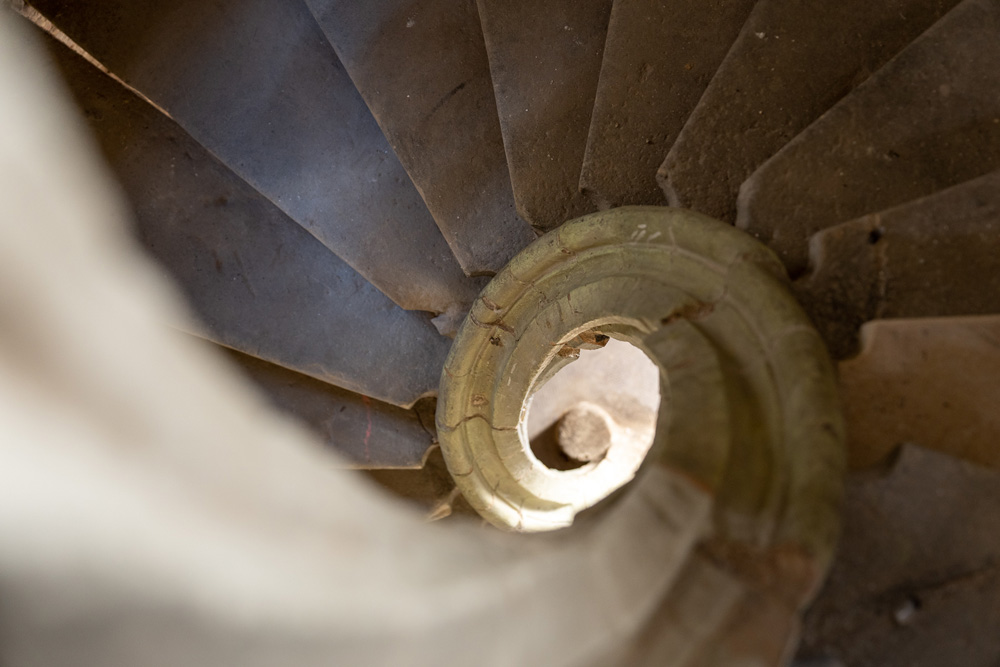 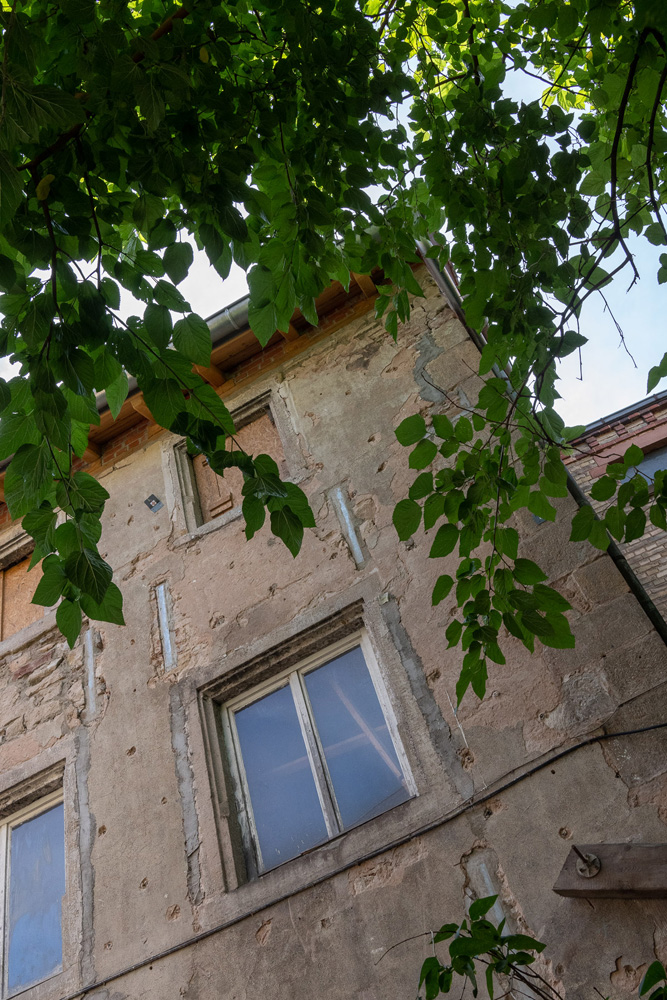 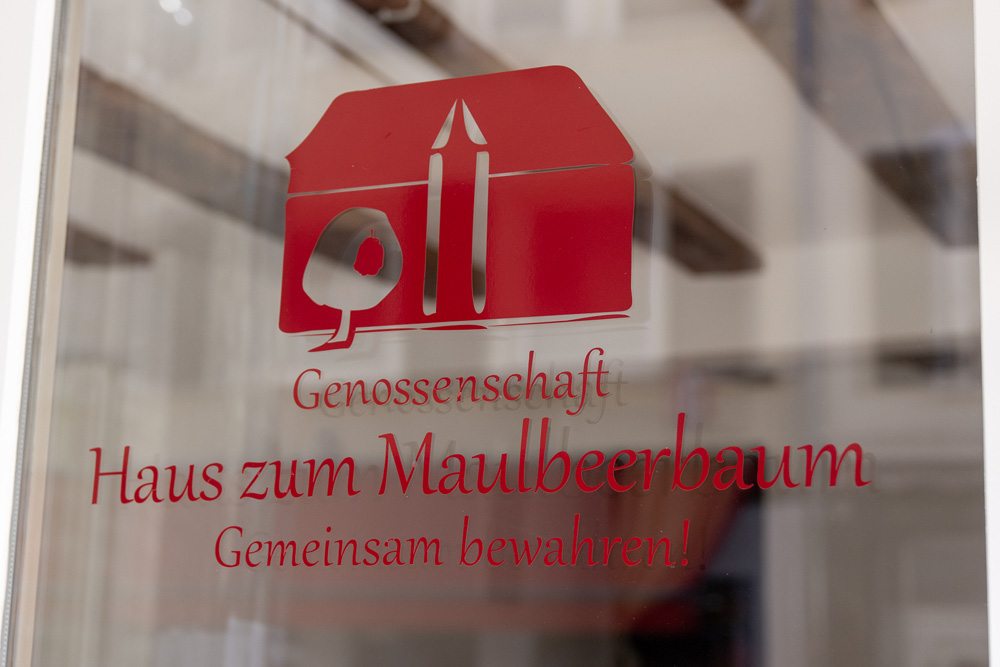 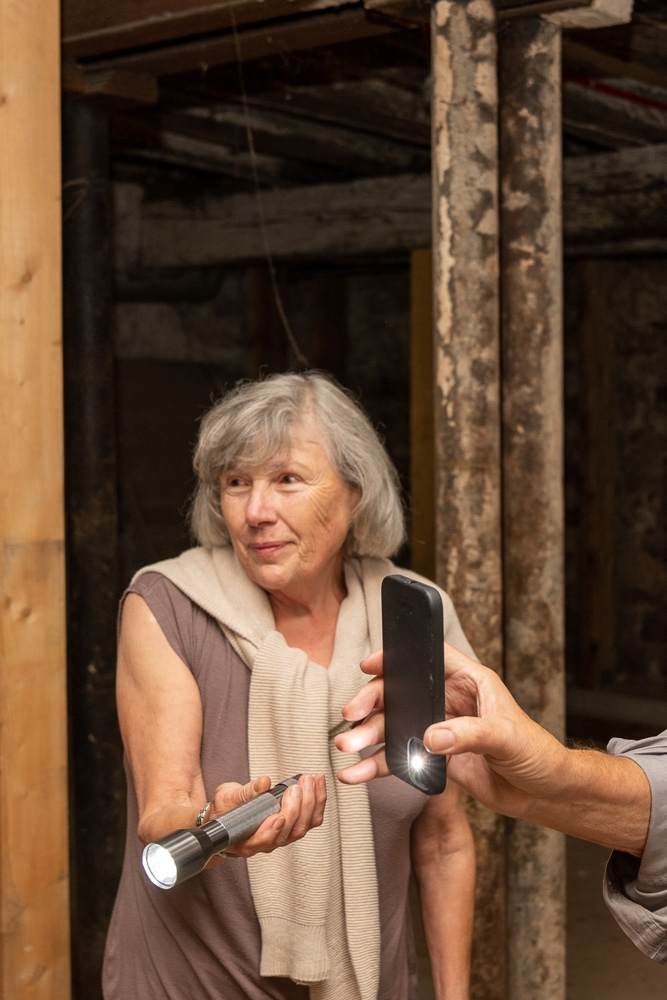