Villas that have been left vacant for decades, factories that no longer produce anything and villages that do not even contain inhabitants anymore. Vivien Räbiger captures the decay of these forgotten places with her camera. For her, they are time capsules—where she leaves nothing but footprints and from where she takes nothing but shots. Paying a visit to the Panzerwald (tank forest) near Mannheim that includes a talk about an exceptional genre in photography.

They appear suddenly between trees and behind shrubs, right in the middle of the forest: concrete walls, barbed wire, bunkers that the forest has almost swallowed entirely and a shooting ground. Panzerwald (tank forest) is the locals’ name for the area between Mannheim, Lampertheim and Viernheim. For decades, the US military used to train here—hand grenades were fired, armoured personnel carriers rolled over dunes. Silence returned in 2012. The US military left the area and the region was given back to nature by the German states that held the responsibility. 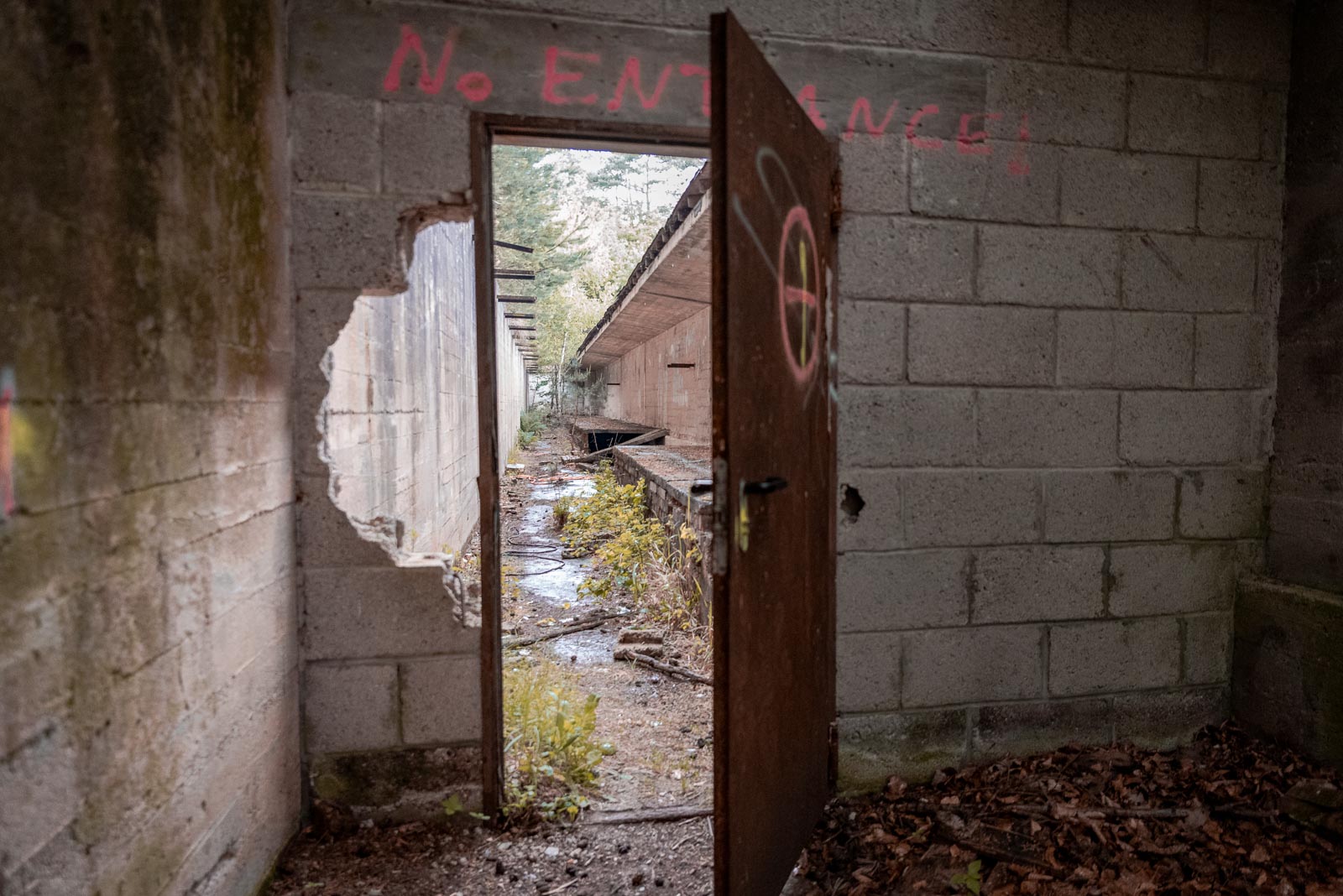 What has remained are the silent witnesses of the past that have slowly fell into rack and ruin. These places have, however, not been abandoned. Every step you make causes hopping, rustling and jumping in the grass. A place that had been a training ground for killing lessons for decades is now teeming with life. Nature has, however, been claiming the area back. Grass grows rampant through the cracks in the concrete and the gravel of the former shooting ground is strewn with little spruces, some of them only a few centimetres high. Vivien Räbiger stands in front of a little, delicate poppy flower fighting its way through stony ground. She smiles and raises her camera. 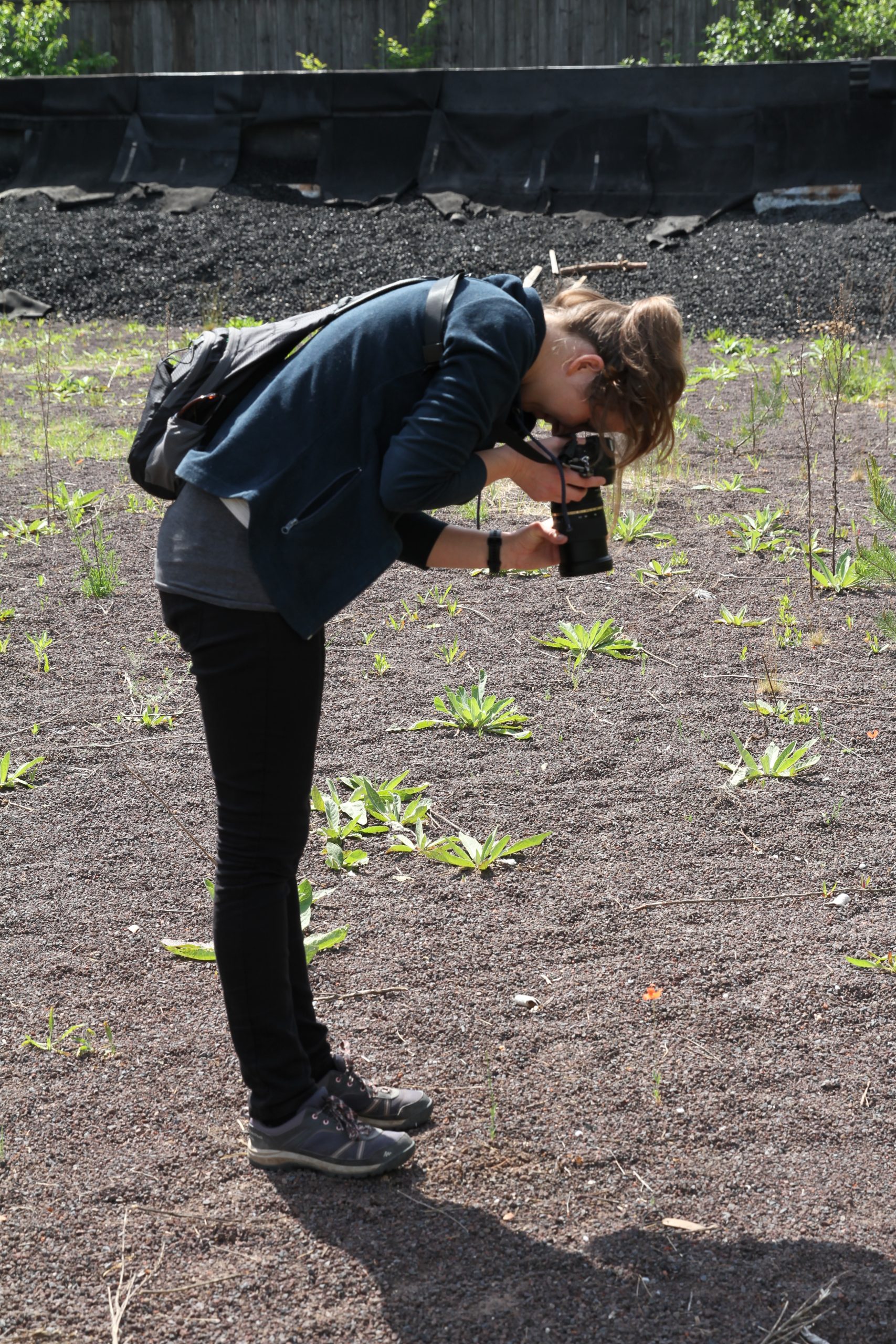 wo sonst: Do you find such places desolate?

Vivien: Desolate? Not at all. Quite the opposite! I took photos in a cooling tower of an inactive power station once—a colossal concrete thing. And a ladybird was crawling right in its middle. I find this very reassuring, just like here: We can’t destroy everything. Nature returns as soon as humans leave a place. It may be other animals that live here now or the poppies may not have even been able to grow here. But nature always finds a way.

wo sonst: What do you find exciting about such places?

Vivien: All the different contrasts—the contrast between decay and new life or civilization and nature. And the history attracts me, of course. These places have so much to tell! 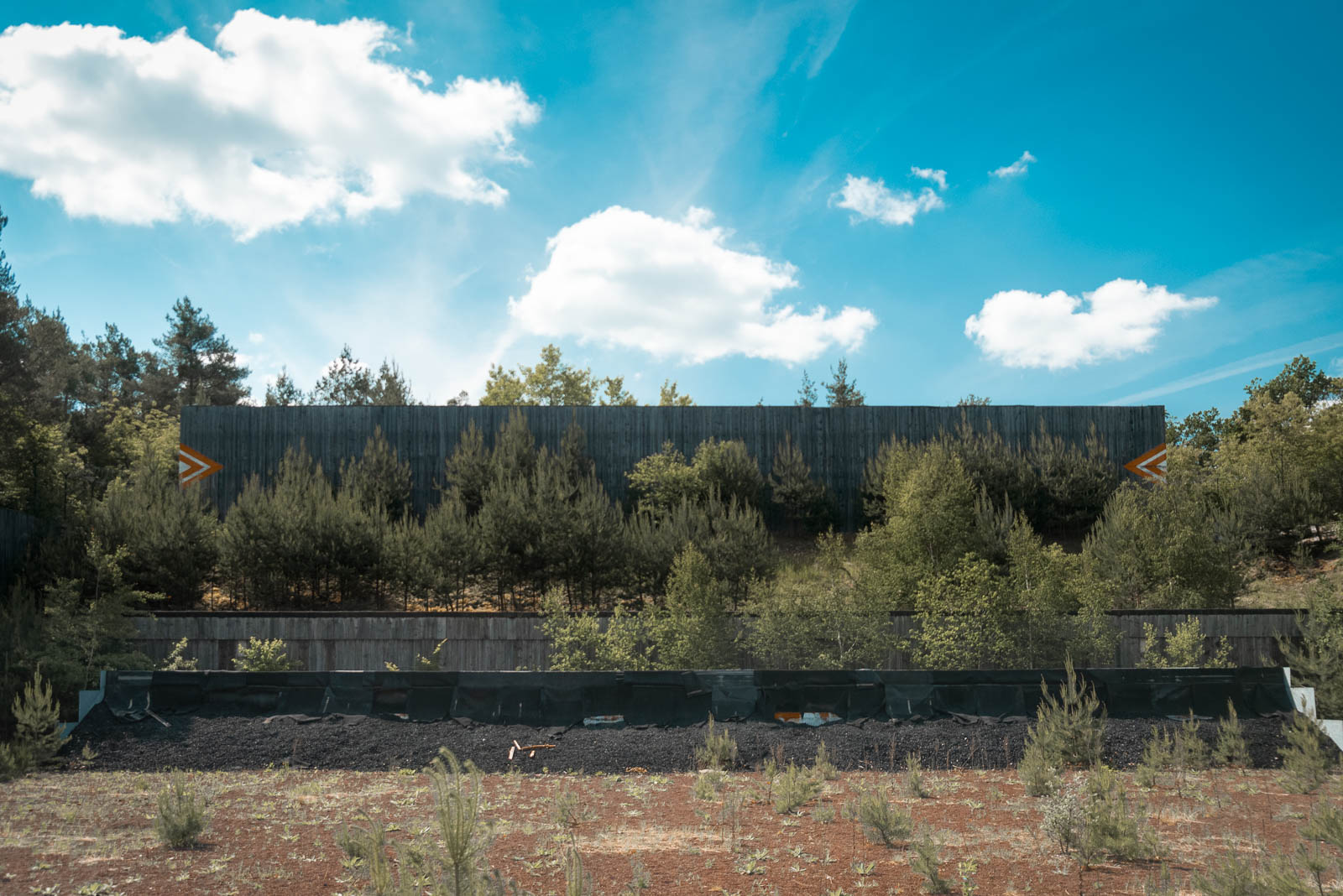 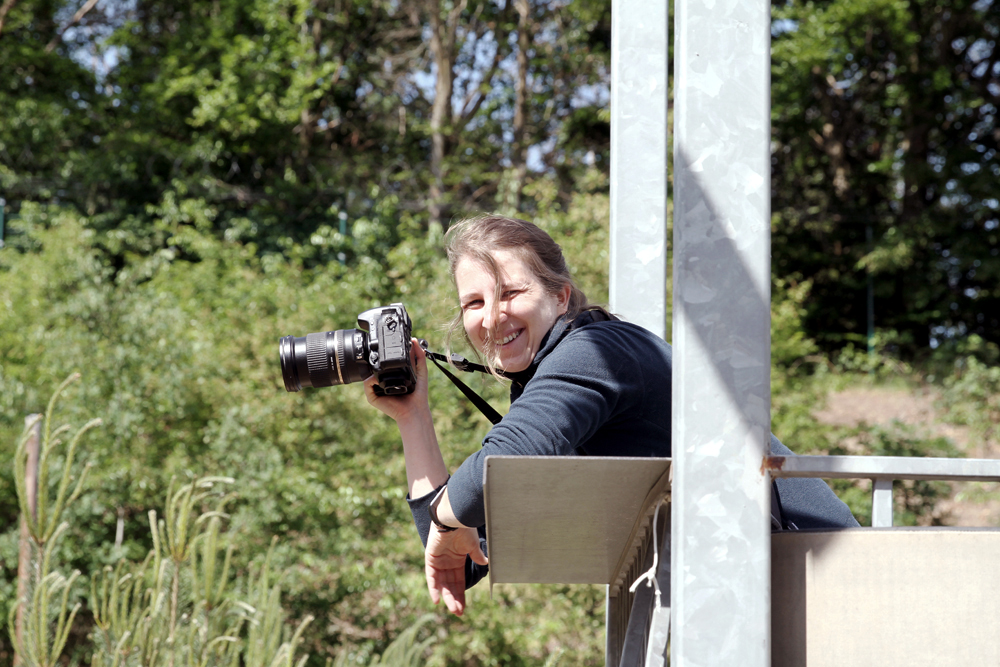 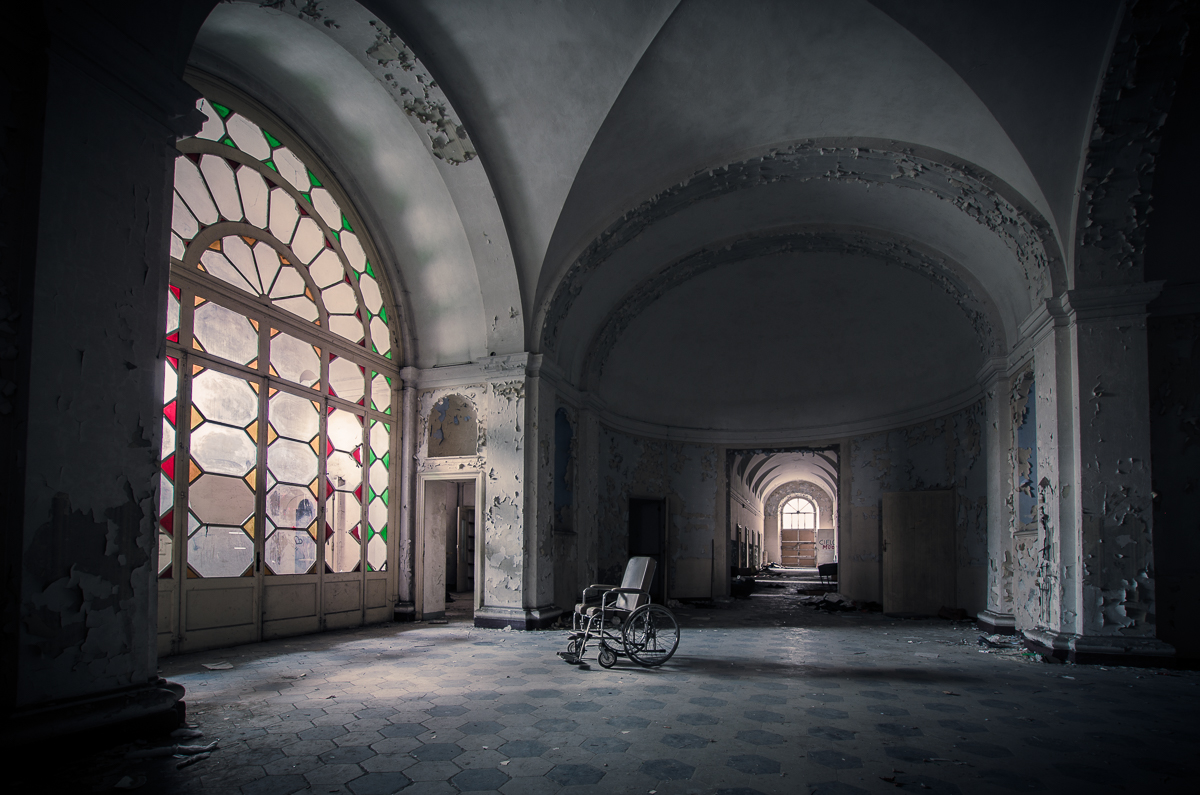 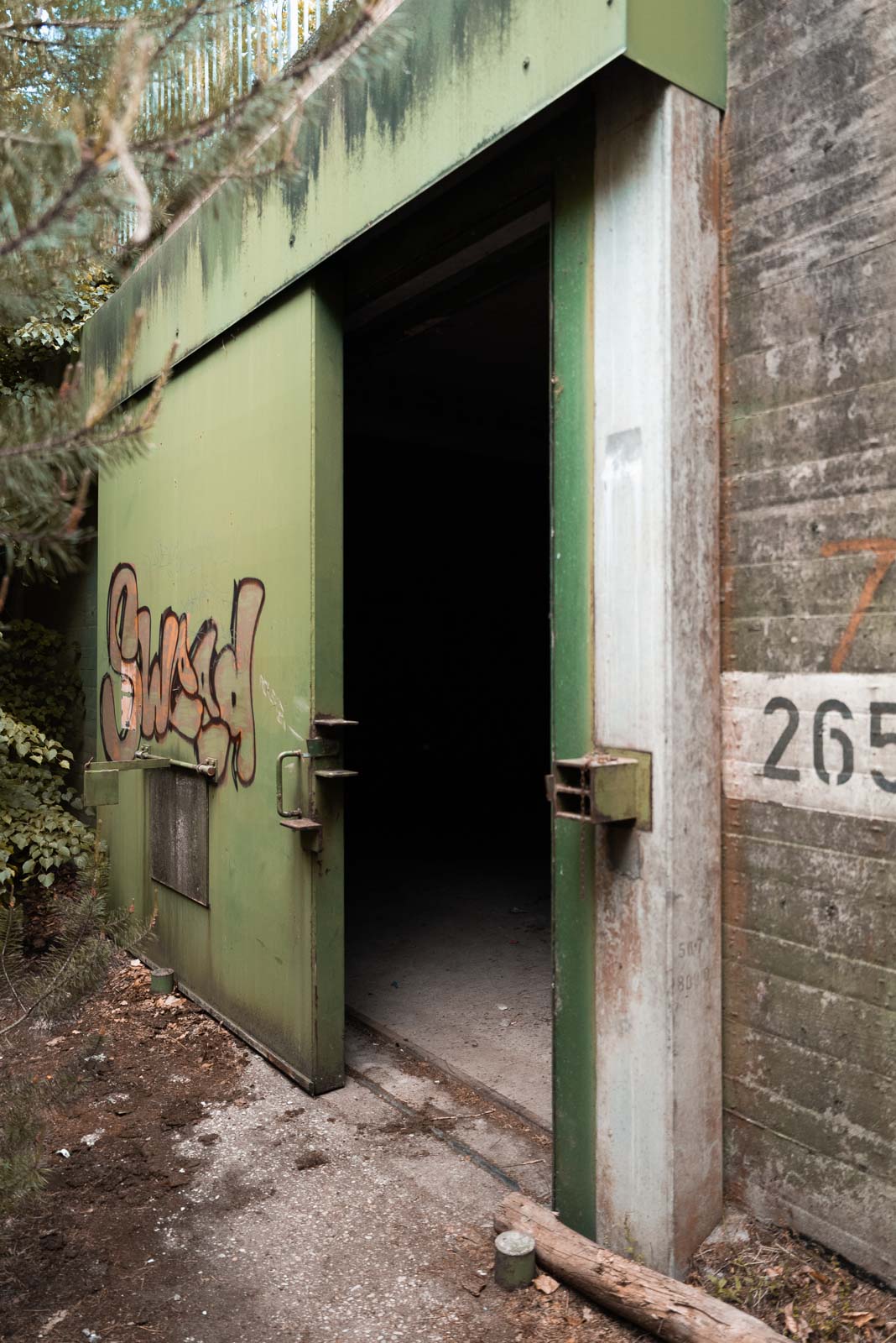 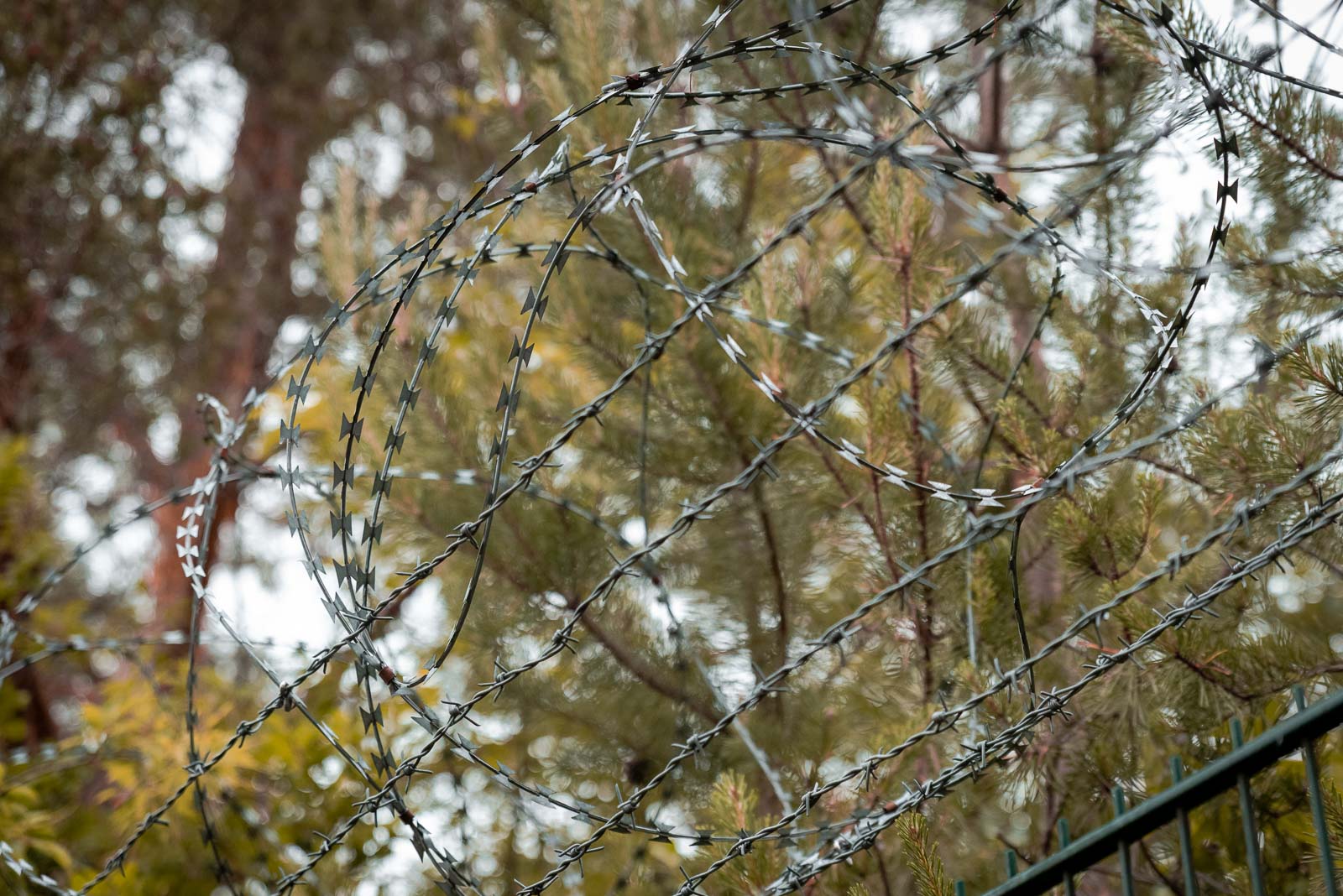 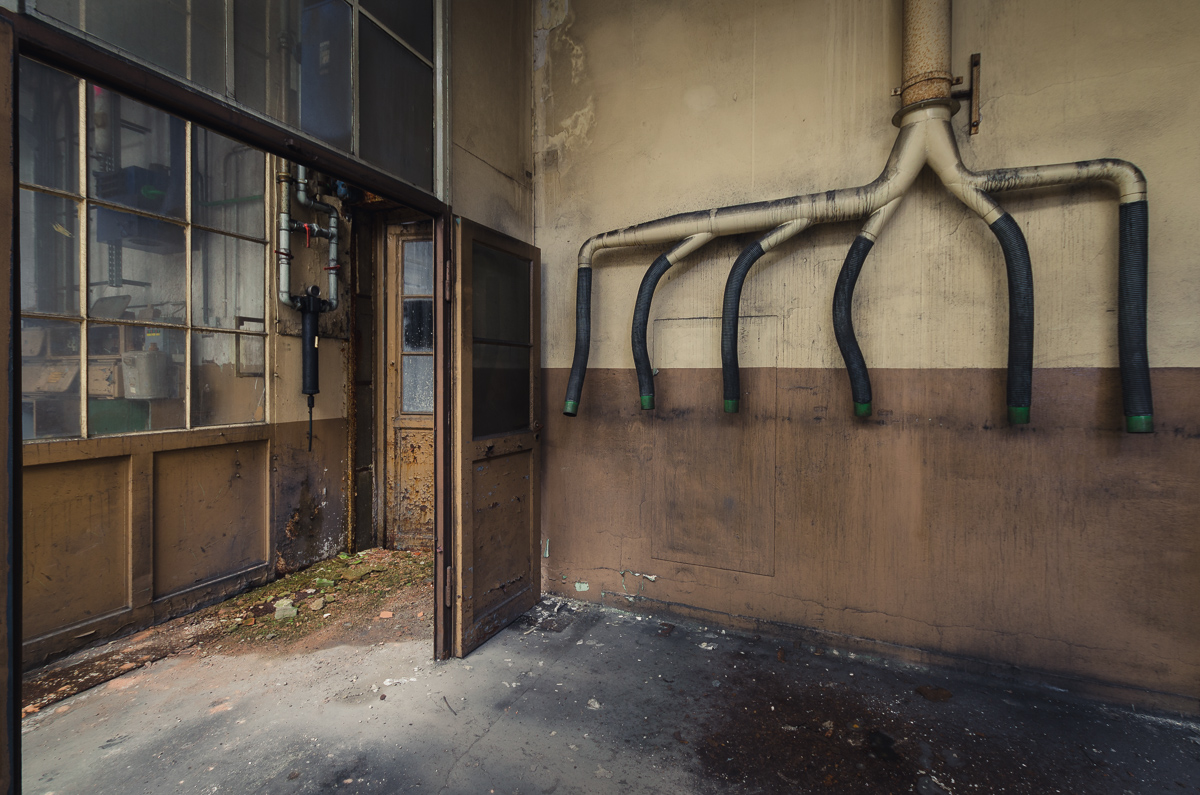 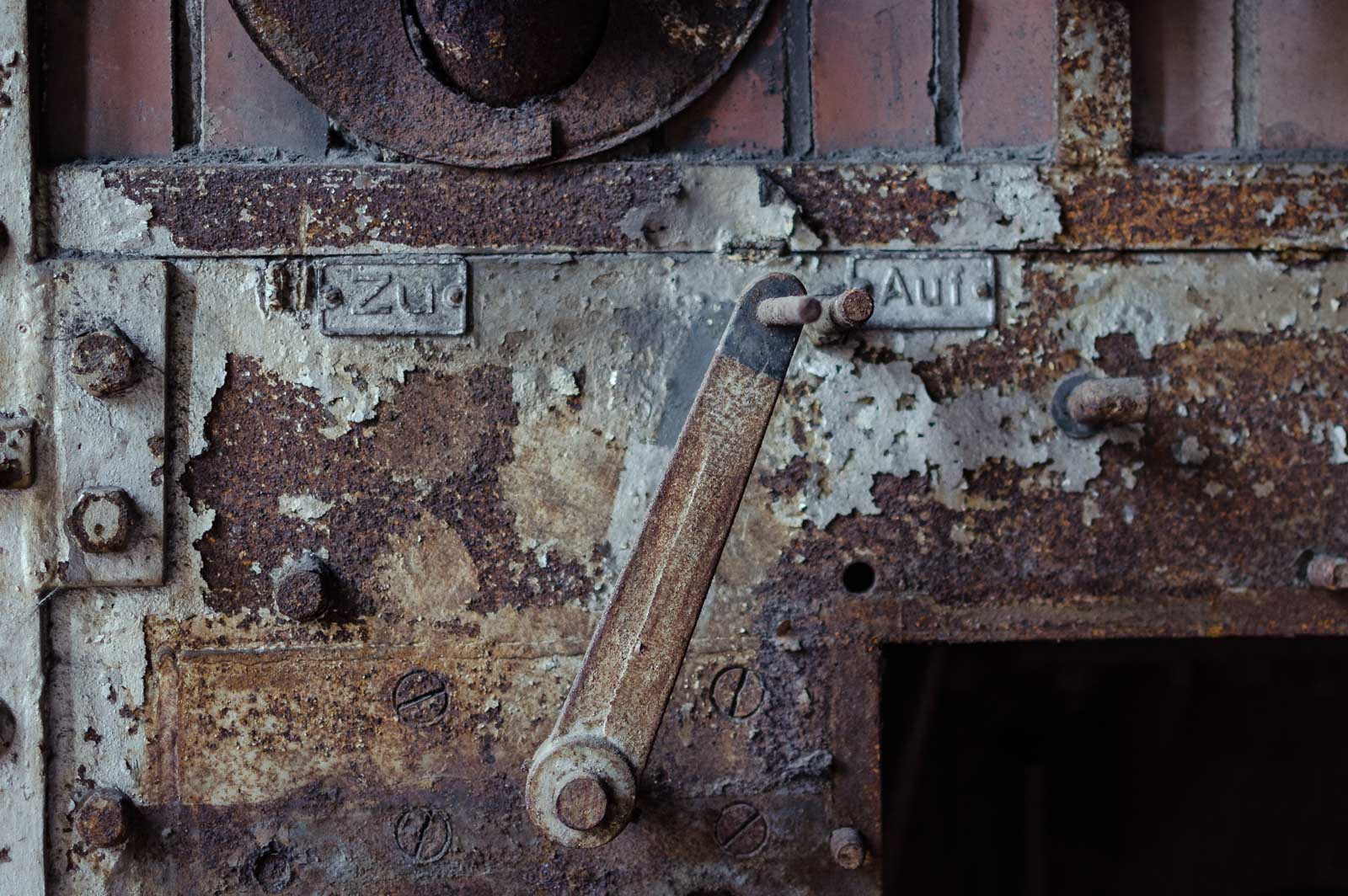 wo sonst: When did you start taking photographs?

Vivien: When I was about 15, 16 years old. With a little compact camera. I grew up in Berlin and used to take photos of friends and everyday life on the streets. But I put the camera aside after a few years—I was lacking a motif.

wo sonst: And how did you find the right motif?

Vivien: It has found me. In 2010, I began my studies for a primary-school teaching and moved to Landau for this purpose. My friend took me to an abandoned paper factory one day. I found it so cool! The ambience, the silence, the peace. Time seemed to stand still there, like in a time capsule. I returned shortly afterwards—this time with my camera. I was on fire. I began to look specifically for abandoned premises and planned my first tour through Germany, Belgium and Luxembourg. 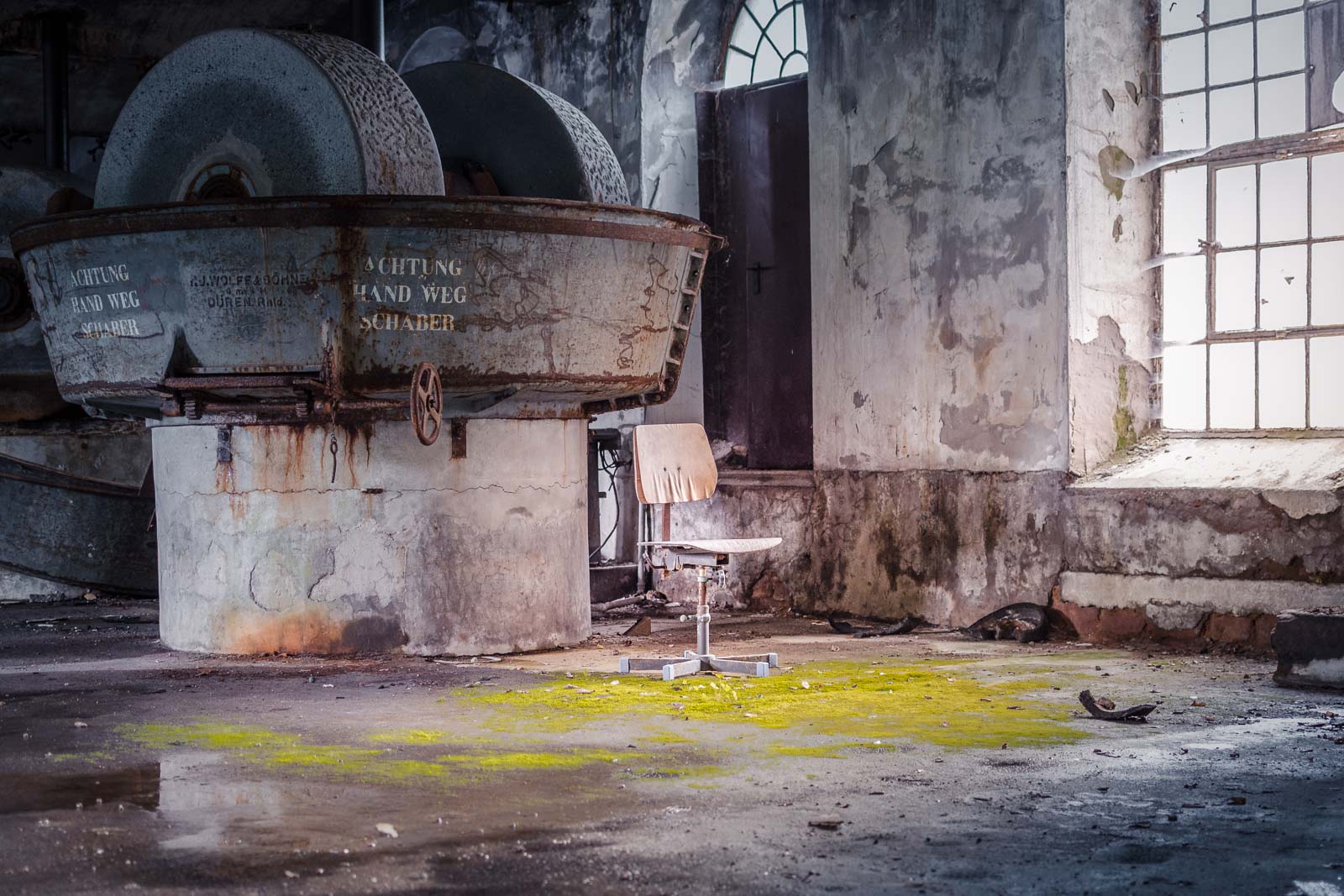 wo sonst: How do you discover Lost Places?

Vivien: I ask Google as my first step. Then I do specific research. I can now recognize old, hidden buildings with the help of satellite maps, even when they’re overgrown, by means of the shadows for example. Sometimes you just need to walk through a town with a keen eye. Or a good nose. When I walk through a street and sense this musty smell, then I get electrified!

wo sonst: What kind of places are they?

Vivien: Abandoned villas that are still fully furnished, inclusive of a piano or photo albums. As if the residents departed in a rush. Former doctor’s surgeries, even with medical records. Abandoned factories with all the machinery still there. Entire villages even. Such as the Belgian village called Doel, which had to give way to the growing Port of Antwerp. On Ibiza, I spent a night in an abandoned hotel once. Right at the sea. It was incredible. 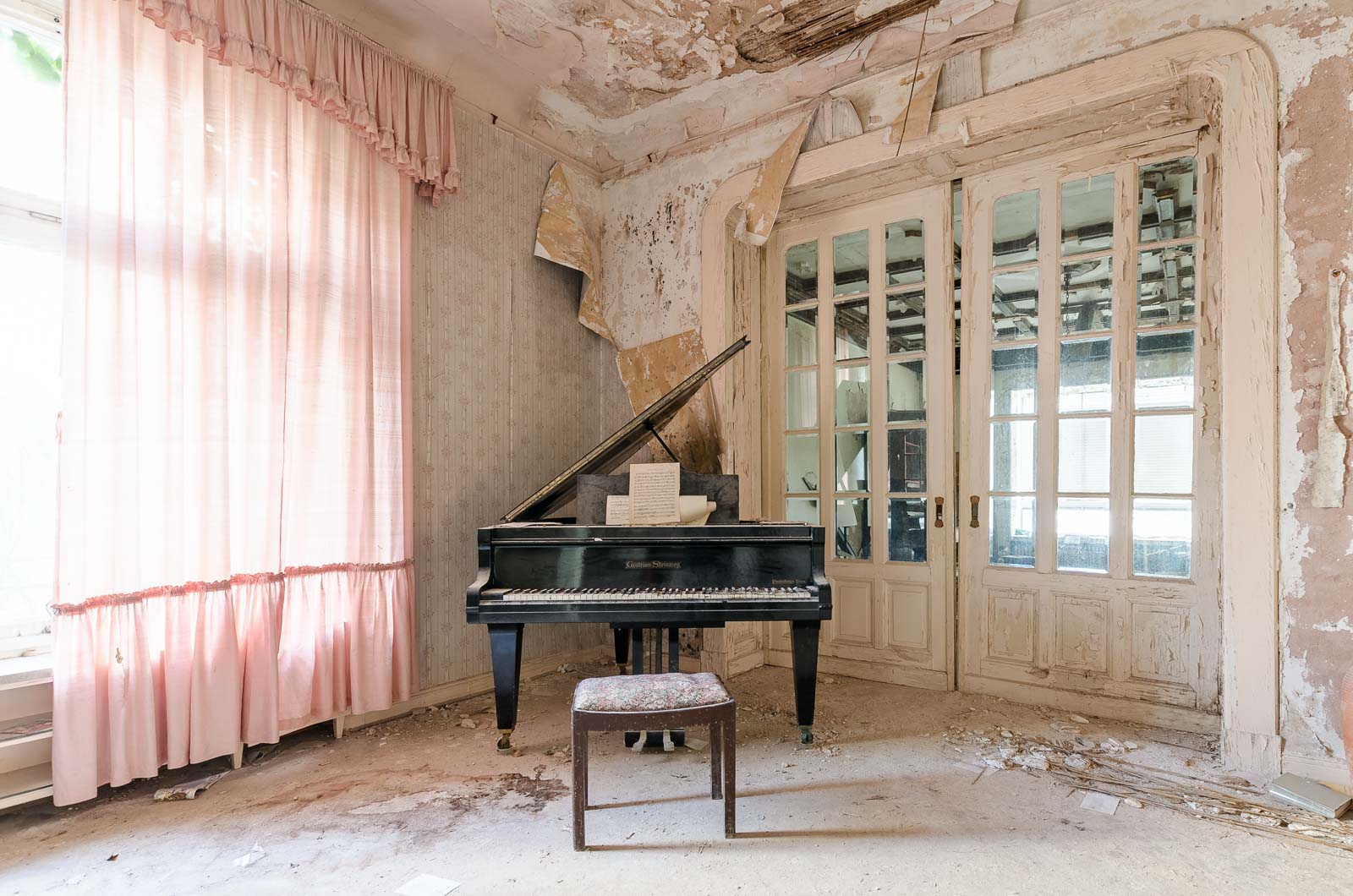 Urbex is the name given to this photography scene—an abbreviation for urban exploration, which means the discovery and photography of abandoned buildings. Vivien has explored abandoned premises with her camera all over the planet. In the Metropolitan Region, she focuses on former military bases mainly. She has, however, taken photos at other places—at the Pfaffwerk, the former sewing machine production site in Kaiserslautern, for an exhibition, for example. And she was at a former military base in Landau, which was turned into the Regional Garden Show grounds and is a residential area today. Vivien turned her passion into a profession. She works as a wedding photographer in addition to her job as a German teacher for migrants. 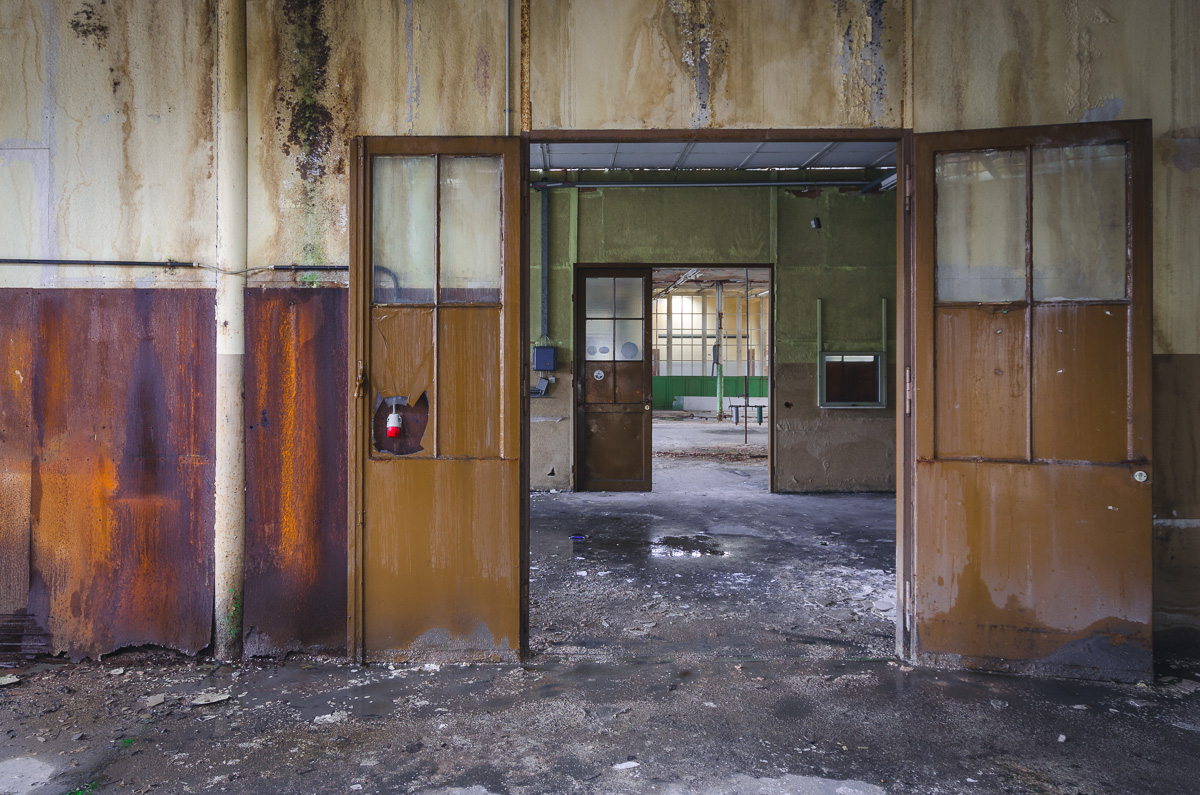 The Pfaffwerk, the former sewing machine production site in Kaiserslautern.

wo sonst: Wedding photos and places of decay… the contrast couldn’t be any greater!

Vivien: Yes, indeed, I do like contrasts! But I don’t even look at it this way. In both cases, I focus on capturing moments that are everlasting. The buildings will completely disintegrate or be torn down. My pictures will then be reminiscent of what was there once. I want to capture the atmosphere, get the ambience across just as I came across it in the respective place. I do process my images for this purpose—I intensify the contrast of light and shadow, for example. But I would never insert something that wasn’t there in reality or change something in the place for the photo.

Vivien: No. I stick to the motto of the scene: Don’t leave anything but footprints and don’t take anything but shots. You can always find a good motif if you keep your eyes peeled going through the buildings taking your time. The motives may not be obvious straight away. 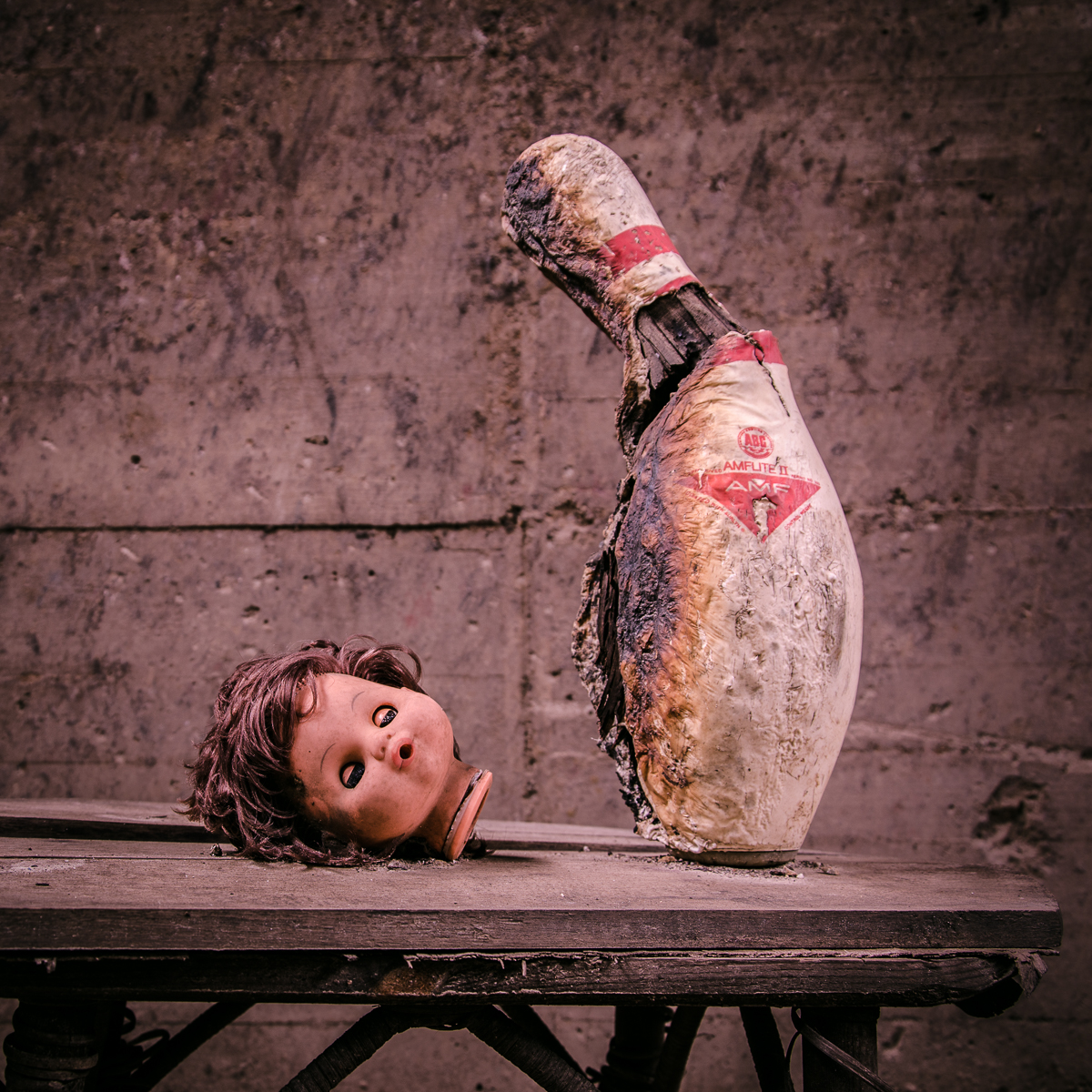 Scene from an abandoned factory in Palatinate.

Vivien walks through waist-high grass and slowly approaches a bunker. The massive sliding door is ajar. Here, north of the town of Viernheim, one bunker follows the next. It is the former ammunition depot of Lorsch. Vivien disappears in the darkness after just a few steps. She sits down on the chilly concrete ground, lets her gaze wander and waits for her eyes to adapt to the dark. Now, she takes her camera out and targets a tree trunk that somebody must have dragged here. For a couple of minutes, she just sits there motionlessly. Only the camera’s clicking echoes through the bunker from time to time.

Vivien: This here is such a motif. Many Lost-Place photographers would probably ignore the tree trunk, because it doesn’t have anything to do with the surrounding building. But it is positioned exactly where the only ray of light falls into the bunker. It looks just great! I love playing with light, patterns and lines. I don’t intend to document that I have been at this or that super-cool place.

wo sonst: So, no trophy hunting?

Vivien: There are, of course, certain places that I still want to see. But I deliberately put the camera aside every now and then and sometimes I don’t take photos at all. It’s not that the place is boring. It is rather to allow myself to imagine how people used to live or work there a long time ago, while I walk through the rooms. Even when I find old newspapers or photos, I can get lost in the place for hours. And I take along nothing else but memories. 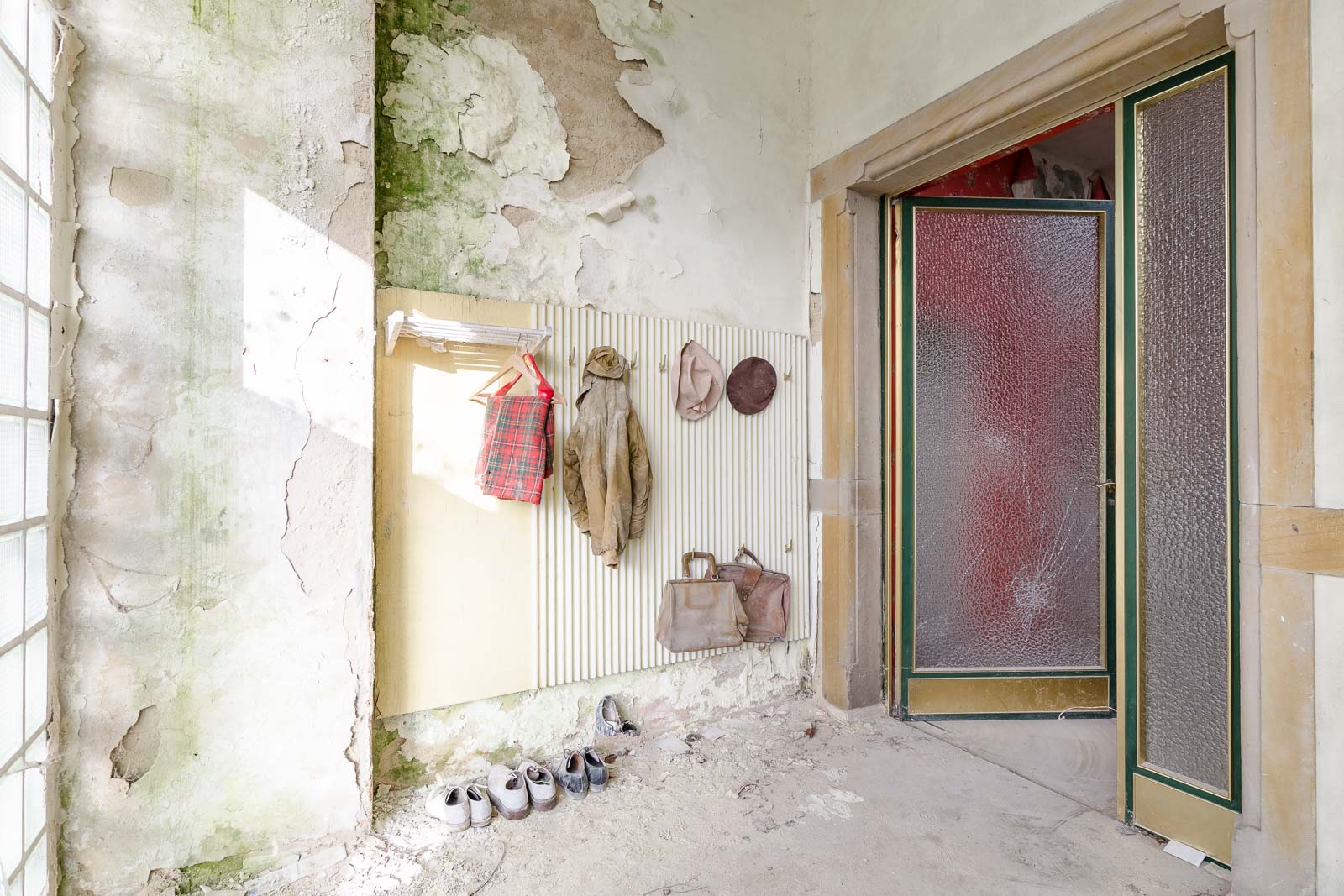 A former doctor’s surgeries in Hesse.

wo sonst: Don’t you feel like an intruder sometimes?

Vivien: No. These places have usually been abandoned long time ago and in many cases it is even unclear, who the owner is. Occasionally, I come across homeless people living in the buildings. In these cases I leave. I really don’t want to disturb anybody.

wo sonst: Usually, the places are not easy to access.

Vivien: It depends. In some cases, the proprietor agrees or even offers an official photo tour. In other cases, it is trespassing—even if nobody is bothered by it. Some places are freely accessible, like this one. In those cases, there is, however, not much to see anymore. As soon as abandoned premises are made known, there is always some vandalizing and destruction. So, the photographers usually keep them secret. After all, it is the natural decay that attracts us. 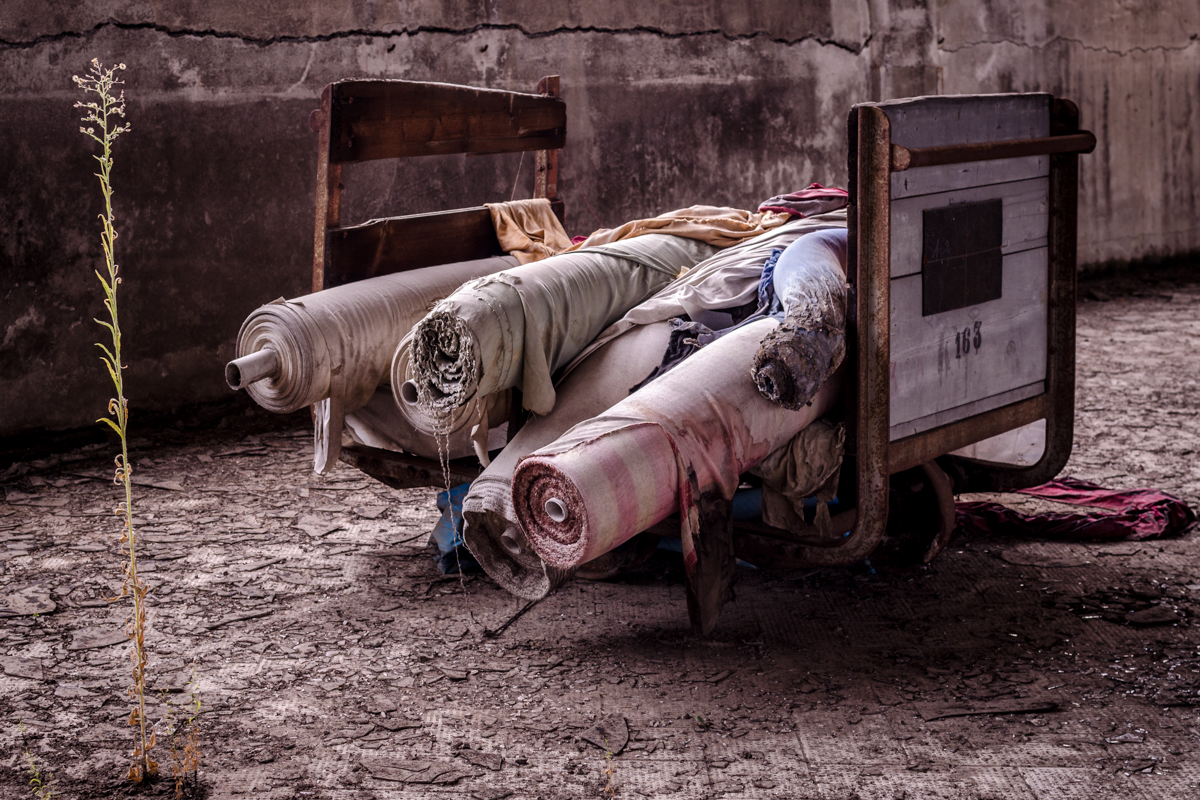 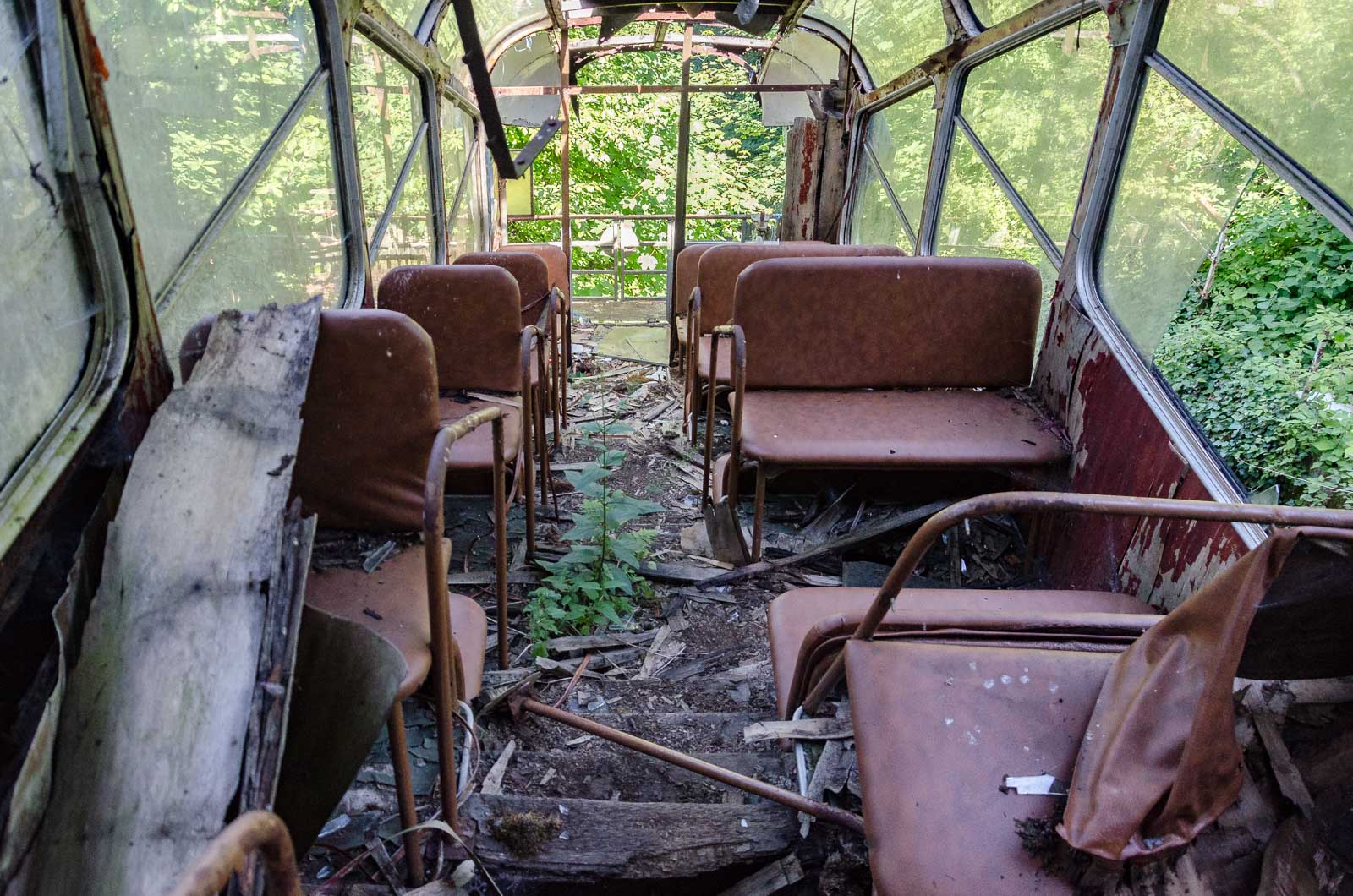 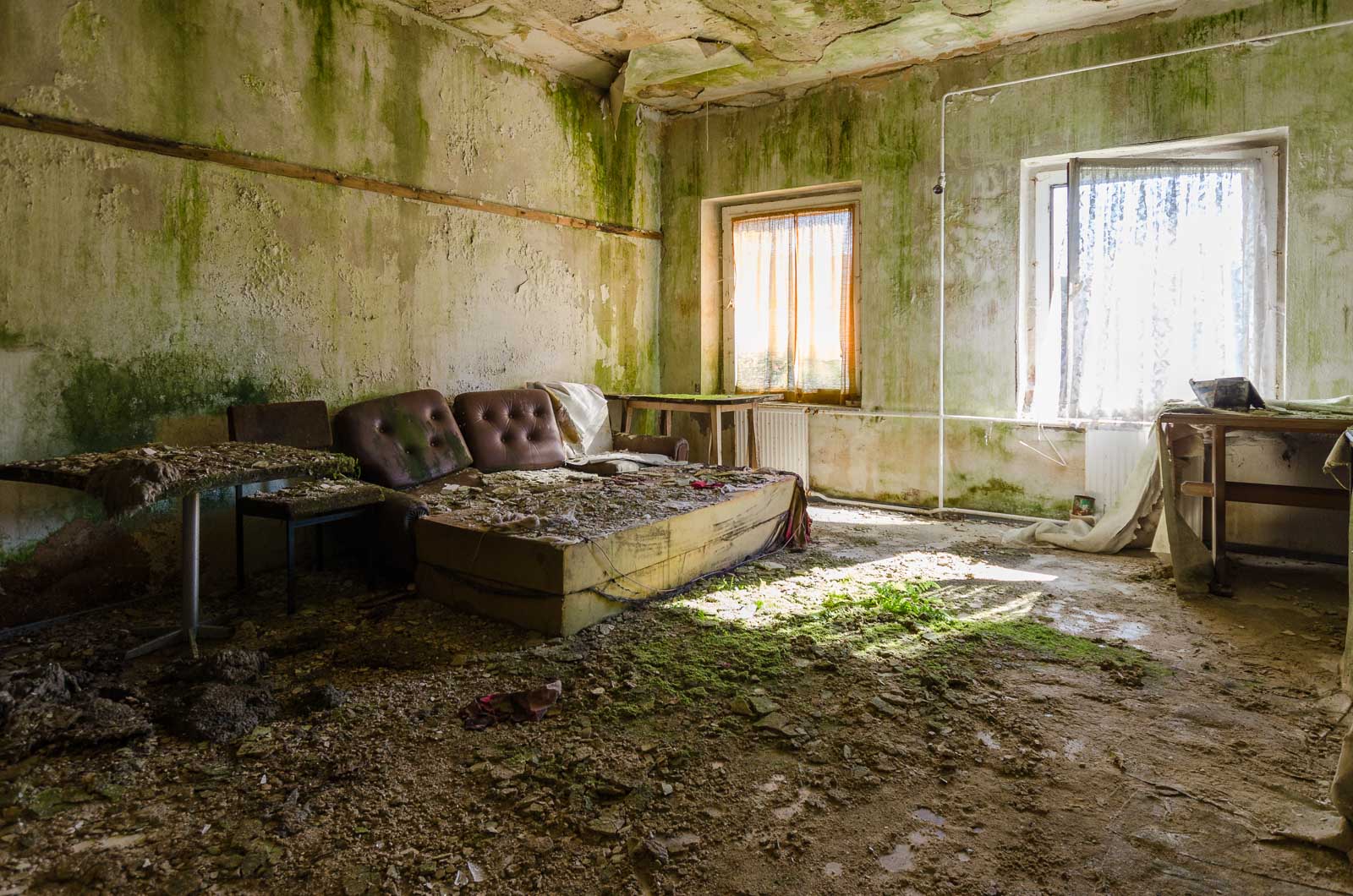 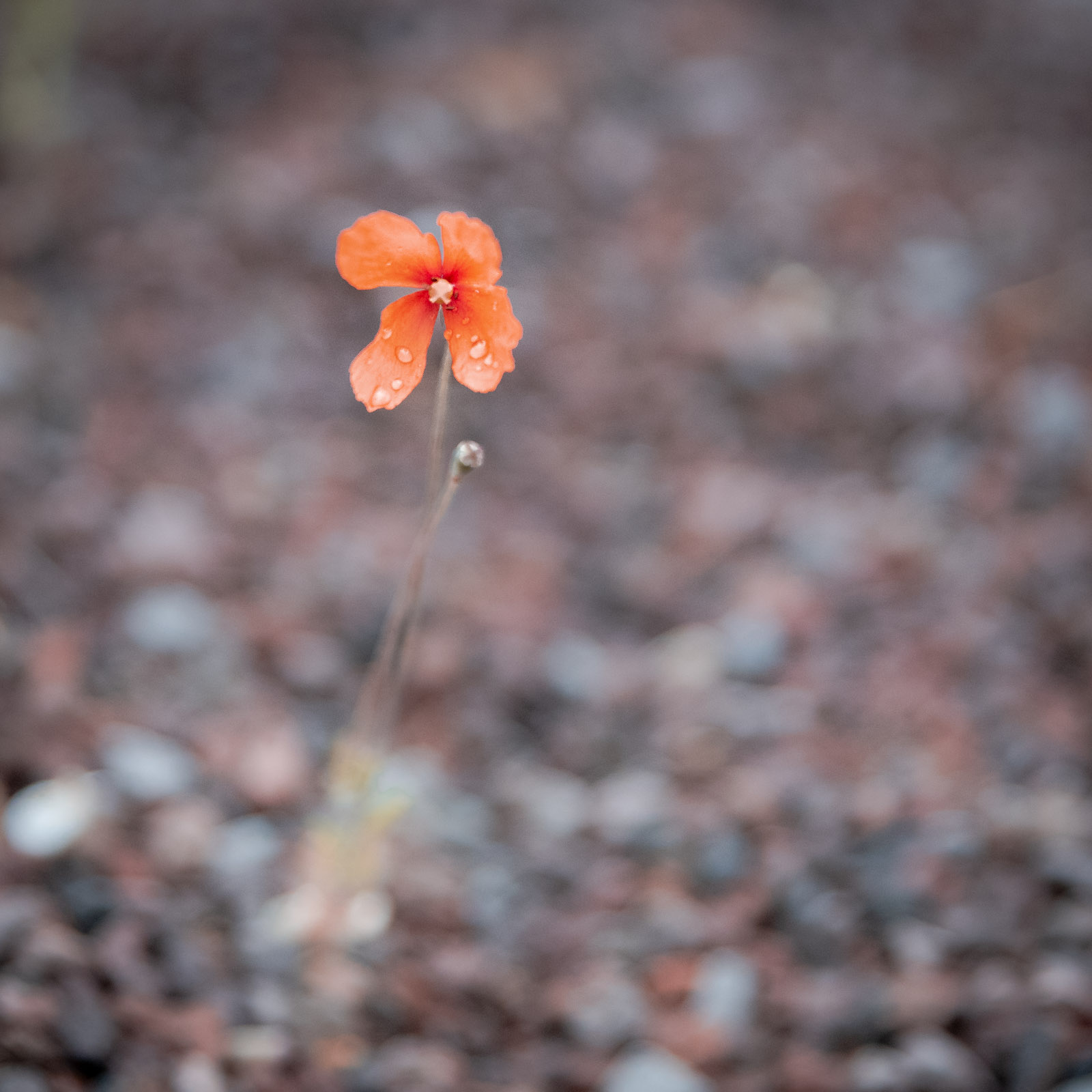 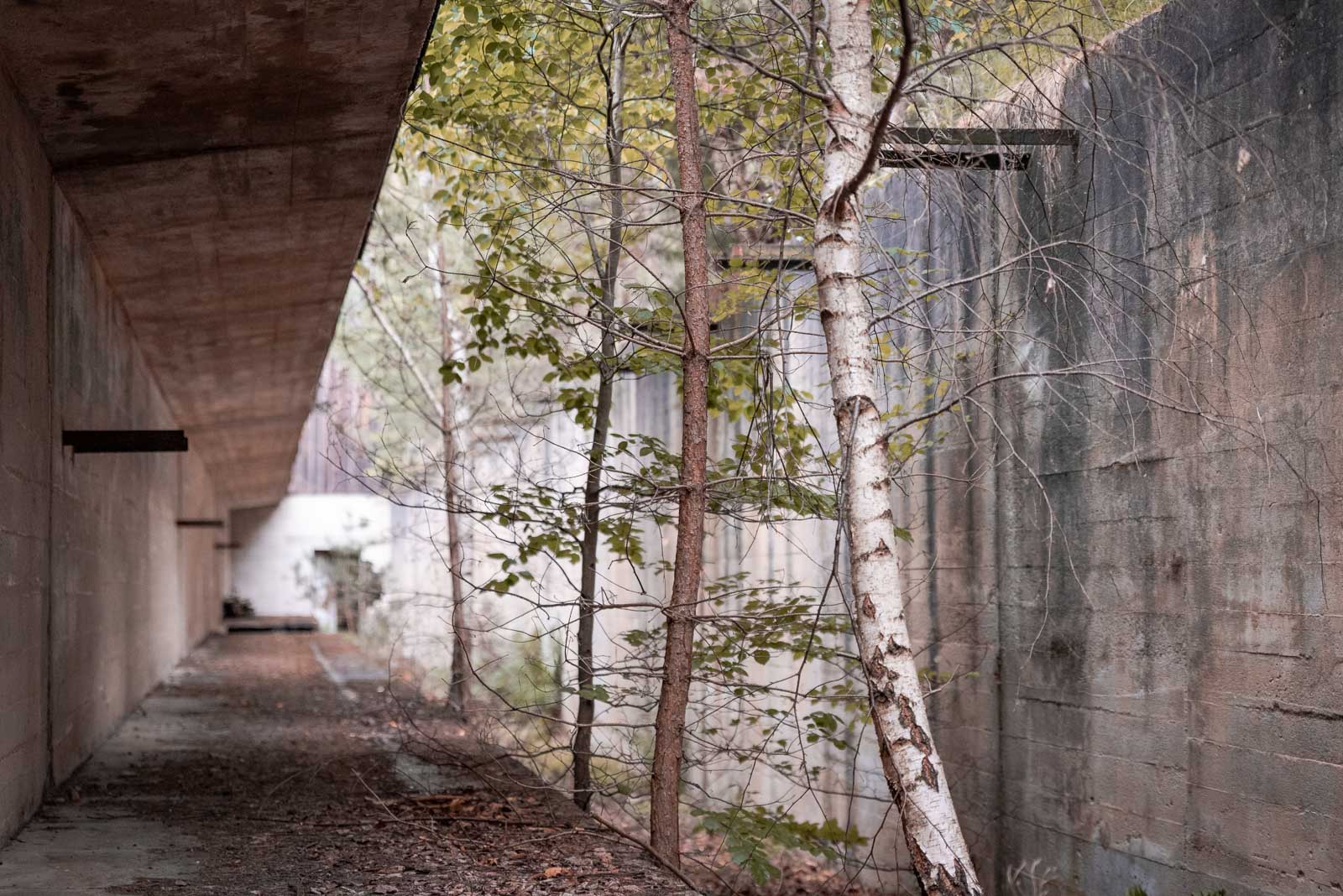 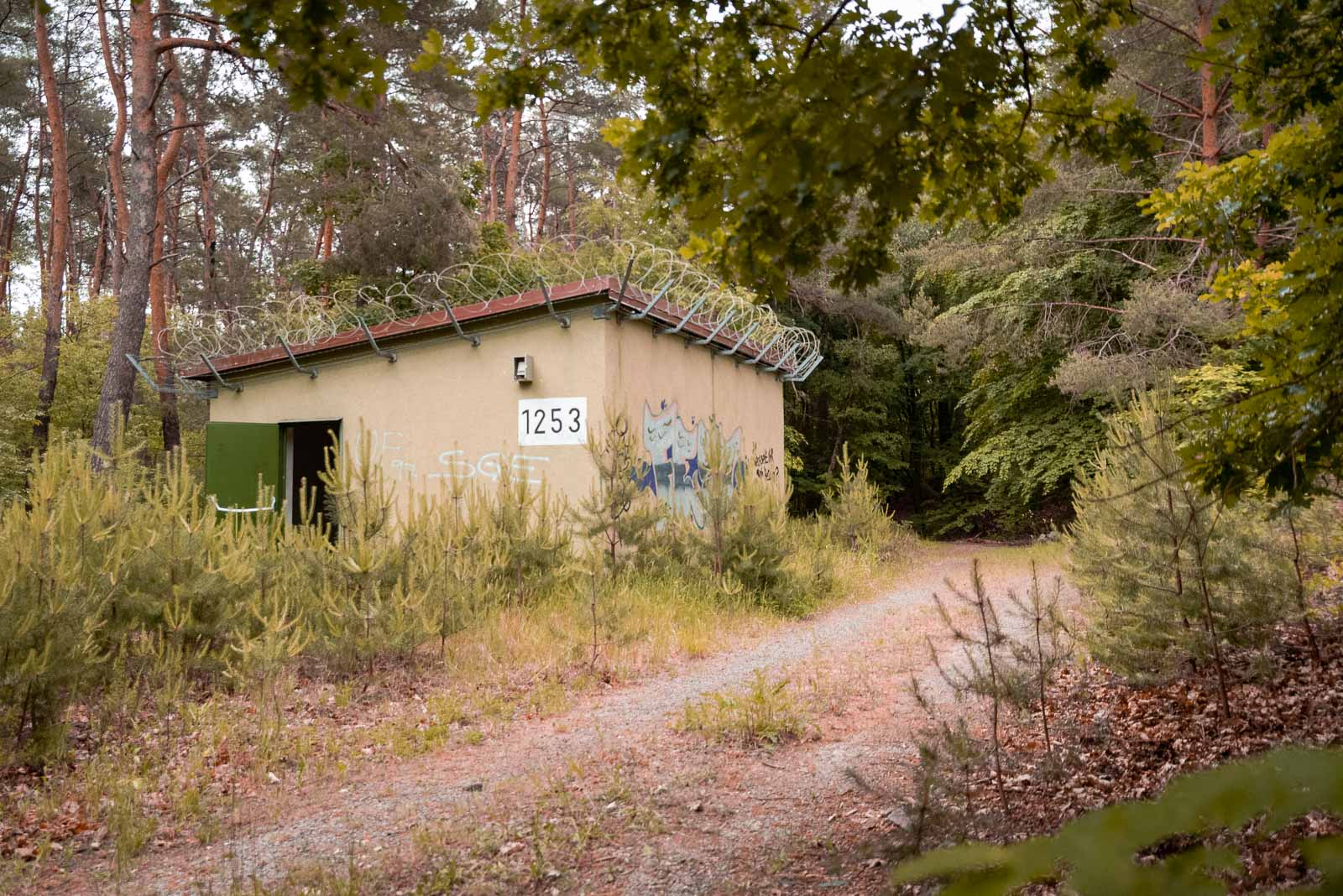 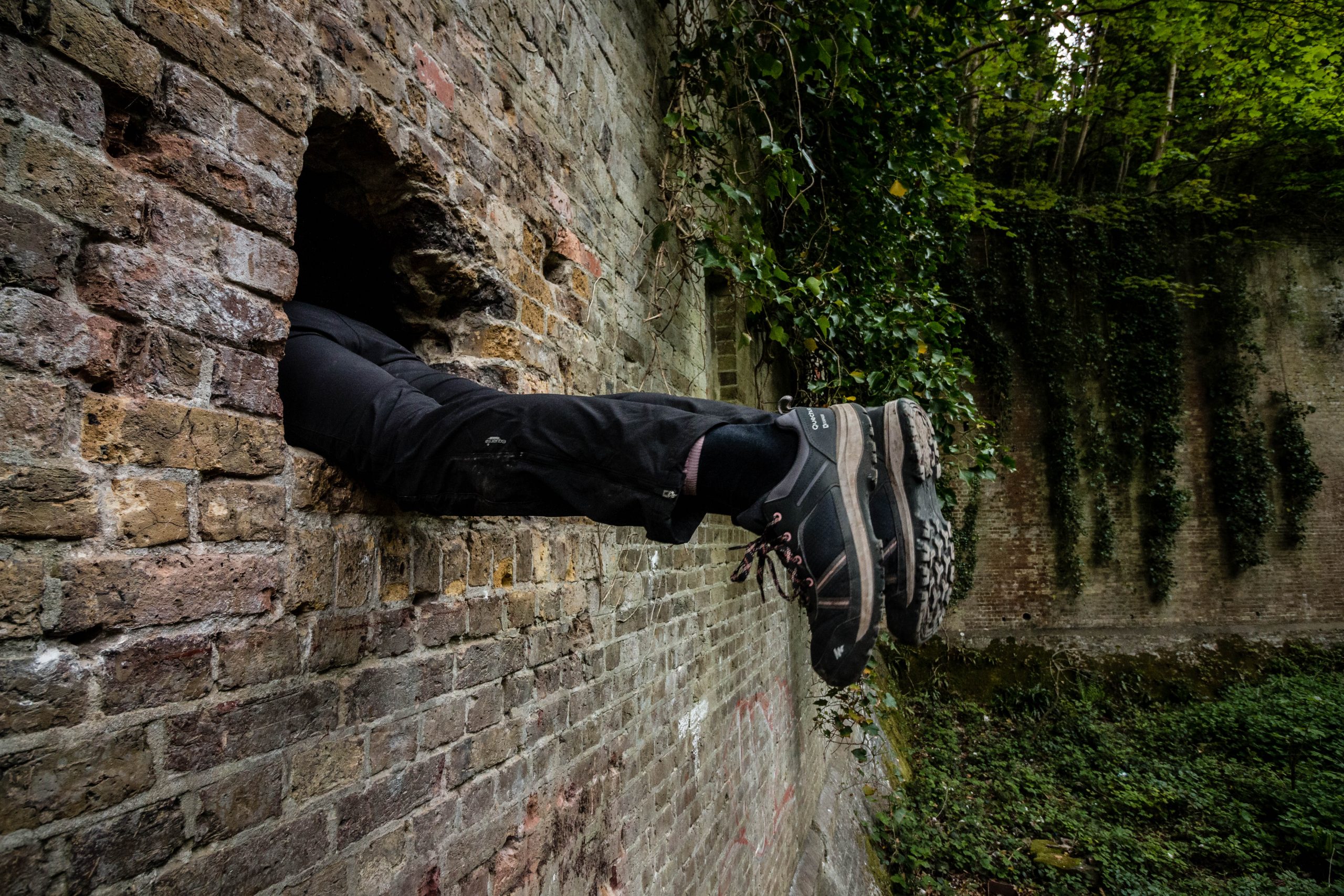