Our man on the ice

Tigers, panthers, polar bears, and eagles—they’re all bound by his whistle. Marcus Brill is the man doing the tough job as a referee of the German ice hockey league, travelling from arena to arena. A match at the SAP Arena in Mannheim is a home game for him and thus something very special. His chosen home Bad Dürkheim is only half an hour away. There, he works as a tourist manager—another tough job requiring total commitment.

The fan block roars. Deafening noise, rhythmic stamping, frenetic applauding—it is the typical madness in Mannheim as the ice hockey gladiators enter the arena. Visors pulled down over their faces and their bodies covered with massive pads, the Adler (“Eagles”) glide onto the ice. In spite of the bitter cold, the air seems to vibrate. Face-off—that’s the moment when the referee drops the puck onto the hard, white surface. Seconds later, the sticks clink like swords and Marcus Brill skates through the eye of the hurricane for three 20 minute periods, around him thousands of fans booing him mercilessly—no matter what his decision is.

“Why I do it?” Marcus Brill laughs. “Because I love ice hockey. This is my passion.” You could as well say it is his calling. Marcus Brill’s father before him had been referee for decades and this is without a doubt the reason why the son took the same path. “As a little boy I stood on the sidelines and watched my father,” Marcus Brill says. “After the matches, we always had long and heated discussions about his decisions.  One day he said: ‘You know what, why don’t you do it yourself if you know better!’ I couldn’t leave that unchallenged. Later we refereed matches together. I learned a lot from him.”

Players ceremony in front of the fans.

Marcus Brill has refereed more than fifteen hundred league matches so far—plus about fifty international matches. Being one of Germany’s top referees, he has travelled the world. Whether Korea or Russia, there is almost no corner in the world left where he has not already been on account of his passion for ice hockey. Although you might not believe it given the effort it takes: In contrast to football, it is almost impossible to make a living for an ice hockey referee with the meagre pay. “All of us do it because we love to do it. Twice a week, two full hours on the ice, that’s a tough job in addition to your main job.” 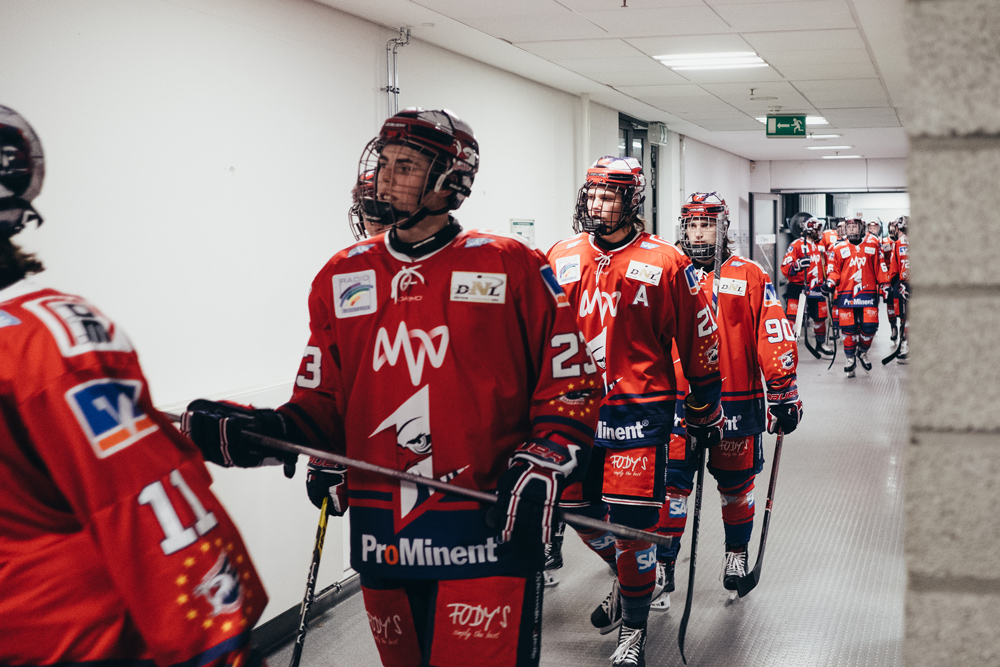 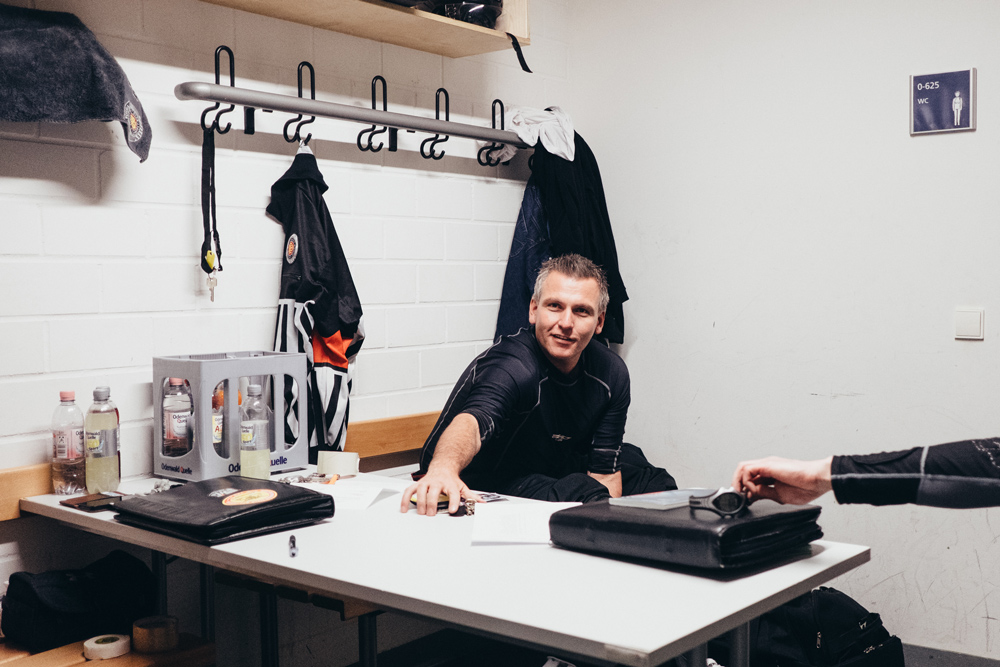 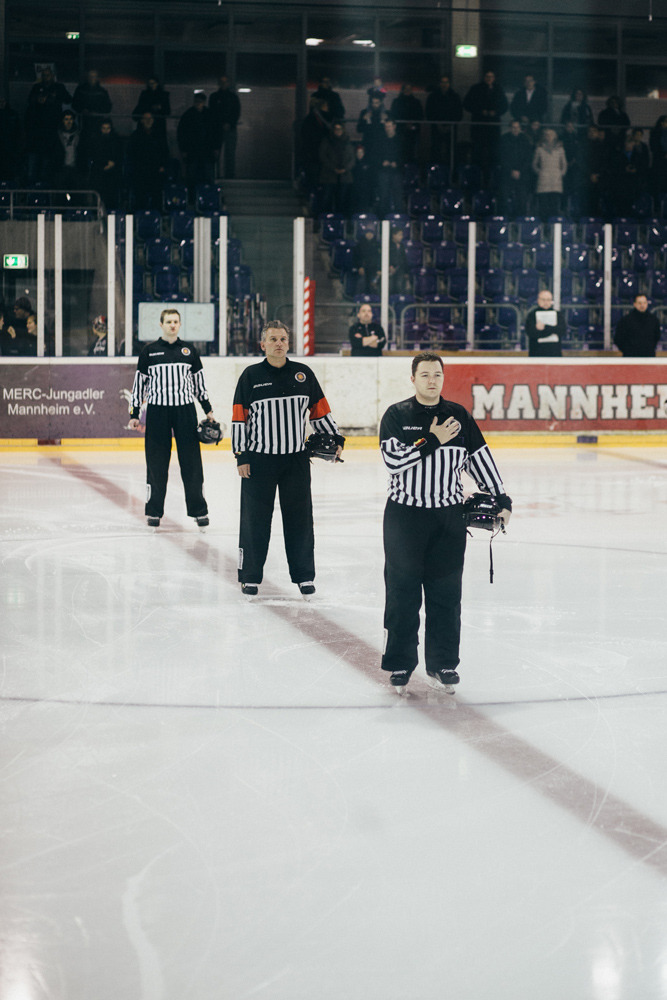 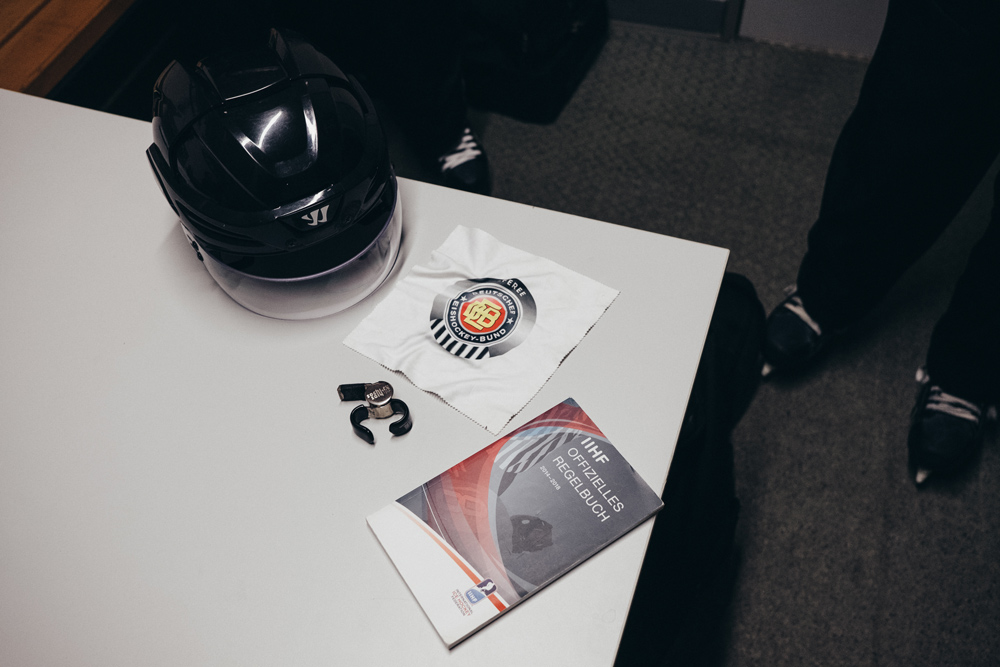 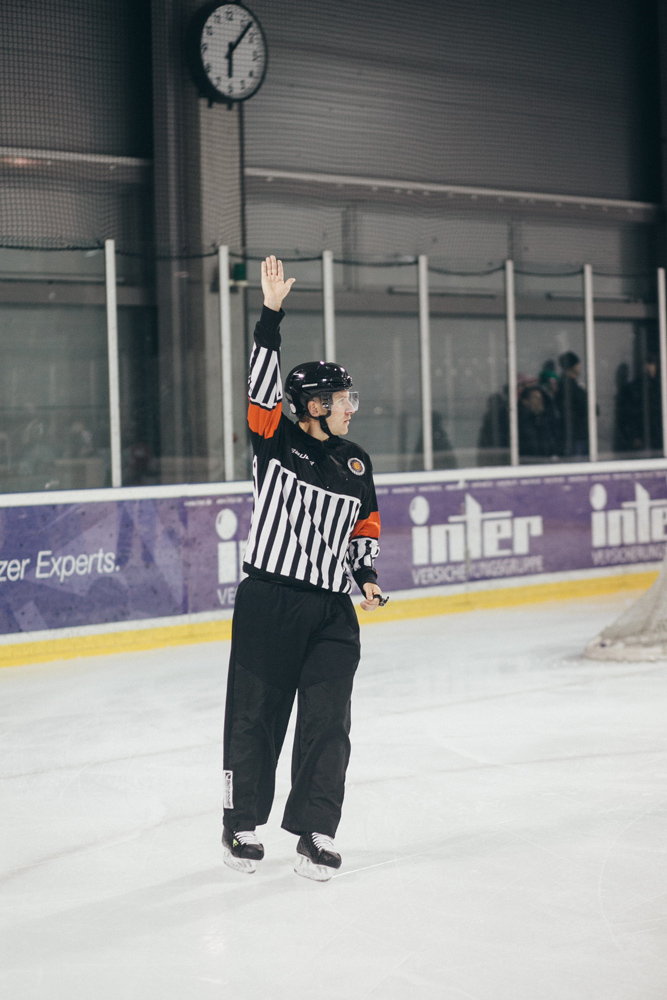 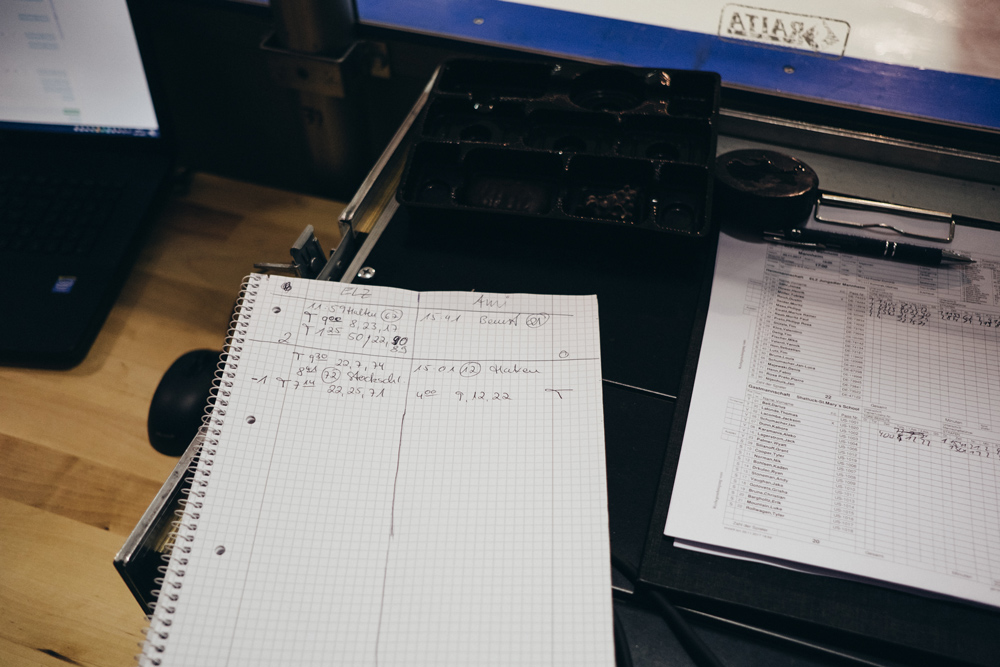 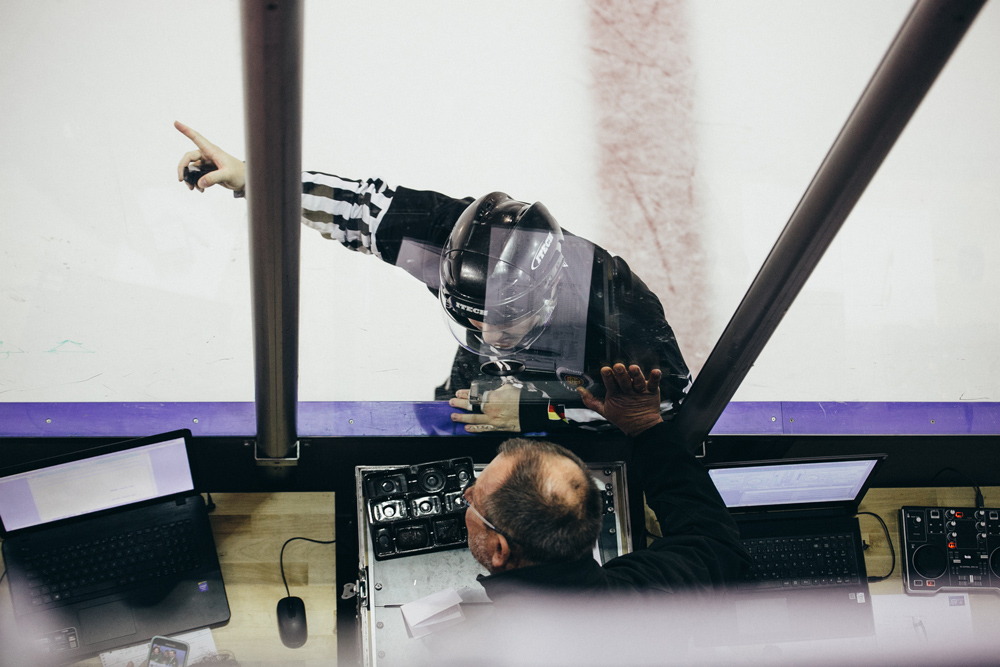 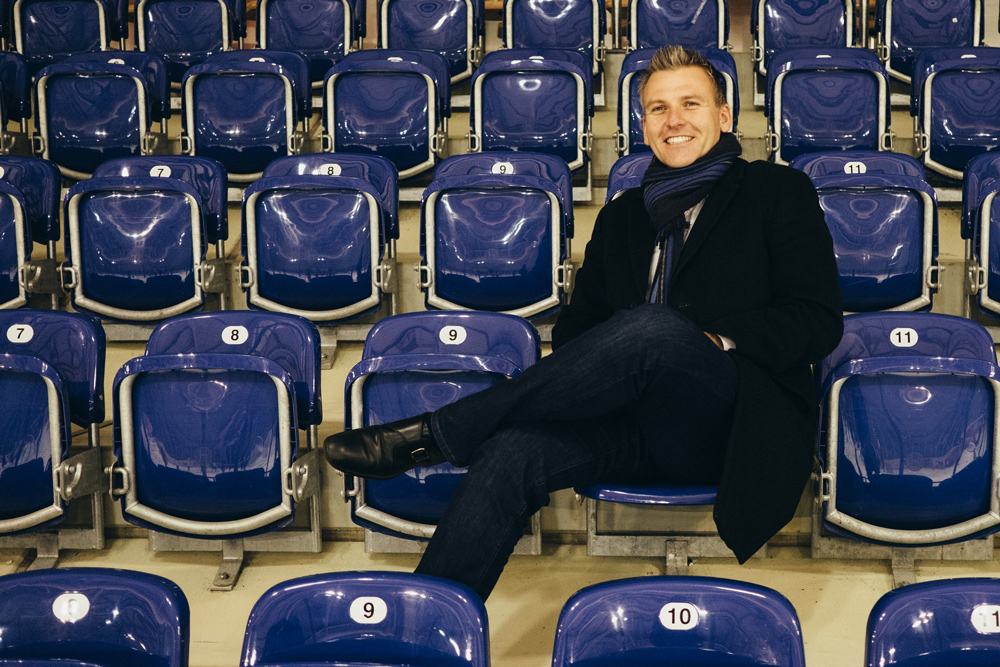 Marcus Brill’s main job is characterised by his other passion—for the spa town Bad Dürkheim in the Palatinate region. After his A-levels, the man born in the west of the Palatinate region moved to Kaiserslautern to study there. It was more or less incidentally that the young city planner ended up in Bad Dürkheim where he started working in the business development sector, promoting tourism. “When I tell people that I am responsible for major events many people think that my main job was to hang out at the Dürkheimer Wurstmarkt (“Bad Dürkheim Sausage Market”) with a dubbe (local wine glass) in my hand. But it is not that simple,” Marcus Brill says. Together with his team of sixteen staff members he takes care of the organisation and the process of the massive spectacle at which show people from all over Europe participate. The Dürkheimer Wurstmarkt is the world’s biggest wine festival and lures 650,000 people to the Palatinate town with its just 19,000 inhabitants. “It is one of the most commercial public festivals in Germany. The success of this festival is mainly due to the wine producers of Bad Dürkheim whom we have a very close collaboration with. This is a very particular kind of people. The young generation, who right now take the helm of the family businesses, pushes the quality of the wines to their limits. They are excellently trained and highly motivated people who also take new paths with regard to marketing. It is simply fun to work with them.”

“The visitors come for the game, the tourists for the events.”

One impressive example of this new cooperation is the success of the Bad Dürkheimer Wein-Nächte (“wine nights in Bad Dürkheim”). In the beginning of March, wine growers and their cooperatives invite the public to the biggest open-air wine tasting in the Palatinate region. Marcus Brill and his team illuminate the vineyards with laser lights and skybeamers, putting the most important Palatinate cultural asset into perspective. Up to 20,000 wine enthusiasts flood the vineyards at those nights.

“Tourism improves everyone’s quality of life. When I started working here, one of our main goals was to fight the vacancy level in the retail sector. By now, Bad Dürkheim has become the smallest location in Germany for many international chains. With 600,000 overnight stays and several million day visitors per day we are now also interesting for the big companies. Here, we have 120 gastronomers and 19,000 inhabitants and everyone is doing fine. I’d like to see anyone else do that and follow our lead!”

To lead Marcus Brill on, however, seems to be impossible—especially on the ice rink of the SAP Arena. Since its opening in 2005, Mannheim is the home of the seven time German ice hockey champions, the Adler Mannheim. When top matches are on, more than 13,000 fans flock to the home games of the club—and even for an old hand like Marcus Brill his assignments at his “home arena” are special events. On days like that, everything is focused on the high-speed game carried out on the 60 x 30 metre ice rink. Here, in the eye of the hurricane where the best players clash, it is German ice hockey league referee Marcus Brill’s job to organise the orderly process of the match. Feelings are running high quickly at ice hockey so that as a referee you have to settle punch-ups on a regular basis and cannot allow yourself a moment of weakness—a job that is horribly demanding but which Marcus Brill loves—because it gives him the strength for the daily challenges of the equally arduous job in the tourism business.

In the fight for the favour of the tourists and increasing numbers of overnight stays Bad Dürkheim is now well-positioned. With its central and strategically perfect location at the edge of the Haardt mountain range, it is a perfect starting point for exploring the Palatinate region on its numerous hiking and mountain-biking trails and has so much more to offer beyond the Wurstmarkt: excellent spa facilities including the spa gardens, the just recently renovated historic saline, a casino and divers eating establishments. Yet all of this is no reason for Marcus Brill to lean back, on the very contrary: “We constantly think about how we could make our town even more attractive. It is a wonderful success that the local radio station SWR 3 has performed its Comedy Festival here since 2016. From April 26 to 28, all of Germany’s top comedians appear on altogether five stages. And, of course, the glasses are filled only with the wines from Bad Dürkheim—that is a matter of honour.”

Happiness after a goal for the Adlers.

In Bad Dürkheim, there are many new things going on, which just cannot be ignored. There is the new Christmas market, which started in 2016 for the first time, the modernisation of the Brunnenhalle and the planned new construction of the thermal bath, which is due to be finished by 2021—with Marcus Brill and his team having a finger in every pie. The question arises how his two so very different fulltime jobs get together. Do they have anything in common? “There actually are several parallels, I think. In both functions I do not play the central role. The spectators come because of the match, the visitors because of the event. It is my job to create a suitable framework and ensure fair play. In sports as well as in big events it is all about the right preparation. This has to be very precise. Both are a balancing act between emotion and rationality. Many tiny details fit in to become the big picture. But the most wonderful thing about it is to be able to be a part of it.”

Today, Marcus Brill has convinced his family, too, of the beauty and the diversity of the Palatinate region. He is rarely back home in Contwig, much more frequently his family comes over to Bad Dürkheim now. And this is successful city marketing, too.