Hardly anyone in Germany nowadaysknows who the Bing brothers were. Yet their Nuremberg based company once produced toys for children all over the world. Uwe Groll has collected over 2,000 pieces from their range—from miniature roller coasters to elephantpull toys. Displayed in the Freinsheim Toy Museum, the exhibits create a world of metal, furryand childly dreams.

Uwe Groll’s favourite piece stands in a display case on the ground floor: Mr. Propellor. Looking rather stiff, almost inconspicuous and rather serious, Mr. Propellor peers through the glass pane studying the visitors. He shares his shelf with a dachshund on wheels and a handful of dolls. “I don’t dare to tell you how much he cost,” says the founder of the Freinsheim Toy Museum, as he takes out the scrawny little fellow in the red uniform and turns the square key that sticks in Mr. Propellor’s chest a few times. Whoosh! The messenger boy on roller skates dashes across the floor. A wind-up mechanism and the propeller on his back hurl him forward. Uwe manages to grab the precious piece before it collides with a chair—just in time.

This toy used to cost 5.50 marks when the Bing company carried it in its catalogue in 1910. When Uwe bought it about 100 years later, he paid 7,500 euros. “You have to be a bit crazy to do this,” he admits. He and his wife Marion opened the toy museum in the Palatinate town of Freinsheim in 2011. Full of nooks and crannies, the small building is used both as an exhibition area for Uwe’s private collection of historical toys and for a cosy café that Marion runs. It is located in the middle of Freinsheim’s beautiful old town with its numerous baroque buildings. The well-preserved town wall runs adjacent to the museum.

Uwe’s day job is as an environmental consultant. The museum is a hobby he pursues at weekends. Spread over three floors, the museum is crowded with soft toys, dolls, boxes of stone building blocks, board games, books and all kinds of toys made of tin—from pedal-cars to toy trains and miniature mines. In the café on the ground floor, the Groll’s serve ice cream sundaes and cakes. A teddy bear sits on a ledge and locomotives adorn the shelves even down here. 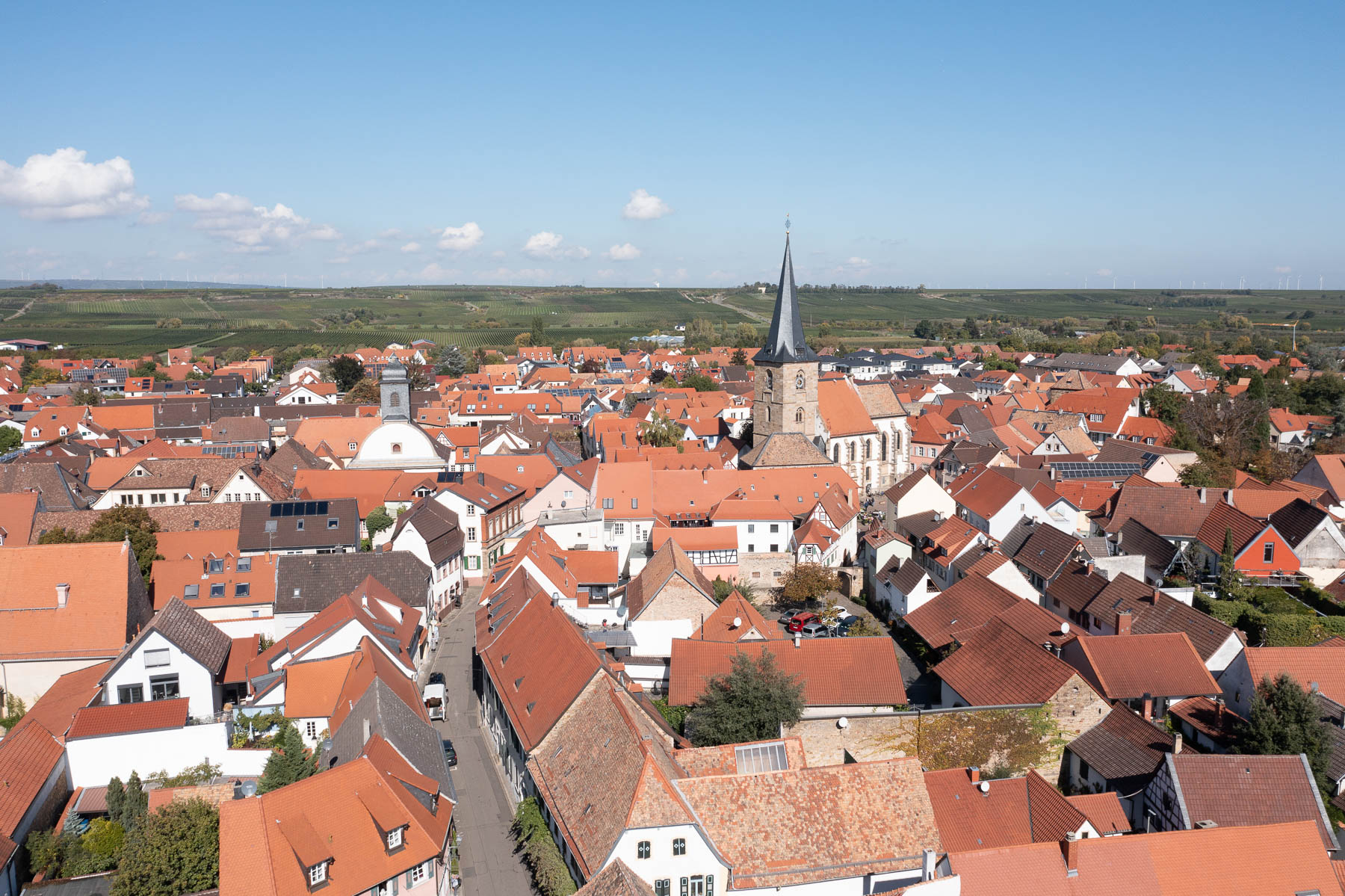 In the middle of the beautiful old town of Freinsheim… 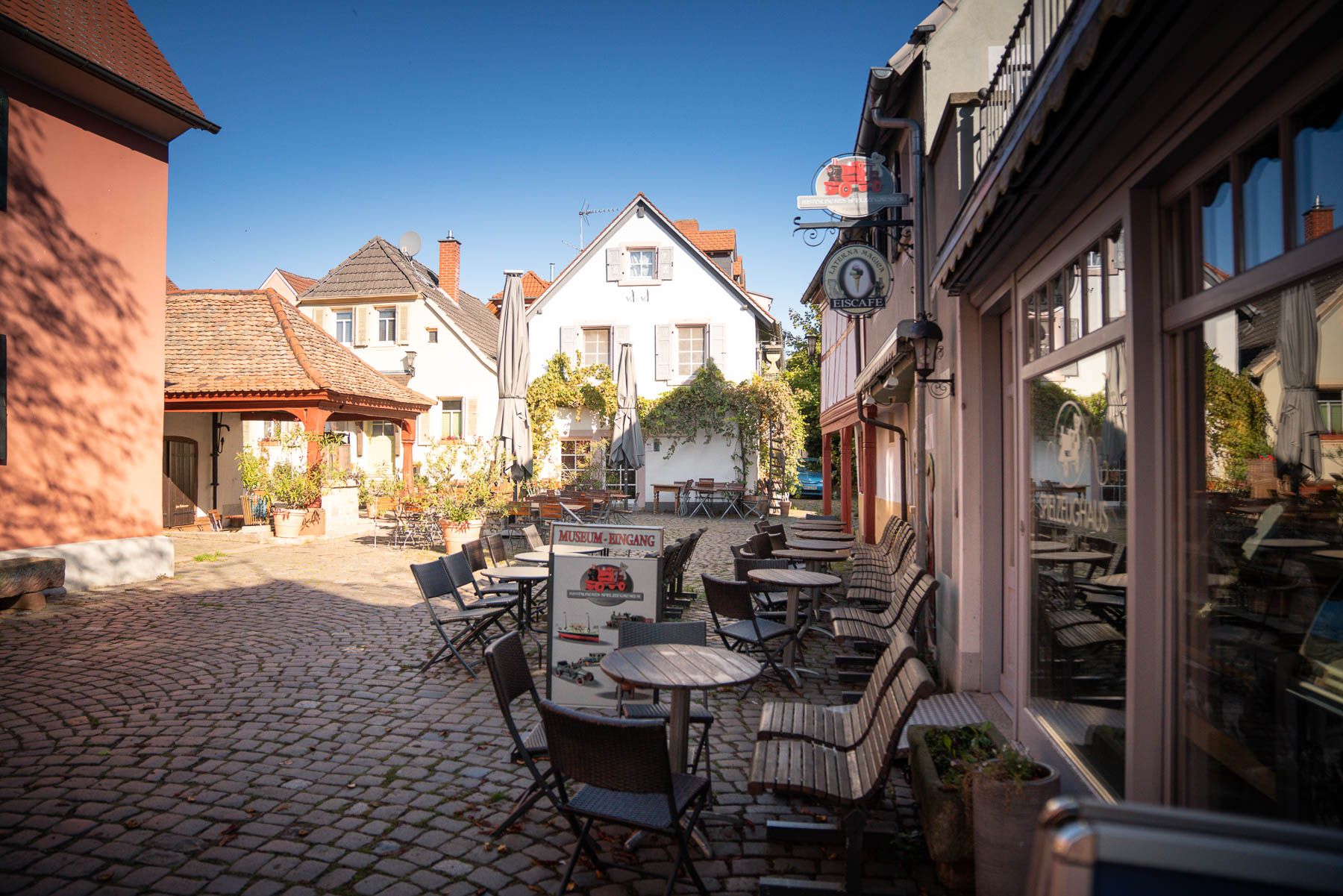 … is where the Groll couple opened their private museum in 2011. 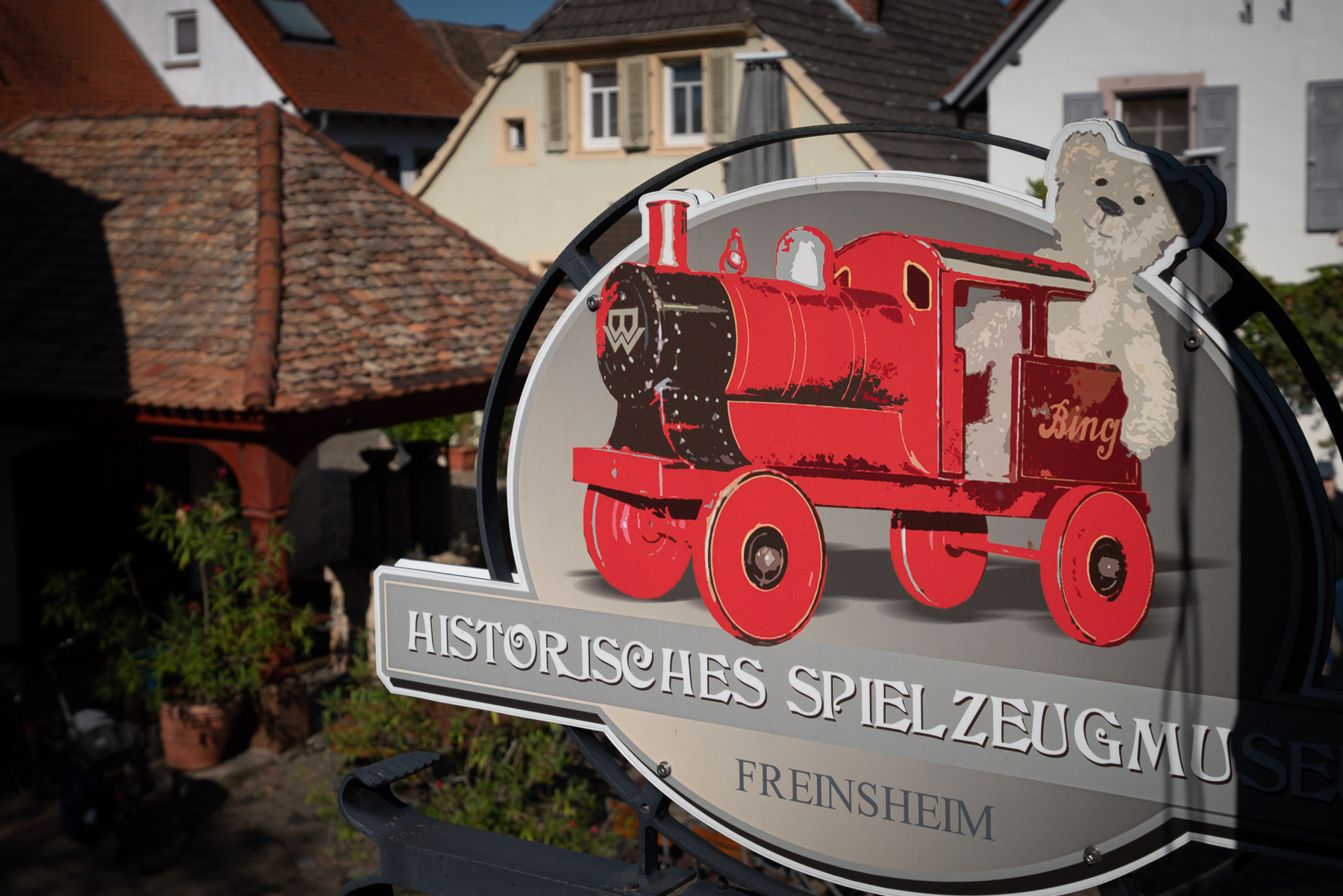 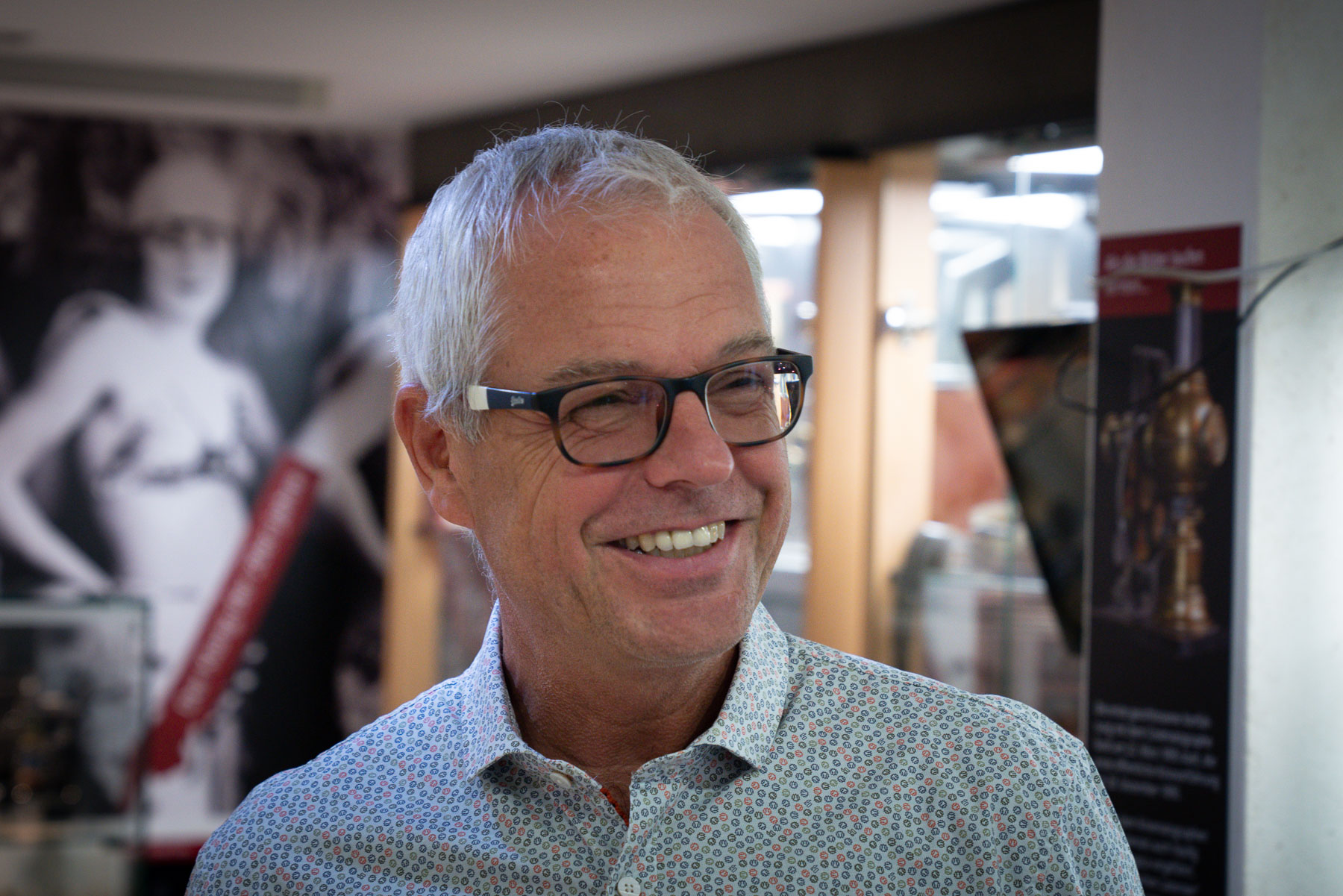 He discovered the first piece for his collection at a flea market. 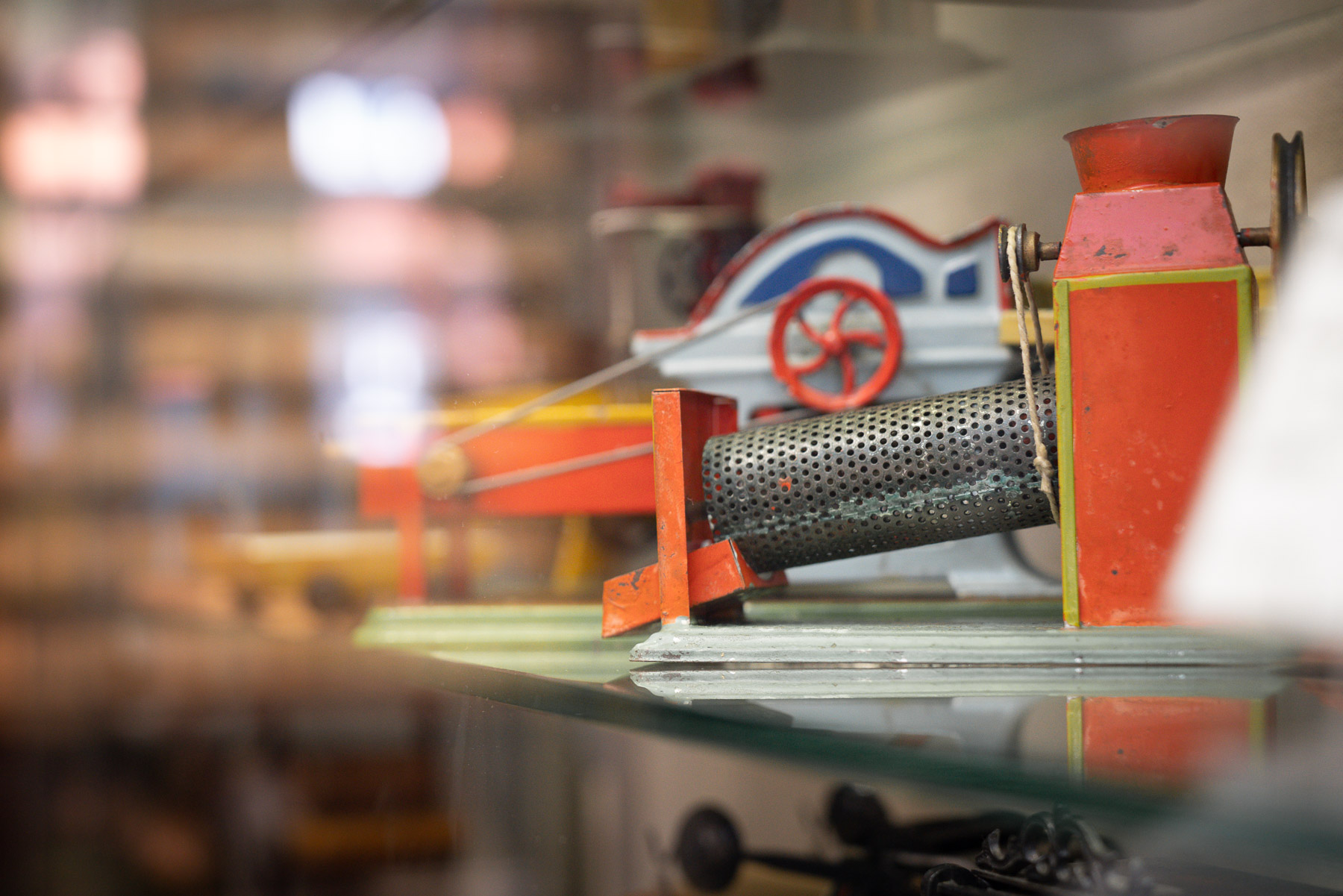 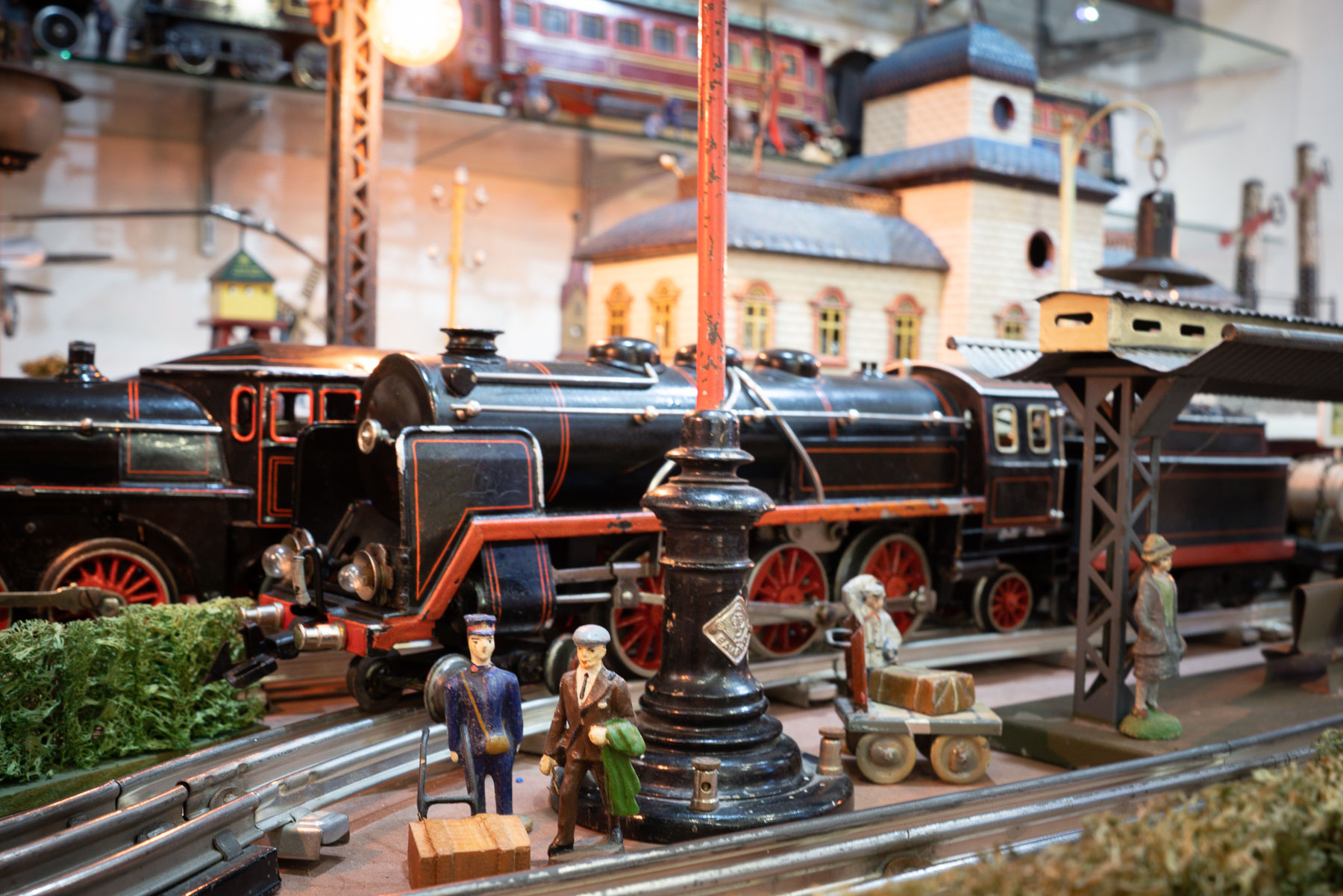 Since then, more pieces have been added year after year. 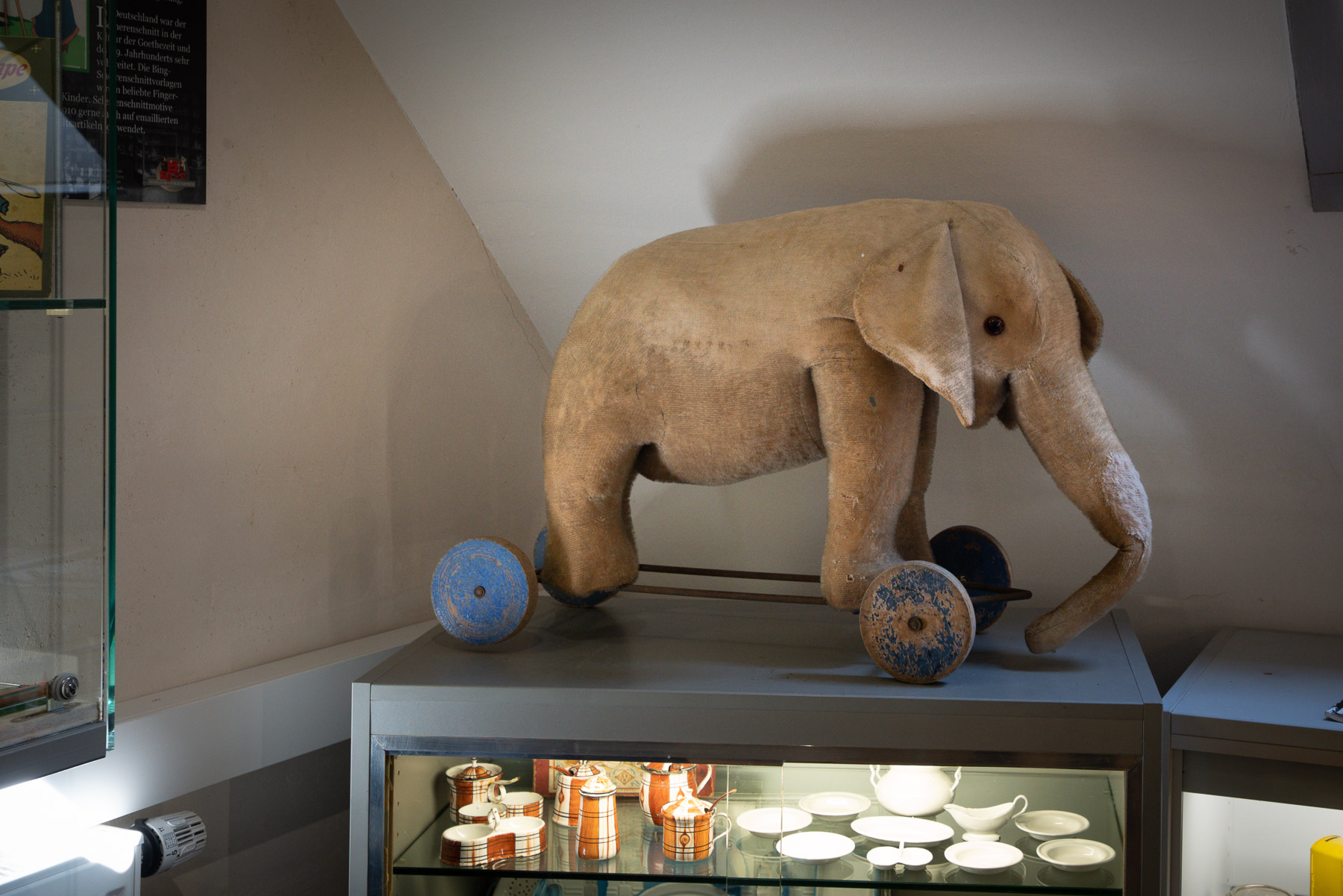 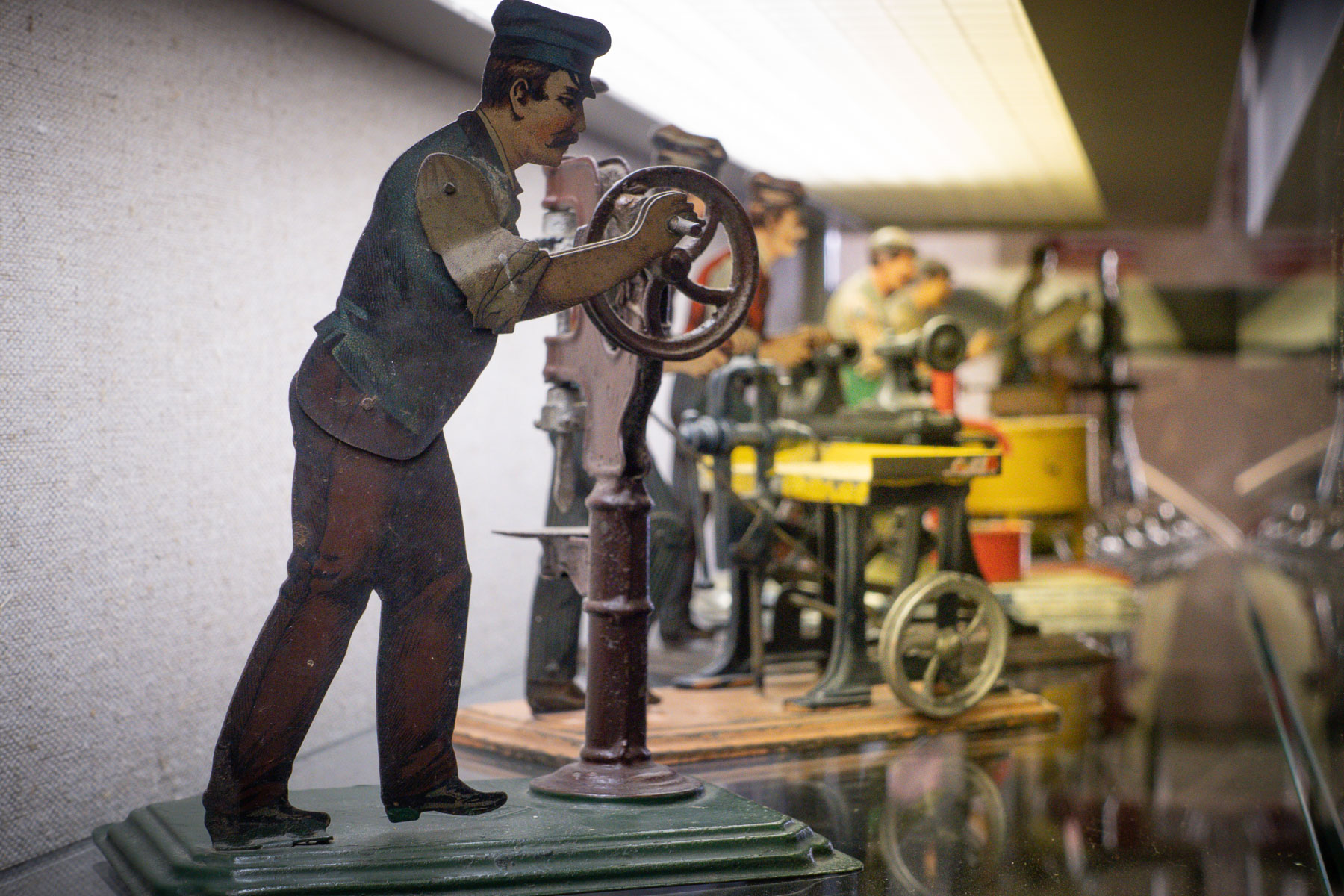 Uwe has collected over 2,000 exhibits, all of which are pieces made by the Nuremberg company. He hadn’t known anything about Bing until he discovered a red wind-up locomotive at a flea market in 1996. He liked it immediately—but 380 marks? “It was when I first heard a long lecture on Bing,” he recalls. “I now give lectures myself.” Their content can be summarised like this: The brothers Ignaz and Adolf Bing took over their father’s  company in 1864. 40 years later, a haberdashery had transformed into the largest toy manufacturer in the world (by their own account). Bing also produced household goods. The Jewish entrepreneurs did so until the global economic crisis, the complicated company structure and the upcoming National Socialism precipitated their undoing. In 1932 they finally had to close down. Hardly anyone knows their name today.

Yet the company came quite close to achieving its goal of “supplying all household goods and toy shops in the world from a single source,” Uwe explains. To achieve this, the Bings were not fussy. They copied Margarethe Steiff’s teddy bears including the ear button and advertised their own products with the words “imitation of Käthe Kruse dolls,” for example. This brought the company several court cases. But the strategy worked. While the company initially produced mainly luxury toys, its goods were later to be found in every department store. When it came to toys, Bing was actually a full-range supplier.

The red locomotive that Uwe once discovered at a flea market was finally given to him as a present by his wife. Surrounded by numerous other railways, it is now exhibited on the first floor of the museum. Another toy Uwe is particularly proud of is the Paris Metro that makes its rounds in the middle of the room—a unique piece that was probably displayed in the shop window of a department store in Paris at the beginning of the 20th century. The three carriages can be driven by a crank dynamo and then they whirl around the Eiffel Tower—an idea the collector came up with. “Operating it, children learn that a railway needs electricity.” The steam engine driven models that welcome visitors right at the museum entrance are also best experienced in action. The scenes illustrated there show everyday life as it was over 100 years ago: The cobbler mends shoes, the tailor sews while his journeyman does the ironing. The steam engine moves the tin figures bringing them to life. “It’s like a miniature open-air museum,” Uwe says watching the smith hammering away.

Many of the Bing toys can be set in motion by steam, electricity or a clockwork motor. However, Uwe can demonstrate only a small part of these wonderous objects in the museum. That’s why he invites people to the Von-Busch-Hof location once a year, always in autumn, for a museum festival. It smells of spirit there and the steam engines whistle. Some 600 of the 4,000 guests that the toy museum used to welcome every year before the global coronavirus pandemic hit were coming particularly for this event, among them many other collectors. Uwe enjoys it most when grandparents come with their grandchildren: “The little ones ask whatever they have in mind, and grandma and grandpa can really offer something! That’s great fun.”

The toy museum has become famous internationally. One day, the descendants of the Bing brothers came across Uwe’s museum. The granddaughter of the company founder visited the house five years ago. As a 17-year-old, she had escaped on a Kindertransport to England (where she lived until her death). They both had tears in their eyes when she told the collector amidst the Bing toys that she felt reconciled with Germany on her visit to the museum.

“Since then, I feel the historical mission even more,” says Uwe, who wants to preserve the memory of the Bing brothers—not least because this doesn’t take place in their hometown of Nuremberg. For him, the exhibits are a window into the past and testify to how much everything technical excited people at the beginning of the 20th century. “The toys themselves were never fanciful inventions, but rather inspired by the world of the adults,” like the miniature suspension railway, the magic lantern or the (functioning) miniature iron and cooker for mother dolls.

Dangerous? Sure, but quite typical back then. “The steam engines were heated with spirit,” Uwe recalls. When he started one up for the first time, he was quite nervous. “I was afraid of burning myself or that the boiler would explode. But this fear subsides the more you understand the technology.” The Bing company even sold X-ray tubes. Uwe would love to have one for his collection. He just wouldn’t demonstrate this special piece then. 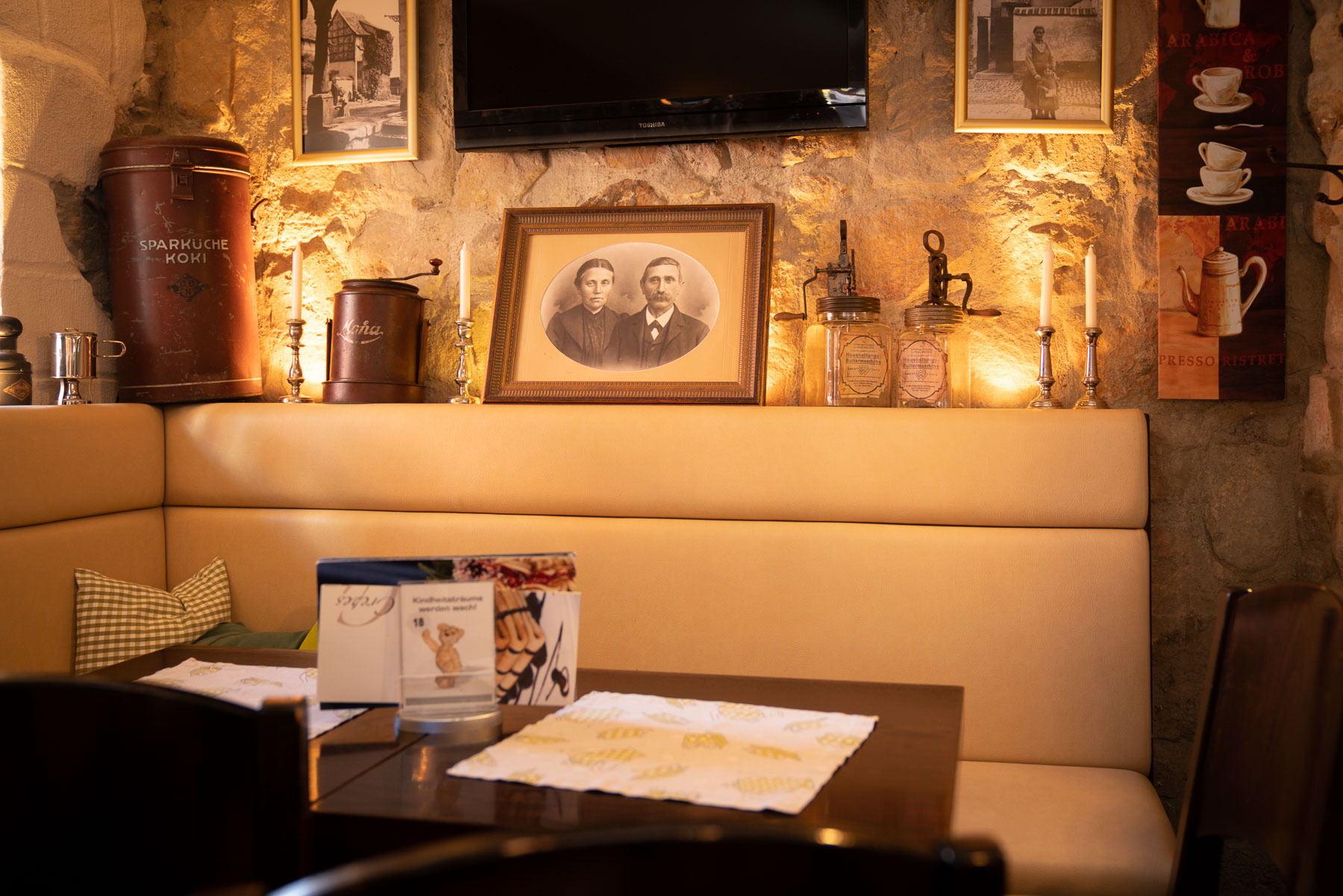 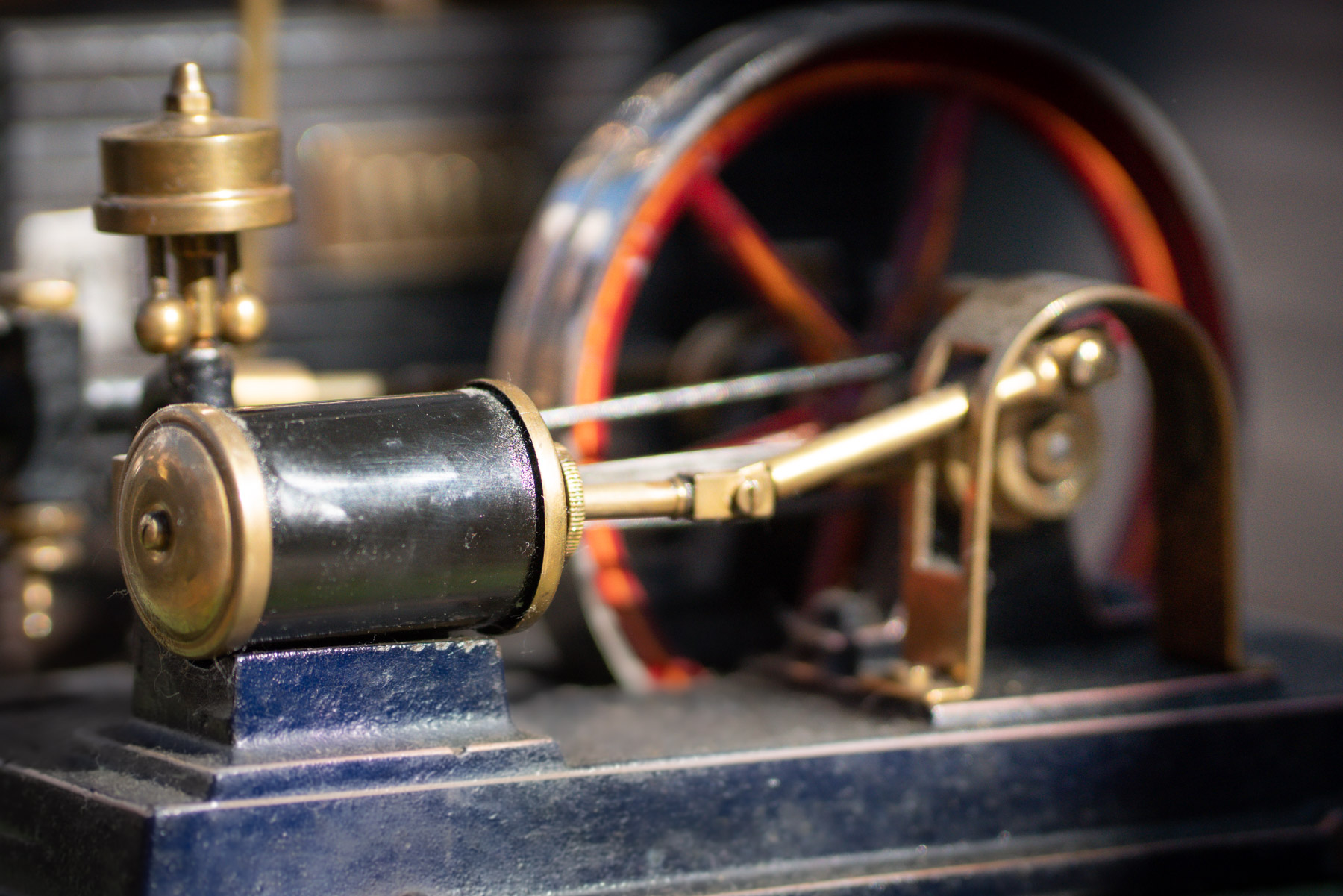 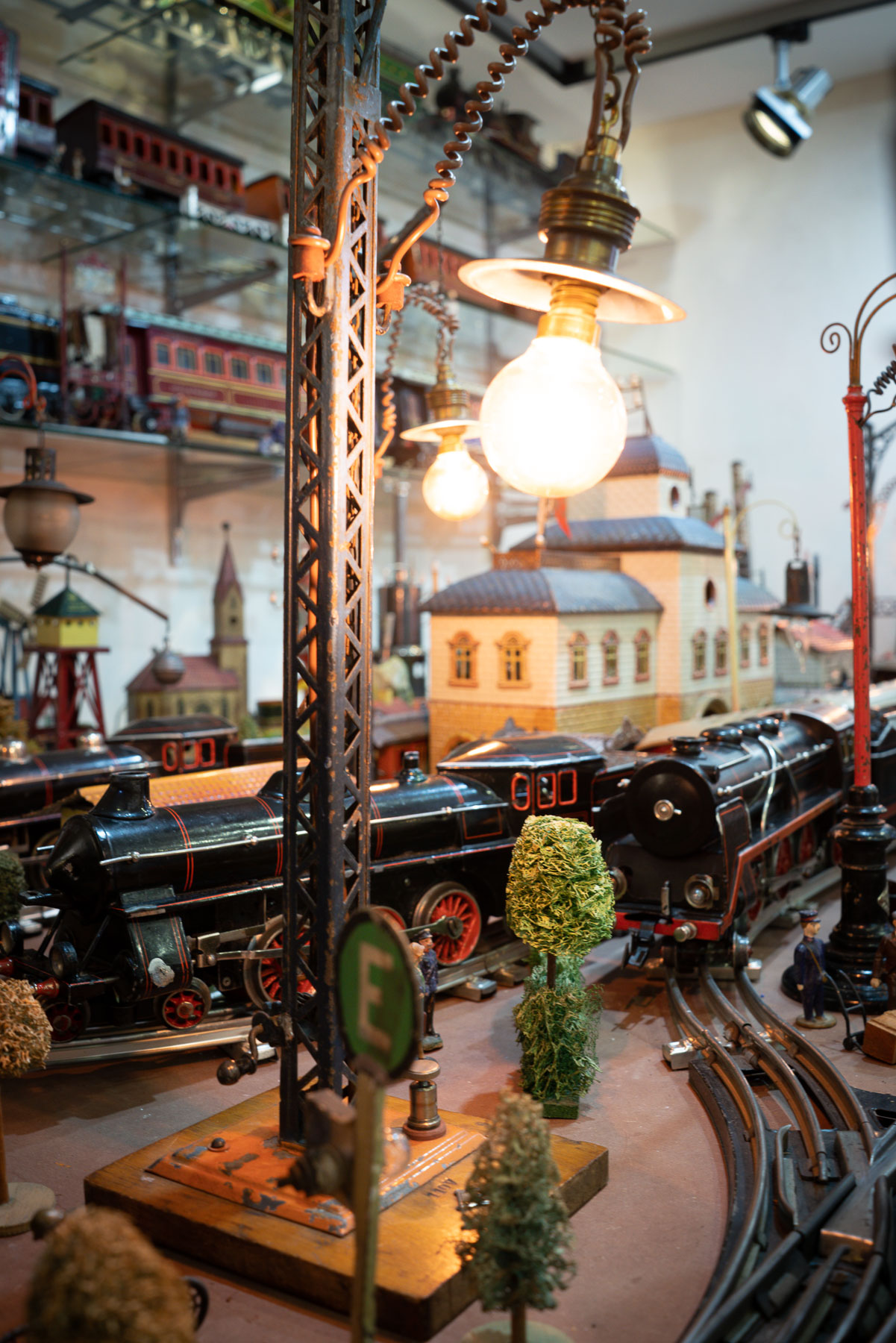 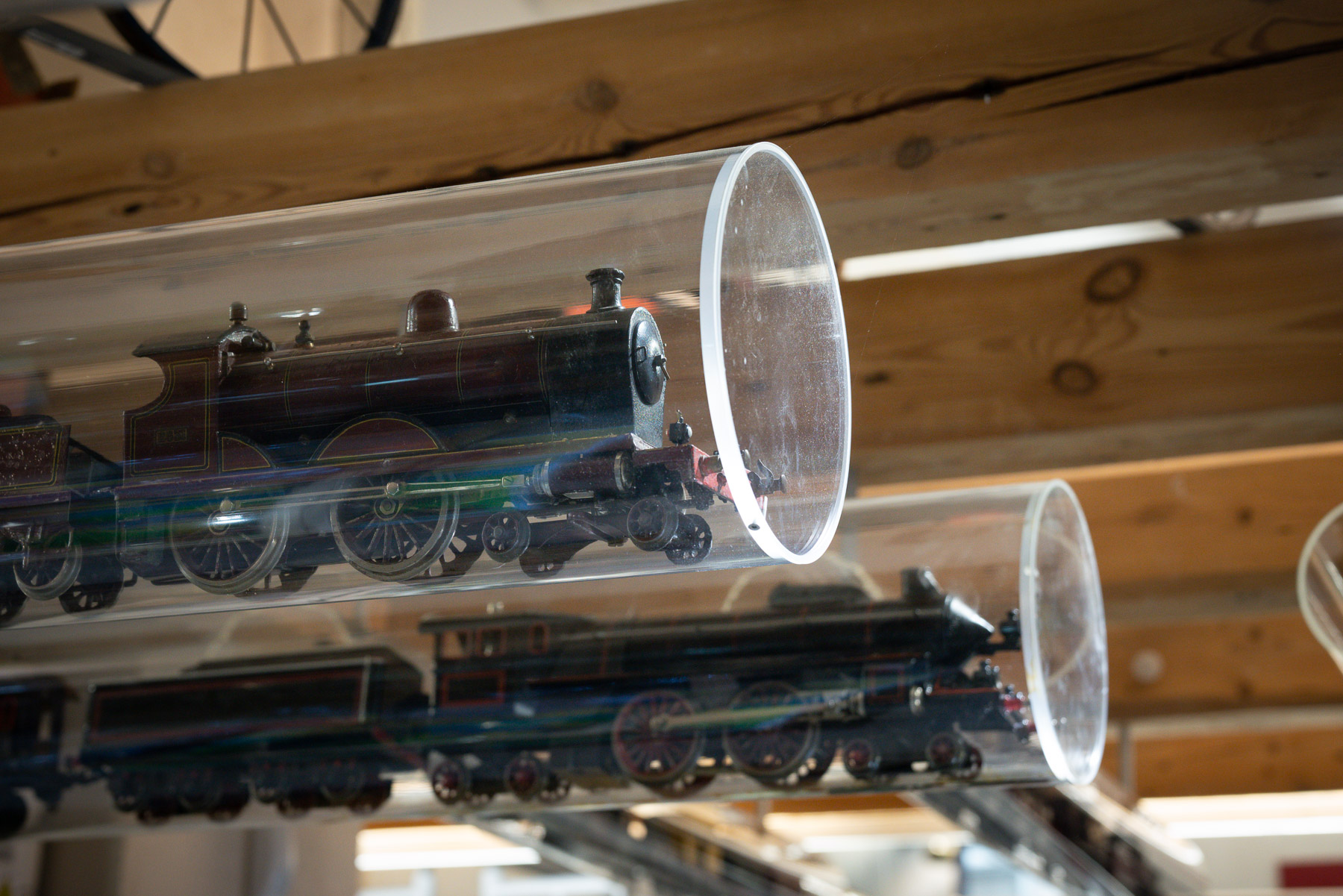 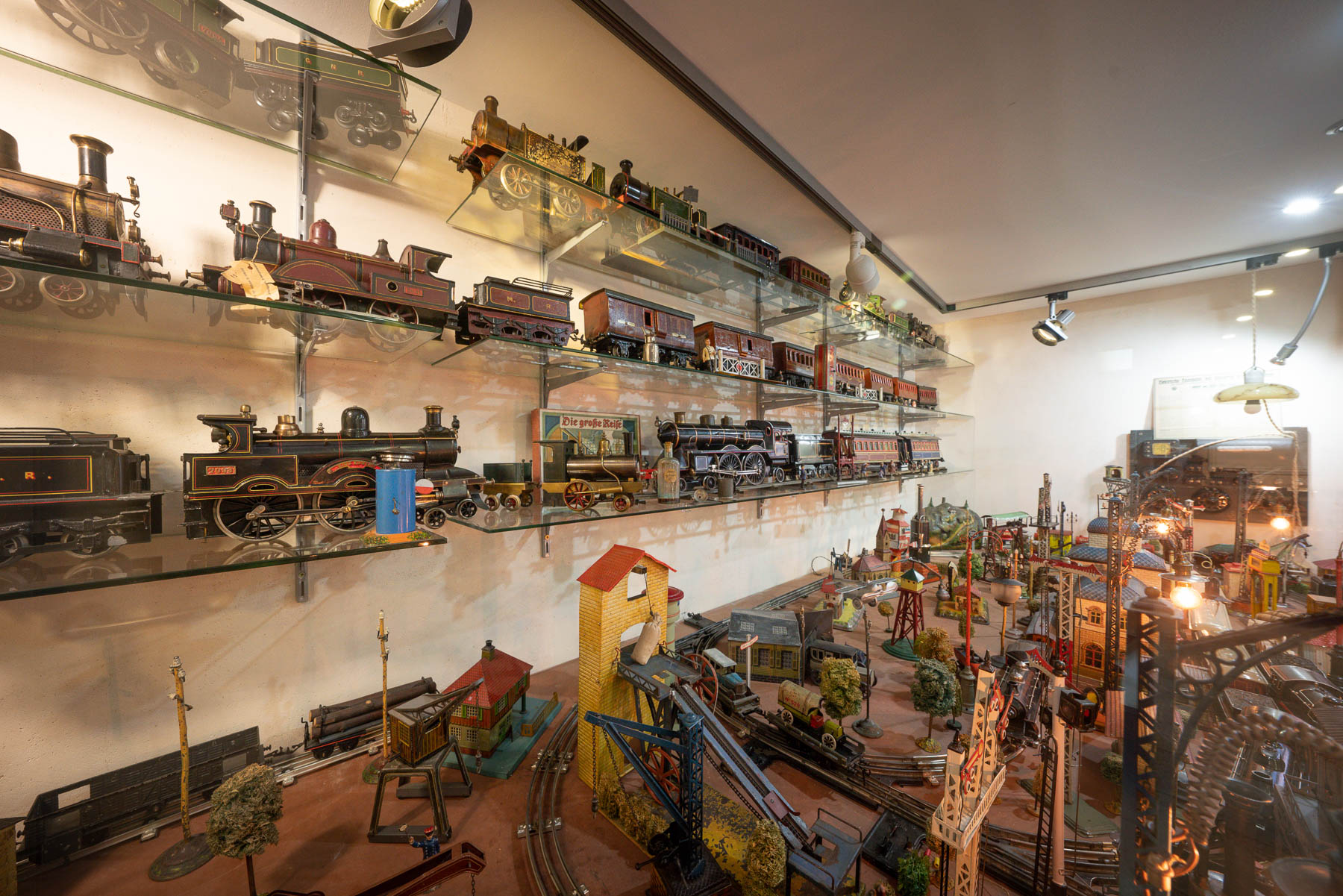 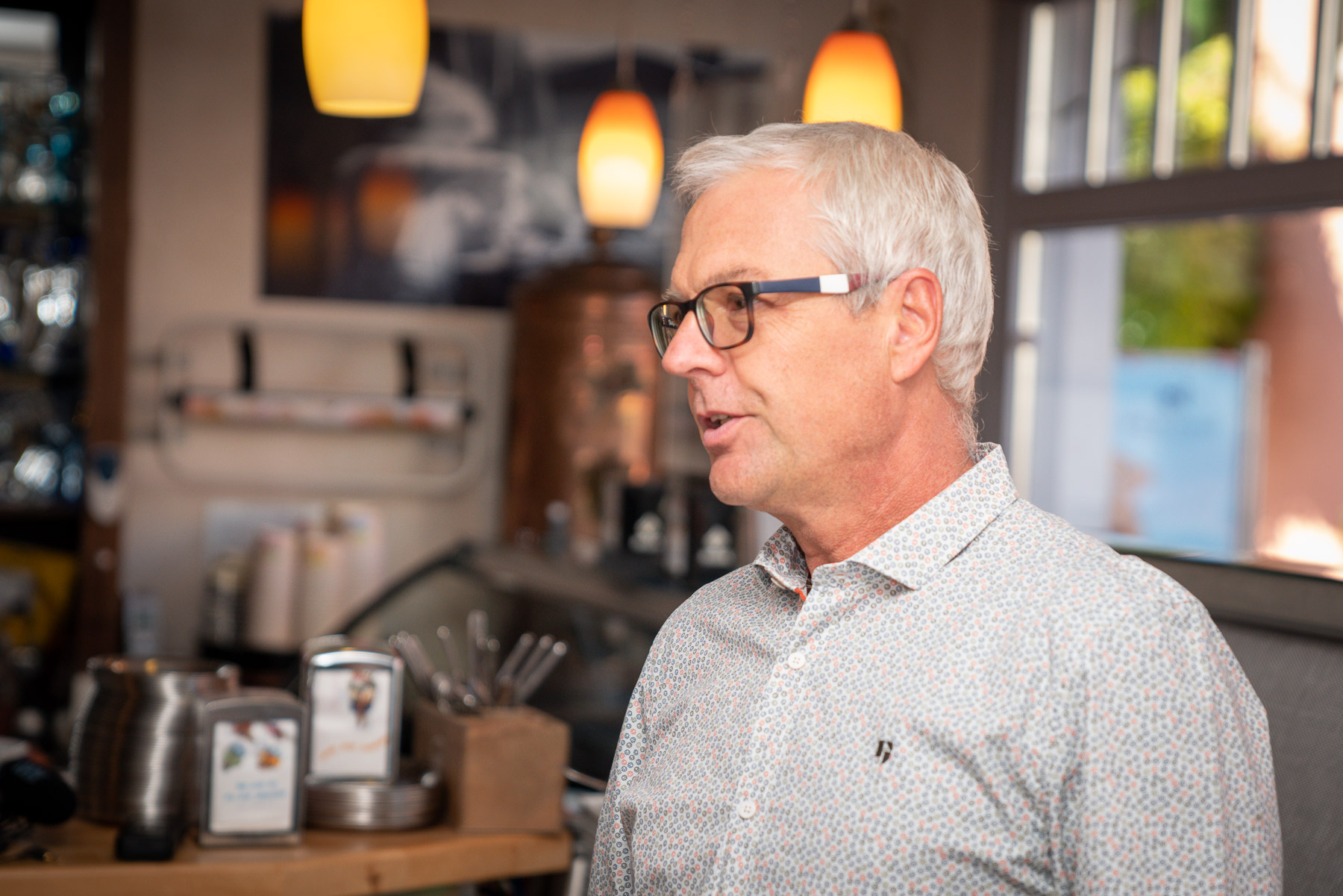 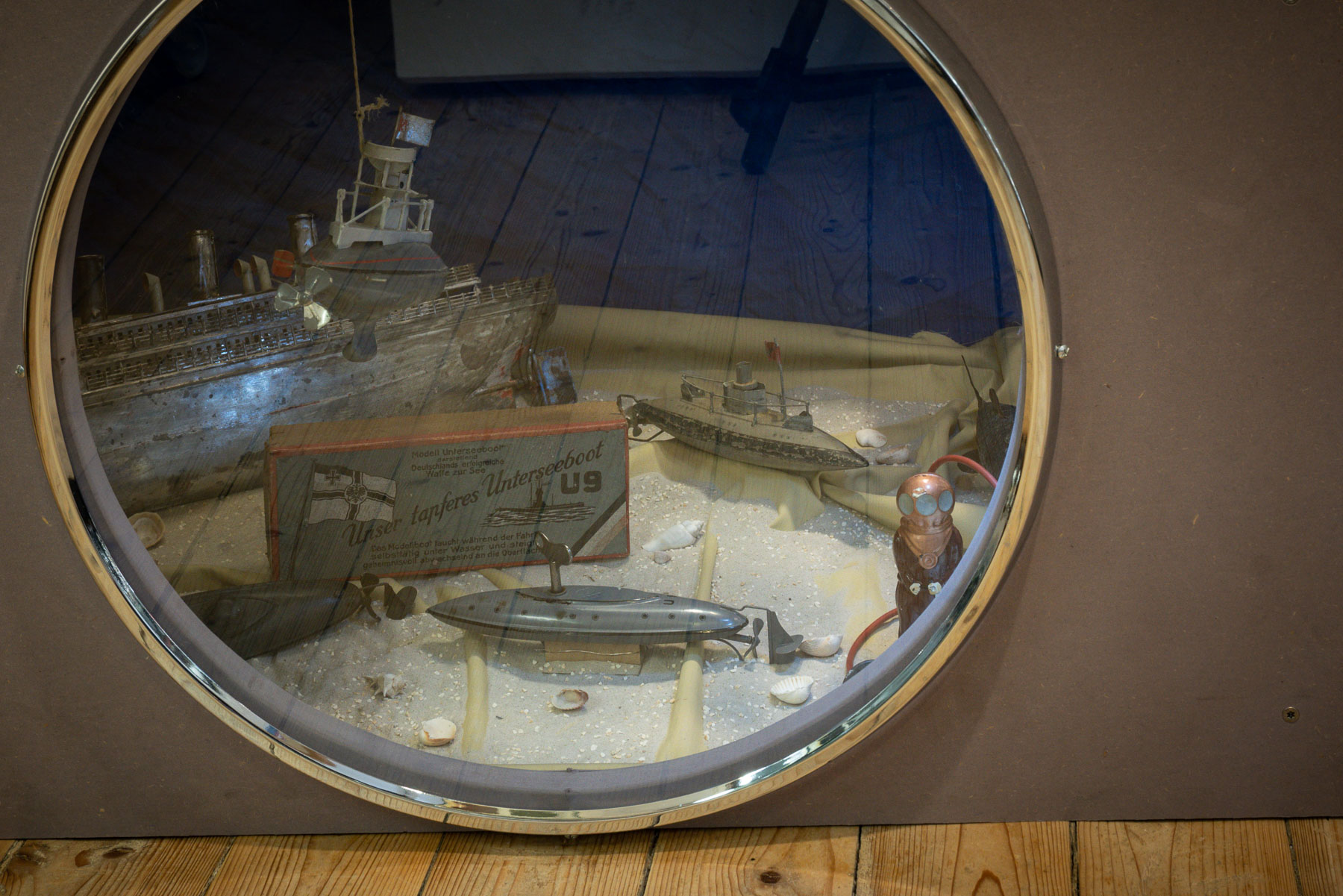 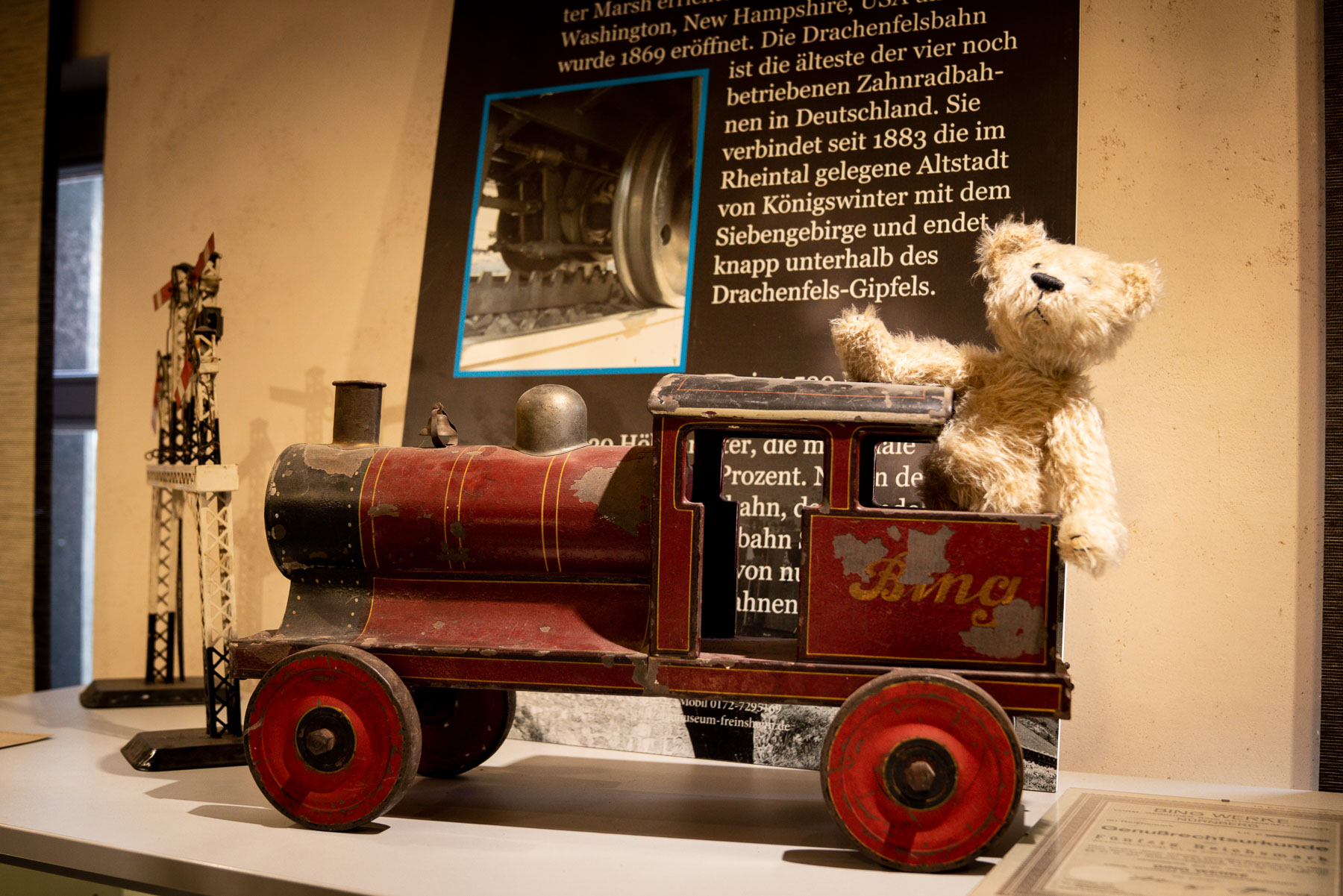