It hasn’t served its original purpose for a long time and it even landed in the scrapyard once: But the Altrheinfähre (literally: Old Rhine Ferry) between Friesenheimer Insel island and the Mannheim Sandhofen neighbourhood has returned. Thanks to some enthusiasts’ persistent commitment, you can still discover the beauty of the industrial island from this perspective, even after 120 years.

Certain places remain the same. These places don’t even intend to keep abreast of the times but rather maintain their very own, unhurried rhythm. The northern edge of Friesenheimer Insel island in Mannheim is such a place. The meanders of the original course of the Rhine River, the Altrhein, flow slowly here. Driftwood wanders along the riverbank, birds sing and swans cackle. In this tranquil scene, by means of a rattling chain, the ferry has been brought from Friesenheimer Insel island to Mannheim Sandhofen and back again for quite some 120 years.

Authorities use the name ‘Altrheinfähre Sandhofen’, but locals call her ‘Emma.’ This female name was given to her by long-standing ferryman Willi Bauer. Nobody knows where it derives from anymore, but the use of the name has persisted. The old ferry has a lot in common with its name twin Emma, the reliable steam locomotive in the children’s novel “Jim Button and Luke the Engine Driver.” The writer Michael Ende characterized it as “somewhat old-fashioned but dependable,” which fits the ferry just as much. It is the only regularly operating floating bridge of its kind in Germany.

Emma is on duty every day from April through September, except for Mondays. Fatmir Elshani is always aboard the ferry. Even if this leaves only one day for him in summer to fly to Kosovo to visit his mother. “That’s life,” he says. He has chosen to be a ferryman. Fatmir used to work as a waiter in the nearby fish restaurant ‘Dehus’ and he continues to work there in winter. Or on weekends during lunch break—the restaurant is booming. Town authorities were looking for a new ferryman in 2009 and couldn’t find anyone for a long time. “All right, I’ll take on the duty,” Fatmir decided and floats “to and fro, to and fro, …” and is on the ferry, even when nobody want to go to or fro. 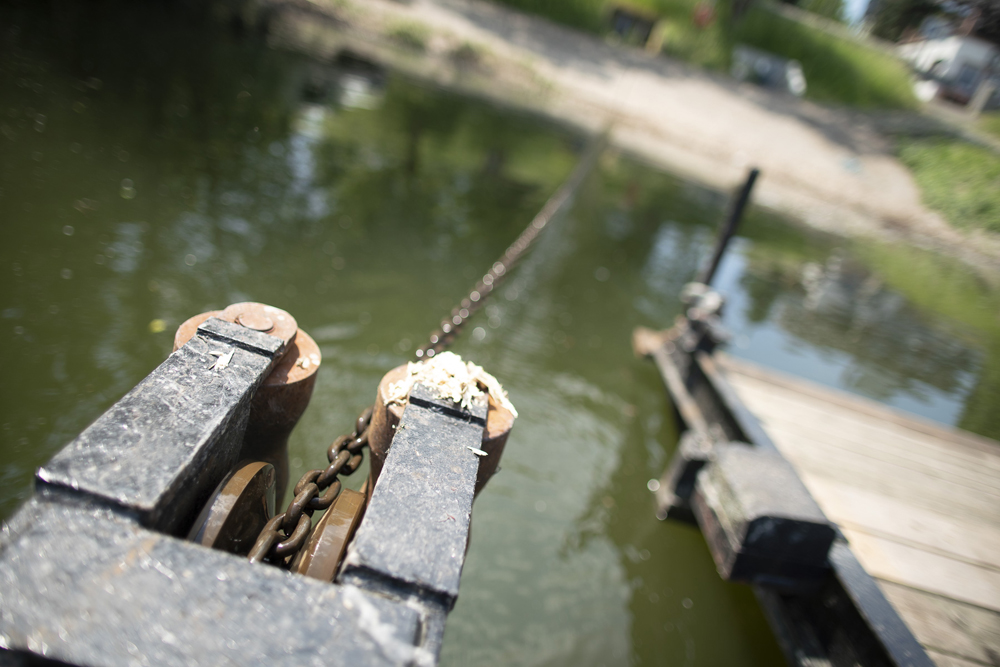 He doesn’t like lazy days when he and Emma have to wait for passengers. He spends them scrubbing or oiling the ferry or attempting to have a nap in one of the plastic chairs whose reddish colour has been faded by the sun. “But this attempt usually fails.” So he strolls towards the restaurant, drinks a coffee or two, “cruises the internet” and has an eye on the scene to spot oncoming passengers on the bank “over here or over there”, which sounds like “hiwwe oder driwwe” in Palatinate dialect.

“Where are you off to today—Venice?”

Fatmir likes the busy days much better—when someone listens to his jokes, his gesturing hands have an audience and the weather-beaten suntanned wrinkles have something to laugh about. Down to earth with his legs astride, wearing shirt and shorts he stands on the ferry, in backless slippers with white socks. He bows courteously to the passengers and guides them onto the ferry with an inviting gesture: “Where are you off to today—Venice?” He answers the passengers’ enquiry on the departure time saying “when the bus is fully loaded” and the enquiry about the price responding “100 euro.” Then he smirks and lies in wait for the response. And when the river police’s speedboat trailer on the Sandhofen bank gets stuck again, he chugs over, unpacks his toolbox equipped to serve any incident and lends a hand. The ferryman—like the good guys in the white hats. The policemen smile with confirmation: “Indeed, he helps maintaining law and order.”

The place only became an island since the straightening of the Rhine. The ‘Friesenheimer Durchstich’ opening cut the farmers in Friesenheim and Oppau off from their fields back in 1827. They had to move via ferries ever since. In 1862 the island now located on the right of the Rhine became part of Baden and Sandhofen. Mannheim acquired the island in 1895 and began constructing the industrial harbour. The farmers from Sandhofen insisted on the ferry service. So Mannheim commissioned its construction. In 1899, the ferry crossed the water for the first time. When Sandhofen became a part of Mannheim in 1913, it was included in the incorporation treaty that the ferry service be continued.

The course of the Rhine around Mannheim: The Quadratestadt (‘square town’) at the bottom right; Friesenheimer Insel island to the north with the opening westwards and Sandhofen north-eastwards. The little spot between the island and Sandhofen is the Altrheinfähre ferry.

It should not, however, be taken for granted that the ferry still crosses the river today, 120 years after its initiation. “It certainly wasn’t intended to be in operation for such a long time,” says Roland Seitz, who works at the local planning and construction authority. Tractors don’t cross the water here anymore. “Modern Bulldogs are way too big for the ferry. And they are quick enough to make the detour over the bridge.” Emma hasn’t served her original purpose for a long time. “But she has dear friends, who care for her and are active on her behalf,” says Roland, such as marine engineer Claus Winterheld, who has known Emma since his childhood and for whom the ferry is an integral part of Friesenheim island. Emma didn’t pass a technical inspection in 2008 and should have been fully repaired for 300,000 euro. Too much for the town.  “I fetched it from the scrapyard,” says Claus with a firm and committed tone. He sought and found further supporters, including the town, and they restored the ferry together. Claus became operator of the ferry service, which is still owned by the town.

Richard Dehus, whose restaurant of the same name is located just above the mooring, was the previous operator for many years. The restaurant is about as old as the ferry itself. Has anything changed here over the past few years? “No,” answers Fatmir surprised and almost with dismay. Most visitors here are regular guests. They have always been sitting on these dark wood chairs with flowering cushions and eating what the river and the island have to offer: pike, pikeperch and catfish, an occasional boar or roe deer—cooked by current owner Georg Wetzel, the ‘spaetzle gramps’, who will be standing at the hot stove as long as he is able to stand, as he declares firmly.

Georg Wetzel: owner and chef at Restaurant Dehus “for as long as I can stand.”

After having had their meals, many guests cross the water with Fatmir. It is just a must. Apart from these passengers, Emma mainly carries bikers from one river bank to the other—such as Rob Kraneveld, who rides on the Rhine cycle track along the entire river from its mouth in Antwerp to its headwaters in the Swiss Alps; or regular guest Timo Siedelberg, who goes to work by bike from Heidelberg to the north of Mannheim on fine-weather days and who even makes a detour on his bike to be able to cross the water by ferry; or Roland, who goes to Lampertheim every Sunday by train and strolls back to the Mannheim part of town Neckarstadt. He takes more than one ferry trip with Emma at a time—the five-minute journey is clearly not sufficient enough to take a ride with and have a decent talk with Fatmir.

Informations from the ADFC

Timo Siedelberg and Eva Robben on their way to work.

Rob Kraneveld rides his bike along the Rhine: from the mouth of the river to its headwaters. 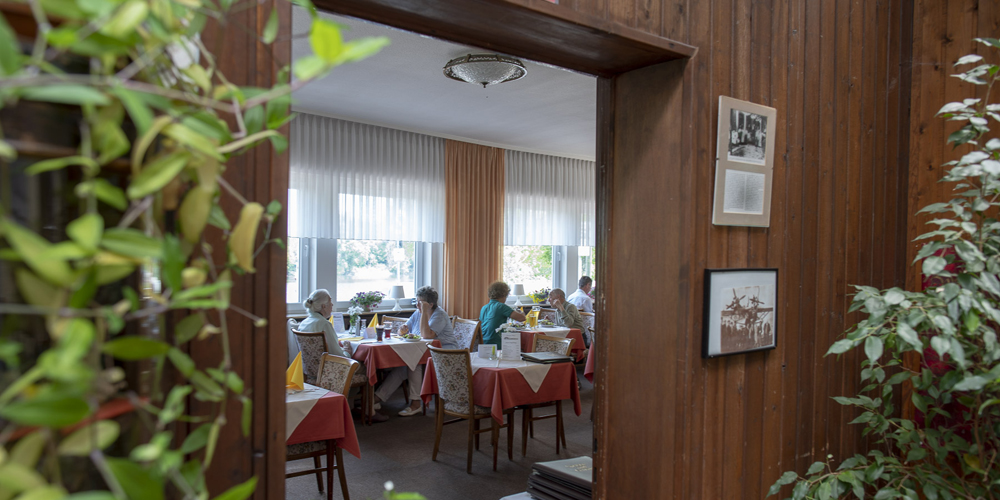 Fish from the Rhine and game from the island is on the menu at Restaurant Dehus. 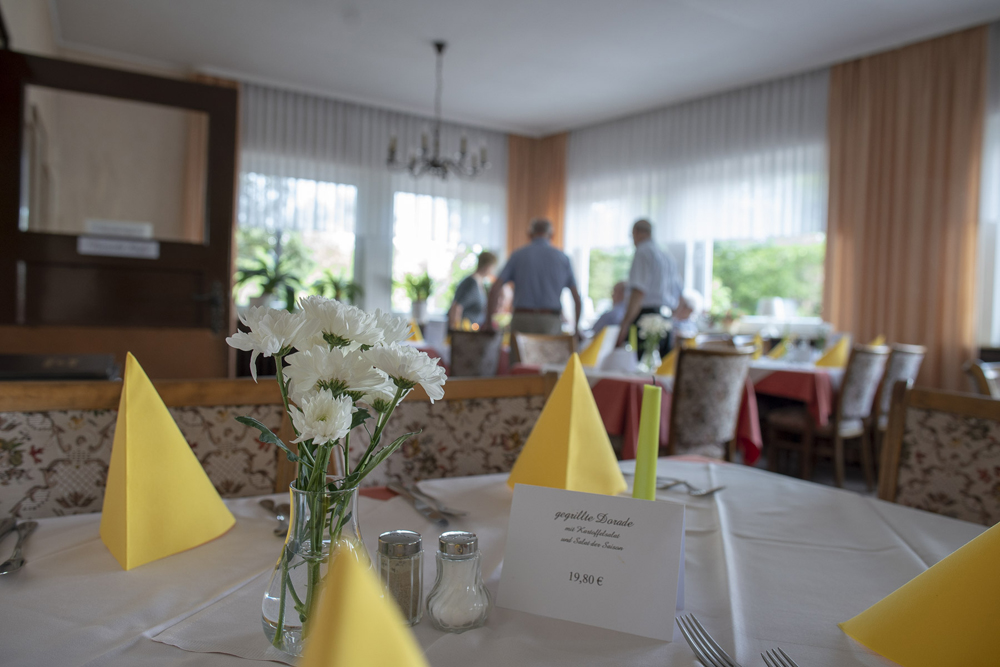