Sauntering Just for Fun in the Summer Breeze

The Fürstenlager (prince’s camp) on the Bergstraße route, the place where a noble family from Darmstadt used to spend the warm months of the year, is one of the most beautiful landscape gardens in Germany – not despite, but rather because of its special exotic, steep and sublime details.

At the end of the 18th century the French people became convinced: Their queen had finally gotten completely crazy. Marie Antoinette has always had unconventional ideas, but now the monarch obsessed with luxury began to play the farmer’s wife. In the Gardens of Versailles, she had an idealized village erected—with a dairy and a mill. And on the Bergstraße route? A similar idea was born: The Landgrave Louis X of Hesse-Darmstadt was, just like Marie Antoinette, in search of a place that was far away from the usual court ceremonial. It was most convenient that the noble family had owned beautiful grounds in Auerbach for a while, which were to be called Fürstenlager (prince’s camp) in the vernacular: several hectares large, with a mineral spring in its middle and with lots of space for ideas that were modern in those days. 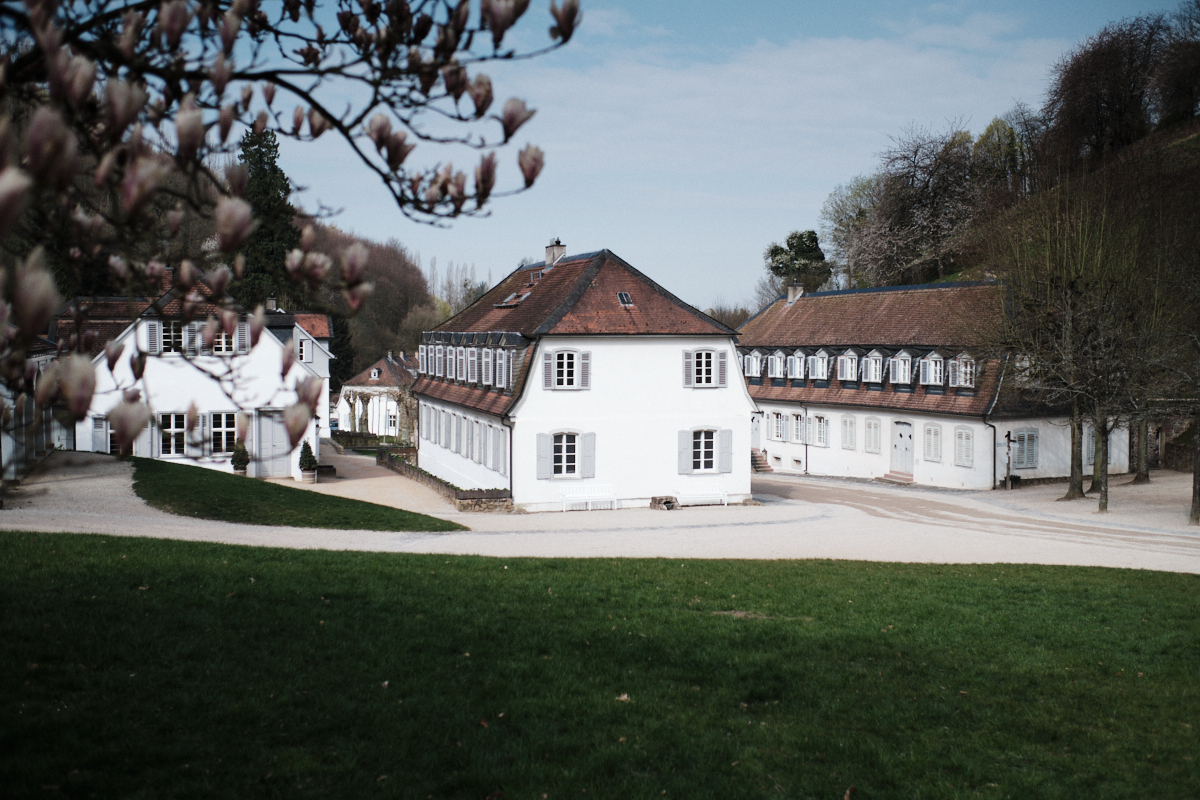 The Landgrave Louis X of Hesse-Darmstadt was in search of a place that was far away from the usual court ceremonial.

Which were these ideas? Nobody knows them better than Stefan Jagenteufl. This morning, the over 200-year-old star magnolia in front of the manor house is in full blossom—so splendidly that it bewitches you. One of the many woodpeckers pecks about, a water fountain splashes. This is how peaceful and sublime this simple, steep piece of land must have appeared back then to the noble family from Darmstadt. “Towns used to smell of cloaca. They were longing for summer holiday,” says Stefan, who has managed the Fürstenlager in Bensheim-Auerbach as well as the Prinz-Georg-Garten gardens in Darmstadt since 2005 and who has a number of other occupations: he is a master in horticulture and landscape architecture as well as an inventor and manager of events, curator of monuments and archaeobotanist. 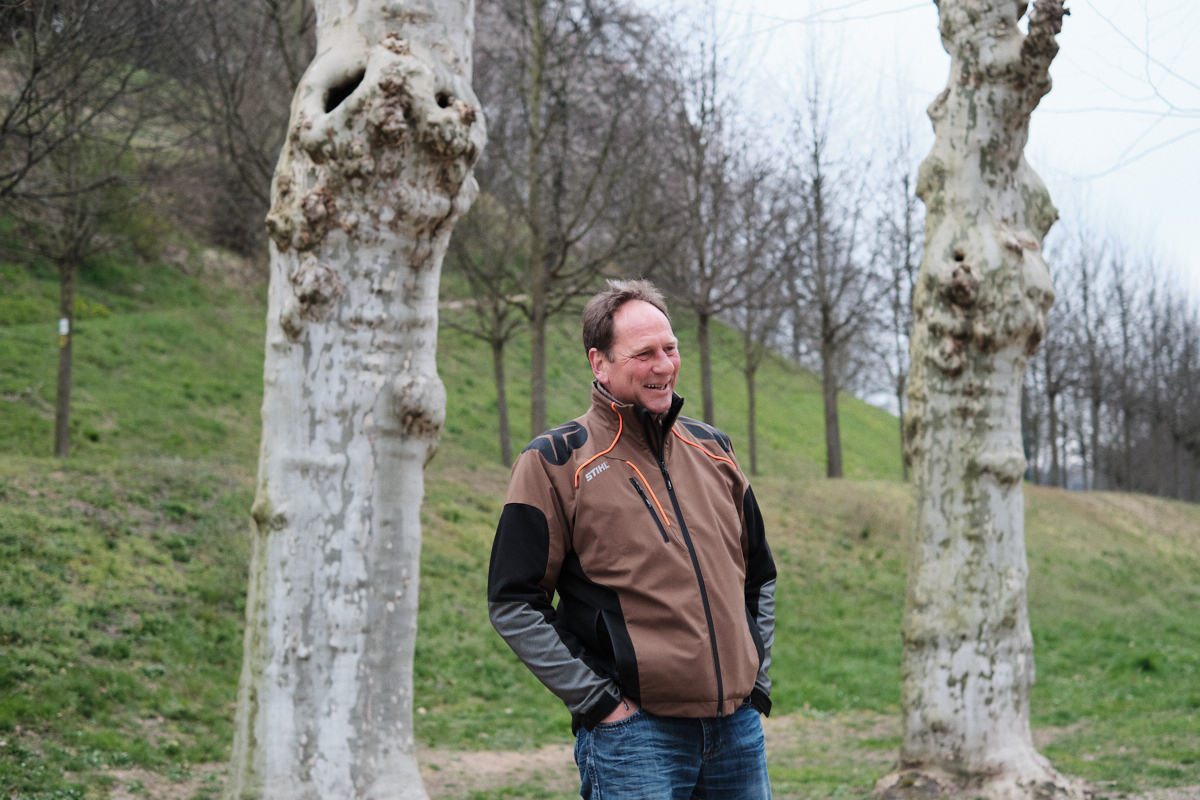 About 100 years before Louis turned the grounds in Auerbach into an English landscape garden, it was already known that there was a mineral spring here. A health resort was installed, however, the Fürstenlager never became a noble spa: “The quality of the water was too changeable,” says Stefan while water drips in barely noticeable quantities out of the plain, sandstone ‘health spring’ in front of him. The spring is the heart of the artificial village complex with its 14 buildings, which the prince had erected. While Marie Antoinette liked to spend her nights in the luxurious little castle Trianon next to her model village, the noble family from Darmstadt was really residing here. Outdoors. But not foregoing certain convenience—provided by fish-farming, the elegant manor house and a confectioner’s. Foregoing, however, too much of a ceremonial: “Everything here breathes peace and rural quiet,” Carl Friedrich Mosch praised the Fürstenlager in a spa guide in 1820. “There is no etiquette here, no constraint.” 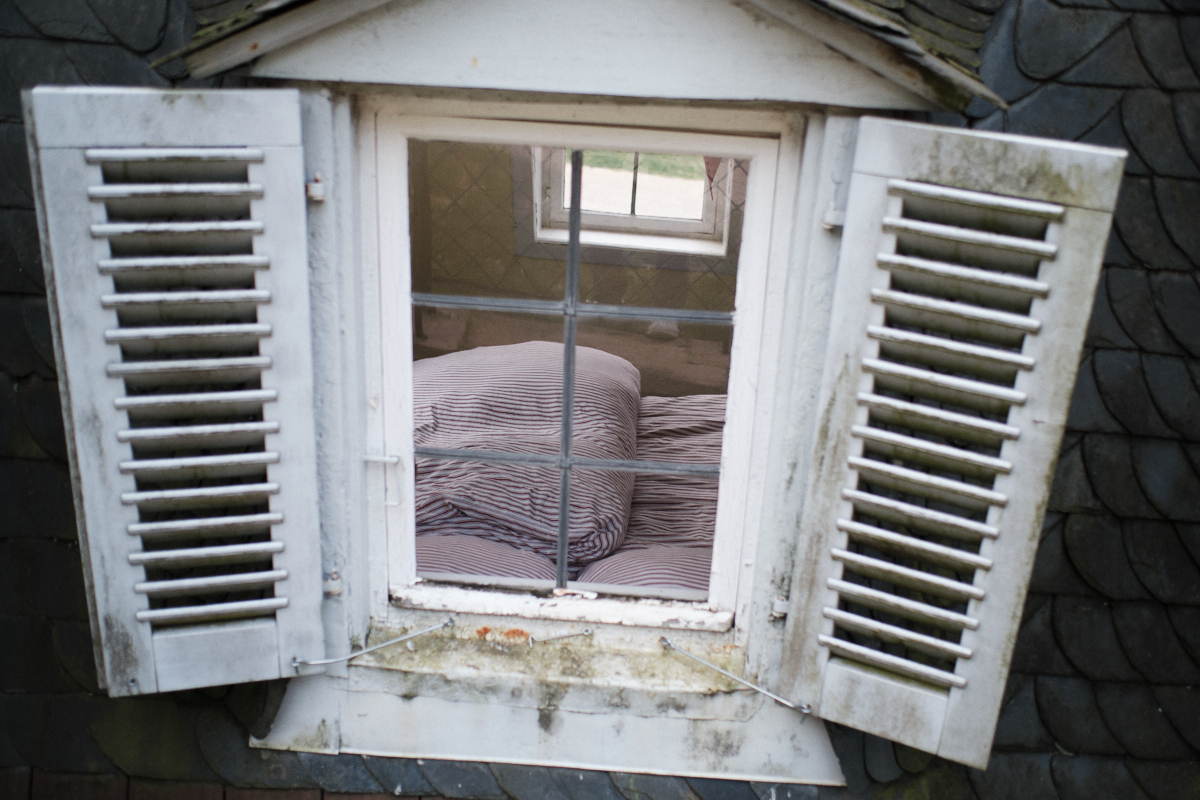 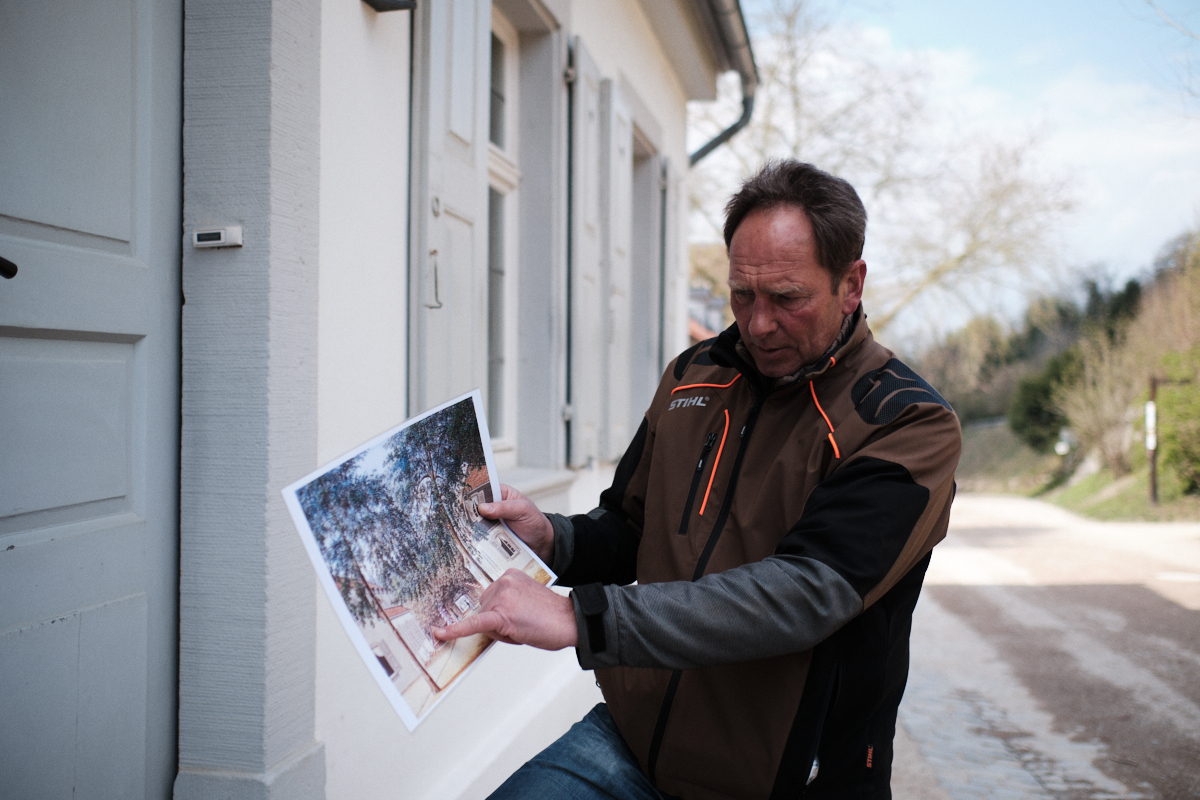 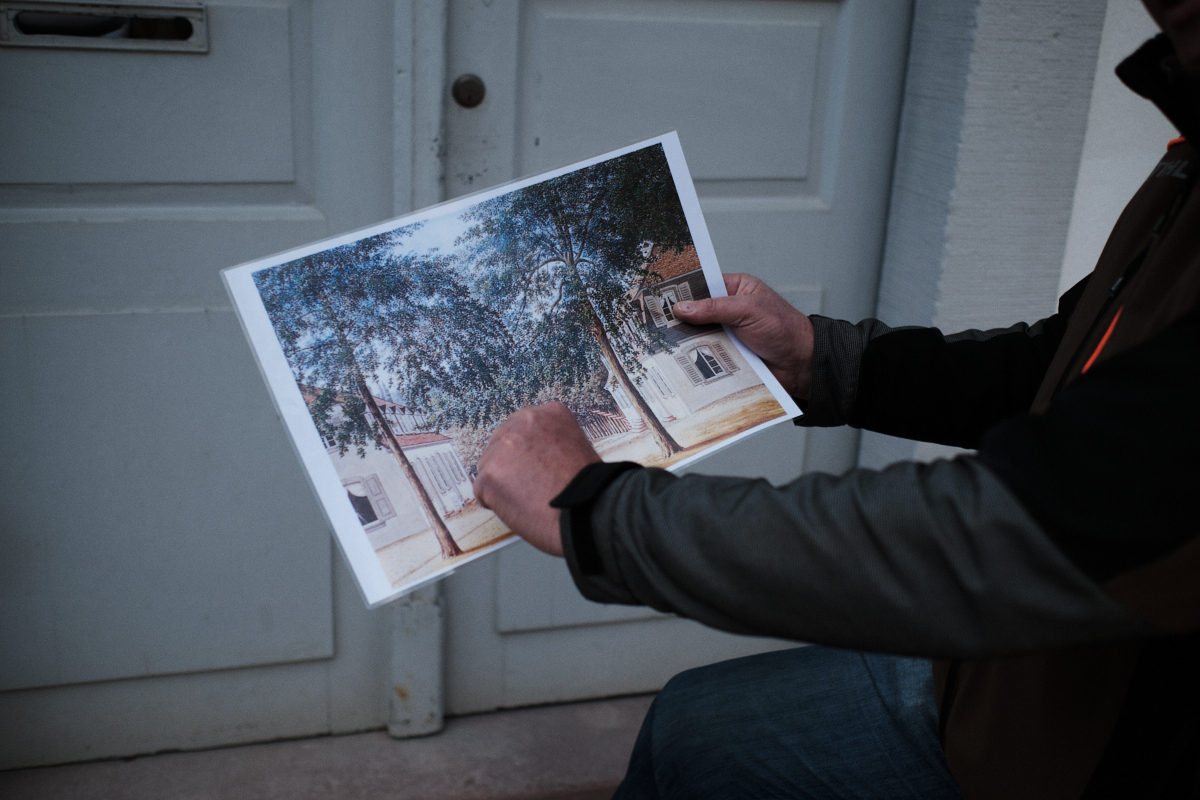 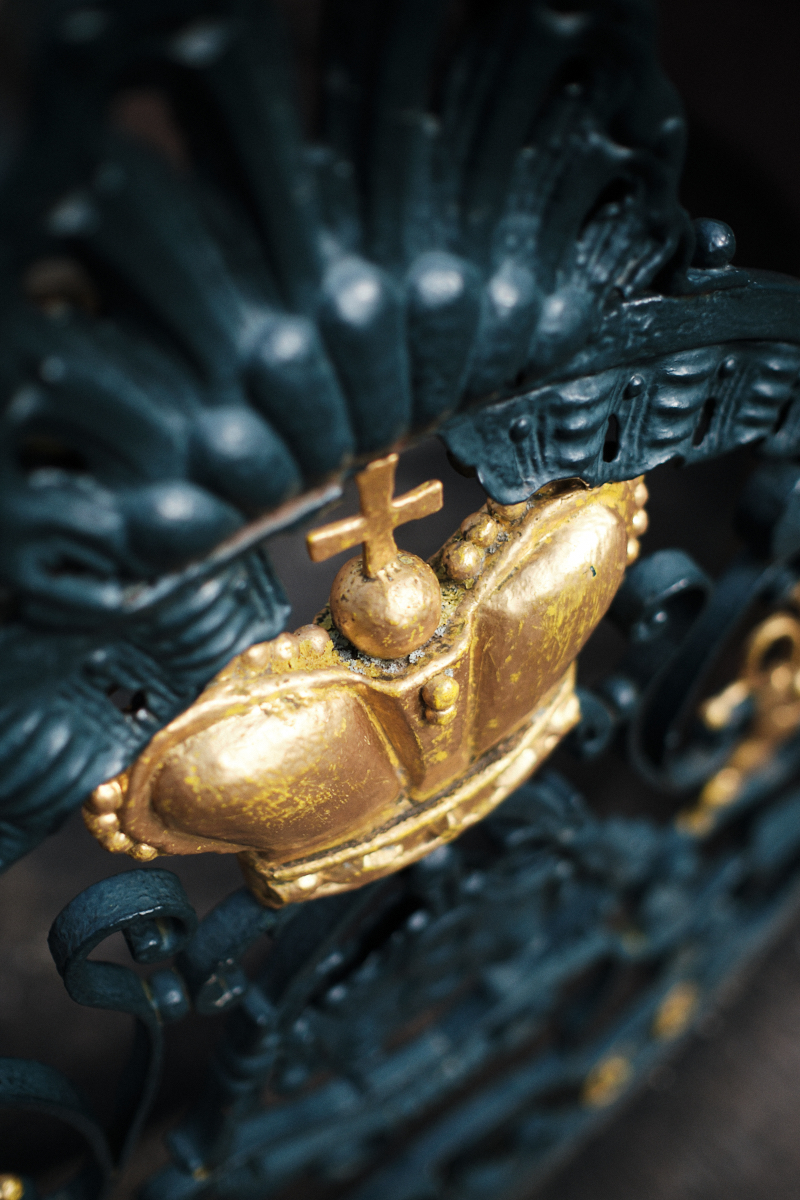 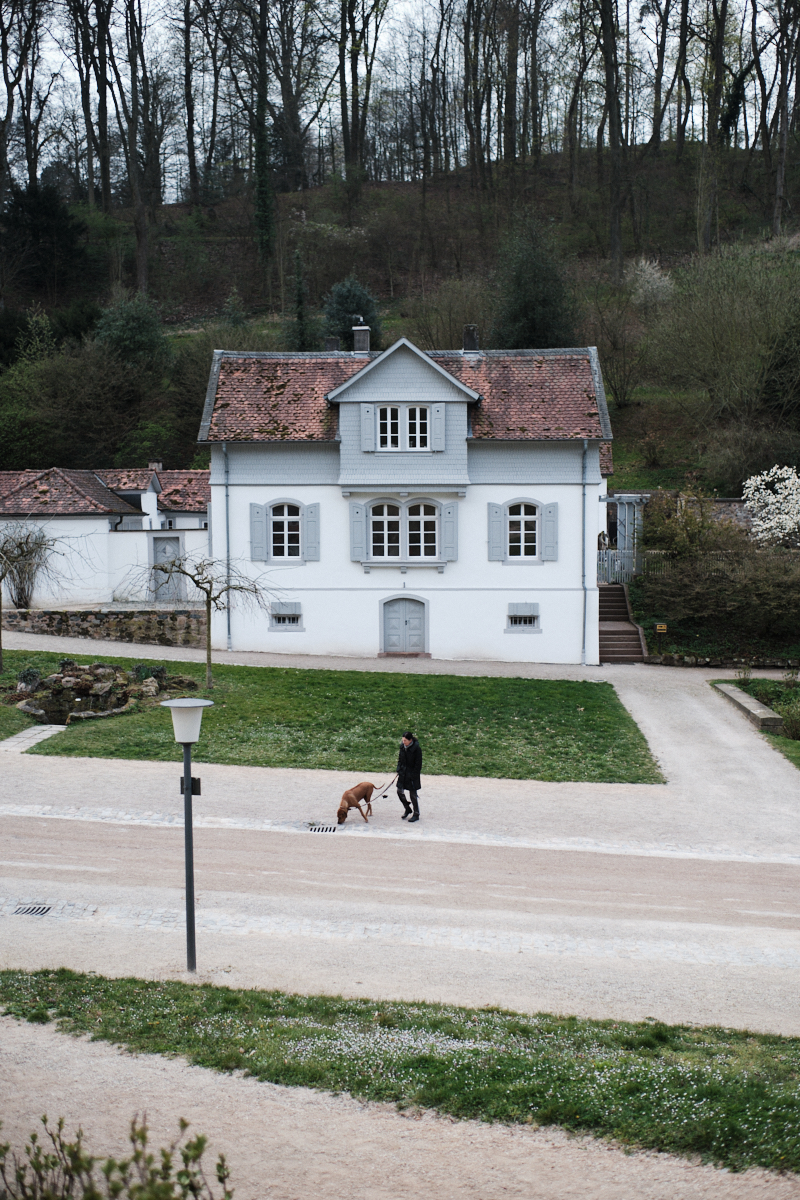 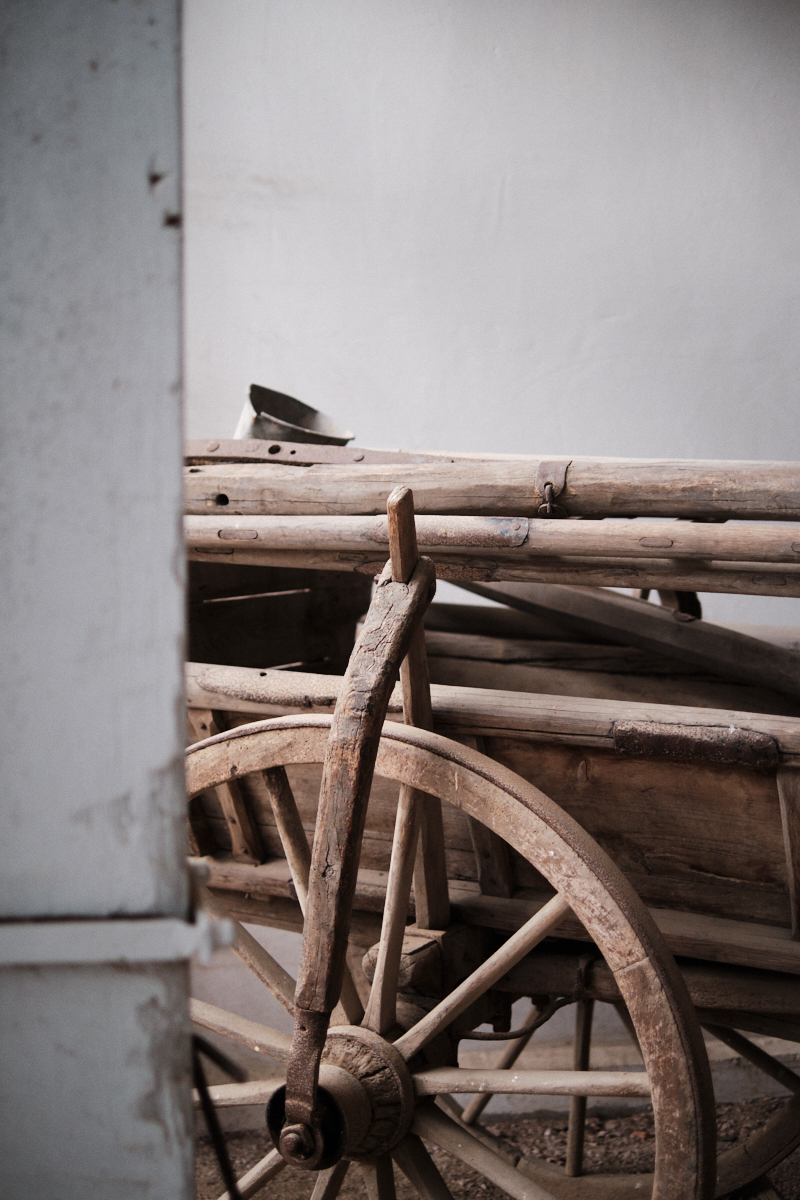 In 1783 Louis and his wife Louise spent summer in the Fürstenlager for the first time and from then on he returned every year from May to September. As an expression of their worldly manner, the couple had about 50 exotic trees and bushes planted, including one of the currently oldest giant redwoods in Germany. Roe deer, badgers, foxes, fire salamanders, snakes, martens, weasels, polecats and buzzards live on the estate that extends across some 142 elevation gain metres up and down. “There is even a weather divide on the estate,” says Stefan, which means differences in temperature of up to four degrees. From the Teehaus (teahouse), you can overlook the Rhine valley right to the Vosges mountain range on fine-weather days.

“In the park, gardening art and agriculture should merge”

Over 100 people lived in the Fürstenlager during the summer months—20 of them aristocrats. Unlike Versailles, the Fürstenlager was no fake: “In the park, gardening art and agriculture should merge,” says the park manager. This mentality has persisted till today: the surrounding orchards are worked, the wood from the forest is sold. And the estate, even though artificially created, was intended to appear natural. Tree-lined walks lead to viewpoints, to the enchanted Eremitage in the forest or to the plain beautiful Freundschaftstempel (temple of friendship) high up at the slope, but nothing appears engineered like in a Baroque garden. There are no straight or even right-angled paths.

Tree-lined walks lead to the enchanted Eremitage in the forest.

Quite the opposite: “The garden is designed in a way that after each bend there is a surprise,” explains Stefan, who grew up in Bad Homburg with the legendary castle grounds in front of his eyes. He trained there and even managed the estate for two years and another one, the Schlossgarten Biebrich in Wiesbaden, afterwards. “However, I find the Fürstenlager the most fascinating of the estates, because such a big variety exists on a relatively small terrain.” The estate in Auerbach is 46 hectares large, which makes it the third largest park of its kind in Hesse, after the Niederwalddenkmal in Rüdesheim and the Wilhelmshöhe landscape park in Kassel. It takes 6.4 kilometres to go round it. The park has never been fenced entirely, not even at the times of princes. “There used to be a guarded barrier there, but the park has practically always been open to everyone.” 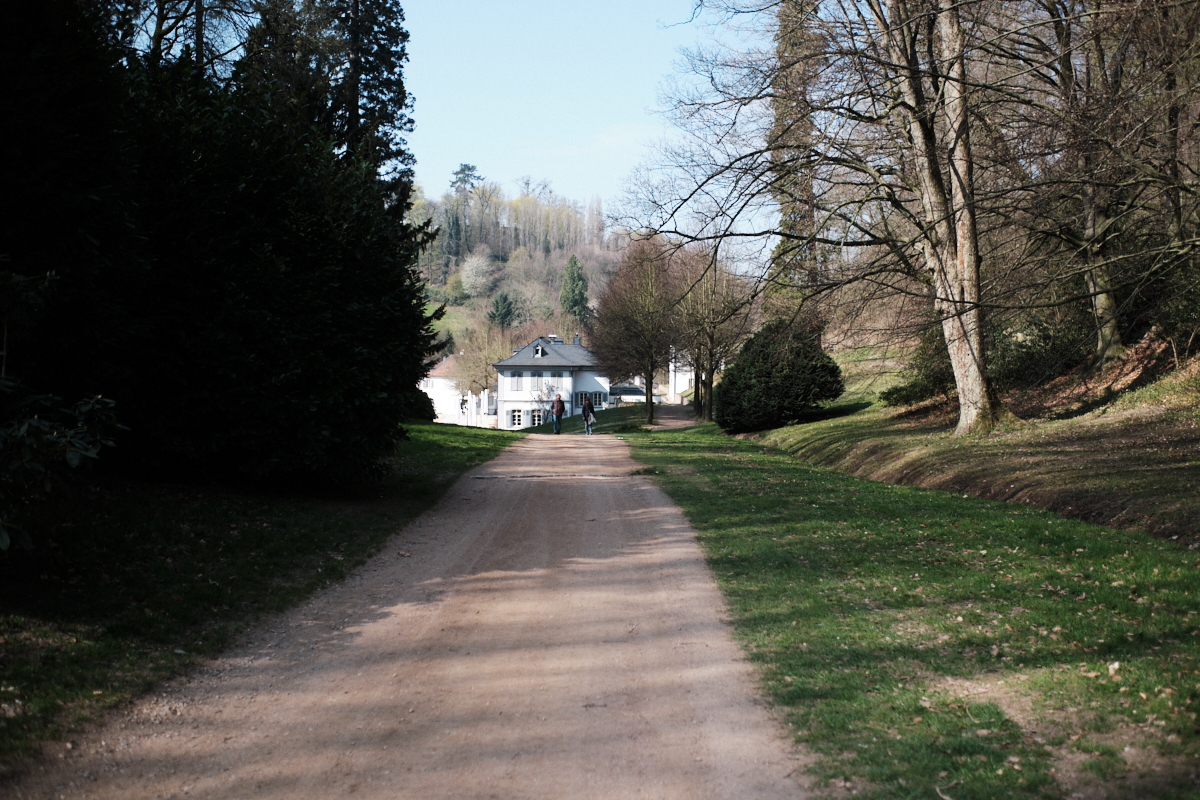 The estate in Auerbach is 46 hectares large.

Stefan lives in the house of the well guardian—facing up to 8,000 visitors to the Fürstenlager on summer weekends directly opposite him. How can you keep a distance then? “You can’t,” says the master gardener and laughs. His working days are always long, beginning at 7 am with the regular meeting and ending not before 7 pm usually. The obligation for park managers to be present in the park was abolished in Hesse in the 90s. However, Stefan would never move from the park. “You have to experience such a park round the year to fully understand it.” 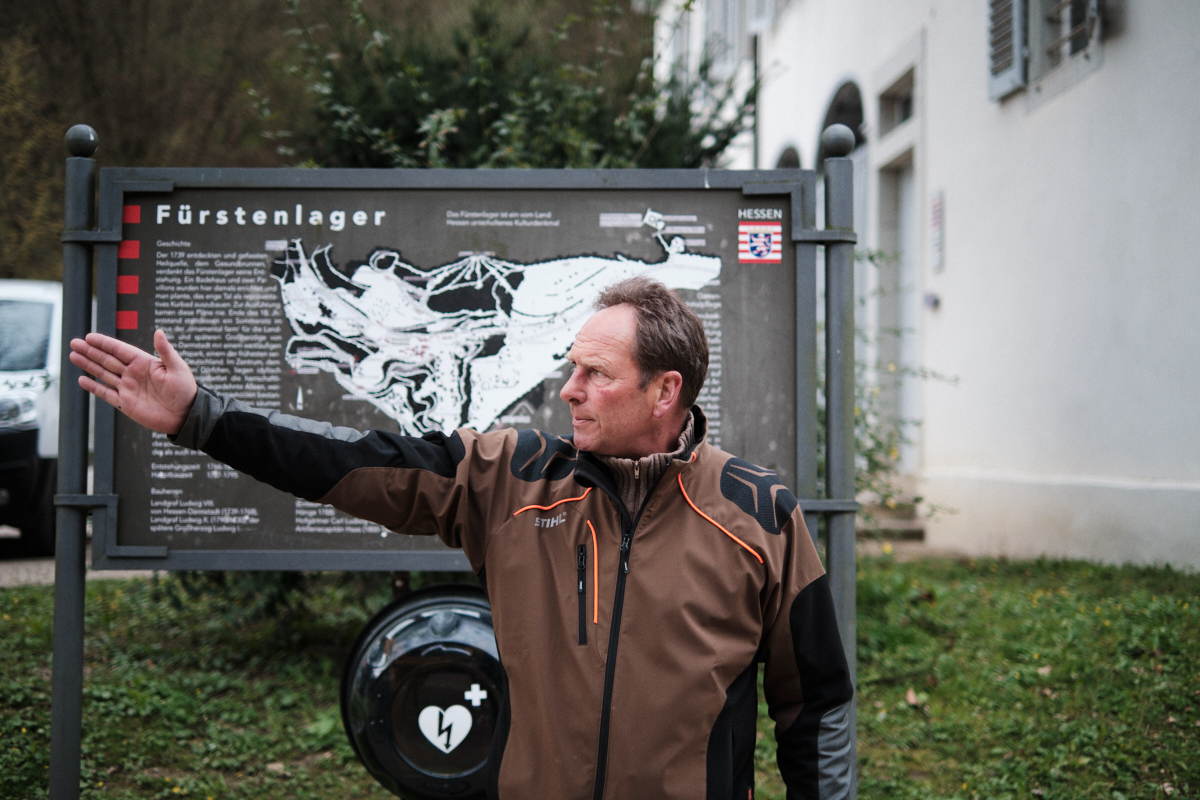 Stefan lives in the house of the well guardian: “You have to experience such a park round the year to fully understand it.”

Understanding the park—for Stefan this means to redesign it in the way it used to be in 1800. He even works in archaeobotany for this purpose: Where was a particular shrub located, where did a today vanished tree line once begin or end? Stefan would direct a car’s headlights across the estate at nightfall to discover old vistas, or recover old paths using a lawnmower in a first step. He had 1,200 cubic metres of soil removed in front of the manor house close to the fountain—restoring the proportions of the park arrangement as well of the neighbouring manor house. 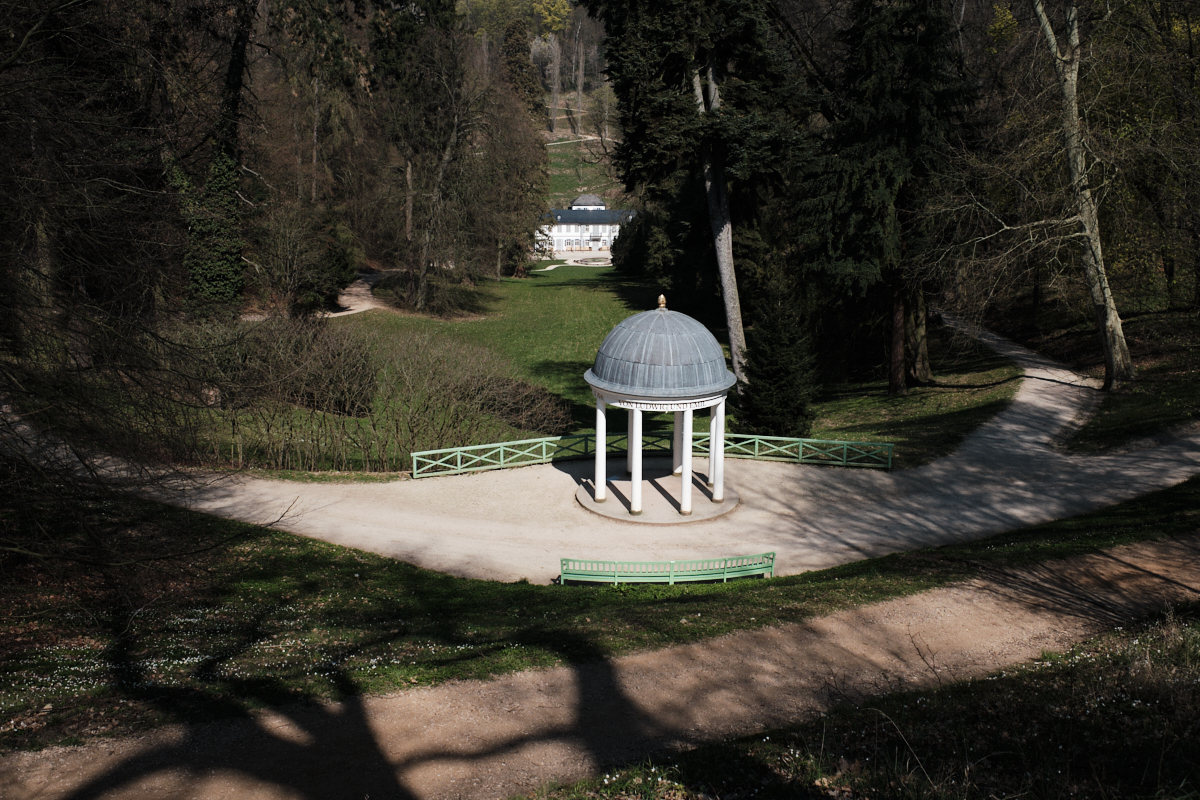 What’s next? He wants to design the old kitchen garden again, a historical rose oval and a fortress. “The Javandtsburg fortress was not much more than a big room,” Stefan explains. A room, however, that the chief hunting official had equipped cosily with a fireplace and a terrace. A donation campaign by the Bensheim Kur- und Verkehrsverein club aims at raising the funds for its reconstruction. It is almost 40 years now that Stefan has worked in historical gardens. He is confident that the Javandtsburg will quickly have fans. “If I change something in the park and people are convinced that it has always been this way anyway, then I’m doing a good job indeed.” 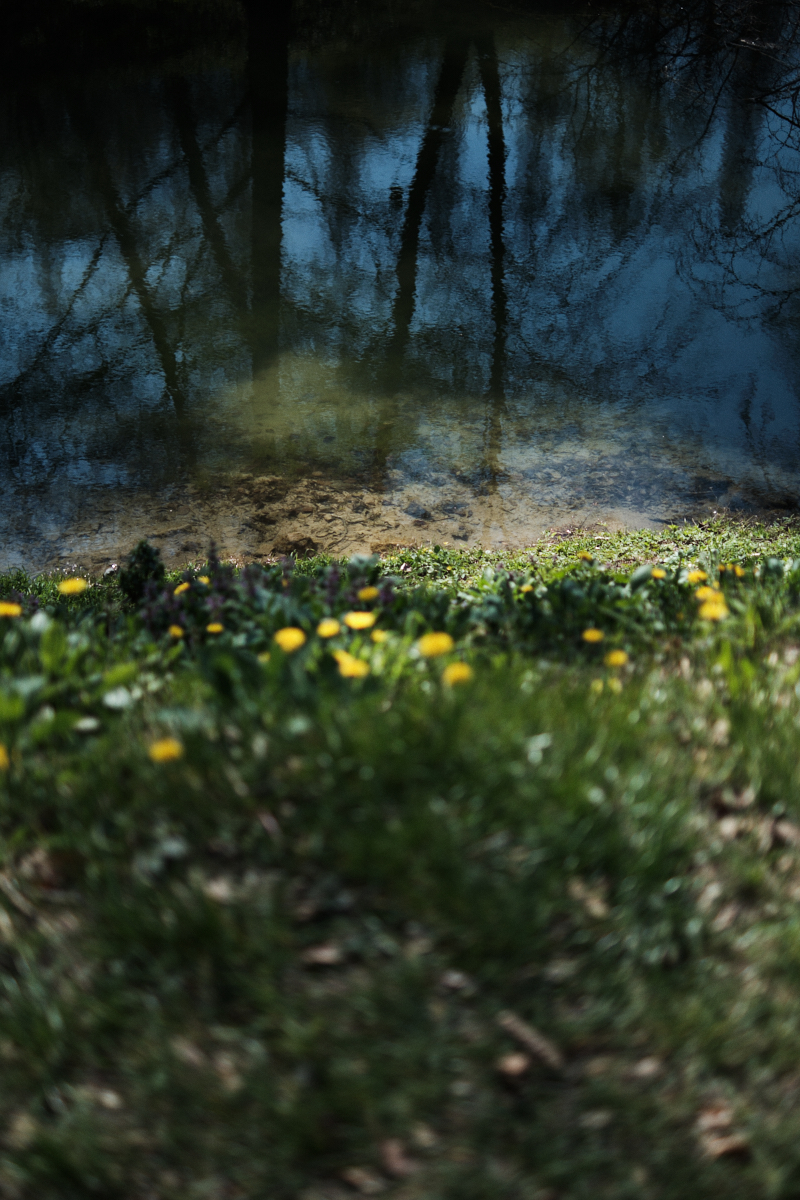 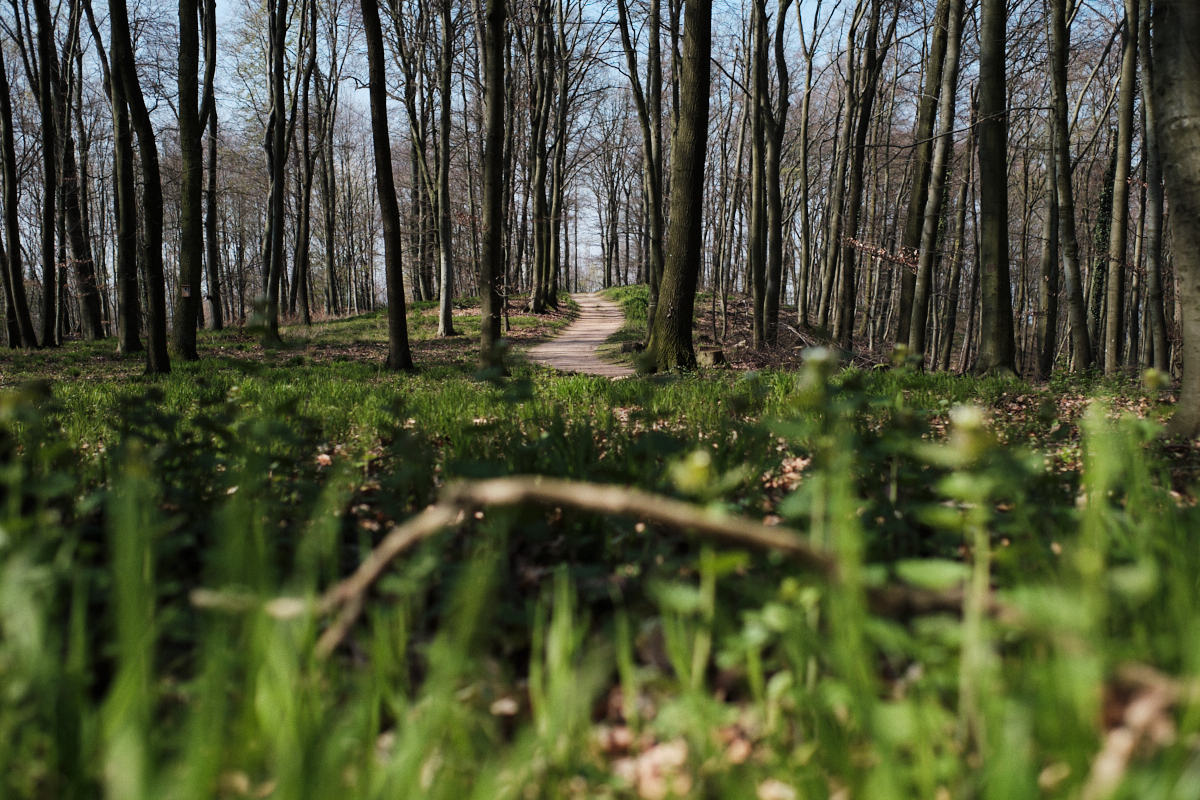 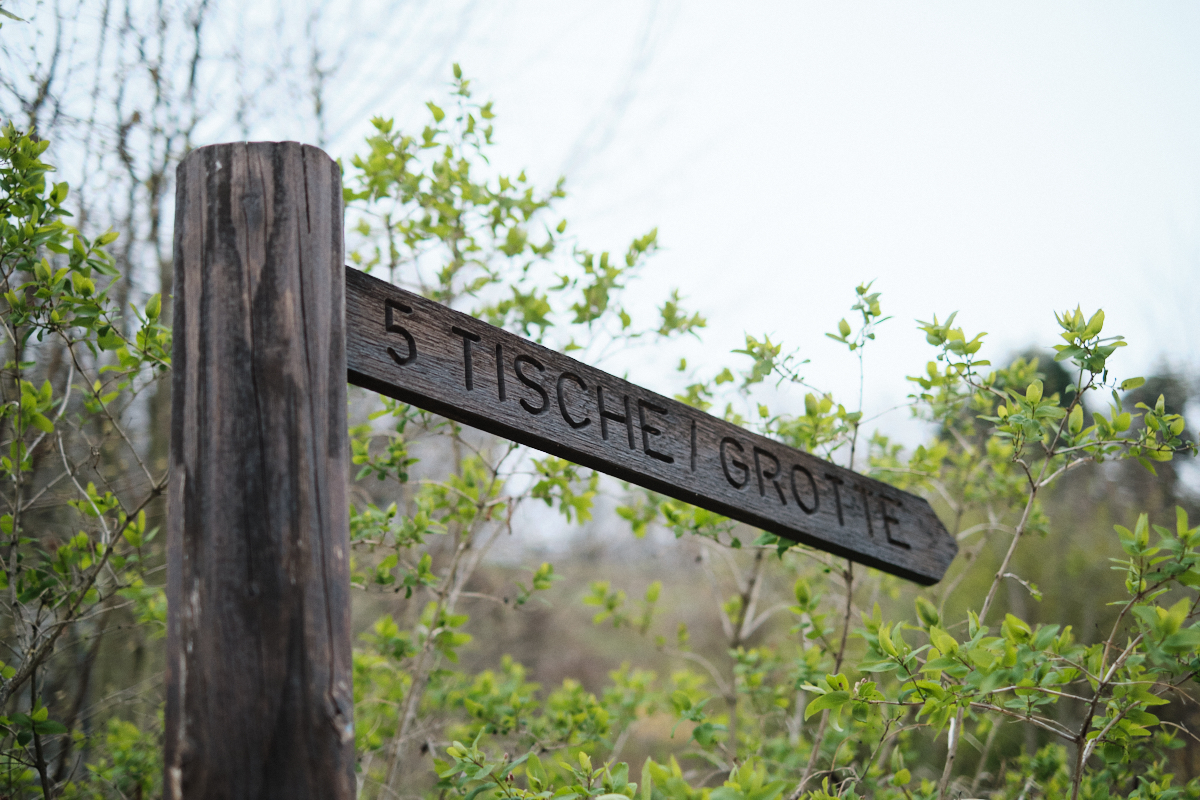 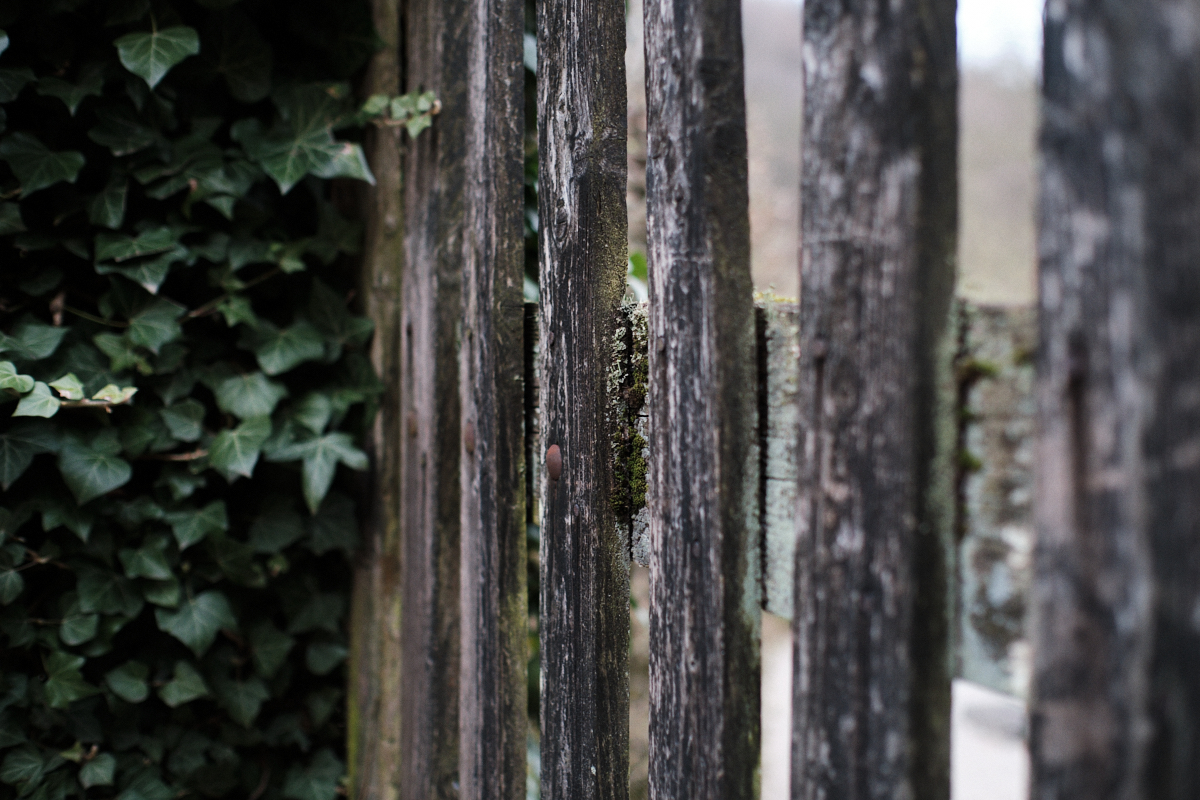 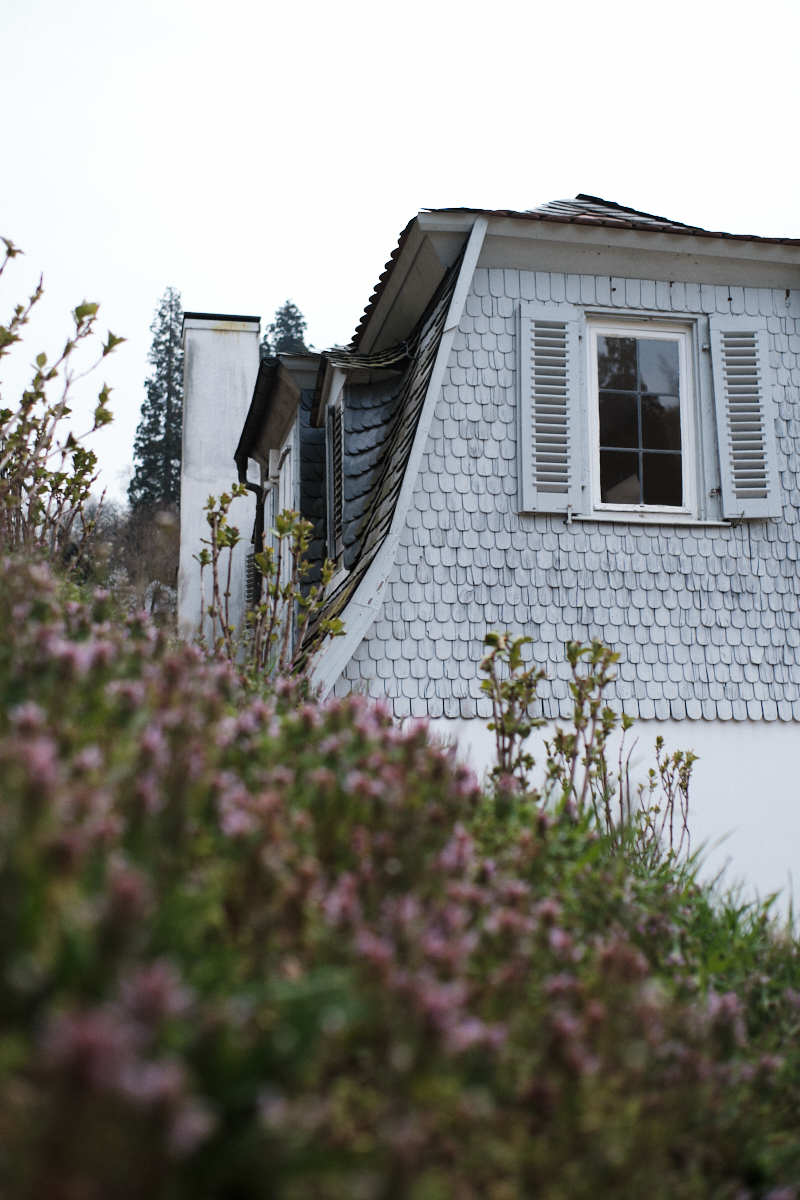 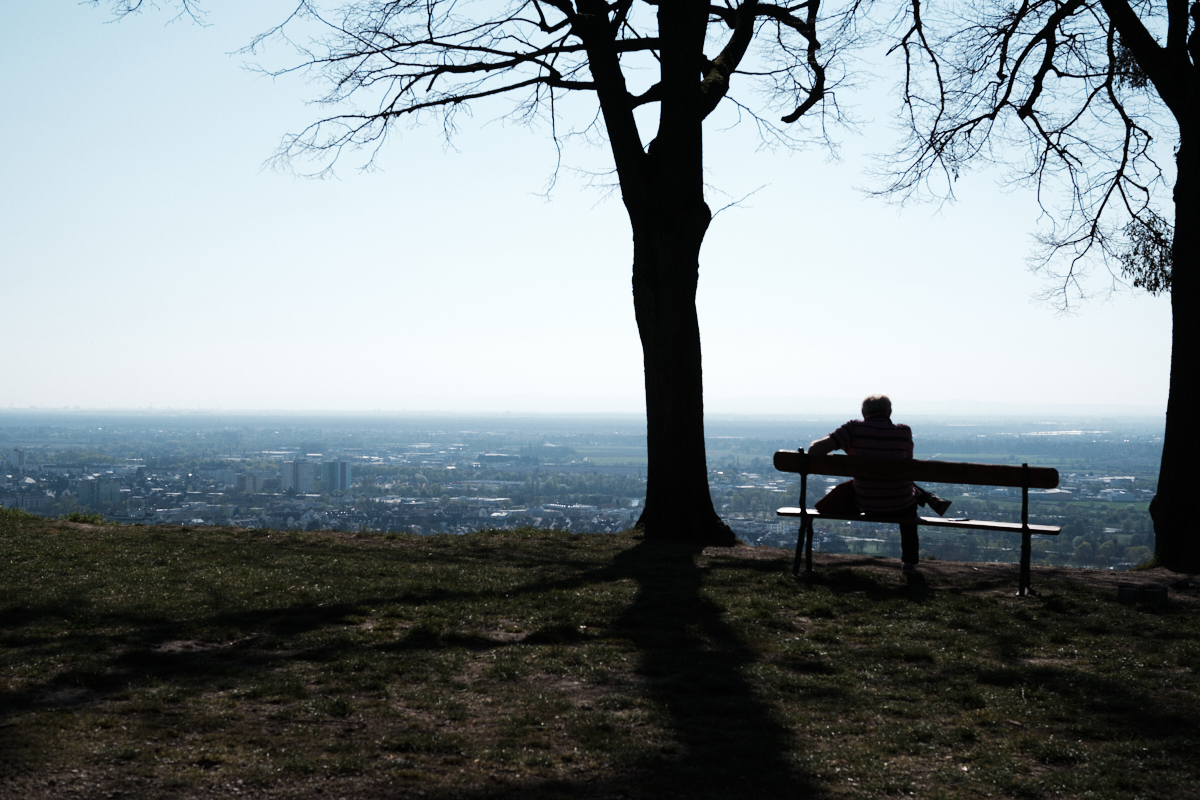