In the cosmos of reptiles

At eighteen, Uwe Wünstel moved out of home – not for a woman, but for a snake. Today he runs Europe’s biggest reptile zoo in the city of Landau.

A snake such as Albert could be used as a necklace. At least for a short moment. He has proved it many times. The male black-tailed python had been positioned on lightly dressed female skin and published in the magazines “Playboy” and “Vogue”. This afternoon, however, there will be no photo shoot with the yellow and white albino snake. He is dozing composing himself on the fork of a tree and his zoo keeper Uwe Wünstel is watching him from the other side of the terrarium pane. “I saw him hatching out of his egg,” the director of the reptile house “Reptilium” in Landau tells us almost lovingly. Not quite like a father, he says, but if he felt a bond between him and one of the animals, it would be Albert.

A reptile is not at all a cuddly toy, but it is the passion of a man who built up the biggest reptile zoo in Europe. He has done it off his own bat and without any funding. Wünstel manages the “Reptilium”, which is home to over 1,000 animals making up 140 species, together with his family and 28 employees on a surface of 5,400 square metres. What makes his reptile zoo special is that he has created an impressive reptile cosmos rather than just stringing together terraria. In no time, visitors are guided from the desert to the tropics, through the subtropics and the rainforest. There is even a “Nachthaus” (night house), lit up by artificial moonlight. Here, you can watch animals such as the nocturnal leopard gecko, which crawls around under the special light when visitors enter.

When a software company building was turned into this zoo twelve years ago, Uwe Wünstel paid particular attention to keeping the animals spaciously and in environments appropriate to their species and to making visitors aware of each terrarium reflecting a particular part of nature. In a period of only five months, he thus created habitats in cooperation with the biologist Thomas Willms who is a deputy zoo director in the city of Frankfurt today. What came of it are terraria such as the one with species from South America. Oscar fish are swimming in the basin and Geoffroy’s toadhead turtles are drowsing on its bank, with common marmosets and green iguanas hopping above their heads. 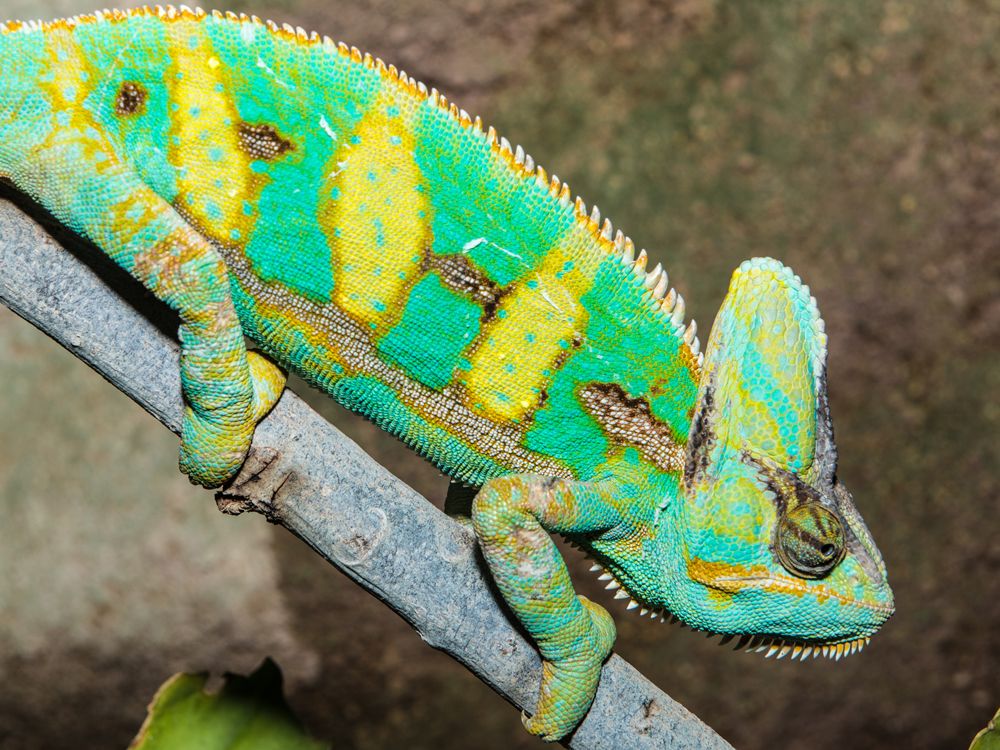 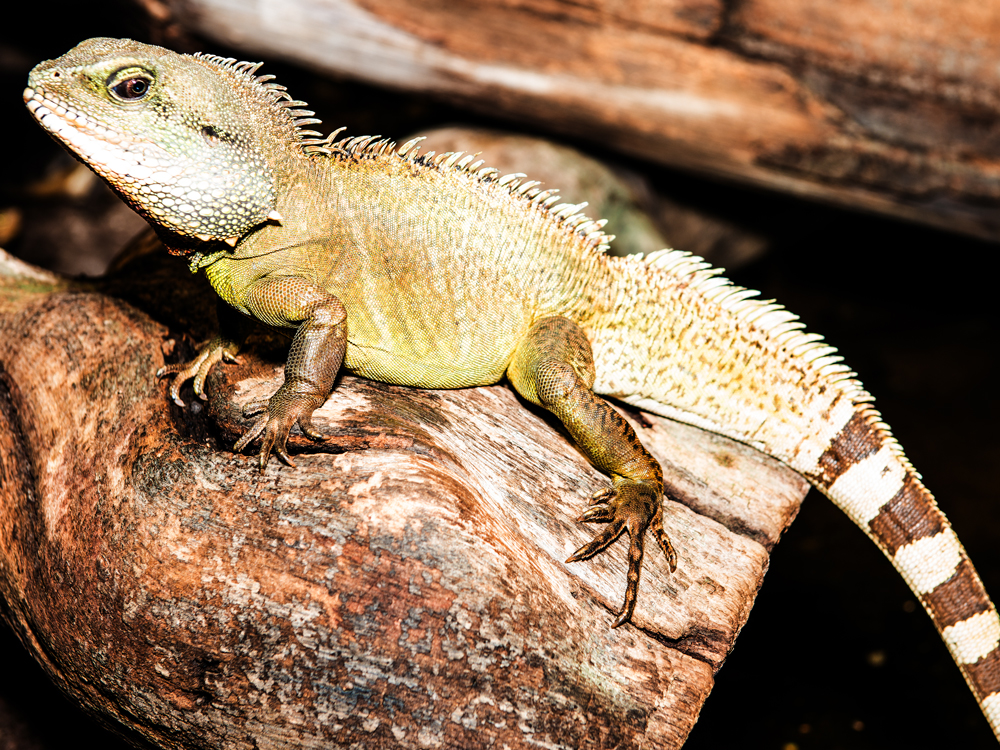 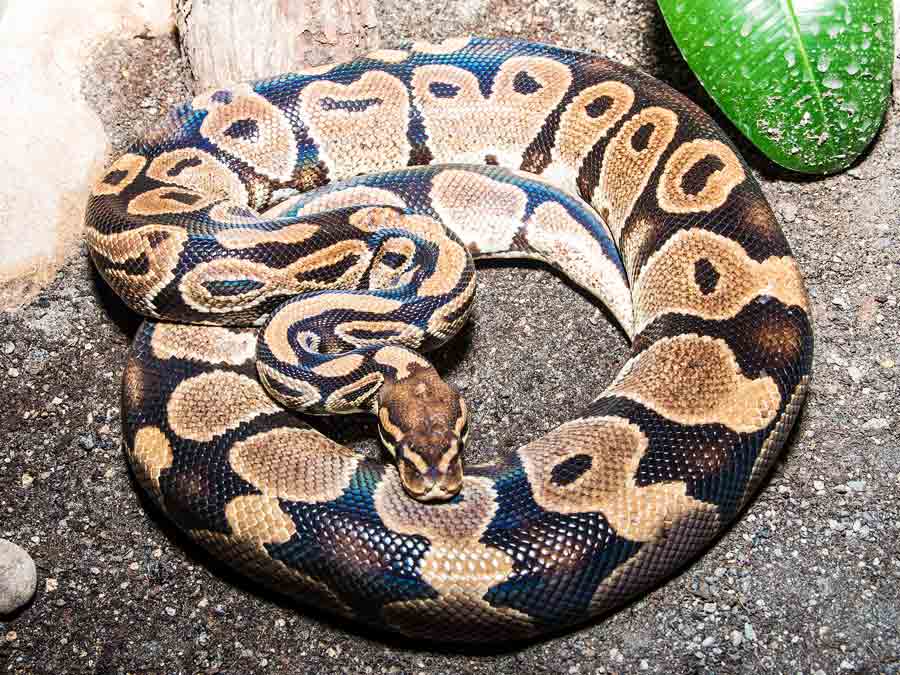 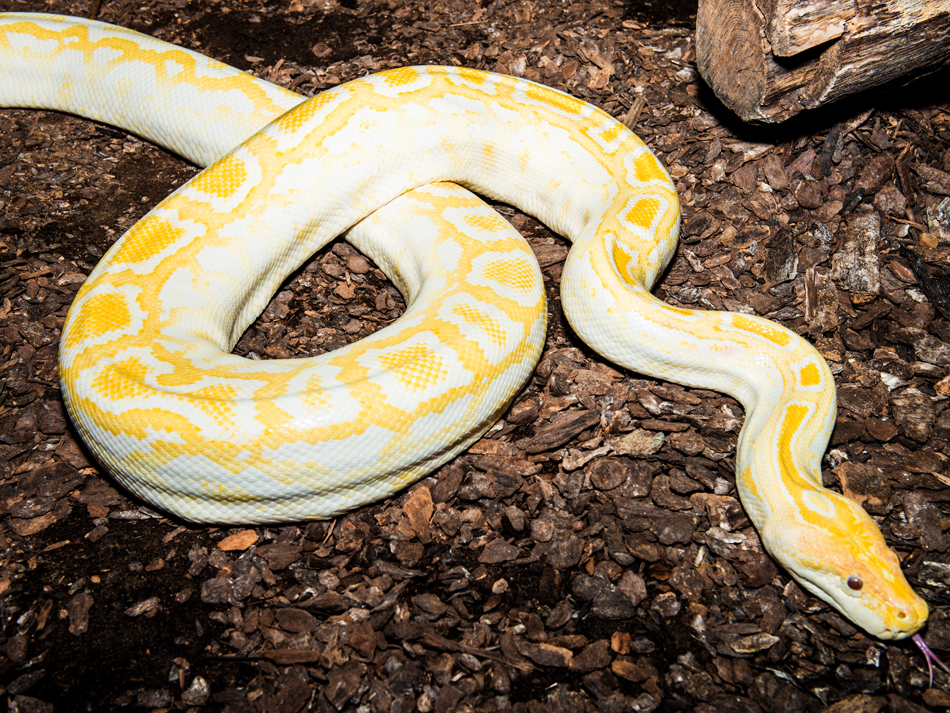 ”It took us four full shipping containers with plants to equip all terraria,” Uwe Wünstel tells us, “it was much easier to go and get the animals.” He is an expert in the industry and has fine connections. His zoo has recently started to breed some of the rare species. “Smuggling is a major issue,” so the “Reptilium” constantly admits animals that are found at airports or borders. Such as the star tortoise that was found together with 375 of its fellow species in two suitcases or the common snapping turtles that were crawling around in the Palatinate region on the streets. Uwe Wünstel shows us indigenous reptiles in the 2,000 square metre open terrain, such as the European pond turtle, native to the Rhine Plain, or the Aesculapian snake, the biggest snake in Germany.

There are also mammals in the “Reptilium”, but only four types of them. Meerkats are top dog in the desert hall and this afternoon they are somewhat nervous, because glider pilots from the nearby airport cross the area repeatedly, watched carefully from through the window pane. “They think these are predatory birds,” is the explanation, so the meerkats installed some kind of a security team.

The desert hall hosts about 25 events per year: weddings, photography workshops, or reptile keeping lessons for beginners and for advanced owners. Uwe Wünstel is self-educated. He started off doing an apprenticeship as a bricklayer and working as a building contractor before turning his passion into a profession. Sometimes, he was living in 60 square metres with 60 reptiles. Kindergarten groups, school children and all sorts of people kept coming to the Palatinate village Hatzenbühl to see his constrictor snakes, bird spiders, or geckos. This gave him the idea of setting up the “Reptilium”.

“I moved out of home at the age of 18, because of a boa constrictor,” Uwe Wünstel tells us with a smile about the beginning of the project. His parents refused to live under the same roof as a snake

Ironically, the four members of the Wünstel family actually live above the heads of the reptiles, on the top floor of the “Reptilium”. The eight-year-old daughter keeps a couple of rabbits. “You don’t actually play with the food!” her father says with a grin. But the fleecy fellow is not on the reptile menu, of course. However, you should hear about what else Uwe Wünstel is famed for in Germany: His insect cookery courses are booked out for months up front, and in case you don’t like pasta with mealworms… well, the “Reptilium” offers seminars on fear as well.