For the love of speaking dialect

“So as not to become extinct, a dialect must be nurtured,” says Ralf Frohnhäuser. This is one reason why he has become a member of the jury of the dialect competition called ‘Mundart-Wettbewerb Dannstadter Höhe’ that Toni Ostermayer won a number of times. Both speakers find that Pälzisch (pronounced: paltsish), the dialect native to the Palatinate, directly reaches the heart, and even Pennsylvania.

It arrived a few days ago: a thick, inconspicuous envelope, sent to him by Ute Günther from the town hall in Dannstadt-Schauernheim. Ralf Frohnhäuser holds the envelope in his hands like a trophy and feels its weight contentedly. He wanted to wait until he has sufficient time and silence to open it. It is weekend now and in the garden around his house in Hochdorf-Assenheim there is no noise but bird chirping and an occasional scraping sound by two tortoises in their enclosure. With a big smile on his face, Ralf opens the envelope in a ceremonial atmosphere: “I look forward to this moment every year,” even if it means a lot of work lying ahead of him. 51 poems and 22 pieces of prose packed in the envelope – all of them written “uff Pälzisch” (in Palatine dialect). Ralf will read every single work at least three times, many of them much more often.” 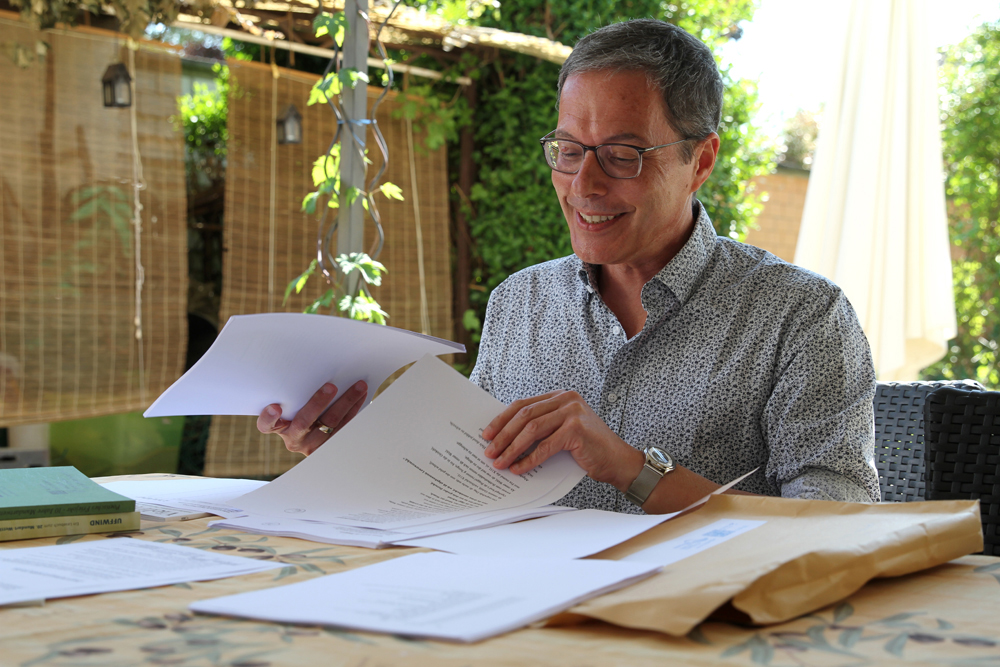 He has been a member of the jury of the dialect competition in Dannstadter Höhe since 2016. It is a task he does with passion—and with gratitude. “I accepted straight away when the mayor, Stefan Veth, asked me if I would like to join the jury.” Ralf is the director of the Grundschule Am Neuberg primary school in Rödersheim-Gronau. He supports local clubs with lots of commitment. And he goes into raptures about the “pleasant spirit of community” in the villages. Ralf is proud of contributing to keeping alive and celebrating the local dialect every year in the municipality. “So as not to become extinct, a dialect must be nurtured,” he says, because it is much more than just daily language. It means home and belonging, history, live style characteristics and humour as well. All of this is inherent in the texts lying in front of him now. He doesn’t know by whom they are written—they are just numbered. But he does know: There would be one by Toni Ostermayer among them. 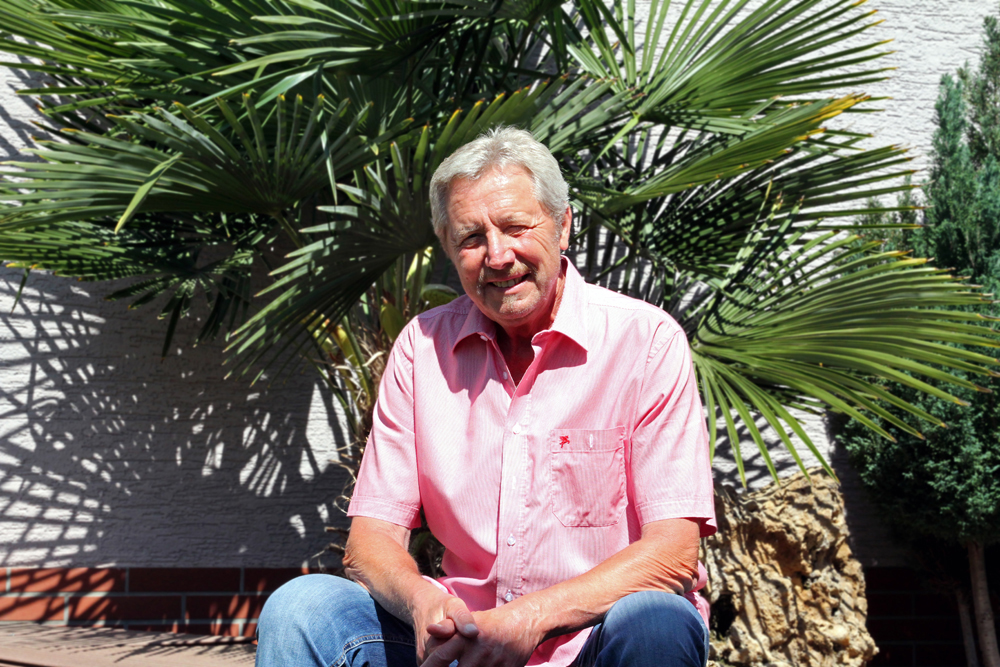 Toni Ostermayer: The native of Rödersheim is a pioneering poet.

The native of Rödersheim is a pioneering poet and repeatedly won the competition. He even took part in the event format that preceded the official competition in 1987. That year, the local men’s singing club ‘Frohsinn Rödersheim’ celebrated its 100th anniversary and it wanted to organize something special for this occasion: a competition in dialect speech. Response was overwhelming. Many more people than expected registered for it and the final lectures by the winners were such a big success that, the same day, the then mayor Heinz-Werner Ziegler decided to establish regular competitions in cooperation with the Volkshochschule public education centre in the Rhein-Pfalz-Kreis region. The first Mundart-Wettbewerb Dannstadter Höhe competition took place the next year at the ‘Radieselfest’, the red radish festival. 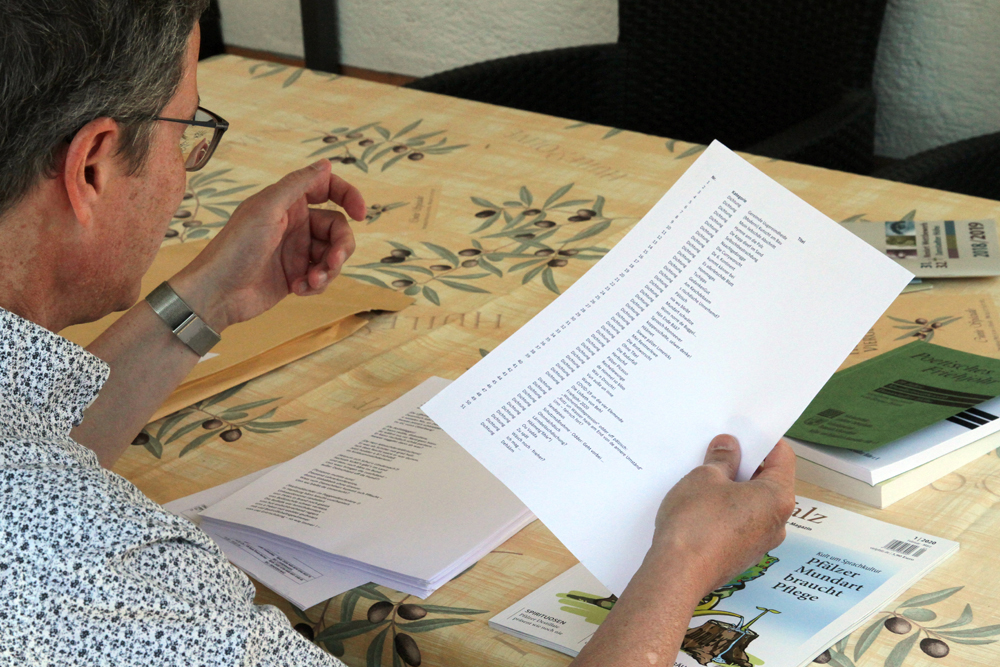 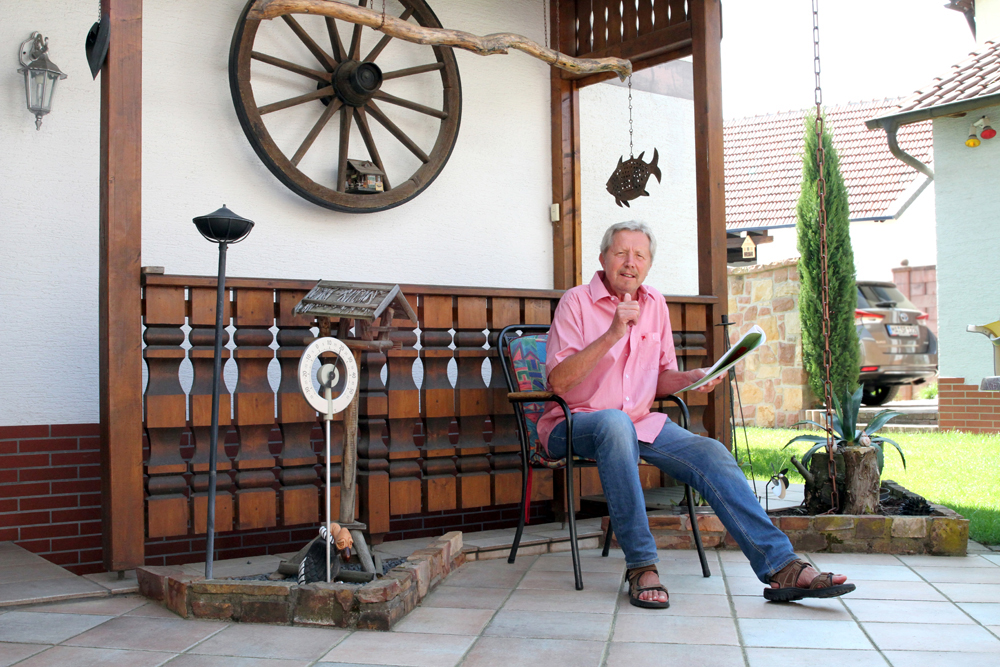 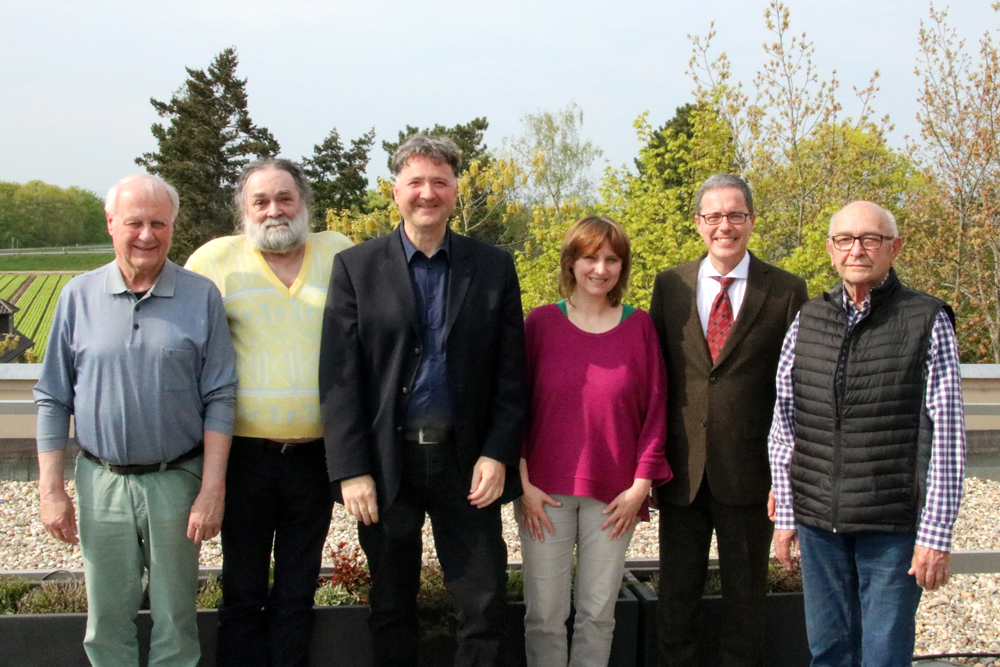 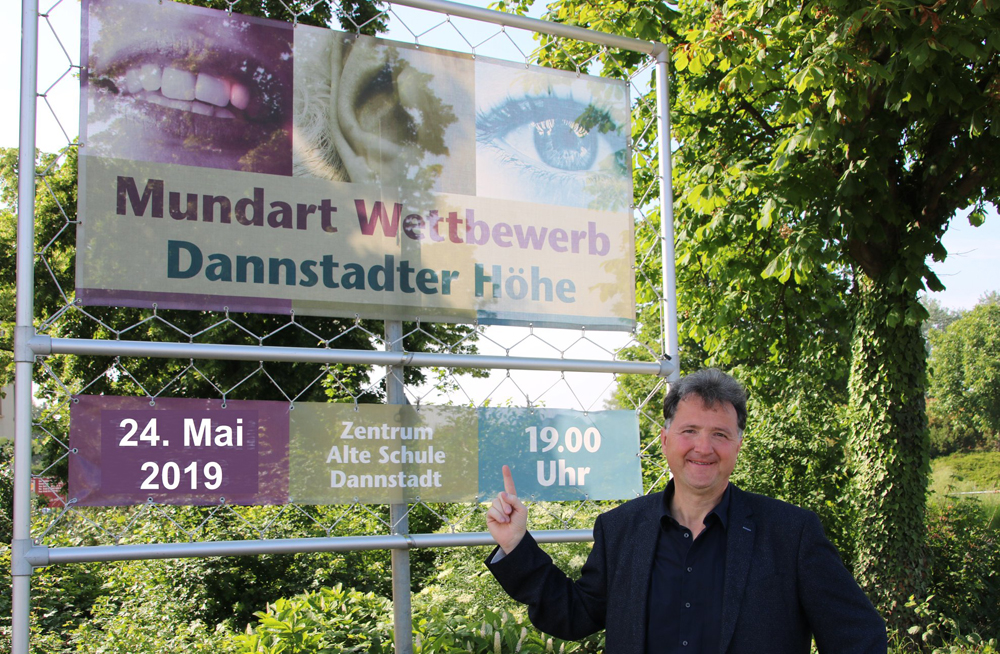 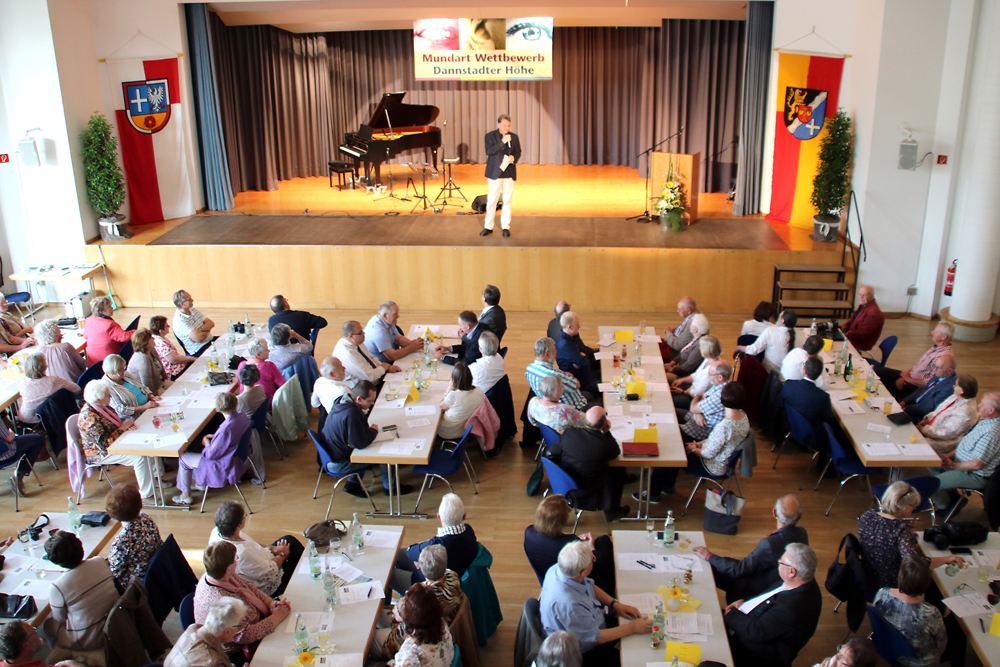 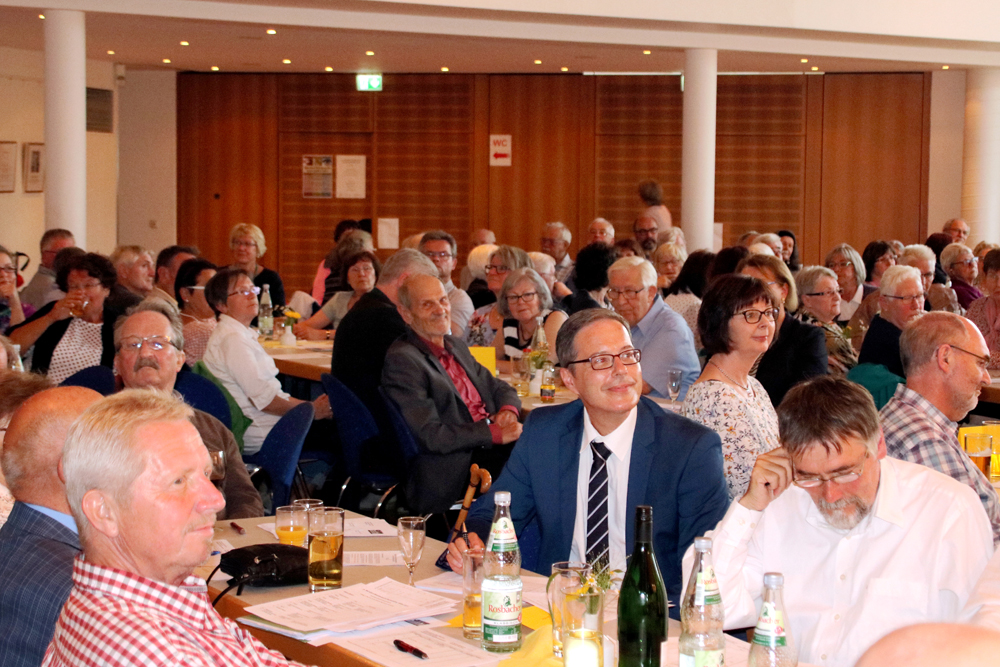 Toni Ostermayer remembers the festivals with pleasure. He used to sing in the ‘Frohsinn Rödersheim’ group and submitted a poem. He had written speeches “für die Bütt” (for carnival) before that: “uff Pälzisch” of course. Toni was born and raised in the municipality. He still lives in Rödersheim, in the parental home. He had left his home region only to undergo teacher training at university and schools. “I ended up in the Westerwald region. They have a pretty dialect there as well,” he says with a smile. He enjoyed comparing dialects and working out words and their origin. “It was there that I realized how deeply connected I was to the Palatine dialect.”

“I have never been able to express myself so emotionally in standard German.”

Toni never tried to write poetry in standard German. “Dialect touches our feelings in a much deeper way,” he says. “I have never been able to express myself so emotionally in standard German.” He writes about personal thoughts and experiences—and usually with humour. But not always: When his niece died in the devastating tsunami in Indonesia in 2004, he used literature to express himself. “This helped me a lot.” And it shows that the dialect competition is rather not about the Palatinate habit of wine-drinking, of “Weck, Worscht un Woi” (bread, cold sausage and wine). 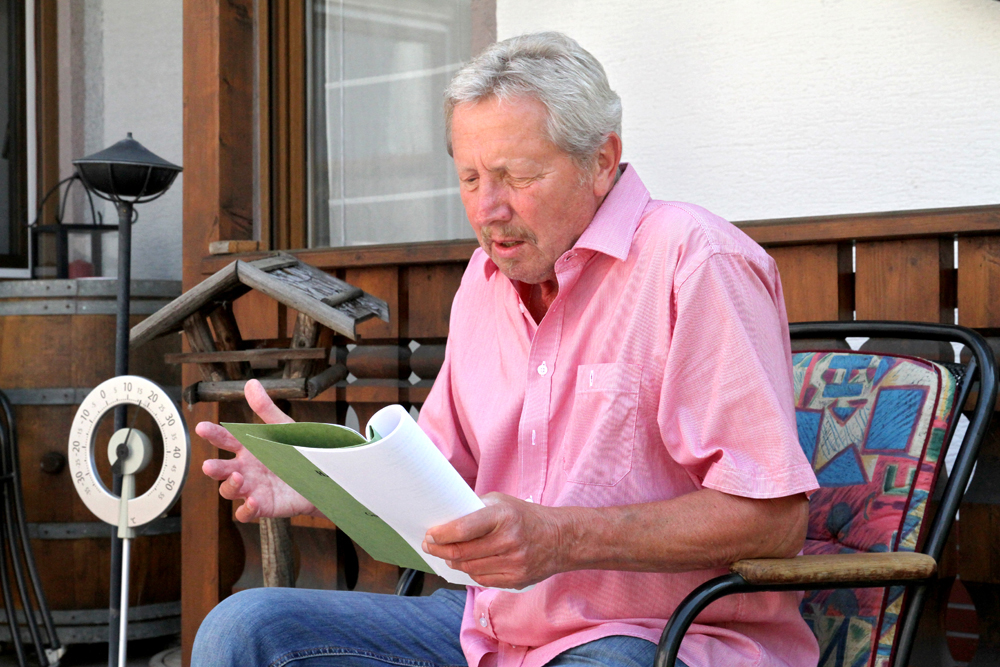 Ralf admires the authors taking part in the competition. “I am stunned at how they use language.” He always finds it hard to classify the texts according to their originality, structure or content—even though he is a teacher and, as such, used to this activity. “I really find it challenging to assess art.” He spends evenings studying the texts until he has determined his favourites. Each of the seven members of the jury selects nine pieces and brings them to the meetings. Since 2018, they have been supported by the winners of the previous competition. “And then we have an extensive discussion.” Opinions can vary pretty much. Each member contributes their expertise. “From the poems, some jury members can even tell from which village an author comes or if he grew up close to the French border and moved to the Electoral Palatinate later.” 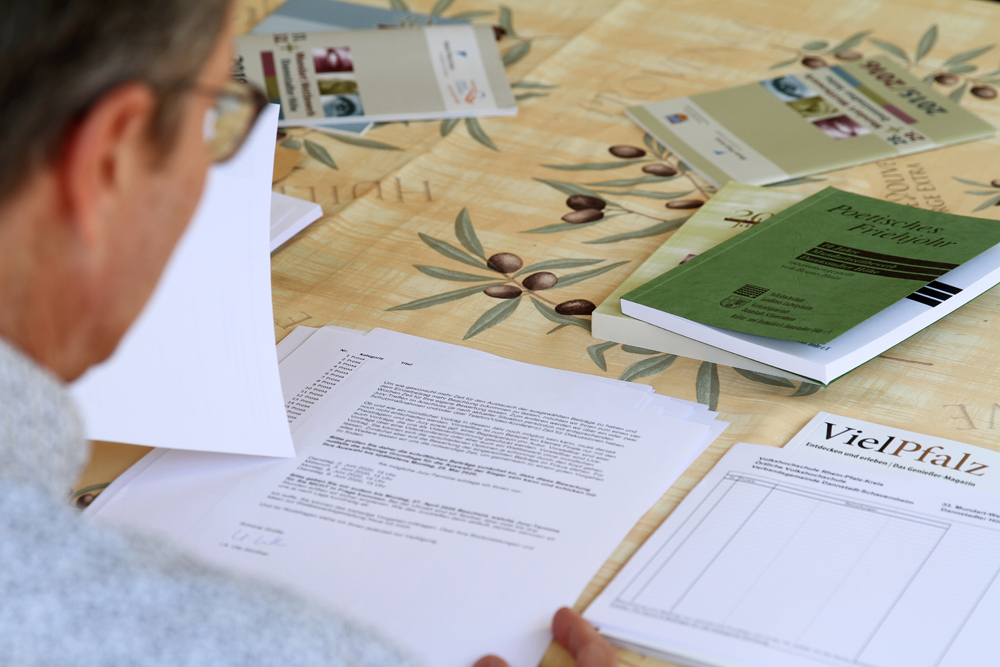 The submitted works come from across the Palatinate and even from beyond.

The submitted works come from across the Palatinate and even from beyond – because the linguistic Palatinate is larger than the geographic one. “Authors come from the Alsace, the Saarland or the Odenwald region,” says Ralf. Theoretically, US-Americans could take part as well: Palatinate immigrants who settled in Pennsylvania still use and foster their dialect – Pennsylvania Dutch. “A world language,” he laughs. 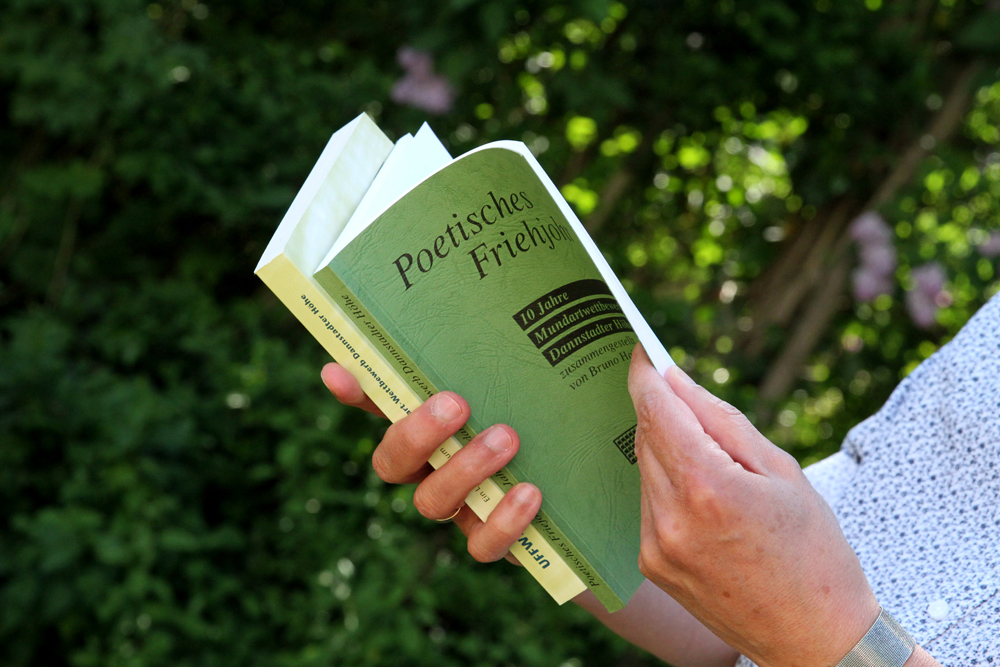 The jury selects its favourite pieces from all submitted texts for the final, which is the core of the competition that takes place in the middle of May. Toni says that “these evenings are very special for us.” The room in the Zentrum Alte Schule location is always crowded and the atmosphere unique. He always looks forward to this time. As well as to his own performance and to directly experiencing the reactions from the audience. “Sure, you write it on paper, however, it is still spoken language and it only becomes alive when performed.” After the performances, the jury meets for the last time, taking them into account for their assessment. “It does happen that the order is changed in the final,” Ralf explains. “During performance, the works are shown to their fullest advantage.” And the audience can also award a price.

The audience can also award a price.

“For me, my dialect is an extension of my language,” says Ralf. “In many cases it is much more precise—particularly when it comes to swear words.” When he was young, he used to recognise exactly when it was time to “listen”: when his parents began to grumble in dialect. His mother is still the first person he consults when he is puzzled by a word in the submitted texts that he is not familiar with. “There are many old Palatine expressions I no longer use in everyday life.” On the one hand he regrets this, one the other it is simply impossible to teach his classes in ‘Pälzisch’.

“For me, my dialect is an extension of my language,” says Ralf.

However, in Dannstadt-Schauernheim, people will know what “Dibblschisser” are and what a “Ferzbeidel” does even decades from now—not least because of Ralf Frohnhäuser and Toni Ostermayer. Asked for their favourite expression, by the way, both dialect users answer after giving it a quick thought: “Alla Hopp.” Toni explains: “There is just no other word as variable as this one.” And Ralf adds: “No matter whether funny or sad: you can always say ‘Alla Hopp’ in any situation.” Even if you don’t have anything to say.