Homeland museums are dull? Not necessarily, as a visit to the Langbein Museum in Hirschhorn in the south of Hesse proves. You can go on a journey following in the footsteps of a passionate collector who appreciated both bizarre and ordinary things—a journey through chambers packed with curiosities that are full of stories. Stories about Hirschhorn and its people, about local wildlife and about a famous visitor: Mark Twain.

The Langbein Museum of local history welcomes its visitors with a hallway that is the first proof of its uniqueness: It shines in a vibrant red colour. The creaking wooden staircase leads to the second floor of the former Hirschhorn forester’s house. The exhibits waiting to be discovered by visitors are already listed on glass panes in the hallway. There is a large number of them. A very large number. And they are listed without discernible order.

The first chamber you enter appears like a muddle as well. Drawings, pictures and deer antlers hang on grass-green walls. Display cases unveil seashells and tools. A mounted pheasant observes you from above. Aloisia Sauer, president of the museum association, smiles and lets her gaze wander. “I have been part of the association since 2018 and have been in these rooms innumerable times. However, I discover something new every time I come here.” Only if you take the time to take a second look, you’ll recognize the ties between the various things, and with each of them you’ll get a more detailed picture of the person who gathered them.

Carl Langbein, born in Hirschhorn in 1816, was an unusual person and an enthusiastic collector. He appreciated things regardless of their monetary value. For him, a beautifully crafted trouser button was as valuable as a painting or piece of furniture. As long as it had a story to tell. About the skilfulness of its creator, the rarity value of the material used or the person wearing the trousers that it used to be attached to. “A warm participant of all beautiful and religious things, of the art and scientific community,” as he characterized himself in a letter. Carl Langbein didn’t spend his time only collecting. He also made drawings, wrote poetry and made music, produced furniture and preserved animals by means of taxidermy. “Today, you’d probably call him a highly talented person,” Aloisia is convinced. 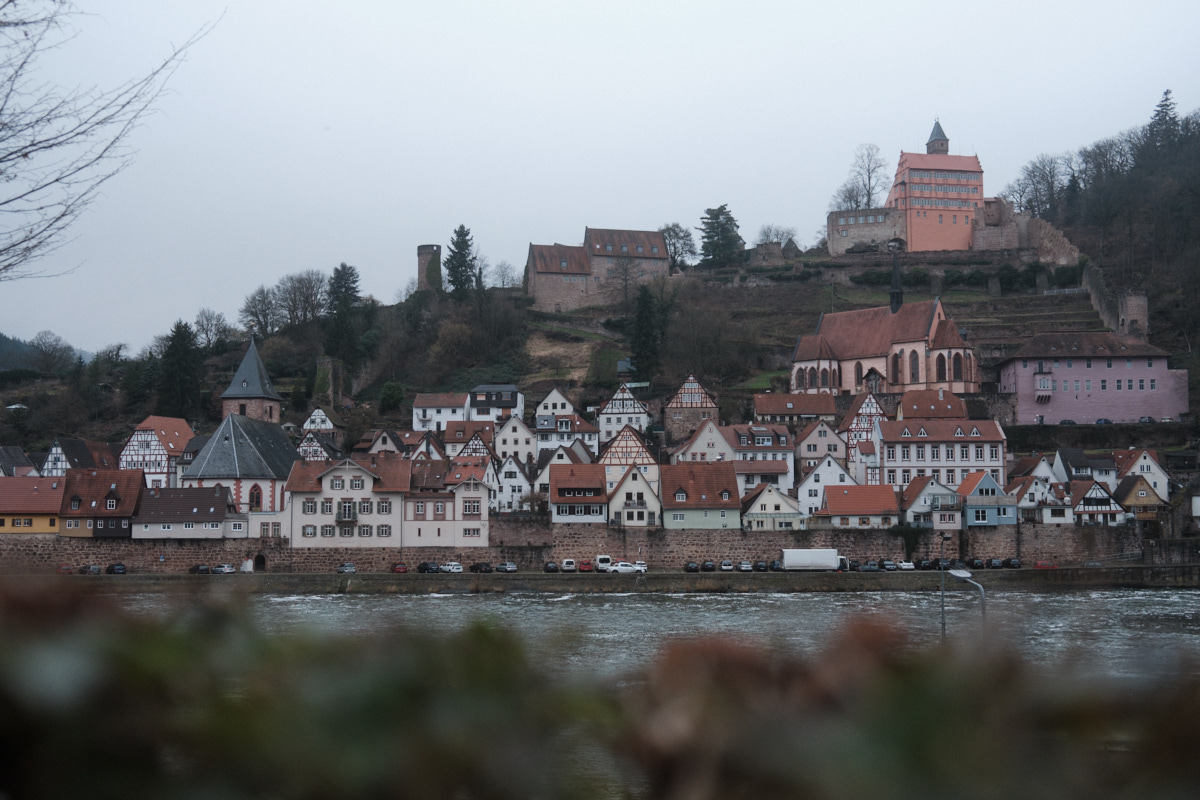 Hirschhorn: the ‘gem of the Neckar valley’ with its half-timbered houses, the town wall and the castle that sits enthroned above it all. 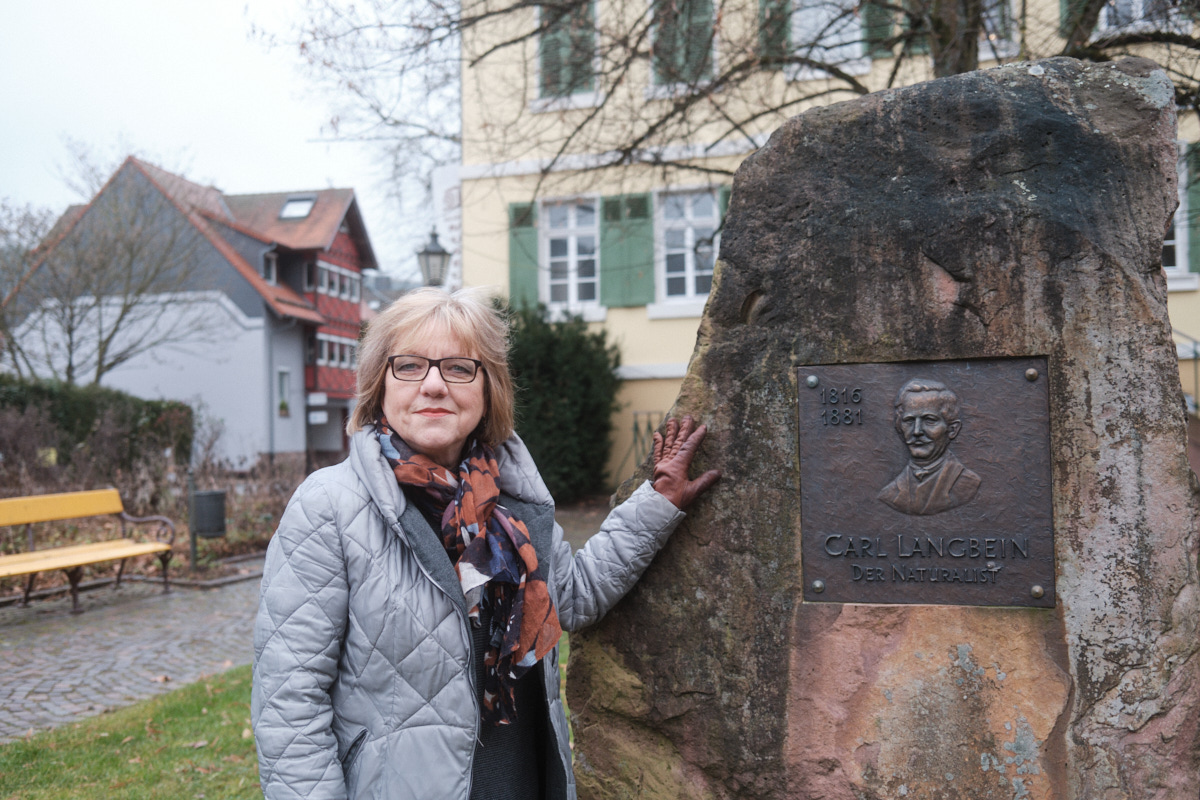 Aloisia Sauer in front of the old forester’s house... 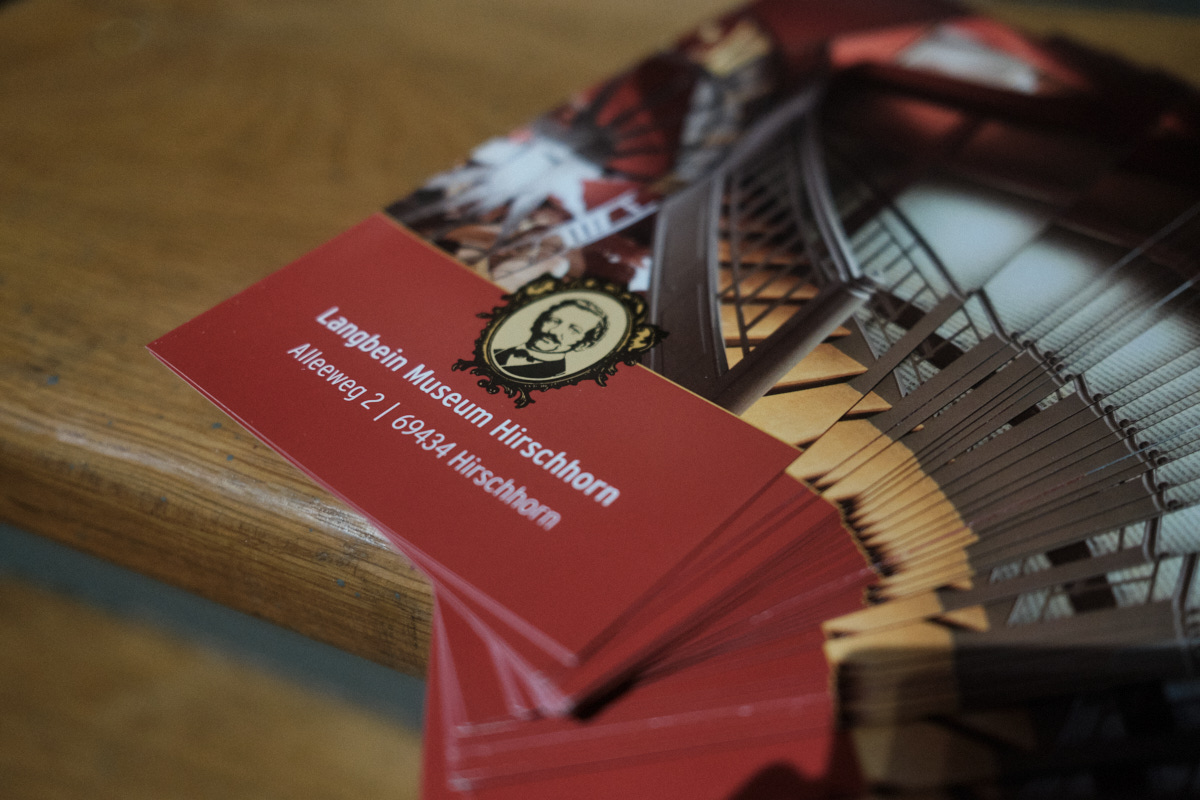 … which hosts the Langbein Museum. 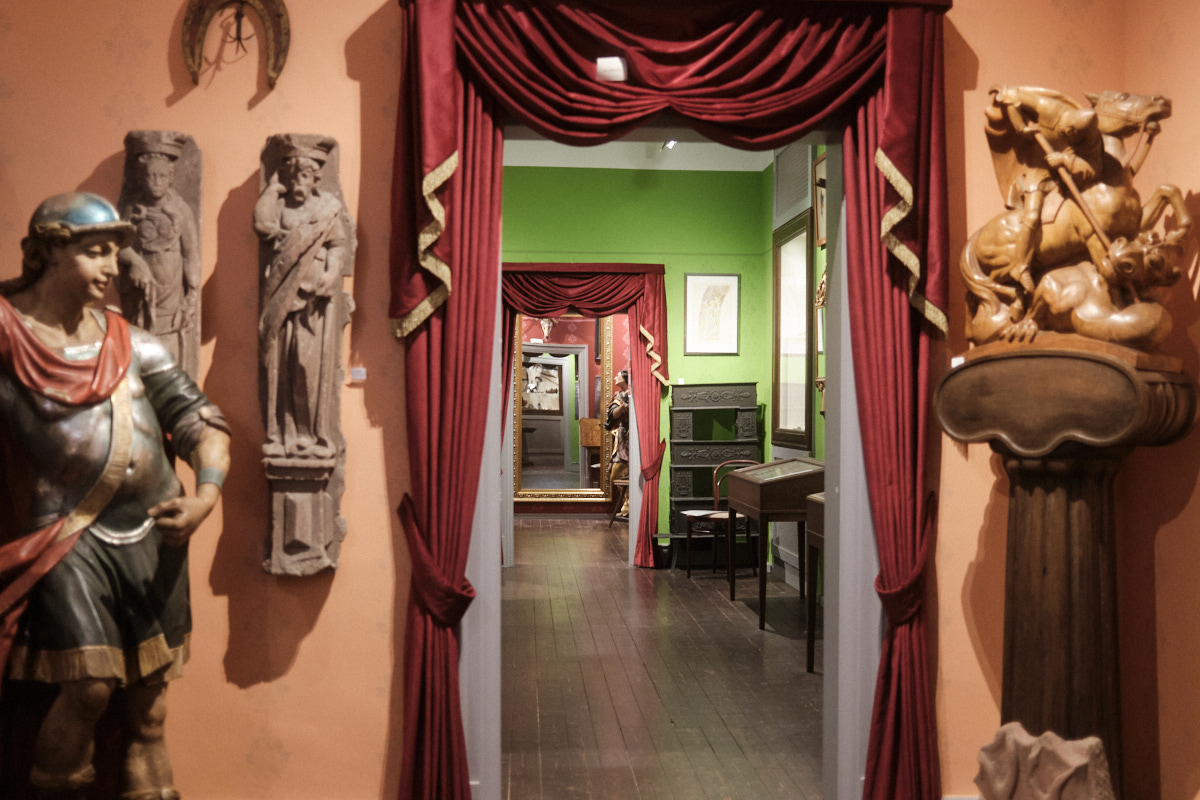 A unique museum of local history.. 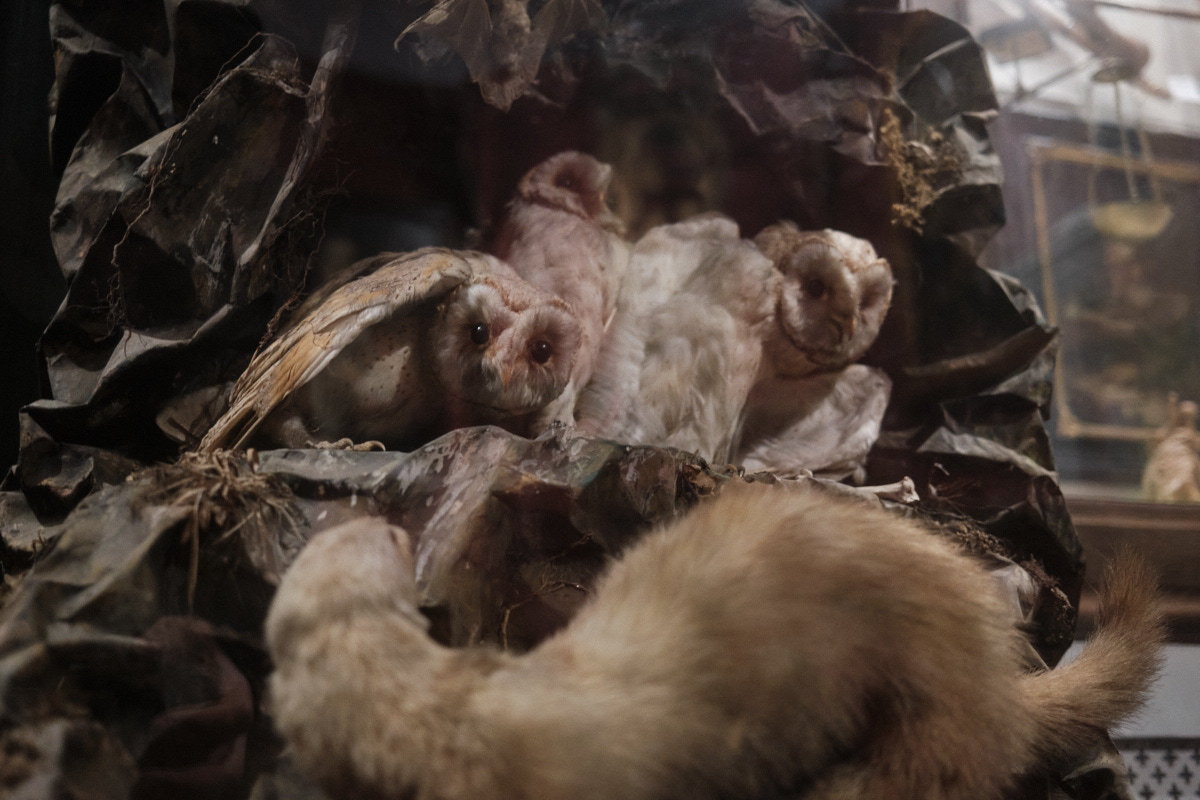 Langbein preserved animals by means of taxidermy—and staged them dramatically. 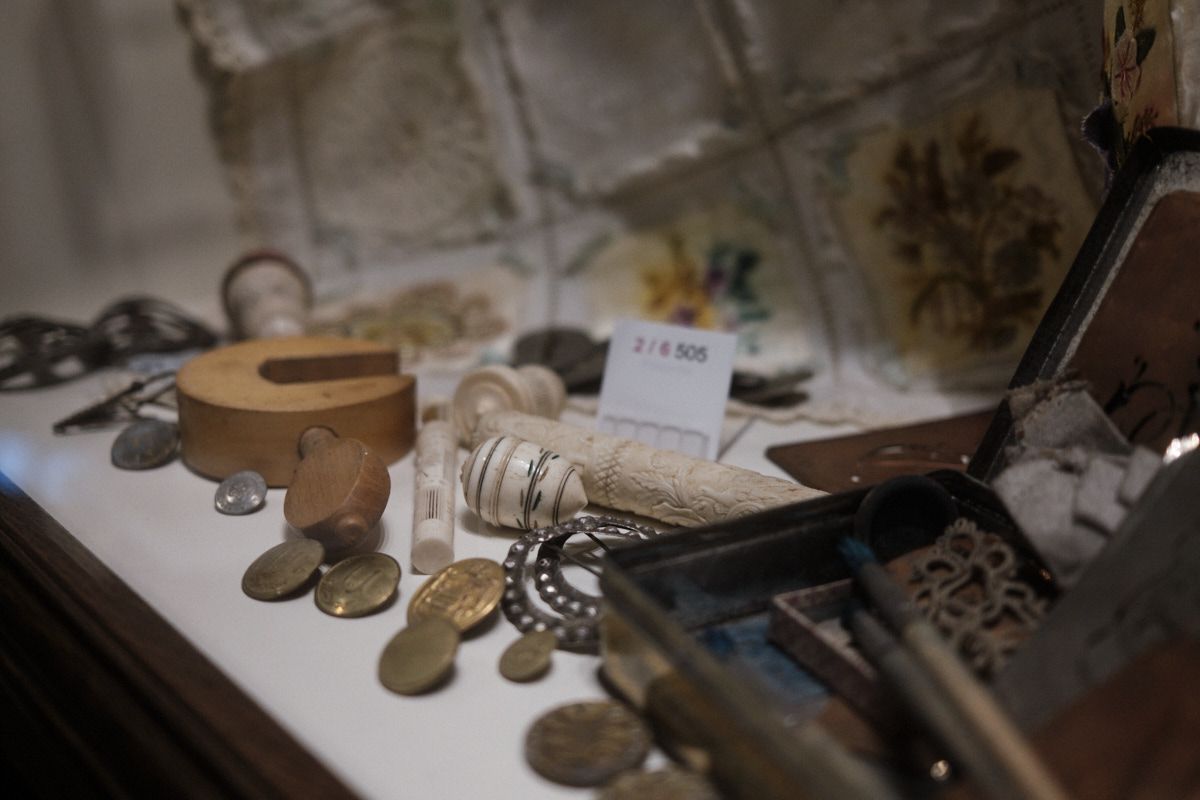 And he found value in even the most inconspicuous things. 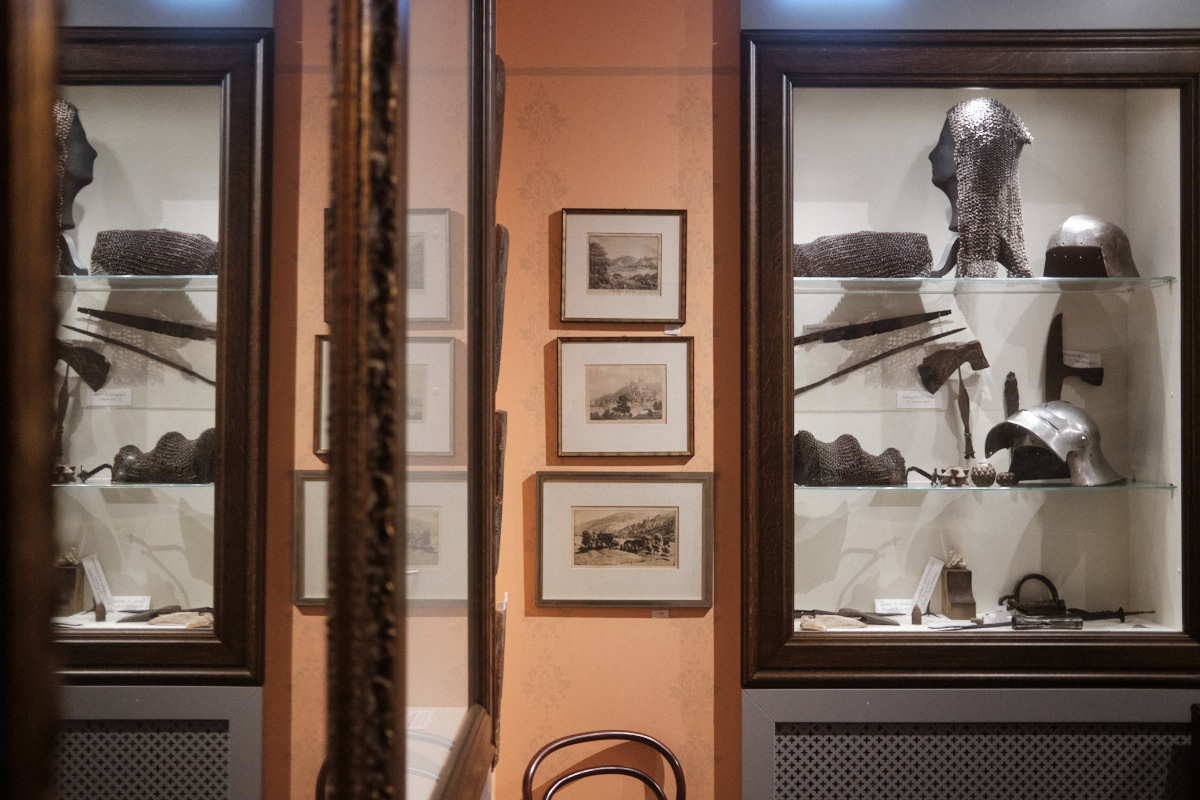 Absolutely nothing was safe from his passion for collection.. 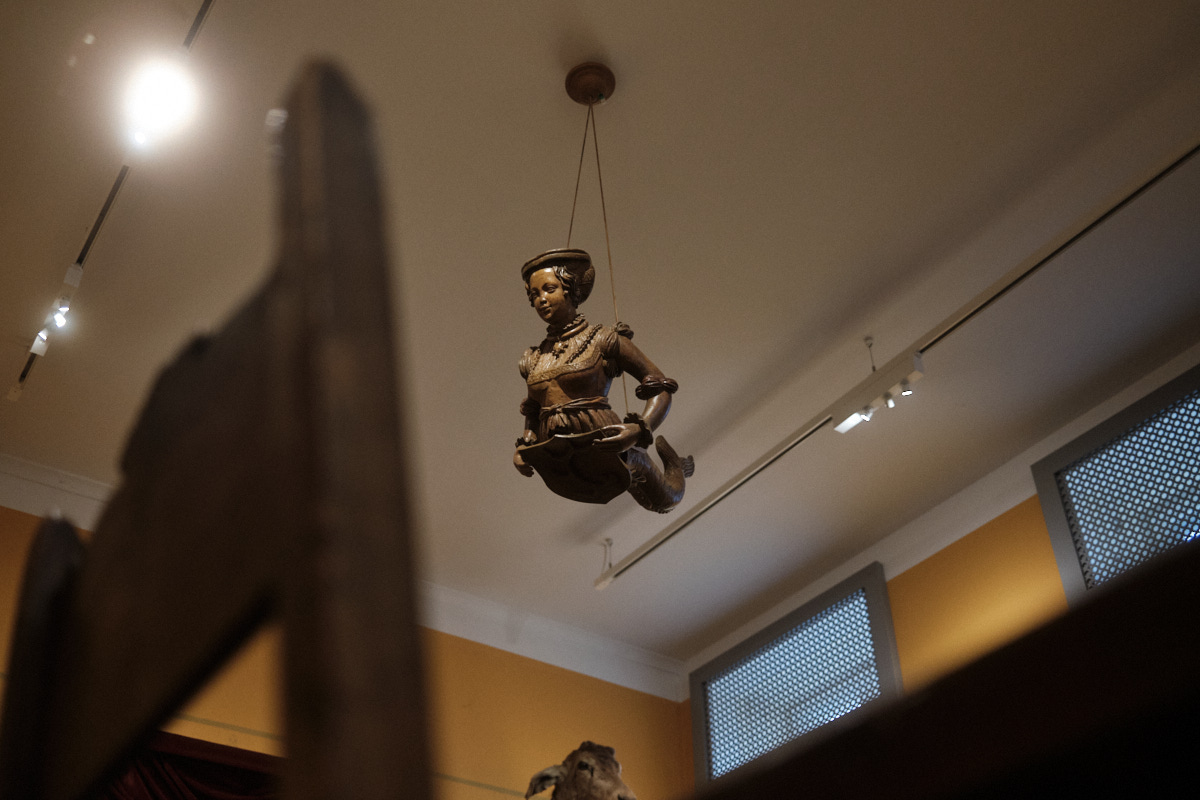 Such as this floating Danube mermaid.

Carl was actually a bark merchant. “Like many locals of Hirschhorn at that time,” Aloisia explains. The little town at the Neckar river—now known as the ‘gem of the Neckar valley’—used to be one of the main places for transporting bark from oak trees. Carl got to see a great deal and brought something home from each journey. And he preserved things from his environment that were in danger of getting lost. In 1840, he acquired the ‘Darmstädter Hof’ inn that was renamed ‘Zum Naturalisten’ back then and would soon look like a museum of natural history. Carl filled chamber after chamber with things while his wife Maria and his sister Ida ran the business. The collection is an incredible treasure

The collection is an incredible treasure

Visitors learn about this fact from Ida herself—from the audio guide who leads them through the exhibition. This audio tour is presented from perspectives of different persons: In some rooms it is Carl or his sister, who lead visitors through the museum. In others, locals of Hirschhorn tell stories about their hometown or children talk about what they experience in the museum and what they find particularly exciting. Even Mark Twain is one of the story-tellers in the audio guide. Apparently he was the most famous hotel guest in ‘Zum Naturalisten’. The author was stranded in Hirschhorn one stormy night on a tour along the Neckar in 1878. He recorded this stay in his work ‘A Tramp Abroad’ in a satirically pointed way, including the story about a mounted owl that caused him trouble falling asleep. It seemed to stare at him the entire night “with the expression of a person, who believes to know you, yet can’t remember for sure.” The snow-white owl still sits in the museum today—continuing to look thoughtful.

Carl left a colossal legacy behind for the locals of Hirschhorn. “The collection is an incredible treasure. However, the question remains: Just how can you exhibit it?” How to present a fragment of a vase next to a knight’s amour? Carl was fortunate to have a person in town who understood him: Dr Ulrich Spiegelberg, a paediatrician and an enthusiastic amateur historian. He chaired the museum association for many years and thought out a fundamental concept for the museum together with the exhibition designer Jörg Werner. They wanted an exhibition that combined both bizarre and ordinary things applying the ‘chambers of curiosities’ concept: An underlying topic is assigned to each room in the museum. “On guided tours, we ask the visitors to guess the respective topic,” Aloisia says, because this makes most of them look for—and find—correlations and associations between the exhibits.

But a number of small or big question marks emerge as well, making visitors raise questions. And this is what we intend. How is the elephant’s ear connected to Hirschhorn, for instance? “It was tanned—with bark from an oak tree,” Aloisia explains. And what purpose does the deer without antlers serve in the chamber with the religious objects? “This deer actually lived in the local forests of Hirschhorn. Despite not having antlers the stag led a herd. These specimens are called ‘monk’.” The museum holds many surprises like this one and lots of insights and humorous correlations. For this reason, it is no accident that the oil painting showing Electress Palatinate Elisabeth Auguste hangs on the wall crookedly…

Some of the glass cabinets in the exhibition are empty. They are an invitation for visitors to think for themselves about what could fit in there, because the collection is meant to grow and continue to preserve the history and stories of Hirschhorn. Such as the one about the large wooden table that used to stand in the Carmelite monastery just below the castle. Or the knight’s amour and arms that are reminiscent of the great era of the Herren von Hirschhorn dynasty that once even owned the little village of Mannheim.

Aloisia herself is still an enthusiastic visitor to the museum. She grew up in Hirschhorn and returned here in 2014. Back in her hometown, she joined the museum association rather by coincidence. At that time, the association was urgently looking for someone to become the vice president. When they told her she wouldn’t have to do more than attending a few meetings, she finally gave in. At the end of the day, she was inspired by Dr Ulrich Spiegelberg’s enthusiasm—so much so that she even took over as president when he died unexpectedly in 2018. “We miss him a lot. It is a big, a huge task to succeed him in his work,” she says. She doesn’t even intend to keep up with his achievements. “I simply lack the historical expertise,” she admits. As a business consultant, she made a different objective become her task: She wants the museum to become the museum of the people of Hirschhorn and wants to attract many more visitors. “I think many locals aren’t aware that we have a real gem here.”

A wooden model of a castle placed at the end of the exhibition shows that Carl even tried his hand at architecture. Just an illusory dream? “No, he even started to build it,” Aloisia explains. The castle was meant to become his exhibition house. But it was never completed. After Carl had died, his sister Ida took care of his legacy. She made sure that the collection would remain complete and eventually gave it to the State of Hesse. Aloisia tells us about further chests and boxes—an archive full of potential exhibits. “We have a long way to go until we’re through,” she laughs. “I am so curious to find even more treasures and stories!”

You can easily get to Hirschhorn from Heidelberg by S-Bahn. It is located along the ‘Kurpfalzachse’ cycling route, which is one of the three Regionalpark routes exploring the region. 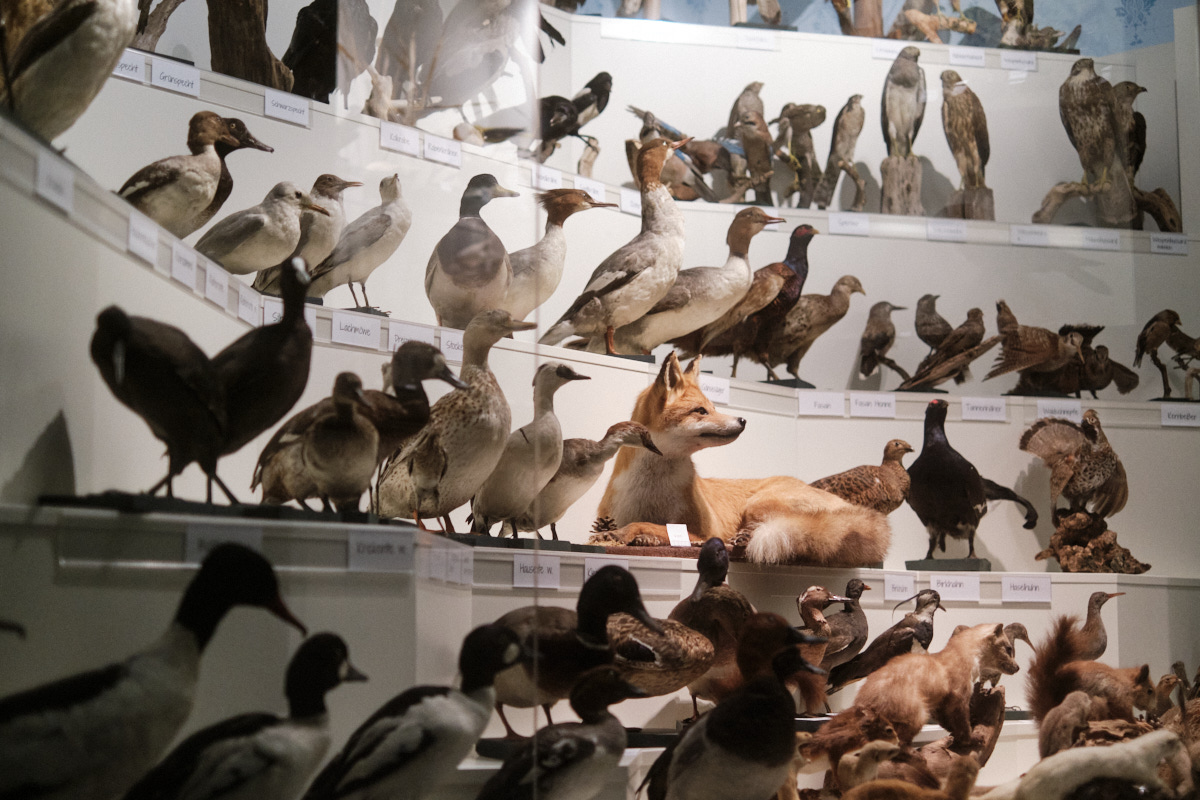 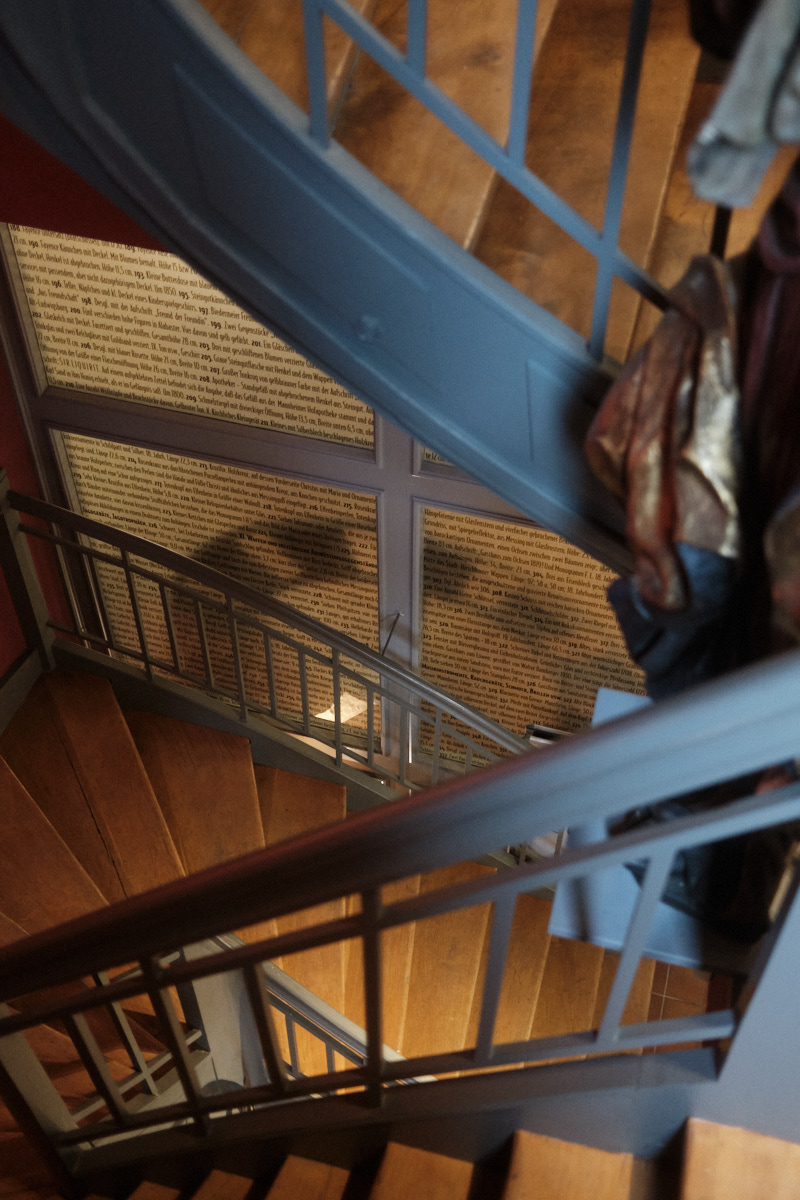 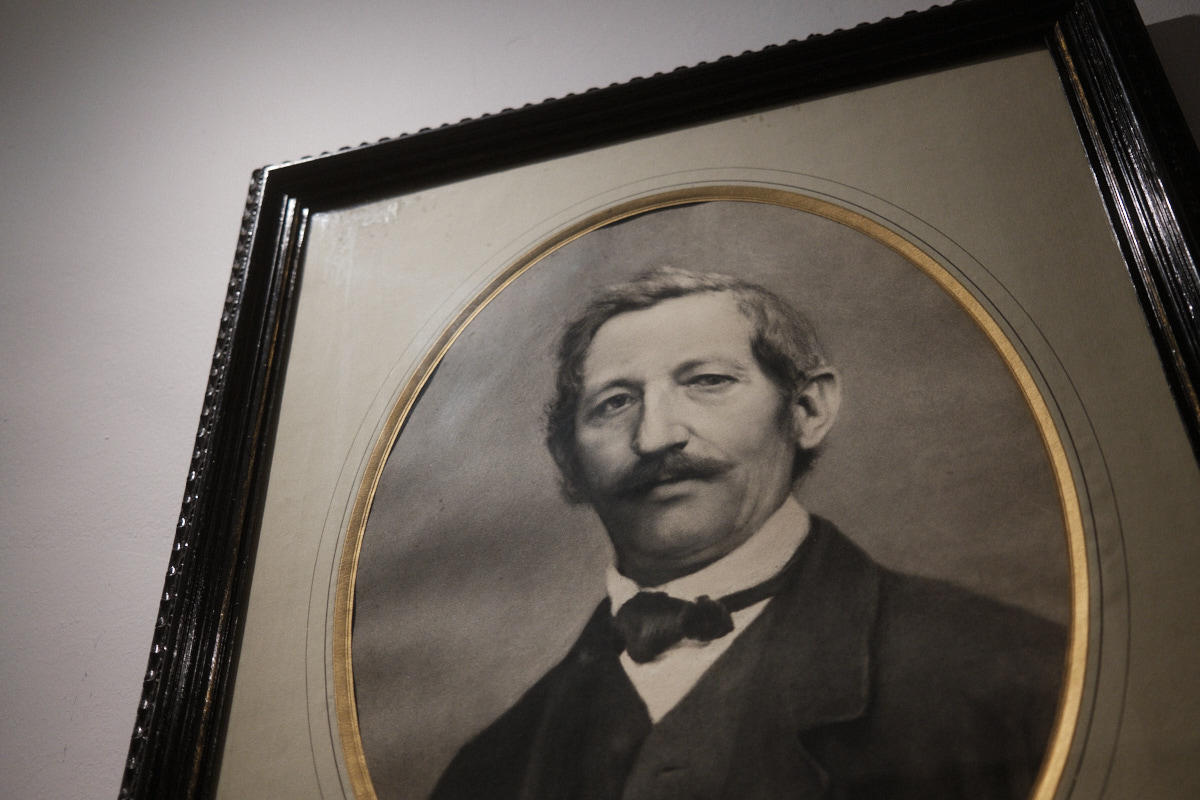 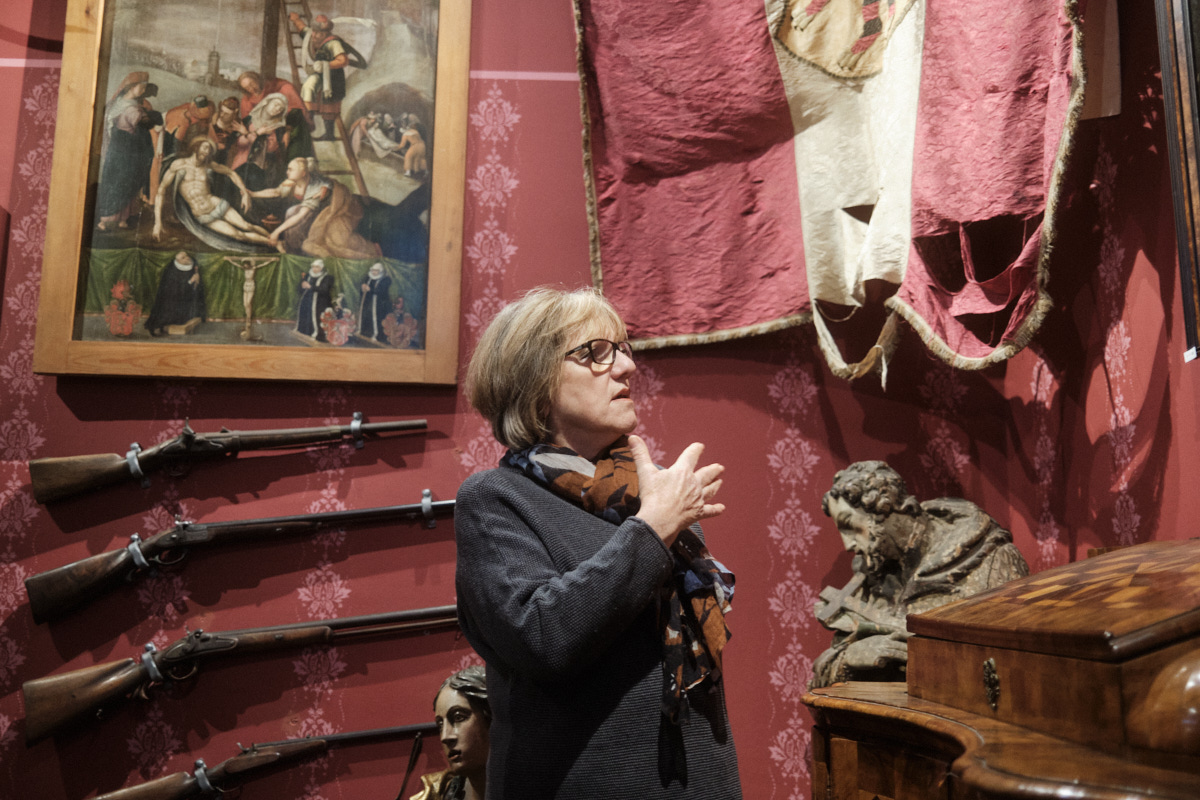 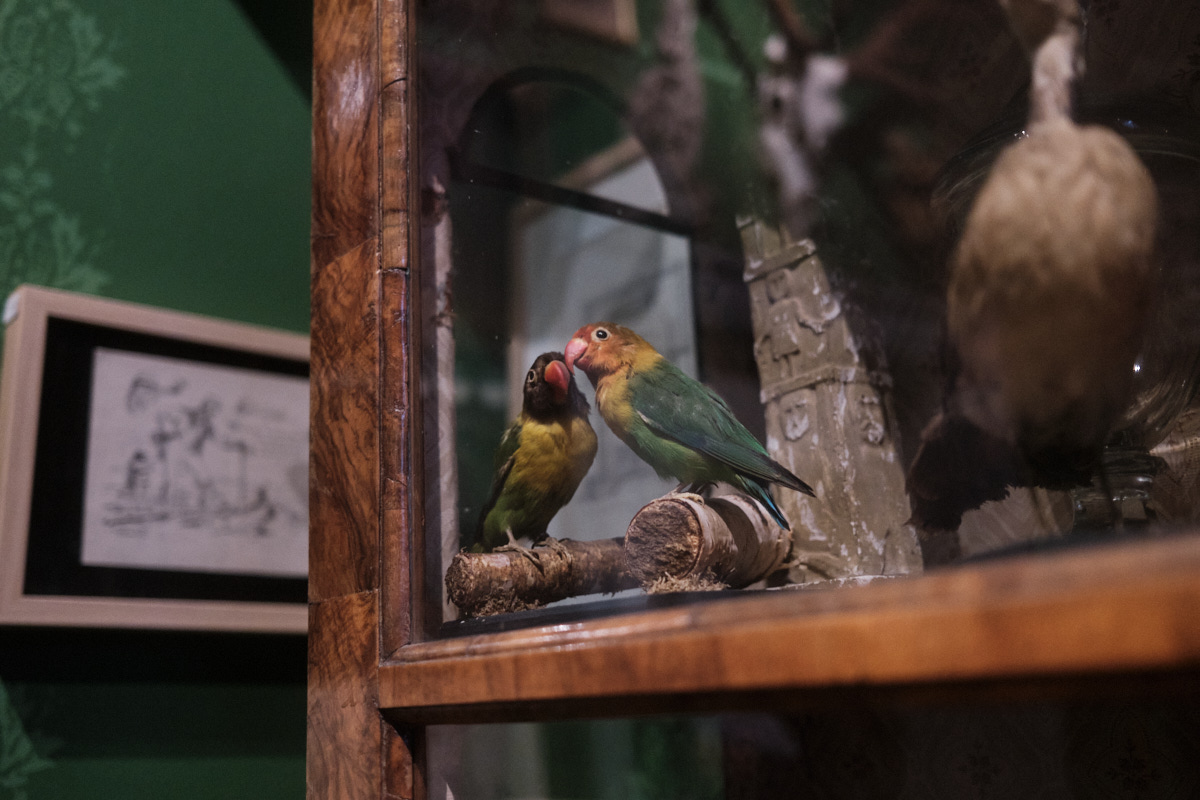 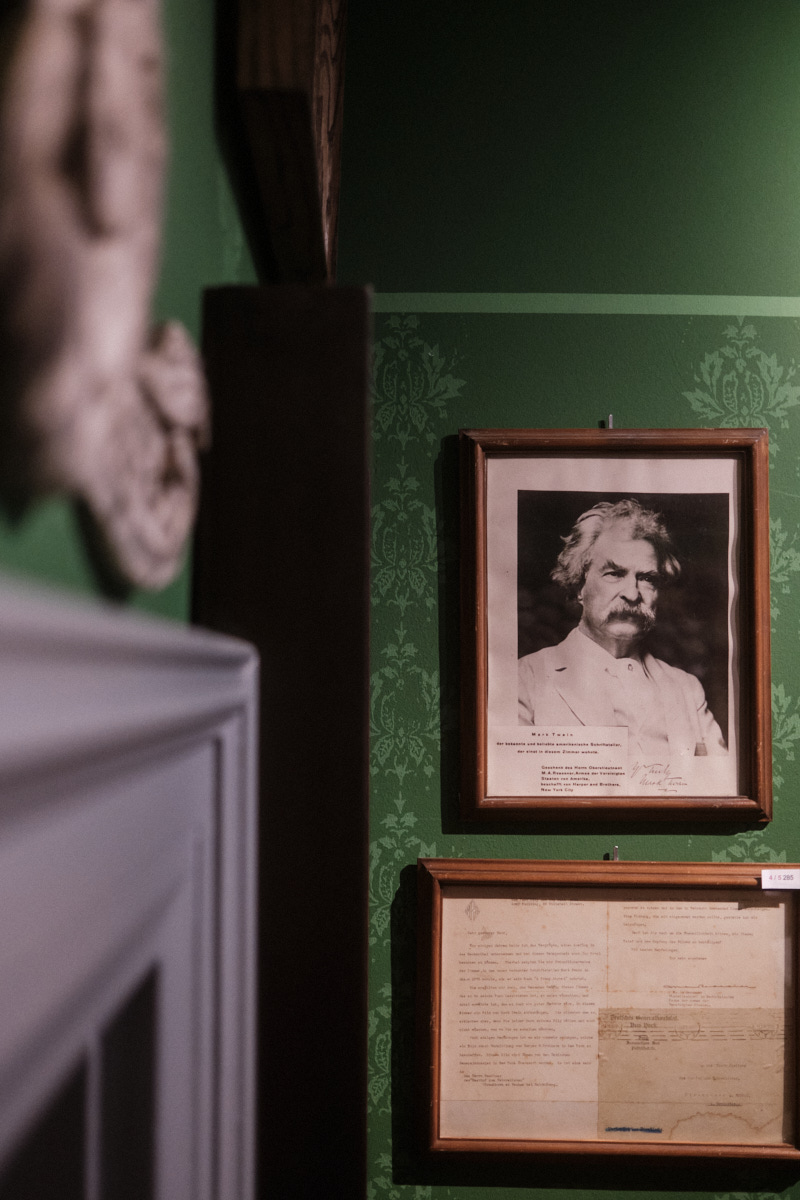 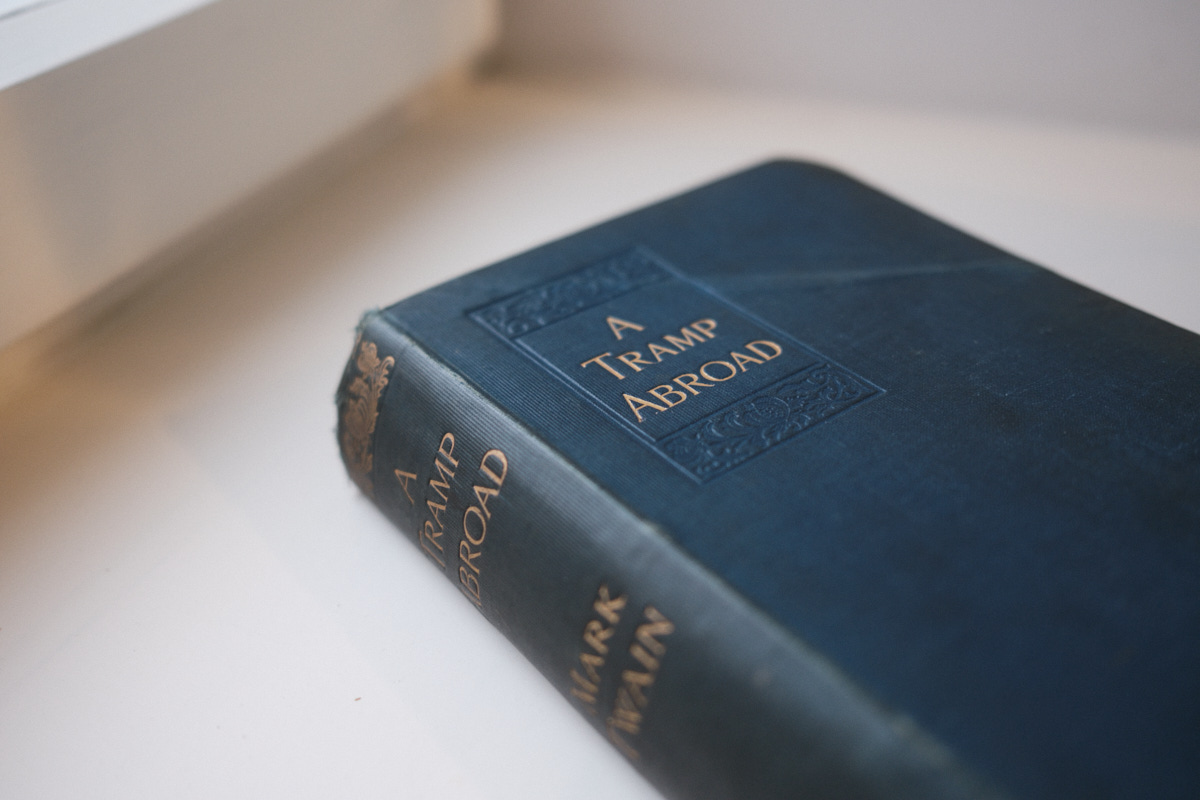 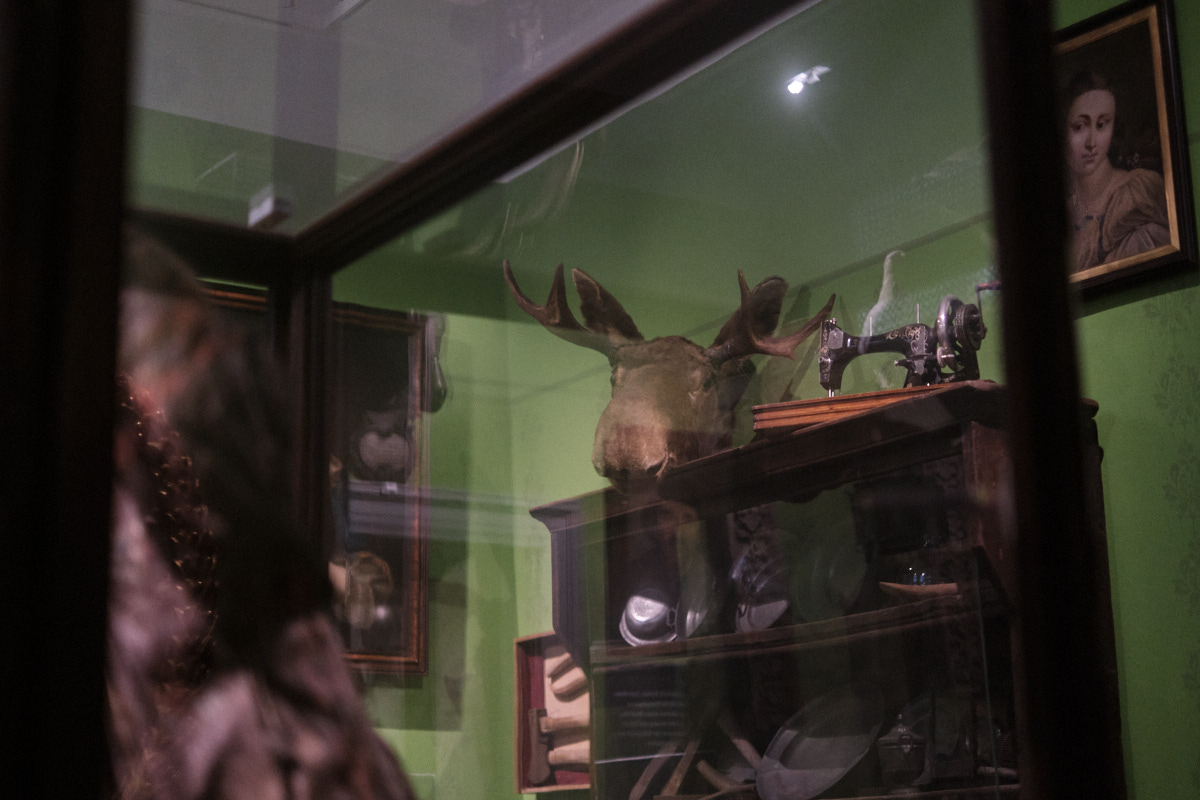