Curtain Call for the ‘Olympia’

The villagers of Hirschberg-Leutershausen have saved their old village cinema from downfall—with lots of commitment and attention to detail. This place is not only a destination for nostalgia addicts.

As a youngster, Renate Keppler-Götz had to wash the dishes on Sunday afternoons. Afterwards, she left home and went to the cinema, in the hope of arriving punctually at 2 p.m.. The only seat left was usually that uncomfy tip-up seat at the end of the aisle. But even from there, she could easily plunge into the world of cowboys and Native Americans that was projected onto the screen. The Winnetou movies brought the Wild West to the Bergstraße road.

Wiebke Dau-Schmidt (left) and Renate Keppler-Götz. It is thanks to the two women’s commitment that you can continue to watch movies in Hirschberg-Leutershausen.

If everything in Hirschberg had gone the way it has in many other small towns, there would be no motion-picture palace in the town anymore. The ‘Olympia’ cinema opened in 1952 as a “practical new building,” as the press called it, in what today is the Leutershausen part of town. But the picture palace blossomed out to become quite a small institution. It left its mark on an entire generation of film enthusiasts. A number of emotional foundation stones for love affairs and long-lasting marriages were laid in rear rows of the seating area. 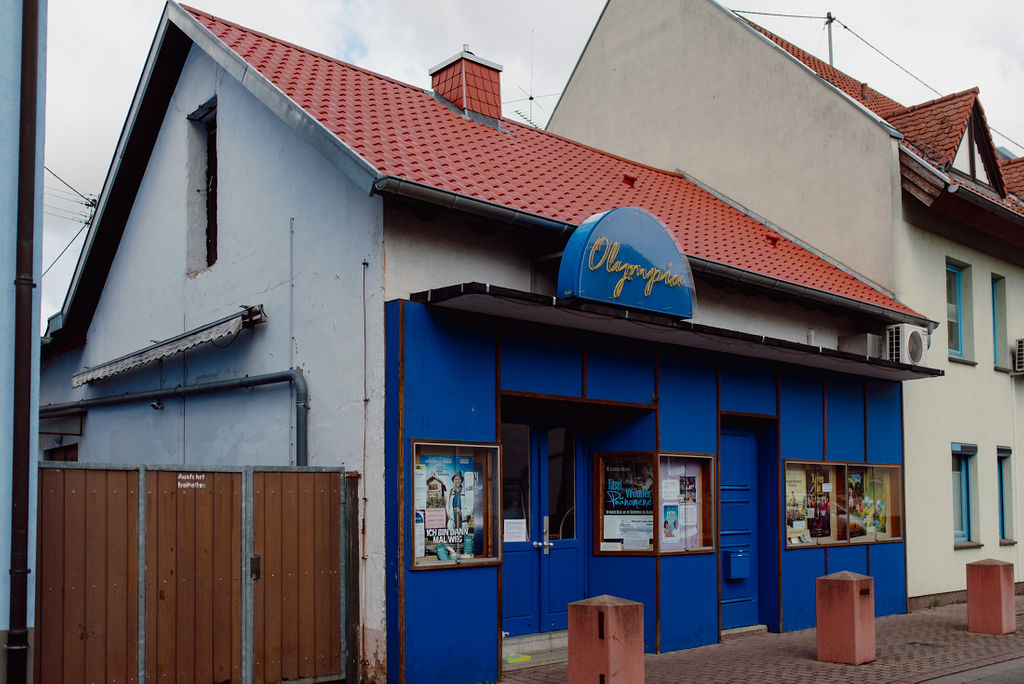 The ‘Olympia’ is one of the region’s last village cinemas.

The front of the low building located at Hölderlinstraße is painted in a dark blue tone today. ‘Olympia’ glistens in curved writing above the door. The tickets are available at the desk in the little box office—exactly as it used to be. A machine at the side provides popcorn and straight in front is the cinema hall. Wiebke Dau-Schmidt and Renate Keppler-Götz stand here waiting—behind them there is a weighty, red curtain covering the screen and in front of them extend the aisles with their wide, red armchairs. Old wall lamps bathe the room in soft light. The little hall has never lost its charming atmosphere despite some adjustments that had to be made to it while history evolved. The walls’ coverings are now made of low-inflammable cloth, for reasons of fire protection. The old plastic seats from the days of Renate’s youth were replaced by cosy, soft armchairs providing lots of legroom. 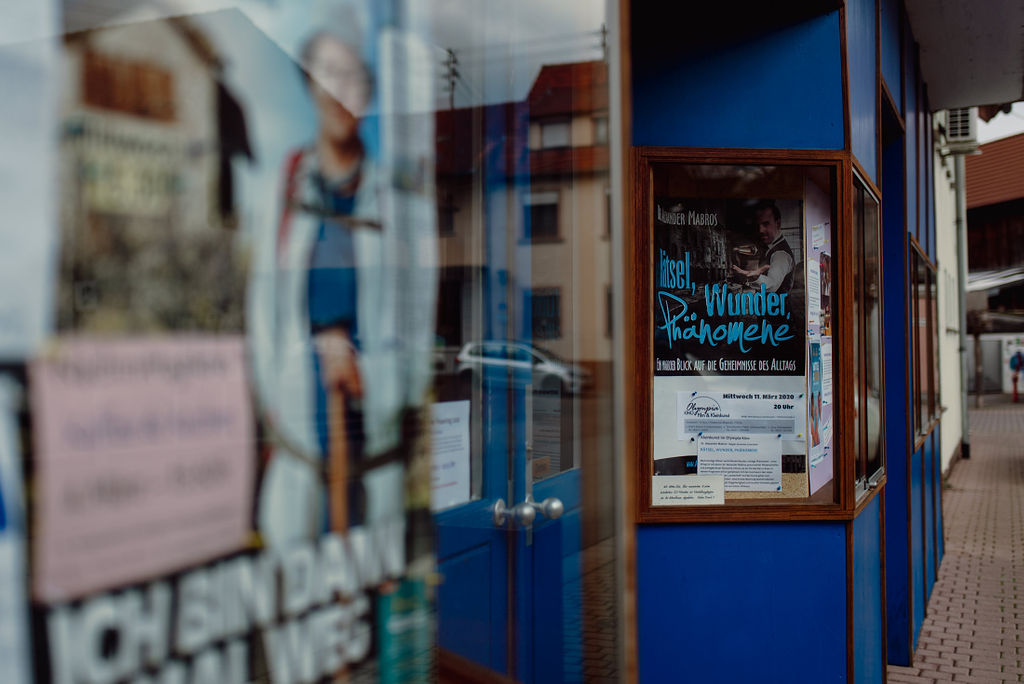 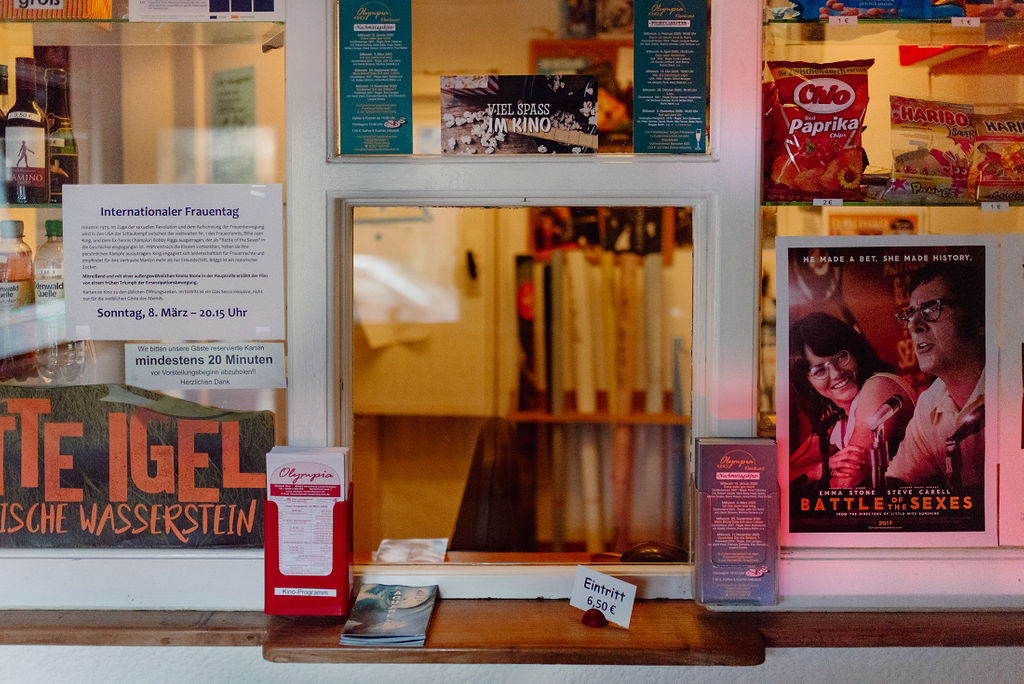 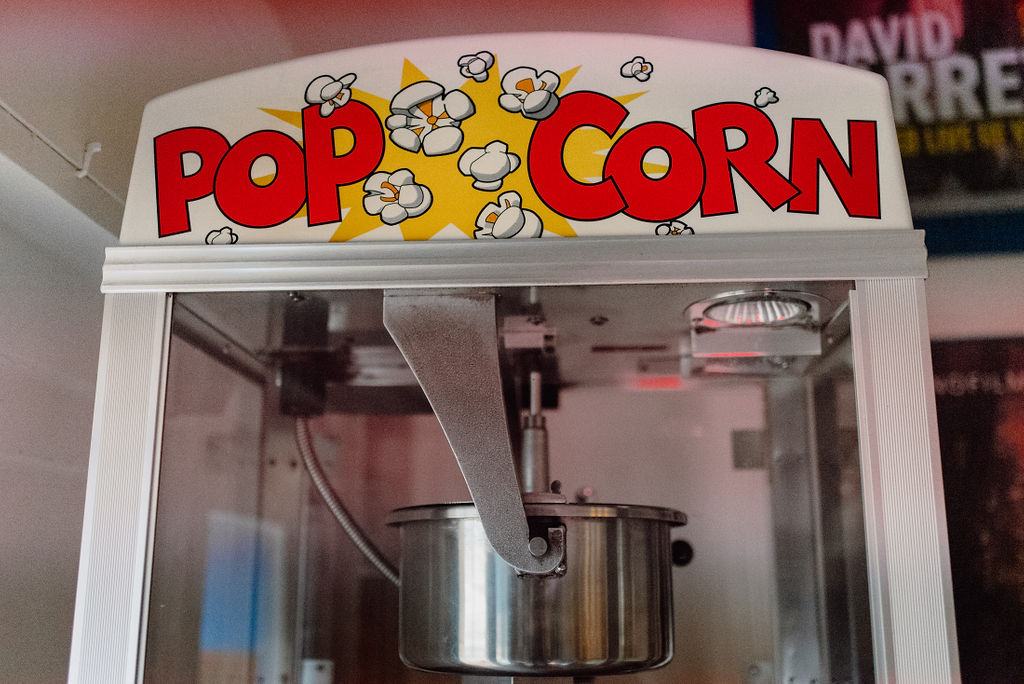 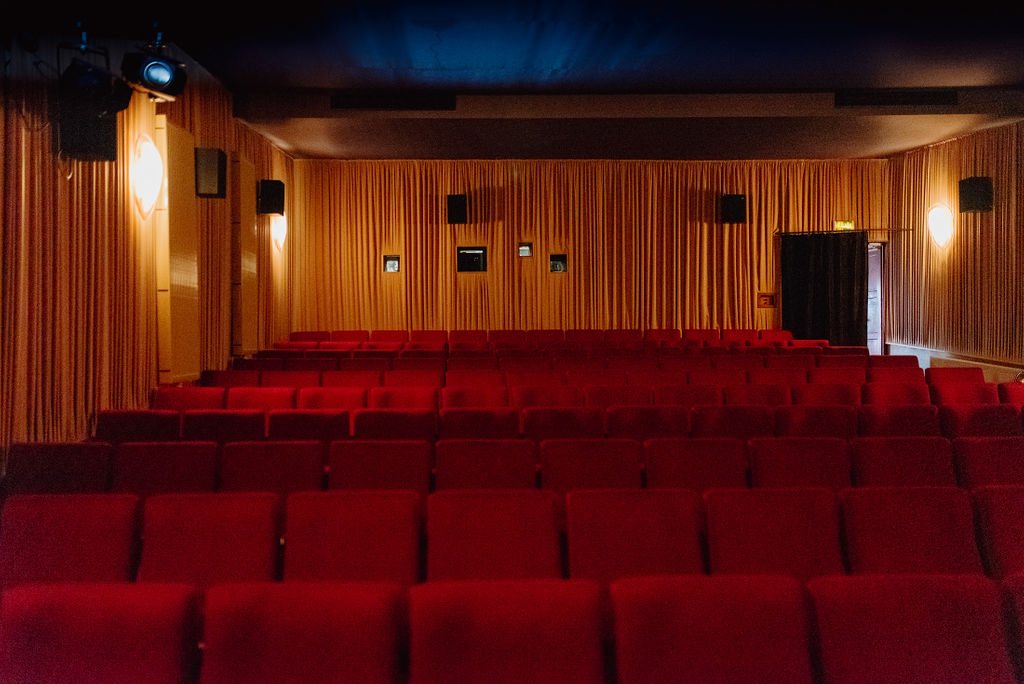 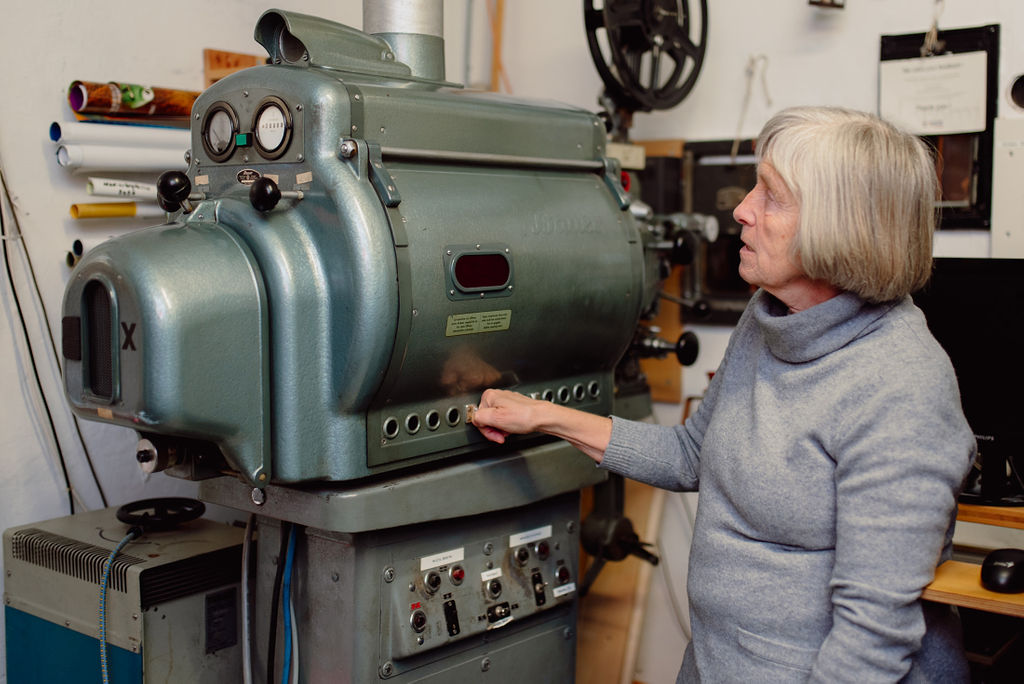 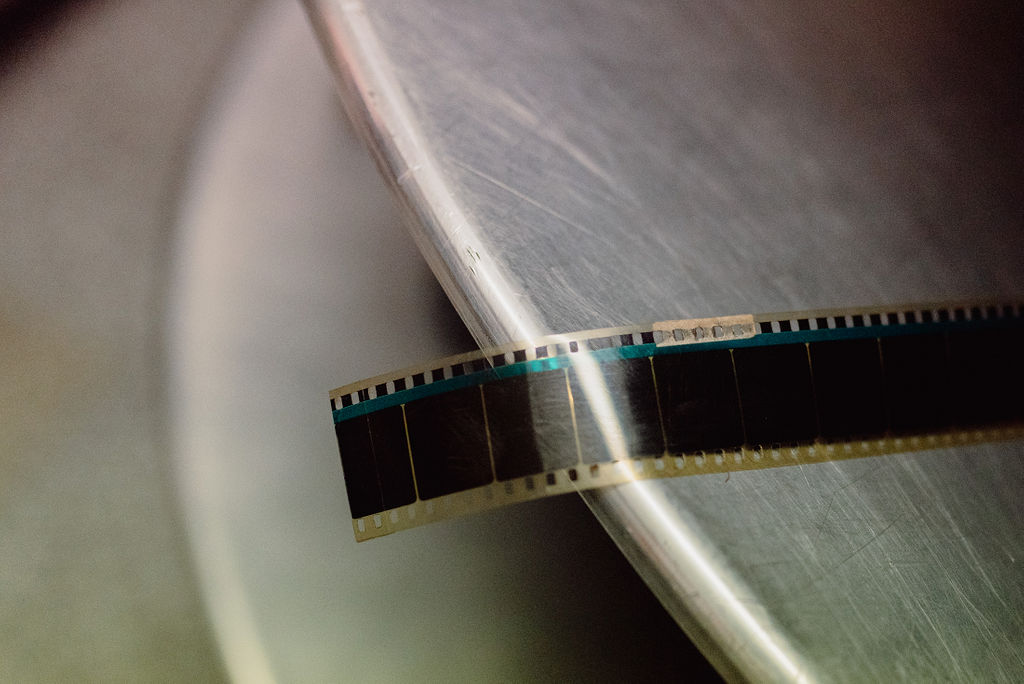 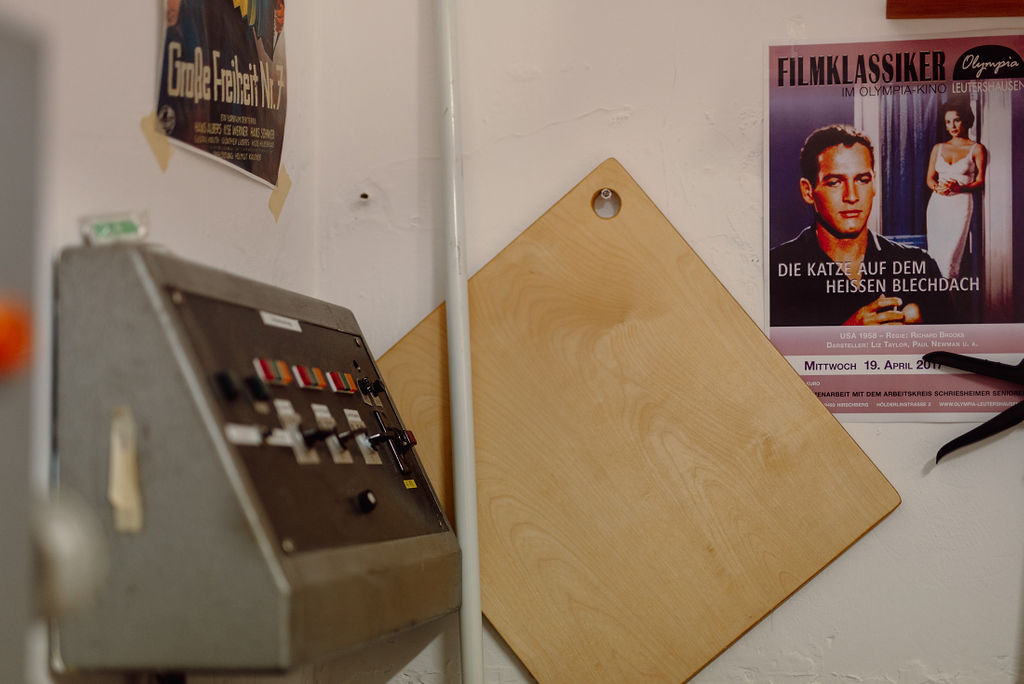 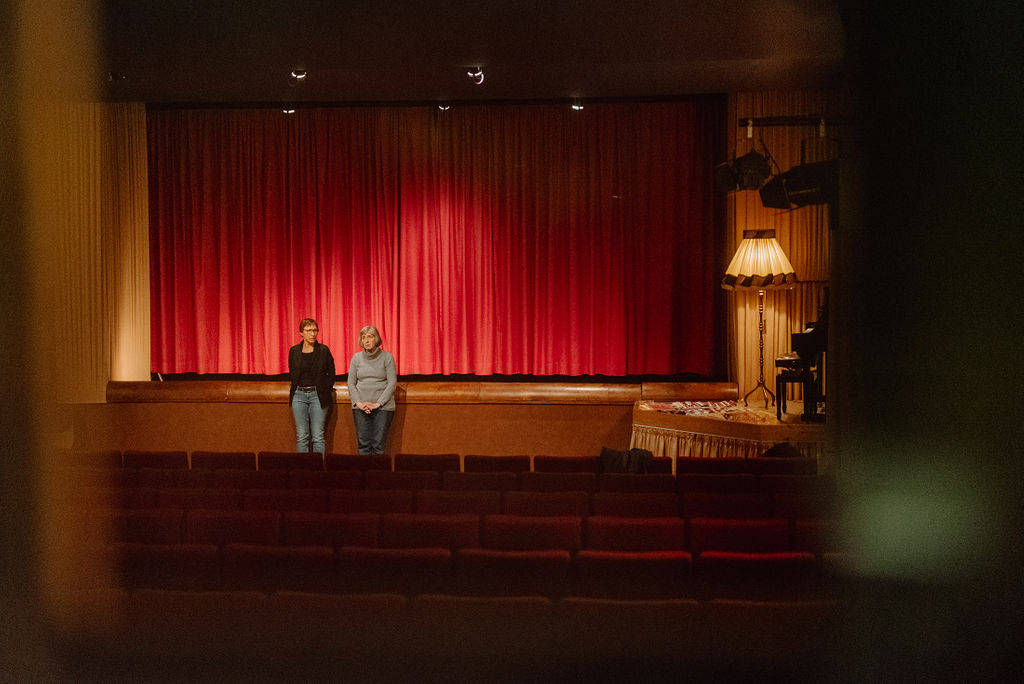 It is thanks to the two women’s commitment that you can continue to watch movies here. The institution went through some hard times in the 1990s—it was the time many people became curious about the huge, big movie experience in the newly opened multiplexes. “We couldn’t believe that we should be the only ones, who loved this cinema,” says Wiebke. She came from Schleswig-Holstein to the Bergstraße region for love and was fascinated by Leutershausen—this lively village. This led to her becoming one of the founders of the Förderkreis Olympia-Kino support group in 1997, which officially became a club in 2000. The club members launched signature-collecting and fund-raising campaigns, had film guide flyers printed and organized cabaret events. The number of cinema-goers increased. Then, a new operator changed the programme and the number of visitors to the Olympia decreased. In 2007, the cinema faced the chop again—regardless of the former success story. The club made a logical move: it took over the business.

Suddenly running a cinema business: „It’s a little bit like the first child“

Wiebke and Renate had to dare a leap in the dark and suddenly began running a cinema business. “It’s a little bit like the first child,” Renate says, “you don’t know what to expect.” Fortunately, the club always could and can rely on the technical expertise of experienced projectionists and the support of its members. Volunteers sit in the box office, distribute flyers and design posters. If the income generated by ticket sales doesn’t cover the expenses, the club falls back on membership subscriptions. The municipality would also help out in the case of difficulties. 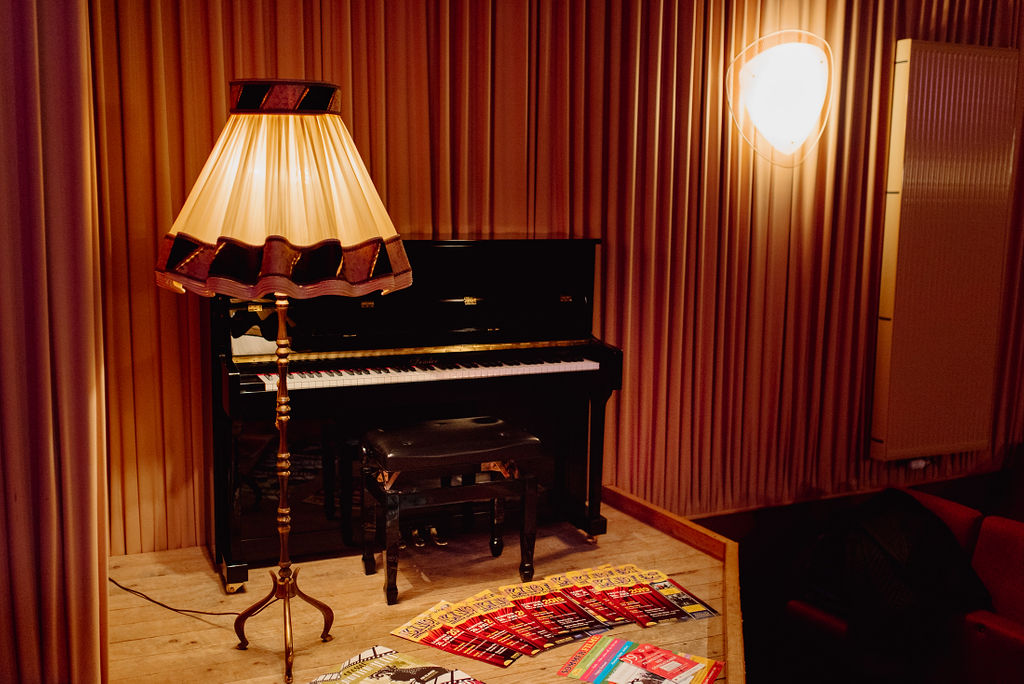 A ticket for adults is 6.50 euro, 3.50 for children. Hirschberg locals appreciate their cultural institution, no matter whether there are only a handful of people in the hall, or whether all 130 seats are occupied. There are some 21.000 visitors per year. They particularly frequent the events that offer more than just the movie experience. The “Schlemmerkino” (feast cinema) offers a multi-course menu and music before film showing. In the afternoon events, coffee and cake is served during the show. And the regular silent movie shows are enhanced with improvised music by Hirschberg pianist Jens Schlichting, who sits on the little stage next to the screen—for more than three hours if the movie requires it, such as did “Woman in the Moon” by Fritz Lang. Every two months, the club uses the Olympia for a cabaret series—without movies, but featuring cabaret artists, jazz musicians or chansonniers. “We realize lots of beautiful ideas, because we enjoy maintaining the cinema,” says Renate.

The skilled gymnastics trainer gave up her profession after her third child was born and she is now dedicated to her great passion: cinema. Just as dedicated as Wiebke, who was a grammar school teacher until she retired. The two chairwomen of the Förderkreis Olympia-Kino club also assist with the movie choice. They don’t want a customary selection, Wiebke explains. An occasional blockbuster such as “Fack ju Göhte” and classics show in Hirschberg as well, but the overall orientation is that of repertory cinemas. “And we make the choice a little bit according to our personal preferences as well.”

In Hirschberg, movies don’t show at the time they are released in the rest of Germany. They are shown a bit later: “We dilly-dally behind the other ones,” says Wiebke. This results in a Hirschberg cinema programme that includes movies that went down a treat elsewhere. And if you missed out on a particular film, you can always come to the Bergstraße region and find what you were looking for.

Renate Keppler-Götz in the little technical equipment room with its old projector.

Some visitors are interested in the little technical equipment room with its old, greenish-grey projector and the big machine with roundish plates for the large film rolls. The projectionists had to glue various rolls together at a specific table by hand, to make them one film. They don’t need this equipment anymore today. Nowadays, the films come on large hard disks to Hirschberg, or even directly via the internet. But in the Olympia, they don’t want to part with the apparatus—it shaped the story of this place too much. 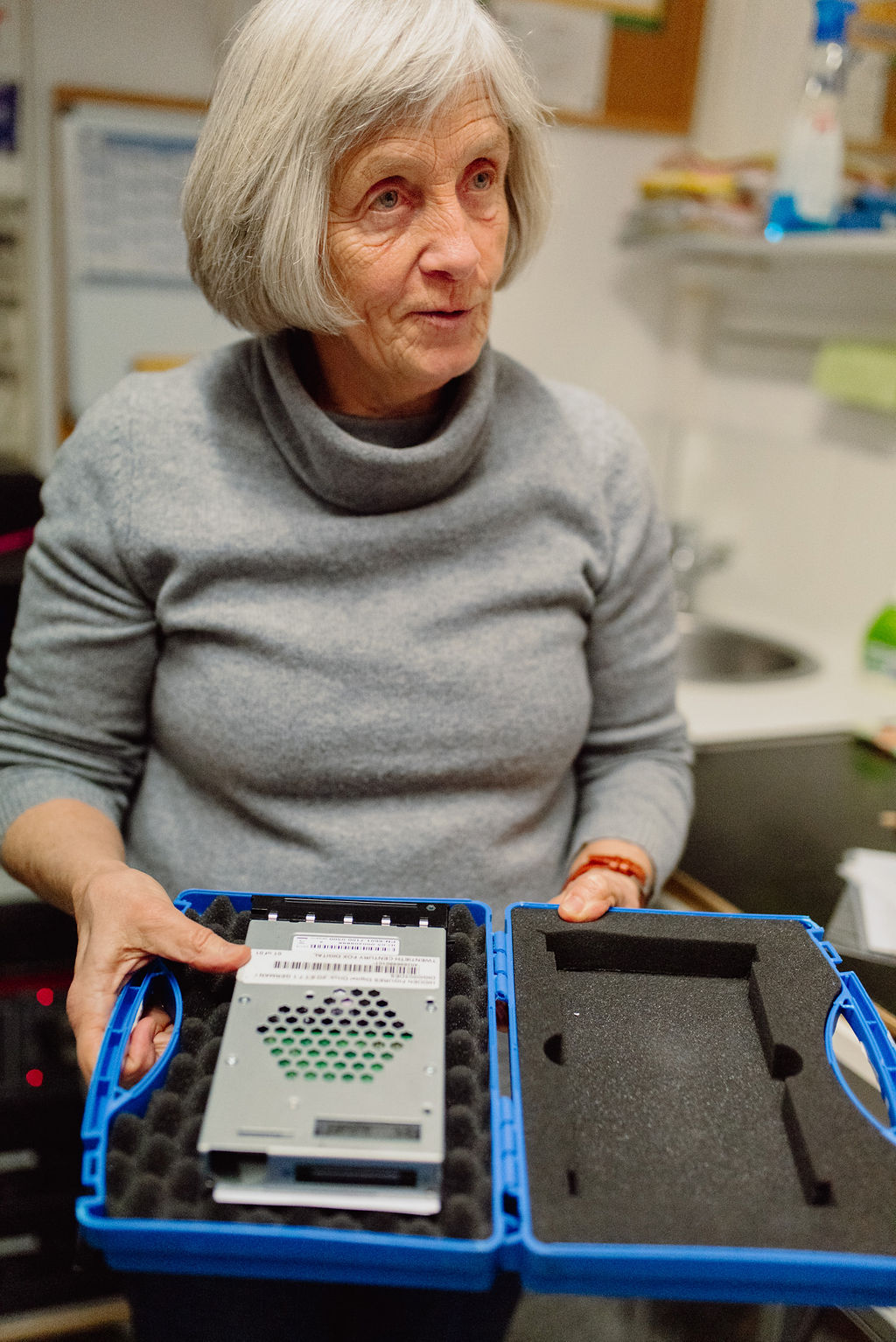 Nowadays, the films come on large hard disks to Hirschberg.

And what about the future—particularly in this day and age where viewers use streaming services to choose from an infinite amount of movies and series to watch in their living room? “People want to meet and have a community to share the experience with,” says Wiebke. “We hope this will also be true in the future.” 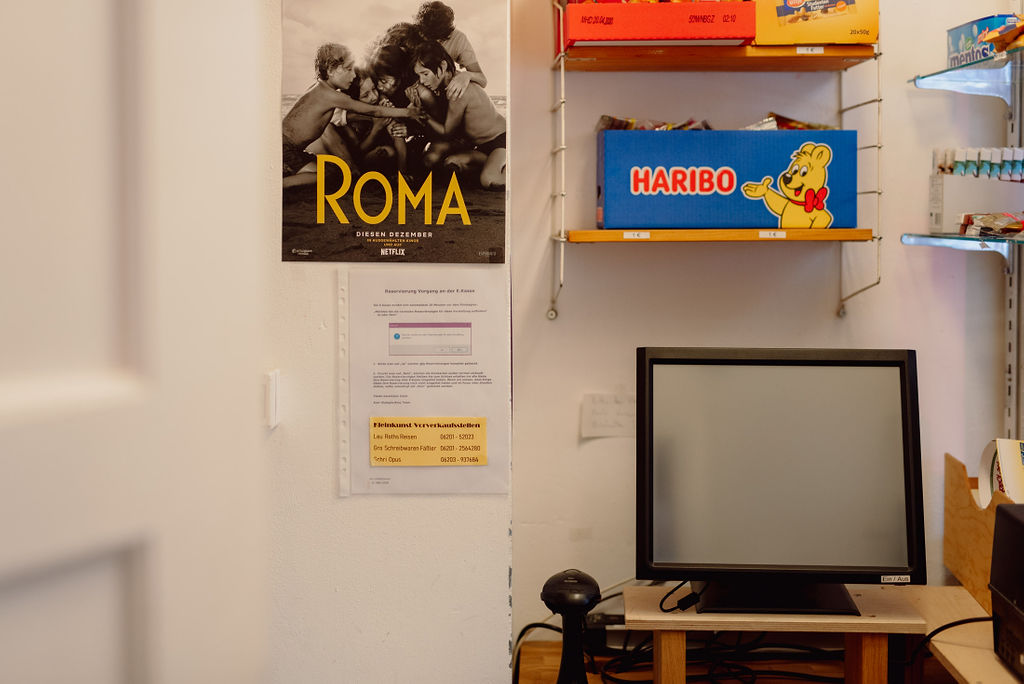 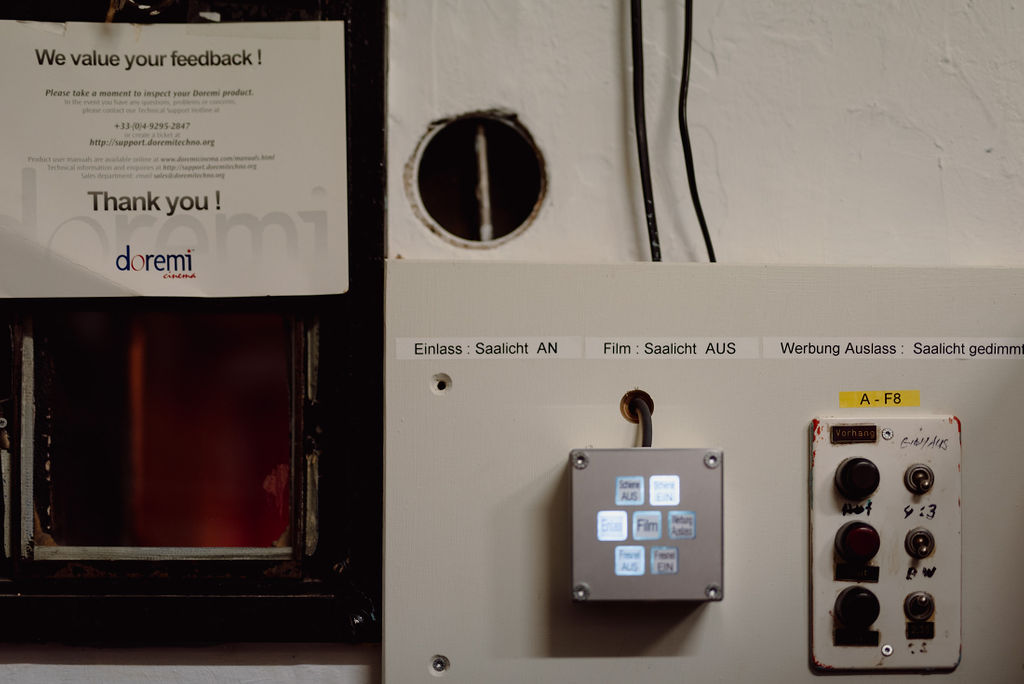 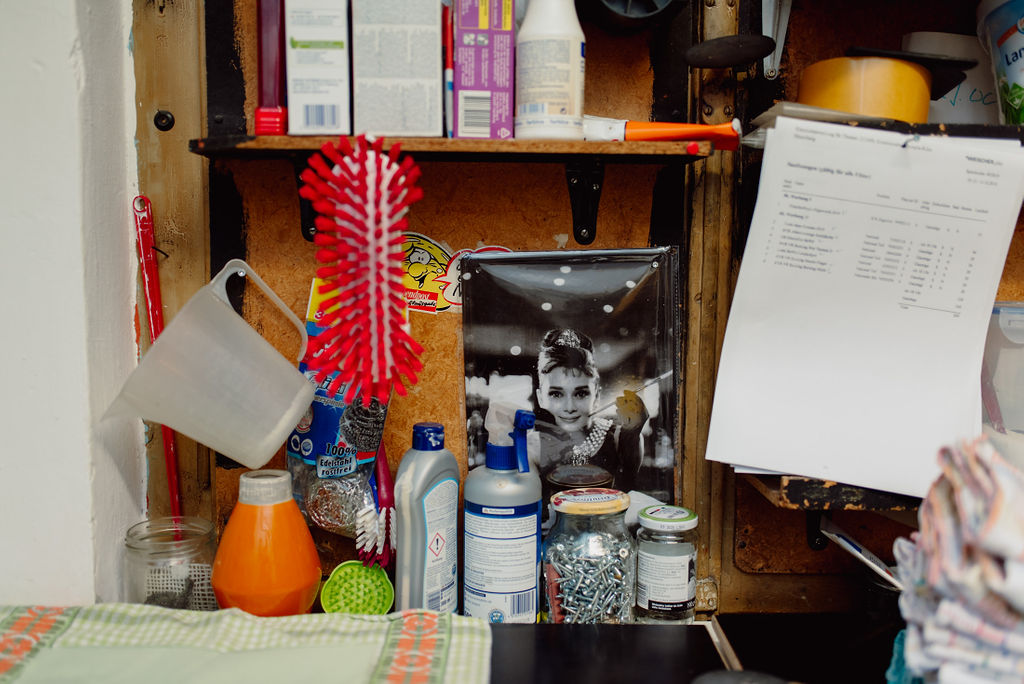 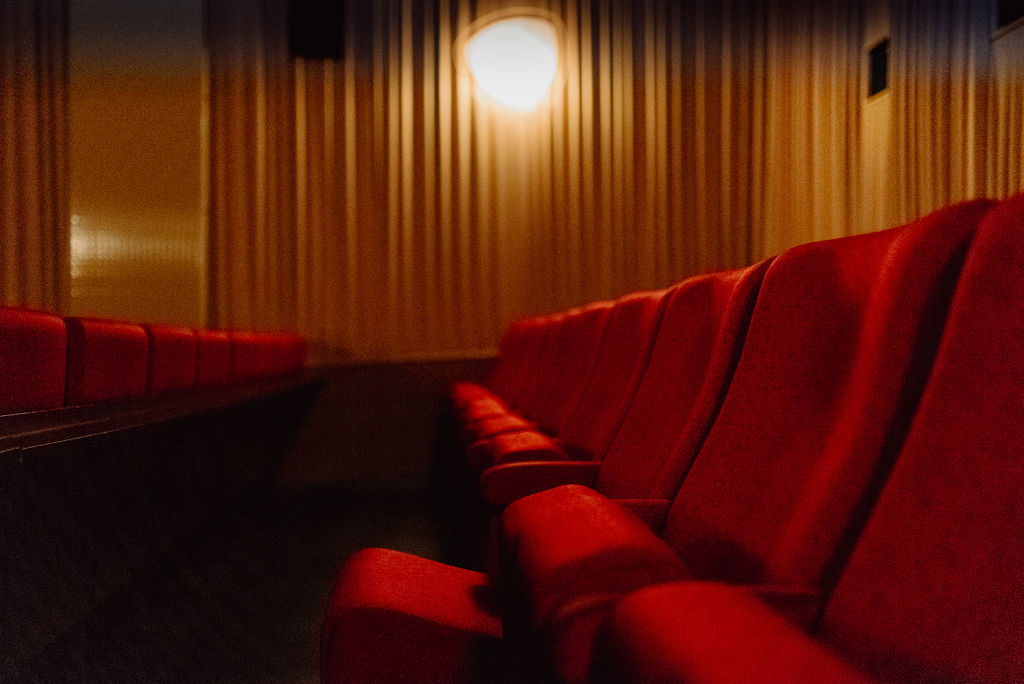 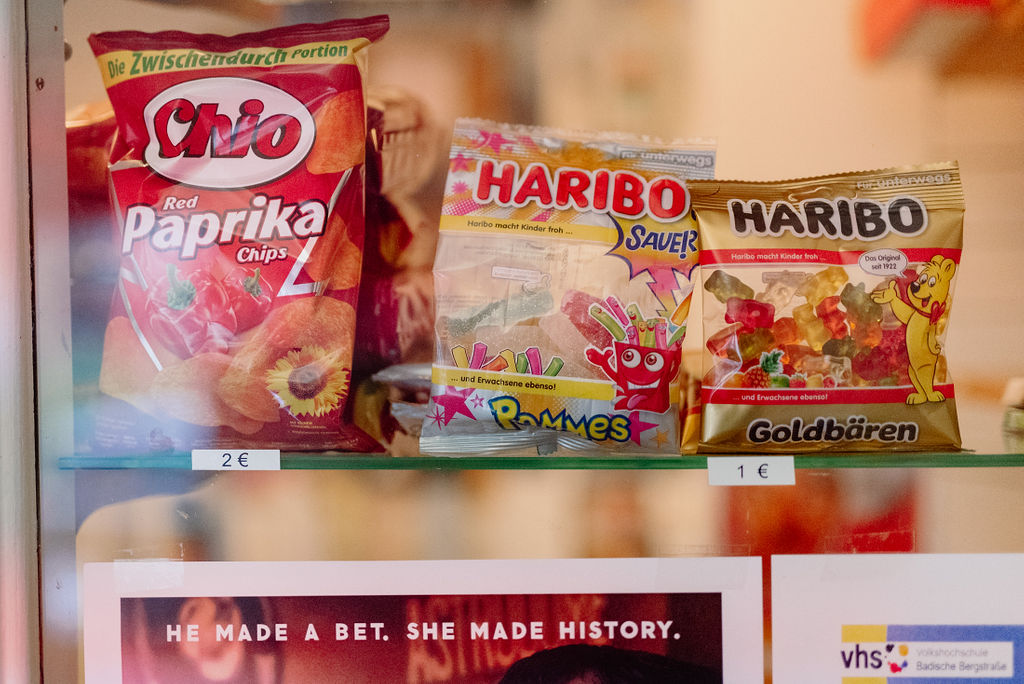 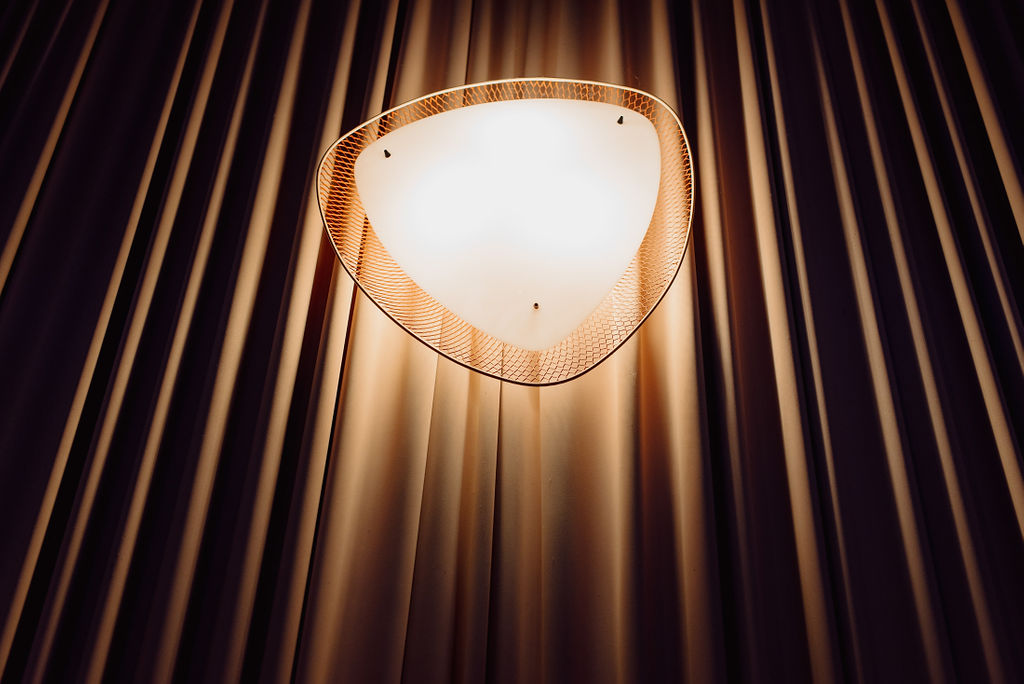 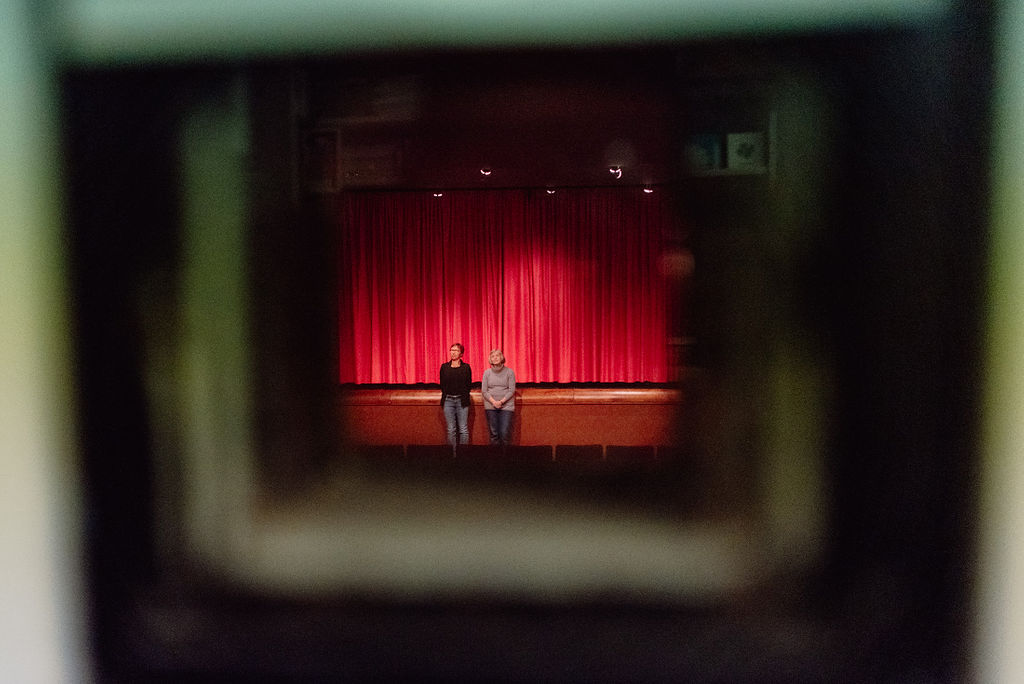