Back to the future

They do still exist: places that merge the past and the present into a harmonious whole. At once dreamy and romantic, but also vibrant and modern: Mosbach’s historical centre, with its uniquely beautiful ensemble of traditional half-timbered architecture, is an outdoor museum and an urban laboratory, all at the same time. It is also a home to people that love their city and tell their story with real passion.

The last tower watchman of Mosbach had an enviable job. The view from the town hall tower, across the Odenwald, is breathtaking – and his work-life balance was close to perfection: from his spot, at a height of 34 meters, Georg Andreas Großkinsky was merely in charge of ensuring the tower bells were ringing reliably. At the same time he was able to make some money on the side as a cobbler. Up until 1909 the inhabitants of Mosbach were able to drop shoes in need of repair, into a basket, lowered from the church’s spire. Shortly thereafter a repaired shoe would find its way down — and after payment the second shoe would follow.

This is just one of many curious stories, that one can learn about, during a tour up to the town hall tower, presumed one is capable of ignoring the awesome view. The view downwards onto the tiled roofs of the historical city centre, is almost eerily beautiful, and makes a stroll through the narrow winding streets feel absolutely essential.

“We offer tours through the city centre on Wednesdays and Saturdays, and the number of visitors has been increasing steadily.” Says Mariola Hoinka, who manages the tourist information office at the marketplace. The office is a contact point for city tourists, traditional architecture enthusiasts and touring cyclists, and it could not be situated at a better location – surrounded by landmarks, such as the abbey church St. Juliana, or the Palmsches Haus, which is one of Germanys most beautiful half-timbered houses. Originally from Bremen, Mariola wasn’t planning on spending long in Mosbach – just a while – to gain some experience after majoring in tourism. In the end two years grew into almost ten, and an initially cautious approach to the way of life in a small city of 23,000 people, became an avowed belief: “I grew to love life here in Mosbach – not only because of how beautiful the country is, but also as getting to know the people is so much fun.”

Mariola Hoinka manages the tourist information office at the marketplace.

One of these people is journalist and archaeologist Rudolf Landauer, who mostly specializes in his favorite two subjects: the Roman era and aerial archaeology. Following an enquiry by Mariola Hoinka, this Mosbacher-of-choice began looking for literature on traditional half-timbered architecture in Mosbach – and he found: nothing! “I was very surprised to discover, that five centuries of exceptional half-timbered architecture was not yet documented. We immediately knew it was time for a guide to this part of the cities cultural heritage.”

A year of work, and many surprises, finally led to the 2016 release of the „Fachwerkführer Mosbach“ (Guide to the half-timbered architecture of Mosbach). The guide created a little revolution of sorts, as it has totally revived the world of half-timbered architecture in Mosbach. Each of the 25 honorary guides can tell a unique story about every half-timbered house, but of course individualists are free to go on their own explorations of the old town and to be amazed. It seems crazy that the houses here braved the chaos of the 30-year war, the Palatinate War of Succession and two world wars. This way a unique architectural ensemble was preserved, sealed off by the lush green Odenwald mountains. “What is special here is the fact that the buildings range from the 14th to the 19th century and are in great shape. Most are inhabited or used commercially.” 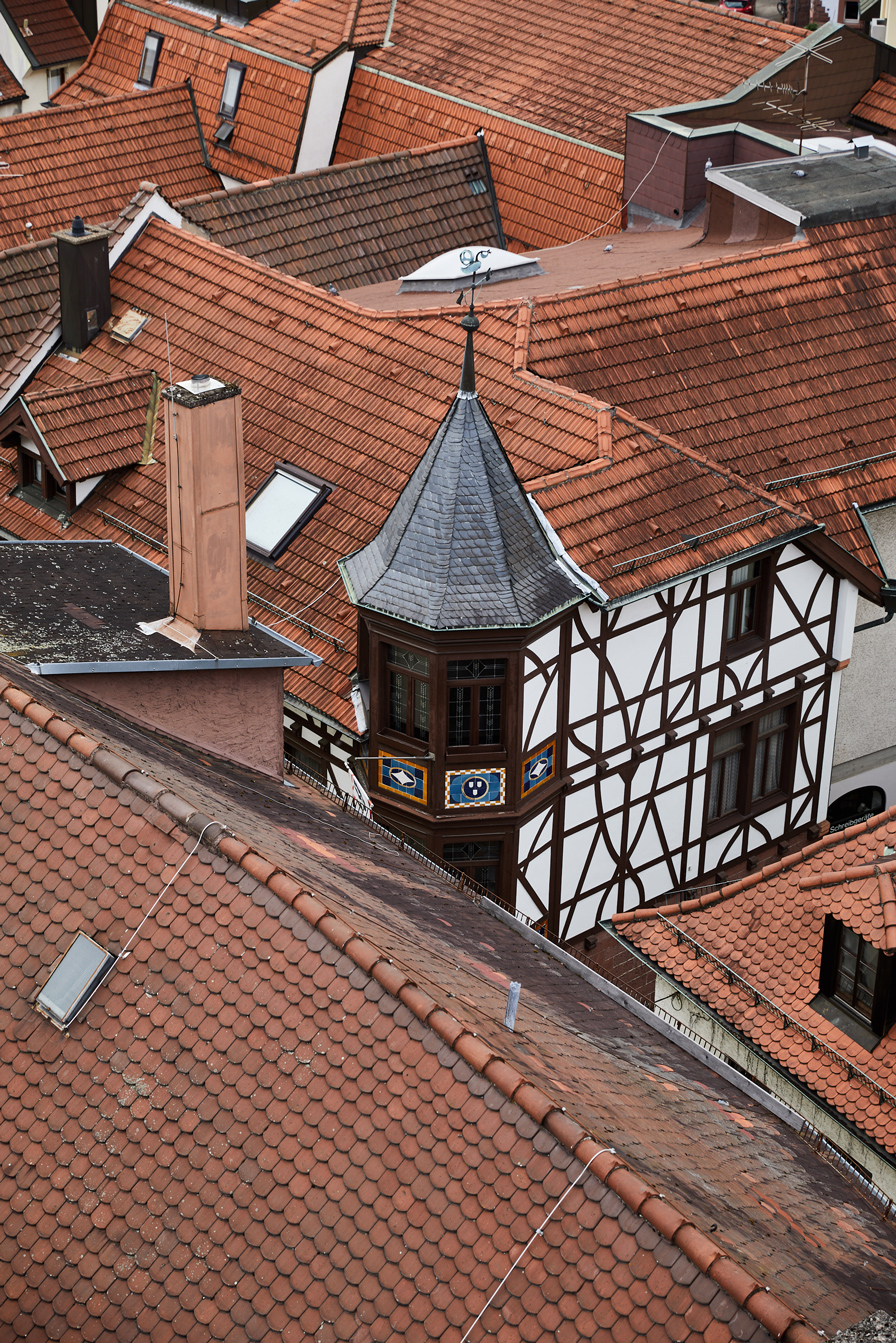 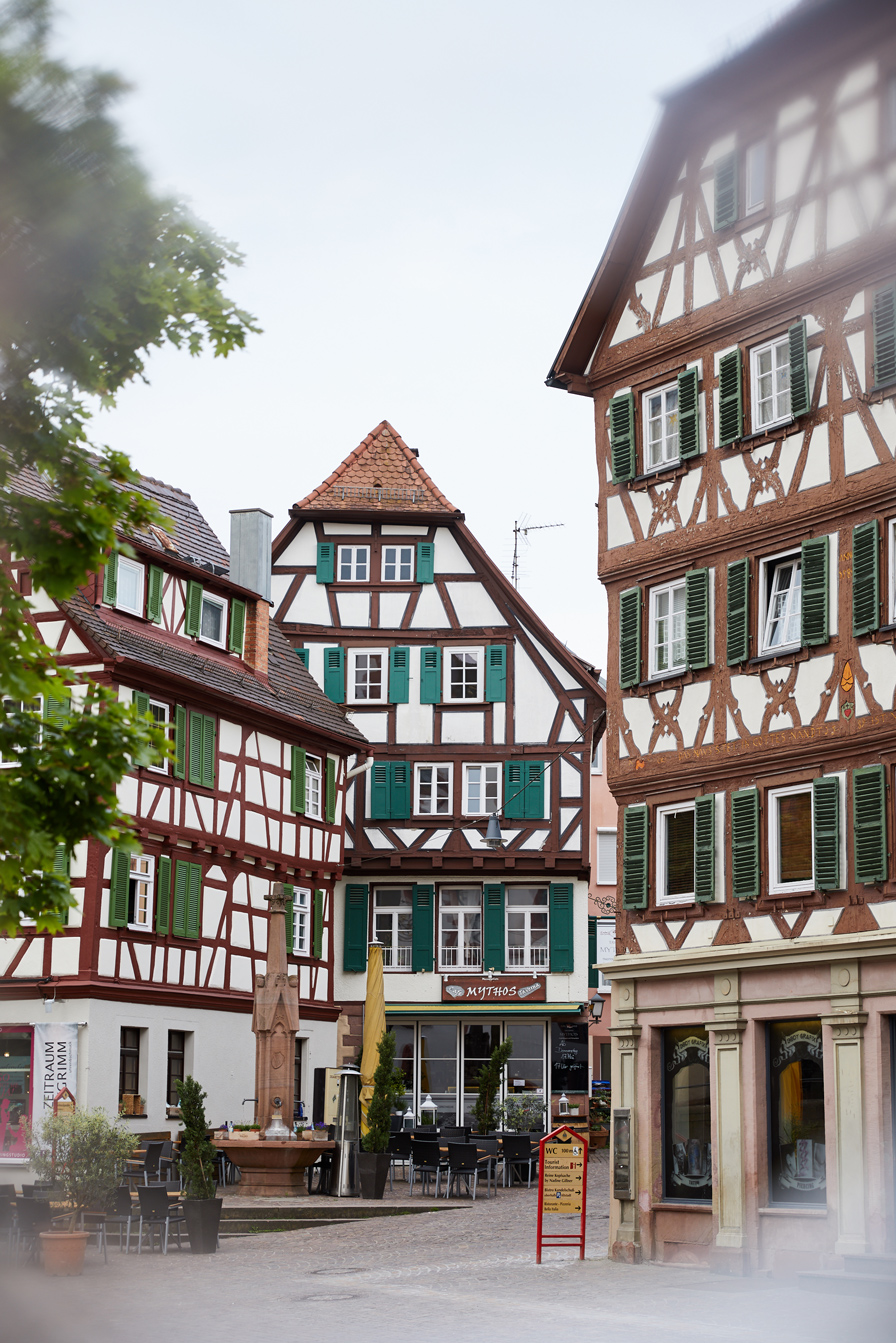 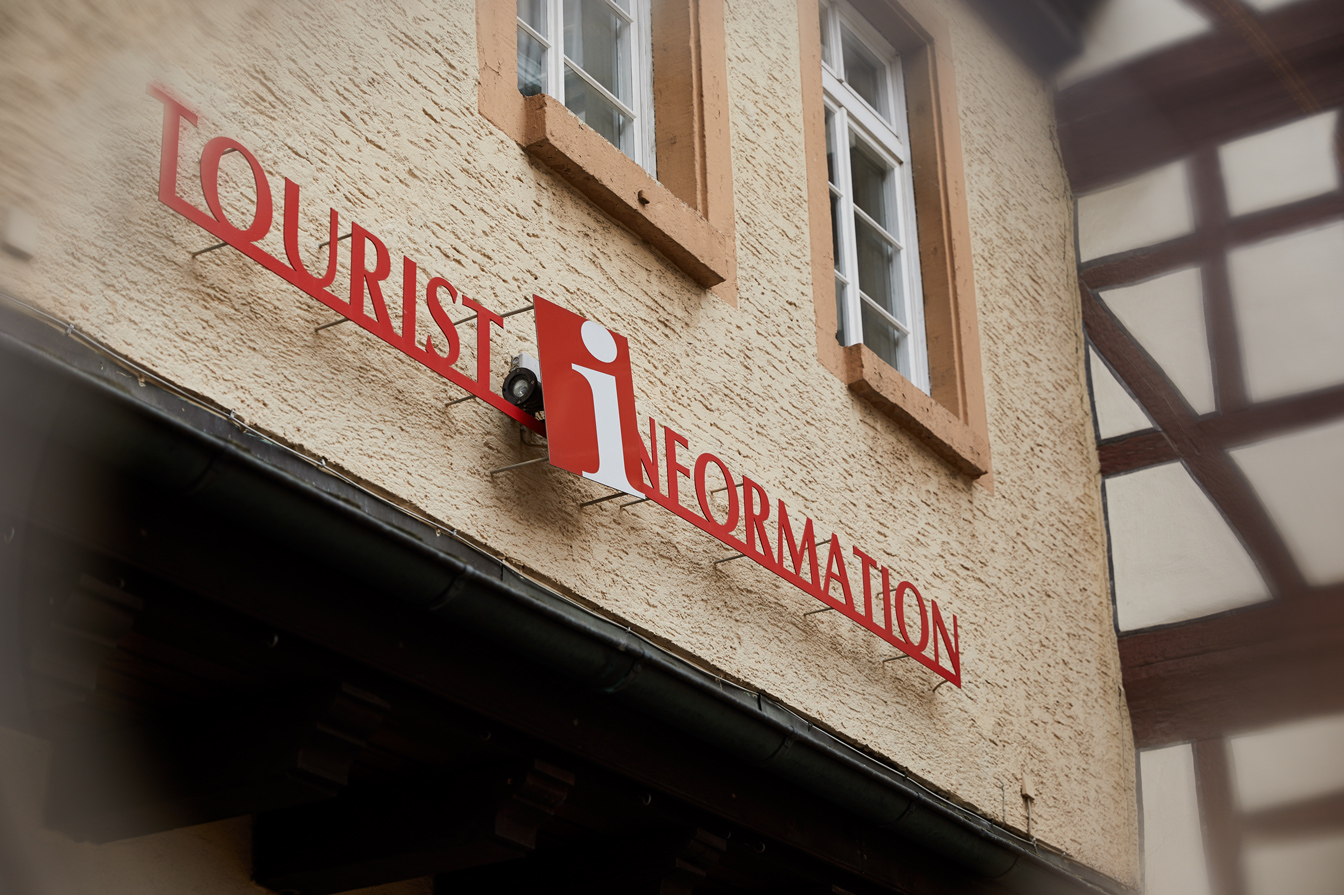 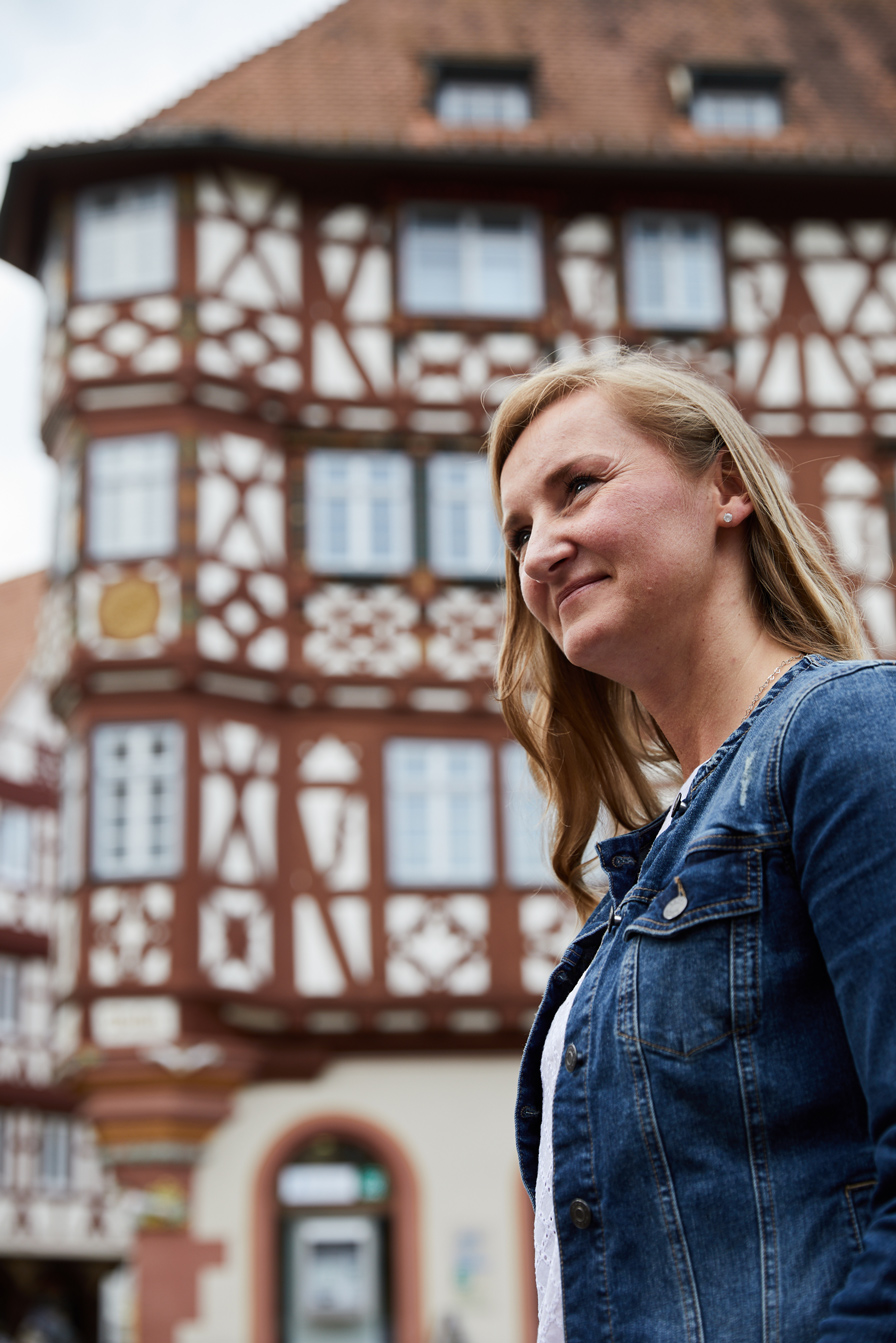 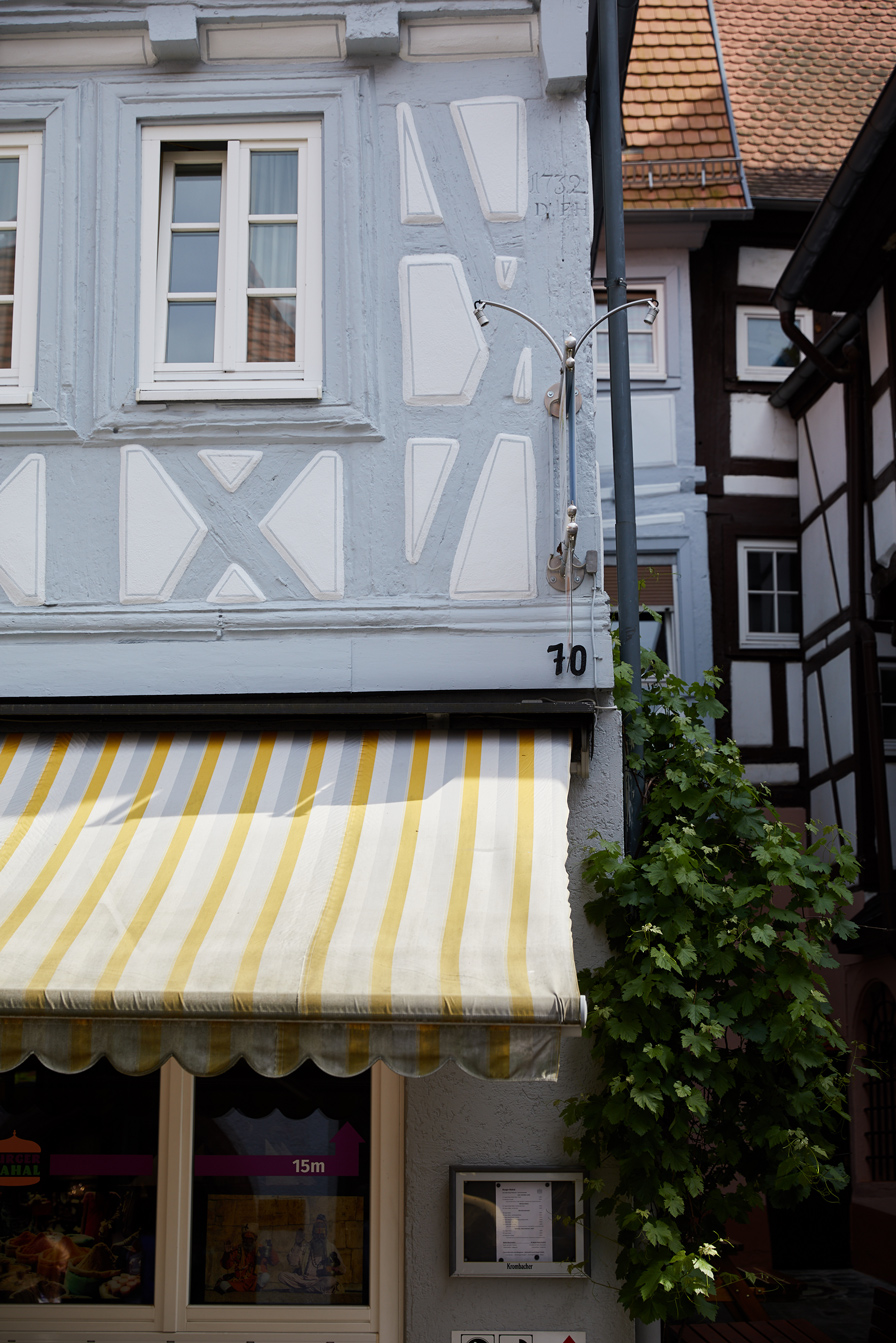 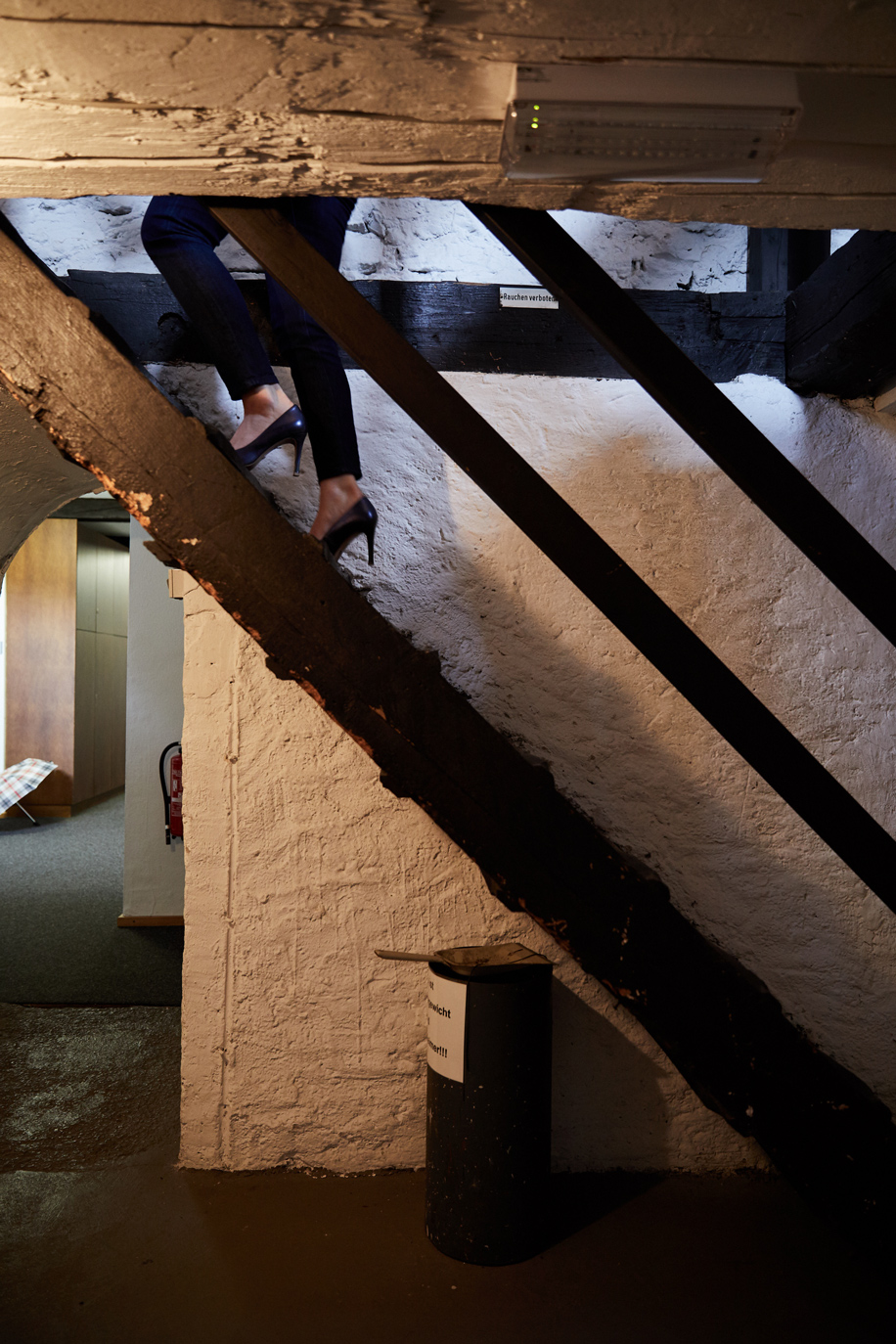 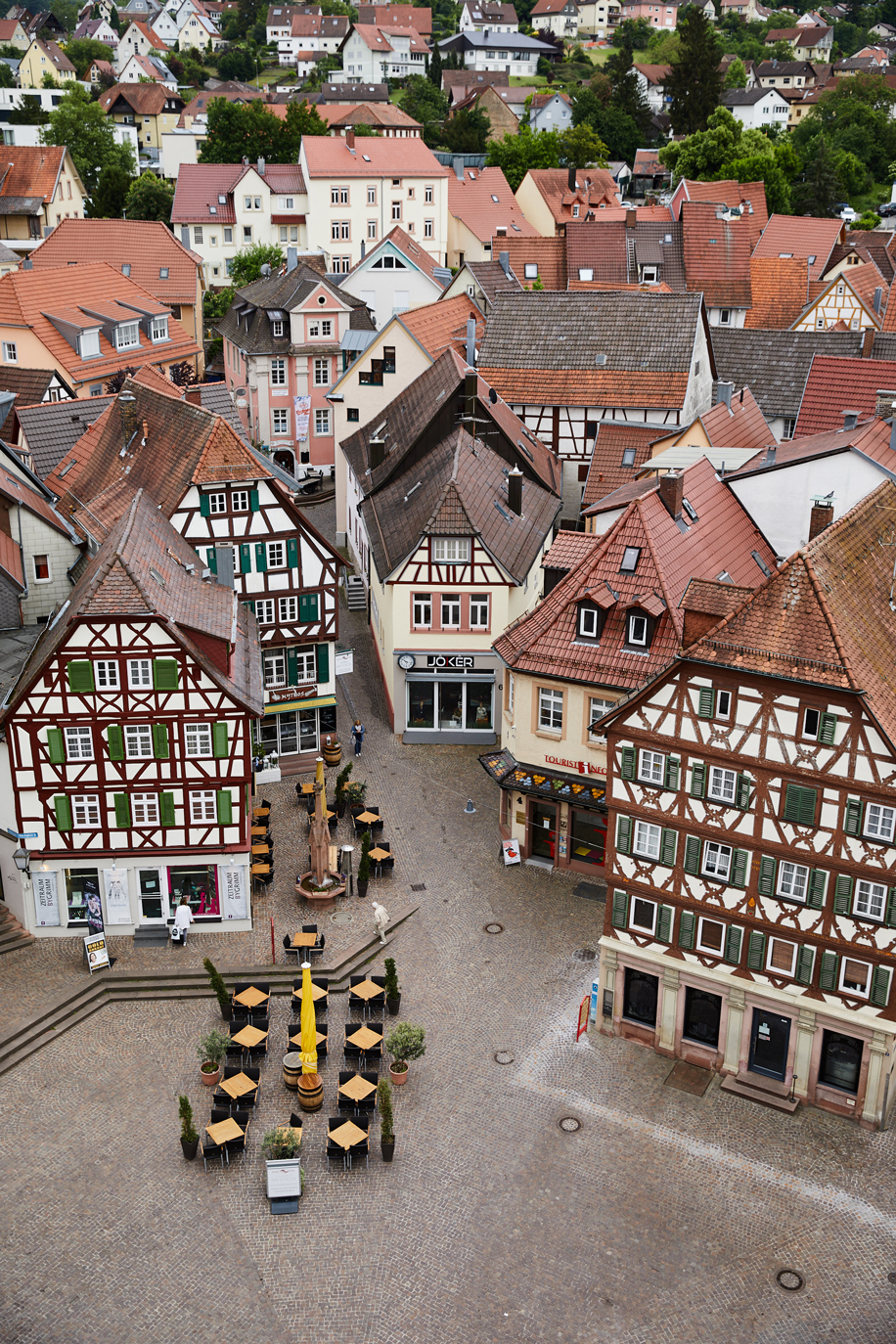 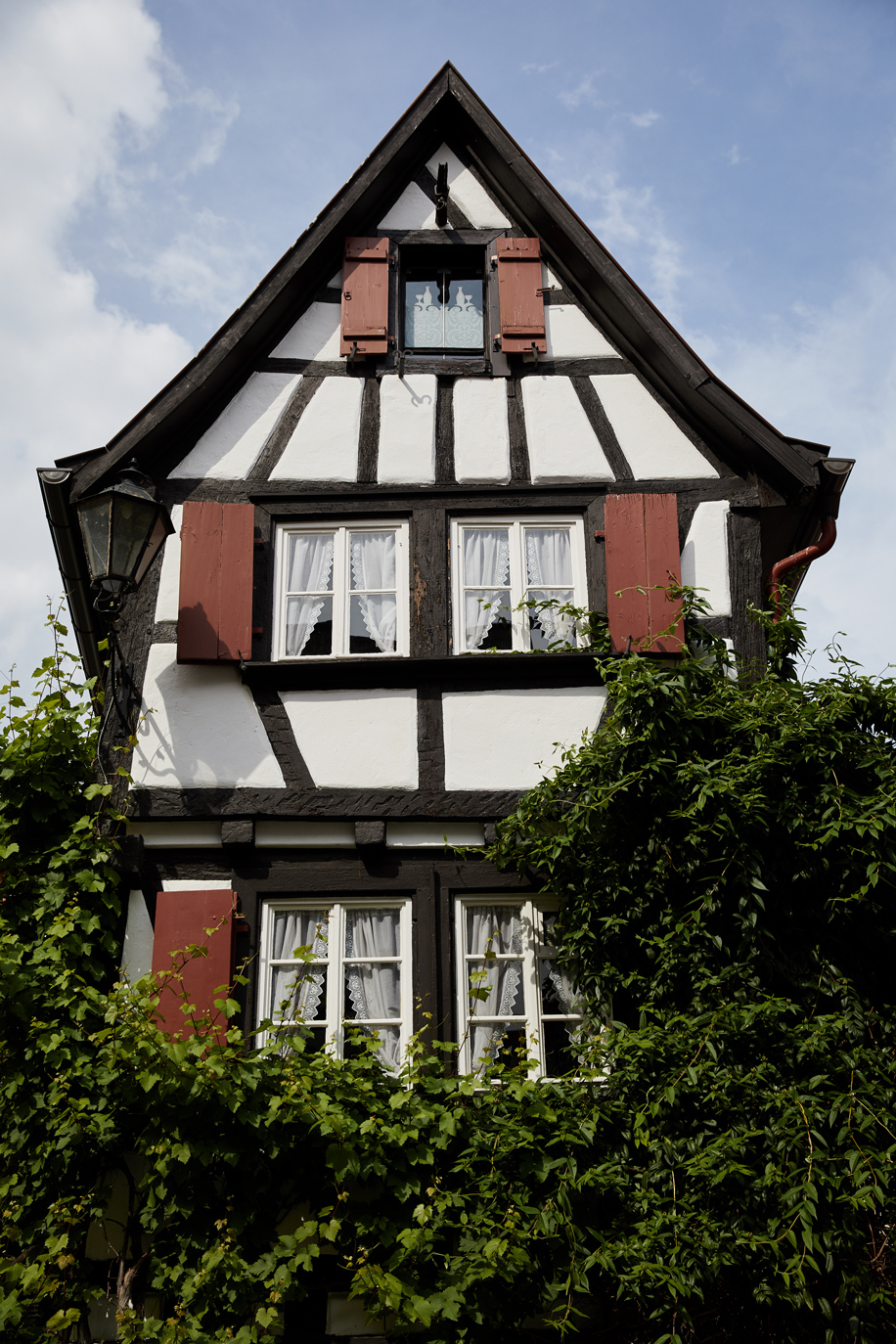 One thing is for sure: In Mosbach the issue of half-timbered architecture is alive and is being further reinvigorated. As part of a city restructuring plan homeowners have received over 3 million euros, as grants for renovations. Additionally 15 million euros from private resources have been invested. For example by Uwe Palm from Mosbach, who has been living in the USA. He invested several million in the renovation of his parental home, the magnificent “Palmsches Haus”, which was built in 1610 – a real rarity and an example of the highest level of medieval carpentry.

Mosbach rewarded the rights to becoming a Free Imperial City in 1241.

So now the time to tell these many stories of half-timbered architecture has come: Until recently people visiting the Indian restaurant in the main street, could not have anticipated the fact, that  in 1732 the house was used by a Jewish kosher butcher, as well as an inn by the name „Zur Traube“. It was in this inn, that rabbi Dr. Leopold Löwenstein, who was Mosbachs only Jewish city councillor and an honorary citizen, would choose to have dinner on often occasions. And before the release of Rudolf Landauers guide most people didn’t know that the quaint “Haus Kickelhain”, which is Mariola Hoinkas favorite half-timbered house in the city, is actually 200 years older than assumed. Dendrochronological tests showed the house to have been built in 1591. When touring the house one learns that at the time, there wasn’t enough space to offer every occupant their own bed, and some even had to sleep while sitting up – such as tower watchman Georg Andreas Großkinsky, who lived in very small space together with his family, up in the town hall tower. On the other hand he was blessed with a luxury, that many people in the city must have envied him for: a toilet with a “Kiwwel” to take care of ones business.

A “Kiwwel” was an old wine cask or bucket. These were set up in the alleys between the houses, and the smelly contents, called “gut Brieh”, were used to fertilise the fields. This clever method led to the nickname “Kiwwelschisser”, which people from Mosbach still proudly wear today, and which became a landmark in form of the Kiwwelschisser fountain in the Badgasse.

Every step one takes in Mosbach touches upon historical ground. Not 100 meters away from the tourist information office, benedictine monks founded the “Monasterium Mosabach” in the 8th century. This is roughly located where today people can shop for regional products on the marketplace, beneath the abbey church. The monastery marked the beginnings of urbanisation in the region, as quickly a settlement began to grow around it. By todays standards King Henry VI was the determining “influencer”: in May of 1163 he visited not only the episcopal church in Worms, but also the Juliana abbey church, which was part of Worms at the time. This created a boom and led to Mosbach being rewarded the rights to becoming a Free Imperial City in 1241. This was the earliest founding of a city in the Neckar-Odenwald region.

When the tower bell rings every evening at 10:45 PM, don’t worry: it is not the ghost of the last tower watchman, but an algorithm, which rings the oldest bell in the tower, casted in 1458. This remembers the Count Palatine Otto I, who lived in Mosbach in the 14th century. One evening he had the bell rang, to successfully help his spouse Johanna find her way home, after getting lost while out hunting …