Where the world was set into motion

The history of modern mobility begins in Mannheim – with the invention of the car by Carl Benz. The museum revealing this history is located in Ladenburg – set in scene by Winfried A. Seidel who turned Carl Benz’s former factory halls into a monument of automotive culture. Smell of oil inclusive.

This is where he worked – the presumably most influential start-up entrepreneur of the modern era. In an old clinker brick building in Ladenburg, just a few minutes drive from Mannheim, where, on 29 January 1886, he made his historical invention setting the world in motion: the motor-car.

Test drives frequently led Carl Benz along the Neckar to Ladenburg. Here, he opened his own automobile manufacturing company together with his son Eugen in 1906. Round about 100 years later, the vintage car collector Winfried A. Seidel opened an impressive museum in the old halls of the manufactory – drawing more than 20,000 visitors each year to its premises.

In 1905, Carl Benz bought the premises at the square in Ladenburg today called “Dr. Carl Benz-Platz”. Just a few kilometres away from Mannheim, where he invented the motor-car, the entrepreneur founded the company named “C. Benz Söhne”. This is where the car museum has been revealing the history of mobility since 2004. Photo: Automuseum Dr. Carl Benz, Ladenburg

In the midst of the renovated halls, there is a little room preserved in its original condition. Just a workshop. But it still looks exactly like in Benz’s time. The plaster on the wall of the little room is dirty, the work bench full of tools. And it smells just as it did in the old times – of motor oil. When Winfried A. Seidel bought the historical halls from Carl Benz’s descendants he was pleased to find the place untouched by time. The patina of sweat and hard work was still sticking on the walls.

That this authentic atmosphere has been preserved is due to the automobile expert’s special care. He had to renovate a lot in order to turn the factory halls into a documentation centre for his unique vintage car collection – without stripping the place bare of its history. On the contrary: Seidel’s private museum is an emotional hoard of preservation. Car enthusiasts from all over the world come here each year and discover “what others often wanted to get rid of” – as the museum’s owner, who restored many of the exhibits himself, puts it. Legendary vintage car originals are to be discovered here featuring brightly polished bonnets, chrome-plated details, plus the stories that come along with them.

About 120 vehicles reveal some kind of cultural history of mobility accompanied by a fascinating presentation of the historical background information.

The collector gathered wonderful pieces ranging from the mobile sawing machine to the racy sprint and touring car: The legendary “Benz Patent-Motorwagen” found its place here – as a loan from the Daimler Benz Museum in Stuttgart – as well as a shiny Formula One racing car of the multiple world champion Michael Schumacher or remote-controlled model cars on a scale of 1:5 like the “Lanz Bolldog” from 1929 – along with Karl Drais’s bicycle and Julius Hatry’s rocket airplane another path breaking invention “made in Mannheim”.

He loves to steer more than just the fate of his car museum: Winfried A. Seidel.

It is thus not surprising that next to all these automobiles there is also an impressive collection of memorabilia on display – ranging from spark plugs to stop watches – the latter so to speak as a symbol of the aspect of time, which radically changed with the invention of the motor-car. For up until today, it is after all the car which shortens our ways and makes great distances appear easy to overcome. By contrast, the former reception room of the company called “C. Benz Söhne” with its red silk wall covering looks as if belonging to an altogether different era. 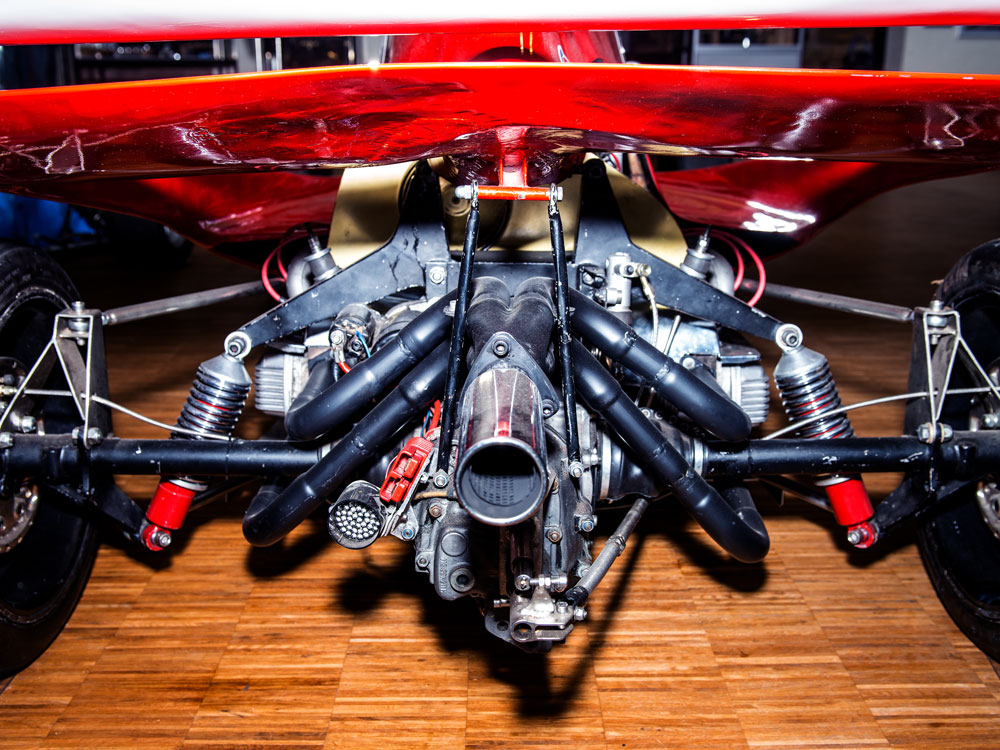 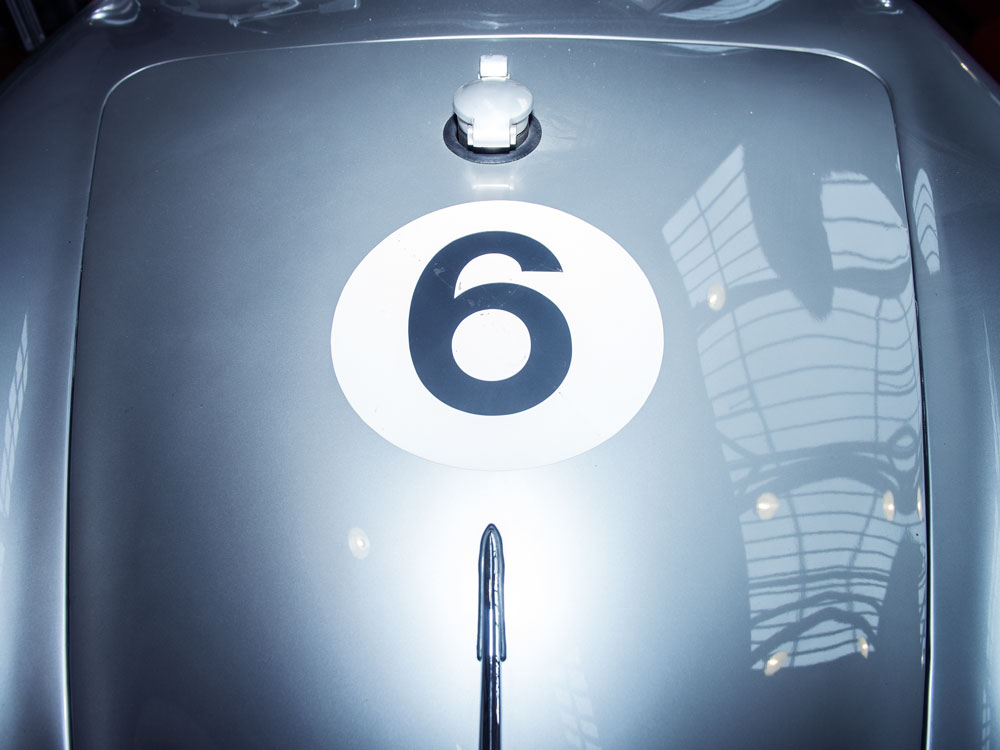 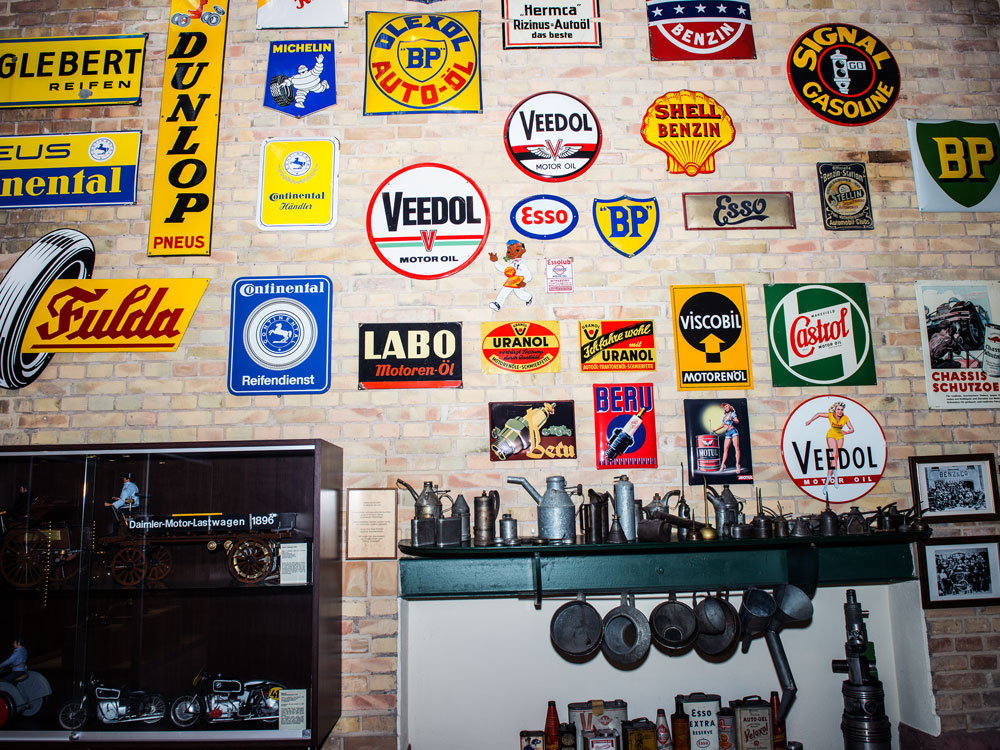 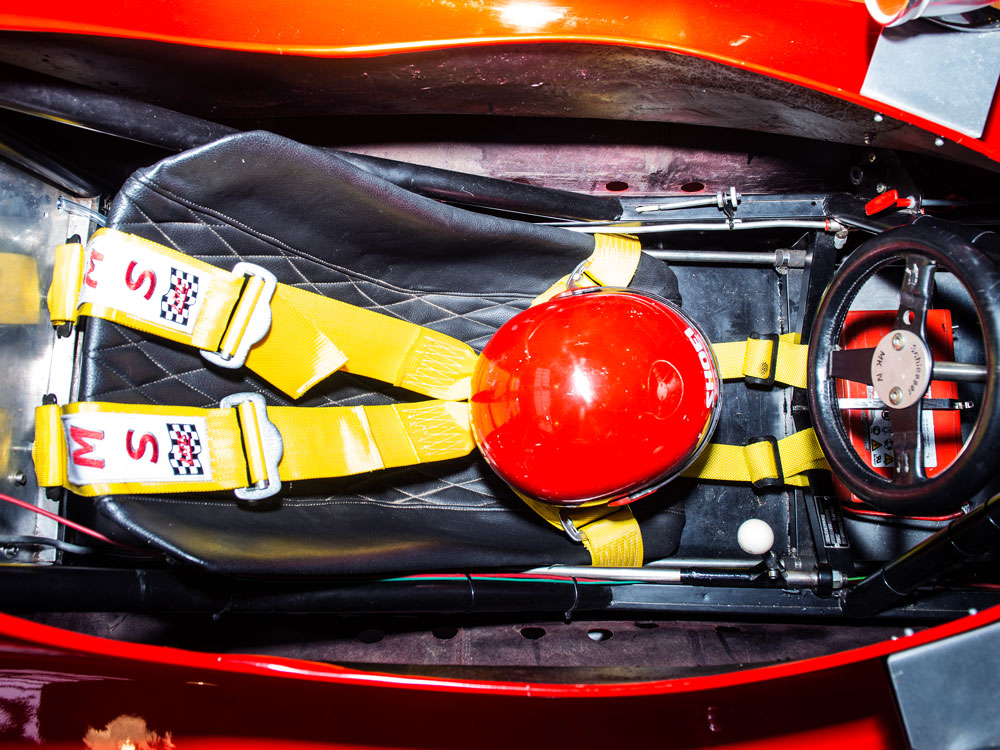 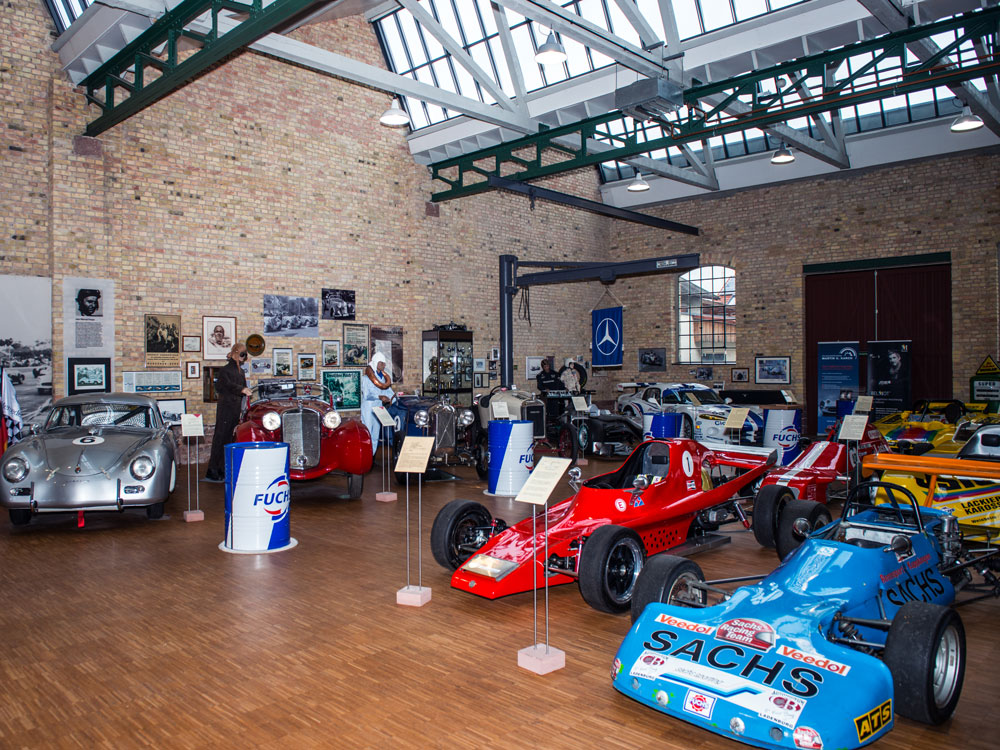 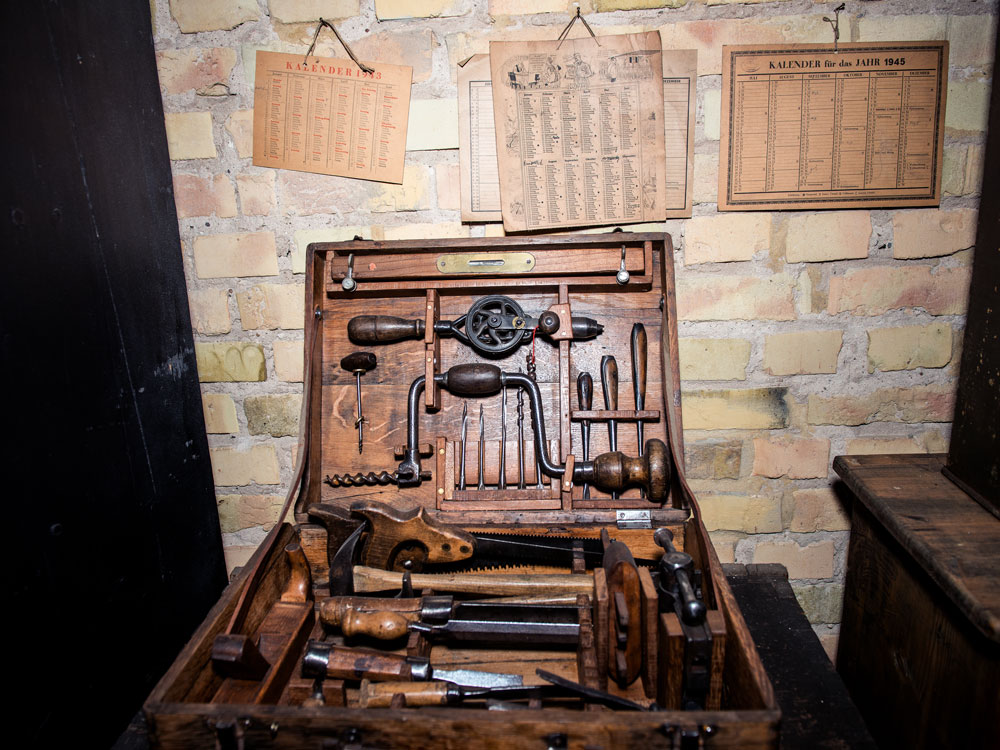 How come a former telecommunications technician like Winfried A. Seidel founds an automobile museum? Seidel answers this question by telling a little story of his childhood days: Once, the nationwide sought-after vintage car expert grew up next to a scrap yard in Bielefeld. “It was simply unbearable having to watch how everything disappeared”, he remembers: No matter if the cars on the site were still in shape or had preserved their dignity, they were mercilessly demolished with a cement ball. Maybe the little boy already resolved back then that old cars should be granted a second life? What is certain is that many years later he not only bought countless vintage cars in order to lovingly restore them himself, but Winfried A. Seidel also founded this very museum in Ladenburg in reminiscence of Carl Benz and his legendary inventions. And he brought the largest vintage car fair in Europe, the “Veterama”, in Mannheim and Hockenheim to life.

He discovered many vehicles of his collection in barns or on the internet and gave them a new lease of life himself. Or gleaned them in the fields like his first vintage car: In 1968, he saw an Adler Trumpf Junior from 1939 standing on the wayside, covered with snow and with a hole in its fabric roof. “I just could’t pass by”. Since then, the 76-year-old collector time and again invented himself – in order to remain true to himself: Born in the Silesian town Reichenbach in 1939 and grown up in Bielefeld he moved to the Rhine-Neckar region because of a woman when he was a “youngster wearing studded jeans and a Hawaiian shirt”. He restored cars, repaired and sold toys and founded the “Veterama” in 1975, which recently lured almost 3,000 exhibitors and 40,000 visitors to the Maimarkt grounds in Mannheim. He had also been on stage as an actor for quite some time. Since those days, he has still been presenting numerous events himself. “And I know what it means to have a strong presence.”

And this is true, indeed: Seidel with his pepper-and-salt beard and his deep voice makes the impression as if he always kept his cool. As if he had built this museum in the twinkling of an eye and financed it from his own pocket. It has to be considered that Seidel had to raise the price for purchasing the historical factory of Carl Benz himself. He received money only for the renovation work, which was financed by the generous sponsoring of the Daimler-Benz company. To this very day, he does not need one cent from public funds. Together with his wife Brigitte, daughter Julia and son-in-law Jonas he manages to organise about 40 evening events each year – not to mention the effort that it takes to organise the meanwhile biannually held “Veterama”.

Is there a connection between him and Carl Benz? Benz had been “very low-key,” Seidel tells us. In contrast, it is very easy for us to imagine just how the owner of the museum could entertain and captivate his audience on-stage. But when you listen to him lovingly, even enthusiastically, explaining the details of mudguards or leather seats, then you know: Both of them – Benz as well as Seidel – have always been living for the cause. And this had in all likelihood a lot to do with four wheels and a steering-wheel…