When the west wind blows

As a child Rolf Rinklin simply wanted to fly away when it got too dicey. Today, he flies whenever he wants to feel free as a bird—and when the wind’s blowing from the west. A westerly breeze means ideal conditions at the “Schriesheimer Ölberg,” making a paragliding flight from the top of the mountain a trip into another world.

Even the way up is a ritual: Overcoming an altitude difference of hundreds of exhausting metres through the forest, first walking on paths winding through the vineyard of Schriesheim, then on narrow trails overgrown with roots up to the ruin of Schauenburg Castle—where Rolf Rinklin drops his rucksack weighing more than 10 kilogrammes, catches his breath and examines the clouds.

“When I walk up here,” the graphic designer from Mannheim says, “I am happy and have only one concern: that the wind is right.” And the wind being right for paragliders means the clouds come sailing over the Rhine valley like white ships towards the Badische Bergstraße area from the Palatinate Forest, i.e. from the west. Rolf Rinklin now continues his way up to the mountain top through the forest as fast as he can—until at the end of the path a broad clearing opens up like a window to the sun: This is the take-off site of the hang-glider and paraglider pilots of the Bergstraße district, the “Bergsträßler Drachen- und Gleitschirmflieger,” with an altitude of 270 metres above Schriesheim.

40 years earlier, in 1977, Charlie Jöst from Schriesheim roamed the forest in search of a legendary gliding airfield—and found the forgotten place where, back in the 1930s, sailplanes were catapulted into the sky with the help of a rubber rope. In order to start hang-gliding the drummer of the krautrock band Tritonus at that time just had to cut down some bushes, take a run-up, spurt over the edge of the slope—and fly!

At the exact spot where Jöst touched down safely some minutes later, on a meadow in the vineyard on the boundaries of the town bordering on Dossenheim, today in good weather there are dozens of paragliders—checking their smart phones. Once again, all hell has broken loose in the WhatsApp group “Schrieße nuff schlappe” (local vernacular meaning “toiling up the Schriesheim mountain”) with everyone hoping that they don’t have to toil up there—but rather get a lift up by bus. And right now, the club’s good old VW bus comes rattling round the corner to get the next group on the bumpy ride up to Ölberg mountain. If you don’t find a seat in the bus and don’t want to wait for the next ride, you have to walk—just like Rolf Rinklin today, who is now ready to take off.

He spreads out the paraglider on a big green mat. The numerous thin tethers are sorted, the GPS and flight instruments checked, the helmet donned, and the glasses reflect the clouds in the sky. Waiting for the right moment; it is now. Time and again his gaze wanders to the wind vanes at the edge of the forest. Dead calm. Nothing happens. But all of a sudden, it starts to rustle in the trees above. The west wind starts to become entangled in the U-shaped structure of the Ölberg—a warm wind serving as a thermal lift soars uphill. Now everything happens very quickly. Rolf Rinklin starts running backwards, with a short hitch the paraglider unfurls above him, then he turns his body towards the ramp and runs … and runs … and flies. 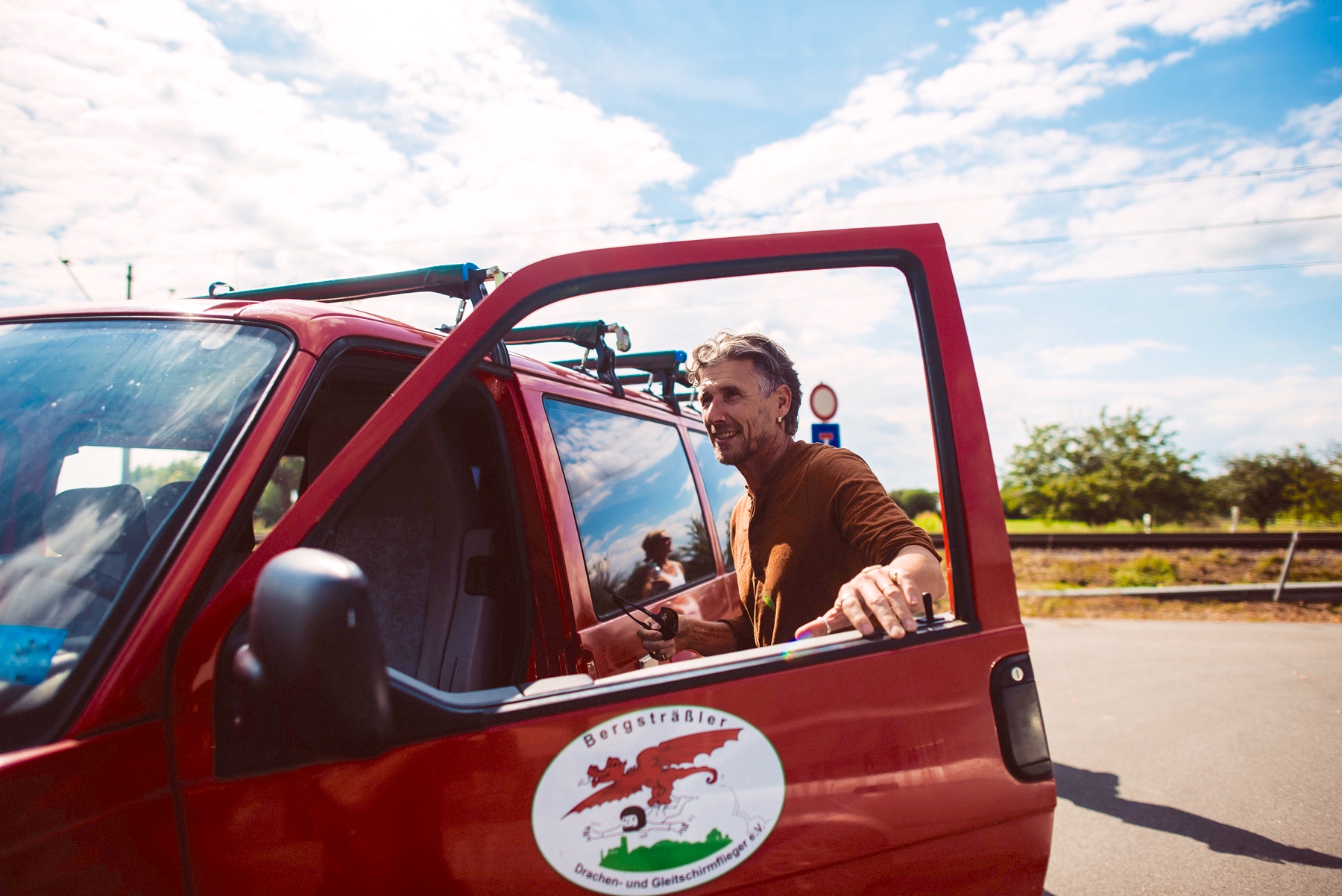 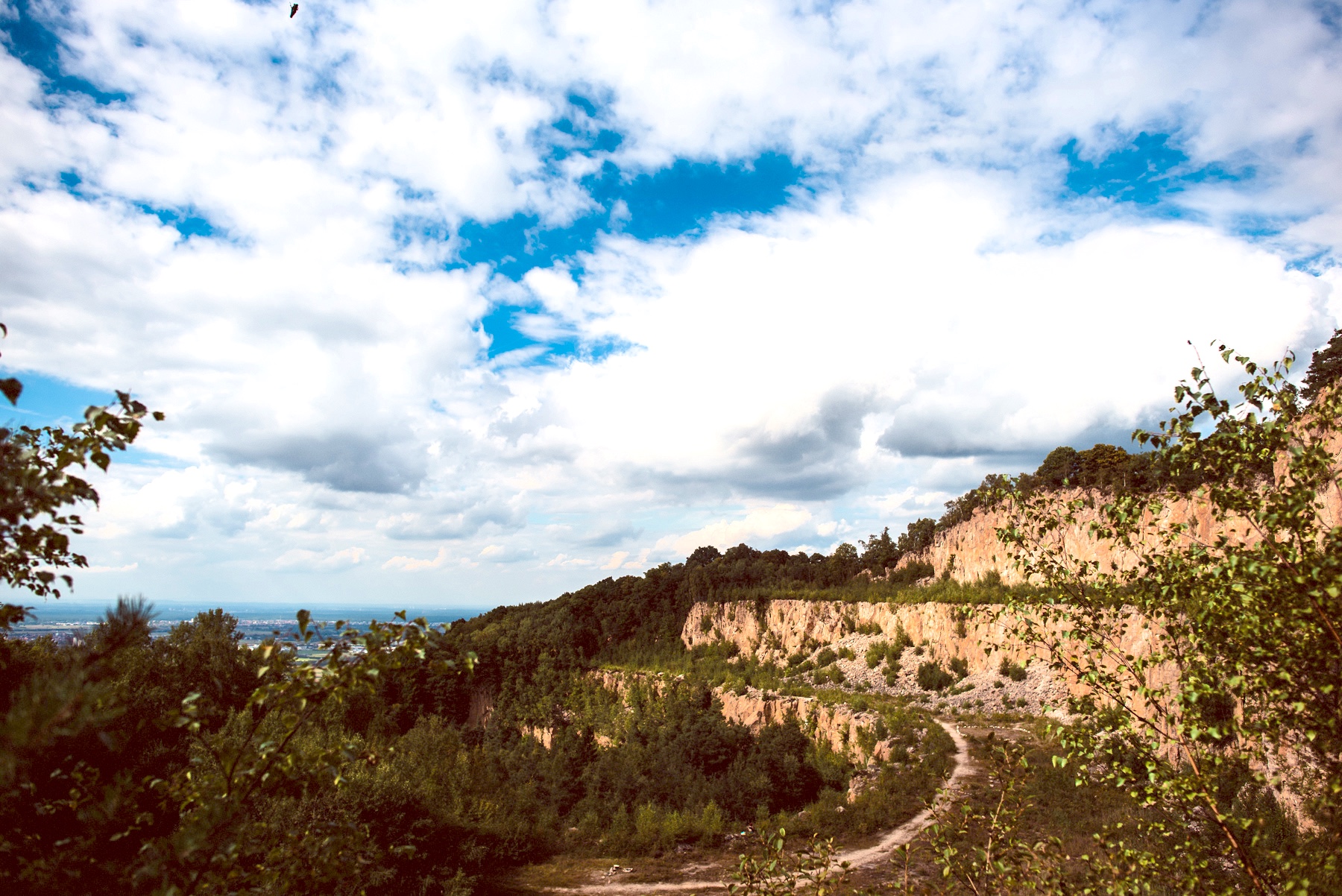 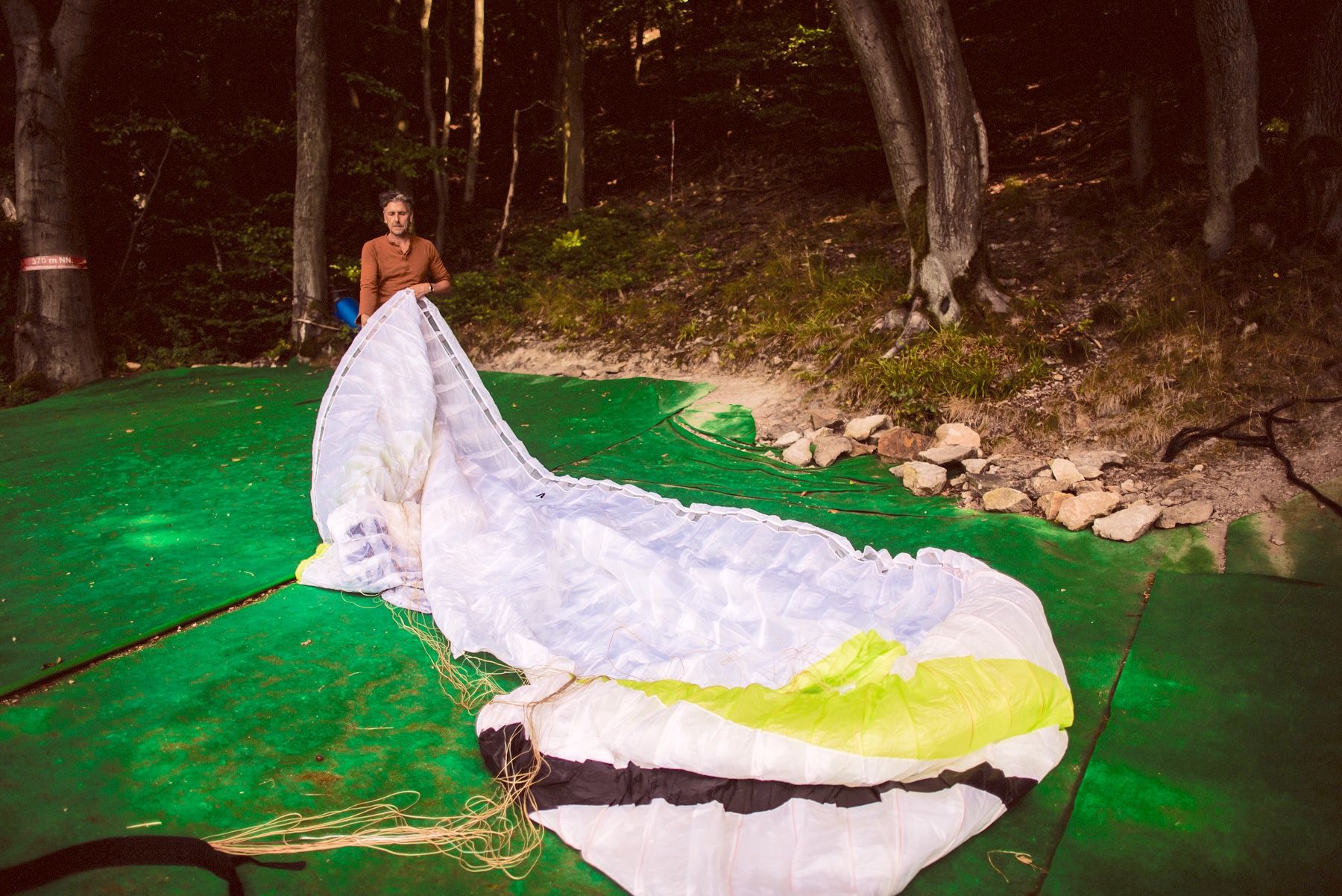 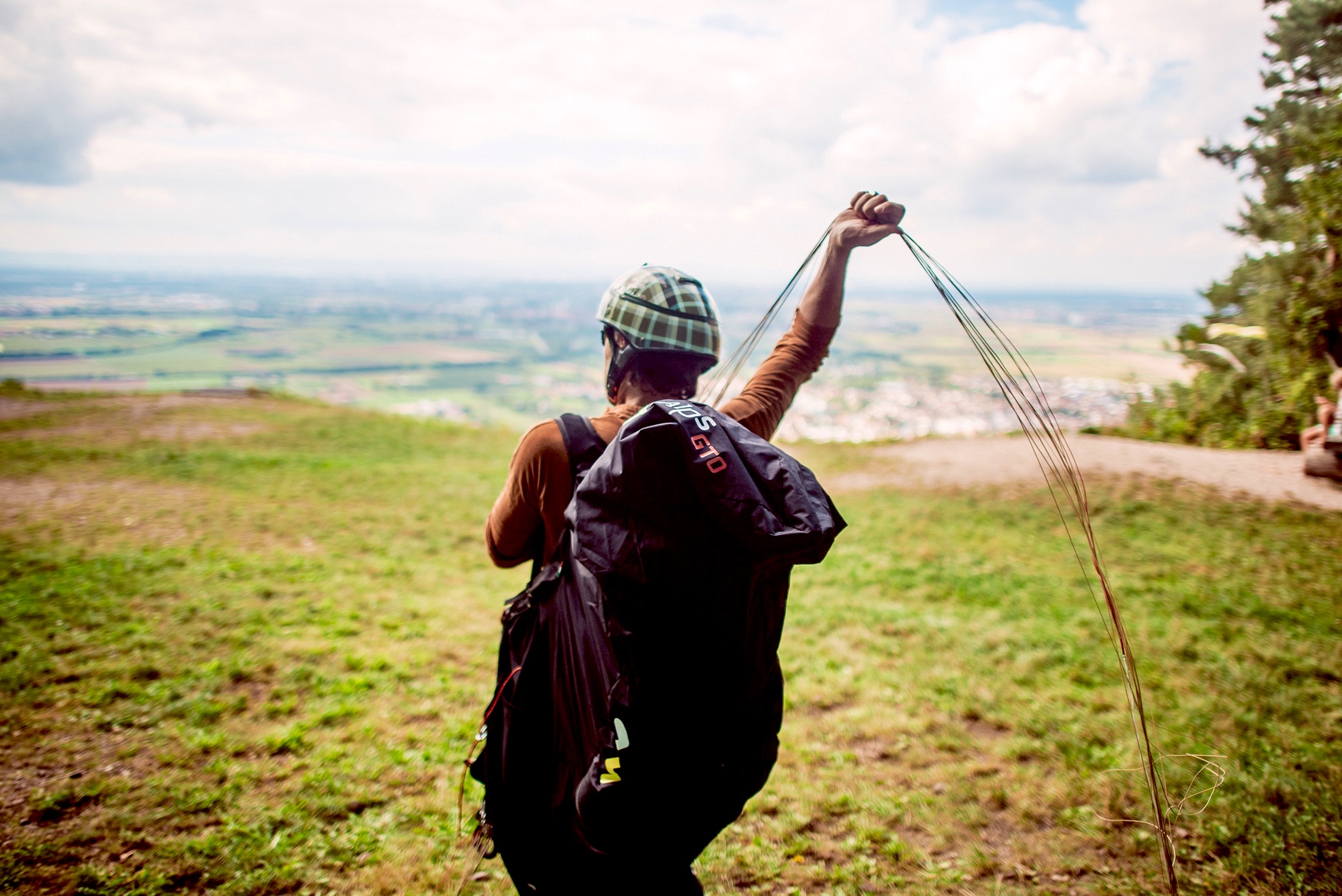 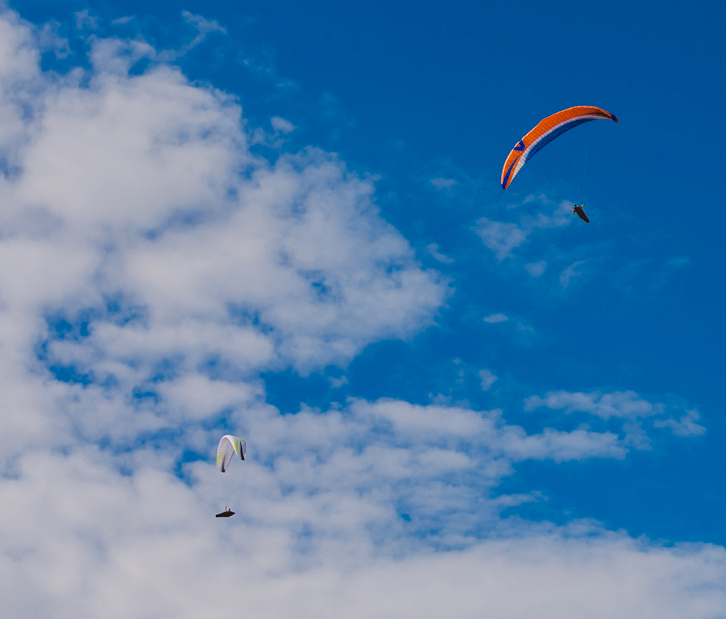 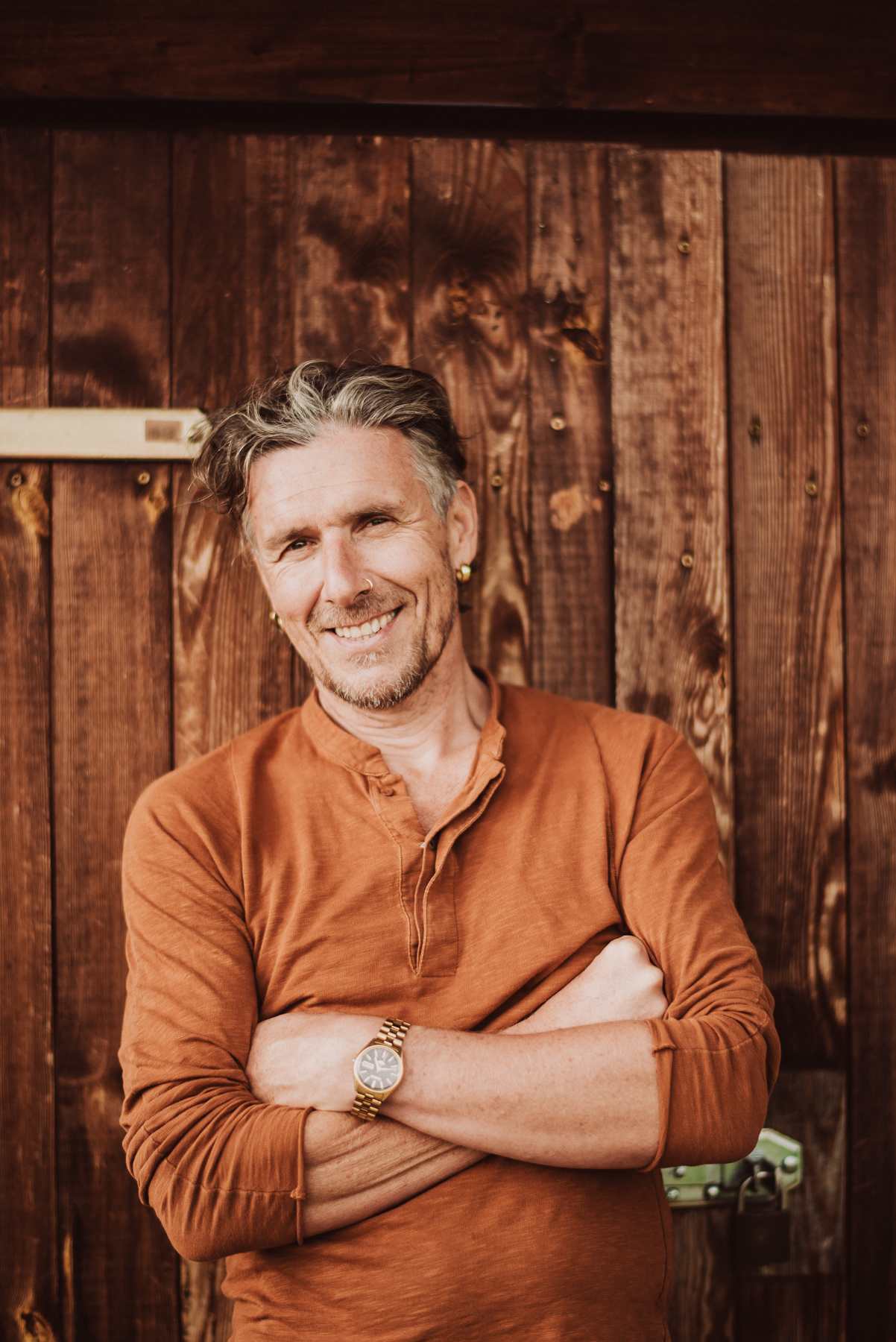 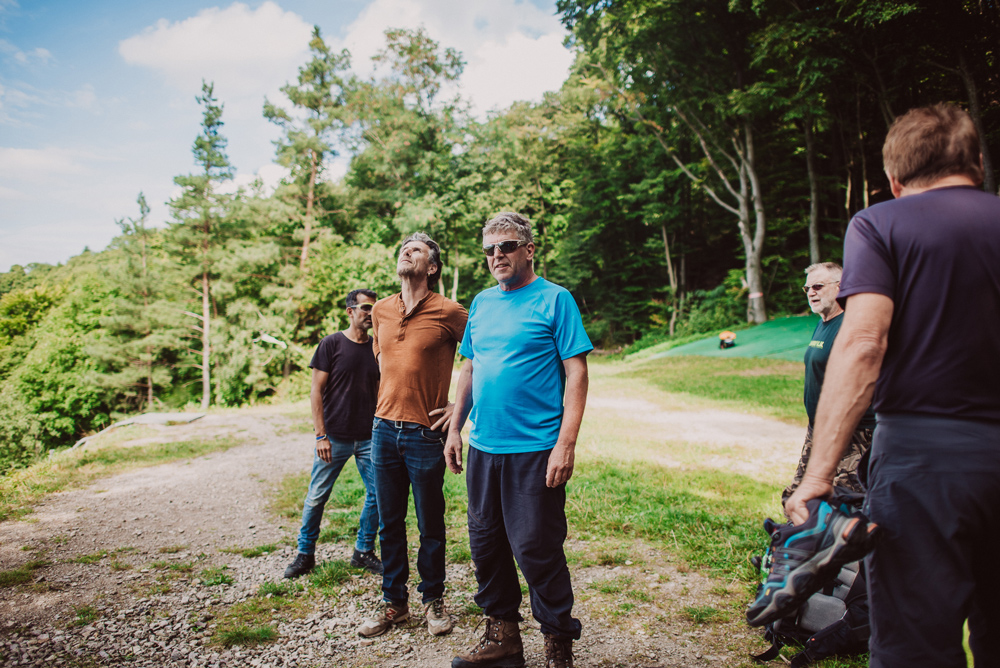 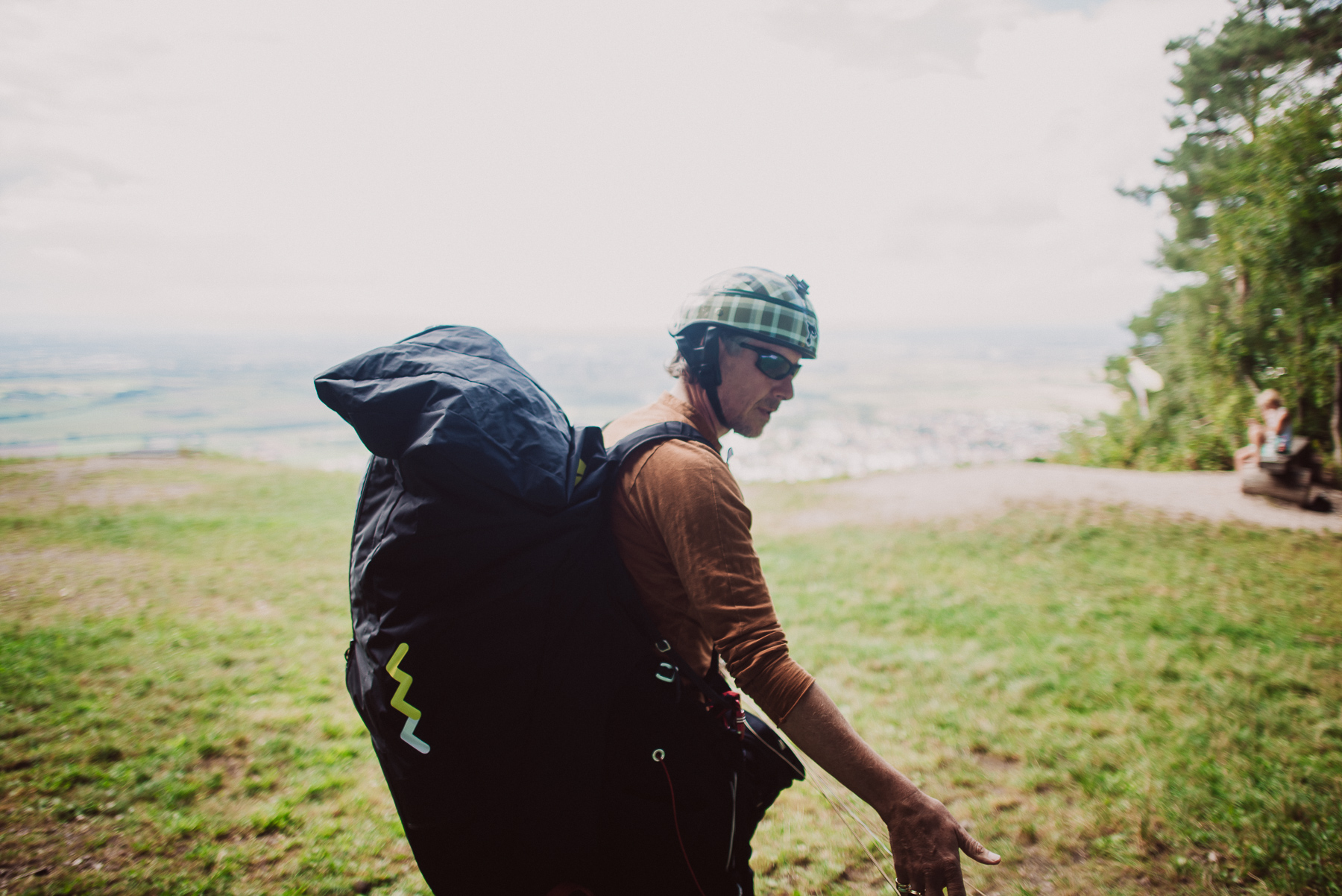 He has just touched down with such precision—and elegance that some people, who took a stroll through the vineyard, spontaneously applaud at the landing site. “We spent most of our time partying at techno clubs, but at some point, the idea emerged that we should buy one of the first paragliders available and jump off some mountain somewhere. We tried it out in the Kraichgau and in the Odenwald, but at the beginning crashed into trees and smashed into vineyard huts.”

Nothing really that could stop true paragliding pioneers. With a bit of luck, some growing experience and better material the targets became more and more ambitious. The paraglider pilots from Mannheim and the surrounding area set out for the Alps to make great leaps forward. “When you are flying at a championship, and are as high up as 1,000 metres above the highest tree tops and conditions are barely flyable, this can get the wind up you,” the man, who flew several national and international championships and was among the best at German championships and in the German paragliding league, says. But at some point, the pressure became simply too much to bear for the graphic designer from Wiesloch, who with his agency Formgeber moved into the former Felina corsetry factory site in the city on the Neckar. “I only fly for the fun of it now.”

Even as a child Rolf Rinklin dreamt of flying. His father was a pilot, from him he inherited his flying gene. So, what does it feel like to be able to fly? “The minute you take off, all your stress is gone. You are totally focused on flying and the beauty of nature. I have spent a lot of time in the Alps, but flying here in the Rhine and Neckar area is sensational, I think. Flying from the Ölberg over the climbing walls of the stone quarry in Schriesheim, the Thingstätte open-air theatre and the Neckar over to Heidelberg Castle and the Königstuhl mountain, sometimes paragliding further than 150 kilometres on end above the Odenwald or the Kraichgau region… It is a special feeling indeed to experience this incredibly beautiful landscape from above. I know every corner down there, but from up in the sky it seems like a totally different world altogether.”

Sometimes he is up in the air for up to five hours, and it is fun for him to “outdo” the other paragliders just a bit. He works for a manufacturer of sports paragliders as a team pilot and graphic designer and likes to draw the wildest aerobatic manoeuvres into the sky. The limit at the Ölberg is an altitude of 700 metres, since the take-off site is in the flight path of Learjets approaching Mannheim airport.

Down at the landing site things got crowded. Hikers stop and watch the spectacle above the Ölberg. When the weather is fine, dozens of paragliders circle the area, looking like a flock of colourful birds. And indeed, there are some colourful characters amongst the “Bergsträßler Drachen- und Gleitschirmflieger.” Since Charlie Jöst founded the club in 1977, a lot has happened. More and more women, men, students, pensioners, workers, physicians, all fly maniacs like the graphic designer from Mannheim, come to the Ölberg to fly from here into a different world—when the west wind blows. 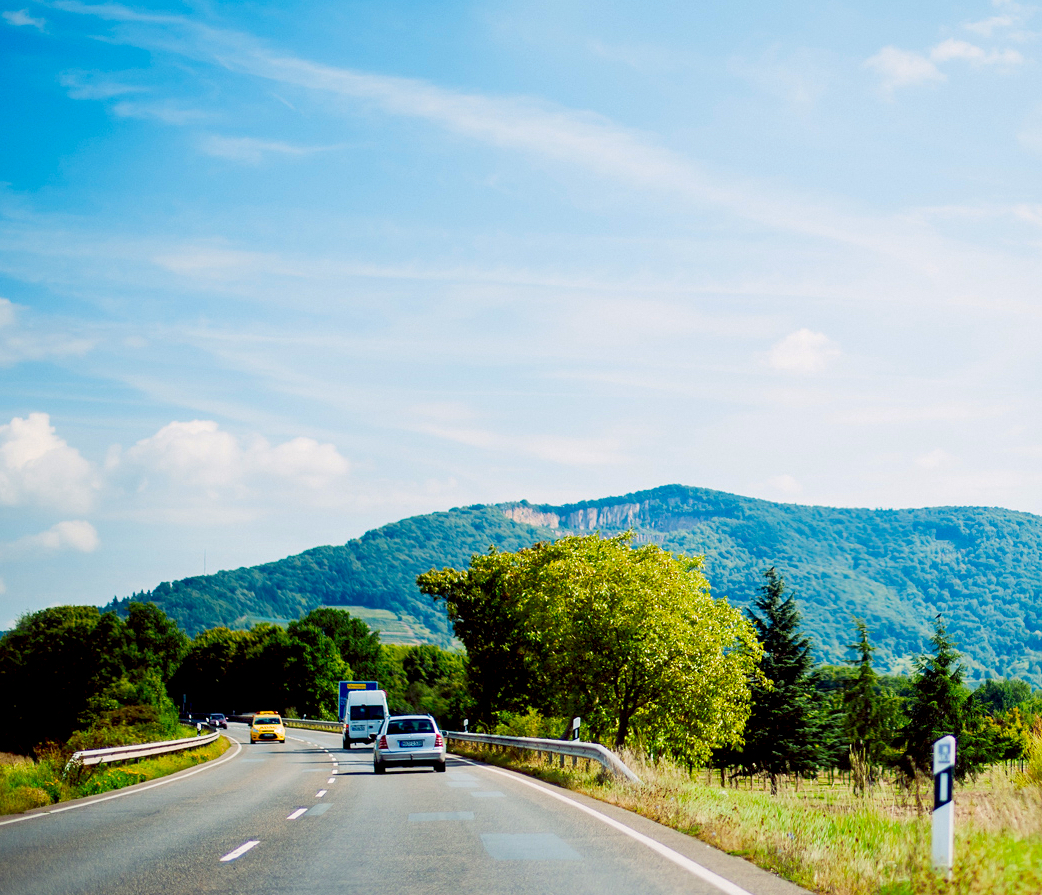 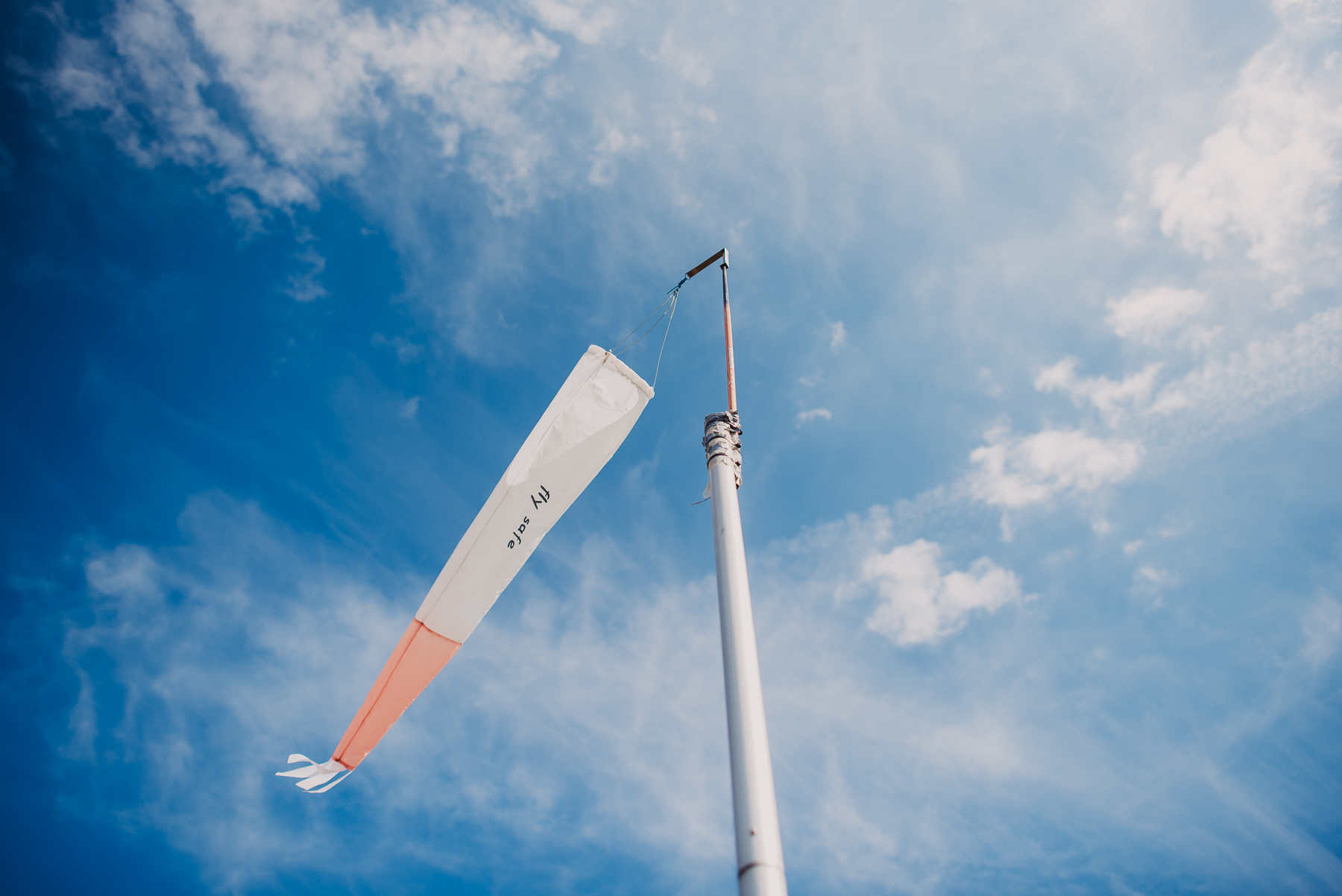 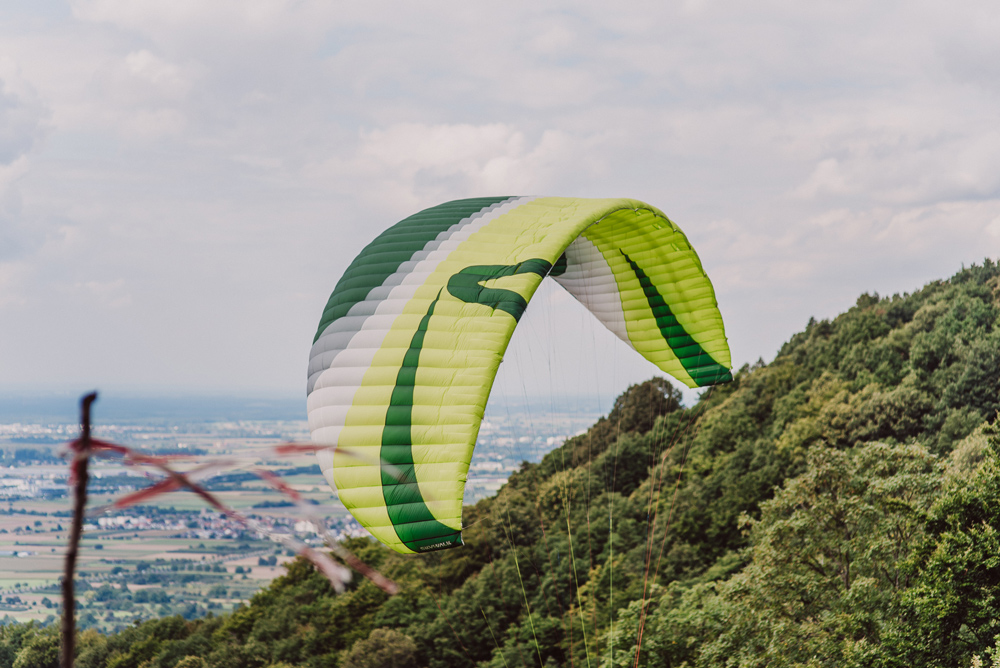 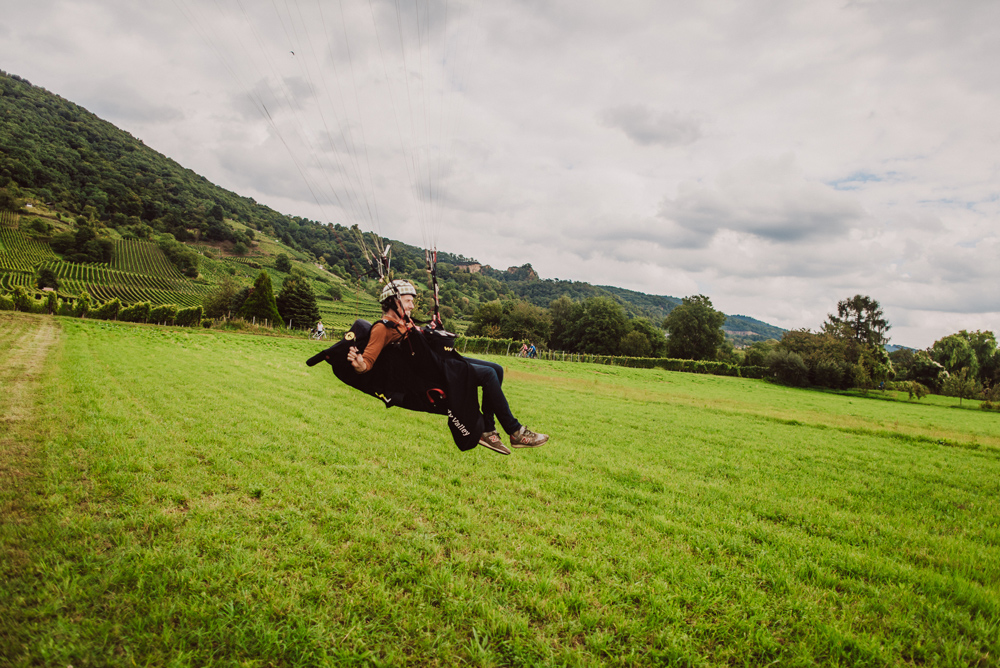 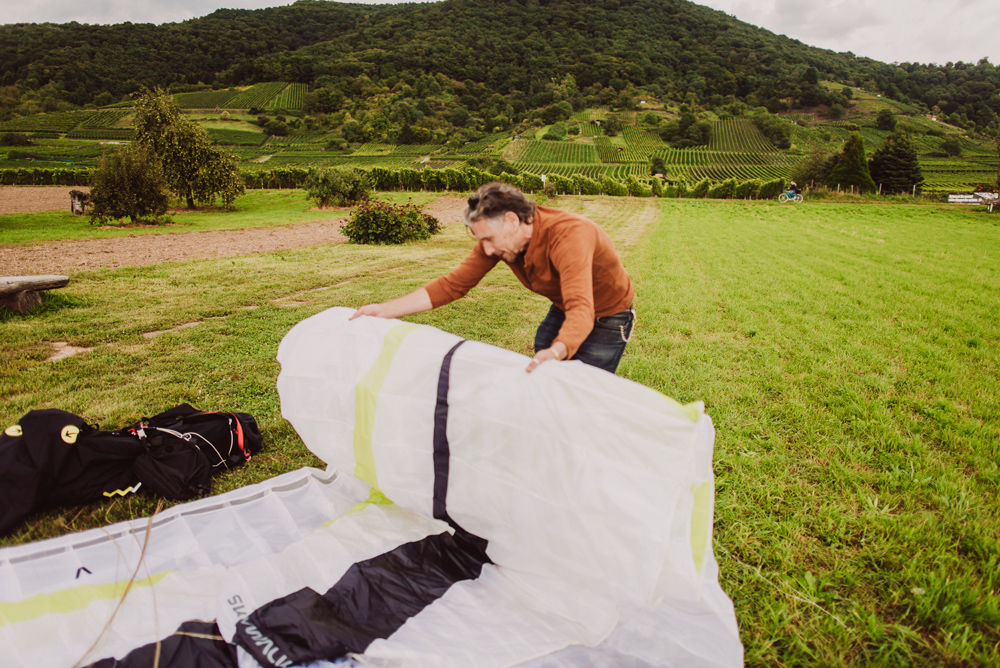 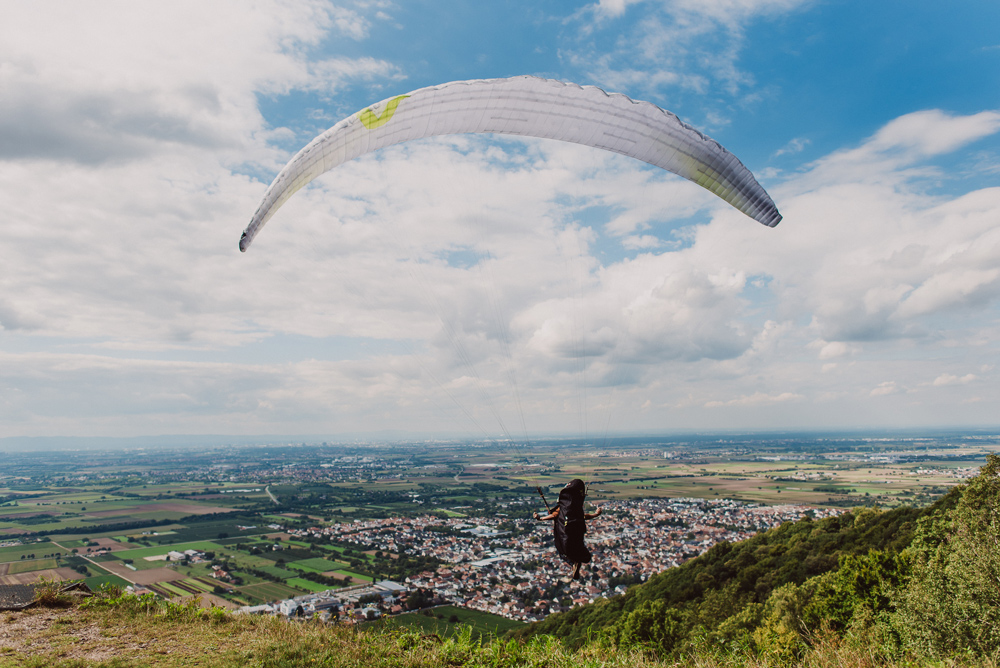